Sri Lanka seemed like the perfect add-on to our latest backpacking trip around Asia. We loved and hated India so this country seemed like a good compromise with a colourful culture, plenty of curries but way less crowds. So we flew from Myanmar to Kuala Lumpar, waited 8 long hours in the airport and eventually landed in Colombo at around 10pm. We crossed the road to flag down a cheap tuk tuk but before we got there a man offered us a ride in his, so we followed him to a small car park. His mouth was stained red from betel nut and he told us tuk tuks are dangerous and buses push them off the roads. It seemed like an odd thing to say just before he gave us a ride in his tuk tuk but we soon laughed when he pointed to a teeny-tiny white car “this my tuk tuk-car”. 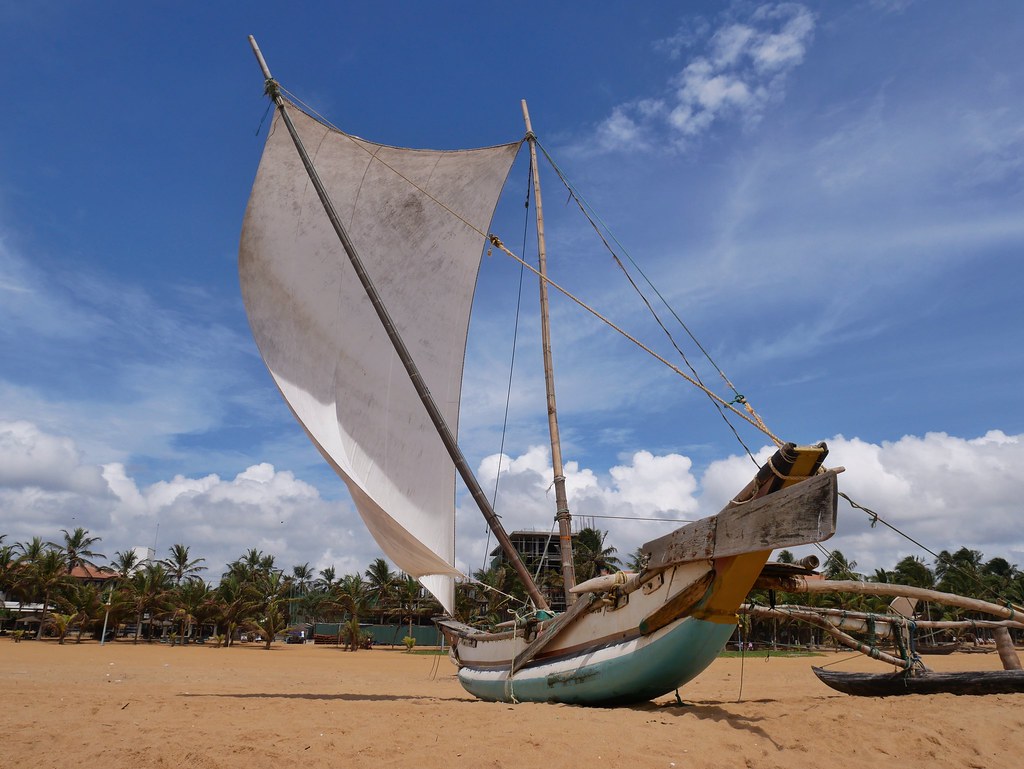 We arrived at our homestay in Negombo twenty minutes later. The place was brand new yet furnished as if it was the 70’s with ghastly patterned sofas. The friendly hosts gave us a drink each, it looked like brown sludge with funky white pieces floating in it. It didn’t taste much better, in fact it was sour and tasted off. I inquisitively asked what the drink was “iz wood apple ma’am” as if I knew what that was. The room was an absolute sauna and we had a very sweaty first night under a mosquito net that flapped from the fan. Our hosts made us a traditional Sri Lankan breakfast of egg hoppers. It’s basically a rice flour and coconut crepe with an egg inside. They were pretty tasty and reminded me of the blinis with quail eggs that my dad used to make. We decided to have a full day in Negombo to recover from our long day travelling. It was a bit of a shit beach town, but we had expected that. The sea was brown and choppy and the beach not particularly clean but there were some very unique sailing boats out in the ocean and up on the sand. Some very sweet dogs joined us for our first sunset and then we prepared to head south the following day. 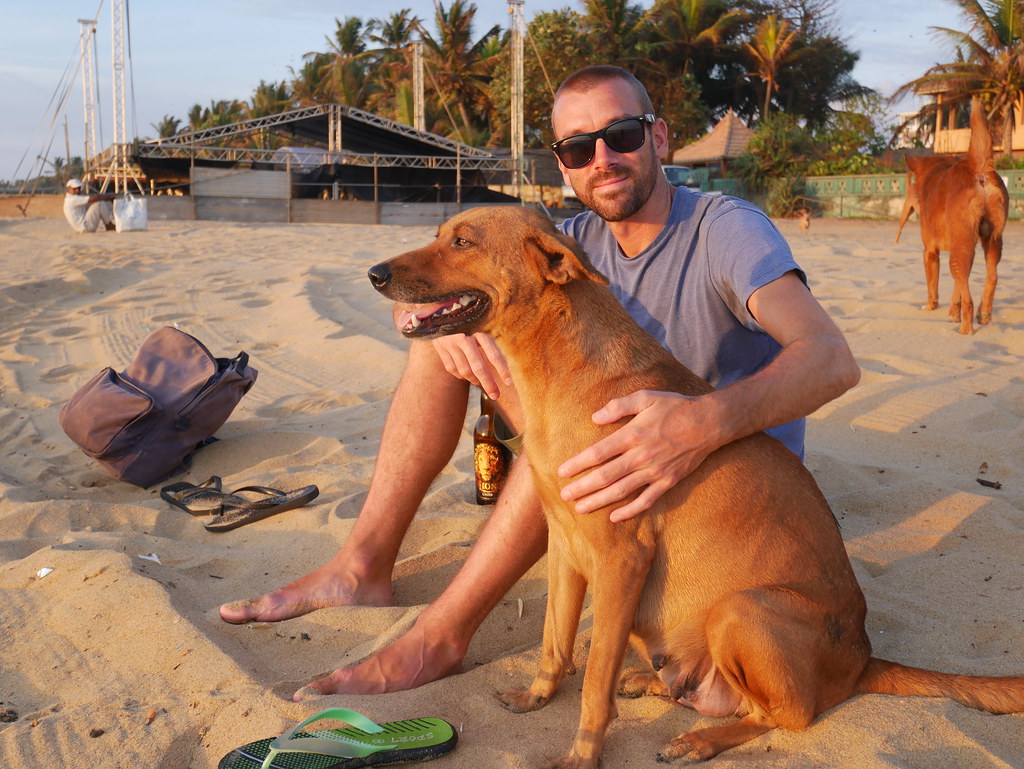 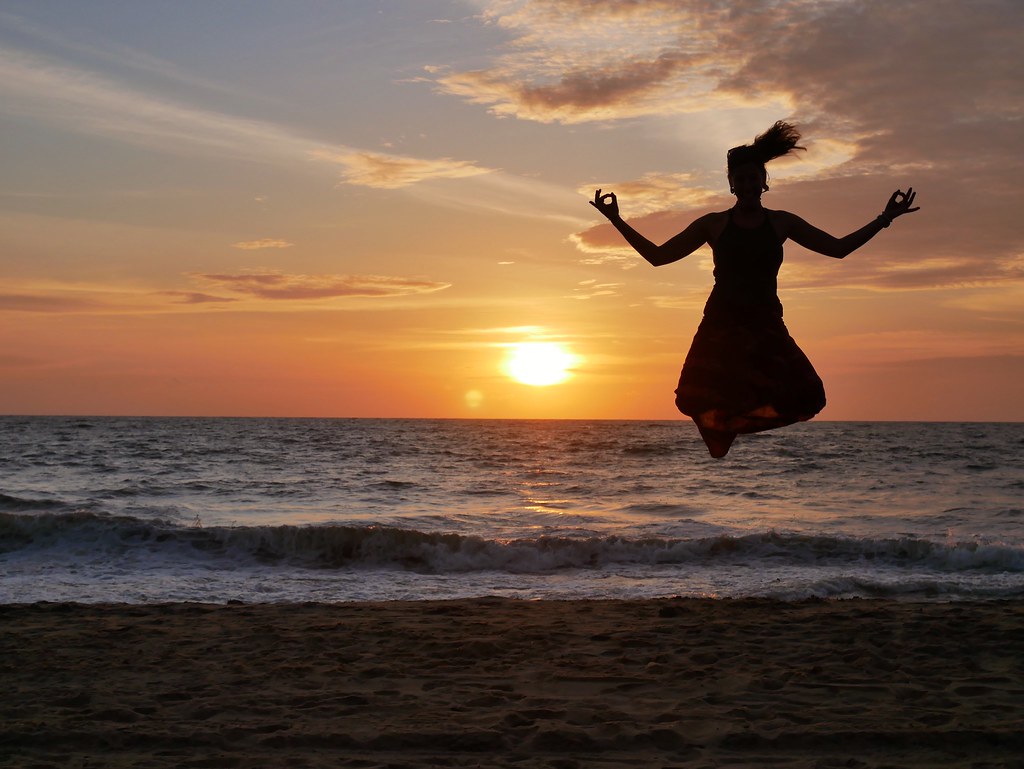 We headed to a much nicer beach town called Unnawatuna. Getting there involved a tuk tuk, a bus to Colombo, a walk to a different bus terminal, another bus to Galle and a final one to Unnawatuna and it ended up taking about 5 hours. Our hotel was pretty grimy with a dirty bathroom and questionable bed sheets. What it lacked in cleanliness though it surpassed in hospitality as the host was bloody adorable. The hotel was a five minute walk from the beach yet surrounded by jungle. Troops of langur monkeys called the jungle home and they did phenomenal jumps across the tree tops. They all donned a thin moustache which looked hilarious on the babies. Whenever they came to the trees beside our balcony our host would get really excited and tell us “monkey come now” with a jolly head wobble. 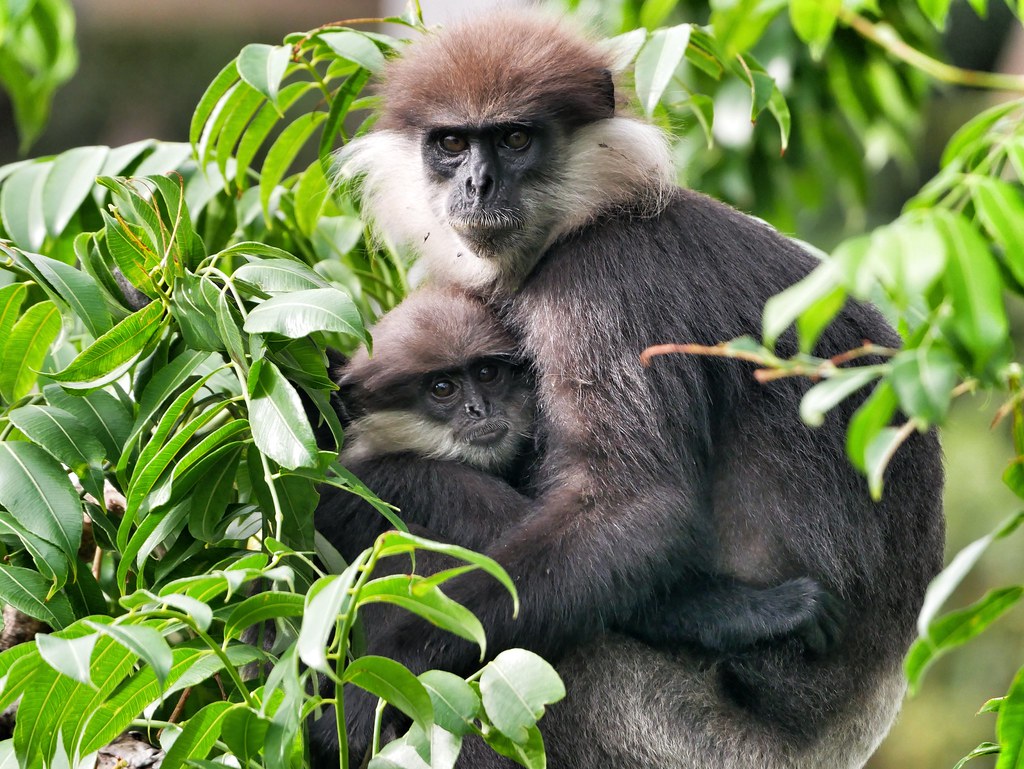 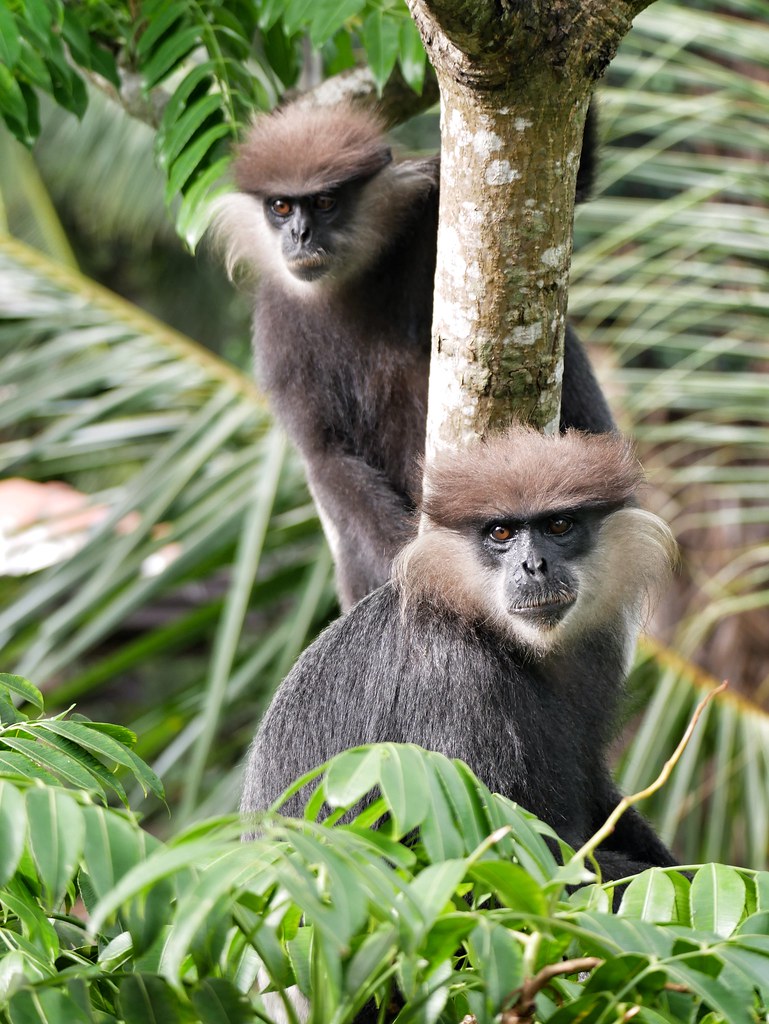 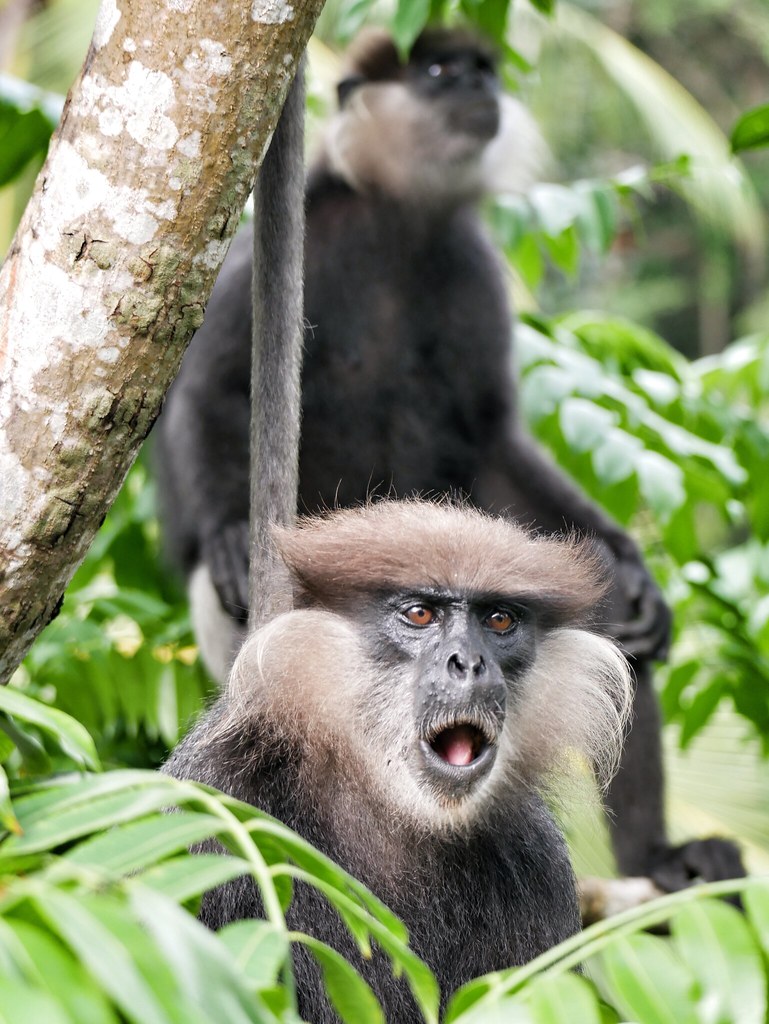 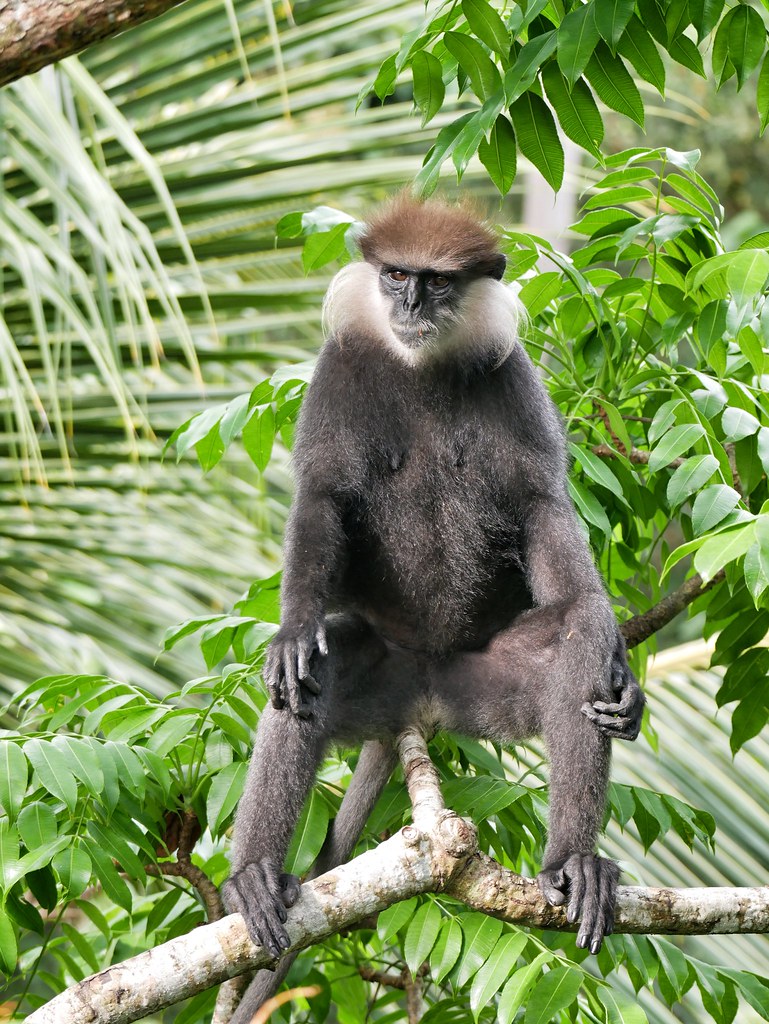 We made a beeline for the beach which was a vast curve of golden sand. Luckily we were along the western edge so it was lovely and calm for a swim. I was surprised how clear the water was and it was the perfect temperature. Sadly there were a few folks that walked along the beach with baby monkeys on leads. It was awful as they put tatty clothes on them like a circus act and steered them towards ignorant tourists who payed to get a photo. We looked at the man in disgust and even still he came towards us and veered the monkey our way so it ran across our backs. I just wanted to free the poor thing. 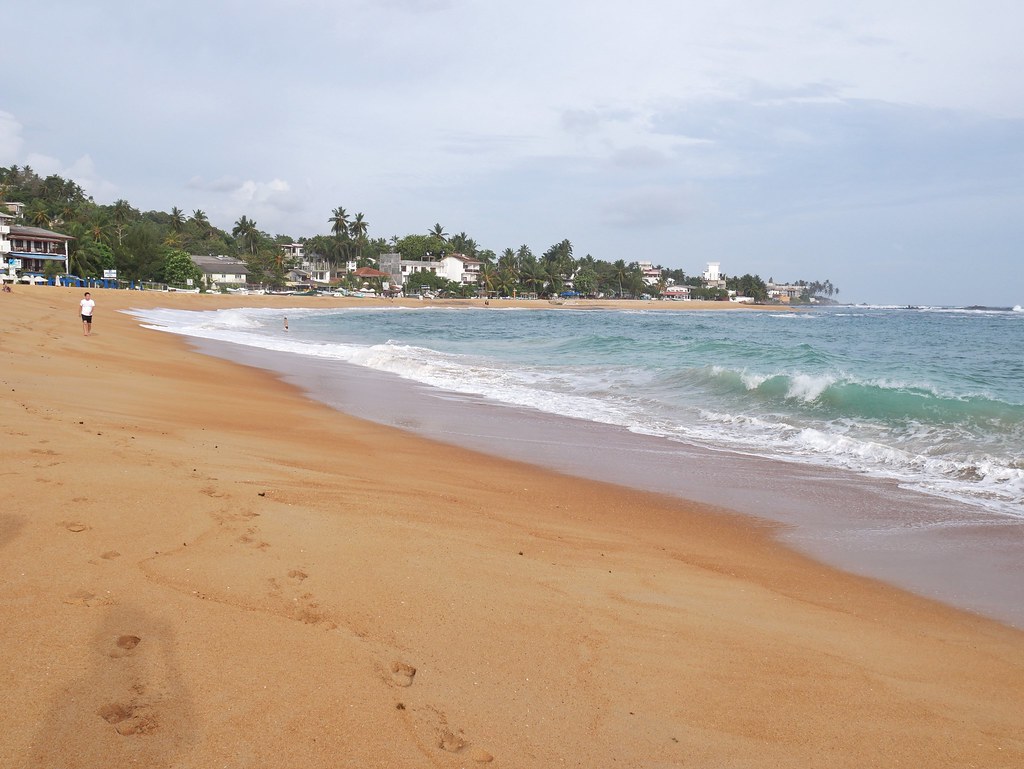 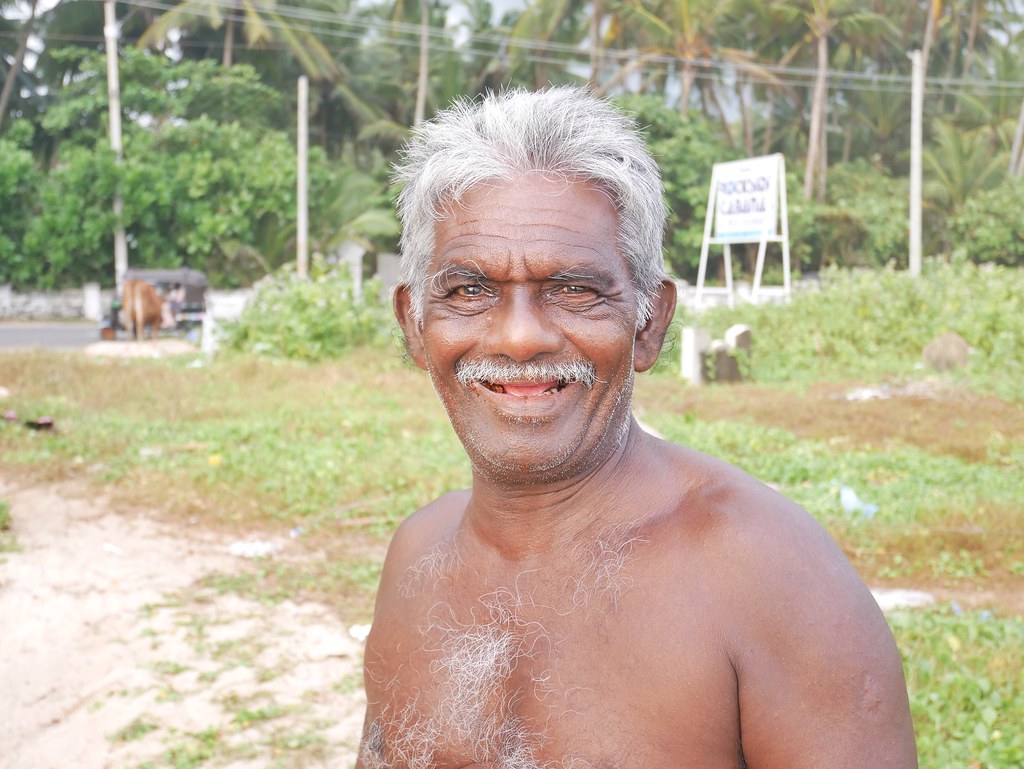 We enjoyed a few days kicking back in Unnawatuna though, one day we went to Dalawella Beach where there’s a popular rope swing. Clearly it’s become an over instagrammed place and a bar now charges you to use it. So we said hell no and just found a nice patch of sand beneath some incredible curvaceous palms and enjoyed the sunset. We also had some free entertainment watching the tourists queuing up to get their Instagram photos. It was hilarious watching the women all awkwardly posing in the same manner, with arched backs, a hand in the air and a leg flicked back, oh so natural. 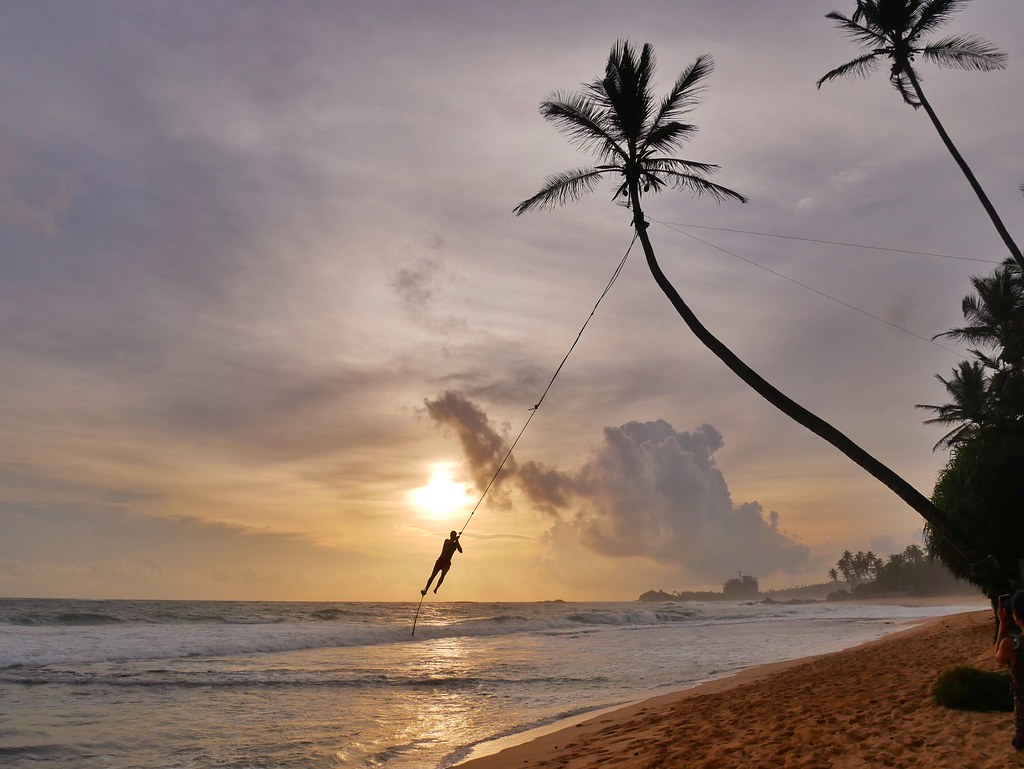 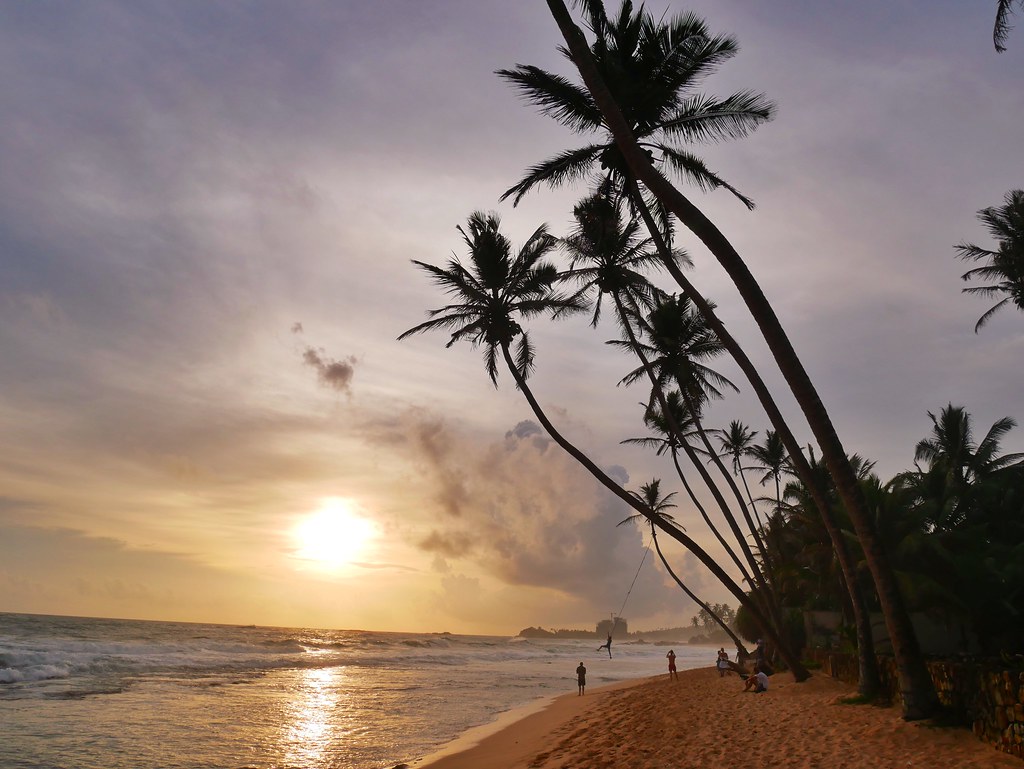 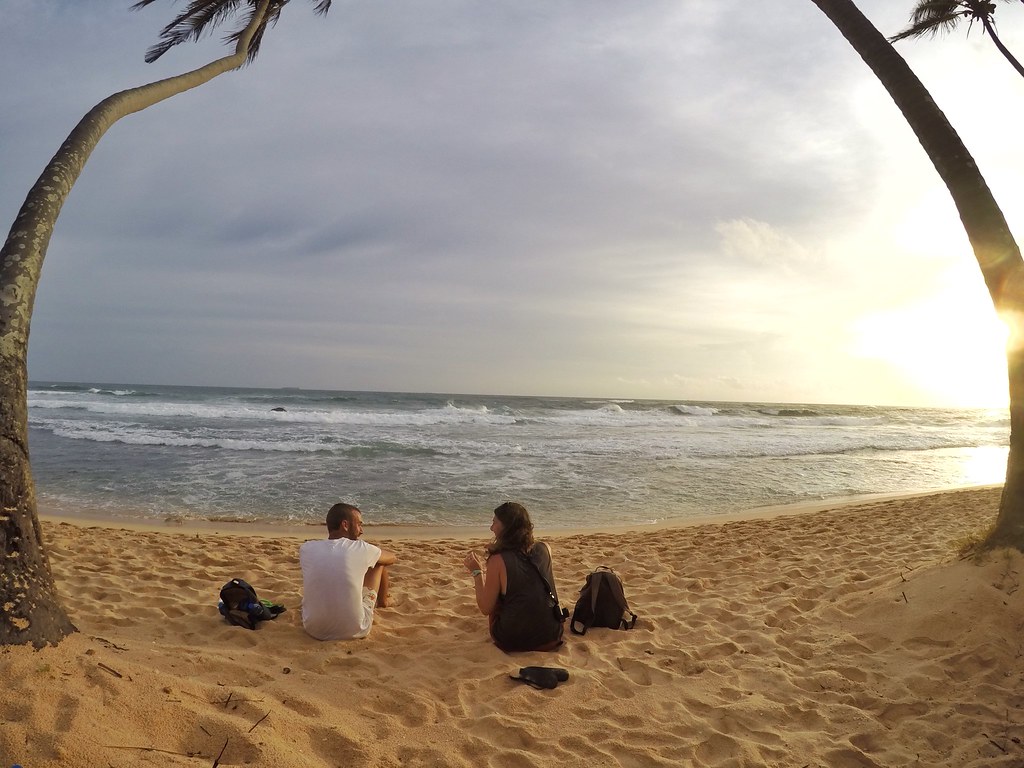 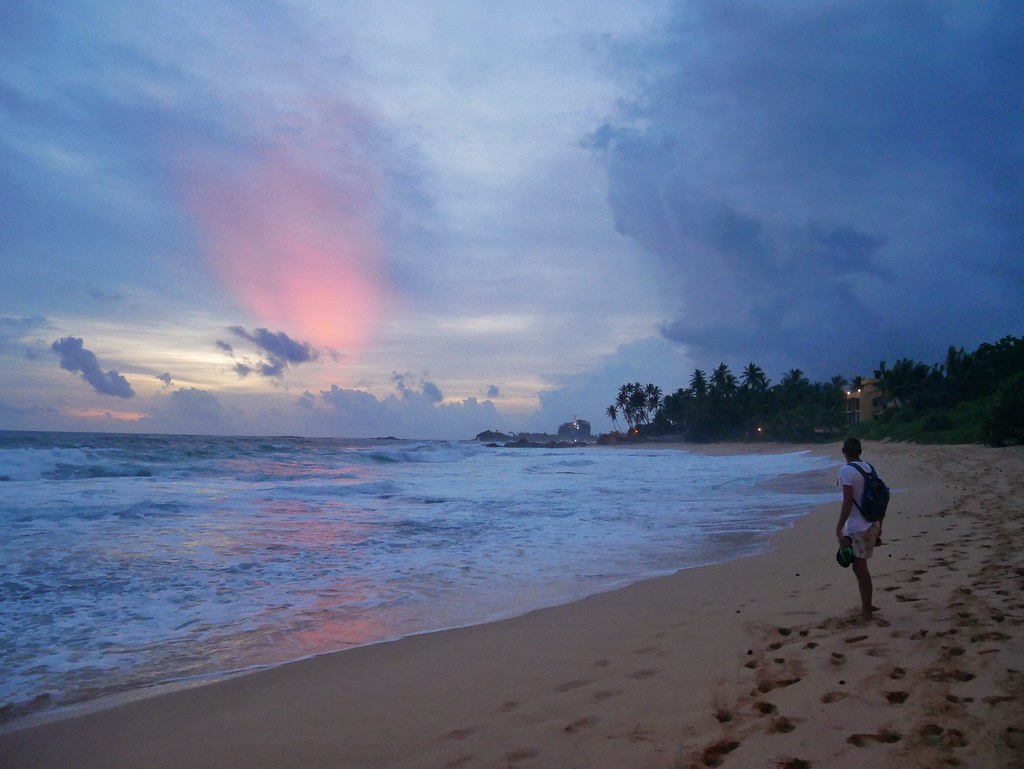 We also did a day trip to Galle which is an old walled town, originally built by the Portuguese but heavily fortified by the Dutch during the 17th century. We wanted to see the sunset from the walls so we arrived at 12ish with plenty of time to explore. It really was plenty of time and there wasn’t much to do. Luckily the place we picked for lunch was extremely slow and food took over an hour to arrive so that helped kill the time. It was a nice place but it’s old charm just didn’t win us over. There were plenty of boutique shops but they were all priced as if they were actually in Holland. We walked along the walls, checked out the lighthouse and peered down at the beach with locals playing in the sea. Then we grabbed a big pot of tea and sat on the walls watching huge waves crash against rocks and eventually a very anti-climatic sunset. 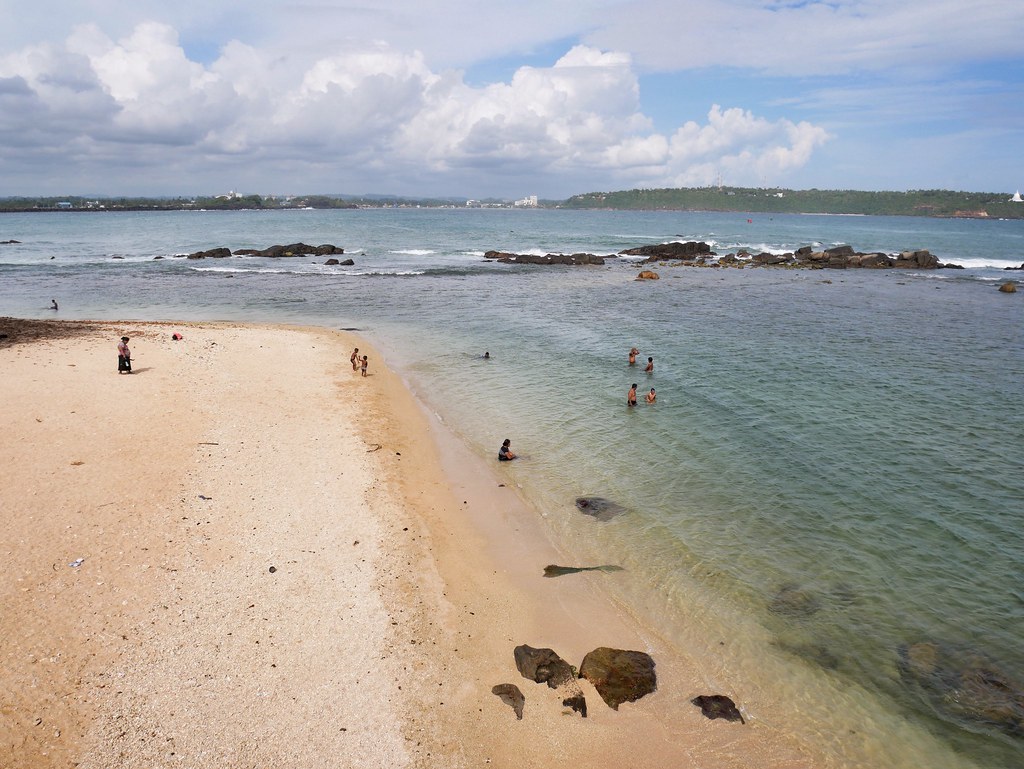 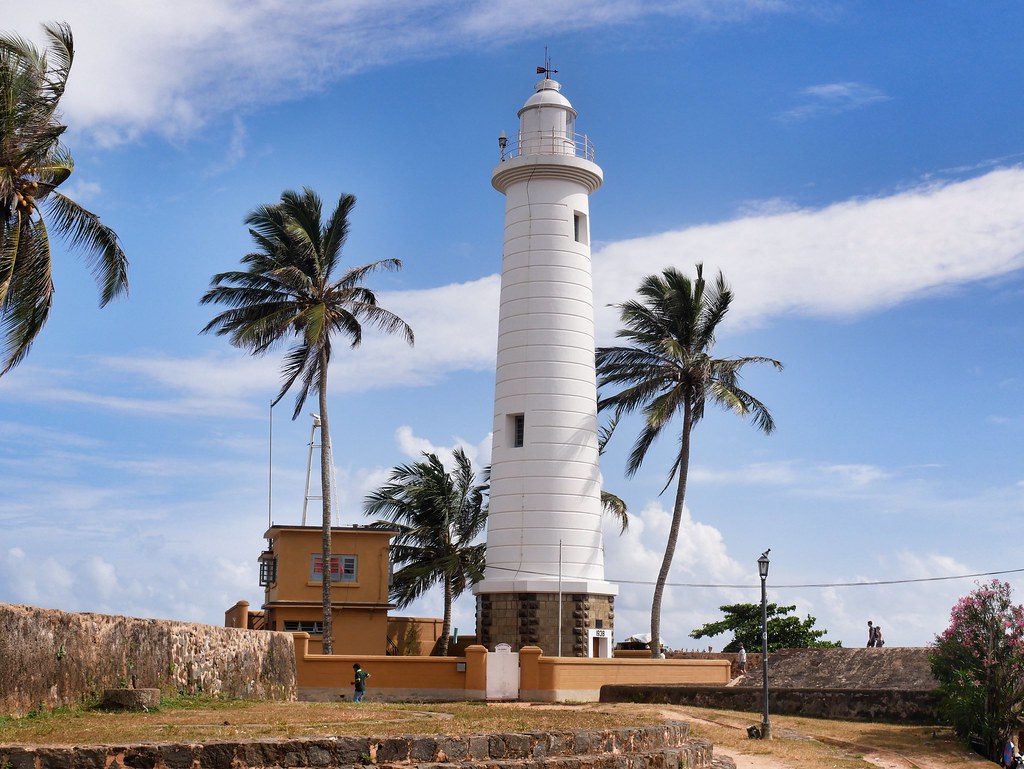 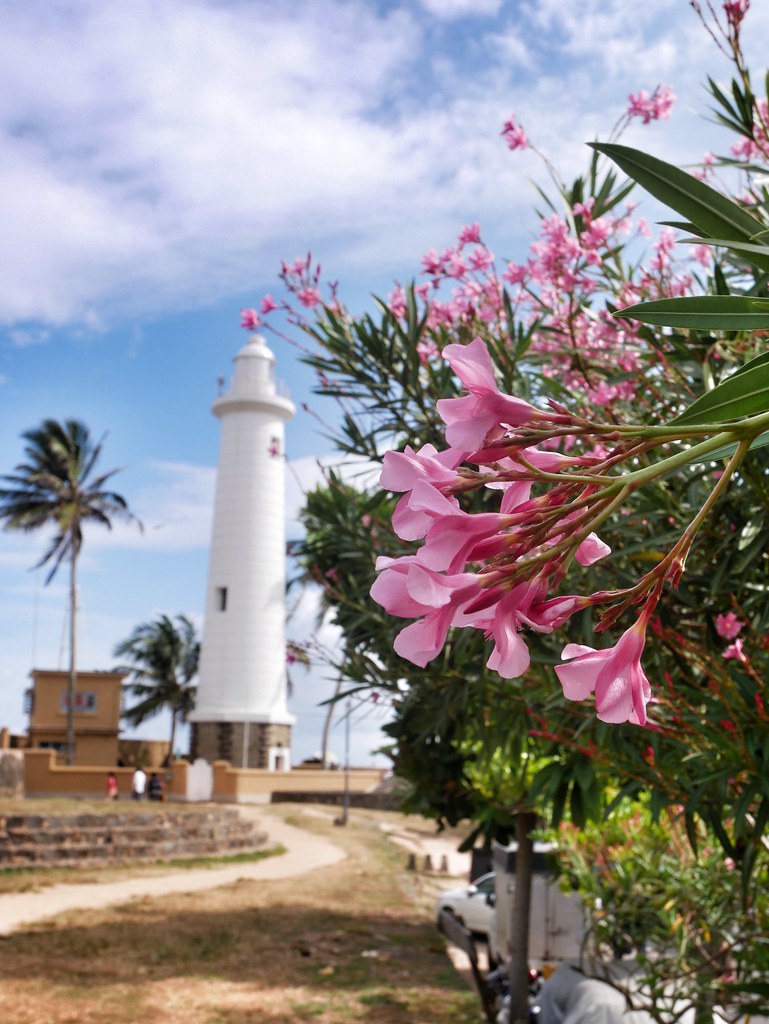 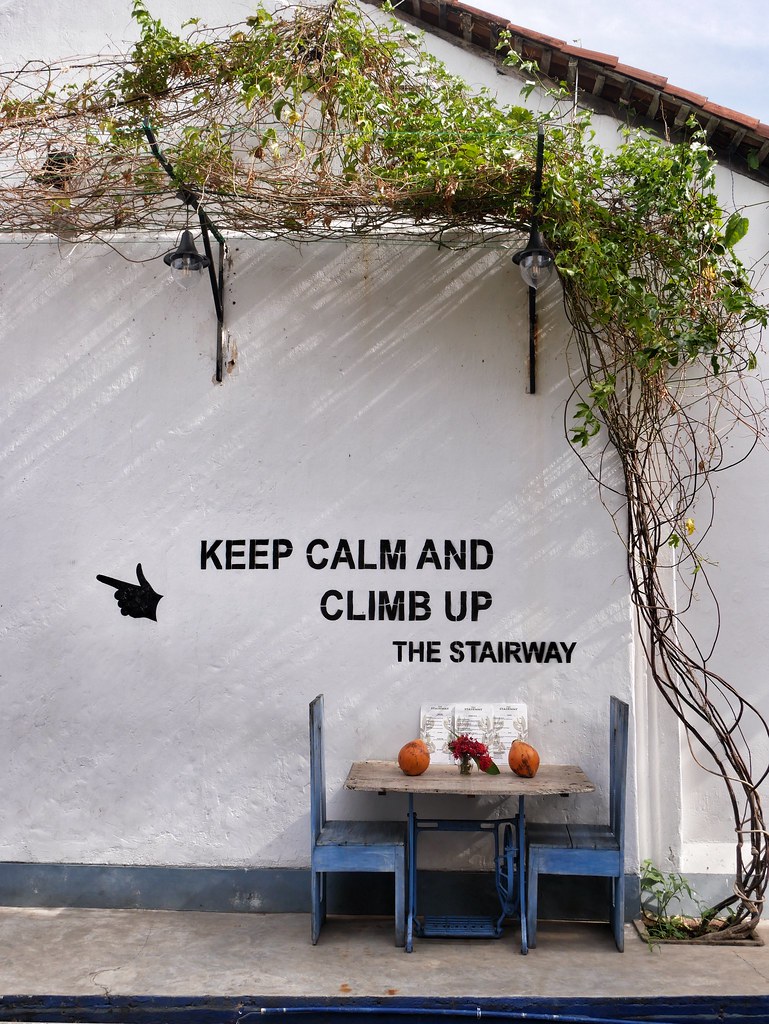 After spending a few days in Sri Lanka we quickly realised a few things, it’s not as colourful as India. The ladies mainly wear long skirts and t-shirts as appose to vibrant saris. They are mainly Buddhist here but the country is a fascinating melting pot of religions with Hindus, Christians and Muslims. It doesn’t have the eating culture like in India. Here the locals eat at home so the restaurants are mainly for tourists. This means they barely have any street stalls and most disappointedly no tea stalls. A cup of tea here costs about 50 cents but in India it was only 15 cents. Also they have a similar curry meal to an Indian thali but here it’s very wasteful. In India it’s all you can eat, a man comes around and dollops a variety of curries, chutney, rice and curd on your plate and you just ask for more when you need it. But here your given about 5 bowls of curry and some coconut sambar. It’s enough for two people but the problem is we don’t find it that tasty. The curries all taste the same, there’s always daal, pumpkin, green beans, beetroot and potato and every curry is a watery texture with the same flavour as the last. Their not thick and creamy like India and there’s no savoury curd, saying that the yogurt they sell in the shops is delicious and sweet with a texture like an expensive panna cotta . So we were a little disappointed with the food but on the plus side the people are very friendly, it’s way less crowded and the men seem less pervy, hooray. 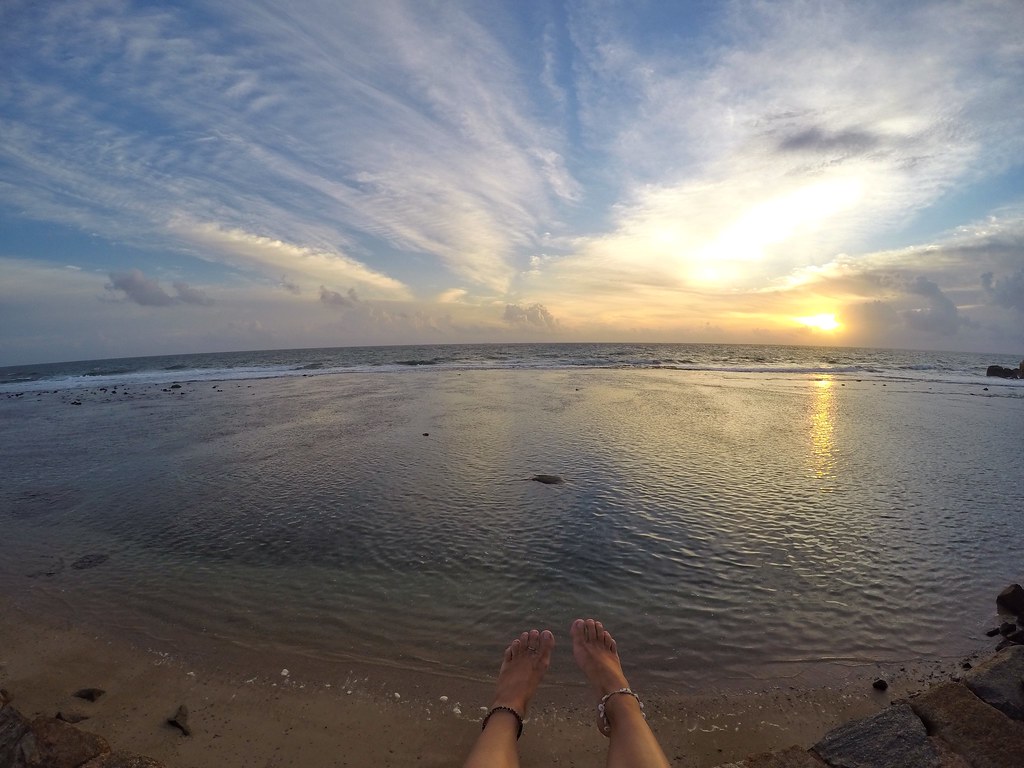 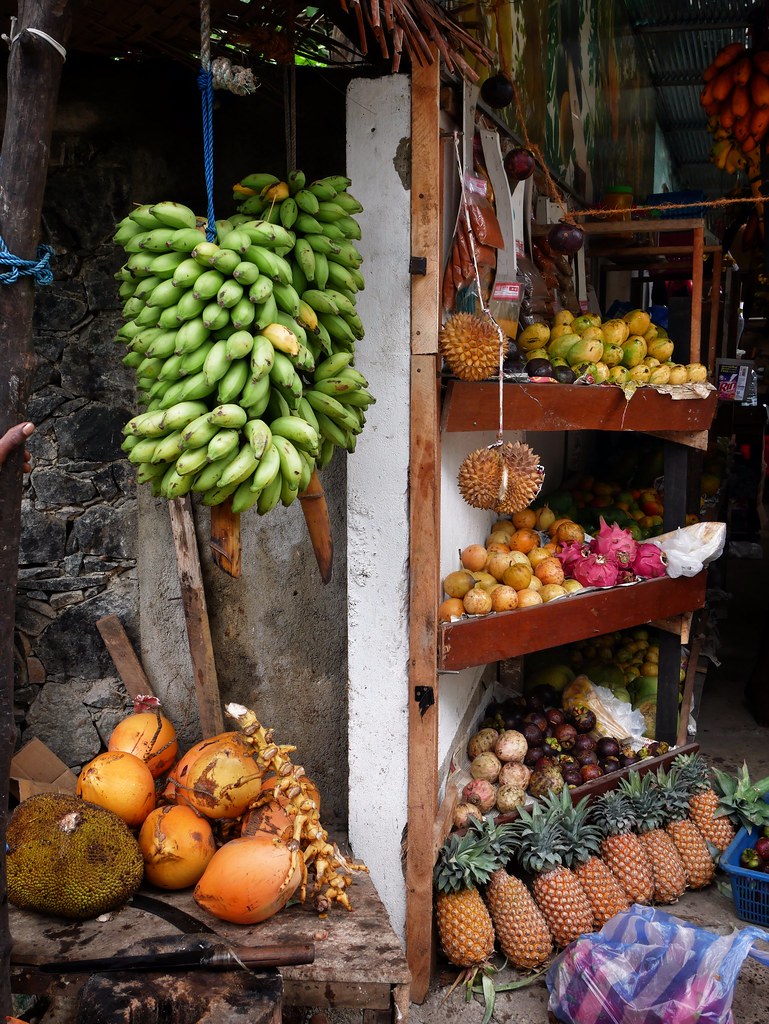