One thing we hadn’t expected to see in Central Asia was red rock deserts but we were treated to a beautiful display along the southern shores of Issyk Kul Lake. We’d seen the desert as we drove to the ethnic festival and decided we had to come back and explore more of the area so we based ourselves at a sweet homestay in the tiny village of Kadzhi Say. The ground was covered in burnt orange dust from the surrounding desert and cherry trees gave us a shaded area to rest in the garden. A short stroll past affectionate puppies led us to the crystal clear shores of Issyk Kul which was ideal for swimming. The lake is so big that it almost looks like the sea and on a windy day it can have white-caps and crashing waves. But first the desert was calling so we caught a marshrutka to Fairy Tale Canyon (Chazka in Russian). A hot 2km walk led us to the main area where we left the other tourists and wandered along some colourful canyons. 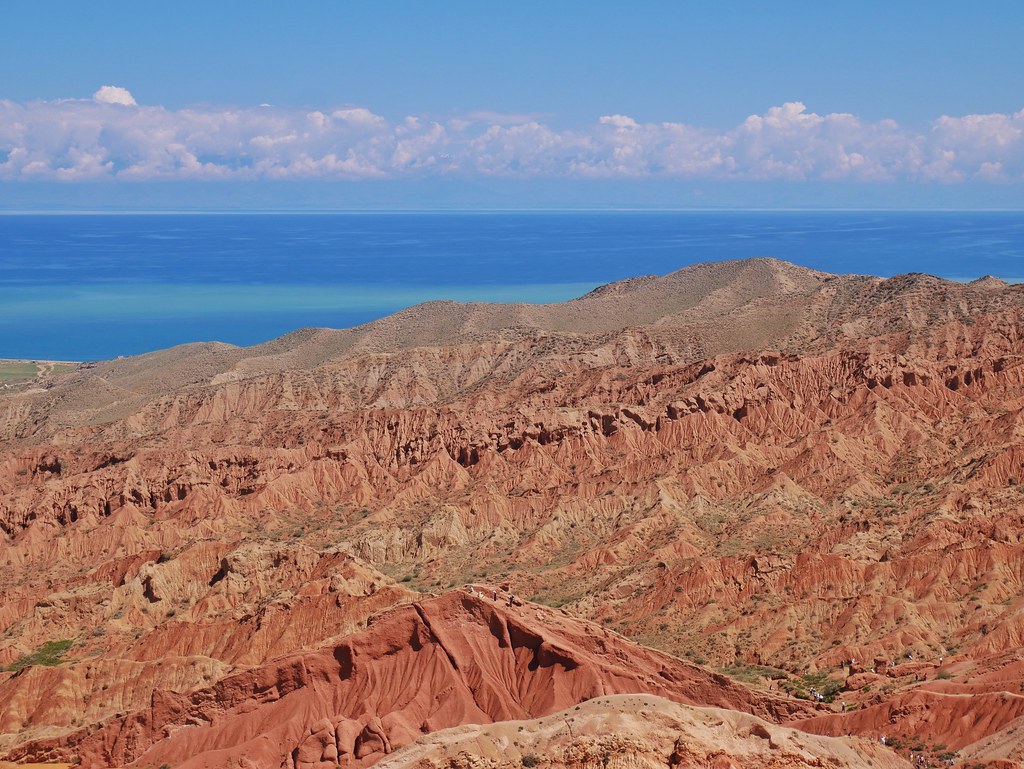 With sweat dripping down our backs we made the short climb uphill to the most incredible viewpoint looking across the multicoloured desert. There was layer upon layer of terracotta, orange and ochre coloured rocks leading all the way down to the deep blue shores of Issyk Kul Lake. 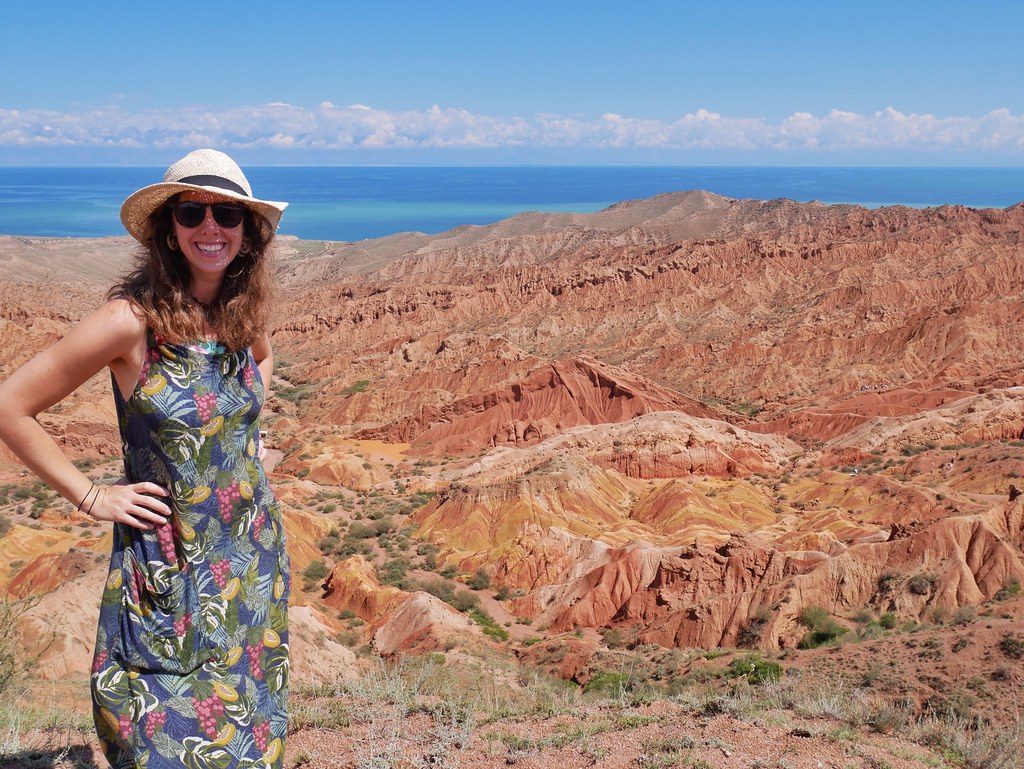 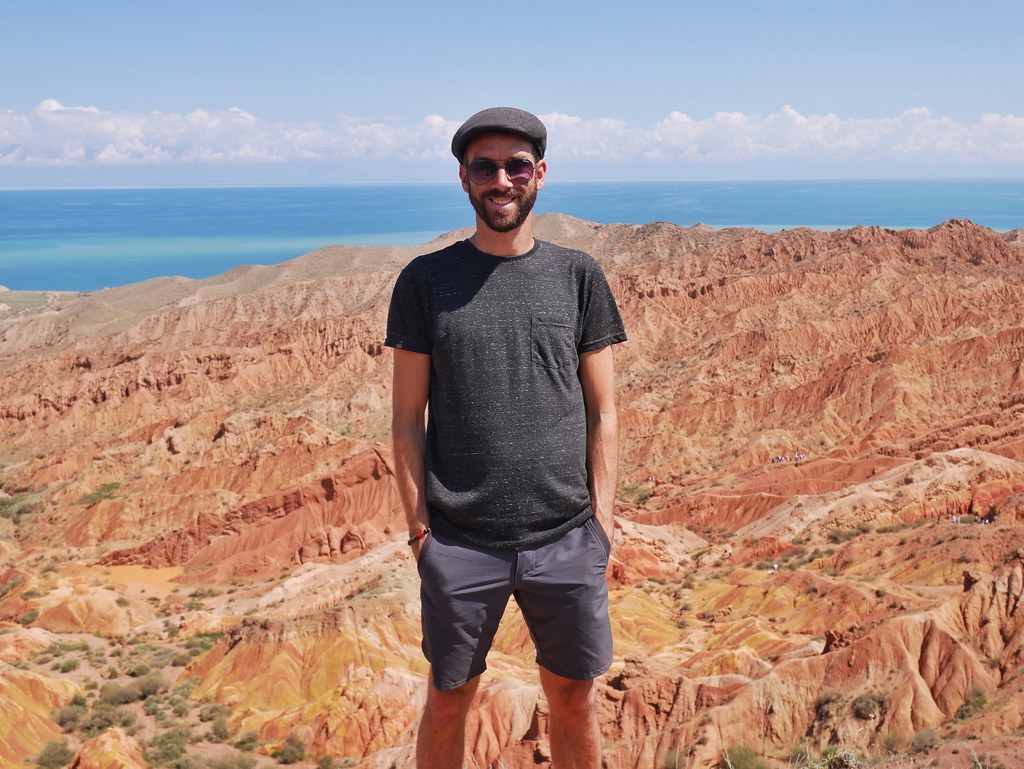 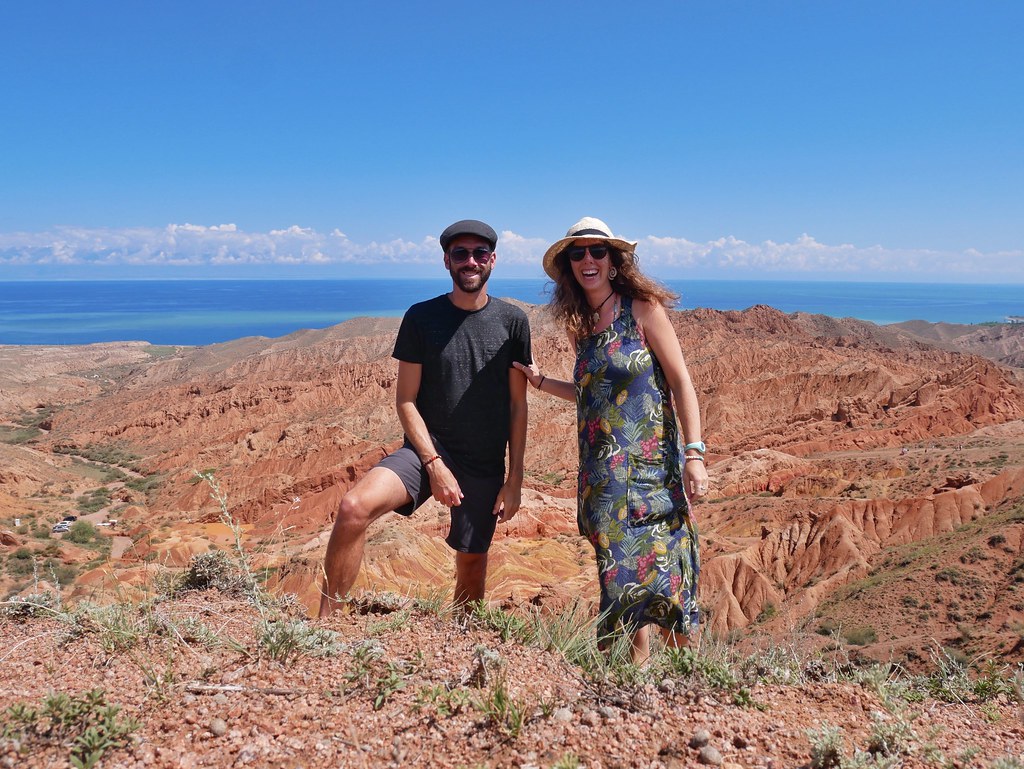 After getting the high vantage point we decided to head back down to walk amongst the canyons and bizarre rock formations. Trails meandered through the canyons and we climbed up narrow sections and slid back down on naturally made slides. We passed little pools filled with what looked like orange and chocolate flavoured milkshake and it was perfectly calm so the rocks were all reflected in it. The place wasn’t quite Utah but it was certainly a special sight in Kyrgyzstan. 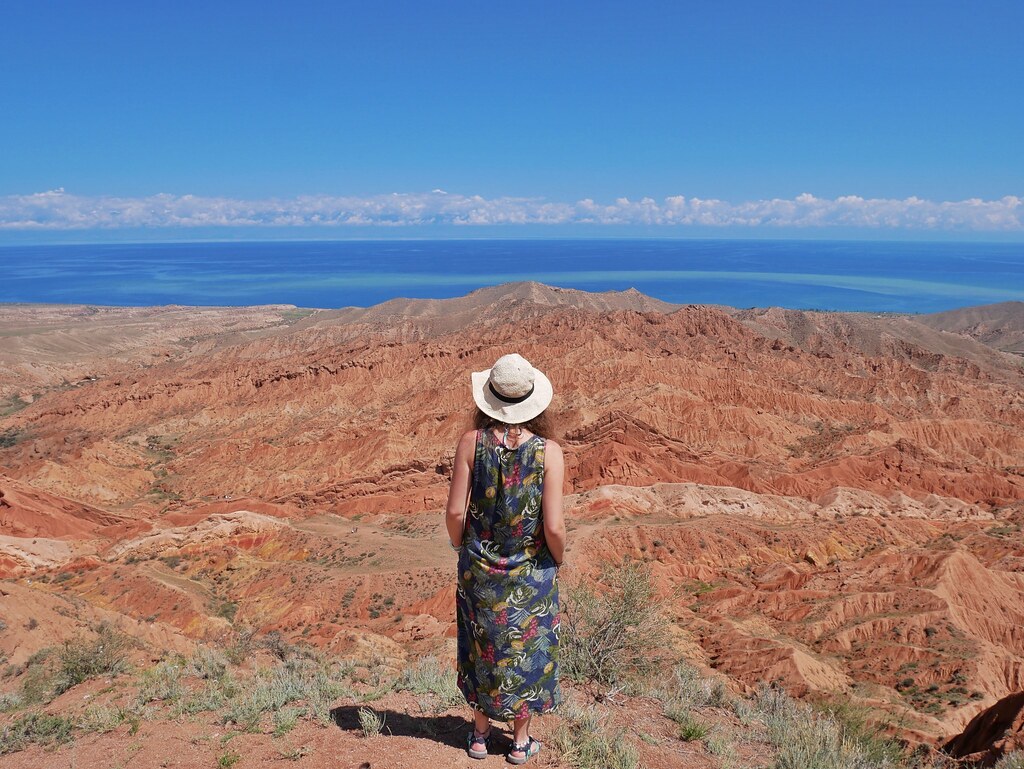 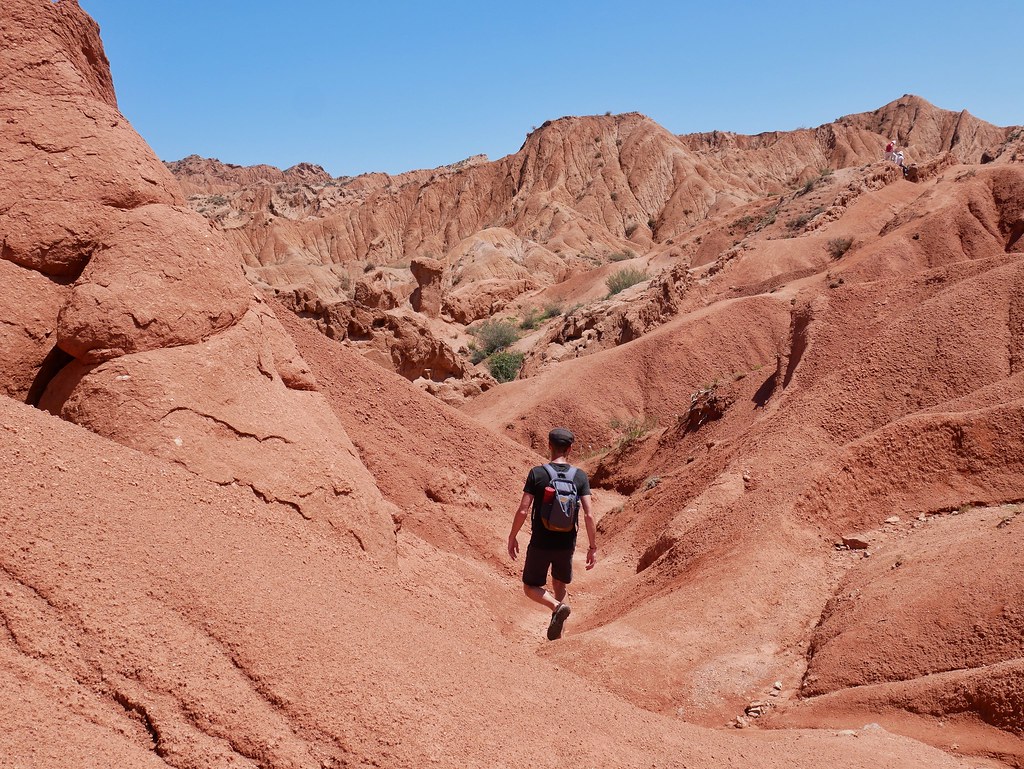 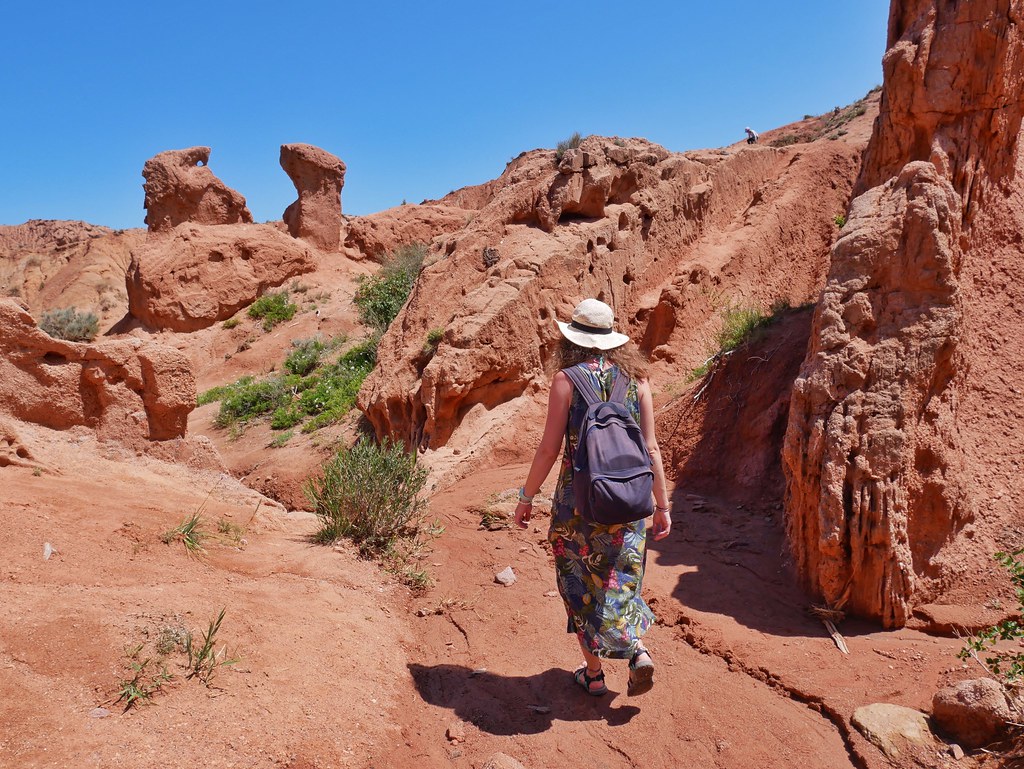 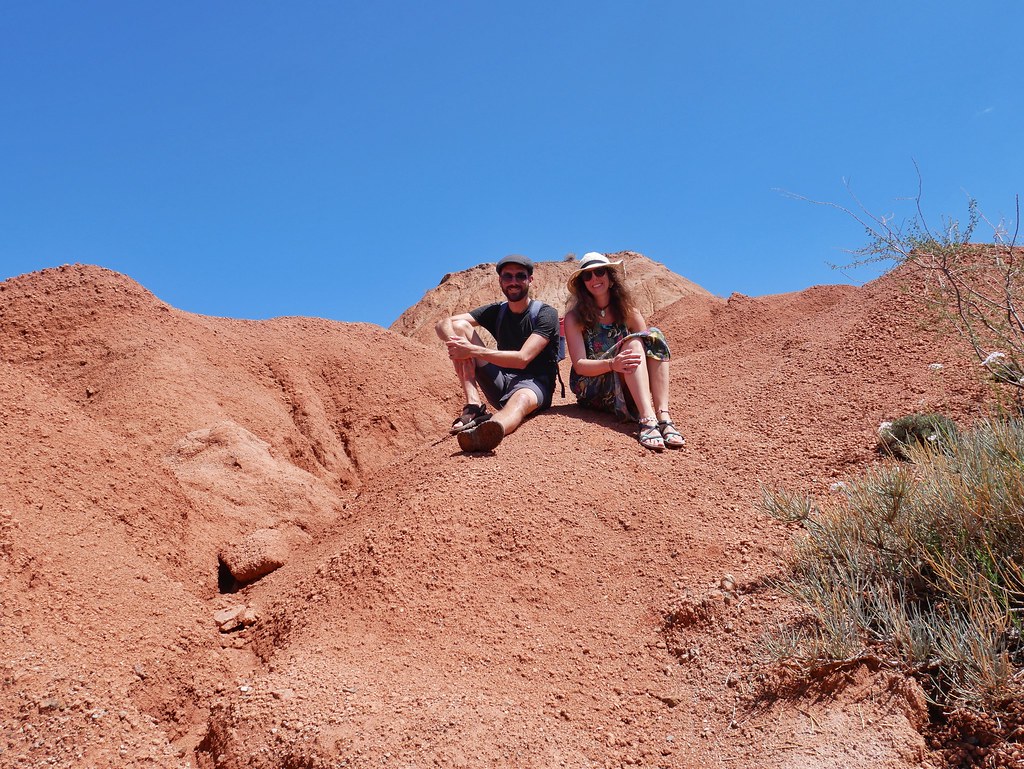 The heat was intense though and there was no wind whatsoever so we packed up and headed for the glistening lake. A massive stretch of pebble and gravel beach was completely empty so we laid out my sarong and spent a few hours sunbathing and dipping in the cool water. A gentle breeze picked up and the sound of the waves lapping against the shore caused us to drift into a brief sleep and wake up with very red bodies. We must’ve looked a state when we walked back up to the road and stuck our thumbs out for a ride back to the village. 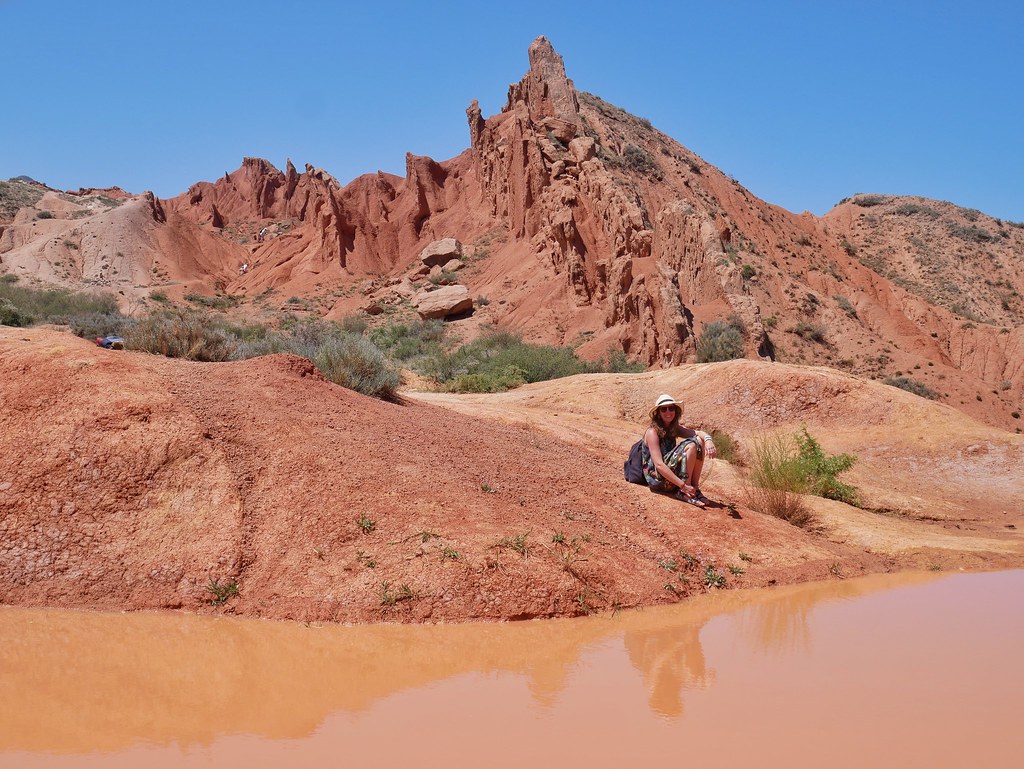 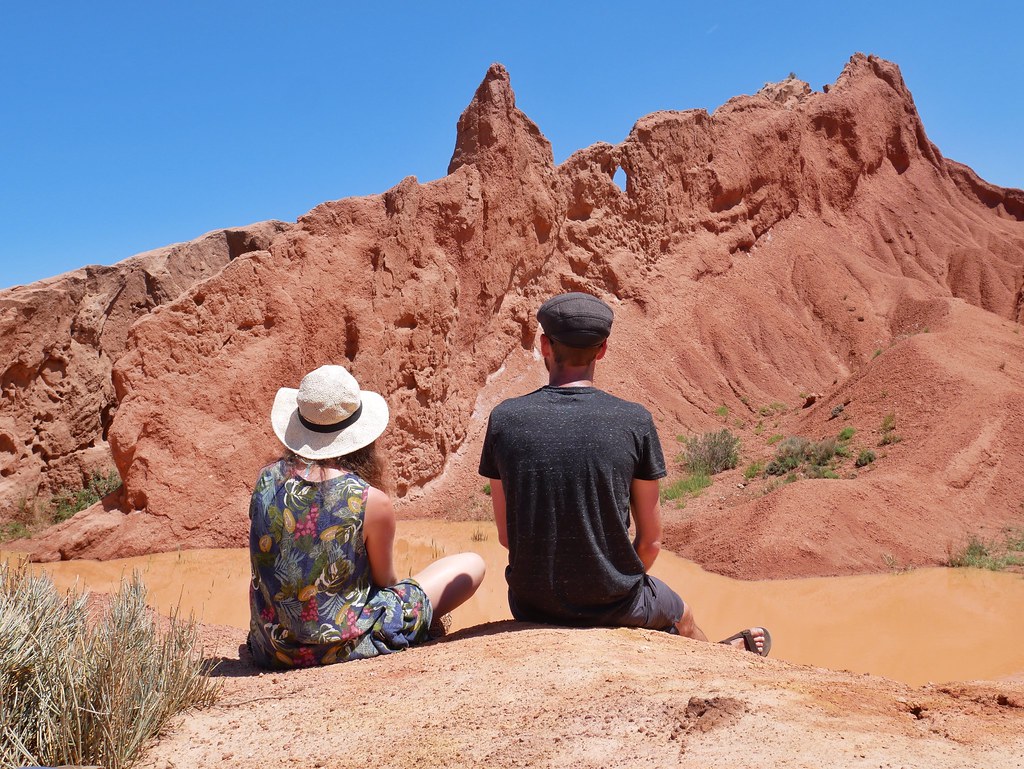 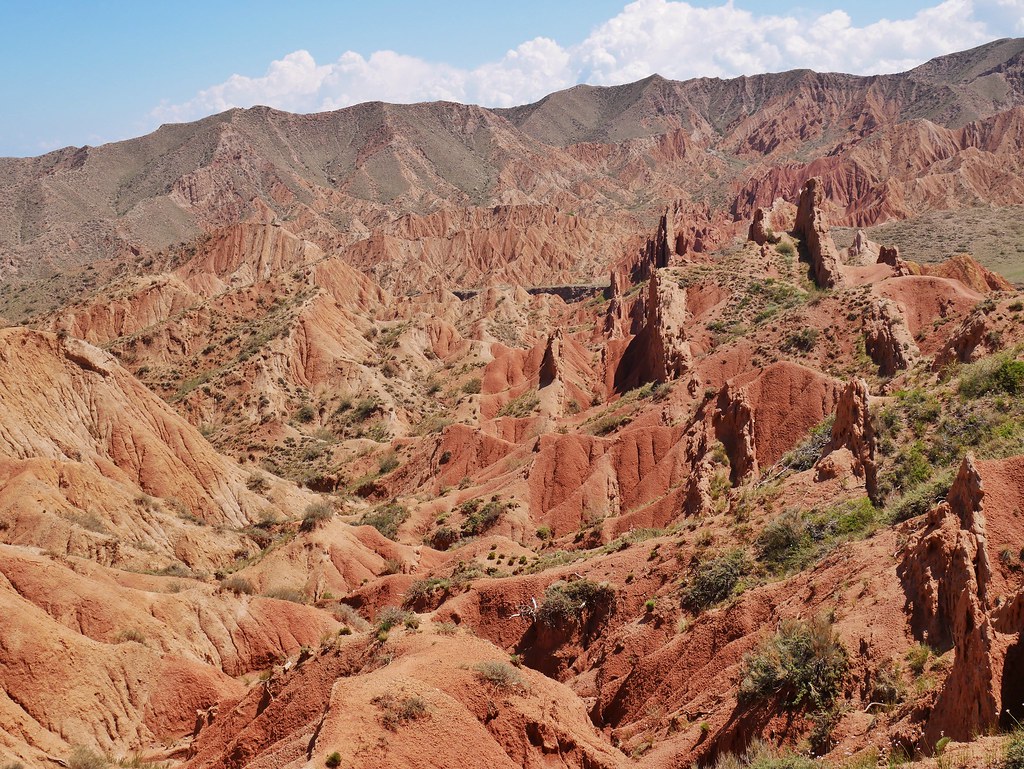 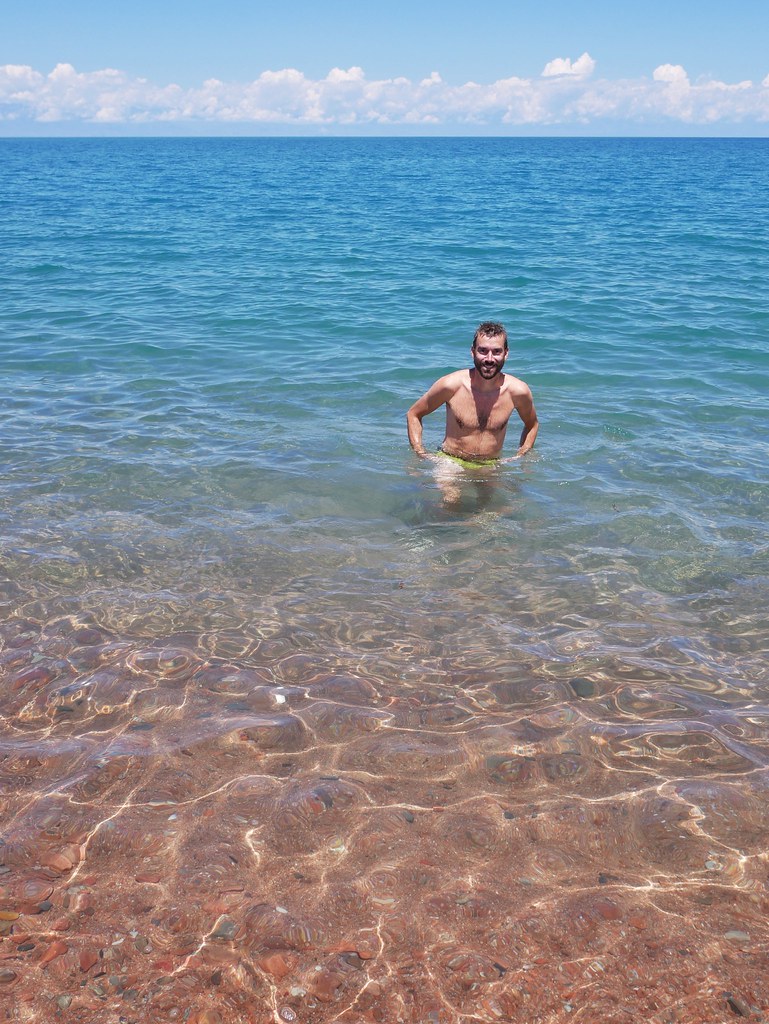 That evening a storm brewed at sunset and from our window we watched the sky turn a menacing black colour. The sun was shining from behind us so the rocks were all glowing a vibrant red colour and we were treated to an incredible rainbow. There was so much colour and beauty in one tiny spot. 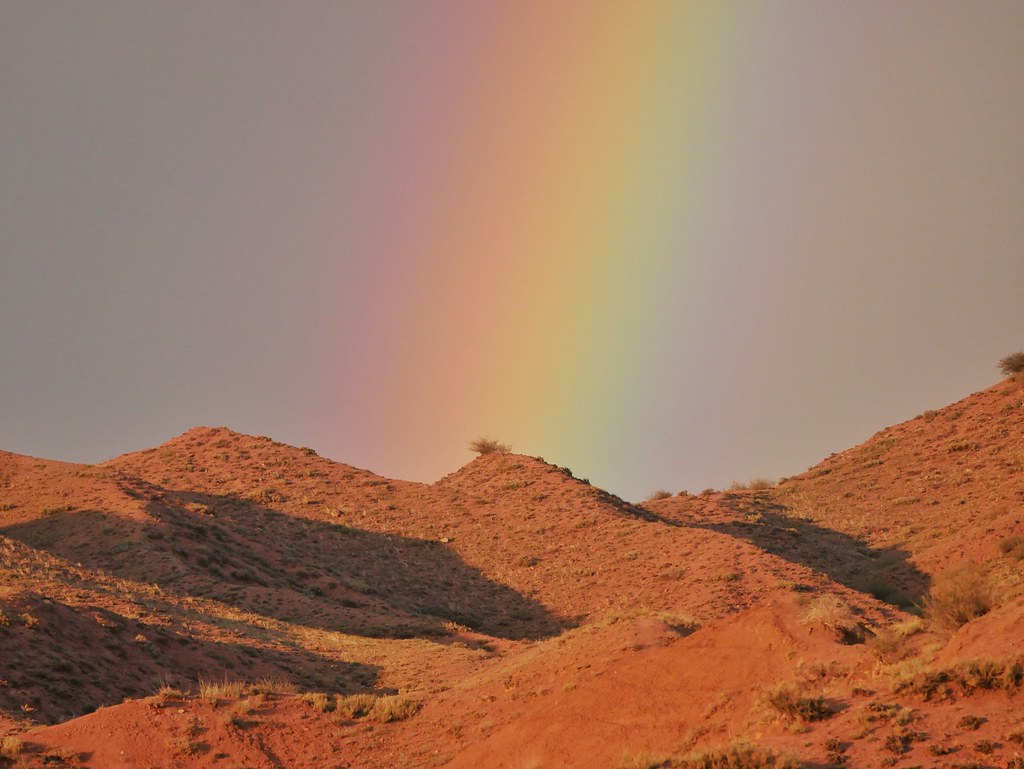 We also checked out some other red rock formations while in Karakol. A short trip took us to Jeti Oguz which is home to the seven bulls where 7 big mounds of red rock shoot out of the green valley. For us it wasn’t as impressive as fairy tale canyon but we still enjoyed a nice walk on each side of the valley. Green pastures were laid out between higher peaks so they were a convenient base for locals to set up their yurts during the summer months. 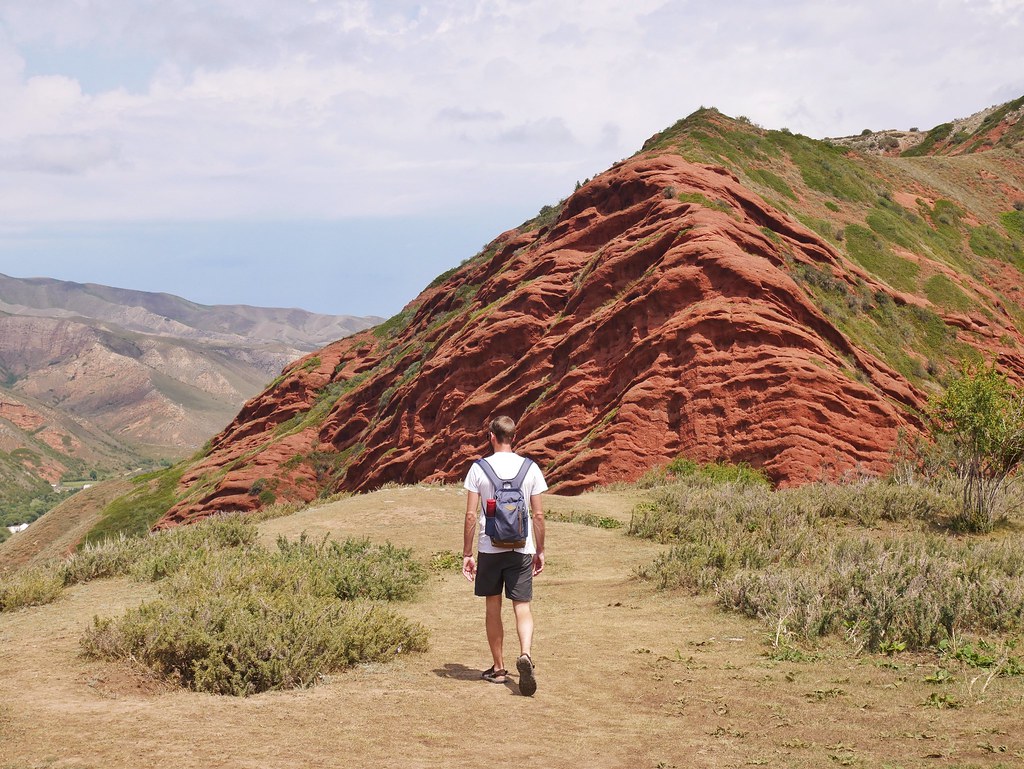 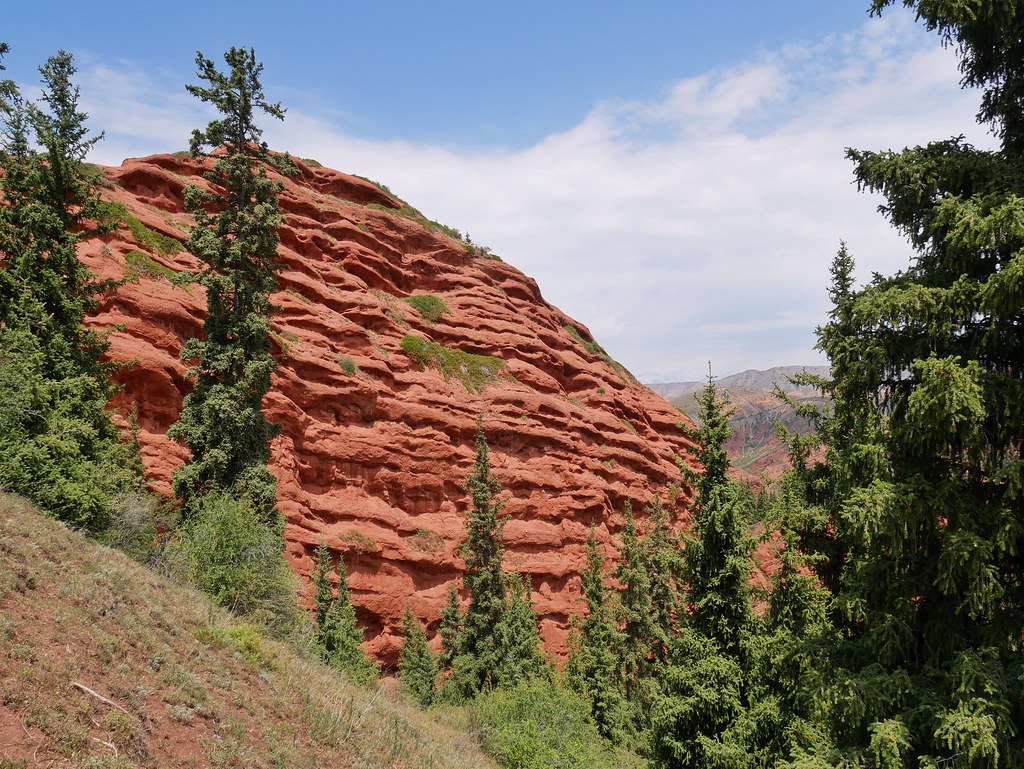 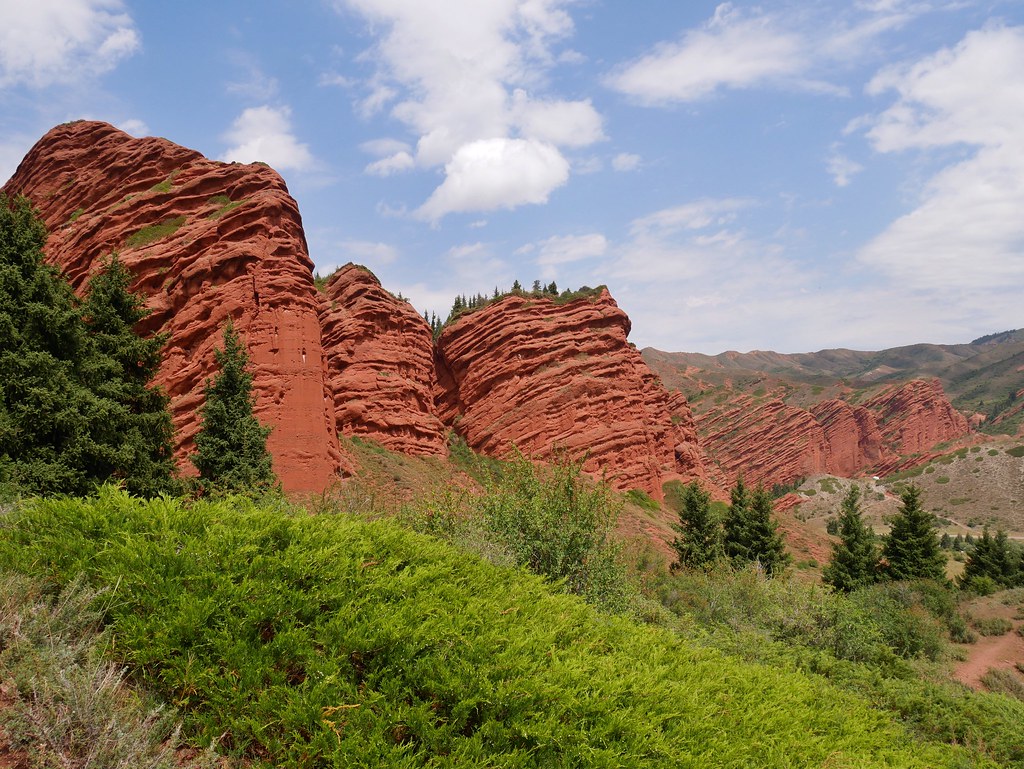 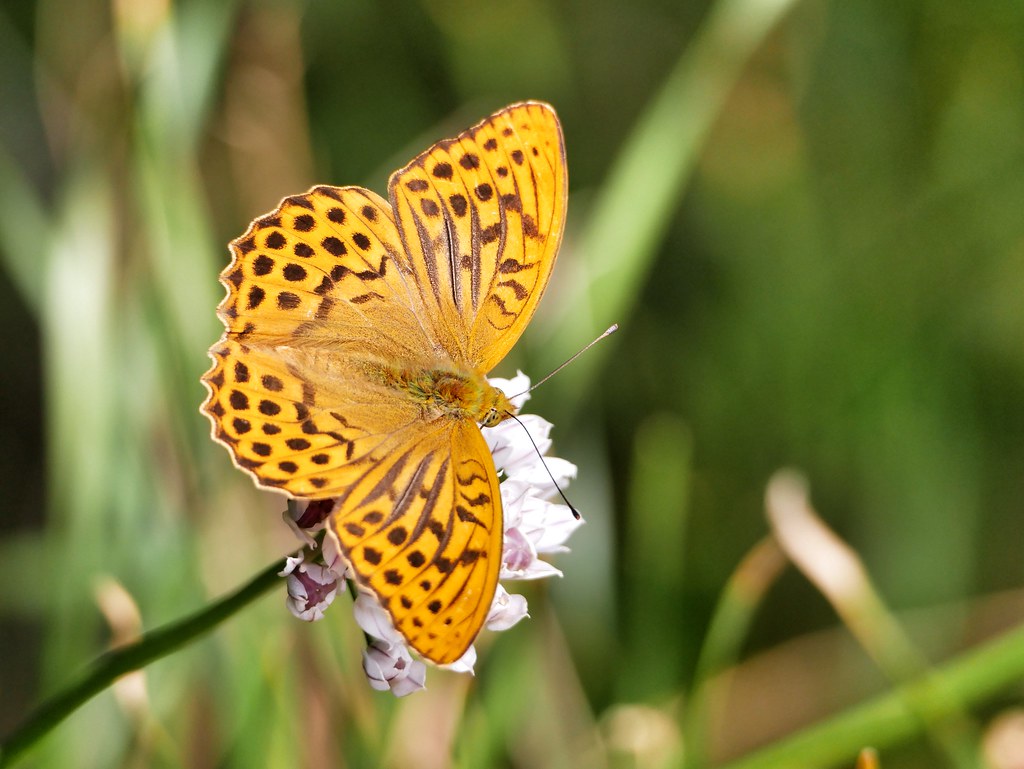 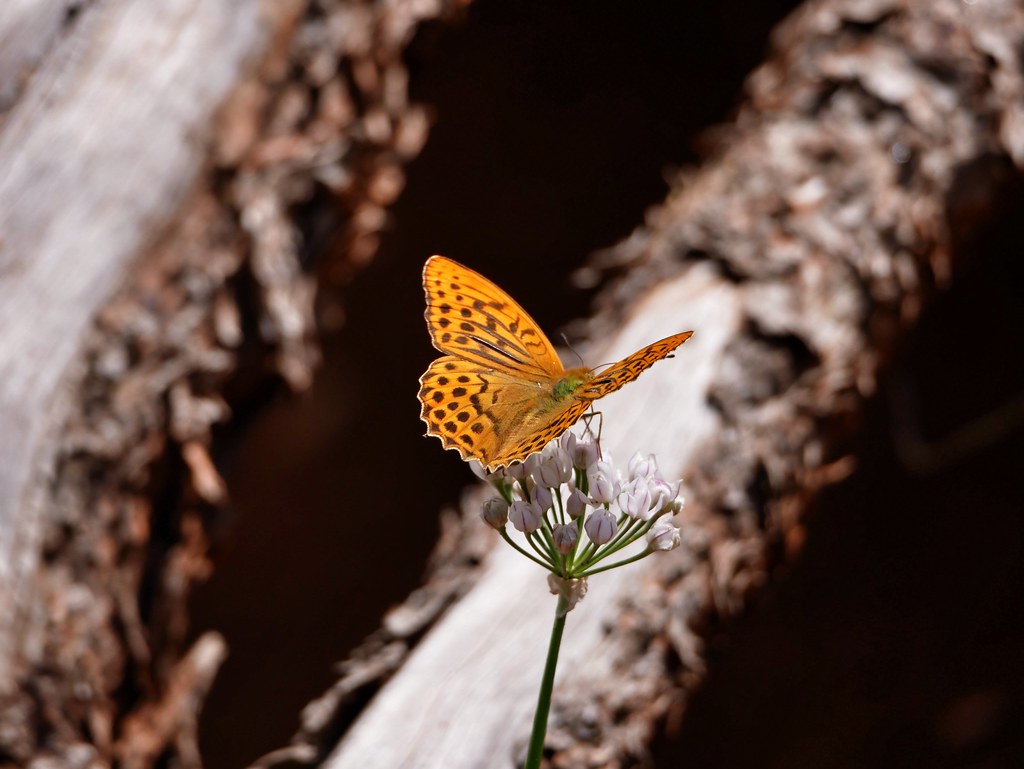