We knew we’d miss the world famous Nomad Festival in Kyrgyzstan this year but as luck would have it, a smaller ethnic festival was taking place so we jumped at the opportunity. It was set along the shores of Issyk Kul lake which is the 2nd largest alpine lake in the world and a sight to behold. We arrived in the tiny village of Tong and got the feeling that we were a day early for the festival as it was only just being set up. It was a bit of a gloomy day with a surprising chill to the air so we sat on some old tyres while locals dressed in their fanciest frocks erected marquees around us. Craig was really cold so when it began raining he was elated as he could proudly put on his poncho and stay warm. Eventually the rain stopped, the sun came out and the festival began. It was a perfect size for us as we hate crowded places and I’d guess there were only about 200 people there. 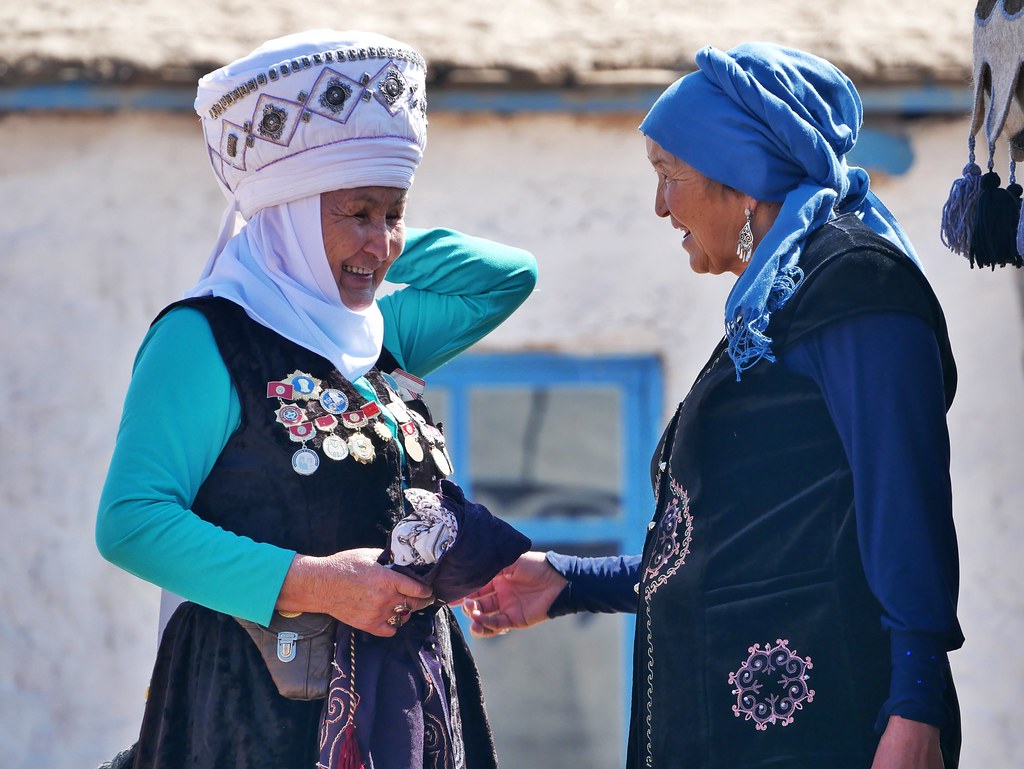 The show started with some men playing traditional Kyrgyzstan music on locally made guitars and flutes. We were free to sit and listen or walk about so we took a little stroll around the area. A few older ladies were wearing turban-style head pieces while the men had tall black and white felt hats on. Four young girls continuously went in and out of a yurt to do costume changes and occasional dance practices which was extremely photogenic with the desert background and low lying clouds. 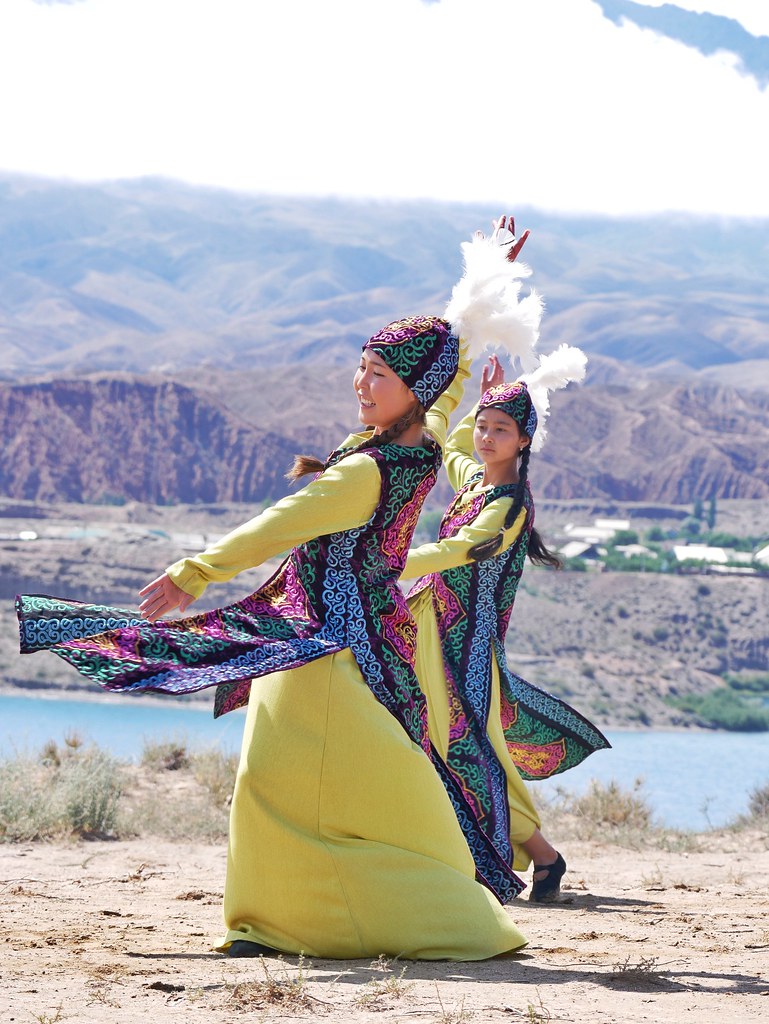 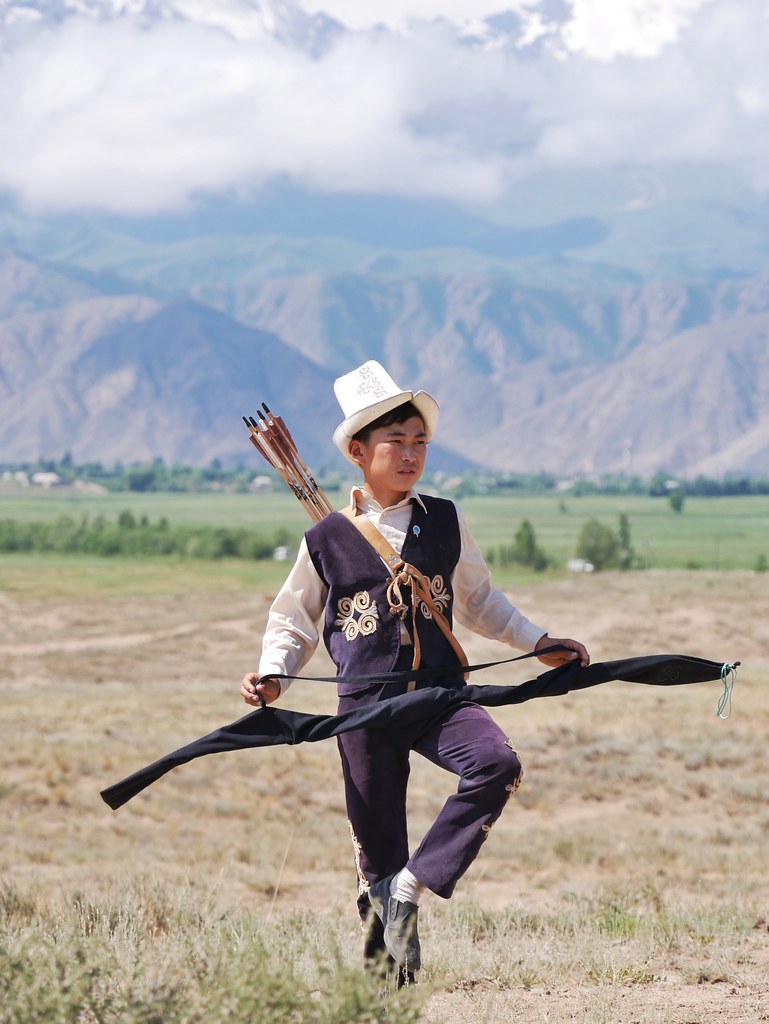 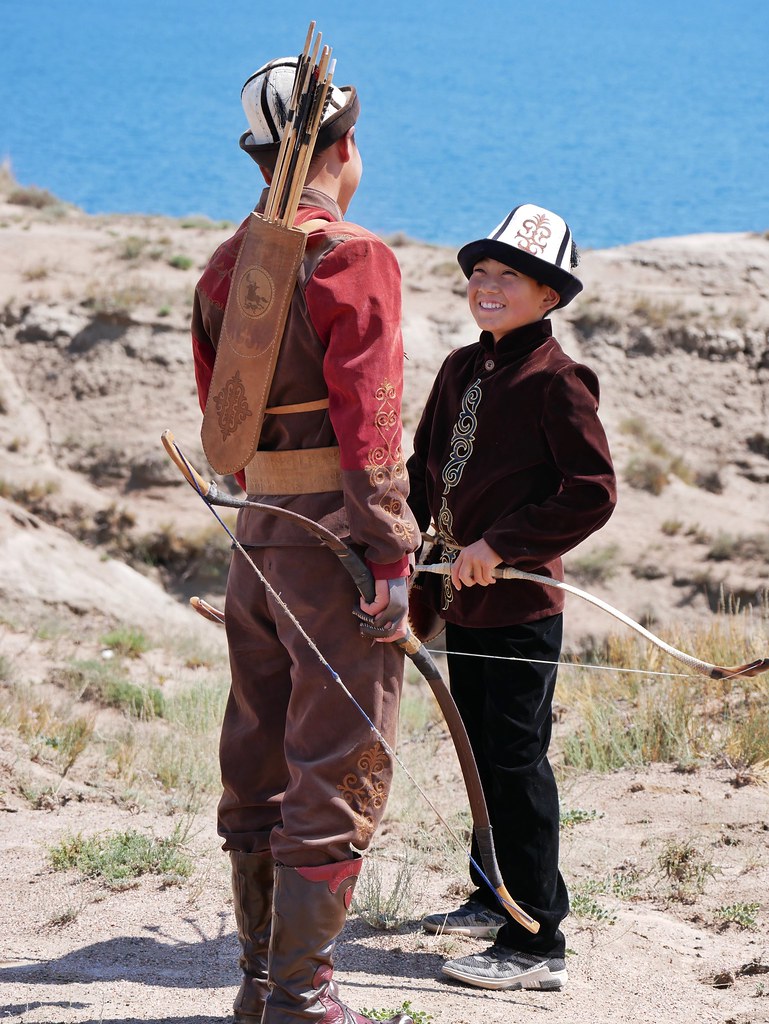 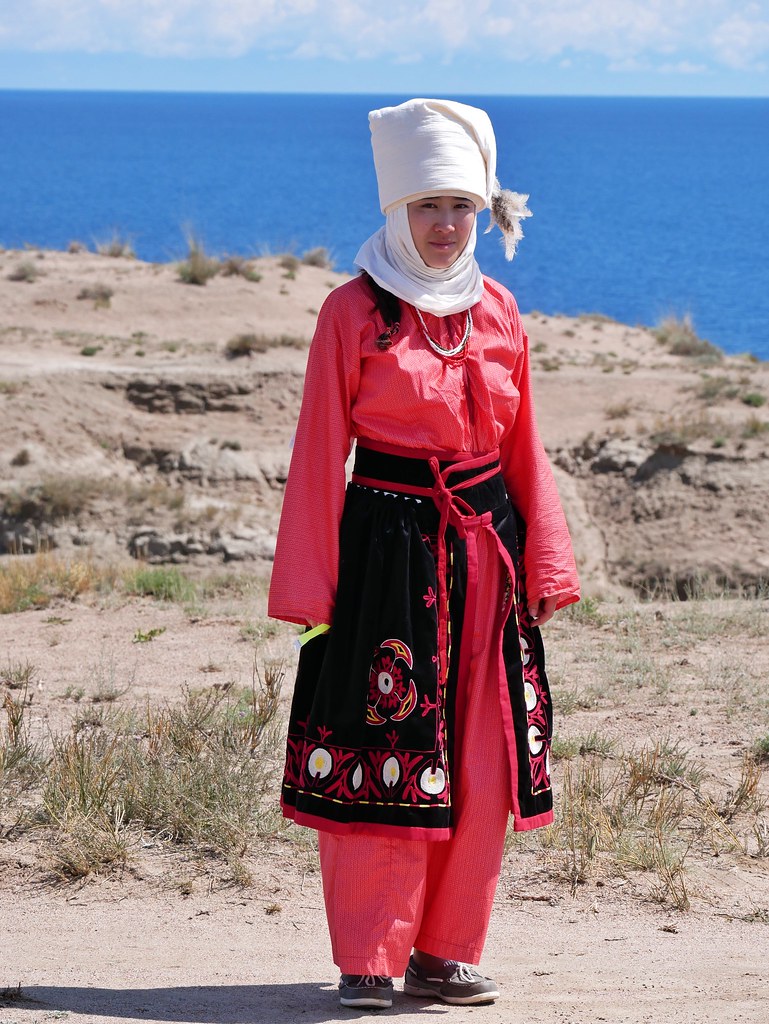 We were soon instructed to head away from the stage and watch the eagle hunting demonstration. This was going to be a highlight so we rushed ahead to get a good position. Two young men had humongous eagles on their thick leather gloves, while other men blew conches and beat drums in a sort of opening ceremony. The festival was being commentated in English so we were told that the chap standing before us was the world champion eagle hunter and that he would show us his skills. He left his eagle with another guy and ran across the field until he was a good distance away. Then he put a piece of meat on his glove and called the eagle to him. The eagles 2 meter wingspan graciously glided just a couple of meters above the ground and towards the hunter. I was filming it on my camera so only watching through a small screen but even I could see an 8 year old girl was walking without a care in the world through the field and towards the eagle demonstration. I then looked up with my eyes and that’s when the shit hit the fan. Suddenly the eagle spotted the child and diverted for her. We couldn’t believe what we were witnessing as the eagle swooped over her and went in for an attack, the crowd breathed in deeply and squealed in shock. The young girl was screaming and then she fell to the ground with the eagles talons digging sharply into her back while she wiggled about. The eagle hunter ran at lightning speed and tried to detach the eagle but it clearly wasn’t easy. Another eagle hunter on horseback galloped over and two other men ran to help. Finally the eagle was released from the child who got up and ran to her parents in the crowd. The eagle was doing exactly what it had been trained to do, ok humans aren’t the goal for hunting but it sensed the movement and fear and did what it thought it’s master wanted it to do. The parents should never have let their daughter wander off like that especially into a closed off area. 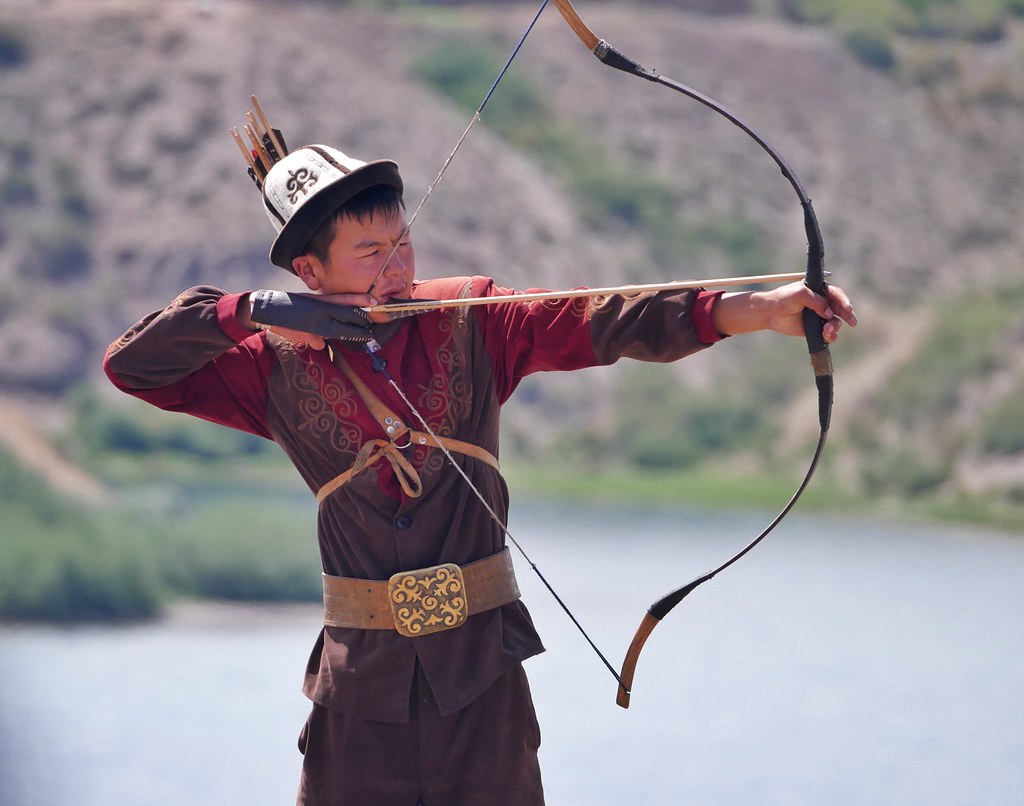 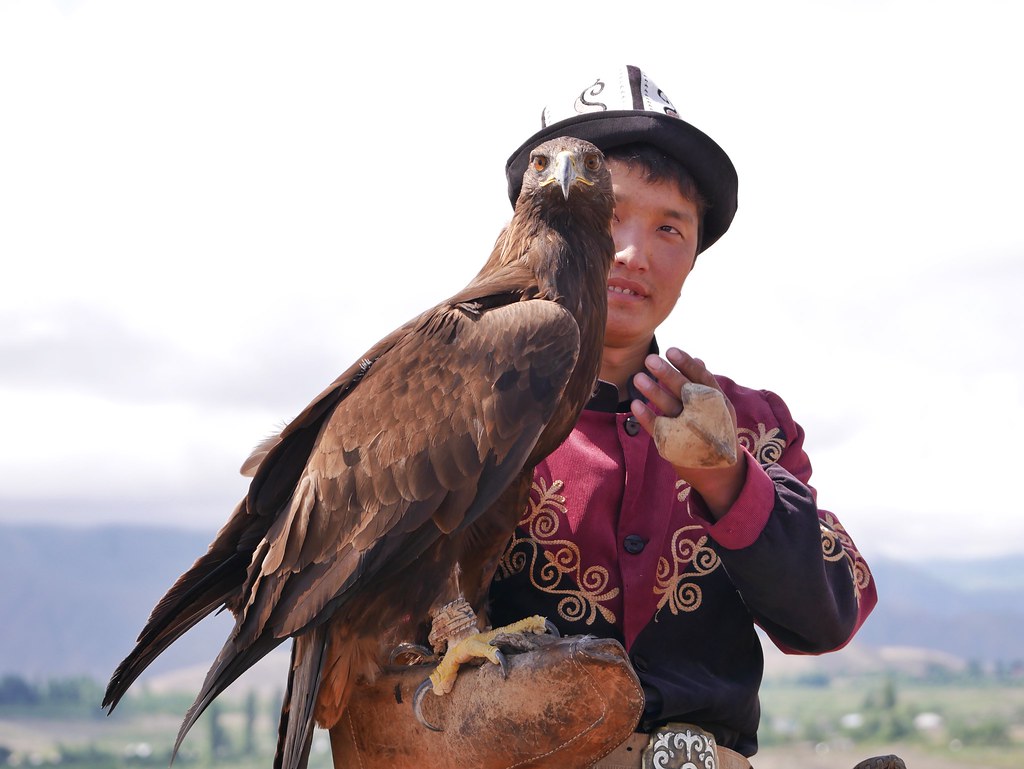 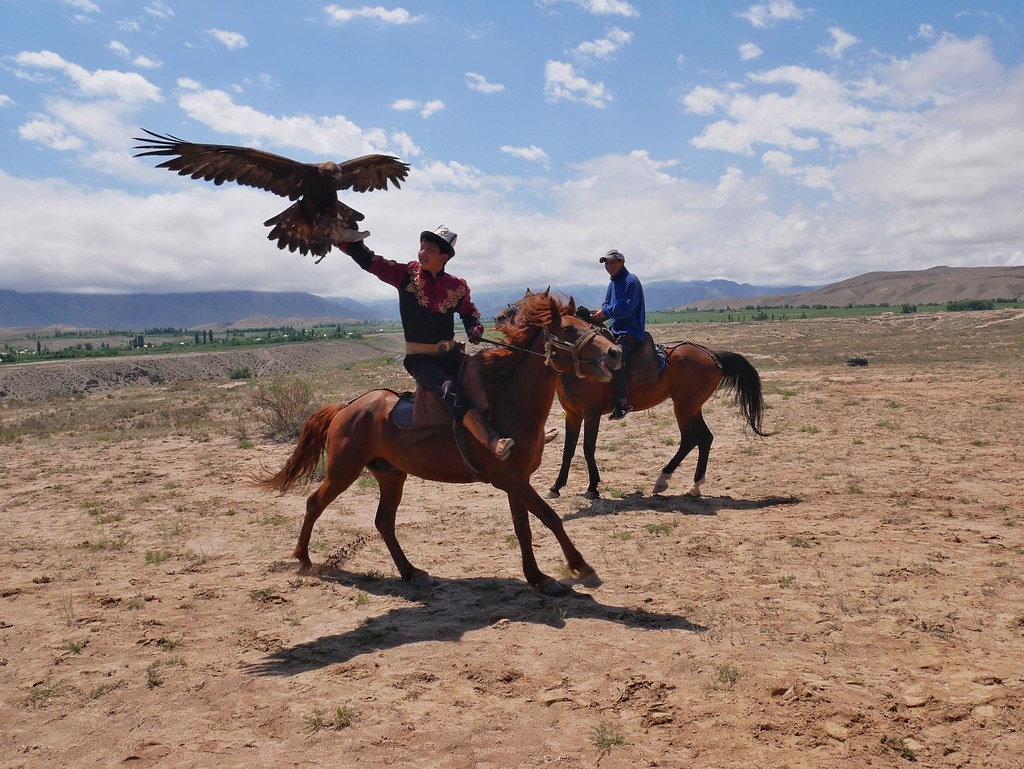 I guess the commentator was as shocked as us and spoke up saying “we are deeply sorry about that…it was an accident…the girl is fine, just very afraid”. And so the show went on, the demonstration was performed as it was supposed to be and then they showed us another example. A fox hide was attached to a long rope and the hunter galloped away on his horse while dragging the hide to act like a running animal. The eagle was released and immediately took aim on the fox getting low and eventually wrapping its claws around the animal until its owner came over to reward the bird with meat and take his ‘freshly hunted’ animal. I later saw that the eagle attacking the girl had made it into a lot of newspapers, the articles all varied slightly, some said she had minor injuries while others suggested she was severely injured. The eagle hunter was interviewed and basically said the eagle could have easily killed the girl, or a grown adult, but he didn’t “he just wanted to seating on her”. We were reassured that the girl was ok on numerous occasions throughout the festival so hopefully she doesn’t have any long term damage. 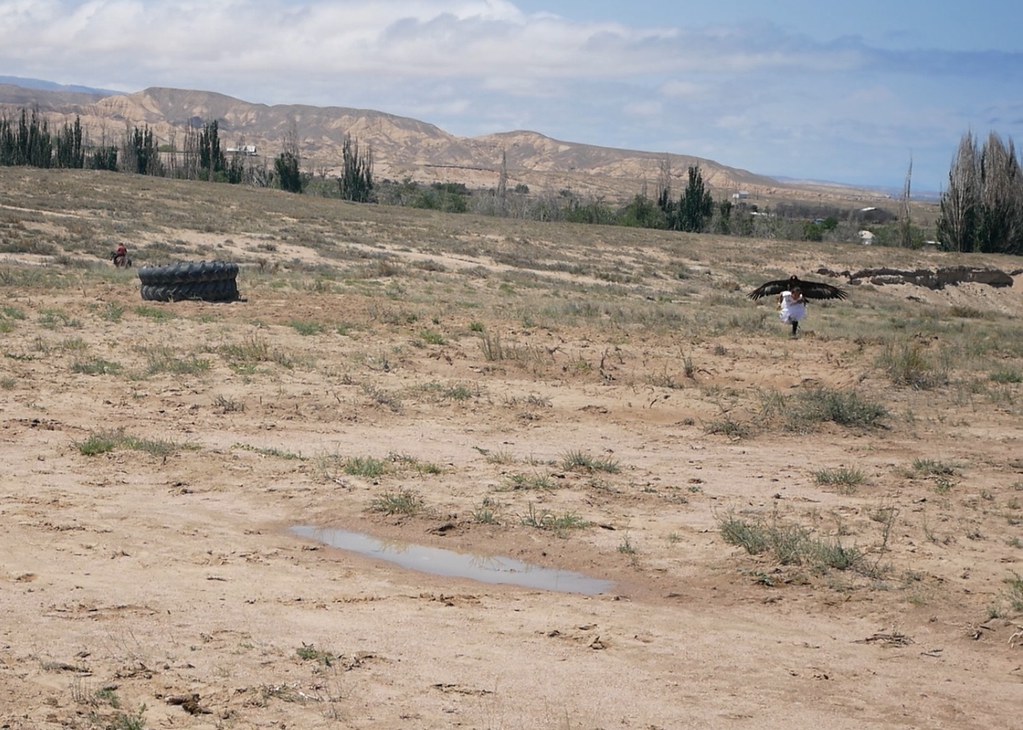 All the locals seemed to be a world champion in some nomadic sport and one of them was a highly skilled gymnast. Her final trick was crazy as she did a handstand while using her leg and foot to shoot the bow and arrow. Just as she was lining up the shot a lady walked right in between her and the target. She was absolutely oblivious and filming the crowd on her iPhone while the acrobat carefully balanced herself and waited to take the shot – which of course she got on target. A very quick yurt making competition took place too with five men moving like maniacs to erect and decorate a yurt in record breaking time. It was taken very seriously but they were clearly having fun too. One mans sandal snapped and all of the men were dripping with sweat. They managed to put the whole thing up including the decorative trim in 10 minutes and 14 seconds. Just to think at our first yurt stay in Kyrgyzstan they made such a big deal about how long the yurts took to erect when we asked for a cheaper price. 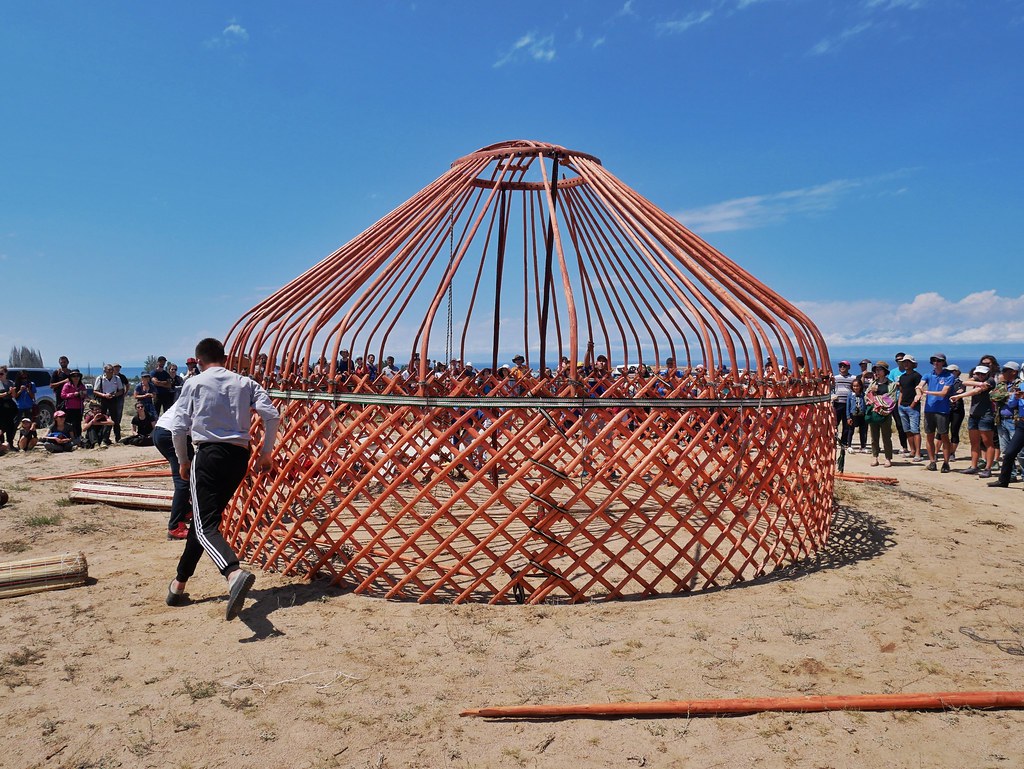 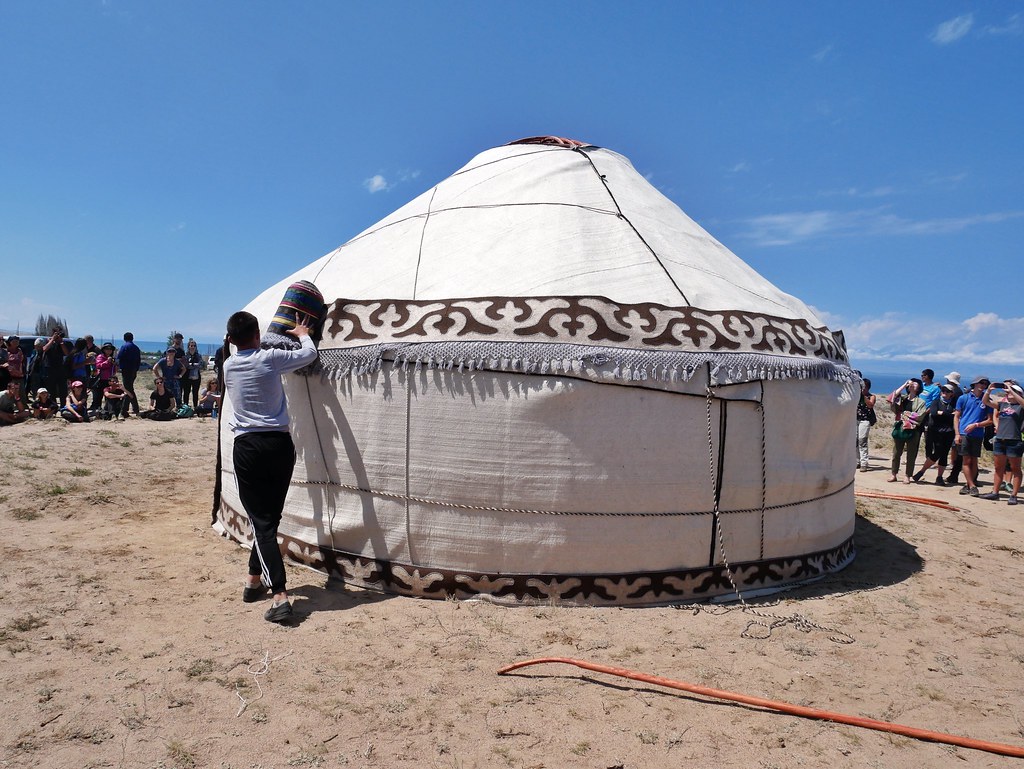 The heat became intense in the afternoon so we stopped for some plov which is a local pilaf rice dish with some rank fatty slabs of meat which I picked out and gave to Craig. We strolled around after lunch and found that everyone was very happy to have their photo taken so we took advantage of the occasion with the blue lake and mountain backdrop. We spotted a girl riding a horse in a pretty dress and I thought it would make a great photo but then the horse began bucking and she fell sideways off it and got stepped on by the horse! Jesus, could today be anymore of a disaster for the local committee that organised this festival?! 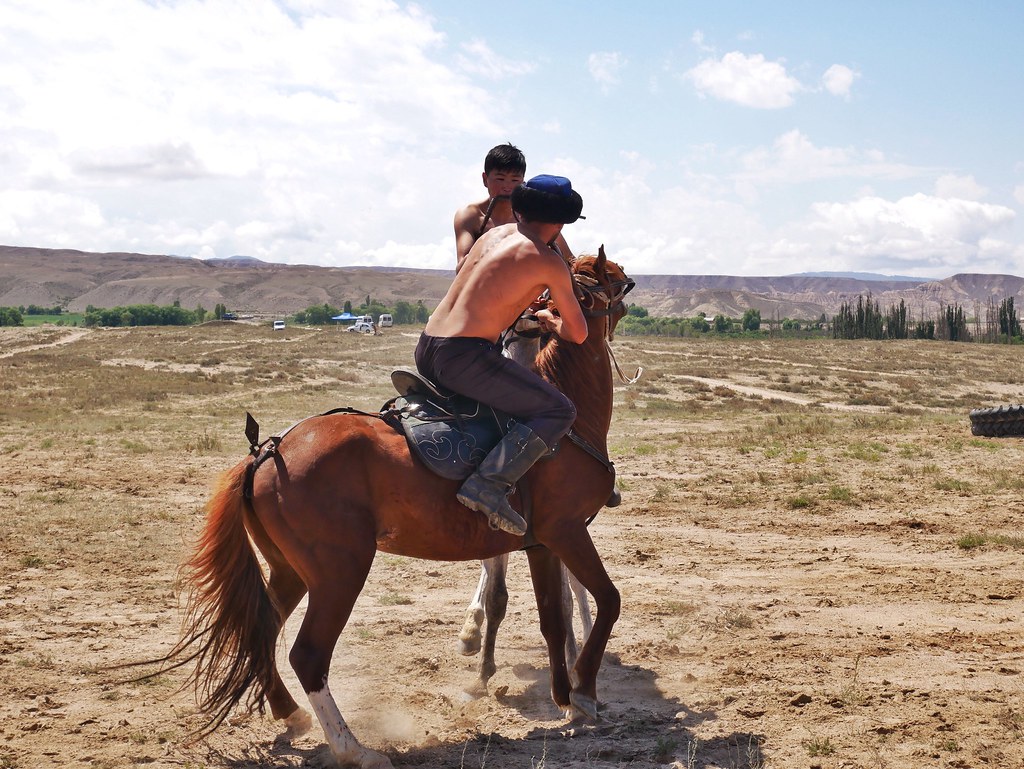 The day ended with more horse games like wrestling while on horseback which just seemed like a pretty confusing situation for the horses. Then they played chase the bride where a lady galloped away and was chased by a man on horseback. The winner was the man that managed to kiss her while riding. But the main event of the day was Kok Boru, otherwise known as dead goat polo. It’s Kyrgyzstan’s national sport and one they take very seriously. But, as the game suggests, it involves a goat which is sacrificed before the match and its head and legs are cut off. Two teams have to battle it out to pick the goat up from the ground (while on horseback) and then gallop to their teams goal which was a giant tire. The goat needs to be thrown into the tire to gain a point. As the horses charged the dusty ground erupted around them and it was hard to keep an eye on where the goat was. It was passed between team members and yanked away by the opponents. Some men tucked the bloody carcass under their leg so they could hold onto their reins and whip the horse at the same time. There’s no denying that it was a brutal sport but it’s a huge part of their culture and culture is a big part of travelling. The winning team get to dine on the goat and if your invited to join them for the feast it’s considered a huge privilege to eat a Kok Boro goat. I read that this tradition came about in the olden days when men on horseback would hunt down wolves that attacked their livestock. The dead wolf would be slung onto their horse and ridden back to the village but along the way the men would fight over the wolf. When they arrived at the village they would throw the wolf at the elders house as if to say “our livestock is safe tonight!”. It was fascinating to watch the game, the men were having so much fun and even after the festival game they continued playing for over an hour. The game is clearly frowned upon by a lot of people due to animal rights, so I think it’s important to say that Kyrgyzstan has a lot of respect for animals and let’s their livestock roam wild and free in the mountains, not locked up in horrible cages. The game is tradition and to be honest the world is modernising so quickly that it’s bloomin’ good to still see it. 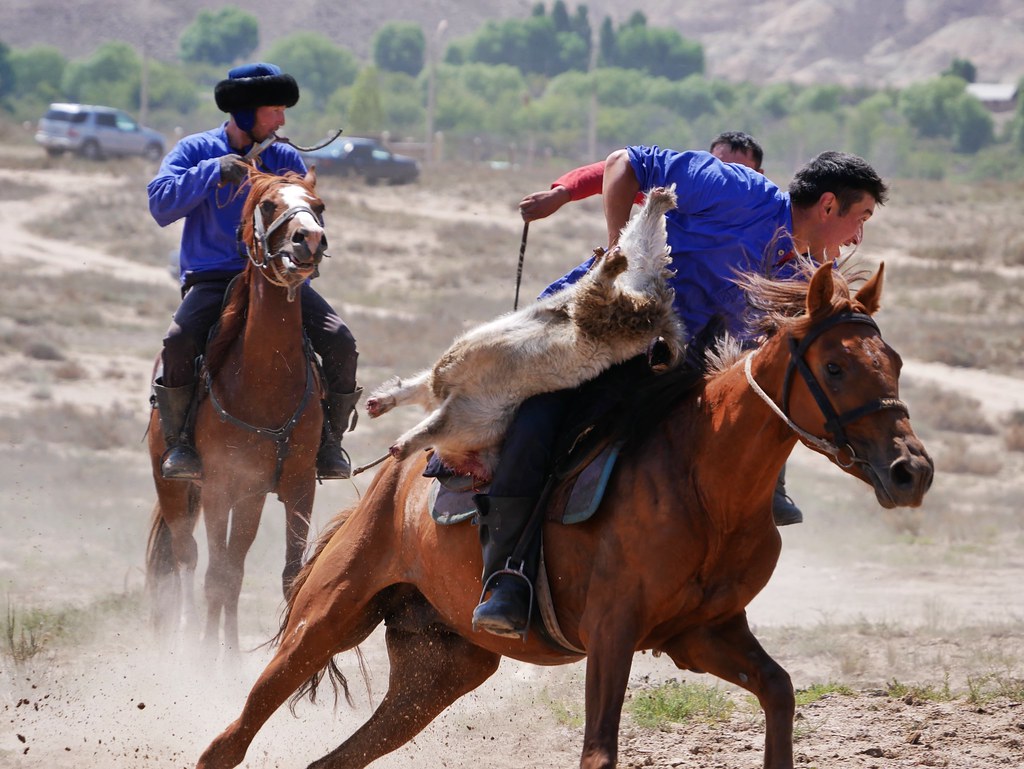 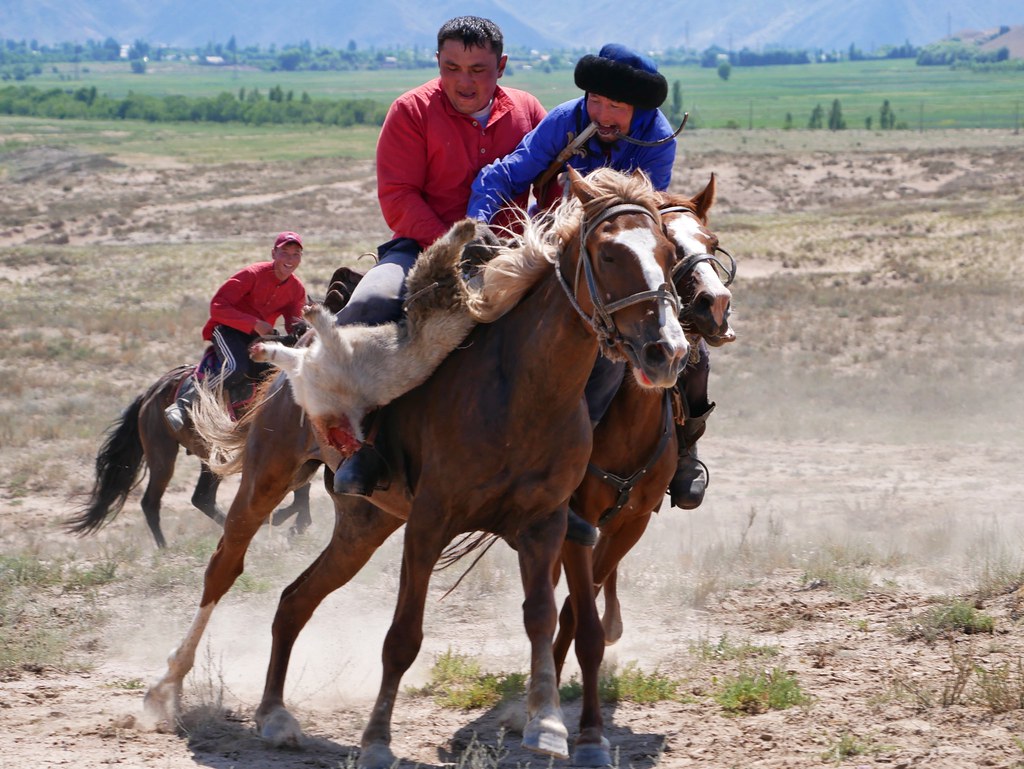 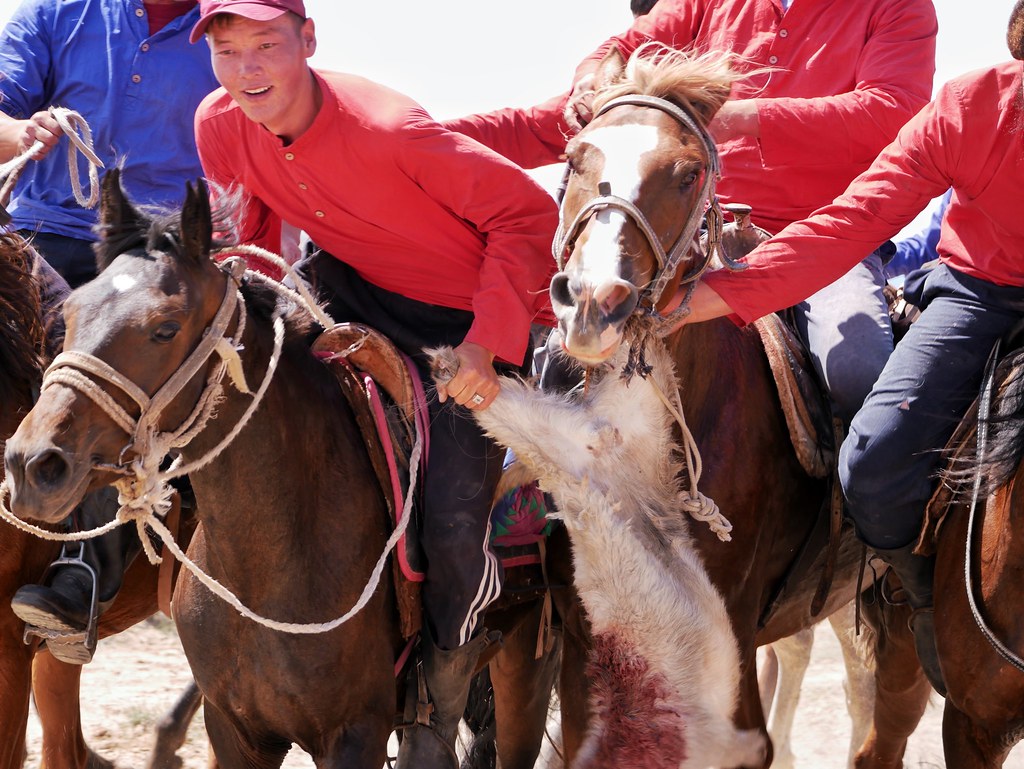 The day ended with music and dancing and we really didn’t want to get involved in that malarkey so we escaped down a dusty slope to the crystal clear lake which we’d been eyeing up all day. My feet and shoulders were totally burnt from the intense sun so swimming in the lake was a wonderful relief. 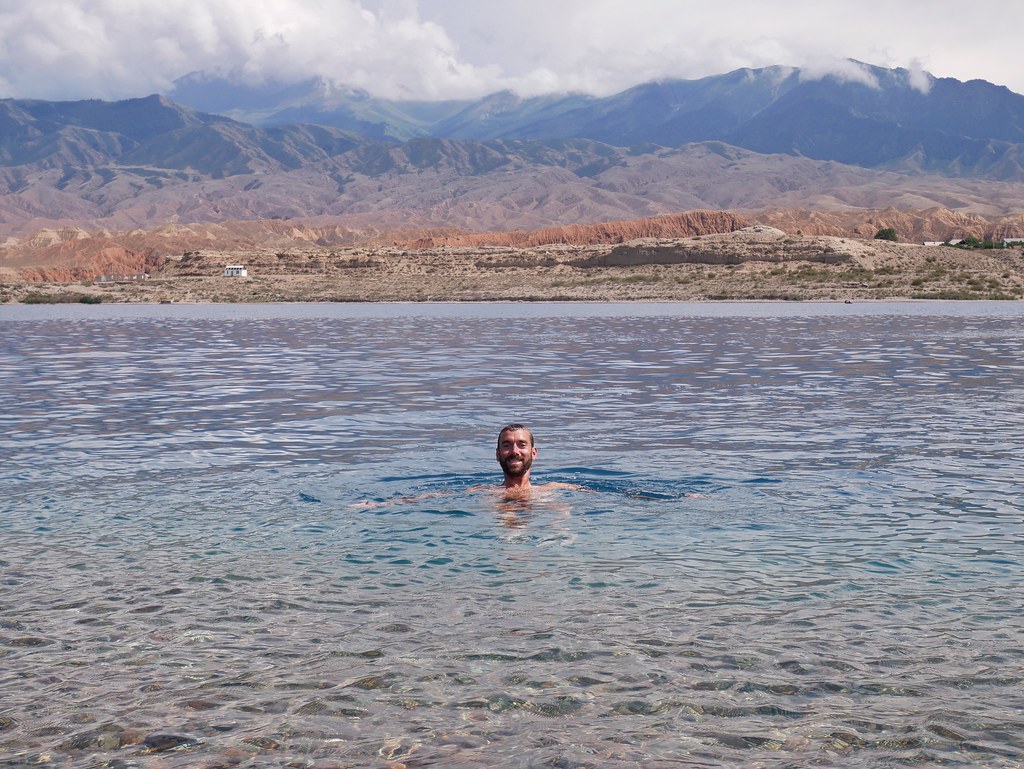 Our minibus wasn’t leaving until 5pm so we had an hour and a half of beach side lounging but I soon realised that the music had stopped at the festival. I was worried it had finished early and the minibus would leave earlier than scheduled so after me moaning for a while Craig couldn’t relax and succumbed to my demands to check our bus was still there. When we got back up the hill the festival was all being closed down, the Kok Boru game had finished and one of the two minibuses had already gone. We figured the last one had to abide by the 5pm arranged time so we slowly made our way towards it but when we were 400m away the van drove off. For fuck sake. There were a few cars left in the remote little village to try and hitch a ride with but we were pissed off that they said 5 and left an hour early. A car came by and inside was the festival organiser who asked us where we were going “well, that minibus was supposed to take us back…” she made a quick phone call and thank god the mini bus turned back for us and we sat amongst lots of grumpy looking tourists because they had to wait for us. 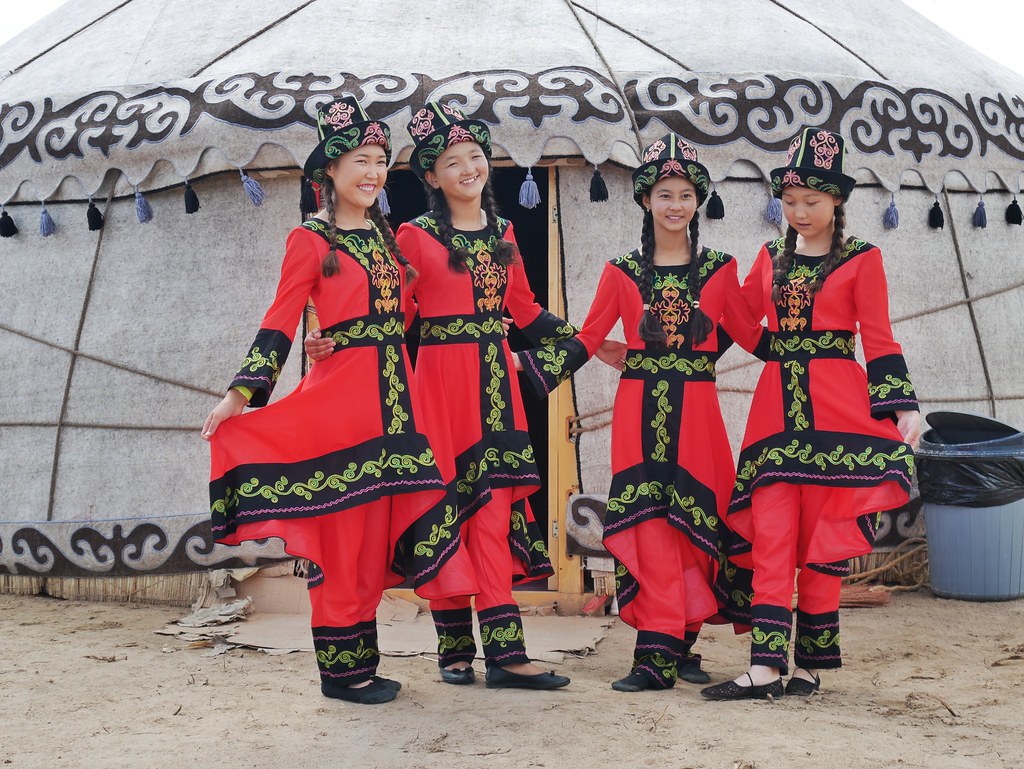