We never thought about scuba diving in the arctic sea, but an opportunity came up in our final week which we couldn’t turn down. We were heading out with the lovely team from Lofoten Diving who are based in the fishing village of Ballstad, not far from Leknes. We managed to get a ride with our hosts and were then briefed on the dive. 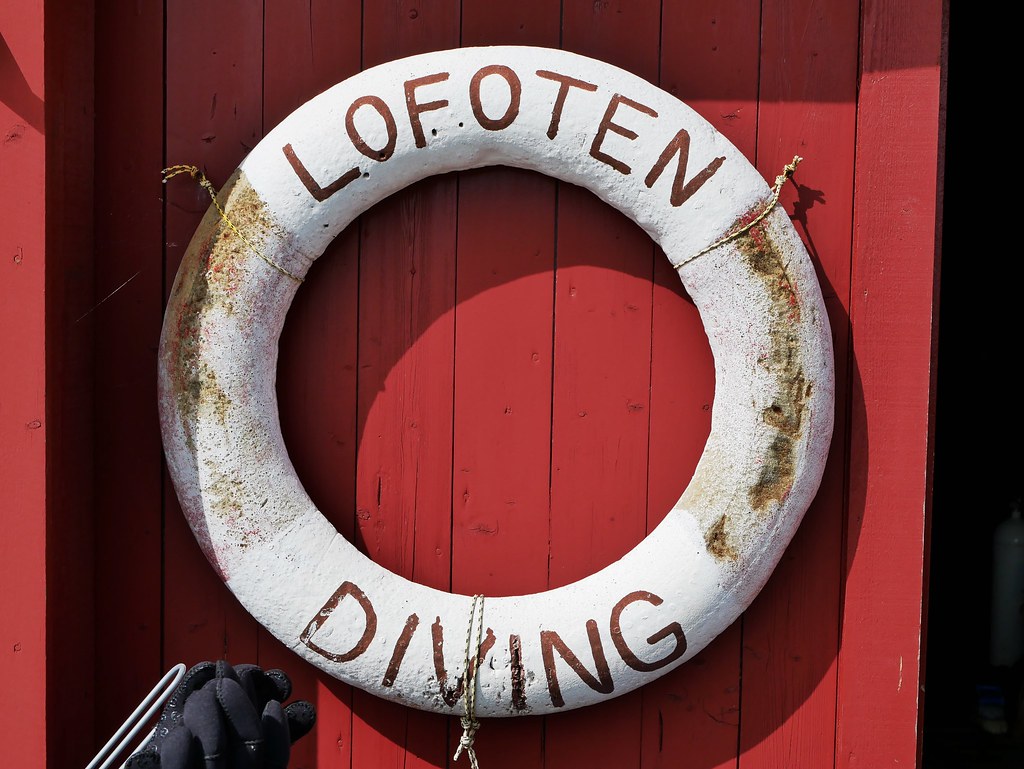 The coldest temperature we’ve been diving in is 26 degrees in Honduras. In fact we’ve only been diving in tropical climates, so it was going to be quite different in the 8 degree artic waters. To cope with the cold conditions we were kitted out with top quality gear; first a thermal sort of jumpsuit, and then a dry suit. The dry suits were hilarious to get into and involved a bit of body-contorting. Rubber seals around the neck and wrists prevented any water entering and we had thick wetsuit gloves and a matching head-piece for our extremities. 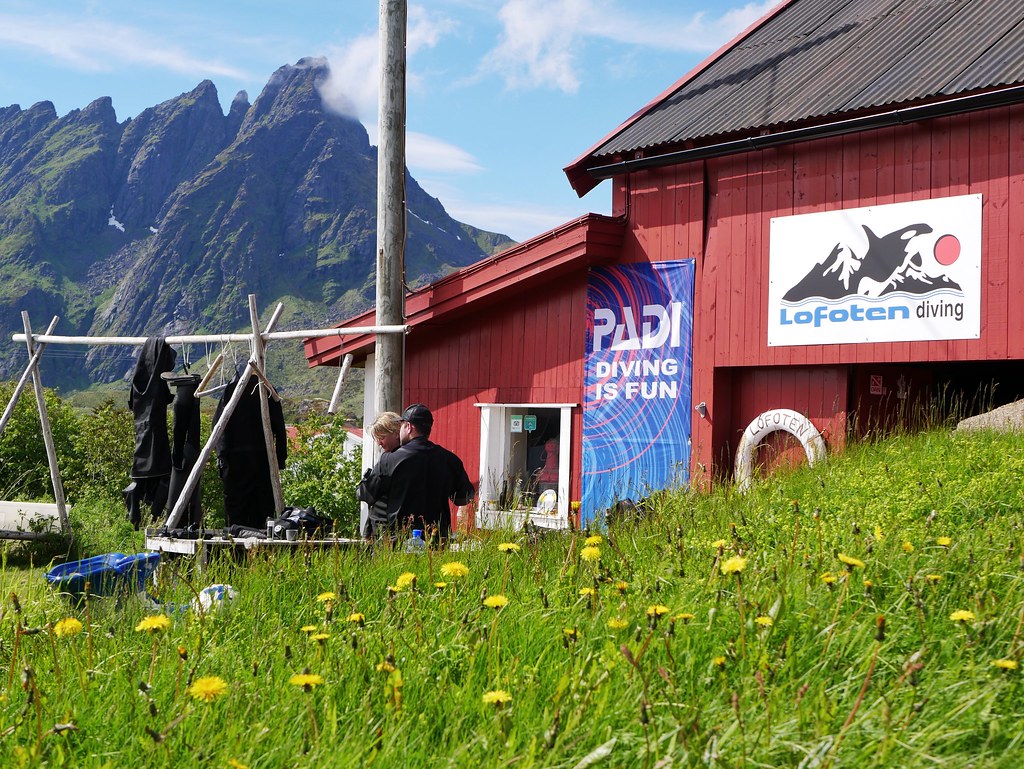 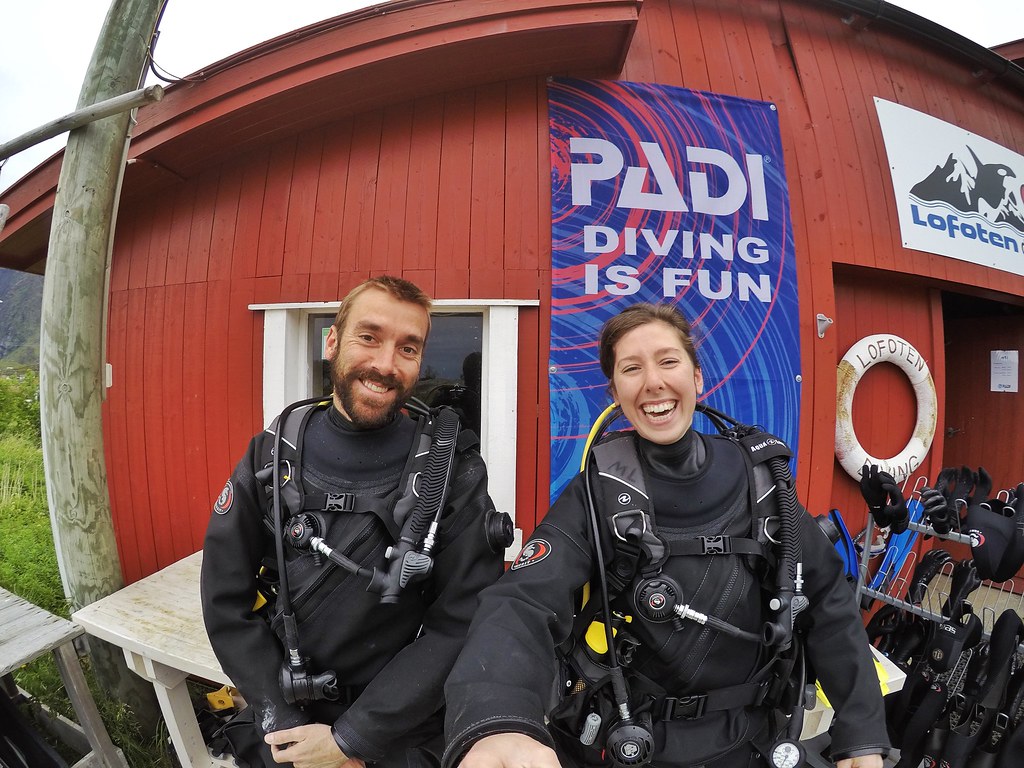 With our tanks on our backs we walked down to the coast and I felt like an old lady trying to swing my legs over the rib boat with all the heavy gear on. We headed out between some islands and after about 10 minutes we reached the dive site. We took it in turns to lean off the back of the boat and into the sea. When my head came out the water my legs were awkwardly floating up too, there must’ve been some air down by my feet in my dry suit and I just couldn’t get them down which was a bizarre feeling. I managed to shove them down and then they sunk down like they were supposed to. Then we headed to a shallow area to try some skills and first impressions were ‘It’s fucking cold’. My face was hit with the chilly water but after 5 minutes under I just warmed up and it was strangely comfortable. I felt completely out of my comfort zone though, we haven’t been diving in a couple of years and breathing felt really foreign. I thought I was going to have to give up, maybe we would just snorkel instead. But after we did the skills it all felt normal again and I was filled with confidence by our instructor, in fact we had two instructors with us so we felt like VIPS! 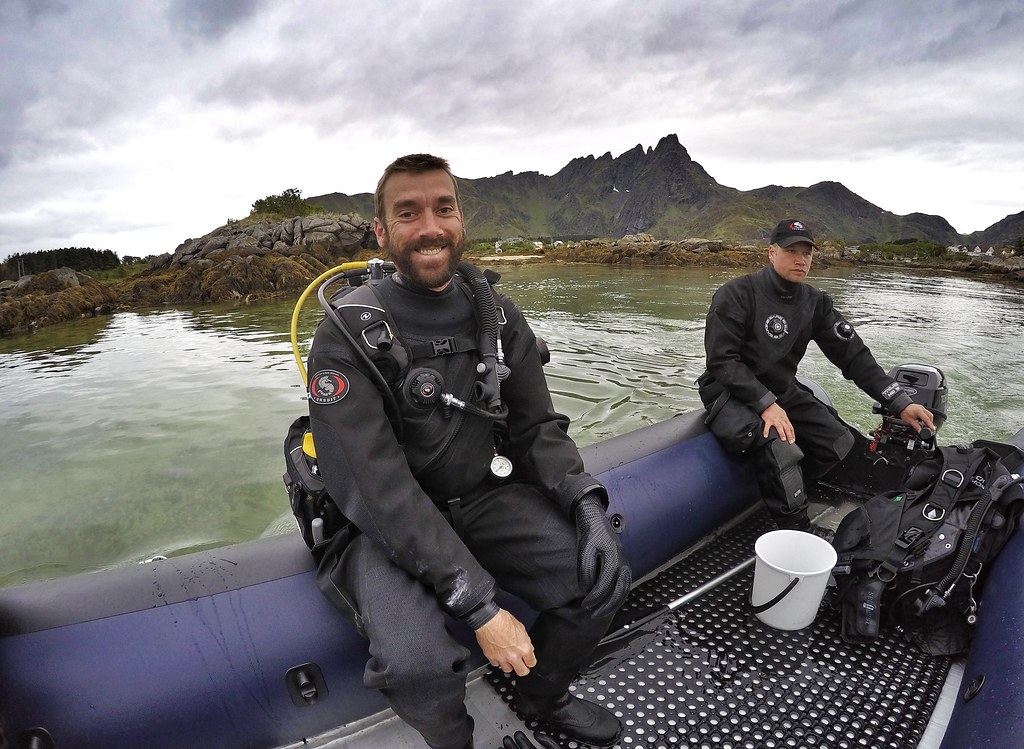 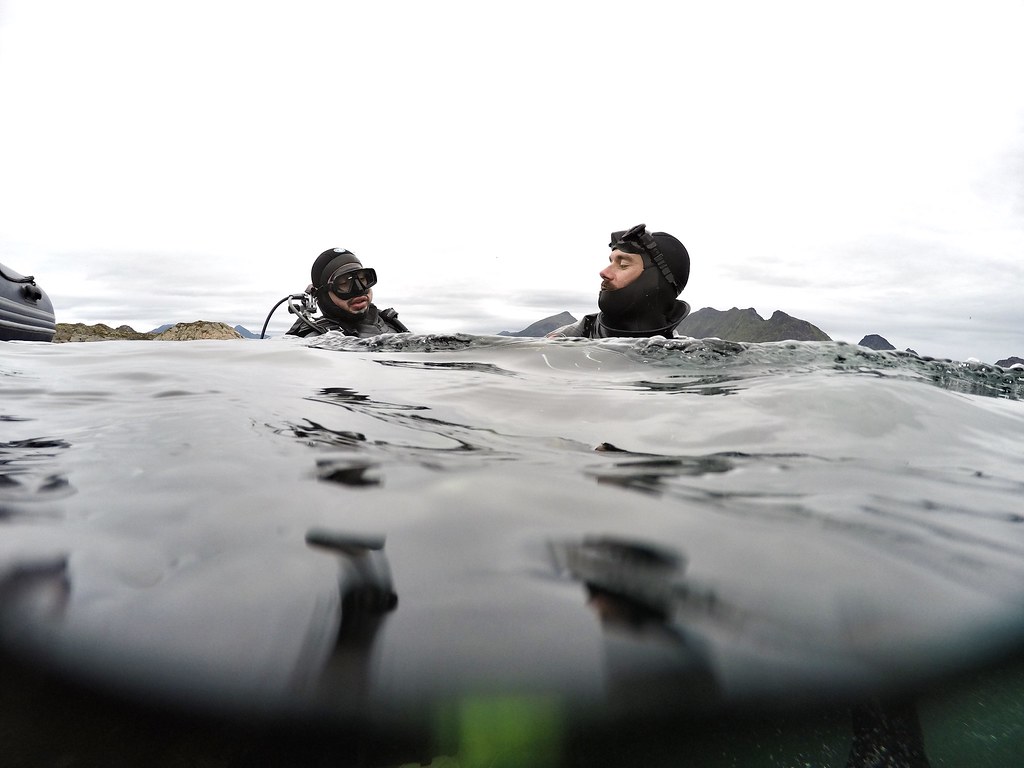 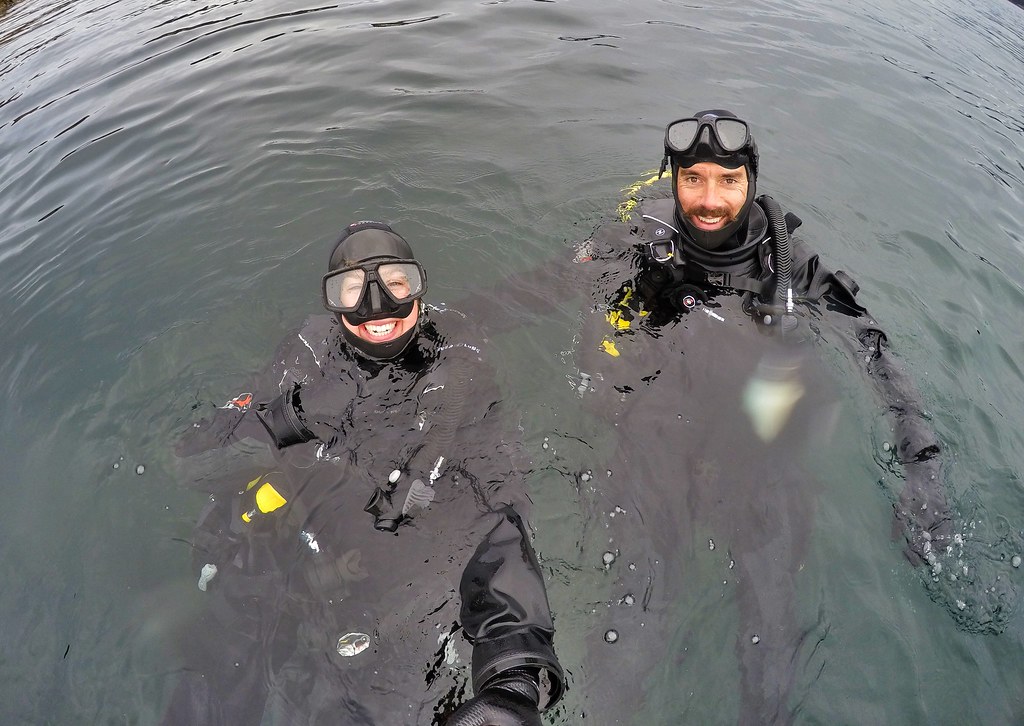 We submerged down and had to work out how to use our drysuits. As we descended they began to tighten around our bodies and it made us sink quicker. The instructor pressed my dry suit button which was connected to my tank so air rapidly filled around my body. This air helped us stay warm and neutrally buoyant and then we could enjoy the dive which involved swimming over a huge kelp forest. The colourful kelp swayed with the swell of the water, it’s something I find really creepy, I would never jump into the sea for a swim if there was a chance that my leg might touch some seaweed, but when I was diving above it in a thick suit I felt very safe and quite mesmerised. 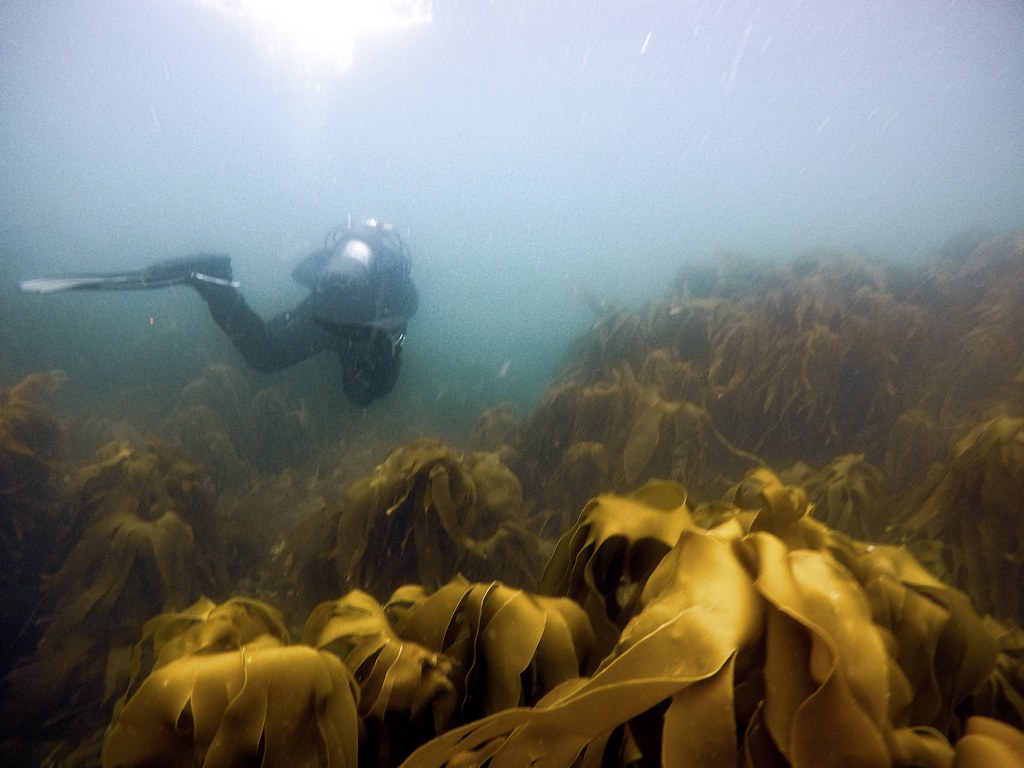 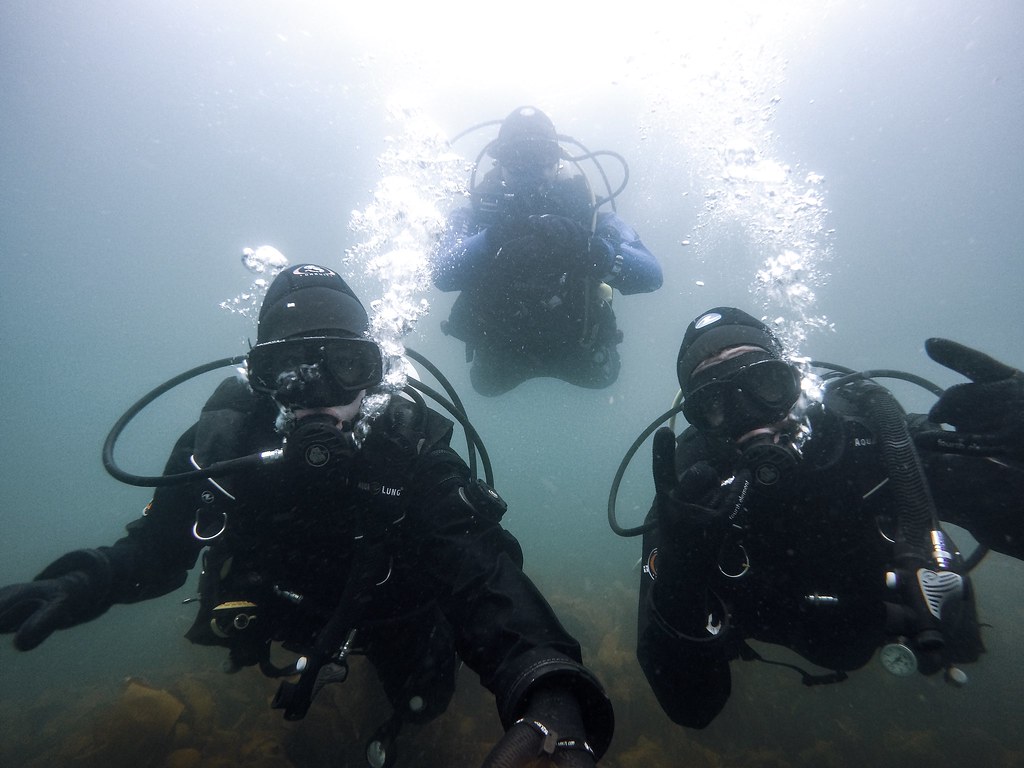 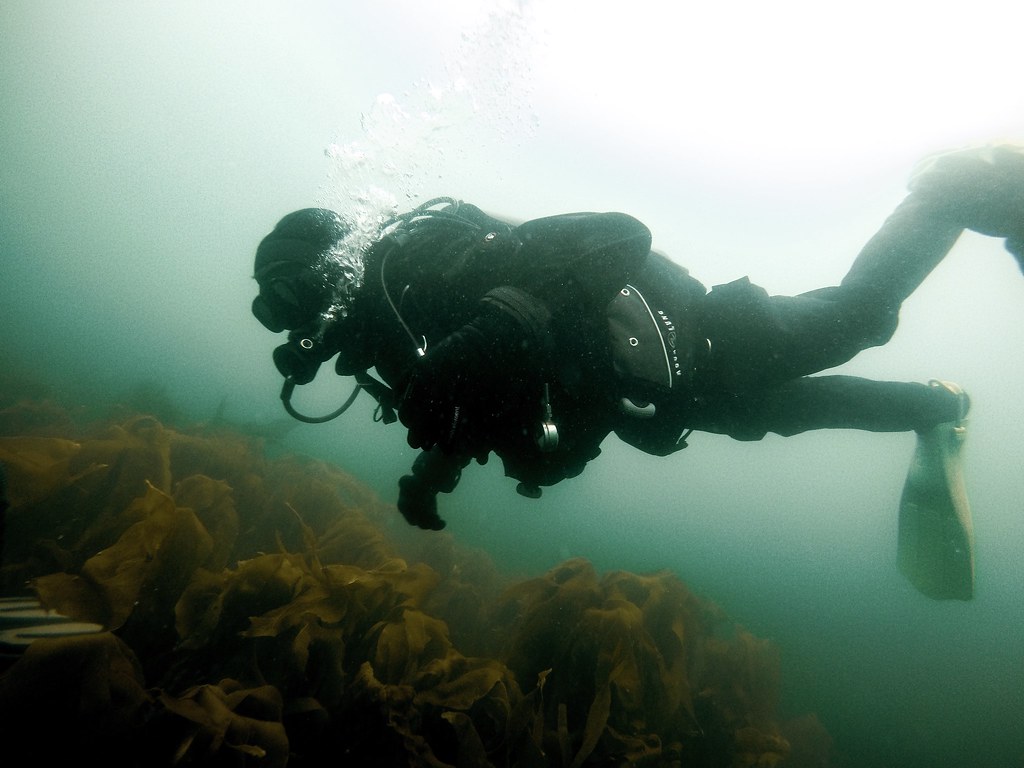 A storm hit this area a couple of days before our dive so sadly the visibility wasn’t at its best but it was still very enjoyable and we were surrounded by jellyfish. They were all a similar style; clear with white lines darting up and down their bodies. When our instructor shone his torch on the jellyfish, the lines all turned into psychedelic colours, buzzing through their clear bodies like strobe lights. We went to a boat wreck covered in urchins and anemones down at about 18m. Except for a steering wheel the rest was quite unrecognisable but it has given life to the sea since it sunk in 1935. 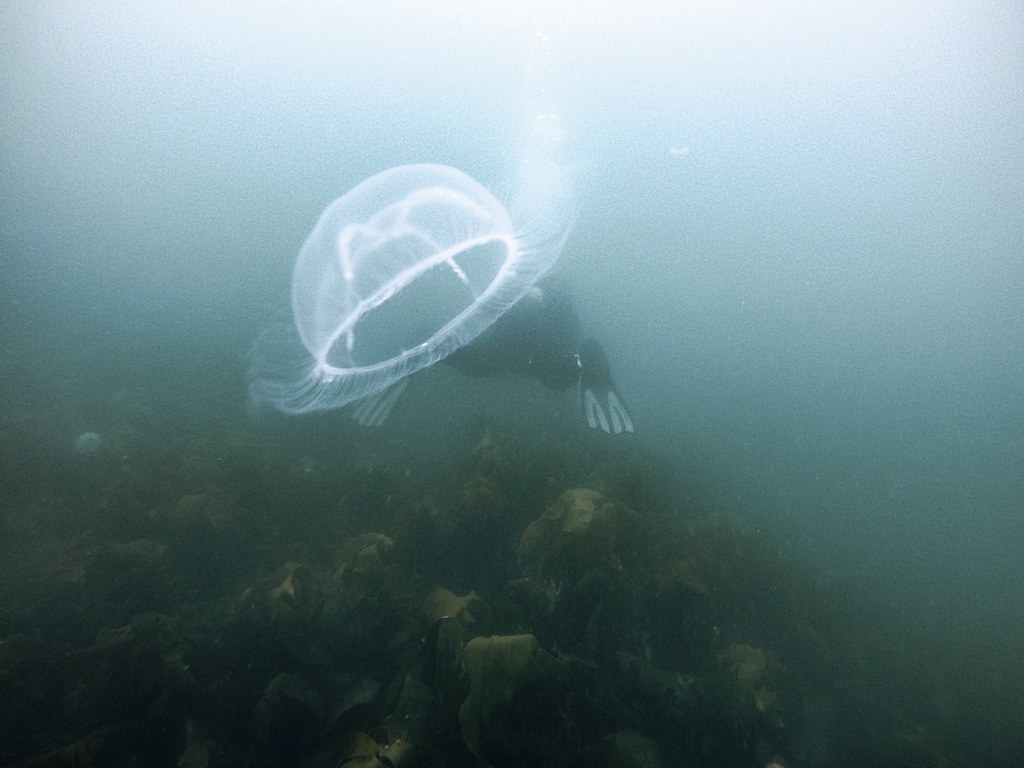 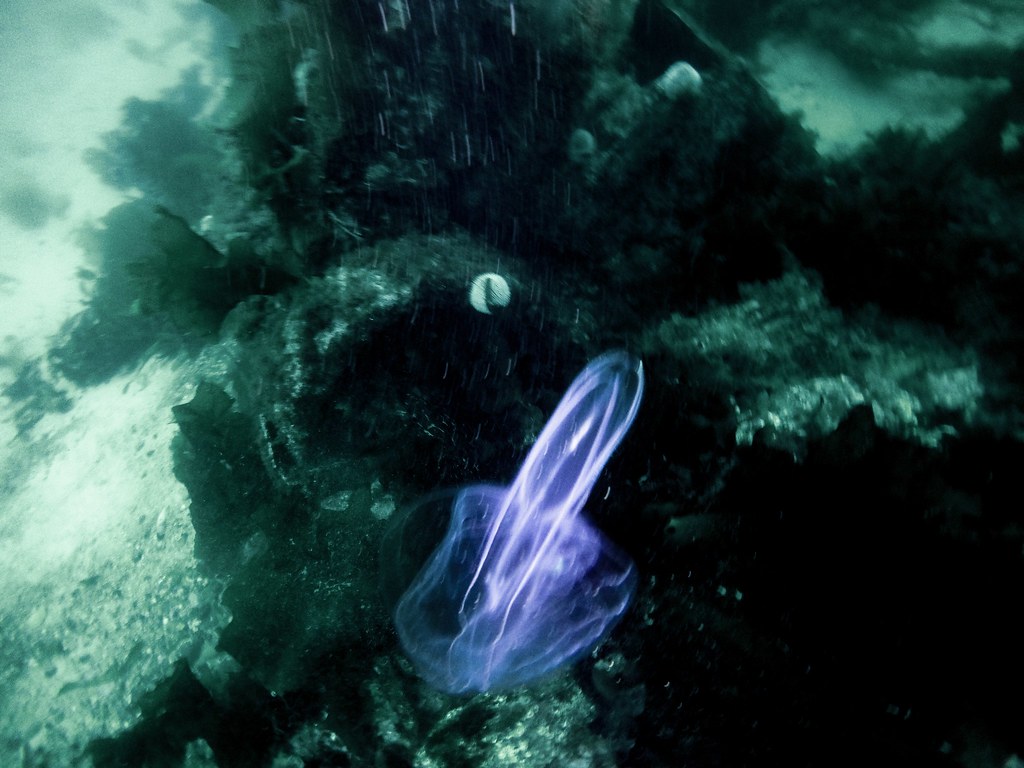 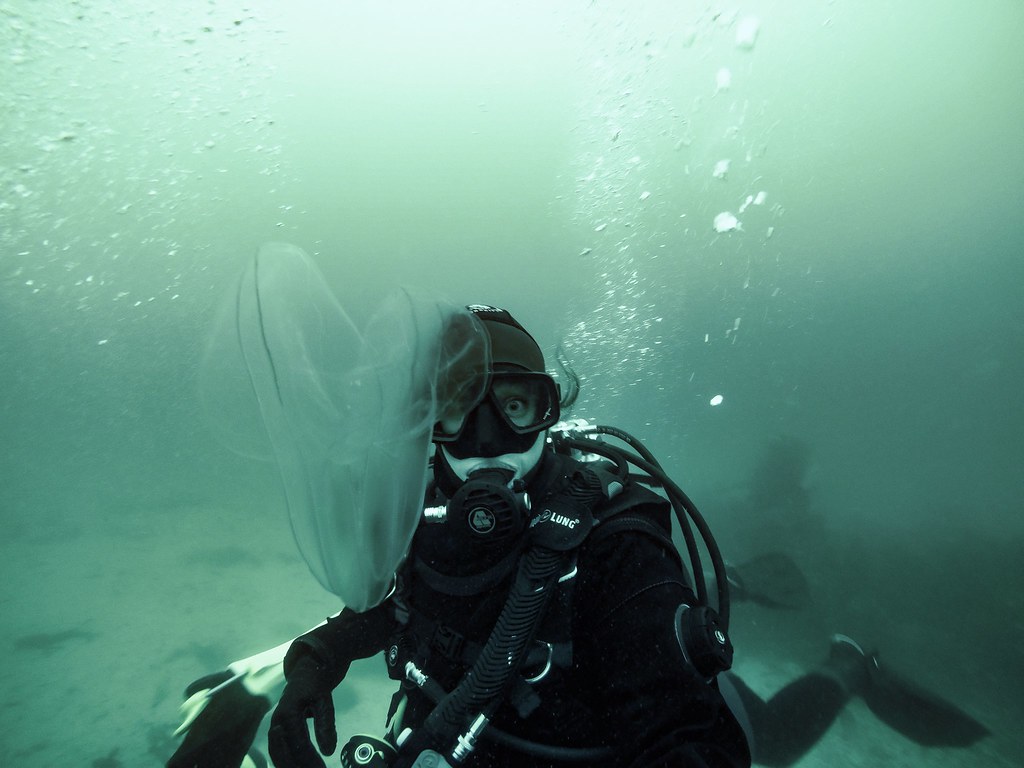 It was a really fun experience and great learning to dive in a drysuit. We’d love to try again in winter when the visibility is between 30 and 50m which just sounds mind-boggling! 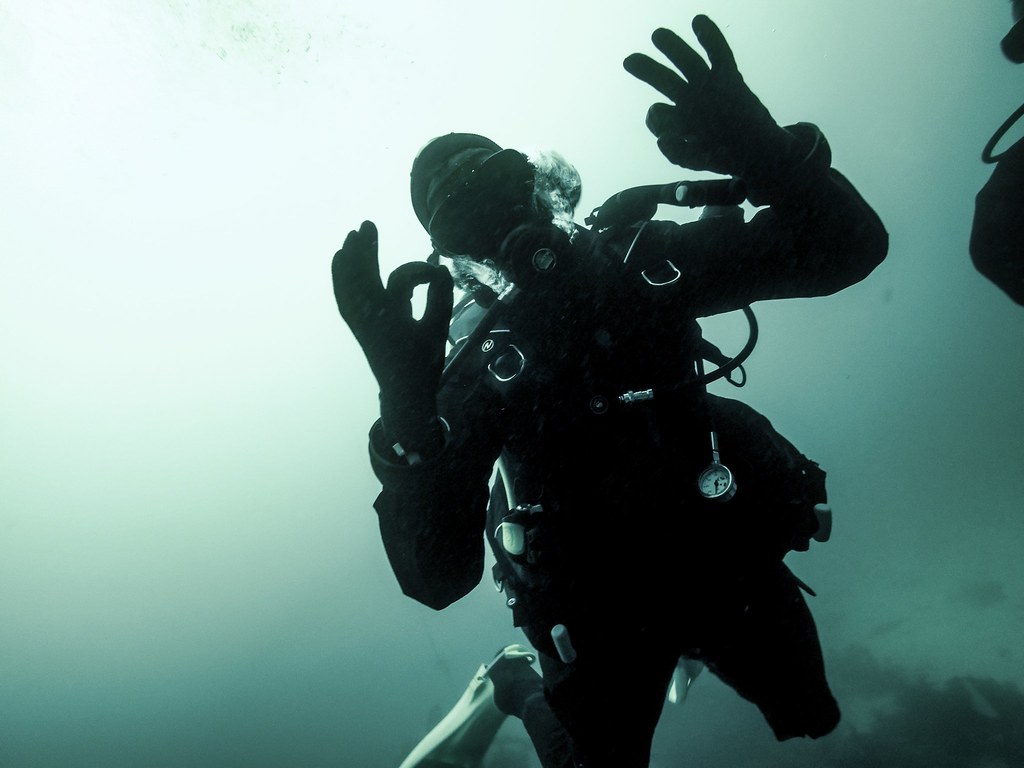 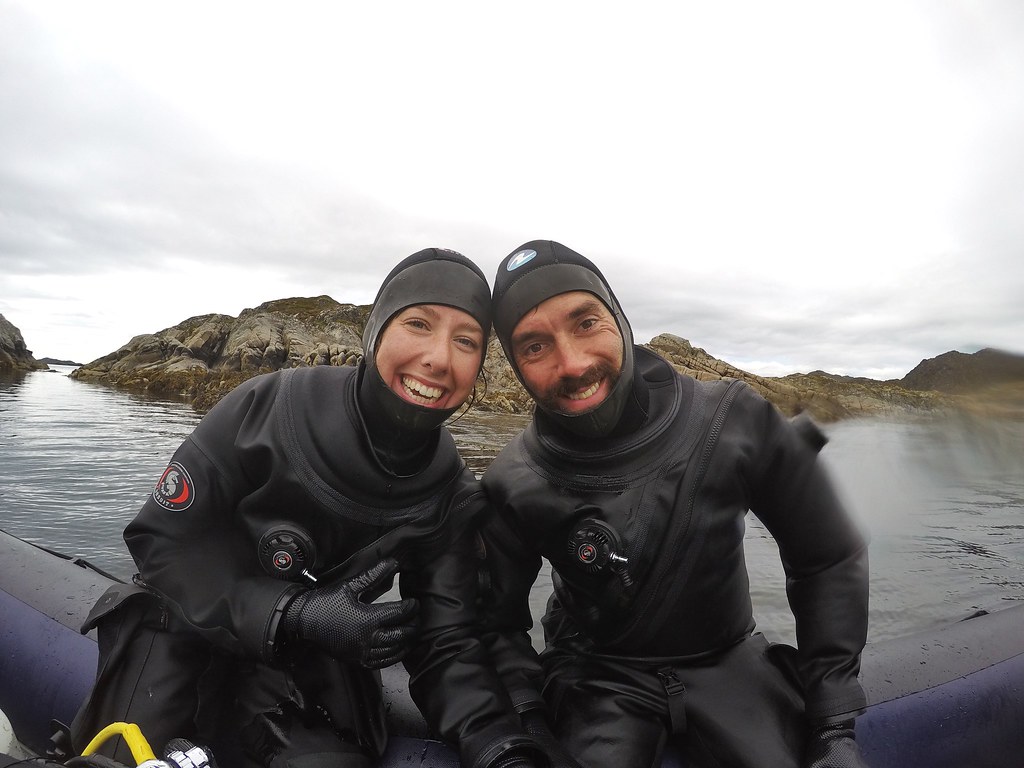 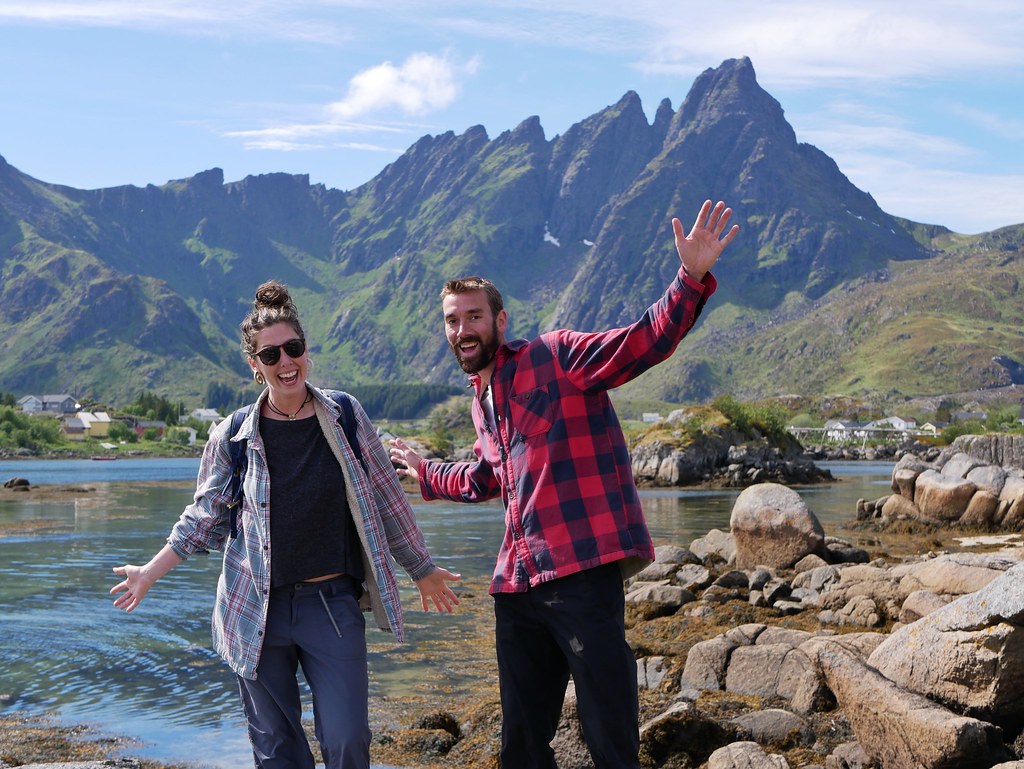 We didn’t have a ride organised for our trip home, so after a picnic by the sea we left the village and headed to the road to begin hitchhiking. Our instructor actually drove past us and was heading to Leknes so he took us up to the main road. From there we stuck our thumbs out and car after car continued to drive past us. Some people just stared straight ahead, trying to avoid the awkwardness of acknowledging us with a car full of empty seats. Other people would wave their hands about showing us they didn’t have any space and cyclists jokingly pointed to their backs. After 30 minutes I was wondering why no one had stopped, we tried different tactics, we smiled, we looked sad, but still no one stopped. A bus went by but we let it pass, we’d waited so long that we figured we were committed to hitch hiking. So Craig tried an awkward dance and amazingly a car stopped! We told the old guy in the car that we were heading south to Reine, and he said he could take us 10 minutes up the road so we said any little helps and hopped in. He was a Norwegian bloke visiting Lofoten to write a book about lambs. He spent a long time telling us about the book, explaining how Lofoten lamb is the very best and that they are the healthiest and strongest due to them living in such a harsh environment. He said he was going to collect some other writers, and then he turned right up a side road…so I said “Oh, would it be best if we got out here by the main road?” and Mr Lamb said with such confidence “No, it’s much better for you to get out further up, there’s loads of cars around, a beautiful beach and lots of hikes”. I loaded my map and saw we were heading the complete opposite direction. So I double checked “are you driving back to the main road?” “Ya, ya but it’s better for you up here” and then he continued passionately talking about lambs. I figured he liked the company and we were just joining him on this scenic detour, picking up a couple of people and heading back to the main road. After 7 long and winding kilometres I double checked…and that’s when the shit hit the fan “oh no, there won’t be space for you two when I pick up the other writers, but this is good for you no? This direction is right?” So then we had to explain again that we were going south and he’d driven us north into the fucking sticks. He became a little ‘sheepish’ (excuse the pun) and was all “oh no, oh dear, what shall we do, hmm, oh dear what have I done now….”. We couldn’t ask him to take us back and come back again so we just got out of the car in the middle of nowhere, thanked him because we’re British and say thank you when we don’t mean it, and just before we shut the door we heard his final words “plenty of cars around, you’ll be fine”. His car sped off and we looked around at the wild landscape, the only car in the area was his, driving away from us and we half expected a tumble weed to roll past. We walked 15 minutes along the road until the first car came by and thank god they stopped. It was a lovely Norwegian couple but they were actually going to Ballstad where we went diving, so they took us to the main road where we were standing 45 minutes ago. The thumbs went back out and we had dozens of cars fly past us. Eventually two Germans picked us up. They were only going 5 minutes up the road but the jolly chap hadn’t picked up a hitchhiker before so he was excited to try it out. He offered for us to join a running trip with his friends but we just wanted to get home. Then we had to veer off the road and pick up his friends. Half way down the lane I had to check “we are going back to the main road aren’t we?!”. We waited outside the friends house for 10 minutes and then Mr Jolly came giggling over to us, “Ok, so new plan guys, we need to change cars!’”. So we all got into his friends car and in the boot were two AMAZING huskies. I instantly fell in love. They leaned over and gave us lots of doggy kisses and we laughed that they were our favourite hitch hiking companions so far! 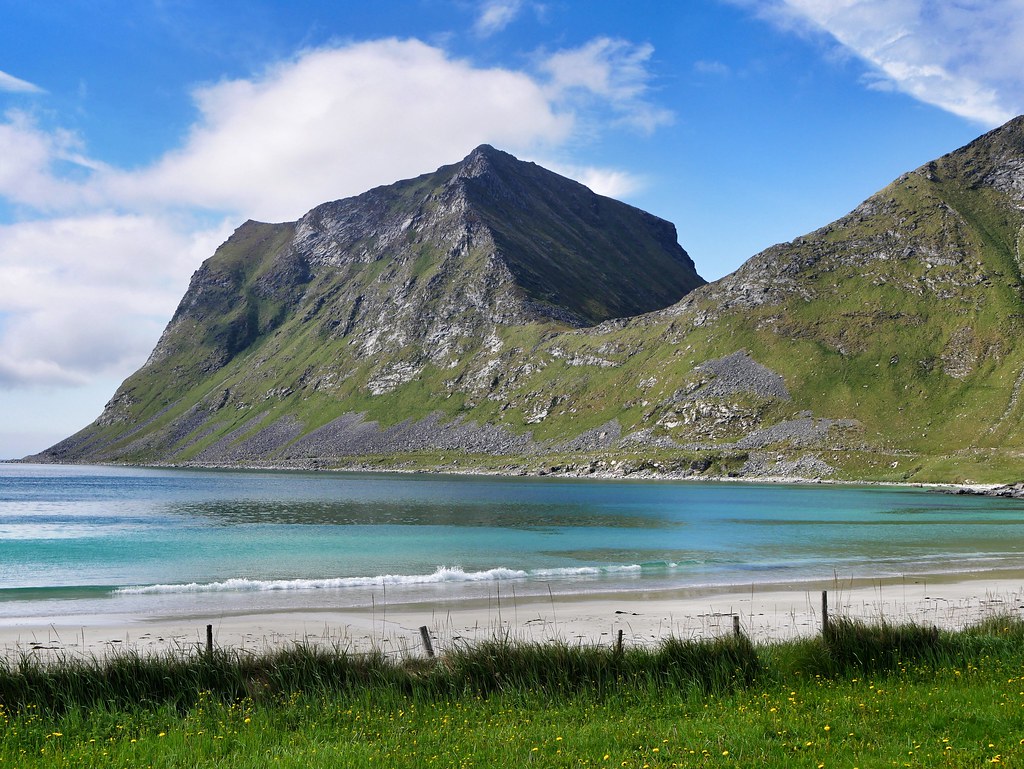 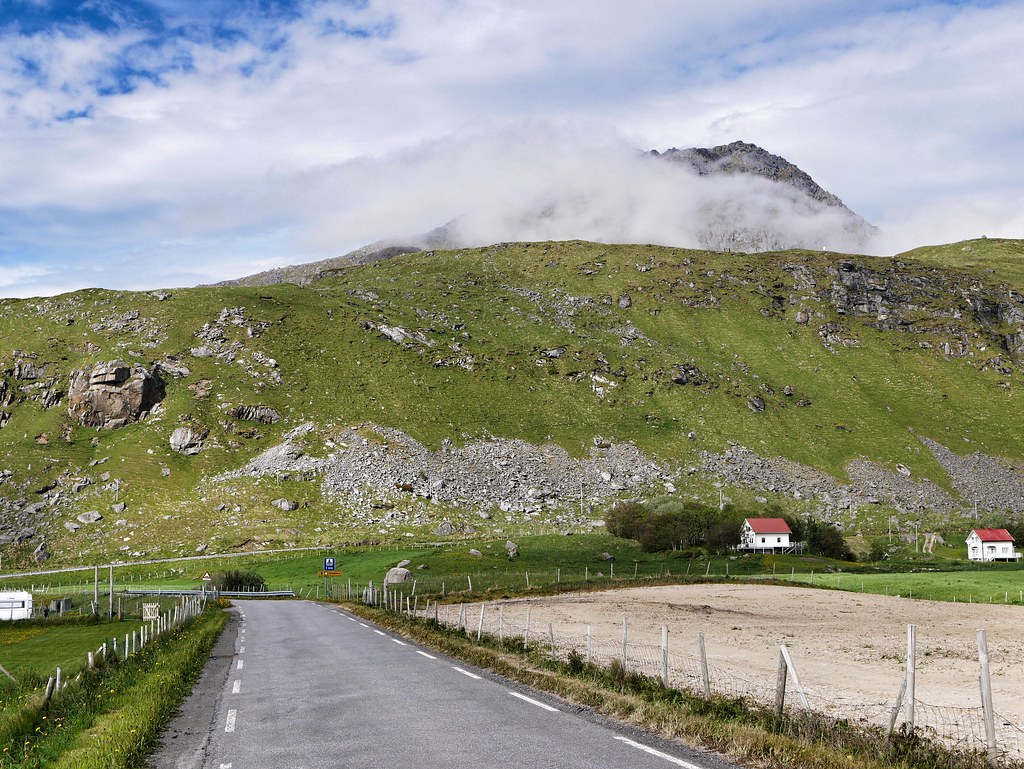 We were dropped off in a pullout after travelling only 10 of the 60 miles back to Reine. We stuck our thumbs out and hoped it was for the last time. Finally a Taiwanese family picked us up, they were really sweet and we had a nice chat, although it was the 6th car we got a ride with and I was a little fed up with telling our life story. So Craig mixed things up a bit and I almost couldn’t contain my laughter when he started lecturing the family about how strong the Lofoten Lambs were and how they should read all about it in an up and coming book…” three hours later and we were home. And on that note, it’s time for us to say goodbye to not only the Lofoten Islands but also to Norway. After 6 months of volunteering in what we consider to be the most beautiful area of the world, we’re heading home for a quick bag change as the temperature is about to go from 10 degrees to 40+. It’s out with the woolly jumpers and in with the breezy dresses as we head to Central Asia for four months.