While we’re in the Lofoten Islands we’re helping our hosts set up their kayak business. Craig’s been doing lots of carpentry work while I’ve been painting and chipping in with logo ideas. Before things kick off with the busy summer season though, we’ve been taken out on a few kayak trips.

On our first trip, almost a month ago in mid May, we didn’t leave the house until 9pm. In most countries that would seem like an odd time to start kayaking, but in the arctic we have the midnight sun and endless opportunities for outdoor activities.

We carried the kayaks down to the small marina and slipped our bodies off the jetty and into the kayaks. The conditions were perfect, it was really calm and actually quite hot in our dry suits even though it was only about 5 degrees outside. I was struggling to adapt to the kayak which was designed for professionals and moved with your body. So every time I veered one way I’d end up over compensating my paddling and zig zagging all over the place. We passed under a small bridge and entered the larger fjord with huge mountains surrounding us. The clouds were beginning to turn yellow as the sun slowly dipped behind the huge peaks. It was difficult heading directly towards the sun with it glaring in my eyes, but even more challenging when it was behind us and I had to continuously turn around to check out the sunset, causing my kayak to wobble and fear to rush over me that I might capsize. 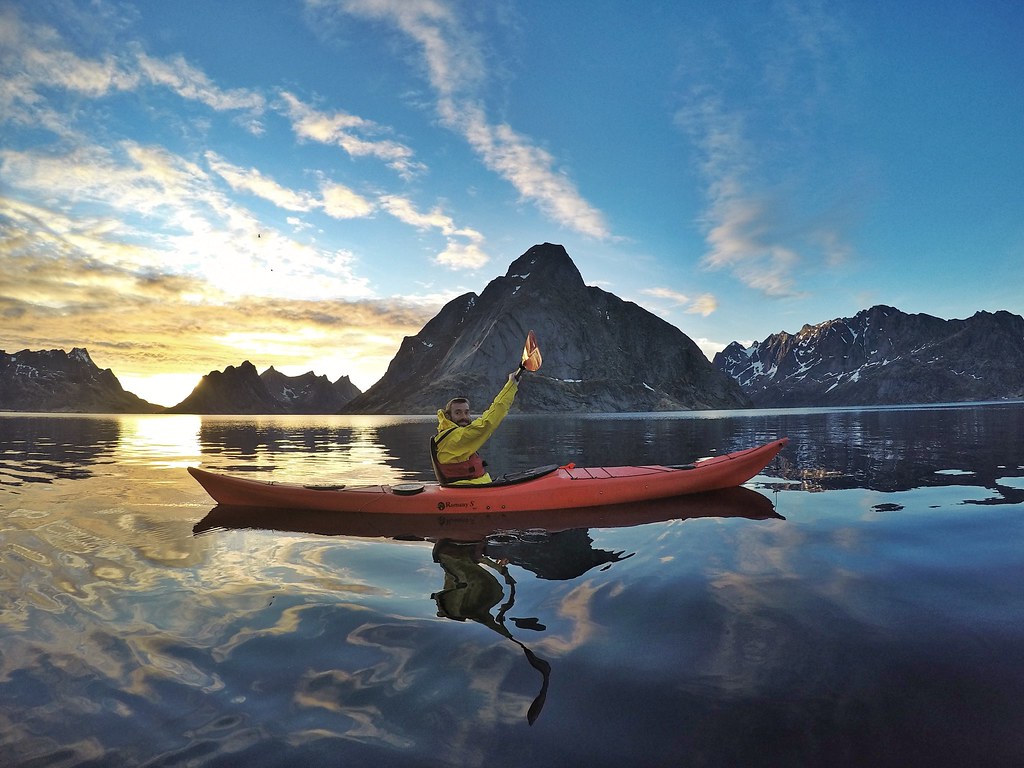 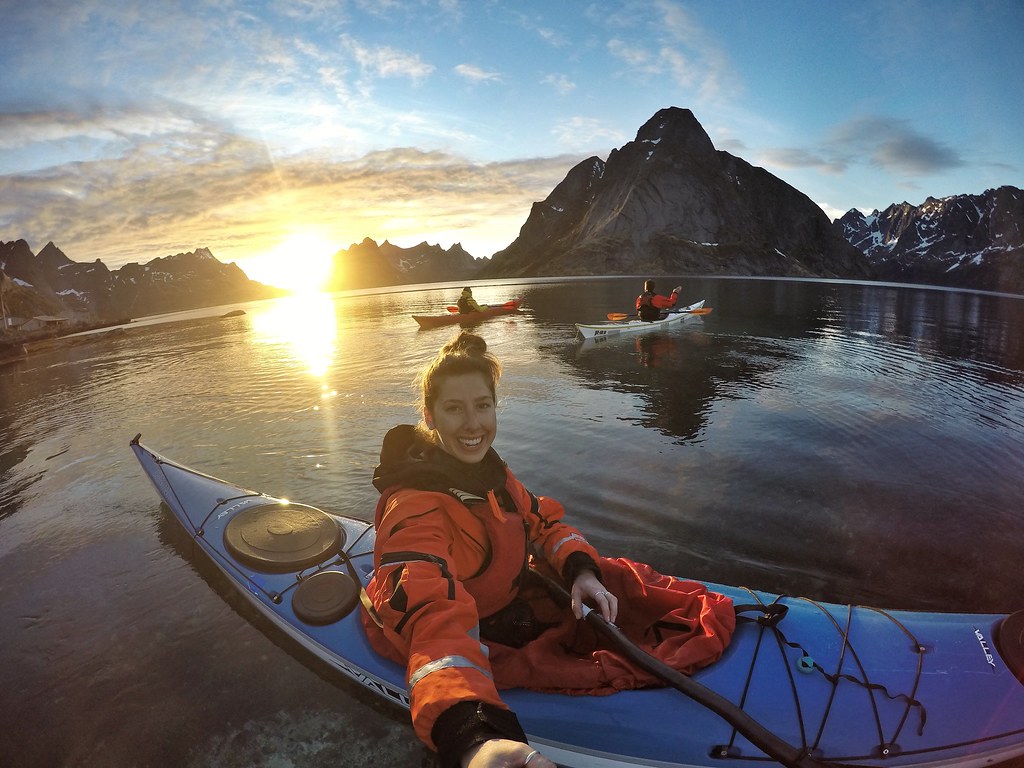 The peaks were reflected in the water and the movement from my kayak created beautiful ripples through the glassy water. My favourite part of the trip was when we passed under another bridge where the water beneath us was black with swarms of fish. Orcas come to these waters to feed and we saw them a week or so before, swimming under a bridge in front of our house, so we were desperately hoping to bump into a pod. The fish all dispersed and the sea shallowed around Sakrisøy Island. The water was a fabulous turquoise even in the low light and the ochre coloured rorbues reflected in the water. Big moody clouds had streaks of yellow and orange through them which perfectly match the theme of the village. 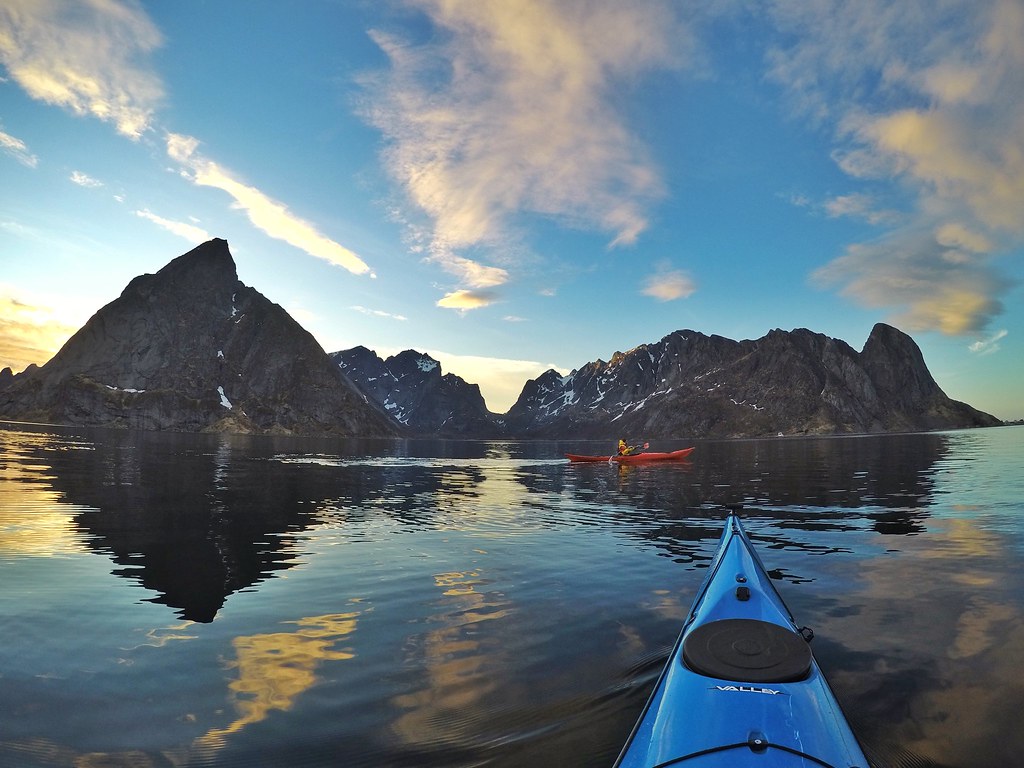 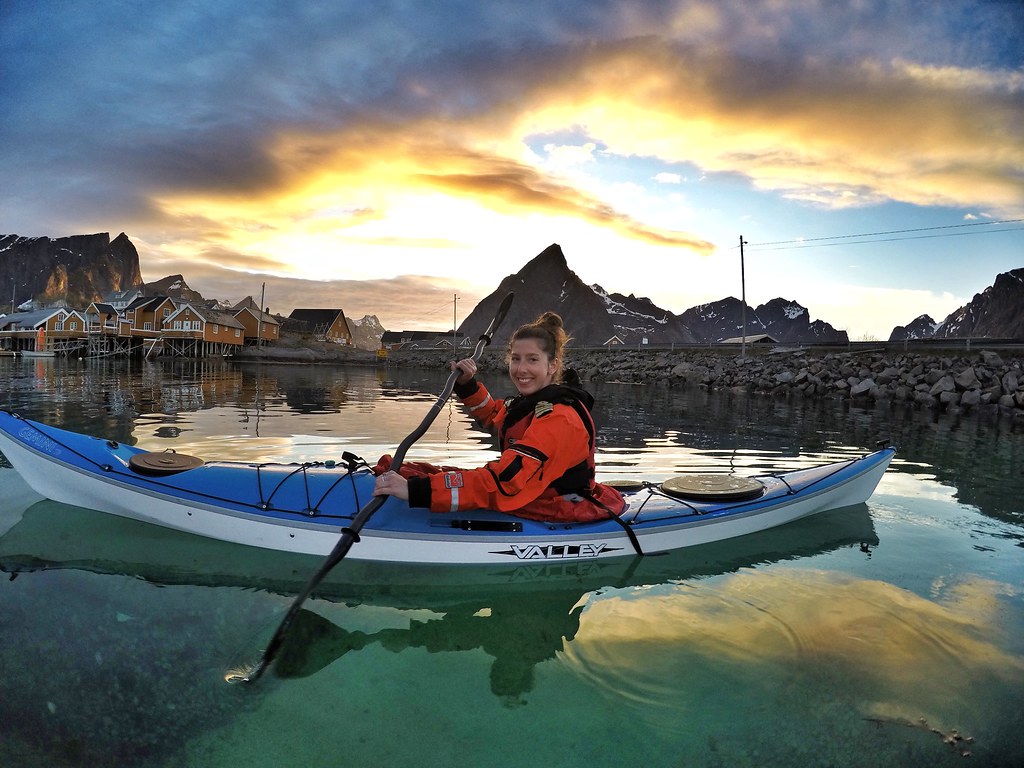 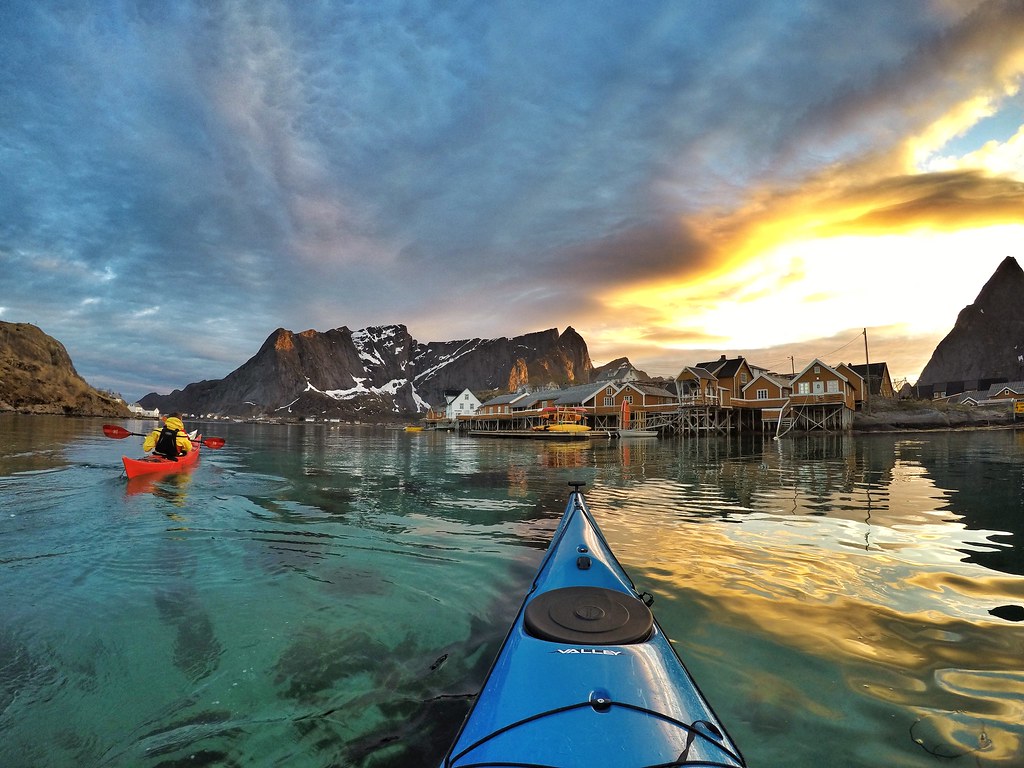 Our host suggested a detour into the open sea, to a lighthouse on an island so off we went. As soon as we left the protected fjord however, the conditions quickly changed. It wasn’t choppy sea, but it was moving up and down in very slow movements. It’s the perfect conditions to get you feeling sea sick and it was doing exactly that for me. I was trying to paddle into the water at the correct angle as each ‘wave’ raised us up a couple of feet before we came back down. It was weird as the water was moving in this way yet the surface was glassy and flat. I didn’t feel too safe in that water so I was happy when the others said we should go back. As we turned our kayaks the big swell pushed us home and we were sort of slowly surfing our kayaks to the shore. We finished the trip at 11pm when the sun was very low and the sky filled with pinks and greys. 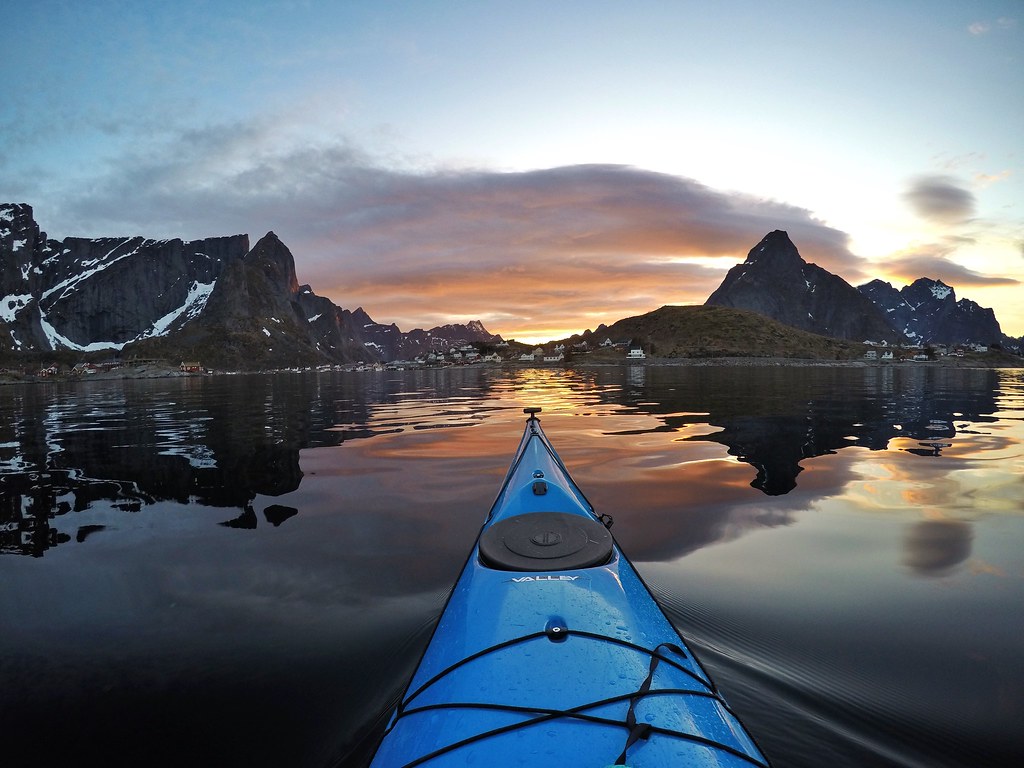 Our most recent kayak trip, in early June was a slightly different experience. Our hosts have new double kayaks so we got to test them out. It was quite a chilly day and I looked like a complete joke when I prepared myself with a vintage woolly jumper, matching crochet skirt, water boots and my working coat covered in paint. 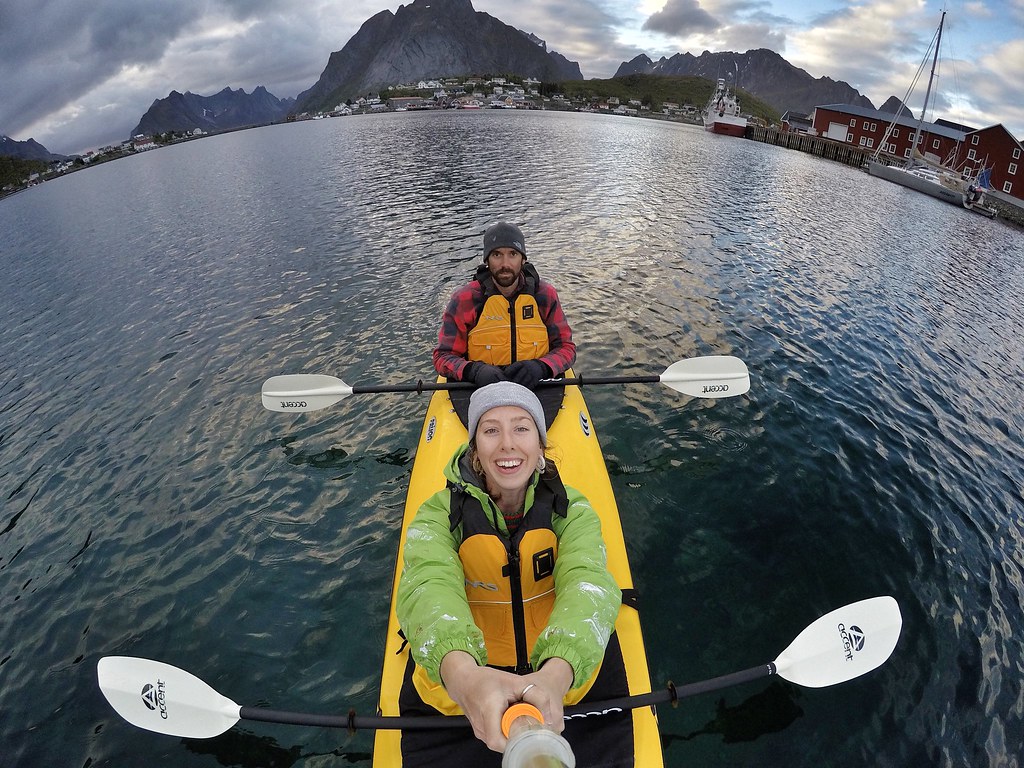 I much preferred the double kayak, it was really sturdy like a boat, the seats were comfortable and I could take photos while Craig paddled. Craig didn’t agree to that but he didn’t have any choice in the matter. When we both paddled though we really picked up some speed and we could keep our momentum by using the peddles inside the kayak to steer us as appose to using our oar to direct us. 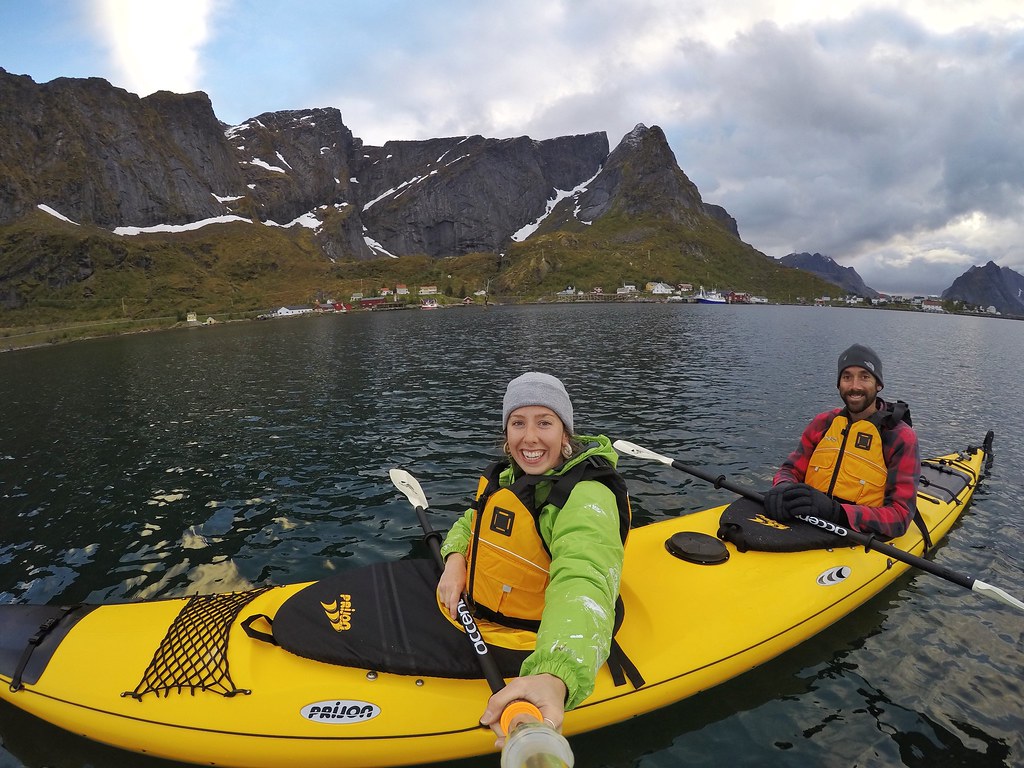 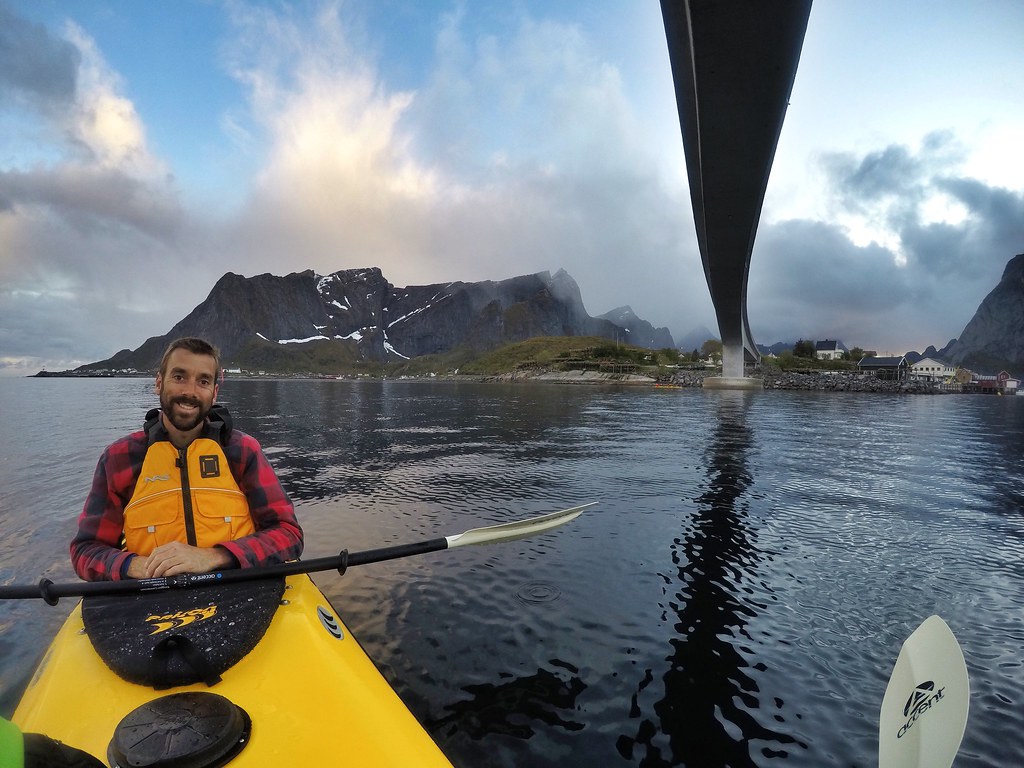 It wasn’t perfect weather this time, the sea was fairly calm but a storm was brewing on the horizon. We set off at about 10pm, heading away from the black clouds. We paddled under the large bridge connecting two islands and then we created a loop route by heading for the storm. It was looking absolutely beautiful though, the sun was piercing through the dark clouds and turning all of the incoming mist into a orange haze. We had nothing but wild mountains ahead of us, with huge peaks shaped like giant Hershey Kisses. The sea quickly became rougher, with waves lapping over the front of the kayak and splashing onto my spray-skirt. We watched the rain move towards us, falling in lines from the sky and splashing on the dark sea until it was surrounding us. It was quite refreshing actually, and suddenly my cold hands actually felt warm, and when my hand went into the choppy sea the water didn’t feel cold anymore. The rain left as quickly as it came though, and we paddled under a patch of good weather, with fresh stormy skies brewing again in the distance. We ended up paddling until 12am, but the sun never sets now, it just lingers above the horizon and then swoops back up. 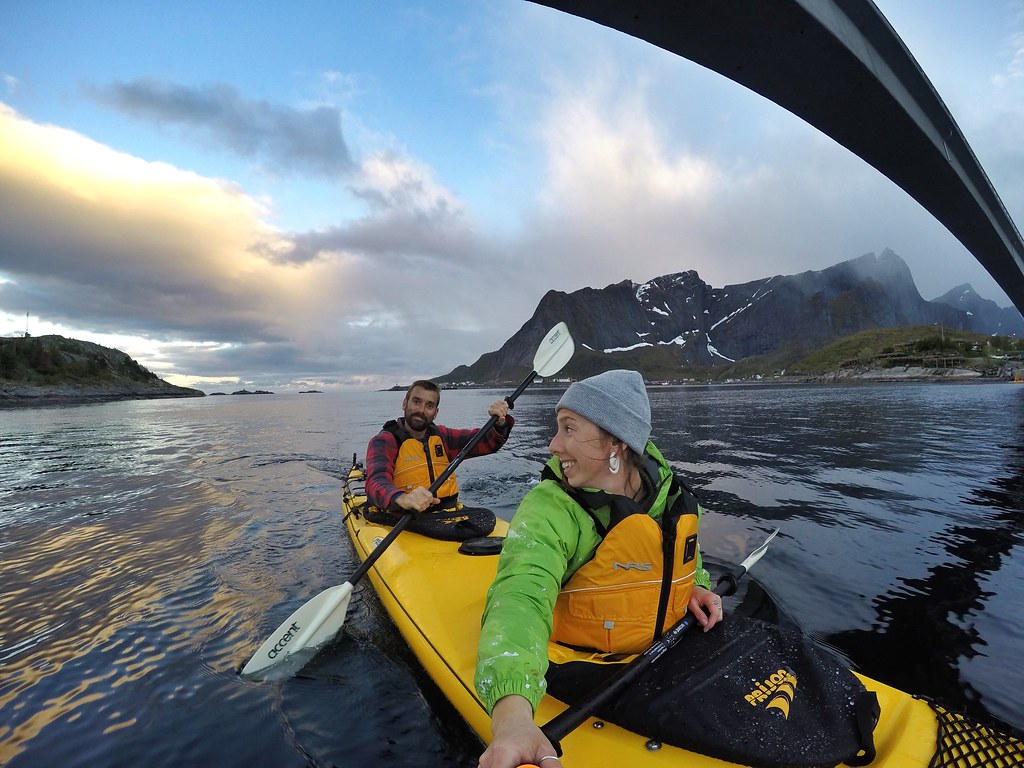 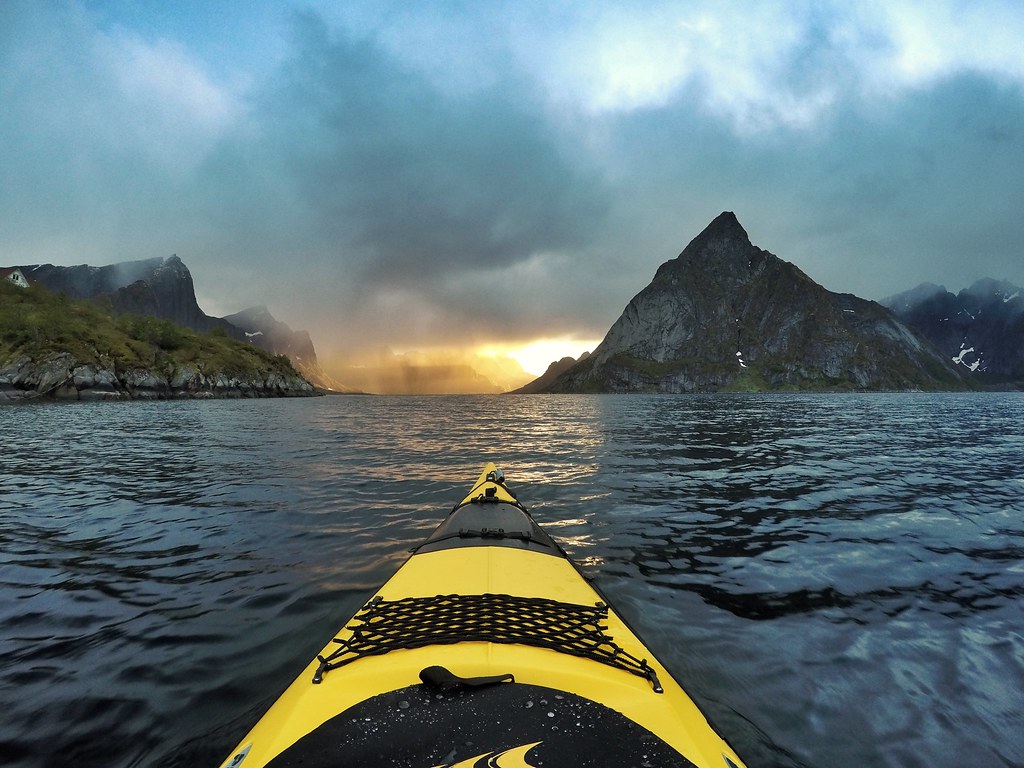 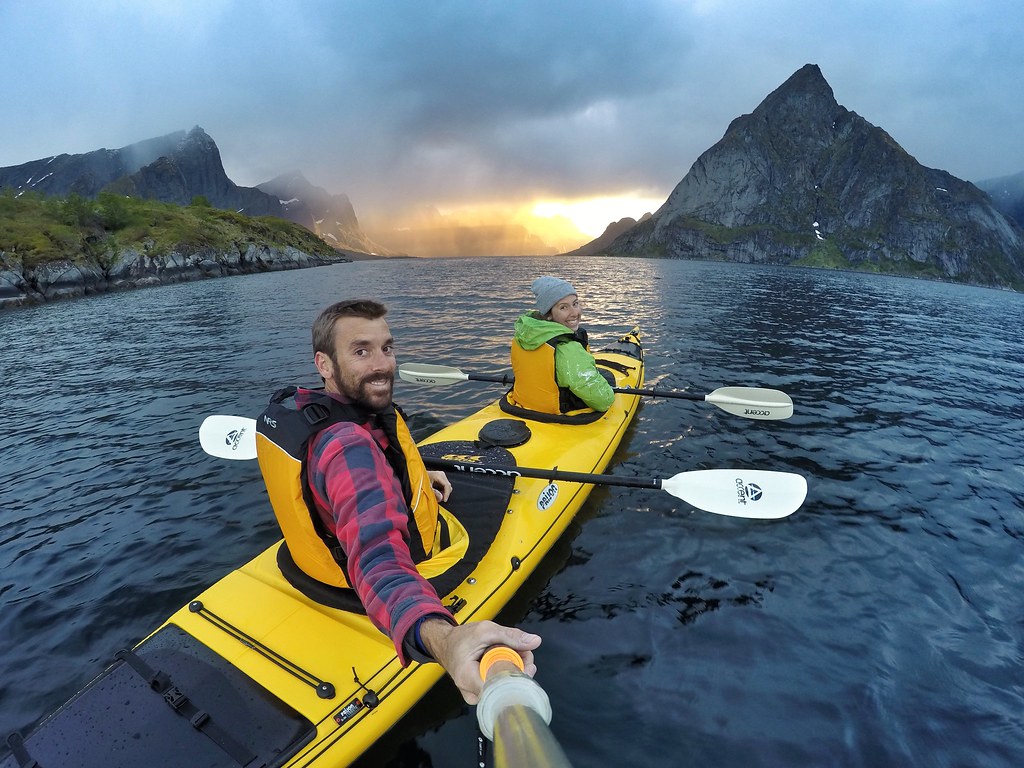