We had a very long sleepless night travelling from London to Almaty, Kazakhstan, for the start of our Central Asian adventures. Craig seemed to start the trip in a particularly clumsy manner though. The first incident was when we were queuing up along the aisle of the plane, waiting for everyone to put their bags in the overhead compartments and sit down. Craig rested for a moment and casually lent against the wall, but it turned out to be the toilet door which folded in half and gave way causing him to dramatically fall into the bathroom in front of everyone. Then, during our dinner he opened an oily dressing and it squirted all down his shorts…We had a two hour stop in Istanbul where we stood around a tiny bar to watch the England vs Columbia game. The next flight was pretty gruelling, heading east we lost so many precious hours of sleep. I managed to drift off for a brief second and then I heard Craig faffing about and mumbling swear words – he’d spilt his beer all down his crouch and it looked like he’d wet himself. I pulled my eye mask back down and left him to it.The sun quickly rose and every time I looked out the window I just saw barren desert below us. As we got closer to the south eastern corner of Kazakhstan some agriculture appeared with patch-quilt fields of crops. Rivers flowed down and created lush green surroundings on either side. Then the ground became brown with wrinkled hills and valleys, rain must gush down the dry cracks in bad weather. Snowy peaks lined the horizon and that’s exactly why we were here, to hike around a lesser known yet dramatically beautiful area of the world. 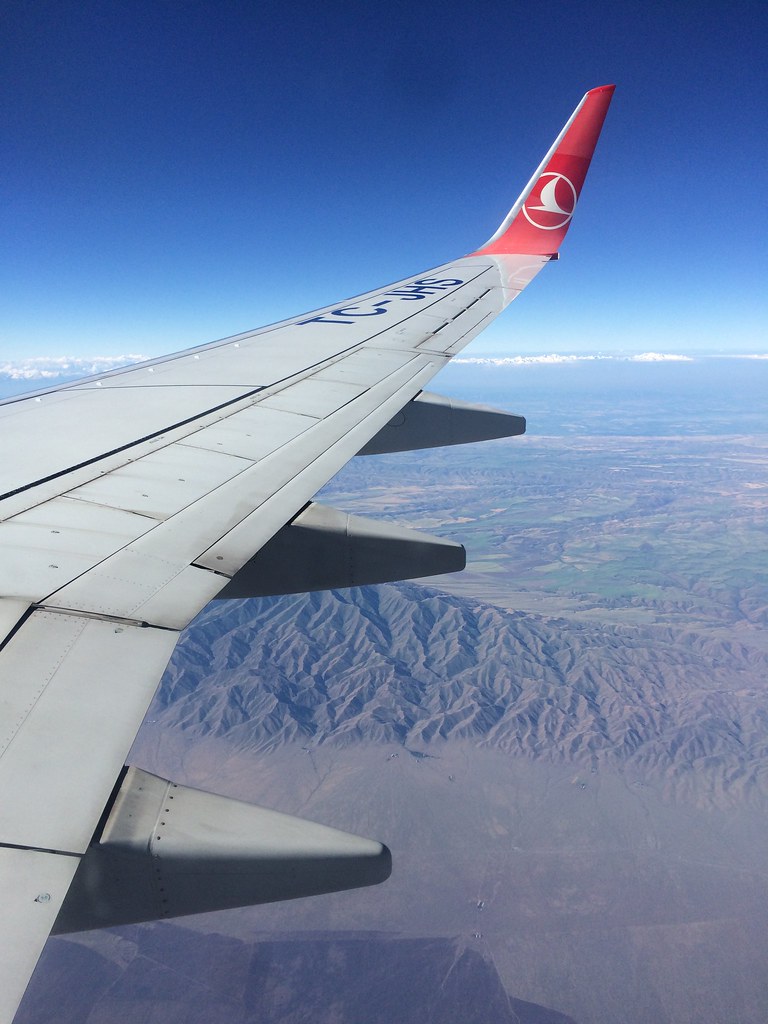 I read online that it was an easy two hour hike, so we planned to make a big loop hike and climb up Mount Kumbel. As soon as we set off though, we realised it wasn’t going to be like the hikes we did in Norway. It was sweltering and the altitude was making the incline unbearably tough. But with wheezy breathing we plowed up a muddy track alongside some amazing, wild meadows. The place was full of life with lush greenery and flowers blooming everywhere. Butterflies were clumsily flying around us while bumblebees collected pollen. It was a really beautiful place, even on a cloudy day. 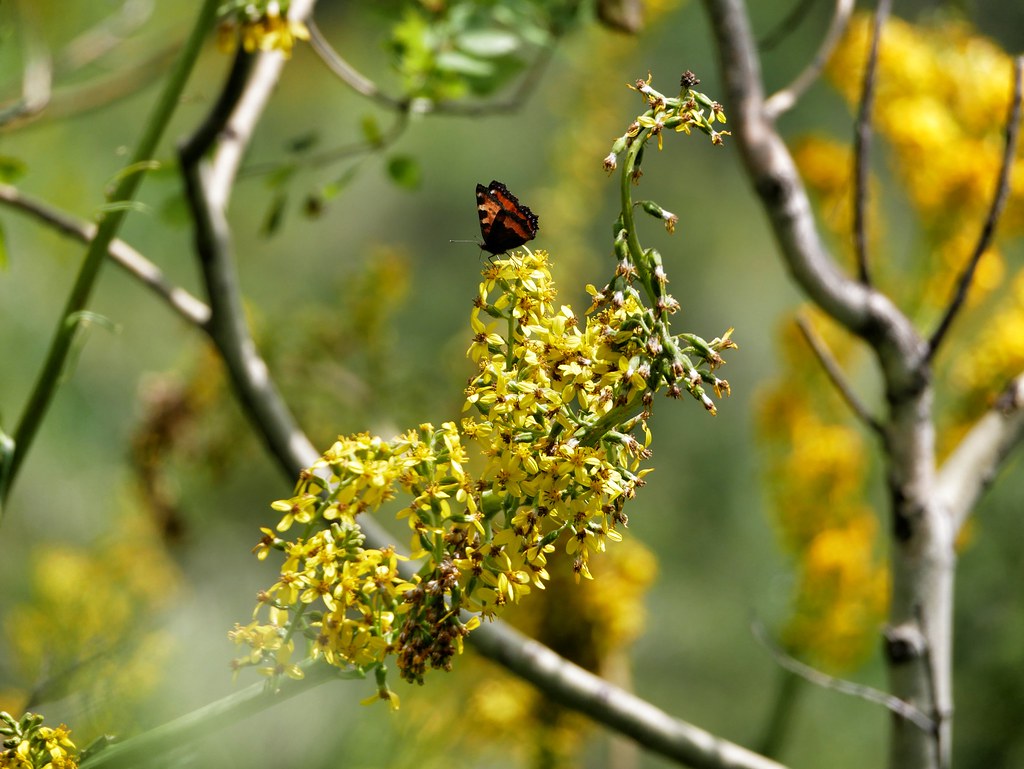 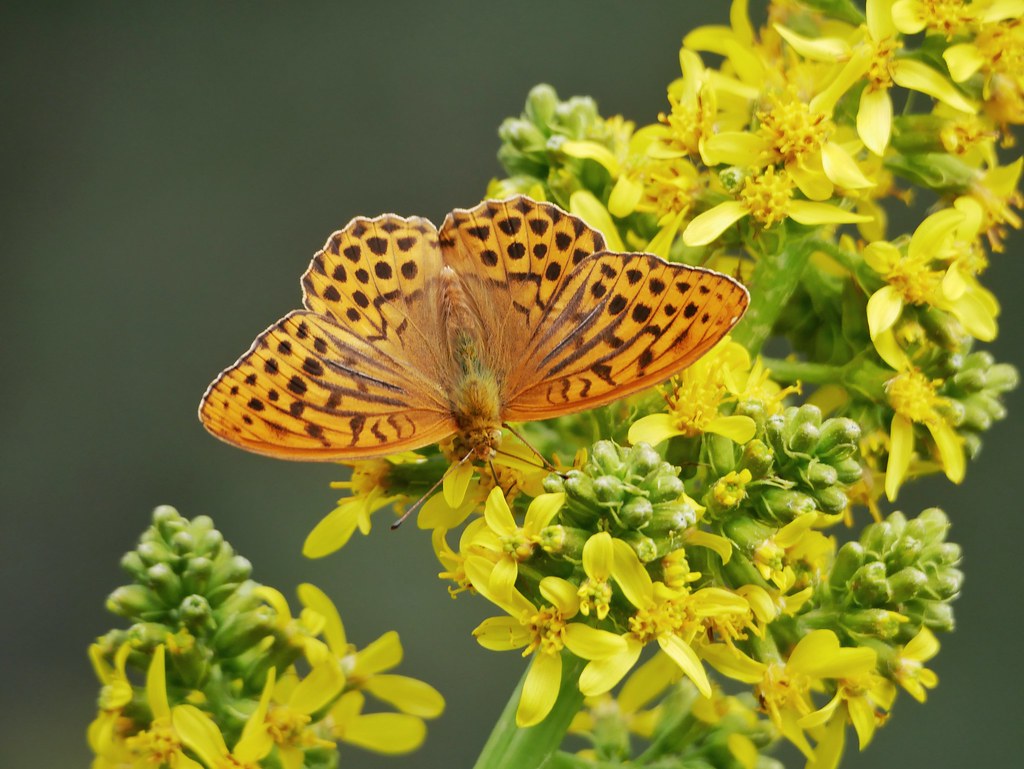 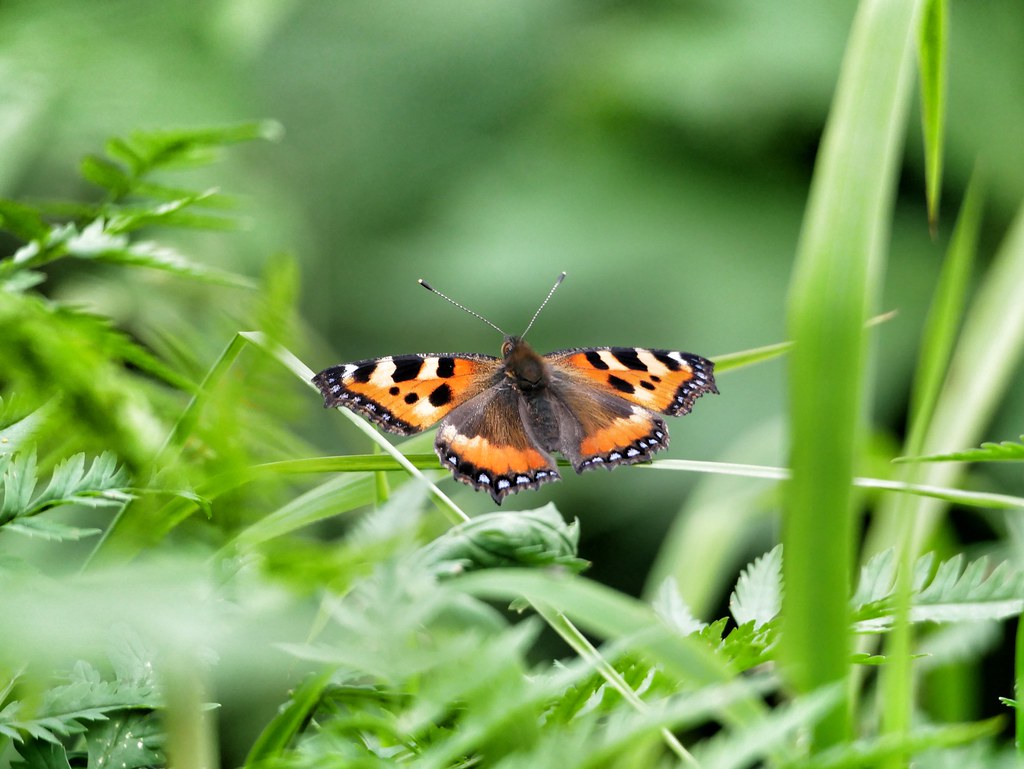 It seemed to be mainly locals hiking up, and we noticed a few of them had collected rubbish from the trail which we thought was very good of them. The climb eased and we had mountains and green pastures all around us. When we reached Kok-Zhailau there were quite a lot of people hanging around, along with a big group of wild horses. They’re obviously owned by a local and they just let them roam the hills. Horse meat and milk are popular items on Kazakhstan menus, plus the animals act as transport so they are very handy! 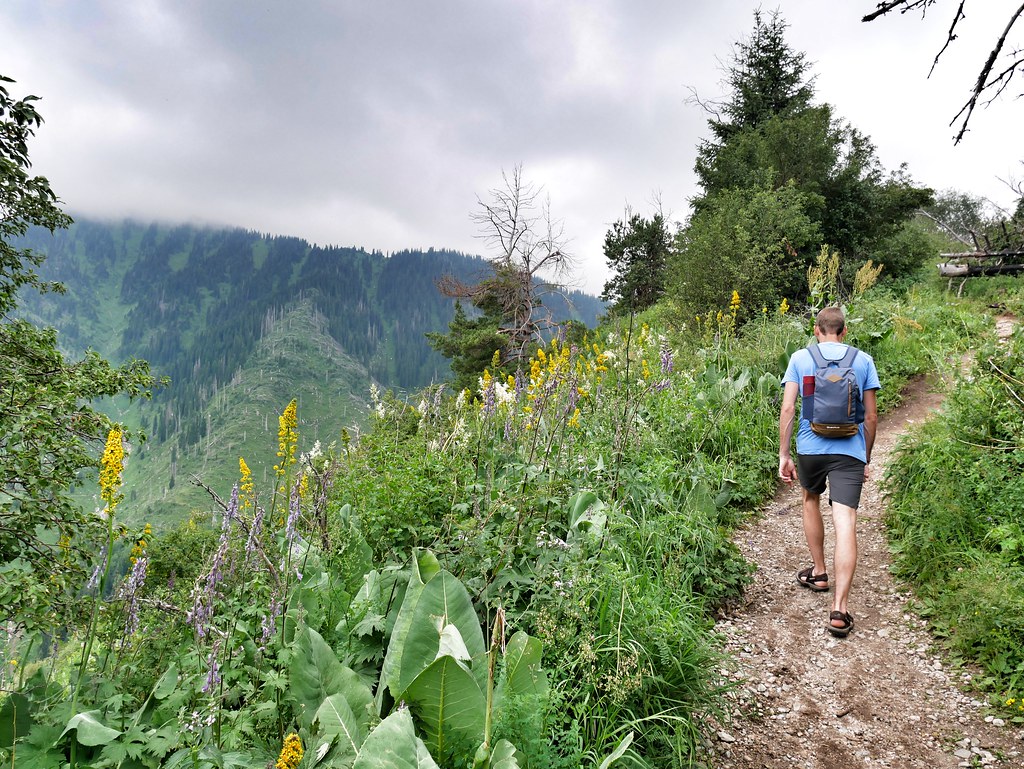 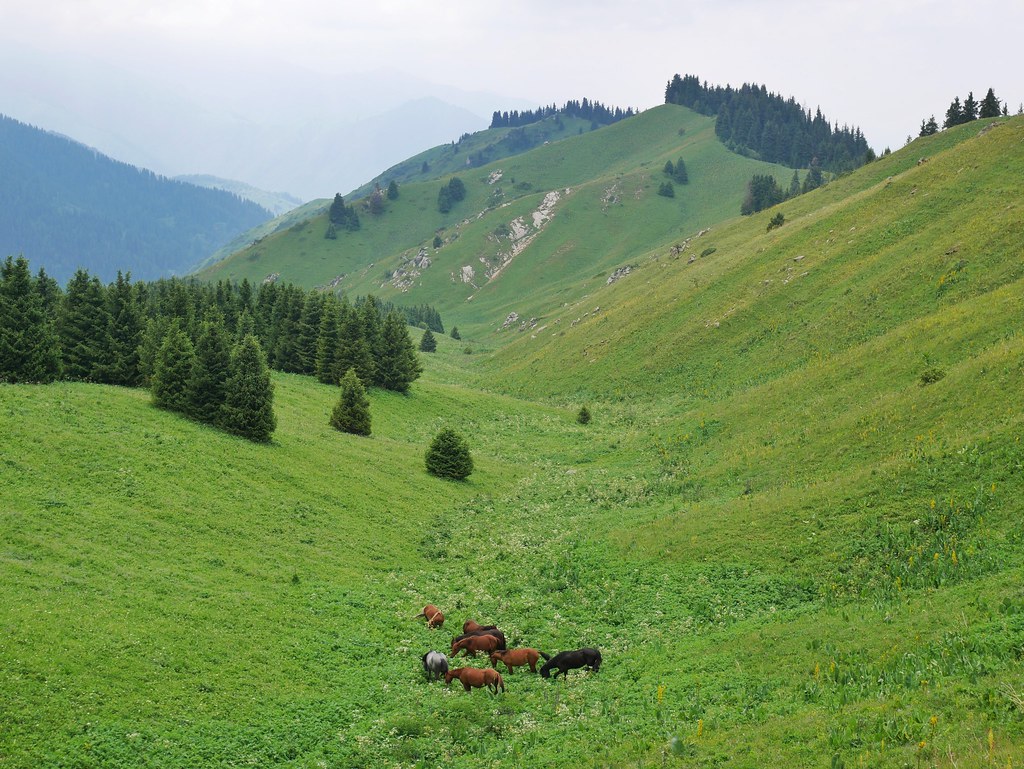 We were feeling pretty shattered after hiking for over three hours but we wanted to accomplish more so after lunch we continued uphill into a new valley towards the Three Brothers – this is where three rocks rise out of a mountain. We got a view of them before the clouds rolled in and we were surrounded by millions of purple flowers, so it was worth the detour but we were exhausted and couldn’t make it any further, it was time to head back down. As we did so we heard loud thumping and turned around to find a group of horses galloping straight for us and we had to hide behind a rock! 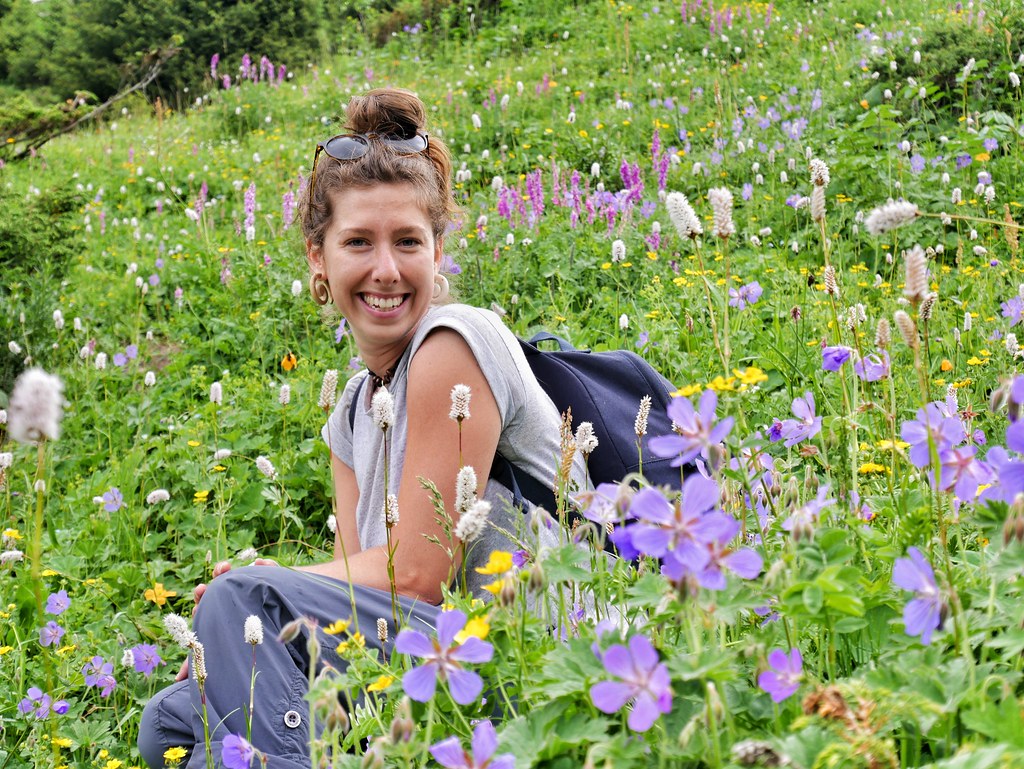 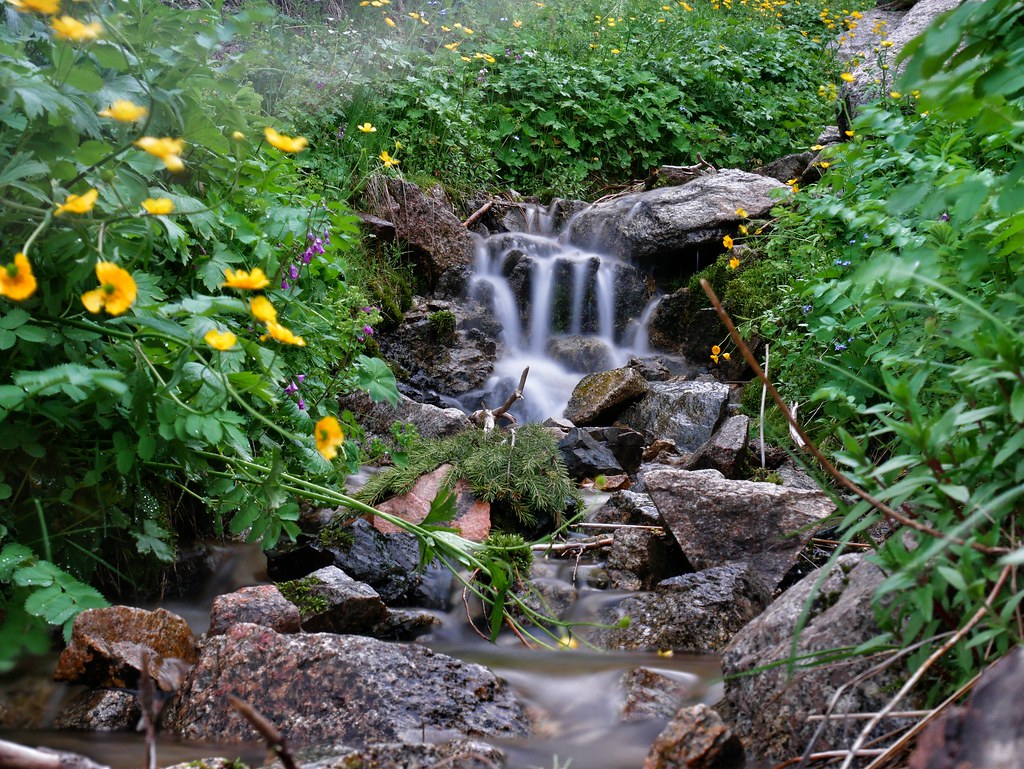