It was a perfect day for an 8 hour hike in the mountains – the sky was blue, the birds were tweeting and a gentle breeze rustled through the trees. We were going to hike up Veinestinden, and with an elevation of 730m it made it the highest mountain we’ve climbed in the Lofoten Islands. It was an unusual mountain, long and flat at the top with a gentle slope rising to the peak, but even though it was a plateau, the edges dramatically collapsed down hundreds of meters on three sides. 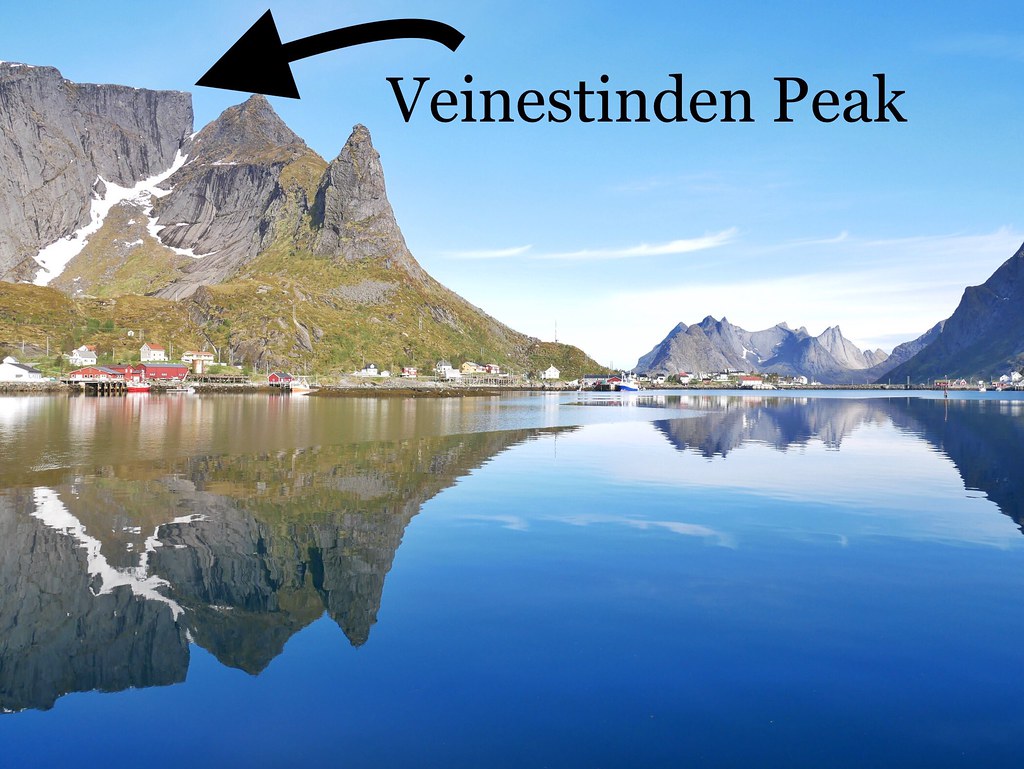 The hike began along the southern side of the Djupfjorden. It looked unlikely for there to be a trail along the steep, forested edges but we found one. It was up and down through the woods, with lots of muddy patches, rocks and branches to navigate around. It wasn’t exactly a fun start but as we approached the end of the fjord it was 100% worth it. The water was completely turquoise until the fjord deepened and it faded into a deep blue colour. Mountains rose up around the fjord and a waterfall plummeted down the cliff-edge, it was postcard perfect. In fact it looked like a mix of Thailand and Norway. 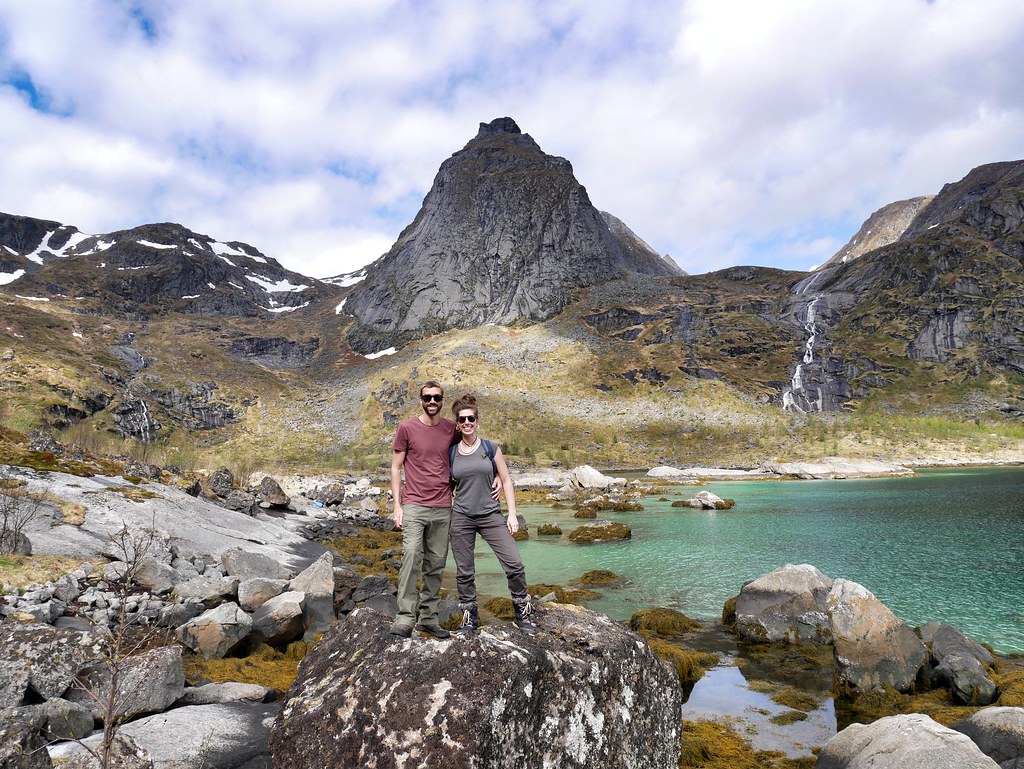 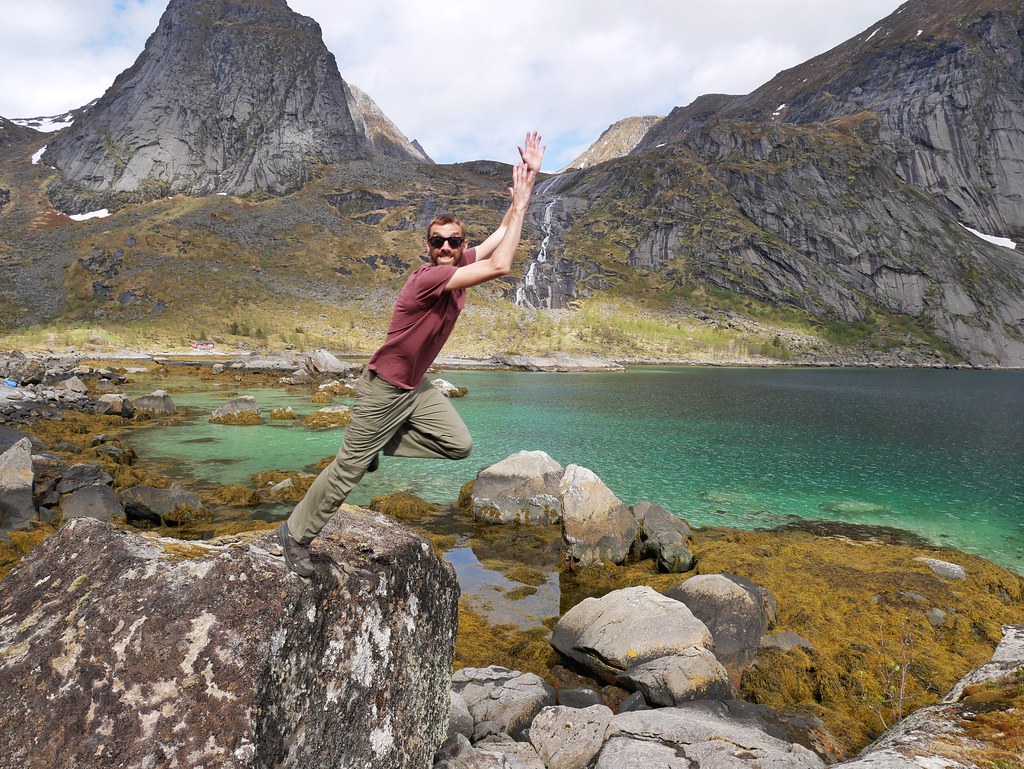 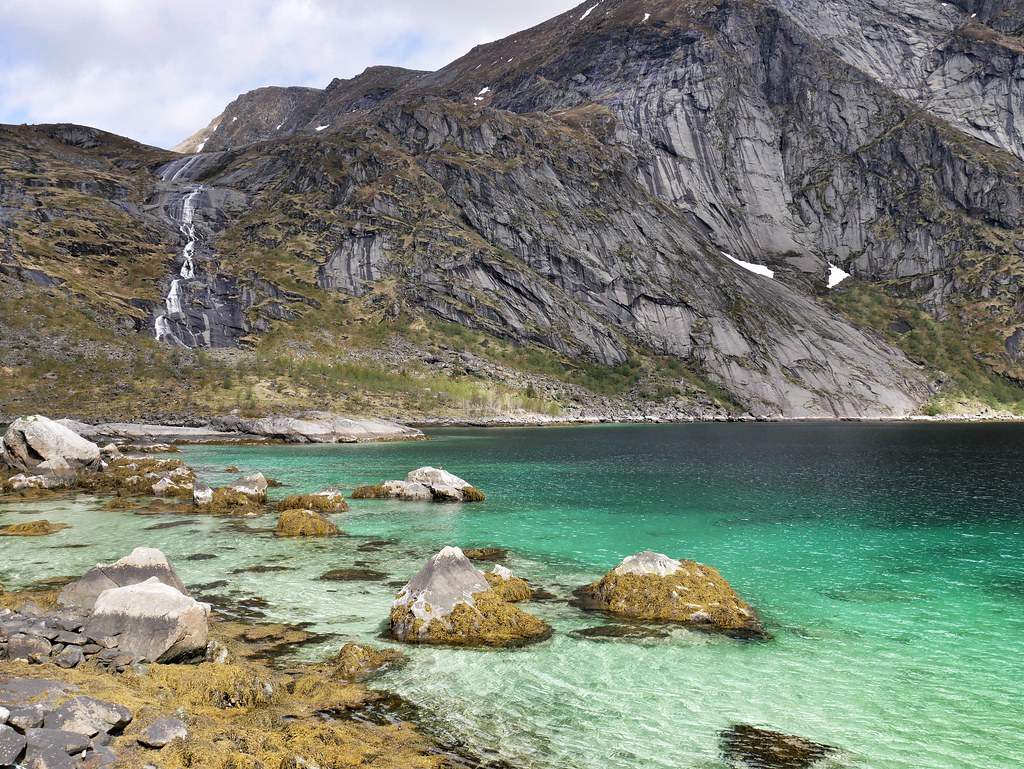 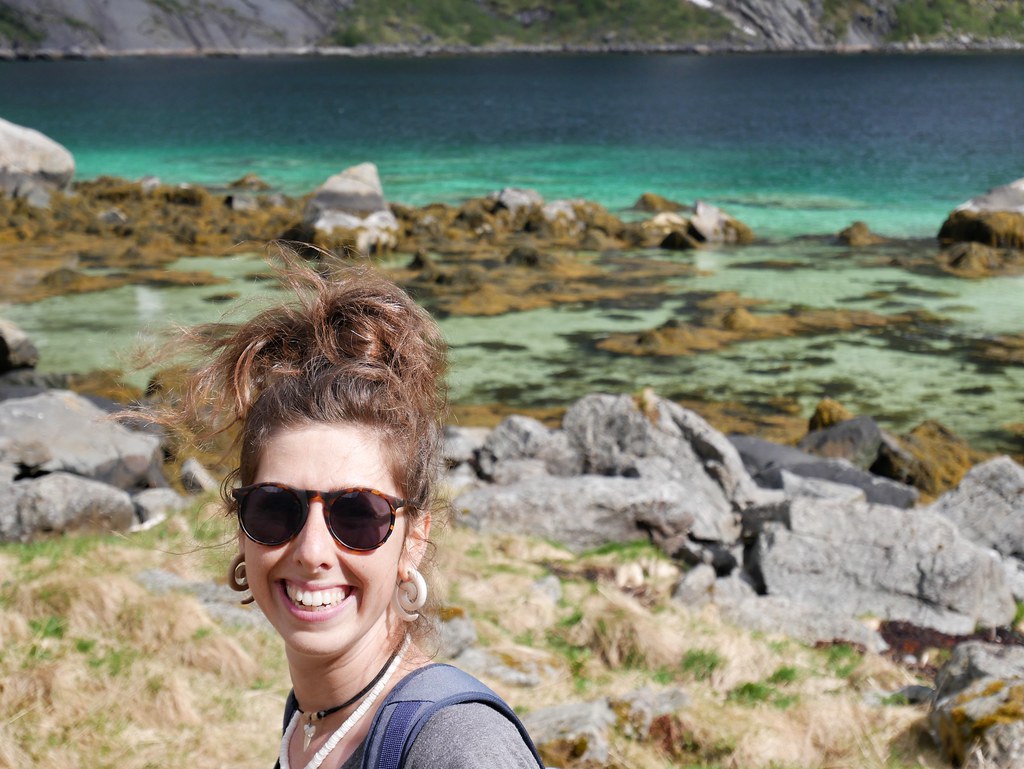 We passed a private red cabin at the edge of the fjord and then we began the climb up. It wasn’t a well trodden route, sometimes there was no trail, and there’s absolutely no signage, so it’s a good hike for adventurous souls. The terrain was bizarre with mossy areas, a faint mud track and then huge sheets of rock slanting down the mountain-side. They were a little slippery with water trickling down and one section we had to traverse one of the slabs, walking along a 2 inch crack and hoping we didn’t slip 200m down to the fjord. The waterfall was now on our right and it was really pretty with a wide sheet of water falling along the rock face. Sometimes it was interrupted by rock pools and then it continued down. 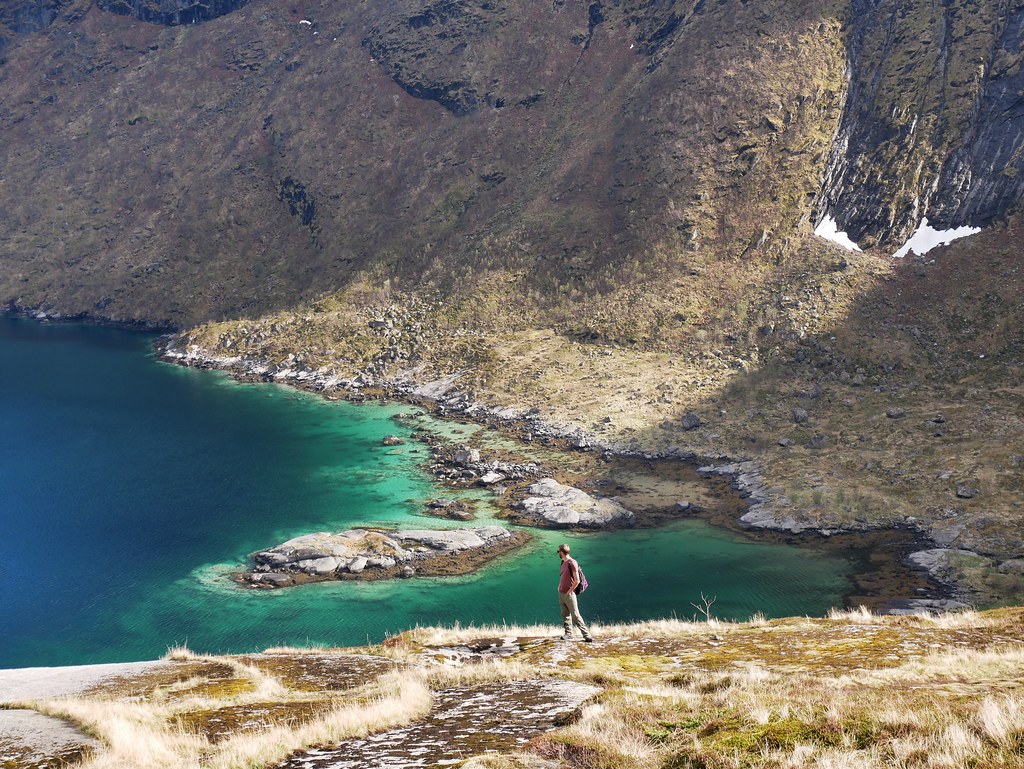 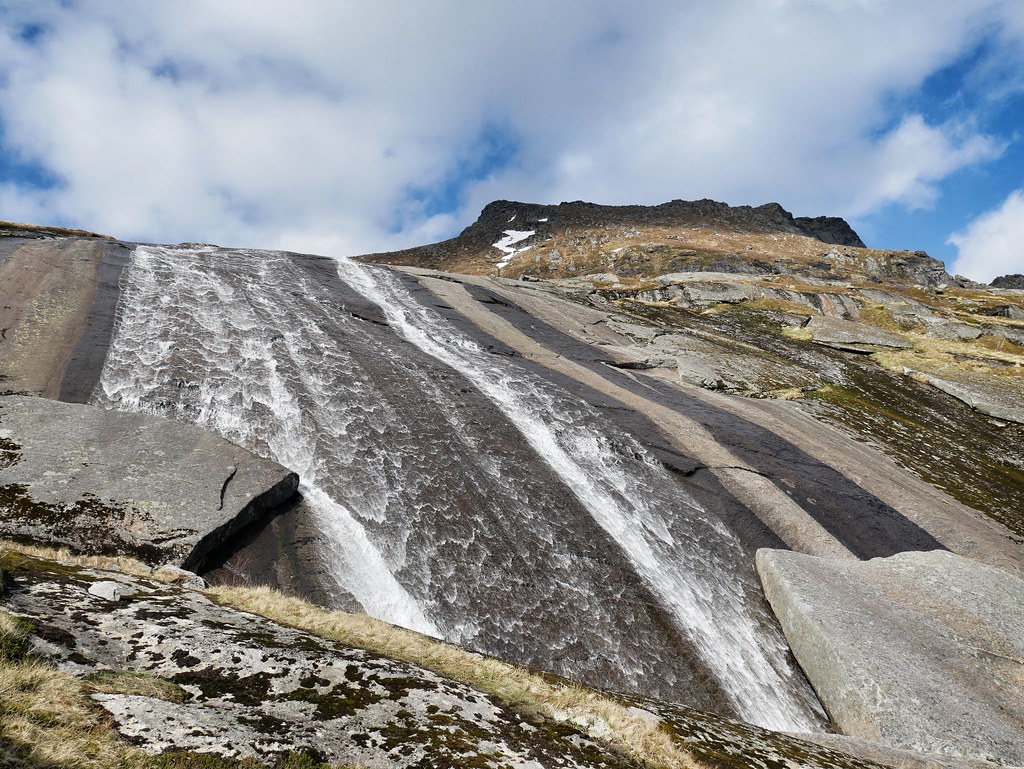 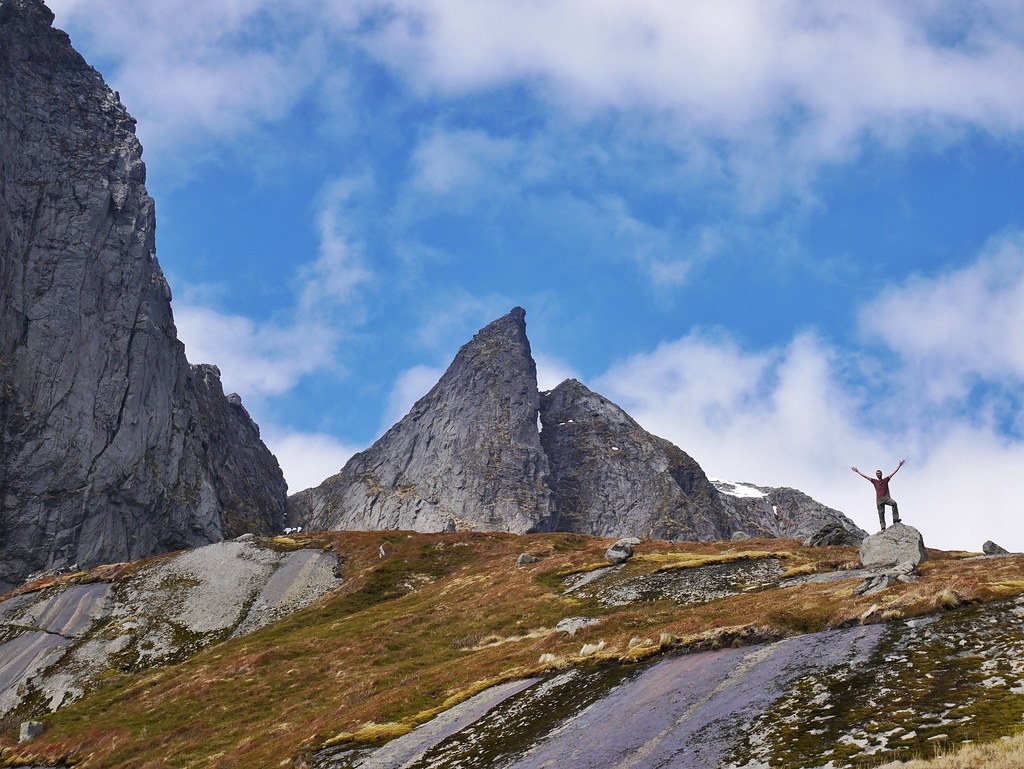 We made it up to a large lake, encircled by incredible mountains which came straight out of the lake in a sheer wall. A couple of lone icebergs floated at the back of the lake and the weather was calm enough for all of the peaks to reflect in the water. We had a risky manoeuvre over the top of the waterfall as the lake spilt over the edge and there weren’t any rocks to step over. Of course we could of soaked our boots and walked fearlessly through the icy water, but that’s not ideal on a long hike so Craig found a small rock which we managed to delicately hop over. 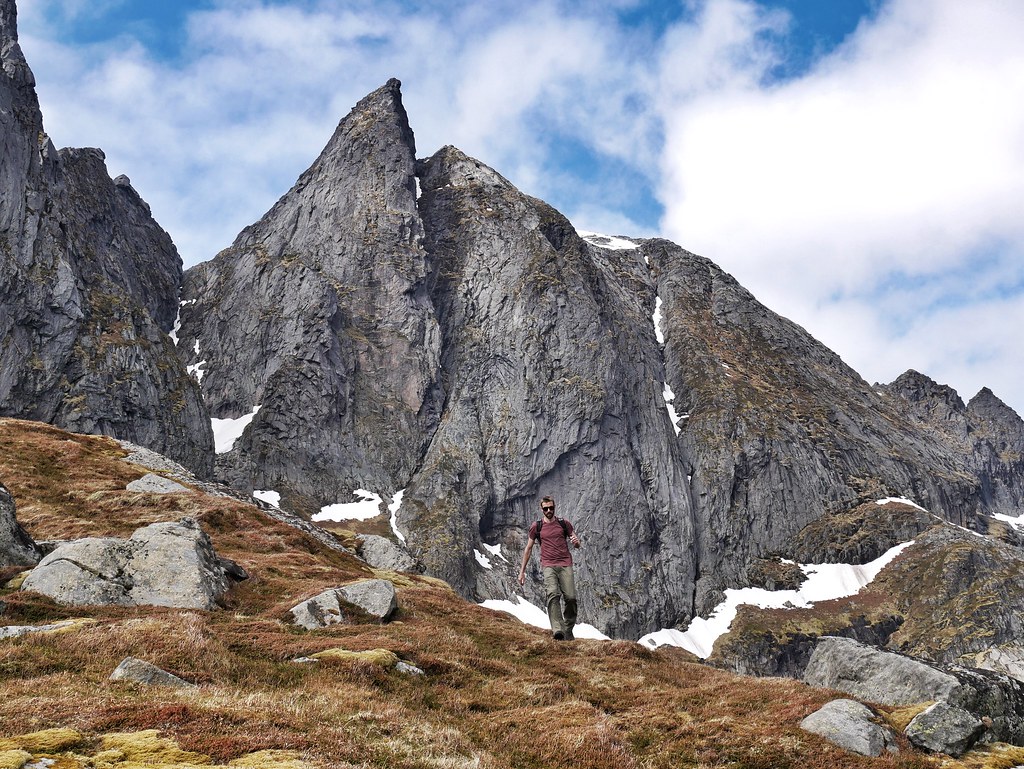 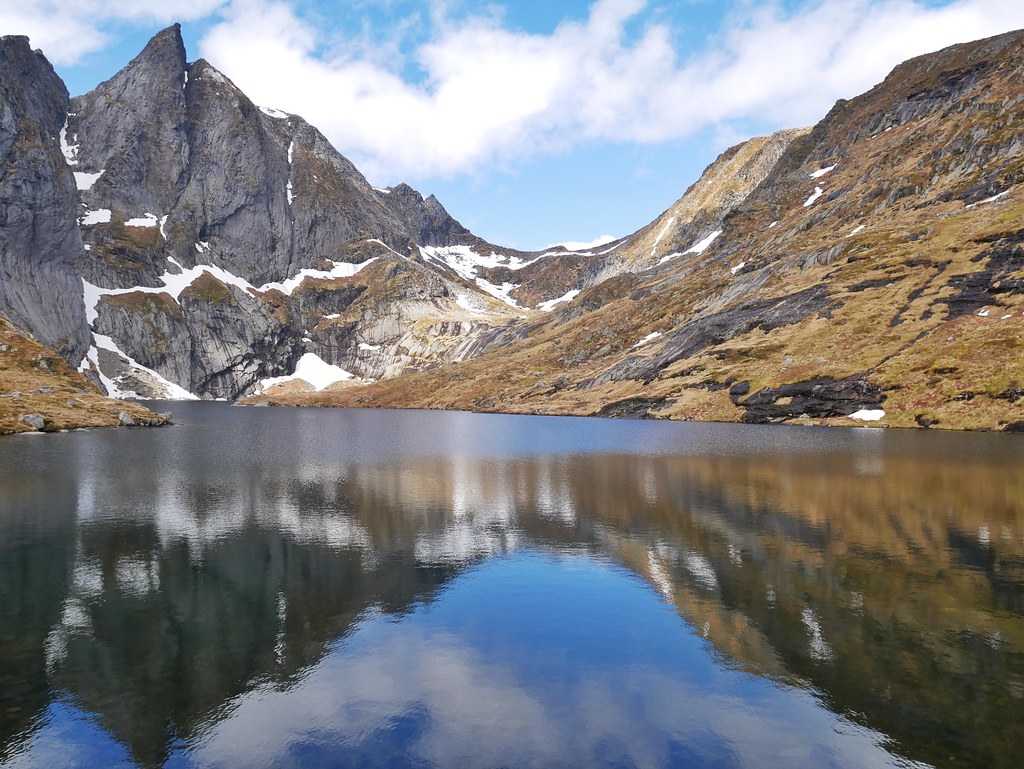 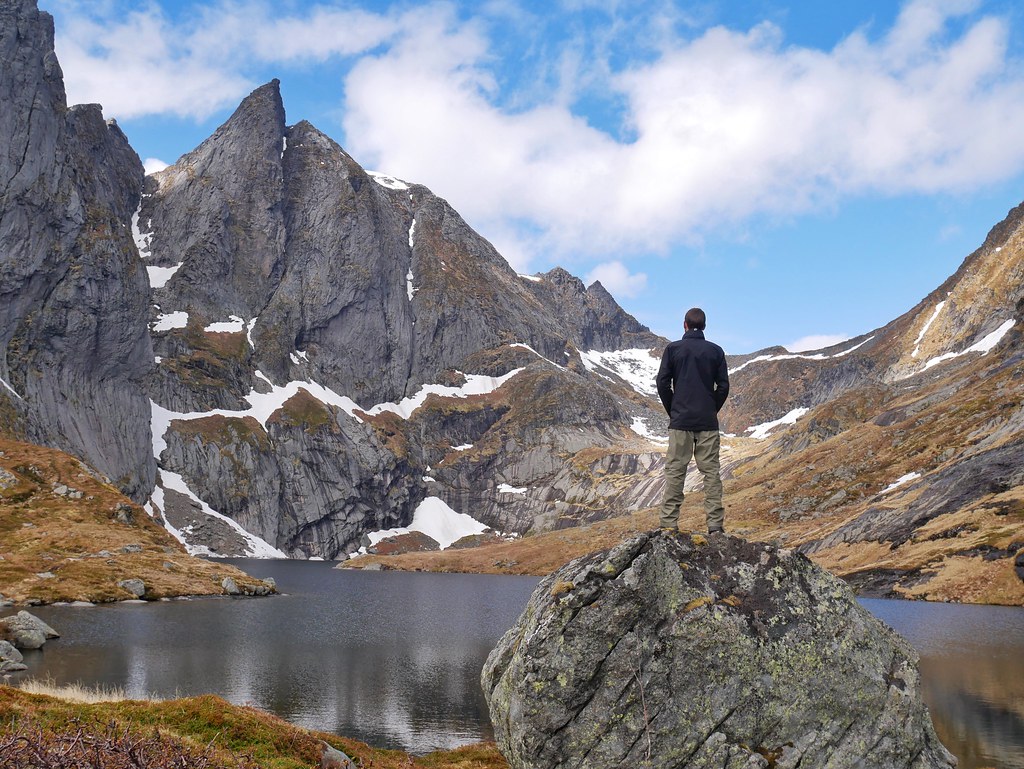 The real climb began after the lake, heading steeply up the mountain and passing three waterfalls along the way. The ground became dry once we were above all of the falls and we stepped onto the plateau. We were the only people around and our footsteps disturbed a ptarmigan which nested in the grass. It frantically flapped it’s wings, but it took awhile to get properly airborne, so it plummet towards the ground and then flapped even harder until it almost flew vertically through the sky. There were still large patches of snow covering the plateau but they were easy to avoid. At the back end of the plateau was a vertigo inducing drop off; about 400m down to a lake and below the lake was the Reinefjord, dotted with all the inhabited islands and we could even see our house. 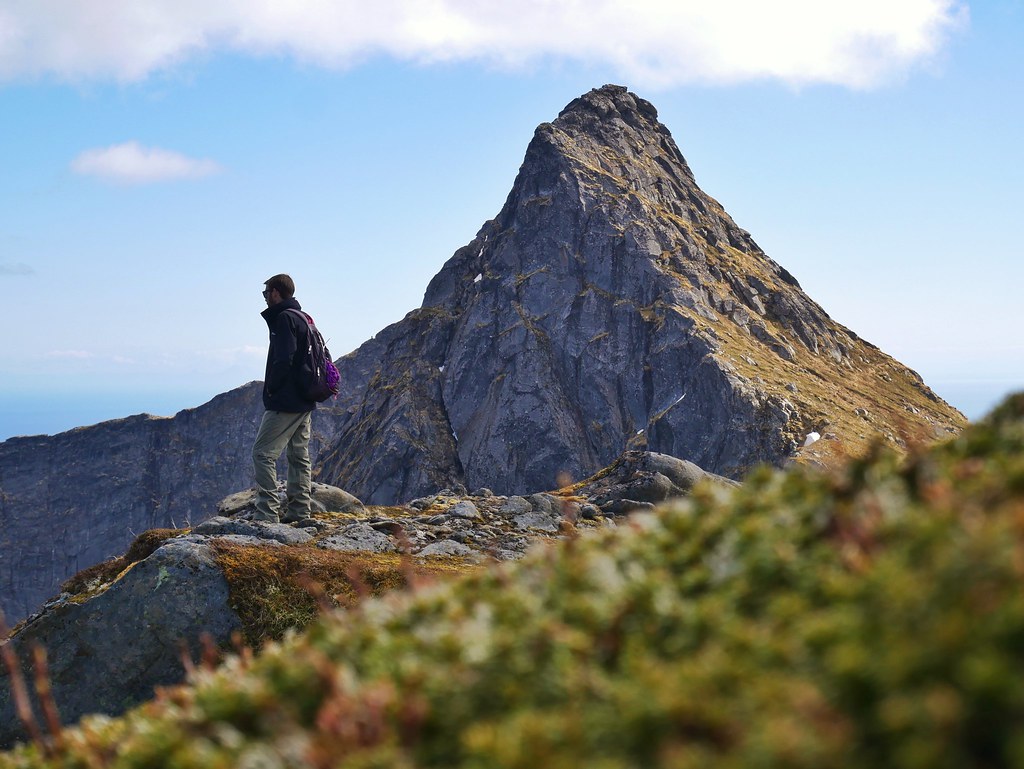 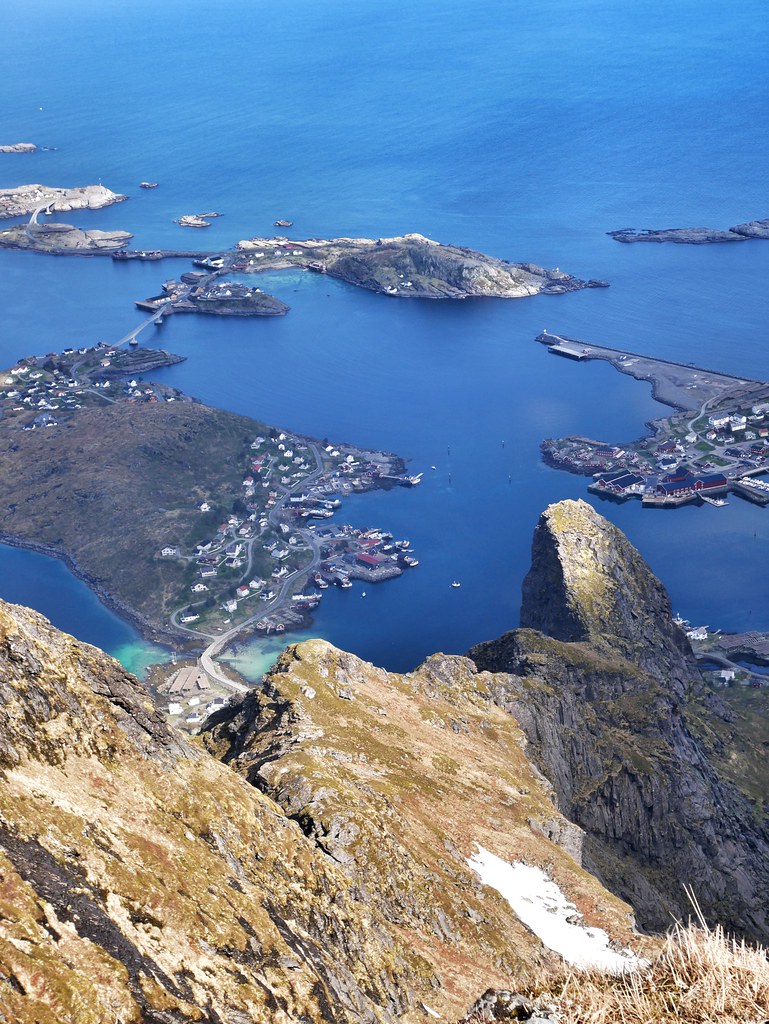 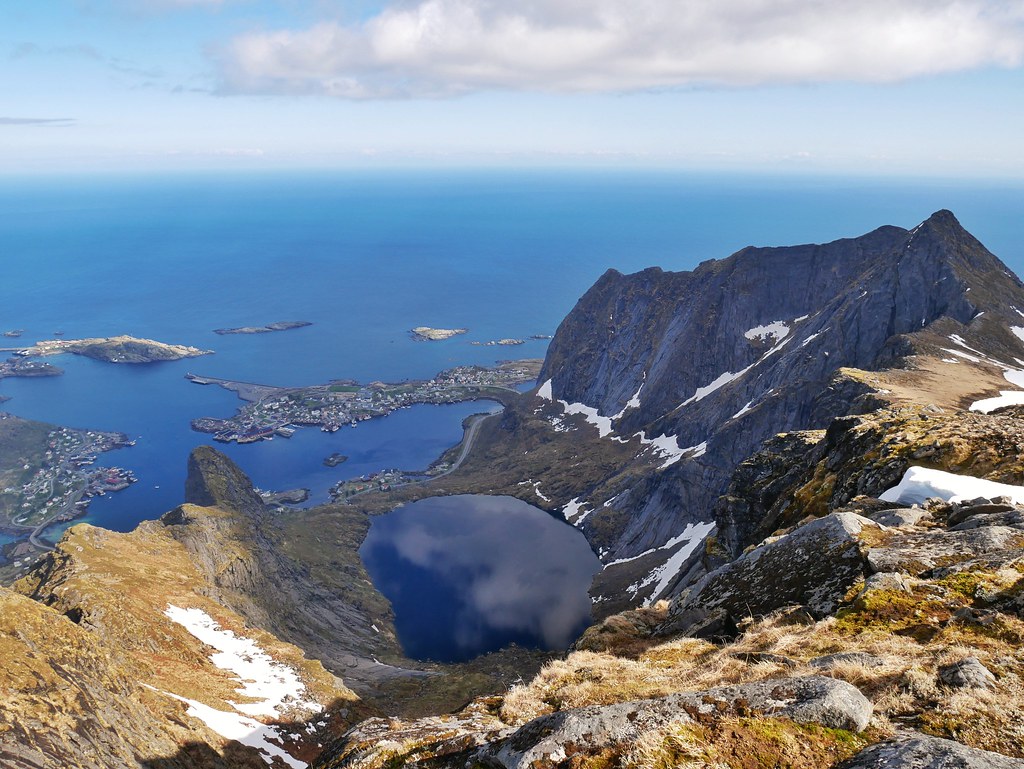 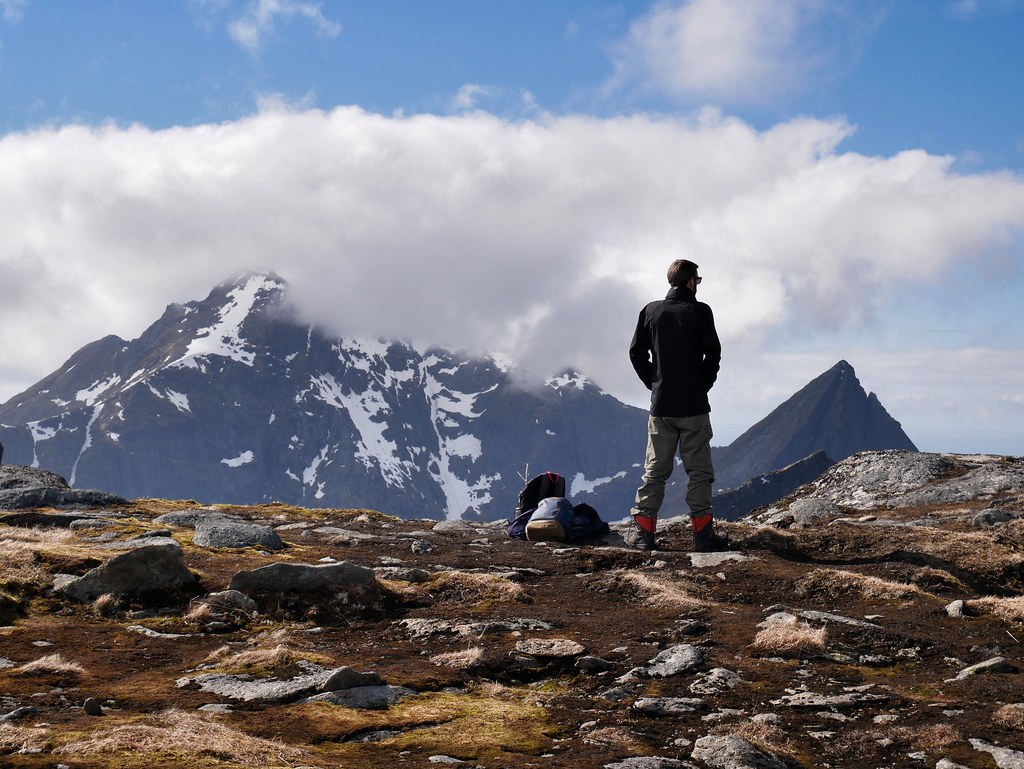 We followed the ridge line all the way to the top where we got one of the most jaw dropping views we’ve ever seen. We stood on the edge of a 700m drop, with some rocks at the ground to ensure a quick death should we fall. The blue fjord was below us, and then a phenomenal display of pointy peaks rose all around the water edges. To our left was the highest peak in the southern Lofoten’s, rising over 1000m up, it was scattered with snow and had a frozen lake at its feet. 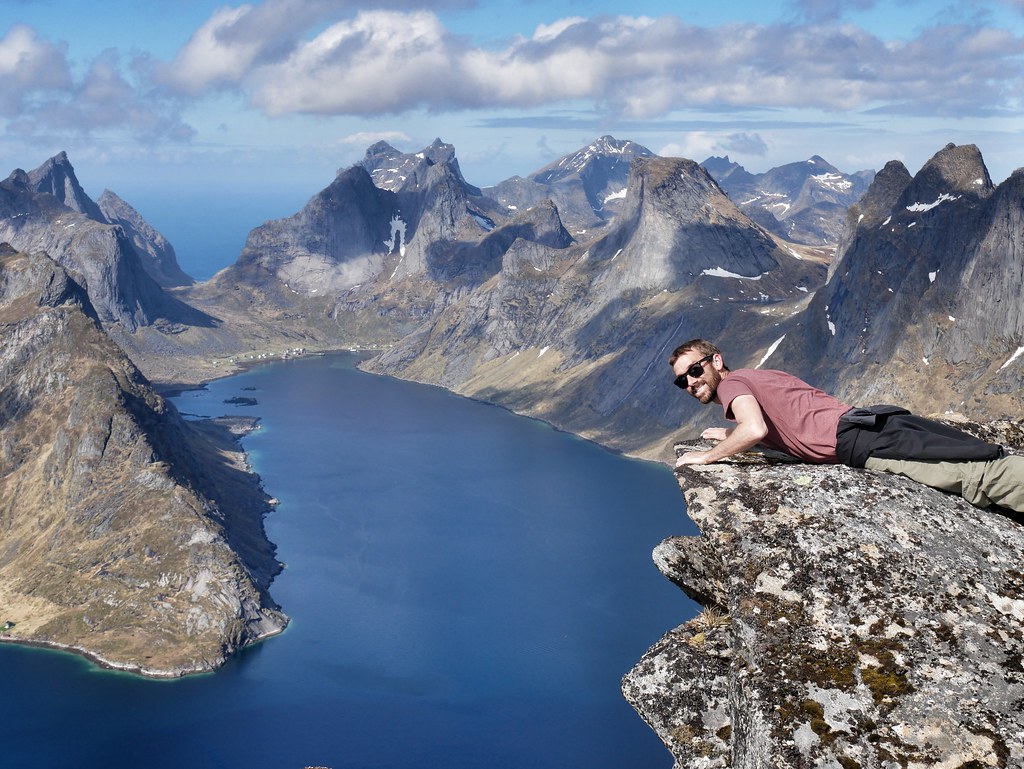 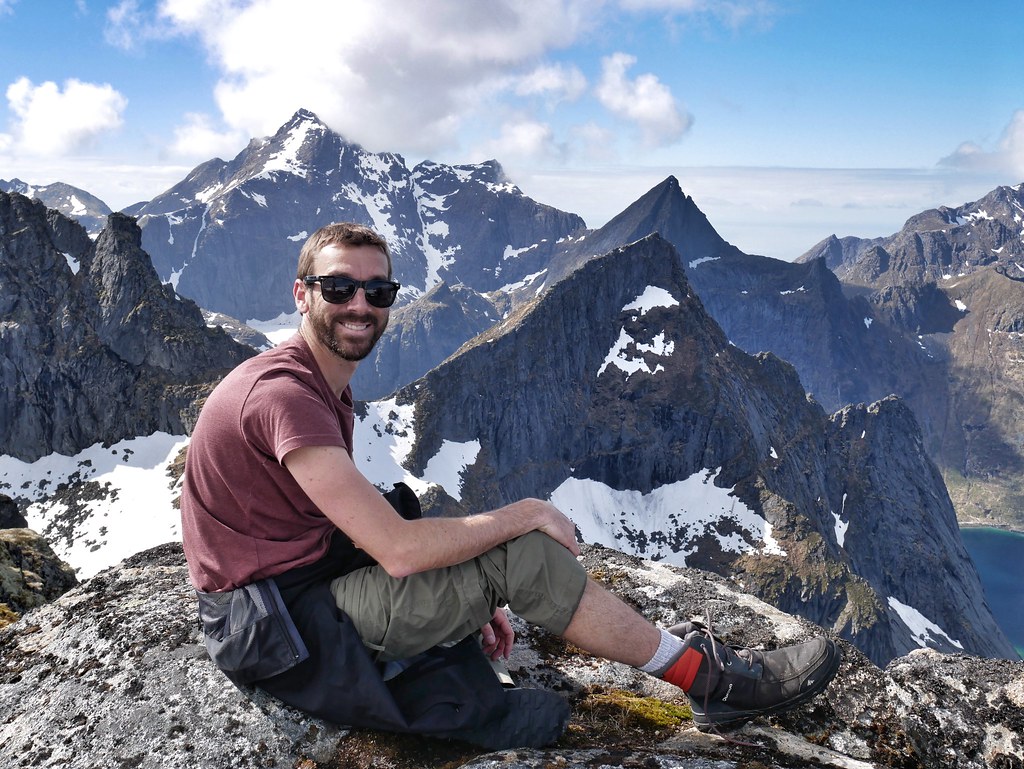 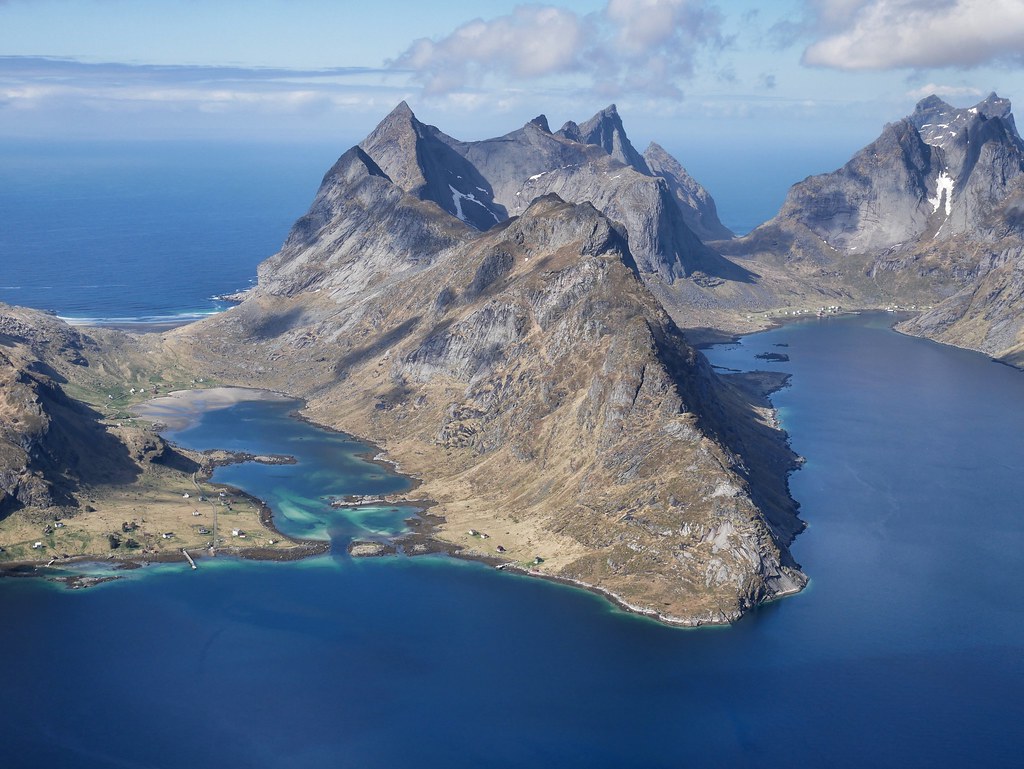 After travelling for almost 10 years we’ve become a little spoilt and sometimes we lose appreciation for what we’re seeing. But this view really wowed us and was the best in the Lofoten Islands as far as we’re concerned. Amazingly it was only us and one other couple doing the hike so it felt really remote and untouched. We ended up starting and finishing the hike in Reine, which added 6km onto the 11km hike. It was a tough day but we went at a nice pace and were surrounded by some of the best scenery in the world. 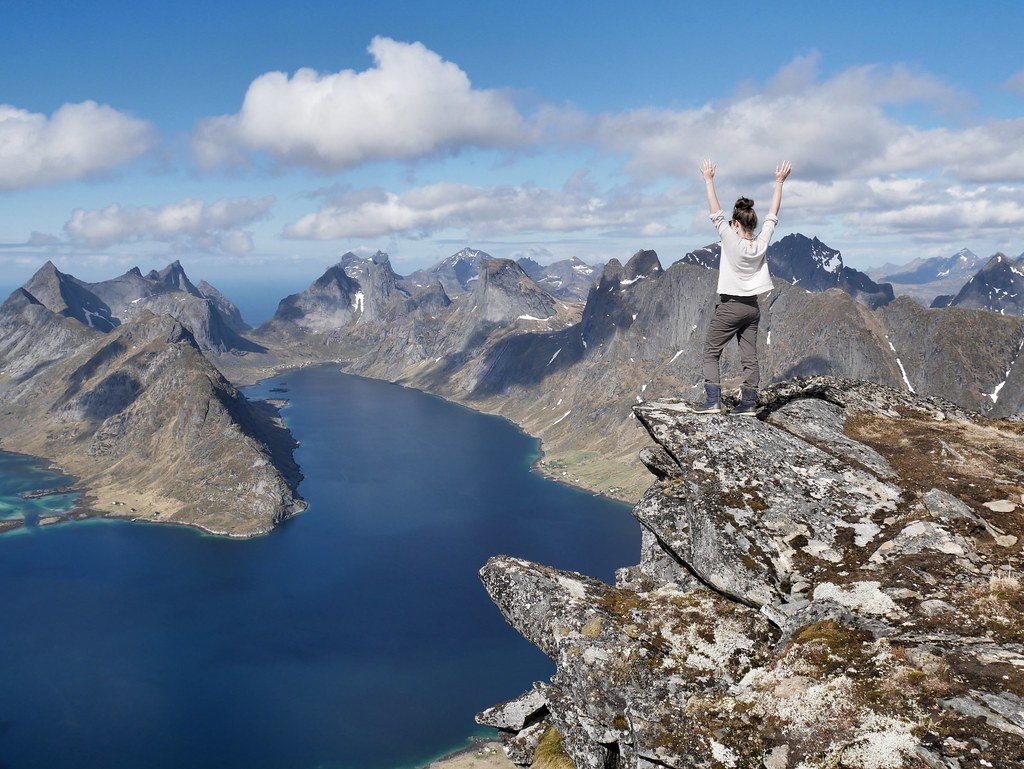 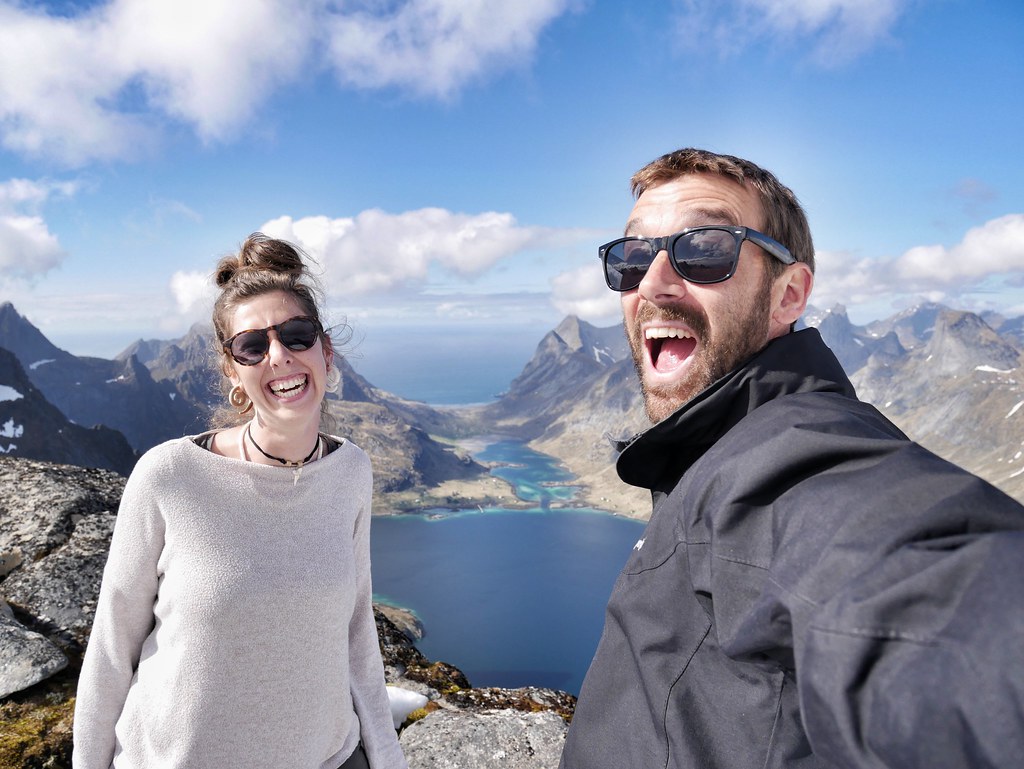 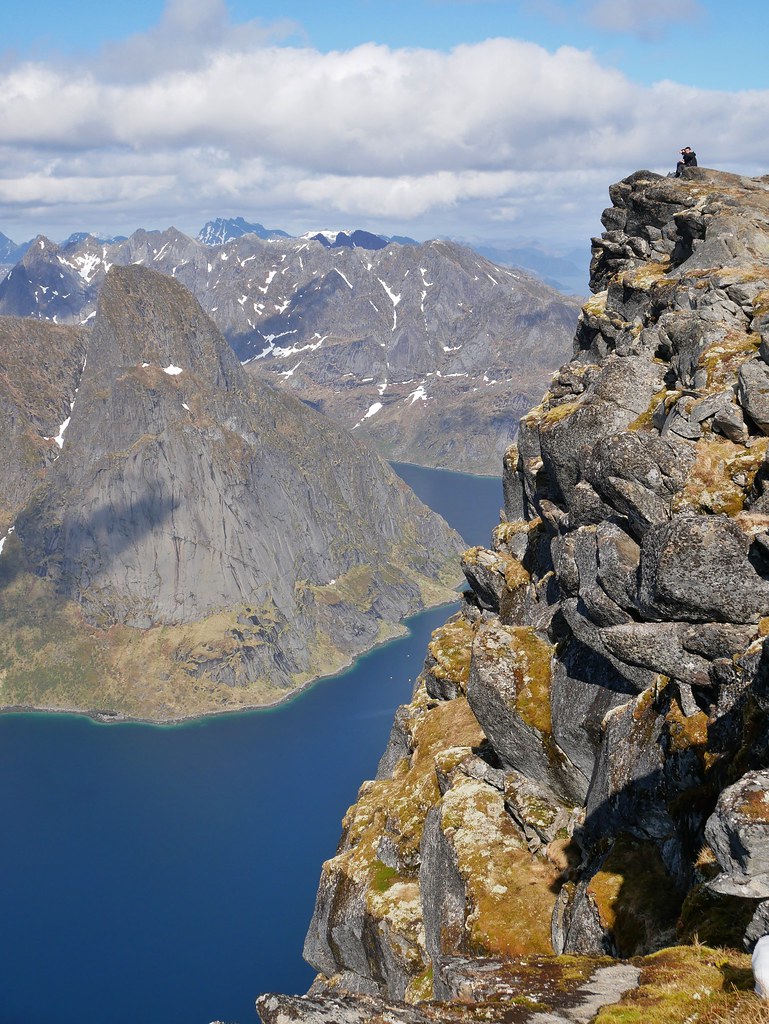 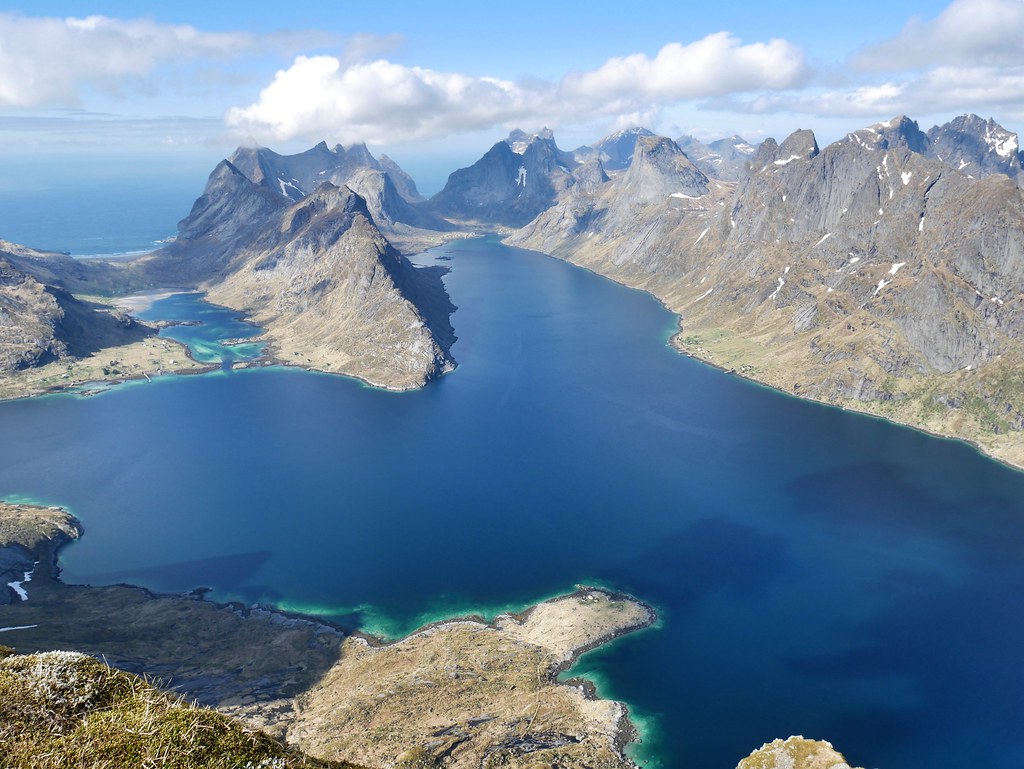