I once read that the Lofoten Islands are like the Alps but with their feet in the sea and I thought it was such a perfect description for this magical area. It’s one of the few places in the world where the mountains rise straight out of the water and shoot 500+ meters towards the sky. The archipelago stretches out in a narrow line across the Norwegian Sea and 80% of the islands are made up of mountains. The mountains are shaped like pyramids yet it only takes a couple of hours to reach a summit and peer down at the most jaw dropping views in the world. The beaches, with their white sand and turquoise water look like they belong on an island in the Caribbean, I mean really, this place is heaven and for the next two months we’ll be volunteering here. It’s our final volunteering position in Norway before we fly to Central Asia and start backpacking around Kazakhstan and we’re certainly ending Norway in the most beautiful location. 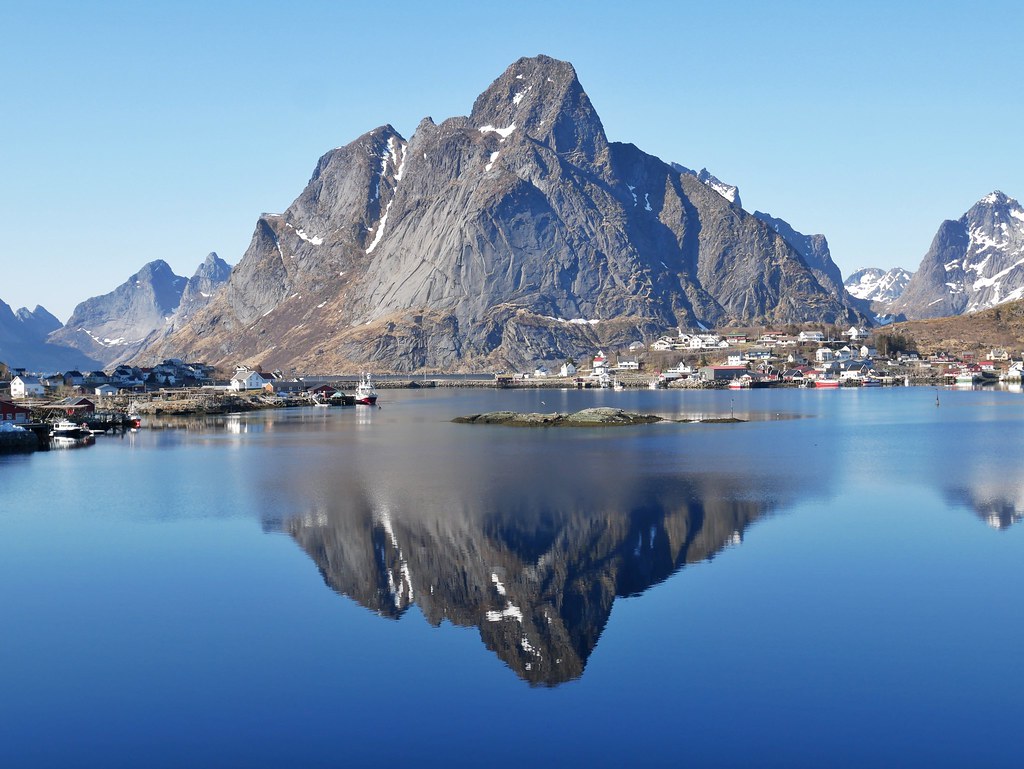 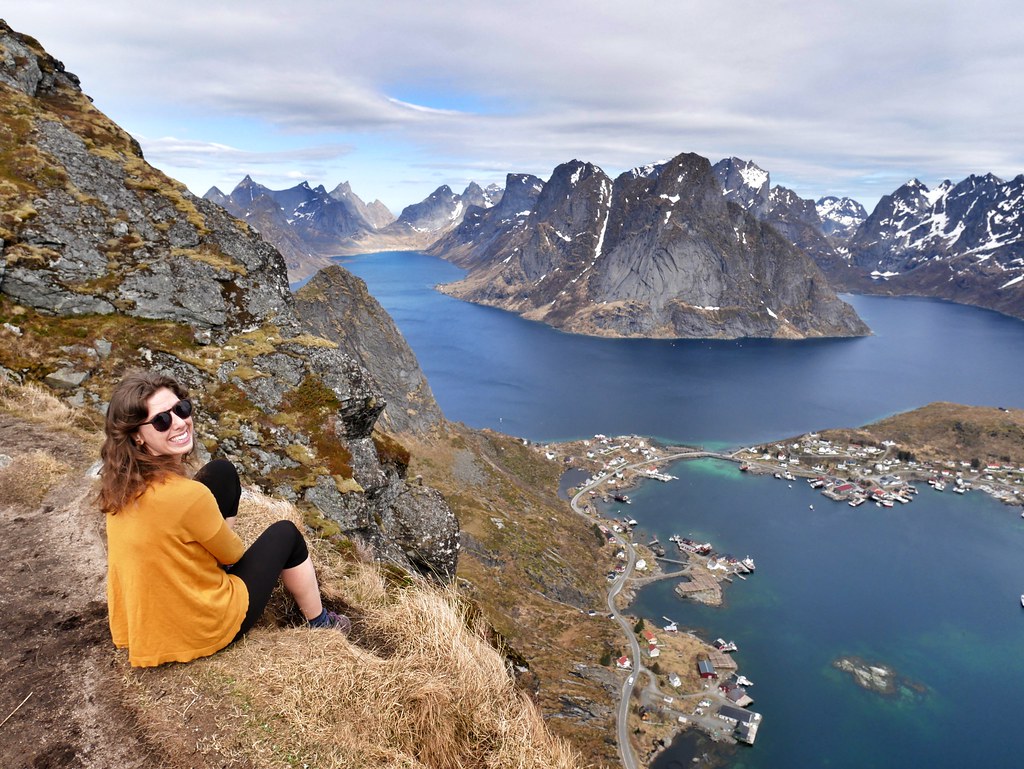 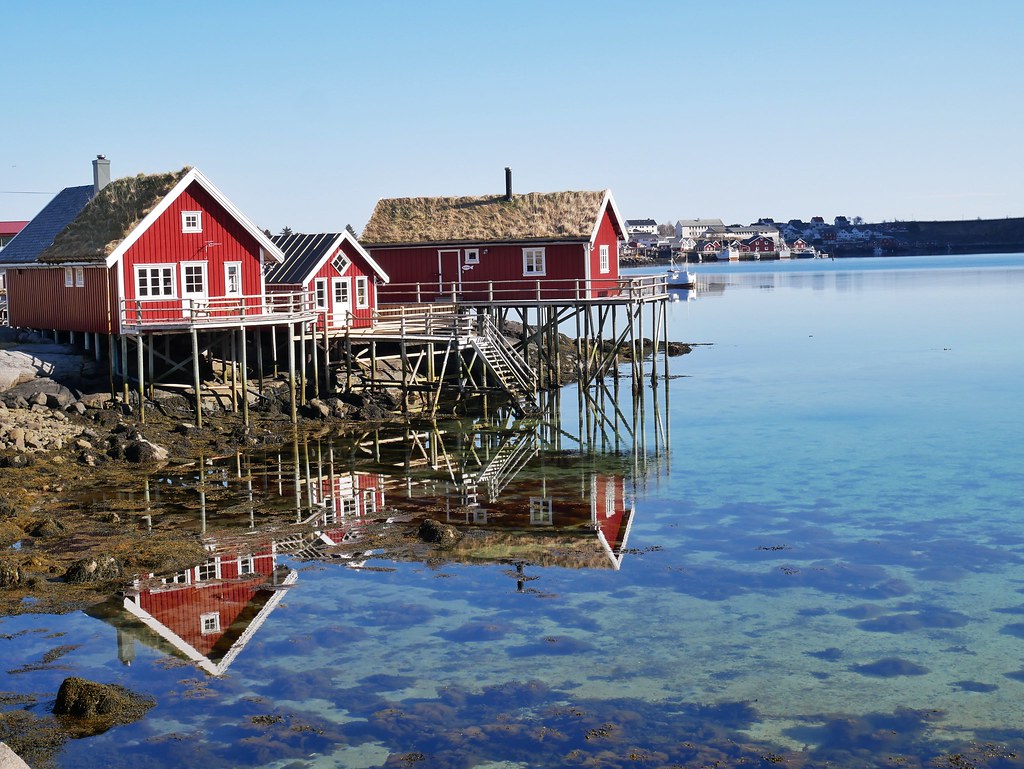 We ended our journey in the small village of Reine, set on a spit of land with mountains surrounding us on three sides and the open sea on the other. The pungent smell of thousands of stock fish hanging on the racks around the village hit our nostrils but we soon realised its a smell you just get used to. Even though we visited this area in our campervan a few years ago, I was still having to pinch myself as I looked out at the view. It’s so perfect that it looks like a green screen for a movie set, or like a image you only see on a desktop background. 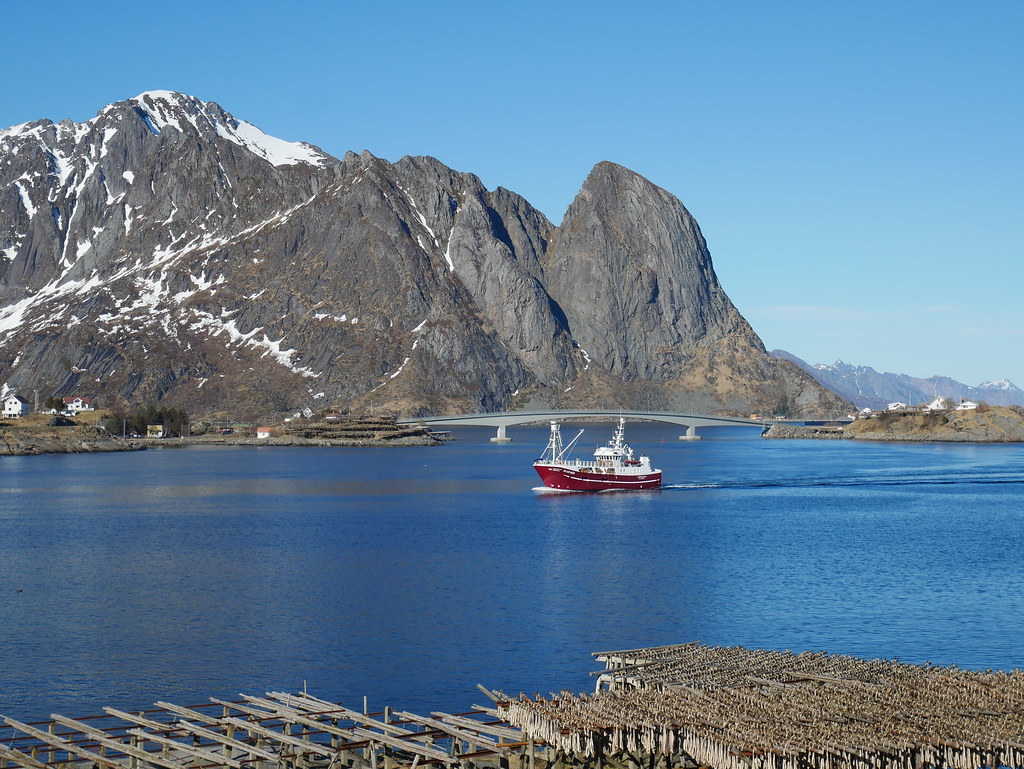 On the first few nights the sun set right in front of the house, in a valley between two spiky ridge-lines. The sunsets are always best when there’s clouds around though, and one evening I had to excuse myself from dinner on numerous occasions as the sky was turning into a kaleidoscope of colours. Big candy-floss style clouds drifted in front of us while the more intense reds and purples appeared in lines along the horizon. 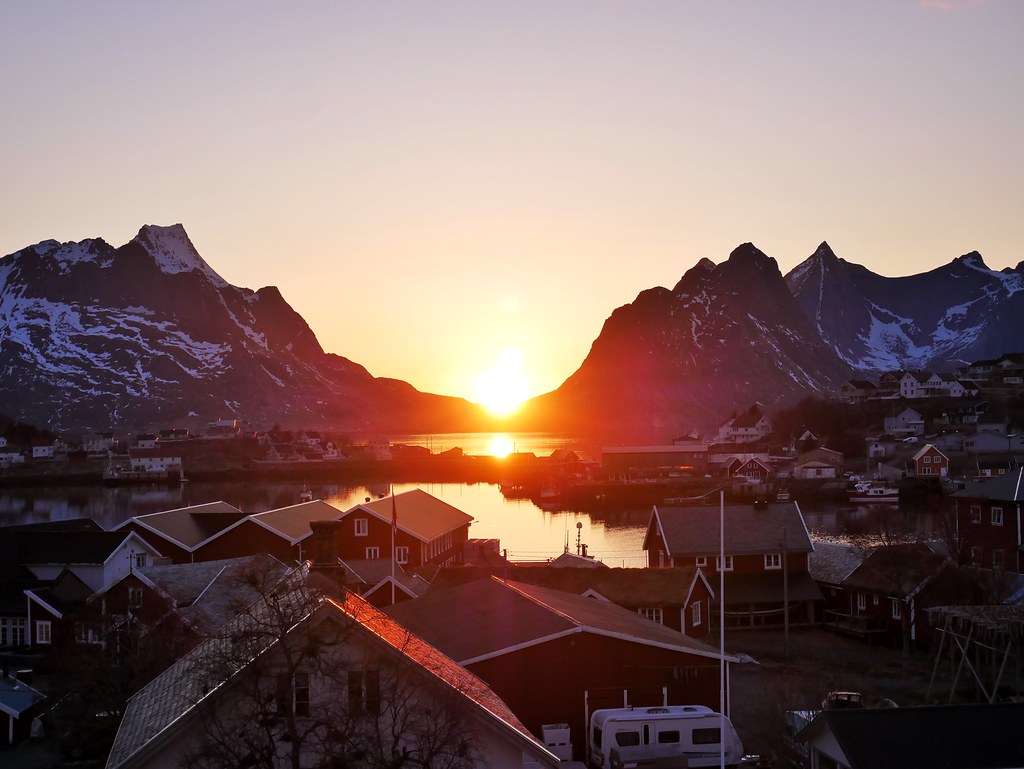 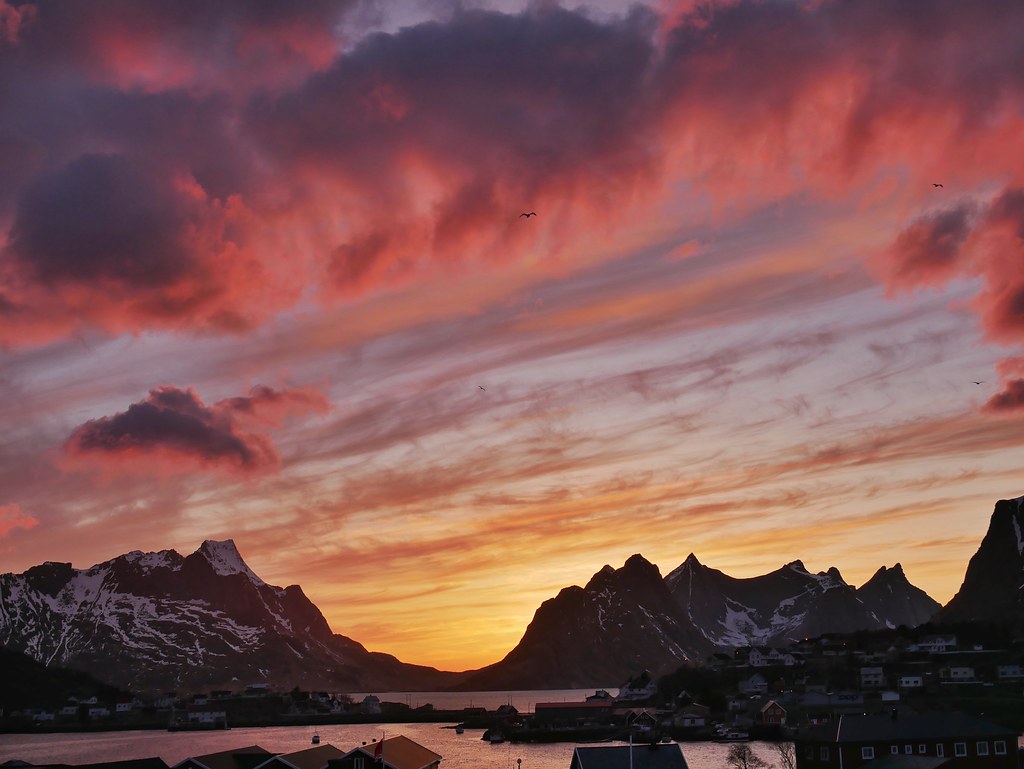 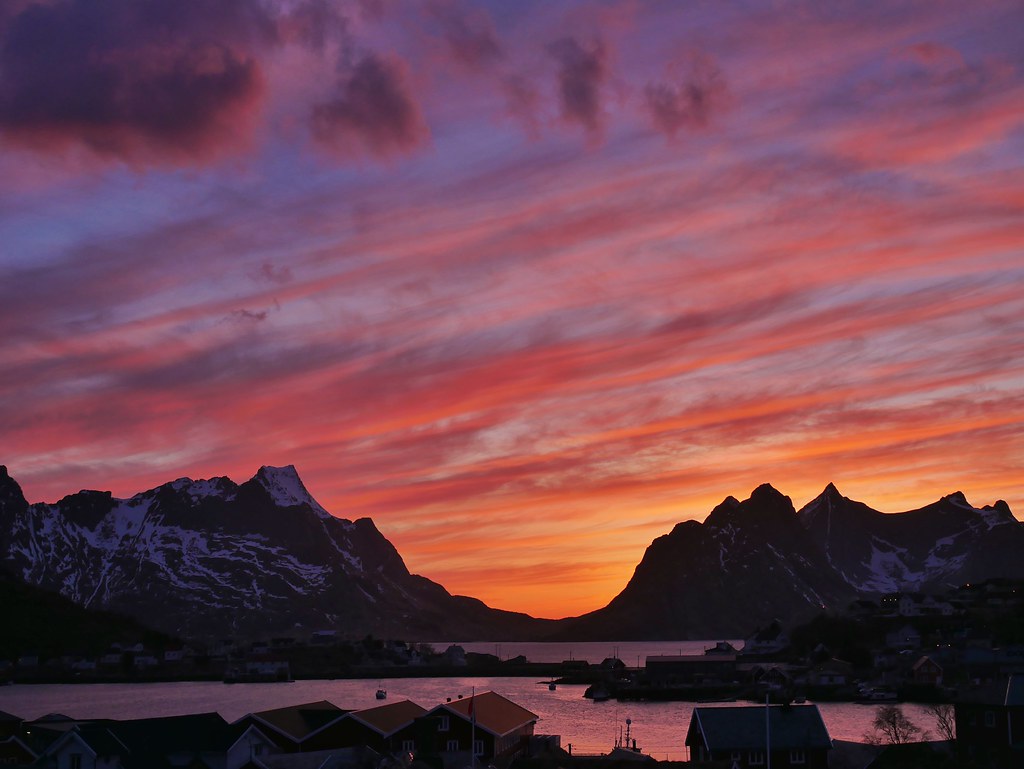 The weather can change really quickly here though, and sunshine can be masked with black clouds and gale force winds in a matter of minutes. The mountains create their own weather system so sometimes the eastern coast is enjoying blue skies while just 10 or so miles to the west it can be enshrouded in low lying fog. The clouds are quite magical here though, especially when they’re low lying and swooping around the side of the mountains. One particularly pointy peak is well known for looking like it stands alone on cloudy days as the higher mountains around it are hidden by fog and this one protrudes out of the mist. Even when it rains we seem to get treated with intense rainbows shining bright across the grey bay. 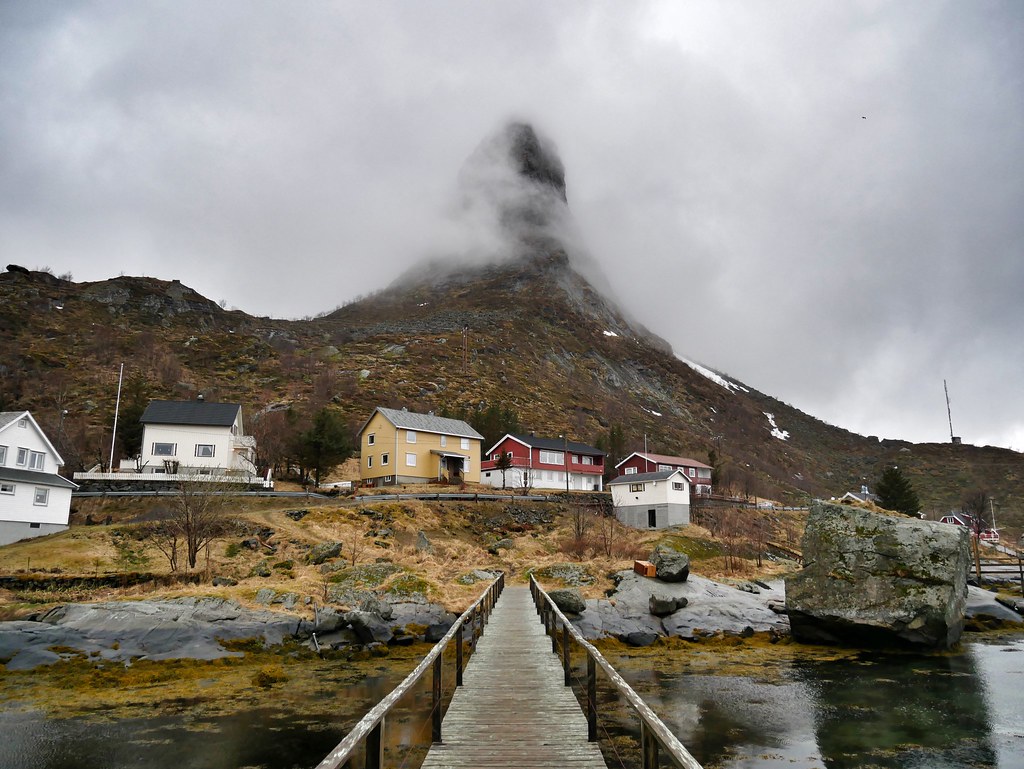 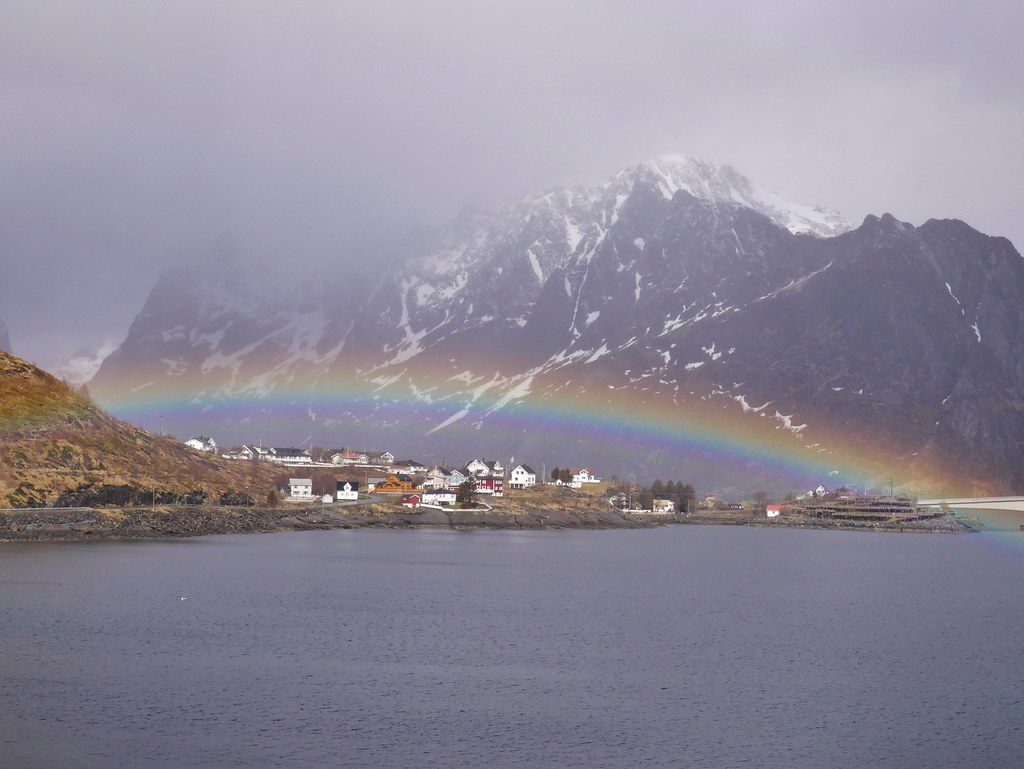 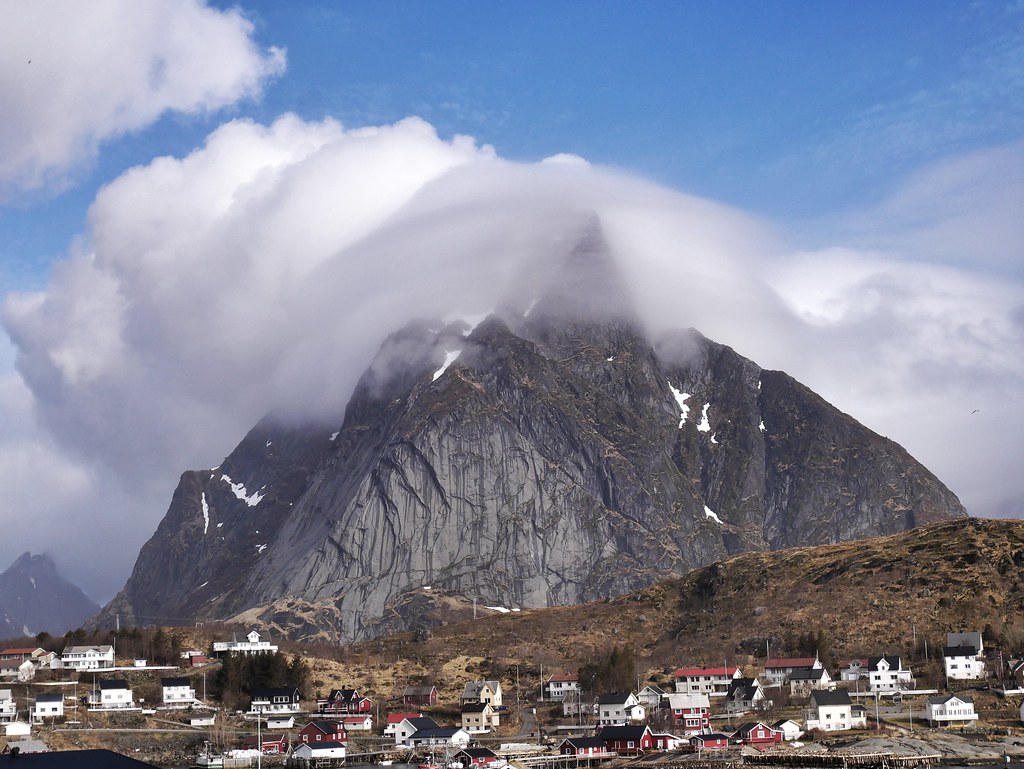 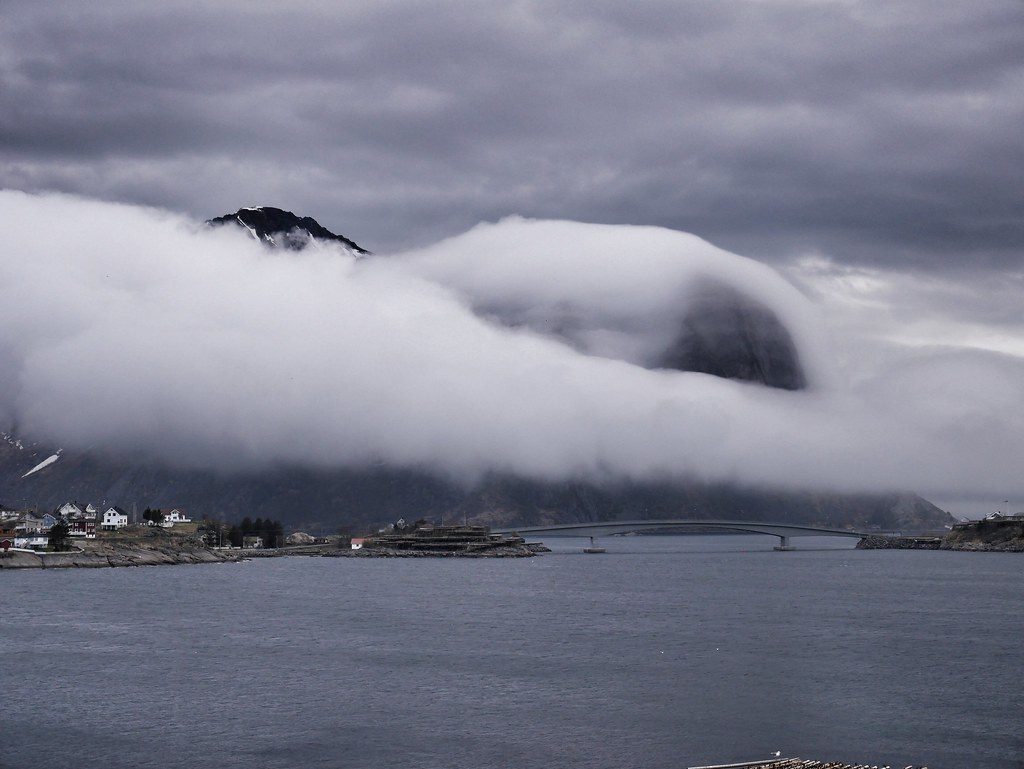 We managed to do a couple of short excursions during our first week, visiting a pretty beach in Ramberg and having a hail storm as we arrived and sunshine minutes later. Another day Craig and I walked along the road to Hamnøy, it was grey and gloomy but the rain stayed away. The route led us over 6 islands, my favourite of which was Sakrisøy as it had ochre coloured rorbues instead of the traditional red ones. We walked up a small hill nearby and the sea around Sakrisøy was a fabulous turquoise colour in the shallows. 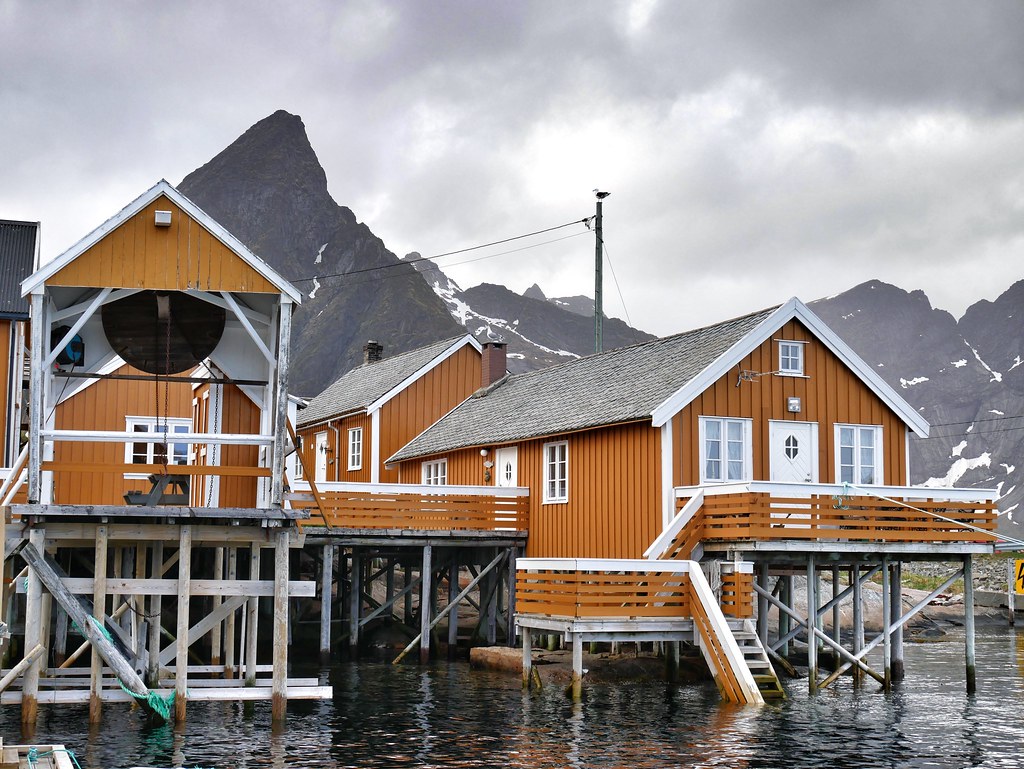 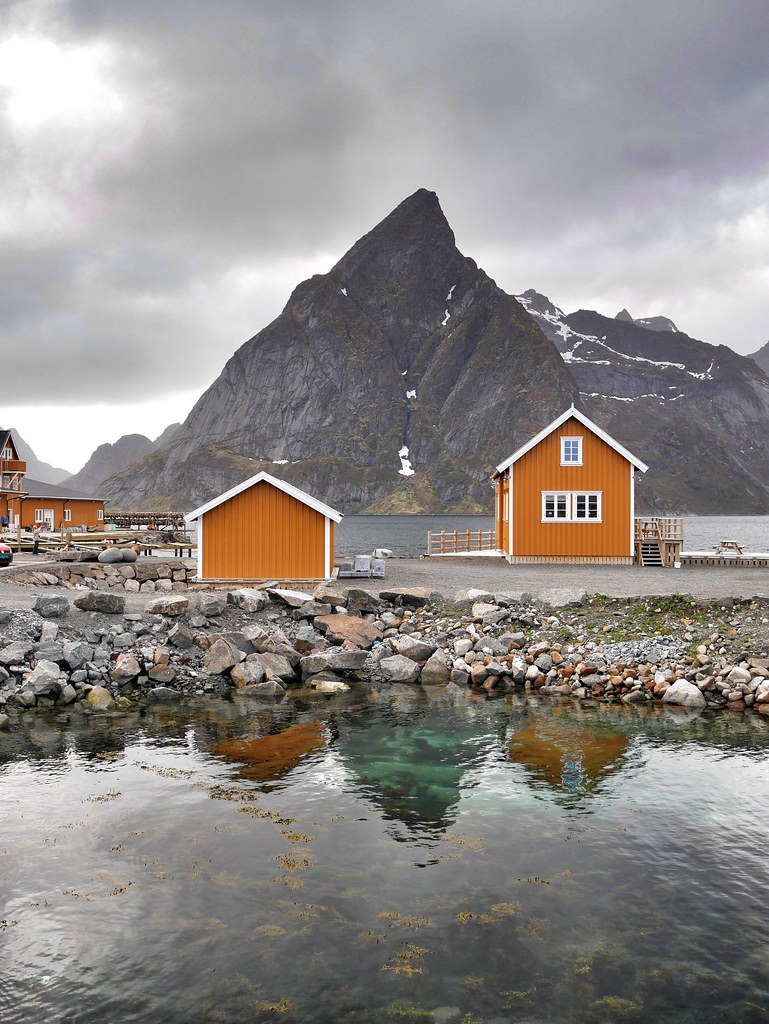 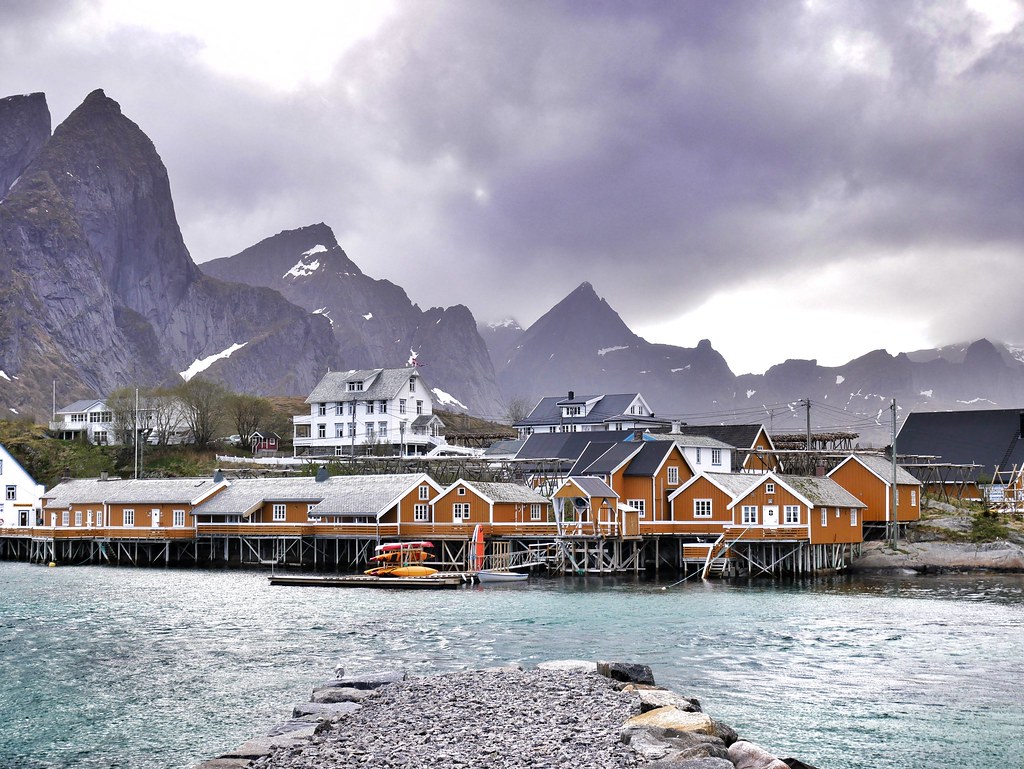 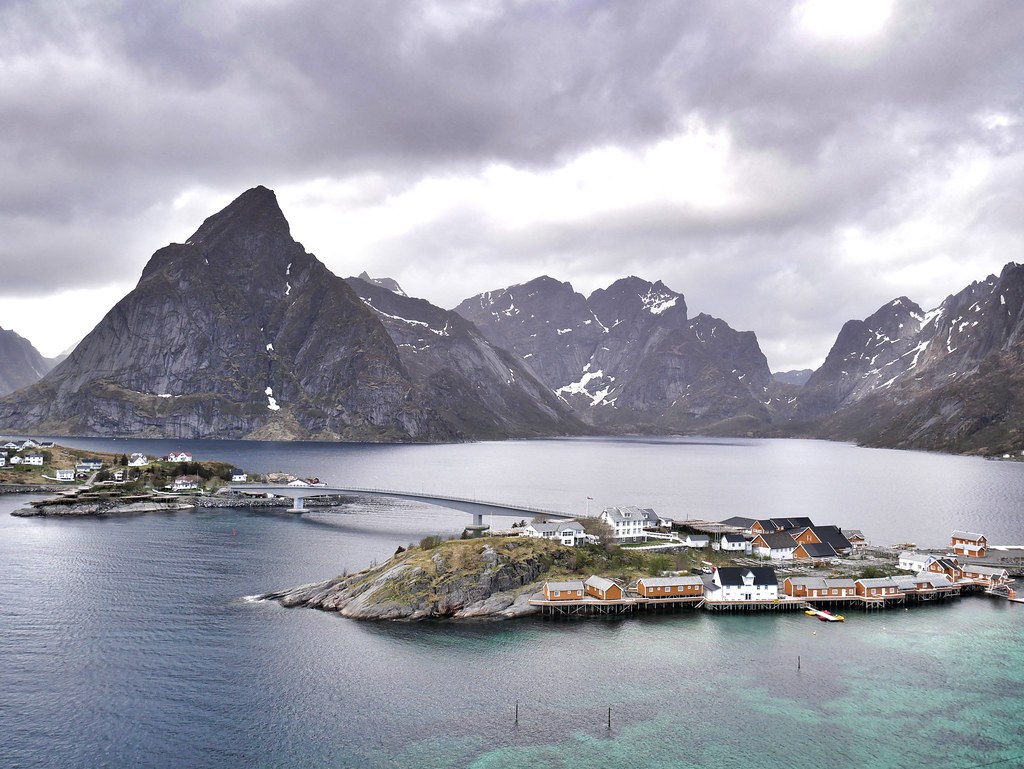 Now that our first week of cleaning and painting the house is up, the mountains are calling louder than ever before. There’s something about being surrounded by beautiful mountains but not actually being on them which really niggles at me, which is odd considering the view from the house is so good. But it’s time for us to get our hiking shoes on and explore the Lofotens on foot. 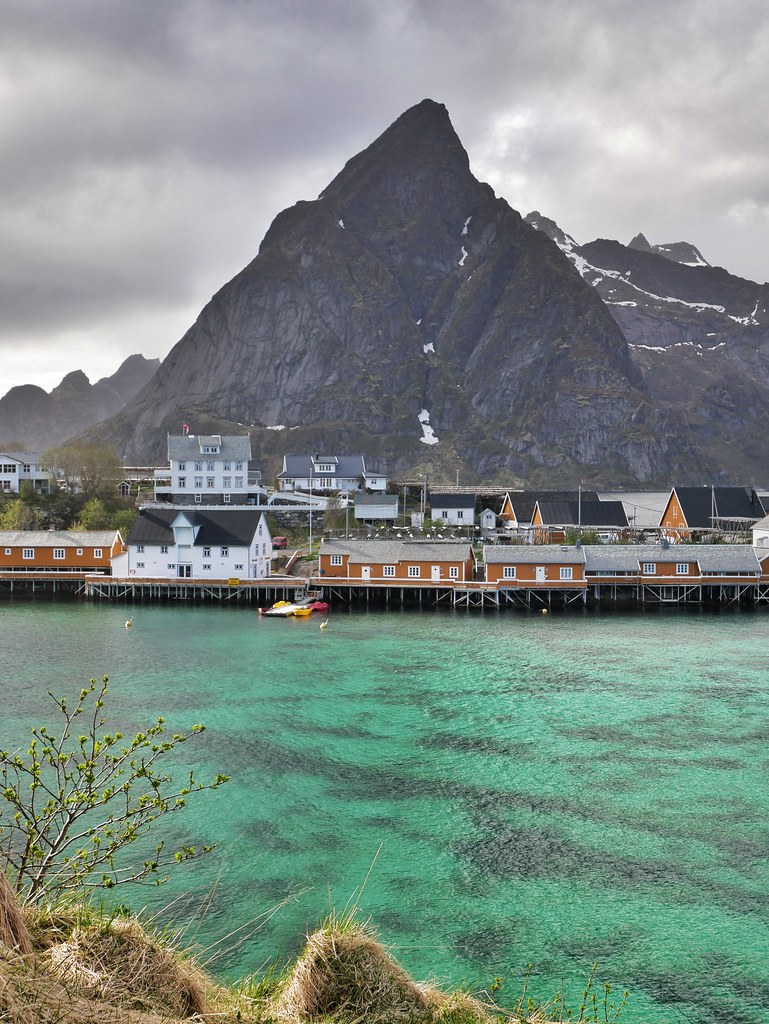 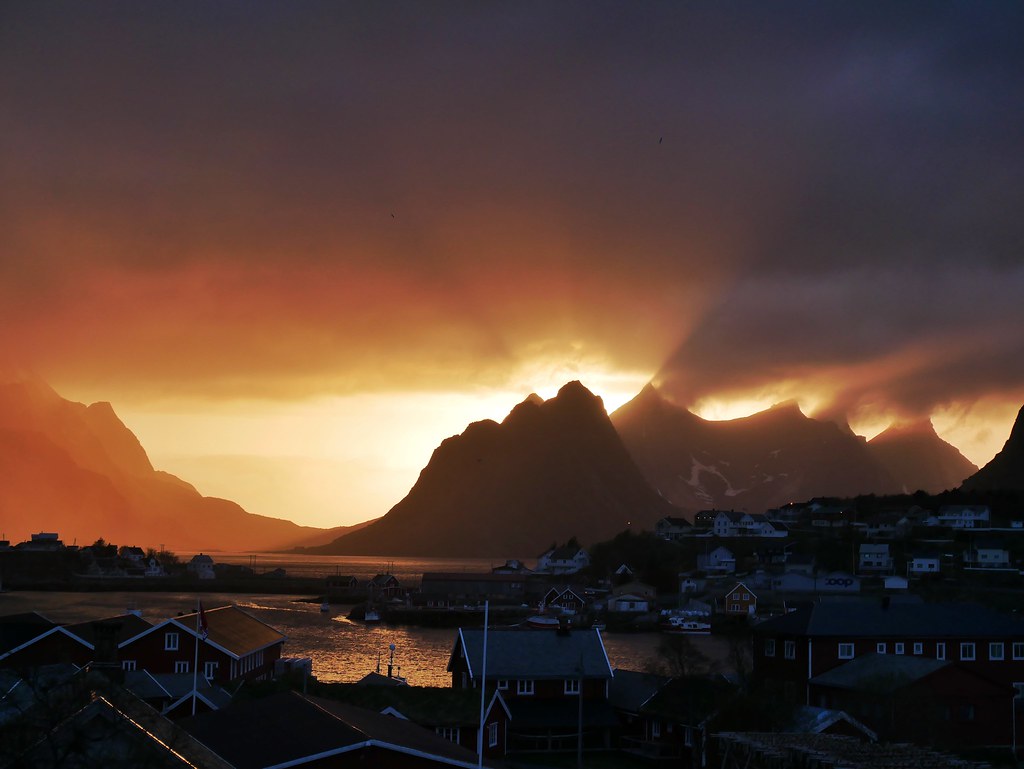 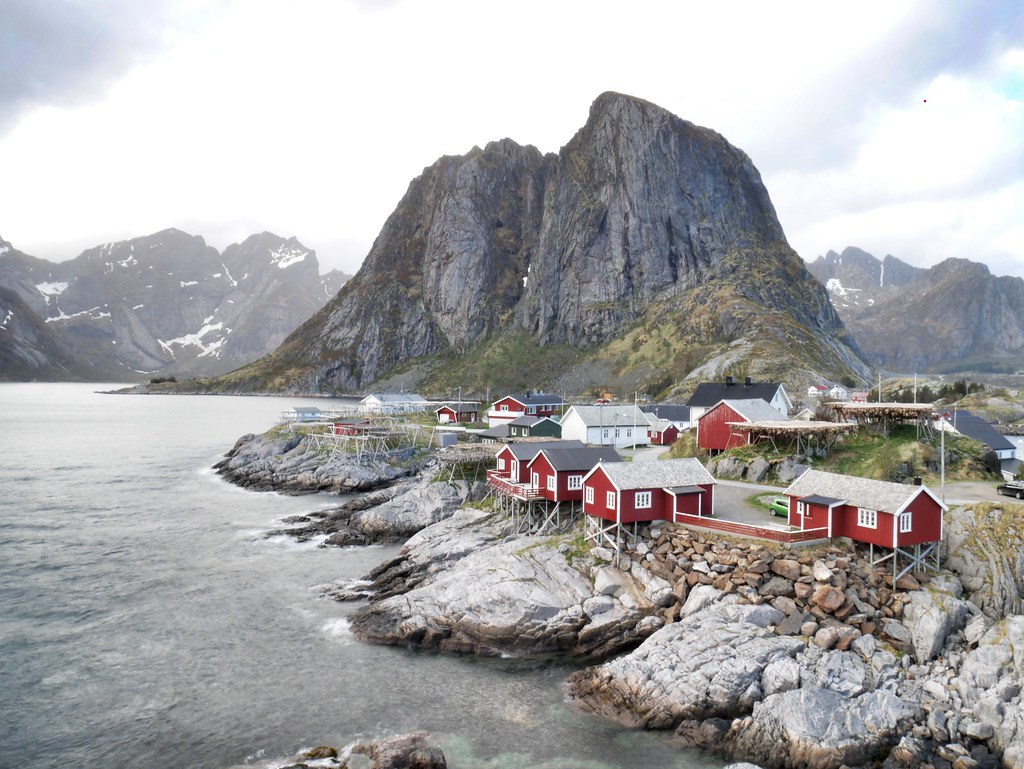