It was -3 degrees outside when we tried our first winter paddle boarding in Norway. I was really worried about falling in the water and dying of hypothermia, but we gave it a whirl anyway. We wore long johns under our wetsuits and boiled up almost instantly, so it was actually a relief to go outside and get some fresh air. We were also given wetsuit style gloves and booties. 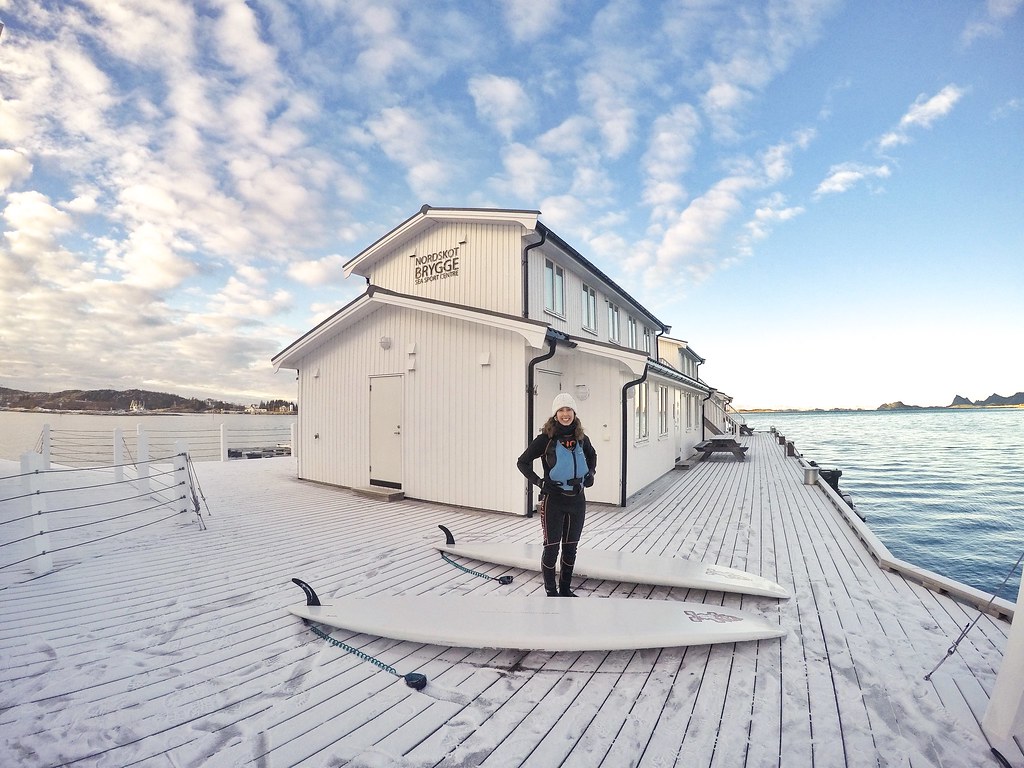 The weather was good with no wind and blue skies, but clouds on the horizon blocked the sun. Luckily, as soon as we set off on our trip the sun popped out from above the clouds. We slowly drifted past the glass cabins of Manshaussen island and I was shouting across to Craig saying “THE WEATHER’S PERFECT! THE SUN’S COME OUT!”. Maybe I tempted fate, but as we turned back on ourselves to paddle between the next two islands we were hit with a seriously strong wind. I persevered and didn’t let it bother me, although stopping for photos was a problem as I kept drifting back. Craig was always ahead of me so I was paddling pretty hard to catch up. 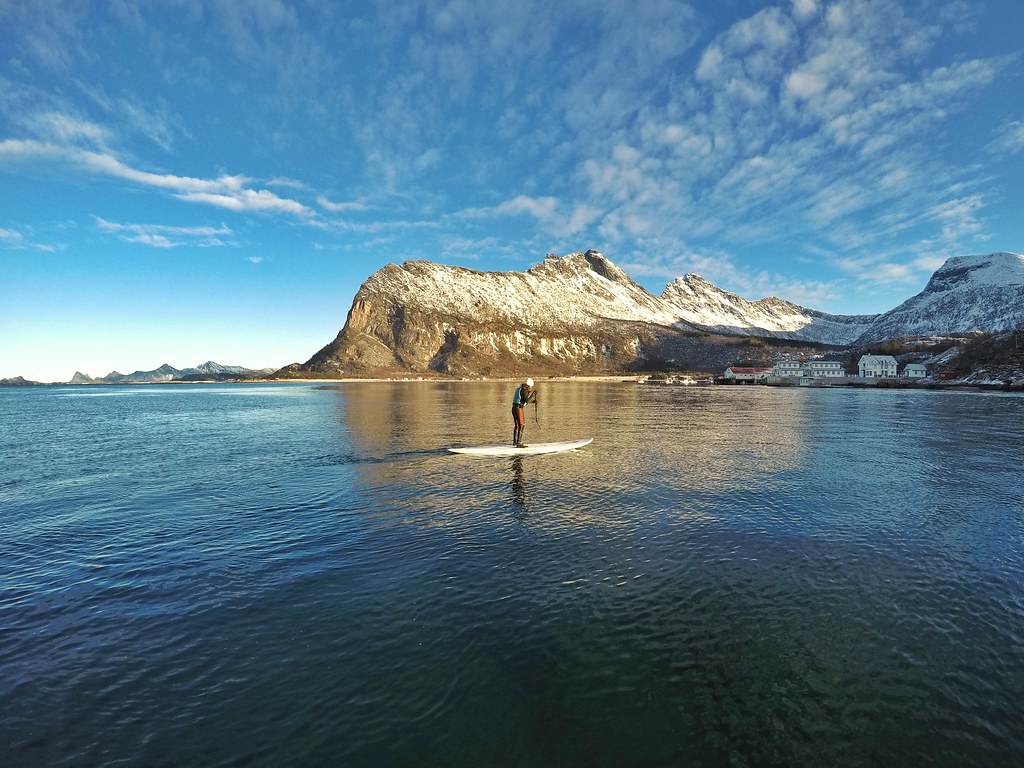 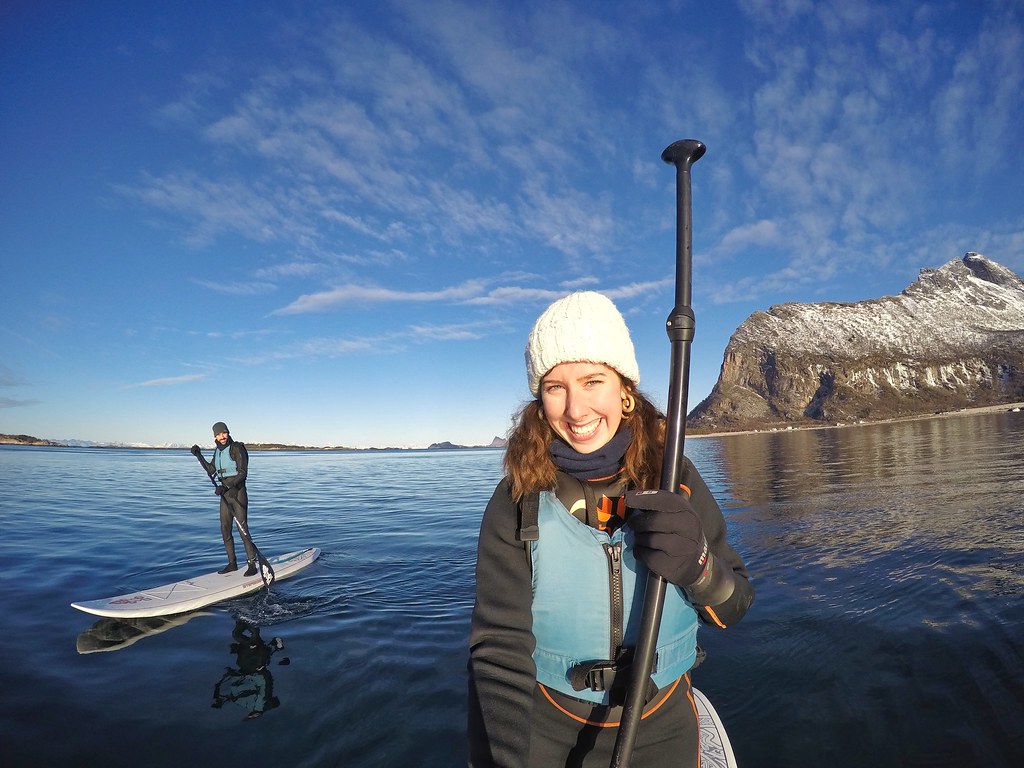 I was so confused because this area was the absolute calmest on our boat trip the other day, yet it was so different today. I couldn’t take anymore photos by this point as I wasn’t getting anywhere so I gave it my best and finally met Craig under the bridge. He was sat down on a pontoon and asked if I wanted a break but I decided it was best to plow on. Sitting down would only make me cold and the wind could get even stronger. 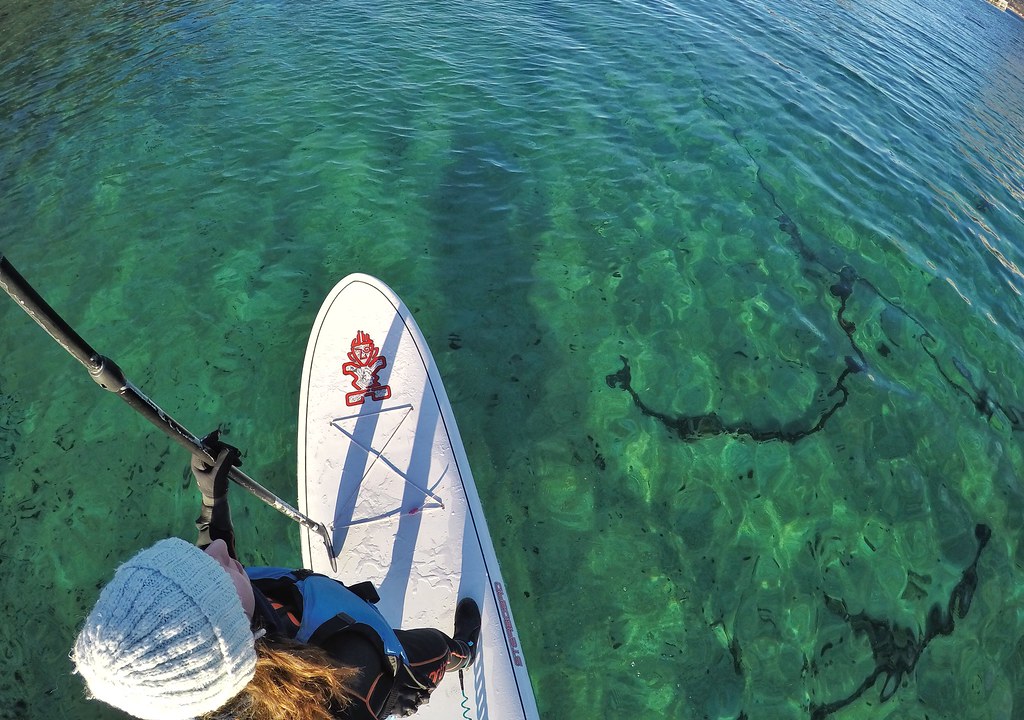 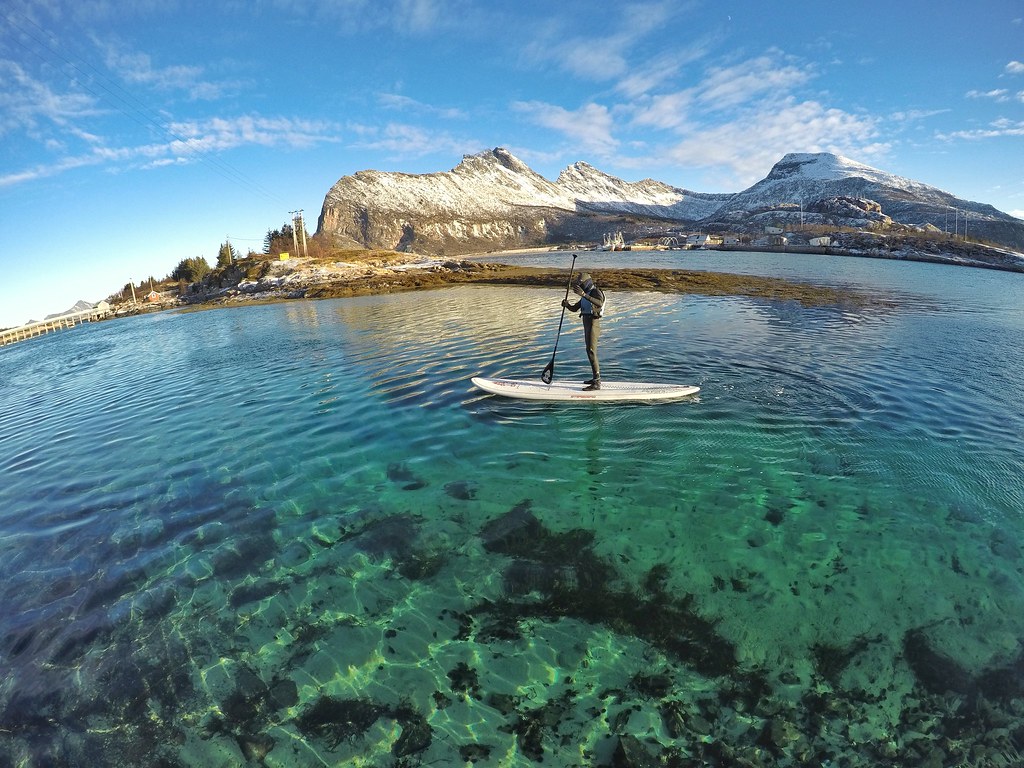 The battle continued and we were now paddling head on into the wind. If I missed one swipe with my paddle, I’d drift back a few meters and waste all my hard work. It was totally demoralising and I was starting to panic and lose hope of ever returning back to Nordskot. Craig and I began arguing about the situation, I said we’d never make it back in these conditions and we were going to die out here. I expected him to come back with an encouraging speech, like “we’ll be fine Lauren, I’ll paddle alongside you and we’ll get back no problem”. But instead he said “yeah we are going to die if you don’t get a move on!!”. He was telling me to stick close to the shore which just meant I got caught in the seaweed and couldn’t paddle at all. By the time i got myself away from the seaweed, I’d drifted back to where I’d been 20 minutes before. Craig said we should go back to Manshaussen and return home that way, but I wasn’t sure. What if it was just as windy there and we had to do all the hard work again? So we decided to continue paddling, I was literally giving it all I had with every push, determined to get around the corner of this damn island. The waves were getting pretty bad by this point and we could actually see white caps, we’ve only seen white caps here when we had the gale force winds. I had a couple of wobbles on my board, falling forward and having to grip the board with my hand which made them wet and cold. My legs were in a slightly bent position for so long that they were beginning to turn to jelly and I felt like it was imminent that I would fall in the sea. It was at this point that I told Craig my emergency whistle was inside my camera pole…just in case I toppled into the freezing sea. Not that there was anyone around to hear it! We did finally make it around the corner of the island and saw our jetty in the distance. There was hope. It was already easier to paddle as the wind was hitting us side on now, and suddenly the wind completely stopped. The sun was warm on our skin and I felt the life coming back into my frozen hands and feet. I called out to Craig “I THINK WE’RE GONNA MAKE IT!” He didn’t hear me, but I replied “nevermind” instead of repeating it and seriously tempting fate. We did successfully make it back in one piece though. My body was exhausted, but the Arctic didn’t claim any lives today. 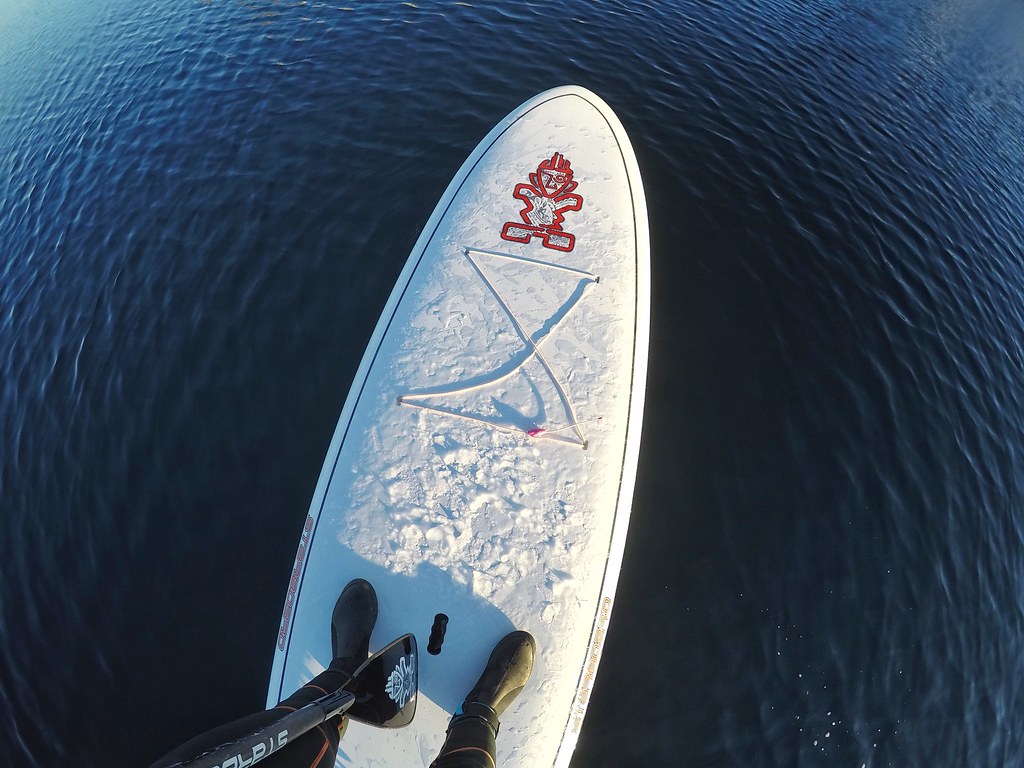 I did say I never wanted to paddle board in winter ever again…but then a calm afternoon came along and we decided to give it another go. We took a different route and headed left from our jetty. The sea was flat like a sheet of glass and the conditions couldn’t of been more perfect! There was a drop off close to the shore and the shallow section was clear like gin and faded into a dark blue. It was paradise and the sun felt so good on our skin, even though it was a crazy -6 degrees, it actually felt warm. 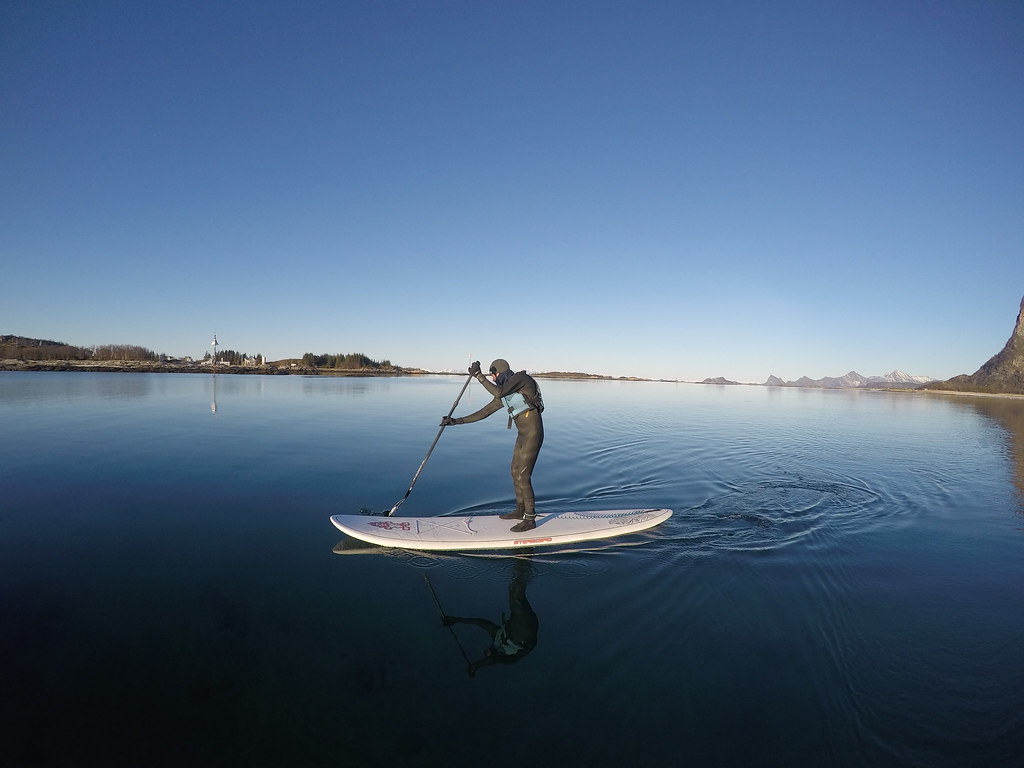 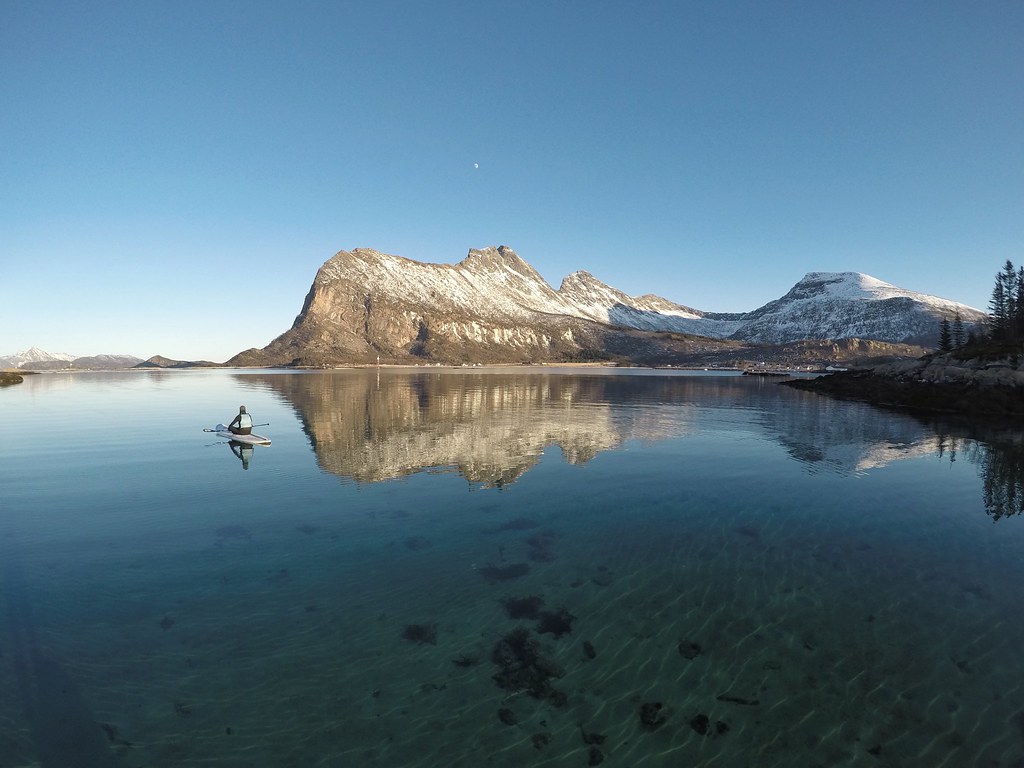 Instead of feeling like we were paddling to save our lives, we gently paddled across to Manshaussen Island and decided to risk it and go between the two islands where we nearly died before. Boy was it a different scene today! We gently swiped our paddle through the calm sea and slowly drifted over the glistening water. You almost don’t need snorkel gear in Norway as the sea is so clear; we looked down and saw seaweed, coral, starfish, rocks and lots of little fish. It was such a perfect day, with mirrored mountains and tranquil conditions, we probably paddled 3x the distance that we did a few days ago, but in half the time and it was probably one of our favourite days in the Arctic. 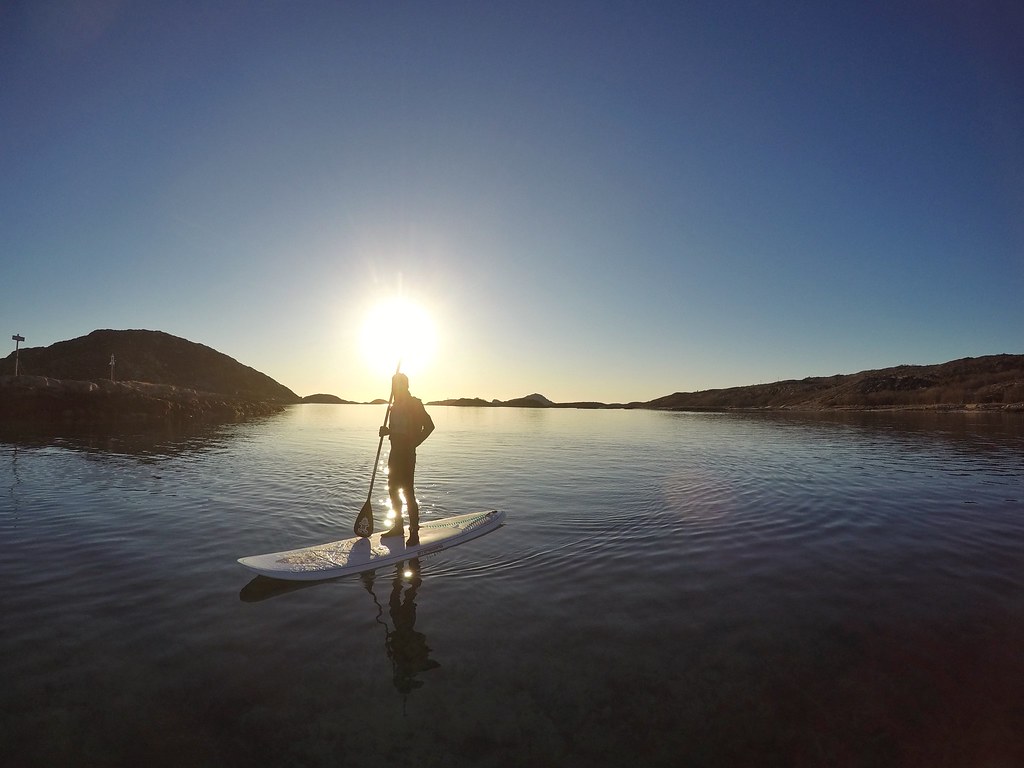 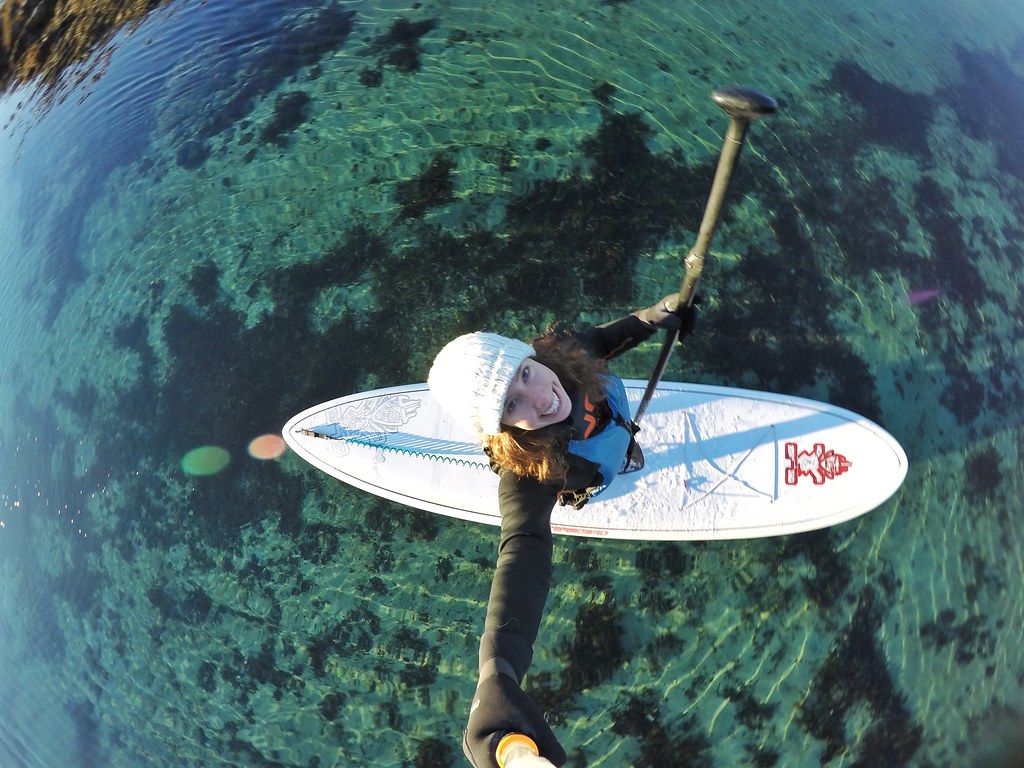 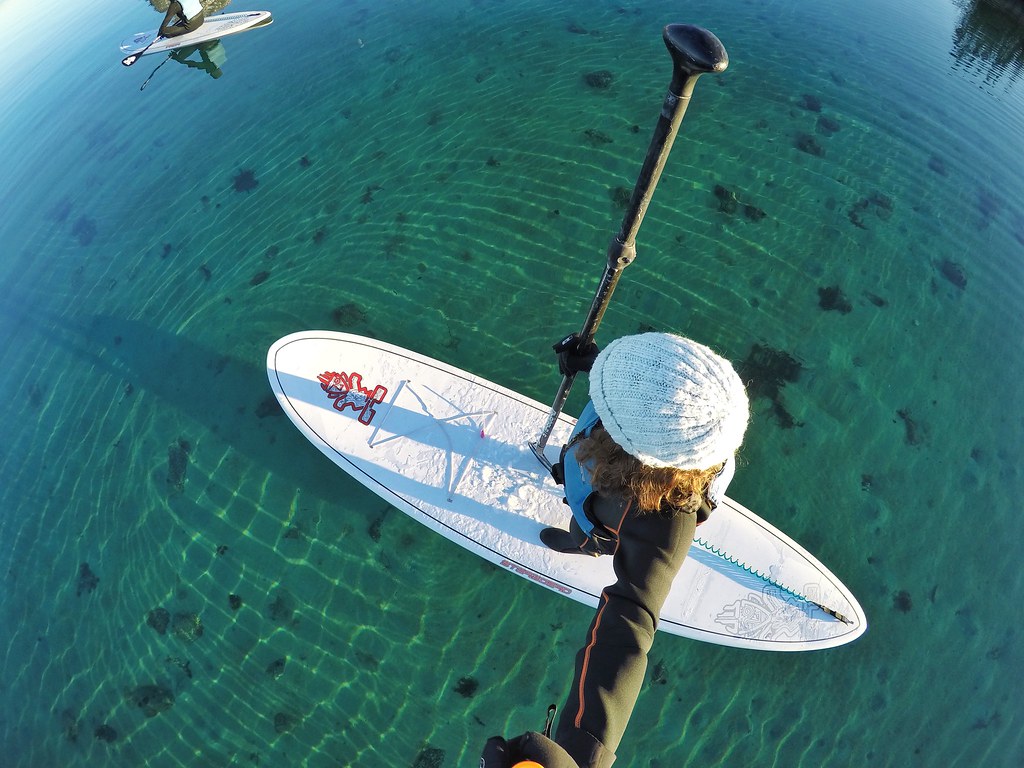