After a night of aurora filled skies, we woke rather sleepy-eyed to a crisp morning with tiger-striped clouds behind the mountains. We had planned on doing some work at basecamp, but our host suggested a boat ride so we obviously jumped at the opportunity. We were given float suits to wear which would keep us warm and afloat should we fall in the water, or if the boat sinks. Interestingly they don’t keep you dry, so if the boat were to capsize then your a deadman in these ice cold waters, a floating deadman that resembles Michelin man to be more precise. 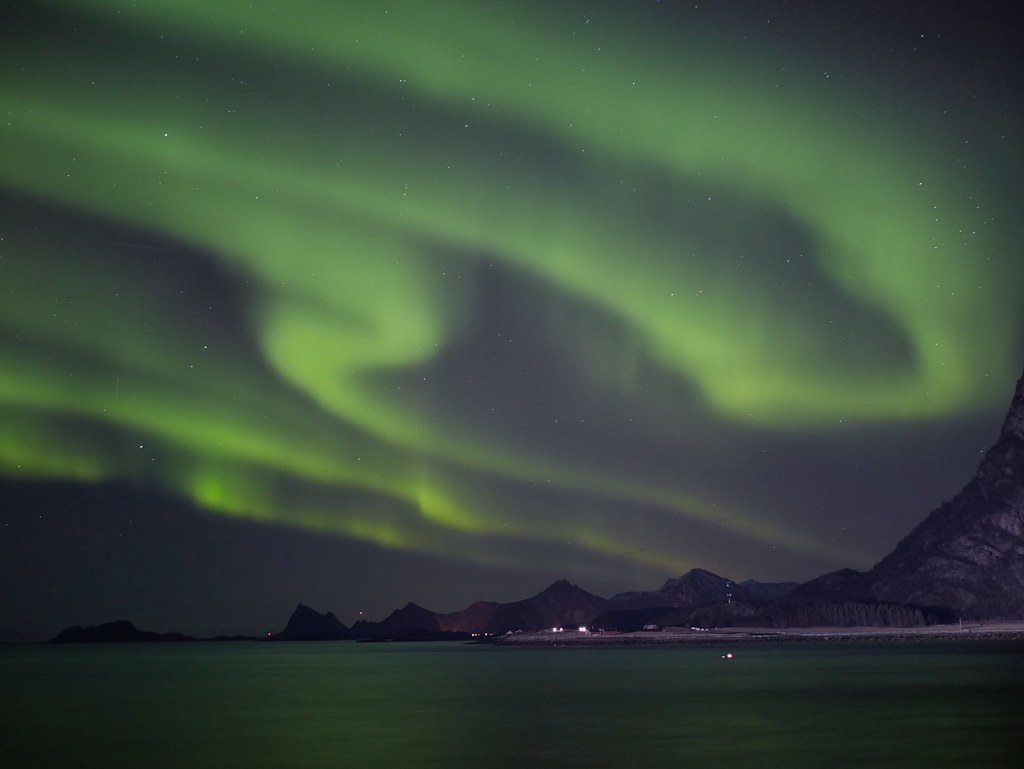 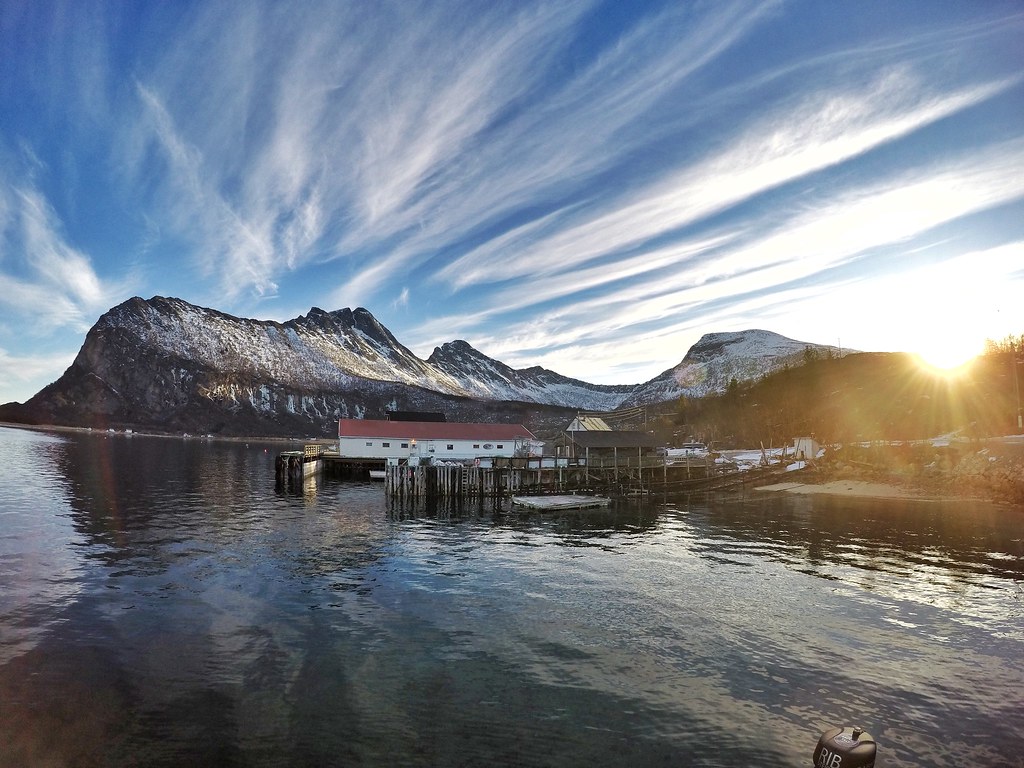 The weather was just perfect, probably the best conditions we’ve had in our 6 weeks here, with no wind and 2 degrees above zero. Our first stop on the boat trip was to the neighbouring Manshaussen Island. It’s owned by one of the worlds leading polar explorers, Børge Ousland who’s done solo trips to the North and South Pole. 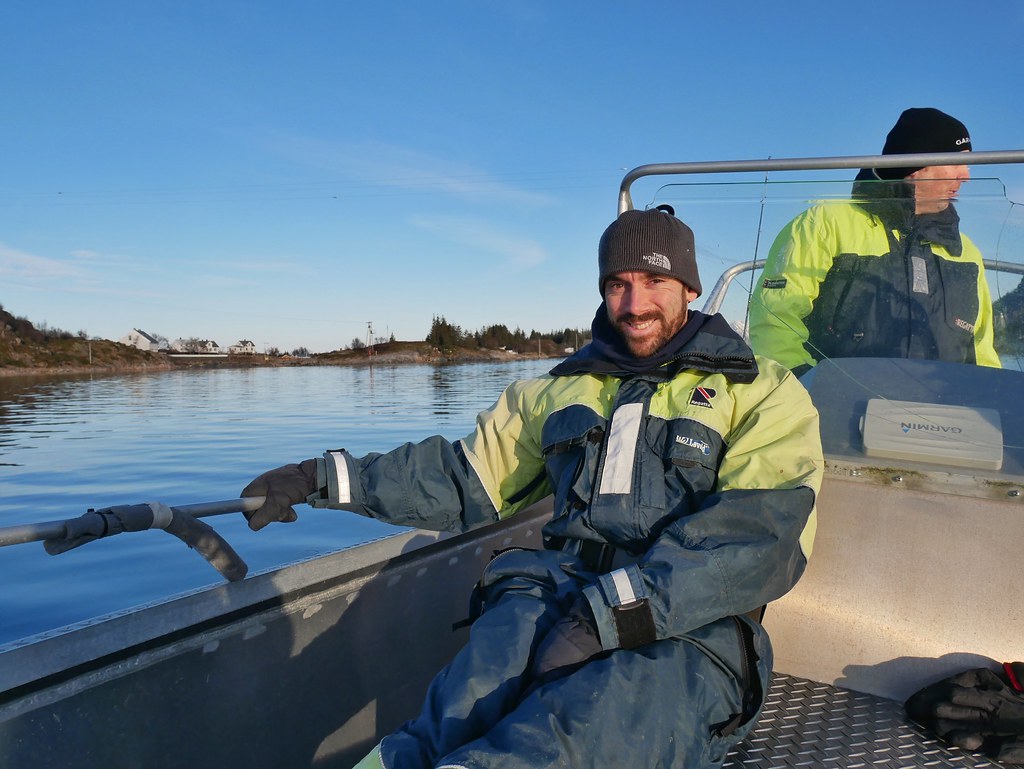 Manshaussen island is also well known for its award winning cabins made of glass and wood. It was like looking at the cover of a design magazine, they were so sleek and stylish yet they fitted in with the rustic surroundings perfectly. The cabins almost sat above the water and the whole front was glass with a couple of funky chairs to lounge on. The only downside is they totally lacked privacy, especially when we went past and I photographed every cabin like a right nosey parker. They had a nice view to the right, towards the mountains but the main view was of a gentle mound of an island. So I can safely say that the view where we’re living at Nordskot Brygge is much more impressive. 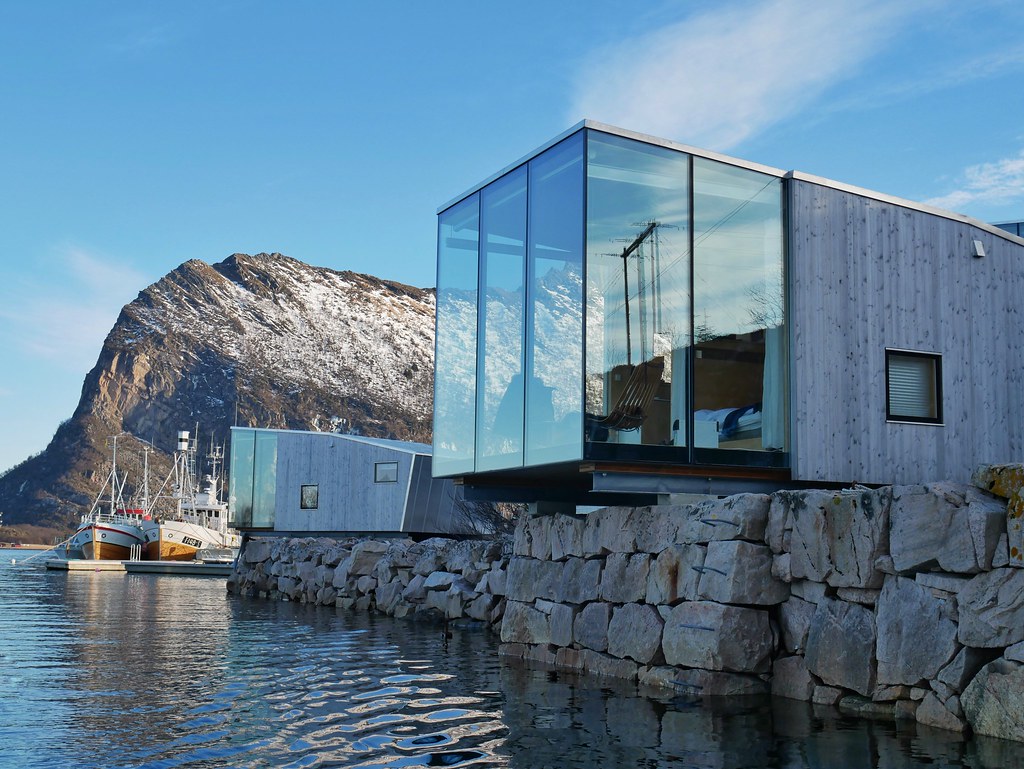 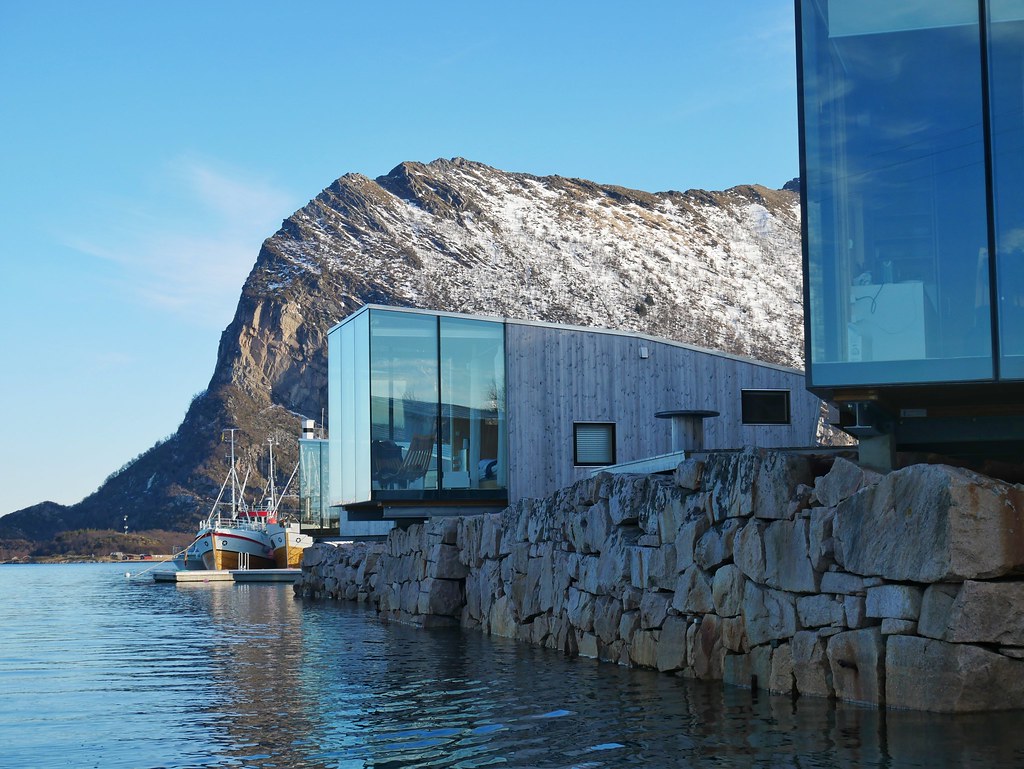 We circled around Manshaussen so that we could get a view of our jetty, from a different perspective as it was dark when we arrived on the ferry. The white buildings looked minuscule compared to the colossal peaks behind them, and the mountains were mirrored on the glassy sea. 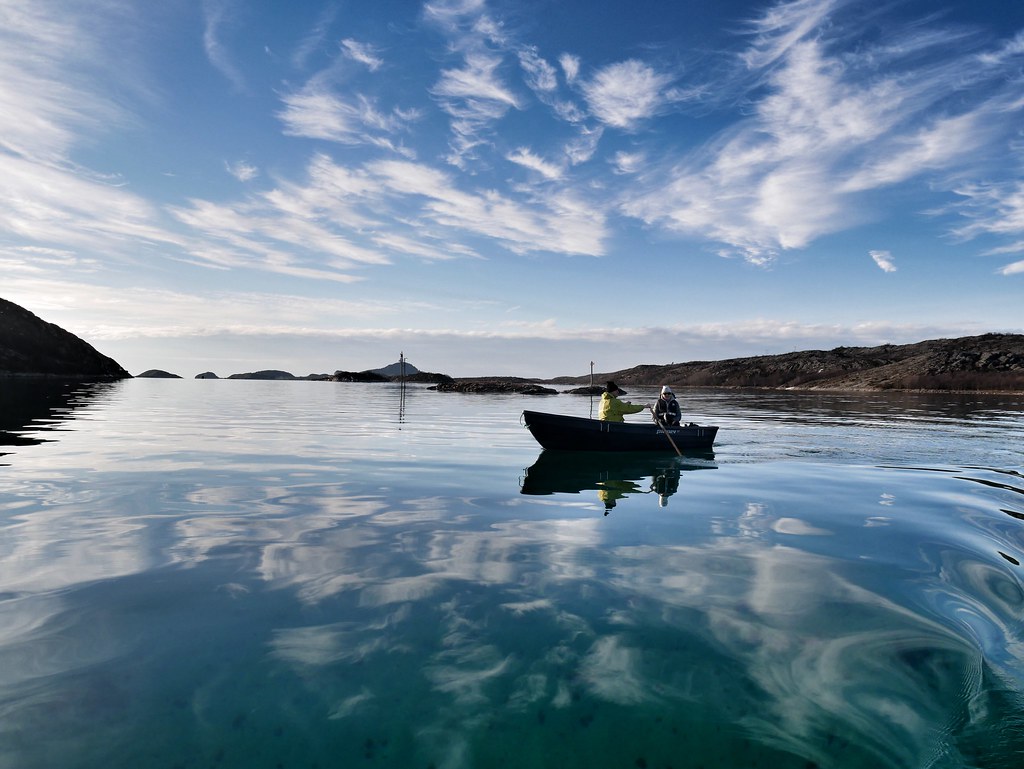 We then turned and headed between two islands. The water here was as flat as a pancake, without a single ripple on the surface. I was torn between gawping at the perfect reflections of red cabins and mountains or being mesmerised by the crystal clear sea below us. It was like the Caribbean; a fabulous turquoise colour with the odd rock or seaweed on the sea floor. We navigated under a bridge, which must feel like a lifeline if you lived on one of these two islands. A cluster of cabins we passed were all abandoned in the 1960’s and are now used as holiday accommodation. 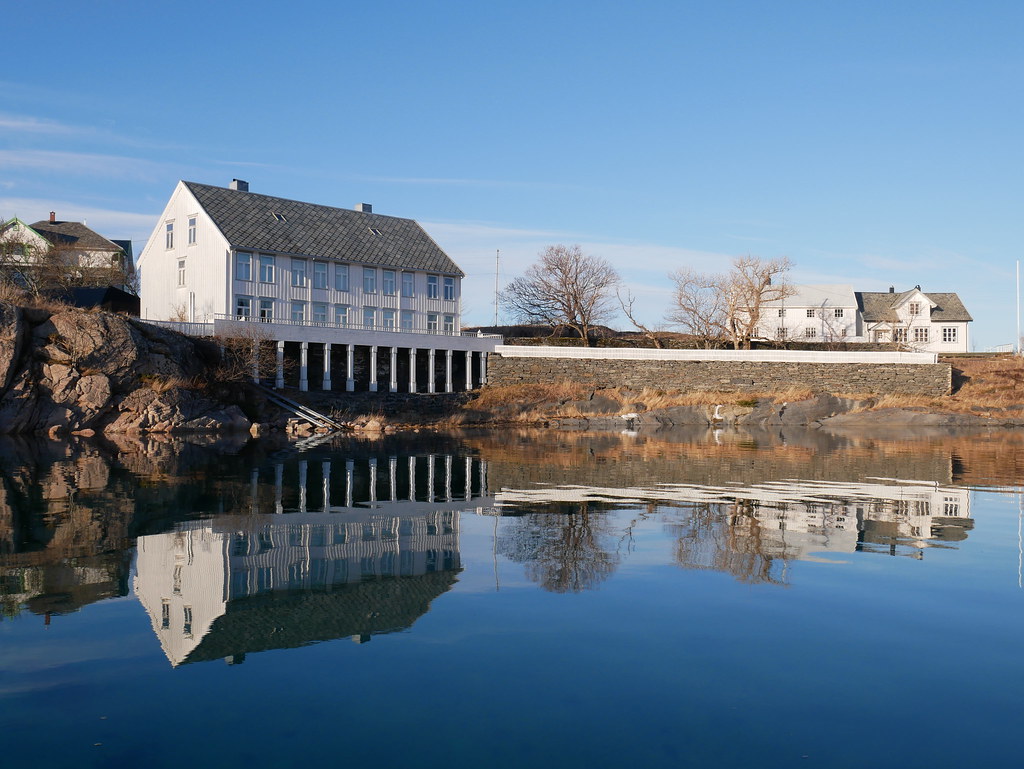 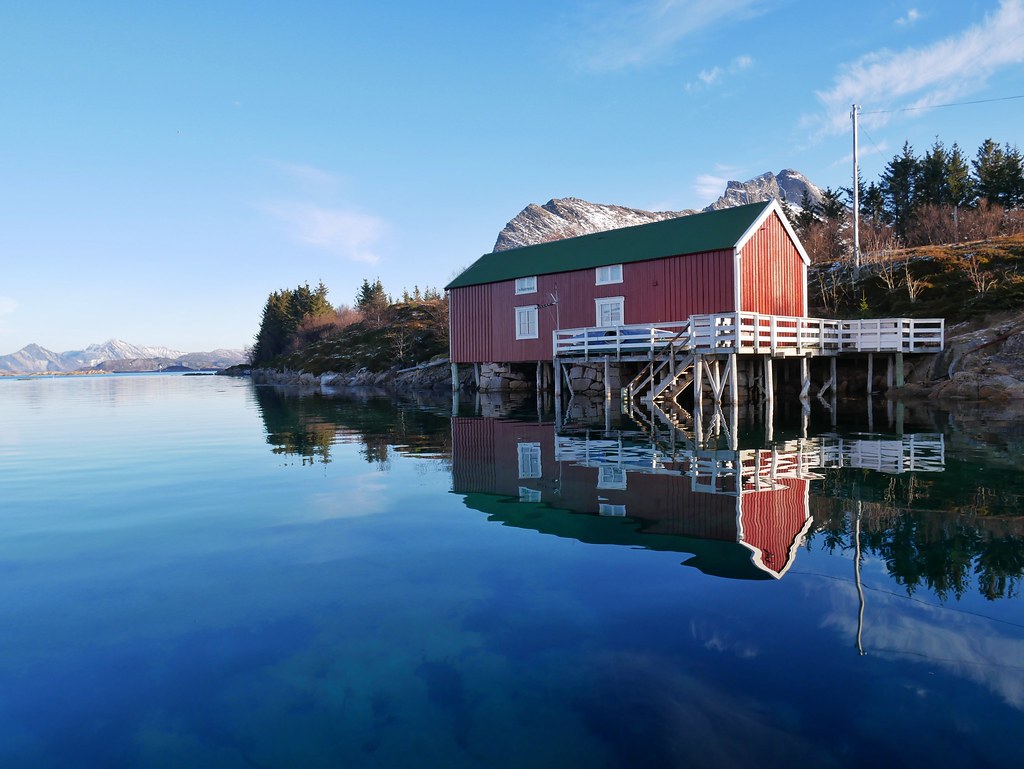 The captain then hit full speed and we whizzed off with a chilly air hitting our faces. We went around some islands so we could see the open-sea. If you just continued left there would be nothing in your way until you reached Iceland. To the right were the jagged peaks of the Lofotens Islands. We passed some puffins which we haven’t seen in a few years and we were reminded of their clumsiness. Their faces are painted like clowns and they really struggle to take off after sitting in the water and spend ages just flapping frantically, half in and half out the sea. 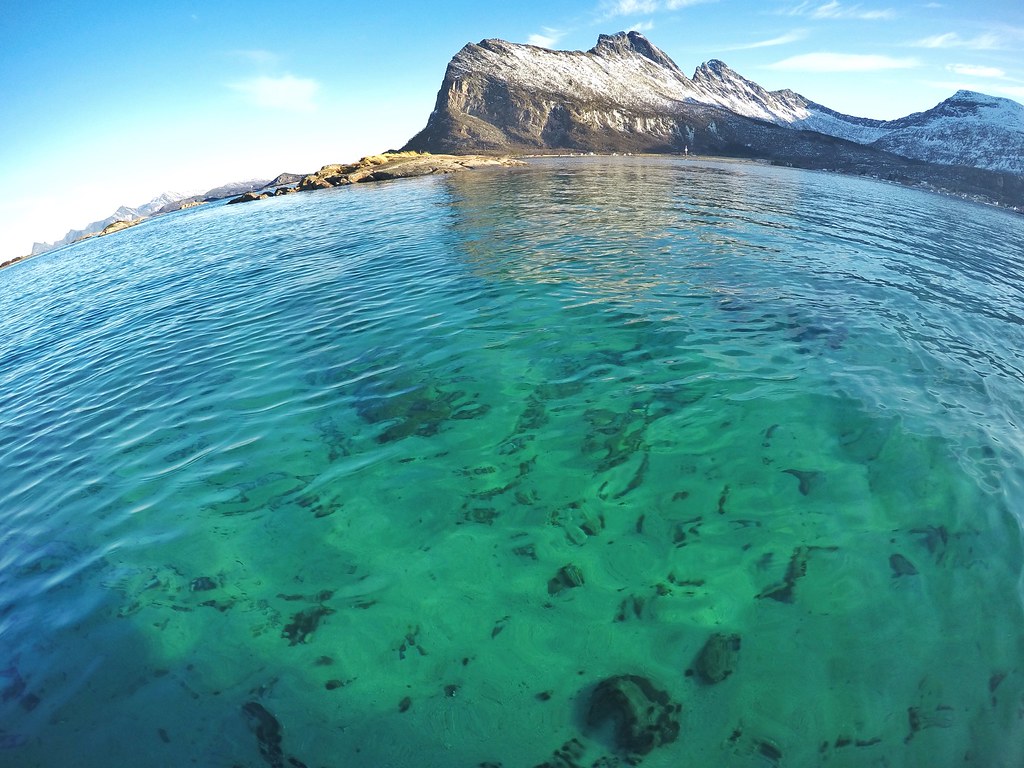 On our way back we stopped above some drop-offs to try our luck at fishing. It’s not quite the season yet, but from mid March this village hums with activity as fishermen try out some of the best fishing spots in the world. We’re beginners when it comes to fishing, in fact the lure we used today was the same size as the first fish I caught in New Zealand! It was a 42cm rainbow trout which Craig ate for dinner, and ever since then he’s had an intolerance to fish. Part of me was hoping we didn’t catch any fish today so I could avoid sharing a small room with him farting all night. Our host said a 1 meter fish is an ‘OK’ day here which sounded crazy. We tried a variety of drop offs from 10m to 60m deep, but today was not a good day for catching fish and we left empty handed. Although I did think I caught a big one when my rod began bending, turns out I just caught a rock on the sea floor. We headed back home after a very fun excursion. It was great see the area by boat after living on the edge of the jetty and peering across at the islands every day. 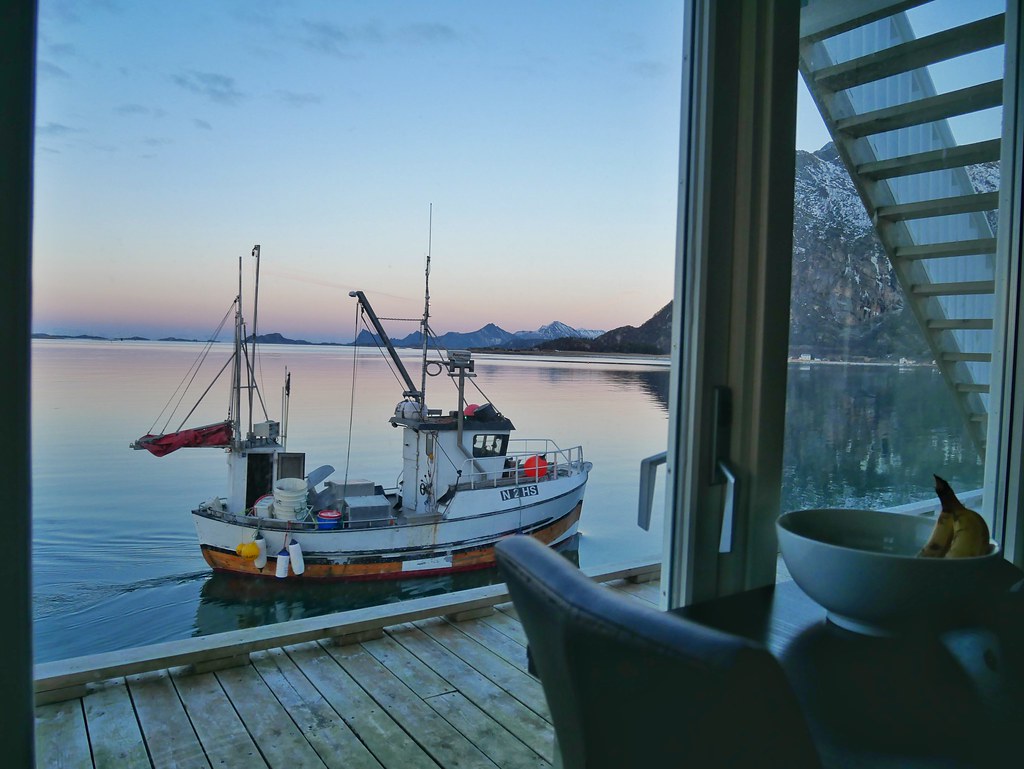