Most of the mountains that surround our village are only accessible if you have climbing gear. But there is one that looked possible for a hiker to summit so Craig set us the challenge. 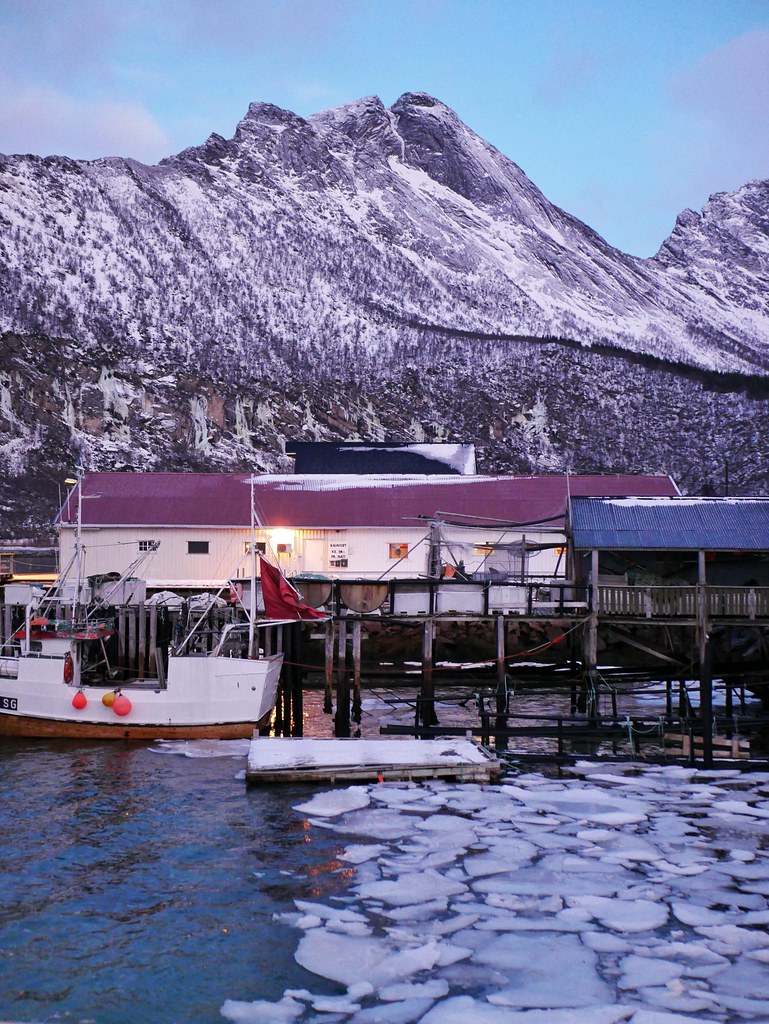 It took an hour walking along the road away from the village to reach the trail head. On the way we passed lots of beautiful frozen bays. The tide was high and there were incredible aqua pools where the slabs of ice had drifted away. One section was totally flat like an ice rink with some melted parts and the pink morning sky was reflected in the calm water. The scene looked like a fabulous painting. 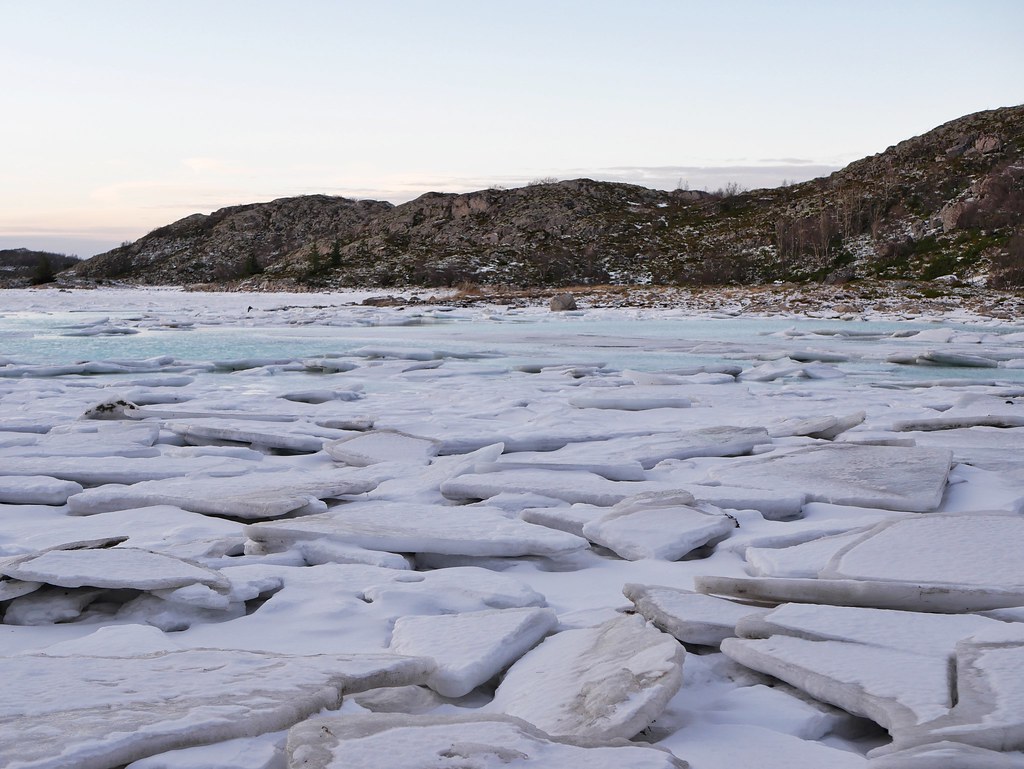 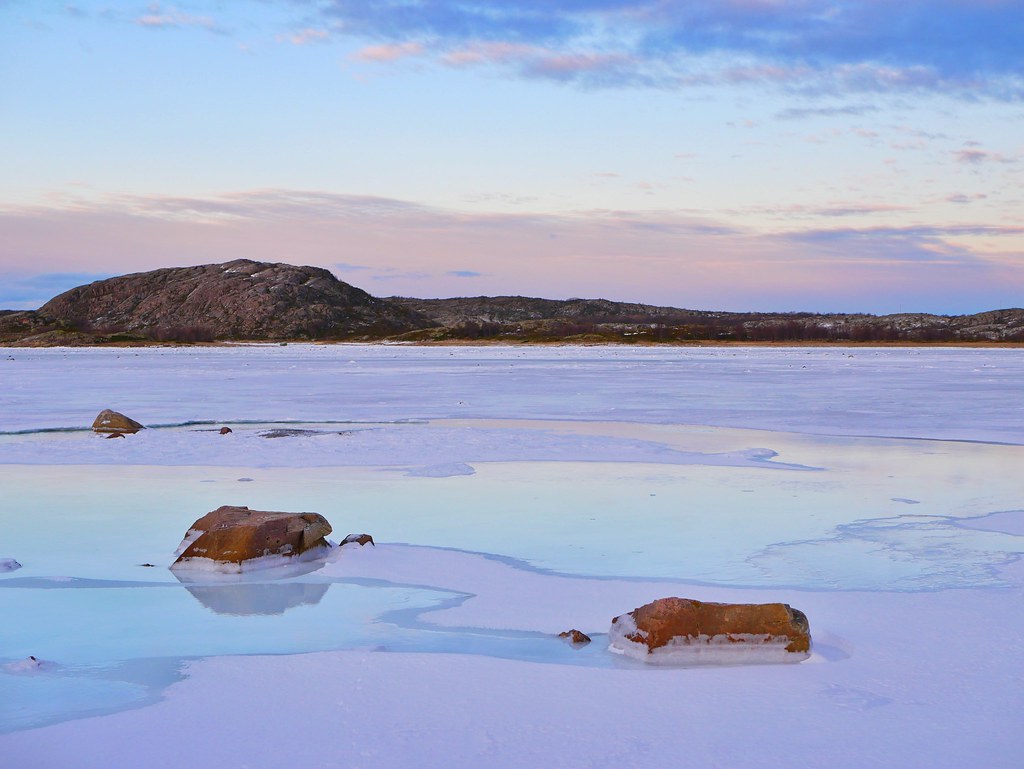 We also passed a spooky looking house, well, to us it looked like the sort of house that the chainsaw massacre would live in. It didn’t even have steps leading to the door. When I added a photo of it on Instagram a lady commented and said “In Newfoundland we call them the ‘mother-in-law’ door. They can’t come in, they can’t come visit!” Which I found hilarious! 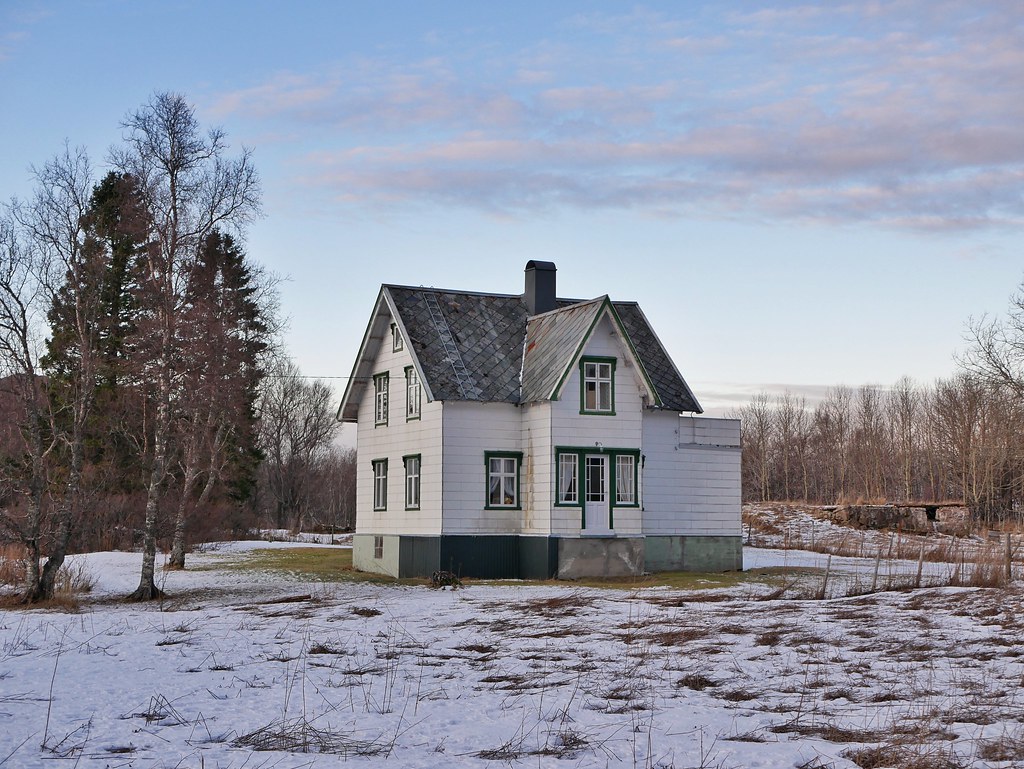 As soon as we reached the trail we put our new crampons on that my mum sent us as she was paranoid about us falling over. Sadly they didn’t make much difference to the icy path, but they sure helped on the rocks that we had to climb up. It was a gentle climb, passing a frozen waterfall and finally levelling out on a plateau. We reached a crossroads with two Norwegian words pointing straight and right. Right looked seriously steep so we opted for straight and continued walking along the snowy ground. There were animal prints everywhere; rabbits, birds, some sort of wolf prints I guess as there were no human prints to be walking a dog, and moose prints. Weirdly the strides from the moose looked way too long. We tried lunging along the ground to see how big of a step we could do and it wasn’t even close. We thought maybe the moose was running, but the prints didn’t match up, and then we knew exactly what it was from, a Yeti.

It didn’t take us long to realise our trail wasn’t heading up the mountain. We were pretty exhausted already as we’re finding it tough walking with a thousand layers on, we always leave the house looking like Joey from Friends in all of Chandlers clothes (if you know, you know). We wouldn’t be able to turn back and take the right trail with the limited daylight hours so we opted to hike up to an interesting balanced boulder we spotted. It was a stupidly steep climb but we made it to the top, realised the boulder was way to risky to stand on, and just had a picnic on a blanket…blanket of snow that is. 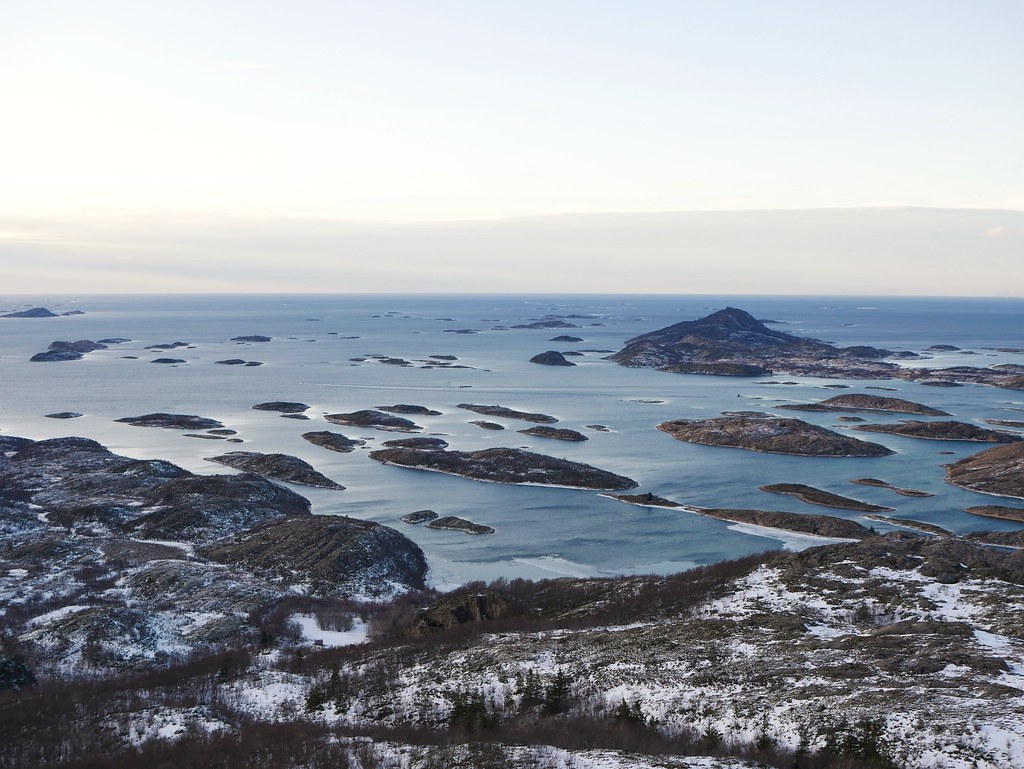 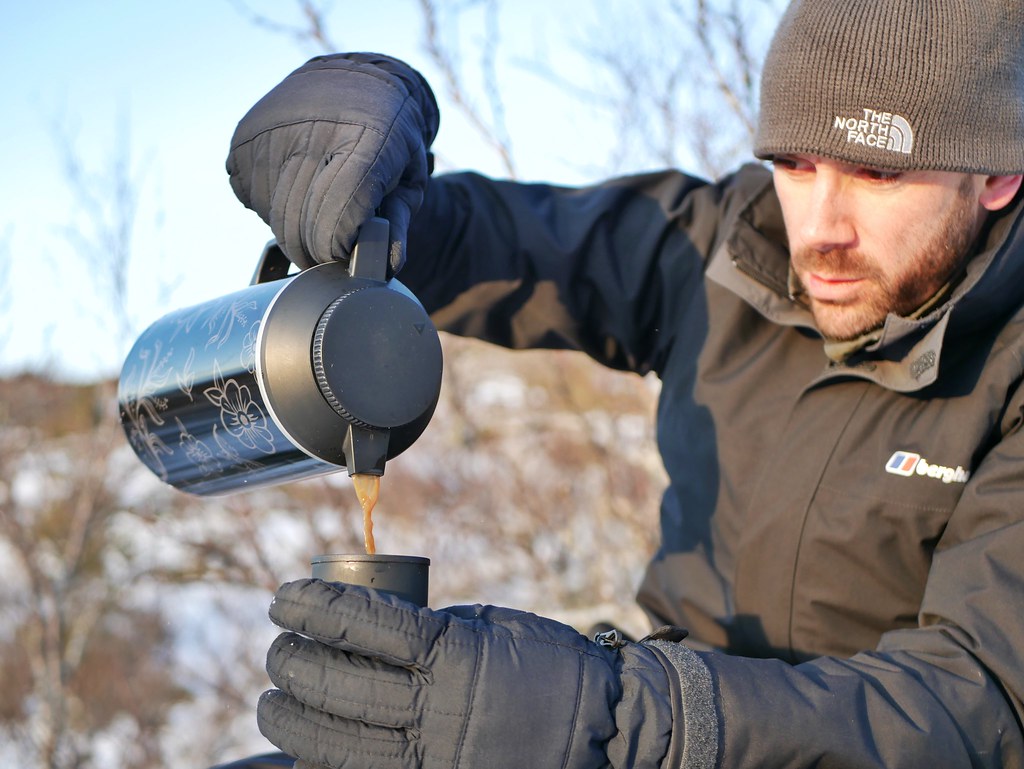 On the way back I spotted what looked like runny animal excrement along the trail. Then we realised it was the flask of coffee in Craig’s back and he hadn’t screwed the lid back on so that was a bit of a disaster.

Craig obviously wanted to try the hike again, so the next week we got a ride with our host to the trailhead to cut the walk down a little. We plowed up the rocks and followed our coffee droplets on the snow before turning right. Some rocks were totally covered in thick ice and it was a really tricky walk to attempt in winter. The right route was certainly steeper and I wasn’t enjoying the challenge much. Craig was going ahead and slamming his feet along the steep slopes to create footholds for me to follow. The path was totally unknown in the snowy conditions so we made our own trail and we had to rely on trees and branches to pull and heave ourselves up the steep sections. We finally reached a ridge-line which headed out above the sea, the end was marked with a cairn and we had a great view down to all the tiny islands. Once we were back on track, the section of land we were walking along was really narrowing. To the right was a drop off and to the left was a steep slope, which we veered towards as there were trees throughout to grab onto should we have needed too. After a couple hours walking it just became too risky so we admitted defeat and headed back down. Craig opted to sit on his bum and slide down some hills. 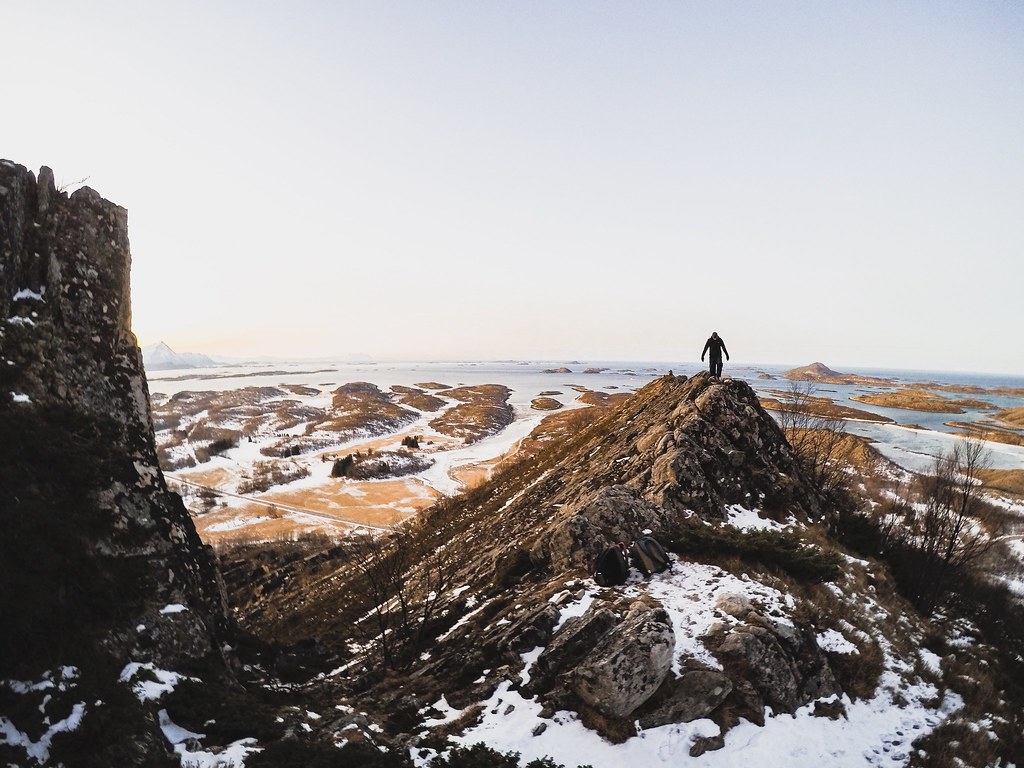 It’s definitely not an easy mountain to climb in winter, although I think it would be quite doable with proper spiked crampons. We did have some fun on the way back as it was low tide and we could carefully walk along the triangular slabs of ice left in the bay. We even lifted up some huge slabs and had fun challenging ourselves to pick up the biggest piece of ice. We might not of made it up the summit, but the sights in between made it worth it. 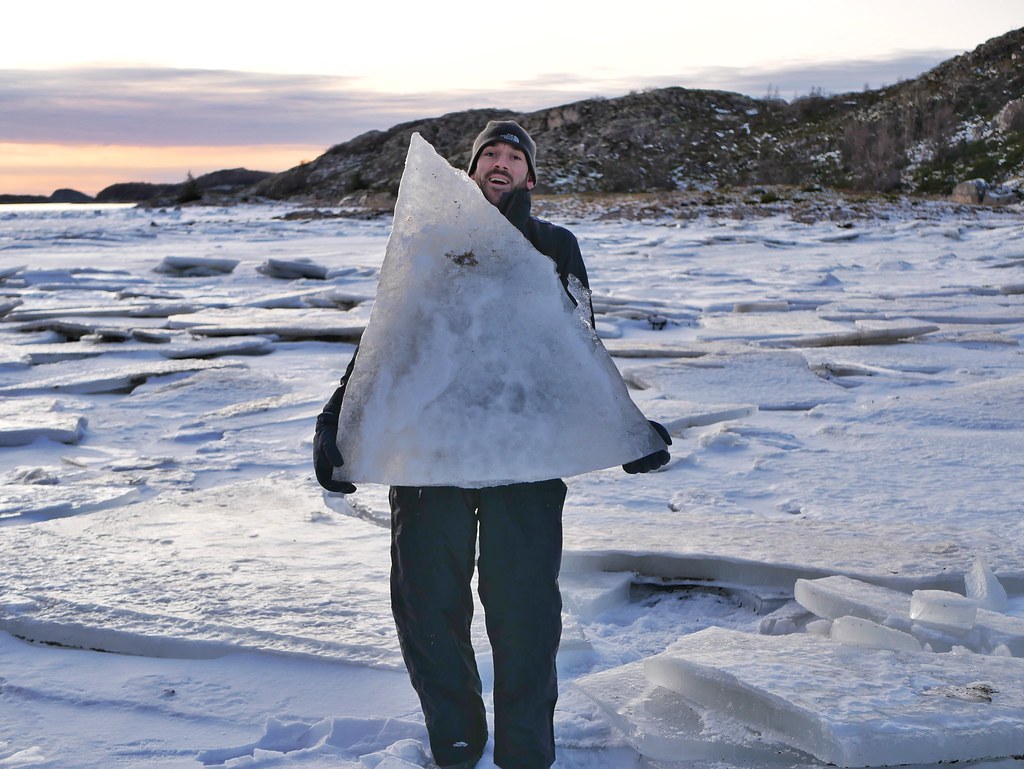 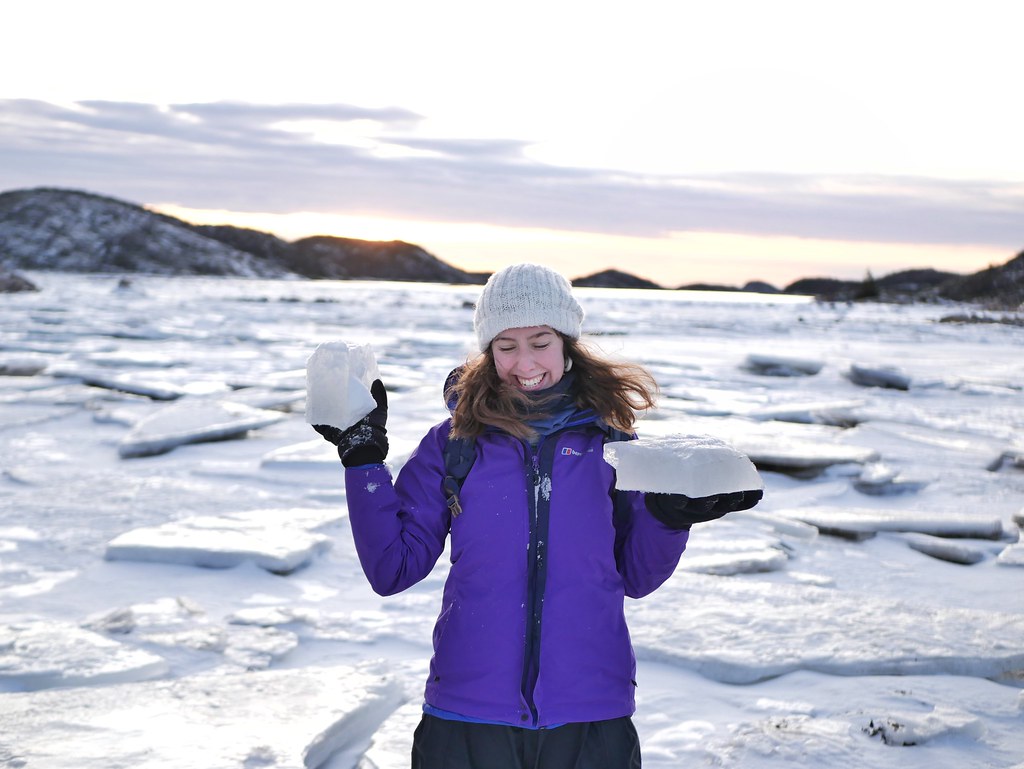