You see all the good times of vanlife smeared across social media these days, but is it really as idyllic as it looks? What you don’t see is the breakdowns, the expensive mechanics bills, the restless nights spent in dodgy car parks and the general shit times. It’s still our favourite way to explore the world but I thought I’d enlighten you into the non-instagrammed moments of life on the road. 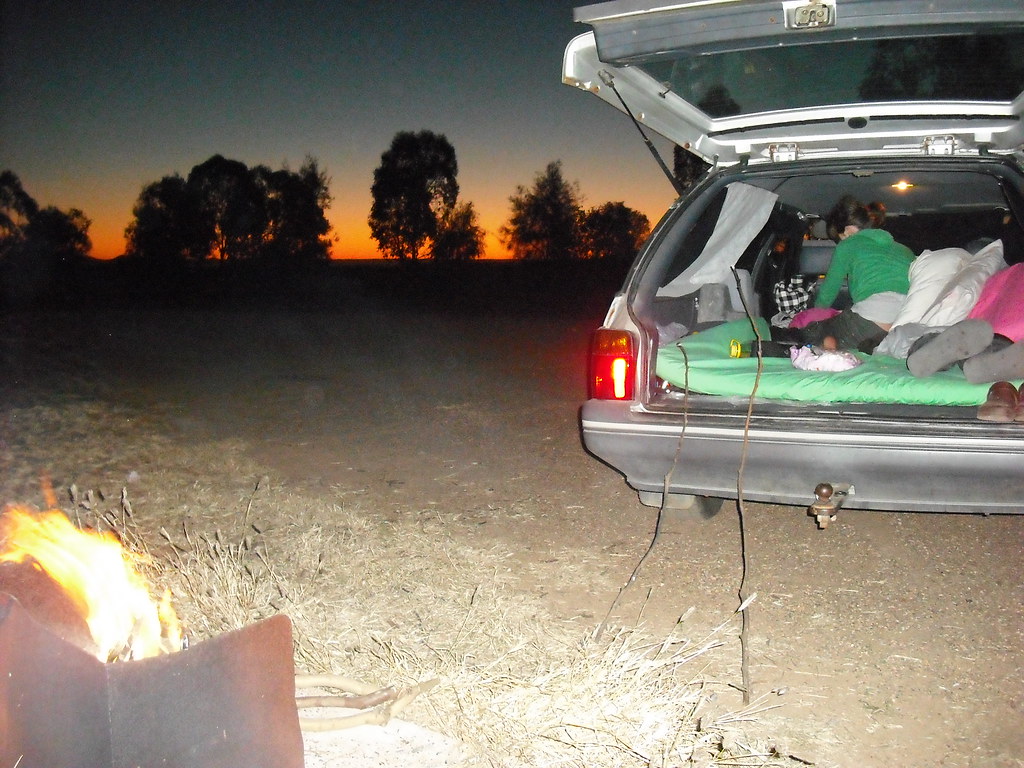 Our first home on wheels wasn’t technically a van, it was a station wagon which we lived in for 9 months in Australia. When we bought it we were told we could camp for free anywhere we liked – so we did exactly that and enjoyed staying in car parks and pullouts overlooking dreamy beaches. Sadly a lot of the places we camped attracted drug dealers or young lads who thought they were rally drivers. We had some pretty scary moments in Australia; one time two cars repeatedly drove circles around us, doing tighter and tighter doughnuts while we tried to not panic inside the car and shit all over our bed. We also had a drugged up girl threatening to slash our tires and I had the worst case of nervous wee’s because I was trapped in the car. 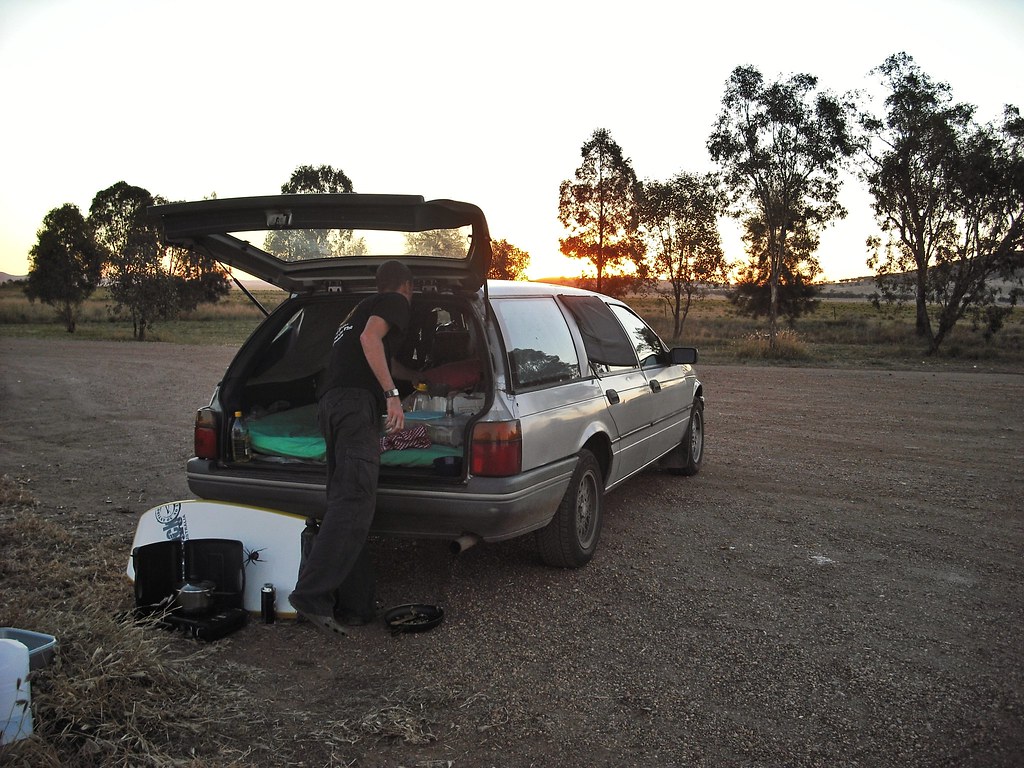 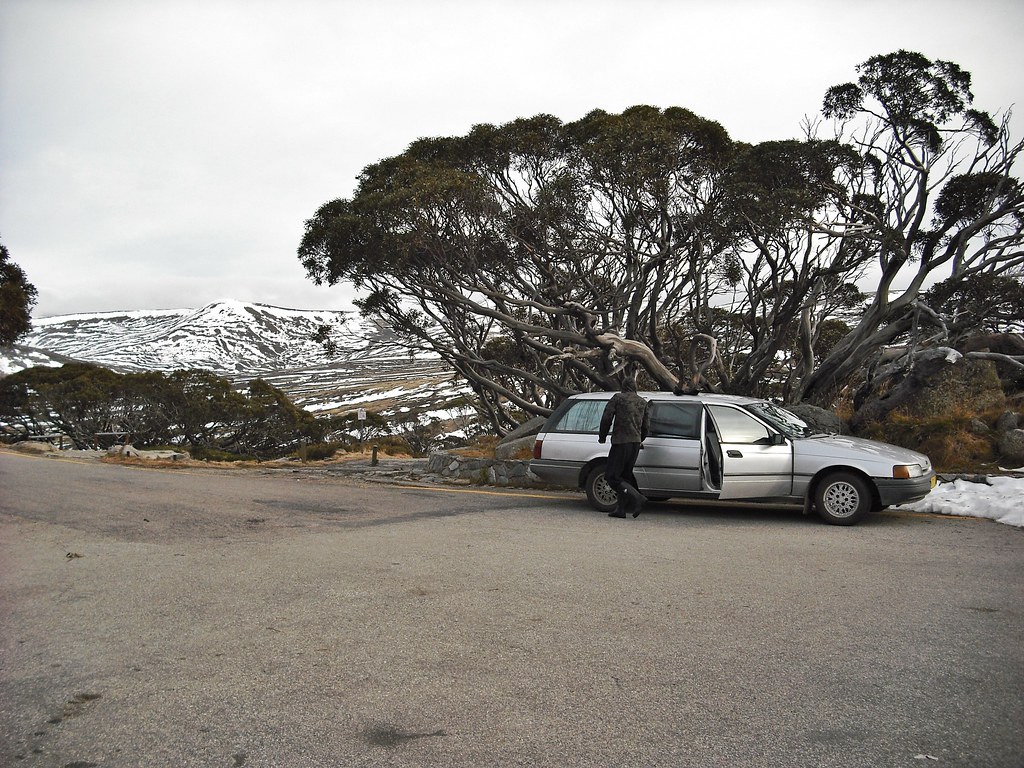 It was only when we drove north that we discovered it was actually illegal to wild camp and suddenly we had to be coy about where we slept every night. We were moved on by cops fairly regularly as we made our way up the popular east coast. We’d wake up covered in sweat and have to find somewhere else to camp hoping we could get back to sleep in the unbearable heat. We had most of our dramas in that shitty station wagon. It leaked really badly in heavy rain and one time it flooded the car foot-wells and drenched our mattress. We had to drive to an undercover car park where we actually wrung the mattress out and had to put it on the roof to dry overnight while I slept on the front seats and Craig on a sun visor on the car park floor. When we couldn’t find the cause of the leak we ended up drilling three holes in Craigs foot-well where the water collected so at least it could drain away. The leak, us sweating and the general humid conditions put our 3 inch mattress in a pretty bad state and it began to get mould which grossed me out. So one day we bought a mould killing spray, we blitzed the mattress and stood in shock as it began dissolving the foam and it ended up looking like a piece of Swiss cheese with holes through it. 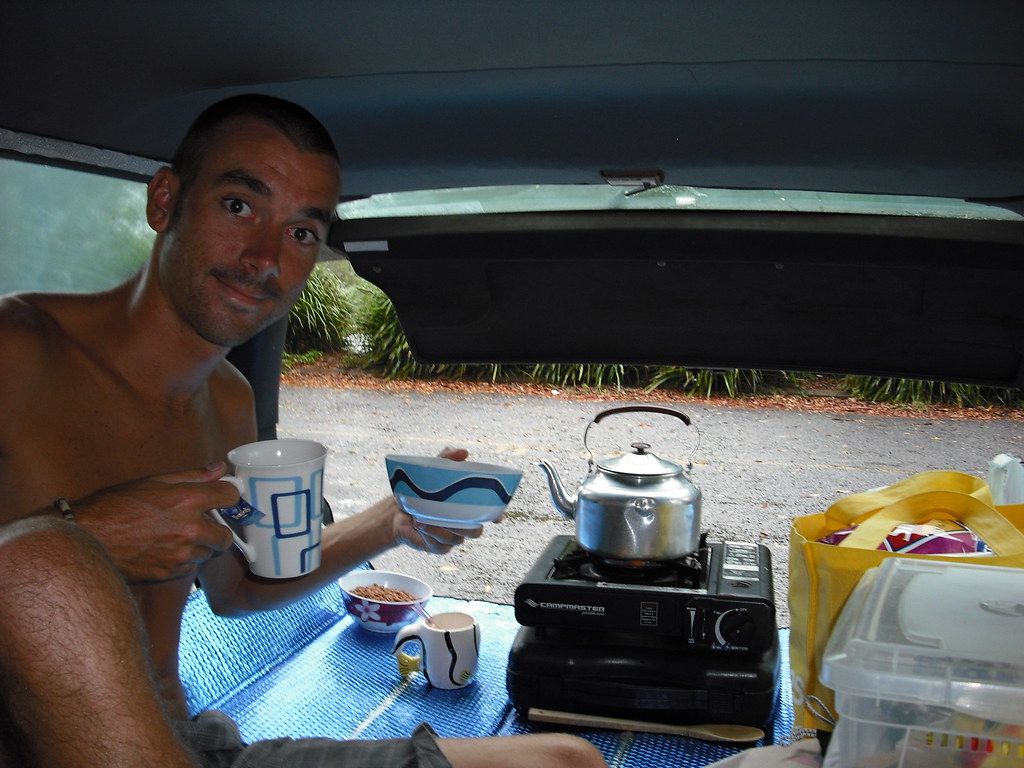 The heat was one of the toughest things about Australia, we’d sleep with the windows wide open and even the doors at times. This ended up being an unintentional invite to Australia’s creepy crawlies; on one occasion we must of parked under a huntsman spiders nest as three hand-size spiders dropped onto our car and one ended up on the inside. It was actually one of the scariest nights of my life, it was pitch black outside and Craig was squealing like a girl and shining a torch into the car where I was trapped with the monster-spider. At the time we didn’t know if it was a venomous spider or what the heck we should do. Was there a number we should call for help? Why doesn’t Australia hand out insect identification cards as you enter the country?! The spider began crawling across the back window and I was shaking like a leaf preparing myself for the kill while Craig squealed again and shouted “Kill it Lauren!! Get it!”. 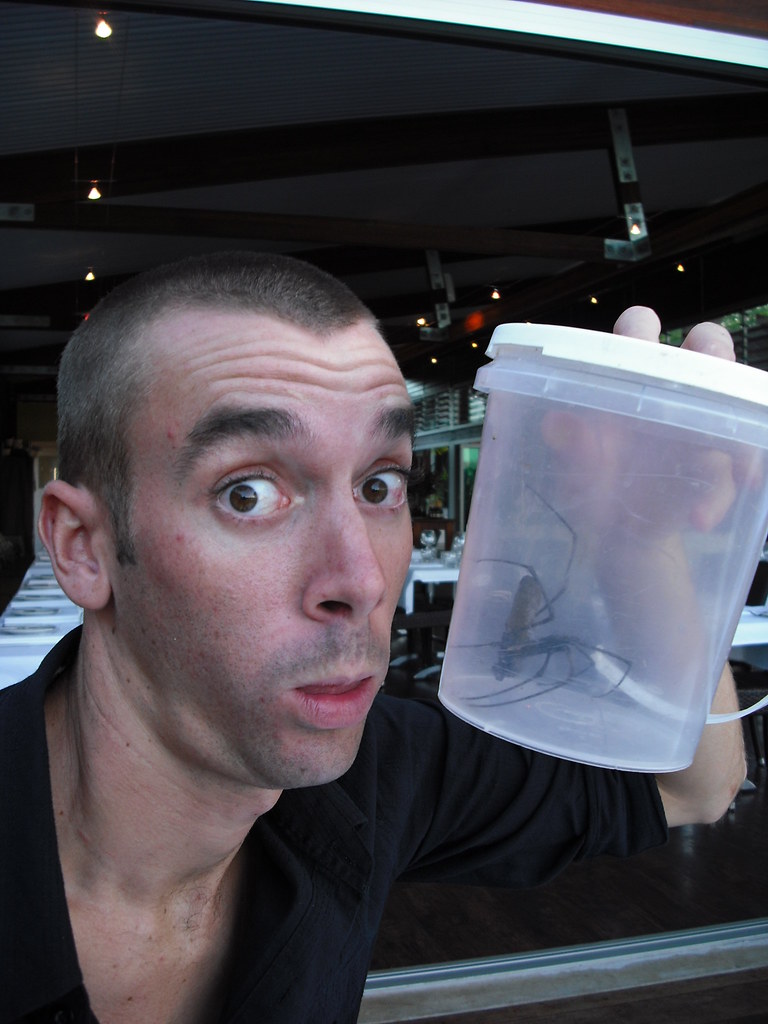 We also had a family of mice torment us on cold, windy nights. I really hated the mice. They’d run up and down the side panels and we’d wake to a half eaten loaf of bread. On a few occasions we could hear new mice running on the roof, trying to get in so we’d drive as fast as we could, swerving along the road to try and swing them off. It was times like that when we questioned living in a vehicle. We also really struggled to sell our station wagon because it had New South Wales plates and we were selling in Victoria. So after buying one of the worlds smallest homes on wheels for a whopping $4600 we were having to sell it for just $1000. We learnt our lesson after that and have sold the rest of our campers for around the same price as we bought them for. Sometimes the biggest panic about living in a van is the beginning and the end of the trip – the relentless days searching for a campervan and the stressful times trying to sell it. After 5 months working in Toronto we were ready for our road trip to begin, we handed in our notice for our jobs and flat…but then we couldn’t find a decent van in our price range. We didn’t end up finding a van to buy until the day before we were moving out of our flat. We drove Beatrice (the van) straight to IKEA and Canadian tire, filled the van with everything we needed to live and at midnight we left Toronto and stayed in a Tim Hortan’s car park. The van was a complete mess and I hadn’t had a chance to make curtains so we stuck bin-bags on the windows. When we woke up in the warm sun the bags had all melted off and we were on view to everyone getting their morning coffee. 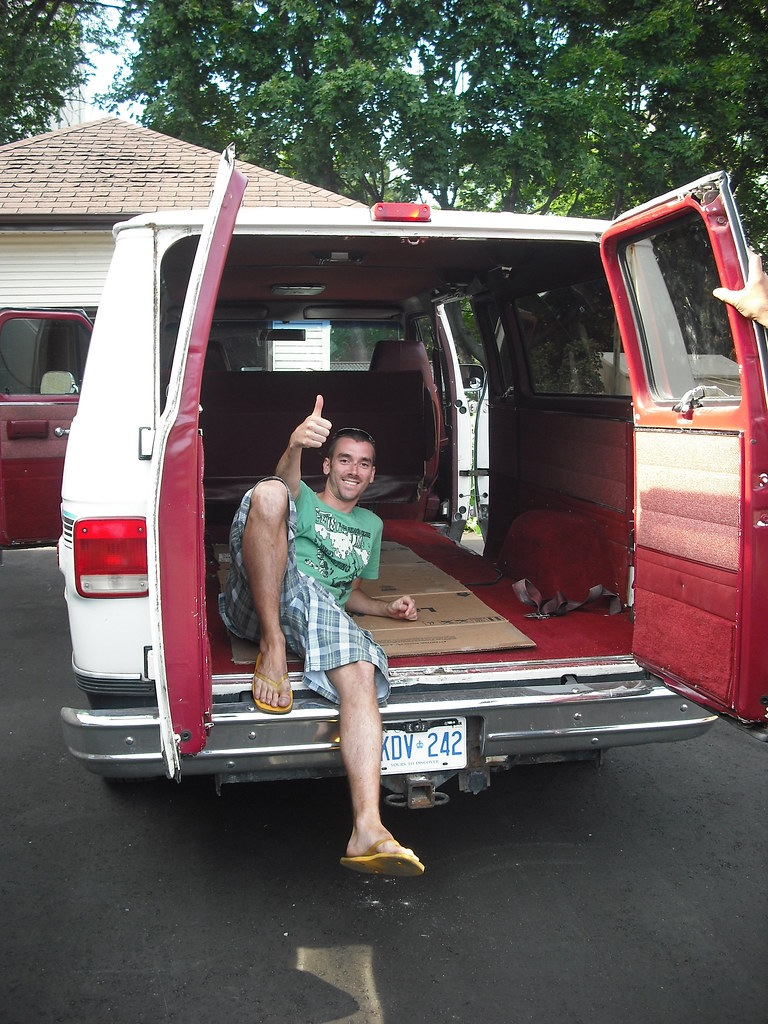 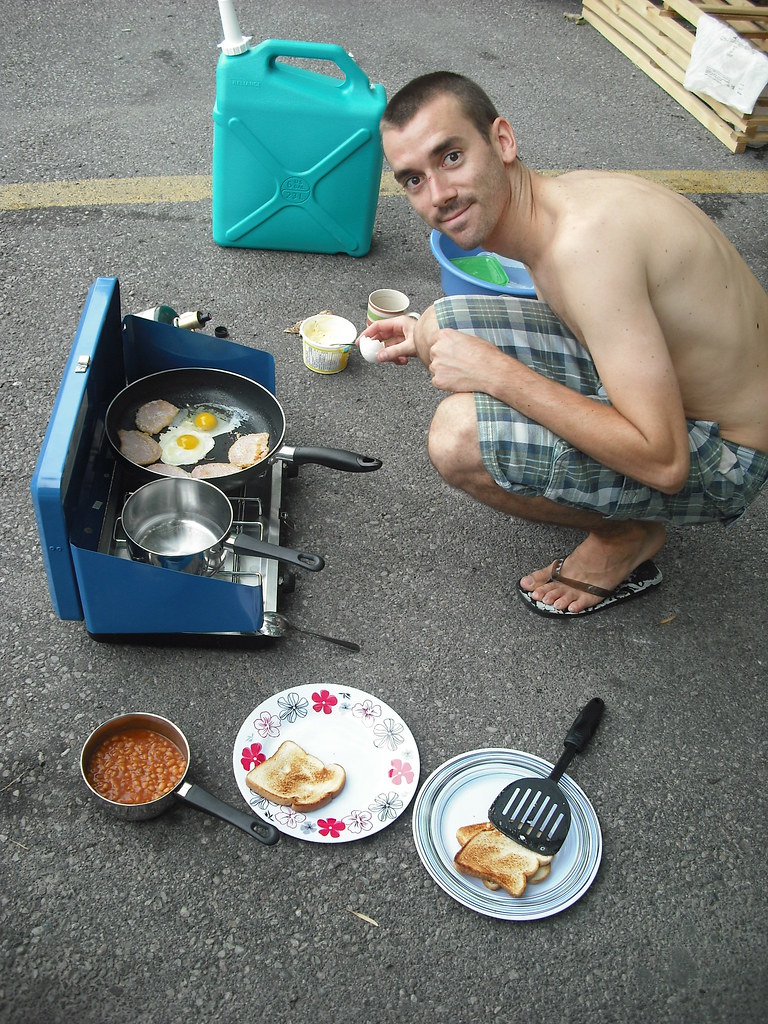 We didn’t have the best of experiences in New Brunswick. We went off the beaten track in the hope of finding moose and we ended up at a perfect area to wild camp by the river. I was shaving my legs on some rocks while Craig collected sticks for the fire and neatly arranged them by size. We hadn’t passed a single car all day but the first one rumbled over the dirt road at dusk and quickly slammed its brakes on and reversed into our little camp spot, totally blocking us in. The men were clearly drunk and threw beer cans into the forest as they walked our way. They asked us what we were doing in the middle of nowhere, “Ain’t nobody gonna find you out here, your in butt-fuck-nowhere”. Needless to say we felt very uncomfortable, it was like the beginning of a hillbilly movie and I could hear the banjo from deliverance in the back of my head. I was still in my bikini so I scurried back to our van and just hid inside while Craig made awkward conversation with them. It turned out that these guys had seen our fire-pit earlier in the day, they’d spent the afternoon moose hunting and wanted to cook their moose meat. I’m pretty sure most normal folk would ask nicely to use the fire, or think, ah there’s already a campervan there, we’ll have to look for another spot for ourselves. But not these guys, in fact I think Craig was more scared for himself than for me as the men continued to say “your in butt-fuck-nowhere”. I literally hid in the van with a knife, knowing full well that they all had guns, while Craig awkwardly sat outside with the men hoping they’d leave. They did eventually but we certainly didn’t sleep well knowing they could come back. 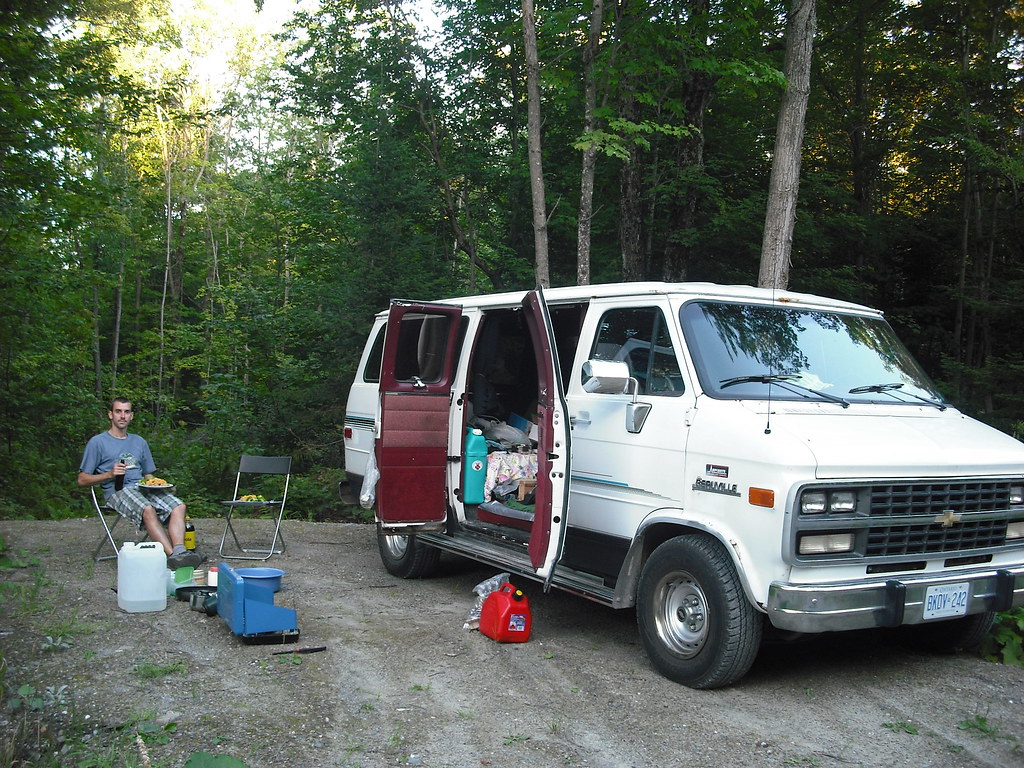 When we drove through the Mammoth Mountains in California it was peak winter season and they’d just had one of the heaviest snowfalls on record. Suddenly all the pullouts we’d usually camp in were filled with meters of snow. It was Christmas Eve and we were struggling to find a place to stay. We ended up in a library car park which was all fine and well until it snowed some more and we were awoken on Christmas Day by a snow plow pushing snow around our car. The beeping of his tractor machine sounded so close like he didn’t even know we were there and he was going to crash into us so Craig had to awkwardly run out in his long-johns. We had quite a battle trying to remove the snow so we could drive out. It would of been ok if we weren’t so cheap and didn’t buy a $2 plow from Walmart which snapped on its first use. With the cold weather at its peak for us, we were sleeping in -15 degrees. The windows froze on the inside, as did our breath on our pillows. The only heat we had was from a hot water bottle which we’d have to heat a few times during the night. Then one day our front heaters broke, the ones we used to defrost the frozen screen. So we had to prearrange with Chevy to sleep in their car park for the night and the next morning Craig drove into the garage with his door wide open and his head out the side so he could see where to drive. 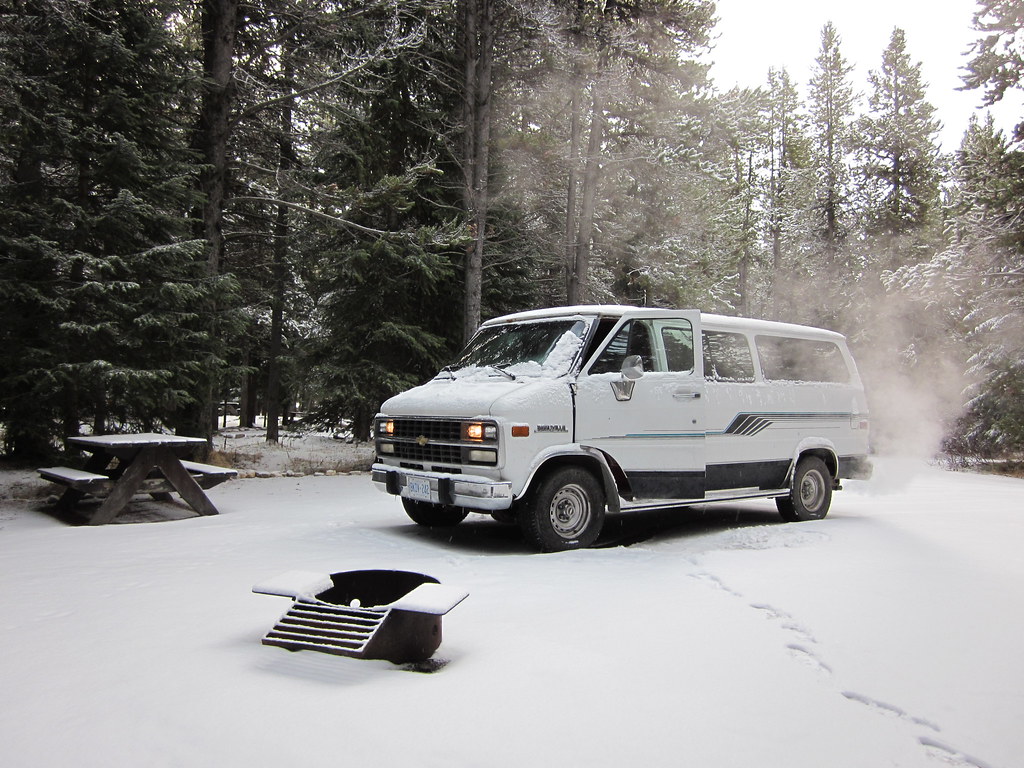 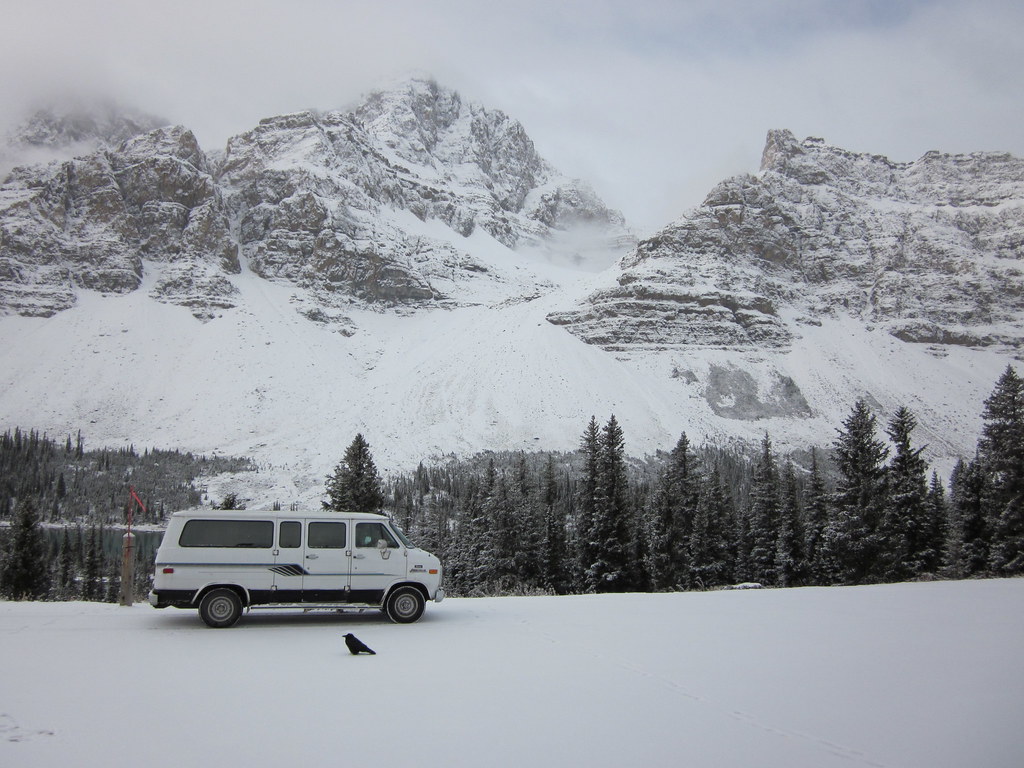 Our Canadian camper had a terrible battery and we got caught out on a few occasions. One particularly embarrassing time was a cold and rainy Halloween afternoon. We parked outside Starbucks and had a lazy day watching tv and calling home. When we finally went to leave our battery was as dead as a dodo. The problem was we were parked by a curb so Craig decided to roll back across the car park into another space so we could get a jump start. Sadly we didn’t pick up enough speed and we stopped in the middle of the road. Thank god for friendly Canadians who came out when they saw me trying to push the van on my own (this was before I learnt to drive so I got the pushing jobs!). Another time we got back from a hike and realised we’d left our lights on. We were parked by a busy road and didn’t want people to think we were hitchhiking so we made a sign and a lady quickly pulled over and it wasn’t to give us a jump start, but to let know our sign needed to be bolder as she couldn’t read it! 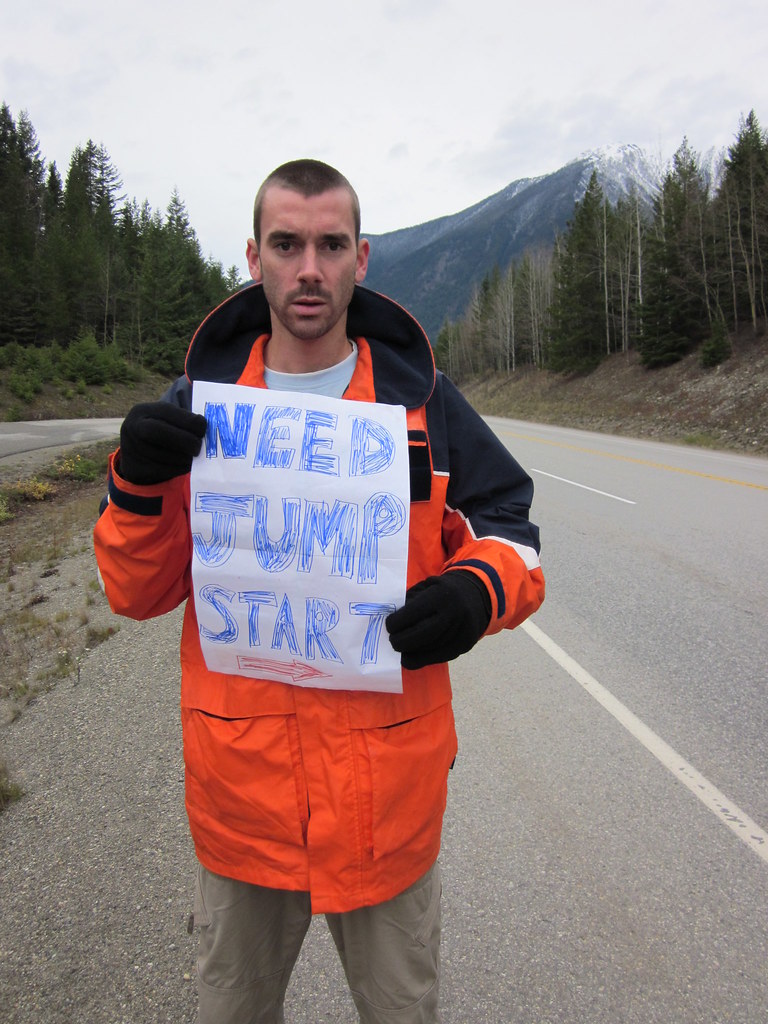 Another classic bad time in a campervan is when you get an upset belly. For some reason Craig got really bad diarrhoea one night in a small town in the prairies. We were staying in a Walmart car park but it was late at night and everywhere was closed, so Craig had to panic-run to a nearby hotel and plead to use their loo. I think he got the better deal than having to shit in the middle of nowhere though – it’s definitely easier running than crouching down trying to dig a hole big enough to contain a liquid explosion. Plus it’s creepy as hell in the woods at night, let alone when there’s bears around. 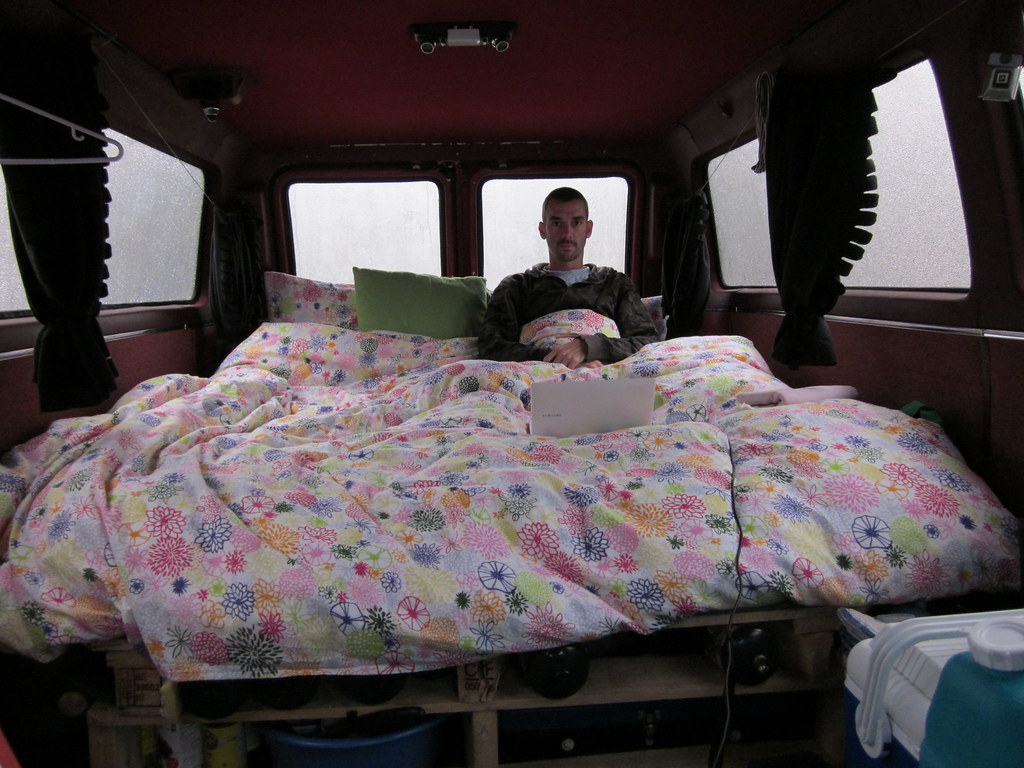 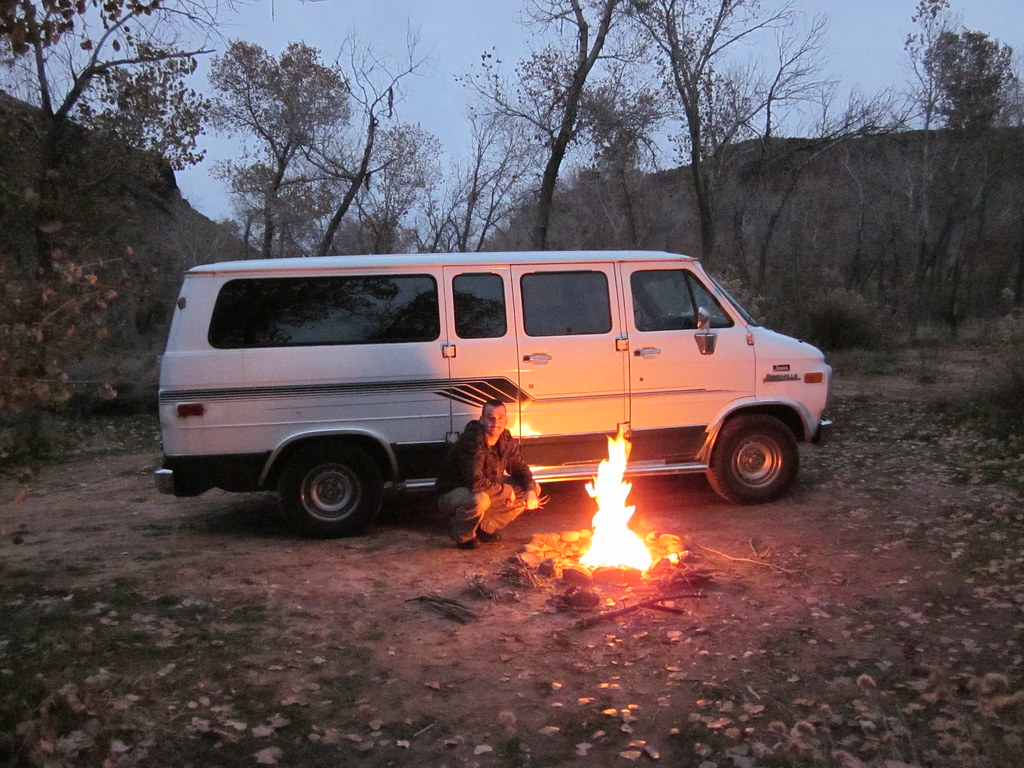 It can also be tough trying to stay clean in a van, especially when it’s cold outside. In Australia we’d heat pots of water on the electric cookers in parks or beaches and in America we would go awhile without washing…it was just too cold. Occasionally people would allow us to use their hot water so we could fill up our solar shower, we were still washing outside but it felt incredible to be clean again. 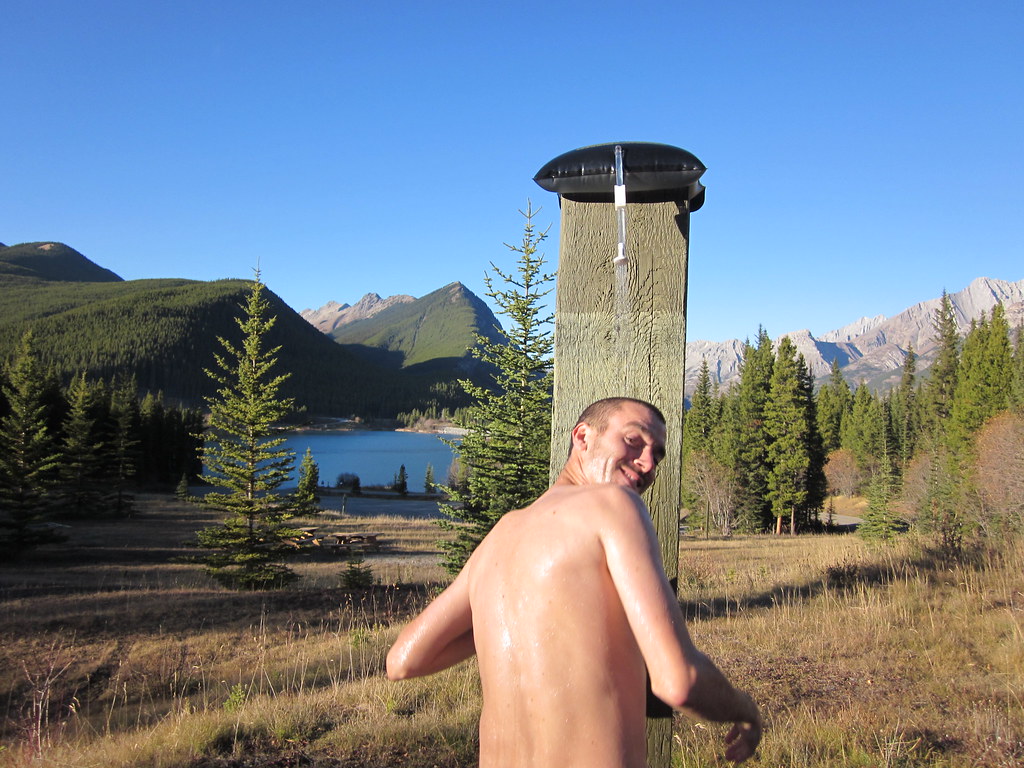 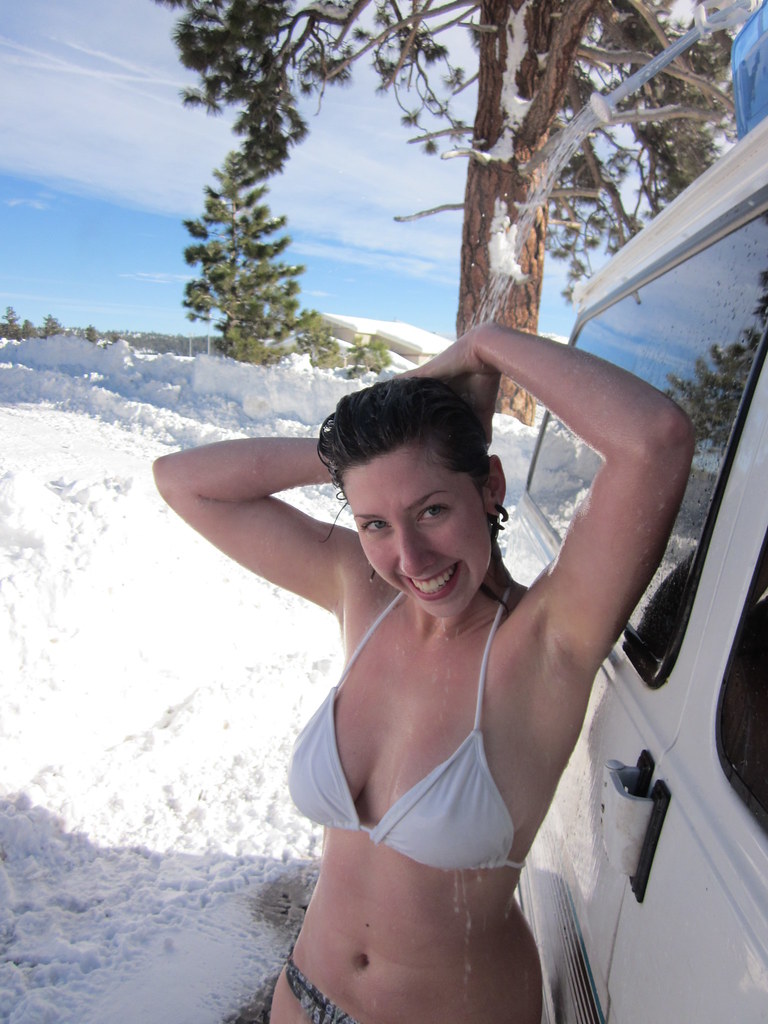 You certainly learn to appreciate the simple things in life when you live in a van. Even after the scary nights we’ve had, the breakdowns, the unbearable temperatures and the general struggles of living in a van, we still absolutely love it and can’t wait to get our next van and camp in paradise again.