We made an effort to walk a different part of the Algarve’s coastline on our days off and for our last trip we explored the area near Praia De São Rafael. There were two little beaches to the east and then we turned back and walked west along the coastal trail. The sea wasn’t crystal clear, once again – I can’t help but be a little disappointed with the sea in the Algarve. The wind can really pick up here, which is a relief in hot weather, but it churns up the sea and the waves whip up the sediment and make the water murky. In the 6 weeks we’ve spent in Portugal we’ve only had one day when the water was calm and crystal clear, just like the brochures promised. The scenery was still very impressive, with steep, colourful cliffs and rock formations protruding out the sea. We only walked as far as Praia Da Andorinhas, where there were actually two beaches with the same name. One was a little inland on our map and we soon realised why; it was a tiny beach surrounded by a circle of high cliffs and a small hole where the sea spilt through and came in waves over the fine sand. We spent a while running up and down the beach from the waves and then headed back, enjoying the sea views. 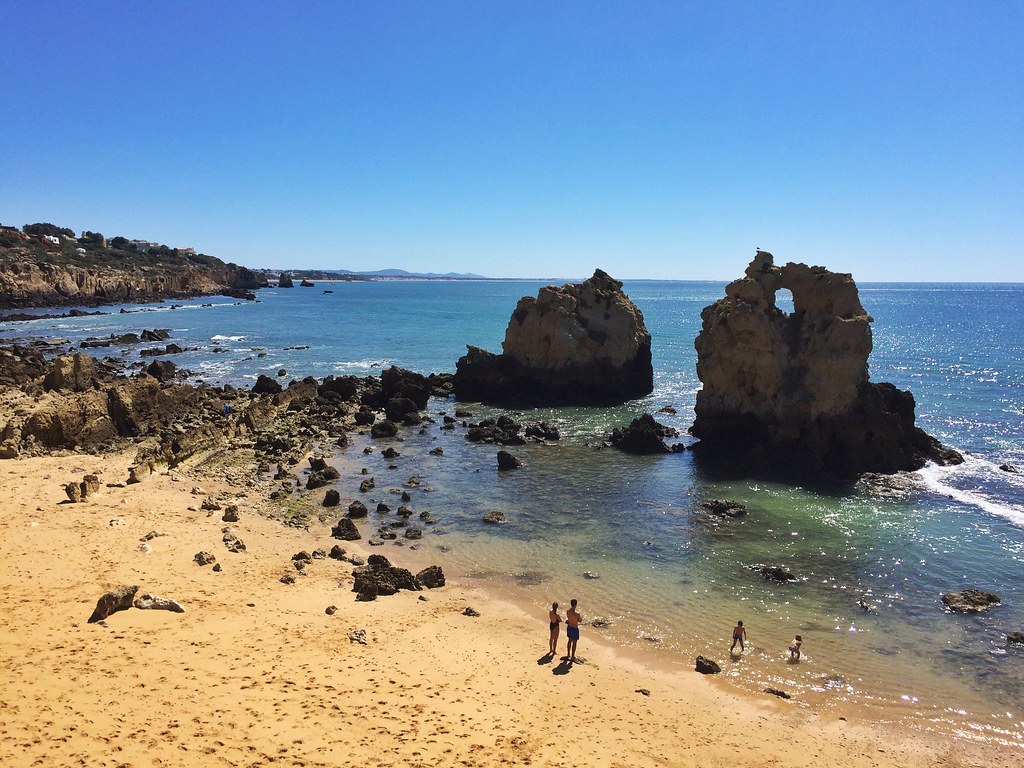 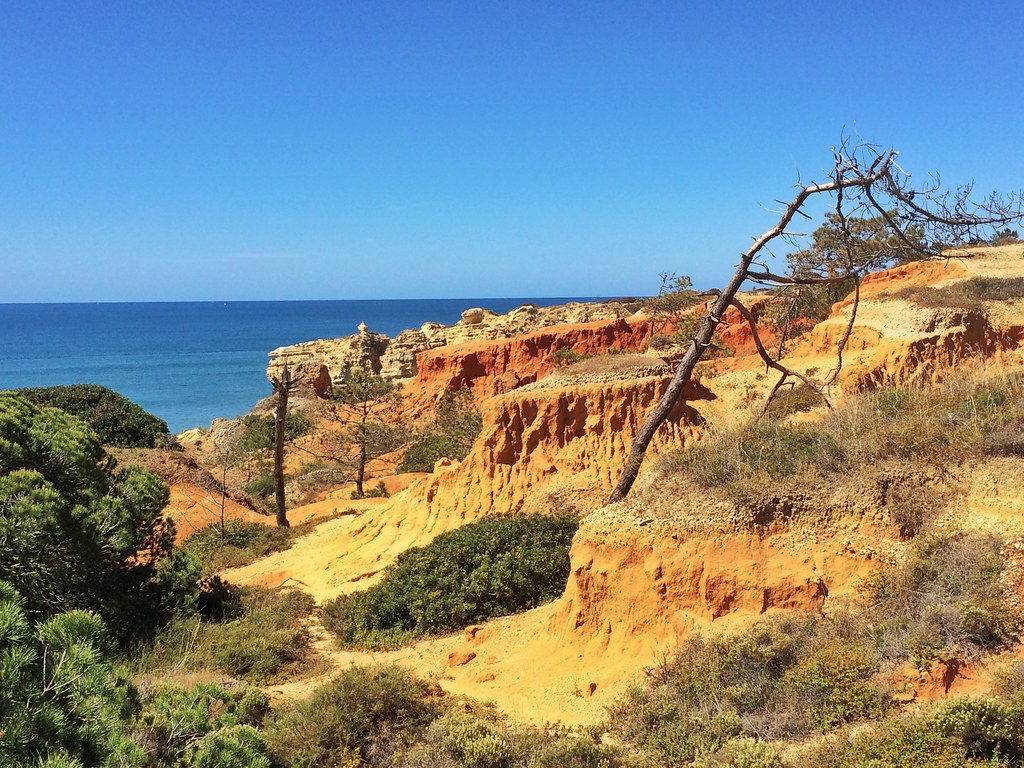 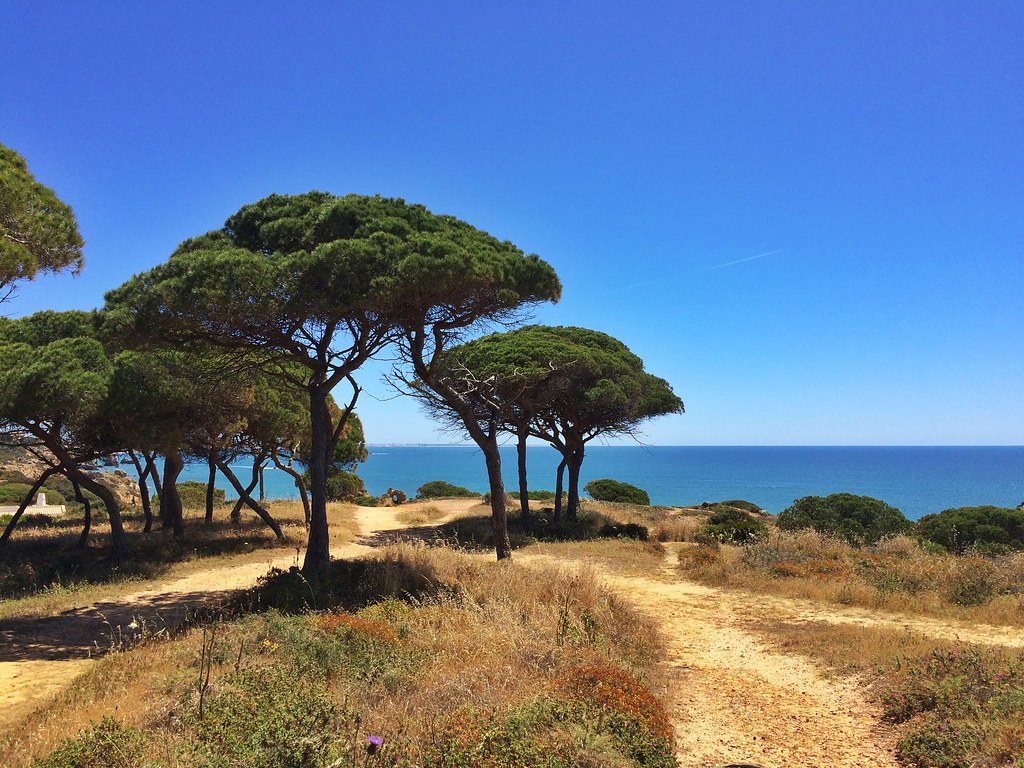 It was a bank holiday so when we got back to De São Rafael beach it was pretty busy with bus loads of Spaniards. We still managed to find a nice sandy spot by the sea where we basked in the sun and enjoyed the breeze. We didn’t swim as it was actually quite a cool day, but a few other people were diving in. The waves were crashing really close to the beach and clearly one person wasn’t aware of this when she came running down the beach, bay-watch style. She elegantly dove into a rolling wave and then landed in a dribble of water on the sand like a beached whale and we were absolutely dieing of laughter. Poor lass, she waited a few seconds before turning around and seeing how many people had witnessed her accident. We also had a man stand and admire the sea close to us…we wouldn’t have taken any notice of him but then Craig saw he had a huge rip in his swim shorts and a pocket had torn off showing half his butt crack to everyone behind him!! After that rather amusing afternoon we packed up and drove towards Silves as we wanted to wild camp at the reservoir again. 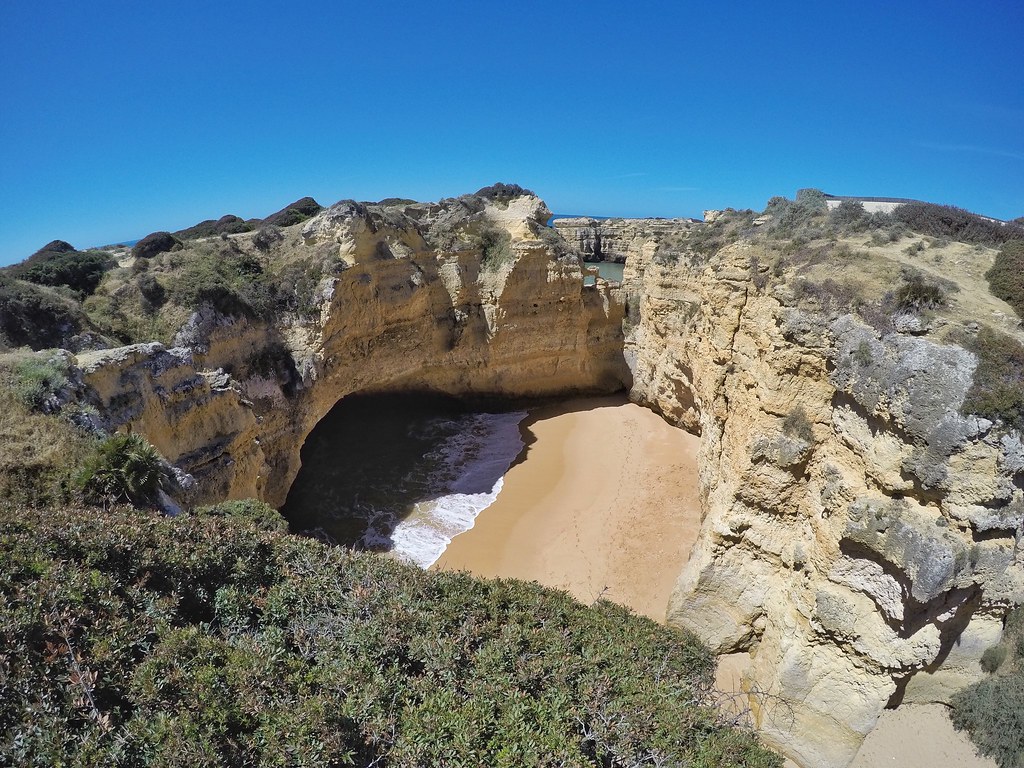 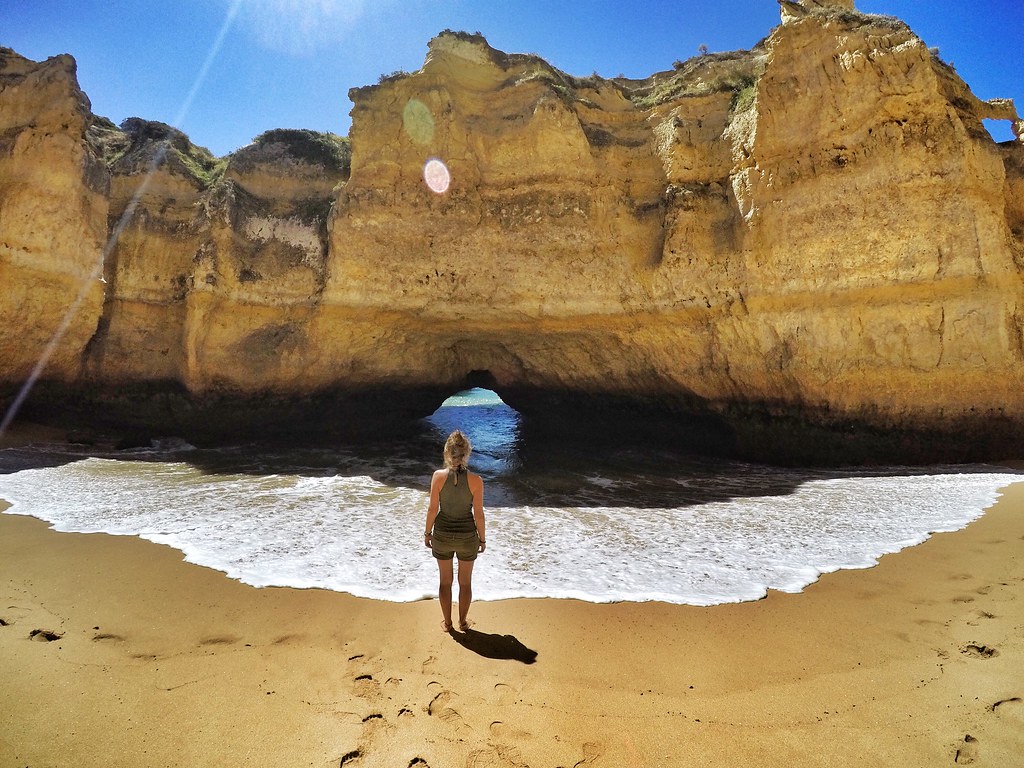 As soon as we arrived we could see two cars parked on the little peninsular where we’d camped last time so we decided to explore the other side of the lake. I really wanted to access the island, a track led down to a piece of land that almost touched the island so we were wandering if we could drive down and walk across a bit of water for a truly unique place to camp. But that plan went down the pan when the track became too narrow so we reversed before things got too overgrown. In the end we found a different little dirt road leading down to the lakeshore. There was no one else around so we decided to pitch our tent at the bottom of the road, searching desperately for a relatively flat spot. The first location we picked ended up being smack-bang in an ants nest, which we soon discovered led to the next area we wanted to pitch. So we spent a while lifting the tent up and manoeuvring it around, stepping back and trying to see how slanted it was. We had to suck up a little slant for the beautiful location though, and tonight was going to be way comfier than our previous camping trip because today, we brought along a mattress!! Hallelujah! We couldn’t believe our luck when we found that the sofa-bed mattress fitted like a glove. The small tent was filled up with a duvet and pillows and we laid our towels on the ground outside to create a little terrace to dine on. Dinner was rather pathetic to be fair as we hadn’t prepared very well so I ate two plain avocados while Craig had a pastrami selection. We enjoyed an evening dip in the refreshing lake and then watched the sun set while sipping cold beers. 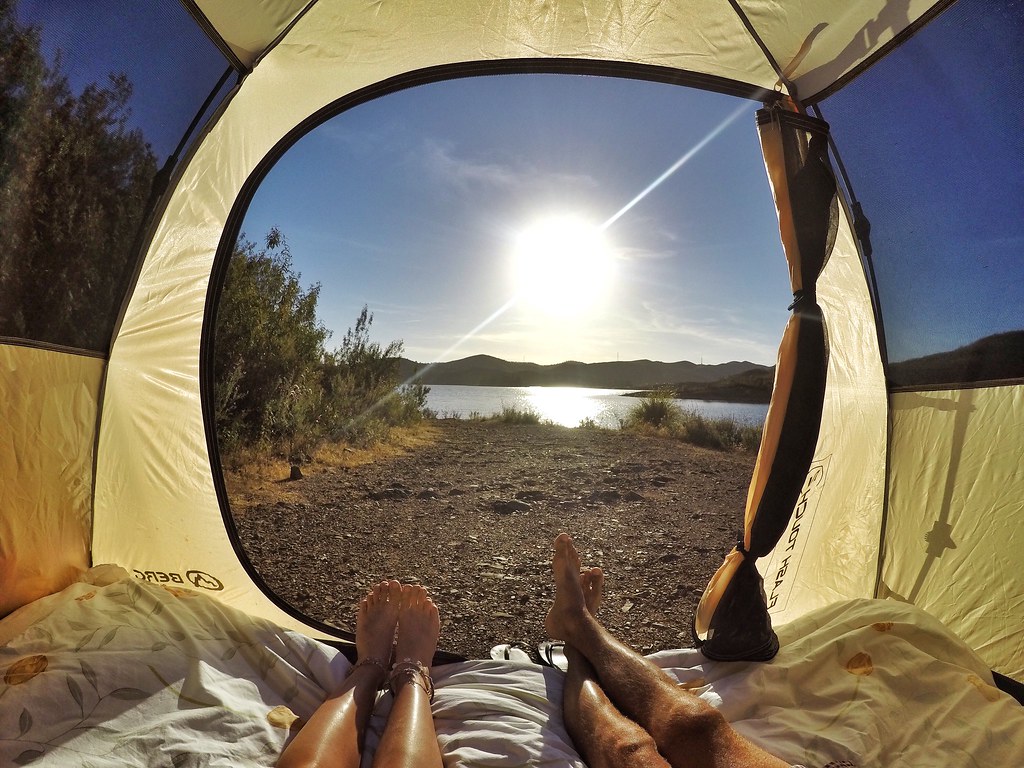 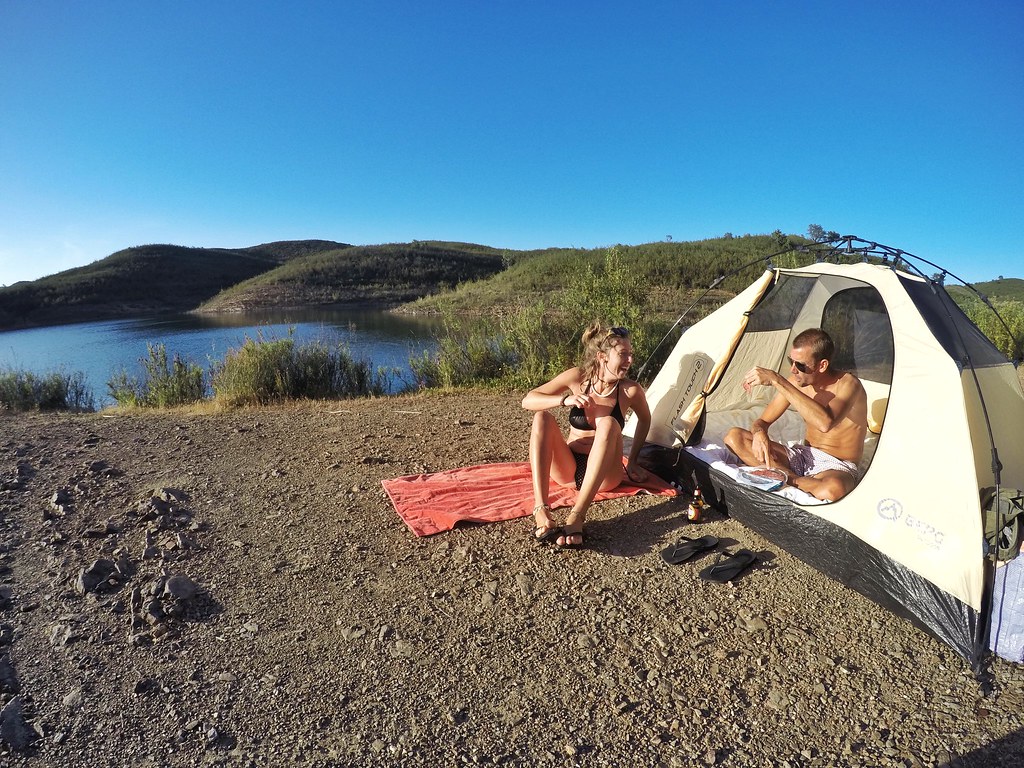 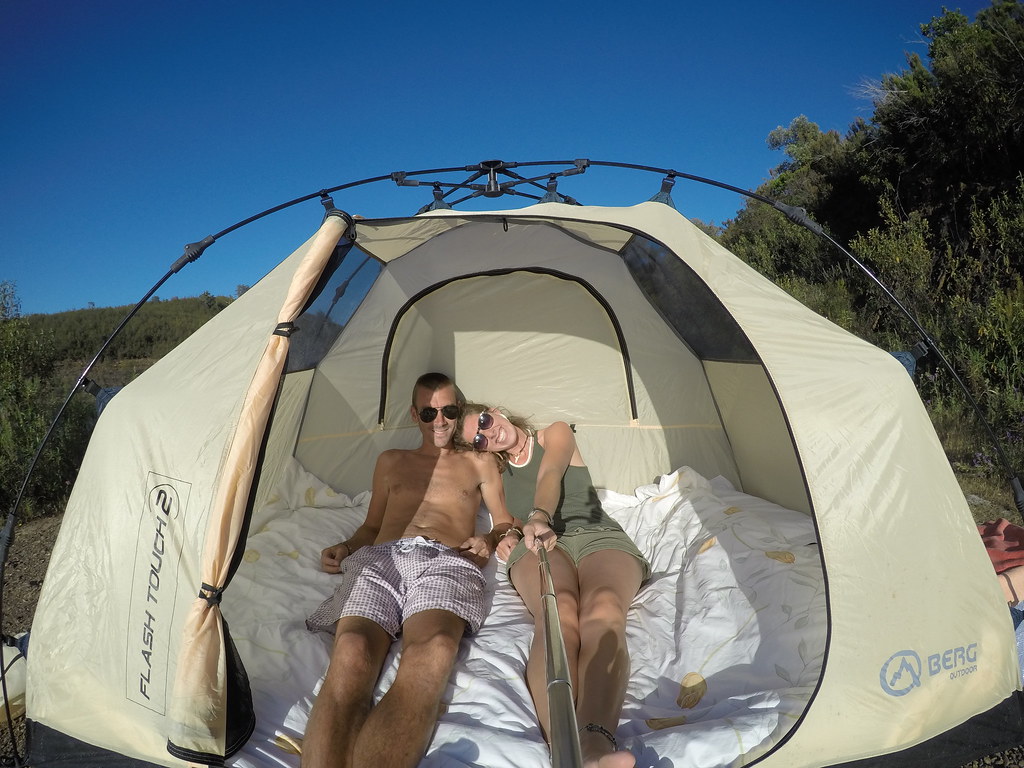 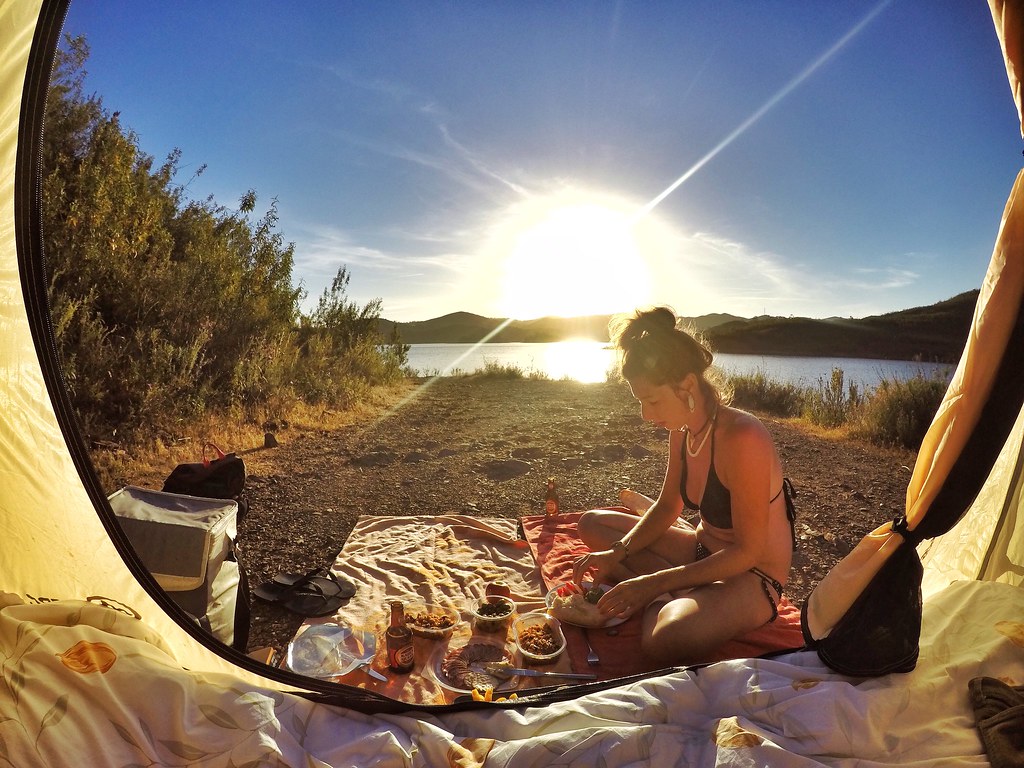 The stars were great as we stood outside brushing our teeth. The moon was rather full but it’s probably the furthest away we’ve been from light pollution in Portugal so it was quite a treat. A gentle breeze blew throughout the night, just enough to continuously shake my damp bikini hanging on the tent pole and keep us awake all night. 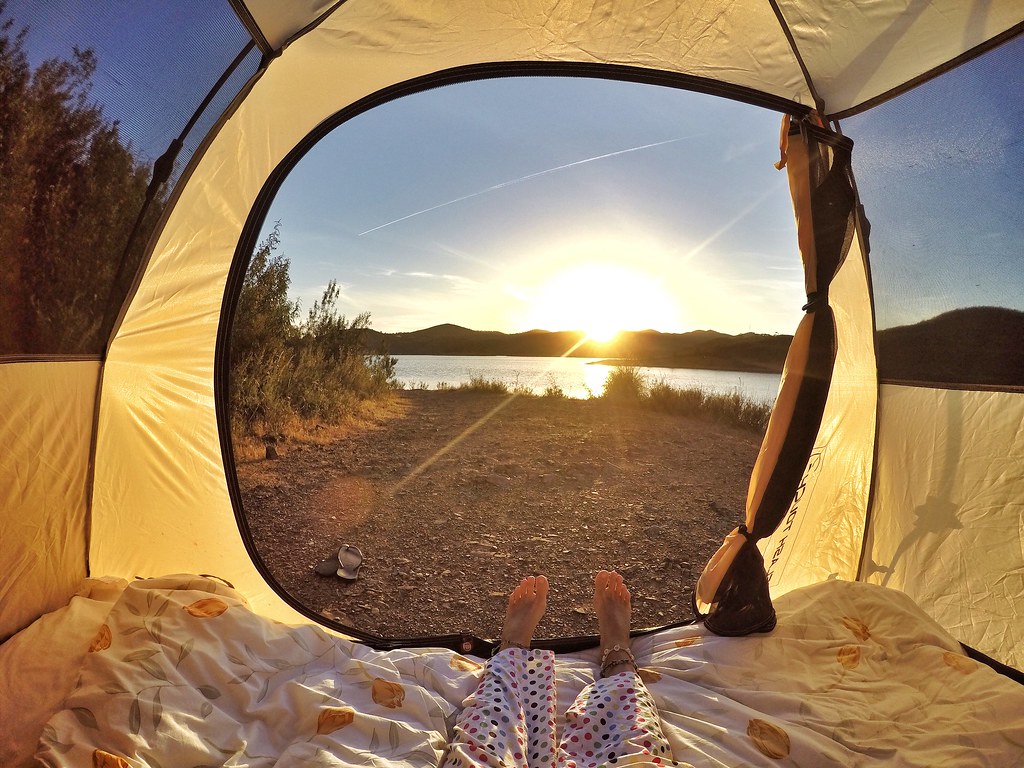 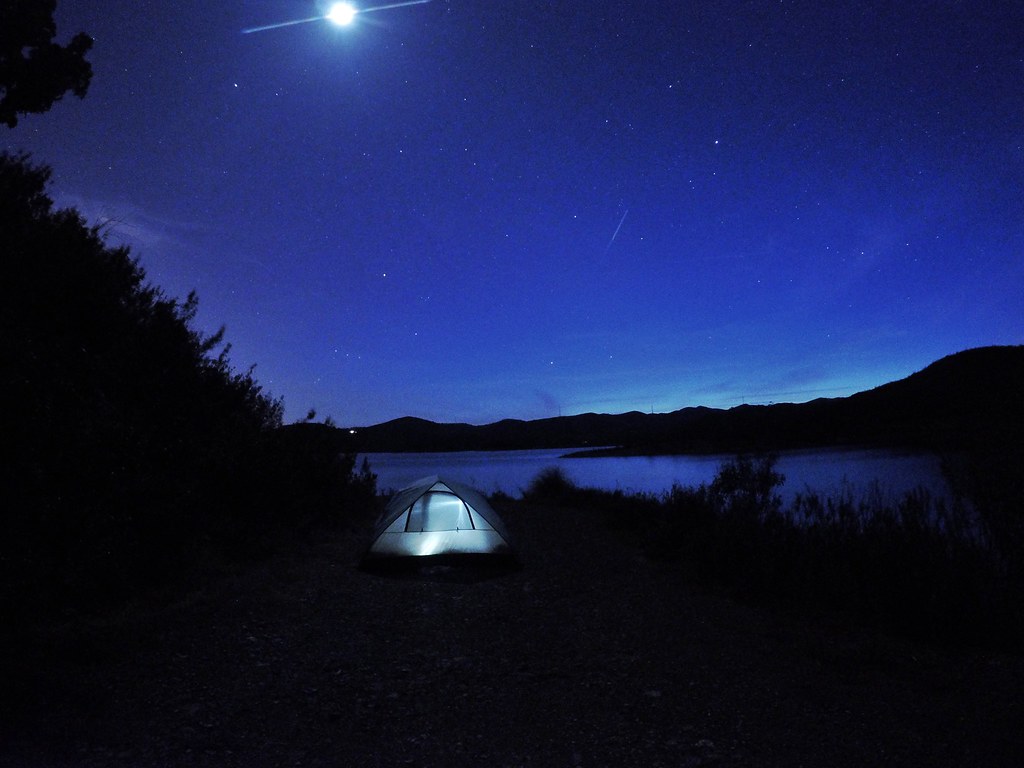 We woke up sweltering inside the tent as the sun began cooking us like we were in a slow-cooker. Boy were we happy to have a lake-side spot so we could run into the water and wash the morning sweat off. It was such a nice spot that we decided we should spend the whole day there as appose to going to the beach which would be full of people. So we dismantled the tent and moved the mattress right to the lake shore and placed our towels on top to make the worlds comfiest sun lounger. The day was filled with beach ball on land and canon balls into the lake. We decided to stop at a beach near Galé on our way back home and we had the huge expanse of sand and sea all to ourselves! We ended the day with a picnic-dinner atop a rock where we watched the setting sun fill the sky with pinks and reds – what a perfect way to end our weekend away! 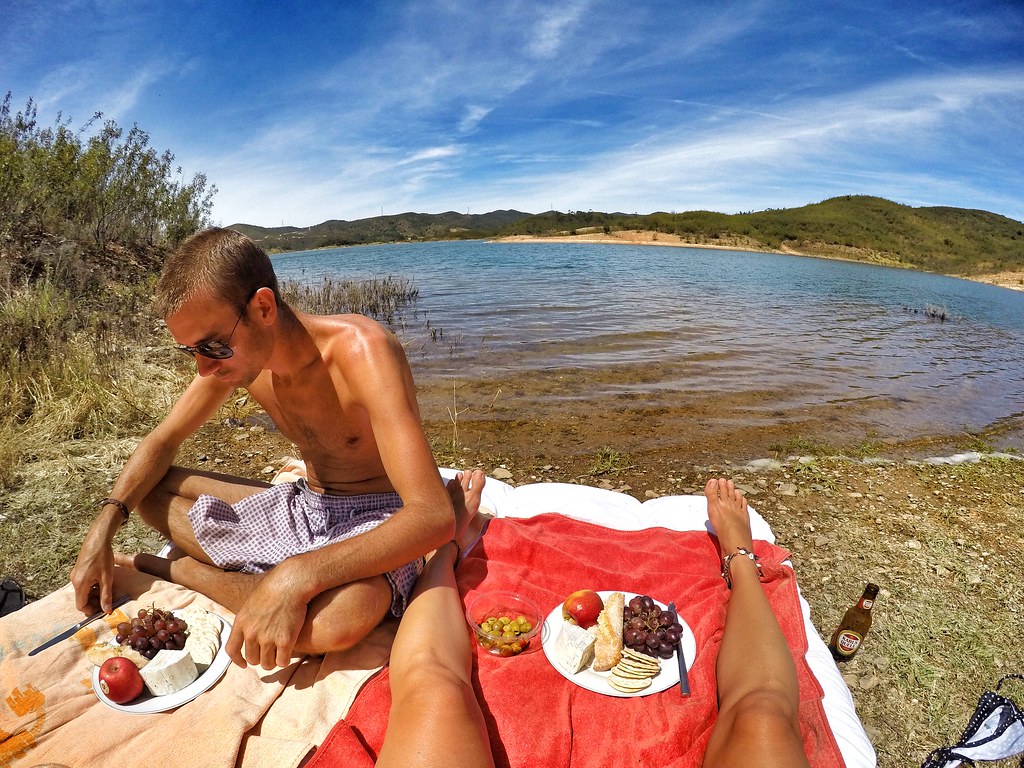 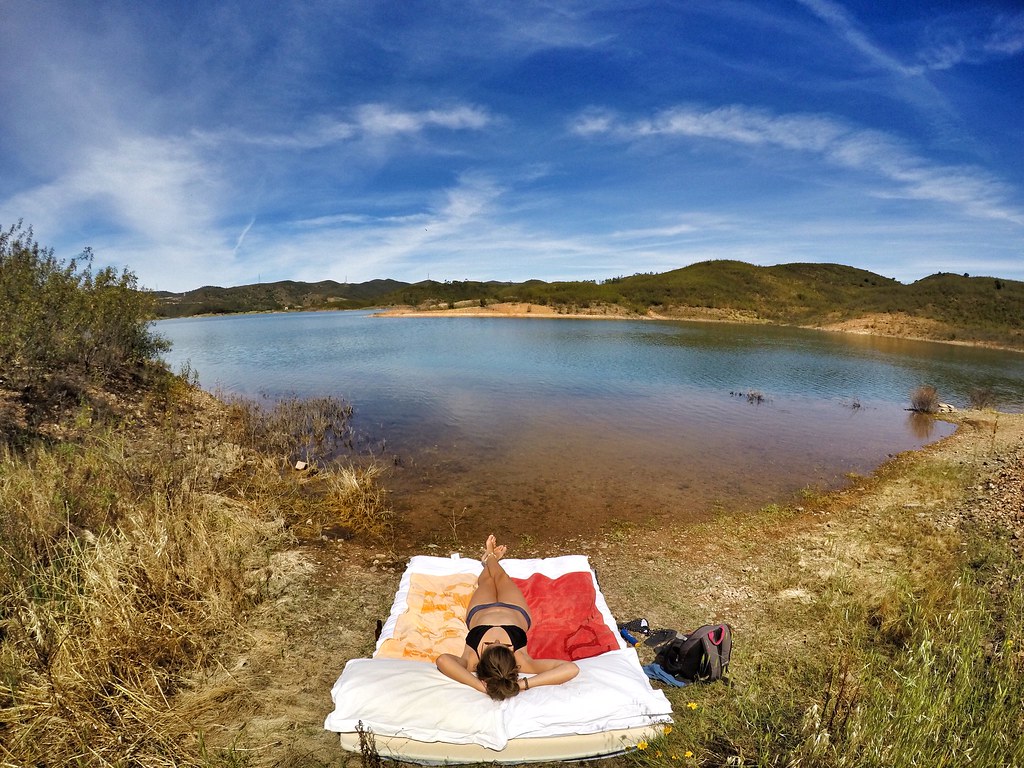 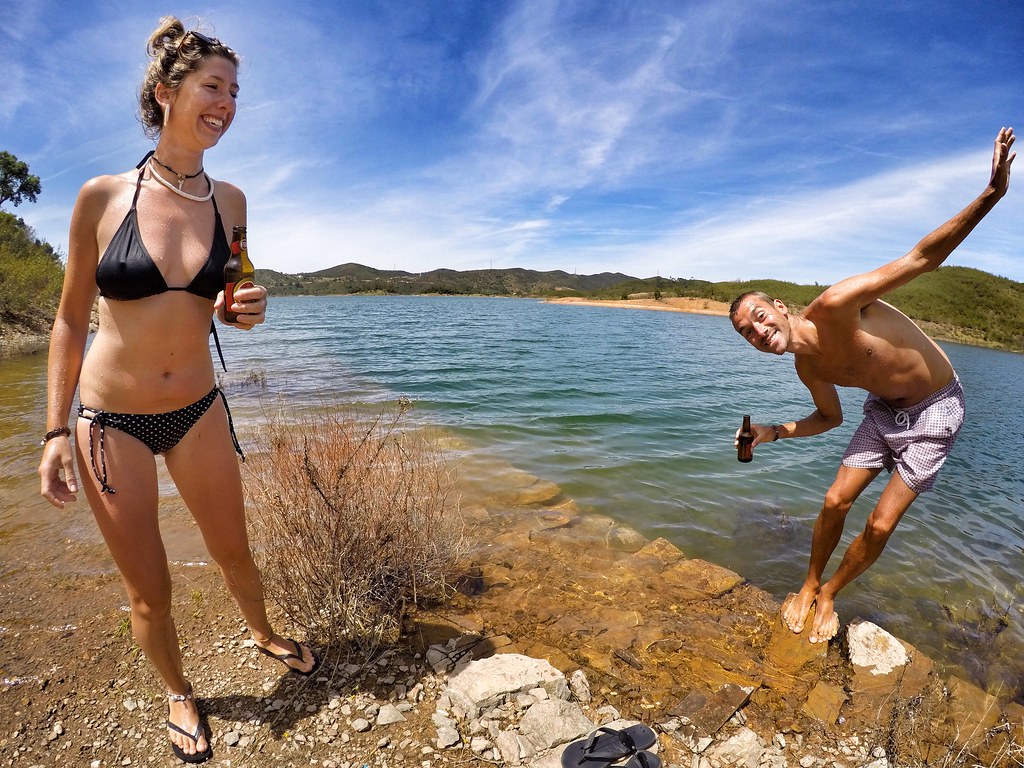 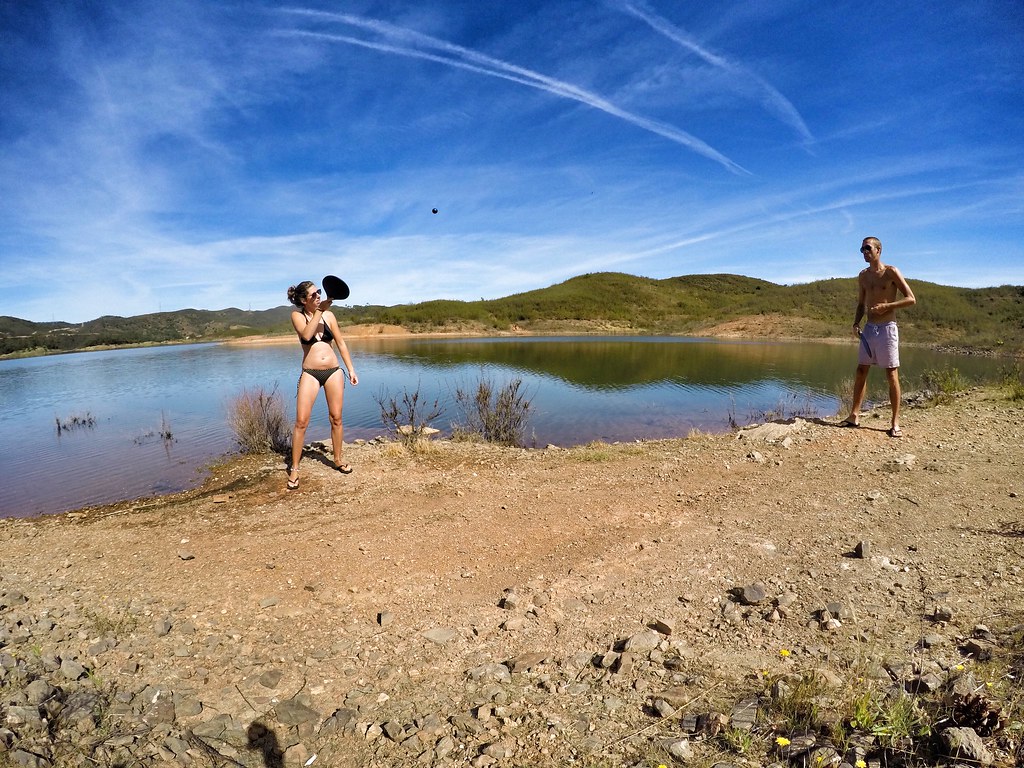 Our time volunteering in Portugal has come to an end, our travel insurance has expired and our bank balance dwindled down so we’ll be heading home to save up again. We really thought we’d have travelling out of our system by now, but we’ve had so much fun, once again, that we want to continue seeing more of the world. I think the mix of backpacking, campervanning and volunteering has had our spirits high all the time. It’s easy to lose appreciation for things if it’s a year-long road trip or exhausting backpacking all the time. We’ve really enjoyed our time volunteering here and we’re very lucky to have found a place with private accommodation, use of a car and a house full of dogs, which is just heaven for us. It wasn’t all ideal though; the pump and cistern broke for a few weeks so we had some shower issues, and once it was fixed the water had absorbed the cisterns leak-proof paint so it smelt like we were showering in white-spirit. I was half expected us to grow extra limbs like lab-rats. Craig also had an accident while climbing up a tree and chainsawing a branch down; A load of vines gave way and catapulted the branch into Craig who fell backwards (thankfully throwing the chainsaw away from him) and landed hard on the ground with his thumb bent the wrong way. Luckily it didn’t break but was badly bruised and sore. As for me, I was splattered with dog poo one day whilst strimming some long grass – at least the chemical shower removed any germs from my body! Now it’s time for us to fly home and search for a job in a restaurant so we can save for the next adventure – destination unknown. 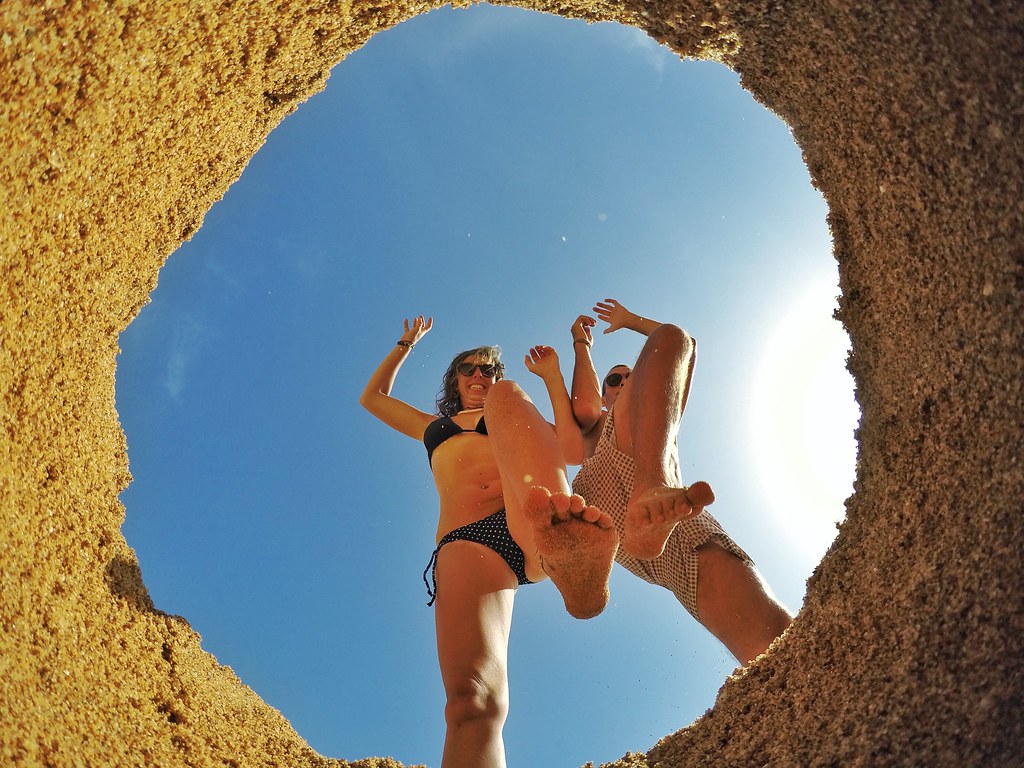 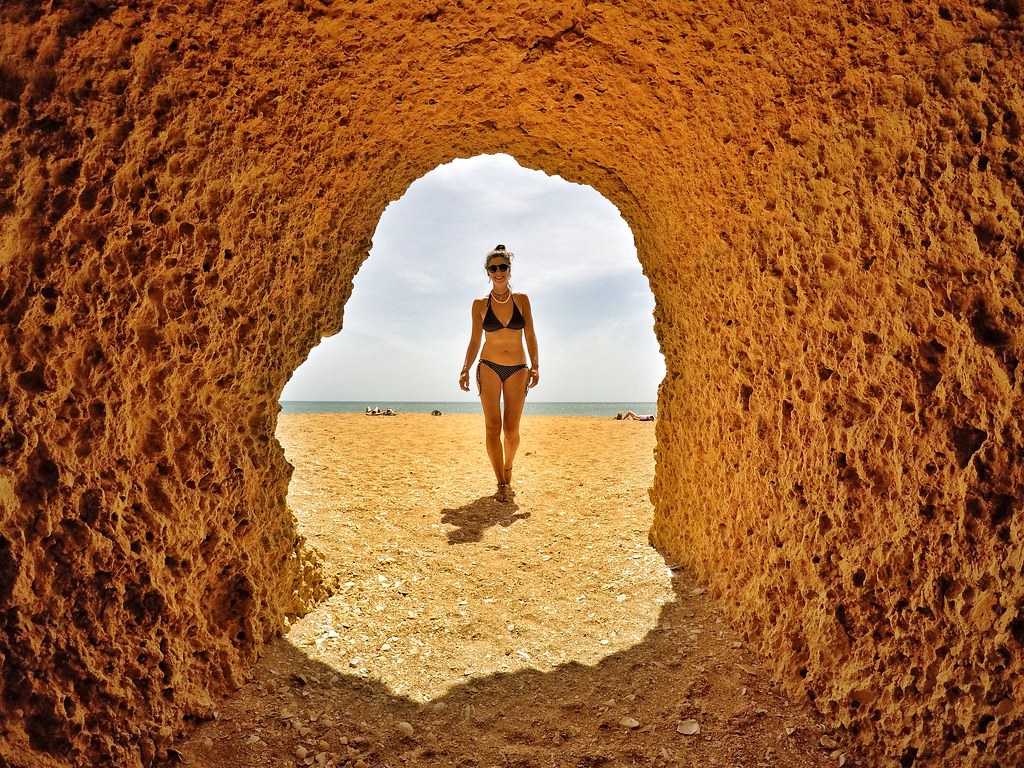 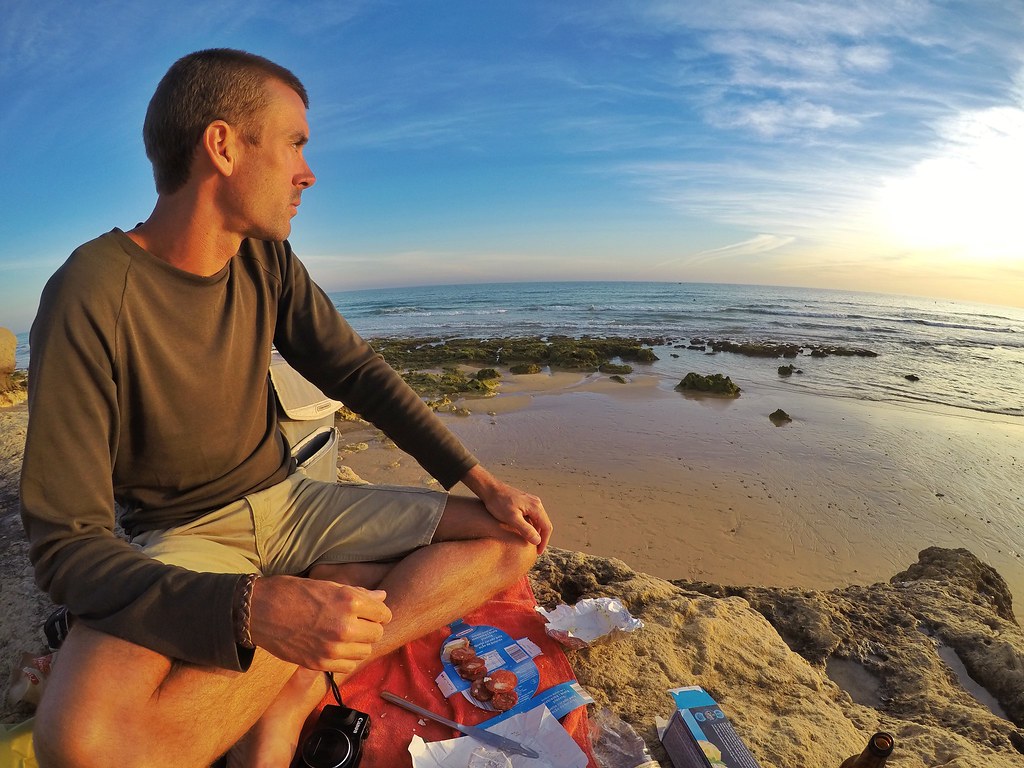 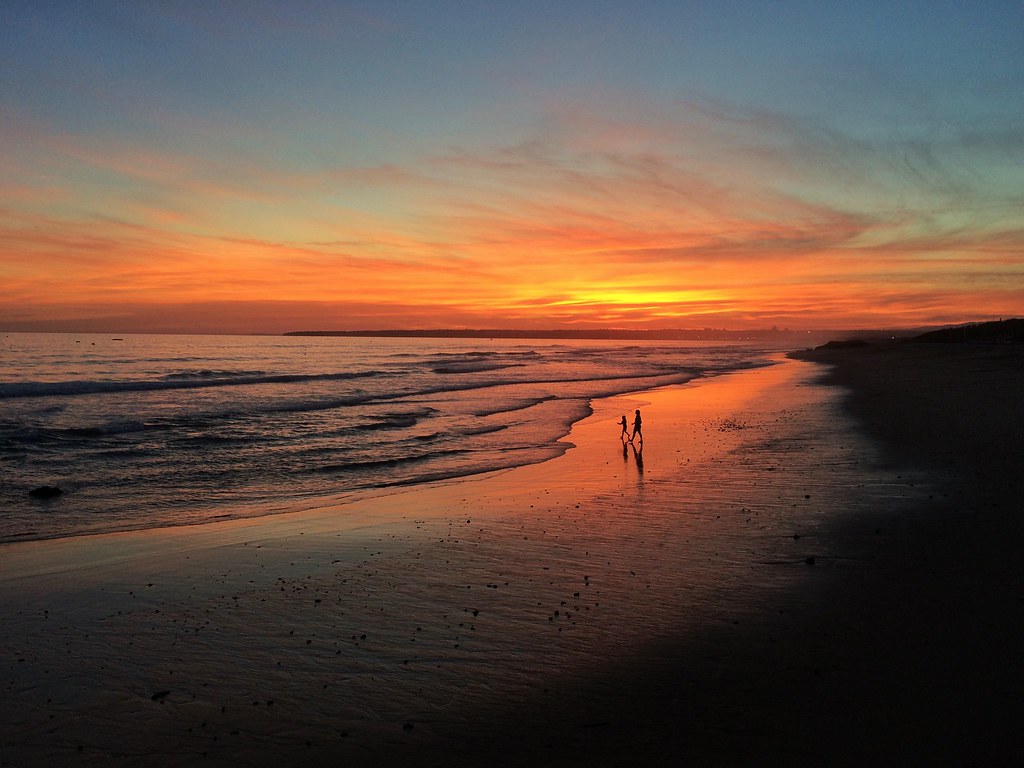