We’d seen photos of this insane hidden beach inside a cave all over the internet and if there was one thing we had to do while volunteering in Portugal it was visit Benagil cave. I did some research online and found out:

– You can get a boat ride to the cave from Benagil Beach, but they don’t allow you to get off the boat. Therefore you can’t actually explore the cave on foot, relax on the beach or take the coolest photos imaginable.

– There’s no nearby kayak rentals. Instead companies elsewhere offer tours along the coast…we hate tours so that was a no-go.

– The final option was to swim to the cave from Benagil Beach. The distance isn’t far but it all depends on the weather and sea conditions.

Even though I’m a terrible swimmer, option 3 seemed like the only one for us. Our host, Di, used to be a scuba diving instructor and spent 20 years living in the Caribbean so she’s a very strong and confident swimmer. Di suggested coming along with us, she could help pull me along and she also wanted to visit the cave after living nearby for many years and never seeing it. She organised wetsuits for us and then all we had to do was wait for good weather and a low swell. The night before we did the swim I double checked some info online and suddenly came across a couple of unnerving stories. Turns out some people had swam to the cave and the sea was too rough to swim back out, even for boats to rescue them, so they stayed in the cave all night until help came. 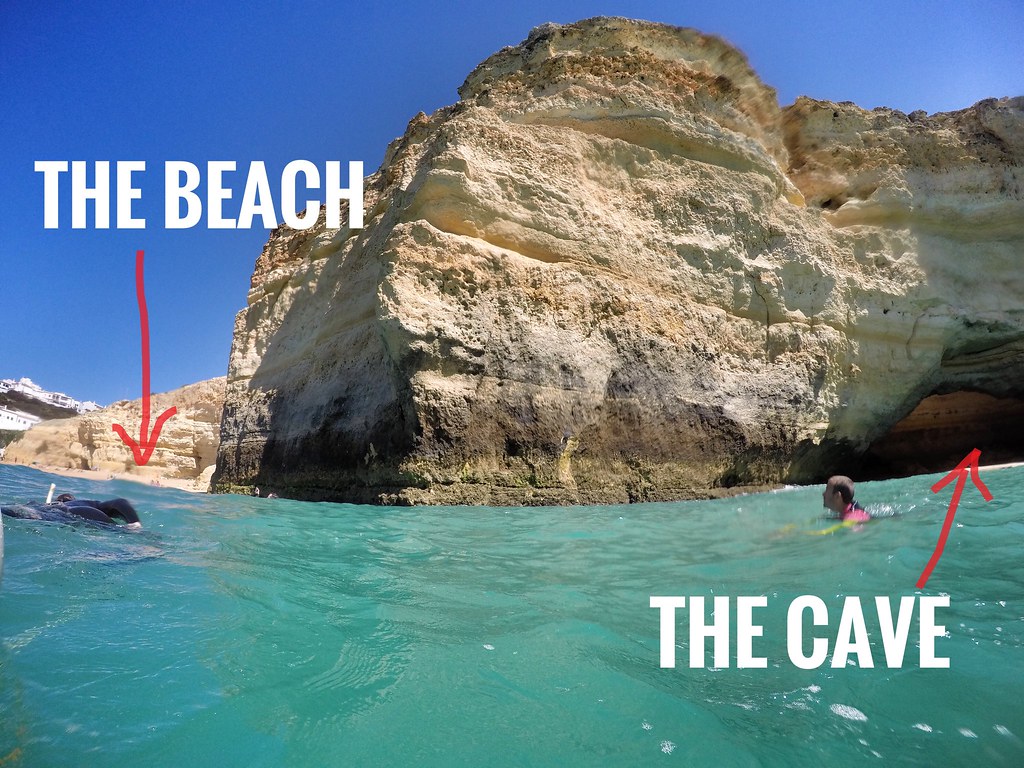 We arrived at Benagil Beach around 10.30am on a calm, May morning and began squeezing ourselves in our wetsuits. Just to clarify I can swim but I don’t like being out of my depth, I can’t tread water for long and my swimming technique tends to be an awkward doggy paddle style. Wetsuits are pretty buoyant but if I didn’t make any effort to stay afloat then I’d sink like a rock, so I also had a lifejacket AND an inflatable buoy and rope…just incase. Di ended up tying it to her waist and I held onto the rope as she pulled me along. To be fair I was kicking like mad but I really felt like we weren’t getting anywhere. There was a bit of a current which made the swimming tougher, add to that a 7mm wetsuit and pulling along a 8 stone women!! We stayed away from the cliffs incase a freak wave pushed us into them or the hidden rocks, but in the open we had to be wary of boats who frequently zipped by. 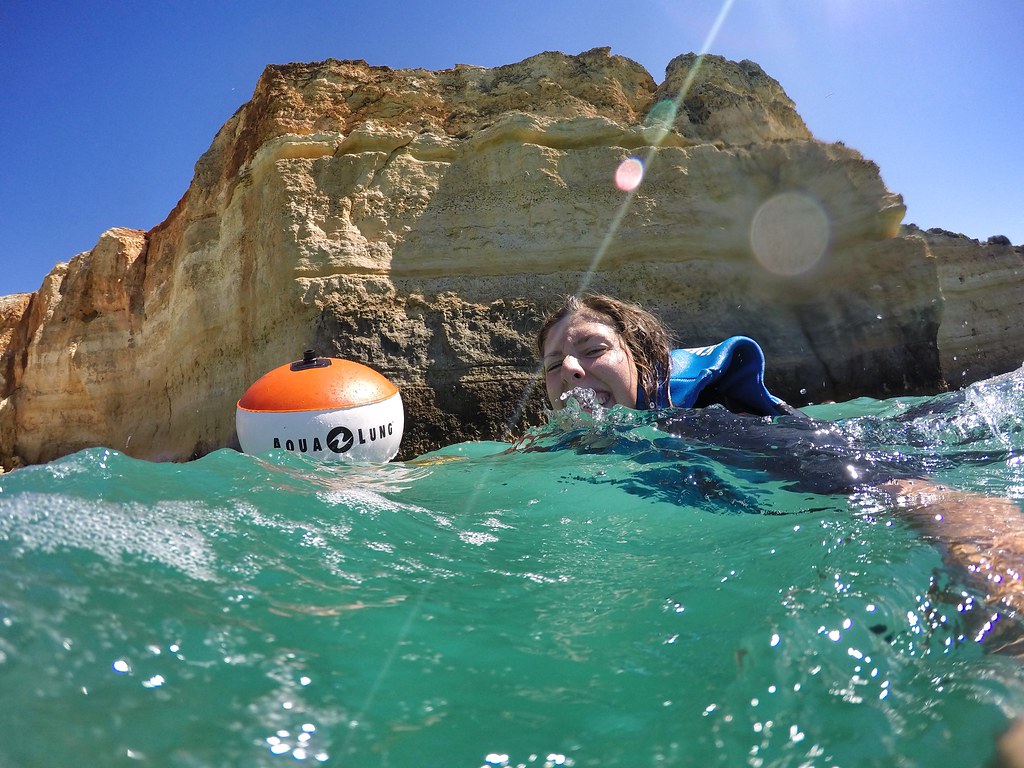 After about 5 minutes of swimming we spotted a cave which we all agreed looked pretty cool and decided we should check it out and have a break. We didn’t know how much further along Benagil Cave was but a break sounded good. It was only as we approached the arched entrance of the cave that I realised it was in fact Benagil Cave and we all began whooping and cheering. We were all laughing with joy, not only was it an incredible sight, but we had the place all to ourselves and it was much closer than we’d expected – imagine if we didn’t stop for a break and continued swimming round the bloody coast! 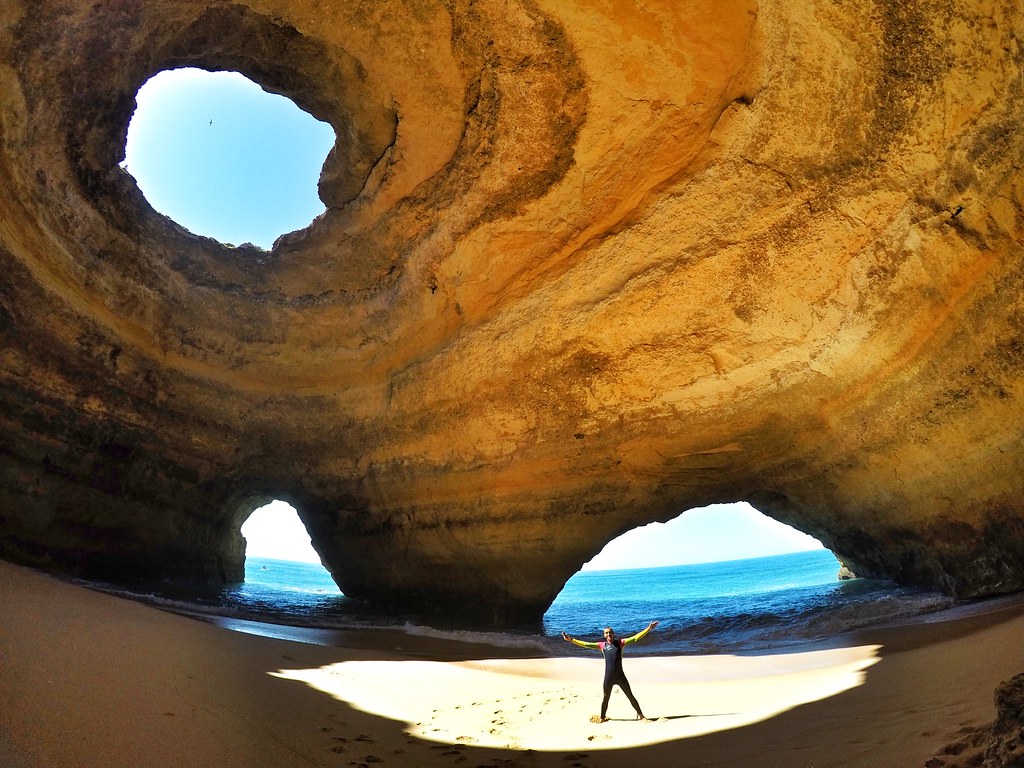 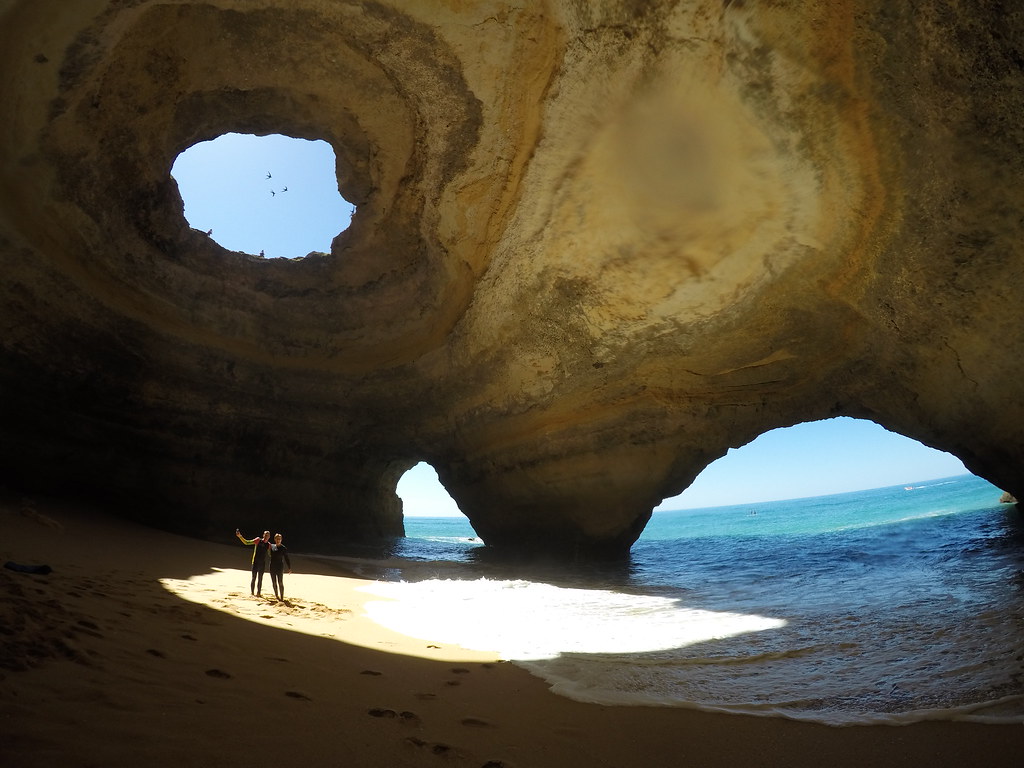 As we approached the sandy beach the waves became rather aggressive and rolled us in like beached whales. I got to my feet and started walking out the water with the buoy in my arm, only to turn around and see Di lying in the waves and me unknowingly walking her along like a dog because I forgot the buoy was tied to her waist! 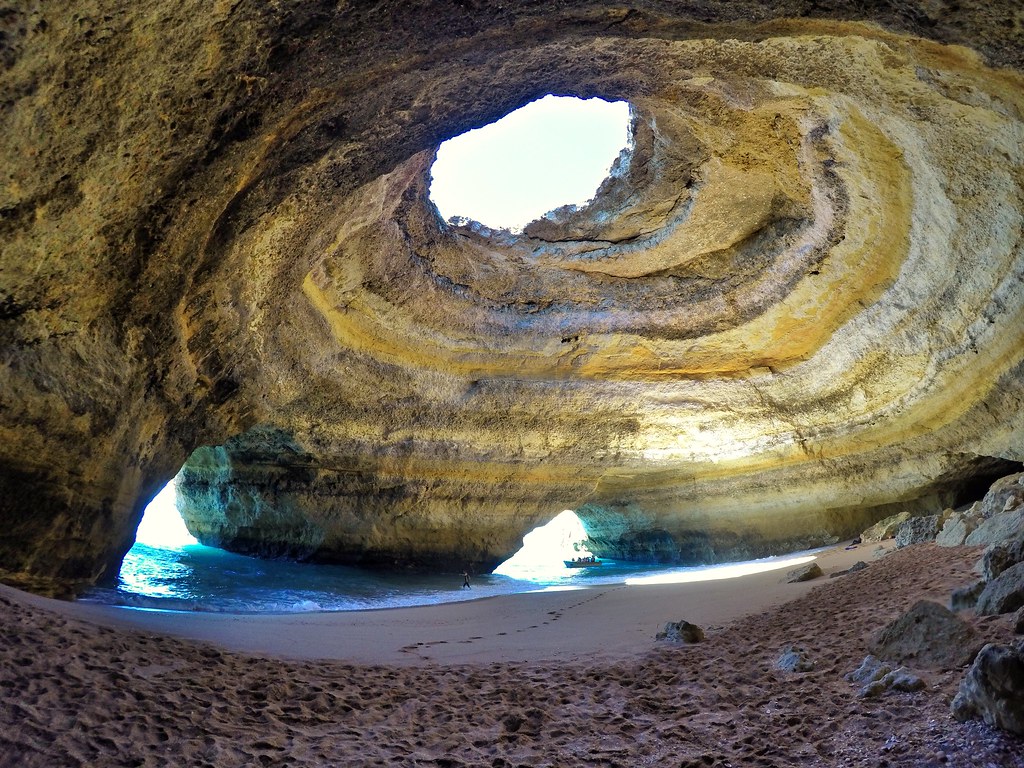 We must’ve arrived at the cave around 11am and the time was just perfect as the sun beamed a huge spotlight onto the beach from a huge hole in the ceiling. The cave was a lot bigger from the inside compared to when we previously did a walk along the coast and looked down the hole. In fact when we looked down the hole we were rather unimpressed and reconsidered whether it was worth the effort of swimming to…it definitely was though! As well as the hole in the ceiling, there were also two arched entrance ways and a second sort of cave at the rear. The back cave was quite dark and the top curved up and looked imminent that it too would fall through one day and make Benagil cave even more unique. 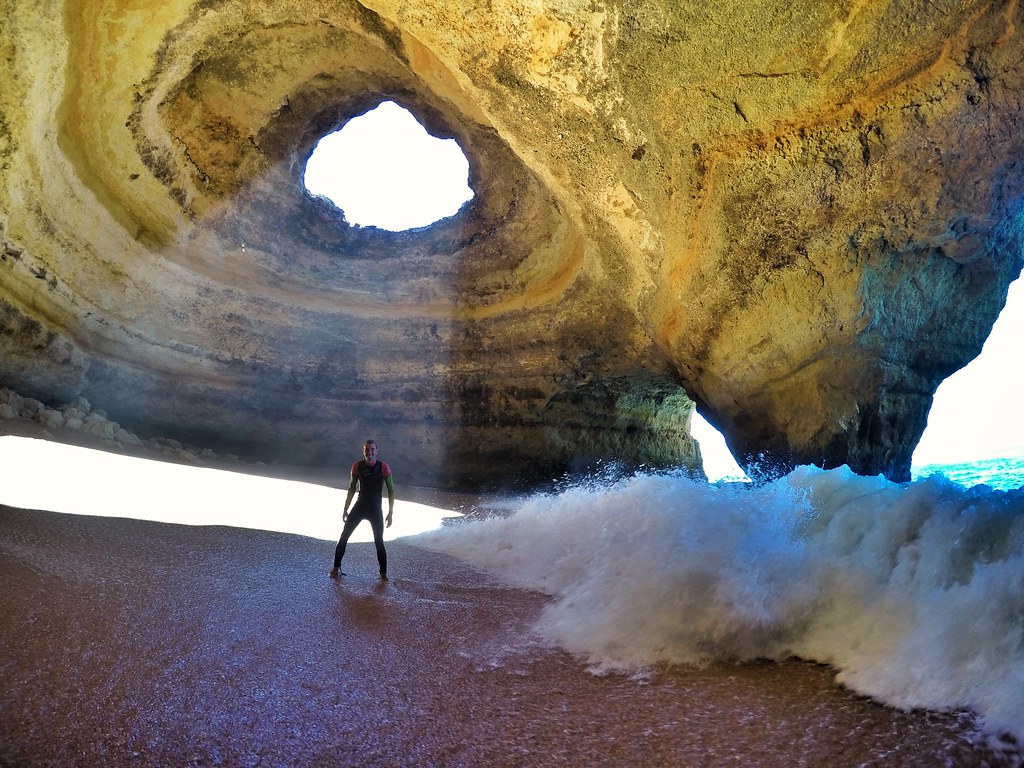 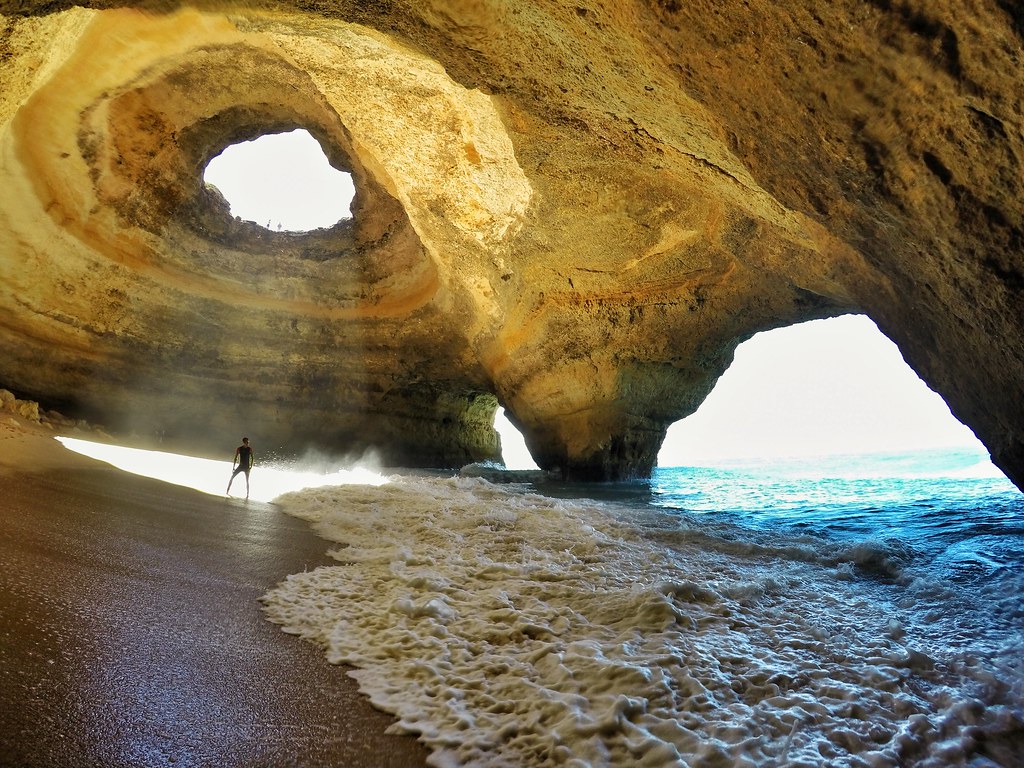 We spent a while taking photos and gawping at the amazing sight. People looked down and waved at us from the hole in the ceiling, they looked so tiny from where we stood. Some resident birds also seemed fond of the cave and were swooping through like it was a fun obstacle course. 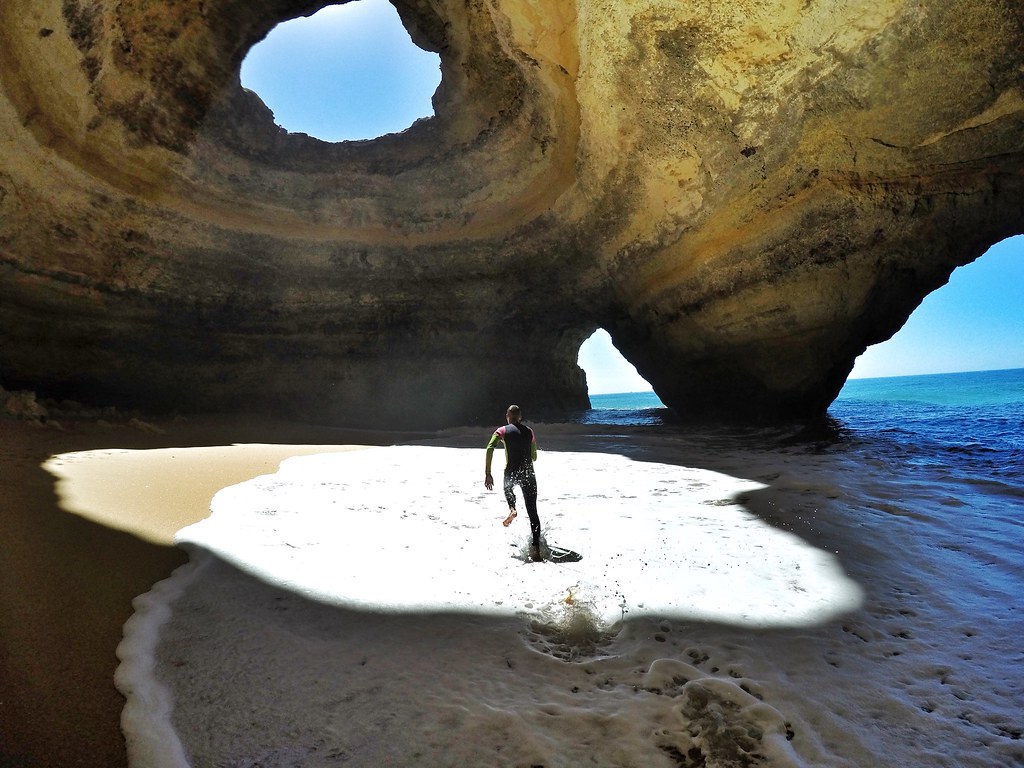 We didn’t have this little spot of paradise to ourselves the whole time though, soon enough a boat came in and I was so glad we opted to swim. The boat barely entered the cave before it was reversing back out! We were also joined by a guy who swam in just his swim-shorts and made us feel rather over prepared in our wetsuits and buoy! Five minutes later a women began swimming into the cave and then the guy went out to meet her and it became evident that they were a couple and he’d pretty much left her behind! She was exhausted when she arrived at the beach after the swim and being rolled over by the waves. Infact the sea got a lot rougher while we were there and the waves were breaking really close to the shore, causing a huge area of foamy white wash to spill up the beach. 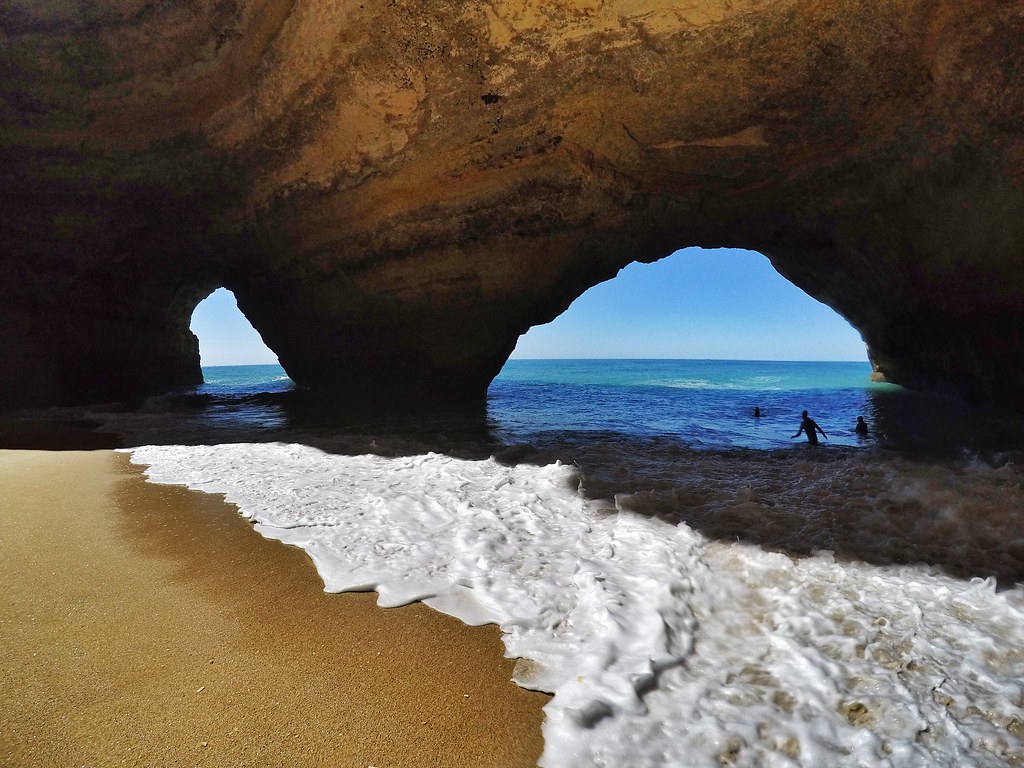 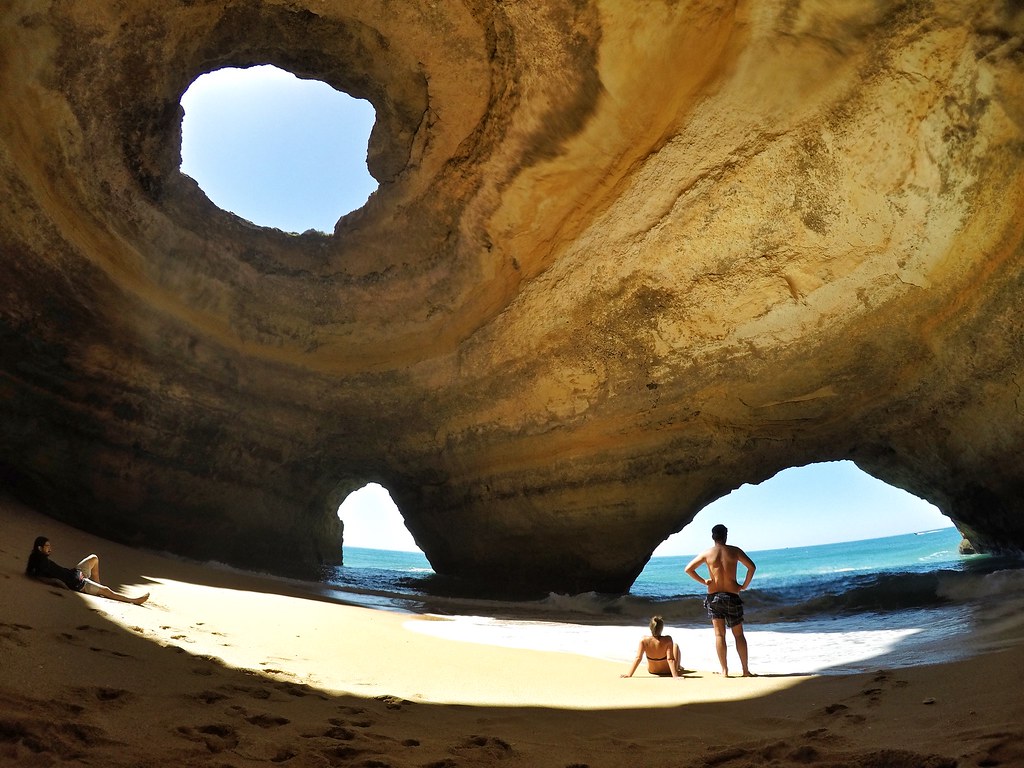 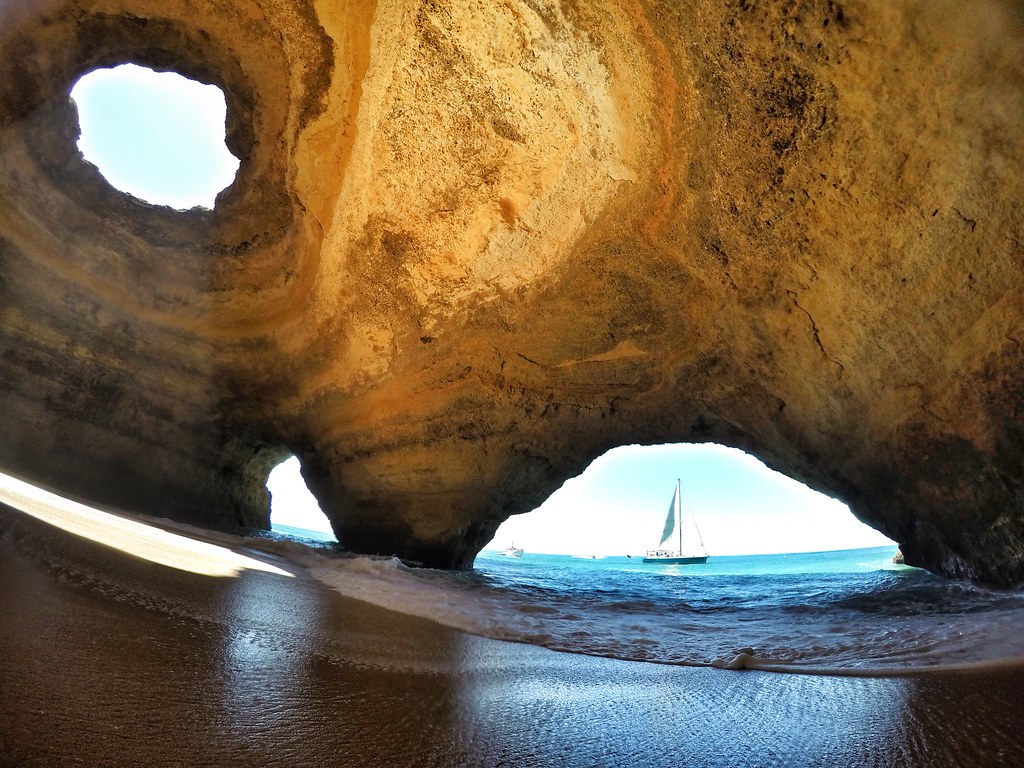 More boats arrived as we were leaving but by this point they weren’t even entering the cave and just peaked in from the outside. We decided to head back which turned out to be a bit of a challenge. Craig found a lull in the waves whereas Di and I ended up getting rolled over and spun around like a wash-cycle. Then Di lost a flipper in a wave so we were searching every wave that came in until Craig found it almost washed right outside of the cave. There were three people swimming in as we headed out so it’s obviously quite a common thing to do. 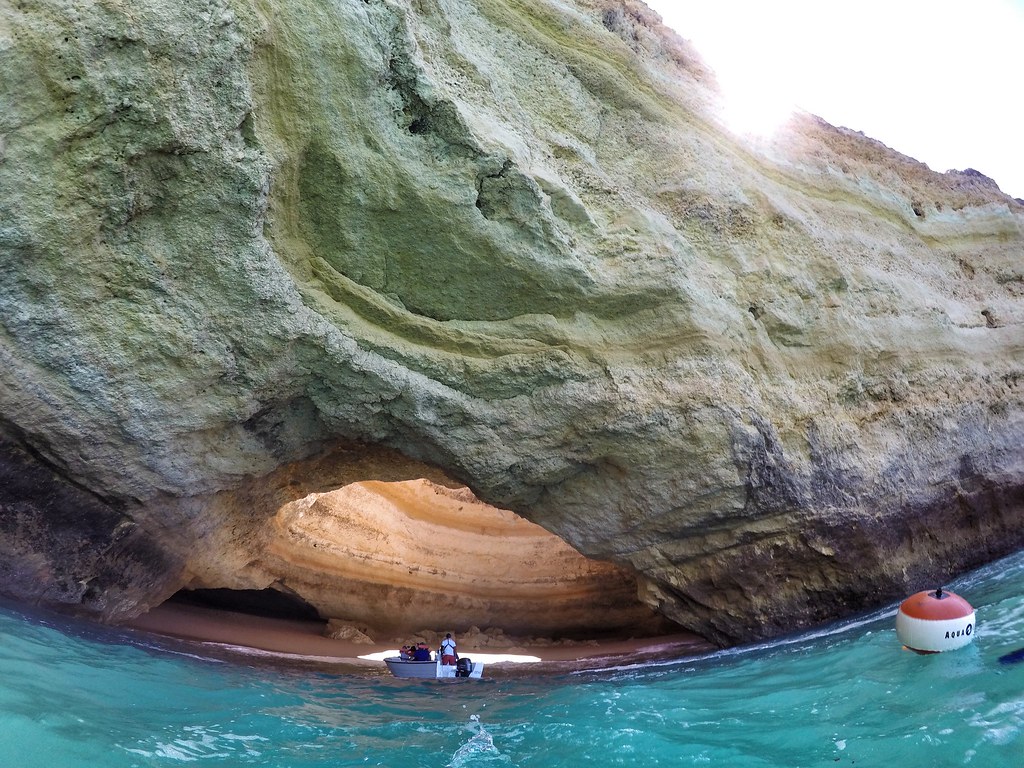 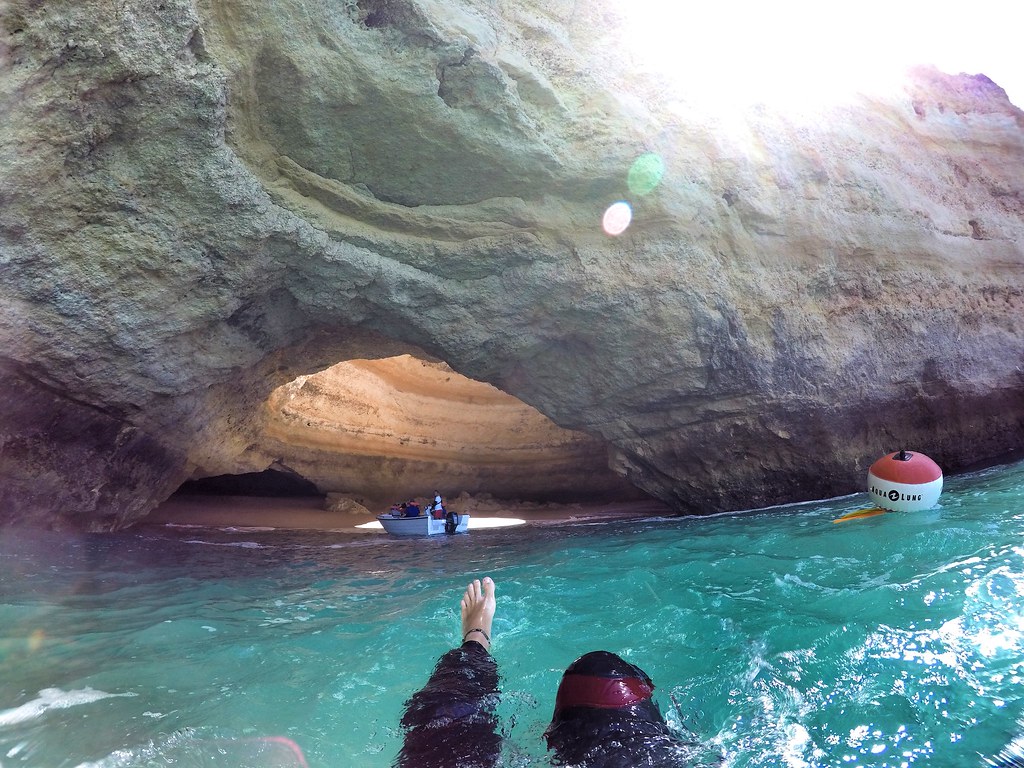 Benagil beach was a lot busier on our return and I felt like a right twit as a 27 year old being pulled along by a 50 year old! I was still kicking like mad but Di had so much power with her flippers on. What an amazing adventure it was though! It really wasn’t a long swim, maybe 10 minutes. But I would recommend taking something that floats, a boogie board or rubber tube just incase – it’s the open sea and a lot of people haven’t swam in those conditions before. I’d also only do it in good conditions, apparently a lot of the people who got trapped in the cave had swam because the sea was too rough for the boats to go out! I also think it’s easier swimming than kayaking or paddle boarding, because the waves were pretty violent and if you timed it wrong you could easily capsize. So happy we made it there though, it was definitely the highlight of Portugal for us. 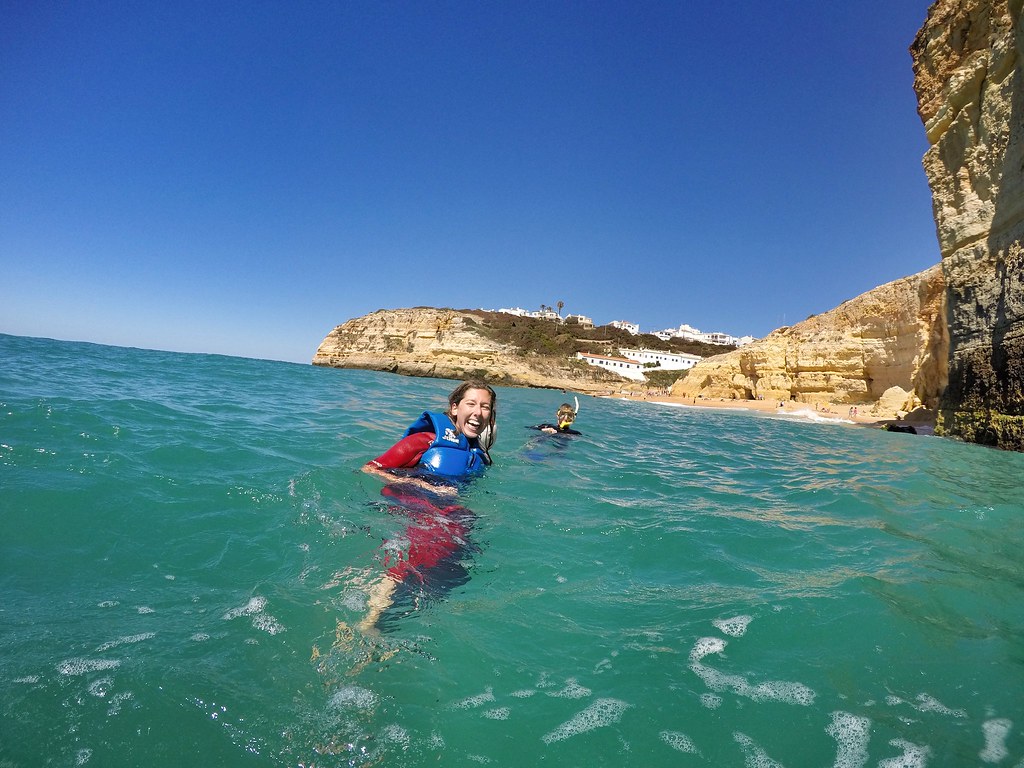