We filled the Land Rover with camping gear as if we were going away for two weeks as appose to the two days we had planned. Our hosts sorted out a tent for us to borrow and we stocked up the cool box with beers, cheese and snacks for our days off. It was a bit of an anticlimactic start to the day when we decided to head to the little village of Alte. Our satnav took us the most convoluted route through the insanely narrow and sharp cornered lanes until we ended up at The Fontes, a fresh-water Spring. It looked great on google with clear water to jump into, but we stood in disappointment at the 2 inches of water flowing over a ground of fluorescent algae. So we took to the narrow streets again and drove east to Rocha De Pena, a 479m high mountain. A trail led up to the top and it didn’t take long for us to start breaking out a sweat in the heat. It was March and already hot enough for me without a farts wind. After coming from the Atlas Mountains in Morocco the scenery was a little bland and unimpressive for us and the heat stifling. We had lunch on an uncomfortable rock and then decided to screw the area and plow west to Silves, a sleepy town with a castle propped atop the hill. Most of the shops were closed when we visited but we had a little walk around the cobbled streets before ending a rather uninteresting day at Barragem Do Arade, a reservoir north of Silves. 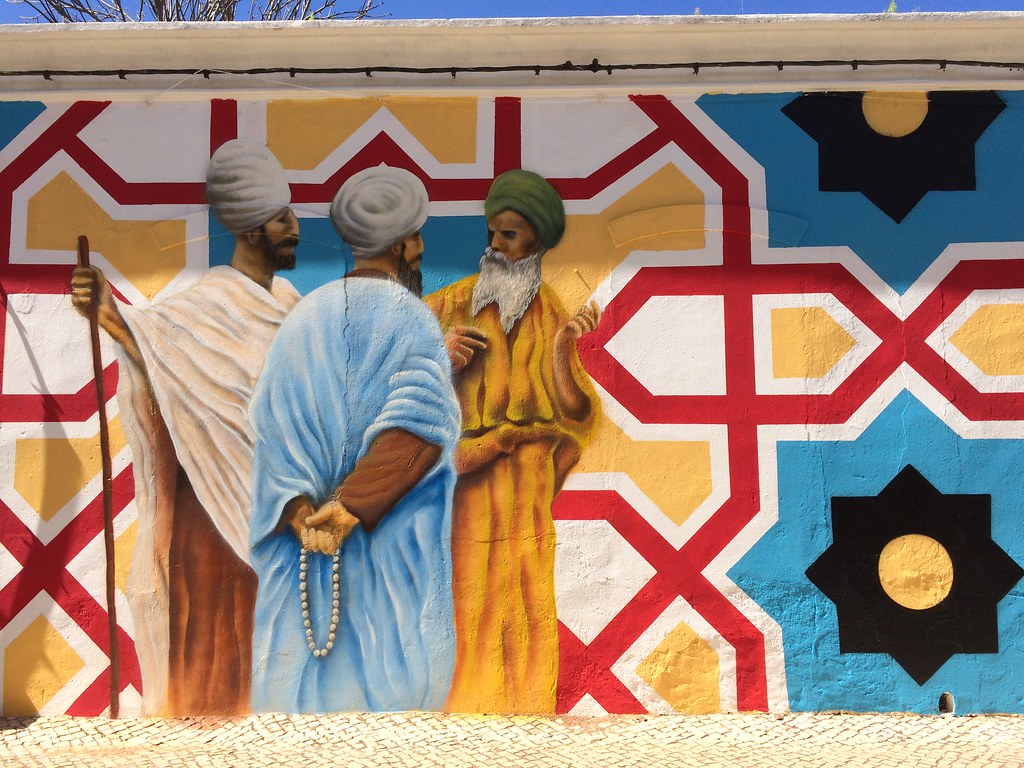 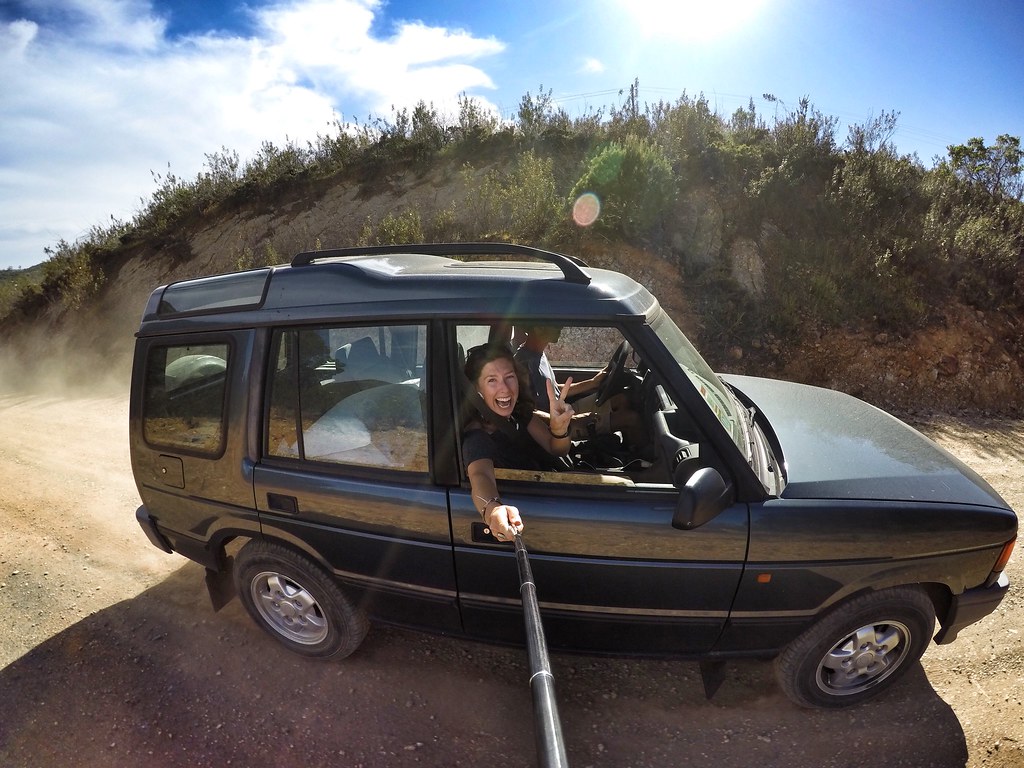 With the lack of sights we’d had today we weren’t expecting much of the lake, but we were pleasantly surprised when a road led us above the concrete dam. The lake was gorgeous; blue with curvy edges, a little forested island and lush green hills surrounding it. Our plan was to camp by the lake and it seemed Portugal was rather kind to free campers as two little parking areas were filled with motorhomes. We wanted to escape the car parks and find our own secluded area to camp so we followed a dirt track that wound its way high above the lake. 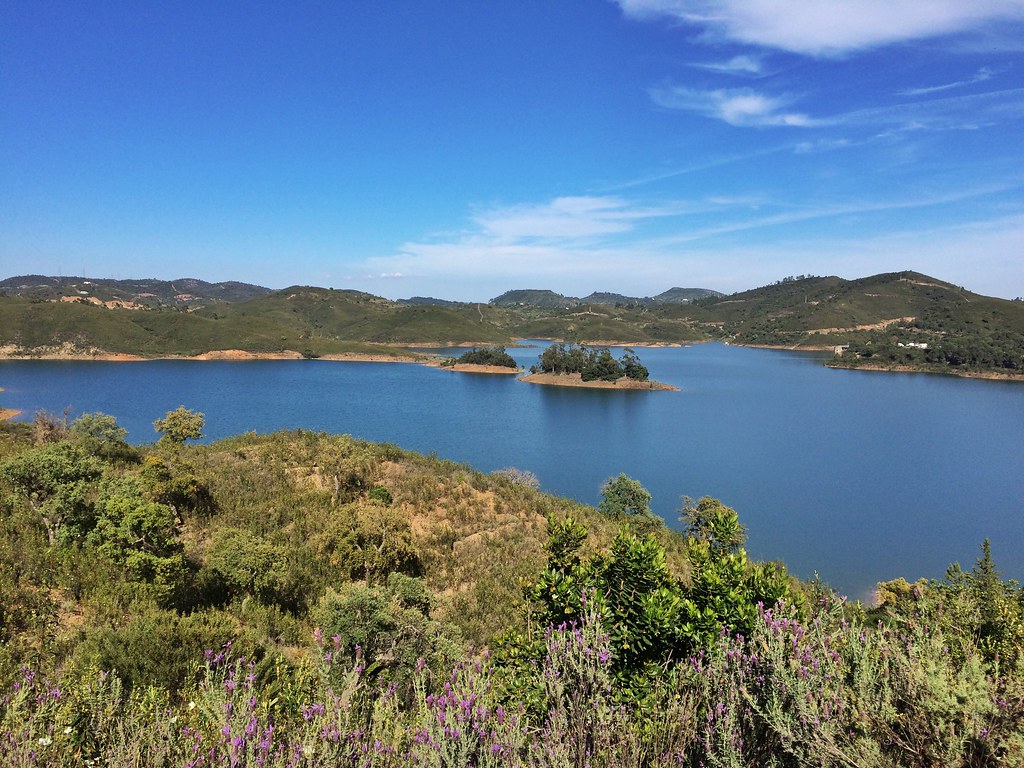 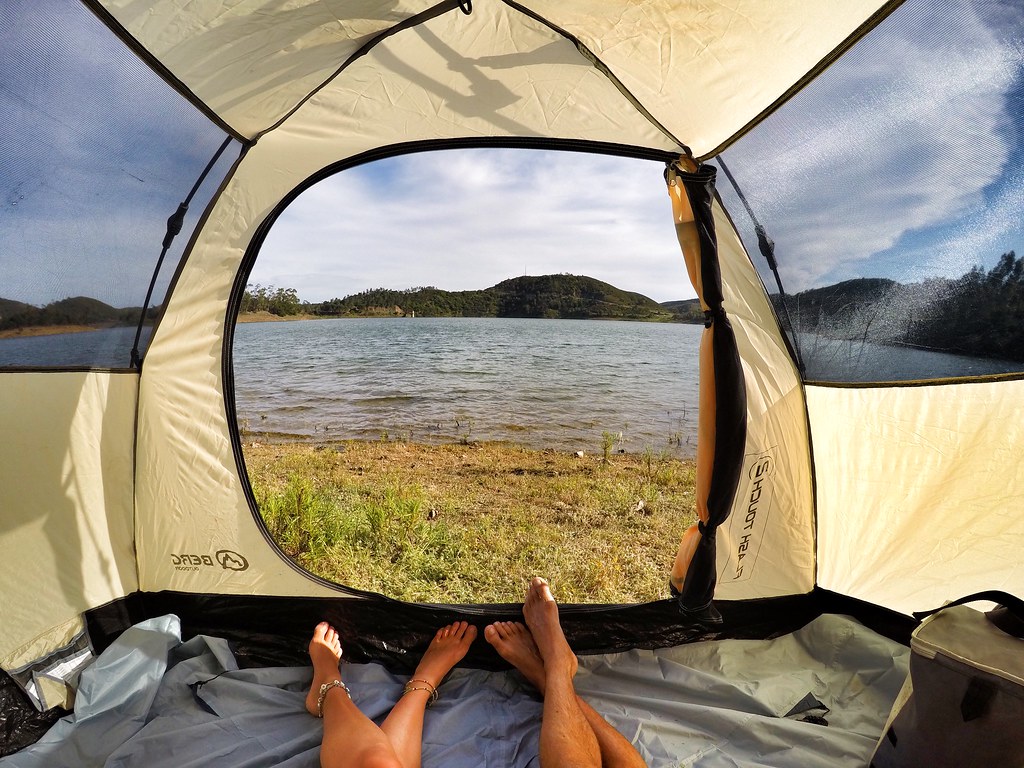 Our dirt track quickly narrowed with the bushes encroaching on us and cracks and potholes causing extra hazards. We took it slow though and were so grateful to have a 4×4 which enabled us to access an area of the lake totally untouched by the big motorhomes. The road came to an end in a forested area and we wandered down to the lake shore. The ground was rather slanted but the location was stunning so we agreed to pitch up right by the lake. The tent we were borrowing clearly hadn’t been used in a while as the zip was totally jammed and covered in a salty crust. Thankfully, I’m a genius, and I threw a handful of lake water (a couple of drops by the time I reached the tent) onto the zip and it slowly eased up. Instead of sleeping bags we had a couple of plush duvets and felt like rather posh campers. 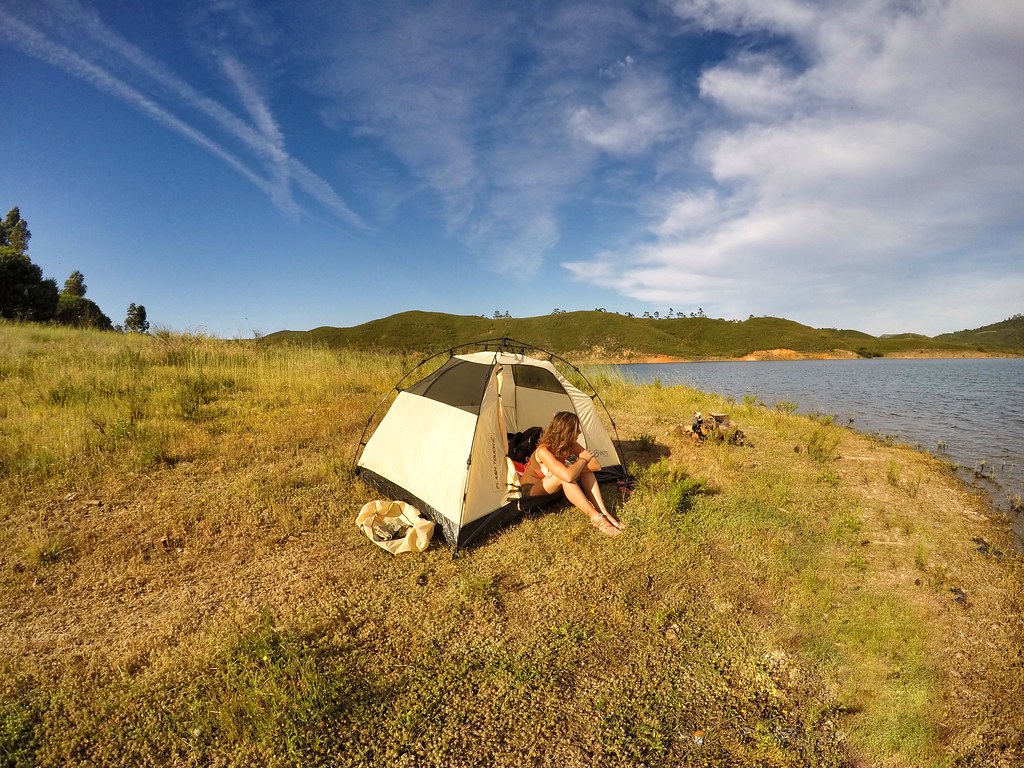 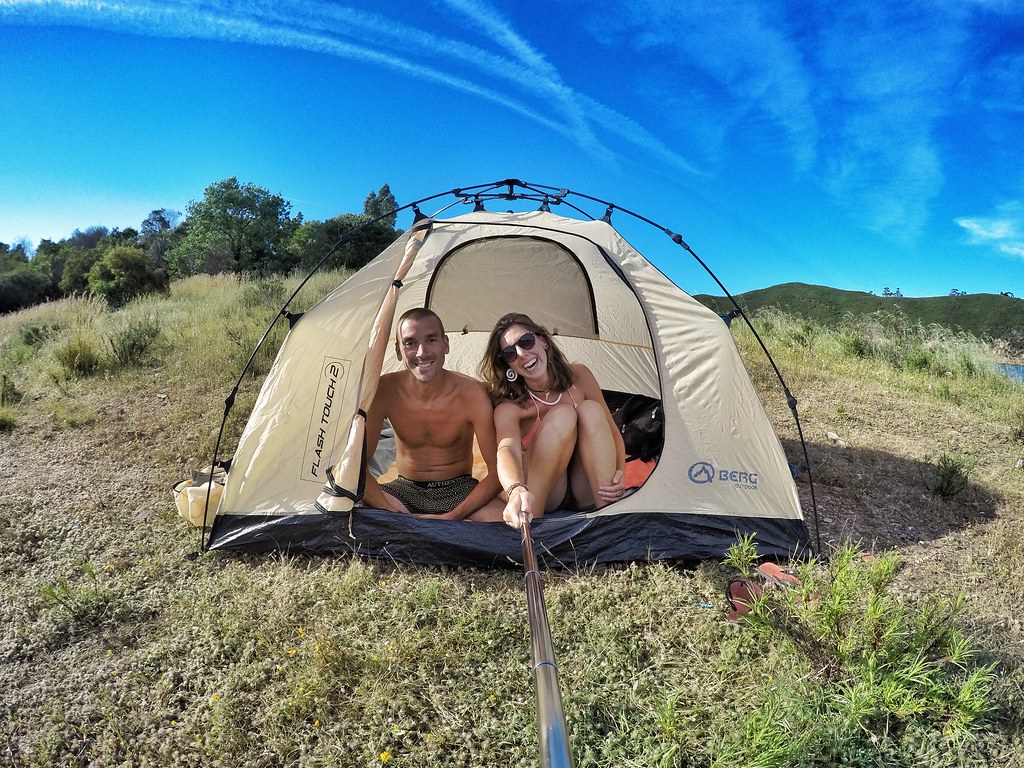 It was still warm outside at 6pm so we ran into the lake for a refreshing dip. There were a few creepy weeds that occasionally brushed past my legs but I was happy that the water was clear and actually warmer than the pool at the house where we volunteer. We put our beach towels on the ground and enjoyed some beers and dinner while watching the sun set. The few clouds in the sky soon began to look like cotton candy and the lake settled in a glassy surface. 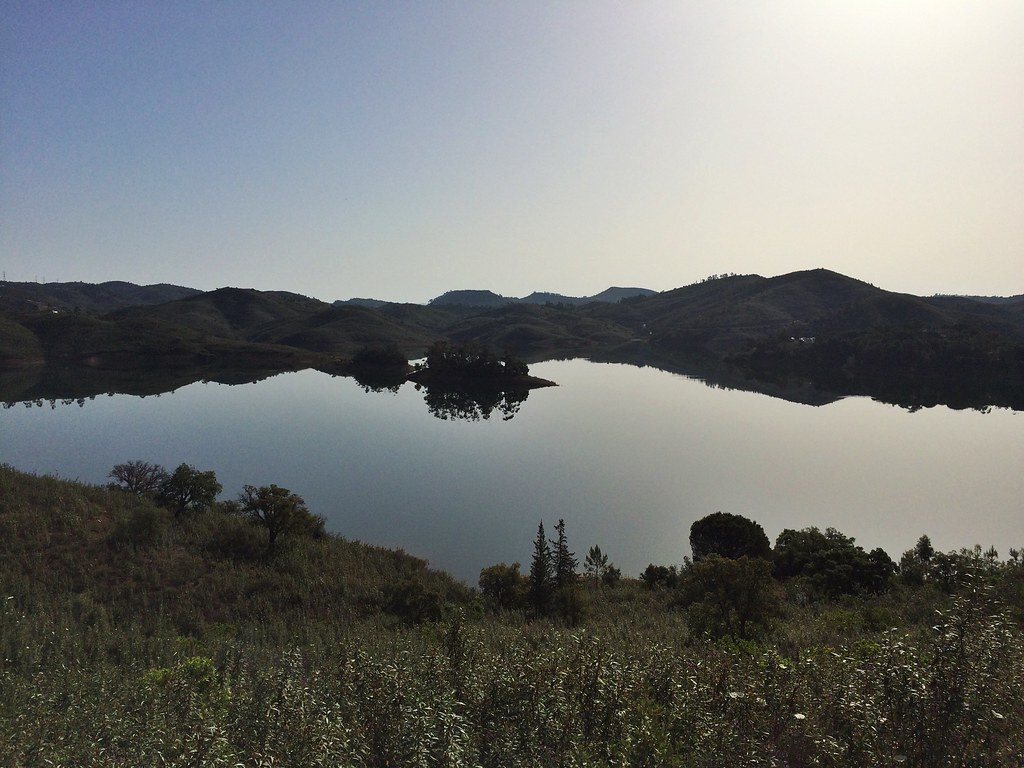 In true tenting style we slept horrendously. The slanted ground and protruding rocks in our backs made for a very uncomfortable and sleepless night but at least we woke up to a beautiful morning. The sun was up, the lake was flat and the hills were reflected in the water. As we exited the tent and began organising our stuff Craig squealed like a little girl because a rather large spider was on our tent bag. We spent a while trying to use a pole to lift the bag and shake the spider off, until the damn thing just vanished. After a morning swim and some breakfast we left our wonderful little camp location – what a treat camping for free in such an amazing location! I hope any future campers continue to respect the area and leave nothing but footprints. 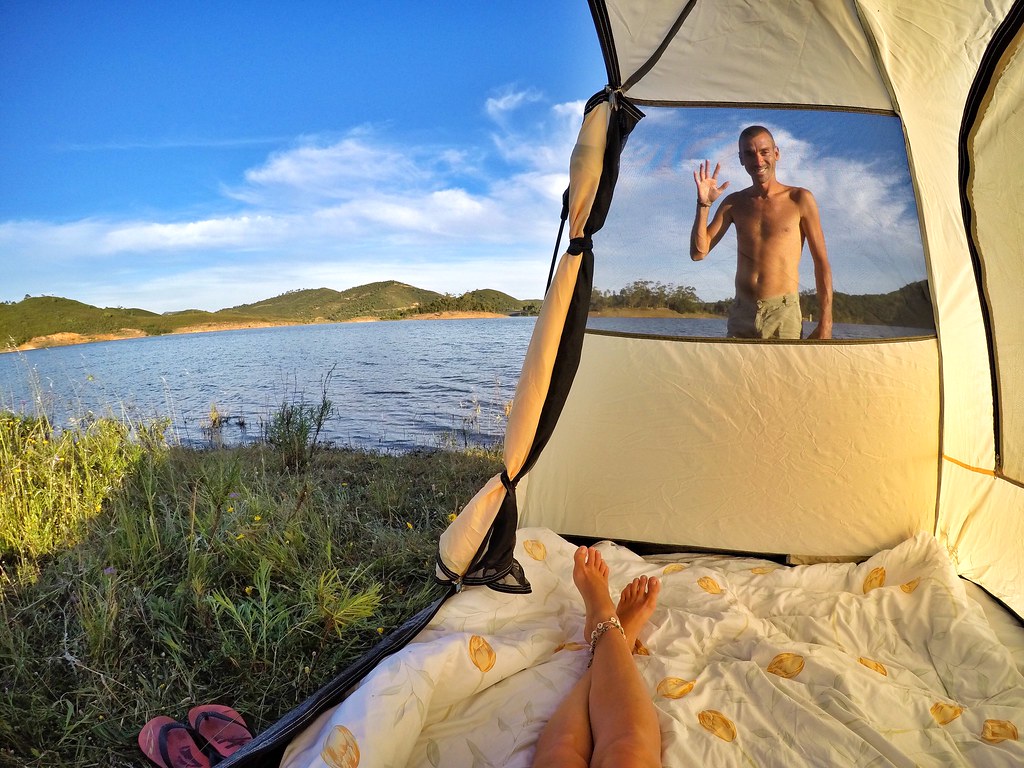 Today we were heading west to Lagos as I desperately wanted to see Ponta da Piedade. The weather was perfect and it was our first calm day at the coast. A narrow, dusty trail led steeply up to a ledge where we got a birds eye view down to Ponta da Piedade. It was basically a group of rock formations with arches and yellow rocks rising up to 20 meters high. They formed a calm grotto area with clear, turquoise water where boats moored up ready to take tourists along the coastline. We also ventured around the other side of the cliffs to get a different vantage point. We were surprised to see frail looking ropes dangling down sheer edges where people have previously hiked. There were wild flowers growing along the arid ground and as we ventured further afield we came across a deep hole in the ground leading to a hidden grotto which kayakers were paddling through. 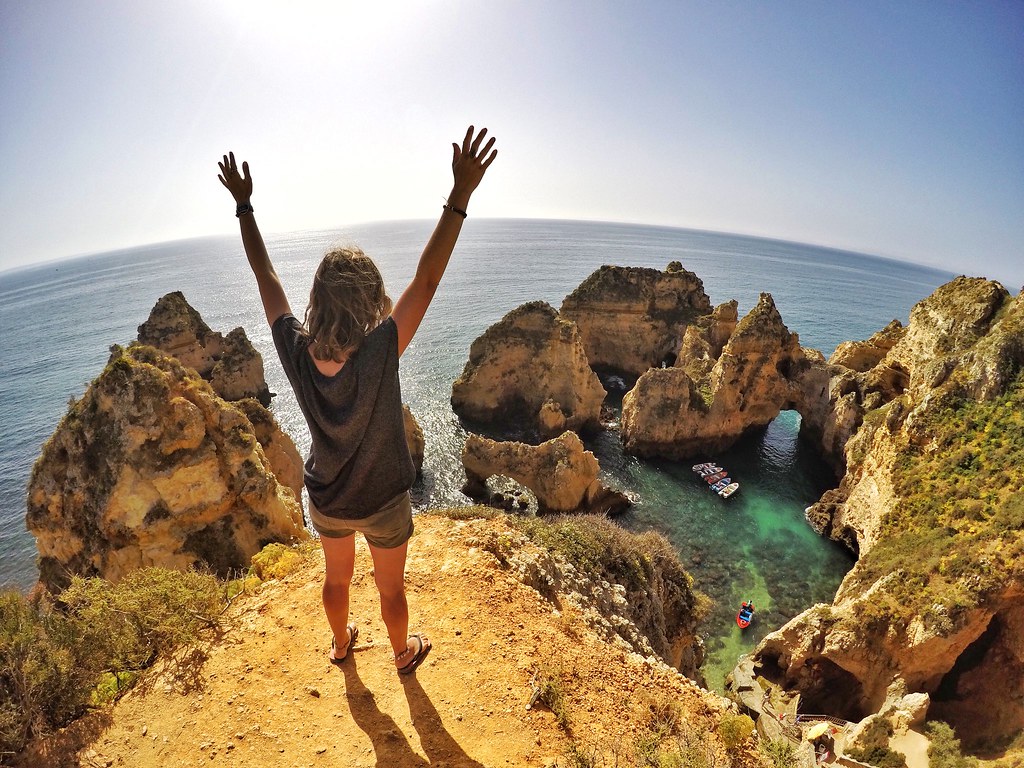 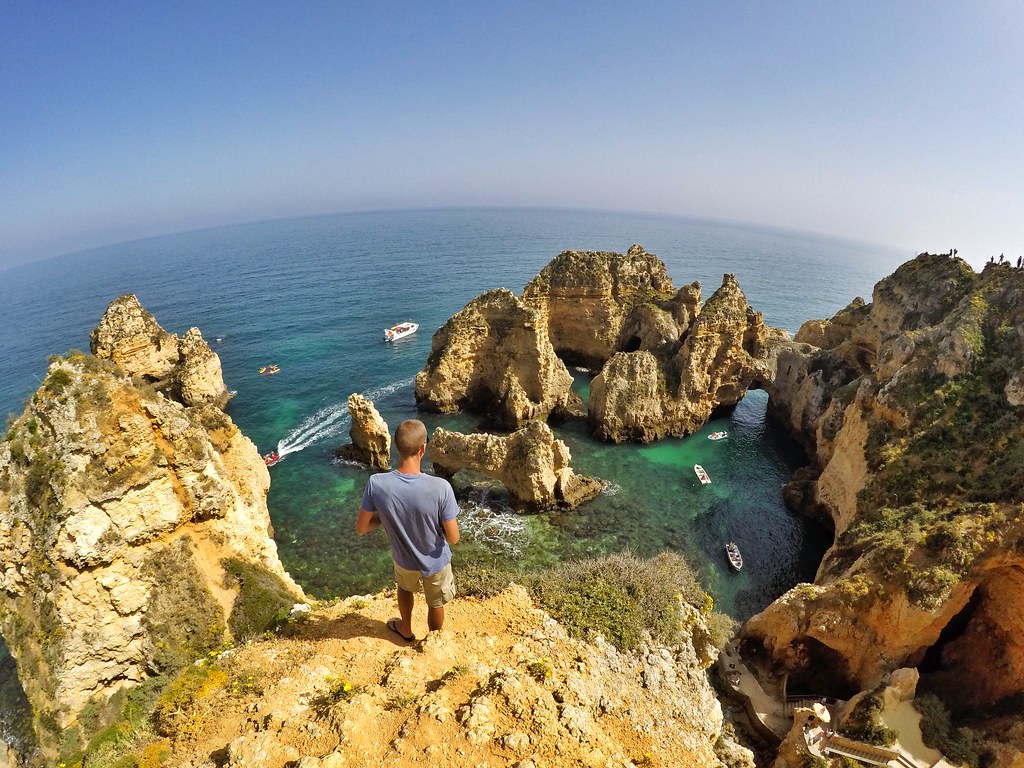 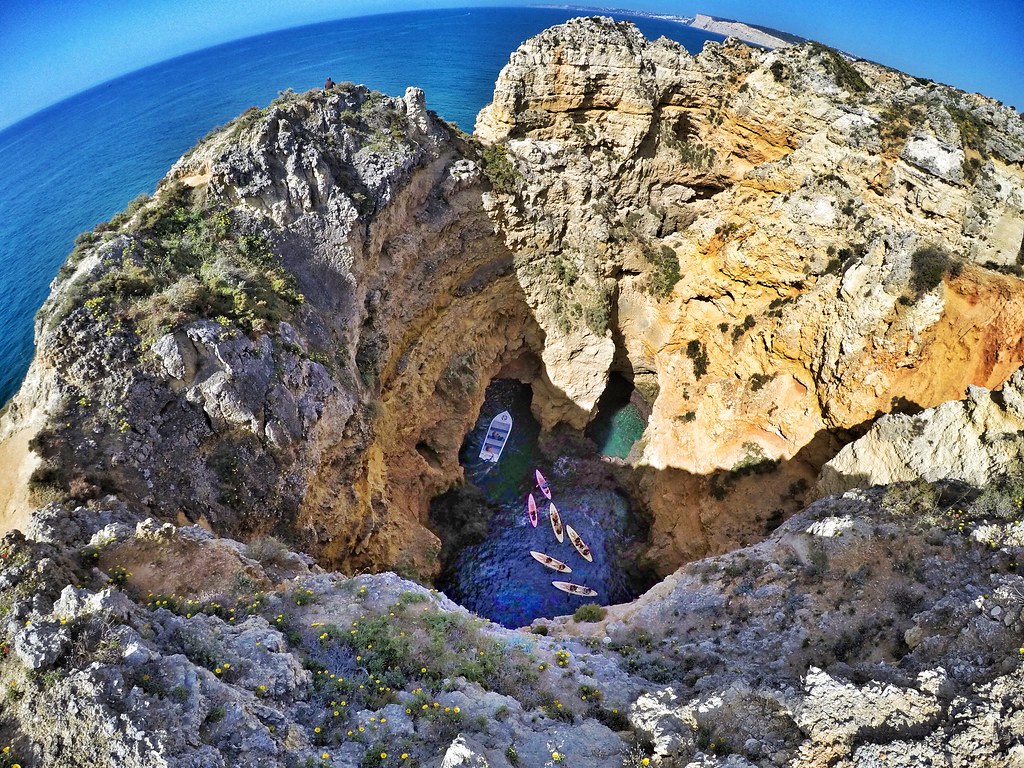 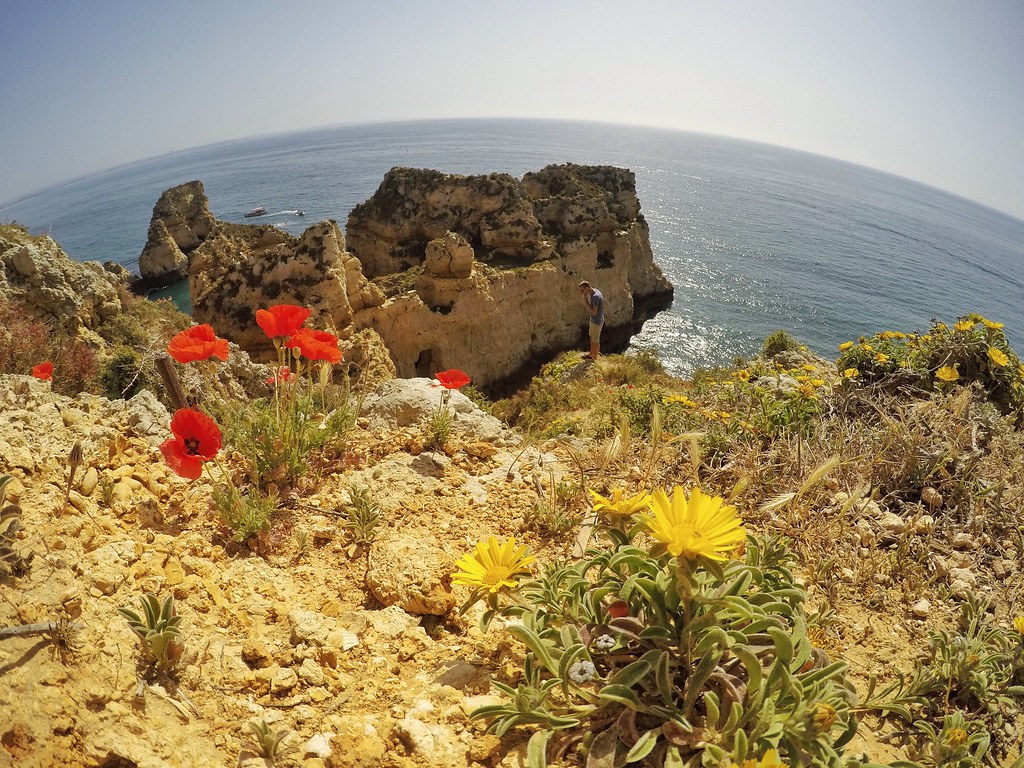 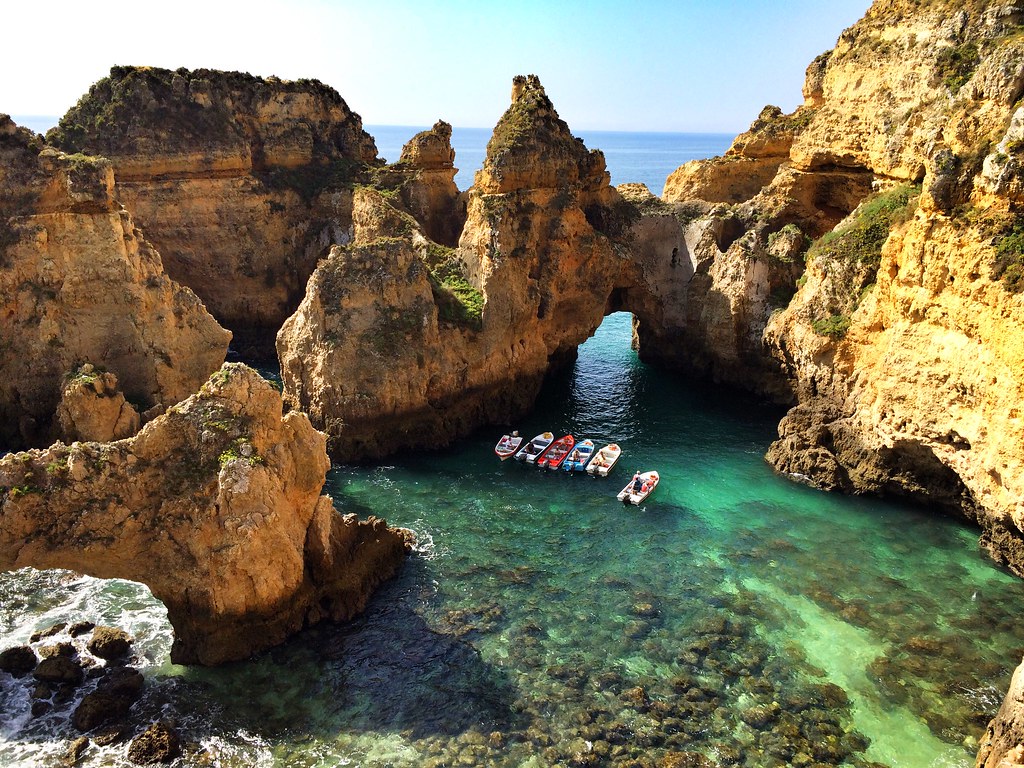 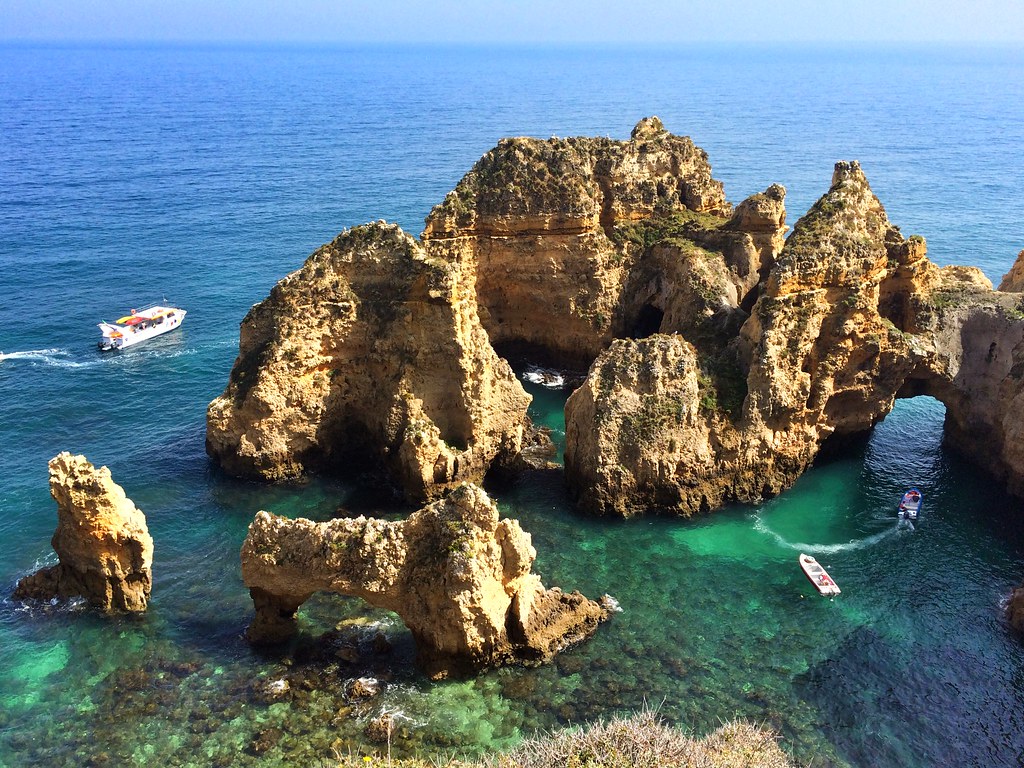 Steps led down to the bottom of Ponta da Piedade but it was definitely more impressive from above. We then headed to Praia Do Camilo which was a stunning beach, probably the prettiest one we’ve been to in Portugal. The sea was calm and clear with people frolicking in the water. Before we headed down the 100 or so steps we wandered along the coastal trail, past terracotta coloured hoodoos and views of the coast. The beach was pretty busy as it was the Easter weekend, but we found a nice spot to sunbathe and enjoy our picnic. Once the sun began to cook us we ran into the sea and had quite a shock to the system – the water was freezing!! It felt like we were swimming in the Arctic and we just managed a brisk dunk and ran back out. Our bodies actually tingled afterwards but we did it all again once we heated up in the sun. We really loved this area of the Algarve, the coastline around Lagos was particularly beautiful and full of amazing viewpoints. We’re excited to explore a new area on our next days off though. 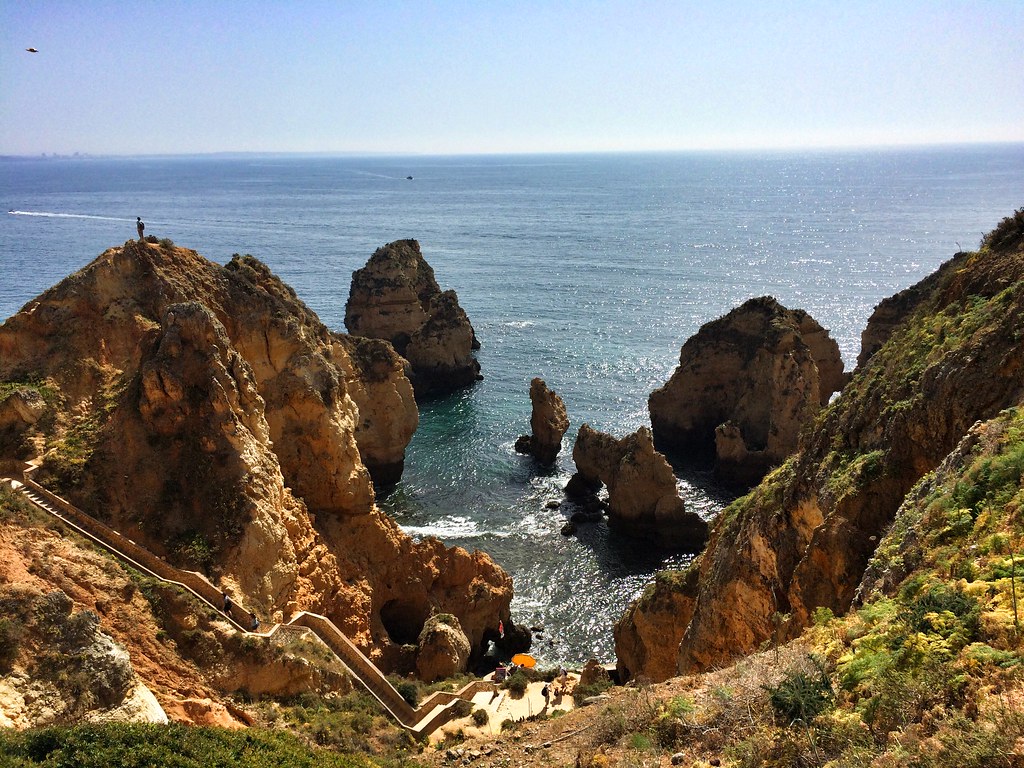 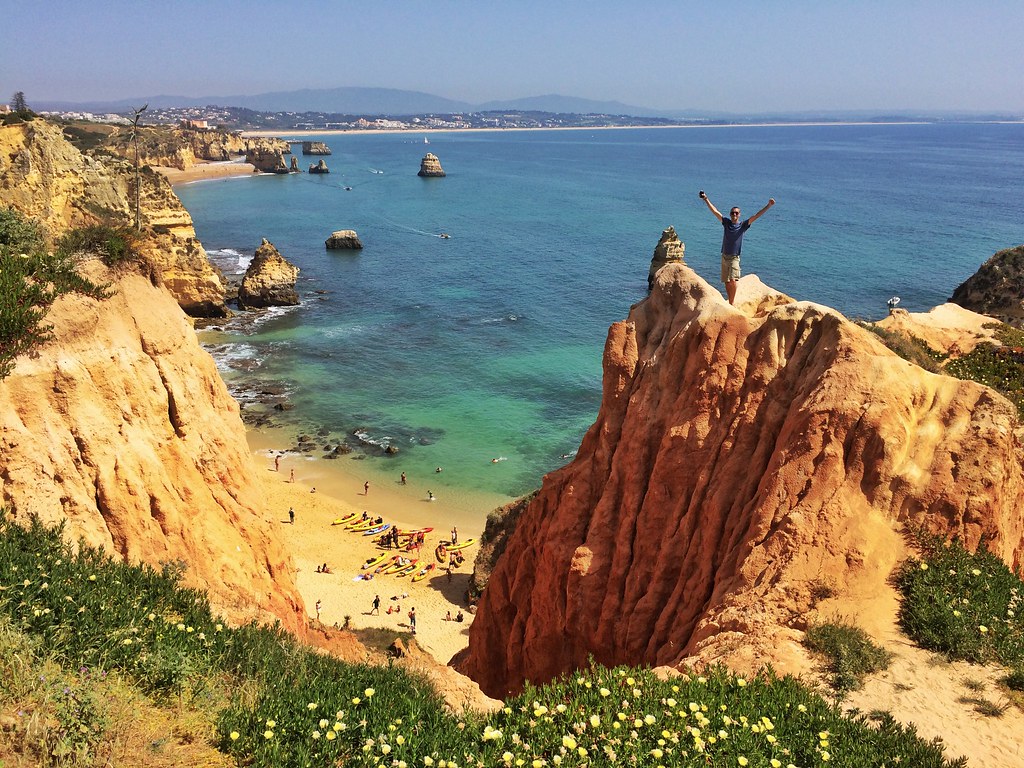 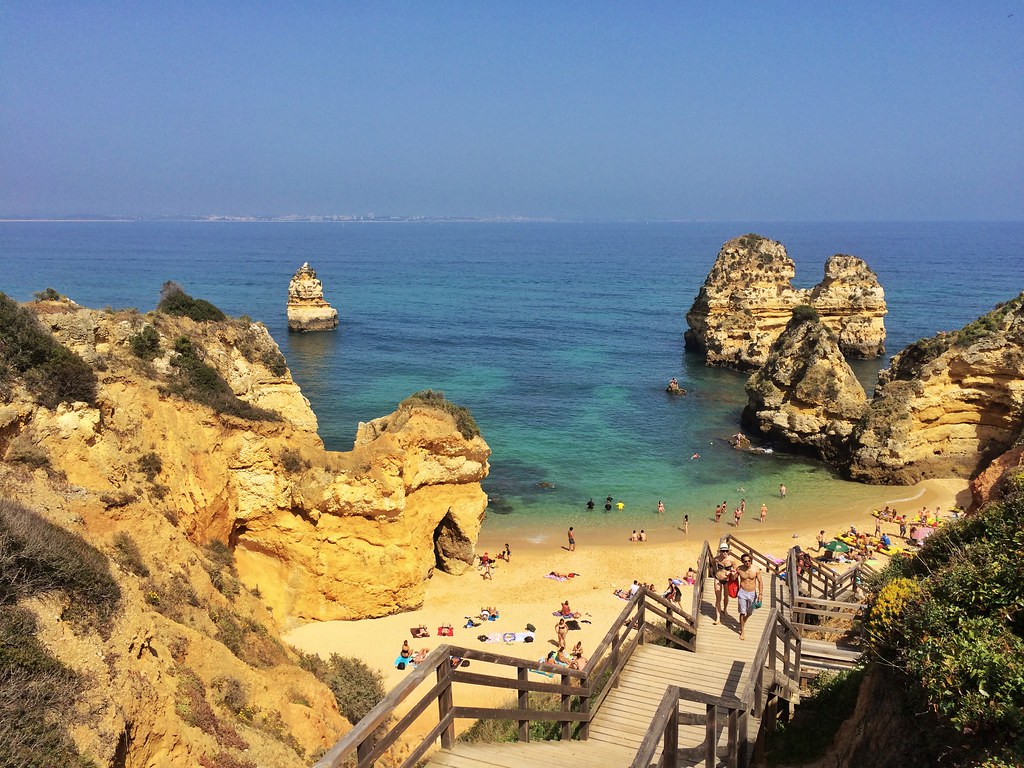 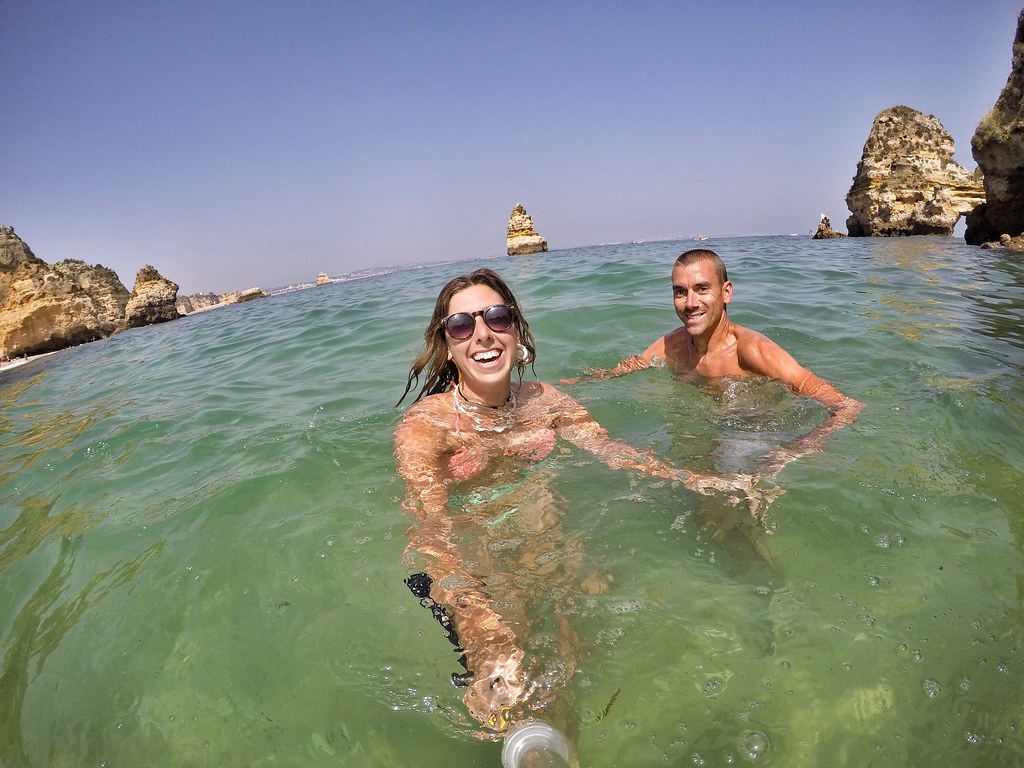