Normally when we get to a new destination I’ll research what the area has to offer, but Portugal was different, we just made a decision to go there and didn’t really know what to expect. We were based in the countryside about 5km from the coast and luckily we had very kind hosts who allowed us to use their Land Rover on our days off. It gave us a chance to explore the area and feel like wealthy country-folk as we stepped out of the Discovery like we owned it. One thing we quickly noticed about the Algarve was how many Brits not only lived there but holidayed there too. To be honest the Algarve felt like a sunny version of England; everyone seemed to be British, we were hearing accents from all around the country and the main drag of shops and bars in Albufiera were scattered with lobster-skinned Brits with their tops off while sipping cheap beer in English themed bars. 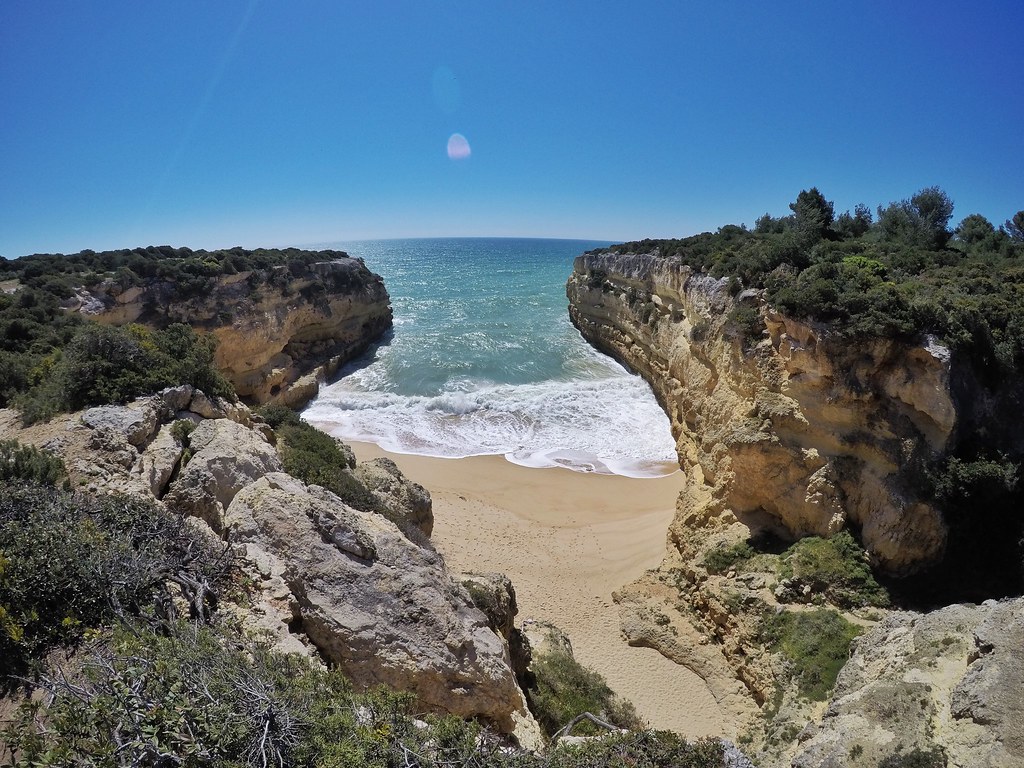 Luckily the sightseeing was spot on though and for our first day we headed to the coast just west of Armação De Pêra. There were lots of free car parks along the coast so we pulled up and began our walk by heading to the church and little peninsula called Nossa Senhora Da Rocha. From there we got our first view of the coast and it was much more dramatic than we’d expected. There was a beach on either side of us with tall yellow cliffs stained orange and red in areas and the quiet beach was being lapped by the rough Atlantic. 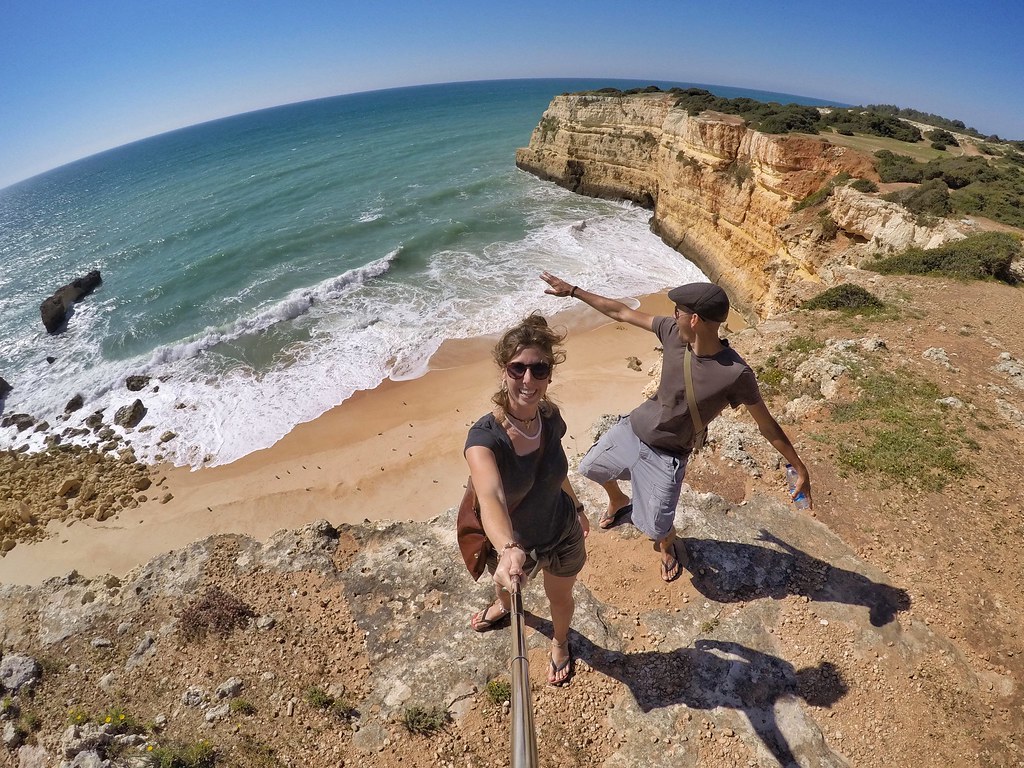 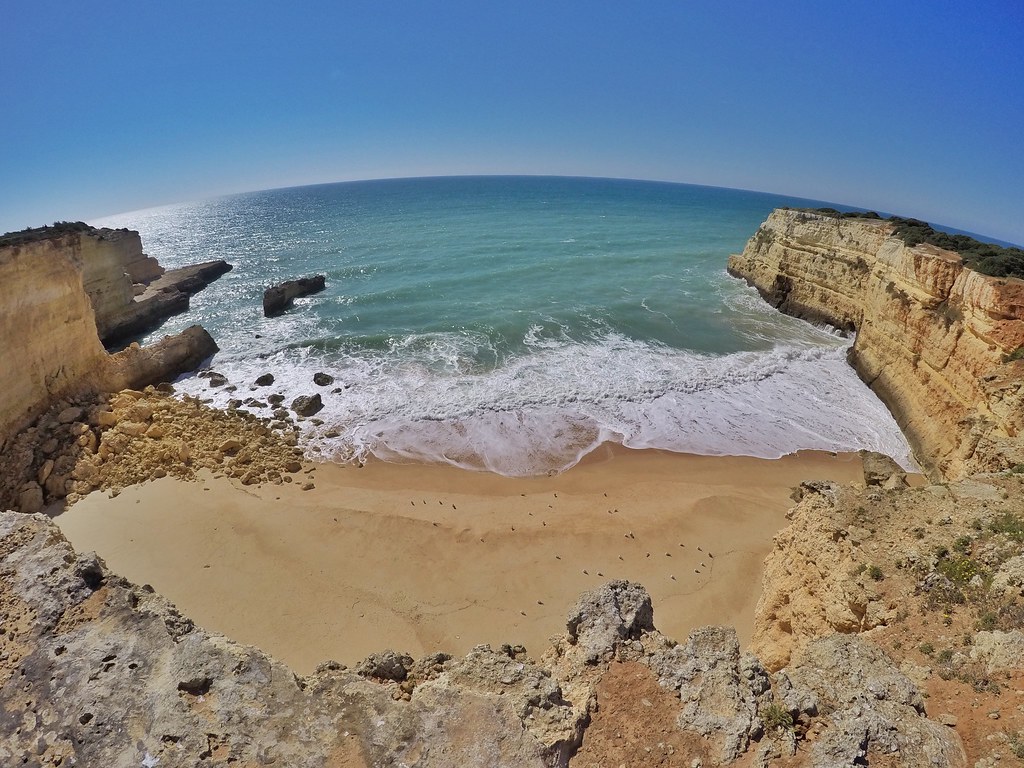 We then followed a dusty track high above the cliffs and walked west along the coast. It was a windy day so the sea was extra choppy and not clear or inviting like the brochures promised. But we did love the area and we ended up getting cracking views of 8 different beaches in just 2km of walking. Some beaches had steps leading down to them while others were surrounded by sheer cliffs and only accessible by boat. The coastline was also dotted with sort of sinkholes where the ground had collapsed and we could peak into the giant hole where the sea was sloshing in and eroding the walls. The trail continuously surprised us with impressive views and we found ourselves saying “ok one more beach and then we’ll head back” but we just kept going because we wanted to see what was round the next corner. We eventually decided to call it a day when we reached the impressive Arco de Albandeira. It was a rocky arch that curved into a bay and was so picturesque. A trail led us to the top of the arch, high above the milky sea which was hitting the fragile walls. A group of birds swooped past us and flew through the arch which made for a perfect photo. I guess because I research places and see photos online I always spoil the surprise for myself but today Craig and I were equally as surprised and felt like we’d made a great choice coming to Portugal. 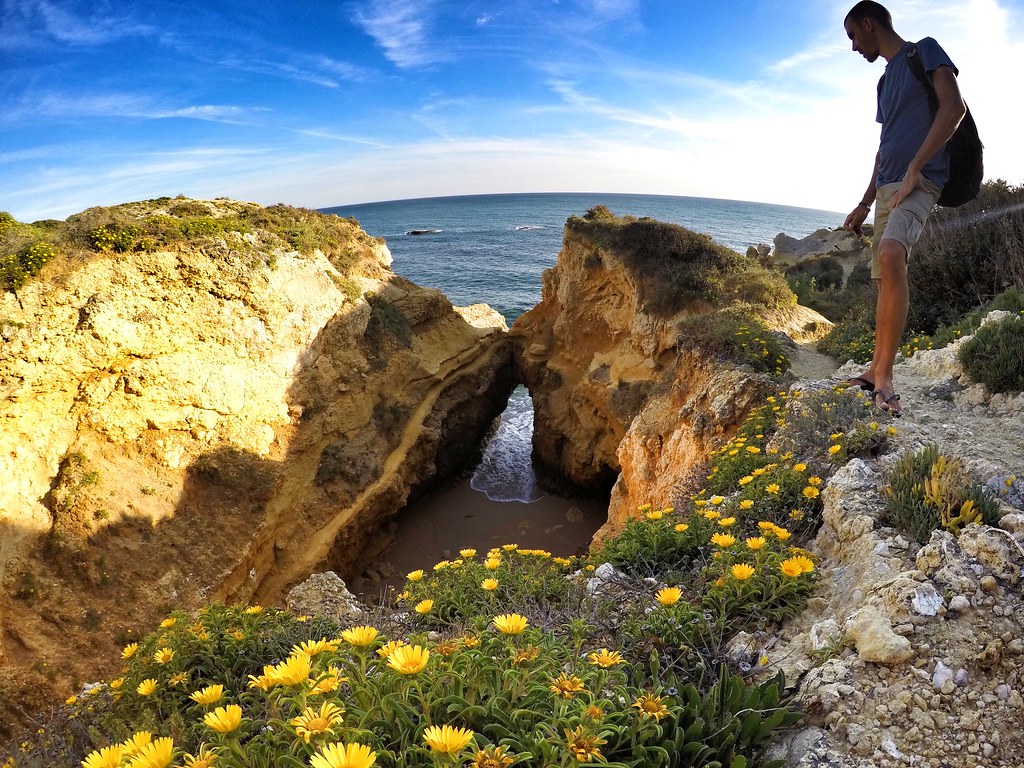 We ended up having a picnic along a different area of the coast near Galé. A short stroll led us past rock pools and minuscule beaches wedged between cliffs. There was hardly a soul around and we found a lovely spot to sit and enjoy our cheese and beer while watching the sun set. 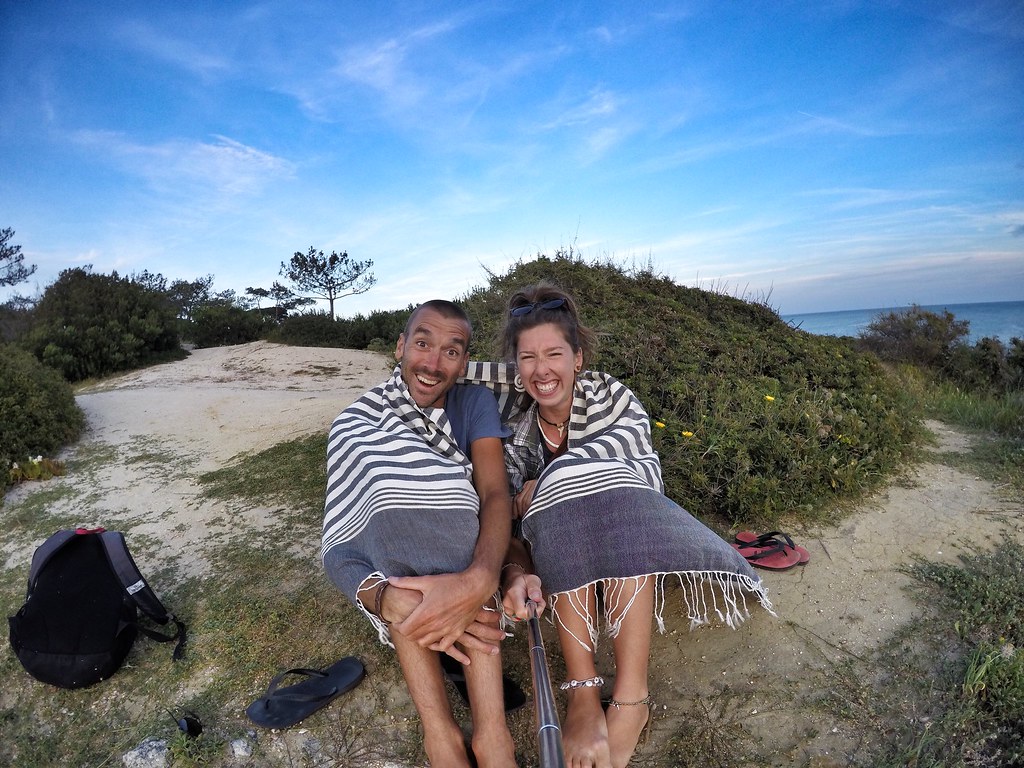