The little village of Imlil is one of Morocco’s top hiking destinations thanks to it being surrounded by the dramatic Atlas Mountains. We set aside 5 days there, giving us a nice weather window to hike Jebel Toubkal and some relax time afterwards. The hiking began as soon as we stepped out of our grand taxi and realised our hotel was marked in the wrong location on our map and was actually in the next village along. The road went on and on and occasionally I’d look back at Imlil shrinking into the distance behind us. Finally we approached the little village and wandered down a track past almond blossoms. We crossed a bridge and squeezed past some mules where we were ‘greeted’ by a 3 year old kid with ginger hair. She seemed to think that her unique hair colour gave her special rights to hit sweating tourists walking past her with a stick. I hate kids and this one really tested my patience “Craig, if she does that one more time I’m pushing her in the river!!”. Of course I didn’t do that, instead I shouted the Arabic word for no at her “la…LA…LAA” sounding more like Babe the Pig than an intimidating grown-up. As you can imagine we weren’t exactly in high spirits when we finally arrived at our hotel in the middle of bloody nowhere. I told the owner that the place was marked wrong on the map and she apologised profusely, offering us delicious mint tea on the roof terrace with killer views. Then she gave us a complimentary lunch and I became very suspicious while Craig dug in like he was involved in an eating competition. Finally the hit came “I’m very sorry but we are fully booked and don’t have room for you here, but we can put you in the hotel just over there” she said pointing across the lane to a rather run down looking hotel. I wasn’t in the mood for that at all, we’d booked this hotel, the views were amazing, the rooms cheap, we were staying no matter what! So after a lot of complaining and dramatically slapping my forehead occasionally to demonstrate my frustration, our room suddenly became available – very bizarre! So for just €15 a night we had a huge luxurious room with balcony and mountain views! Hooray! 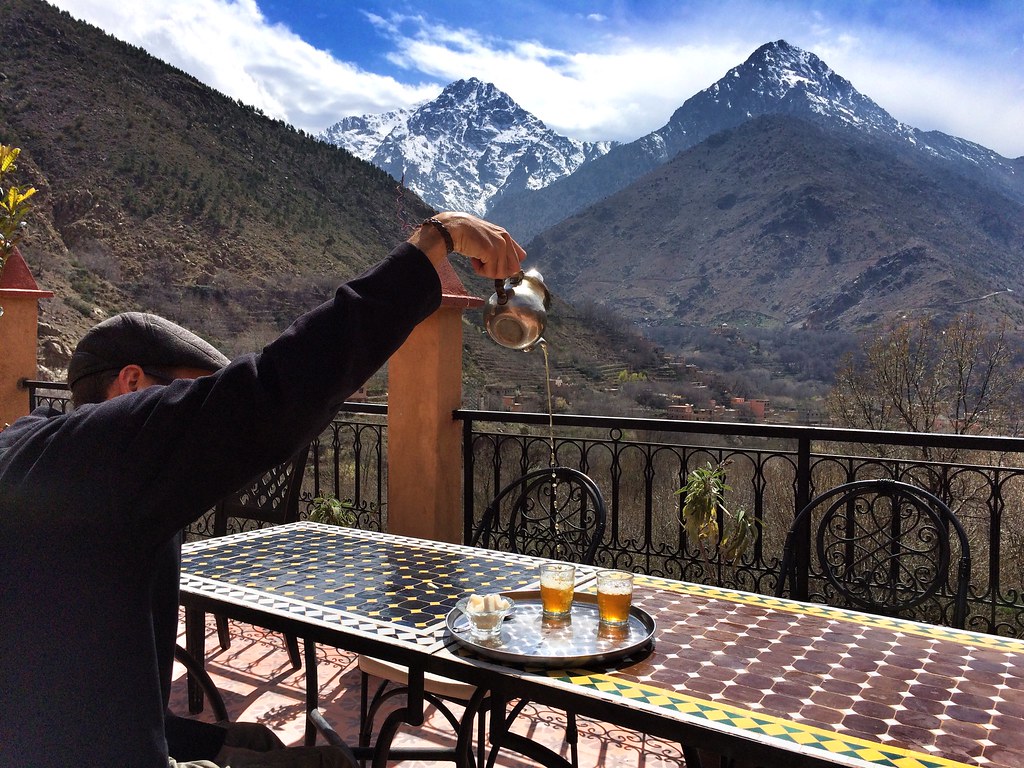 I’d like to say we slept well but the hotel was goddam freezing. Imlil lies at 1740m elevation and the night temperatures dropped below zero. We headed up to the roof terrace where a full Moroccan breakfast was laid out on a mosaic table for us. The sun finally touched our backs and began thawing us after the bitterly cold start to the day. We needed to prepare for our mountain summit so we headed into Imlil and visited some second hand shops catering to trekkers. We definitely needed crampons as half of the hike would be snow and ice covered. We’ve never used crampons before so we tried some on and they really didn’t work well with my trainers. I ditched my ripped hiking boots last year and downsized to some $20 hiking trainers, but sadly they just didn’t work with the crampon straps so I began trying on skanky second hand hiking boots. Two Englishmen entered the tiny store and we got chatting to them. Turns out they were highly experienced mountain guides and were taking 12 university students up Toubkal. They strongly recommended taking ice axes too, which we hadn’t expected to need. They kindly demonstrated how to use them, basically ramming the pointy end of the axe into the snow with your body weight and chest bone pushing down on the blunt side – you know, for when we slip off a precipice of something! Suddenly the hike didn’t seem so simple and they actually drilled a lot of fear into us. They also recommended the really stiff hiking boots for me, the ones you see people hiking Everest in! There was lots of information to take in so we went for a walk up the valley to Aroumd where we were treated to beautiful mountain views. There was a vast stony river basin where certain areas were covered in lush green grass and almond blossoms. We bumped into some people on their route back from Toubkal and managed to get some first hand advice about the trek. The biggest issue people seemed to have was the cold weather, one guys hands were ice blocks in his -20 degree gloves! While another guy said the winds were 80kmh, making the real feel around -18 degrees…So, we definitely needed to hire some gloves as my dollar store ones certainly wouldn’t be good enough. 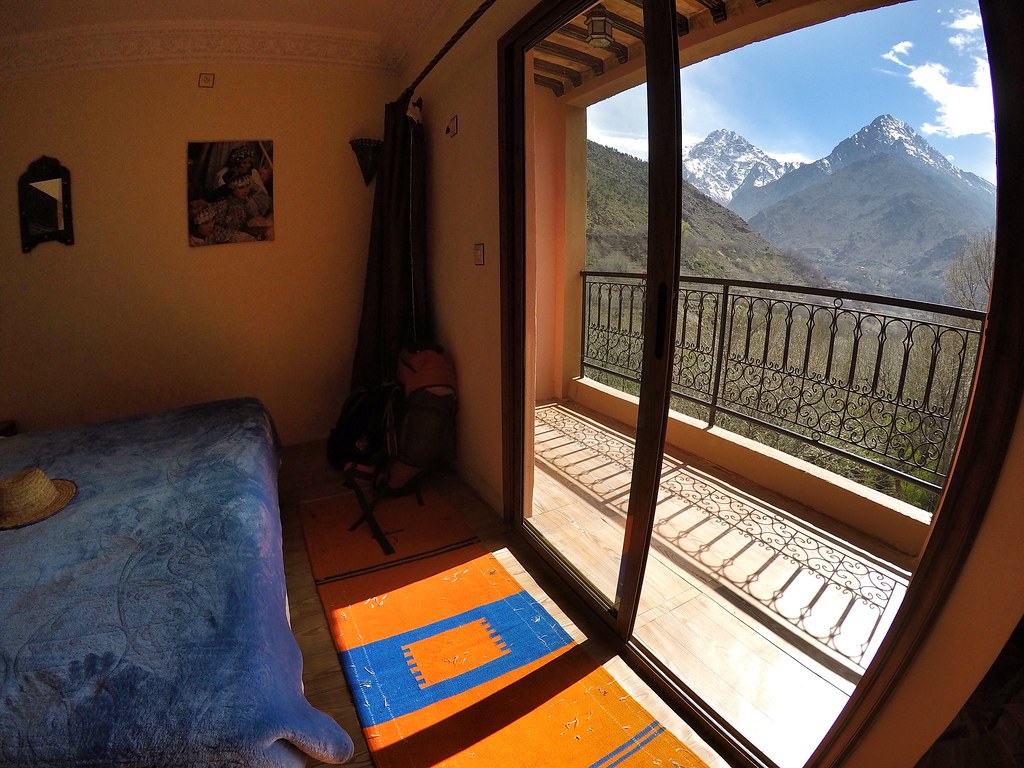 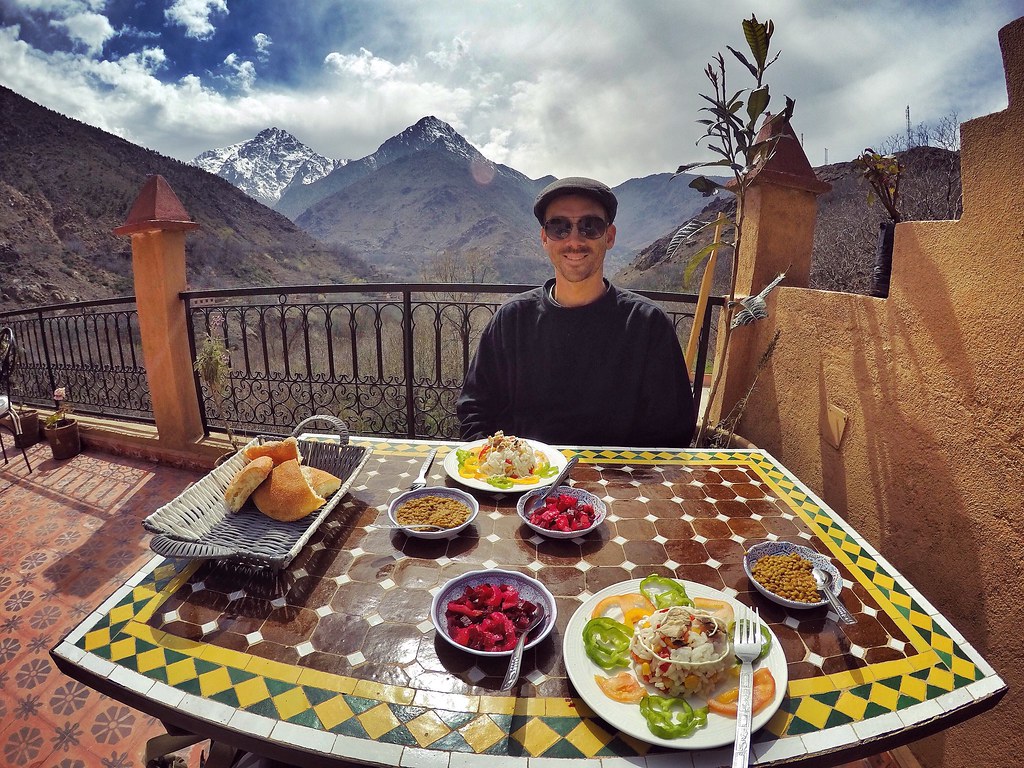 We walked back to the village and came across a shop renting different style crampons which worked with my trainers. I much preferred that option as I didn’t want to get blisters from wearing bad fitting shoes. So in the end we rented crampons, ice axes, a backpack and gloves and with some very persistent haggling we got them for €30 for two days. So now we just had to hope the weather would remain sunny.

I was so happy when we woke to crisp, blue skies which were ideal for our Mount Toubkal climb. We’d opted to go without a guide as we felt confident about finding the route and agreed that if at any point we didn’t feel safe we would just turn back…and do the walk of shame back to Imlil! Day one involved hiking from Imlil at 1740m up to Refuge Mouflons at 3207m which would be our base for the night. We set off and were immediately stopped by two kids with their bikes on the ground. They pointed to the chain which had come off and looked at Craig with puppy-dog eyes, hinting for him to help them.

The hike was tougher than we’d expected, especially as we were carrying so much with us; water, sandwiches and snacks for two days, crampons, ice axes, thermal underwear, coats, hats…you get the picture. Normally we hike with a small day bag and take it in turns but now we both had a bag and boy did they weigh us down. The first section hiking along the dry river valley was easy going with snowy peaks straight ahead of us. A section of switchbacks led us into Toubkal National Park where we walked a high, flat trail through the valley until we arrived at Sidi Chamharouch. The village was lined with stalls selling fresh orange juice and little eateries built right beside the crystal clear river and rock pools. Shops the size of wardrobes were selling all sorts of stuff that no one in their right mind would buy while hiking a mountain. Our bags were heavy enough, like hell were we interested in buying a giant fossil or a bottle of Argan oil – Craig wouldn’t even let me pack deodorant! 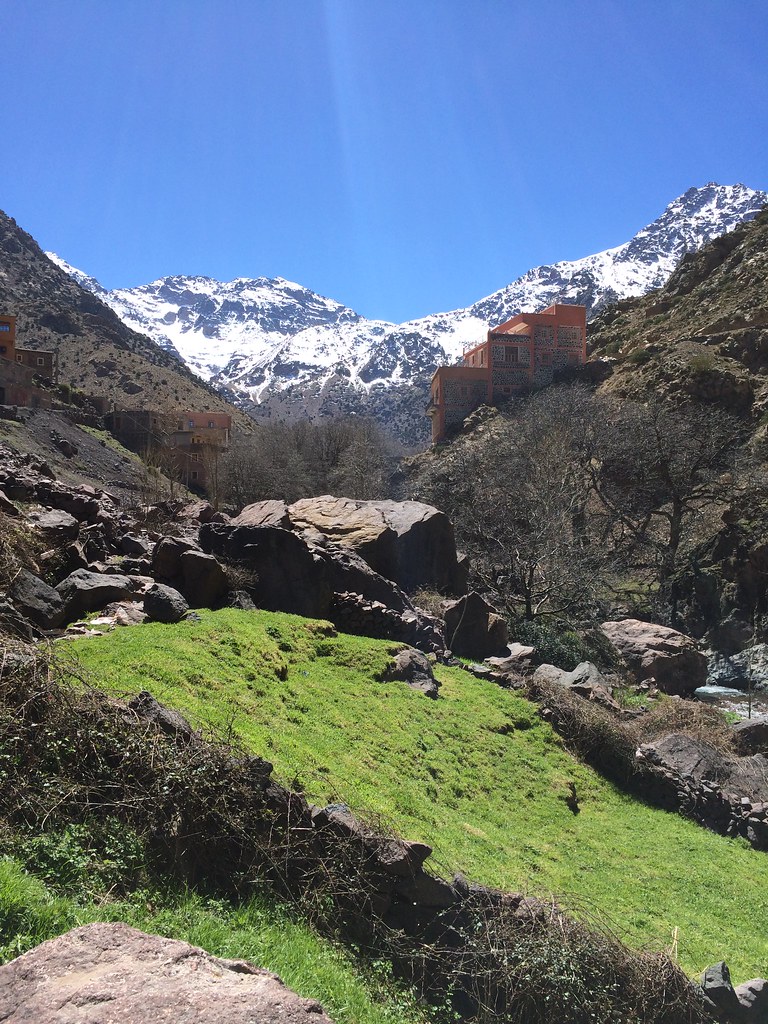 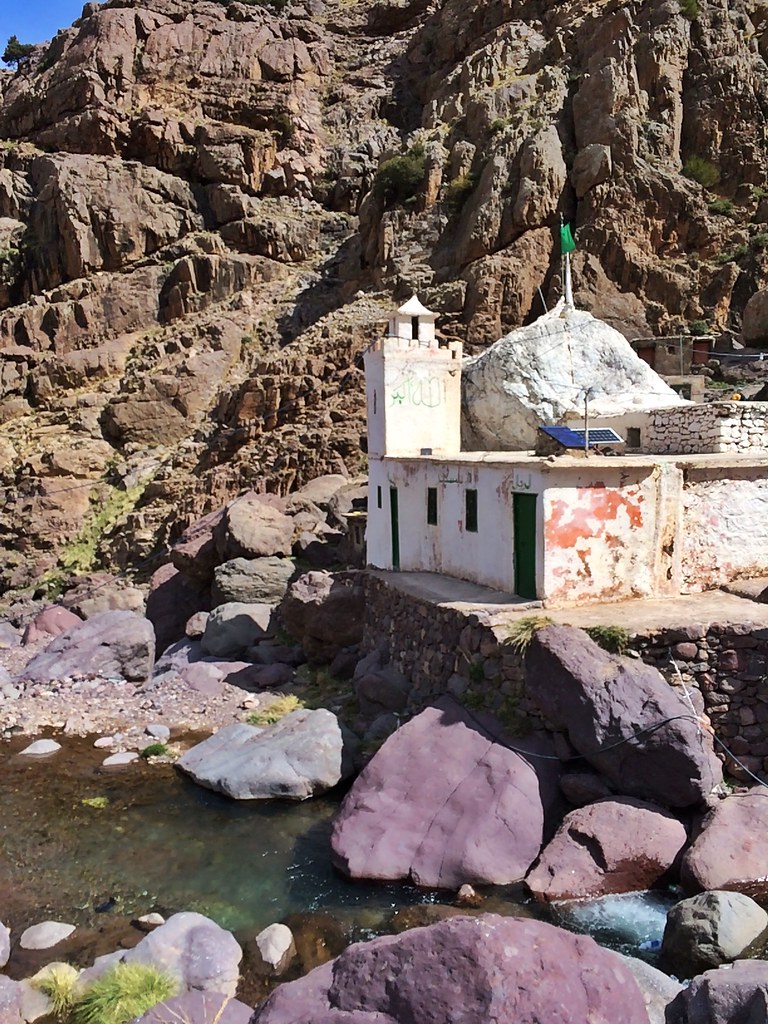 The hike became really tough after the village as we went up relentless switchbacks into a new valley. We were slowly climbing up to the snow-line and the mountains to our left were steep and snow covered with small Avalanche tracks down them. We passed a few expedition groups who’d hired sad looking mules to carry all their gear up but as soon as they reached the first section of snow on the trail it was their time to relax. The mules had their gear removed and were free to roam for grass amongst the rocks and steep slopes. It seemed to be the small expedition groups who hired the mules and it was funny how they all wore the latest outdoor designer gear, yet they paid a mule to carry their gear up, like they wanted to look the part but not actually act the part. 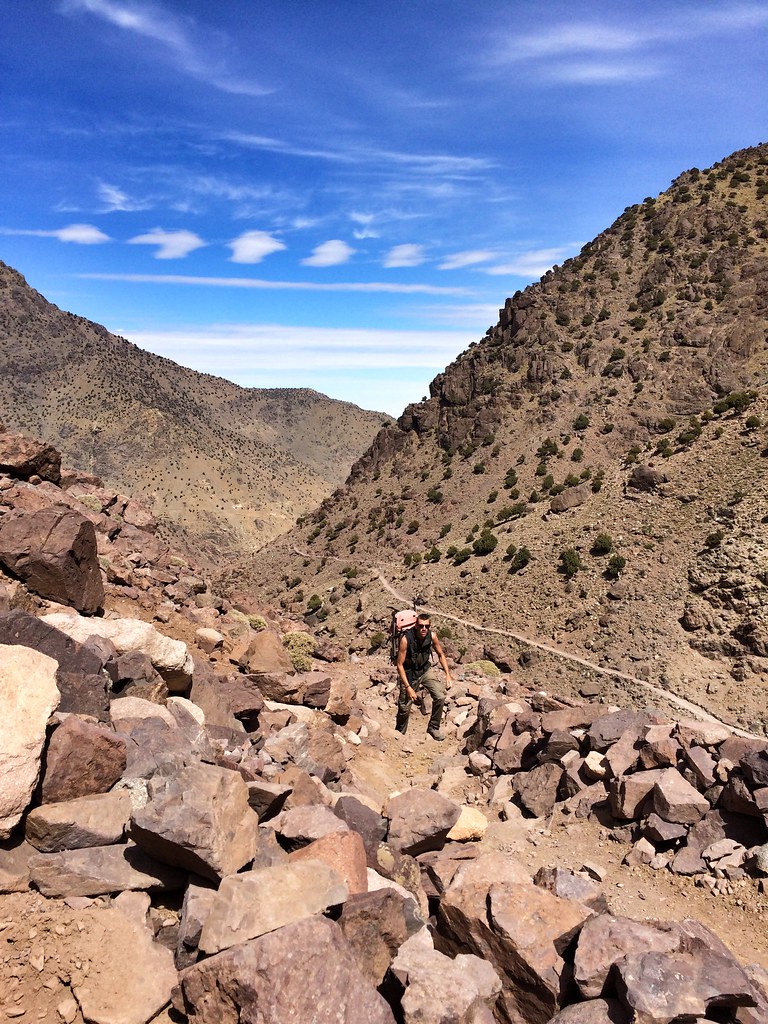 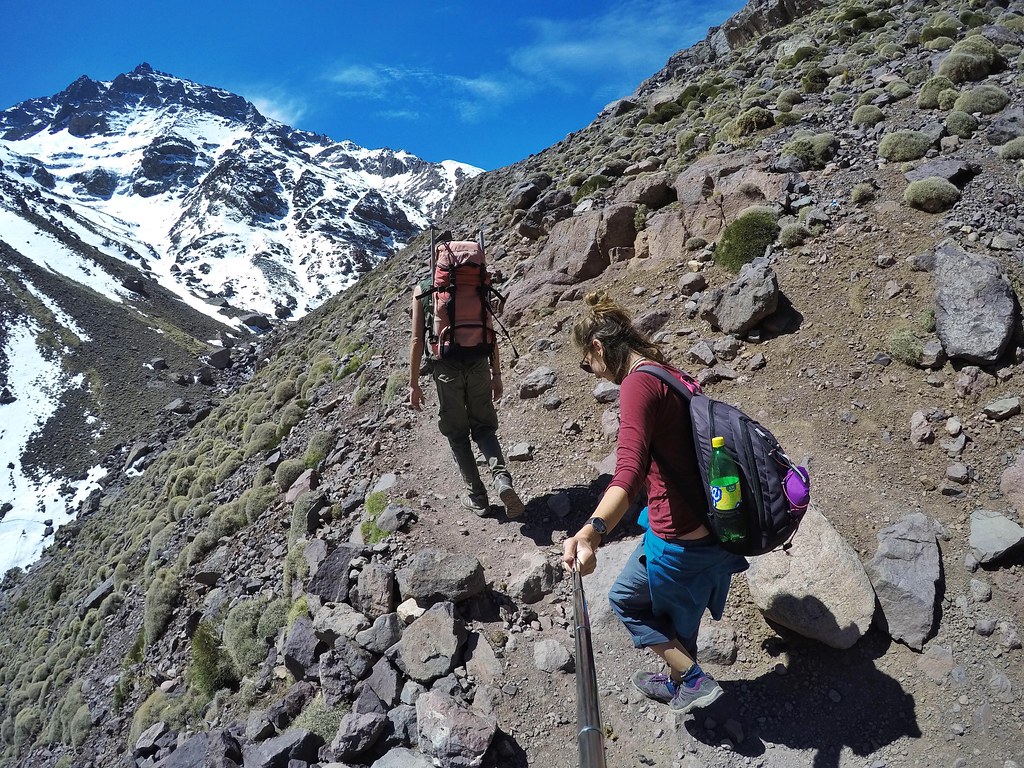 The snow on the ground was intermittent to begin with, maybe 100m and then back to gravel so we didn’t bother with the crampons. It took us about four and a half hours to reach Refuge Mouflons which was positioned rather precariously in a basin surrounded by steep mountains. It was the first mountain refuge we’d ever stayed in and I must say I was totally dreading it. We were some of the first people to arrive and after having our passports checked we were led to the dorm. There were about 24 beds in the dark room, with two double bunk beds and one gigantic bunk that stretched across the entire room and slept 16 people. I was relieved we’d arrived first and managed to nab a nice double (not nice but not as shit as we’d expected). The poor sods who had to sleep in the long bunks would be face to face with a stranger, a smelly, sweaty stranger. But overall we were happy to have a thin mattress, pillow and smelly blankets and it was tidy and clean enough for one night. They even had showers but we didn’t anticipate that and had already agreed on being smelly for two days. 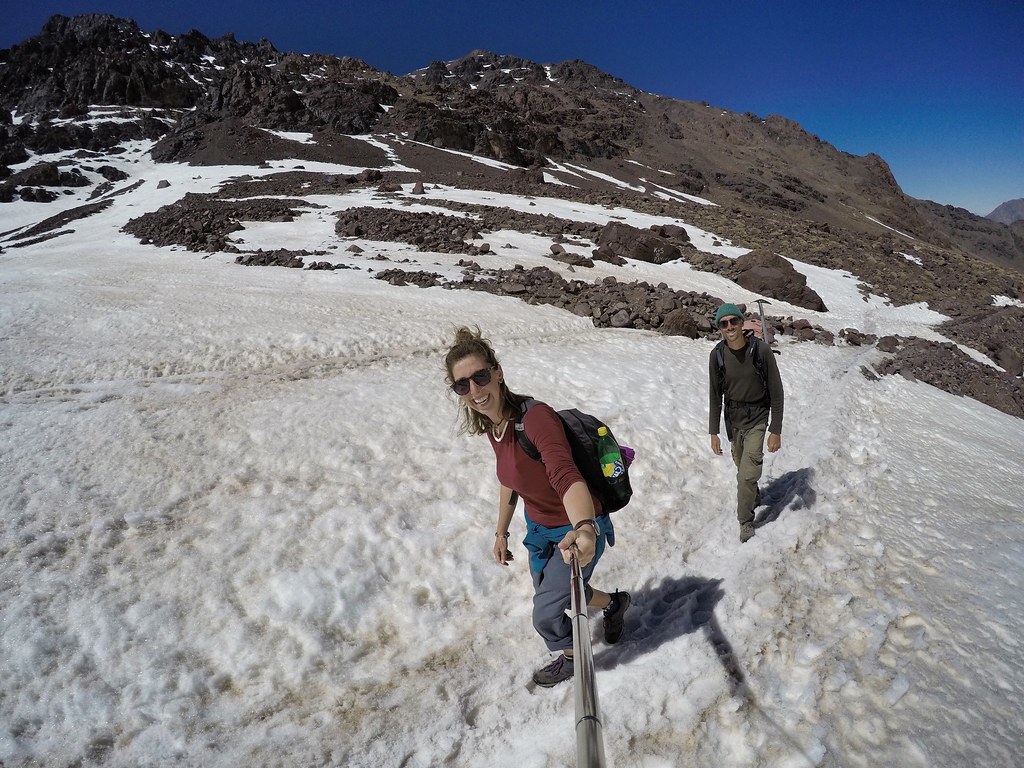 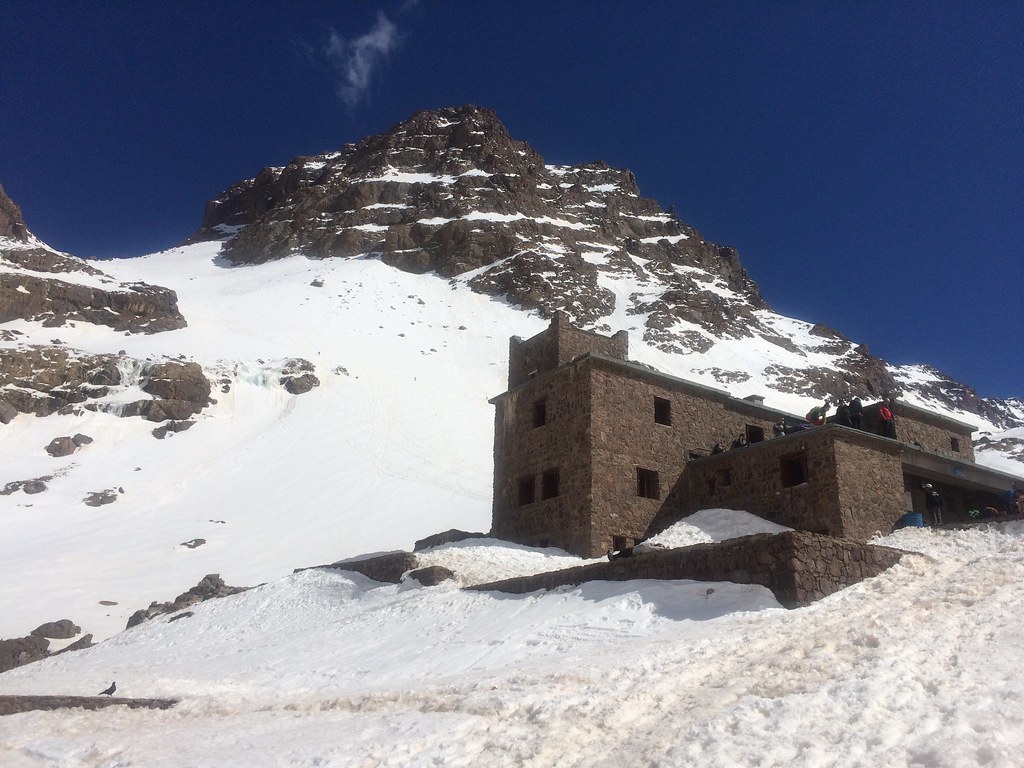 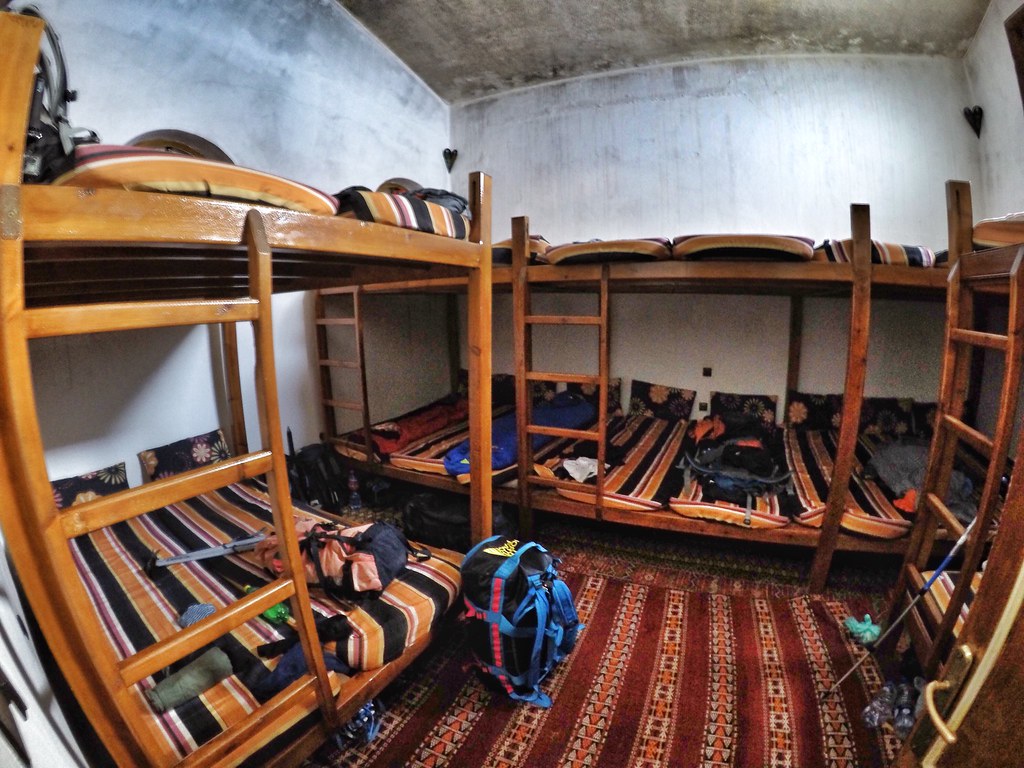 Now that the day’s hard work was over, we had to keep ourselves warm, so we put on some layers and went out onto the sunny terrace. The view was incredible looking right down the snowy valley where we’d come from, and we laughed at how much warmer it was way up here than it had been in Imlil. The odd cloud drifted past the peaks and the sun made its descent behind the peaks. We decided to quickly test walking in our crampons so we did about 10 steps and it felt fine so we went back to the terrace and bumped into the friendly Brits with their uni lads. Both men were shocked to see I hadn’t hired boots and was going to attempt the climb in trainers. There was lots of banter about how ill-prepared we were compared to them, but the true test would be if we made it to the summit and back down in one piece. 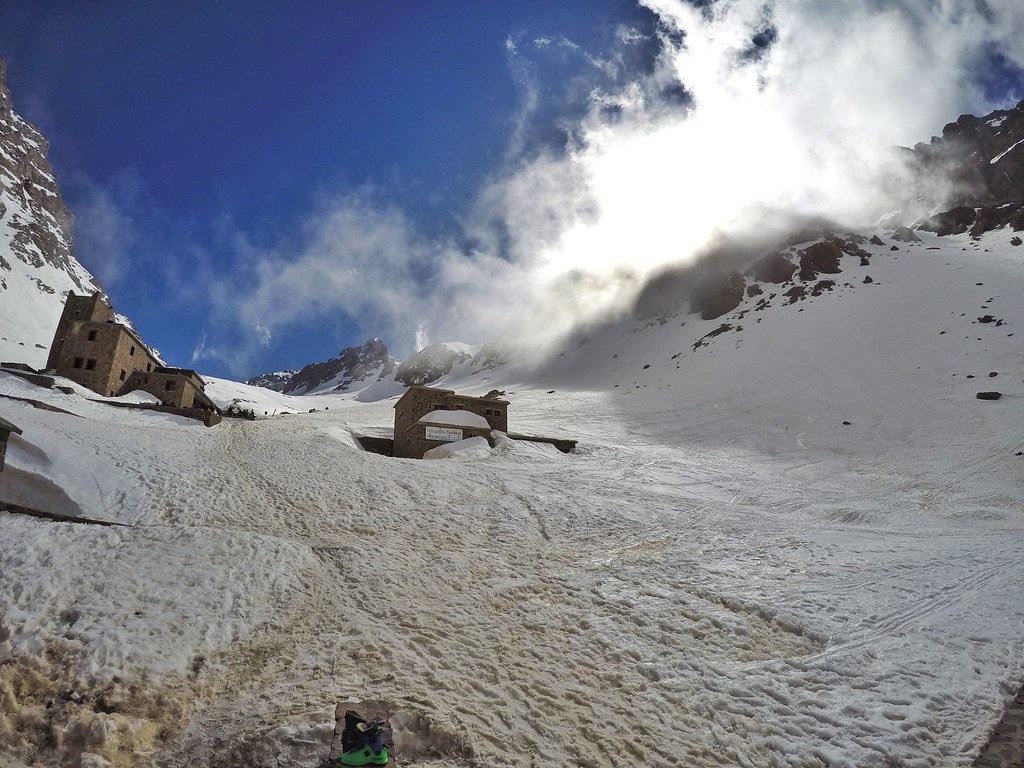 The refuge charged €14 for a dorm bed, dinner and breakfast so we headed inside to the dining room to warm up. There was a large fireplace shipped in from Europe with a big glass window revealing the intense flames. It was a bloody good fire and we were quickly delayering and shuffling away to cool down. Once again the refuge surprised us with a tasty, filling meal, mind you they totally ignored the fact that I was a vegetarian but I picked around the chicken. After dinner the Brits, Chris and David told us lots of fascinating and scary stories from their expeditions around the world. Then they got serious and wanted to genuinely check we were prepared for tomorrow, asking us what time we were leaving and talking about altitude sickness. They even asked us to leave a note back at the refuge so they knew we’d got back ok as they were going up Toubkal the day after us. It was very sweet that they cared so much though. I actually had a thumping headache which I blamed more on the heat of the fire than the altitude, but even after some paracetamol it was banging and Craig and I were getting worried. If I still had the headache in the morning there was no way we could attempt the summit…