I was relieved to wake up with a clear head and no signs of altitude sickness so we were safe to hike. We had an awful nights sleep in the dorm and even with ear plugs in I could hear strangers snoring and farting and it drove me mad. We’d anticipated a bitterly cold night but decided not to rent sleeping-bags in Imlil due to the extra money and weight, and instead we used free blankets at the refuge…my god did they smell bad! It was like a mix of cabbage, cheese and stale farts and every time I moved the smell would waft up my nostrils and I’d let out a little gag and try desperately to remain still. On the plus side the blankets were incredibly warm, but it meant I had to take some layers off and my skin was that much closer to the never-washed blankets. I could hear some people waking up at 5am to hike the summit for sunrise, bags were being unzipped and torches accidentally shone in our faces. We had our shitty wind-up torch which required winding every minute or so and let out a dim glow, but these ‘expedition’ hikers had top notch torches so powerful that I thought the main light had been switched on. 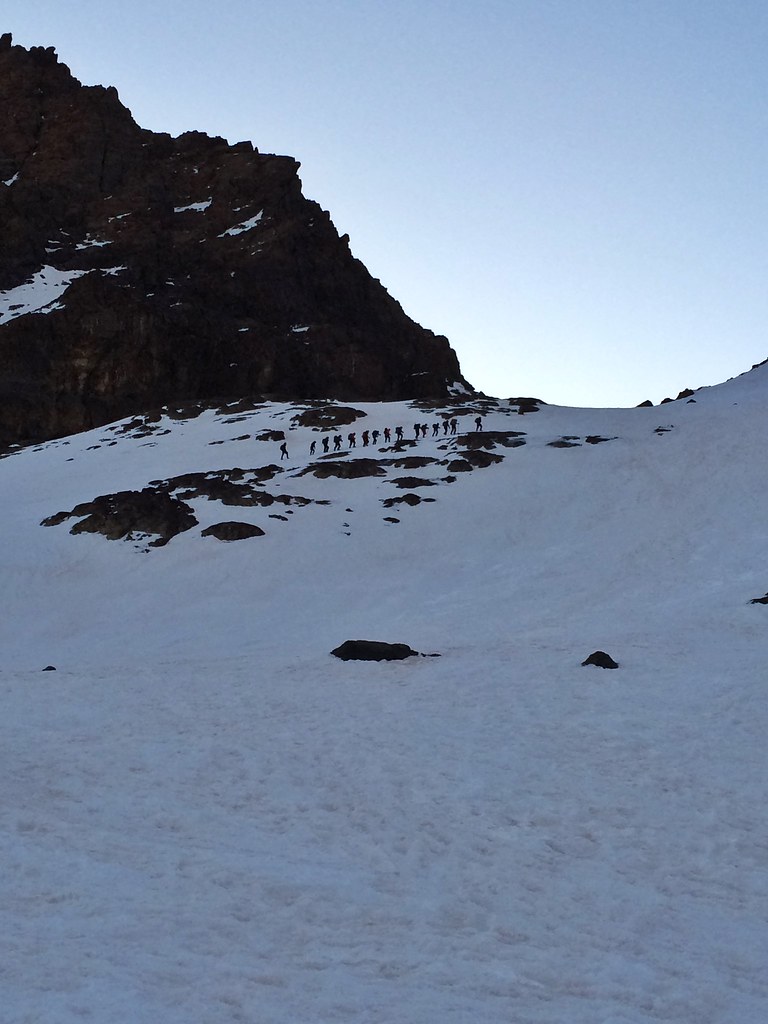 Because we didn’t have a guide to lead us up the mountain, nor did we have a head torch, it seemed silly to leave when it was dark. I did pop outside as soon as I woke up though and it was a beautiful sight seeing the sky filled with stars above the snowy peaks. A simple breakfast was served and then it was time to begin the hike. We strapped our crampons on and stepped out onto the crunchy snow. The sky was now a pale navy colour and the stars had mostly vanished so we could clearly see the pass we had to climb over. There were a few groups ahead of us, lined up tightly like they were preparing to do a mountain conga. It was really cool seeing their little black figures in the distance with bright torches shining from their heads. 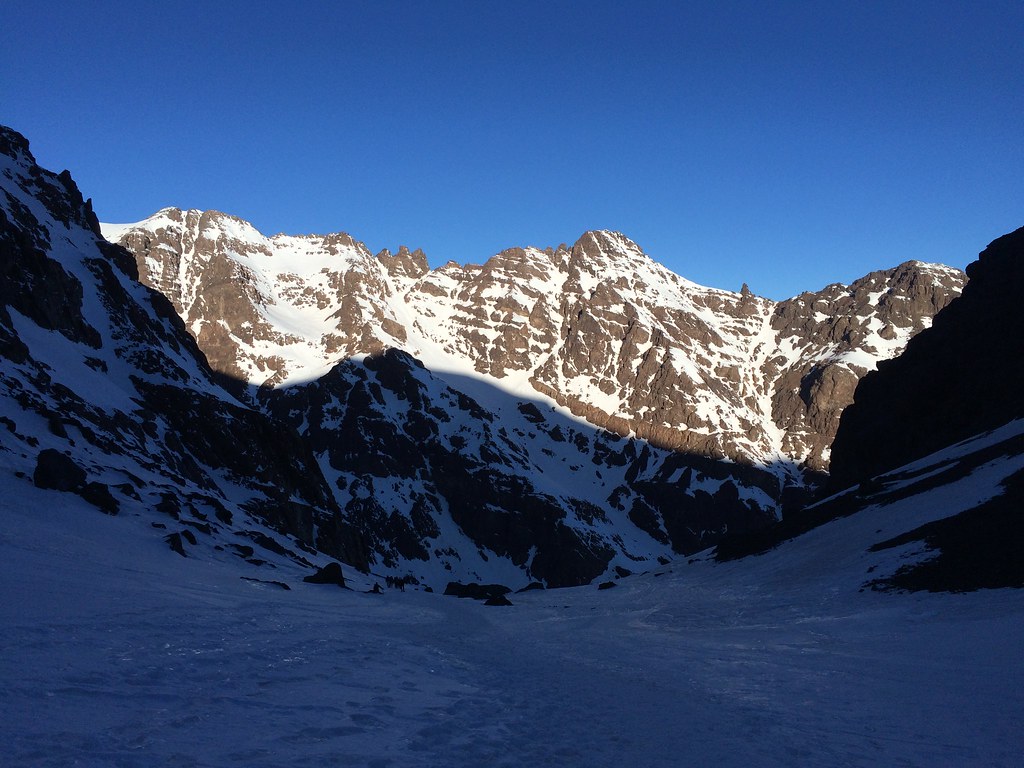 The first section leading past the two refuges was one of the steepest. It was only about 4 meters up but extremely steep and it felt like our first test – if we couldn’t get up this then we may as well head back now. Then we followed a narrow snowy track that wiggled like a snake up the mountain. We were surprised to see a guide walking back already with two Europeans, one of which must’ve had issues with altitude or vertigo as the guide had him on a sort of dog lead. At times the path was less than a foot wide with a steep slope rising up one side and an even steeper slope heading downhill. I guess these were the ‘exposed’ sections we’d been warned about; if we slipped here and didn’t manage to stop ourselves with our ice axe then we’d keep slipping down the mountain, hopefully right back to the refuge and via no rocks but that would be in an ideal world. So every step we took counted and we had to be so careful to not be lazy-footed because if we clipped one crampon on the other we’d have a potentially deadly fall. With every step we took we used the ice axe like a walking stick, digging it into whichever side of the trail was the highest. I was really happy we’d brought them along actually, I felt a lot safer having that extra grip. It didn’t take us long to start sweating so we found a safe spot to stop and de-layer. 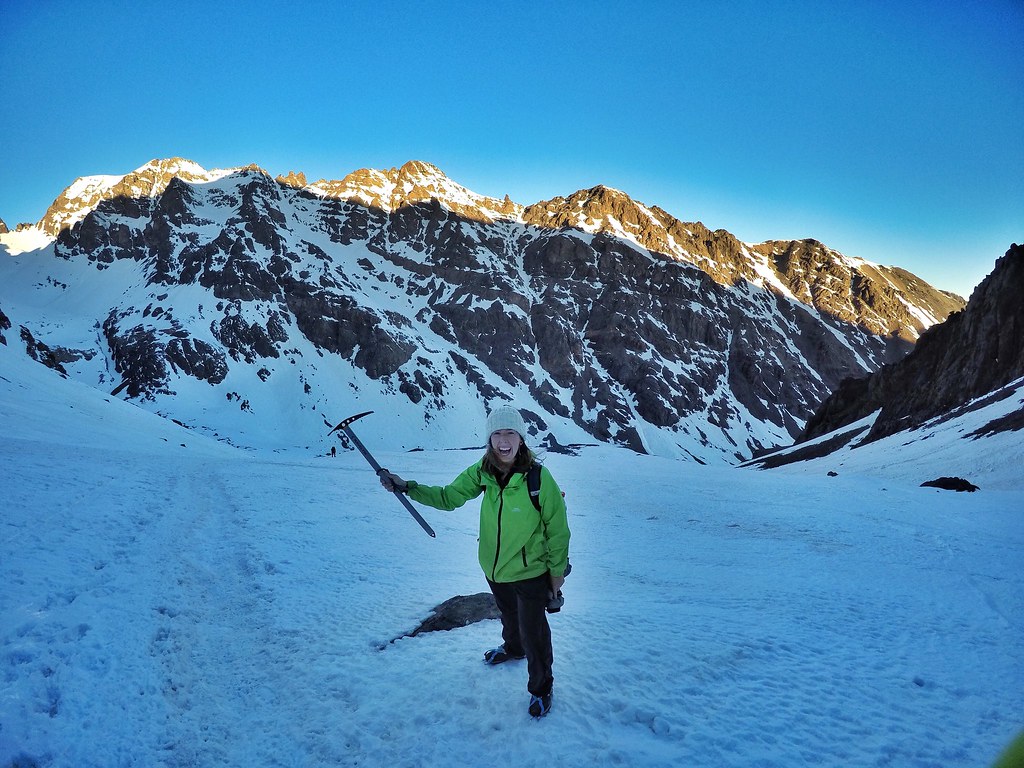 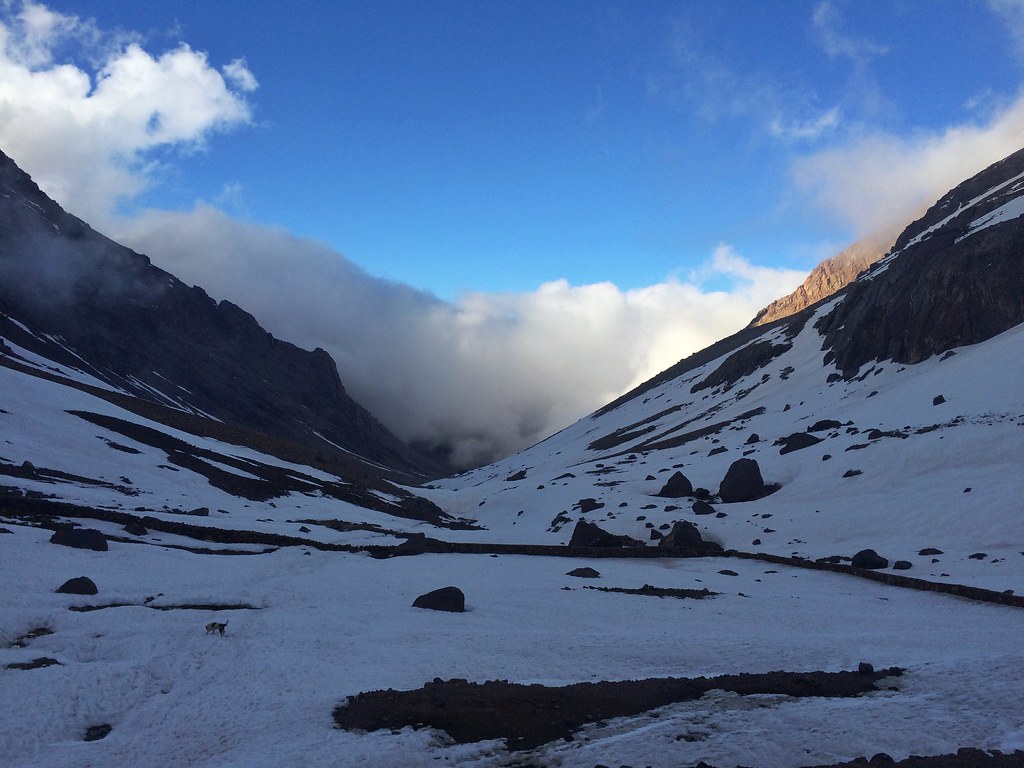 The sun began to kiss the mountain peaks behind us, staining them a fabulous orange colour. We made it over the first pass and then the hike felt a bit like Groundhog Day – we had an almost identical slope to climb up again to another pass. The wind picked up a bit and albeit it wasn’t strong, it made the sweat on our backs turn freezing cold, so we quickly redressed and took a sip of water…only to find our water had begun to freeze!

We hiked at a pretty casual pace and were relived when we finally reached the sun-line! A little further on and we were at the next pass. The views were incredible from here, we rested on a couple of rocks and admired the layers of mountains around us while nibbling on a rock-hard snickers bar and shaking our water bottle to help the ice melt. Finally we got sight of our goal – the ugly metal pyramid atop Jebel Toubkal was visible and we just had a ridge line between us and it. 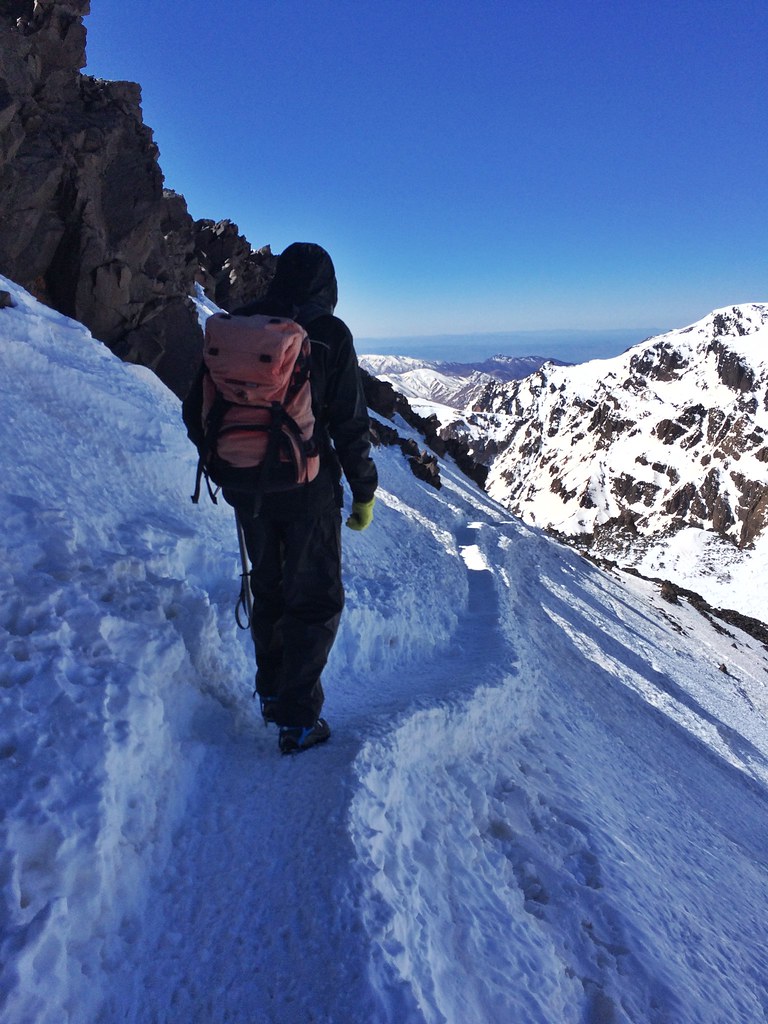 As we began the climb up we passed a Dutch guy who we’d been chatting to in the dorm, he was coming down without his two friends and explained that him and a guy he met had really suffered from vertigo on the final section and had to turn back. This wasn’t what we wanted to hear, and he suggested there was a narrow ridge with a drop-off on either side, so we thanked him for the inspiring talk and continued on to see it for ourselves. There’s no denying that the end section was the scariest, the trail was very narrow, with a couple of short but steep sections and due to it all being in the shade it was more icy than snowy. There was a drop-off to our left and a rocky mound to our right, which meant at times we had nowhere to dig our ice axe into so we were relying solely on our crampons and boy was I thudding my feet into the ground. If we slipped here it would be roughly 500m of sliding down the mountain-side. The pressure was on and we really didn’t want to meet anyone coming the other way and have to perform an awkward over-taking shuffle on an icy ledge. The trail finally widened again and we turned a bend to see the summit just 50 meters ahead of us! We looked at each other with huge grins, we’d conquered the toughest part and the end was so close! 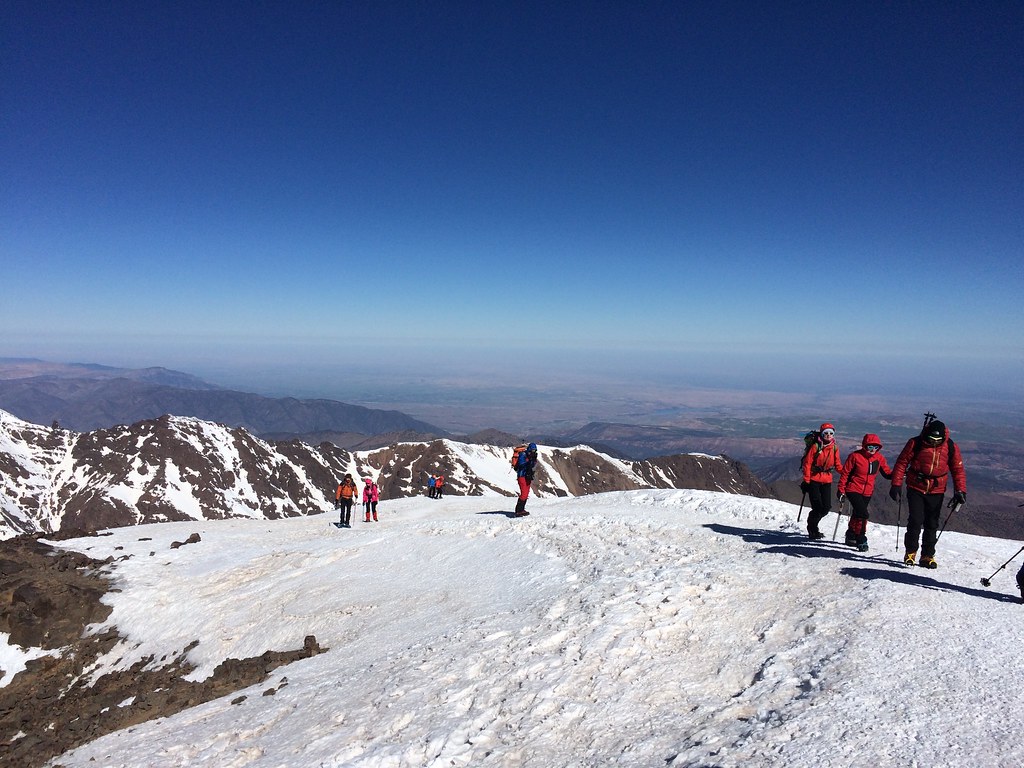 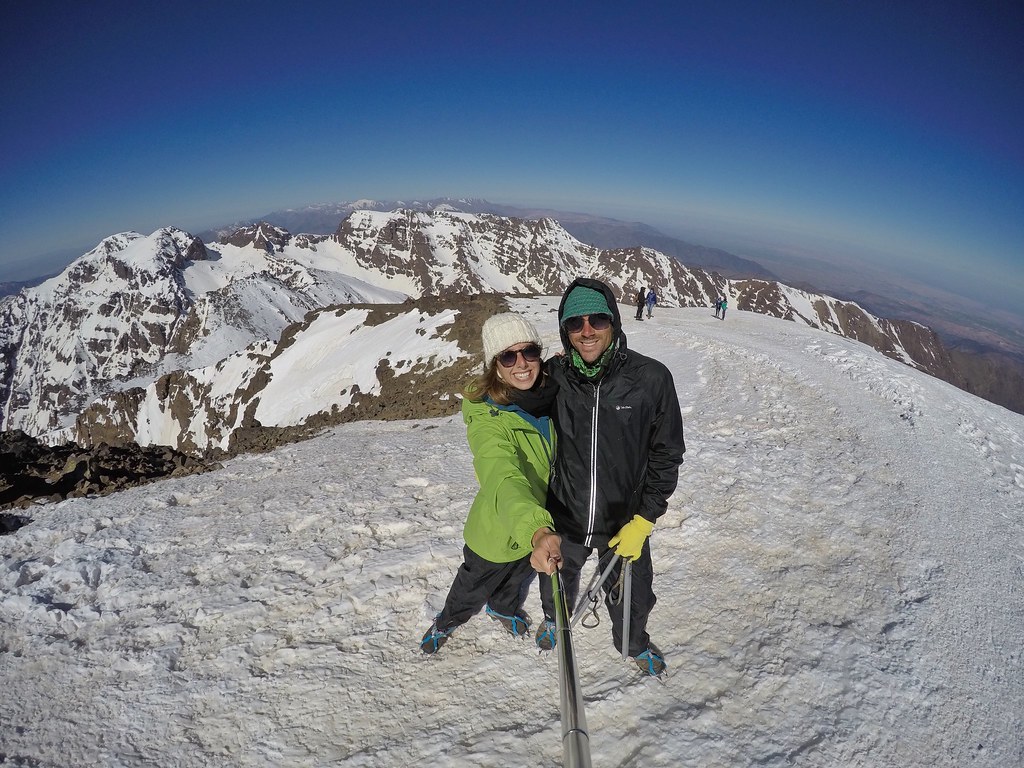 You’ll be happy to know I didn’t do a clumsy Lauren manoeuvre and slip on the flattest section before the end – we did successfully make it to the the summit! At 4167m it’s the highest mountain in North Africa and we felt on top of the world. The views were phenomenal with snowy ridge lines, layered one behind the other until the lower mountains were snow-less in the distance. On one side the mountains just stopped and the flat-land leading to Marrakesh began. 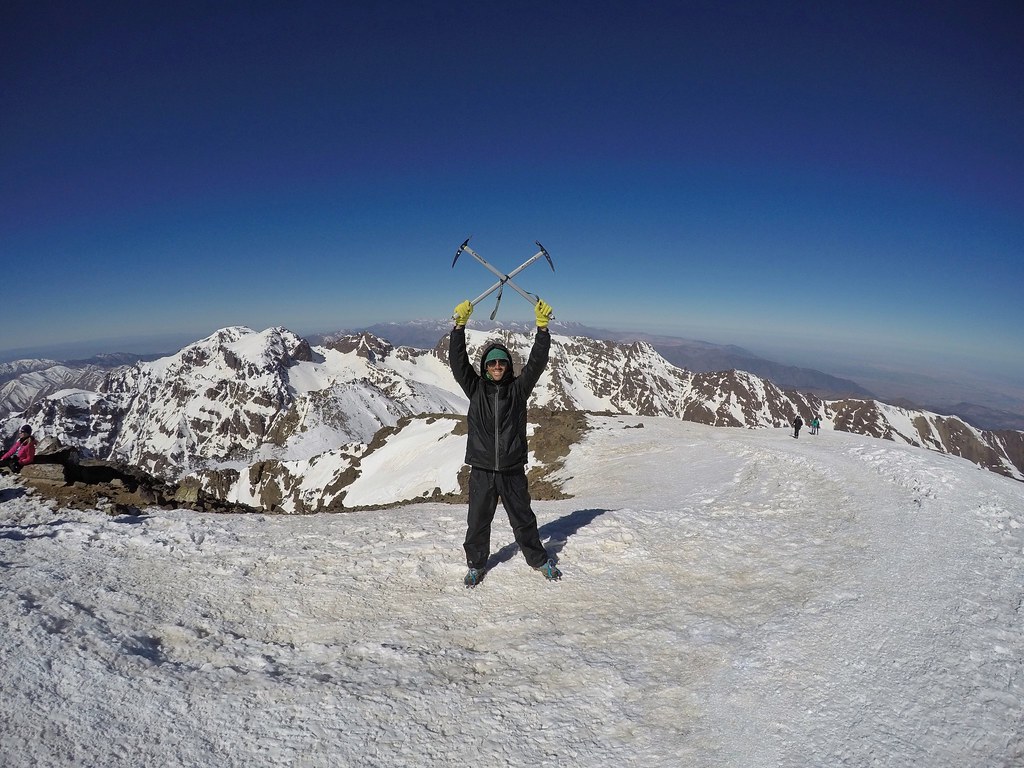 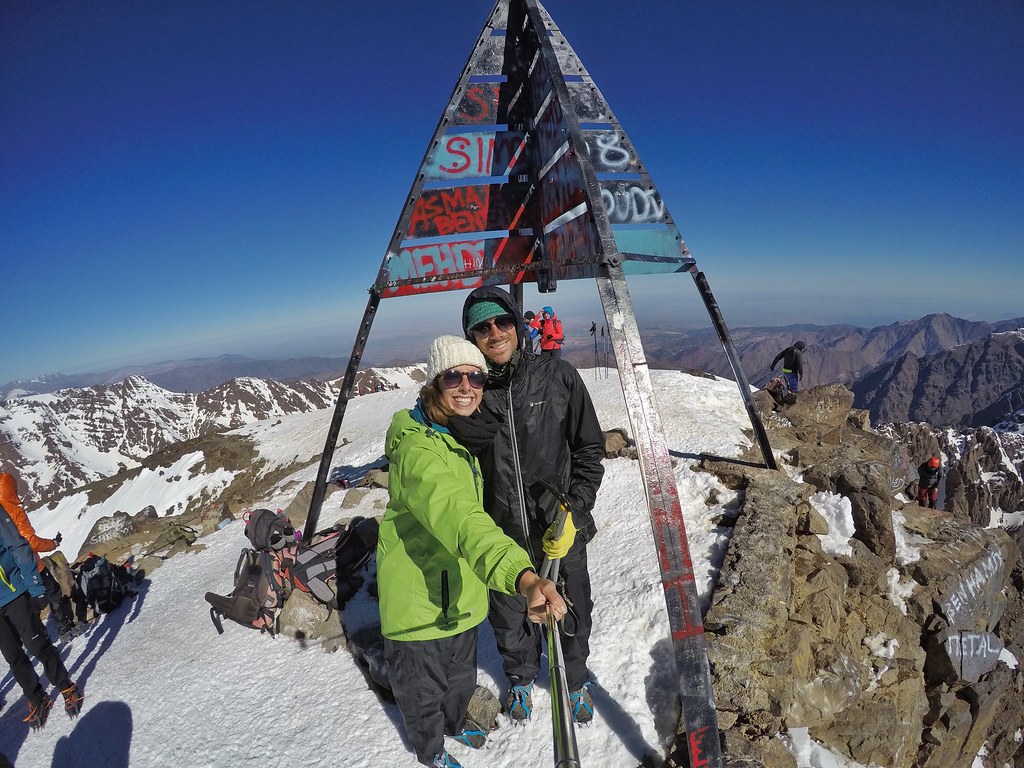 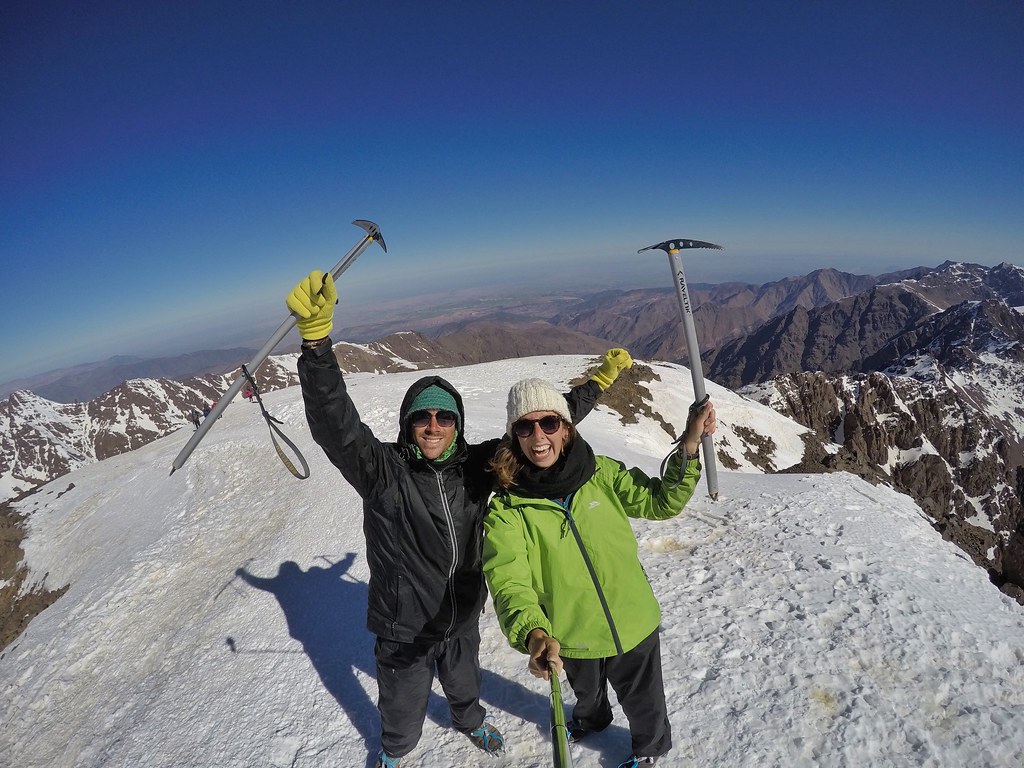 There were a lot of emotional people at the top, we were bloody chuffed to have made it but clearly not as overwhelmed as the people shedding tears. We hadn’t been this high up since we hiked the Himalayas and I forgot how amazing it was looking down on the mountains all around us. We had a snack at the summit, took some photos of us with our trusty axes and then it was time to begin the hike back down. After climbing almost 1000m elevation this morning we now had to hike another 2500m back to Imlil. It wasn’t going to be easy, walking in crampons added extra weight to our feet and really slowed us down. 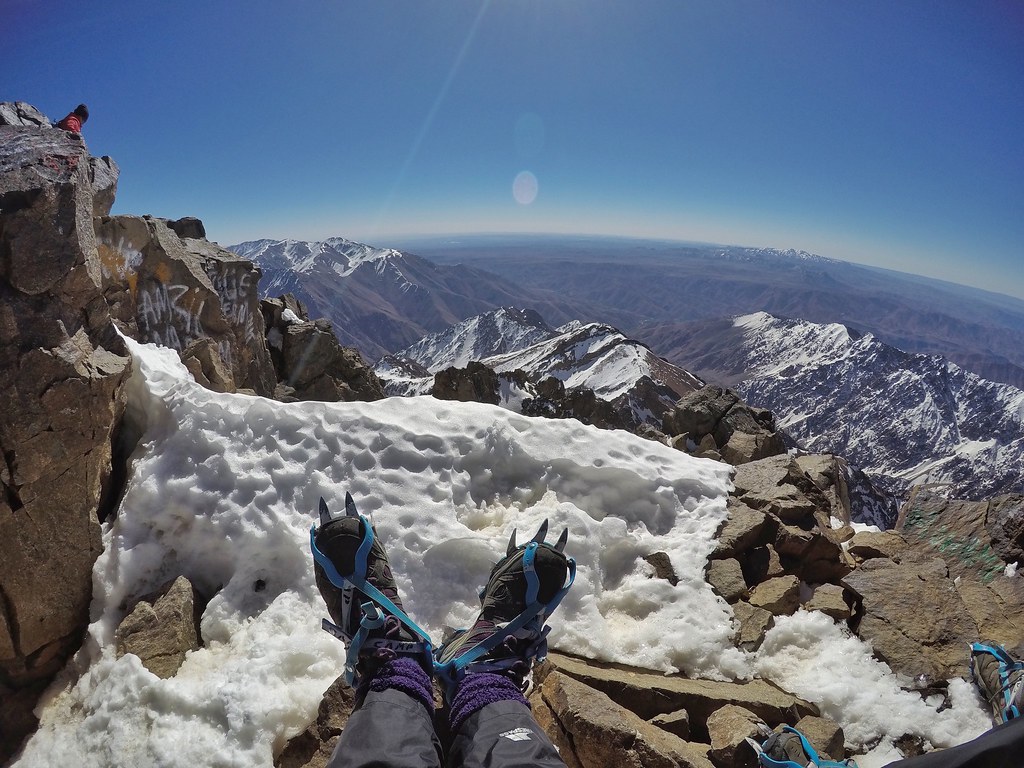 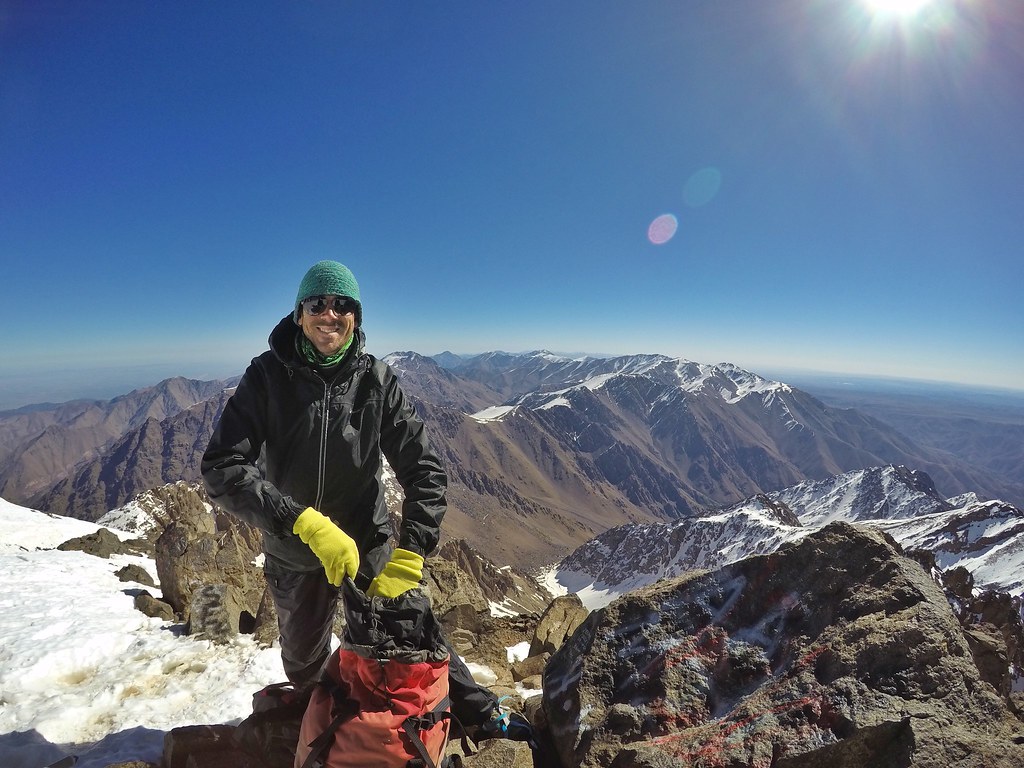 Somehow my legs just kept going but occasionally an ankle would give way and wobble like a model walking a catwalk in platform shoes. We ate our lunch of stale bread and cheese back at the refuge and left a note for Chris and David to notify them that we’d survived and then with extremely sore hips we plodded on down the valley. When we got back in contact with them a few days later they told us that a girl had tried sliding down the snow on her bum to save her legs the walk, but she clipped a crampon on the snow and her ankle broke! So Chris and David got their uni lads to group together, making a splint and stretcher and carrying her down the mountain to the mules! 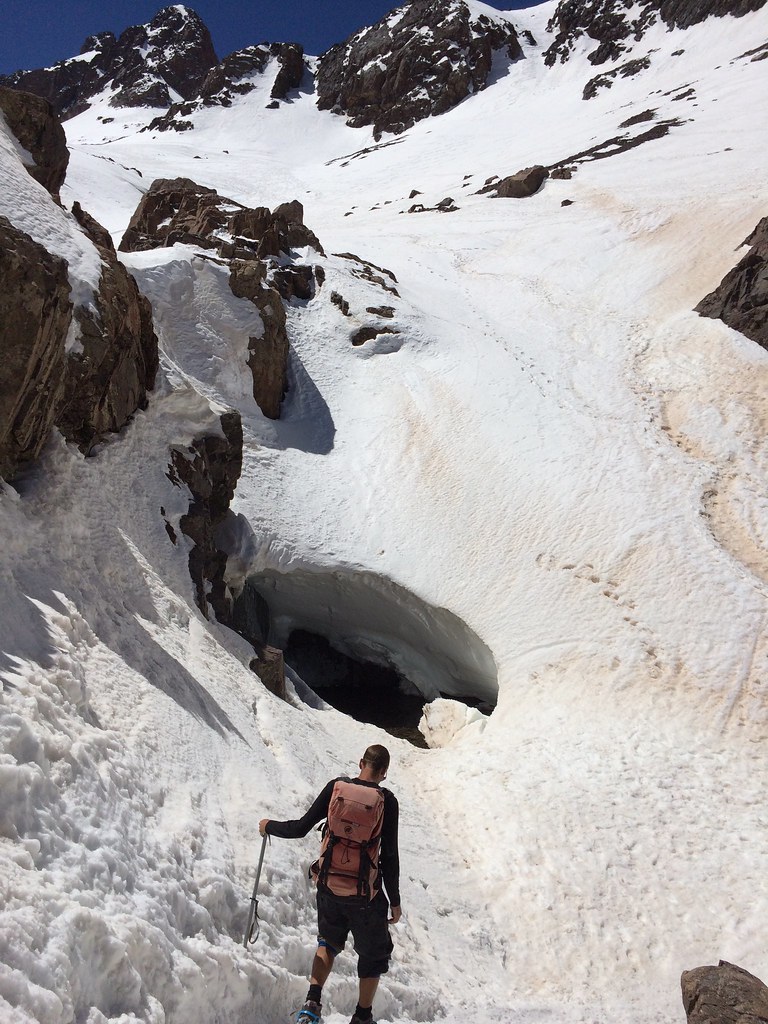 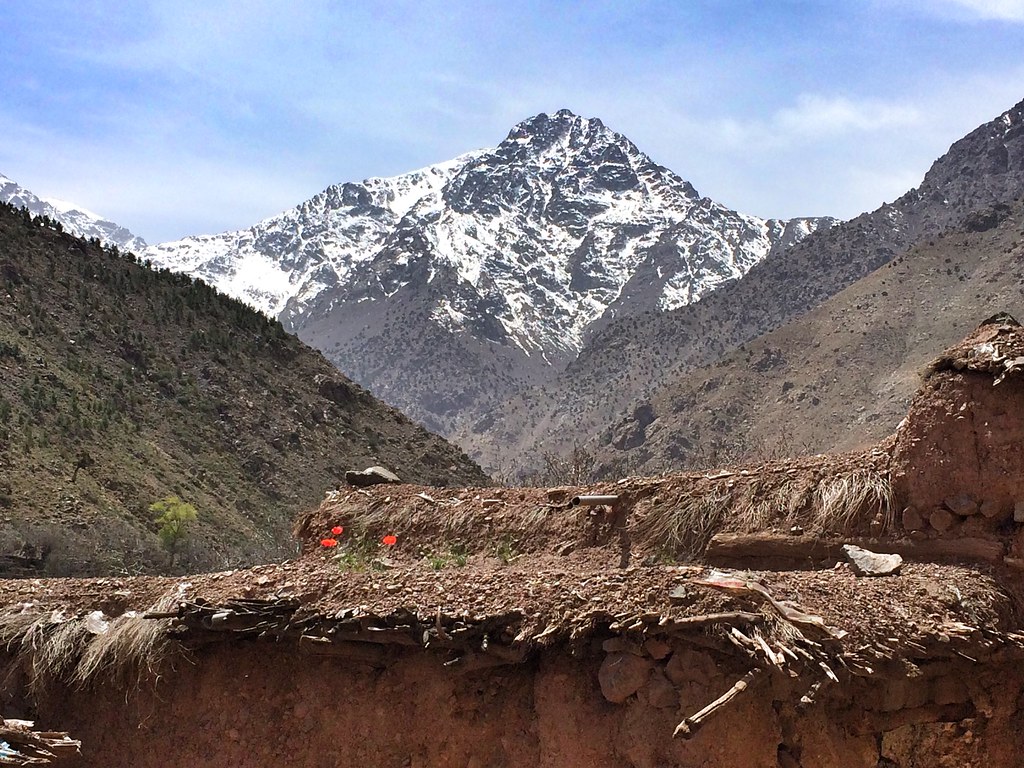 We ended up walking 11 hours that day and it was absolutely gruelling! Once back in Imlil we had to drop our gear back to the rental shop and then do the long hike to our hotel. My body has never been as stiff as it was the next morning, in fact for the next three days I was shuffling up and down the steps like an old lady. We ended up spending our final day in Imlil like couch potatoes just enjoying the mountain views. We did manage a 10 minute stroll around the village and met some adorable lambs and friendly Berber ladies before heading straight back for a day of sipping mint tea on the terrace. 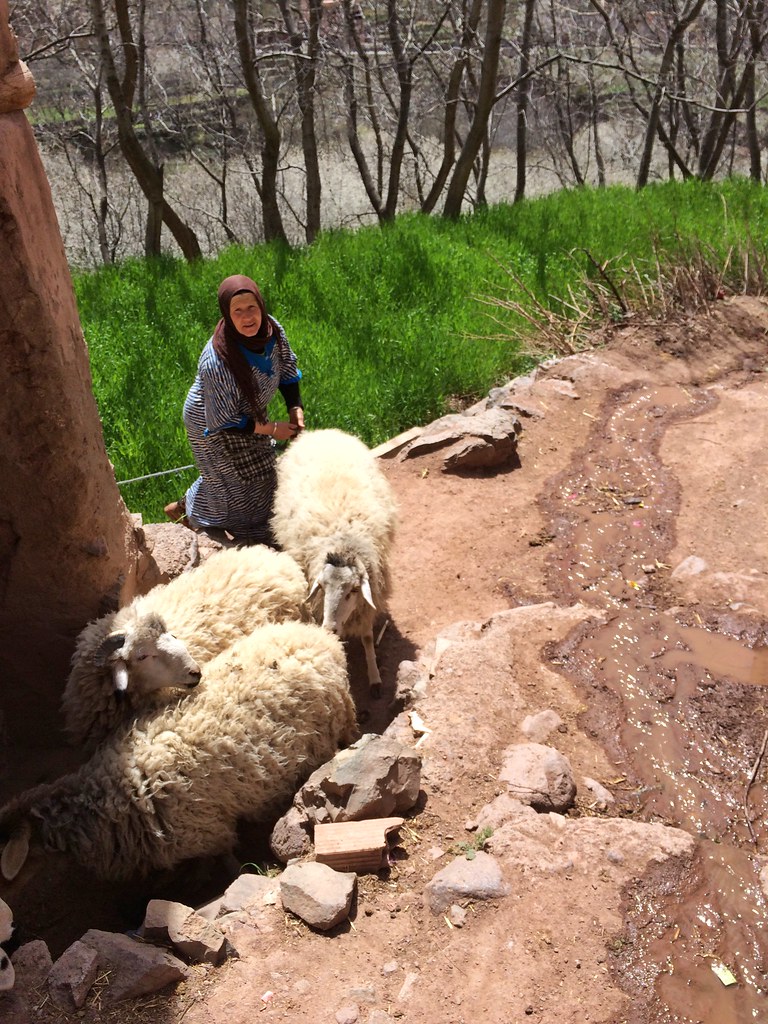 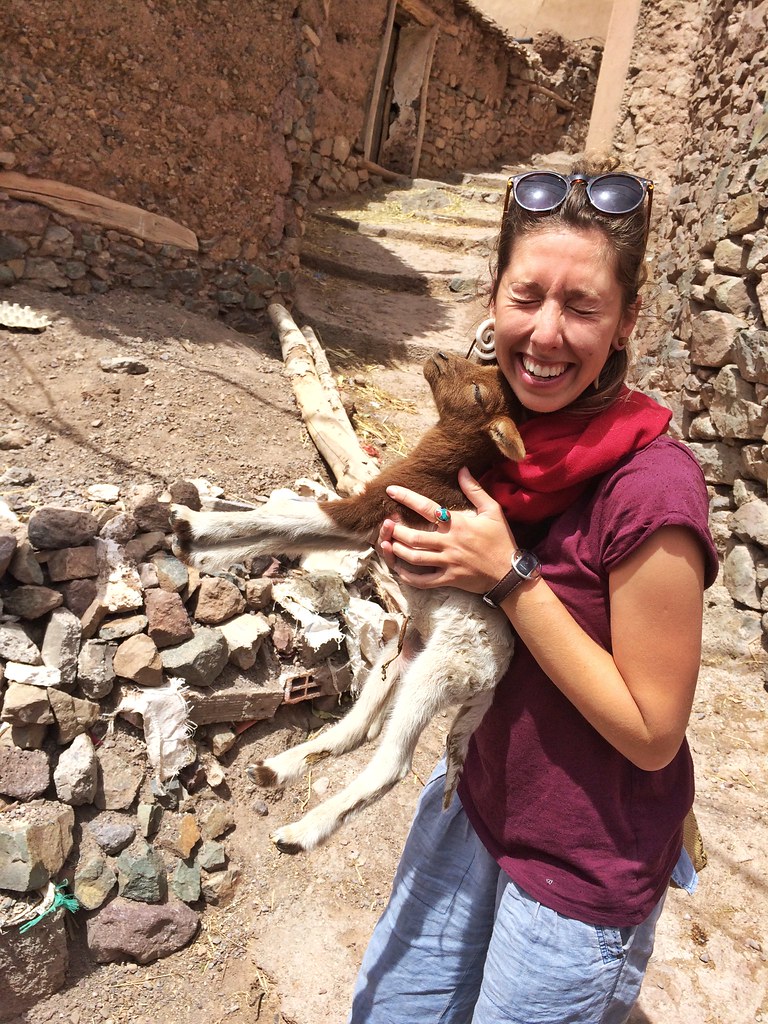