It was supposed to be an easy day travelling from Essaouira on the coast to Setti Fatma in the High Atlas Mountains…but things didn’t go quite to plan. We walked like snails with our heavy backpacks through the quiet medina which was being swept and shutters slowly opened for another day of business. There were shared taxis everywhere, yet none of them were going to the most likely destination – Marrakesh. It was bizarre but we waited a while expecting one to turn up, listening to the workers in fluorescent vests calling out all the destinations in Morocco except goddam Marrakesh. The bus station was opposite and albeit we knew there were no CTM buses around that hour, we figured we should check out the times for local buses. Turns out we’d just missed one which was a pain, but another was leaving in 45 minutes and eventually we set off for Marrakesh. Half way through the journey the bus stopped for 30 minutes and everyone stayed on board, unaware that the driver had casually gone for breakfast. I saw a quote somewhere saying ‘Europeans have the watches, Moroccan’s have the time’ which I thought was rather applicable!

If we had a car it would of taken about 3 hours to reach our end goal of Setti Fatma, yet it took us 4 hours just to reach Marrakesh. Then we had to hail a taxi and ask for the meter to be put on, which took almost 10 tries but eventually one guy agreed and we went to the grand taxi stand for southerly destinations. It was already 3pm and didn’t look very promising as no-one else was waiting for a taxi, I guess we were too late in the day. I headed round the corner to the Alsa bus stop where I found a regular bus to Ourika, which was a big chunk of the journey, so we opted for that. A very friendly local who lived in France befriended us on the busy bus. His English was superb and he was ever so sweet, getting us off at the right stop and making sure the grand taxi from Ourika to Setti Fatma charged us the local price, which was just €1 each for the 40 minute journey. A brand new squatter toilet was piled into the back with our bags while we waited nervously inside the taxi as the handbrake clearly didn’t work, so every time they tried to squeeze more into the boot we’d roll forward and the driver would run ahead and push us back!

In the end it took 8 hours to reach our final destination and we were exhausted. Thankfully we arrived in a little spot or paradise at the French owned Au Bord De I’Eau. It was set beside the river and had spotlessly clean rooms. We went straight out for dinner and the village was an absolute ghost town. Setti Fatma is a really popular day trip from Marrakesh as its much cooler and just 45 minute drive (call it two hours if you travel Lauren and Craig style). But it seemed that everyone visits just for the day, so it was actually really lovely being in the village without any other tourists. We had to go against all our rules of only eating in busy restaurants as no one was there to even eat! We had the standard uneventful tagine (seriously fed up with them now after two months) and seeing as we didn’t get the shits we ended up eating there for the next 3 nights.

For the first time in Morocco our hotel had radiators which was a relief as it was freezing cold outside due to us being at around 1400m elevation. The next day’s weather was just as cloudy as the evening we arrived and the hotel owner warned us in French (mainly exaggerated hand gestures) that a storm was coming. She insisted on a free upgrade into a room with private bathroom and better heating as the weather was due to drop over night and snow was predicted. She also recommended a nice lesser known walk in the area which we loved. We followed a track up a nearby valley which was filled with almond trees covered in white blossoms. On the side of the valley walls were occasional mud brick Berber villages. We passed some very smiley locals dressed in colourful outfits, bandanas on their heads and the typical Berber tattoo which is a line down the chin. Shepherds moved herds of sheep or goats through the valley to green bushes which excited the little ones and had them bouncing with joy like they were jumping on a trampoline. We got a brief glimpse of a slightly snow capped peak before cloud swept over it again. The hike was fun and involved jumping over streams and hopping across rocks until we reached a dirt road. This was the point where we looped back via a higher route along the valley. It was a really quiet area and we were the only tourists hiking there, which was a pleasant surprise as I was worried Setti Fatma would be too overcrowded for us. 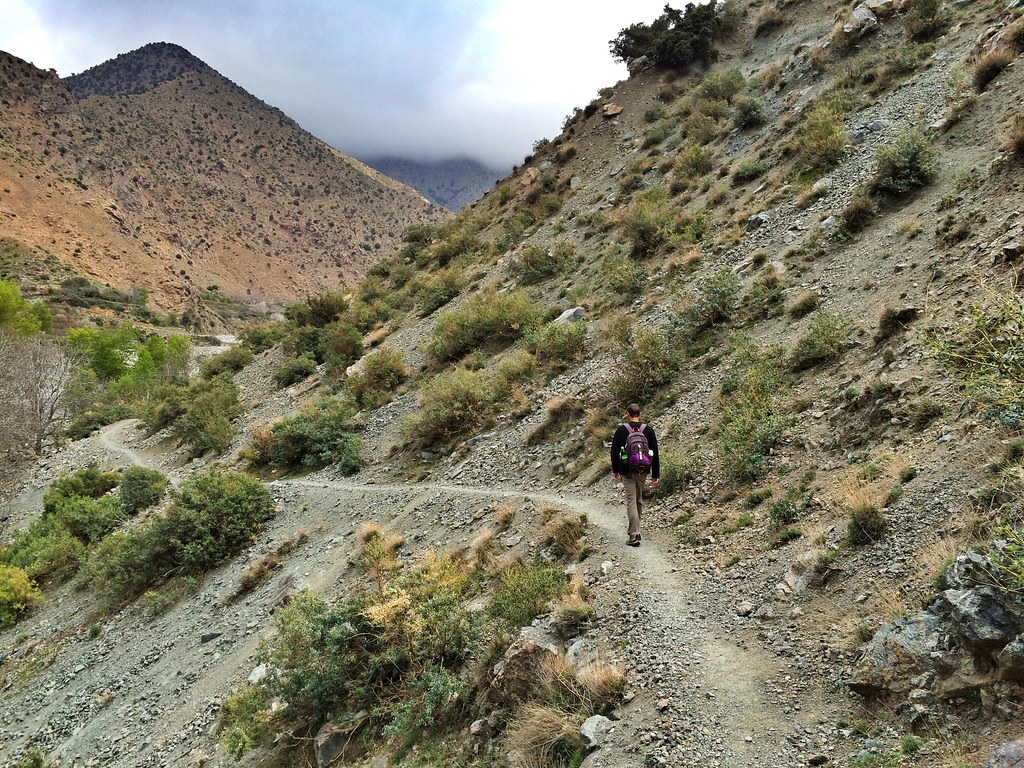 The night was bitterly cold even with the radiators on and a duvet, but the bad weather had been and gone overnight and we woke to crisp blue skies. We stepped out of our room where the river gushed just 30m infront of us and finally got a view of the snowy scenery around us. We couldn’t wait to head out on another hike and today we were going to check out the waterfalls which the area is best known for. To reach the falls we had to walk alongside the clear river that was narrow and rapidy. Every restaurant had extended their establishment alongside the river, and they’d all clearly bought their furniture from the same supplier. It was a funny look with really retro ‘L’ shape sofas in psychedelic colours right beside the raging waters. A village further up the Ourika Valley got totally wiped out by a flash flood a few years back, yet they’ve still rebuilt the place with riverside dining. 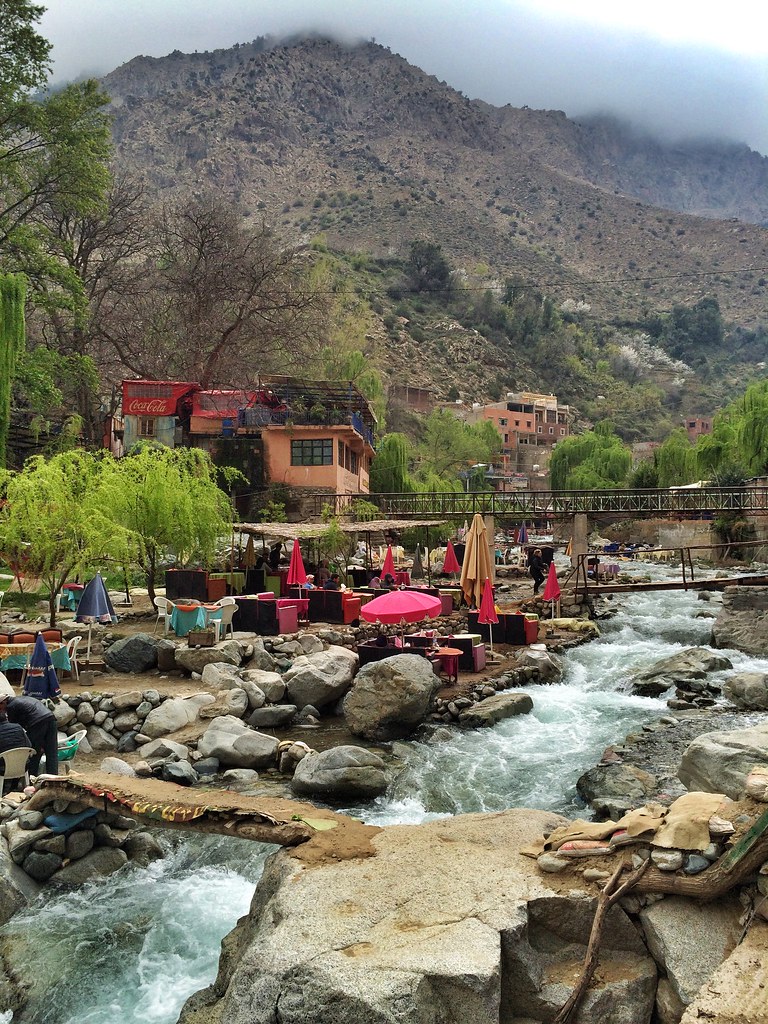 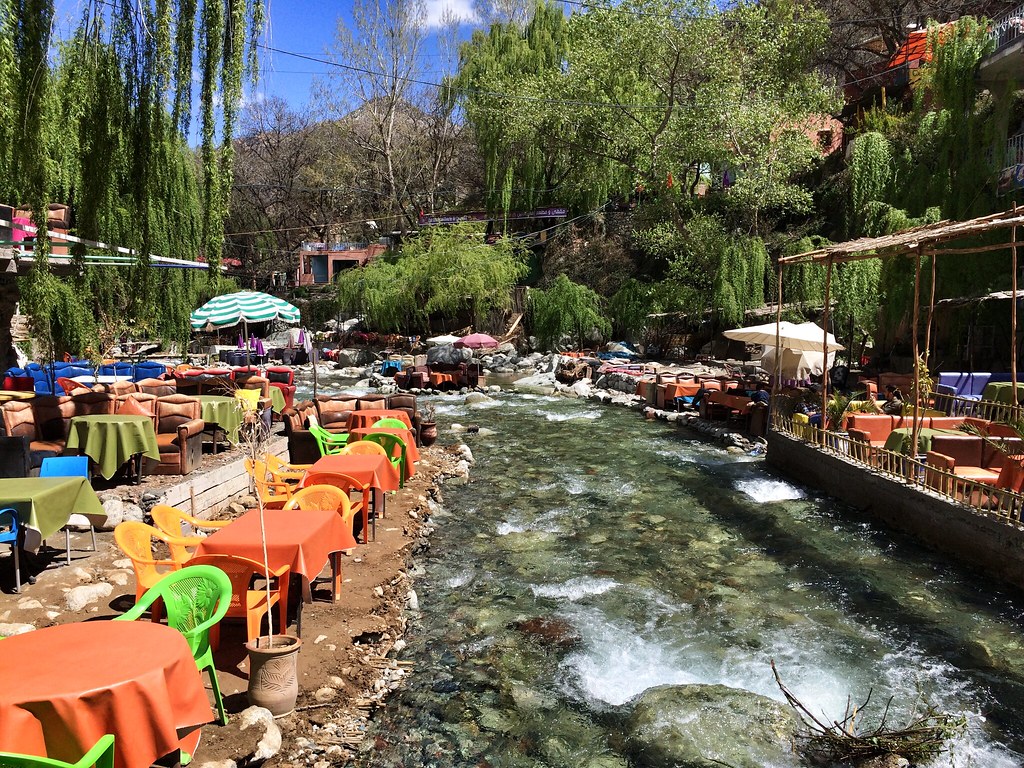 There were two routes to the waterfalls and we took the high one that looked down on the falls. The waterfalls weren’t anything special, unless it was the first waterfalls you’d ever seen. But we climbed high up until we reached a dead end. We tried to scale a steep area and both chickened out. One cool thing about continuing onto here though was that we spotted a group of Barbary Apes. They looked just like the common macaque monkeys we’ve seen in Asia but this breed is actually endangered. It was nice to see them roaming up the mountainside and running away from us as appose to them being accustomed to humans and idiots feeding them. A baby monkey actually knocked a rock down a rock ledge which missed me by less than a meter! 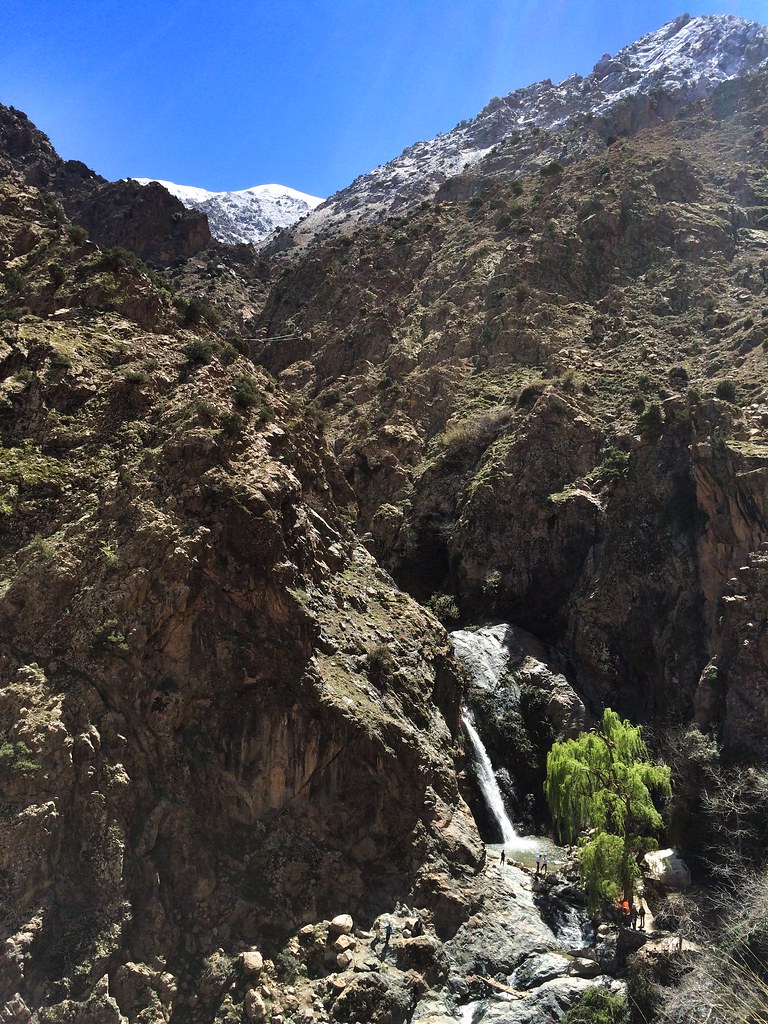 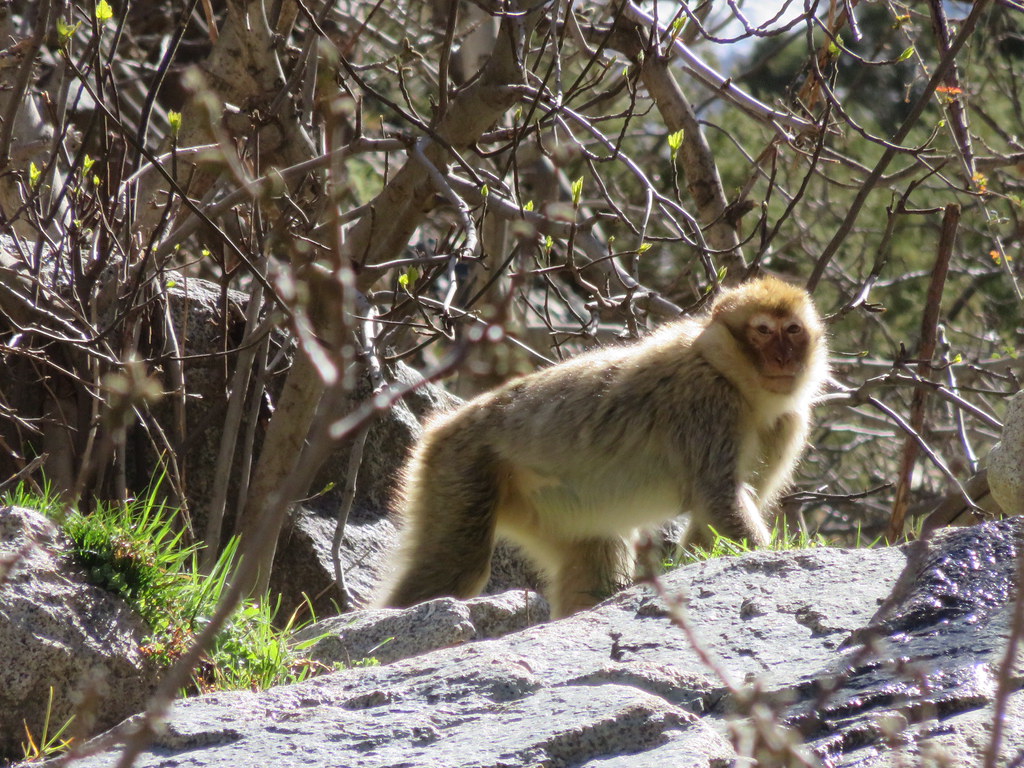 From the high trail we got some great views of the surrounding mountains all caked in fresh snow after the nights storm. We wandered back along the river where the restaurants were getting their first customers of the day. Waiters had to frantically run across the rickety wooden bridges with hot tagines in their hands and freshly squeezed juices for the customers relaxing by the cool river. 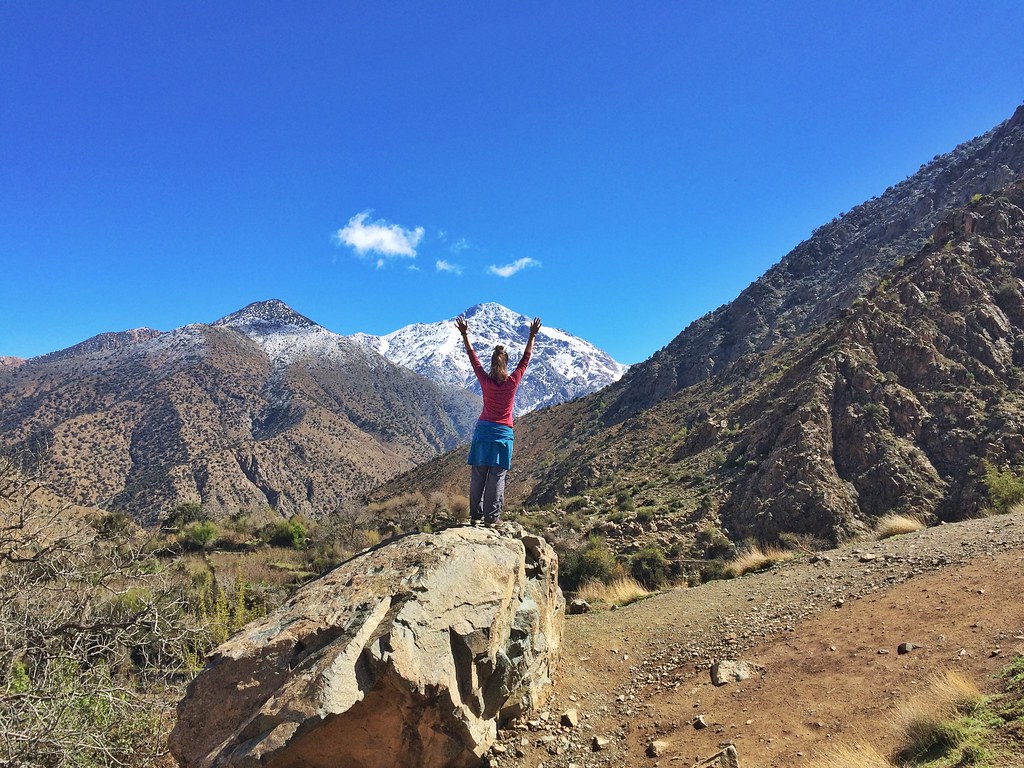 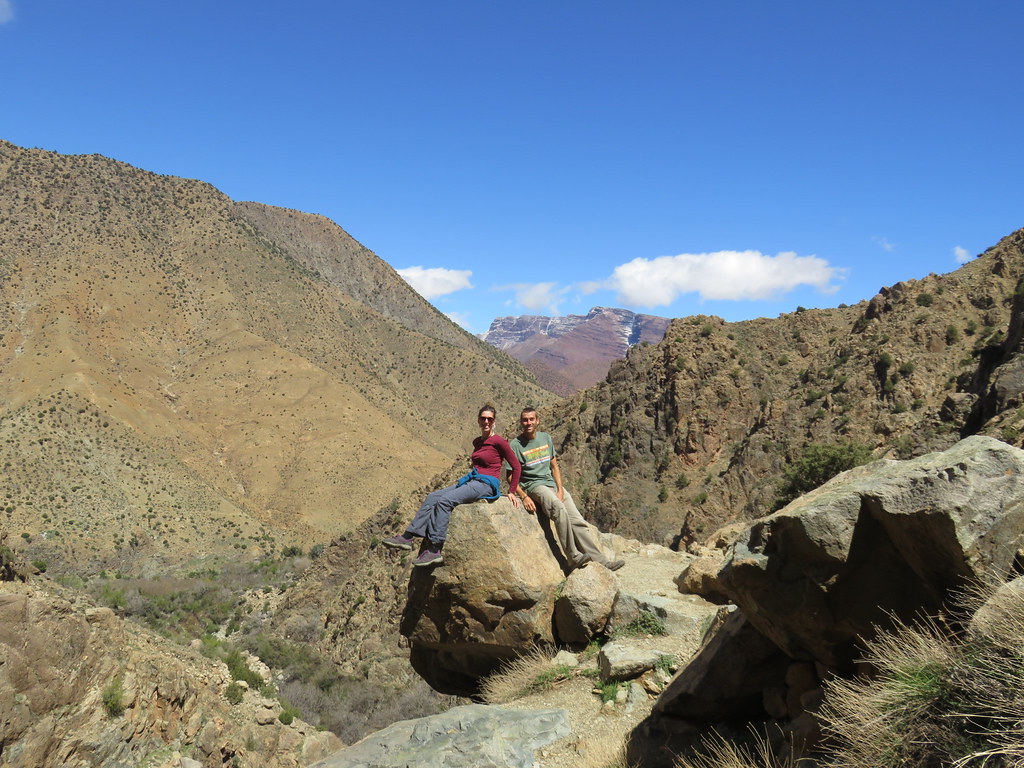 We were gutted we didn’t get a decent view of the mountains up the valley yesterday so we headed back and took a really steep route to gain altitude quickly. We made it there just in time before the clouds rolled back in. Boy does the weather change quickly in the mountains! Now that we’ve had a little taste of the mountains, it’s time to head to Imlil where we’ll attempt to climb up north Africa’s highest mountain. 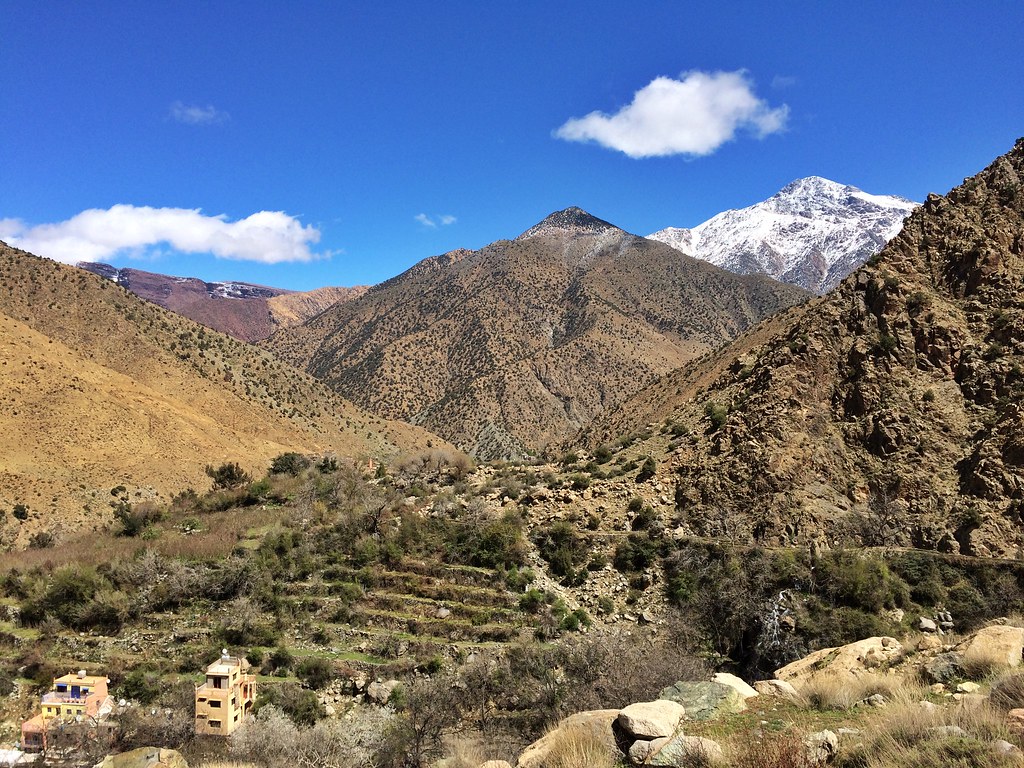 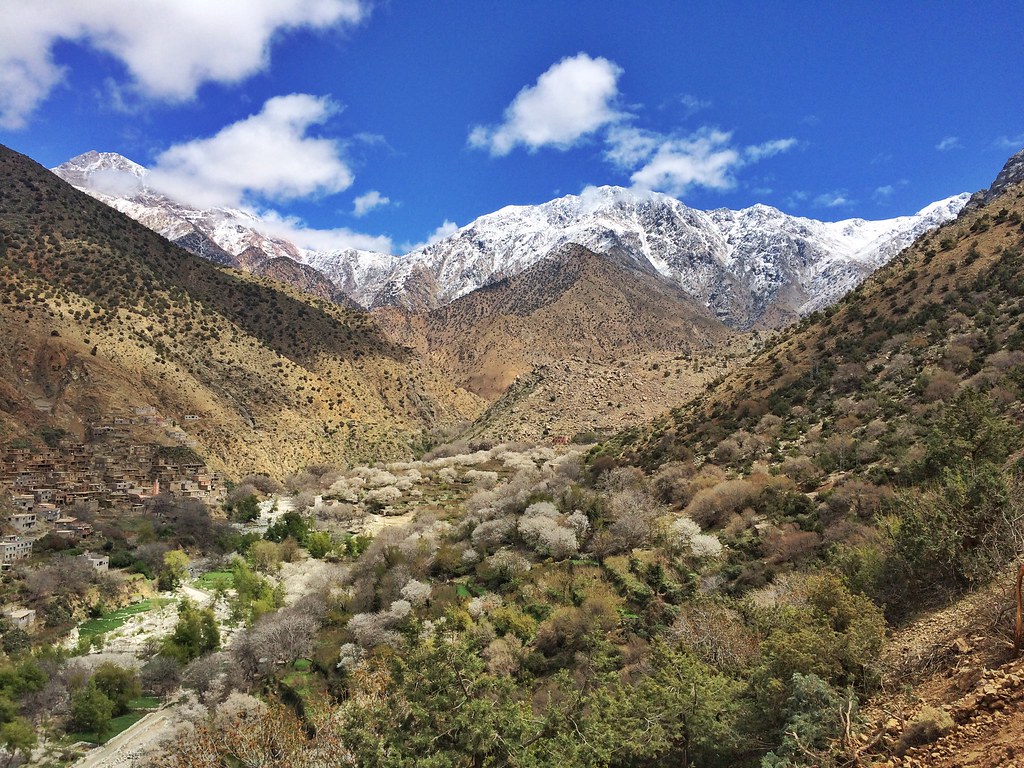 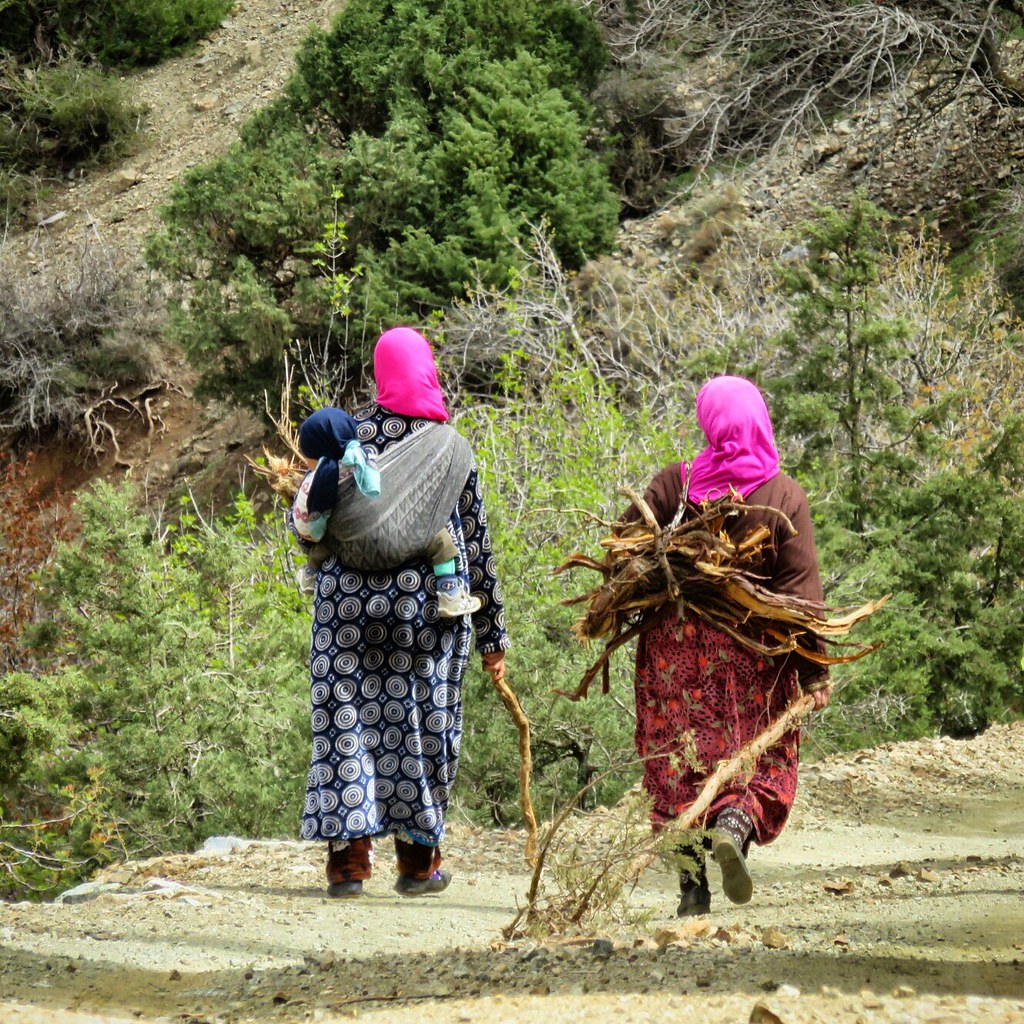