We ventured through the winding alleys of the medina until we arrived at Essaouira’s famous fishing port. From there we had a view of the rampart walls surrounding the medina with one side being lashed by the Atlantic. There were little blue row-boats all moored up together and bobbing in the murky water, while other boats were on land and filled with fishing nets. I found a nice one for a photo, so I hopped onto the edge and then I saw a man was asleep inside the boat…he didn’t even notice me there! 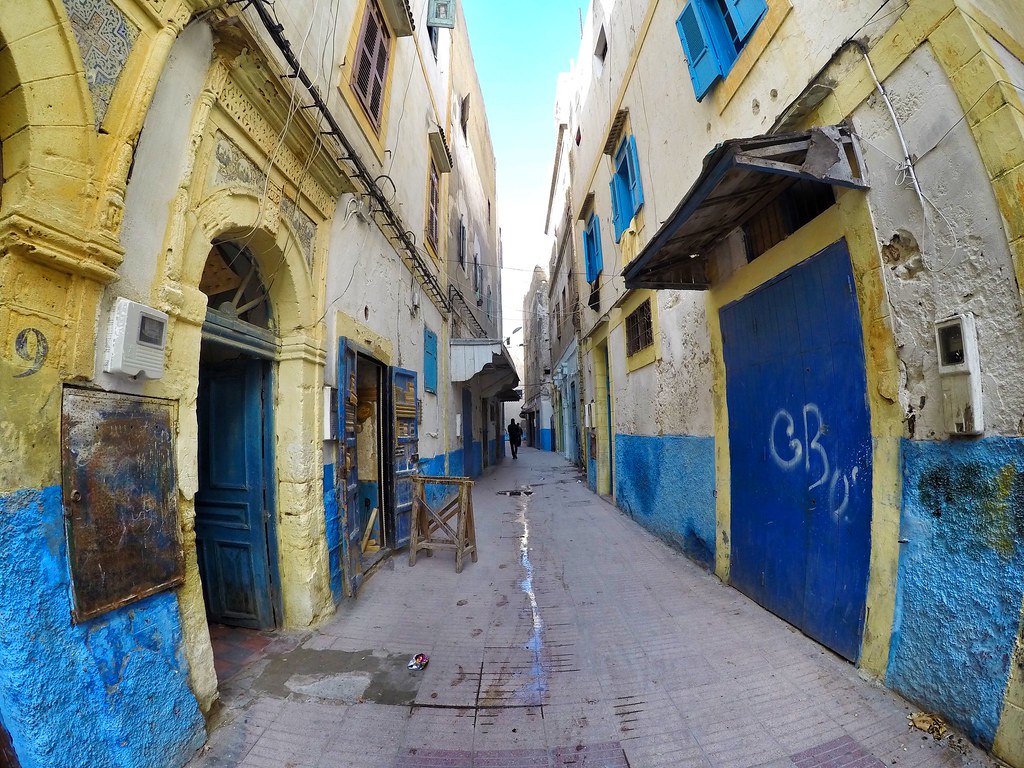 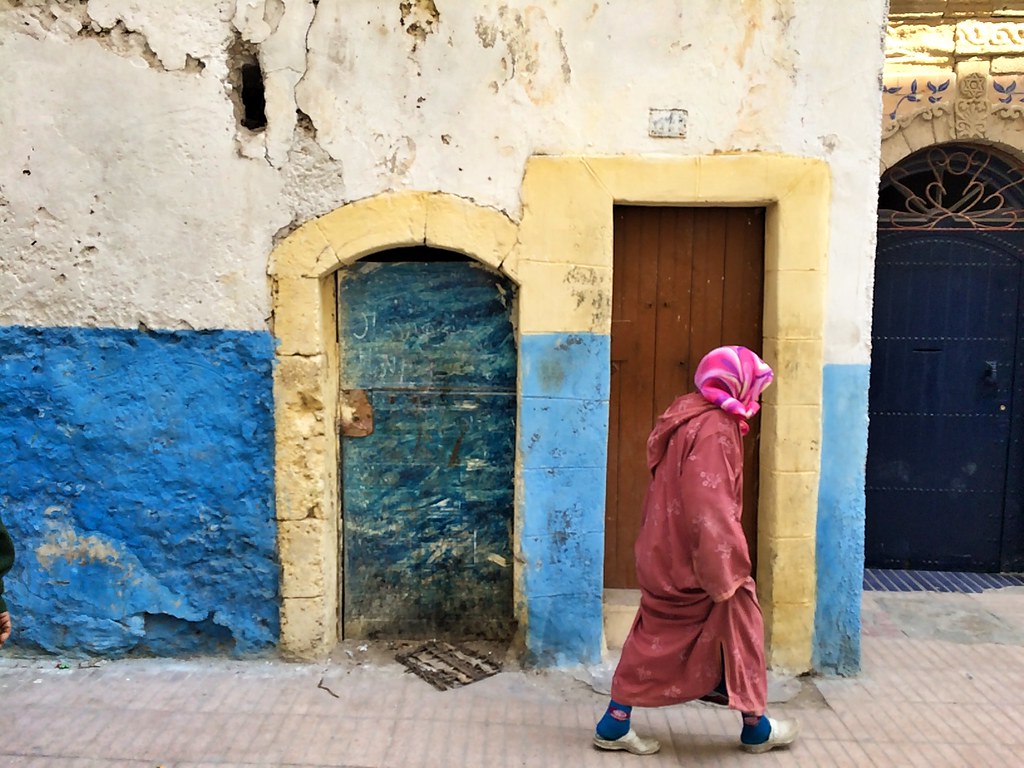 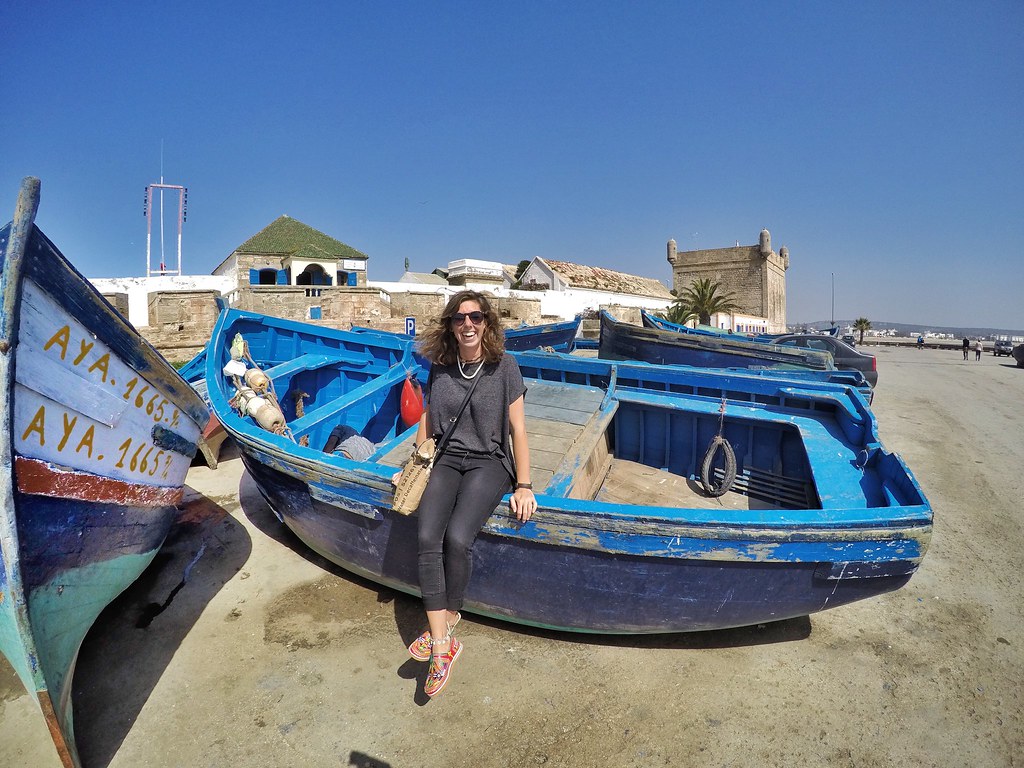 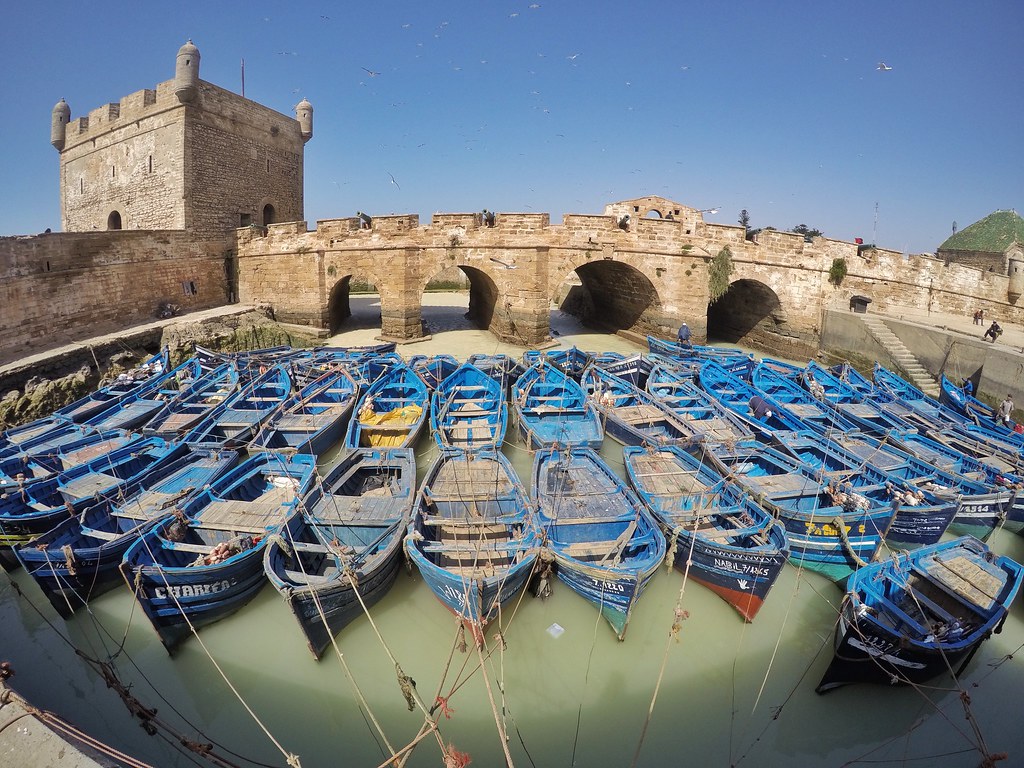 Seagulls ruled the area and as we wandered through the fish market they swooped over our heads like a group of spitfires. Some sellers just had one or two fish for sale while others had tables filled with eels, small sharks, stingrays and crabs. They were all items I wasn’t really aware Moroccans ate, would they make an eel tagine? I managed to get some photos of Craig and I being surrounded by the gulls and I was relieved that I did so without being pooped on…unlike some other unfortunate tourists. Later in the day we were strolling through the medina when a group of birds flew through the alley above us and all projectile pooped in unison. We stood dead still and assessed the situation – there were little splats of green poo on the ground but somehow they seemed to have all avoided us like we were protected by an invisible shield. We both started laughing “Wow Craig! That was so close, haha, it all missed us!” I stuck my arm out to high five him and he just looked me up and down and said “Lauren, you have poo on your breast, thigh and foot.” 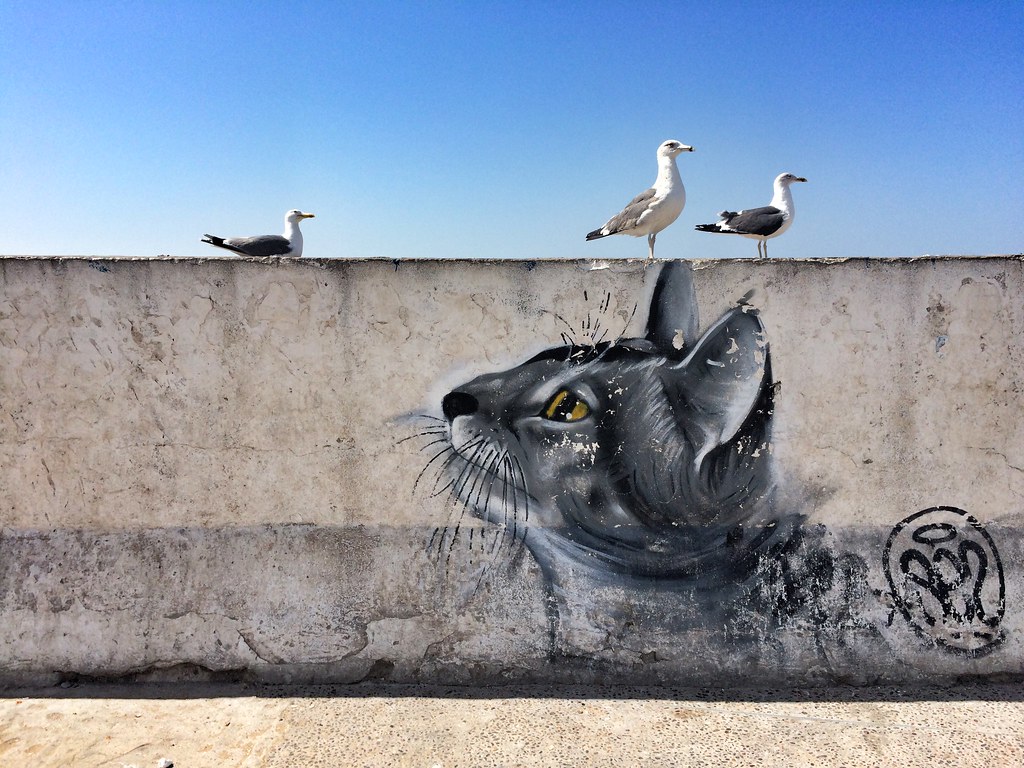 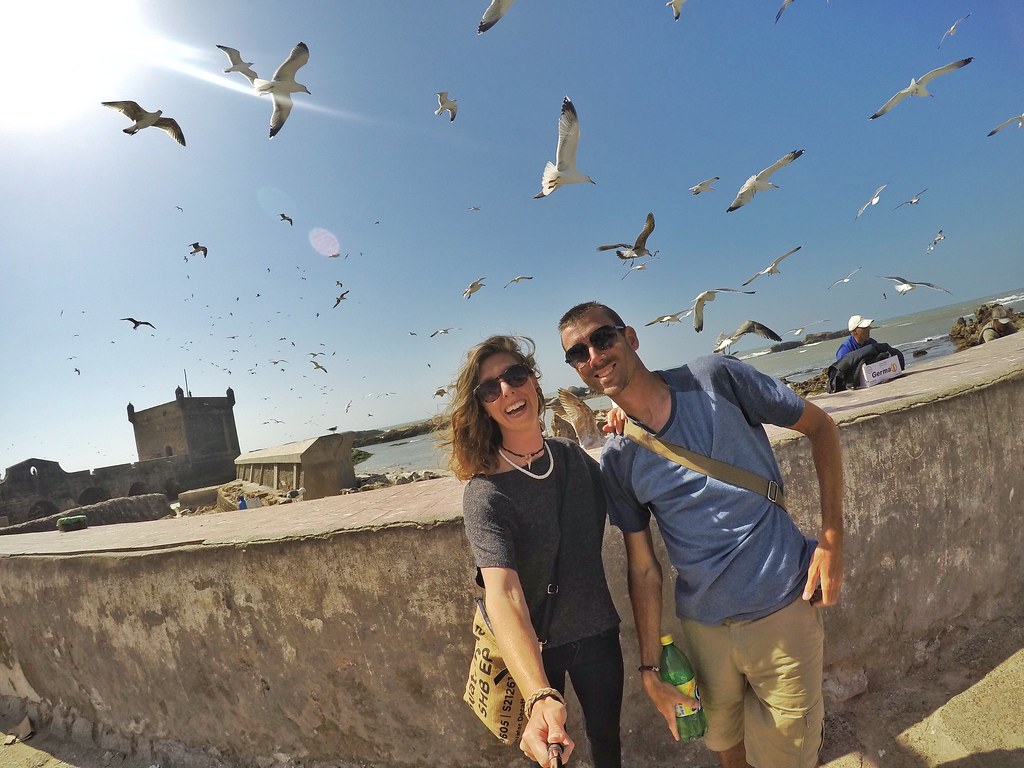 Once I cleaned the worst of it up we continued our stroll through the lanes. Almost every shop sold some sort of item for tourists; from leather bags and woven sandals to Amlou (peanut butter) and Argan Oil. Argan is a big seller round here as its prime habitat for the trees where the Argan fruit grows. Local ladies feed the fruit to goats (or sometimes you’ll actually see the goats climbing up the trees themselves) who’s digestive juices dissolve the shell. The ladies then have the delightful job of recovering the nuts from the goat dung, then splitting, roasting, pulping and pressing the kernels. It takes 30kg of nuts and 15 hours labour to make just one litre of Argan oil, hence its expensive price tag. So everytime we walked past a row of Argan shops I’d have my arms smothered in the oil and I’d spend the next hour or two telling Craig how soft my skin felt until he gave in and let me buy some. The alleys were filled with souvenir shops and we were surprised to see so many tourists. Saying that Essaouira could be even busier if it wasn’t for the strong winds it receives. It’s known as the Wind City of Africa and because of this the beaches aren’t good for sunbathing unless you enjoy being battered by horizontal sand. 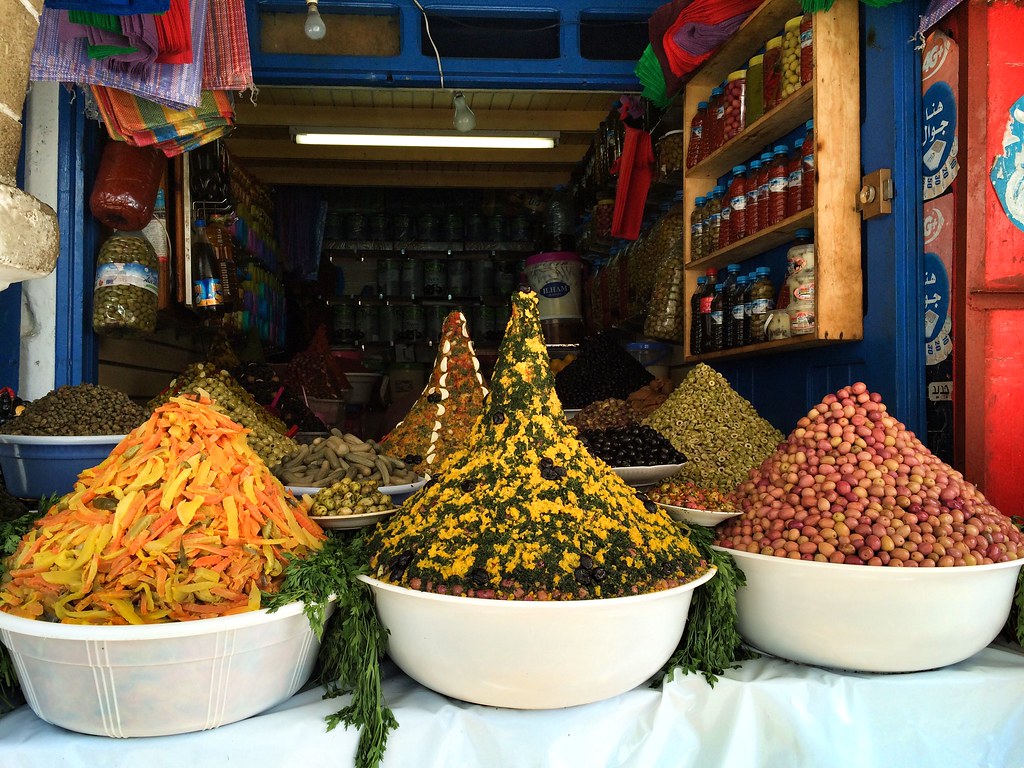 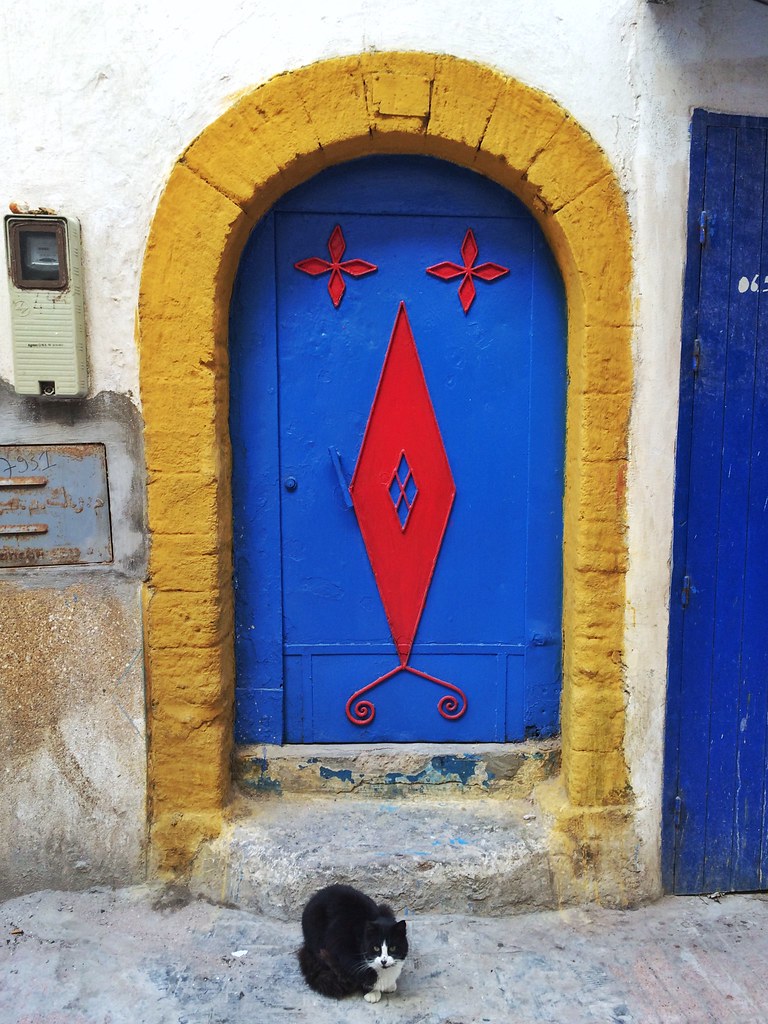 There wasn’t any major sights in Essaouira so we mainly strolled around the pretty medina and enjoyed the beautiful sunsets. The narrow alleys had doors painted blue and yellow and cats ruled the town. It was funny because all the cats in Essaouira were massive, like Pumas, while the stray dogs were little sausage dogs. After nearly two weeks exploring Moroccos coastline it’s time for us to head to the Atlas Mountains and we can’t wait! 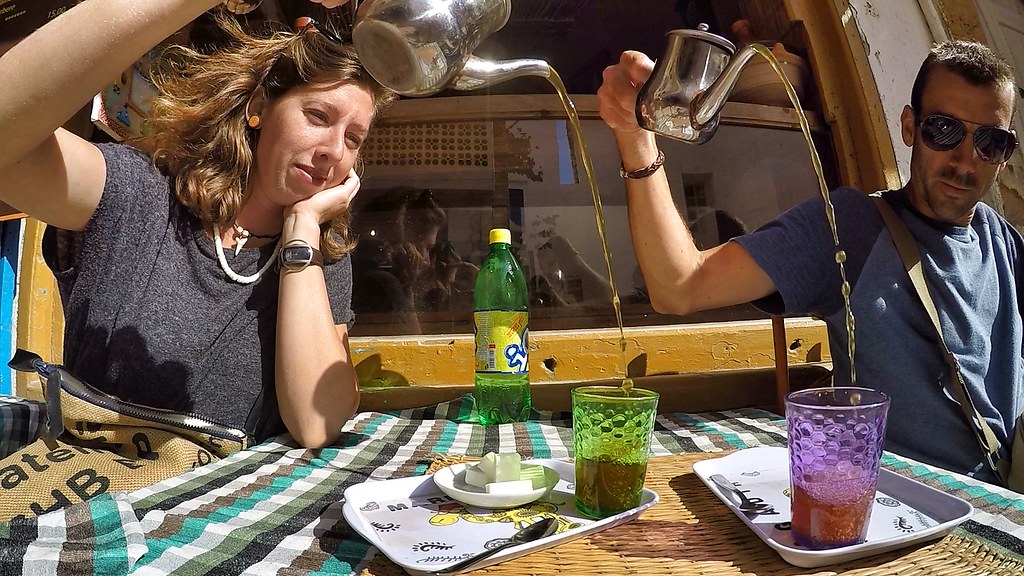 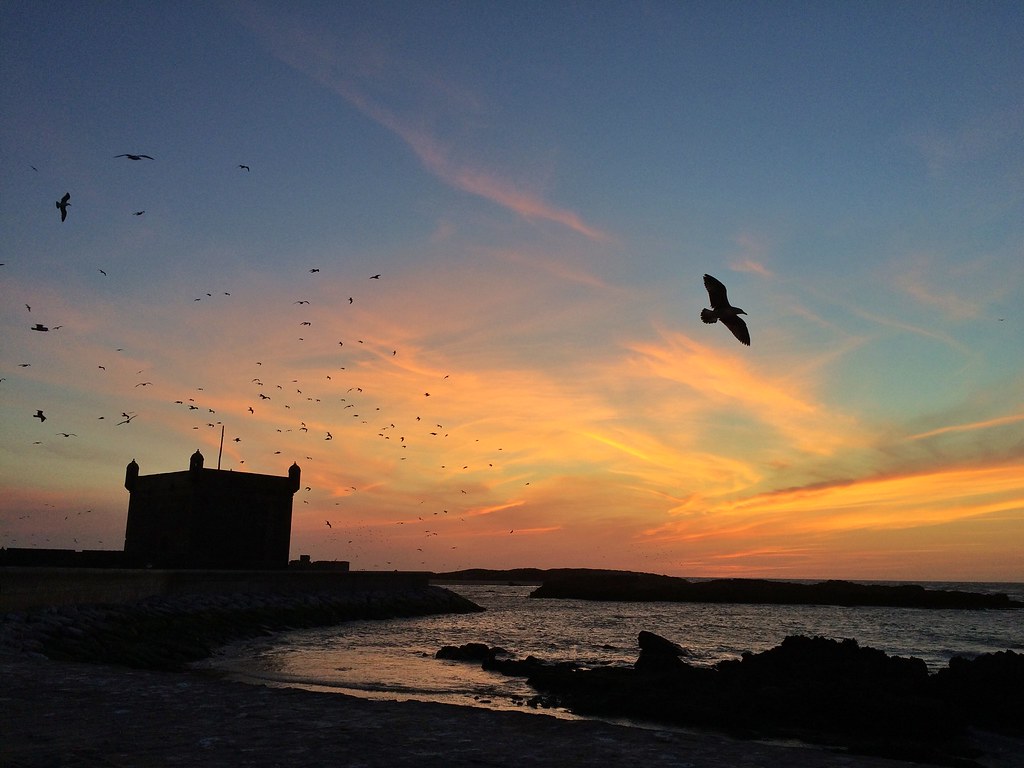 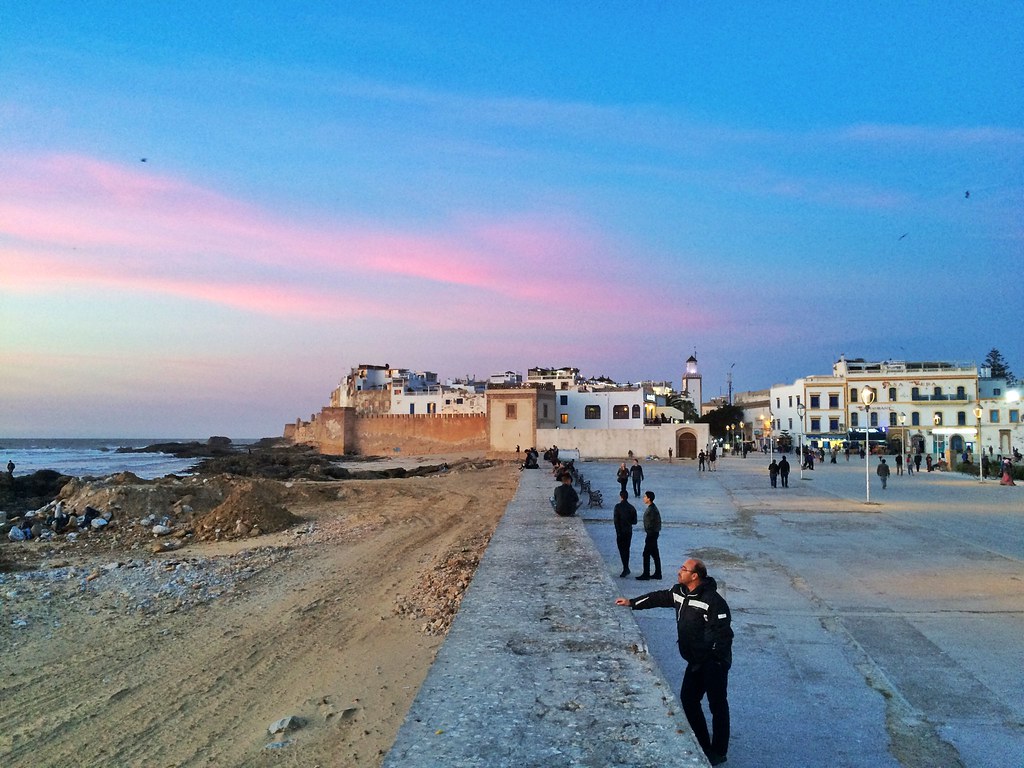