Morocco is a popular surfing destinations and one of the best towns to give it a go is Taghazout. The hotel options weren’t very appealing so we ended up staying a few kilometres south at Banana Beach by the small town of Aourir. We’d booked a cheap Airbnb apartment right on the beach and it ended up being a bit of a nightmare as it wasn’t the apartment advertised and it was absolutely filthy. On the plus side the beach location was lovely and occasionally camels would be ridden past our apartment. 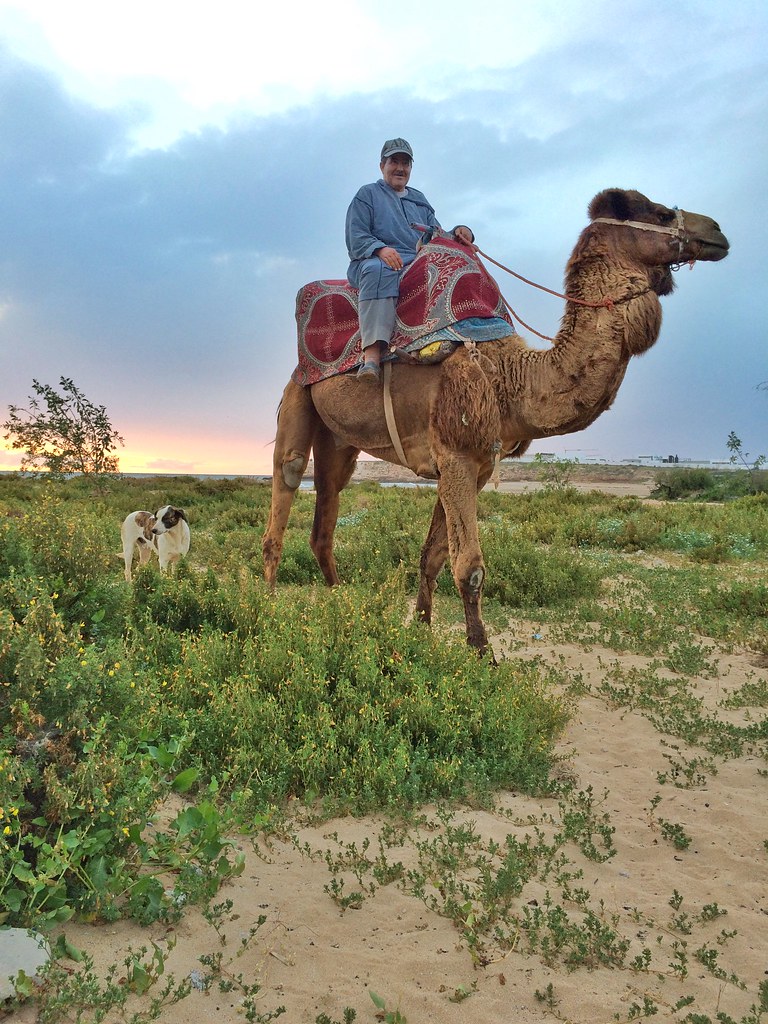 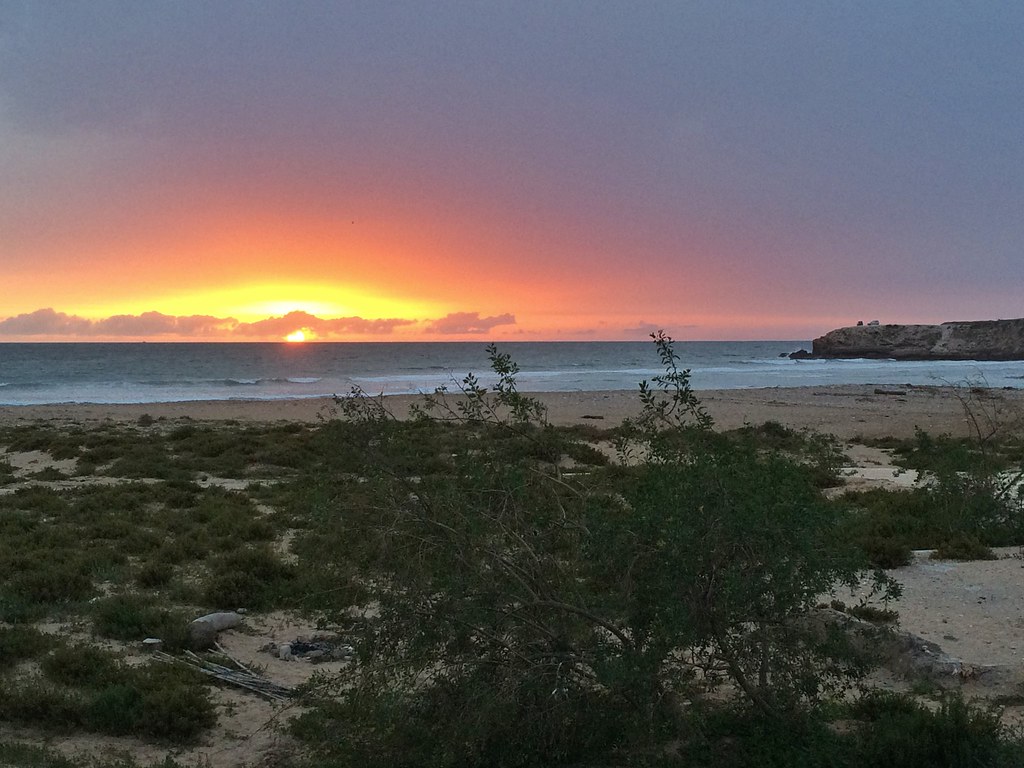 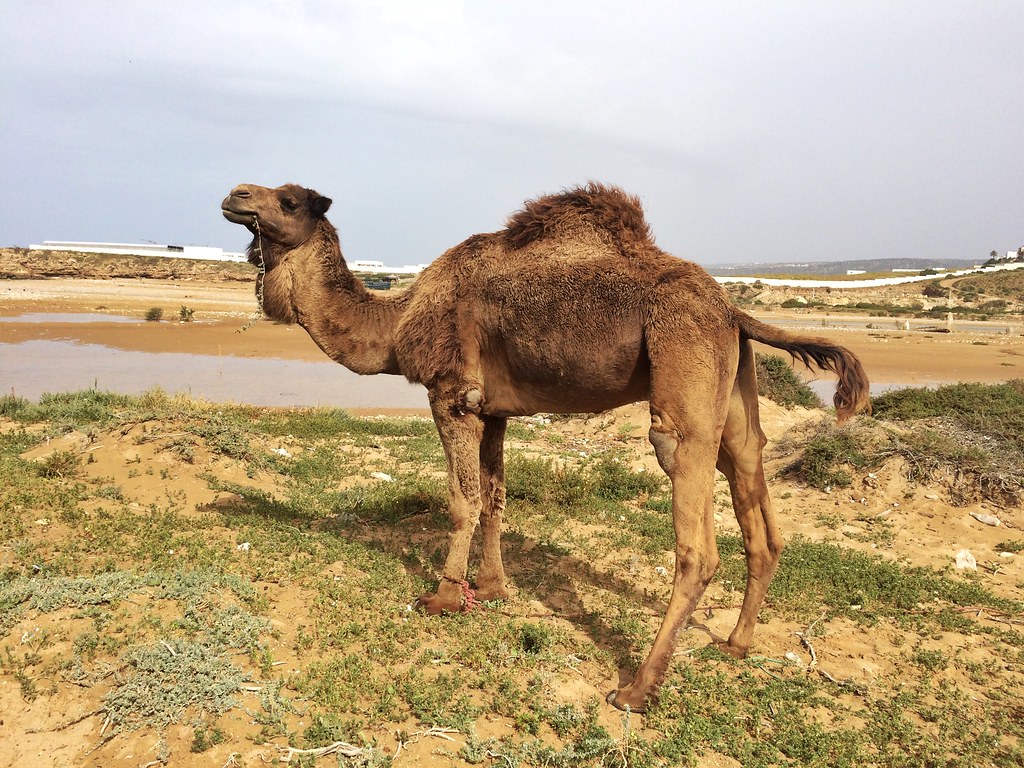 We took advantage of our beach-side location and took the longboard out. It was nice to be back in the sea but boy was it cold, even with a wetsuit on. We didn’t make it easy for ourselves though as we tried to save money by renting just one board and suit, so we’d have to change into a freezing cold wetsuit every hour or so and it was unbearable. Craig was totally shivering while I wore a woolly jumper on the beach, trying to warm up before my next turn. The coldness put us off surfing for another day, that and the fact that my muscles were destroyed afterwards; I suppose that teaches me for laughing at all the surf gurus doing hilarious stretches and fake surfing positions along the beach. 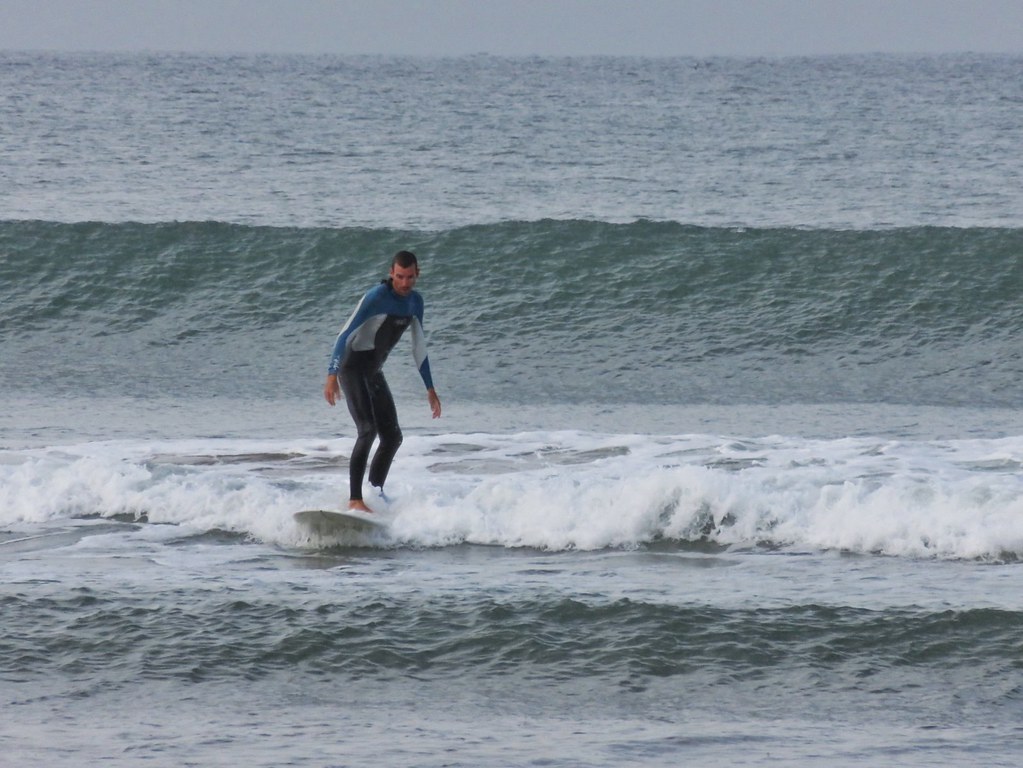 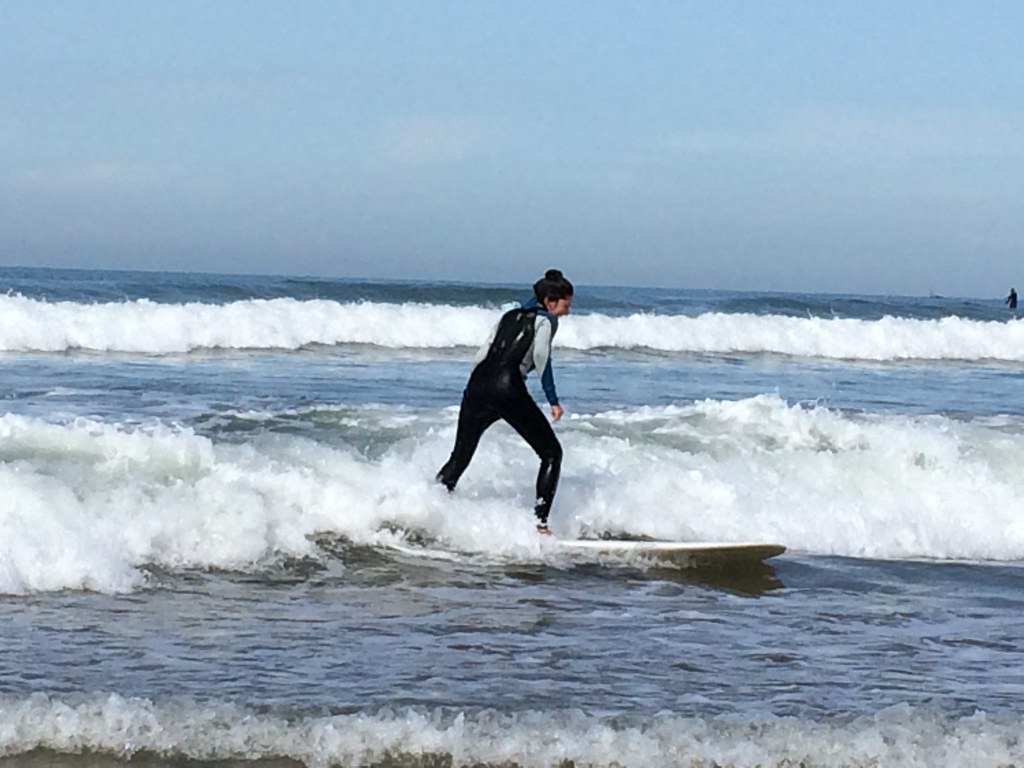 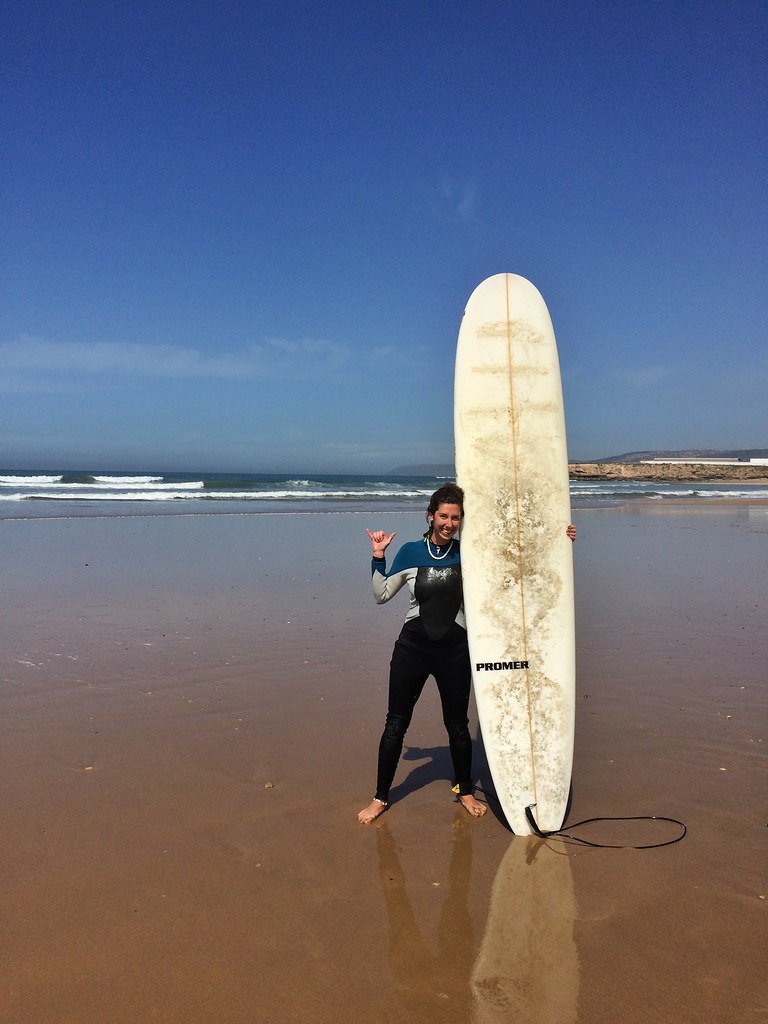 The next day we decided to explore Paradise Valley which is about an hour inland from Aourir. Locals arrange tours but we didn’t want to do that and the public transport options were very limited, so once again we hitchhiked, or at we least tried to! The first section wasn’t too bad, we walked out of town and then stuck our thumb out and eventually a young guy picked us up. I got the impression that it wasn’t a free ride though so we asked how much and he basically said “as you wish” so we suggested 20 dirham, less than €2 and he was happy with that so he drove us along an extremely quiet road towards Paradise Valley. About half way along we arrived at a view point and that was as far as our driver could take us as he had to avoid police checks. He pointed way out into the distance “that’s Paradise Valley…not far, easy walk” and so we walked and we walked. Thankfully the road wound downhill so it was an easy route but very depressing with only the odd car passing us and no one stopping. Geez, if we were struggling to get to the valley how the heck would we get back to town? 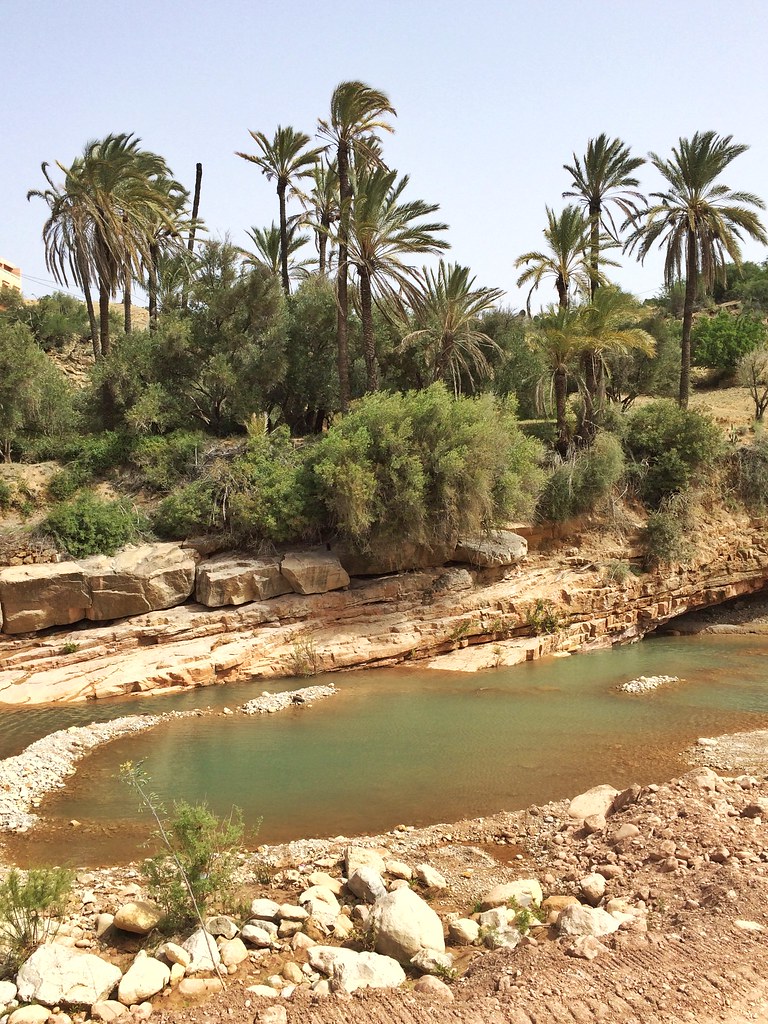 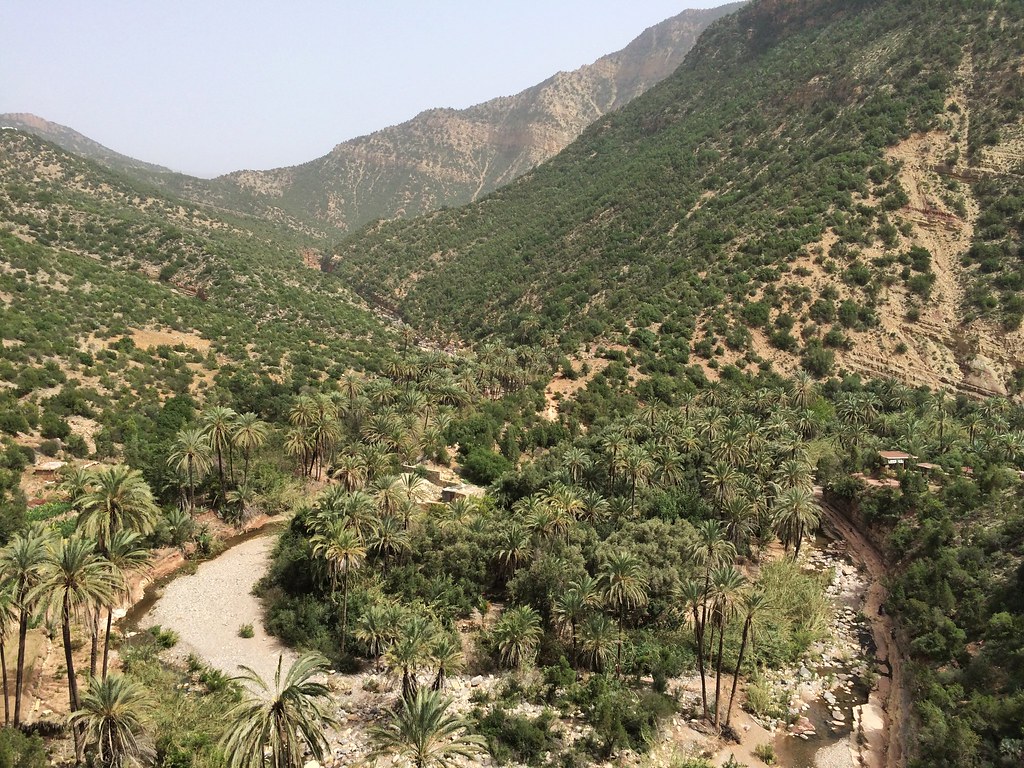 We reached the bottom of the palm-lined valley and strolled alongside the emerald coloured river until finally a car pulled over for us. It was a rental car with a Portuguese guy who didn’t speak English and a lovely lady from Switzerland. She was a very talented watch maker and makes them for some of the most expensive watch companies in the world. We arrived at a carpark and followed a trail that led further down into the valley. There was a beautiful gorge at the bottom with the inviting river dropping down little waterfalls into idyllic rock-pools. The area was surprisingly busy so we ventured up the valley in search of a quiet pool where I could swim in my bikini discreetly so I didn’t offend the local families picnicking on the rocks. The trail just led us high up the valley and we realised we were too high to access the pools so we ventured back and found a launching spot. There were some amazing pools to jump into, so we found a deep area and leaped into the extremely cold water. I actually felt really sorry for all the Muslim women there, the men were in boarder shorts, playing in the water while the women stayed on dry land, fully dressed and baking hot. 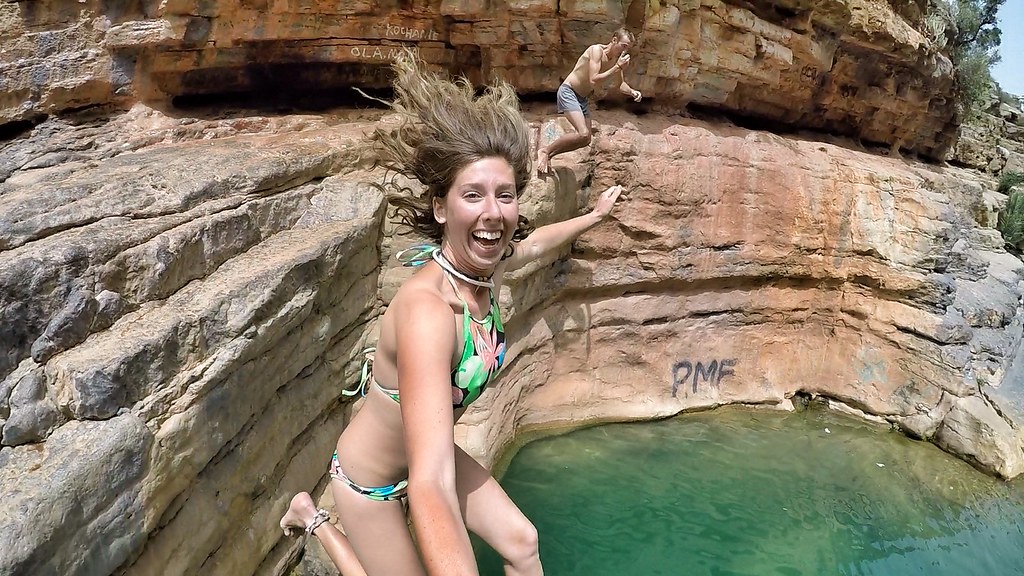 Sadly the beautiful area had been rather ruined by the locals though. They come and camp along the valley, making campfires to cook their tagines and then leaving all their rubbish behind. The litter issue became even worse when a freak wind blew through the valley and plastic wrappers and bags flew past us and landed in the clear pools. 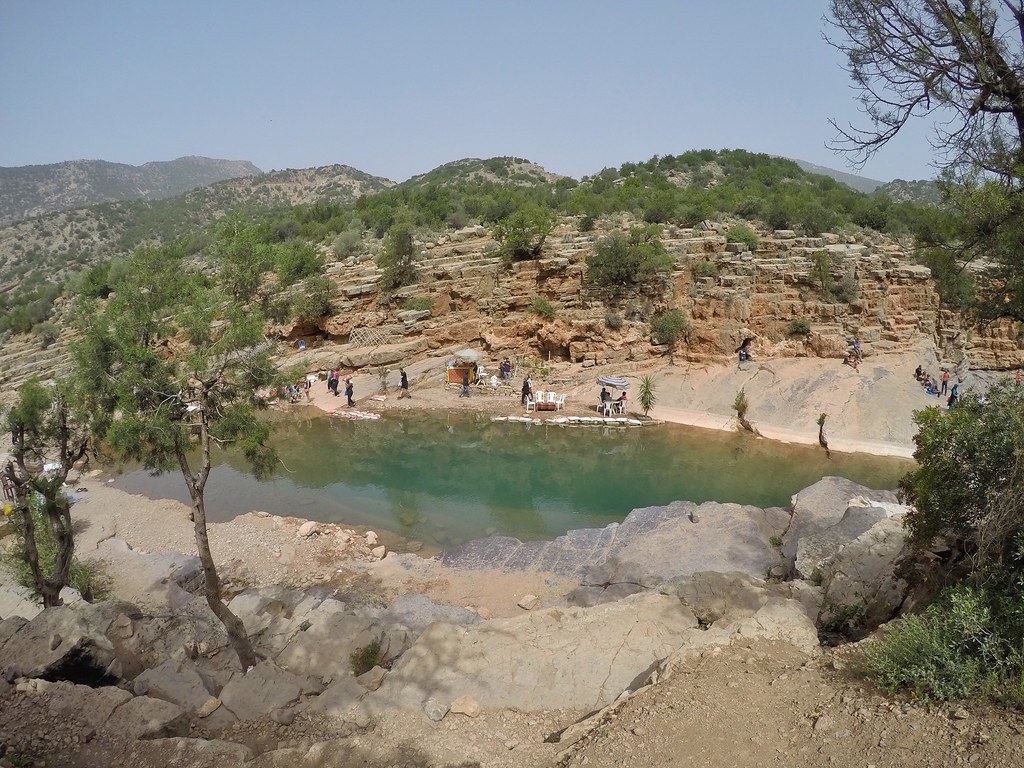 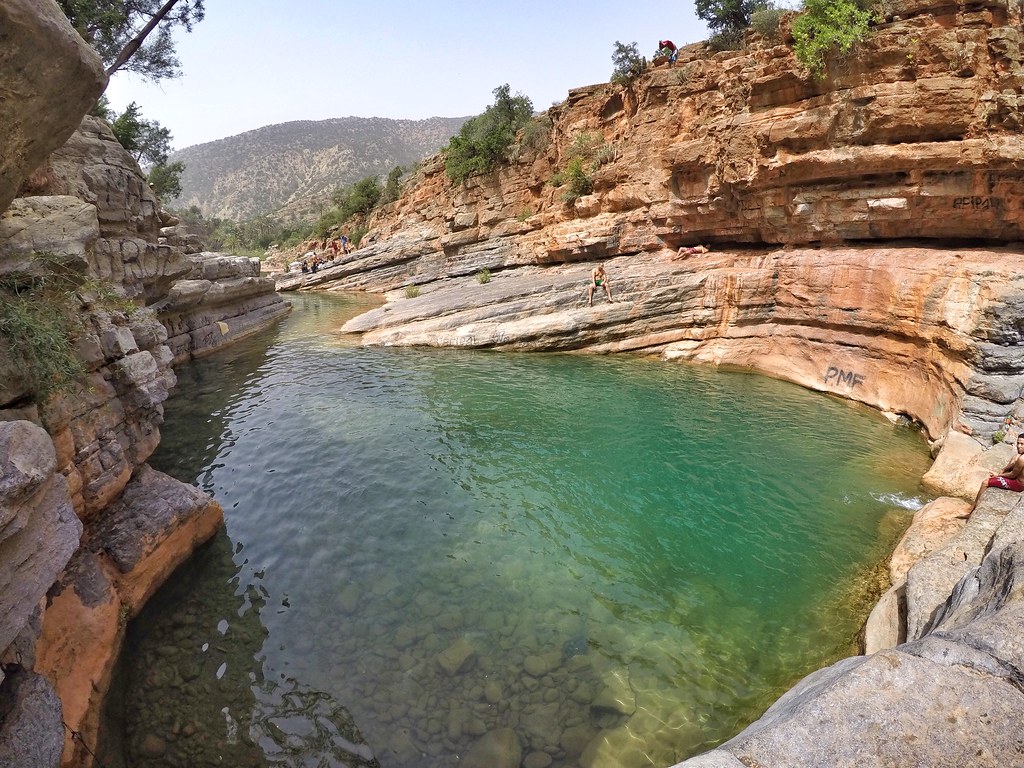 Some guys were absolutely bonkers and jumped from cliffs maybe 30 meters high. In fact one particular chap was really showing off and after being cheered on to do the highest jump and actually surviving it he poured water on a rock face and slid down the rocks into the pool and I can only imagine how much that must’ve hurt his stomach. The Swiss couple had offered us a ride back so when we saw them leaving we grabbed our bits and headed up. We took the original path we’d come down on and clearly it wasn’t the correct route as we walked along some seriously scary sheer edges and took a lot of wrong turns. We soon confirmed the fact that we were on the wrong trail when we saw the Swiss couple way ahead of us in the distance! So we really had to rush but we kept taking the wrong route and panicking that we’d miss our ride home. We had to really catch up but didn’t want to make it obvious so we ran through bushy areas and did a casual stroll when we were in the open, hoping they wouldn’t realise we’d taken a completely retarded route back. There was an ambulance and police car in the carpark so I presume someone had an accident in the pools. We were told someone died two days ago at the pools which was pretty scary, I guess too many people have been doing dangerous dives. It was a nice area but certainly not a wow place to visit in our opinion.