The Berber town of Tafraoute sits in a stunning location in the Anti Atlas Mountains. We managed to grab a grand taxi with an absolute lunatic of a driver who raced up the mountains and got us into town bang on lunch time. Seeing as we had the rest of the day to explore we set off on a hike to see the blue rocks which a Belgium painter ‘created’ in 1984. To cut down the walk we stuck our thumb out and the second car along stopped and happily took us a few kilometres up the road. The driver was a lovely chap that spoke fluent English and had a Swiss wife, and next to us was his sweet mum who didn’t speak any English. We talked about the Berber language and he taught us a few new words. When I said Imic Imic which means ‘Little, Little’ his mum gave me a big smile and then said something back. “What’s she trying to say to us?”, “she’s saying the Arabic words for ‘little, little’, but just ignore her, you don’t need to speak Arabic” and we all laughed. But it’s something we’ve heard a lot of in Morocco, there seems to be a bit of rivalry between the Berbers and the Arabs with both sides giving reasons why they think their ‘race’ is better, it’s all done in a pretty friendly manner though, with a smile and a giggle.

Anyway, we were dropped off in a beautiful area and followed a faint trail through a landscape of giant orange boulders and distant mountains. The hike was really nice until we actually reached the painted rocks which were an absolute eye-sore. I hadn’t really known what to expect but it just seemed like the most ridiculous thing to do, who the heck covers giant, natural boulders in paint? There was a mix of blue and pink rocks and we couldn’t help but feel it ruined the area. Then we saw all the lower boulders had been graffitied and we were ready to leave. We had two options for the route back, head to the road where we’d come from or take an unknown route west creating a loop hike, so we picked the latter. 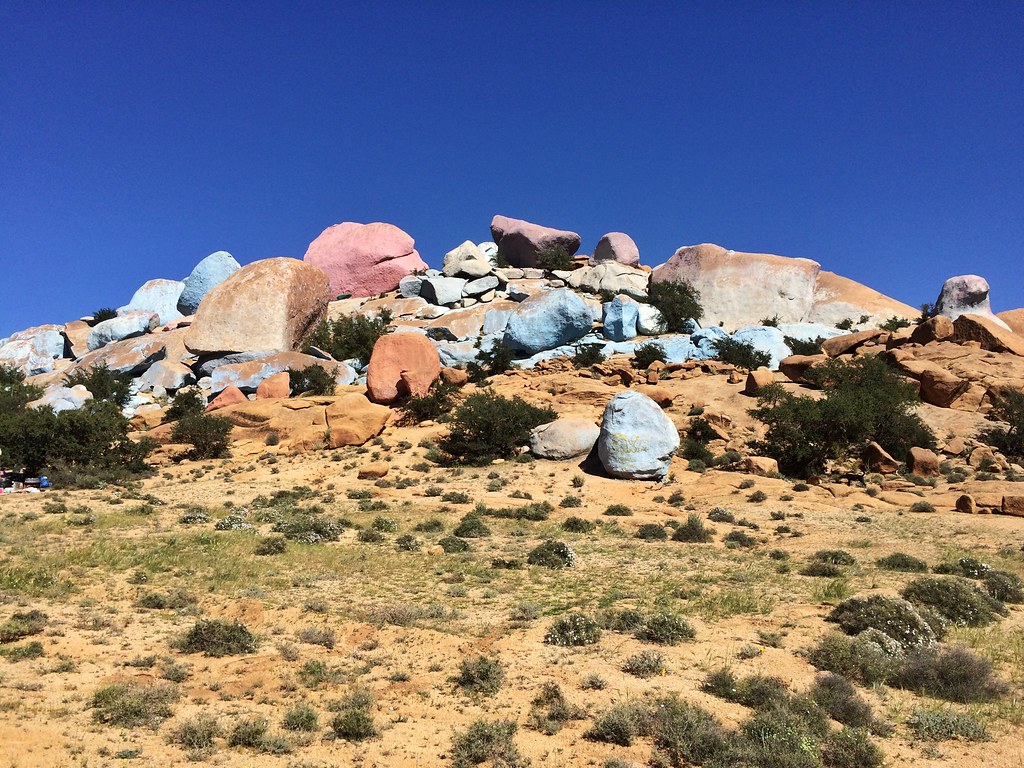 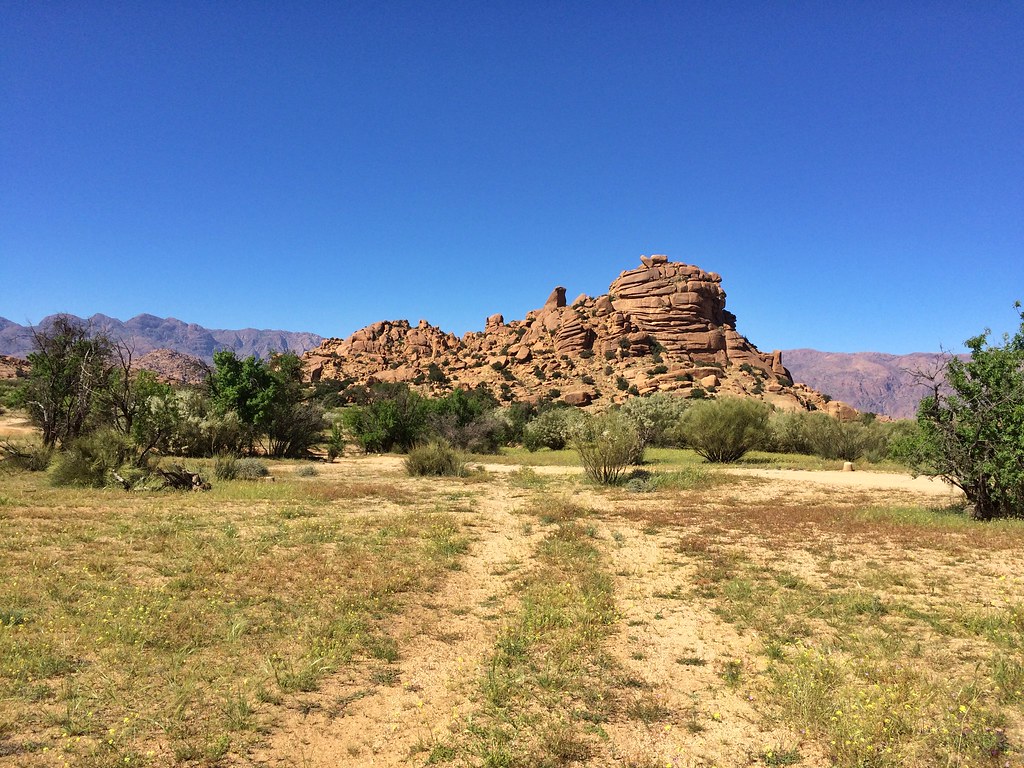 We climbed down a rocky area into a beautiful valley which had a Palmeraie at its base. Craig had seen a photo of a rock online called ‘Surf Rock’ and we happened to spot it protruding out like a diving board off the top of a mountain. Of course Craig wanted to reach it so we began the climb up. It wasn’t too tough but there was no trail so we ended up meeting a lot of unclimbable sheer rocks or areas full of cacti that we couldn’t get through unless we wanted a painful and involuntary acupuncture session. The third route we attempted got us pretty far up the mountain for some impressive views but we came to a boulder which was too tricky for us to climb up. Craig gave it a go and his vertigo quickly set in causing his legs to wobble like jelly. We both felt pretty defeated and annoyed that we’d put it all that effort and left without reaching the end goal, but it was nearly sunset and we’d already walked about 10km so we couldn’t explore for much longer. Craig headed off to suss out the other side of the mountain and see if there was a short cut back down and then I heard him call out “I’ve found the route to the top!!” and I let out a bit of a groan because I couldn’t be bothered anymore. I shouldn’t have done though, because it was so worth it. Craig recognised a huge boulder from the blog he’d read which had a gap underneath to walk though and once we were out in the open, the Surf Rock was right in front of us! Wahoo! 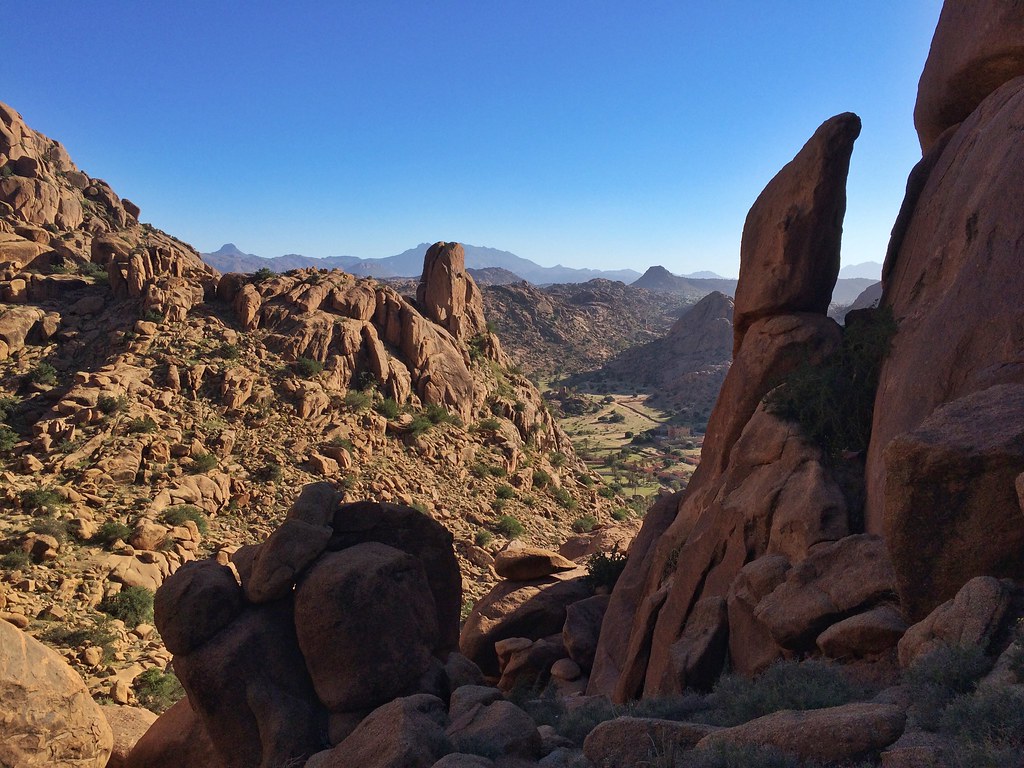 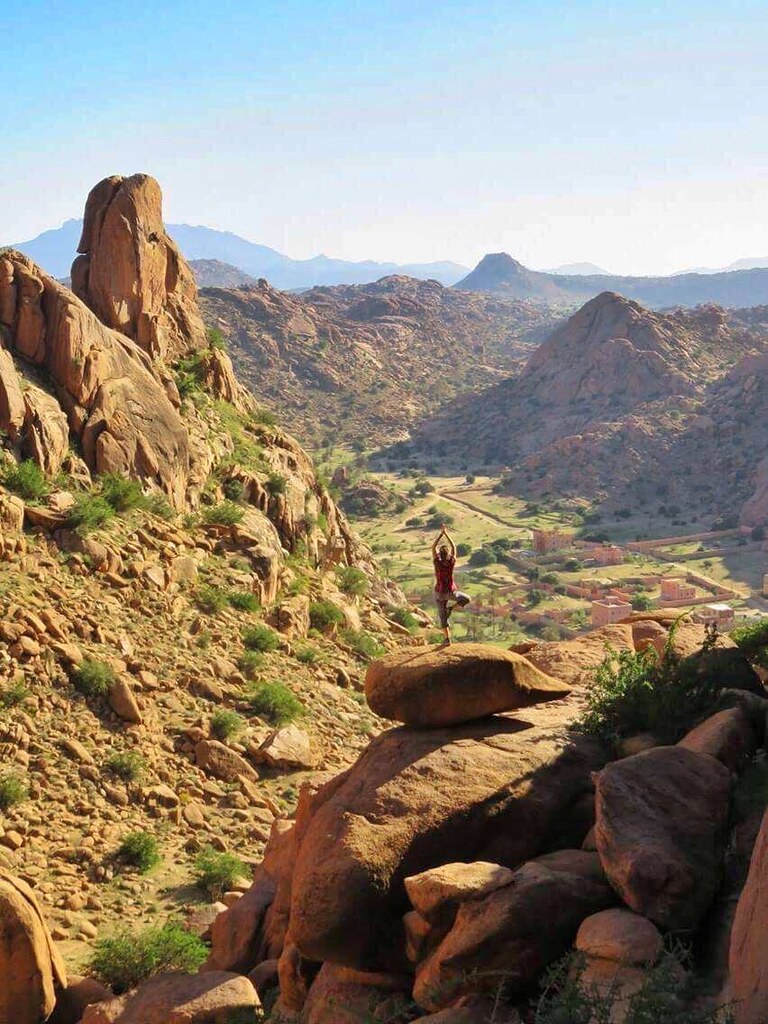 It was like a slice of Norway in Morocco and quite the impressive sight. We took lots of photos of us pretending to surf on the long, thin rock, hoping it wouldn’t give way under our weight and then we had to head back down. It was a shorter route back but had a few iffy areas before we finally reached the village path at the bottom and met a group of barking dogs. Some gardens had boulders awkwardly blocking large areas, while other people utilised the fallen boulders and one chap had built a stone wall and door at the base of one rock and made a little house. 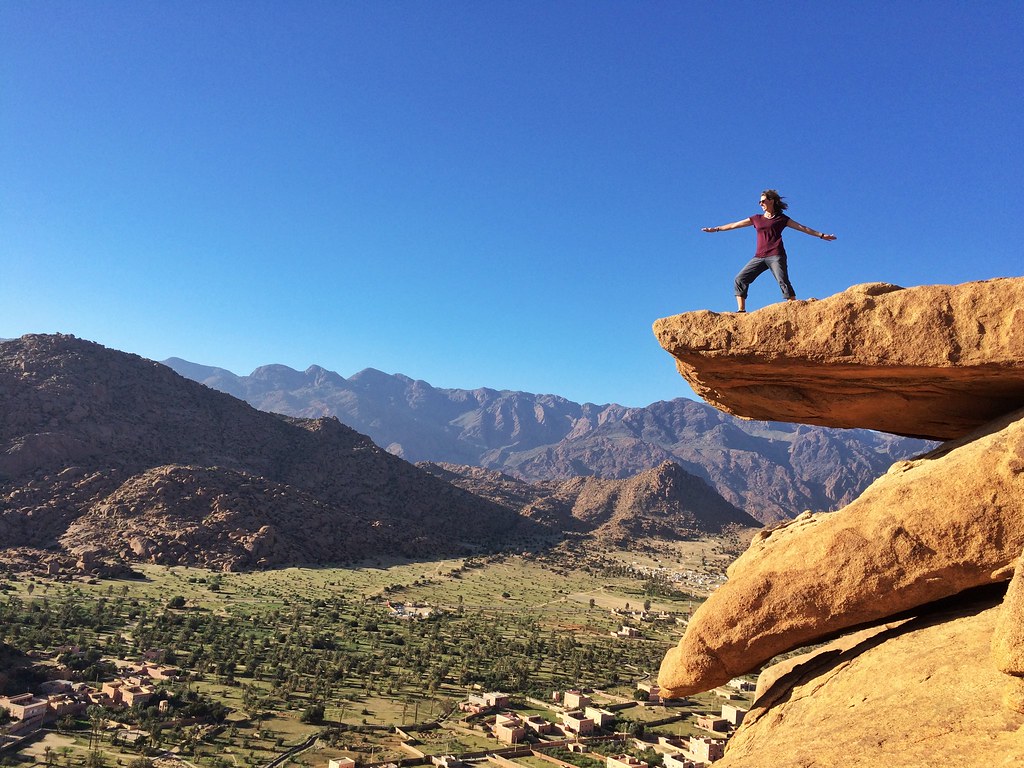 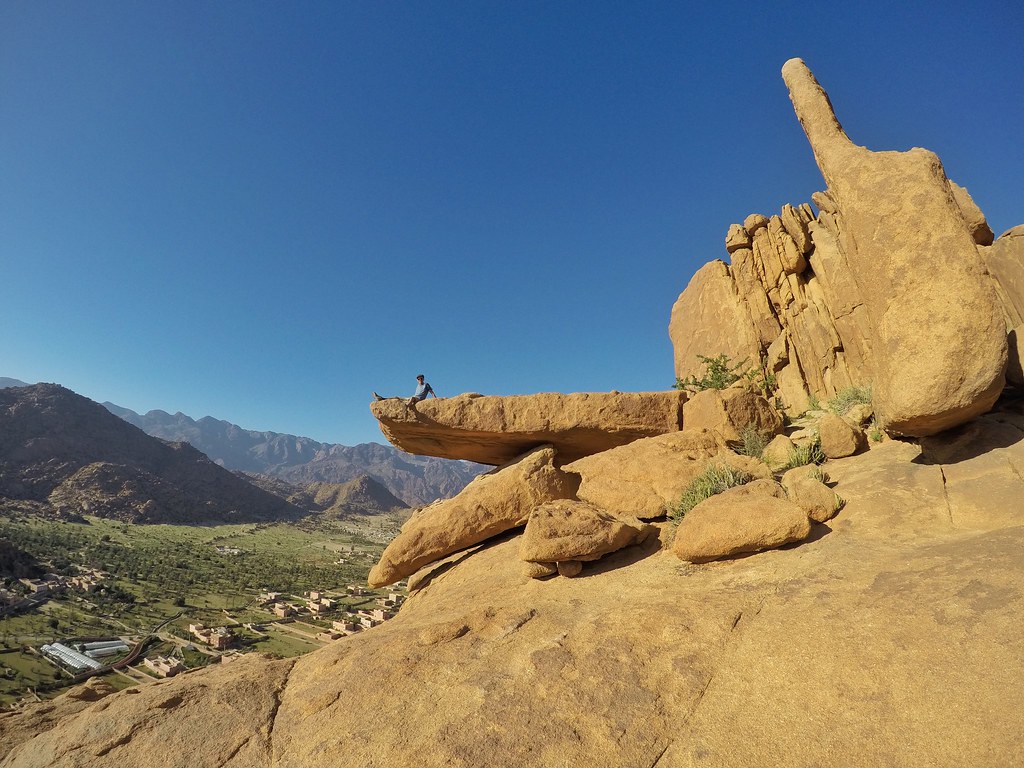 The next day was Souq day in Tafraoute and the village was heaving with locals. Men lined up and chatted along a bridge while the ladies headed to the makeshift market. The women in this area all wore black sort of saris and the traditional Tafraoute Babouches (Moroccan slippers). The slipper design was so pretty; the women wore bright red ones with multicoloured embroidery and the men fashioned simple yellow leather ones. I couldn’t resist buying a pair which ranged from €6 to €10 depending on quality, and I did something very unlike me and bought the best ones! Another local speciality was Amlou, which is basically Moroccan peanut butter. The best variety, and most expensive is made from almonds and Argan oil. Our friends had raved about the stuff and a guy offered us a tester so we happily stuck a mini spoonful into our mouths and it was like I’d eaten a mouthful of concrete. I accidentally wiped a bit on my lip on route to my gob, but my mouth was stuck together with almond paste and I couldn’t lick it off. It took a whole minute for us to swallow the lethal mix and tell the shop owner thank you, but no thank you. 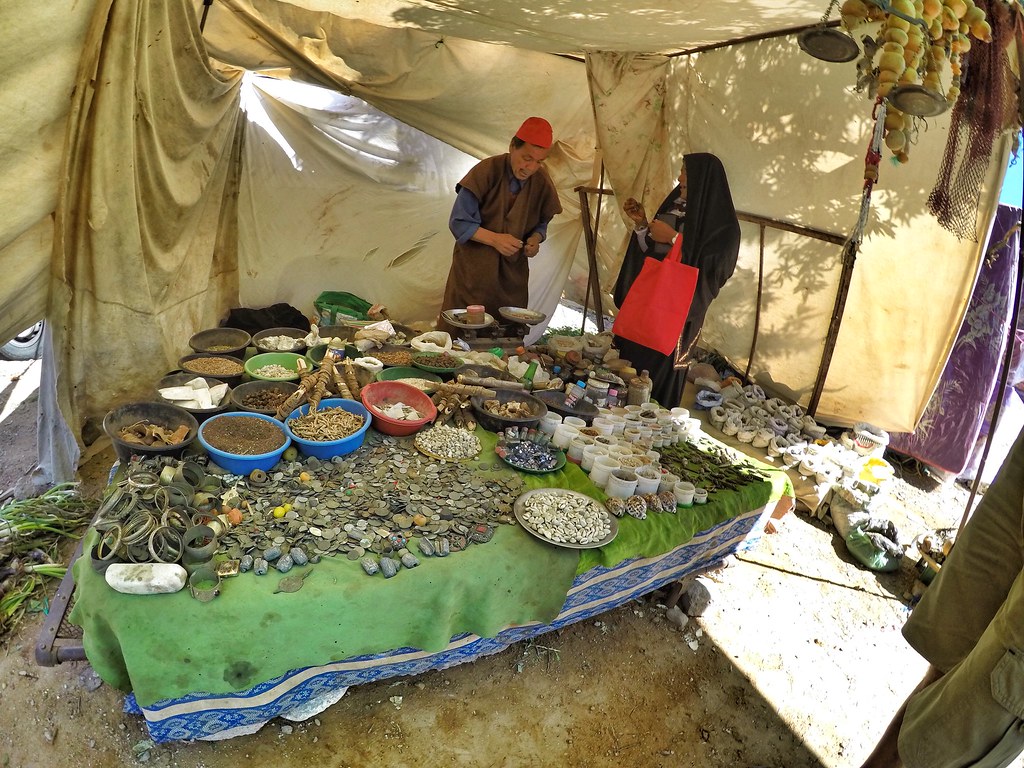 After the Souq we headed out to the Ameln Valley, and seeing as we’d had so much luck hitchhiking lately it seemed a better option than waiting for a bus. A nice chap picked us up and we all squeezed into the front of his rusty pick up. We were dropped at a little village at the start of the valley and we set off towards the mountains. Below the rocky peaks were little villages where the lower sections had new builds while the top halves were rustic mud houses almost blending into the mountains behind. 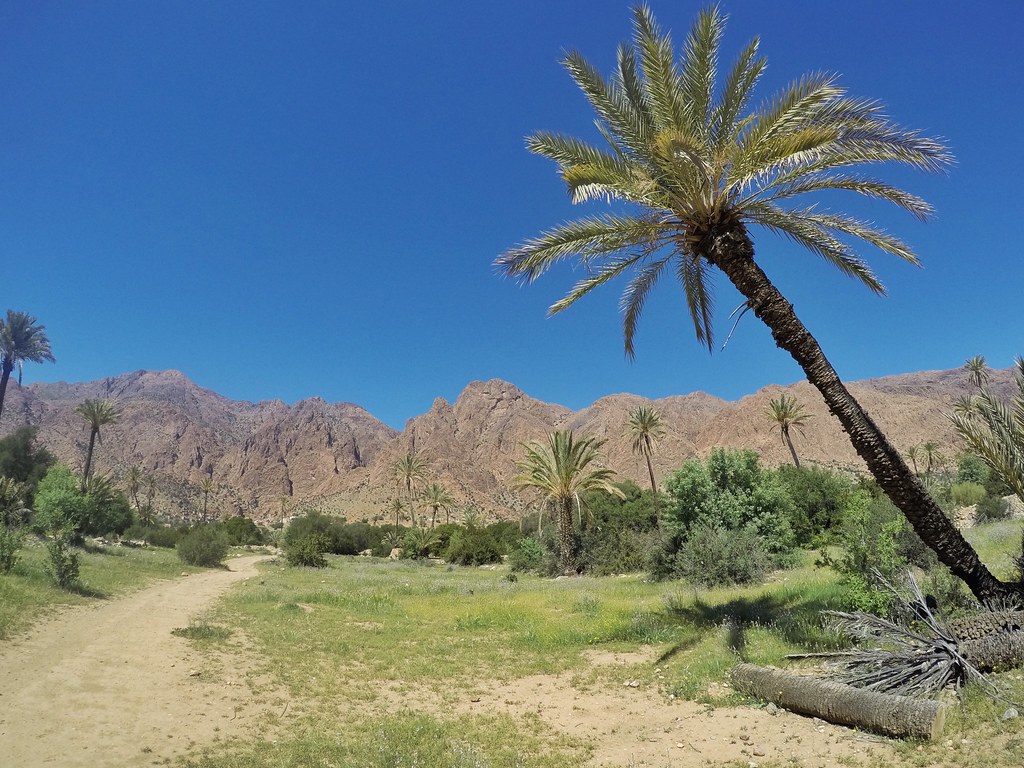 The area was alive with wildflowers as we crossed through meadows, dry river beds and palmeraies towards the village. I think most of the locals were out at the Souq as the place was empty. We stopped for a break and Craig spotted the famous Lions Head in the mountain. It took me forever to work it out and then it was unmistakable and I couldn’t look at the mountain range without seeing this huge, prominent lions face staring out into the distance. 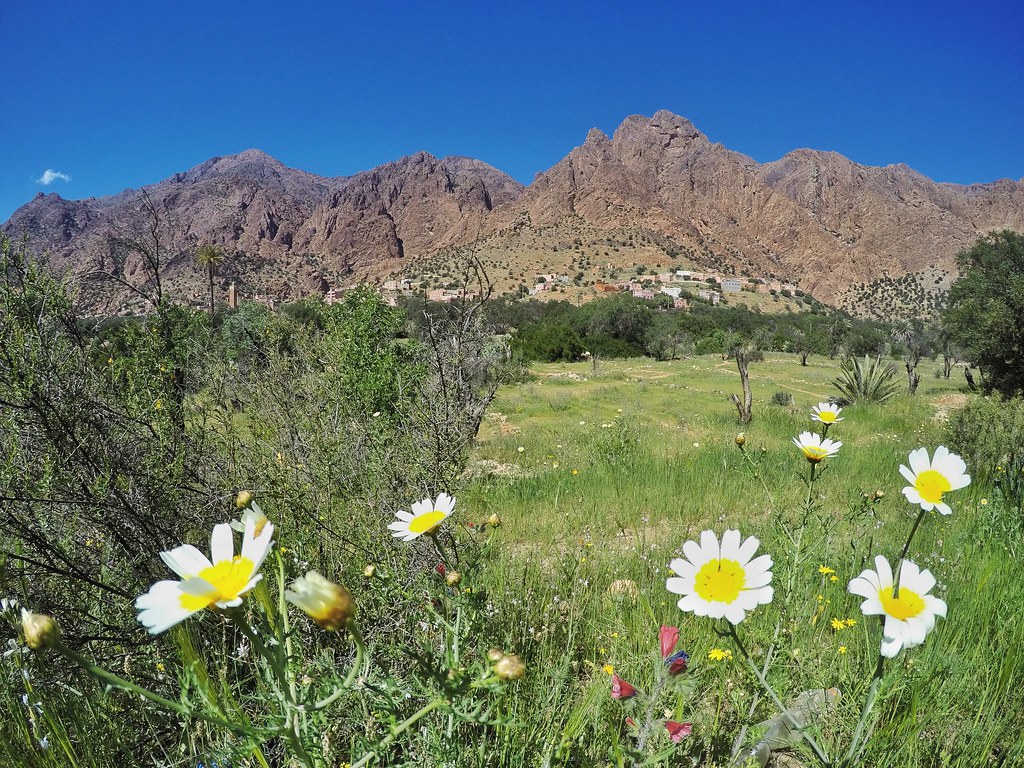 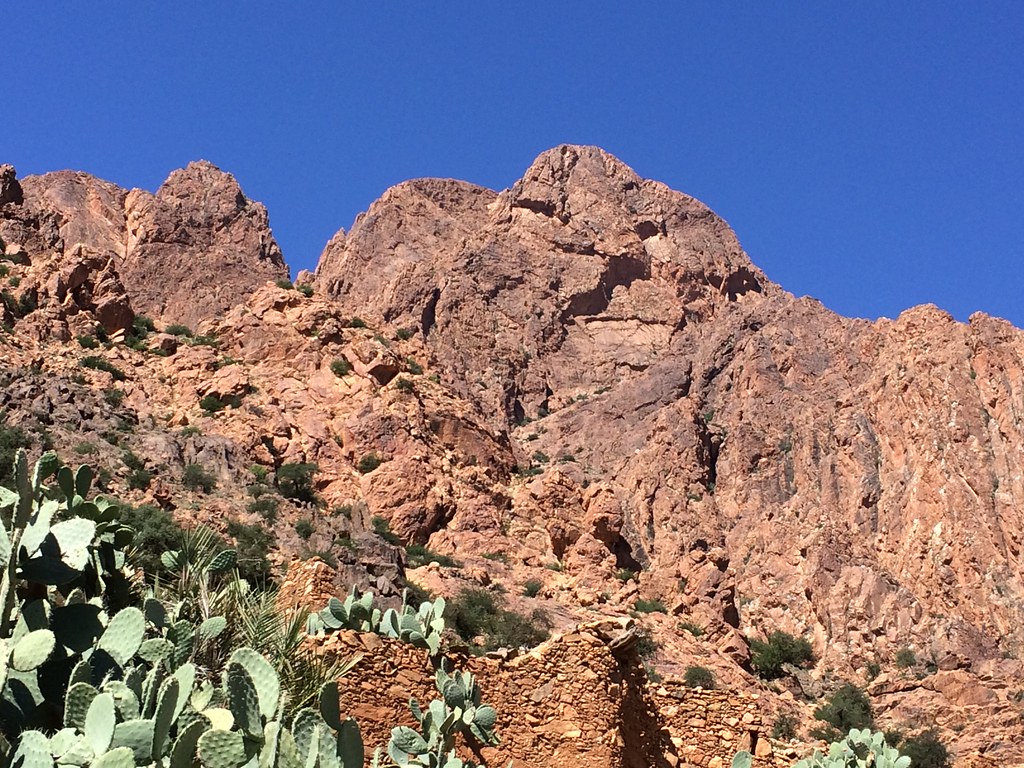 We could of easily spent longer in Tafraout, it was an amazing area with superb hiking and the friendliest locals. Normally the women are quite shy in Morocco, and it’s almost always the men who instigate conversation but this was one of the first places where the women would joyfully say hello or the Arabic version and it was so lovely, maybe they thought I was a fellow-local in my snazzy new slippers!