Dades Gorge instantly impressed us with its red rock formations, reminiscent of the scenery in Utah and Arizona. Our hotel was along the valley and the bedroom door opened onto a terrace with incredible views of rolling hills, colourful gorges and the milky river below. A few kilometres away were the ‘Monkey Finger’ rock formations which we hiked along the river to reach. We wandered through little villages with crumbling kasbahs and in the distance were peaks of the high Atlas Mountains. We soon reached an area of terracotta rock boulders which resembled melted wax. I had a rotten cold and my blocked ears really seemed to effect my balance because I tried climbing a small boulder and after only reaching a meter or so elevation I felt totally petrified and unsafe. It took me a while but I managed to climb back down with shaky legs and continue onto the next area of cool rocks. A young boy spotted us coming up the next hill and decided to become an unwanted tour guide. He just walked ahead of us as if he was leading the way and it was really winding me up because he was only doing it to ask for money, so we nipped it in the bud and declared we did not need a guide and he finally scurried off. 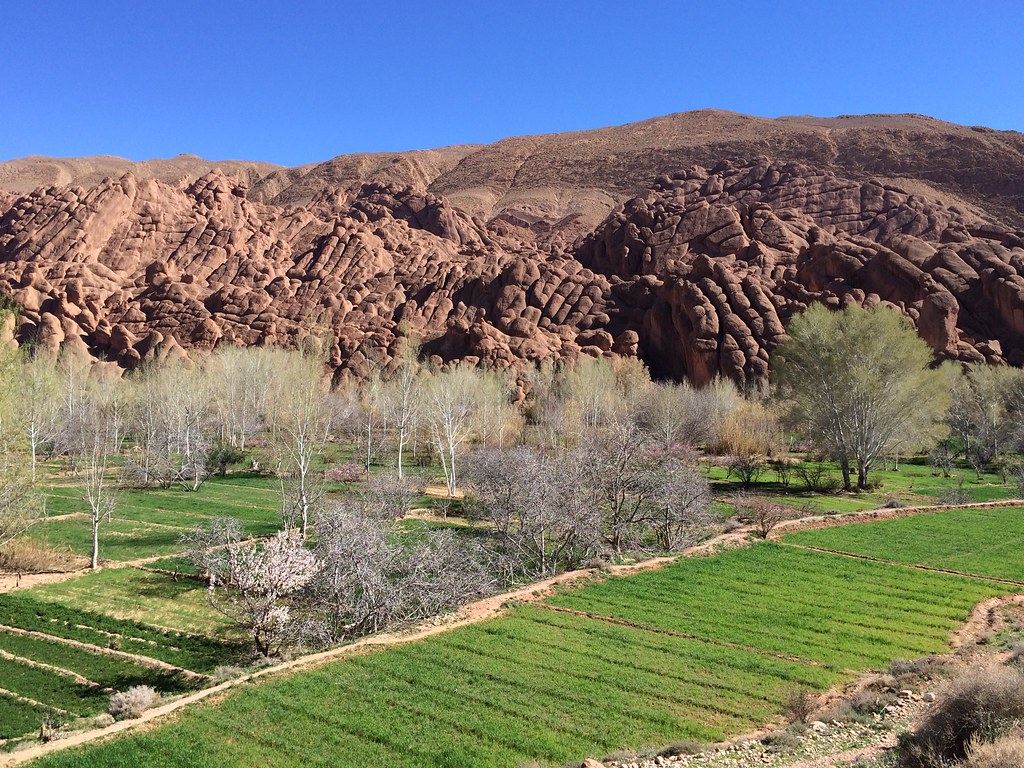 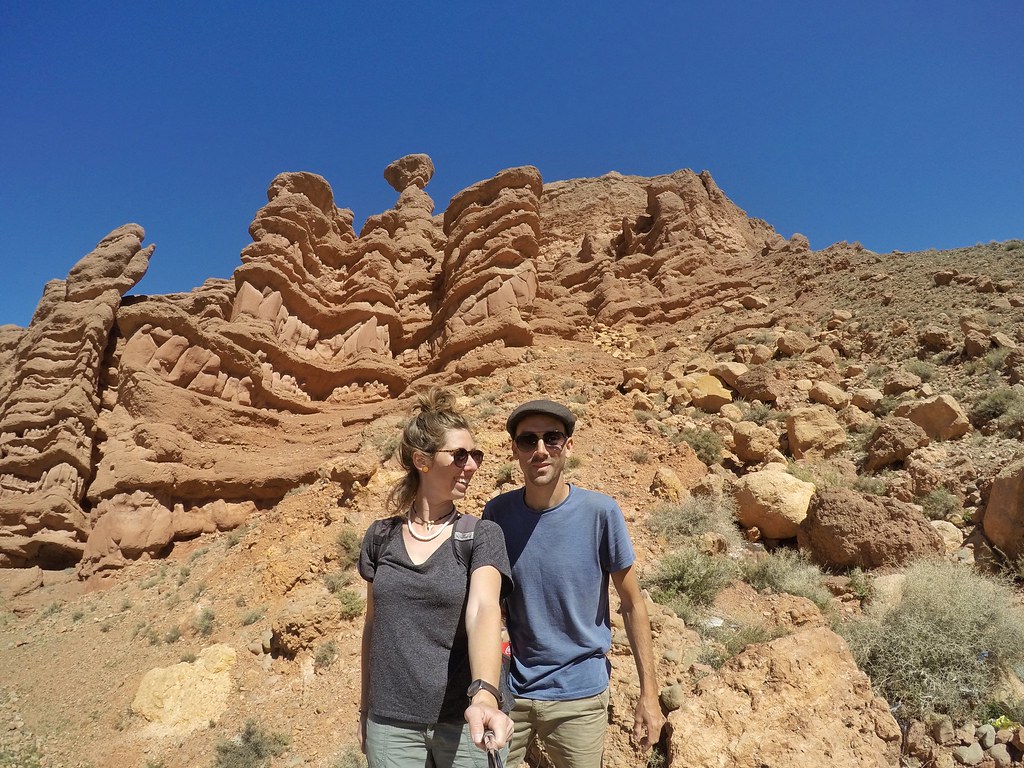 We had views up a beautiful red valley to our left and straight ahead were the distinctive monkey fingers which actually resembled fingers with the creases in them. We followed a ridge-line along one section of them until it became too precarious and we couldn’t work out a route down – if only we had a guide eh? A different route back led us past lots of bright pink blossoms. It’s funny how Japan is so famous for its cherry blossoms yet the almond blossoms in Morocco are rarely talked about but totally gorgeous and without the crowds. 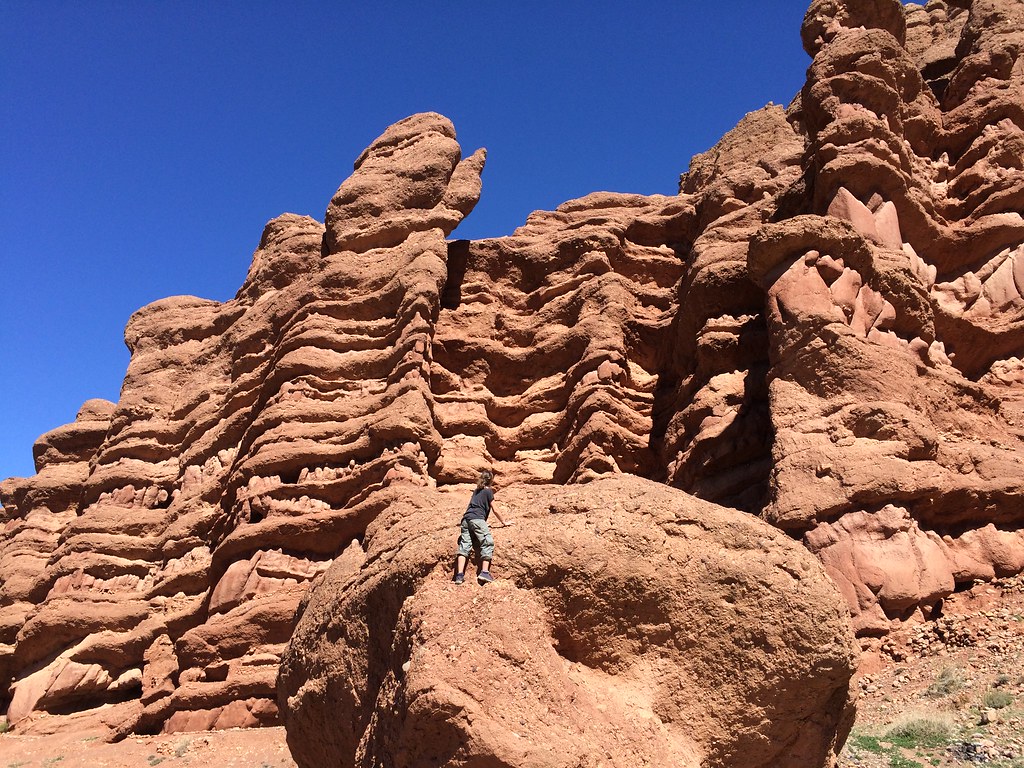 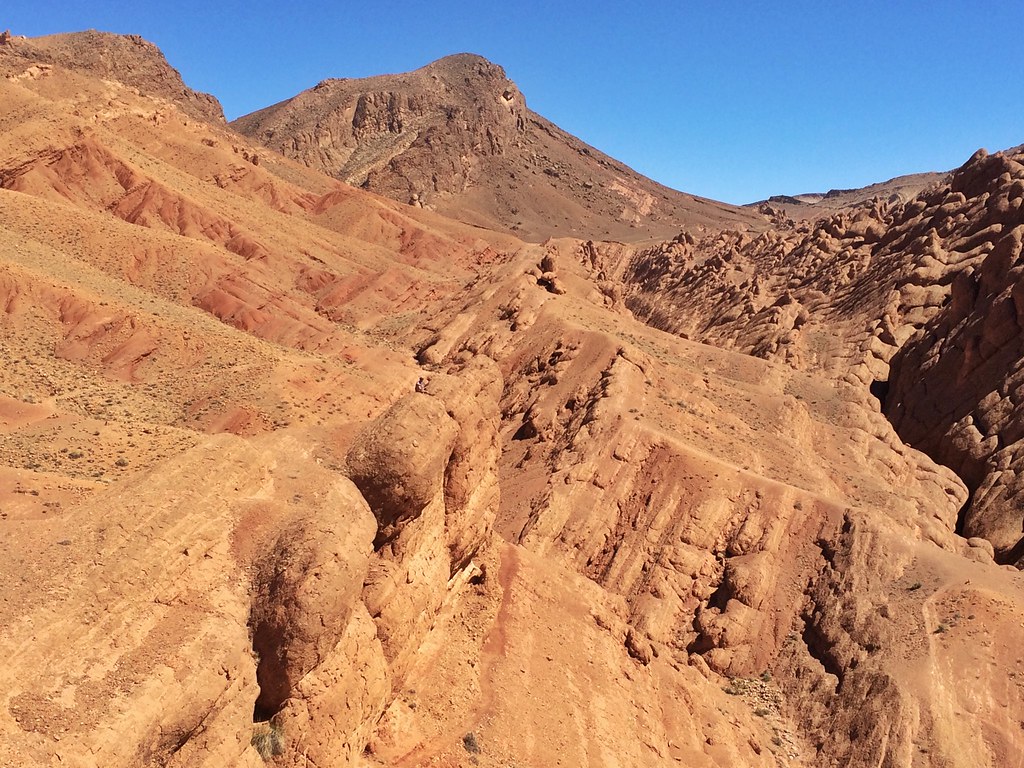 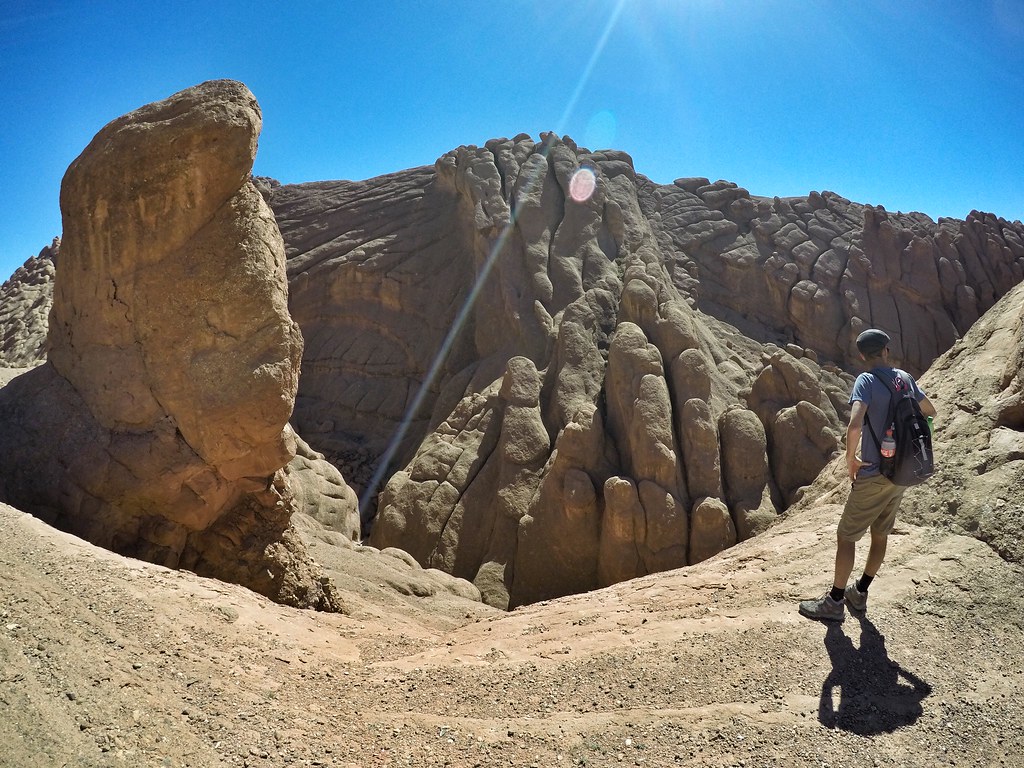 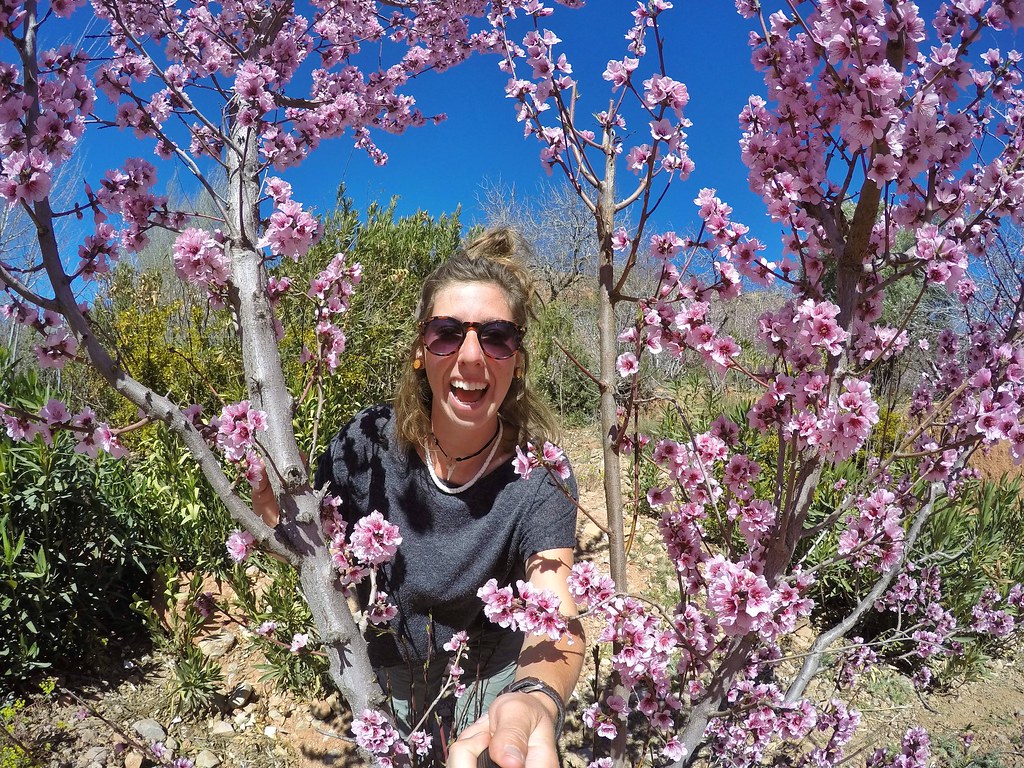 The next day we headed up the valley to see a particular section of the road which I’d seen blitzed on Pinterest and Instagram. It switchbacks up the side of the gorge in a spectacular manner and was a must see for us. Our hotel host had actually offered to take us up to the road and Craig saw a Dutch couple preparing to leave so said we’d come along. Turns out they weren’t going with the host and were about to head off in their rental car. But seeing as Craig broke the ice we were invited to join them which was great. The road wasn’t as spectacular as the photos I’d seen online, but it was still a great vantage point. We continued up the valley and found a really narrow section of the gorge similar to the Todra Gorge. It wasn’t quite as high but I think the Dades Gorge offered more variety than Todra, plus it’s not everyday that we find a €15 room in such a beautiful location. 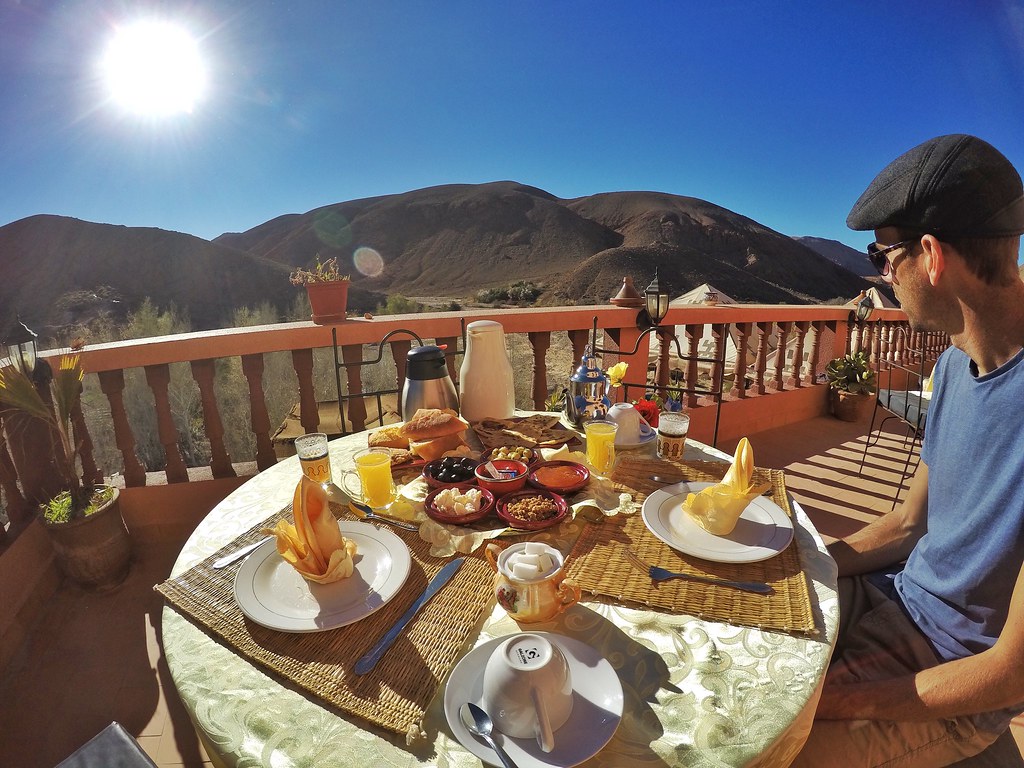 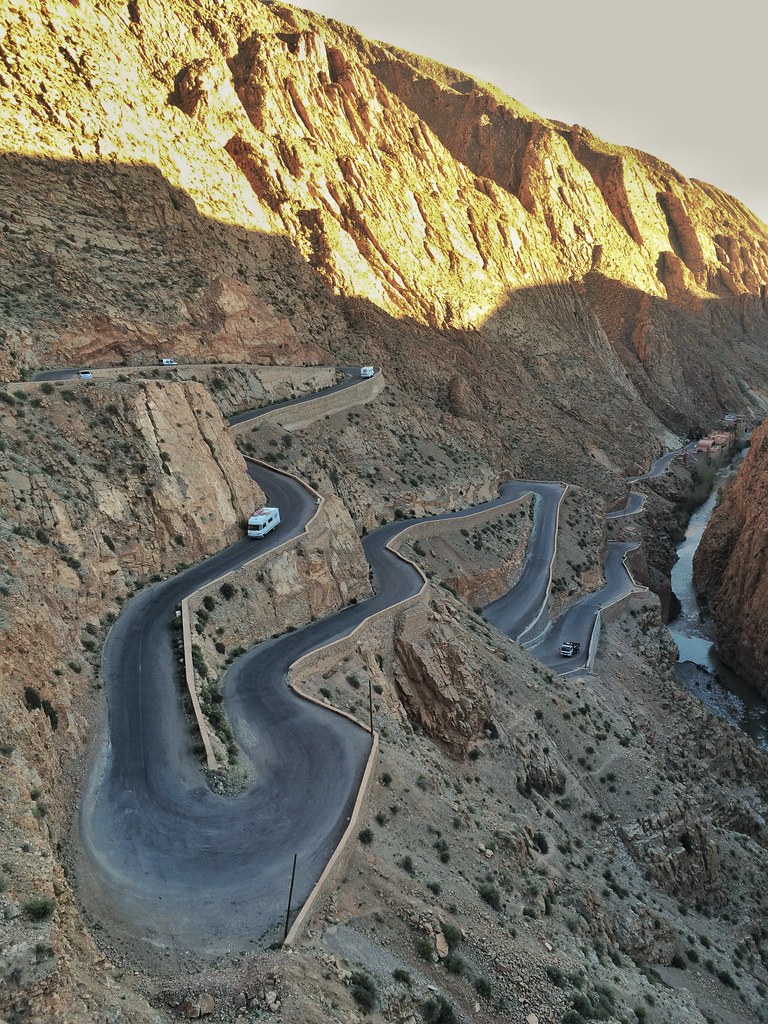 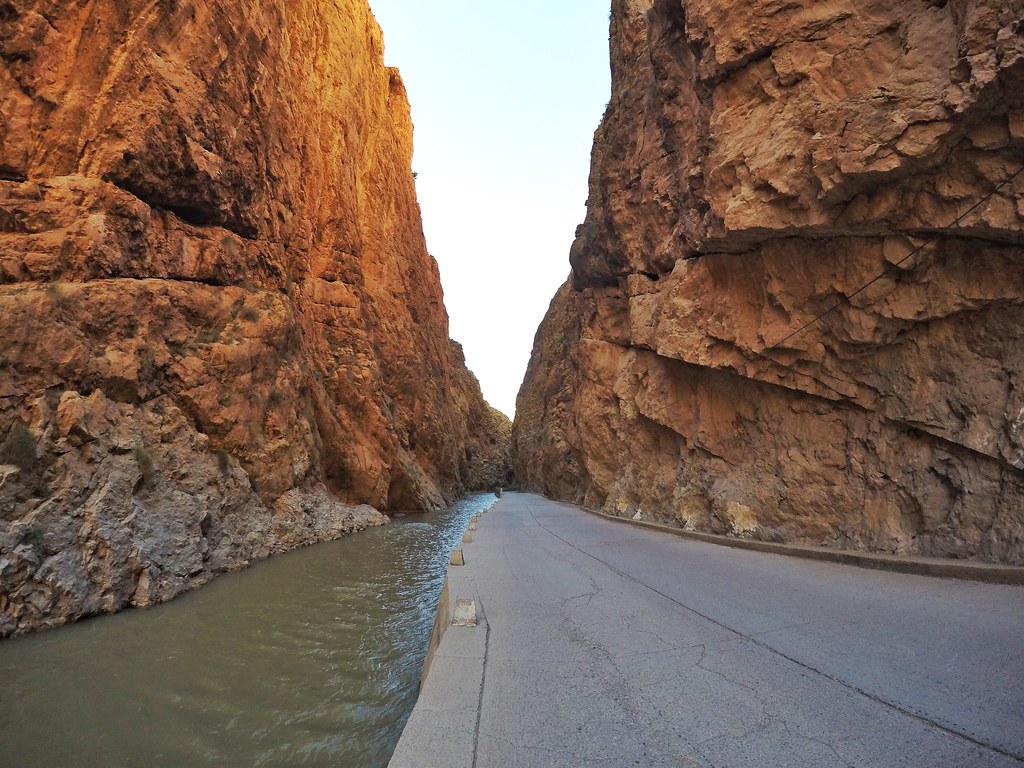 The Dutch couple we met were really friendly and offered to take us close to our next destination, Aït Benhaddou. Just before we left a local pointed to the tyre – it was clearly flat so Craig went about changing it to a spare tyre the size of a scooter wheel while the couple called the rental company. The flat tyre was an absolute joke, I’ve never seen such a worn tyre that the fibres actually poked out like strands of hair. We were set to leave, cramming our backpacks into the miniature car and driving south to the next village where they bought a replacement tyre and we were on our way. It was a long drive past Ouarzazate where we said our farewells and went about catching a grand taxi 10km up the road to Aït Benhaddou. The heat had become really zapping in Morocco and temptation to buy the spare seats in the taxi started to come over us so we could leave quicker. We managed to wait it out and set off with a local lady squeezed up against me with her arm across my chest. Her arm was crushing my breast and occasionally I’d attempt to breath and she’d kindly move her arm for a split second and place it back in the death position. 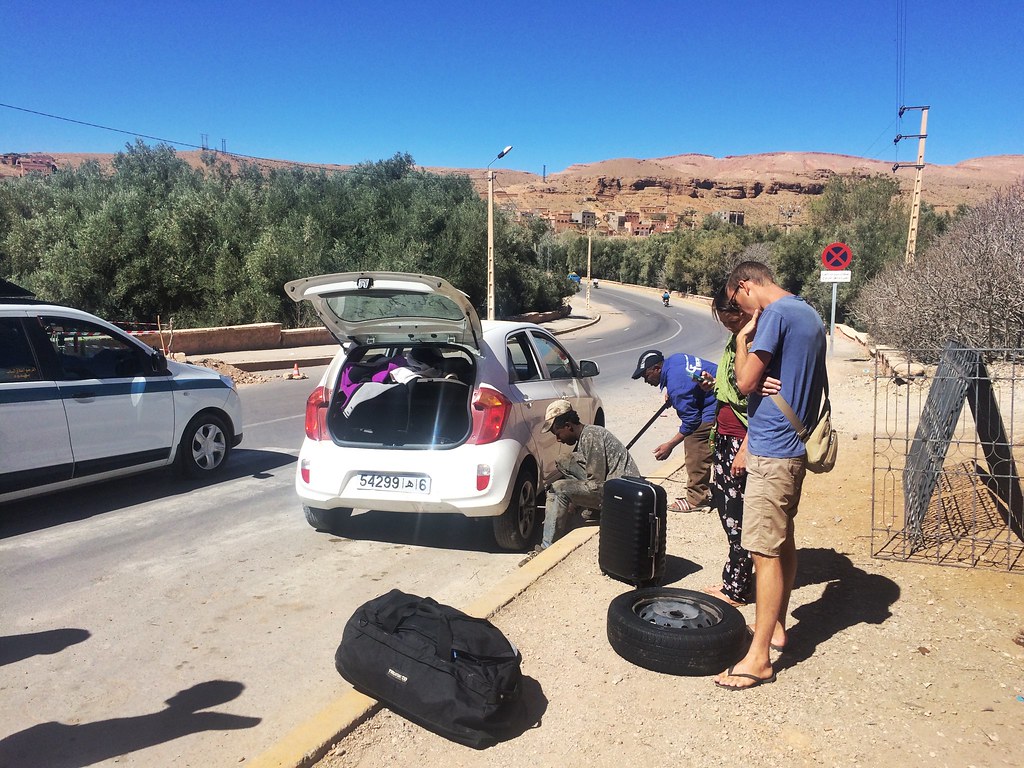 We were dropped in the village and told our hotel was nearby. It absolutely was not nearby and we had to walk over a kilometre in the heat with our backpacks. I was feeling pretty tired and fed up by this point as the hotel ended up being in an entirely different village. To be fair the location was stunning and there was a beautiful, tranquil terrace to relax on. The bad news was we’d expected to arrive much earlier and were really short on time so we rushed out, taking the rural route through the fields and along the river until we reached the bridge leading to the famous sight. Aït Benhaddou has been featured in numerous Hollywood movies thanks to its authentic mud kasbahs and dramatic mix of desert and mountain landscapes. I haven’t seen many of the films filmed here accept for Babel which was shot between here and Ouarzazate and the two ‘terrorist’ kids that shot the bus were kids from this village. 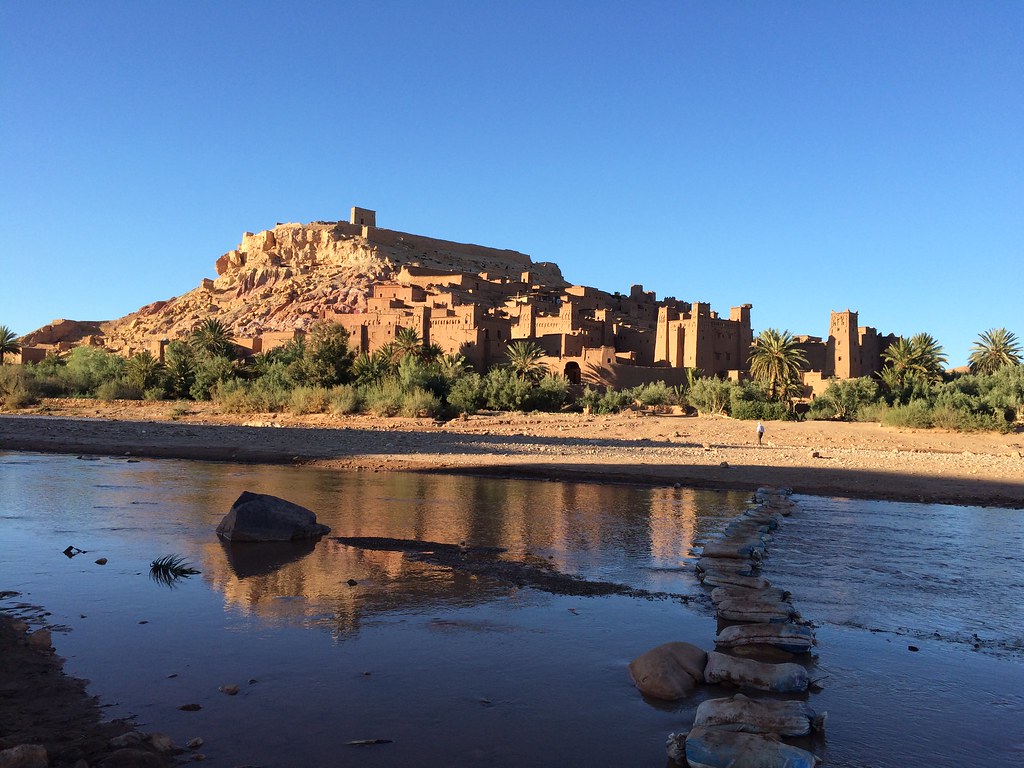 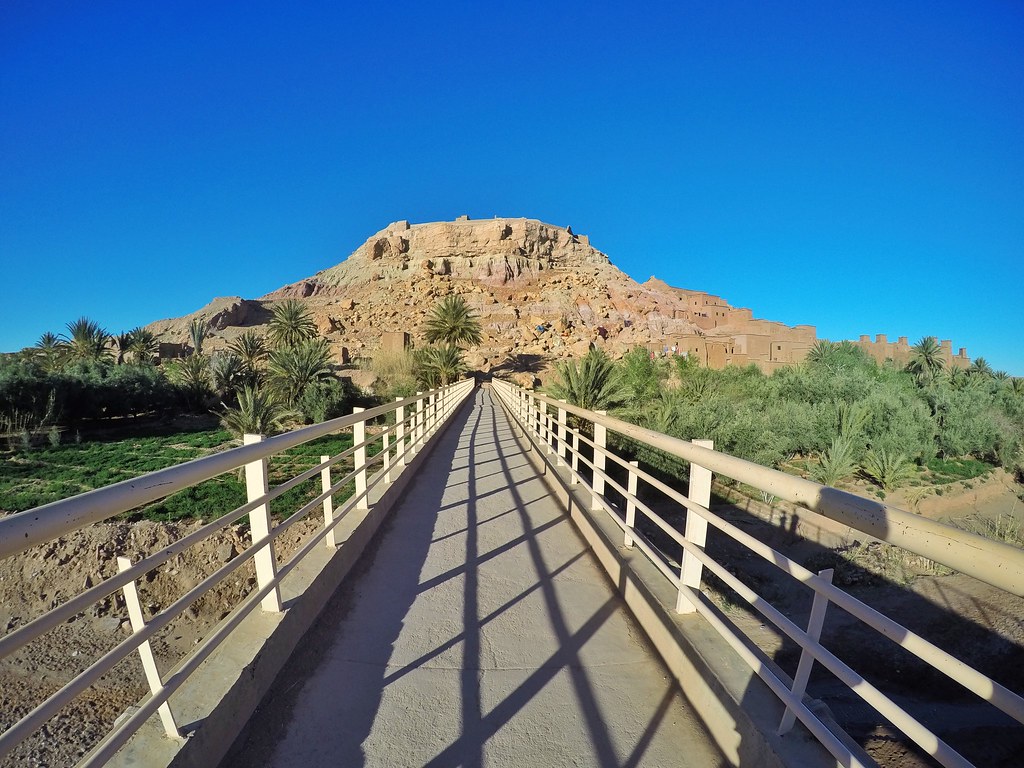 There was a prominent rock and to one side were ancient kasbahs and mud houses. We crossed back over the river via sand bag bridges to snap a photo from a distance. Some little boys quickly ran over and grabbed my arms trying to assist me over one of the sturdiest make-shift bridges I’d ever walked along. They just wanted a tip so I shooed them away and we sat on some rocks, watching the setting sun turn the buildings a rich terracotta colour. 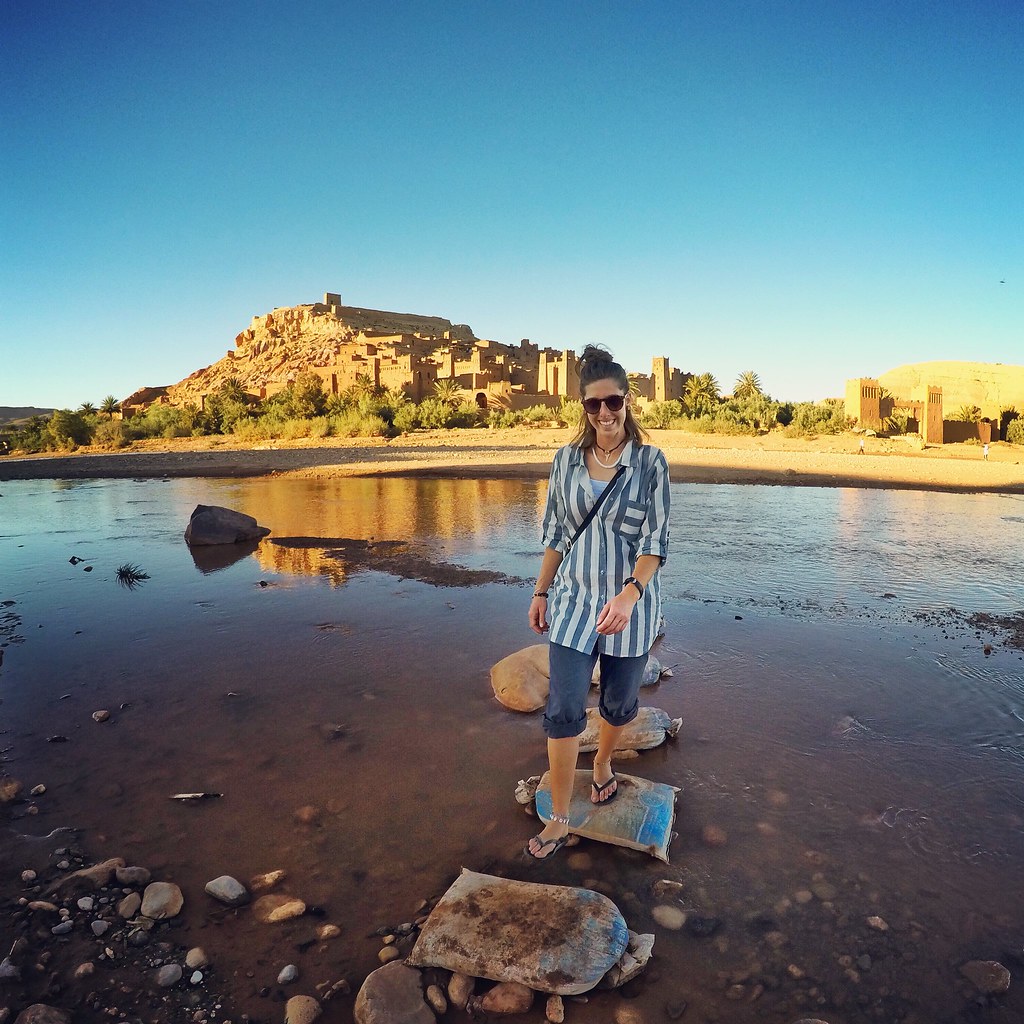 Before the sun totally set we ventured back across the valley and explored the narrow alleys leading past the kasbahs. Sadly most of them were lined with souvenir stalls until we reached the top of the rock. There was a great view across the valley, with the beautiful flat roof-tops and kasbah towers below us, and a landscape of badlands behind us. We tried finding a popular place to eat but all the restaurants were empty and uninviting. Seeing as we had a big lunch we got some snacks for dinner and walked back to the hotel. We left the village and walked along a lonely road lit up by the bright moon. Thank god there was a full moon as we’d of struggled to find our way back in the dark. It was a bit of a rushed visit as we left the next morning but it was a well worth detour if your in that area. If we hadn’t booked our outgoing bus from Ouarzazate we’d of loved to have explored the surrounding area on foot. It’s time for us to finally head to the coast now after a month inland. 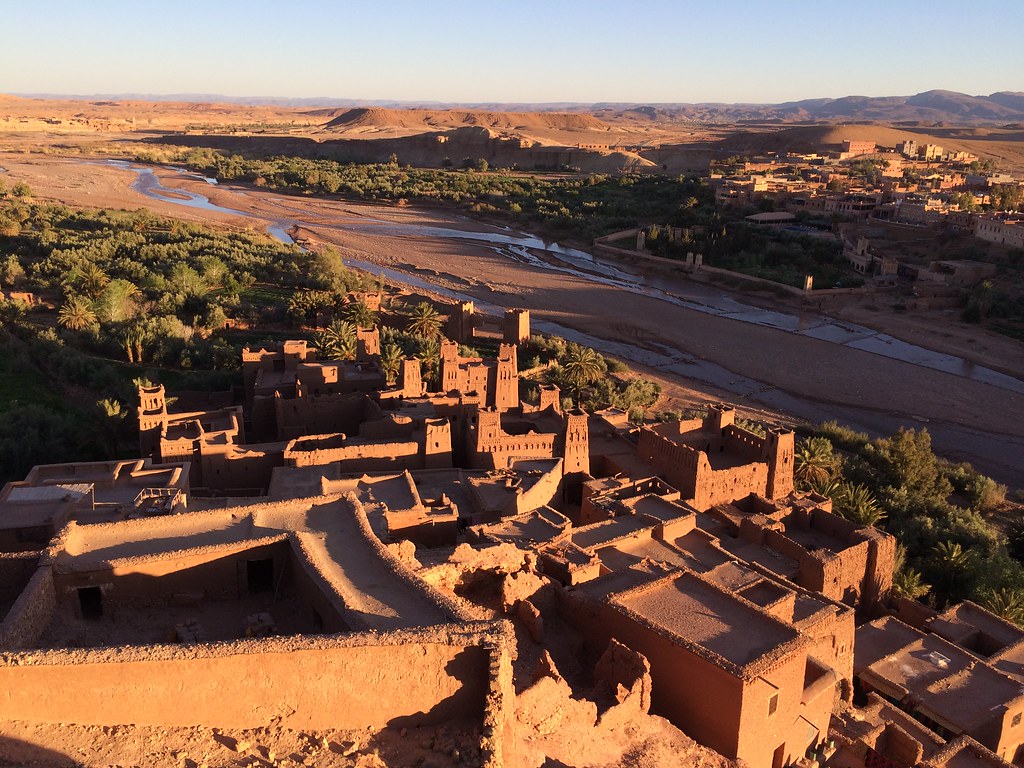 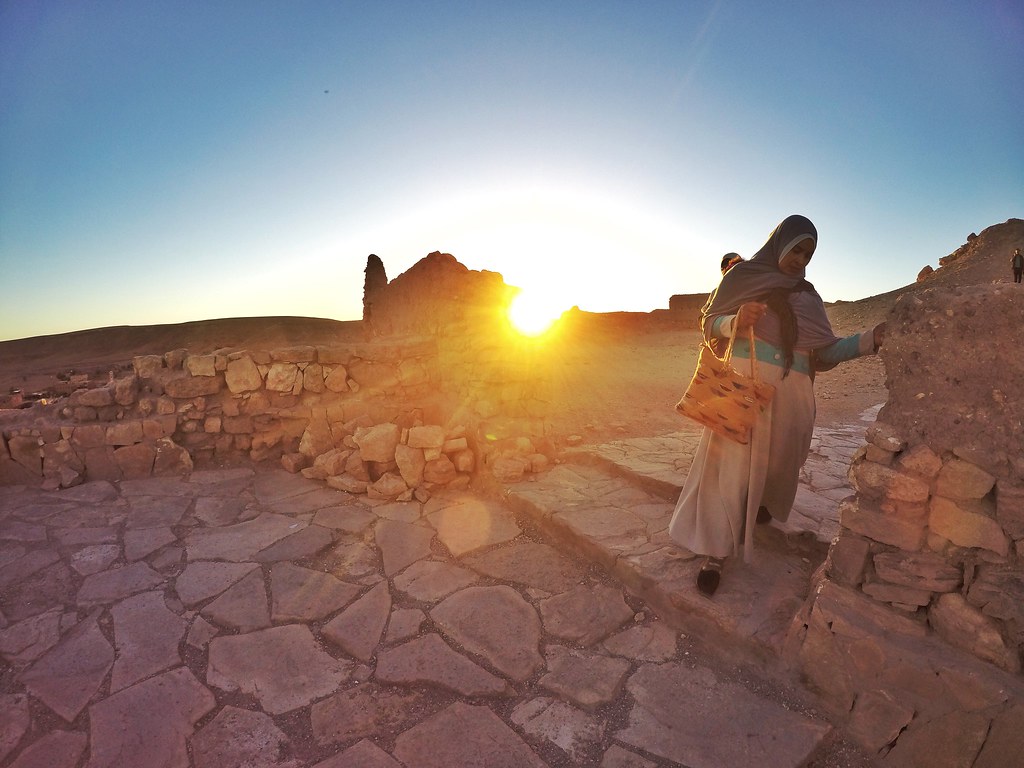