The weather has really warmed up in Morocco and the sun beat down on us as we slogged our bags up a dirt track to our hotel in Skoura’s Palmeraie. The view from the roof terrace was wonderful with a sea of palm trees and kasbahs below us and a long line of snow capped peaks in the distance. We got free bike rental at our hotel and a map to guide us around the maze of the Palmeraie. It’s a protected UNESCO site and known as the ‘Oasis of 1000 Palms’ with 15 acres of garden plots. 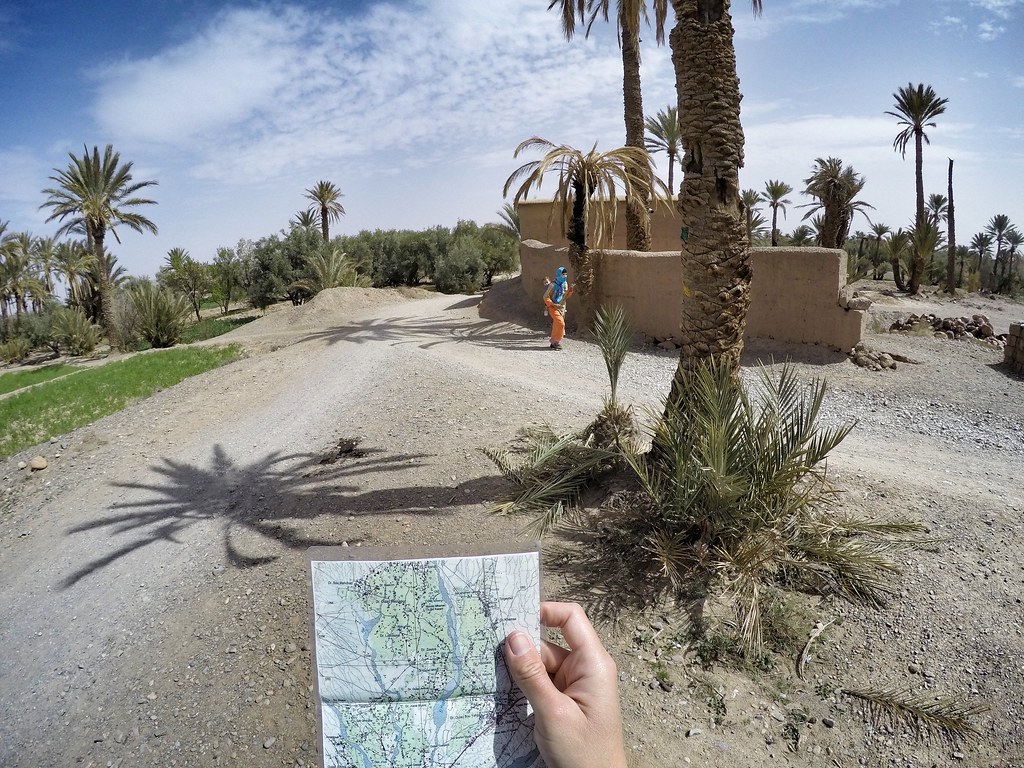 We set off on a dirt track and took random turns aiming eventually for a river. The track became extremely narrow, just a foot wide in places and slanted down towards the irrigation system. For me, a very wobbly cyclist, I felt like I was riding along a tight-rope, but somehow I didn’t fall into the water. The ancient irrigation system is used to water all the plots of land where locals grow crops and the palm trees offer shelter. We were heading way off track so we had to do a reversing manoeuvre along a bridge consisting of two rickety wooden planks. My tire slipped off the wood and the peddle jammed into my shin causing my ankle to bleed – we were only 5 minutes into the day trip!! 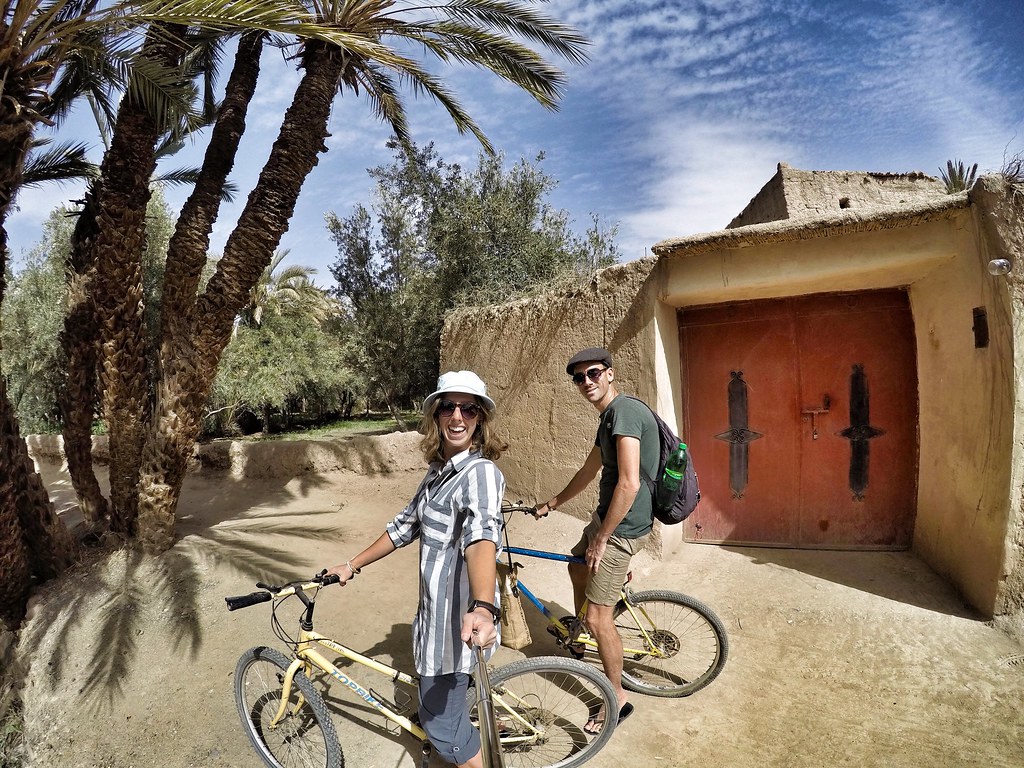 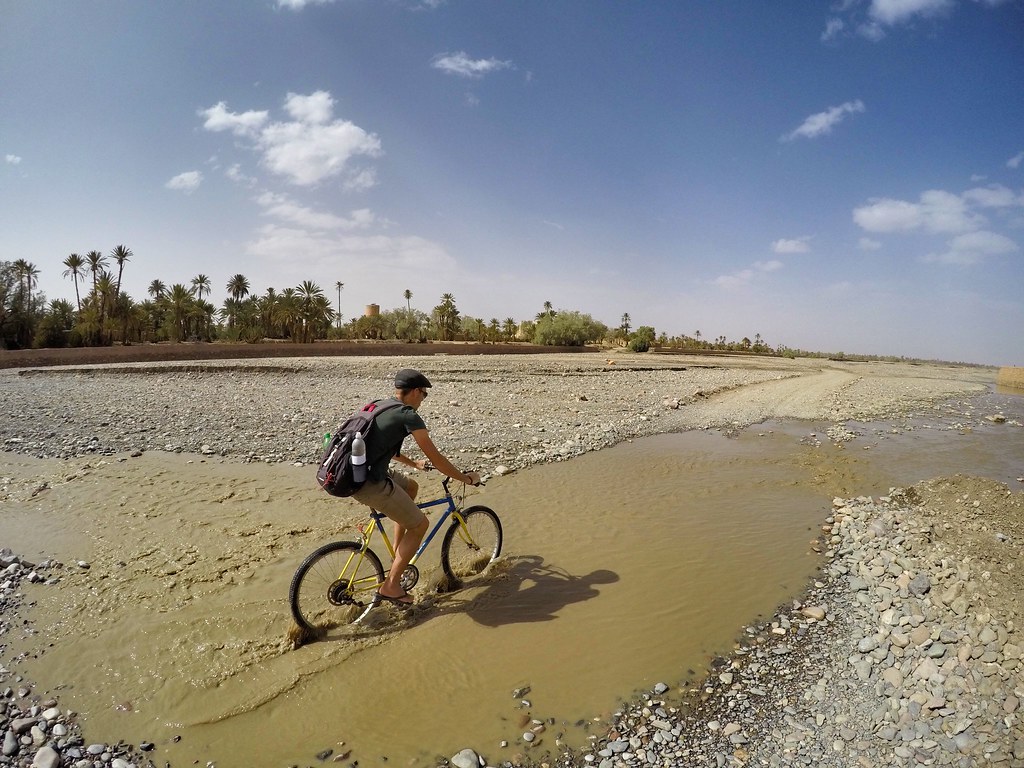 We passed lots of mud houses and beautiful kasbahs. Some were in mint condition while others were crumbled to the ground and looked like sandcastles dissolving in the rain. After making mud bricks in the desert we have a lot more appreciation for the craftsmanship of a mud house. The large mud kasbahs had turrets with intricate designs carved into them – my mud and sand mix wasn’t even strong enough to stick pebbles on it for a mosaic. We finally reached the river which has a concrete road running across the wide stony floor. There were large parts of it where the muddy water flowed over the river and it had quite a strong current. Craig just cycled right through, spraying muddy water off his tires towards me, while I tip-toed along. 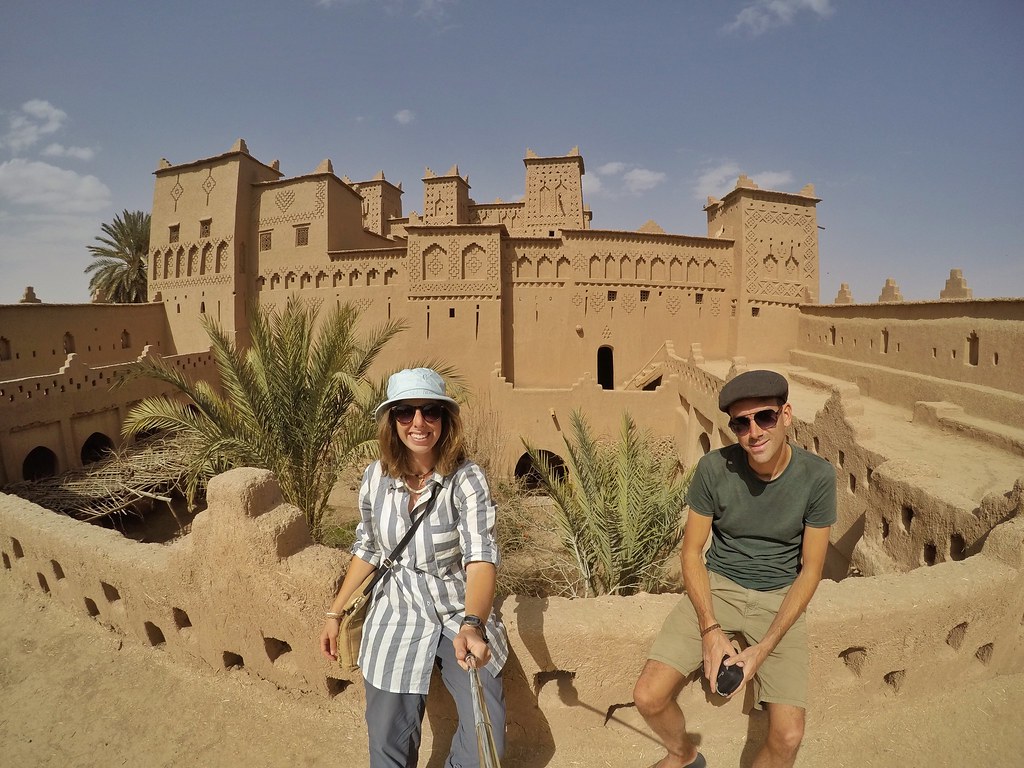 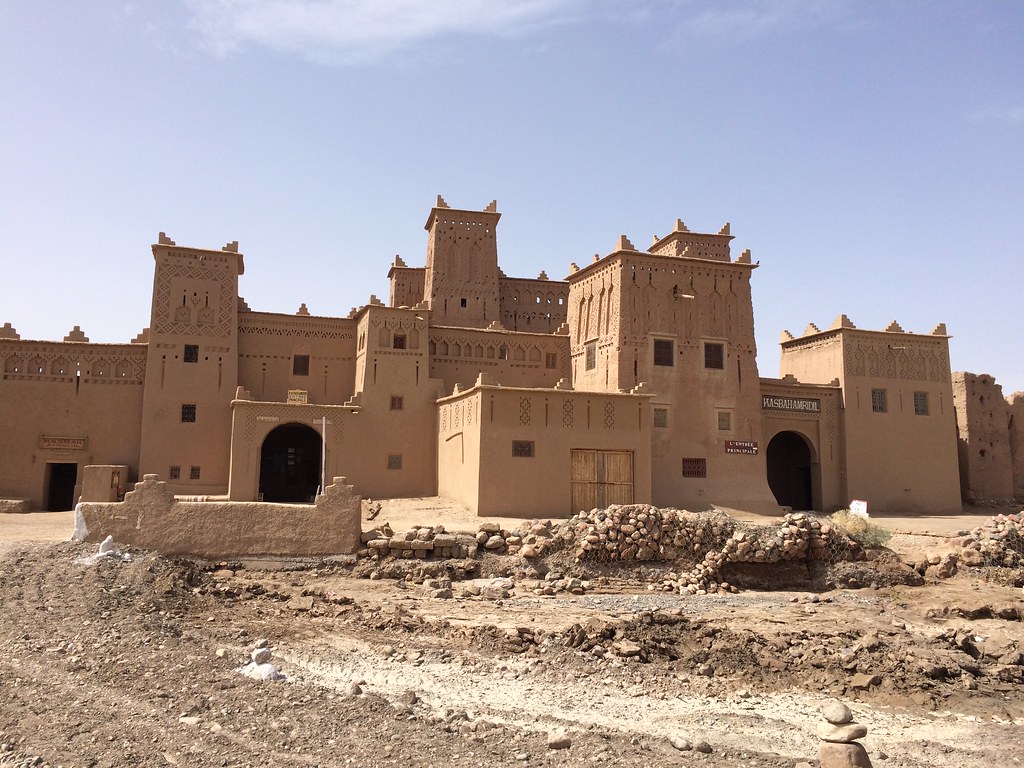 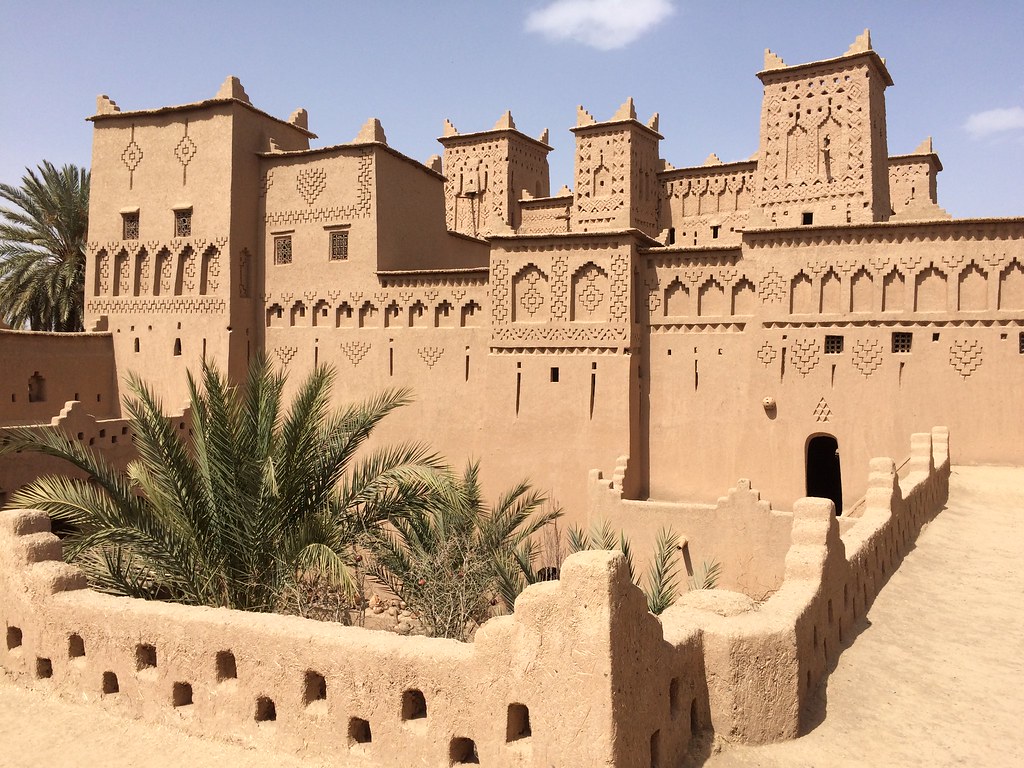 We did a big loop through the Palmeraie and ended up at Kasbah Amridil. It was a huge 17th century kasbah covered in fancy carvings, and one of moroccos most famous due to it being on the 50 Dirham bank note. It was just €1 entry and we were the only people visiting the place. There was a central courtyard and extremely steep, slanted steps leading up to an open walkway above the courtyard. The rooms were small and dark with alleys leading to various rooms and towers. We spotted two people atop one of the tallest towers but we couldn’t work out how they got there. Eventually we realised we had to exit and reenter at a different door but this is where we found out that the kasbah was a bit of a scam. They’d basically cut the large kasbah in half, and charged to see each side of it. We really weren’t happy with the way they did this and it was very misleading. One guy offered us two for one entry, making the entry a pitiful amount but we refused out of principle. The other side of the kasbah was the best for panoramic views of the Palmeraie with the distant snowy Atlas Mountains, but today was bizarrely hazy and the mountains had just vanished, if we hadn’t seen them yesterday we wouldn’t of known they were hiding behind the haze. So we left, and took a different route back along an even more makeshift road through the river bed. This one was just marked by painted rocks and the water gushed over the pebbly floor, pulling my tire wheels with it. The ‘road’ just came to an abrupt end and we were met by a steep wall of gravel, with such a sharp point to the top that it looked like a ridge of a spice pyramid in the souqs. We had to climb up the steep bank and dig our feet into the gravel to give us grip on the way down, dragging the bikes with us. It was a fun day exploring a very un-touristy corner of Morocco. 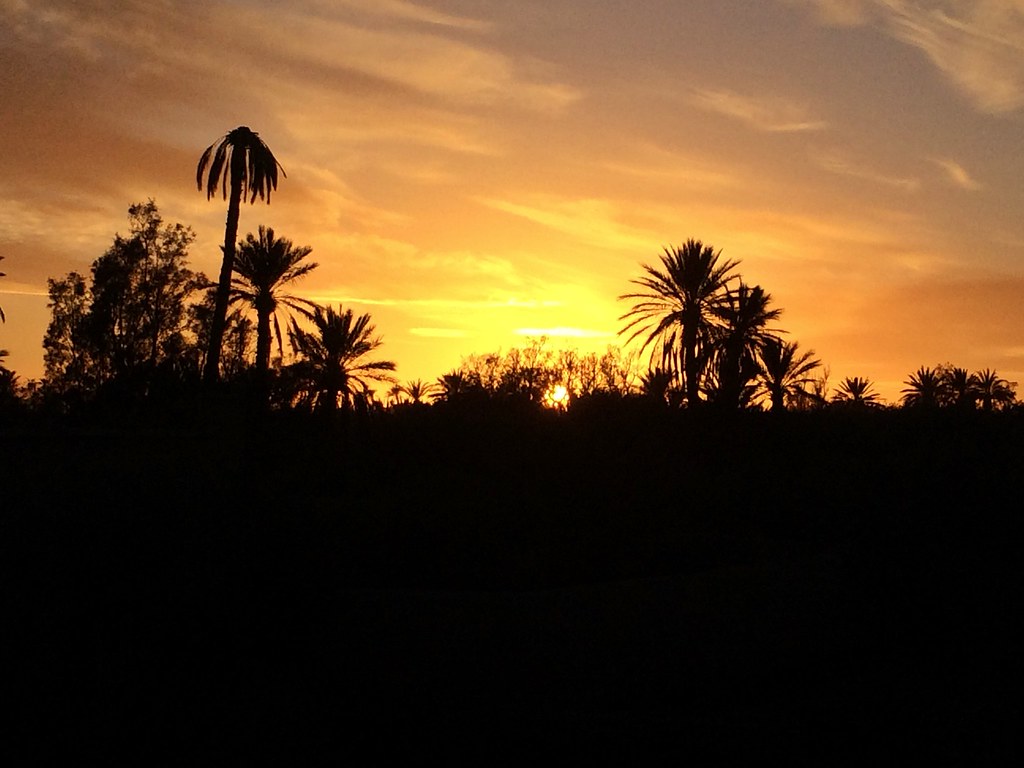 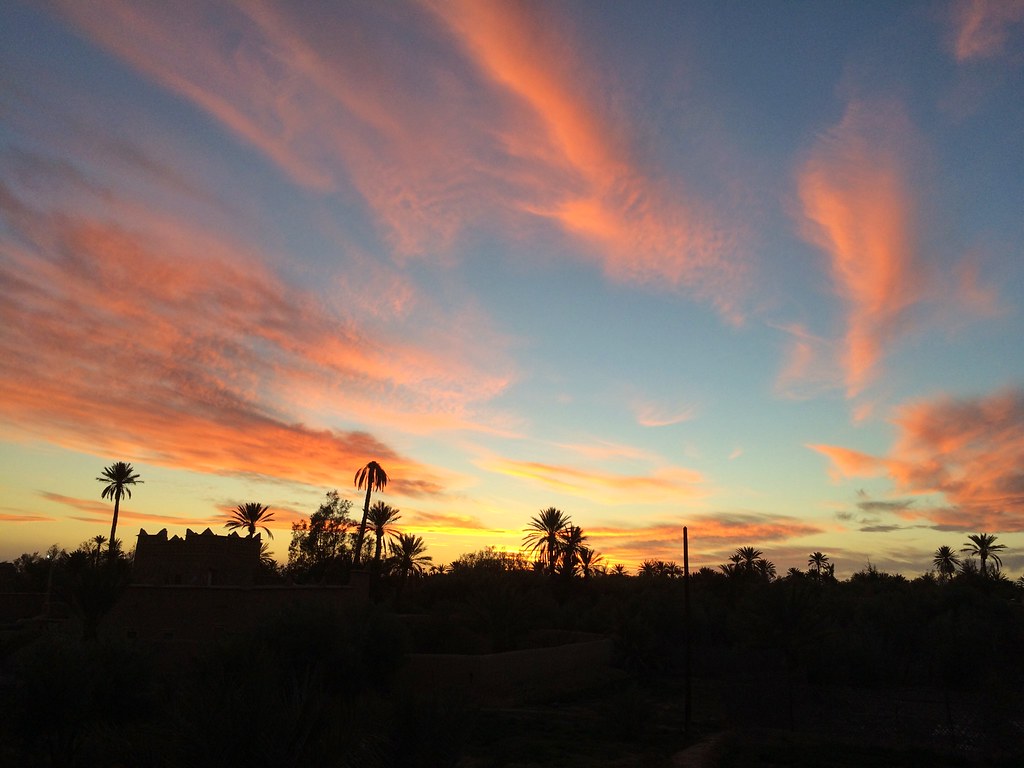 The next day we ventured north east to Tinerhir which is a good base to see Todra Gorge from. The local attire for this region was quite different to the norm and the ladies wore what looked like white bedsheets draped around them in a Greek goddess fashion. Underneath the robes were fleece night dress’ and I wondered what these women wore to bed, do they just untie their sheet and wrap it over themselves or is there a whole other outfit for bedtime? Anyway, we stayed in our cheapest hotel of Morocco at €10 for a double with a very slanted floor which made me feel travel sick just walking around the room.

The next day we hopped into a grand taxi for a 30 minute ride to the heart of Todra Gorge. We were dropped off right where the gorge narrowed and it was quite the sight. We couldn’t believe how tall it was, with giant walls of red rock rising 300m above us. The road wiggled through the gorge with a crystal clear river to its side. A section of the gorge had a scattering of houses built beneath the sheer walls, precariously close to fallen boulders which matched the size of the houses. One house was totally abandoned with a rock through it! 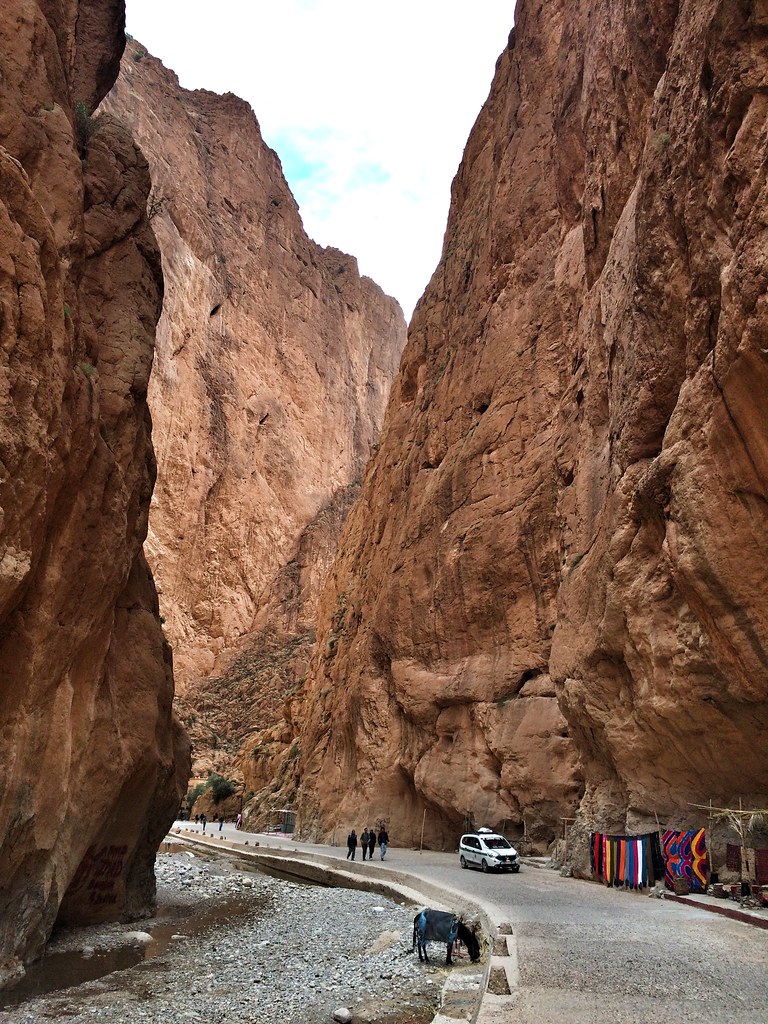 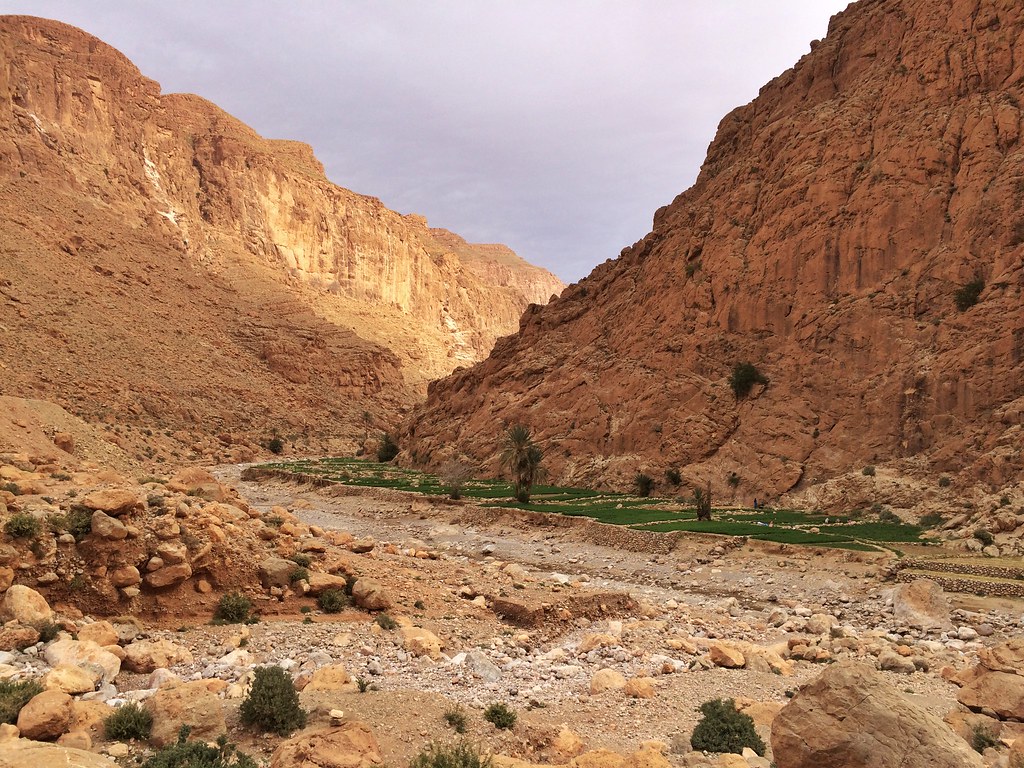 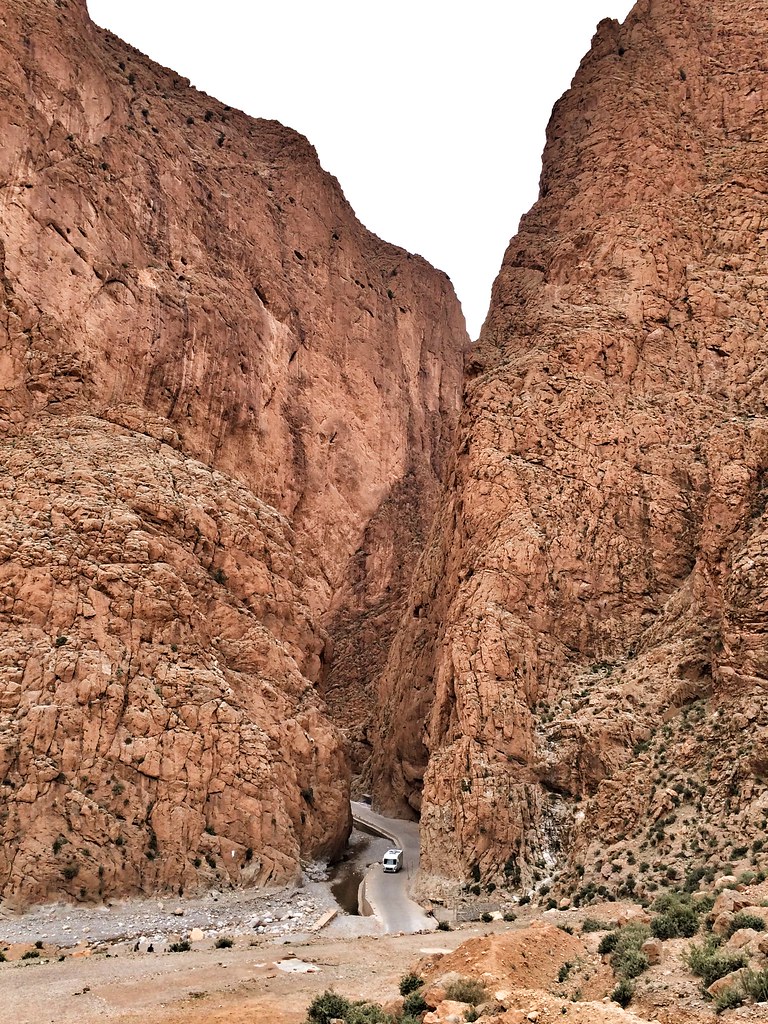 After the gorge narrowed to its thinnest point the scenery all opened out and we found some steps to the left which marked the start of the three hour hike we were doing. Berber ladies hiked down with their donkeys and horses and we followed their poo up the valley. It was a really cloudy morning but the higher we climbed the more the weather improved and suddenly the sun poked out and the redness of the rocks popped all around us – it was like the American Wild West! 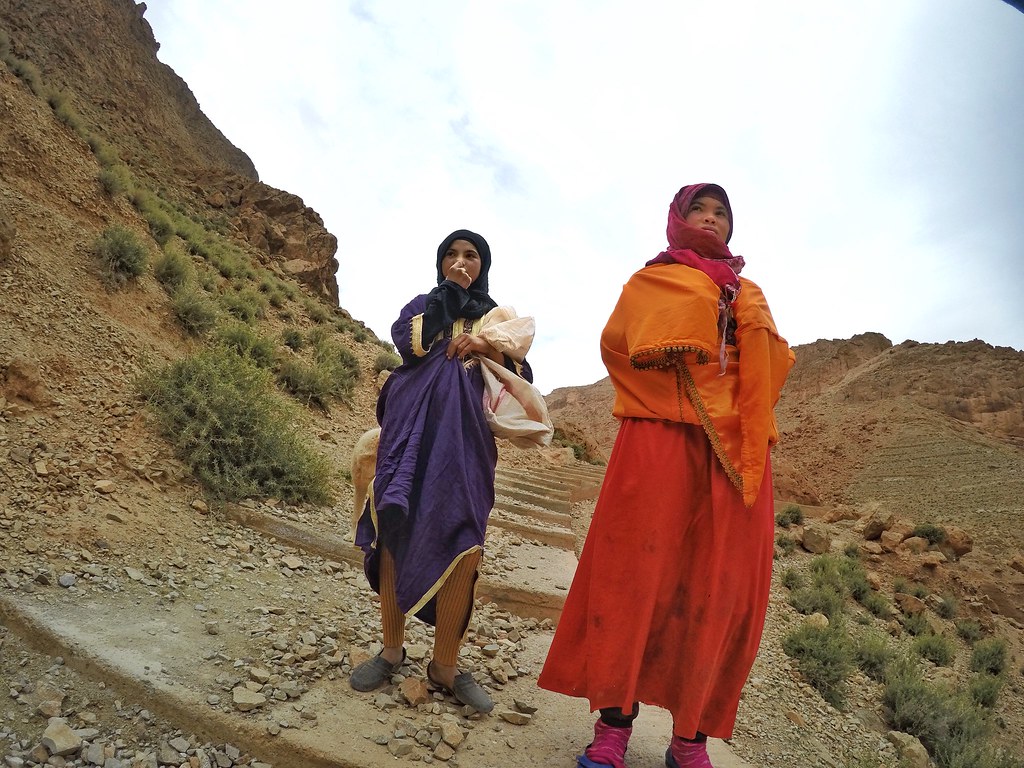 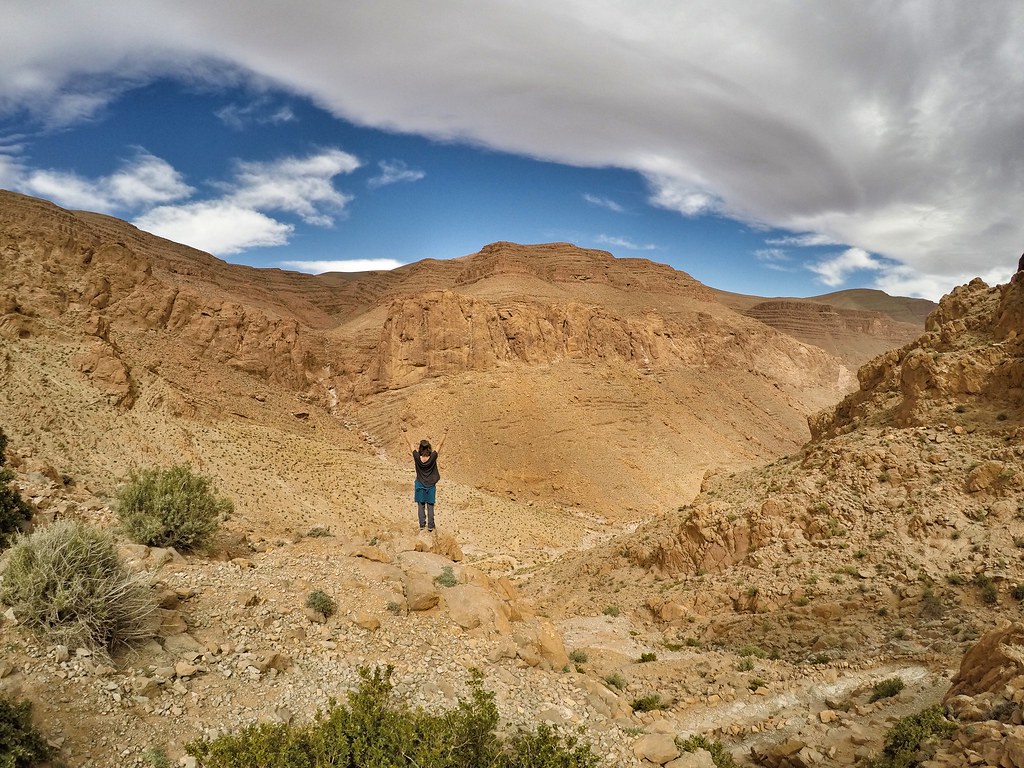 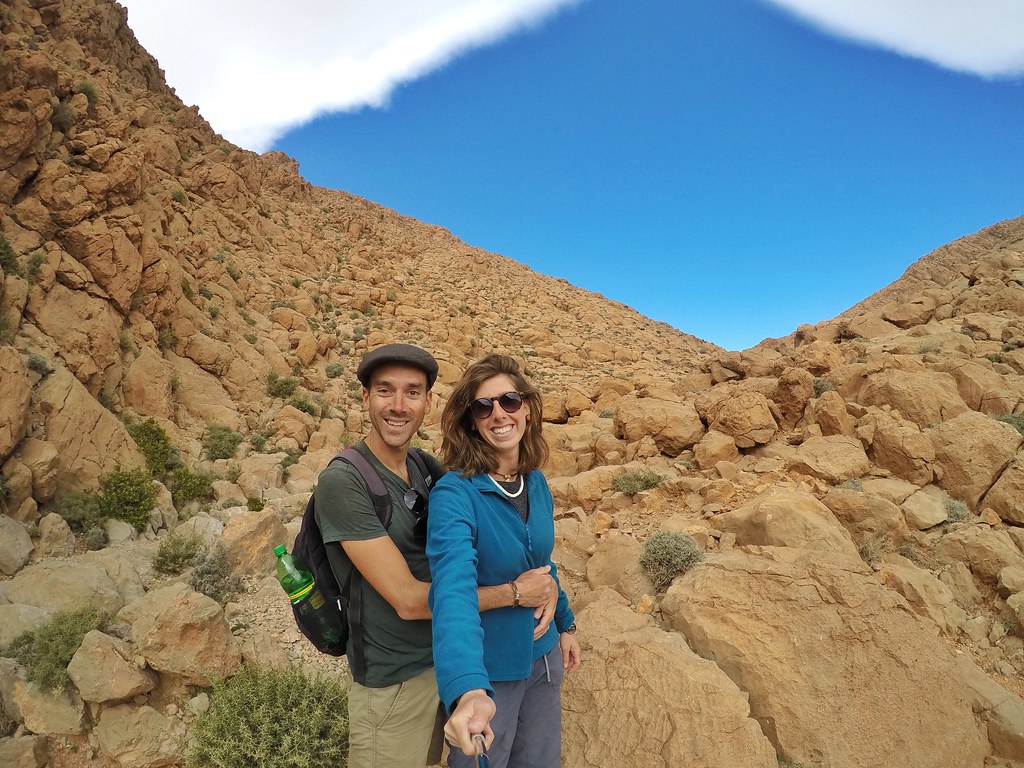 The trail became rather faint but I’d downloaded the maps.me app which is free and an absolute must for everyone. It had our trail marked out and we continued down a dry rocky gully until it dropped off into a sheer wall where a waterfall would flow in wet weather. We could of probably climbed down there but if the route came to a dead-end we wouldn’t of been able to climb back up. We could see the next section of our trail down another beautiful valley and eventually we found a route that cut across to it without having to backtrack. We approached the village at the start of the gorge and the views were incredible with a lush area of bright green crops watered by the river and a scattering of palm trees. The trail led us past pretty fields and alongside almond trees covered in candy coloured blossoms. It was a beautiful area to hike and we didn’t pass a single tourist on the trail, plus it was really easy flagging a mini van back into town. It’s rare to find such a beautiful spot so easily accessible. 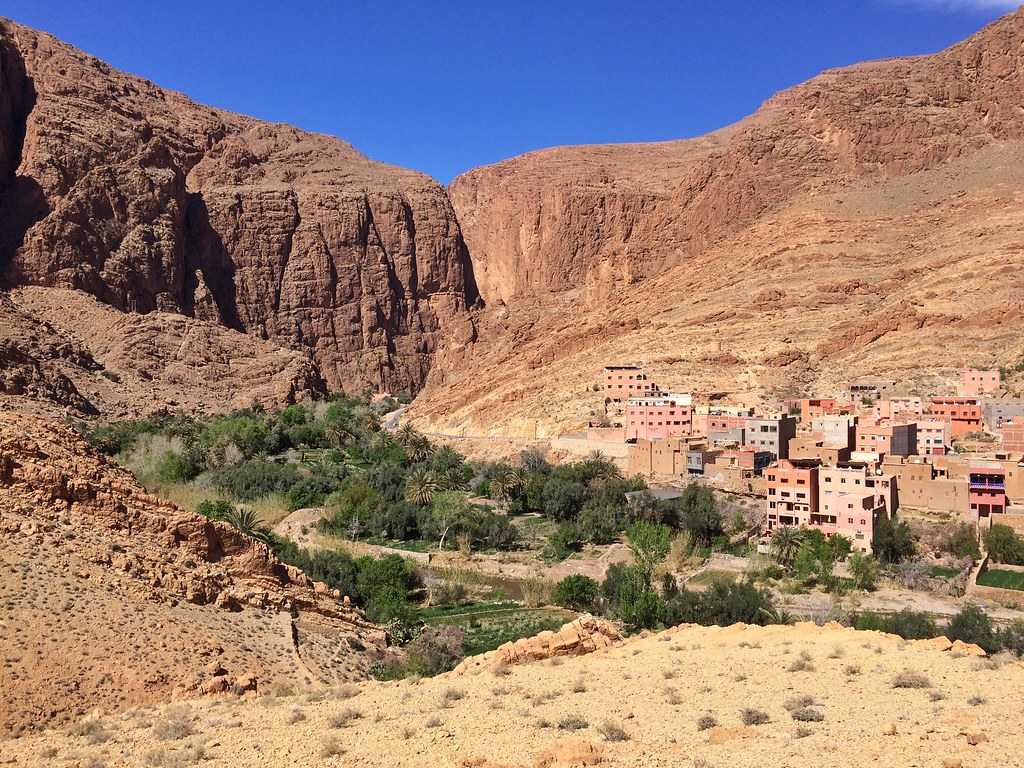 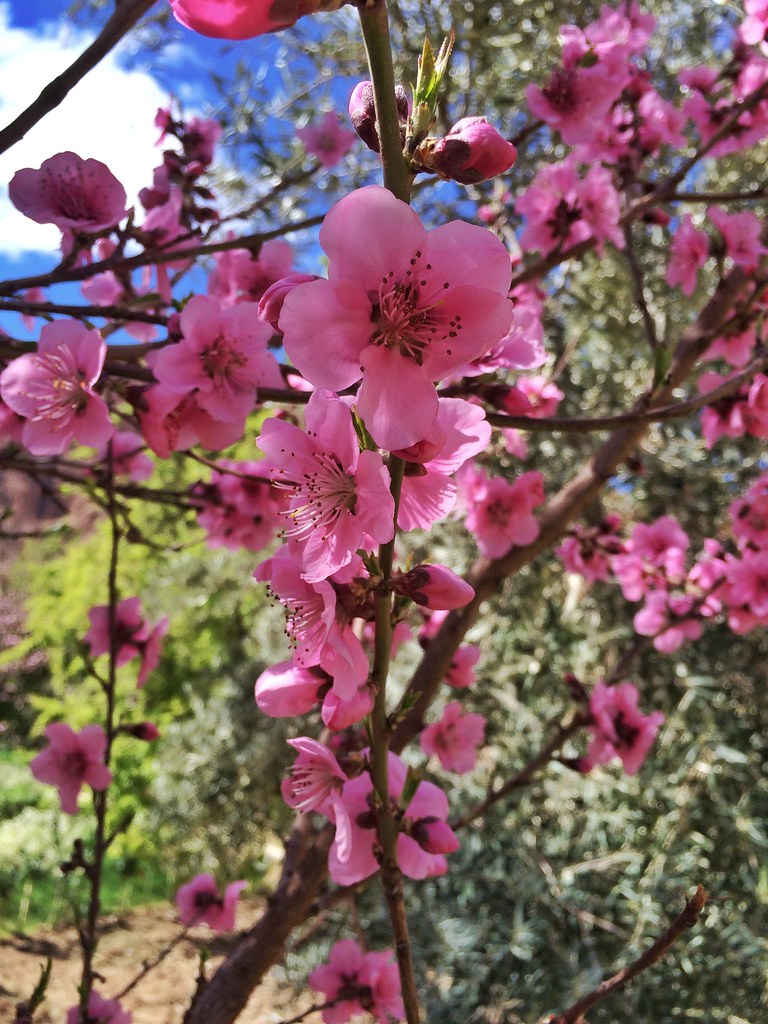 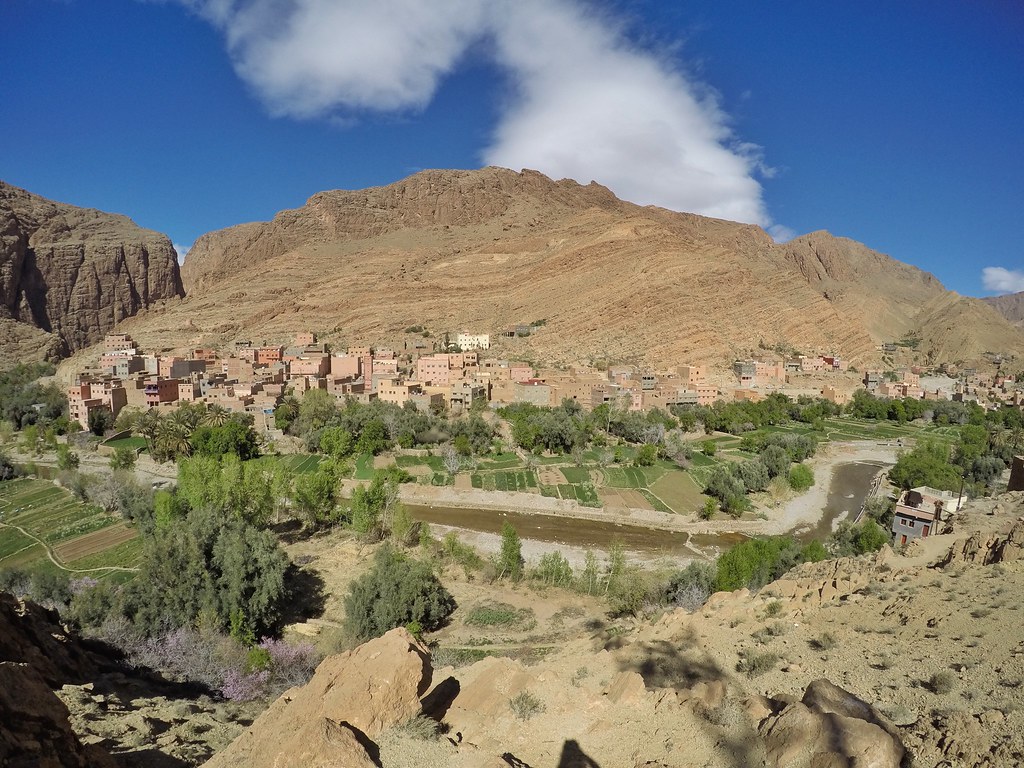