Someone at the camp made the hilarious point that they thought they’d get into some really deep and meaningful discussions while volunteering in the desert – and yet there we were laughing and joking around the campfire about shitting in the desert. 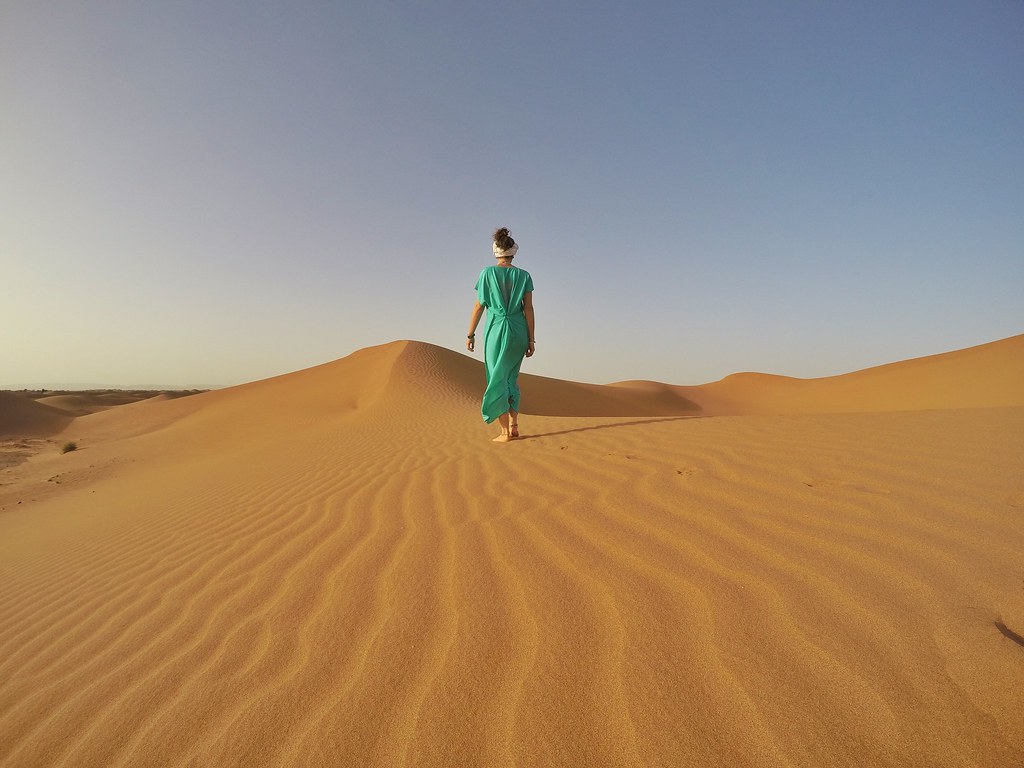 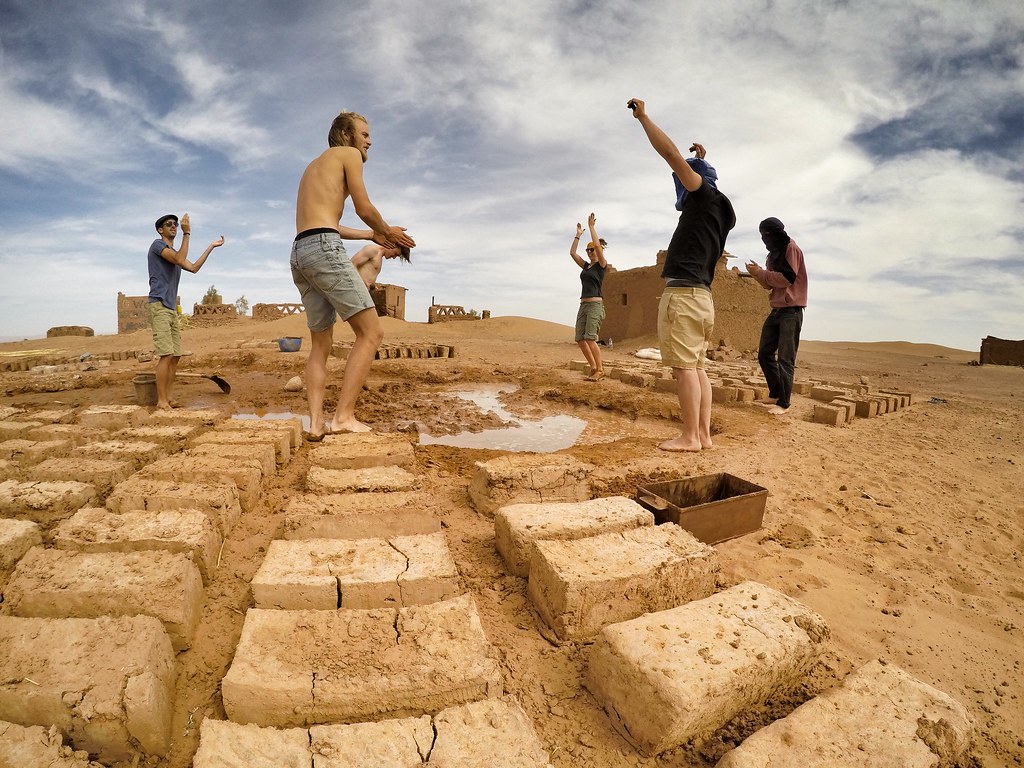 We’d take regular breaks from brick making to play with the puppies who have now come out to socialise. The job tasks on the website included animal care so we put a lot of love into this job! They were the cutest pups and unbelievably chubby things. Weezer was a great mum to them, always running over if she heard them whining and instantly relaxing when she saw us. All the dogs loved white people, but hated locals that they didn’t know. I guess some locals have treated them bad in the past and tourists have given them nothing but love. On a really hot day, Pedro walked over the dunes and into camp wearing his jellaba (traditional men’s robe) and shesh (turban) and the dogs ran after him, barking like mad until they realised he was a tourist! 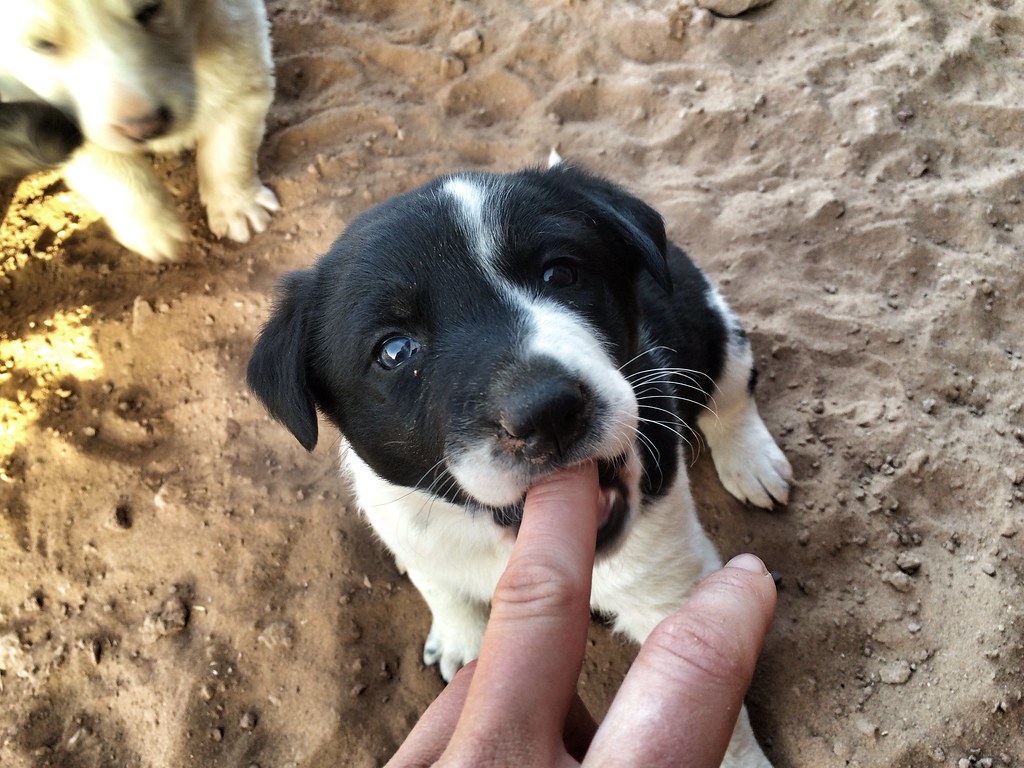 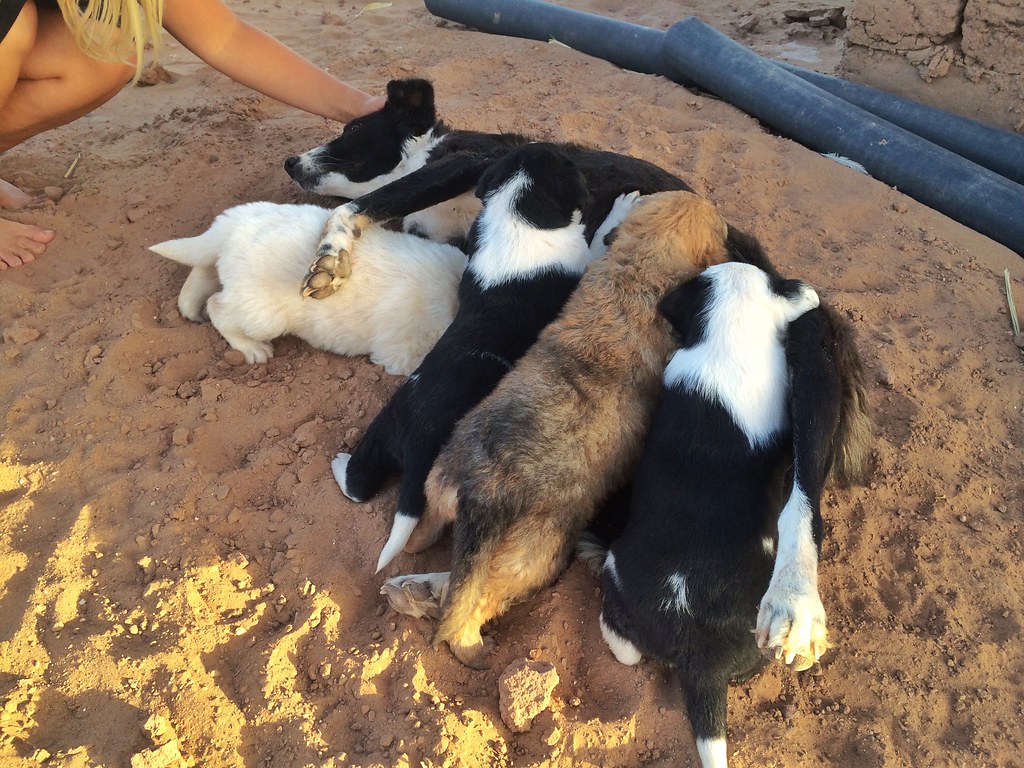 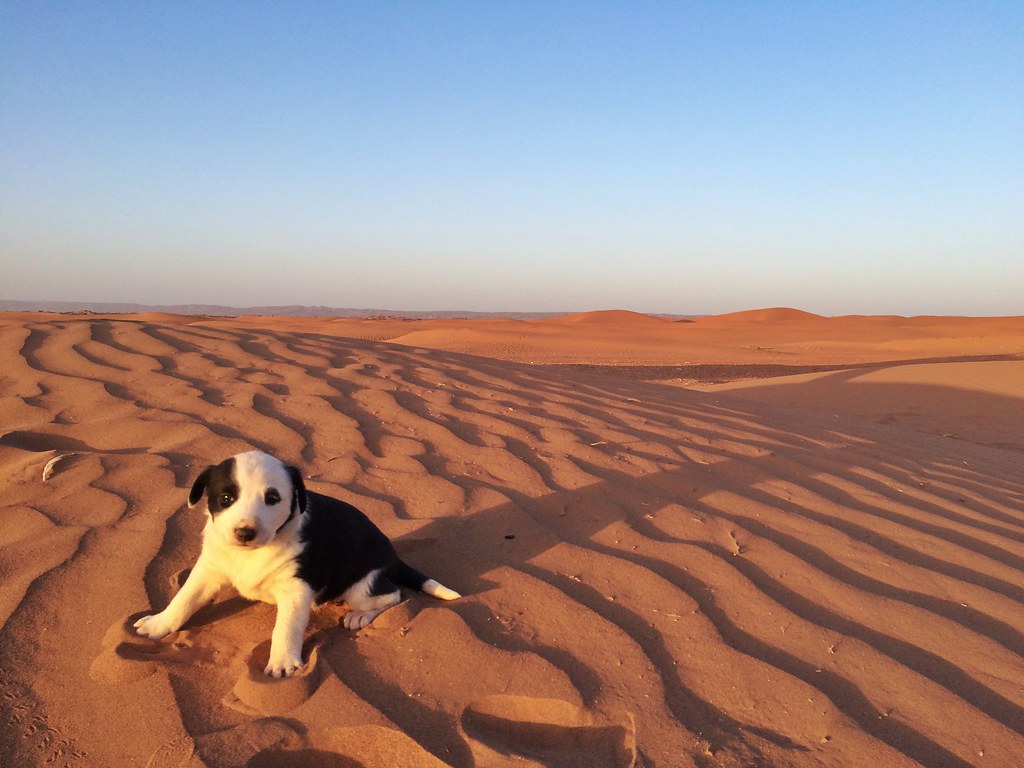 The dogs and the people are what made camp so enjoyable. One day we watched the sunset on the dunes with Jack and Sheila and headed back to camp, hearing a loud yelp behind us. Jack was shagging Sheila and his penis had locked inside her. So they both just looked up at us, almost blushing with embarrassment about the situation they were in. Jack clearly fell for Sheila even more after this occasion and the next few days were hilarious. Jack could not leave Sheila’s side, constantly sniffing her and making numerous attempts at humping her. Poor Sheila spent half her time with her lip curled up growling at the naughty boy who just stood above her wagging his tail wildly whilst she tried to rest in the shade. 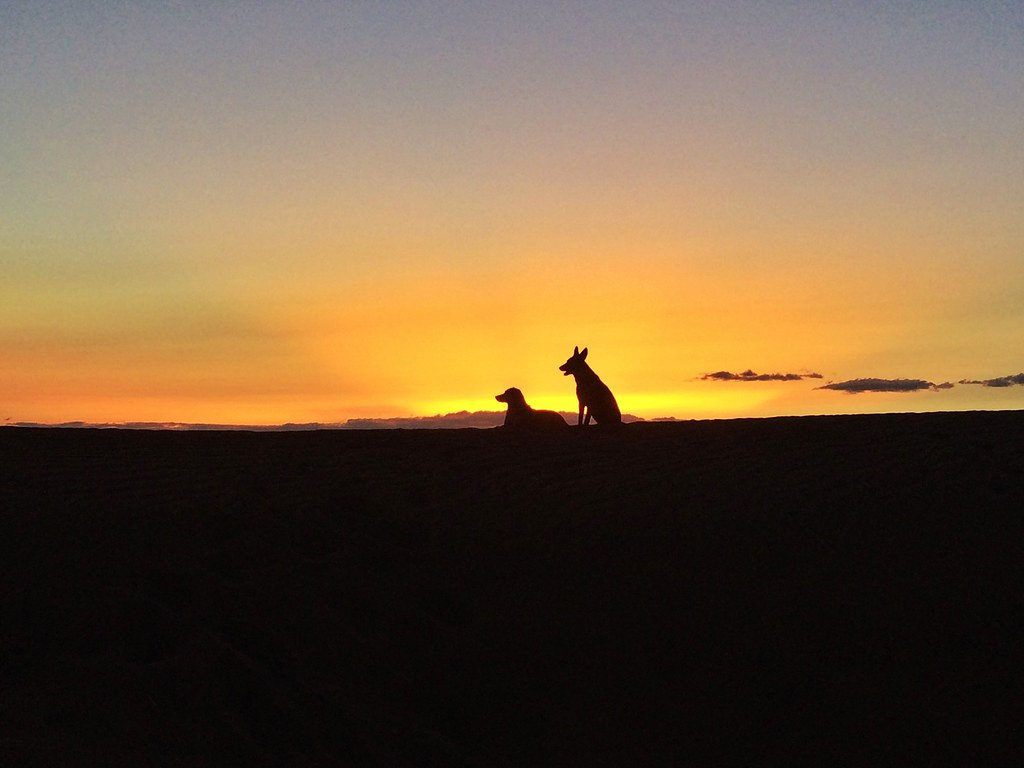 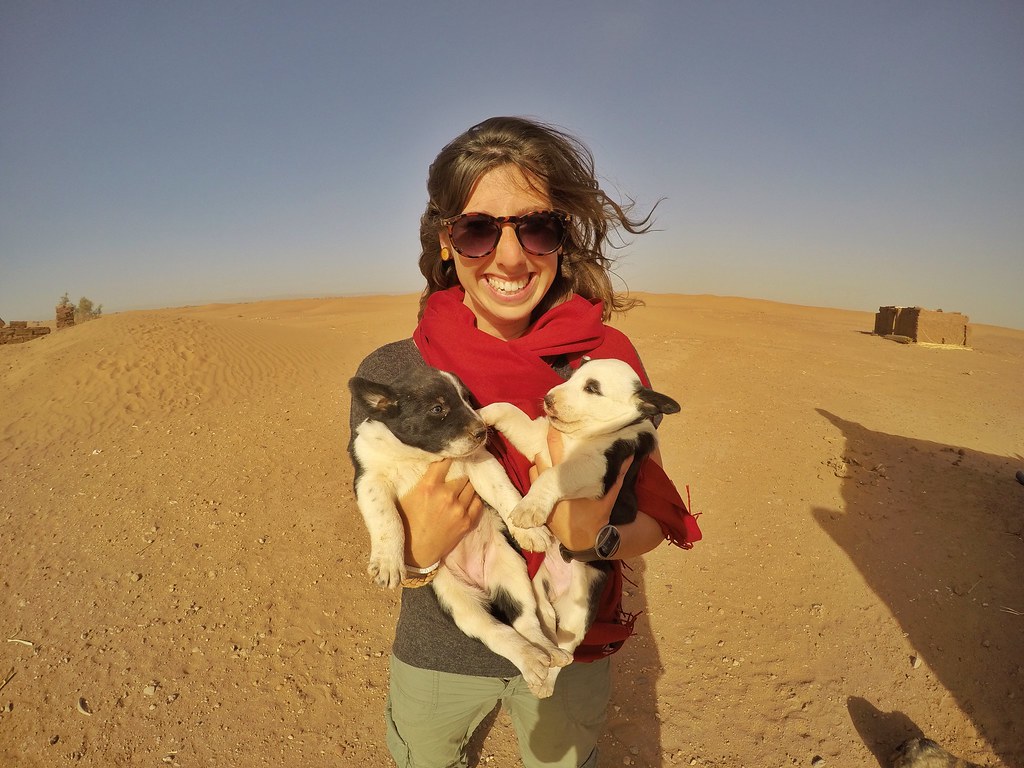 After two wonderful weeks at the desert camp it was time to leave. We’ll miss the chilled lifestyle we lived there; making a few bricks, playing cards, swinging in the hammock, walking in the dunes, cuddling the puppies, playing cards, star gazing, chatting, laughing and listening to music round the campfire. We certainly won’t miss the food, the wind that whipped up the sand, the silverfish in our hut, the cat shits, or the lack of hygiene. I’m surprised we didn’t get ill there, Craig had a couple rough days but it could of been a lot worse. There was no running water so washing up was done using bottles of salty water from the well and no washing up liquid. I didn’t see anyone else wash their hands and we’d all eat from one communal bowl. But, we’re still alive and we have some amazing memories, now It’s time to head to some civilisation and scrub my body clean. We had to wake at 5am for our bus, it was a still, dark morning and Ahmed insisted we join him for one last Saharan tea before we left. Him and Baba were already up for prayer so we downed the sweet shot and set off with a Canadian guy called Cameron along the sand track. He had a much better torch than us which was handy as ours needed constant winding up. It was a lot easier walking towards town as we had the village lights as a marker, quite a few people walked back at dark on our final night and struggled to find their way. Mem had to call Pino to ask him to get the vintage lamppost turned on so he could see where the camp was. Sheila and Weezer followed us the whole way which was lovely. We passed the distinct smell of death that we always winced at when we walked to the village. This area of the desert seemed to be a dumping ground for anything from rubbish to dead animals and we counted five dead camels on our last walk in the daylight. The dogs walked us through the village and up to the bus stop where they had a play with a group of stray dogs. Man I’m going to miss these amazing dogs. 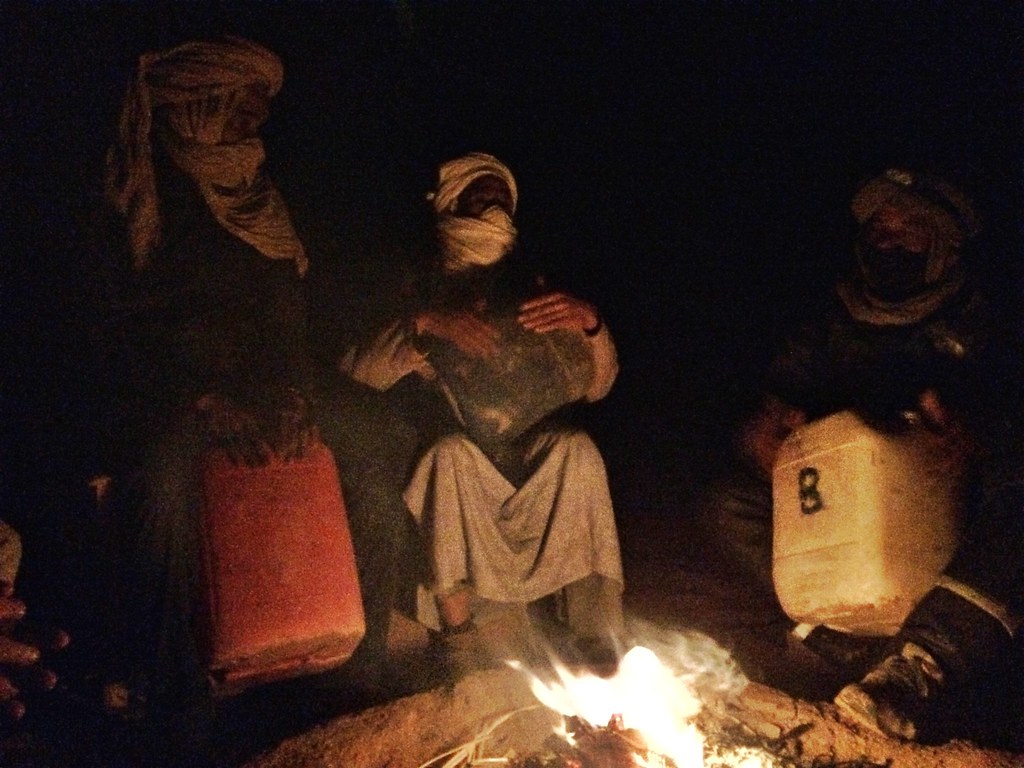 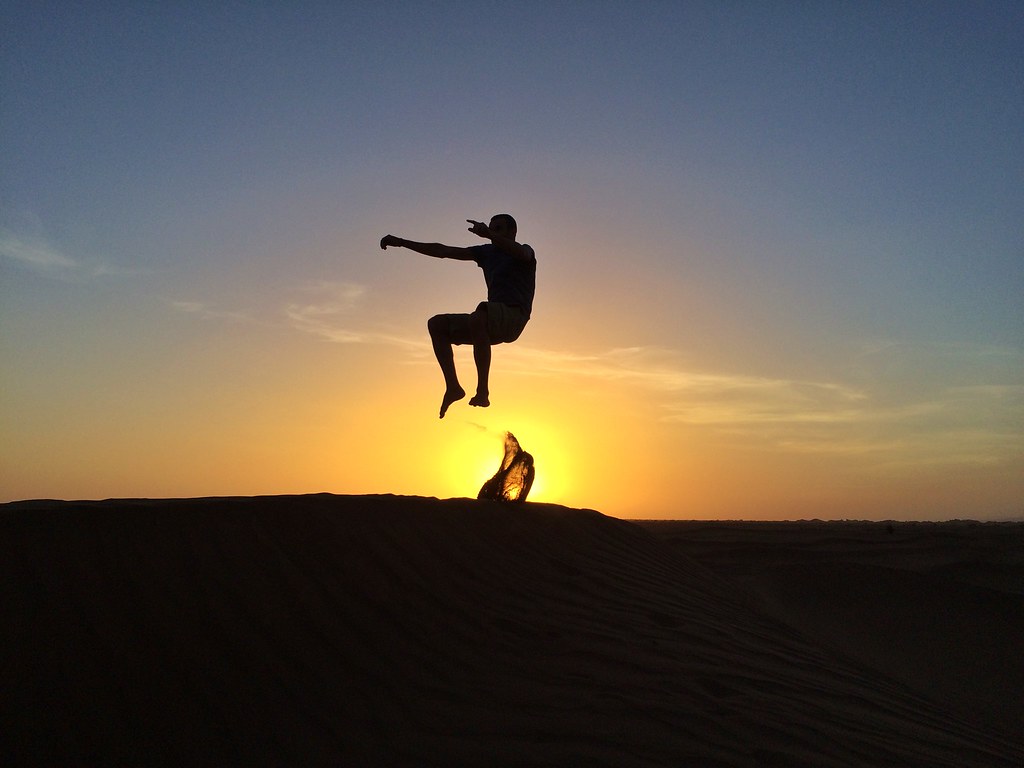 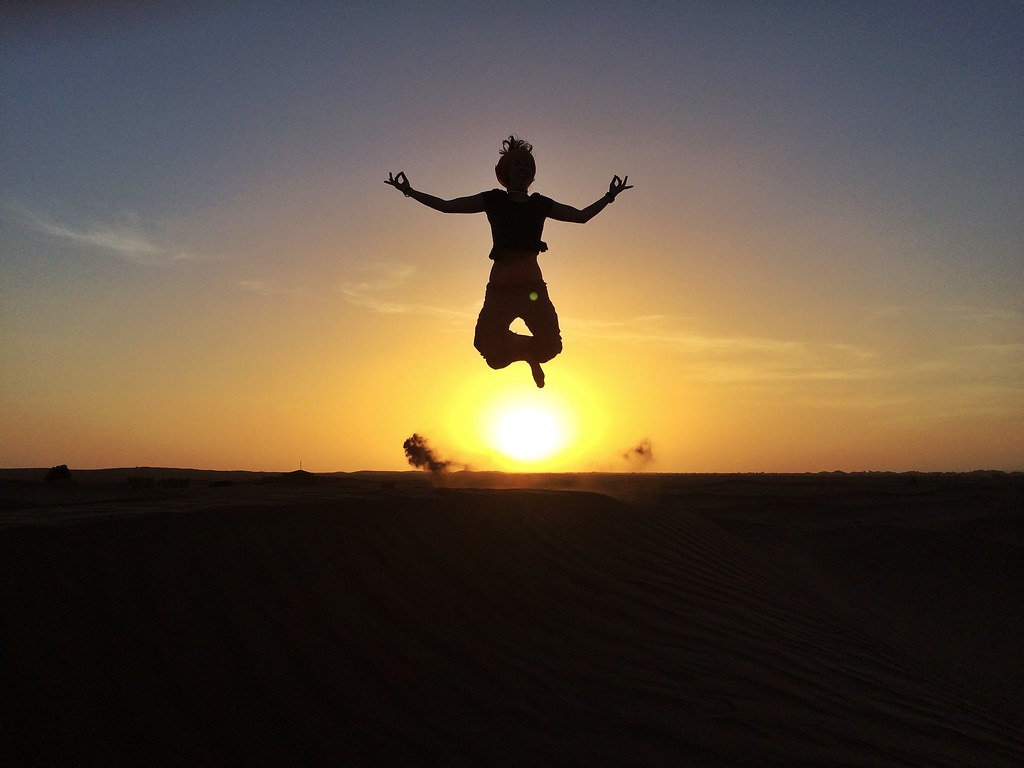