e wanted to extend our stay in Morocco by doing some volunteering and our first port of call for this was a small Berber village in the foothills of the Atlas Mountains. It actually didn’t involve any work, but we found it on the volunteering website we use. Instead of working we had to pay about €13 each which included accommodation, all meals and activities so for us it was cheaper than a normal day in Morocco and we could learn about Berber culture. From Marrakesh we caught a grand taxi an hour and a half south towards Imintanout. The snowy peaks of the Atlas Mountains dominated the west and we were soon dropped off at a dusty cross roads. We had no idea how close we were to the village so we wandered along a dirt track and tried to ask a little cafe if we could borrow their phone. We couldn’t. But thankfully a passer by spoke English and said the Berber Culture Centre where we were staying was just up the road. So we waddled along with our backpacks until a cute chap that looked a bit like a Moroccan version of Mr Burns from the Simpsons came and greeted us. His name was Brahim and he only spoke Berber, so we got by with smiles. The family that run the centre were actually away celebrating a friends first visit to Mecca but thankfully a French guy called Ben was already there and could tell us what to expect. 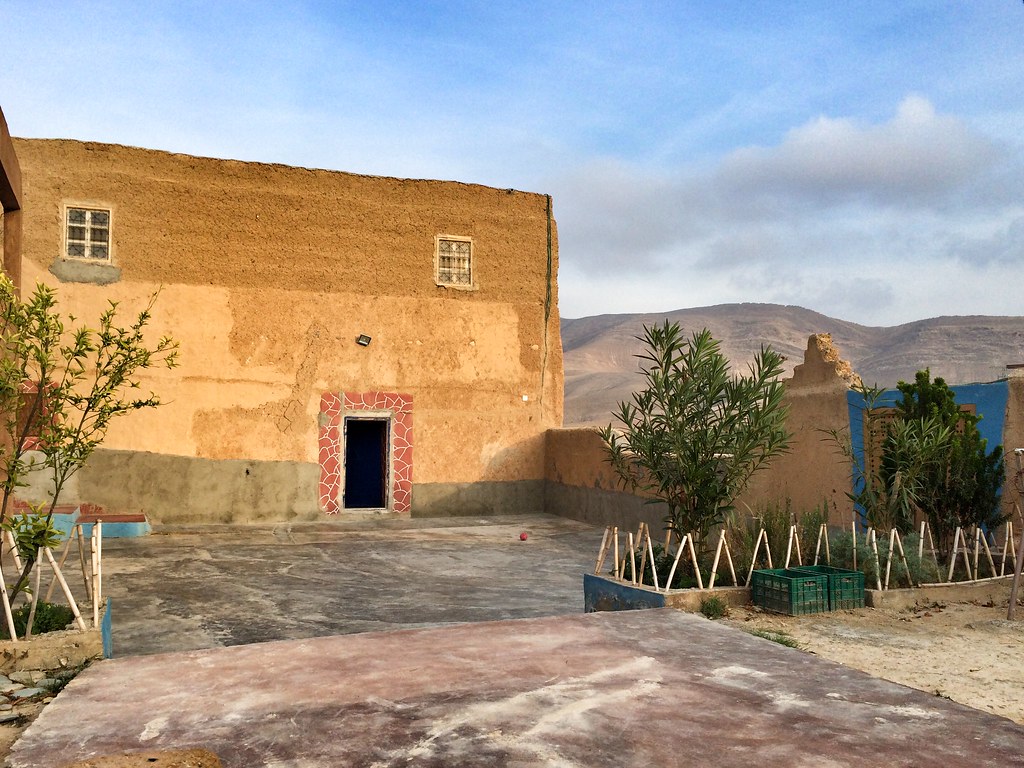 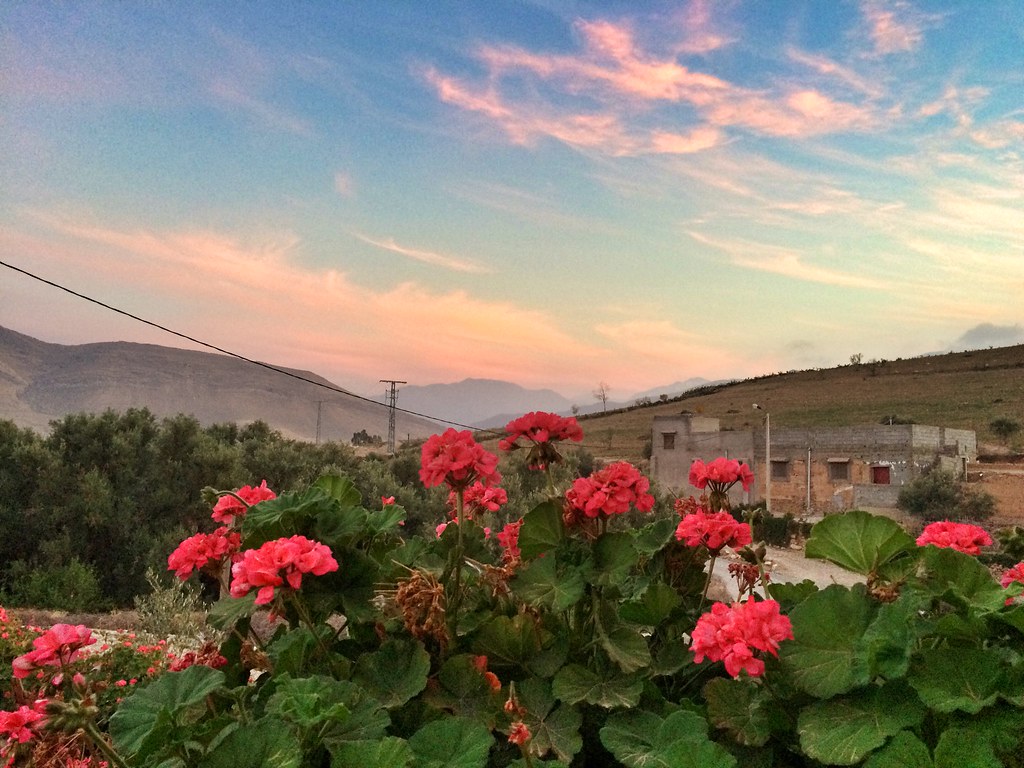 After a very sweet welcome tea and pastries the four of us went for a sunset stroll through the village. The surroundings were beautiful with the mountains glowing orange in the setting sun and the distant snowy peaks of the High Atlas Mountains. We were quickly greeted by a super friendly dog called Sofie who jiggled with excitement and gave us a big smile showing all her front teeth. Sofie had given birth just over a week ago and had 10 hand-size puppies hiding under a bundle of sticks. We passed another dog happy to see us, so we encouraged her over to join our walk. We gave her a stroke and then she strolled ahead and in unison we all said “ahhhh! Eeew!” The poor thing had clearly experienced issues giving birth and had a serious prolapse that was unbelievably raw. It was enough to put the biggest steak lover off meat. Thankfully we had a vegetarian tagine for dinner and for the first time in Morocco we ate the proper way – with our hands, using bread as our cutlery to scoop up goodies. 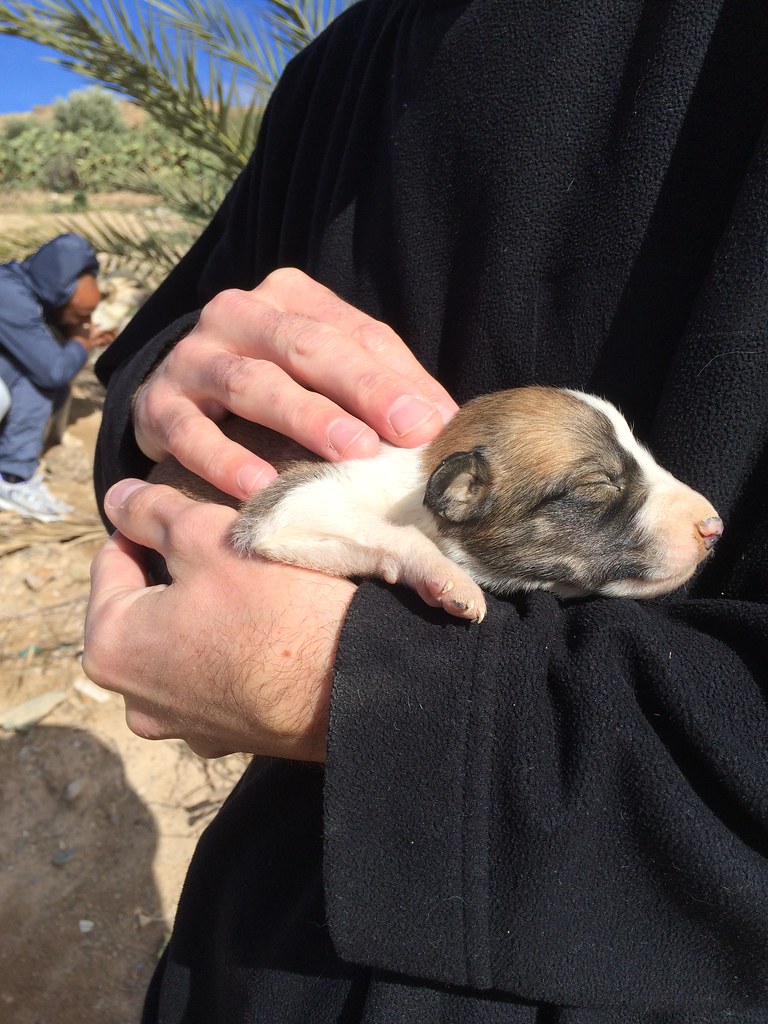 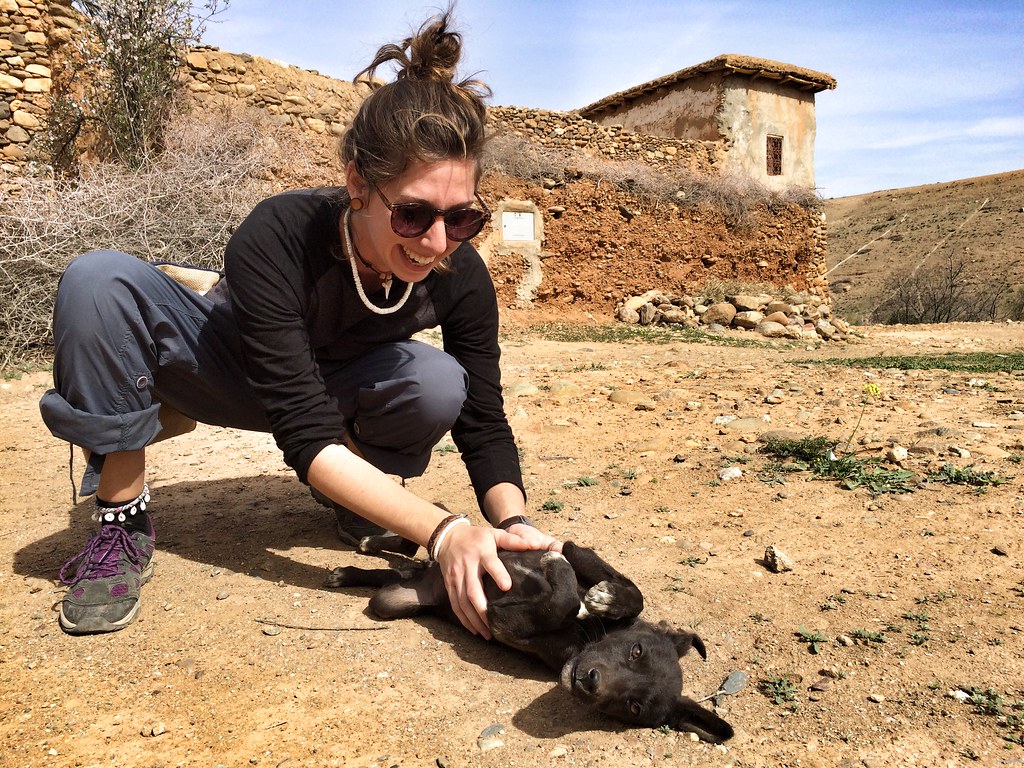 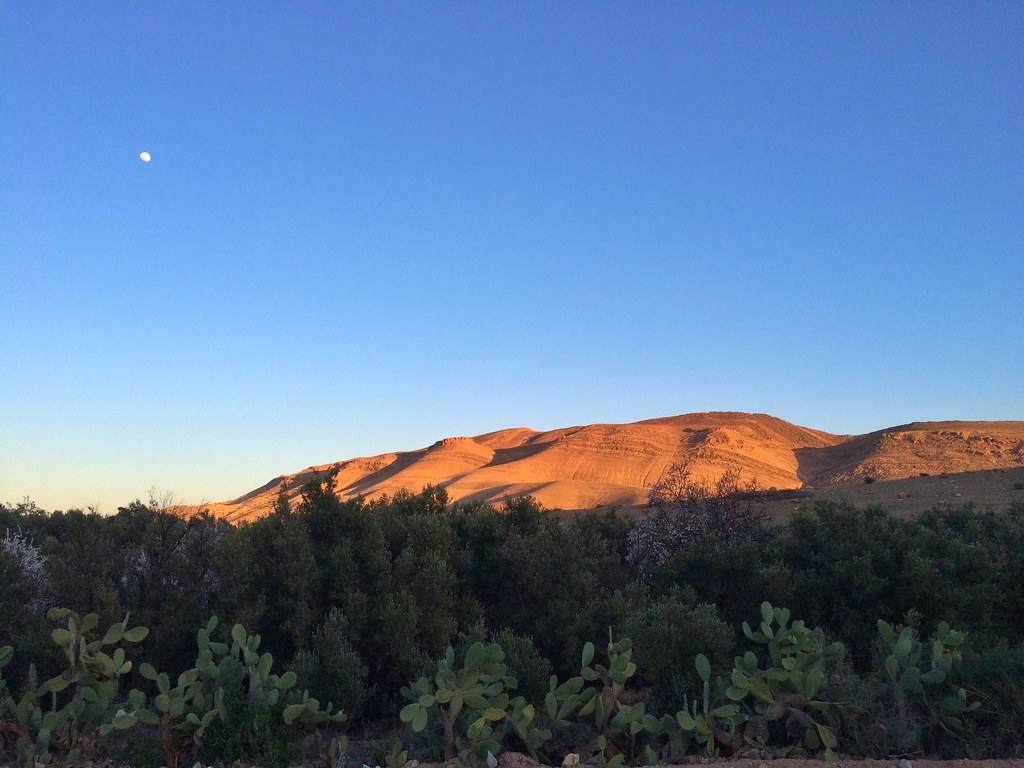 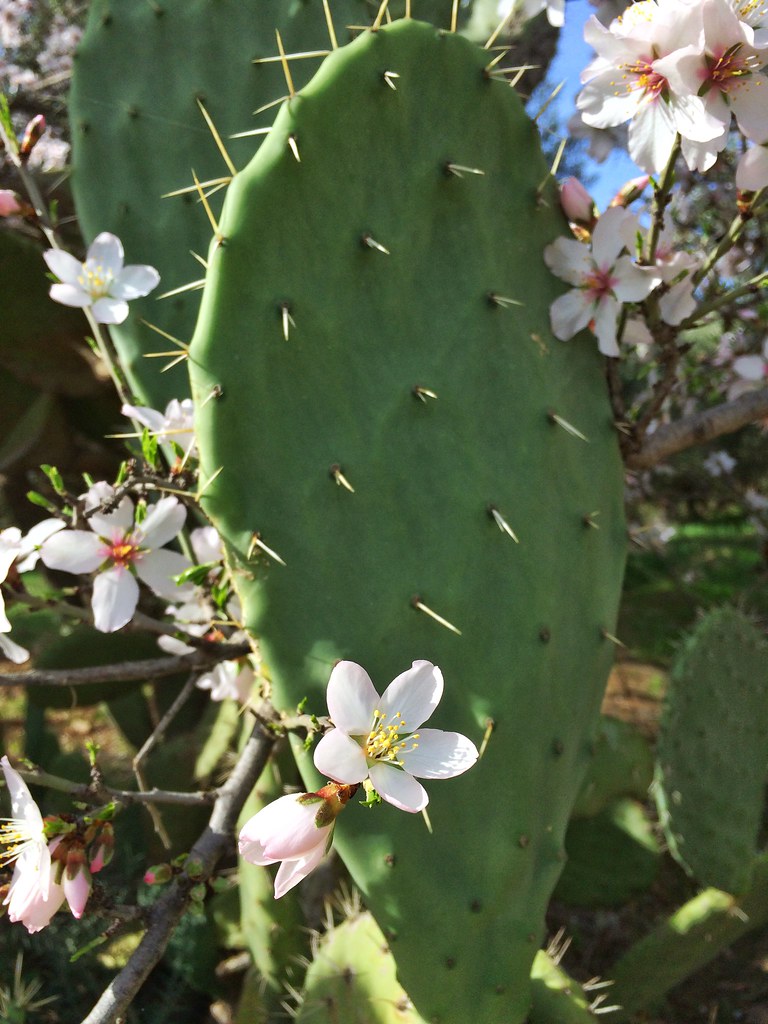 For our first day in the village we set off on a hike with Ben. There was a small mountain across the river where a small cave was visible near the top and that was our aim. We meandered through the rustic village and passed some very sweet locals. One of which was an old lady in the most colourful outfit with sweet little curls poking out beneath her pink bandana. The boys said Salam which is Arabic for hello and I tried out my newly learnt Berber word for Hi which is Azul and her face lit up in a huge toothless smile. She was very happy to pose for a photo, dropping her walking stick and raising her head up to the air. 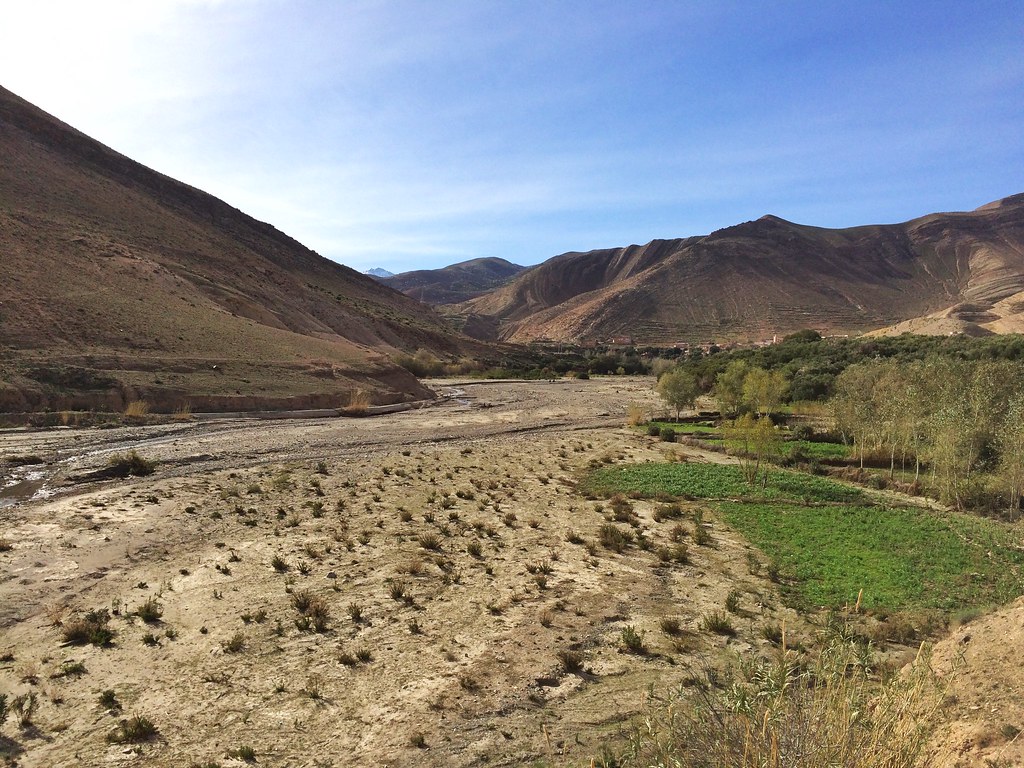 We crossed a dusty river bed where there was a small trickle of water to jump over and then the climb began. There was no trail and some pretty steep sections to climb up but we soon made it to the ‘cave’. It wasn’t much of a cave though and looked like a lot of precariously balanced rocks covered in graffiti. The view down to our village was just barren and beige, with a cluster of buildings, the dusty riverbed and a thick line of greenery alongside the river. Just a little climb further up and we reached the top where we stood on the edge of a cliff. The view was pretty incredible with the valley below us, red-rock mountains, and a sort of little oasis surrounding the river. There were even some snowy peaks of the high atlas in the distance. The hike down was a lot quicker but involved scrambling down a boulder riddled gorge, passing a swarm of wasps and a super fast snake. 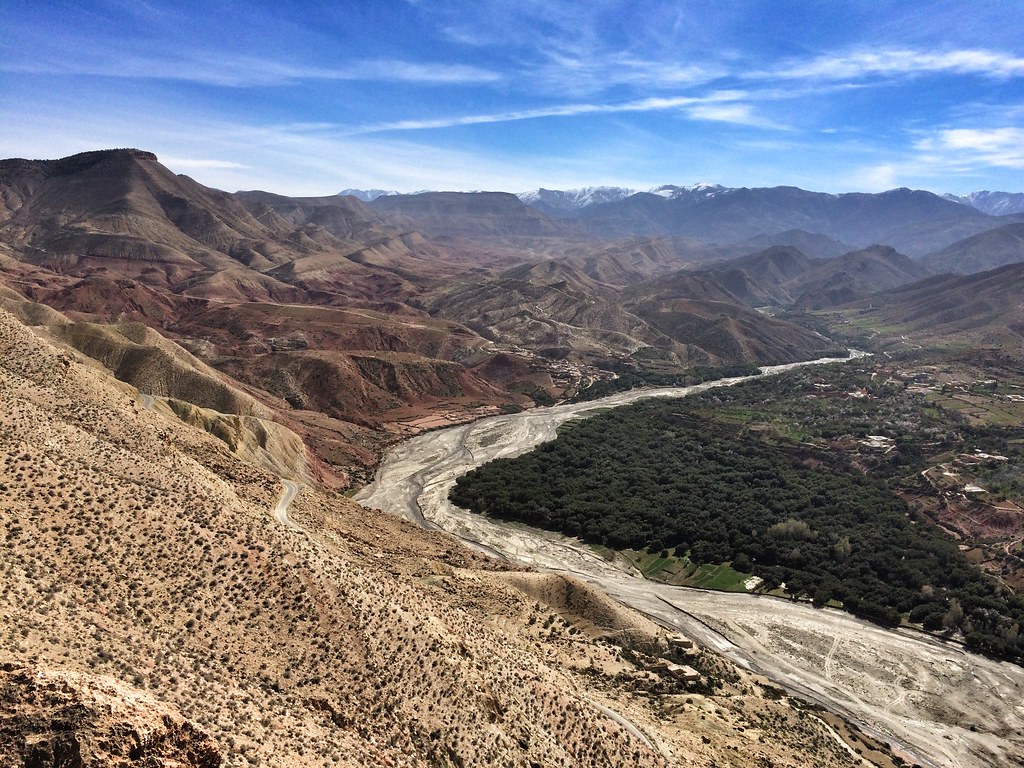 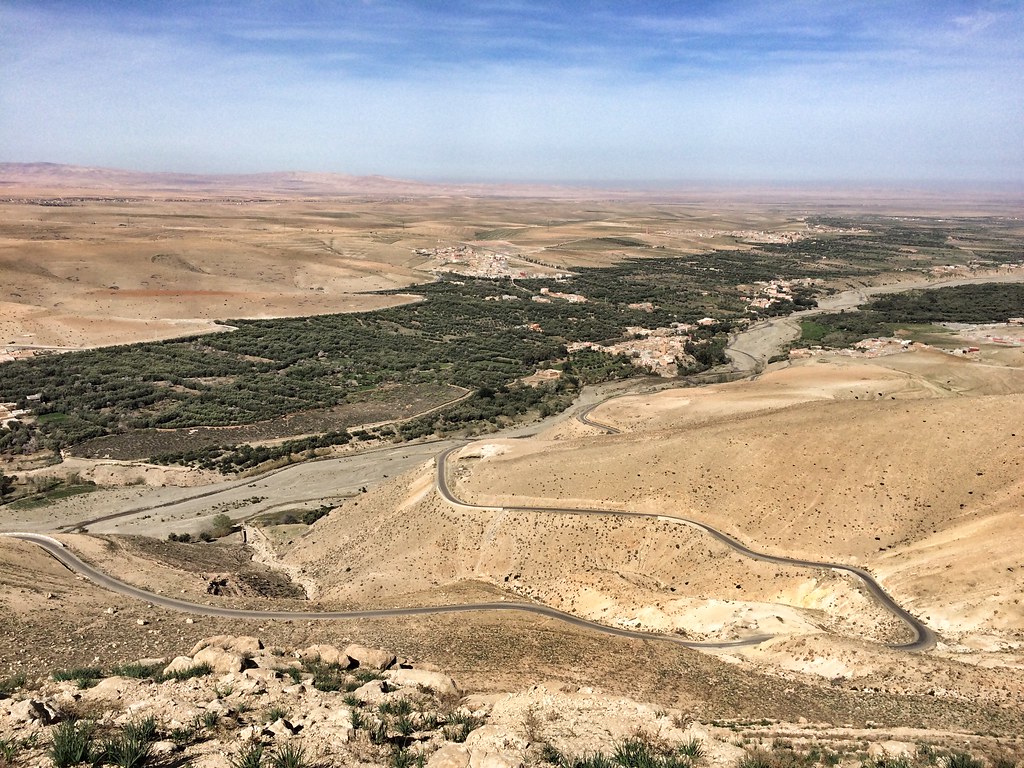 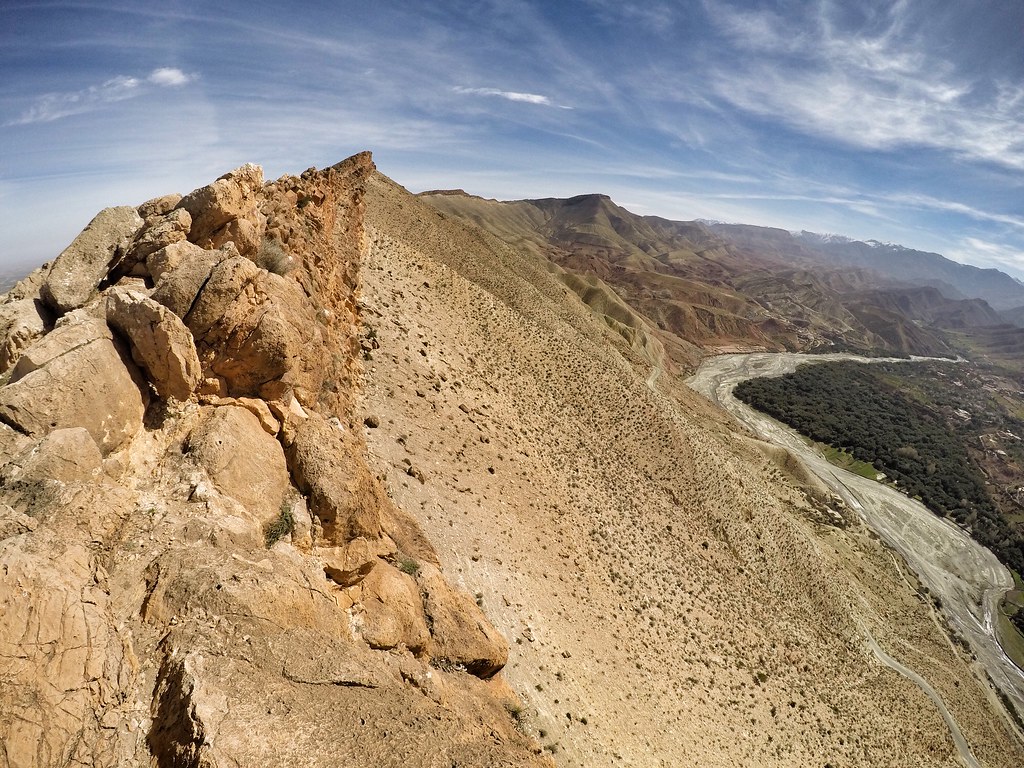 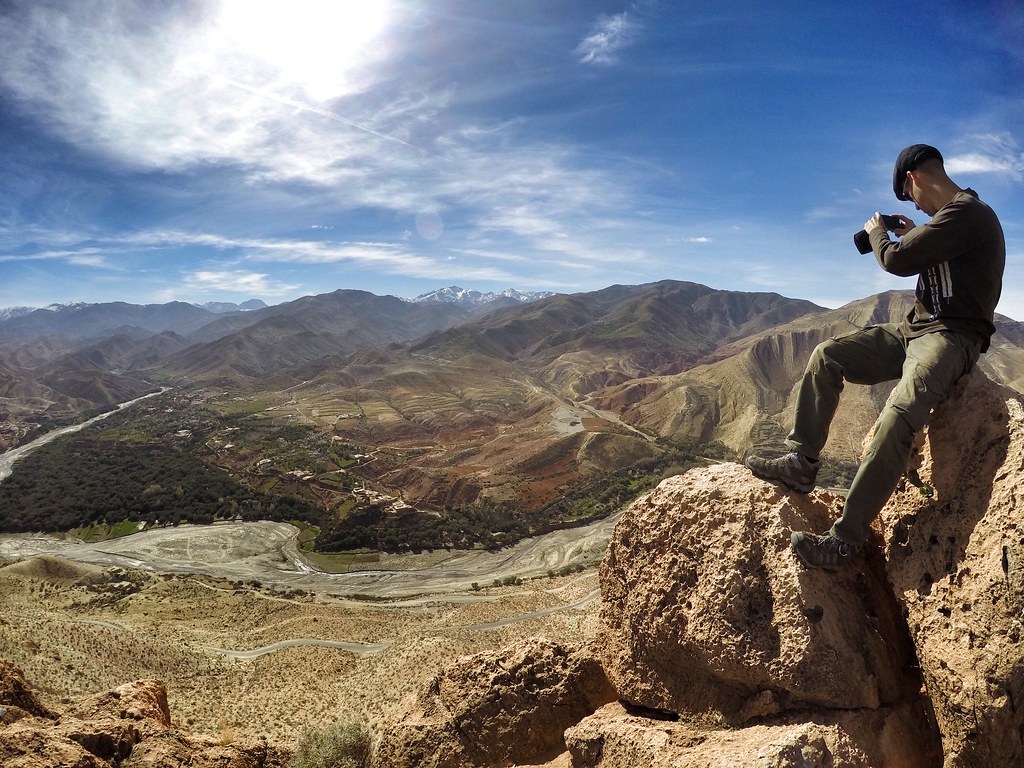 One evening at the centre we had a tea making competition where the loser had to sing. I didn’t care where I came in the competition as long as I wasn’t last. First Hallid, a young chap fluent in English, gave us a demonstration on how to make proper Berber tea. For those of you who don’t know, you basically add green tea to a pot and cover it with hot water for 30 seconds to wash the tea/open the leaves. Then you pour the water away and add fresh hot water to the leaves along with torn up mint or some absinth. Apparently in winter Moroccan’s drink absinth as its more warming, and in summer they drink mint as its more refreshing. The tea competition basically came down to how much sugar we added, and considering Moroccan’s were the judges then the more sugar the better. Another thing we learnt is that you should never stir your tea with a spoon. Instead you must pour the tea into a glass and back into the pot about 4 times to mix all the ingredients, then you can taste it and see if it needs more sugar – which it will. Then the tea is to be poured from a height to make it nice and bubbly. There were 7 people in the competition and 4 very brutal judges who took the tiniest of sips and told our host a number in Berber. Craig received what he thought was 15 out of 20 but he soon found out it was out of 40!! So we thought he’d done terribly and lost but the scores only got worse as they went around the room until they reached me and somehow I managed to scrape first place by 1 mere point. I was even given a tea pot and certificate to validate my win. It was a pretty funny night but I don’t get why they gave us such low scores? It was as if a westerner couldn’t possibly make proper Berber tea. I thanked the judges and one actually gave me a big thumbs up and said “proper Berber tea” he didn’t speak much English but if he had I’d of asked why he only gave me 6 out of 10 for my ‘proper Berber tea’. 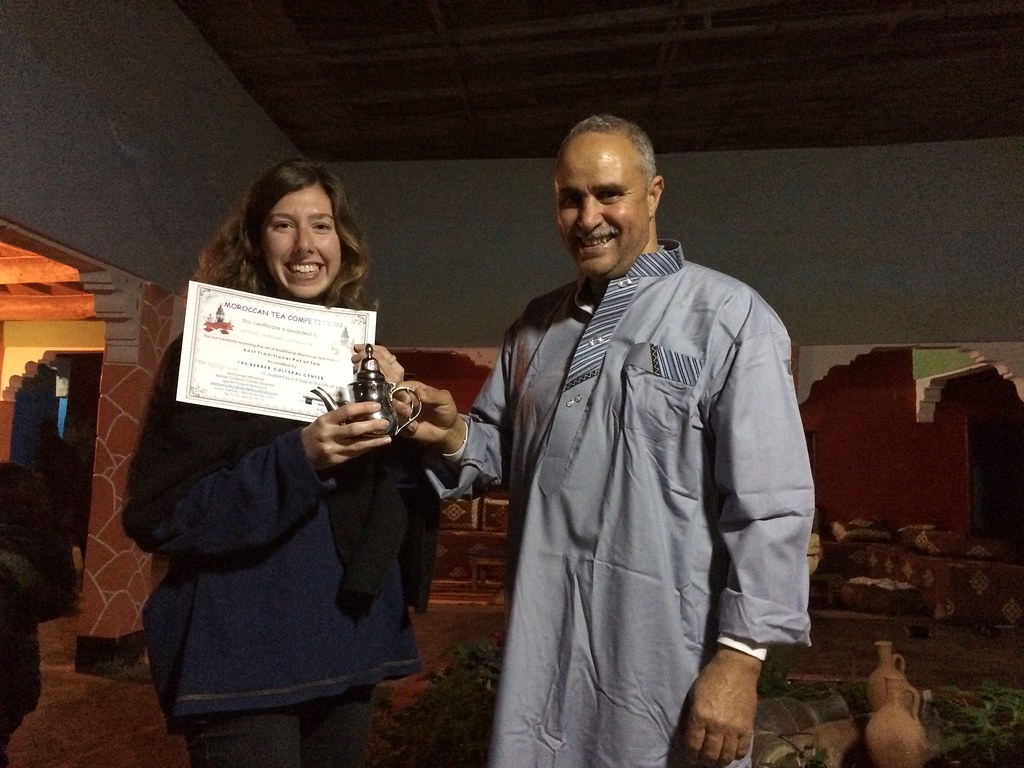 The next day we had cooking class where Craig learnt to make a tagine which was so tasty and I made bread with Fatima who’s a pro bread maker. We have fresh bread every day at the Berber centre and Fatima showed us a very simple recipe to make the typical circle bread which is moroccos staple. She made it look so easy but it was really tricky to flatten the bread down as it kept pinging back into a dough ball. Fatima made 20 perfect dough circles in the same time that it took us to fondle and almost destroy a single ball by frantically trying to squish it down. She fixed ours and then it was time to cook them in the outdoor oven, along with little Lina’s bread which she made into smiley faces. It was a really tasty lunch with the freshest of ingredients and warm, doughy bread. 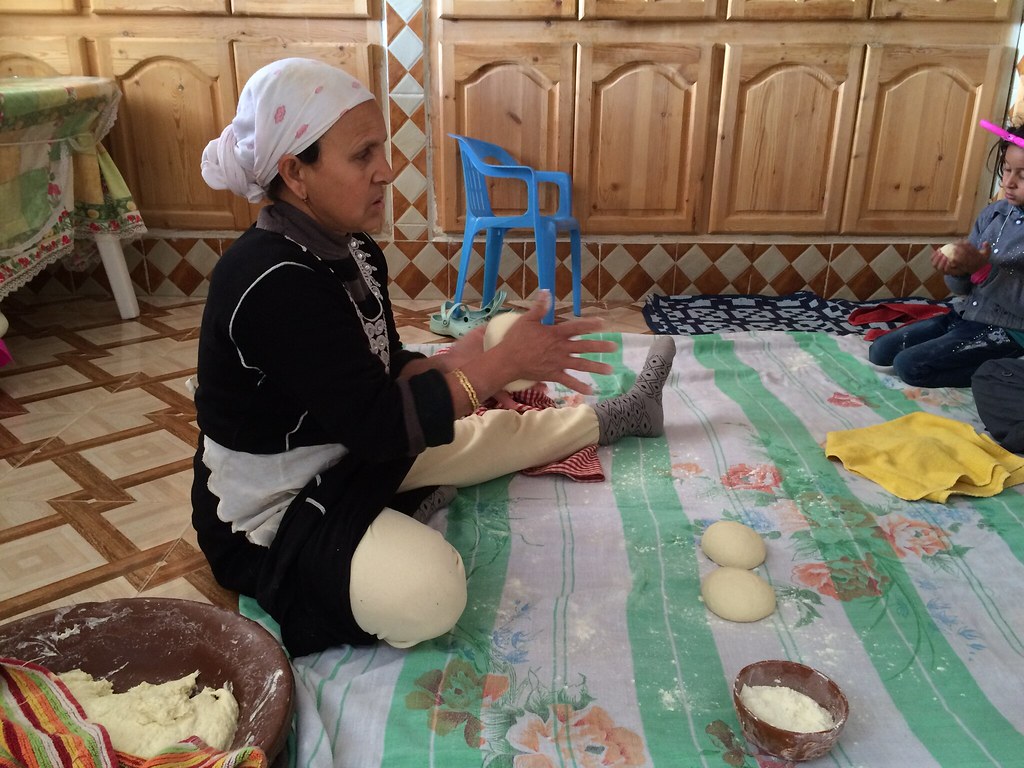 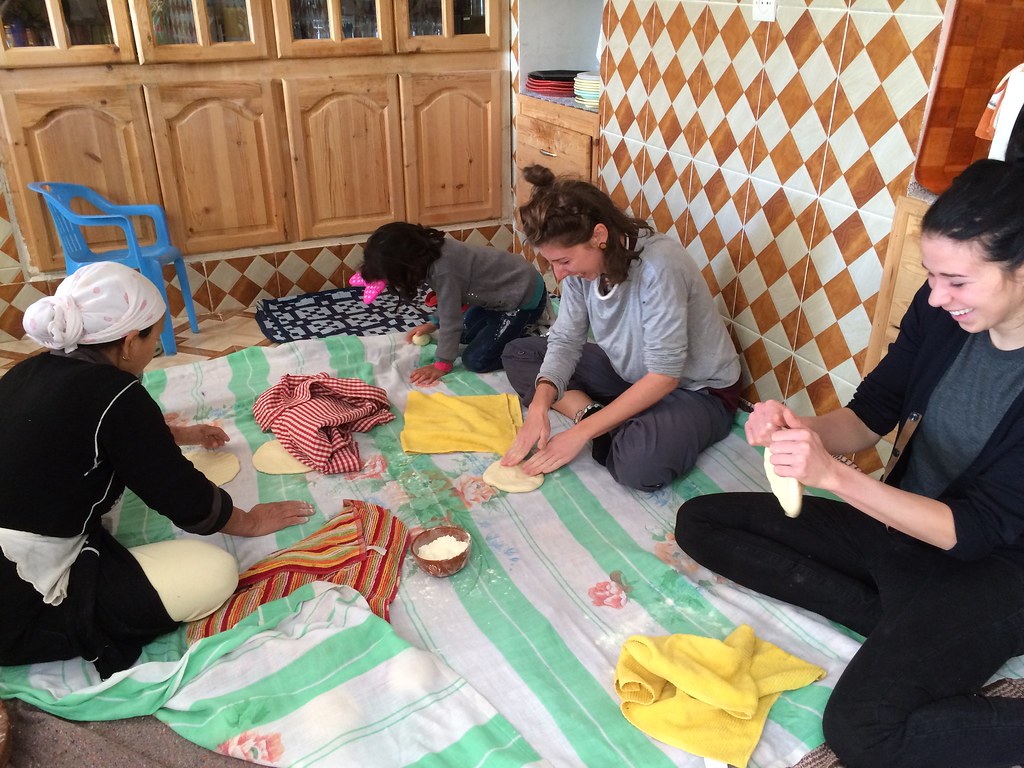 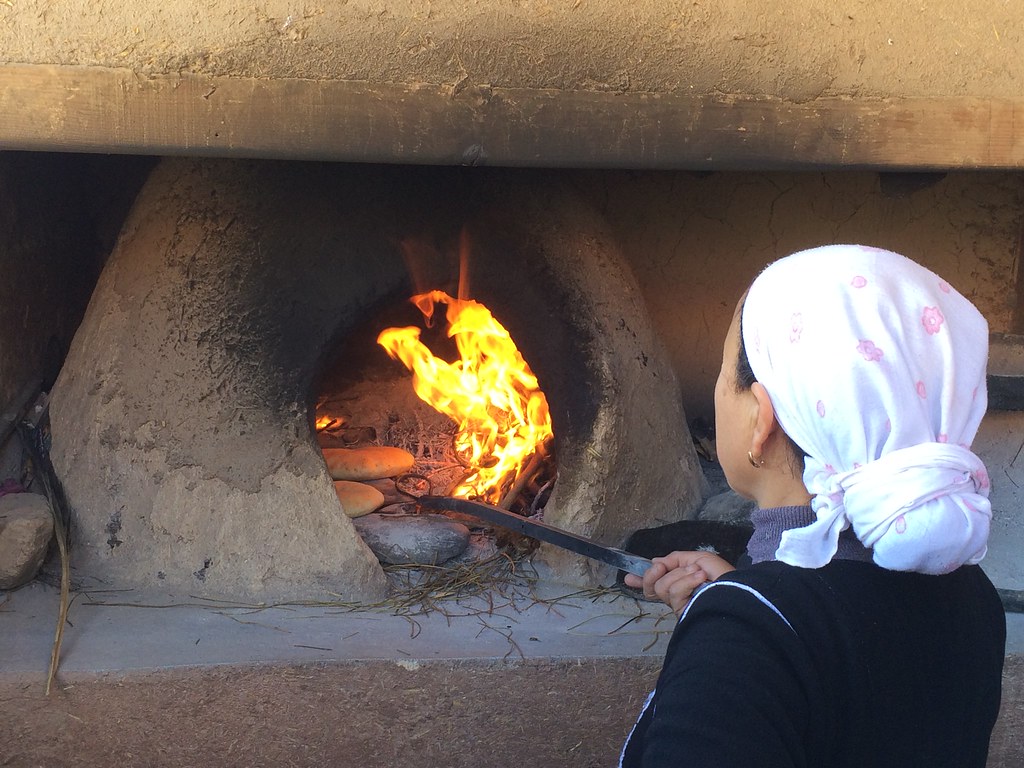 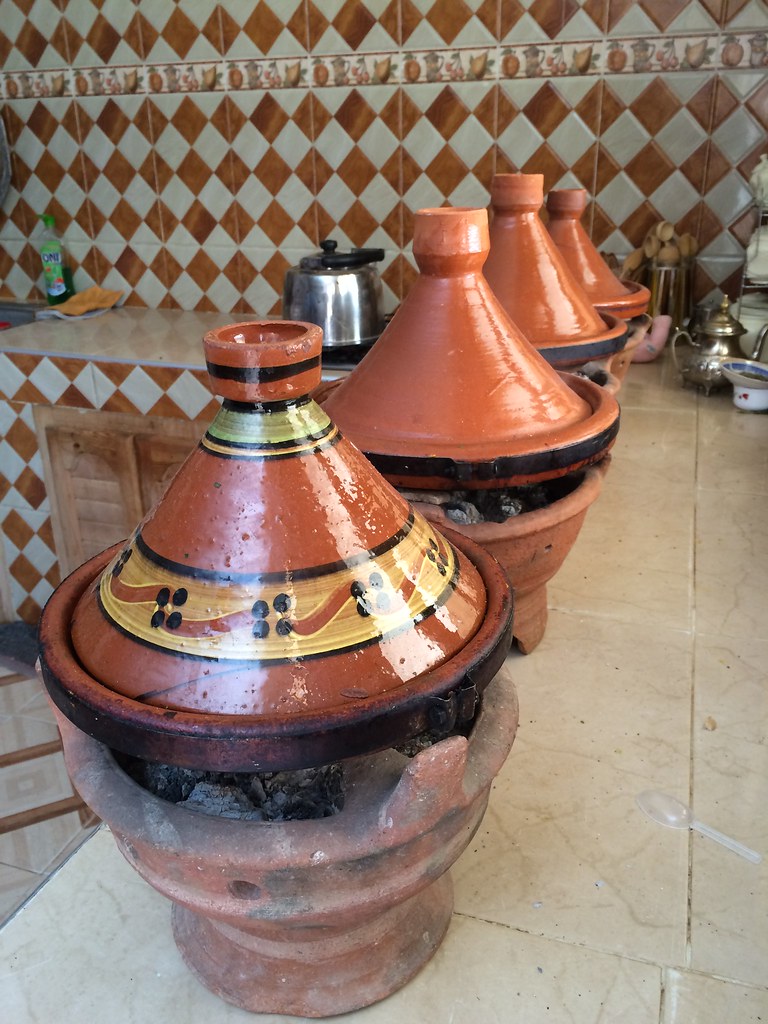 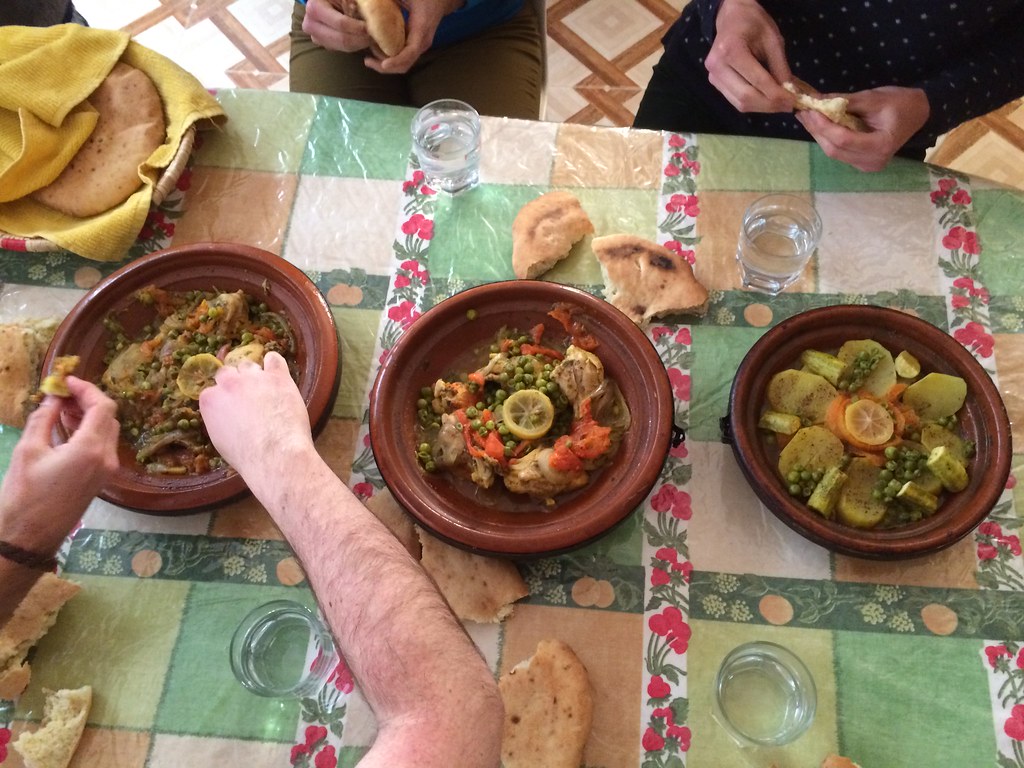 Lina wanted to show us the family turkeys so we went on a walk with her through the village. After the uneventful turkeys we saw a much more exciting sight – two adorable donkeys! They were so cute and seemed happy to be stroked. The 6 year old finished our village tour off with a bizarre walk alongside the back of the centre where there was a mountain of a thousand nappies. Clearly she didn’t understand that rubbish was a bad thing yet. We figured the walk was leading somewhere but then she stopped and led us back the same way – as if it was a worthwhile place to visit. 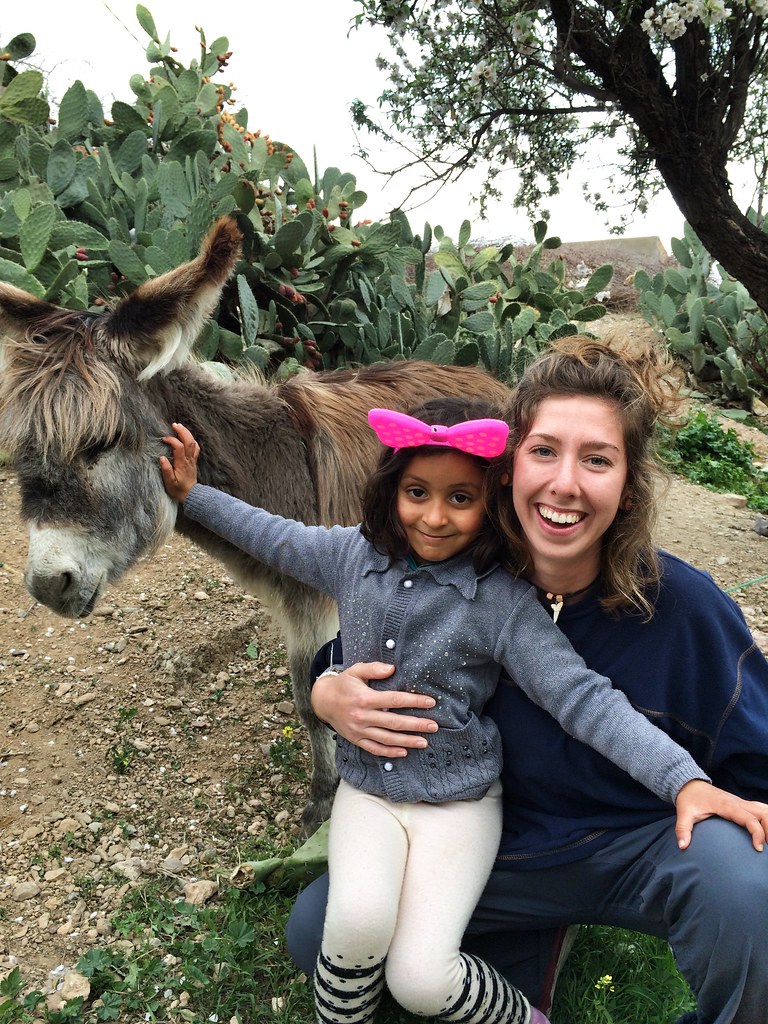