The typical Moroccan blue skies were quickly swapped with menacing black clouds as we set off on a 4-5 hour hike through the foothills of the Atlas Mountains. Hallid led us along dusty tracks for superb views of the beige mountains stained with red patterns. We followed the river valley, passing little mud-brick villages and groves of almond trees covered in white and pink blossoms. Much to our excitement a few of the villages had adorable puppies which we were more than happy to stop and cuddle. 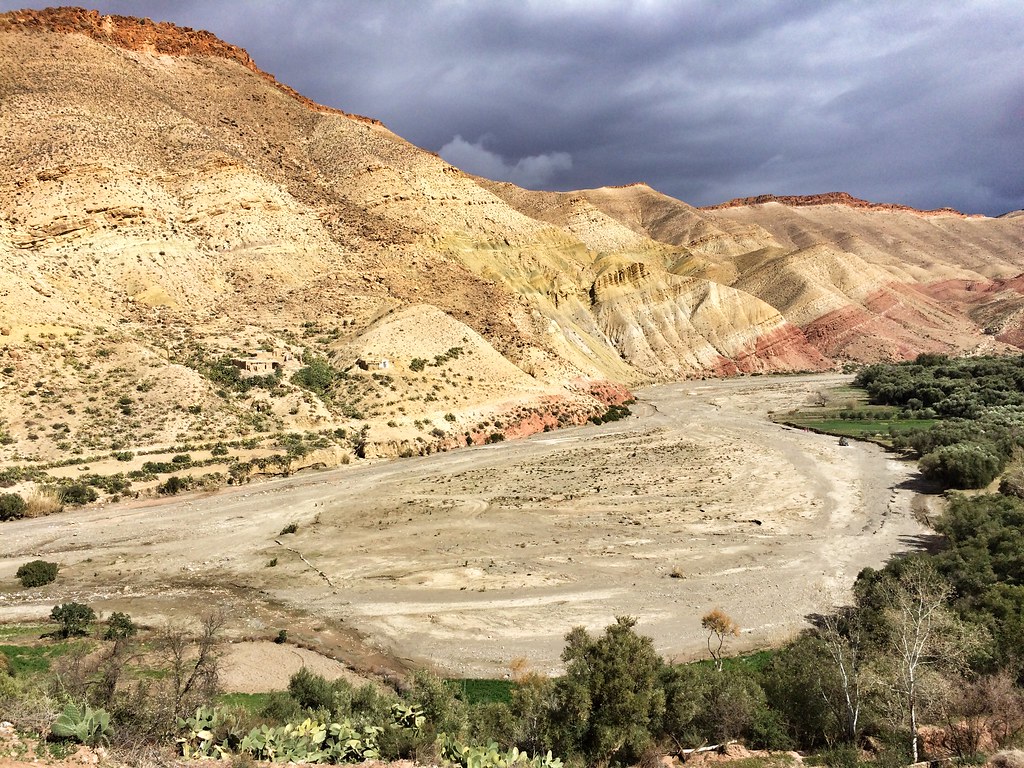 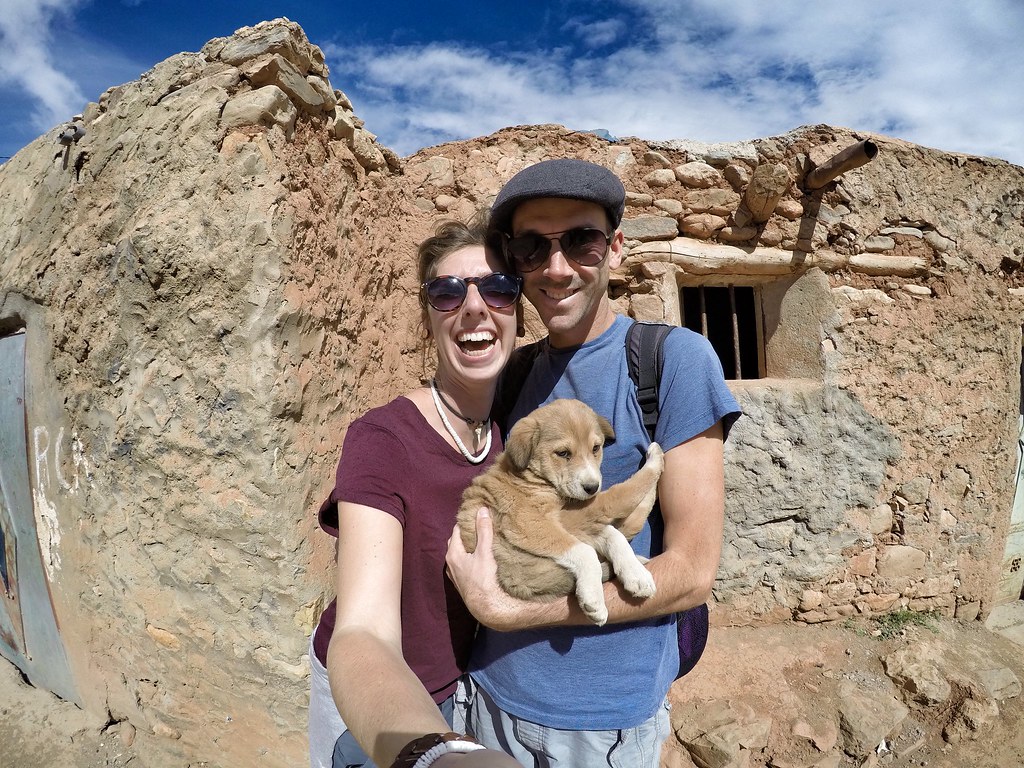 As we passed through one village Craig spotted a sheep ‘swimming’ down an irrigation area. The poor thing had come down the steep banks for a drink and fallen into the cold water, unable to climb back out. Hallid, being the only local and the only shepherd in the group spread his legs across the concrete walls until the sheep washed down to him and he could pull it out. Everyone helped to pull the ridiculously heavy sheep up the dusty bank and into the sunshine so it could warm up. As you probably know sheep tend to follow one another and we spotted two more helpless sheep being swept down towards us. The next two were much heavier and ever so weak once they were out the water, shaking from the cold and the shock. 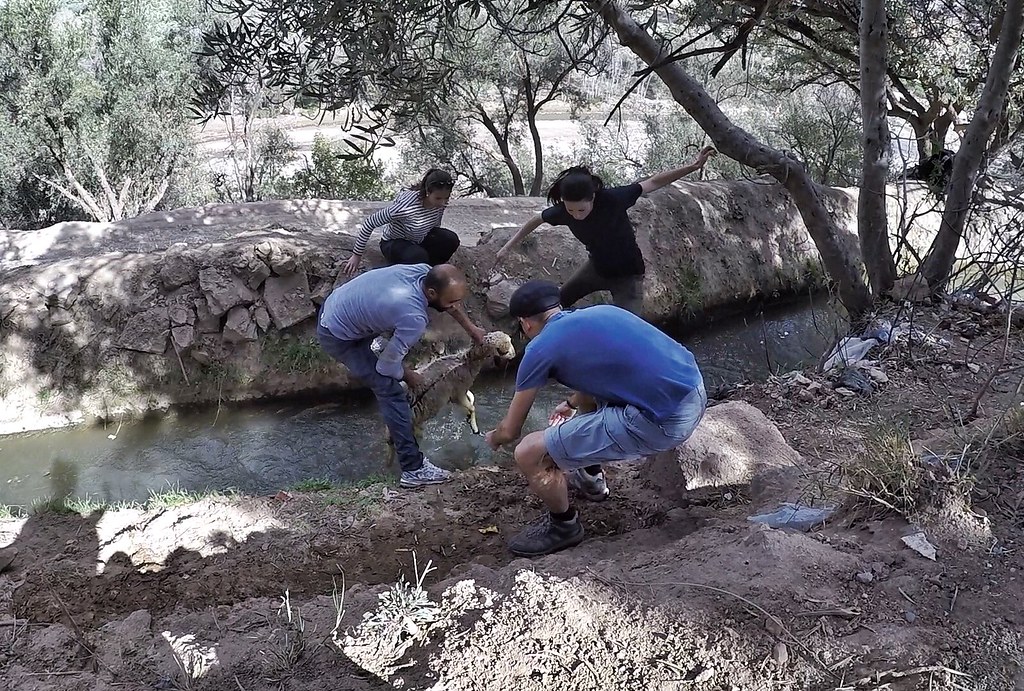 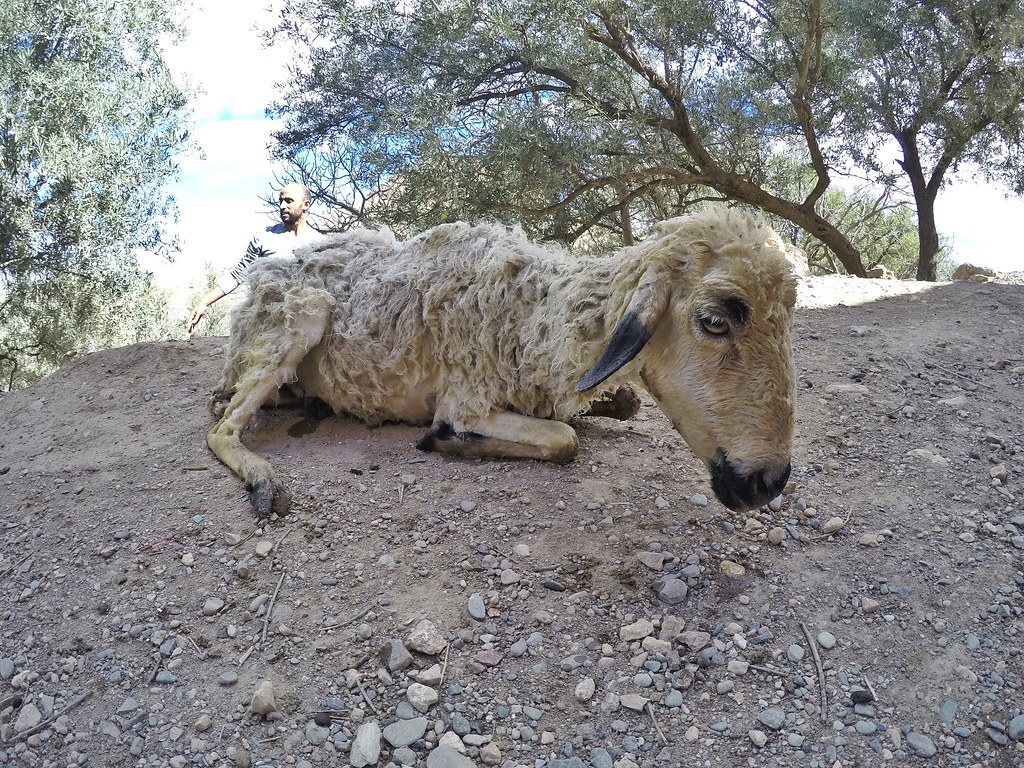 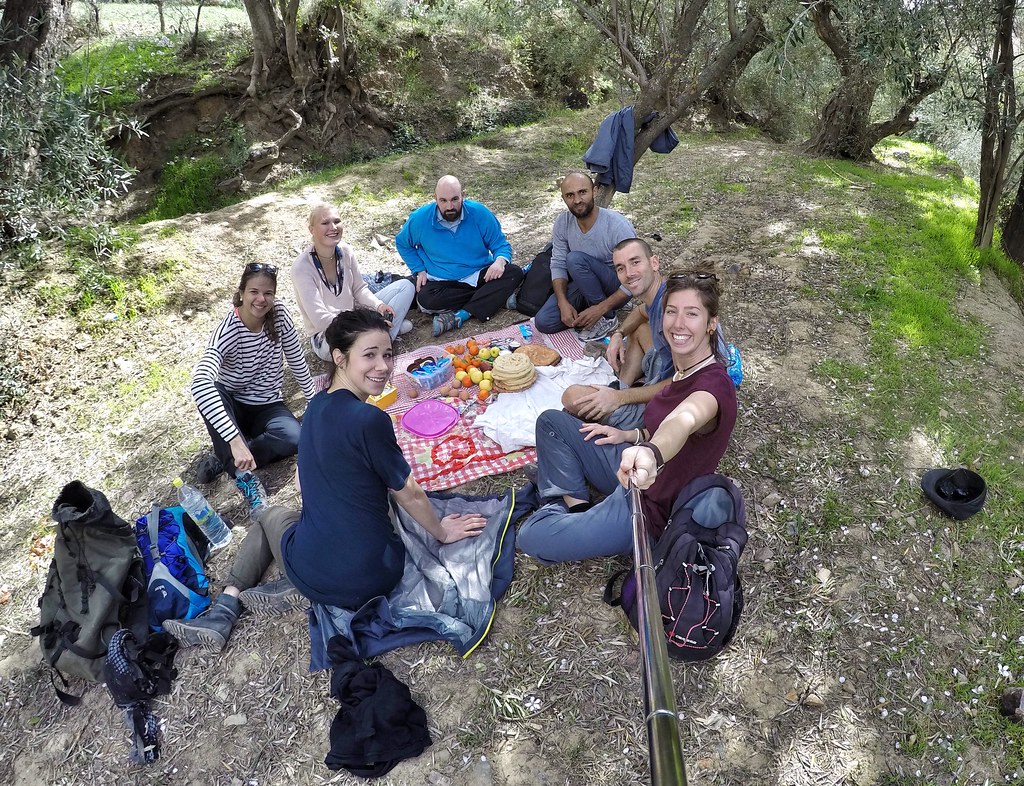 We stopped for a nice picnic in a grassy area covered with trees. Nearby were a group of kids playing on a homemade see-saw which consisted of a long tree-trunk balancing on a low lying branch. We crossed a couple of big river beds with just a trickle of water and headed back a different route. A few drops of rain fell on us but for the most part we were walking under a spotlight of sunshine while the sky darkened around us and a rainbow formed. The scenery became very colourful with beige and terracotta coloured hills and occasionally a local would come past on a donkey. 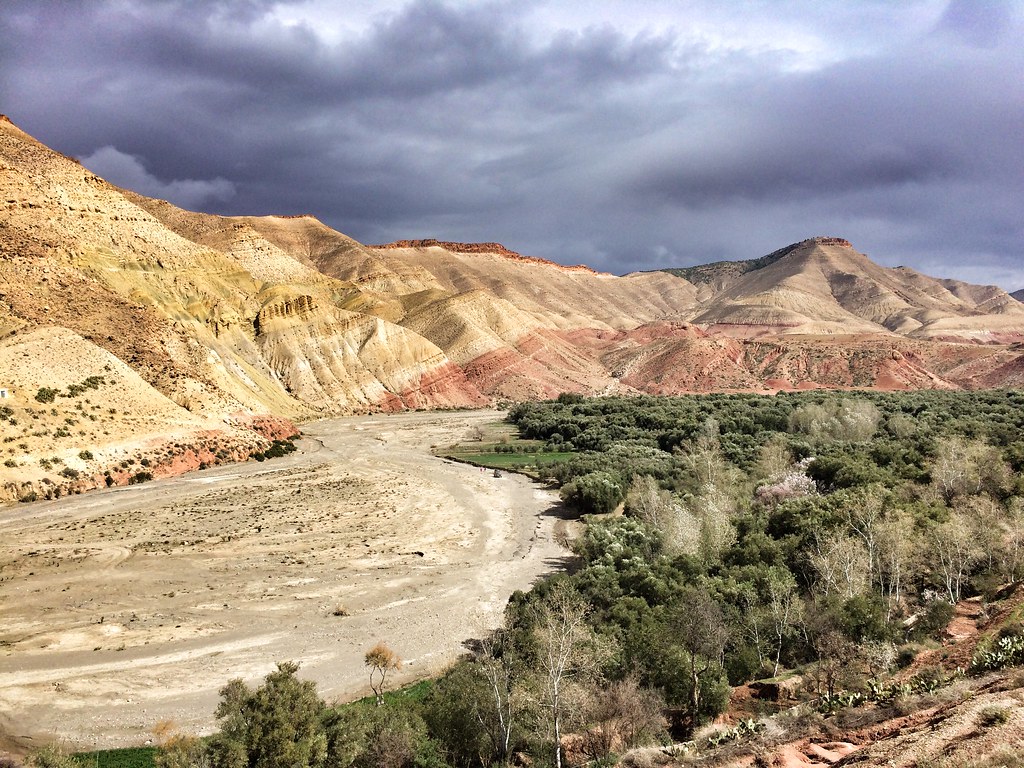 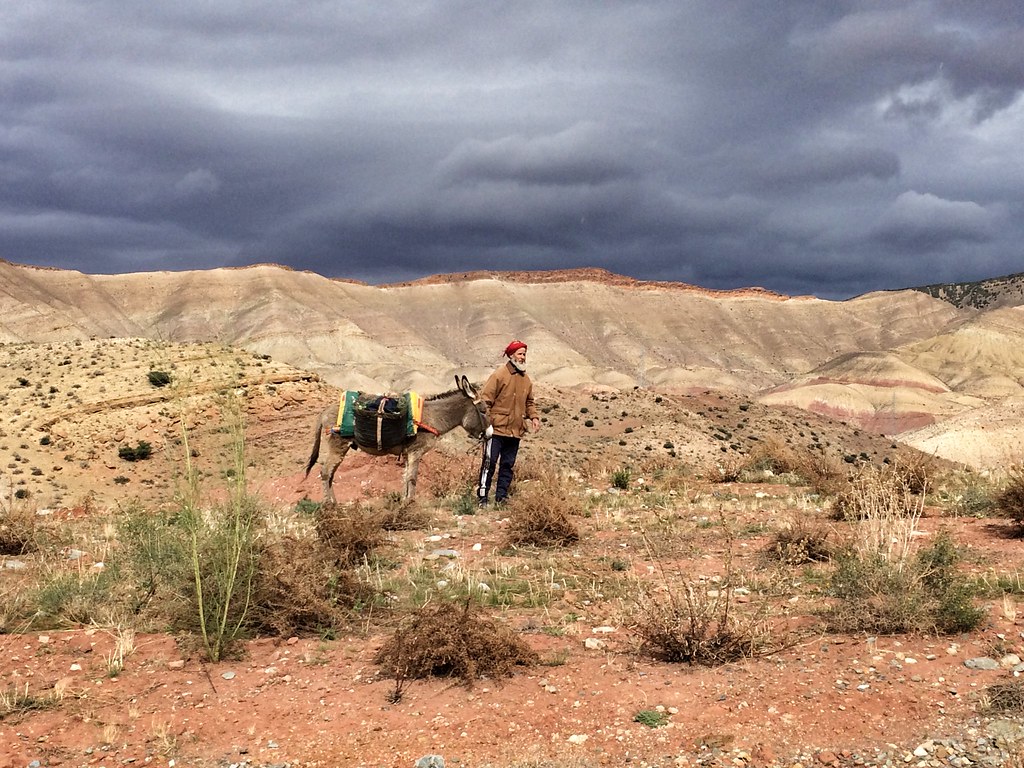 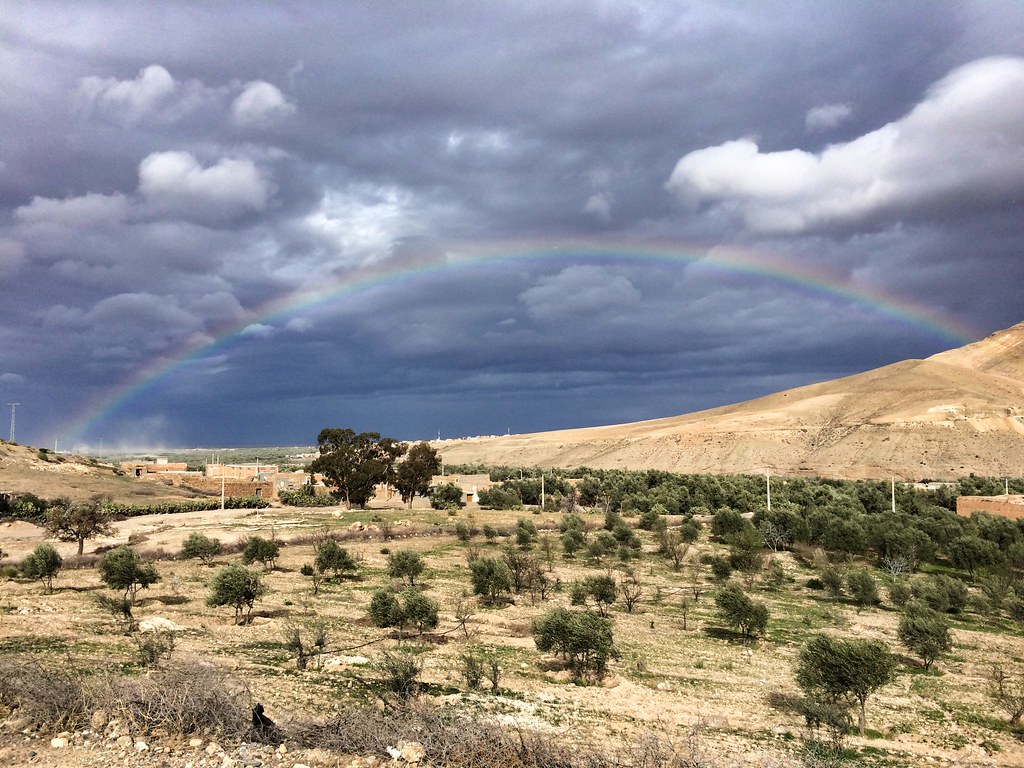 That night the weather really turned and we had wild winds. The Berber centre was built around a central courtyard with a corrugated plastic roof which was shaking like mad in the wind. Locals had to cover the roof with logs and rocks to keep it down. Everyone except for us was leaving today and Ben, the French guy we’d spent a lot of time with announced that he was going to have his last shower in Morocco so he turned the heater on and waited 30 minutes, at which point he re-announced “time for my last shower in Morocco” before wandering off to get his towel. It was at this point that we realised there had been a power cut and Mohammed the owner began giggling. We didn’t quite understand what he was laughing at, and then he quoted Ben “last shower in Morocco…” and burst out laughing. The bathroom had no windows so we began laughing because it would be difficult to wash in the dark, but we said at least the shower had time to heat up and Mohammed was now in absolute hysterics and tried to get some words out between the laughter “the power went out 30 minutes ago….no one notices…shower not hot” and then we understood and couldn’t help but join in with the laughter. Ben came out wandering what we were laughing so much about and all we could say back was “last shower in Morocco” before rolling around laughing again.

On our last day at the Berber centre we were taken to a local market by Brahim. He was a very hard worker and just scurried around keeping busy the whole time, so it was really nice to see him out of the centre and saying hello to practically everyone. Brahim took us to a tent where we had to take our shoes off to enter and walk on the filthy mat where half the people walked on with shoes. Made no sense to me. Anyway, it seemed to be a place where you rented cooking equipment if you were far from home. So Brahim got a clay pot filled with coals, chopped up some onions and tomatoes and began cooking them in a pan atop the coals. Cumin was added to the pan along with lots of flavourful olive oil made in our village and it was finished with four cracked eggs and a sprinkle of salt. He also ‘rented’ a tea pot and glasses so he could make us some absinth tea. We all dug in with fresh bread made by Fatima and enjoyed our first ever breakfast cooked in a Berber market – along with the view of a local mans bare feet infront of us. To be fair he was wearing socks but there were so many gigantic holes that it was like a sock-thong. We wandered around the market before we left and saw cattle being sold and put into mini vans. We really enjoyed our 5 days at the Berber centre and constantly had full bellies. Now it’s time to head to the Sahara and volunteer in a desert camp. 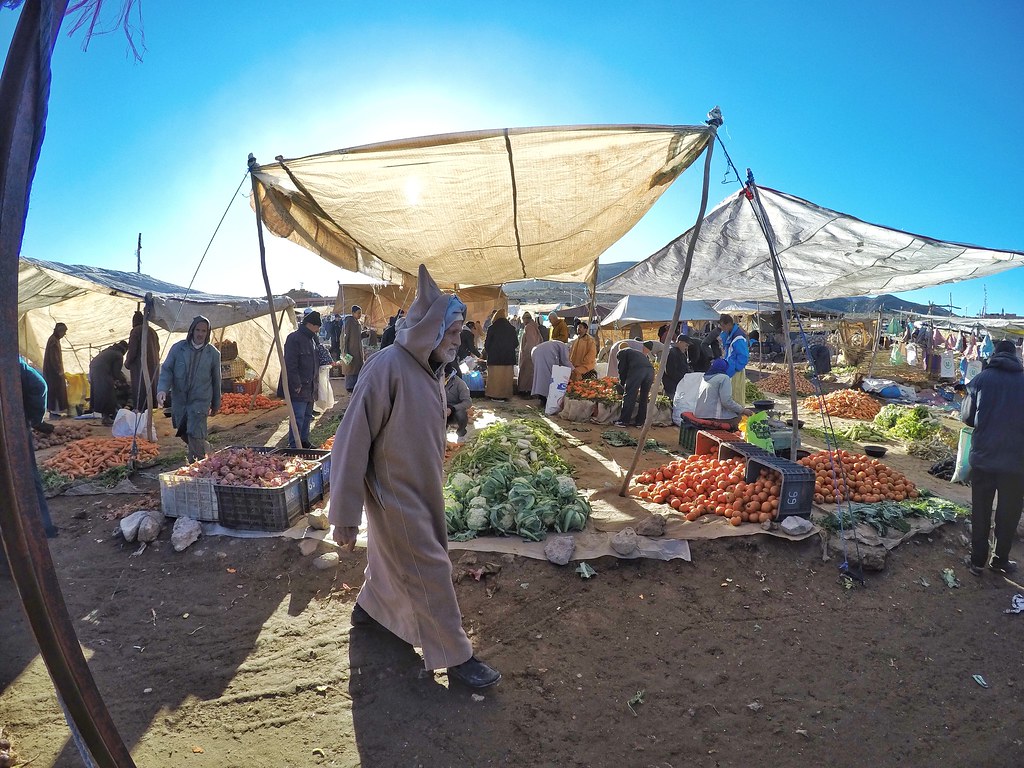 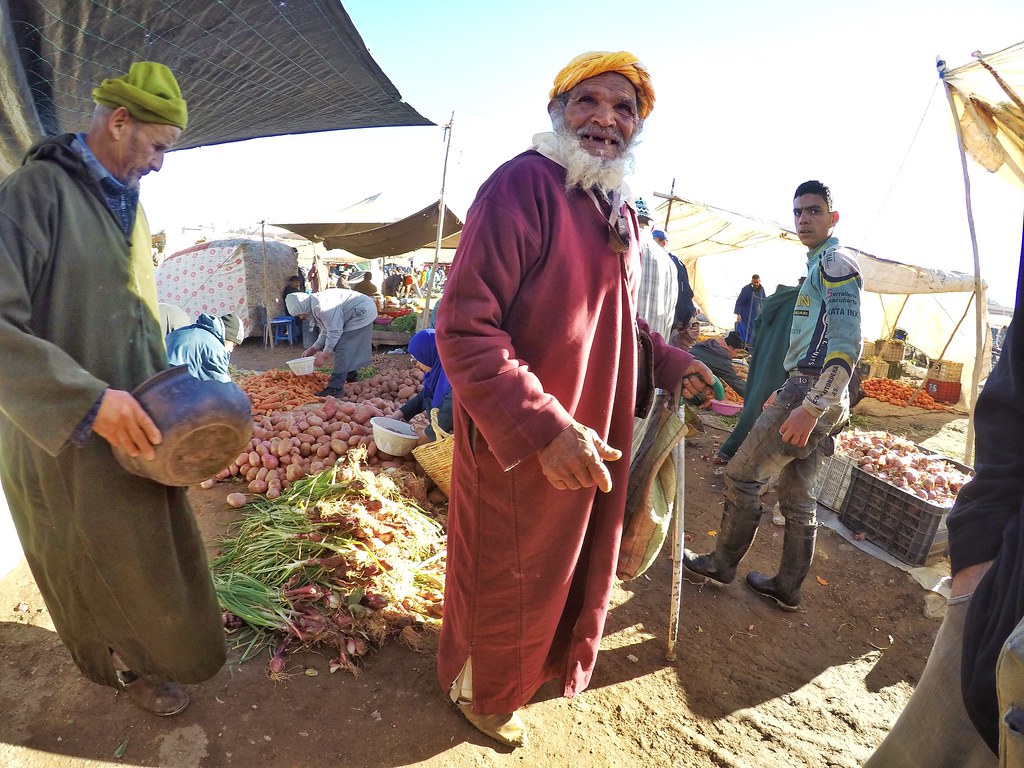 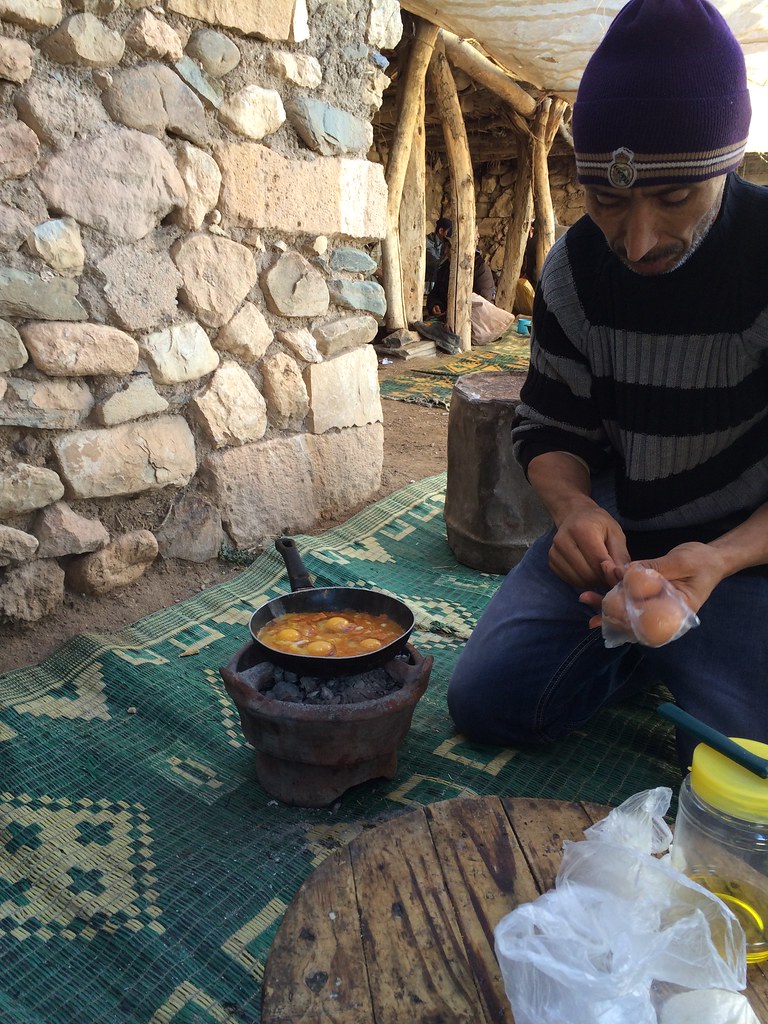