When I was a kid I grew up with nannies, most of them were European, but our favourite one was a Moroccan lady called Nadia who had black hair as long as Rapunzel Nadia really became part of our family but we soon grew up and she moved on to start her own family. We stayed in contact and when my sister and I were about 10 and 12 we were put on a plane, on our own, to Casablanca to visit Nadia and her family. The house was amazing, one of the most modern ones in Casablanca, with more of a European design than Moroccan and it had been featured in architecture and design magazines. One day they piled about 8 of us into a small car and took us to a beach where we swam in some of the roughest sea we’ve ever experienced. We had a blast getting rolled around like we were in a salty washing machine, until we got out the water and realised our bikini bottoms had filled up with sand and we looked like cross-gender children.

So now it’s about 18 years since I was last in Casablanca and this time I was taking Craig to visit Nadia’s parents, Saida and Abbès. They kindly picked us up from the bus station, and we chatted to Najeed, who’s one of Nadia’s brothers and speaks fluent English. It only became apparent on the drive that Nadia’s parents didn’t actually speak English and we didn’t speak French or Arabic. It was going to be an interesting couple of days.

The house was just as I remembered it, with a fabulous almost floating set of stairs and four lounges (with 14 rugs just on the left side of the house!). We were treated to a delicious lunch and the table was filled with salad items, including a massive bowl of avocado which I dived into. Once Najeed left, the language challenges began and it was like a constant game of charades. It was pretty funny though. We had an app which we could speak into and it translated the sentence into French or English which really helped. It wasn’t without its faults though and just simple things like “hello my name is Craig” ended up saying “hi I’m cried” and when we said “thankyou for the delicious food, we are very full” it changed the end to “we are fools” and I had to quickly cover the speaker so they couldn’t hear my blunder.

We’d eaten a late lunch at about 3pm and around 7pm Saida, Nadia’s Mum, asked if we wanted coffee. They don’t do anything in halves in Morocco and she didn’t just boil a kettle and hand us a cup of coffee, she heated milk so we could make really tasty coffee and hot chocolate. Then we were given cupcakes, wafers and a bowl of unknown sweetness. It was like sugar, cinnamon and grains and totally scrumptious. Abbès kept pointing to it and then doing a Popeye-style muscle impression suggesting it would make us strong. He did this impression a lot and it always made us laugh. We were stuffed after all the treats and figured that because we’d had a late lunch that that was it for the day, we were stuffed. Not long after though Saida called me into the kitchen and asked if I wanted soup and pizza. I patted my belly and blew out my cheeks to say I was full. And then I did some hand motions to suggest having them tomorrow. She understood, or so I thought she did. In fact my hand impressions turned out to mean we wanted the food later tonight. My goodness, how do Moroccans eat so much and stay so small? At 11pm we were presented with a pizza each, and of course we devoured them after their encouragement to eat “ish ish!”. We were exhausted after nursing our food babies all day so we headed to bed and as I said goodbye we were given a yogurt each. We were really giggling while stuffing the sweet yogurt down our gullets. I got upstairs and showed Craig my belly – we both looked pretty worried as it was so big that it was hard to believe their wasn’t a 7 month child in there.

The next day they very kindly took us out to see Casablanca. We were treated like royalty, being whisked around in a fancy Range Rover. The first stop was a visit to the Hassan II Mosque which was way more impressive than we expected. It was a humongous building, and its the third largest mosque in the world with the tallest minaret in the world. It’s hard to be impressed after travelling for so long but this mosque really wowed us. There were beautiful mosaics, star shaped fountains and doors big enough for dinosaurs to walk through. 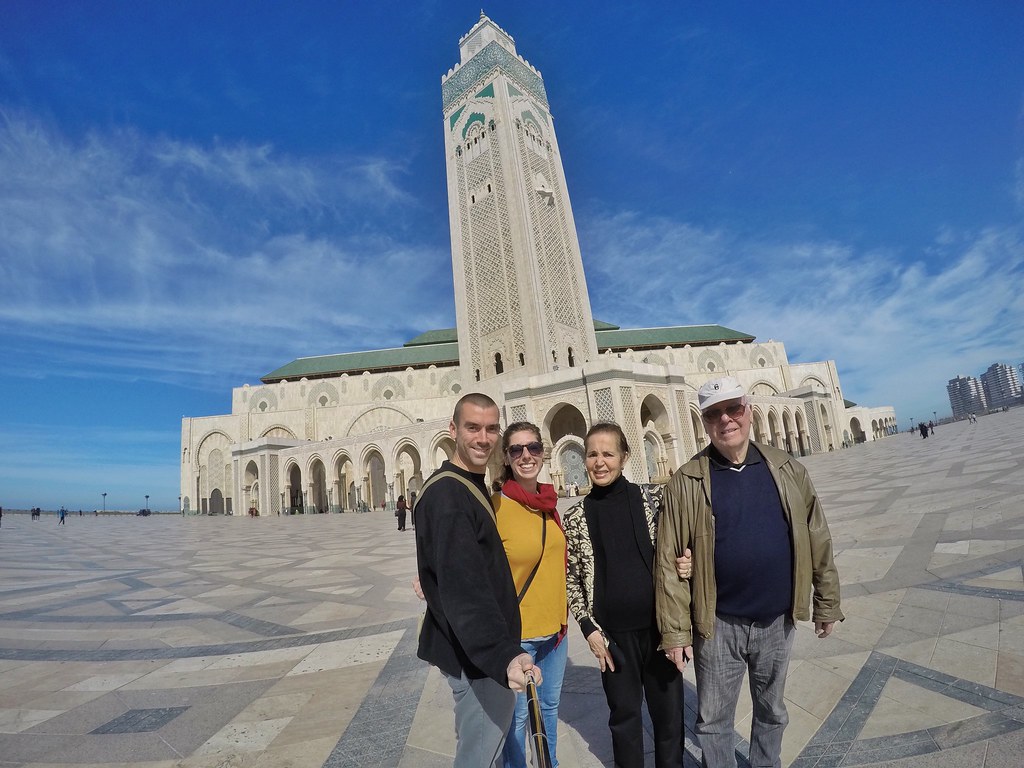 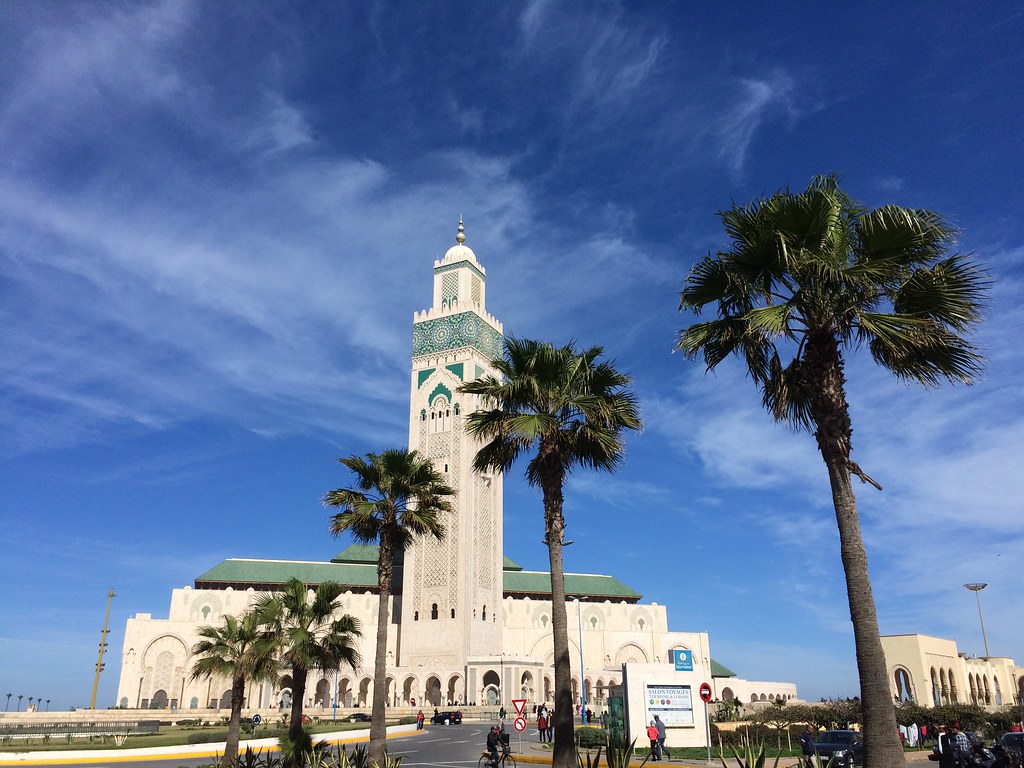 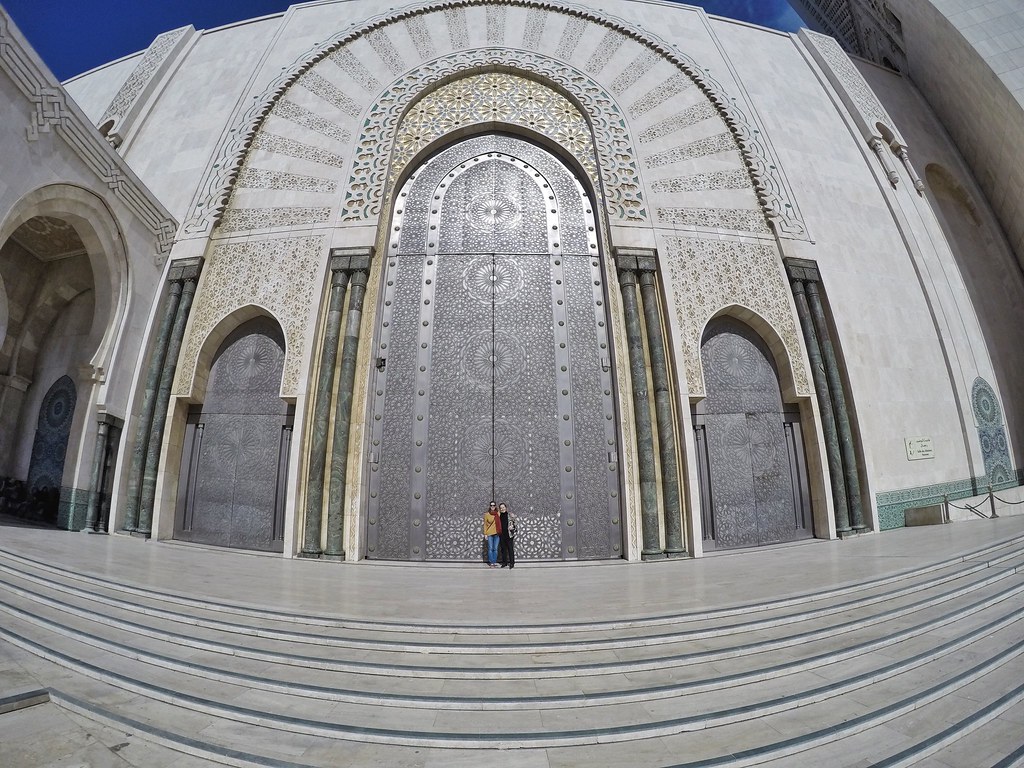 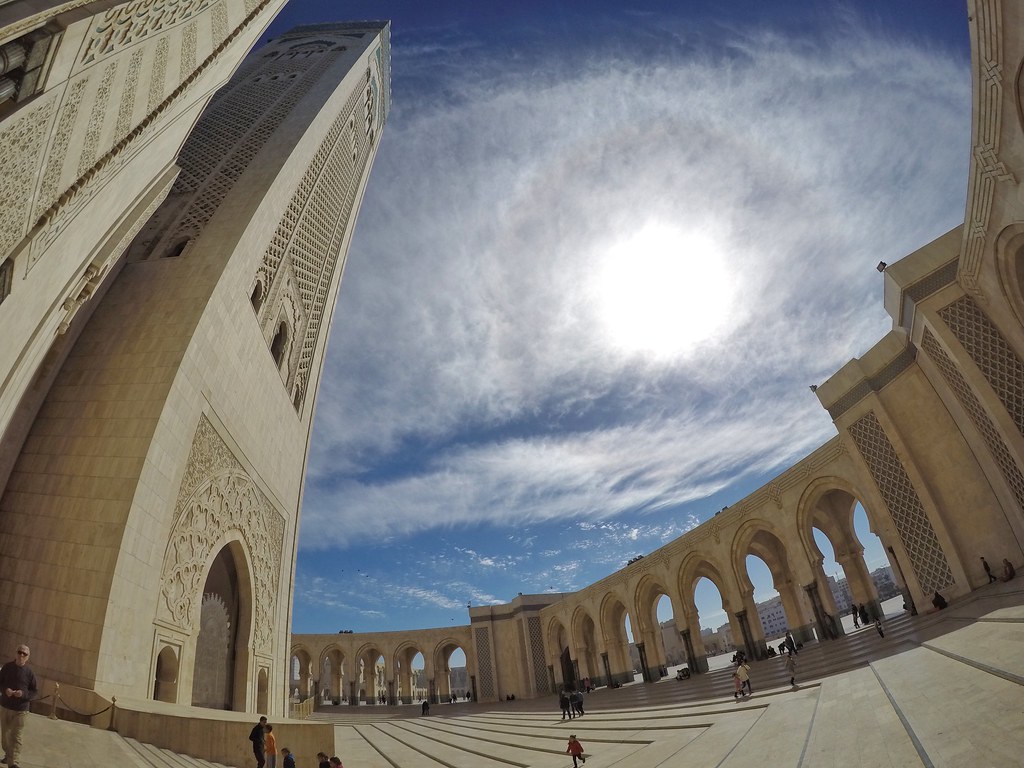 We were treated to a tasty lunch and then a lovely stroll along a posh promenade area where we had ice cream. In the late afternoon they showed us around a market where we ended up in a courtyard filled with olive sellers. Abbès didn’t waste a second of olive-tasting and went around half the stalls trying a particular type of black olive that he really liked. Occasionally he’d find a good one and get Saida to try it and her face would screw up. She clearly didn’t like that type of olive and he really wanted to find one she liked so they could eat the same variety. 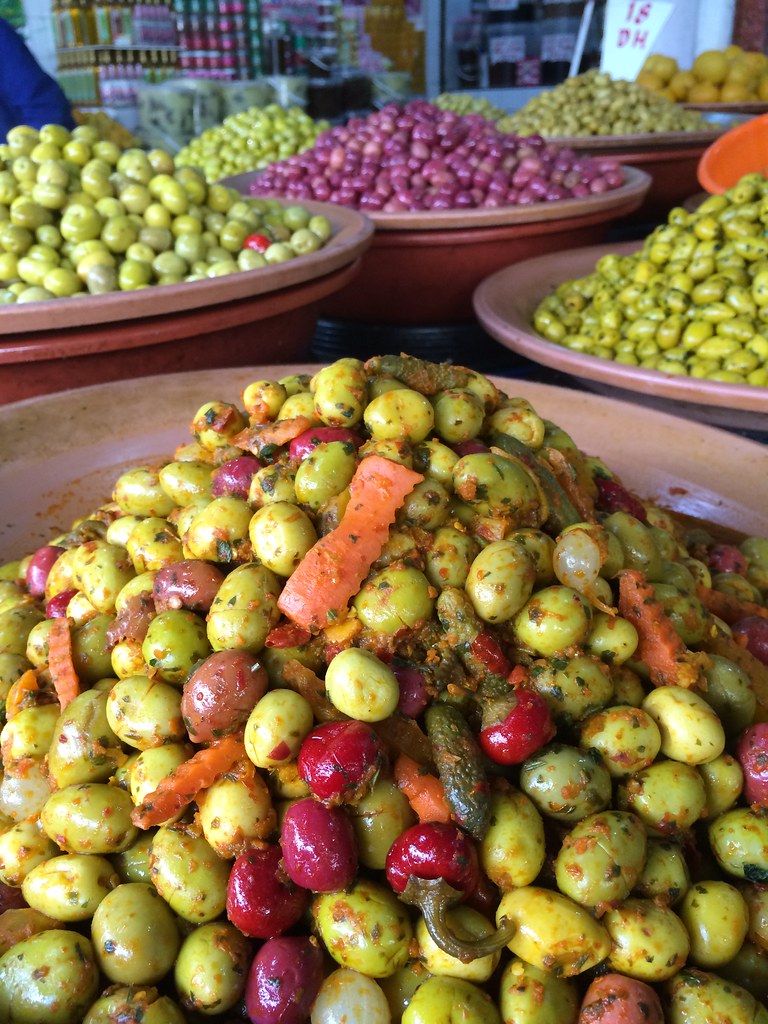 It was sad to say goodbye the next day, they were the sweetest of hosts. It felt like we arrived as friends and left as family. We were also showered with gifts which was very naughty of them, but I left Casablanca looking like a stylish backpacker with a sparkly ring, long dress and scarf, plus a hat for each of us. 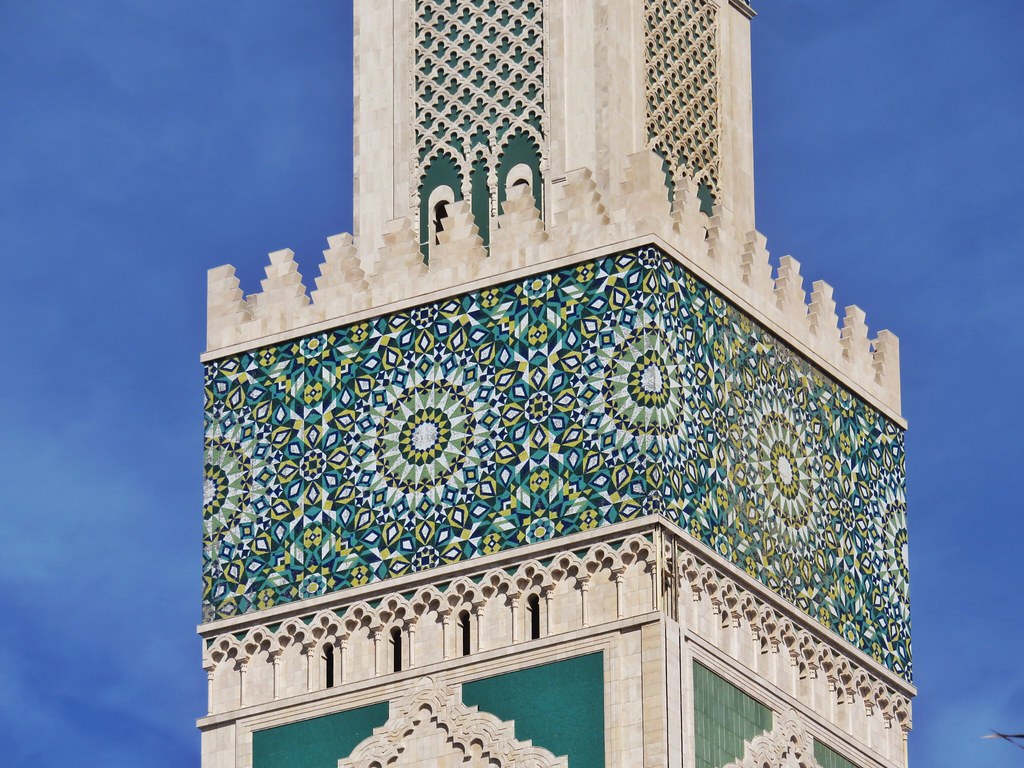 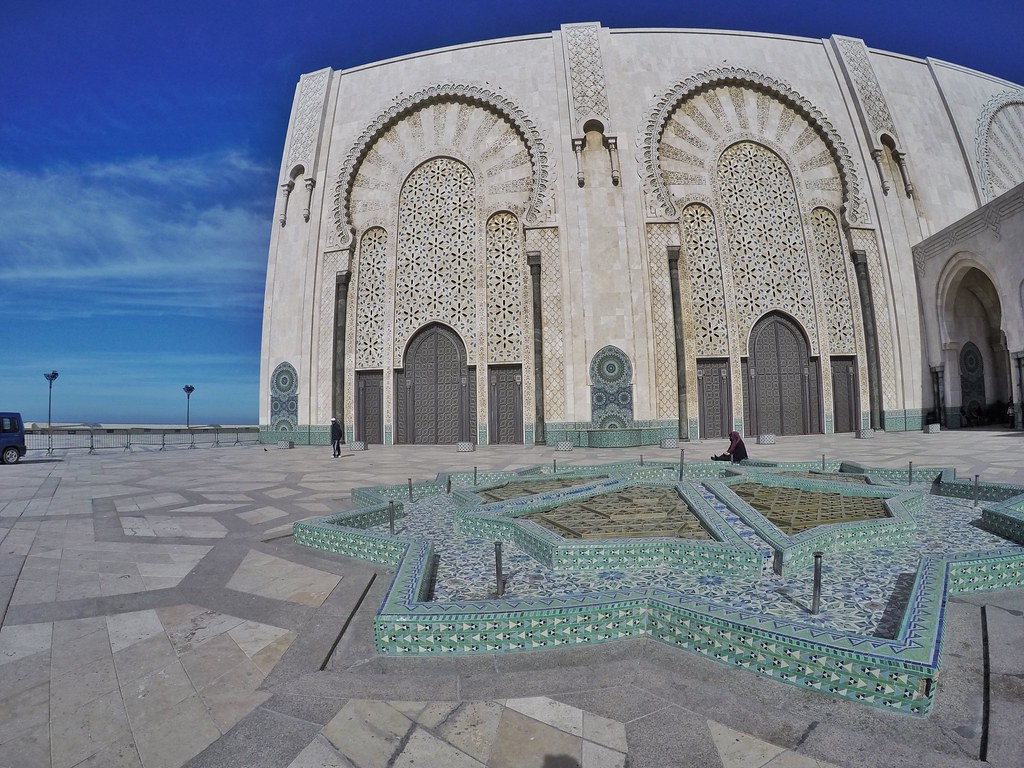