The little Portuguese town of El Jadida was never on our list of places to visit in Morocco but we had a couple days spare before visiting family friends in Casablanca so we picked this town. It was pretty rough on first impressions, the bus station was in a bad state and there were a lot of homeless people around. We were staying in the little UNESCO Portuguese medina though which was like a pocket of calmness compared to the new town. The old town wasn’t well preserved like other UNESCO sites and looked a bit run down in areas, but the crumbling buildings and peeling paint added to its quirks. 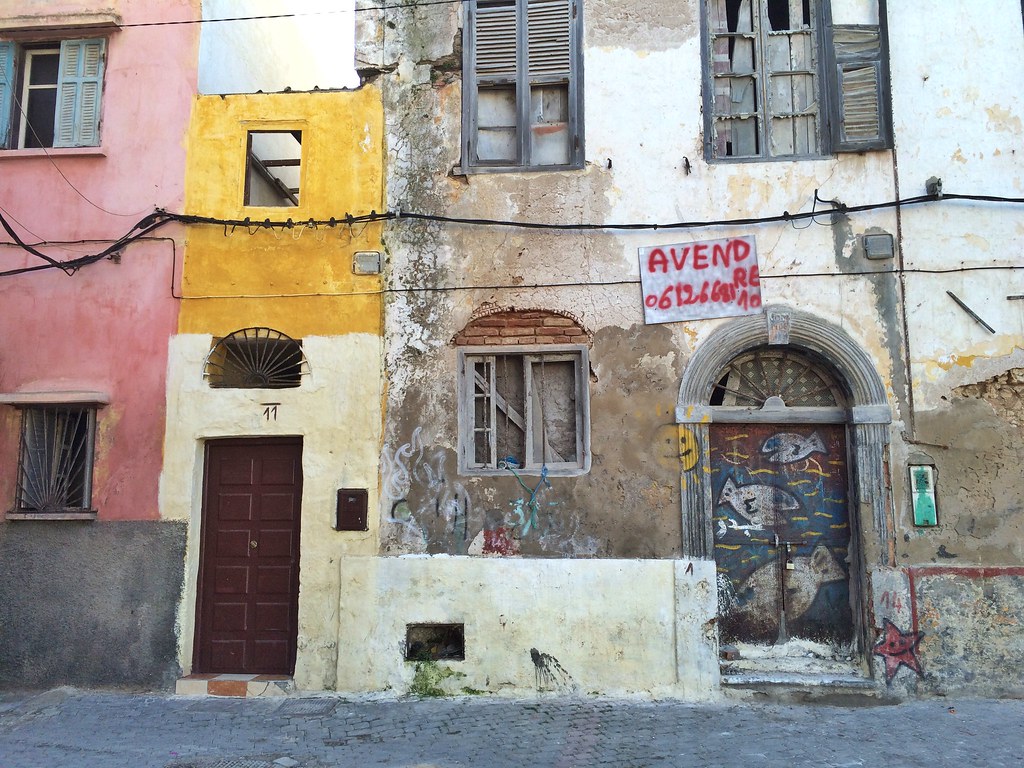 We arrived in time to catch the setting sun from the roof top of our hotel. There was a view of the wavy Atlantic Ocean, palm trees and roof tops. Plus there seemed to be an abnormal amount of pigeons flying through the sky. They were flying cycles around us and seemed to be challenging themselves to get as close as possible without touching us so occasionally we’d get a gust of wind as they swooped past. We headed to the new town for dinner where it was full of people and street sellers. Women sold round bread and thin crumpet style pancakes while men had steaming kofta stalls barbecuing meat. We weren’t finding many vegetarian options for me so we just took a seat in a really busy place and got some soup and bread for just 10p. I wish it was nicer as we’d of grabbed another bowl but I made the rookie mistake of looking at what I was eating and saw some stringy white, meat looking bits which made my face turn white and saliva build up in my mouth. While eating though, all the street sellers suddenly got their wheeley carts and began racing down the pathway. It looked like it was all for fun, women were laughing and tripping over one another until the whole path was cleared. Then five extremely tall policeman marched through as the eatery next to us flung their final table off the path. It was really odd and as soon as the cops had gone out of sight the sellers all took their positions again. 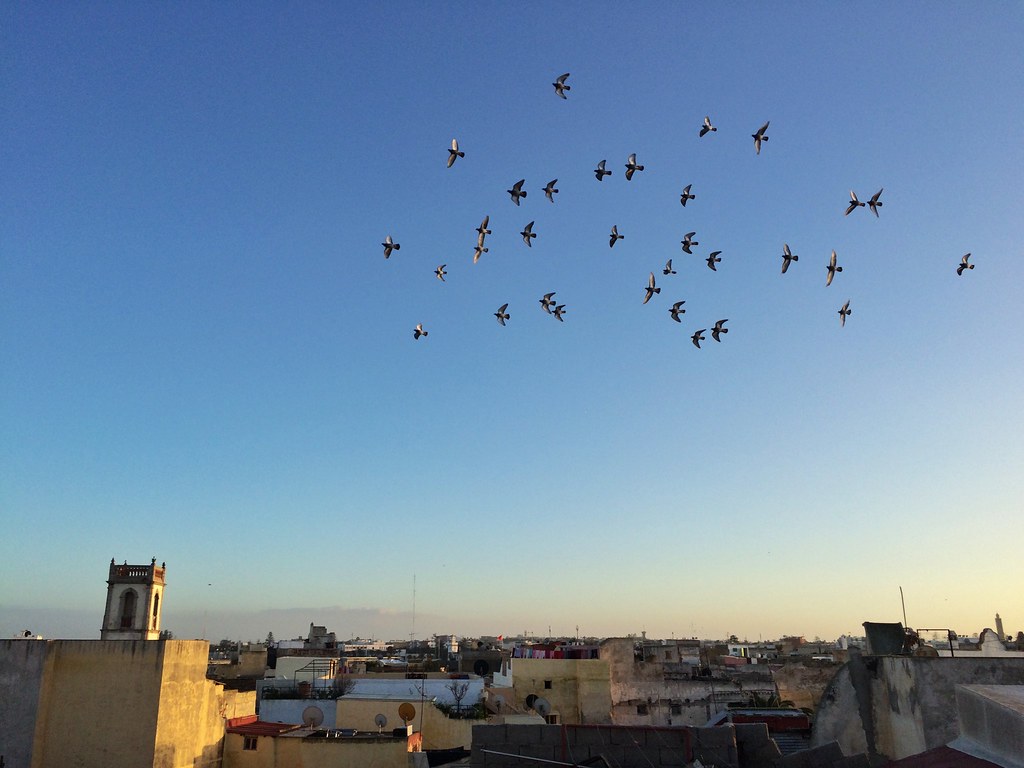 I managed to find a little stall selling the thick, flaky pancakes which I like and got them covered in Nutella. Just next door to the pancake shop were two shops selling live chickens. It was bizarre, the floor of the shop was all hay and chicken shit (and chickens of course) and there was a little fence, like it was a proper chicken run but built in a shop. Three men sat at a table in the middle of the shop eating dinner while chickens flapped around and awaited their ticket to hell. There was a lot of offal for sale and it looked so revolting, like black sponge, but it was stomach lining. Balls were still attached to some slabs of meat, with a maze of veins patterned through the shiny ball. There was even a cows head on a table minus all of its fur.

Craig bought a kofta sandwich for himself which he loved and then he mixed up his Arabic words and ended up with too much food which he donated to one of the many beggars. We saw a lot of people would swoop past cafes to steal leftover meals. But there were also lots of customers who handed them meals and the cafe workers were really not happy about it. There was a big drama one night when an old lady was handed half a meal, the shop owner had a bit of a shout and as she shuffled away another family handed her a full meal, and then she did something we’d read about in our guidebook. It was actually referring to when your travelling, that you should share your food if people around you don’t have any. There’s this bizarre ritual where if someone offers you food you should politely decline, they will offer the food again and again until you accept or you can just take a little bit and pat your belly to suggest you are full. Anyway, the lady was refusing the extra food and kept patting her belly. In the end she took the food and came back five minutes later to return the plates and she broke down in tears at the kindness of a stranger. I actually felt really bad for the workers, they don’t shoo them away to be mean, they do it so their customers can relax and eat without being bothered and I could see the workers were upset seeing her crying so publicly. Another couple let an old man join their table and eat soup. I much prefer acts of kindness like this, as appose to just giving money and not knowing what it’s being spent on. 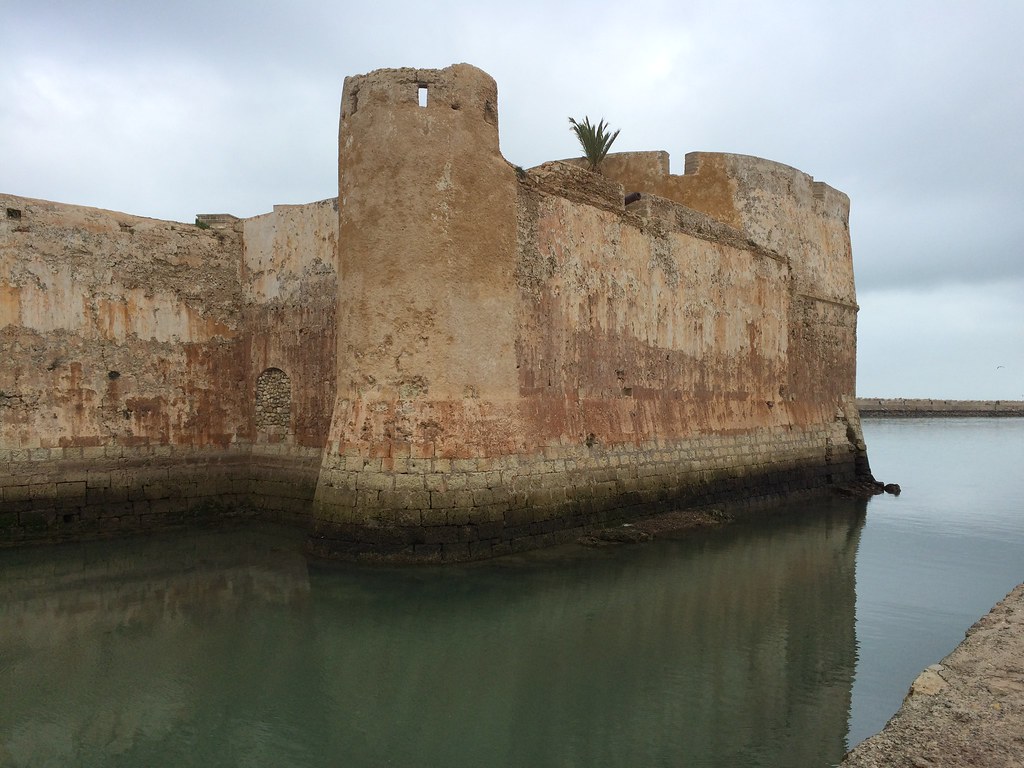 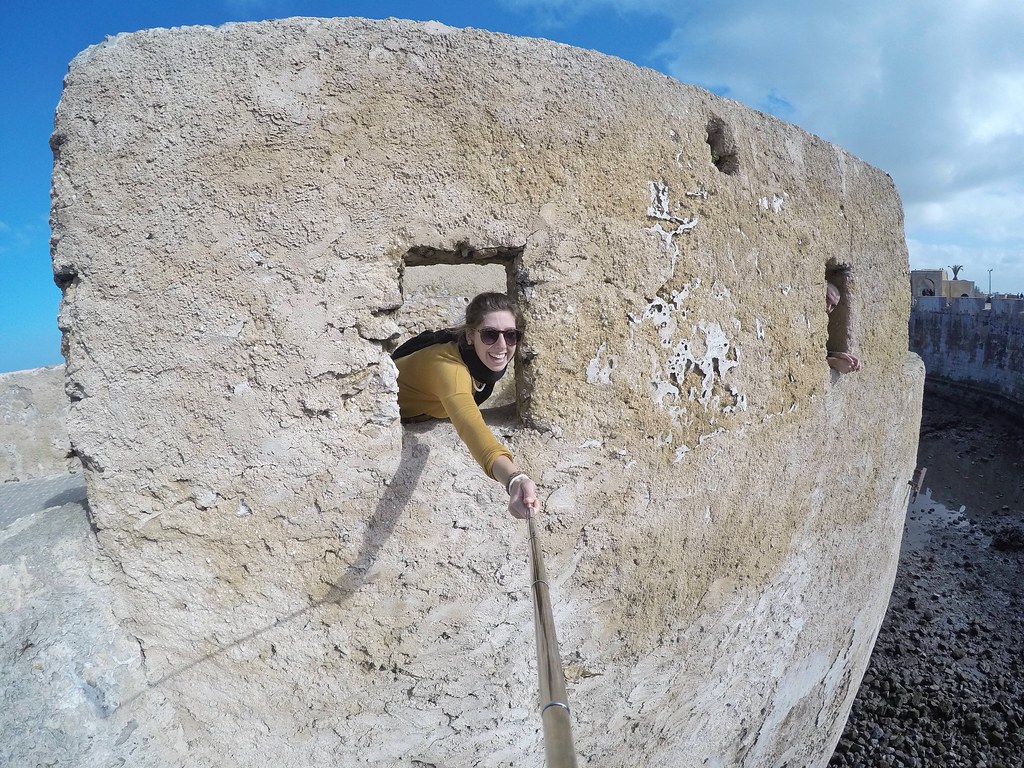 The next day we checked out the thick rampant walls surrounding the little medina. The tide was out when we timed our visit so it didn’t look very scenic. We could walk along a section of the wall too, which still had cannons positioned out to sea. In the little medina was a very pretty mosque with a turquoise roof and perfectly painted white walls. 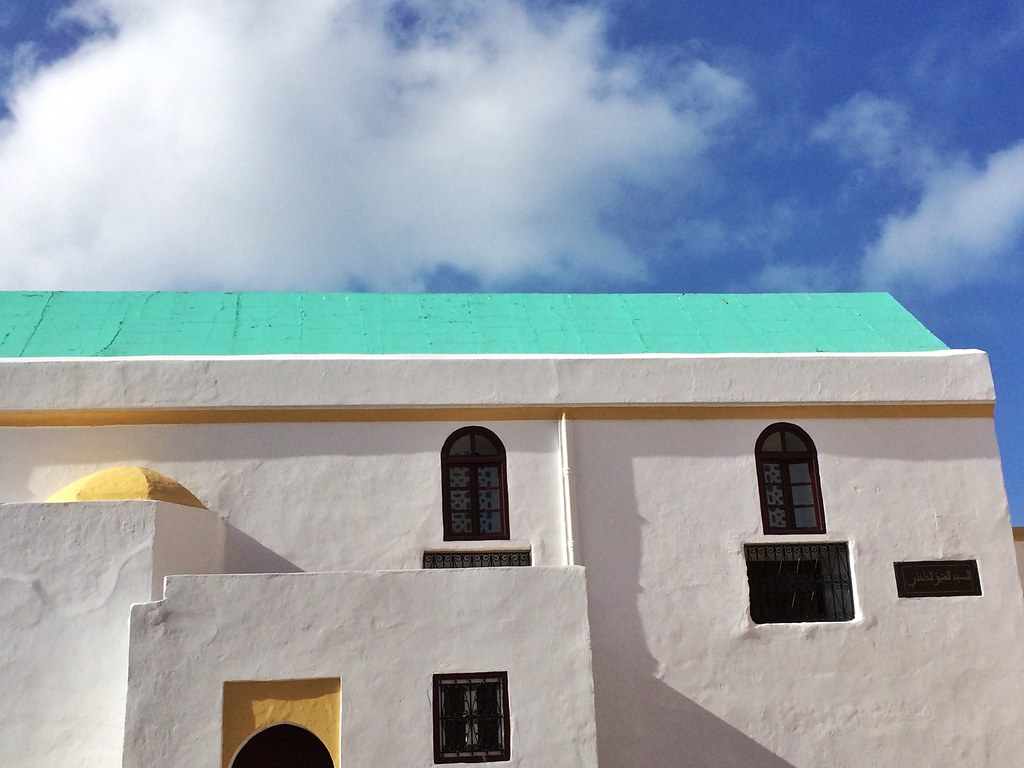 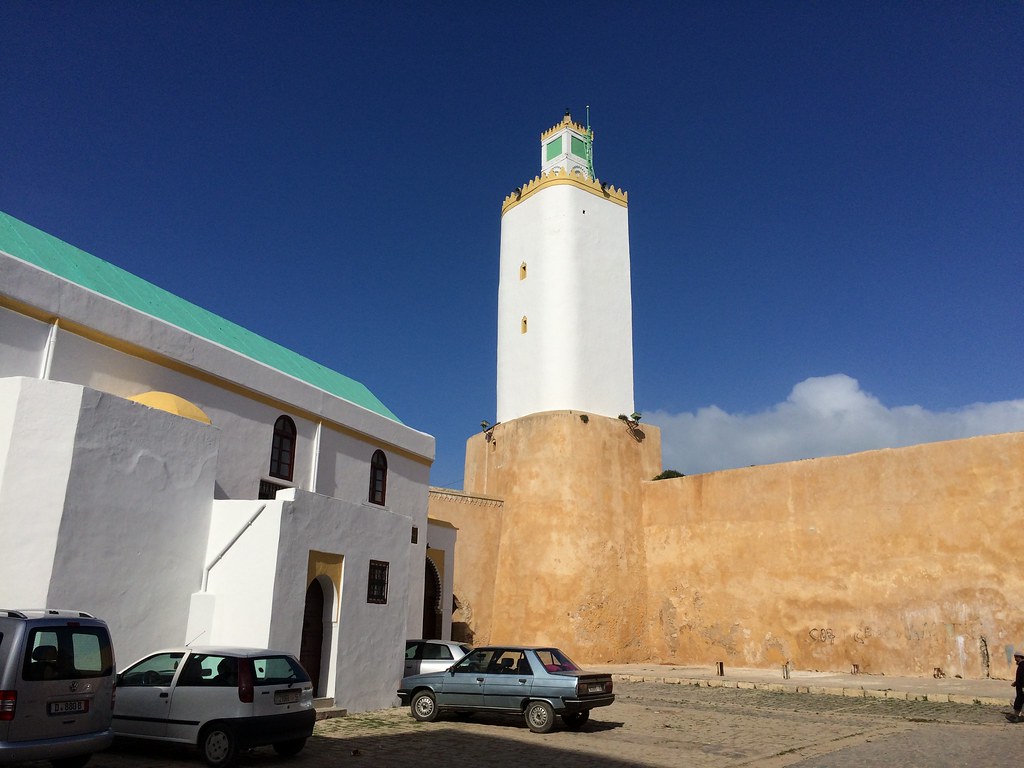 Lonely planet suggested that we should ‘marvel at the cistern’. So, we figured we’d check it out and were happy that we arrived just in time for a little group tour to find out what exactly we were ‘marvelling’ at. Sadly the guide only spoke French so we had no idea what we were looking at. It was a big, dark room, very gothic style with arched pillars everywhere and a single hole in the ceiling where light beamed through. The ground was covered in a thin layer of water which reflected all the pillars. It was quite impressive actually and has been used as a film set for a few movies. Sadly, that’s all I know about the place, so feel free to enlighten us. 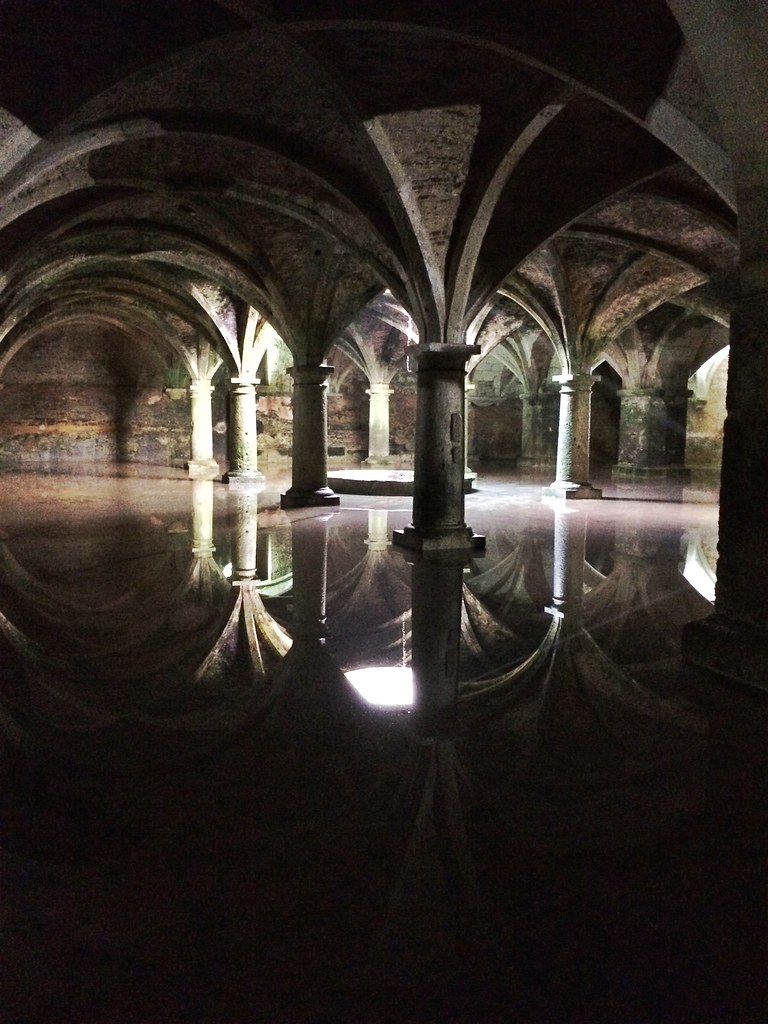 We were quite happy to leave El Jadida, to be fair we didn’t give it much of a chance and didnt visit any nearby beaches but we just wanted a relax day where I could complete my embroidery gift for our family friends.