Somehow on our first Moroccan bus we ended up with the only seats with limited leg room. I felt like we were back in Asia, squeezing our long legs in while looking around at everyone else with a foot of space in front of them. The bus stopped in a flat, lifeless place for lunch where there was a tented barbecue area next to a butchers stand. Skinned lambs were hanging up at the entrance of the shop and Craig accidentally walked into one. He bought a bowl of meat and then had it barbecued and served with warm bread. Then we swapped seats on the bus so I didn’t have to sit next to his meaty arm.

The scenery soon began to change as we entered the Rif Mountains. Lush green fields lay below hills and beside ravines as we gained elevation. After a few big bends, Chefchaouen became visible beneath the mighty Rif Mountains and every Asian on the bus said ‘ooooooh’ at the same time. A petit taxi led us from the bus station up to the walled medina where we stepped into a world of blue. Our hotel was fairly easy to find, it only took three people directing us opposite ways but eventually the final one knew what he was talking about. Our room was quite a change to our riad in Fez, yet it still wasn’t cheap at €25. It was a teeny tiny room like being back in the shoe box rooms of Hong Kong. 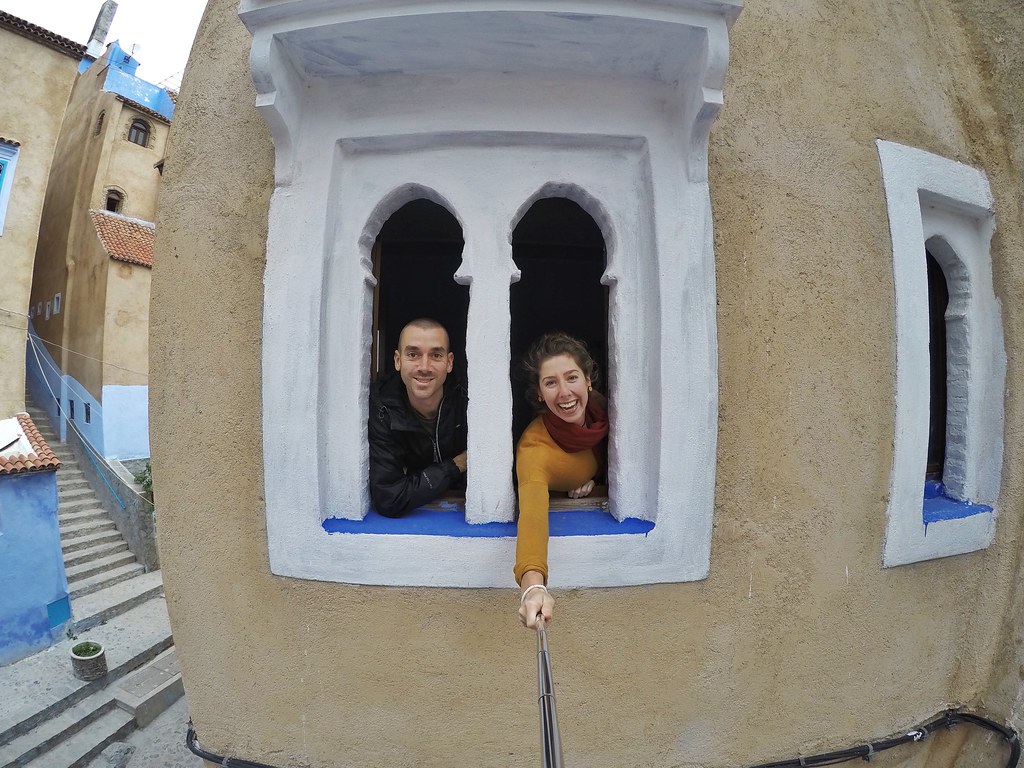 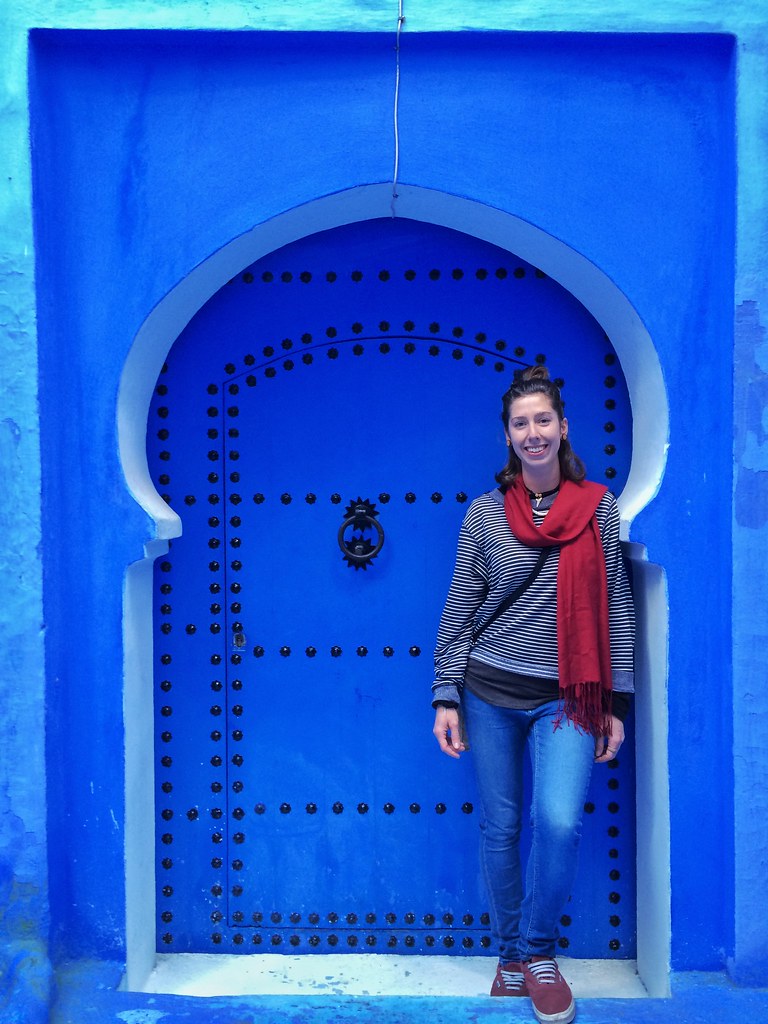 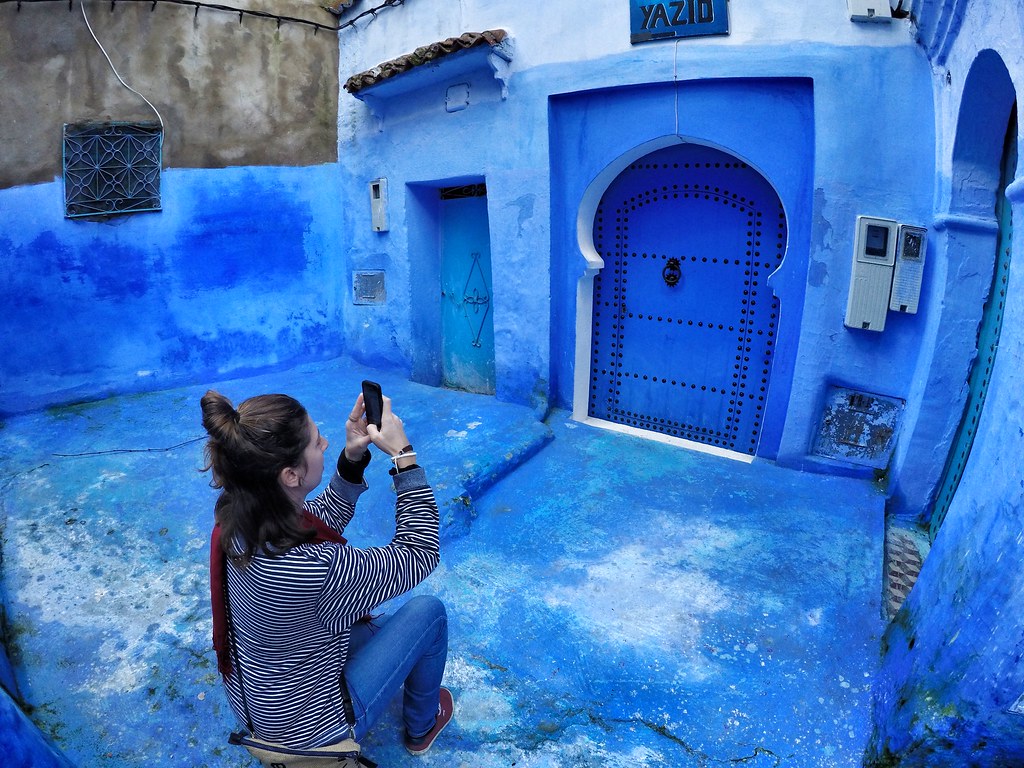 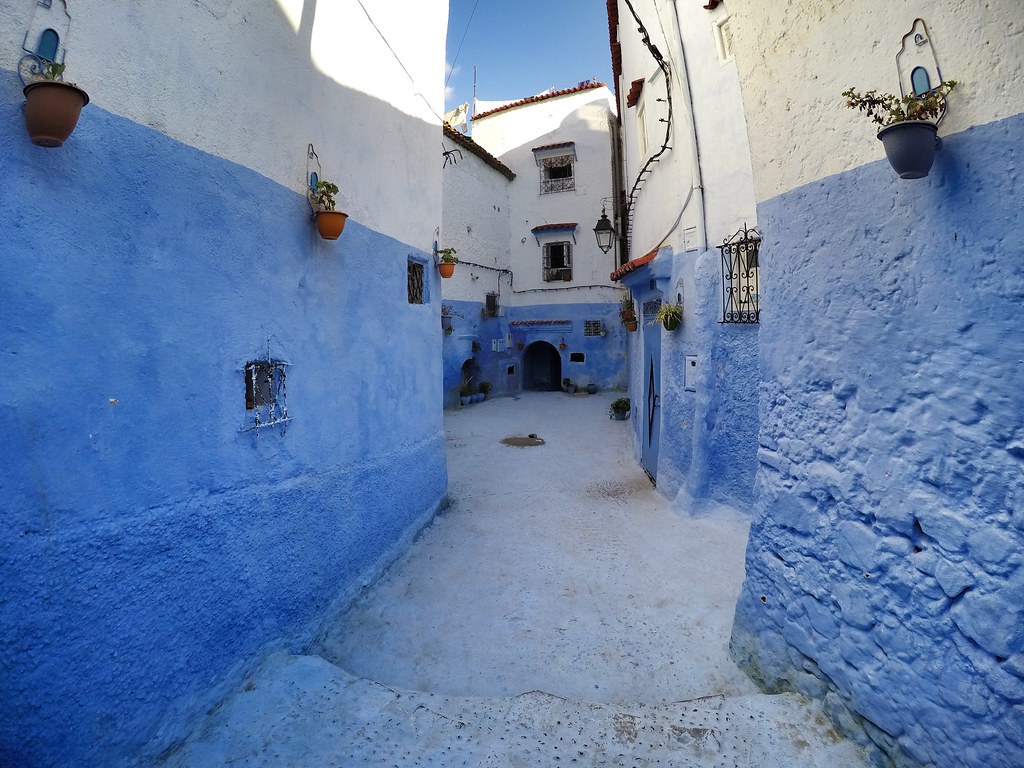 We only had an hour before sunset so we rushed out to see a bit of the blue city and we instantly fell in love with the place. Every shade of blue-paint was used, mixed, and smeared on the old walls. It was the slowest we’ve ever walked in a town as we were taking so many photos. Little blue alleys led off to courtyards filled with blue walls, blue floors and blue doors. Flower pots gave a burst of colour in some areas and we joked that people wearing blue in Chefchaouen were in camouflage. 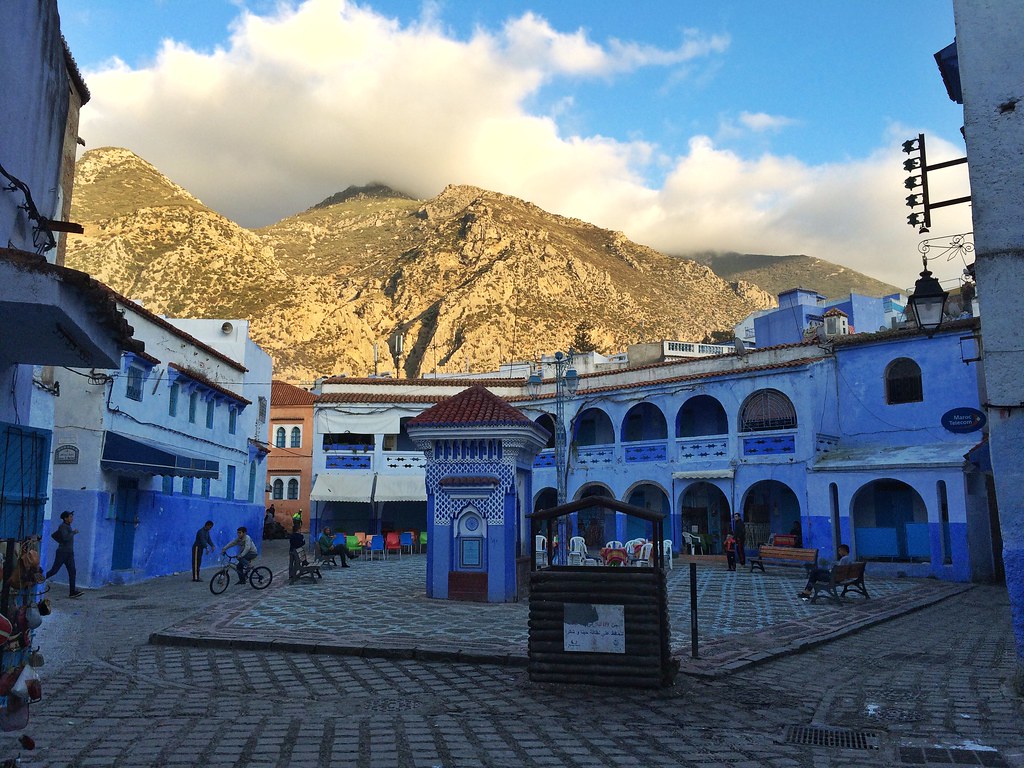 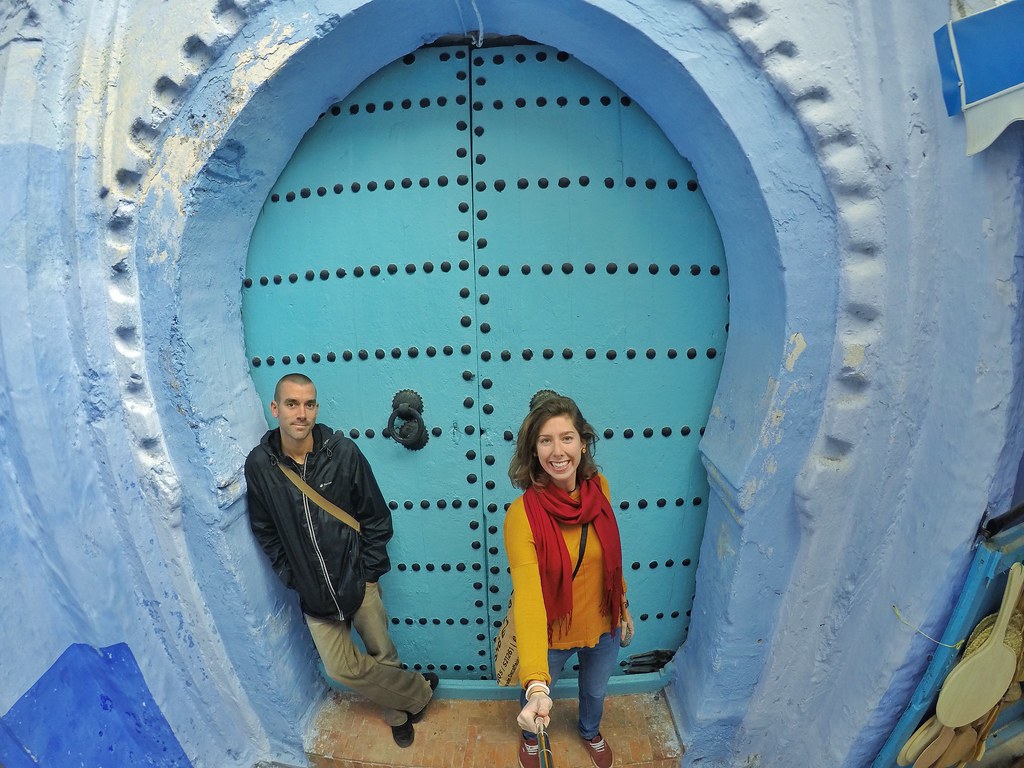 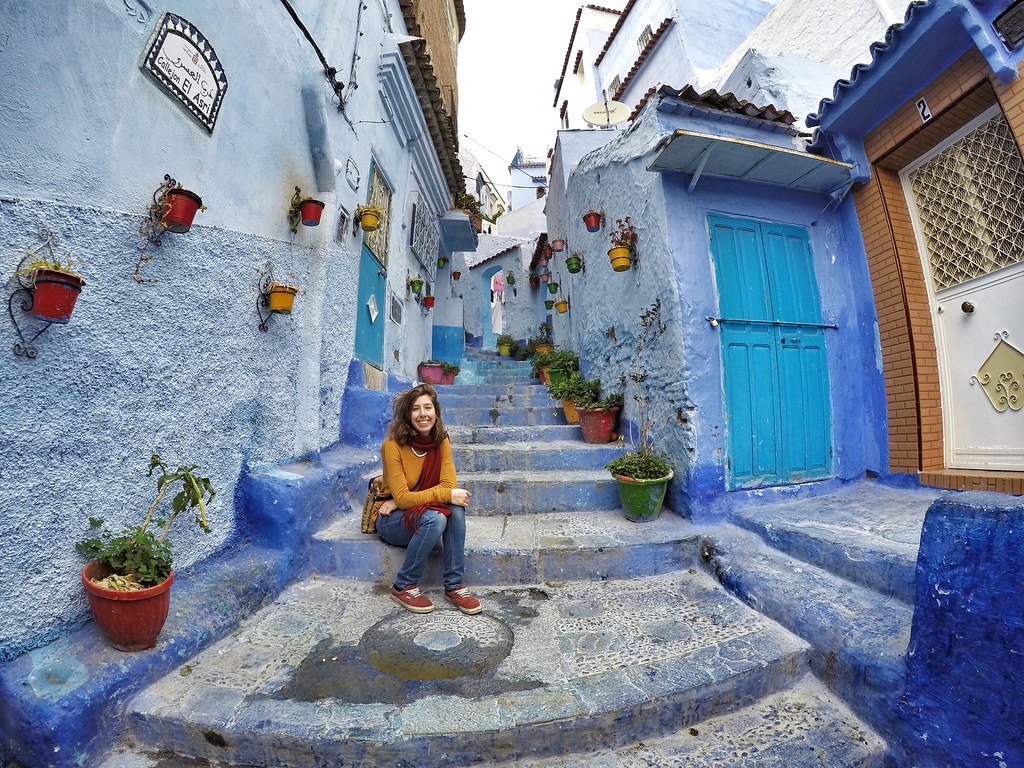 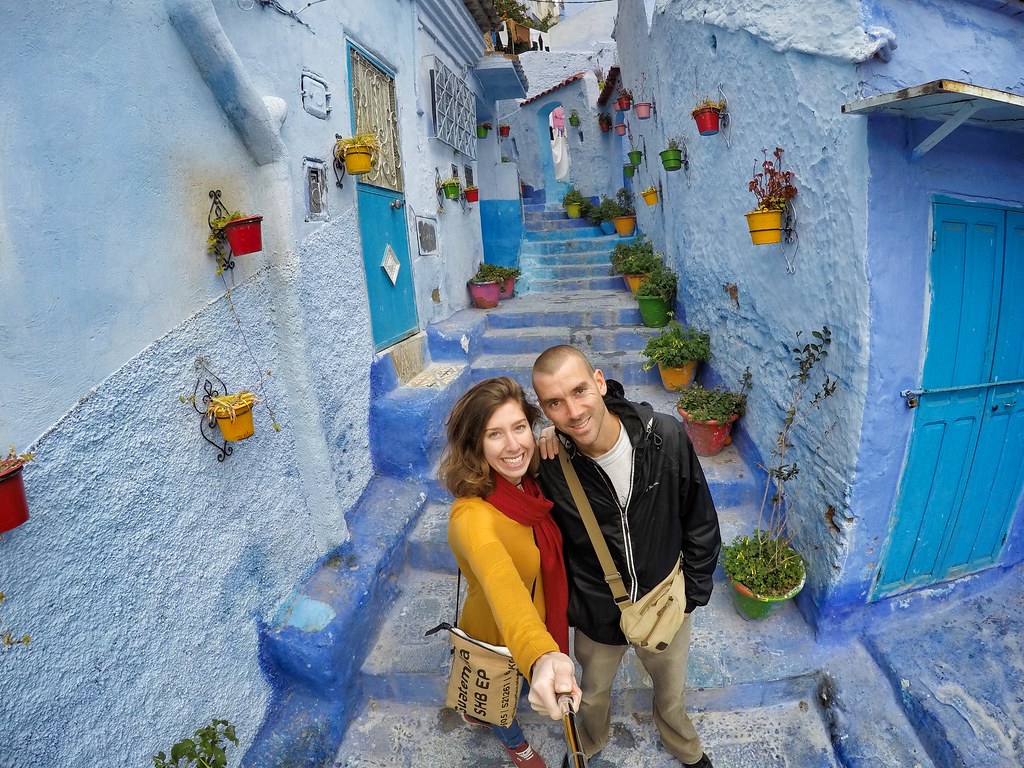 It was a lovely small medina to explore and we enjoyed getting lost in the winding lanes. We wound up in a big square with a dramatic backdrop of the Rif Mountains glowing orange in the setting sun. We then came across another square where a big terracotta coloured kasbah stole the show. There were three eateries opposite the kasbah with rather annoying touts outside that had even learnt Chinese words to encourage people in. All of the eateries offered basically the same menu with a set deal for 45 dirhams (€4.50). It was great value, with free bread and olives, then soup, omelet or salad to start, for main course there was tagine, mixed grill, pizza etc and a pudding too. The setting was perfect with the kasbah lit up, plenty of people watching and an old man drumming very badly. 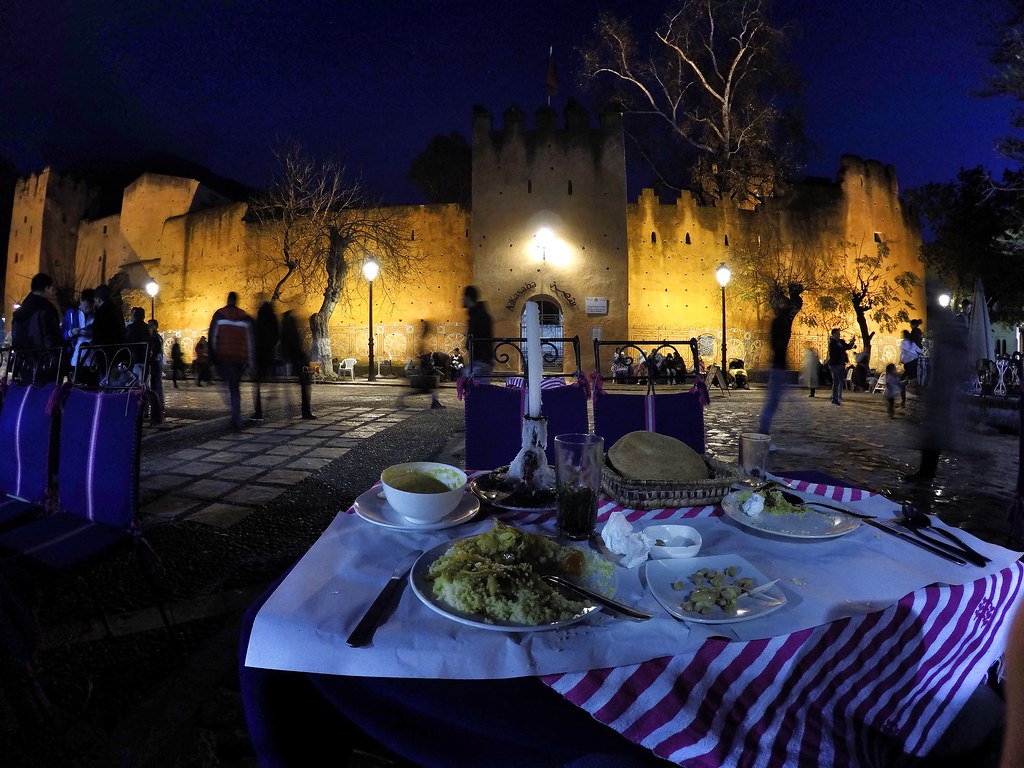 The next day we headed out of the medina to the old Spanish Mosque. The path was lined with cacti and almond blossoms. Shepard’s herded their sheep and as we reached the top we got a view of the blue medina sat beneath the highest mountain in the Rif Mountains and one we plan to hike up, Jebel El Kelaa. One thing we didn’t know about the area was that 42% of the worlds marijuana is grown here. A man asked us where we were heading and we explained that we were just going to the mosque but we’ll be climbing the mountains tomorrow. He warned us to not take the route between the mountains, as it was a major weed production area. Apparently it can be dangerous and police may be there and accuse us of buying drugs, which is something we definitely didn’t want to get involved with. Luckily there was another route up the mountain and once the man brought our attention to the narrow valley area between the two mountains we noticed men hanging around there. One night when we were having dinner a man walked past us and quietly said something to Craig so I asked him what it was and Craig accidentally muddled up his words “he asked if we wanted any gash…haha I mean hash!” Oh how we laughed. 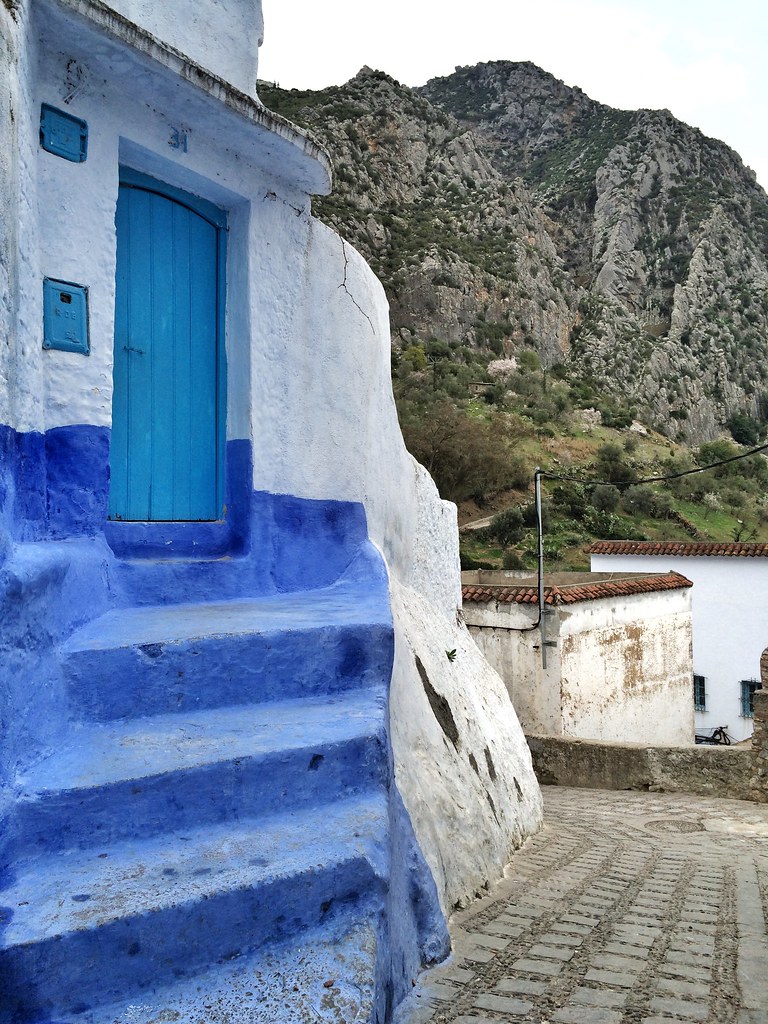 We headed into the kasbah which was rather uneventful. Now we are further north in Morocco the locals are speaking Spanish, so the information plaques were in Arabic, French and Spanish, so we didn’t learn a thing about the kasbah. A kasbah is sort of a fortified house, with big castle-like walls made of a red, coloured material. The centre of the kasbah was a manicured garden with palm trees, flowers and plants. We climbed up the steps to the highest rooms where we could poke our heads out the window and enjoy the view.

After strolling aimlessly through the labyrinth of blue lanes we ended up in the locals market. There were lots of closet-sized shops selling clothes and produce. We filled up on salted and sugar coated nuts and bought a beautiful red and white stripy piece of fabric which the locals wrap around them like a skirt. We rarely walked the same route through the medina and were forever finding new beautiful alleys, some wide and adorned with royal blue arches while others were only wide enough for a human to squeeze through. We both agreed that Chefchaouen was probably the prettiest town we’ve ever visited and tomorrow we’ll explore the mountains and see the part of the blue city that most people don’t. 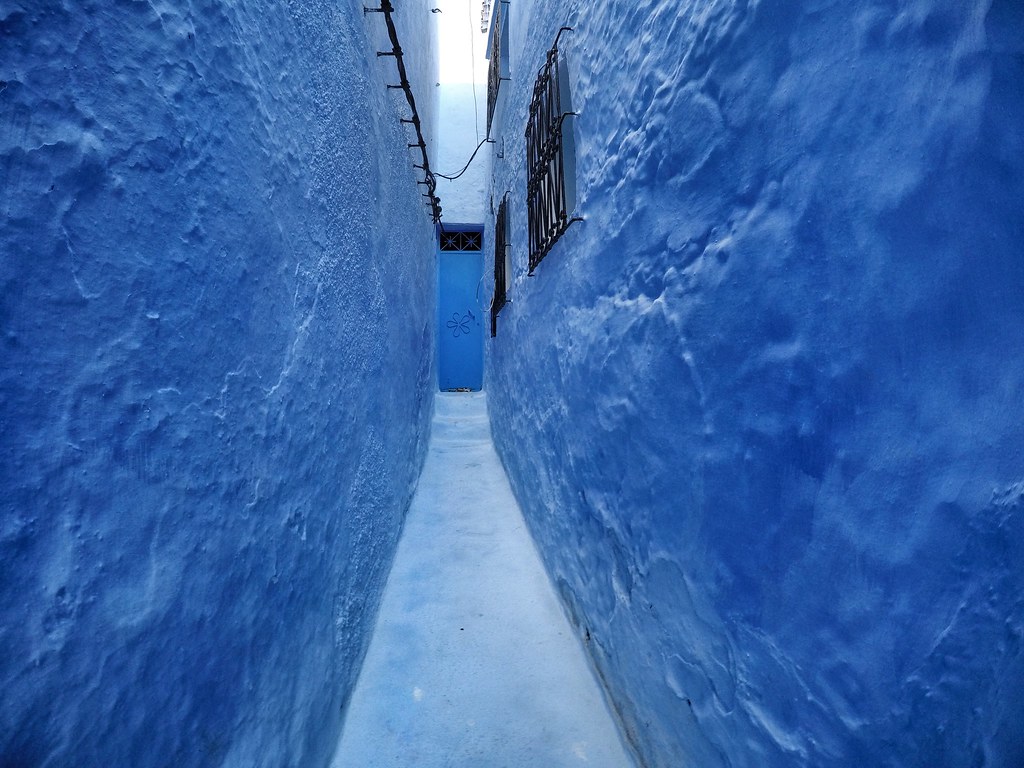 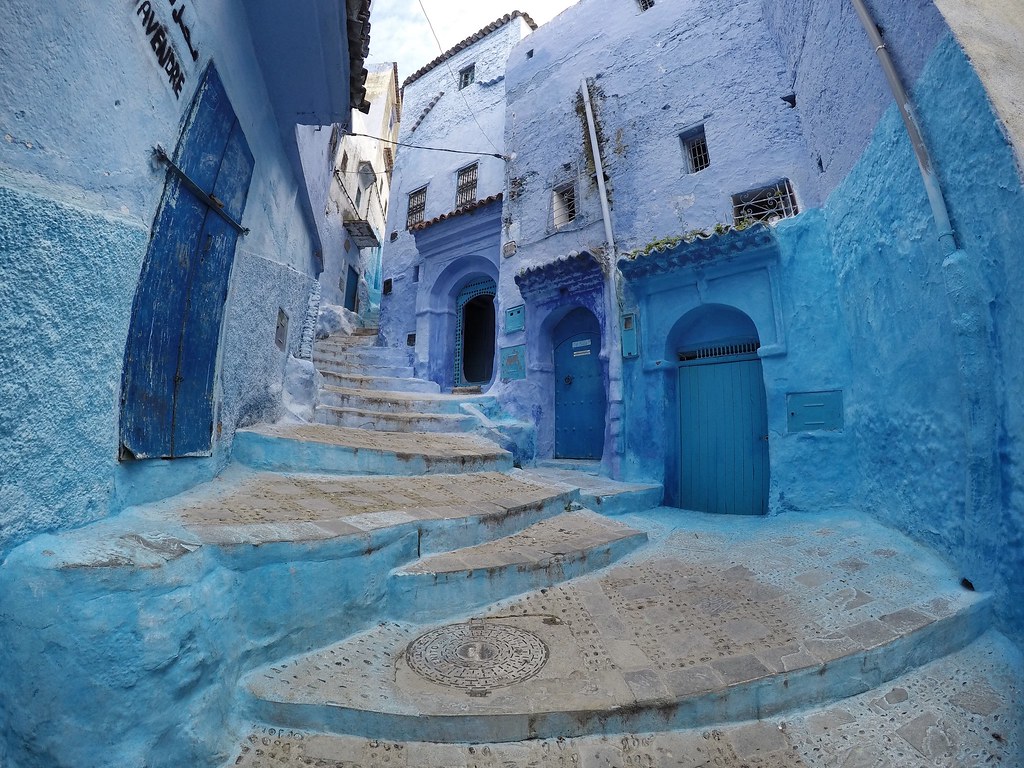