We spent a few days exploring the urban-maze of Fez El Bali and taking in all the sights and smells along the way. It’s totally pedestrianised so all the market stalls, cafes and hotels get deliveries by men with pulley carts or by very sad looking donkeys. Somedays we’d stick to the main routes, following the crowds and areas full of shops, while other days we’d veer off and take random alleys, some so narrow that wooden planks were used to keep the buildings apart.

The only time we got pestered in fez was when we got close to the tanneries, but it was kind of handy as without men calling us over we’d of never found them ourselves. We were led into a leather shop and went all the way to the roof top where we had a view down onto an ancient tannery. They don’t use machines and all the tanning is done in the natural way. Circular vats were filled with colourful liquid and men were knee or thigh deep in the vats, stepping on the hides like they were in a barrel of grapes in a vineyard. I can’t even begin to tell you how bad the smell was though. It was something I hadn’t smelt before and it really had me on the verge of gagging. It was like a mixture of urine, death and vomit and I felt so sorry for the men working in them. 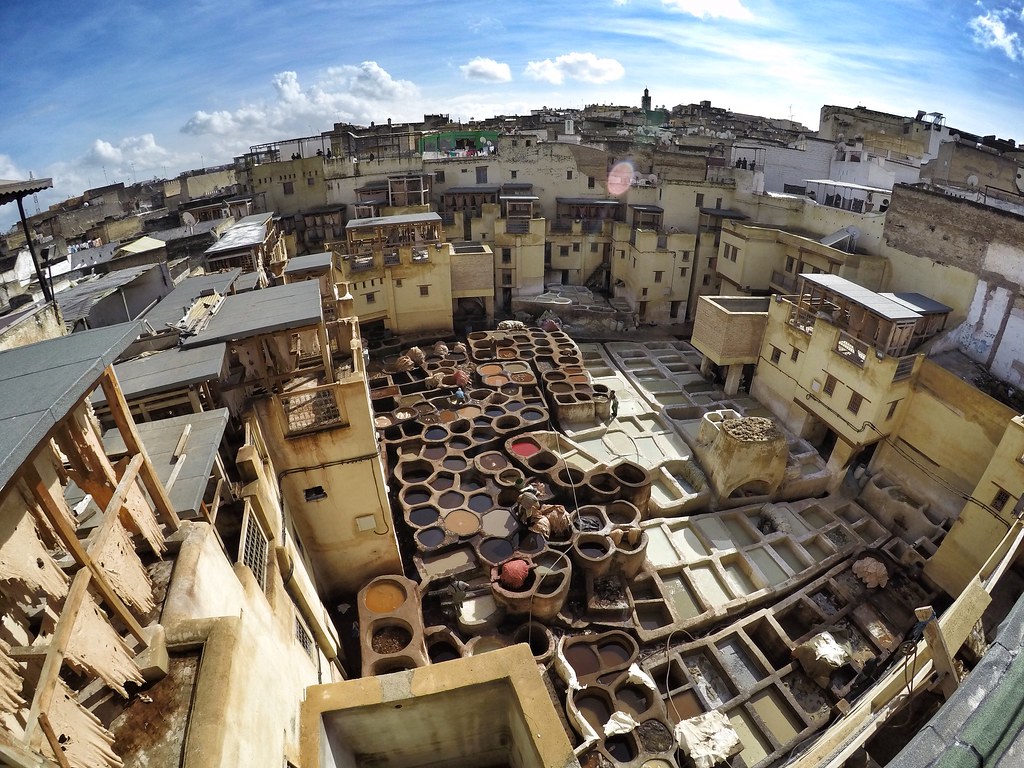 It became evident why it all smelt so bad once I did some reading up on it. The raw hides are first put into pits filled with cow urine, water and salt. This method helps to remove flesh and fur and also breaks down the tougher leather. It takes about three days and then the workers can scrap away excess fat and fur. The hides are then moved into other vats filled with pigeon poo and water. The ammonia in the poop softens the hides and helps them to absorb the dye. I think this will be quite an eye opener for any vegetarians out there who not only unknowingly wear animal products but also have no idea how their nice leather shoes were made. The colourful pits are filled with natural dyes using saffron, indigo, poppy flowers, henna, mint and more. It was pretty fascinating to watch these men use such a traditional method even today. The coloured hides were then hung up to dry on the surrounding rooftops. The shop owners didn’t even ask for money to go on the roof, nor did they pressure us to buy anything which was a pleasant surprise. 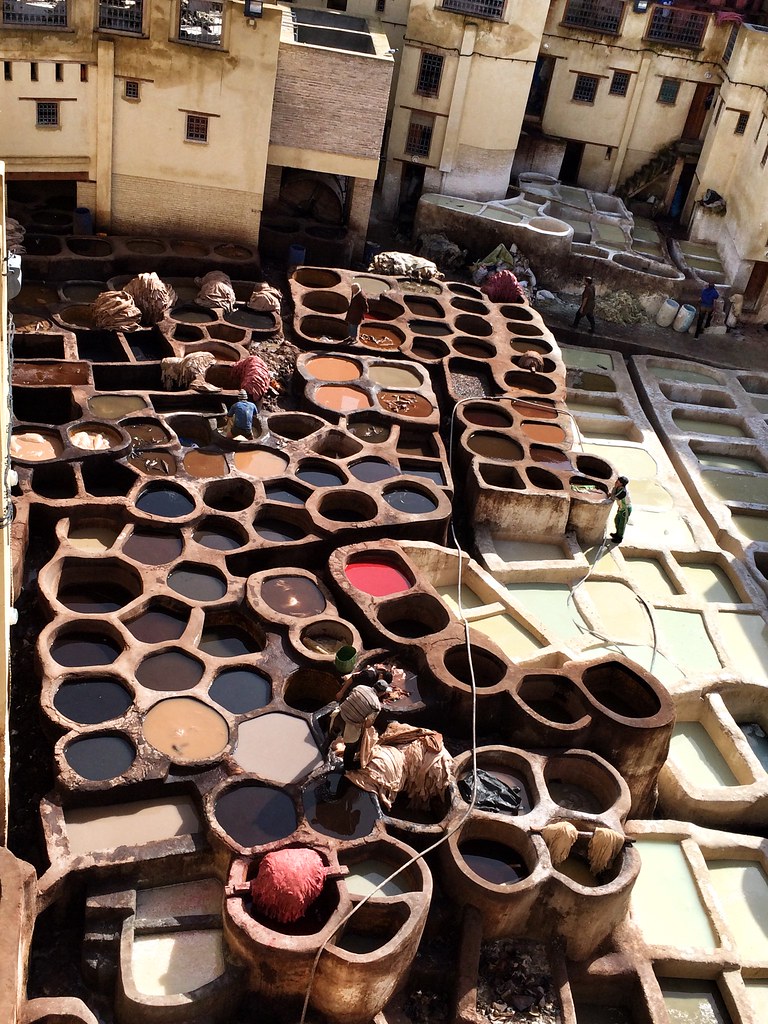 We ventured out the medina one afternoon and into the tranquil Jardin Sbil which had beautiful star shaped water fountains and palm trees rising high above us. Craig went to use the loo in the gardens and when he came out two little boys tripped and fell and the caretaker said “Allah Akbar” to them, I guess it’s the same as when someone says ‘God bless you’ in English. Although in England it’s more likely for someone to chant ‘HE FELL OVER!’ instead. 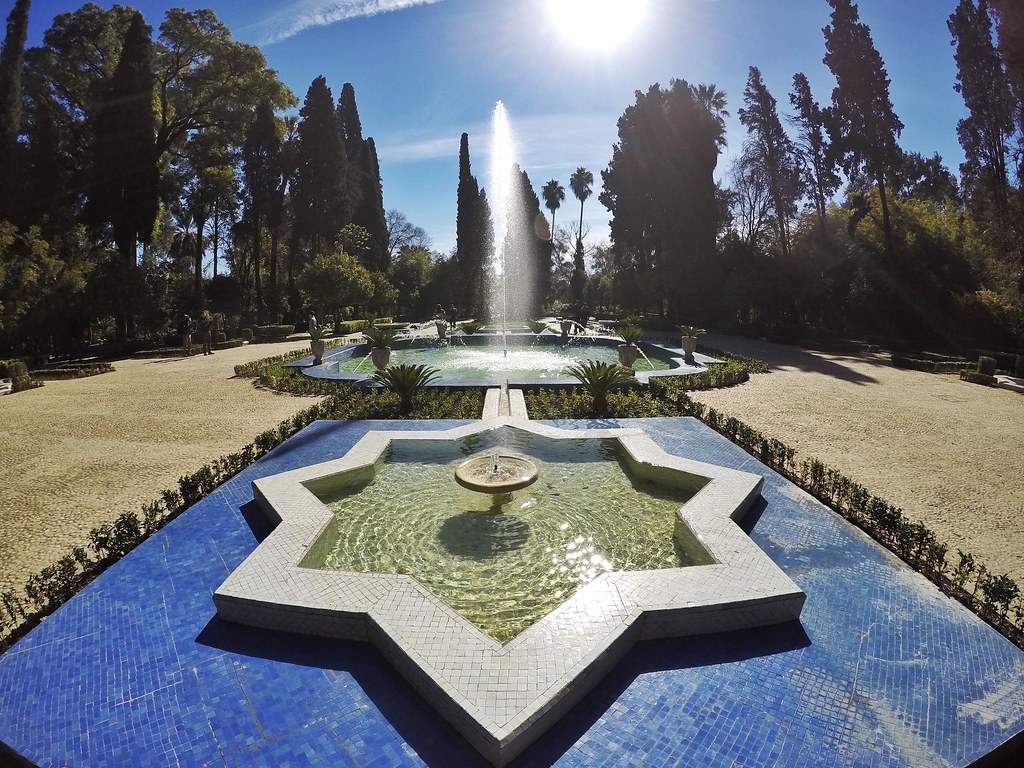 We then got rather lost and wound up in Mellah, the Jewish quarter. It seemed busier than the medina, with market stalls full of fresh produce spilling out into the alleys. One annoying tout was trying to guide us to the synagogue and Craigs too nice to say no so he just goes along with the conversation. I’m the total opposite and can be quite brutal, giving a flat no and continuing on my way. So, Craigs attracted this tag along and I can’t be bothered for him to turn around and ask for money for ‘guiding’ us to the synagogue, so I said we weren’t interested and he dropped off like a fly, and I winked at Craig “that’s how you do it!”. 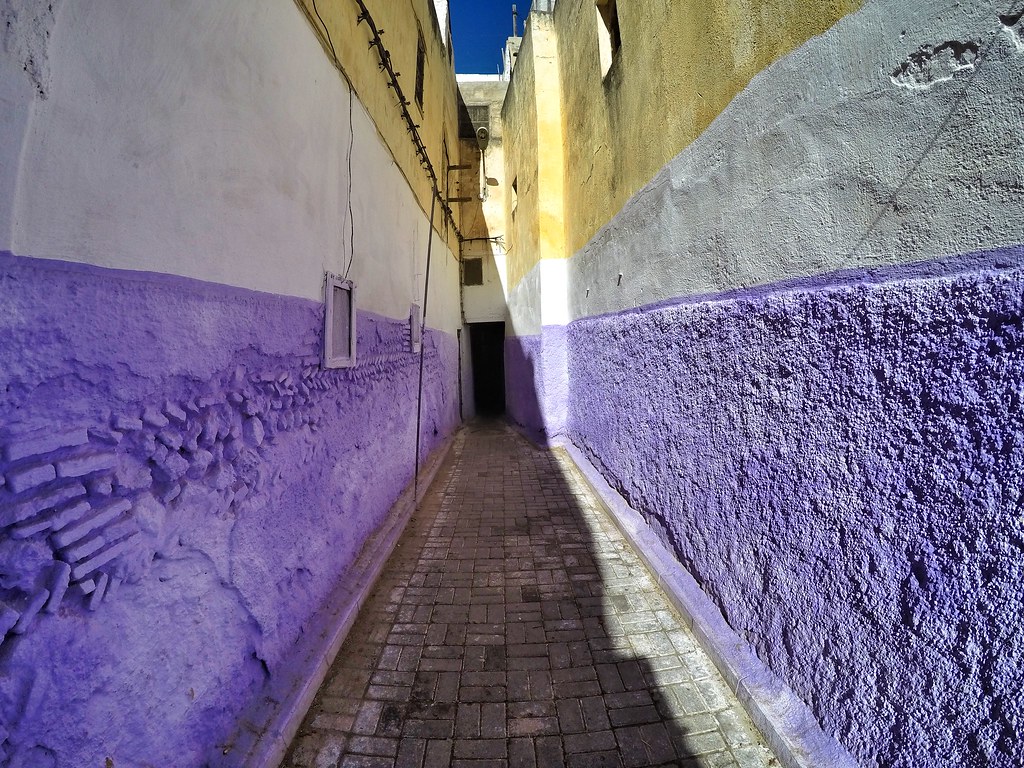 Near Mellah was the Royal Palace which was a fabulous building with 7 intricately designed doorways. Big golden, carved doors and beautiful mosaic arches. There were quite a few beggars around the Mellah area and the busy Blue Gate of the medina. Our legs were pretty tired though so we enjoyed a strong coffee in the warm sunshine whilst people watching. There was one homeless lady, who actually looked a little lost and maybe missing a screw or two and she just stood infront of us. She stared at me, and then stared into thin air and began picking her nose. I think that’s an understatement though, it was more like she’d lost something up her nose and was prepared to sink her whole fist up there and find it. Then she found a bit of bogey and just casually rolled in it her fingers before tucking it behind her ear. Craig and I weren’t sure how to react, we were sort of giggling like kids while gagging and pushing our coffees away. An Asian family took a seat near us and the lady gave money to everyone. I think if I stood infront of her table she’d of palmed me some money. An old lady asked them for money and of course she gave a couple of coins and to our shock the beggar pulled out a plastic bag half full of coins!! I thought it was beggars 101 to never reveal how much you make, she had so many coins. 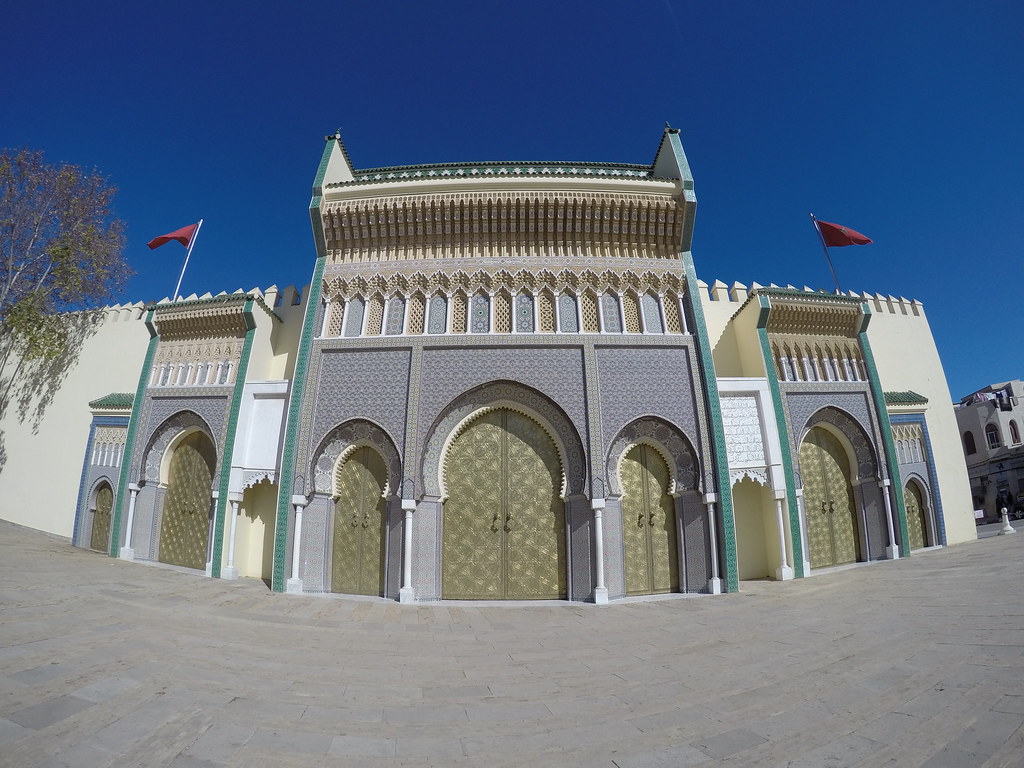 The next day we caught a petit taxi to the Naji Pottery to watch mosaics and ceramics being made. I was a bit annoyed when we arrived because a man tagged along like a guide and I was awaiting his pressurising sales tactics. First we were shown a pit where clay was softening, and then we went into a room to see the clay in action. A man was making it look incredibly easy as he swiped his foot on a spinning wheel which turned his wheel and he gently mounded the clay into a tagine bowl and lid. The next room demonstrated people painting the ceramics, one man working on a huge vase with a detailed pattern covering the whole thing. I think painting a piece that large would drive me mad and I’d lose interest in it. We watched men soldering metal onto plates and vases and then we watched them making mosaic pieces. This was my favourite part; they began with a slab of painted tile and drew rough shapes on them, then they chipped away with chisels and as if by magic a star shape would appear. The mosaics were then positioned upside down (so they have to remember what colour they put in each position) and then when it’s complete its covered in concrete and lifted up to reveal the perfect mosaic on the other side. We wandered through a showroom area with fabulous mosaic water fountains and fireplaces which cost €10,000 including shipping. I think the guy thought I was interested in buying one when I asked the price – it seems that regardless of how us ‘white folk’ dress, we look wealthy and they think we can afford anything. I asked how much without shipping and it was around €6000, though I’d imagine if you were genuinely interested then you could barter. They were stunning pieces though, so I think Craig and I will try and make our own version when we return home. 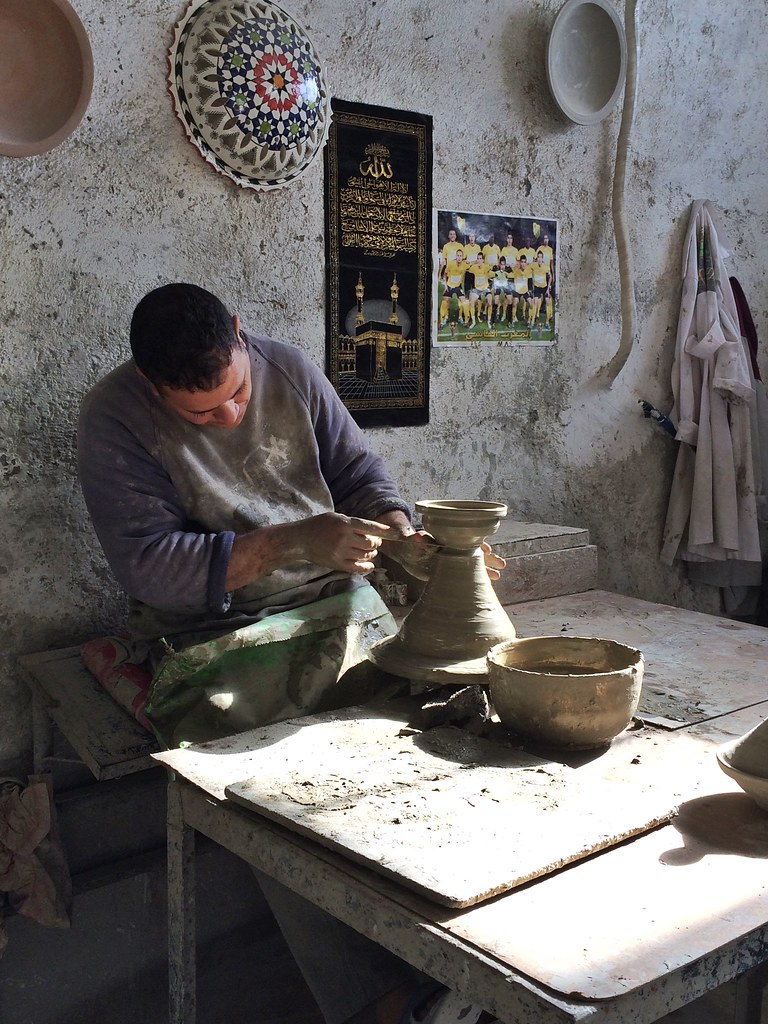 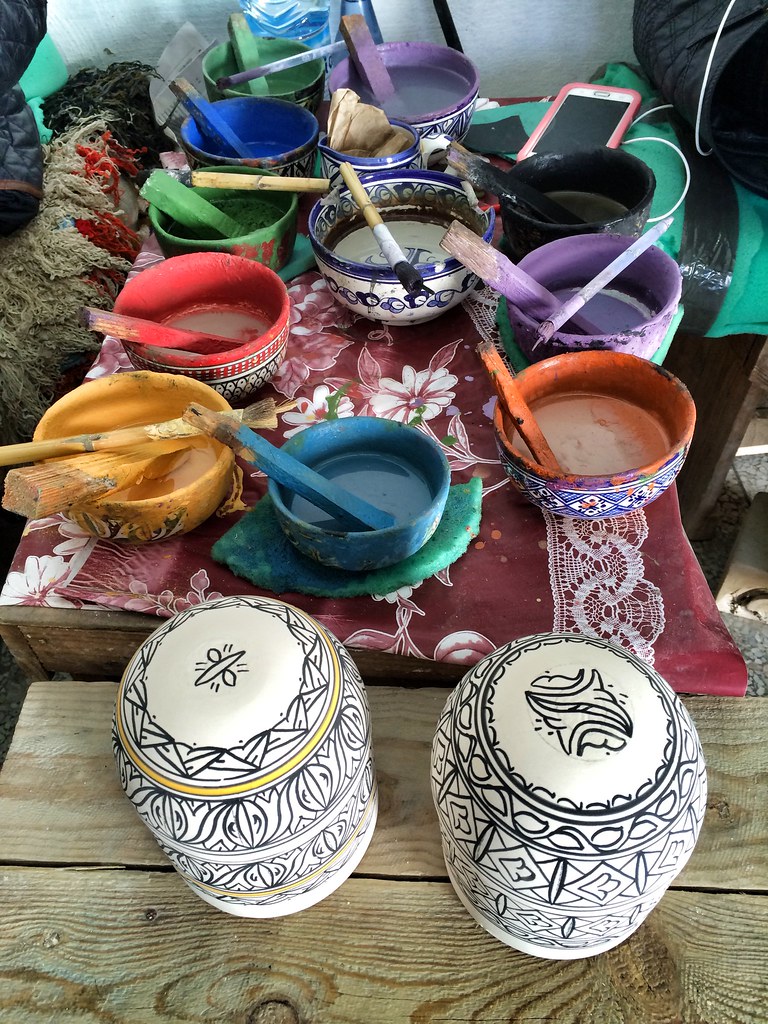 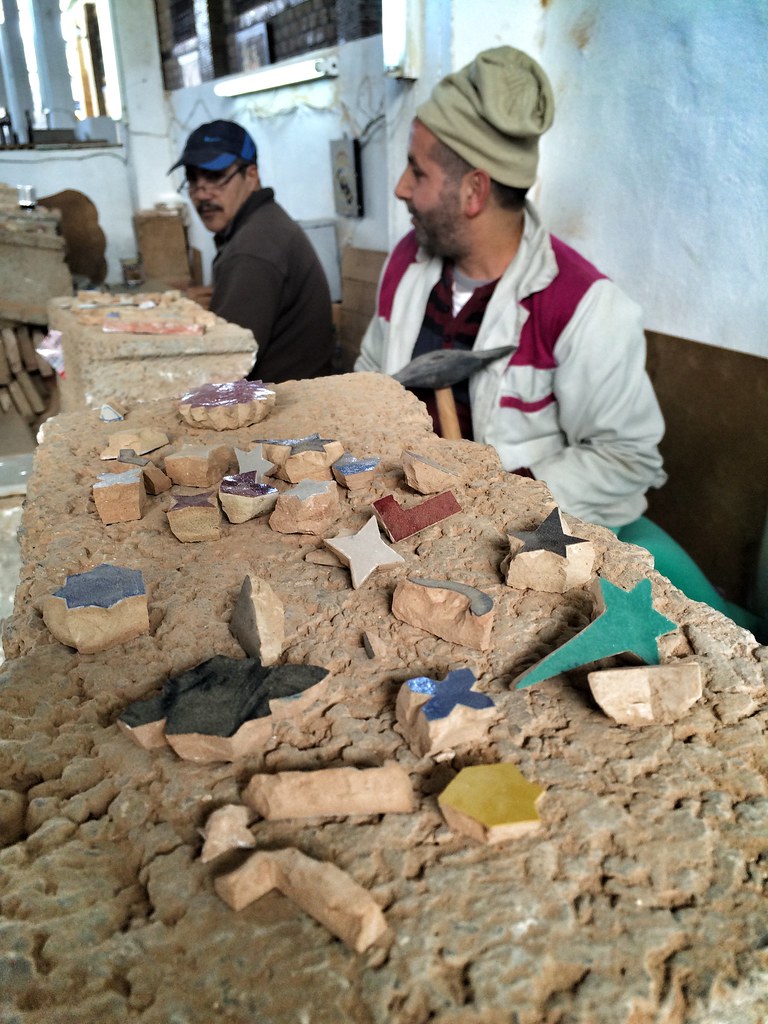 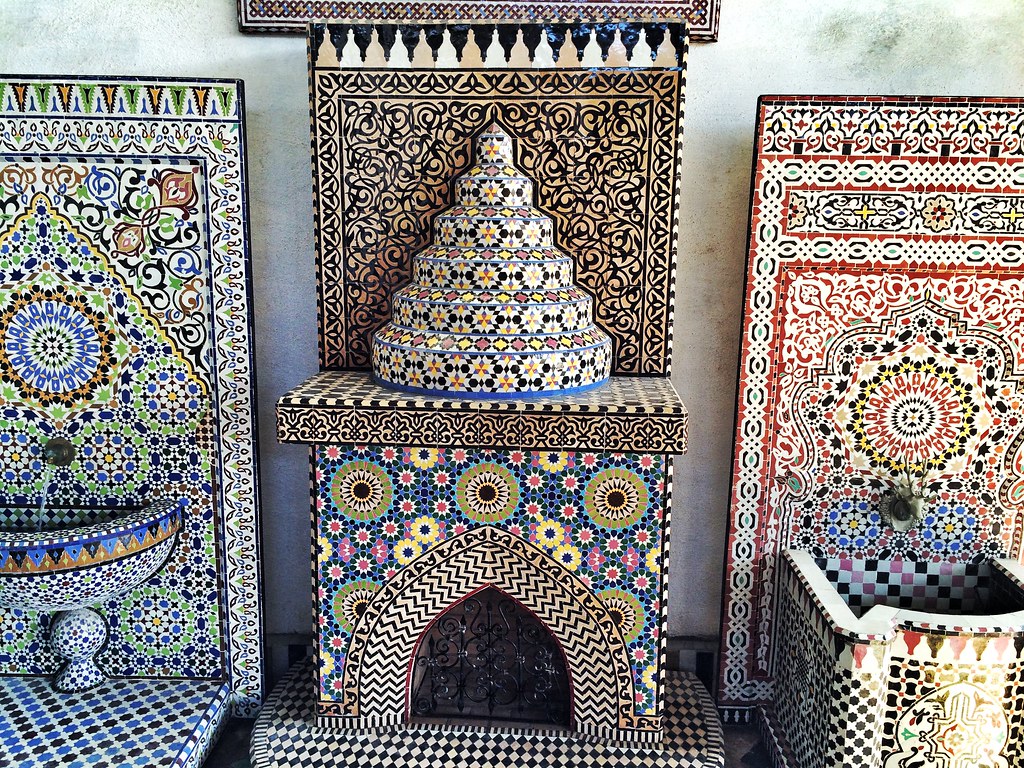 On our way back to our riad we headed up Bouj Sud, a hill which overlooks the walled medina. It was nice to see from a vantage point and a sea of beige buildings spread within the walled town. We were surprised to see so many lush green fields around too.

When we tried to book our bus ticket to Chefchaouen we were told everything was booked, so we had an extra day in Fez. Four days was probably too long but at least by that point we’d found our favourite eateries and knew our way around parts of the medina. One eatery we found offered a set meal for 60 dirhams (€6) and I wasn’t too hungry so we decided to share one between us. It was weird though because we were both given a bowl of soup, instead of just one, plus the usual olives and bread which come with every meal in Morocco. But then a humongous salad came out and we just awkwardly left it and just ate the soup, convinced we’d mucked our order up. When our tagine turned up we said we’d made a mistake and didn’t order the salad and he said it was all included and for ONE person. My god, it was a bloody feast, so we can definitely save money by ordering one meal to share. Now it’s time for us to explore the blue city of Chefcheaouen four hours north in the Rif Mountains… 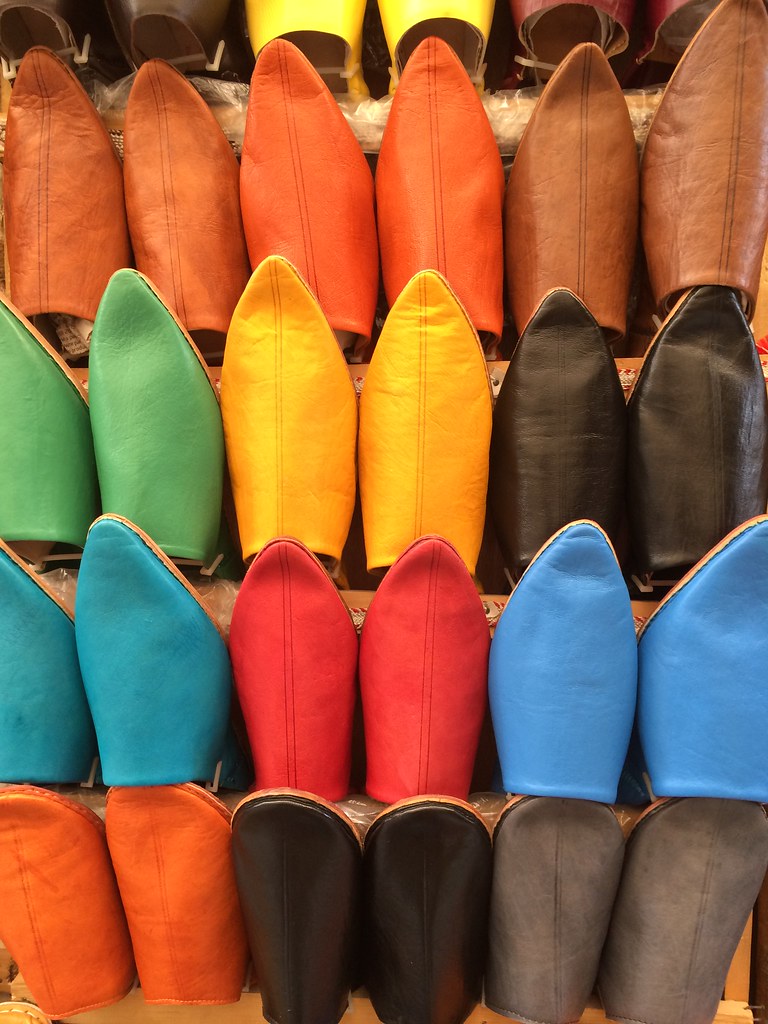 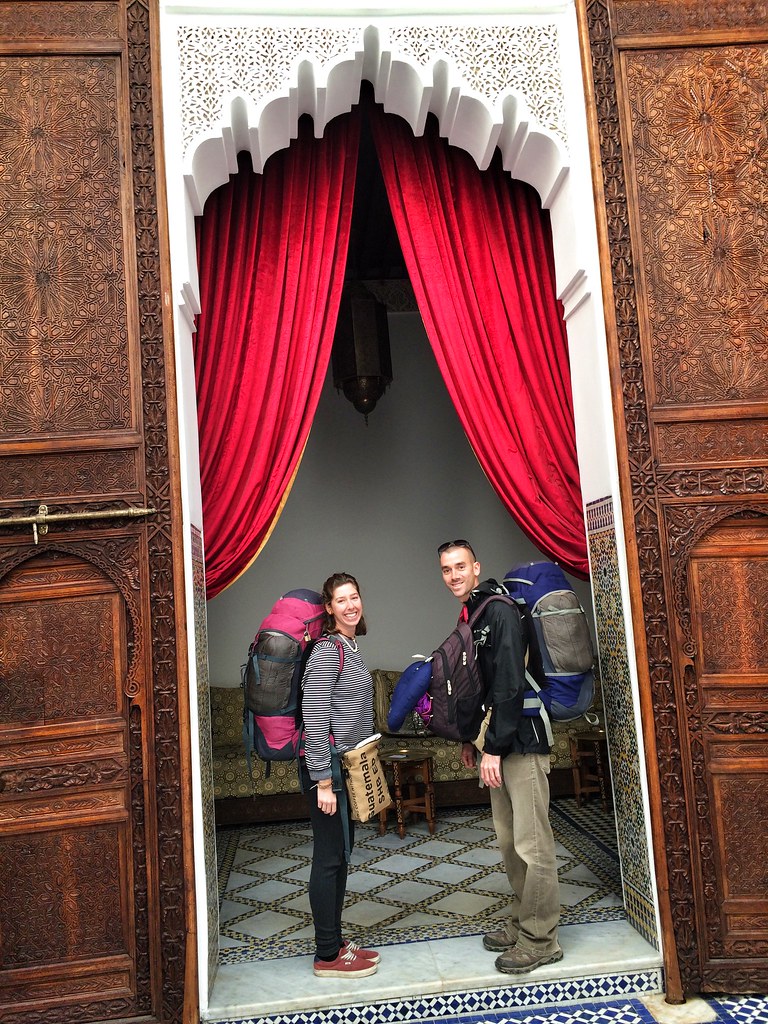