Considering we normally hate cities, Athens was doing pretty well in our books. It was really nice visiting in winter without the crowds or the heat and just a very pleasant place to stroll around. The Plaka neighbourhood was particularly nice and had lots of alleys filled with souvenir shops and eateries. We also came across a lesser known area of the city called Anafiotika. Its an old neighbourhood built by men from Anafi Island in the Cyclades. These islanders were known for being the best builders so were brought over to Athens to help develop the city. They needed a place to live while there so they built little Anafiotika for themselves. The architecture and narrow alleys were designed to resemble their island so it’s an odd sight to find in a city centre. 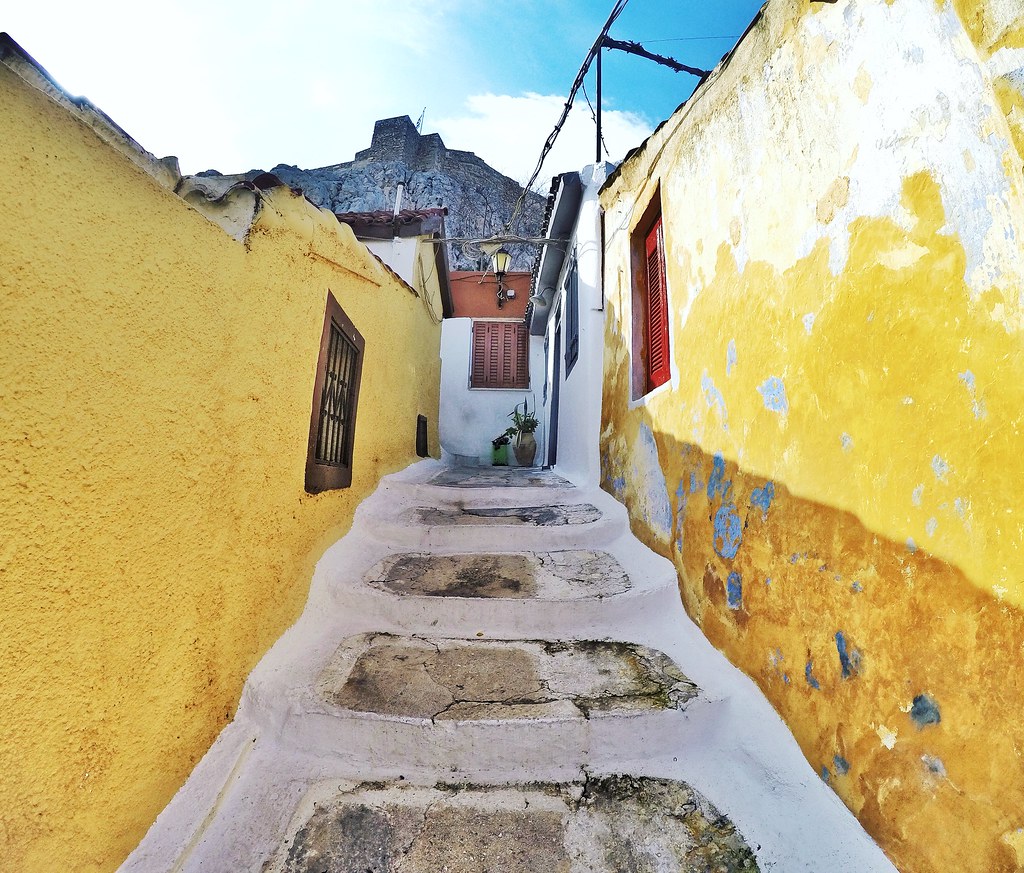 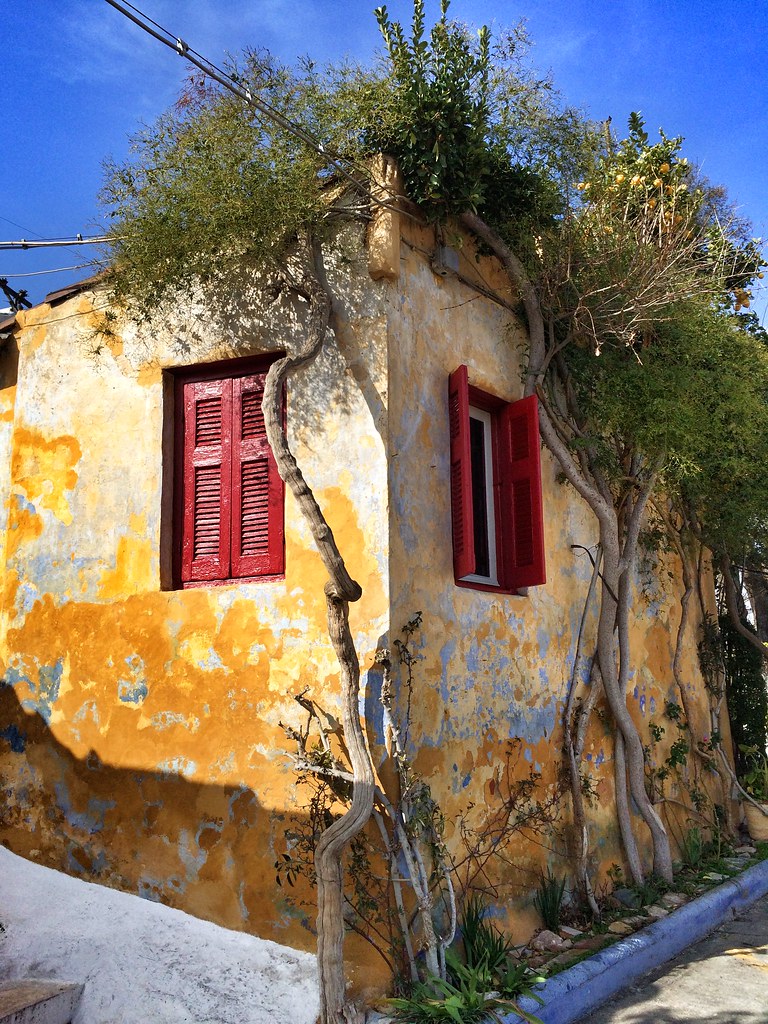 We managed to find it by heading to the base of the Acropolis from the Plaka area. Then alleys led up the hill-side as if they were leading to someone’s back door or to a dead end. It was a fun area to explore with lots of colourful doors and shutters, plants climbing up buildings, laundry hanging off roof-tops and cats hiding in flower pots. Sometimes the alleys were just 2ft wide and we questioned whether we were going the right way but we soon realised there was no wrong or right way and enjoyed getting lost. 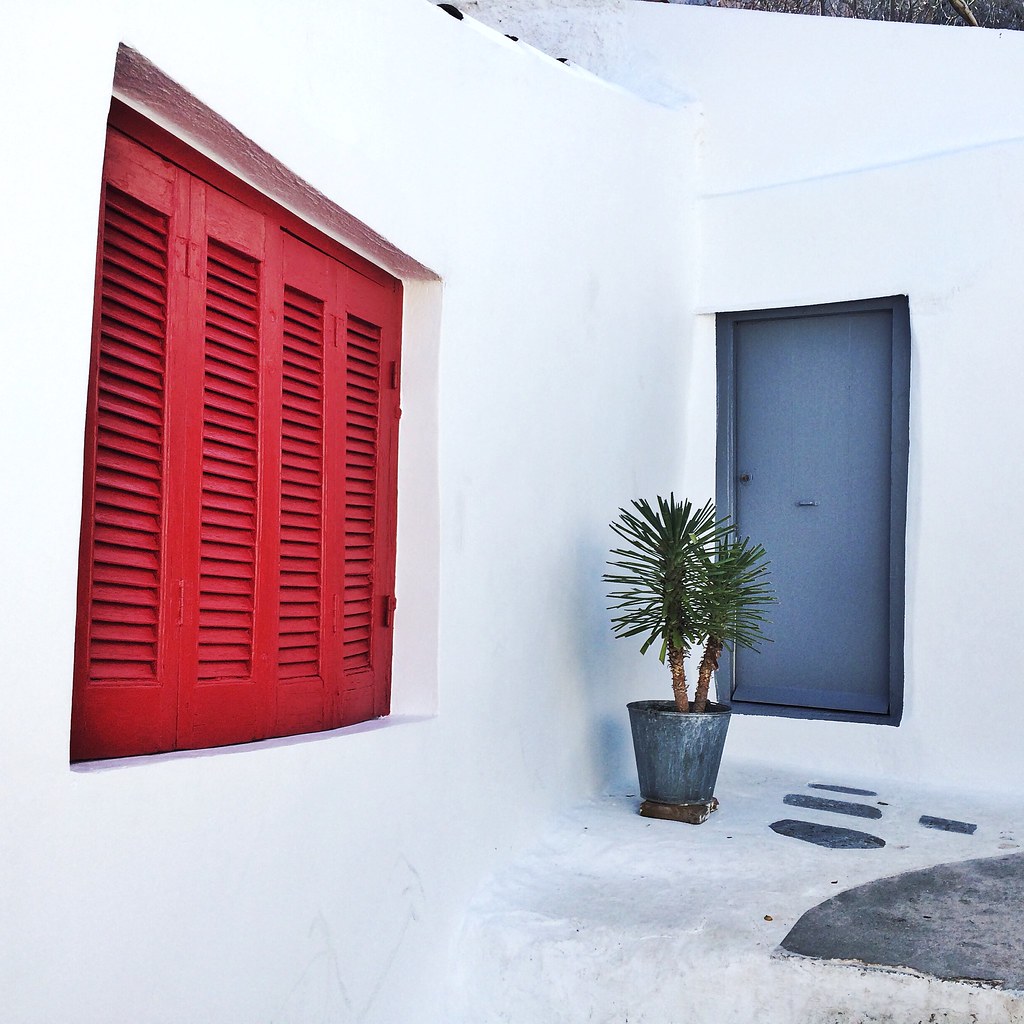 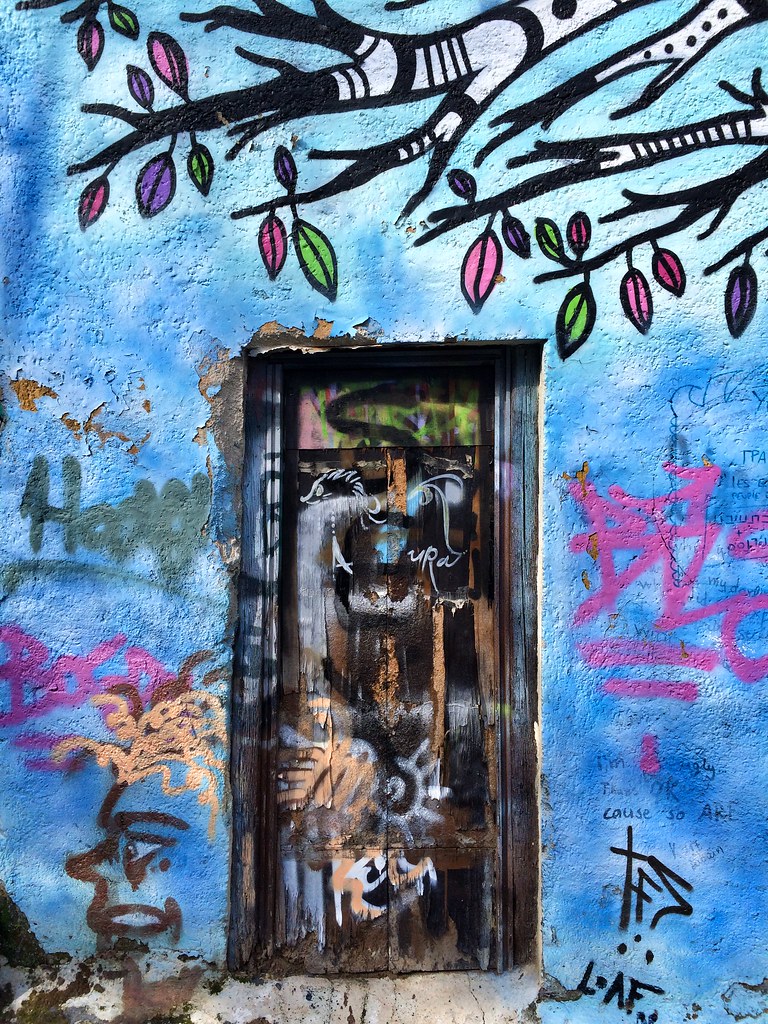 One thing we noticed in Athens is that graffiti covered so much of the city. The majority of it wasn’t good though, it was just tacky tags which was a shame. There were a few cool bits of street art in Anafiotika and we also spotted a hilarious bell-end which Craig casually posed next to. It didn’t take us long to spot another penis and then another and it soon became a bit of a fun game wandering round Plaka spotting bell-ends. 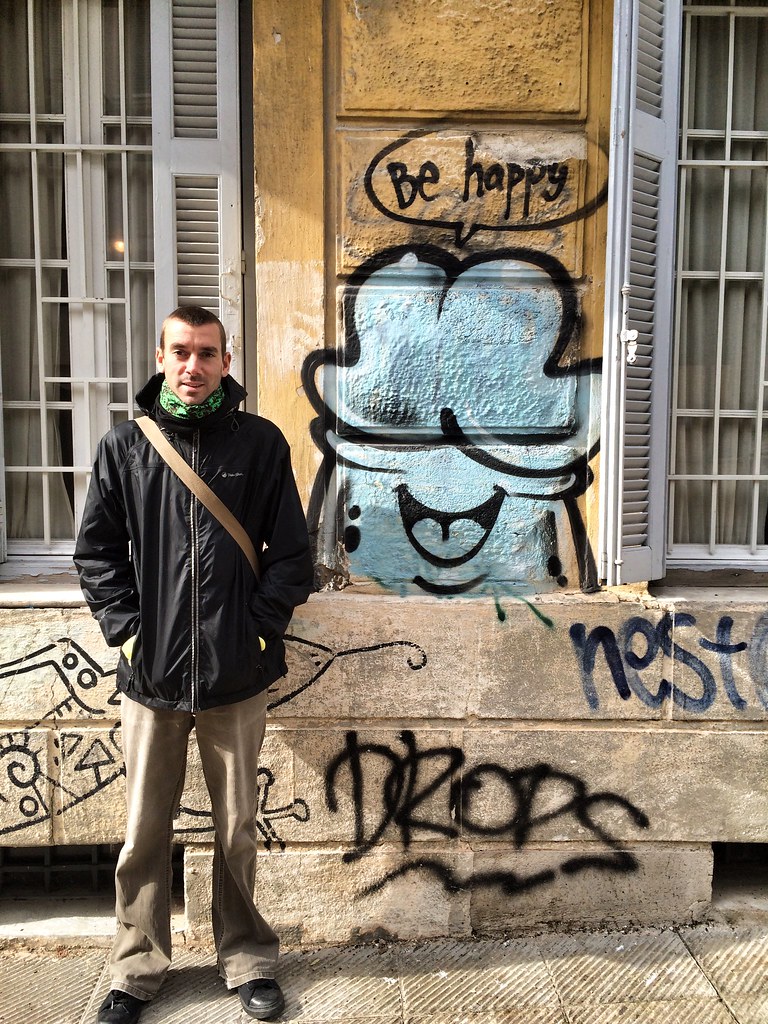 We visited the Acropolis Museum which was full of artefacts; lots of beautiful sculptures, pots and bowls. It was actually the ceramics that impressed me the most; handmade pots and vases had been unearthed from nearly 2000 years ago. Some had been pieced back together like a puzzle while others were perfectly preserved and still had detailed paintings covering them. It was a new museum with heaps of space and the sculptures were all spread out, some just a head the size of a golf ball placed in a display box. There were lots of naked Greek gods showing their ripped bodies, then we’d look down and see a penis the size of a cocktail sausage. They really weren’t well endowed, but it was funny to see one preserved artefact of a set of balls and a minuscule stub with no body attached to it. To be honest, we didn’t really dig the museum. For a person with little knowledge about the history of the Acropolis, it was all quite daunting to take in with so many foreign words to read through. From the museum windows there was a nice view of the Acropolis – the fortified walls visible around the rock. People used to believe that the walls were so massive that they must’ve been built by supernatural creatures of Greek mythology. My favourite part of the museum was a remake of the Acropolis…made from Lego! It even had a dead Lego-man lying in the theatre with little red blobs of Lego to resemble blood around him and spectators watching on. We spent the afternoon wandering around the city centre, through a flea market, eating gyros and ending up at Syntagma Square to watch the changing of the guards. Every hour the guards swap roles and it’s done in a very elaborate way. Tourists were told to stand behind the white line so we did as told and then turned to see three guards stomping our way and had to make a quick dash. All the men were young and extremely tall. Their outfits were just brilliant with thick white tights, bright red hats, long tassels, jackets with pleated skirt extensions and the cutest pompom shoes. They marched in slow motion, raising one leg up to their hips and slowly bringing it back down with a metal tap of their shoe on the concrete. 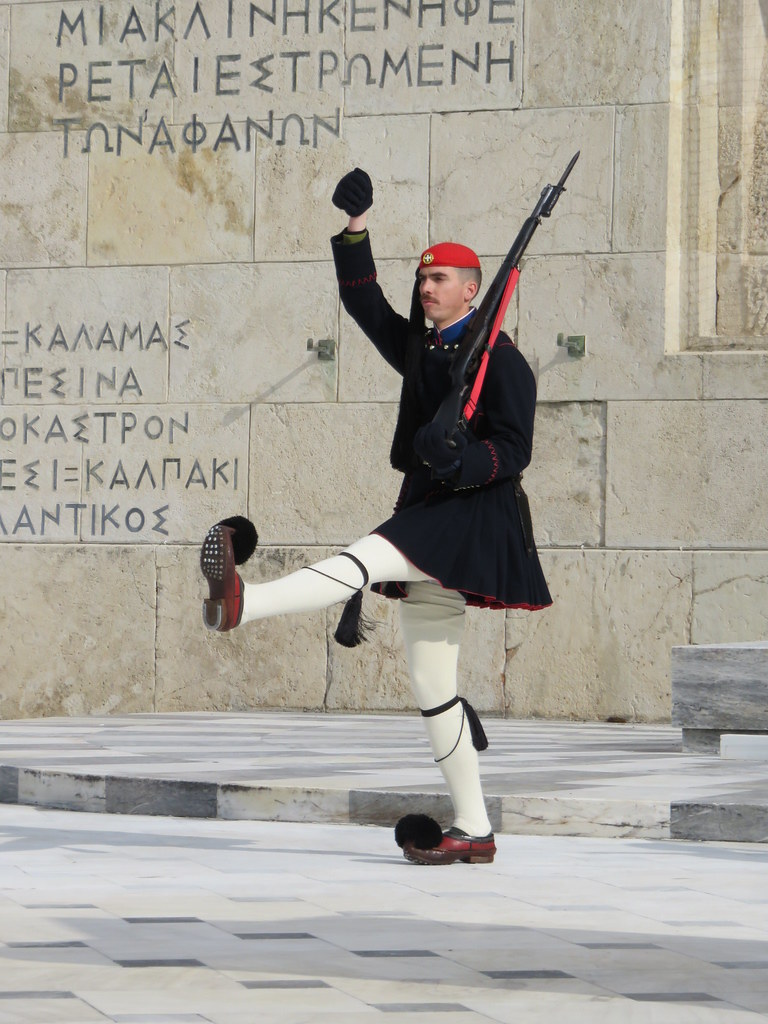 To finish off our city loop we wandered across to The Temple of Olympian Zeus which is said to be one of the largest ones built in the ancient world. We found it much more photogenic than the Acropolis thanks to no scaffolding and blue skies. The pillars were incredibly tall and a collapsed one lay on the floor with all its segments neatly lined up on the grass. 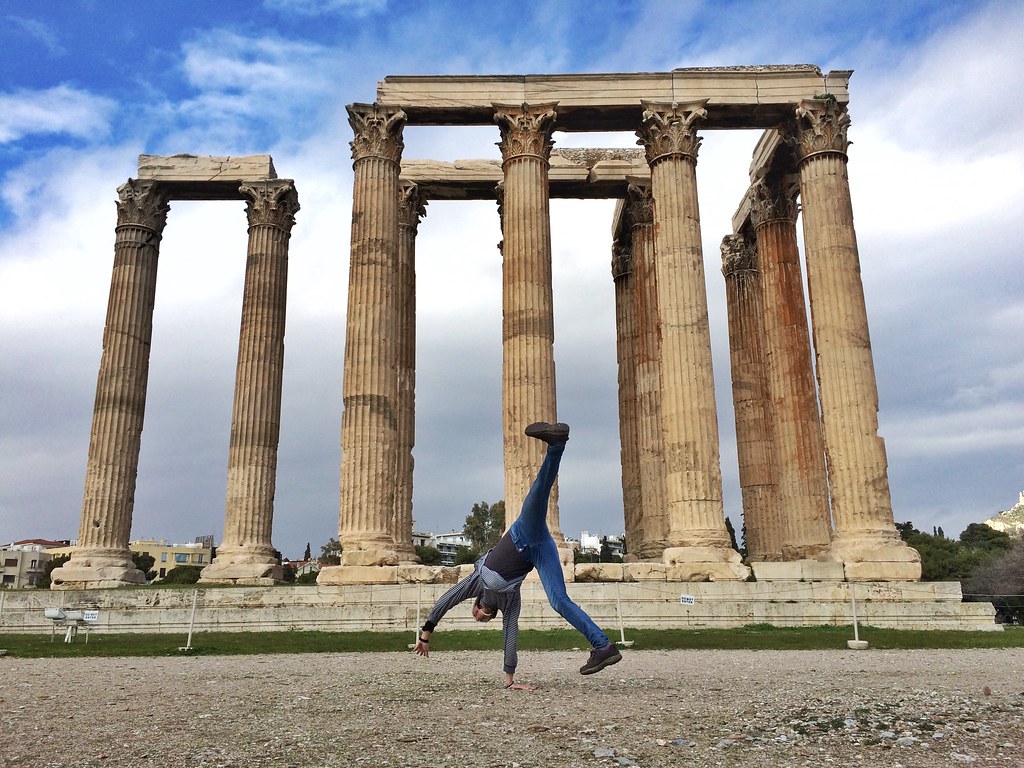 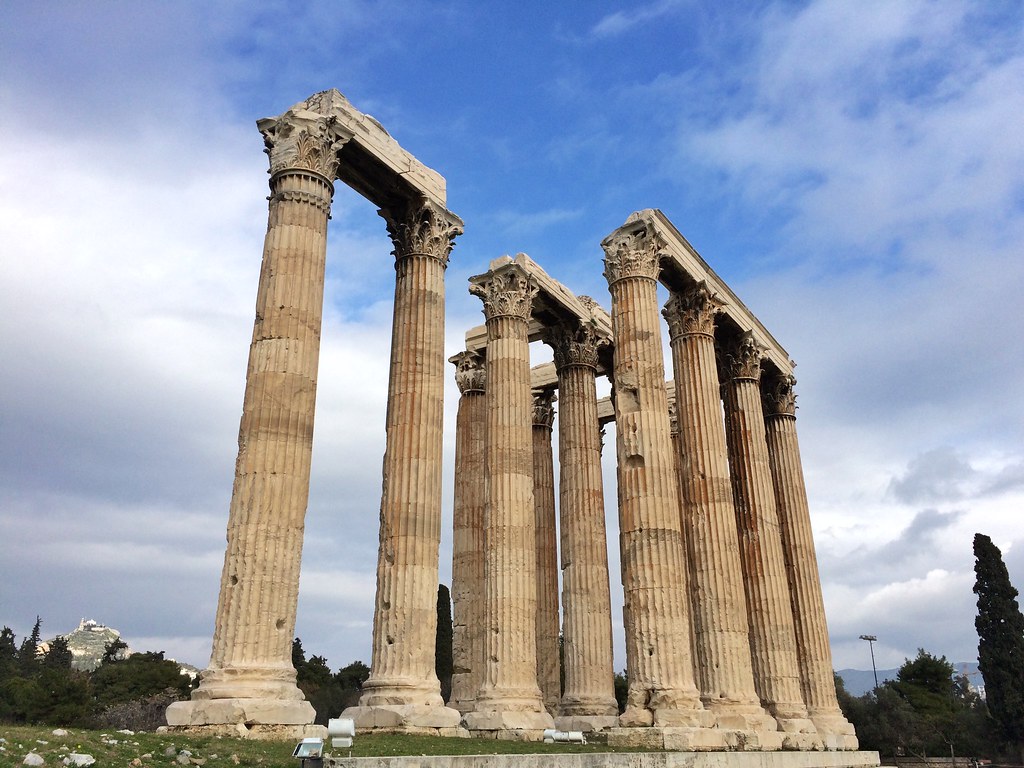 It was then time for us to head back, start packing and get an early night before our long travel day to Morocco. We woke up at 4.30am and then caught a bus to Athens airport, arriving 3 hours ahead of the flight only to be told we couldn’t check our bags in for another hour!! Which was a right pain as that’s never happened before, it was 6am and we were exhausted before the day had even begun. Eventually we flew to Milan Bergamo airport, passing fluffy clouds over Greece and eventually arriving to blue skies and views of the snowy Alps. The airport was terrible for our 8 hour wait, it was small and lacked any nice places to sit or charge our electronics. Then we found that they charged €3 for a trolly which was extortionate. Thankfully Craig found one just lying around so he grabbed it and we could finally give our backs a break. I was excited to eat Italian pizza on our layover but all we could get was a dry, overcooked slice that the worker left in the oven for too long. We decided to go on a little adventure with our new trolly, and head on a 10 minute walk along a highway and through an underpass to reach a big shopping mall. We were getting some funny looks when we tried to push the trolly along the slanted escalator, mainly because I wasn’t strong enough to push it up and blocked the escalator until Craig came back down to help me. We ate more unimpressive pizza and then a coffee before taking the trolly back down the escalator and clinging on for dear life as the brakes stopped working. At 7pm it was finally time to head to our gate and fly to Fez, Morocco for our next big adventure.