Our flight to Fez was an interesting one; Greece to Italy was ever so calm and peaceful while Italy to Morocco was loud and full of commotion. A man was shouting at the flight attendants about him not being allowed THREE hand luggage bags, a baby was screaming in front of us and everyone was talking like they were in a night club – basically shouting. We were definitely the minority on-board with most passengers being Moroccan. There was a sweet little girl sat in front of me who kept peering through the gap of the chairs and smiling at us. I began eating a salad I’d brought in the airport when a tiny hand poked through the gap. It was like a magicians hand, no body to it and doing quite hypnotic twists and turns to the wrist and getting precariously close to my food. Craig and I were in hysterics. The hand would quickly vanish and then out of nowhere it would be back and we were roaring with laughter until the dad told her off and we all had to act like grown-ups.

We landed in Fez to the loudest applause we’ve ever heard on a flight. It was a totally different scene as we exited the airport though; We walked through a crowd of people waiting at arrivals and it was totally silent, it was as if someone had paused time and we just walked through the crowd, through the rainy night to the taxi stand. We didn’t have a guidebook so I felt pretty lost about how to get around and what prices to pay but I had a ball park figure for a taxi and it was exactly what we were quoted, about €15 to the Medina where we were staying. I did try to barter but the chap wasn’t having it so we set off in a very fancy taxi, like a land rover with plush seats and colourful Moroccan carpets on the floor.

Abdul, the driver didn’t speak English so he tried to talk to us in French which didn’t help us much either. He wanted to call our Riad so we gave him the number and he kindly called them so someone would meet us at a carpark. It was pouring with rain now and Abdul was on the phone and blissfully unaware that he was fast approaching a gigantic puddle. It caught us all by surprise actually and a tsunami style wave rose up on either side of us. Abdul gave a little giggle and we all laughed. Thankfully the rain stopped on arrival and a chap also named Abdul was waiting for us. We were lucky to have such a convenient location for our riad. It was in Fez El Bali, the old medina, which is the largest pedestrianised urban area in the world and has 9500 roads!

We only had to go through a couple of small alleys before we arrived at a building without any signs to suggest it was a riad (a riad is a traditional home built around a courtyard and converted into a guesthouse). Abdul opened the dark wooden door and we were led through a hallway of blue and white tiles until it opened up into a jaw dropping courtyard that rose 4 or 5 stories high. It was quite the palace we were staying in!! The floor was made of neat blue and white tiles which also climbed up the grand pillars. There were three gigantic wooden door-ways with drapped red curtains, intricate carvings on the wooden shutters and even on the plastered walls too. Behind two of the doors were beautiful hotel rooms while the other had a traditional Moroccan lounge with a sofa that stretched all around the room. 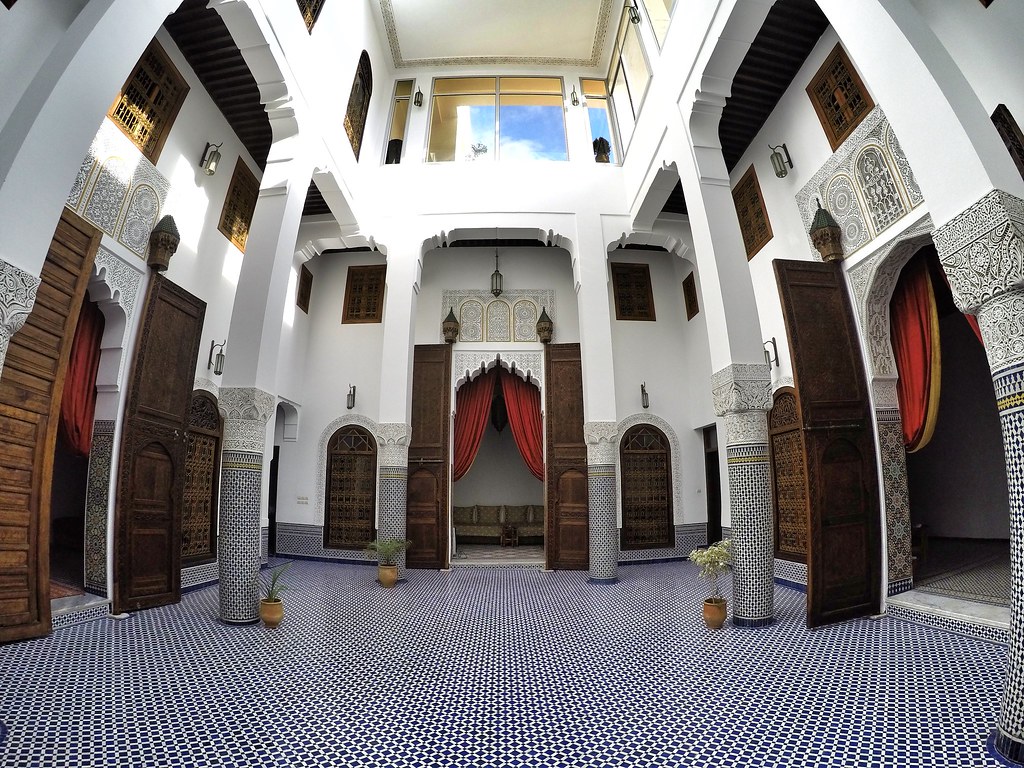 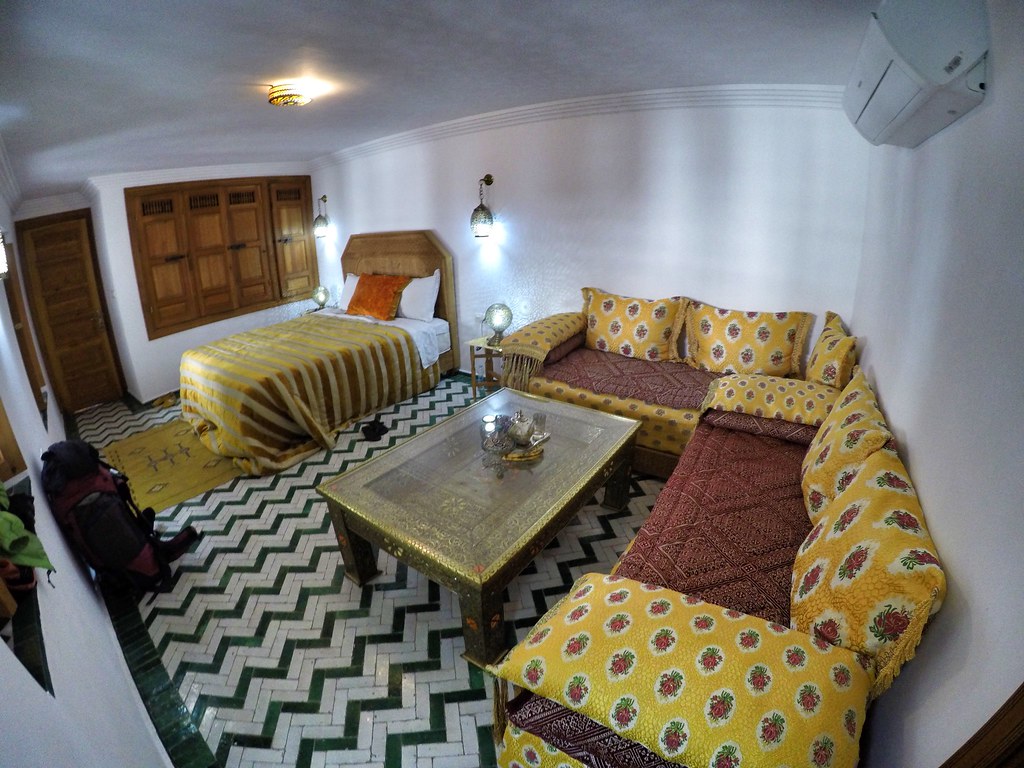 We’d booked the room on booking.com for €40 a night including breakfast. It was way over our budget but a treat for Craigs birthday (how longs is he going to drag his birthday out for?!) and it became even better when we were told they were upgrading us to their best suite worth €80 a night! The tiled theme continued up the steps and then into our grand room where they changed to green and white tiles. It was a gorgeous room with a velvety, orange comforter and our very own Moroccan lounge with a copper and glass table. The bathroom was equally as fancy with green mosaic tiles covering every wall, star shaped lantern and traditional Moroccan soaps. For us backpackers and van dwellers it was quite a luxury! Mohammed the other worker brought us some delicious spiced, mint tea, served in a shiny silver pot. He poured it in true Moroccan style – about a meter above the glass. We laughed when he left the room because the polished table was left splattered in sugary tea. 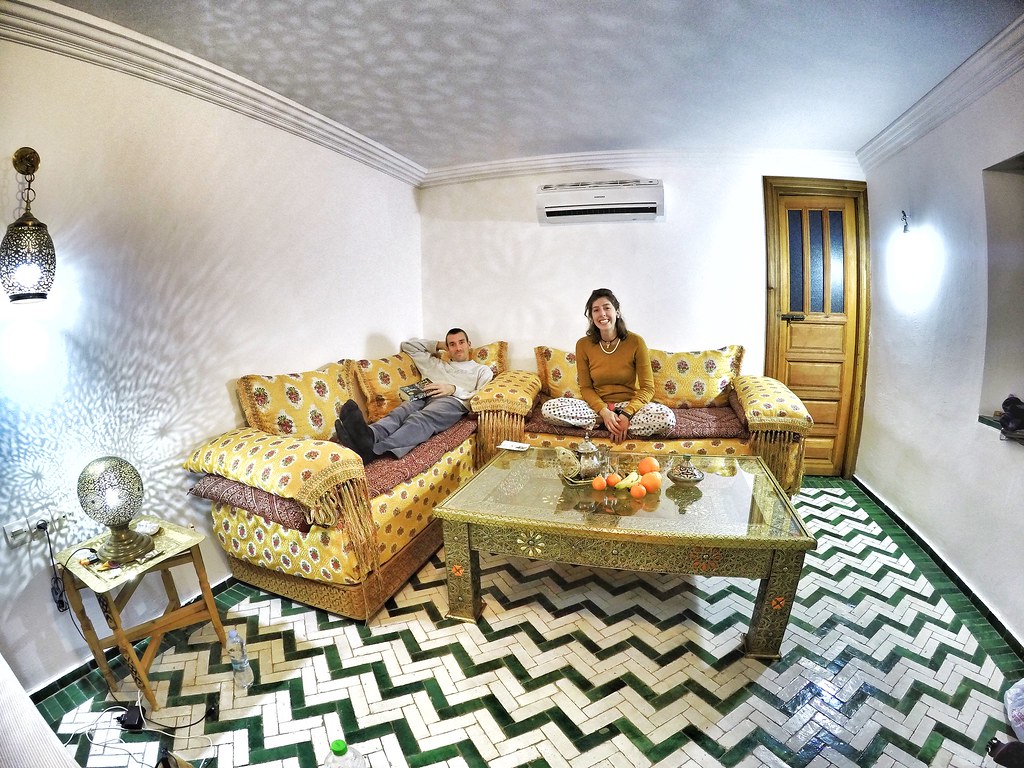 We woke the next morning, slightly fresher after the gruelling day of travel yesterday and wandered across the opposite side of the riad to the dining room. We sat beside a large stain-glass window and were served flakey pancakes, doughnuts, bread, omelet, coffee, freshly squeezed orange juice, jams, soft cheese and a yogurt. Everything was served on the most beautiful ceramic plates covered in arabic writing. I was a happy bunny. 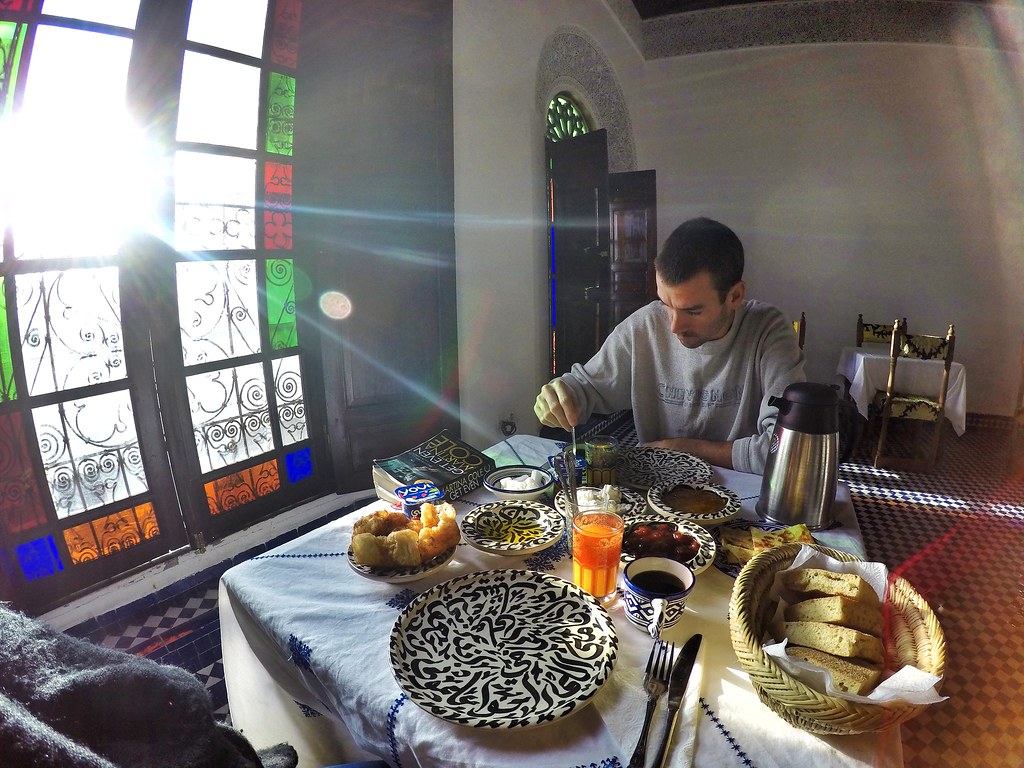 We were staying within the old medina but in a very quiet, residential area so we were excited to explore the busy souqs (markets). A short walk led us to the nearest main gate and we entered a large square adorned with green and red flags. All the buildings were beige with flat roofs. The locals looked fabulous; men wore gowns with pointed hoods while women had colourful gowns and head scarfs. We darted off into a random alley and wound up in a busy area full of tiny shops, people and donkeys. There was meat hanging on hooks, including the furry head of a camel and dried goats heads. The olive stands were full of colour and they looked so appealing as they glistened in the sun. We ended up in the copper making square where men were cutting, hammering and polishing the copper – and making a right racket too. A sign suggested that it was an ‘orchestra of sound’ I wouldn’t quite call it that but it was an interesting sight. Various alleys led off from the square so we just followed the crowds unsure of where we were heading. The souqs were full of life and really exciting to walk through. Cats called the the alleys home, especially around the many meat stalls but also just on items for sale like cushions or fabric. 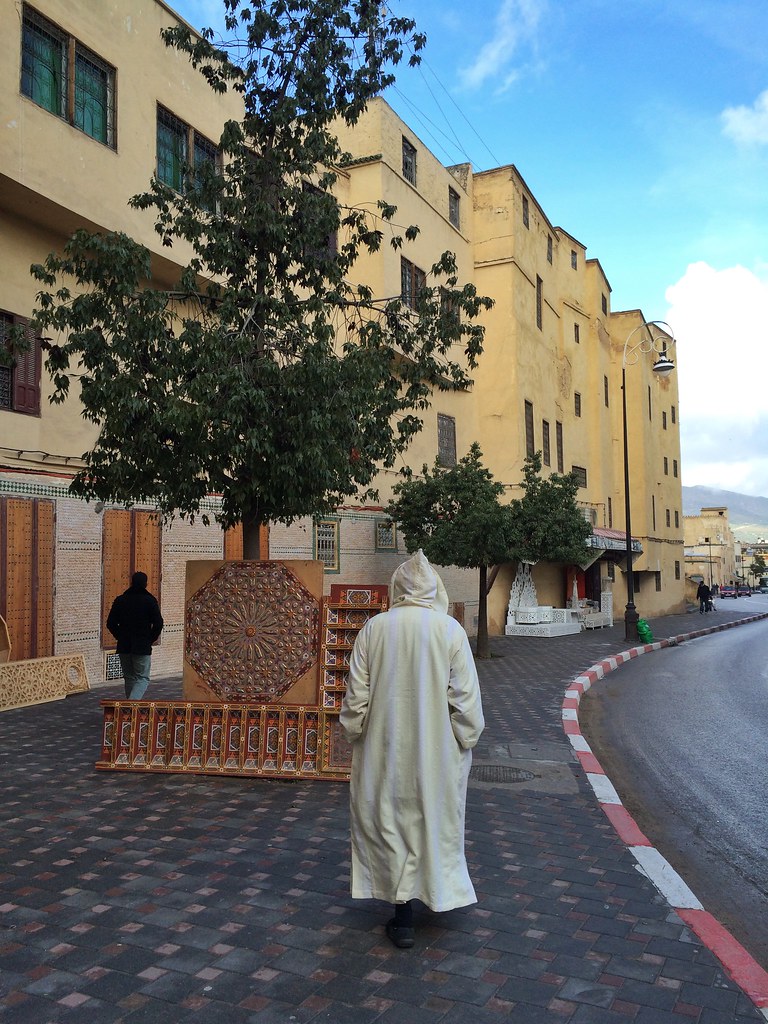 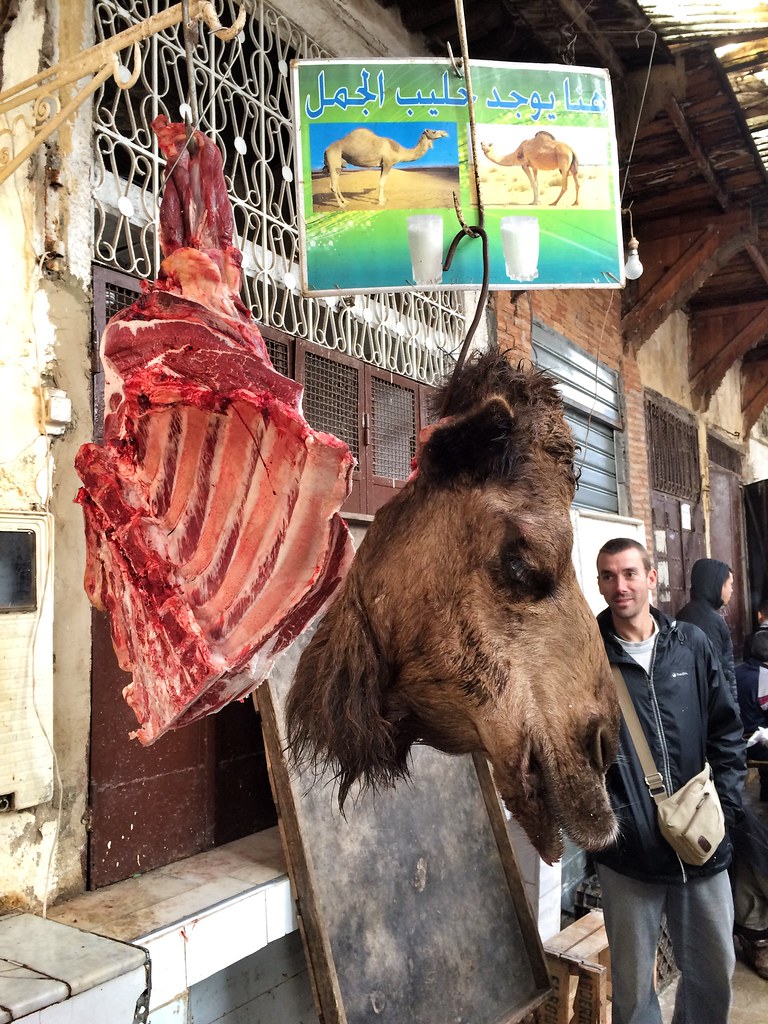 We were surprised that hardly anyone bothered us though, very few shop keepers called us in or hassled us. We also felt very safe wandering through the souqs, there was a nice vibe to the place. We keep comparing Morocco with India, I don’t know why, maybe because India was the last place we had a big culture shock. I visited Morocco when I was younger and I remember the men being quite pervy, but now they weren’t even taking any notice of me. Maybe because I’m with a guy, or maybe it’s because we’ve experienced India which has the most intense, persistent staring in the world, so it makes everywhere else seems so easy. Kids didn’t bother us, crowd us or poke us like they did in India, they either ignored us or gave us a polite bonjour. 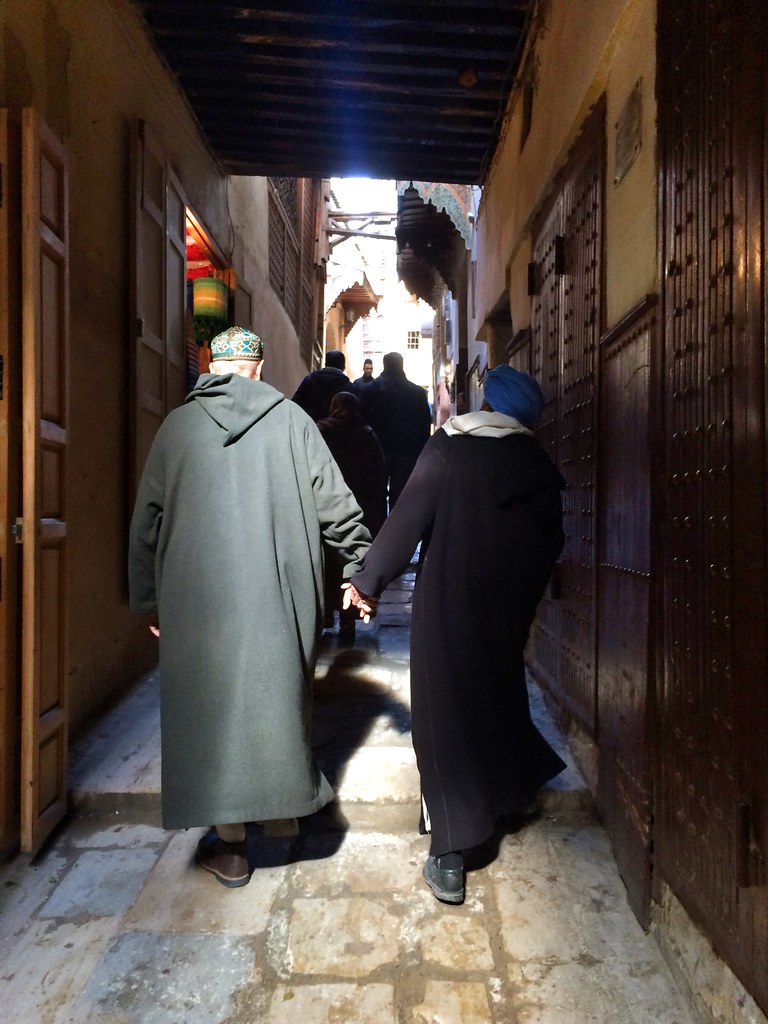 We stopped for coffee in a rather rustic little coffeeshop and we noticed that they didn’t even clean the glasses. People helped themselves to water and just put the glasses back where they found them. And we also noticed that they share drinks. One glass of coffee or tea might be passed around a few men who take such teeny tiny sips. The medina is actually full of beautiful mosaic water fountains, some even have a cup on a string so you can help yourself to water. 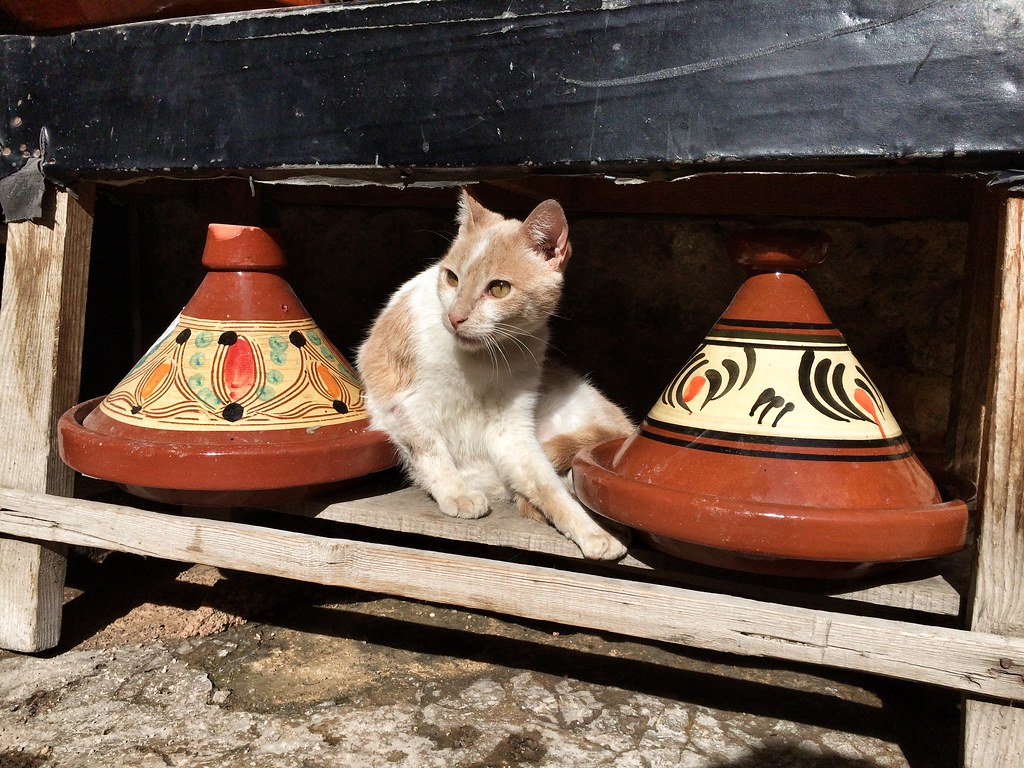 I had a list of places I wanted to visit and we managed to find them all without a map or any idea of where we were. We ended up walking alongside a stunning wall decorated in mosaics and elaborate doorways. The colourful walls led us to the Kairaouine Mosque & University, which is one of the biggest Mosques in Africa and the oldest university in the world! It can accommodate up to 20,000 people at prayer. We weren’t allowed in as non-Muslims but we could peak through the doorway and see the intricate designed building. We also stumbled across the Nejjarine Musuem of Wooden Arts & Crafts which was in a stunning building that has been heavily restored after police used it for years and let it get dilapidated. There were big wooden balconies skirting around every level. Items made from wood were displayed in the rooms., showcasing fancy baby carriers, carved shelves, basic utensils and more. The roof terrace must’ve been about 5 stories high and we enjoyed a delicious mint tea up there served by a very jolly lady in a dentist style coat. 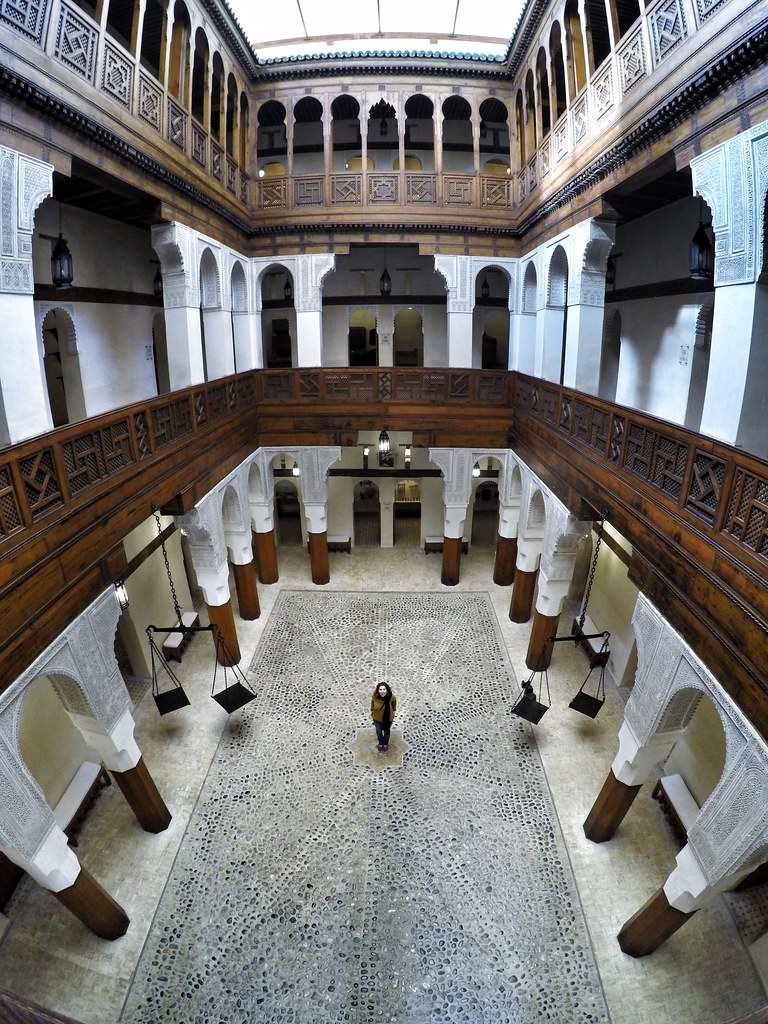 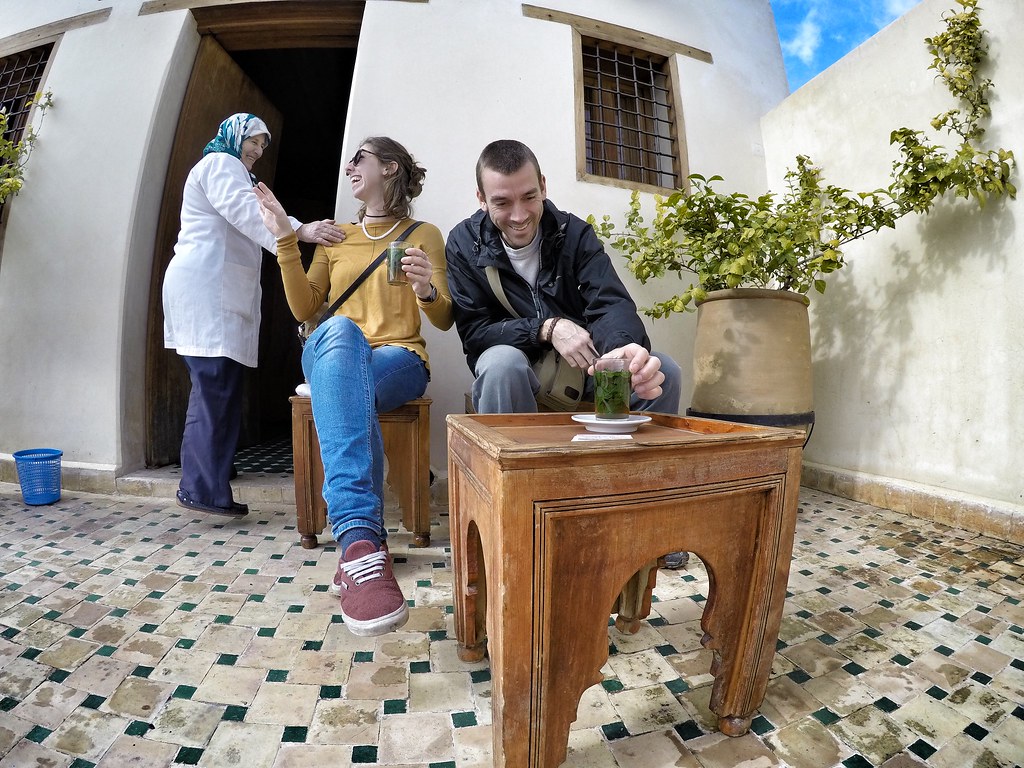 We found more beautiful buildings to explore and doorways to photograph before we worked up an appetite and found a street stall selling a perfect lunch for us; a baguette filled with soft cheese, boiled egg and the most tender chickpeas we’ve ever tried. Another stall sold tasty savoury pancakes covered with cheese for about 30p. Desert was a bag of nougat from a seller covered in bee stings. The nougat stalls were thriving with bees and if any nougat was open hundreds of the nectar lovers would turn the colourful treats black. We spent a few days in Fez so I’ll explain more in the next post, including a very interesting visit to a traditional hammam. 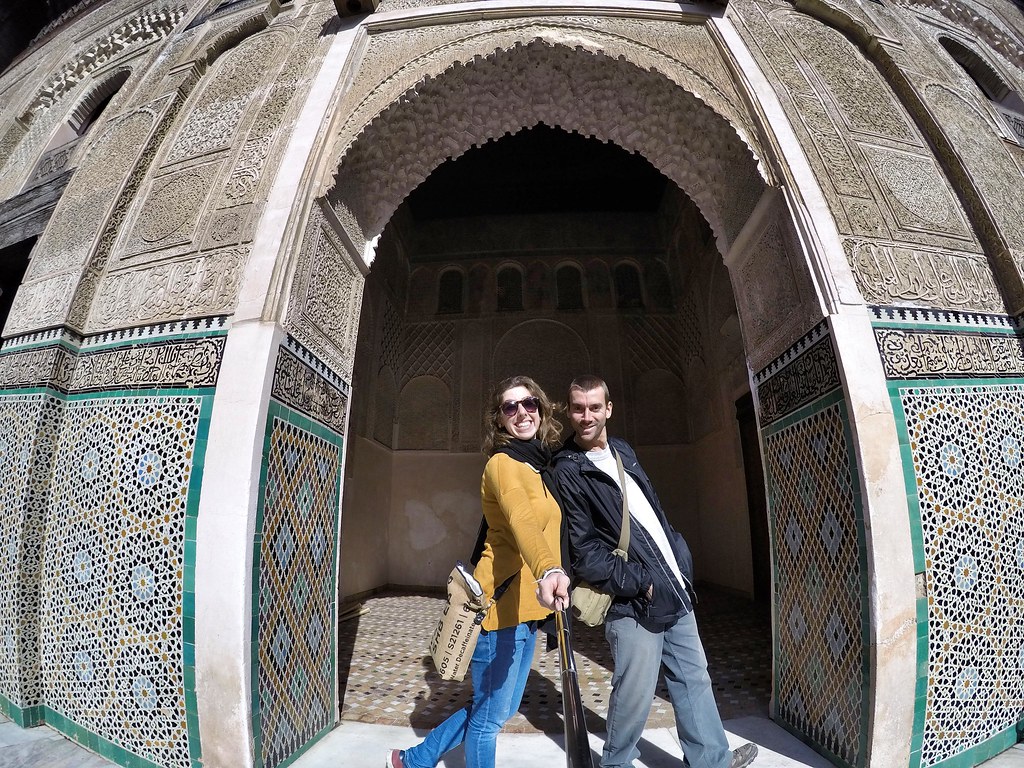 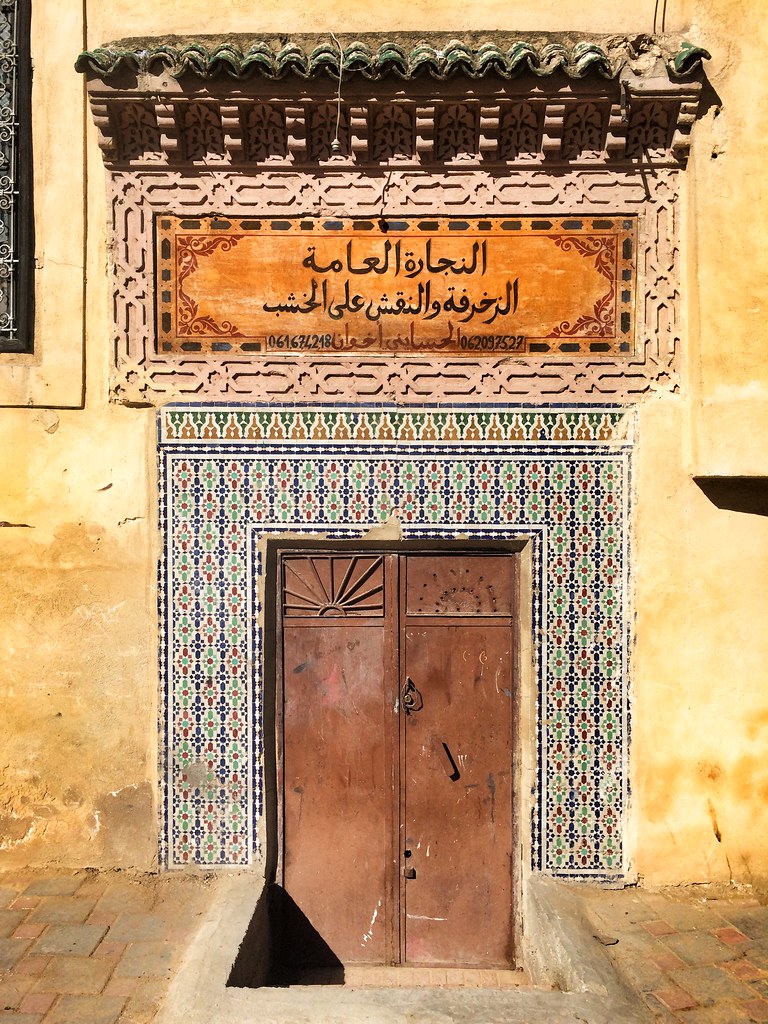