After nearly two months living on a Greek island it was time for our next adventure. We were leaving the small, peaceful village of Glossa and heading to crazy, busy Morocco. We had a lovely time living on the island but the last few weeks were pretty poor weather and we’ll be happy to get some desert sunshine on our skin and a change of culture.

We set off on a rainy afternoon and caught a ferry to Mantoudi. The sea was rough at times and I was feeling extremely wheezy as the ferry tilted left and right causing the window view to change from just grey sky to inky water. Once we arrived at Evia Island we hopped on a bus bound for Athens. Shortly after leaving we were stopped by police who came on board and did a checklist of the passengers, just like teachers do at the start of a lesson. They didn’t call our names out though, which was a shame as they’d misspelt them on our tickets and I was excited about answering to our new Greek names of “Lavren and Crai”.

Evia was a very rural island, with big trees, green grass and forested hills. It looked quite like England at times and it was bizarre seeing a long stretch of flat farmers fields after only seeing hills on Skopelos. A milky river gushed alongside the road as we drove through a gorge. Then we climbed up and down the mountains where dense fog drifted past us and a few feet of snow remained along the roadside.

The bus pulled up in a shit-hole of an area in Athens. I went to use the loo and found a blocked squatter so gave that a miss. We had to find some wifi to book our accommodation which I was getting worried about as it was already 8pm. Thankfully I found a gem of a place on Airbnb; a modern studio apartment right round the corner from Acropolis for £25. The host was called Fani, so Craig wrote a message asking if she had availability and didn’t add any politeness to the message so I told him to say ‘Hi Fani’ first and I looked down just before he sent it and saw he’d written ‘Hi Fanny’!! After an interesting dinner in a local taverna (I literally ate just a bowl of baked beans) we set off on the metro.

We arrived in a much nicer part of the city where the Acropolis was lit up and we followed a lovely pedestrianised area past little restaurants, bars and cafes. Two workers sparked up conversation with us, trying to entice us in with wine and food but obviously, we’d just filled up on beans so they handed us business cards to come back tomorrow. We walked a couple meters down the path and a man blocked our way. He held out a business card in each hand and said “I am always second, please just take the cards”. After the third business card the humour factor wore off and we took a different route to avoid them.

The next day was Craigs 34th birthday so we headed out to the local bakery to get some fresh patisseries. The selection was incredible, so many varieties of breads, cakes, biscuits, baklava and croissants – we were in heaven. Even the little corner shop had so much variety compared to what there was on Glossa.

Sadly the Greek weather still wasn’t playing game but we continued as planned and wandered up to the Acropolis. The Acropolis is an ancient citadel and a must visit for any trip to Athens. The fortified civilisation was built on a rocky hill with a plateaued top. As it was the off season the ticket price was half the normal rate, hooray! 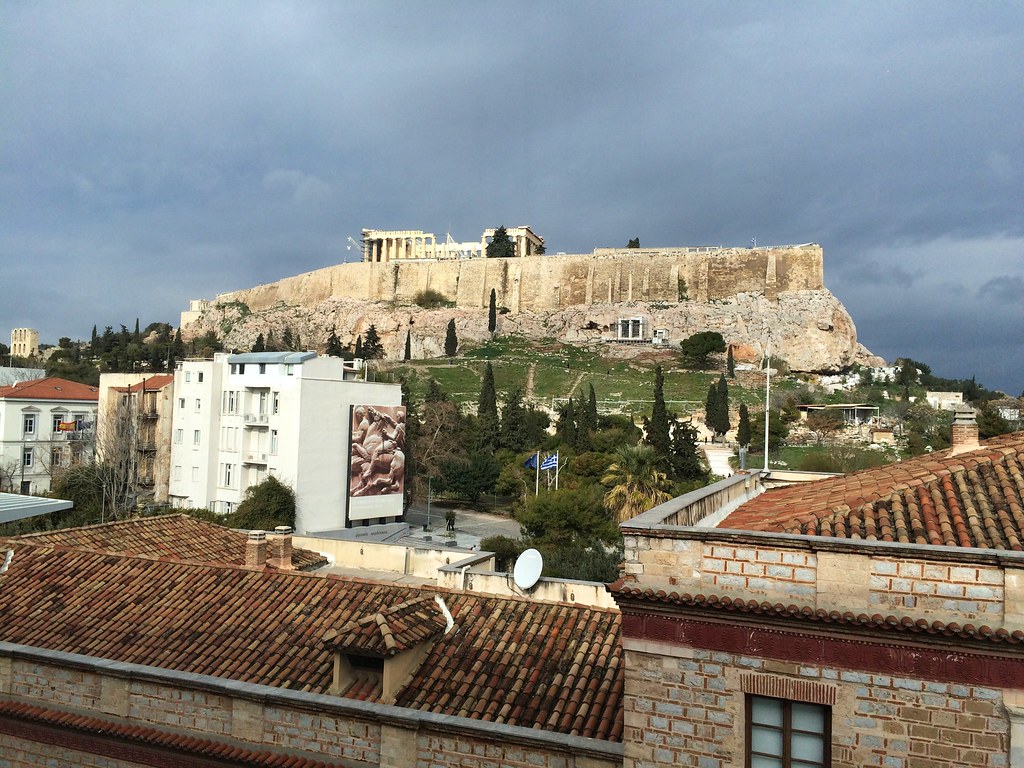 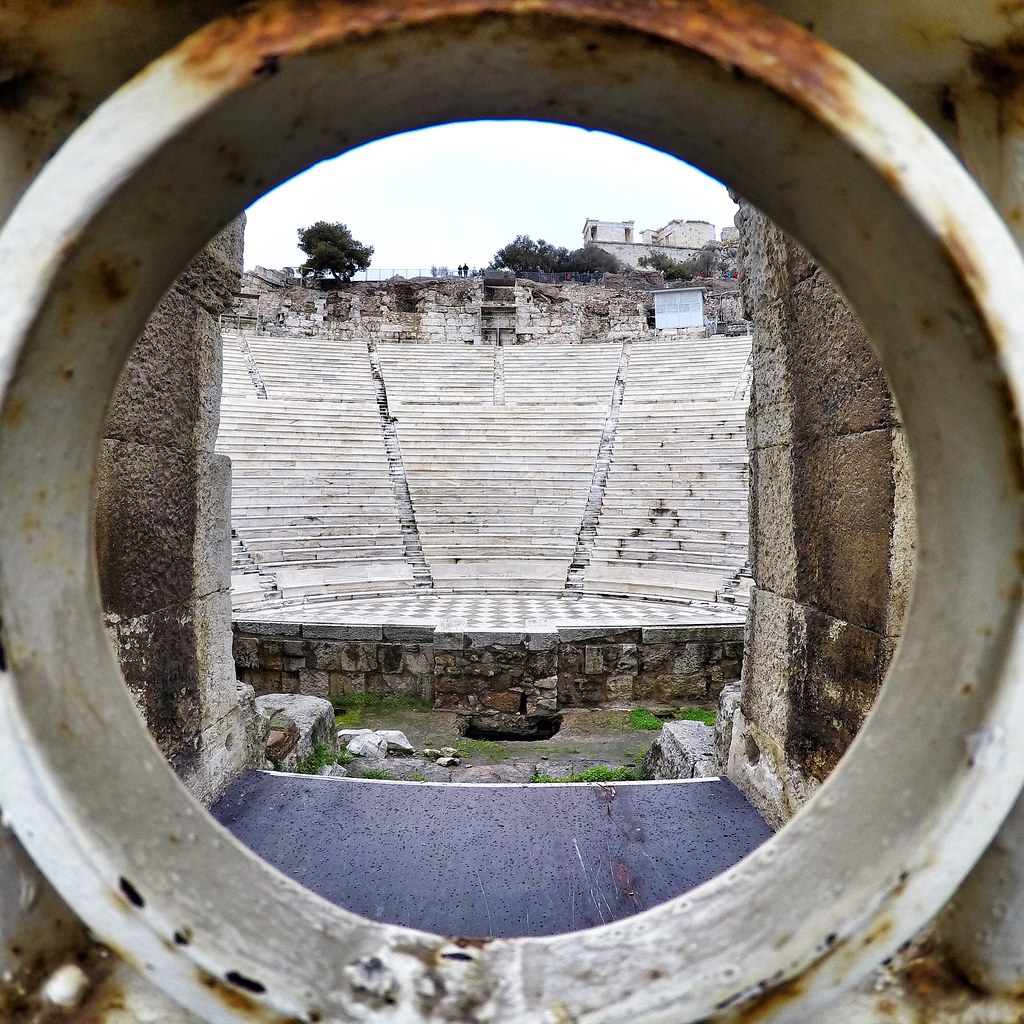 To be honest I’m not all that interested in history. Craig is, but I’m much more content reading the life cycle of a humpback whale than the materials used to make statues. A big amphitheatre lay below us with enough space to seat 5000 people. The main attraction of the Acropolis was the former temple of the Parthenon. The construction of it began in 447 BC at the peak of the empires power. It didn’t look quite how we’d imagined though, and was covered in scaffolding and being heavily renovated. Other buildings nearby were in better condition with pristine pillars climbing towards the sky. One porch was supported with large female statues which was quite beautiful and crazy to think that even those intricate statues are still standing nearly 2000 years on. 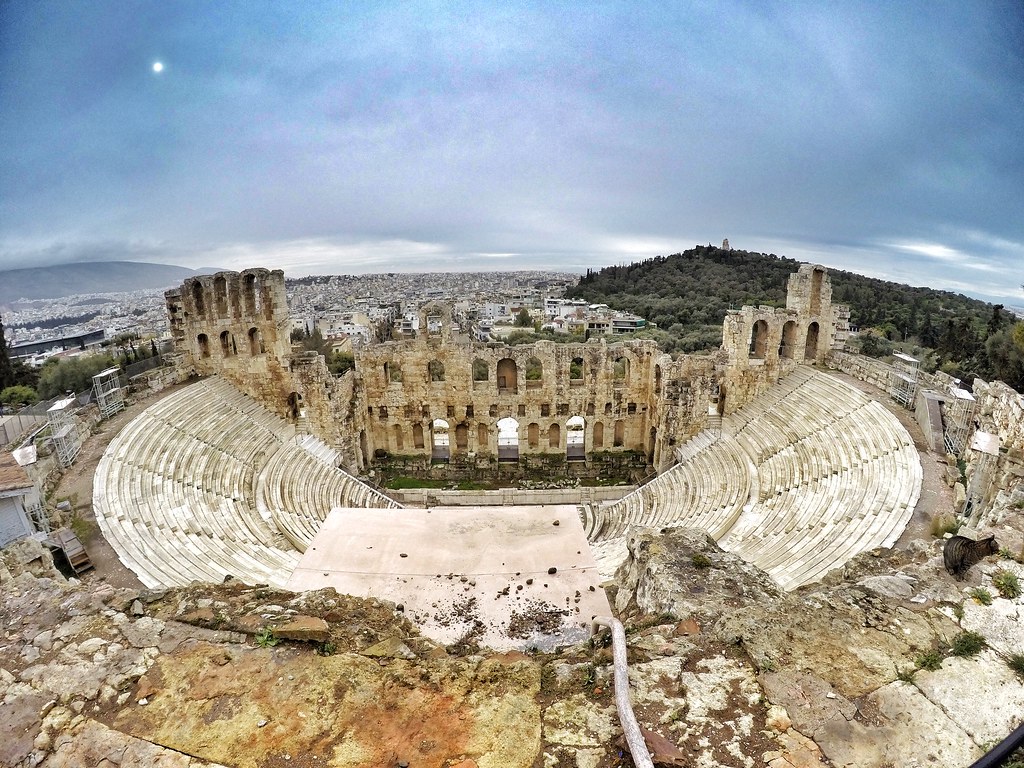 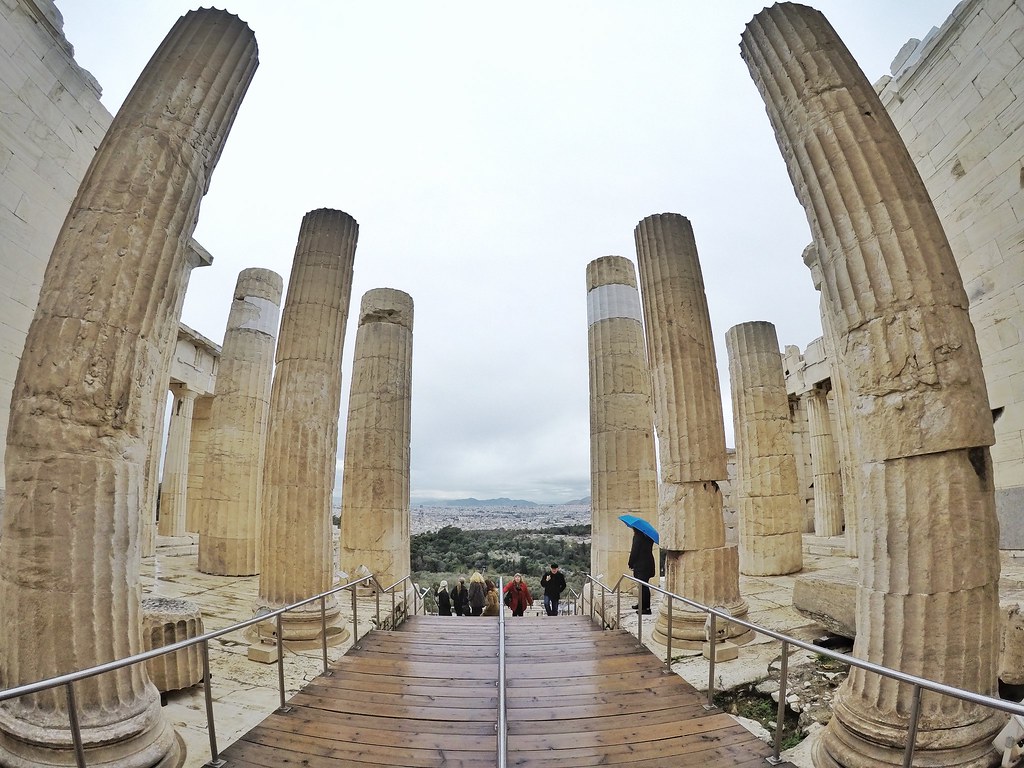 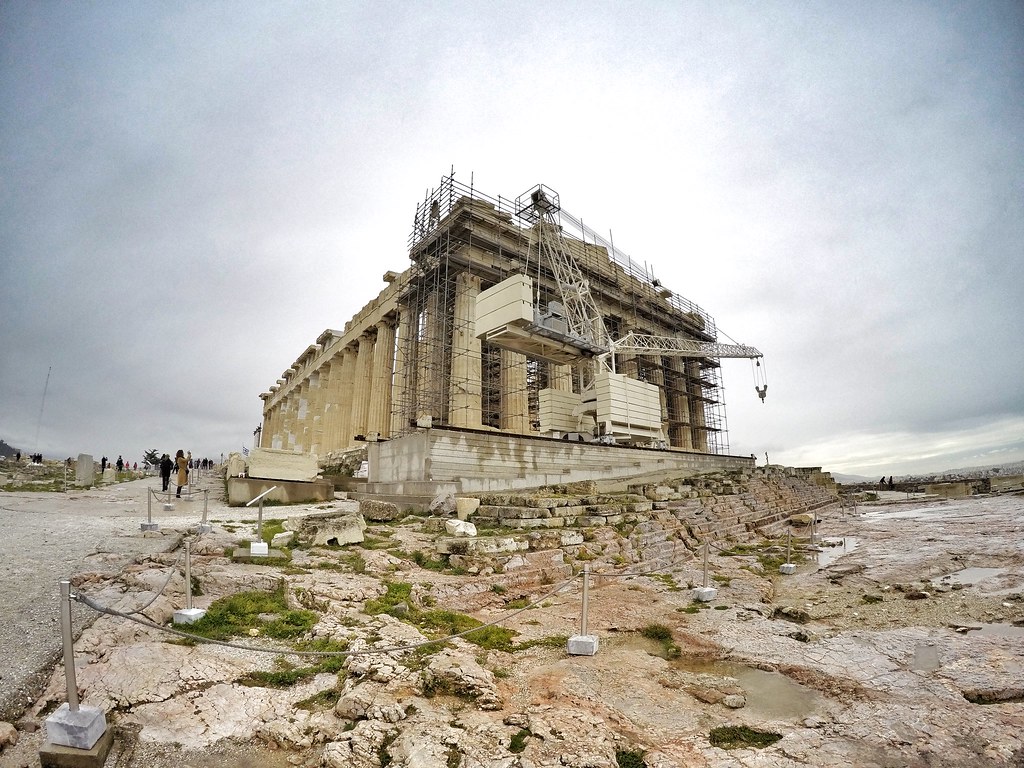 It started raining quite heavily so after taking some photos and pondering how on earth humans lifted such heavy rocks we set off for some coffee and cake. I found a family run restaurant with good reviews for Craigs birthday dinner and it was really close to our Airbnb. We sat outside as inside was full but a heater just about kept our torsos warm. We’d decided what we were going to eat when the owner came out and excitedly shook our hands. It was hilarious because it happened to be the first pestery man who gave us a business card last night. We had no idea we’d come back to the same restaurant but he probably thought we’d stuck to our word and come along as promised. He took the menus off us and didn’t let us order, instead he said he’d feed us like kings and queens for €10 each so we just smiled and nodded. He really did though, we had the best pita in Greece, homemade, warm, doughy and sprinkled with salt and herbs. It was served with tzatziki a Greek salad and followed up with a moussaka each (vegetarian for me of course) and courgette fritters. We were absolutely stuffed, and Craig had ordered a litre of the owners homemade wine from his family vineyard to swish it down with. I don’t like wine but this stuff was actually rather easy to sip. We’re not big drinkers so a litre was quite a bit for Craig to drink on his own but he opted for it because it was ‘better value’. Once he was on his final glass the owner came out with half a litre of wine and cake on the house for us. It was very sweet of him, but the wine was quite a daunting sight. The heater actually ran out of gas so as the evening went on we went from casually dressed to wearing hats, gloves and scarves. Craig gradually became drunker and I reluctantly forced half a glass of wine down me to save him having to drink so much. The bill came to just €34 which was so cheap for what we got, and it was only €8 for 2 litres of Greek wine. Happy birthday Craig! 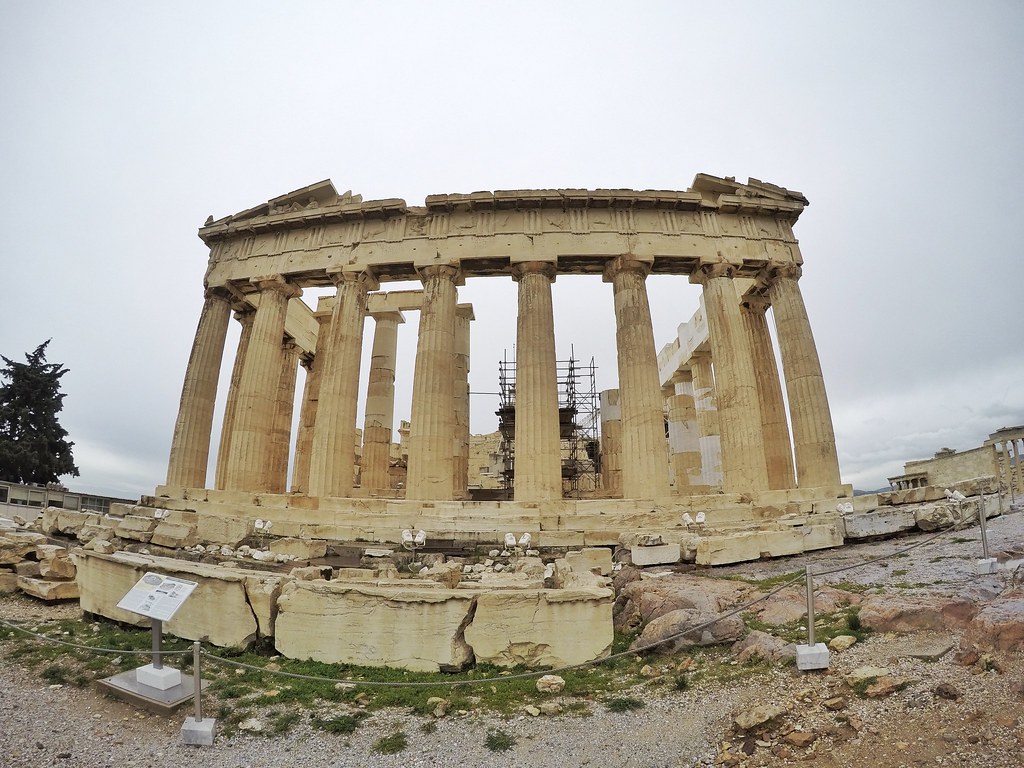 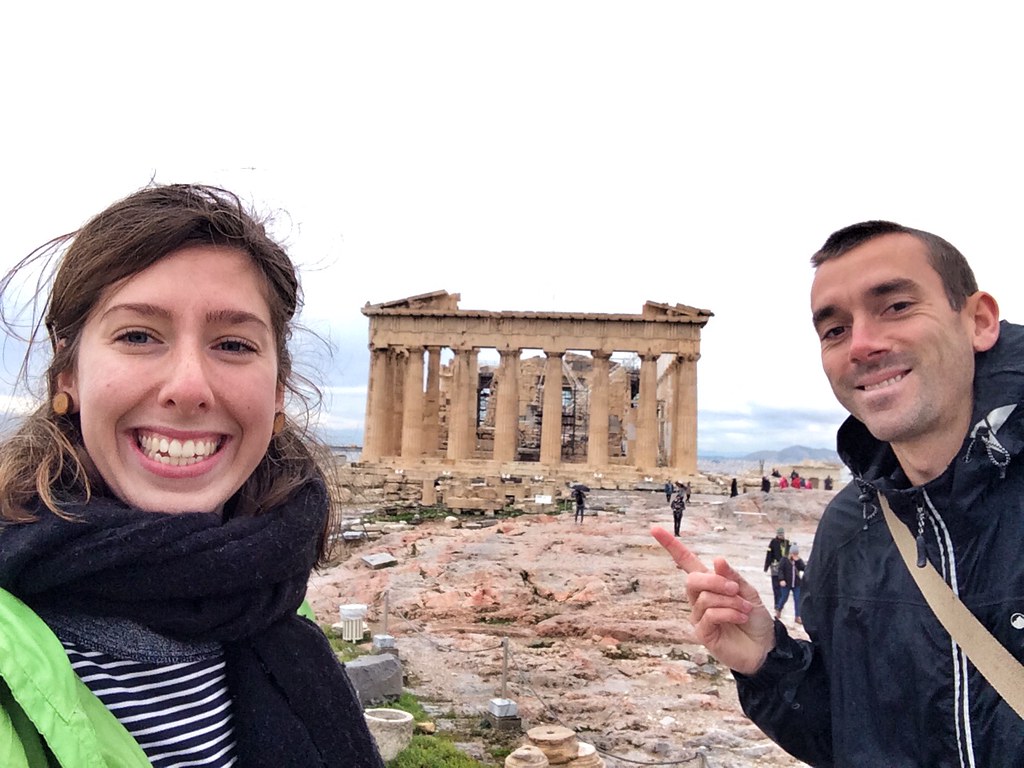 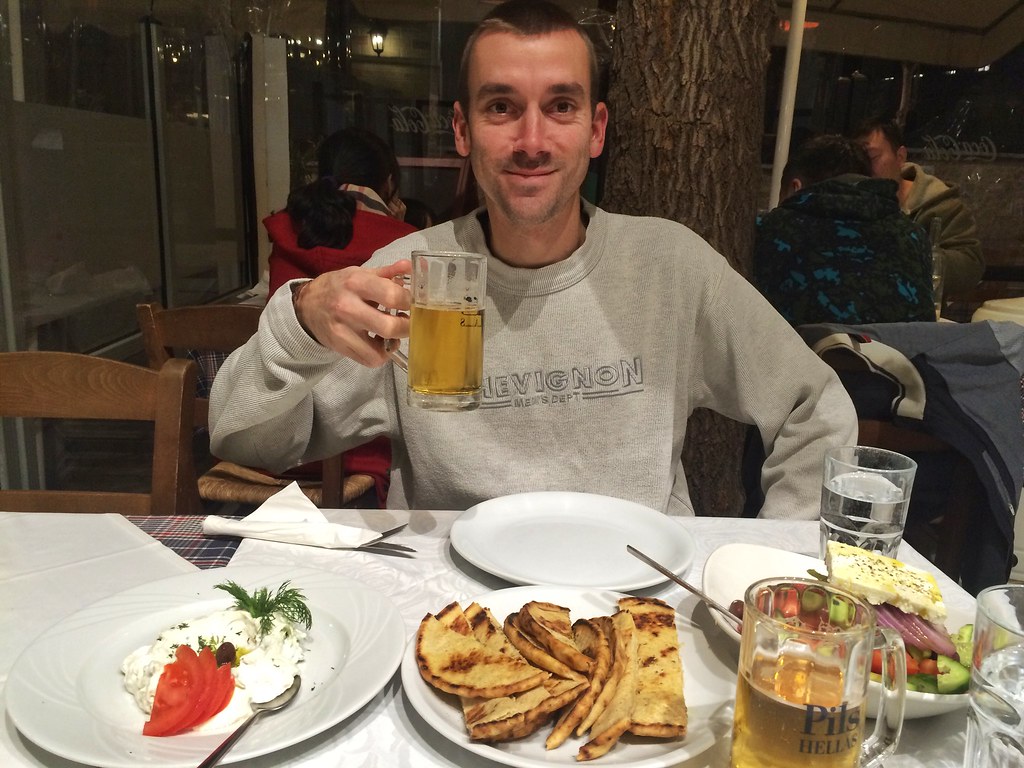