It was a cool, calm morning on Skopelos Island and a perfect one for a day of exploration. We hopped into the jeep and navigated down what might be considered one of the steepest roads in the world. There seems to be no limit to the steepness of Greek roads, they’re practically vertical and by carving lines across the concrete they think cars won’t have a problem getting up or down them. We were lucky to be driving a 4wd car, but most of the locals on Skopelos have 2wd and are prone to wheel-spinning.

Once we were on the main road, which was empty of other cars, we soon found that the un-marked tight bends were covered in ice and after slipping around the first bend we crawled along at a snail pace to be safe. We stopped at a beach 10 minutes south and suddenly it dawned on me that the shops in Skopelos town (our end goal) may be closed as it was the Monday after New Years. We really wanted to buy some English cheddar which they don’t sell in our little village, so we figured it wasn’t worth driving that far and coming back empty handed – serious cheese cravings going on.

We decided to head back and explore the northern chunk of the island instead. A winding road, shaded from the sun and again covered in glistening ice led us across the island to Perivoliou Beach. The beach was beautiful, a big curved bay with rocky edges and the clearest of sea. A man was at the beach kitted out in a wetsuit, ready to brave the cool water and go spear fishing. The beach itself wasn’t a standout and was covered in spongy seaweed but the setting was beautiful. 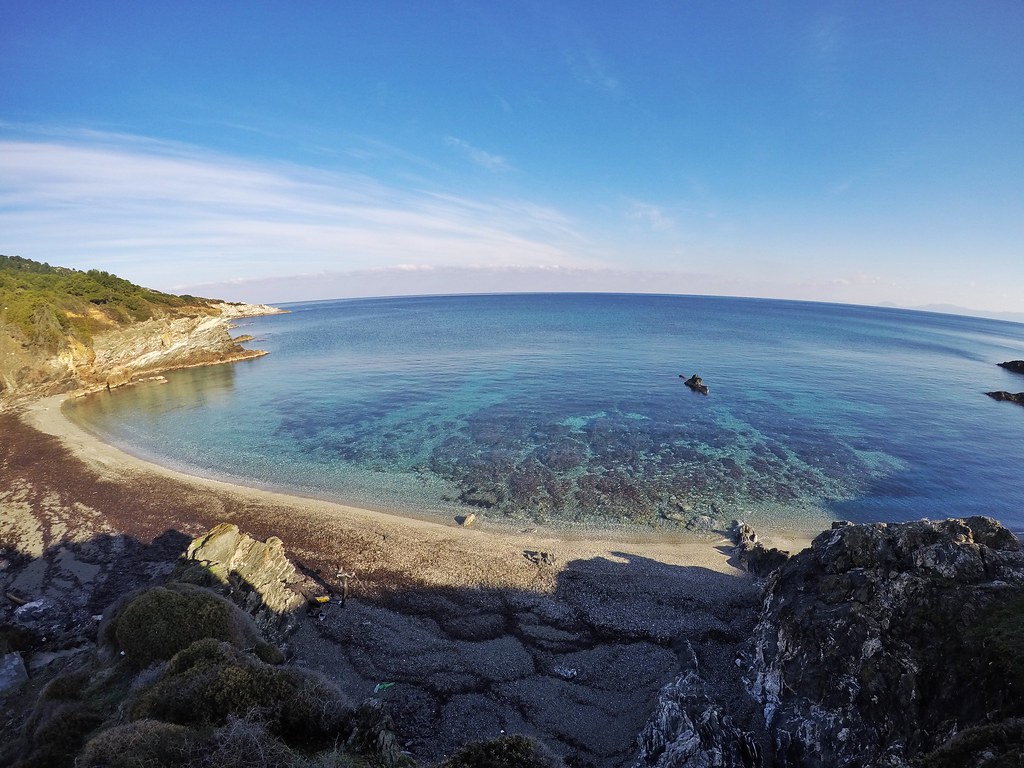 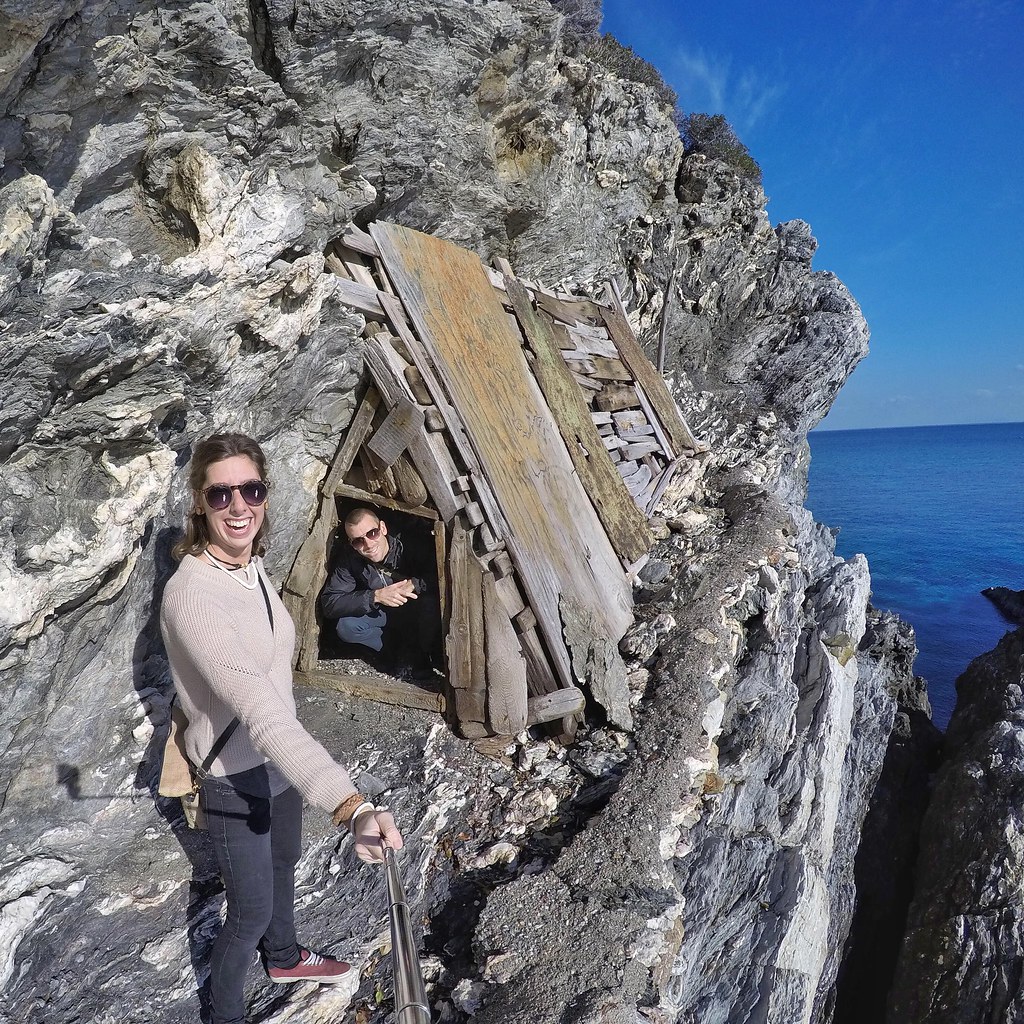 We managed to avoid sinking in the squidgy seaweed and reached the far end of the beach where we found a makeshift wooden hut built into the cliff-edge. We followed the rock ledge up to the house and wandered why it was there, has somebody lived here? Is it for locals to seek refuge in bad weather by the sea? Who knows, but the view from the ‘house’ was pretty jaw-dropping. We continued up the ledge which involved a little rock climbing until we were right at the end, standing on quite a precipice. The sea looked incredible with the height advantage. The water was twinkling like pure mineral water and all the rocks deep below the surface were visible. 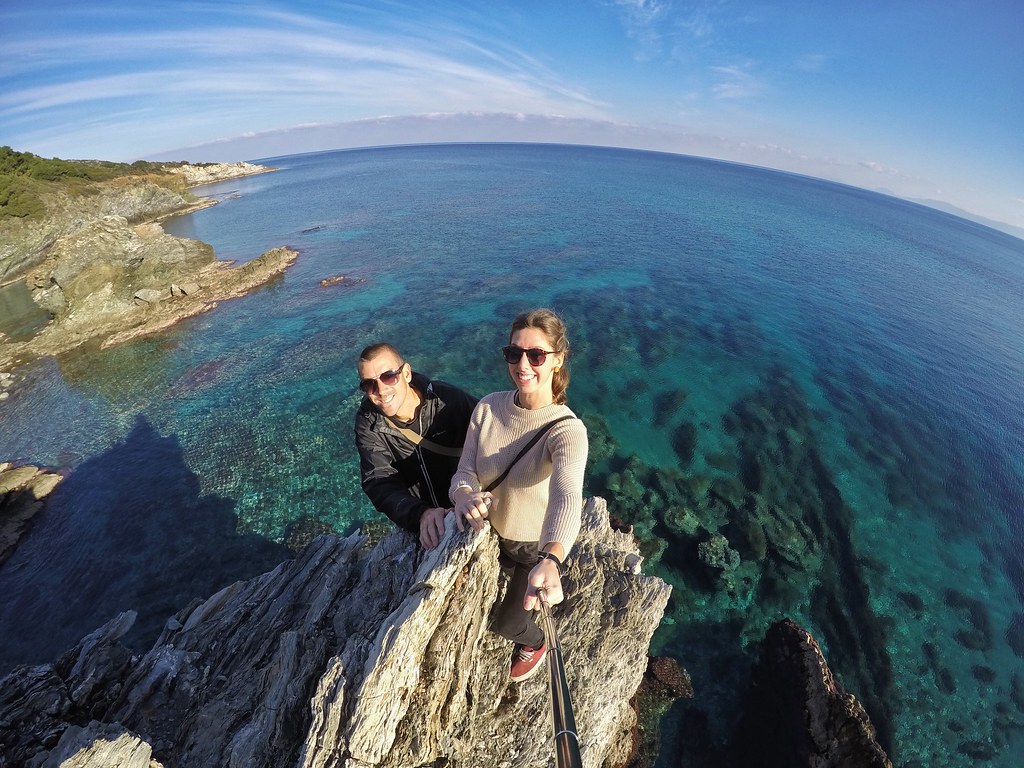 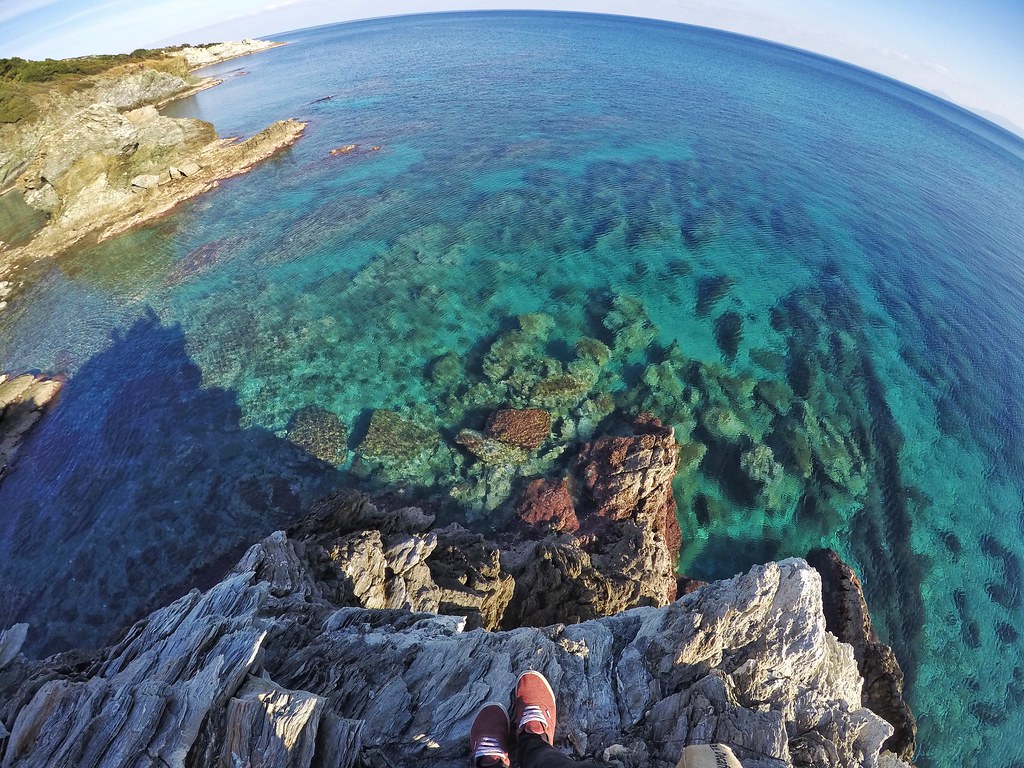 On our way back we decided to take a different route and veered onto a dirt track. It was a really fun ride with rocks and big muddy puddles to negotiate. We ended up driving high up above the sea on a cliff edge with a stunning view of the layered, forested hills of the island. 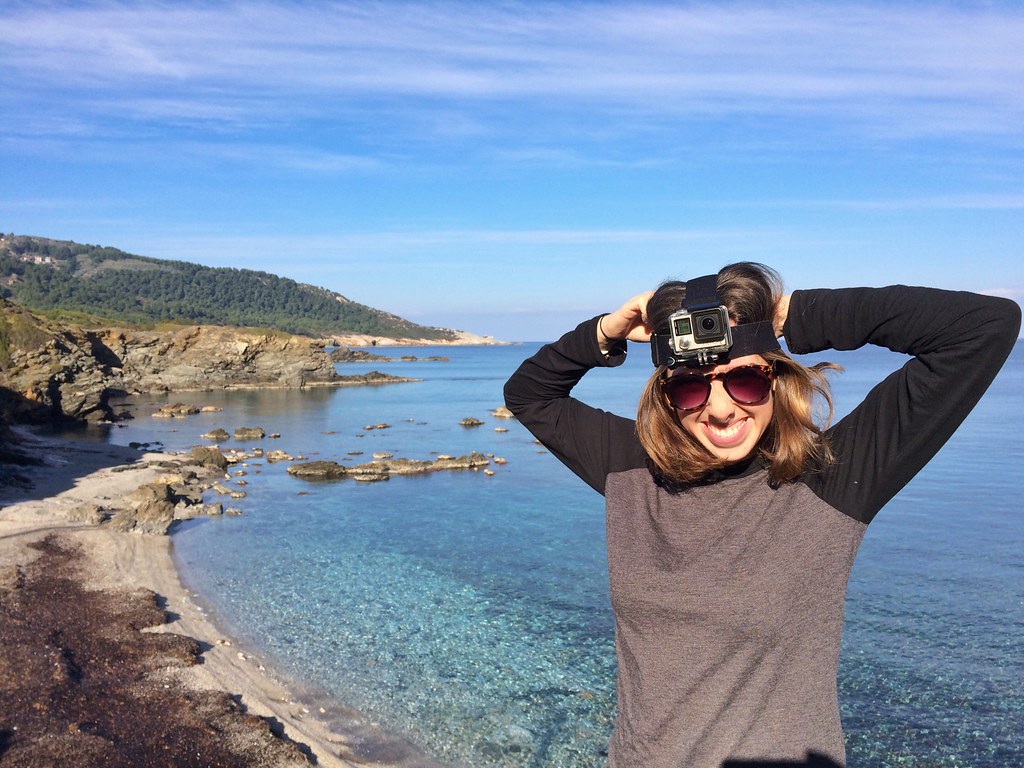 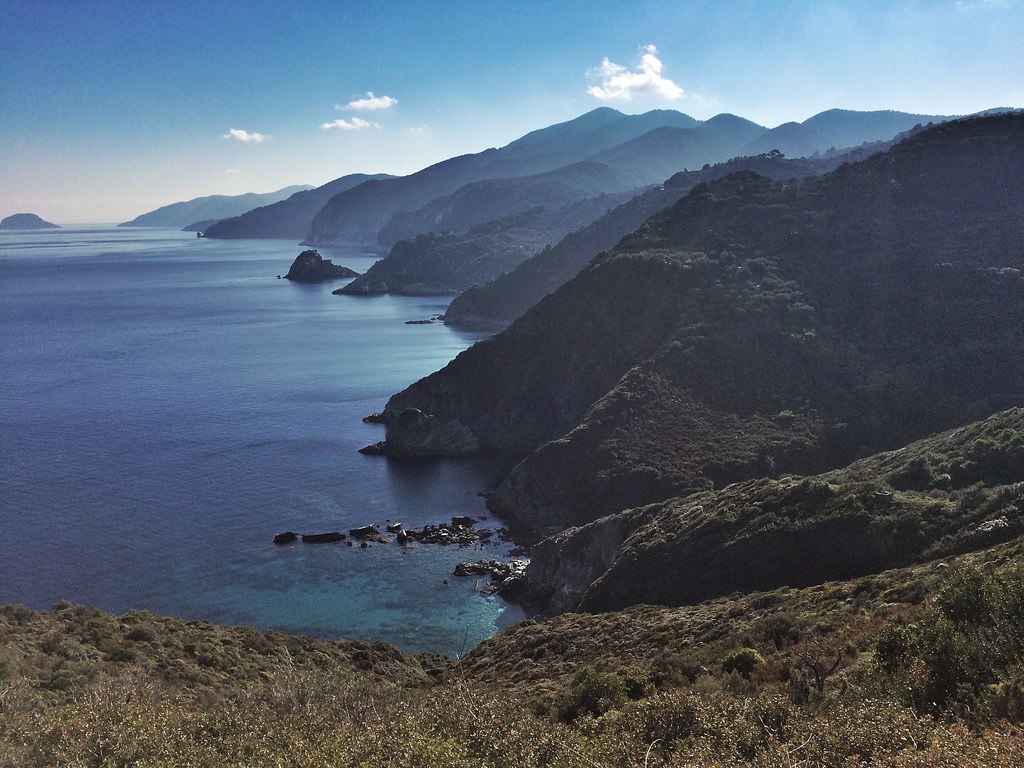 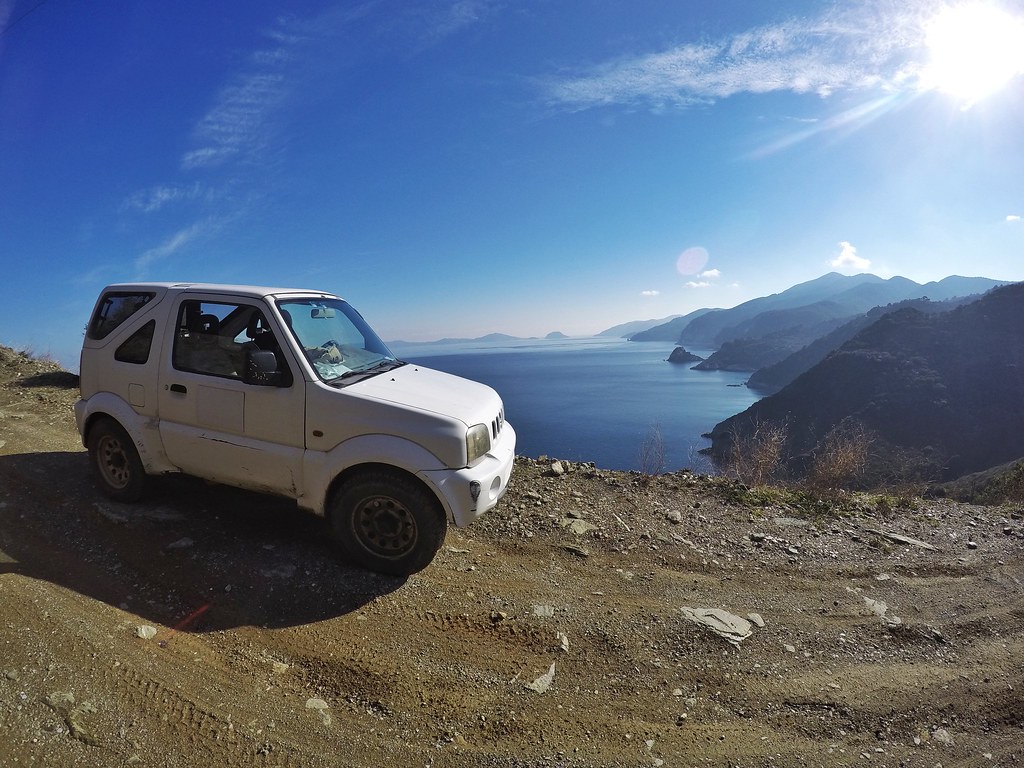 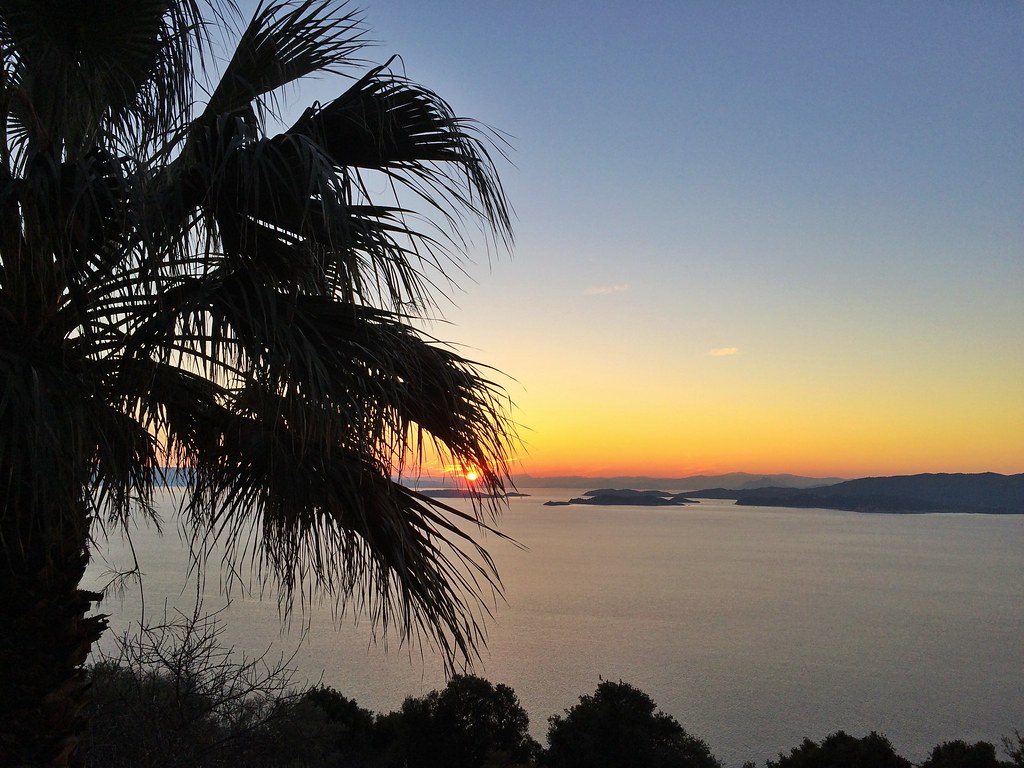 The next day was another cracker so we headed out again – to buy that damn cheddar. As we rounded a bend, Panormos Beach came into view and it looked like smouldering ashes from a fire. The sun hit the cool waters and steam rose up into the air. We pulled up to admire the spectacle and then checked out the sparkling water along the shoreline. Seeing as we enjoyed yesterday’s dirt road we decided to try another one down towards Agnontas village which is a little port. We drove through a dense forest with the occasional sound of jingling bells from nearby goats or sheep. We made it to Stafilo Beach which is one of the islands most popular thanks to its proximity to Skopelos town. The road abruptly ended near the beach without, warning or even a carpark in sight. So we just left the jeep awkwardly at the end of the road. It wasn’t the islands prettiest beach in my opinion. It was a bit sandy which is a rarity in this island, but it was quite a dark beige colour and didn’t ooze tropical vibes. 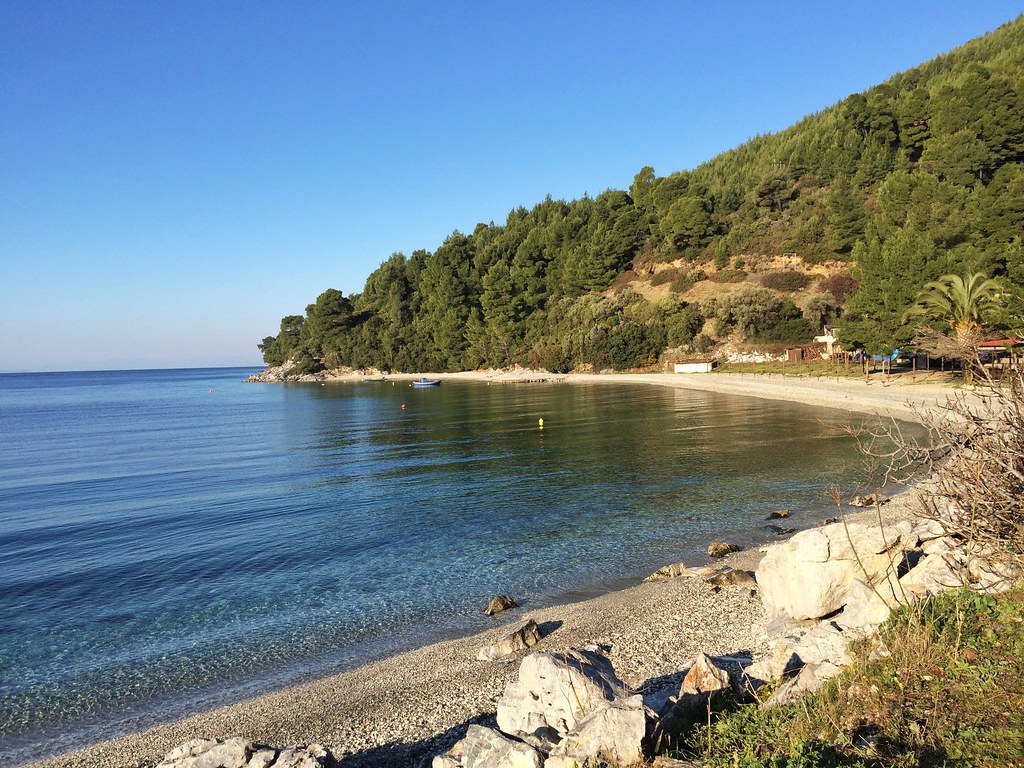 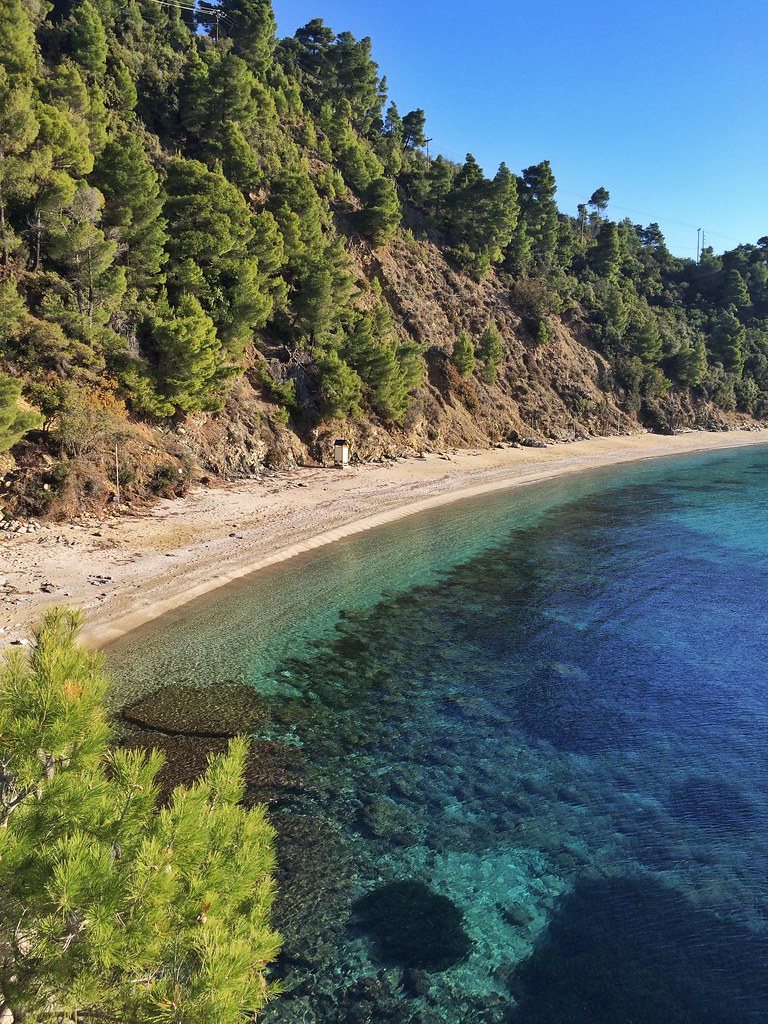 We eventually made it to Skopelos and I enjoyed wandering up and down random alleys through the village, unsure of where we’d end up. I could spend hours walking around photographing the beautifully painted doors and shutters. We finally got our cheddar cheese along with lots of food and then we set off back home. We’d actually brought our swimwear along with us today as the weather can be delightfully warm if the suns out and the winds not blowing. So we pulled up at Kastani Beach and opened the doors only to be hit by strong wind. There was no chance we were going to brave swimming today, or any day soon for that matter. The beach was very beautiful and a mix of sand and gravel. This beach was one of the filming locations in the Mama Mia movie and a taverna bearing the same name (closed now for the season) sat at the back of the beach. Skopelos might not be an island renowned for its beaches but with water that clear it all looks like paradise to us. 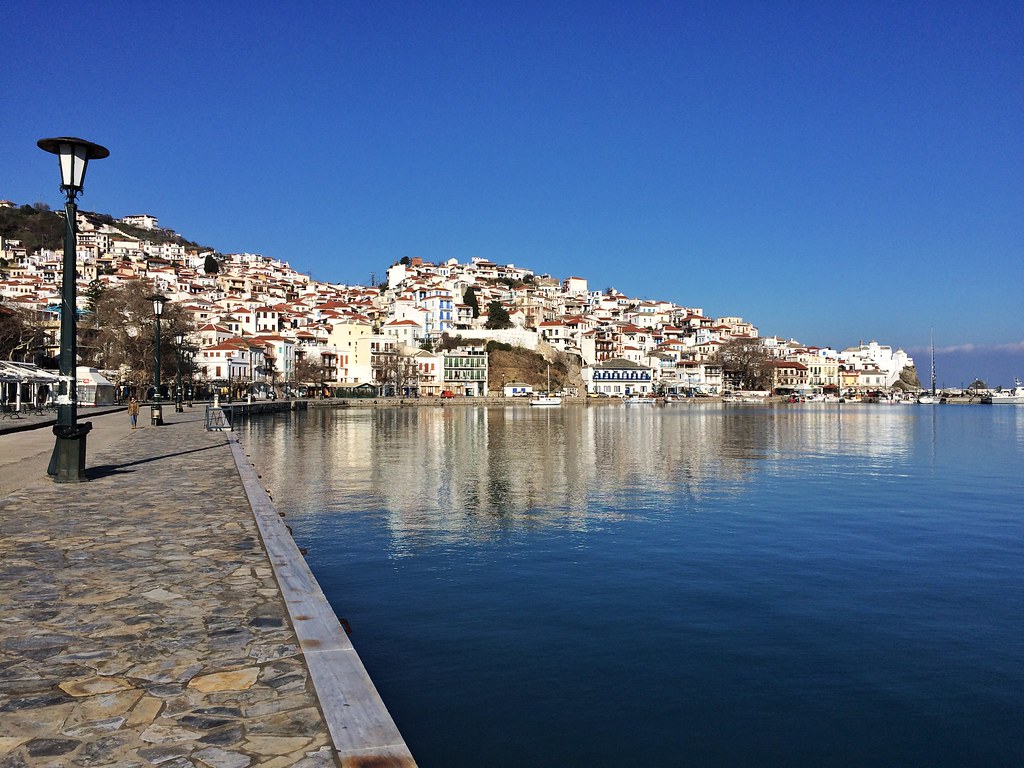 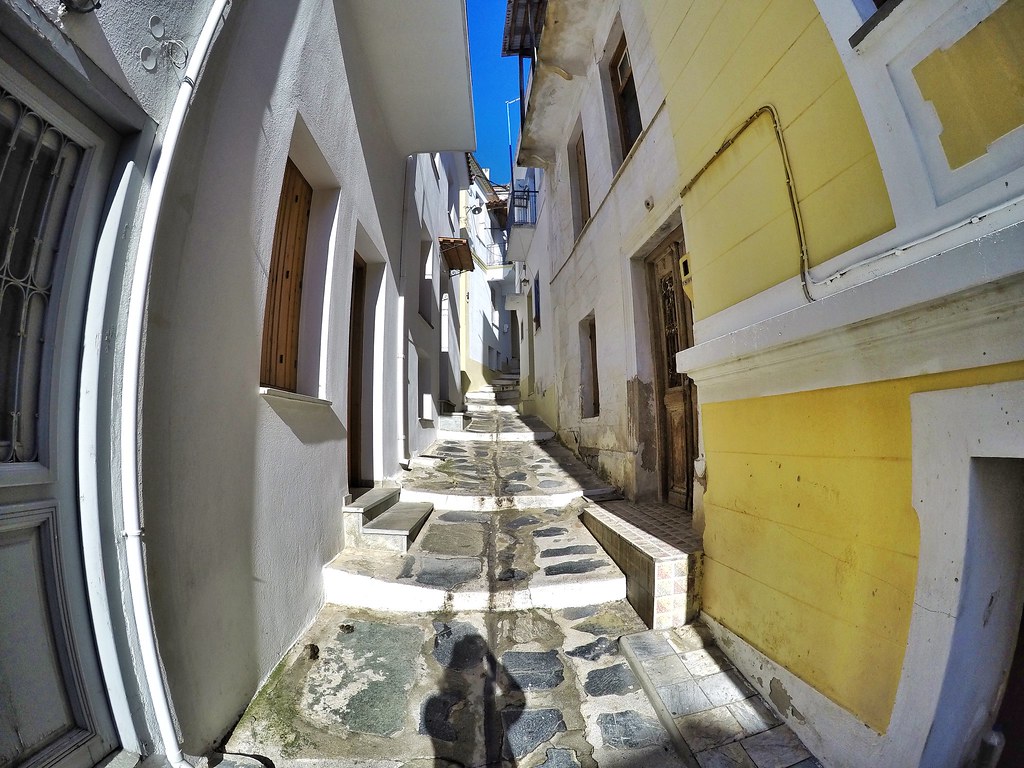 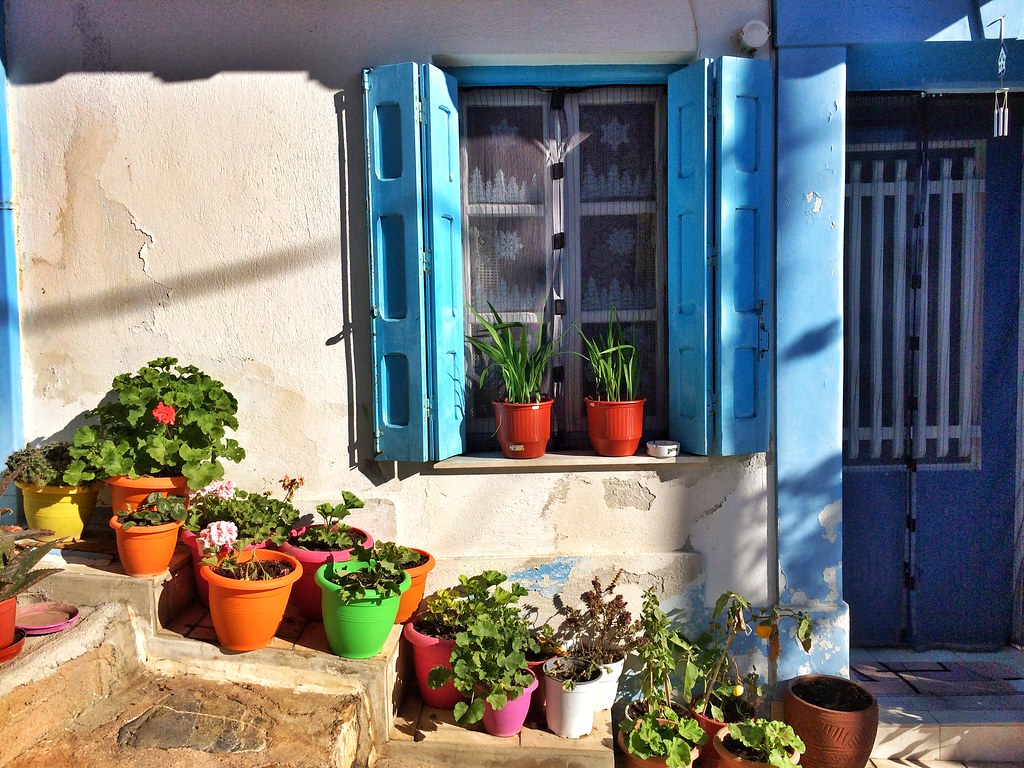 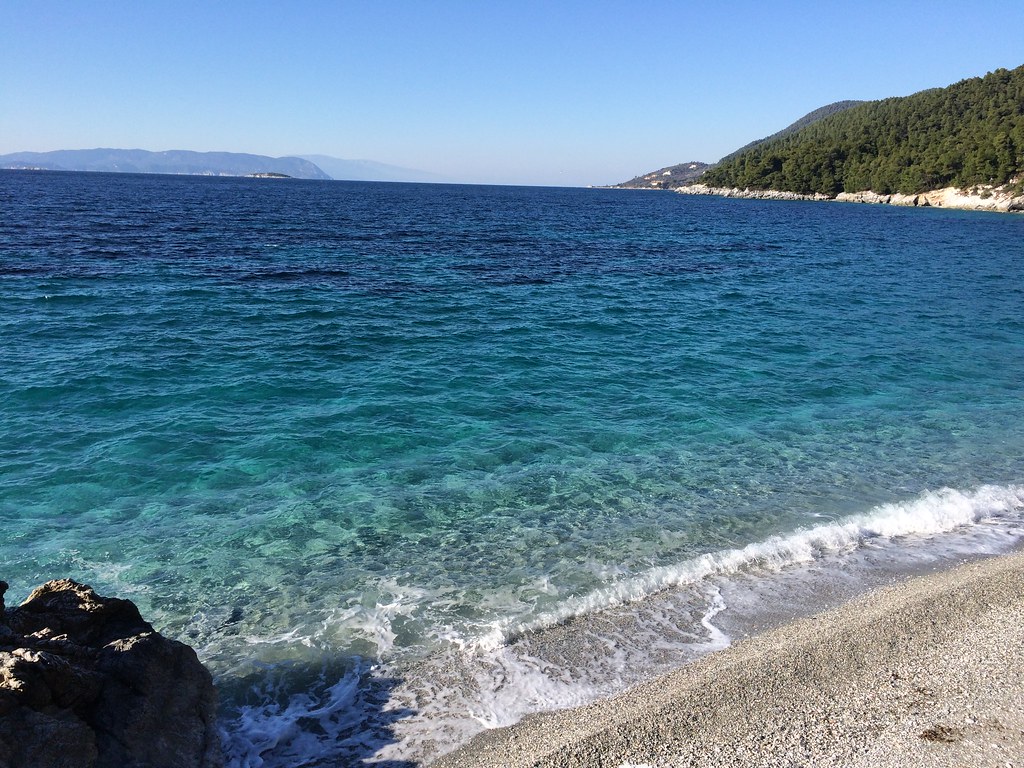 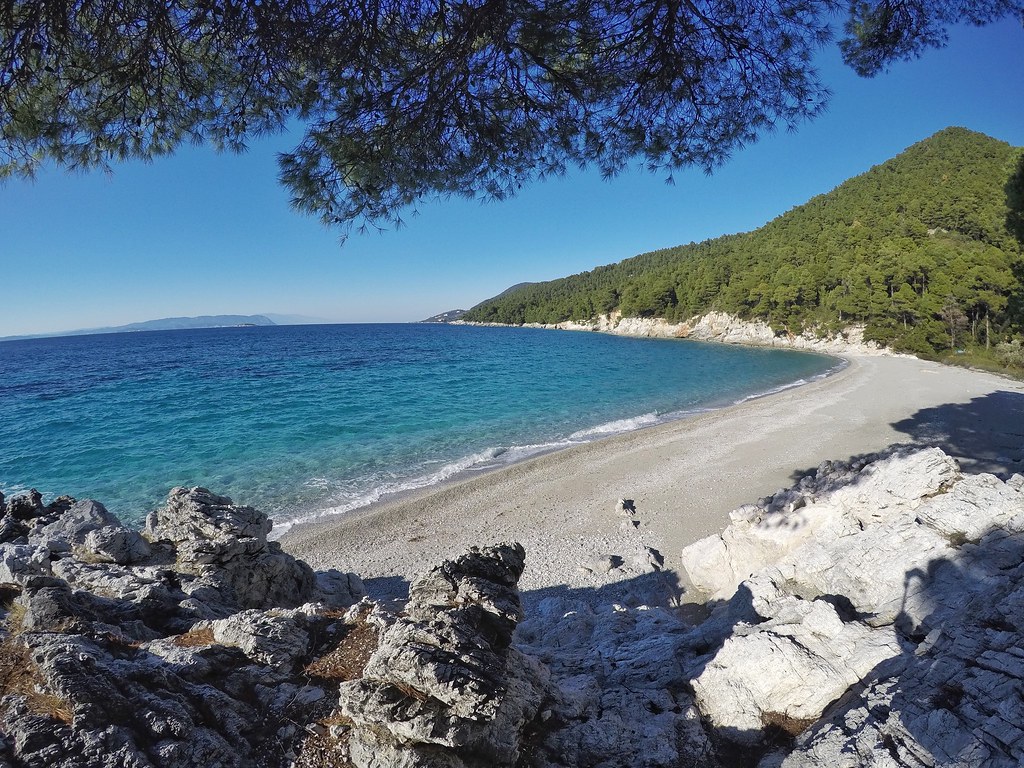