A Cenote is basically a natural swimming hole where limestone rock has collapsed and it’s like an open invitation into the magical underground river system. These mineral rich pools can be in caves or surrounded by dense jungle and the Yucatan Peninsula is dotted with them. After browsing the internet I ended up picking Gran Cenote, which is probably one of the most popular ones but I figured it’s got to be popular for a reason, right? 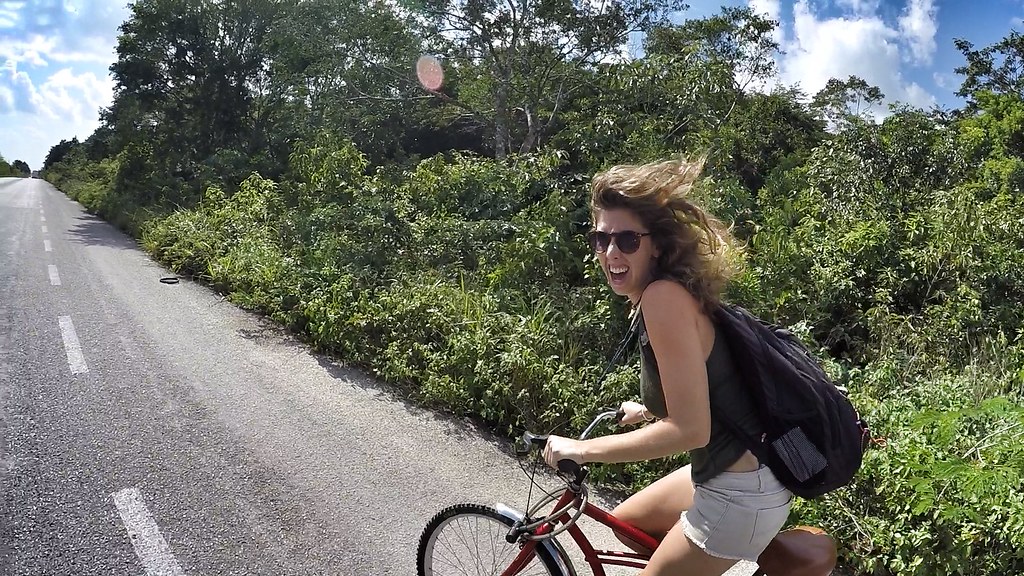 We hired a couple of retro, curved handle barred bikes and hit the road. Once we left Tulum and turned towards Coba the traffic eased and it was just the odd car flying by as if it was in the Grand Prix. The roadside had lots of dead and tangled giant crickets, hit by cars, and ran over by us. It was only 5km to reach the Cenote which cost about $7.50 entry. It was located in a cave and the glistening pool lay below an overhanging sort of natural opening. We brought our snorkels along as we learnt in Florida that the highlight of places like this is the underworld. I could hardly see a thing when I looked down though, it was murky and sandy and I was thinking it was a waste of money. Luckily that just seemed to be a busy area getting disturbed constantly, so we swam away and the clarity instantly improved. It wasn’t as clear as Florida’s springs but then again we always had them to ourselves so no one was stepping on the ground. As we ventured through the Cenote the water became a royal blue with sun beams shooting down. We were basically snorkelling inside a water-filled cave so certain areas were covered in stalagtites which were fascinating to see underwater. A few big columns rose from the floor to the cave ceiling and we could swim right through them. It was a really unique sight actually and I’m not even that interested in caves but I enjoyed this a lot. You could swim to some really dark hidden corners of the cave which were far too scary for me but in the depths of the darkness a light would appear and that would be where scuba divers were. I love diving but I can’t see the appeal in cave diving, sure I just admitted it was cooler seeing the cave formations underwater than just walking into a dry cave but diving through narrow cave openings in the pitch black sounds terrifying. What if the torches all fail, or your goggles get pulled off by a pointy stalagtite, or you get disorientated and run out of air in the maze of a cave system. No thank you! I was very content with just my snorkels. 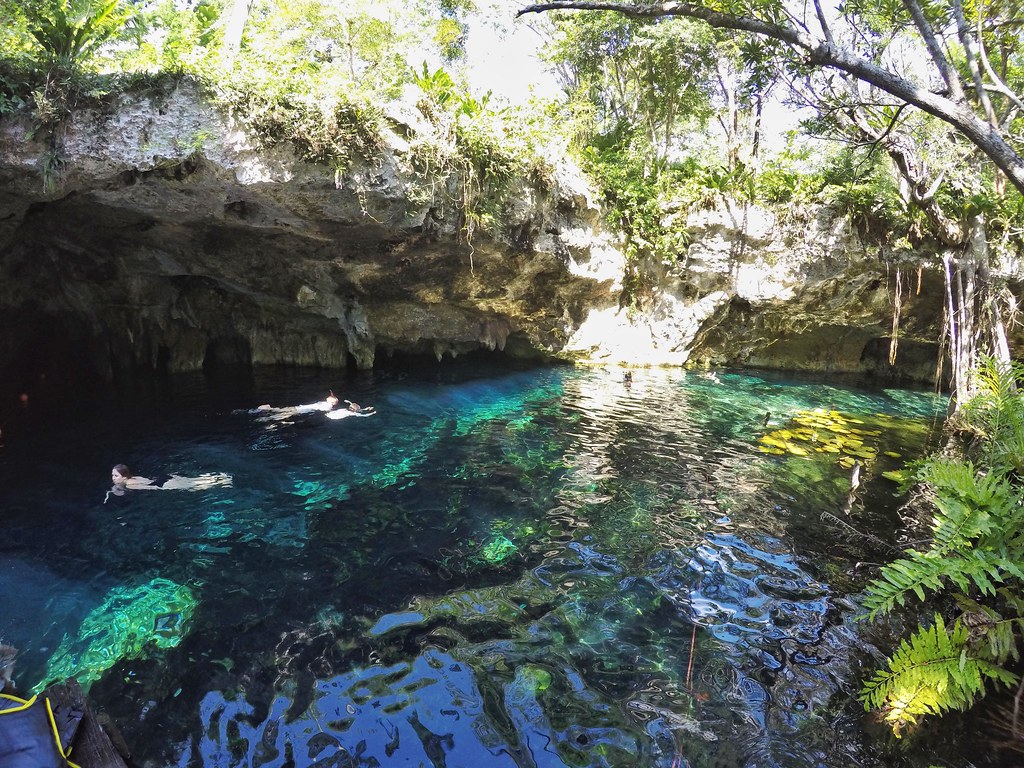 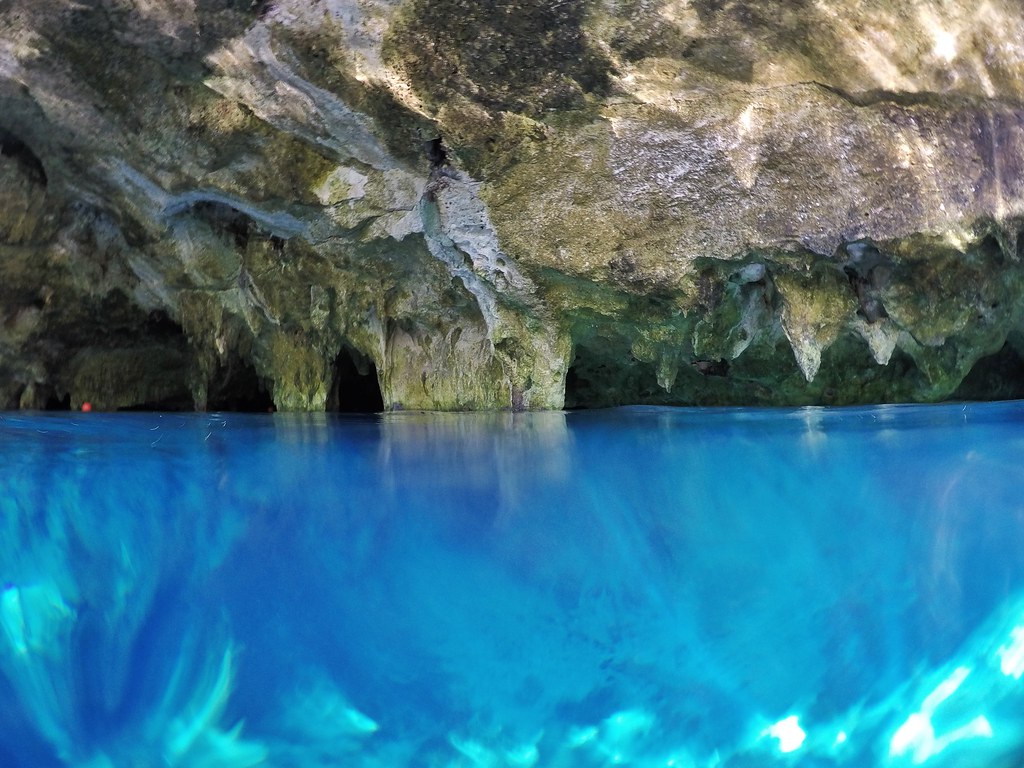 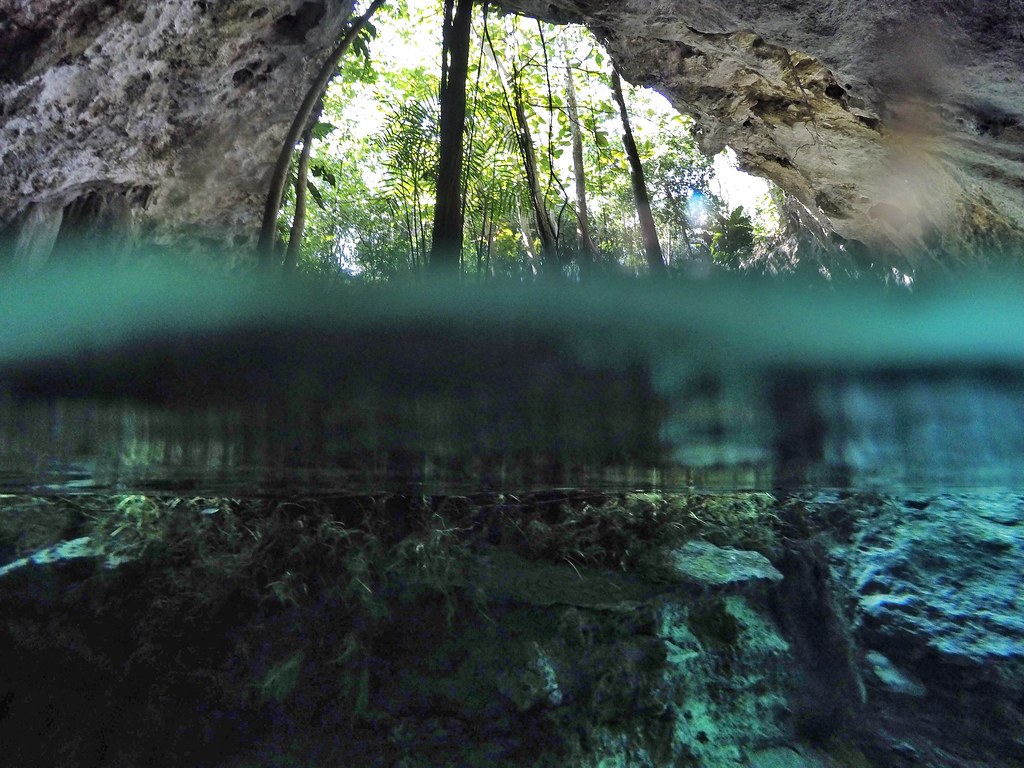 We ventured through an area of the cave where we had a ceiling above us and a hole at either end. So looking underwater it was all dark except for a fluorescent blue light at the end. It was shallow through here and the ground wasn’t rocky or cave like but was like a powdery sand or dust that plumed when you stepped on it. There were lots of little fish in the Cenote and we saw a few turtles swimming around, although most of them were sunbathing on land. 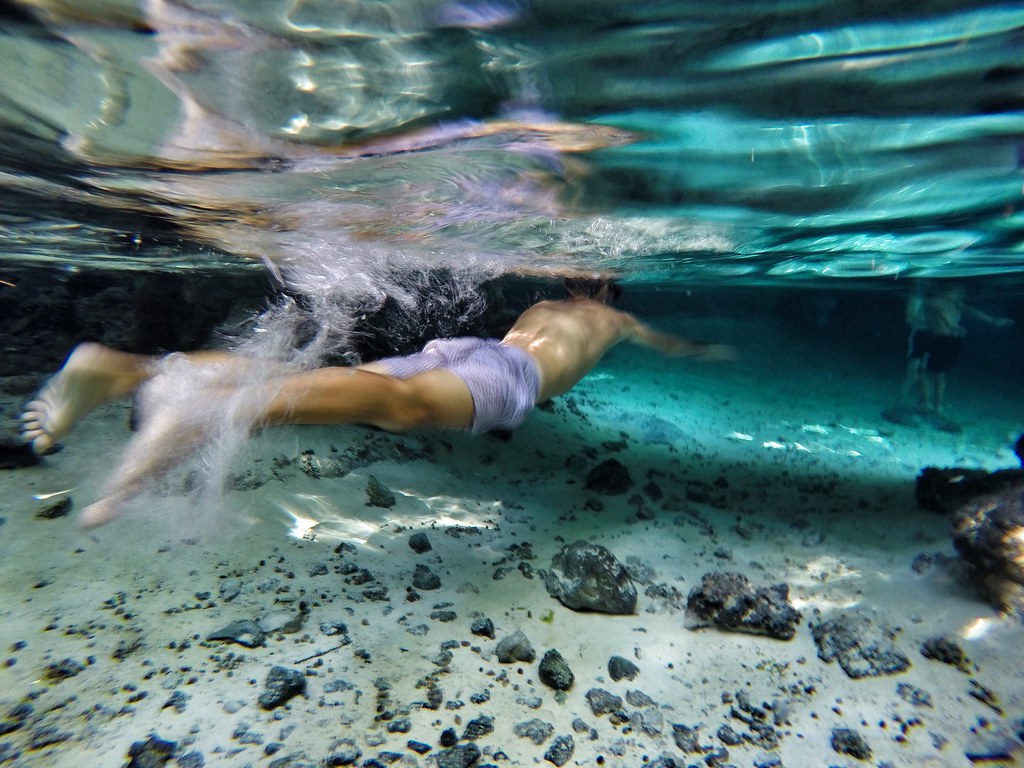 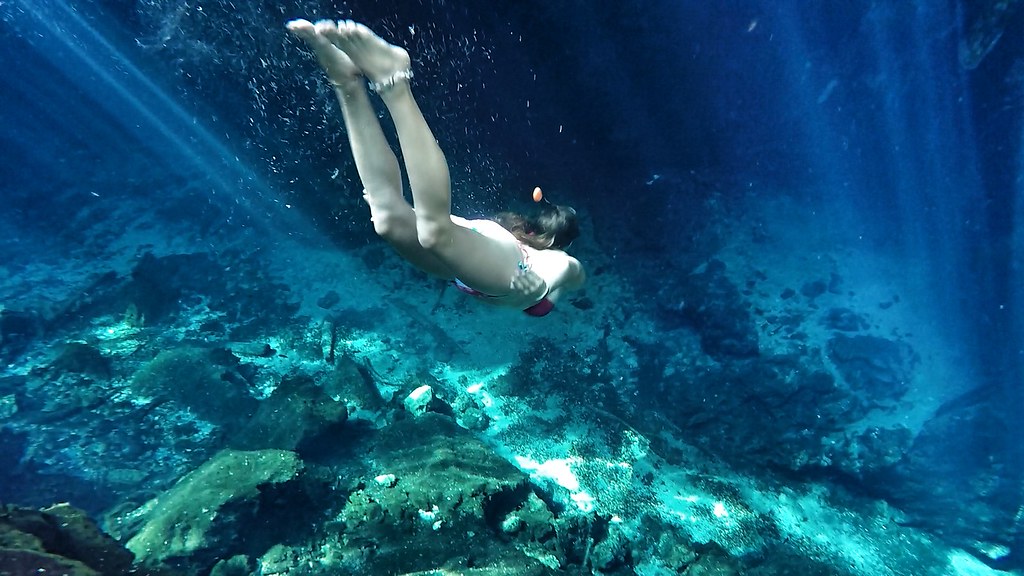 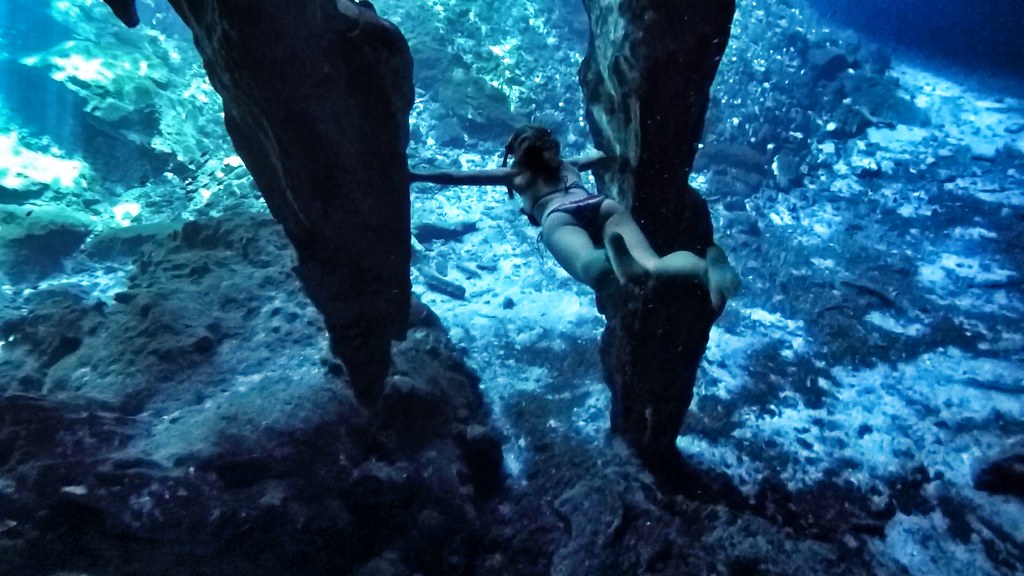 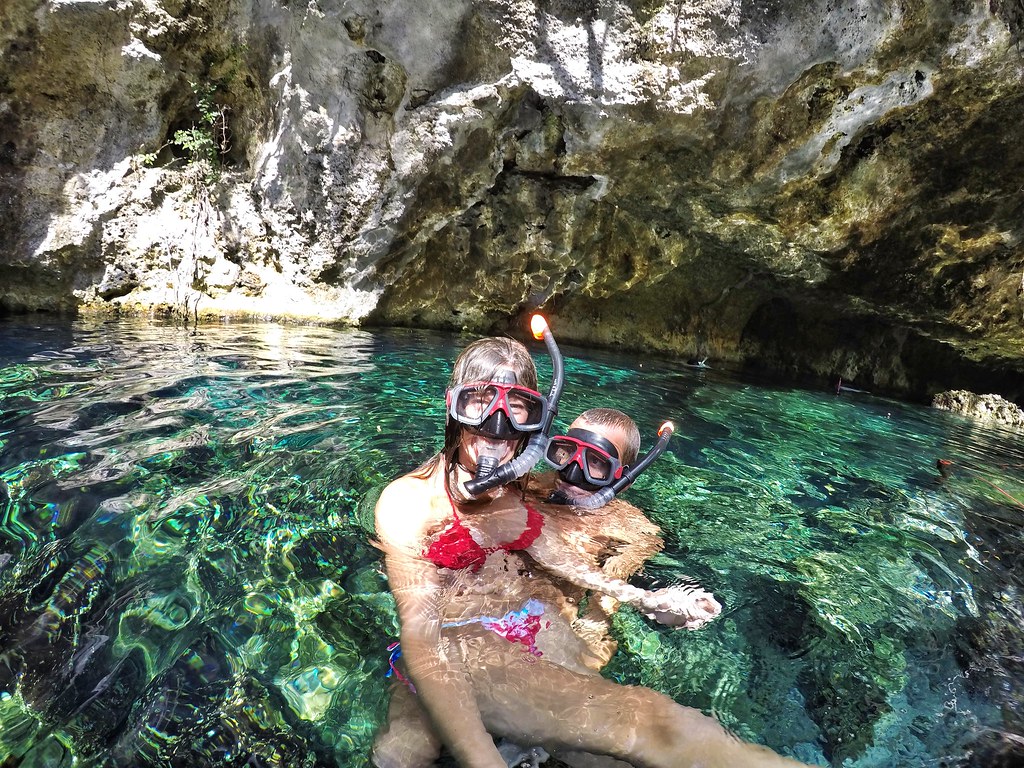 The Cenote got busier the longer we were there and the water was actually quite chilly so after a couple of swims and exploration we were happy to leave. On the way back we stopped at Calavera Cenote. I wasn’t sure if I wanted to go to this one as the photo made it look pretty creepy, it was a sinkhole with a deep, dark hole filled with water. Then when I googled it an option for the search was ‘Calavera Cenote accident’ so of course I had to click on that and it said two divers died while diving there…so now it was 100x creepier, Calavera also means skull and it’s even revered to as The Temple of Doom. So there we were, paying $5 each to enter this creepy place and I was actually pleasantly surprised when we got there. Two people were sunbathing near the edge and two were exiting the pool so it was nice that there were some people there but it was also very quiet, certainly a lesser known Cenote. 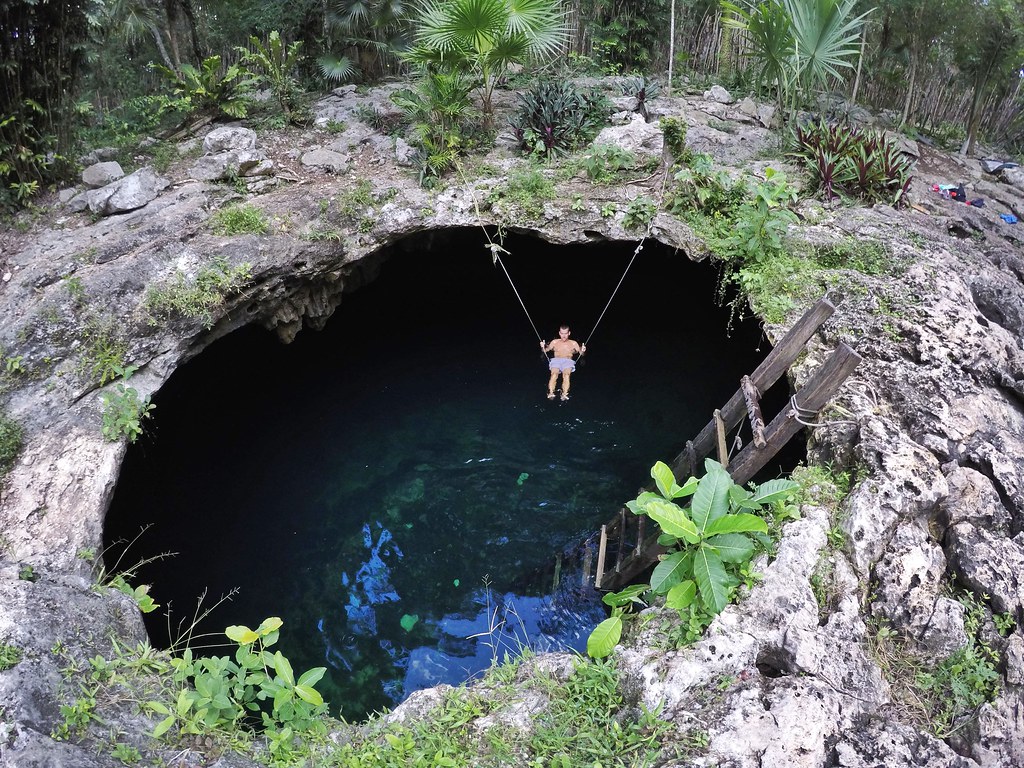 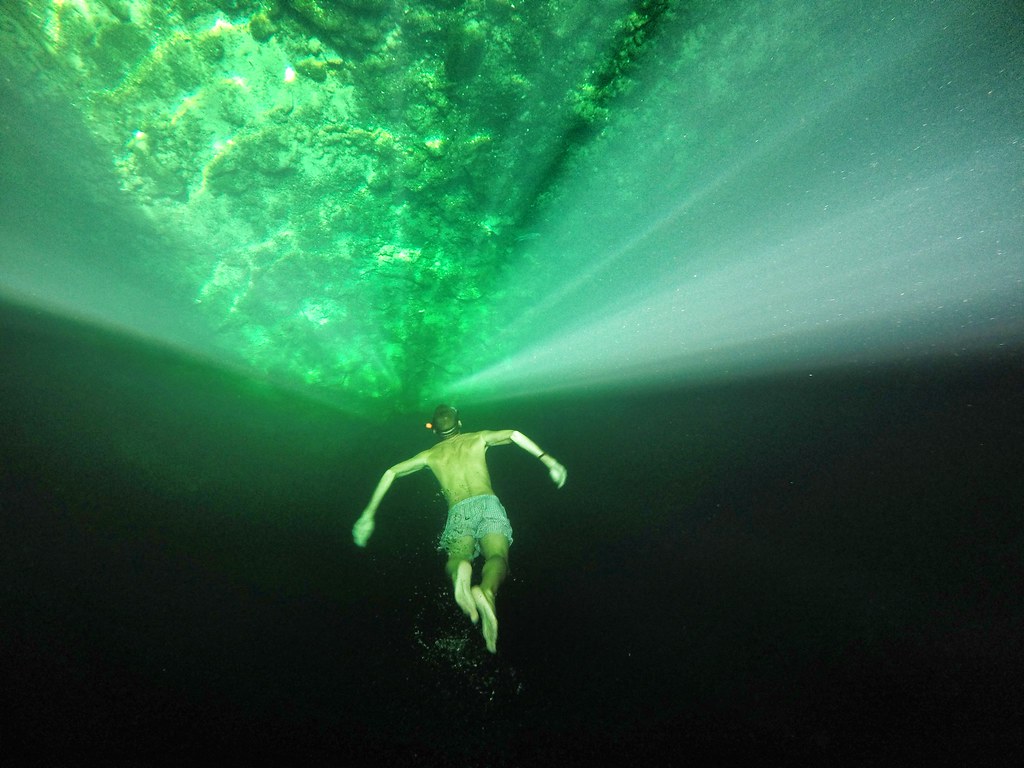 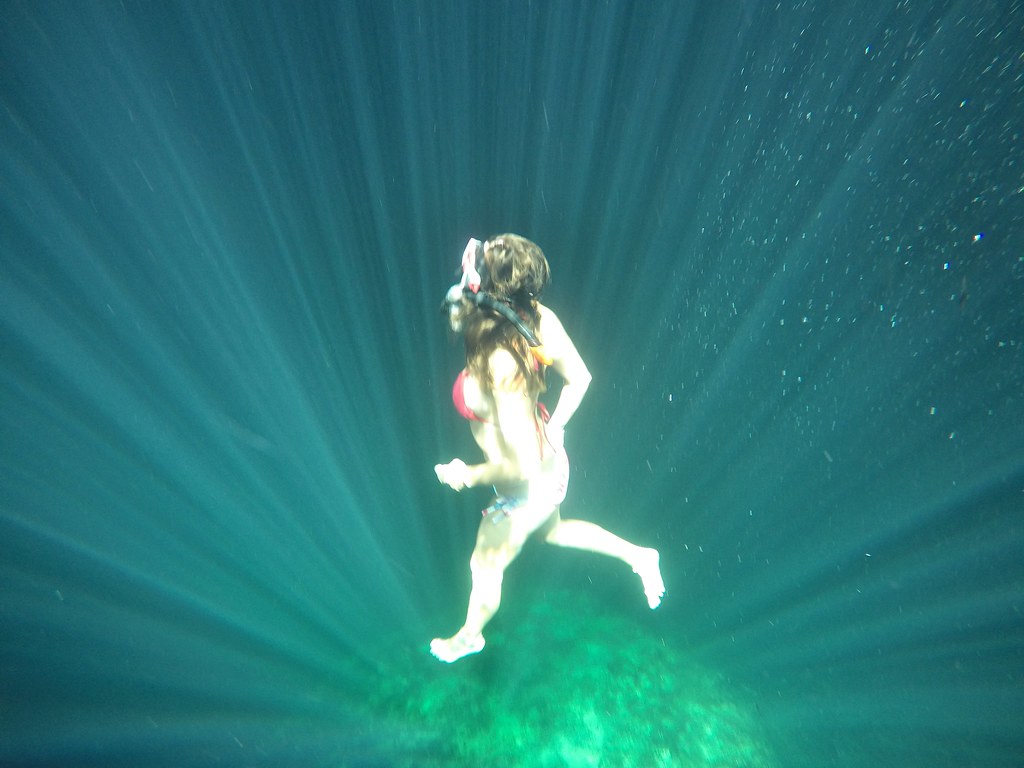 As soon as I got into my bikini the sun went in and the small patch of light that beamed through the hole vanished and turned the water a dark ink colour. Craig was keen to go in so he jumped in from the edge and climbed back out via the slightly slimy ladder. I patiently waited for the sun to come back out before I jumped in and it seemed to take forever for me to rise back to the surface. I didn’t stay long and swam straight for the ladder to escape. After a couple jumps I became more confident and we went for a snorkel. It was a total contrast to Gran Cenote, here it was just a hole with a flat ground maybe 5 meters deep but then the edges disappeared into the darkness going deeper into the cave. This Cenote didn’t seem as clear as the previous one but it meant that the sunbeams showed up more and they were absolutely incredible and totally mesmerising to watch them change around us like a turning crystal in the sun. The ceiling had really ugly bats hanging upside down and even their fangs were visible! It was a really unique Cenote and felt pretty off the beaten track compared to others in the area. 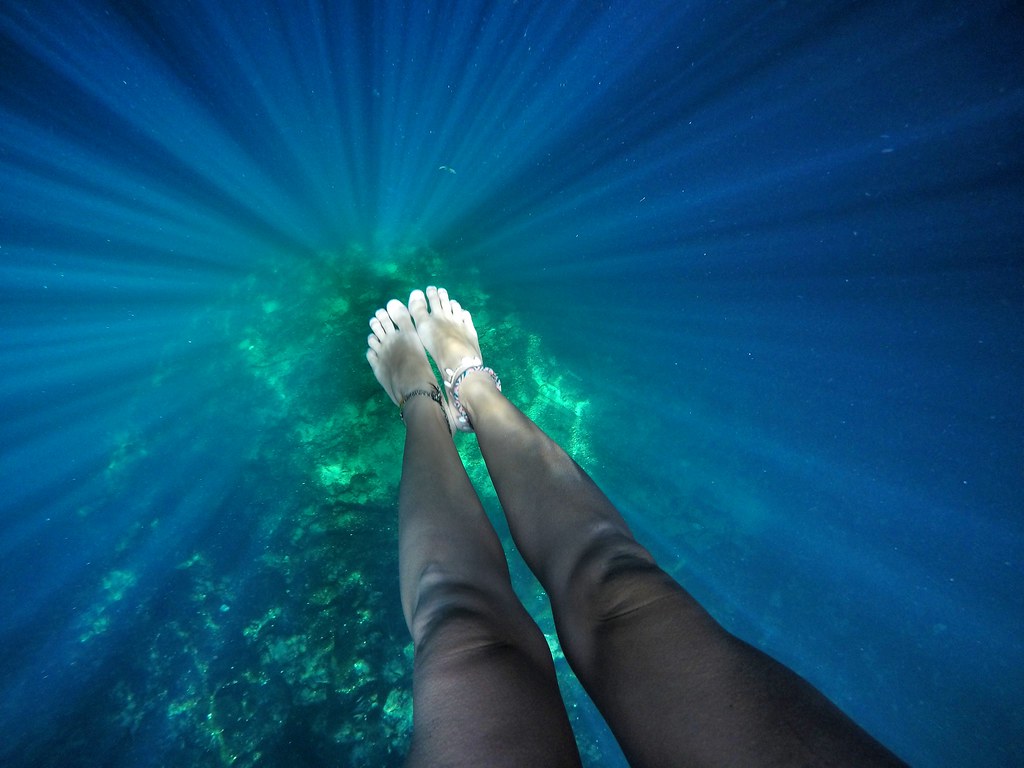 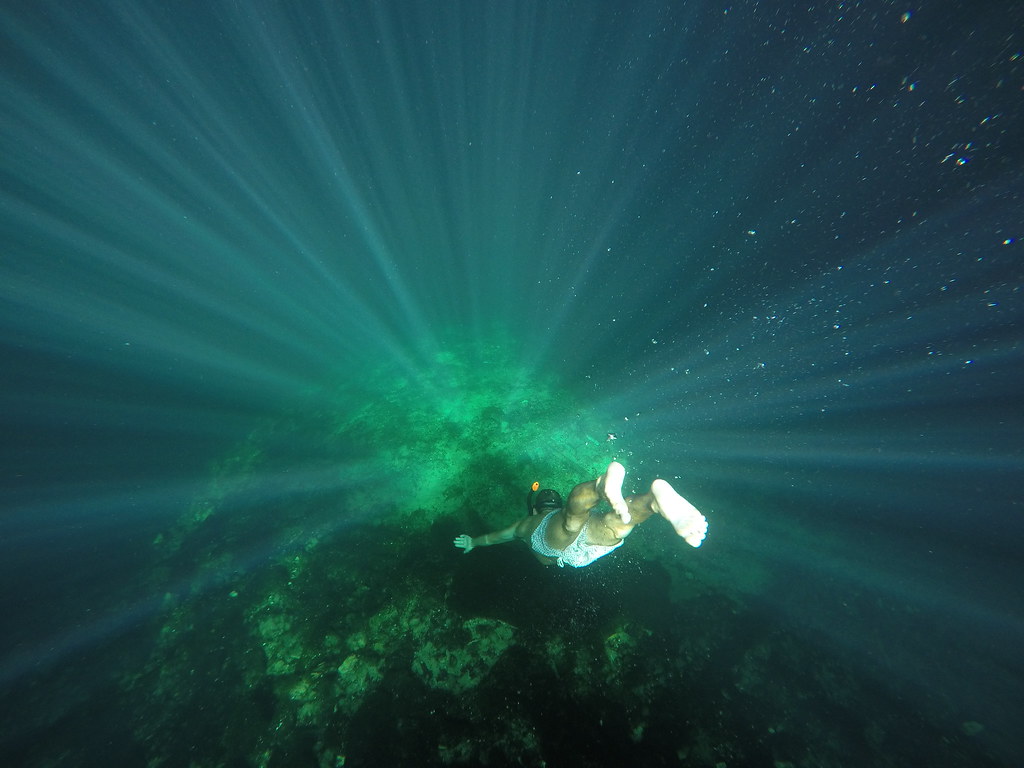 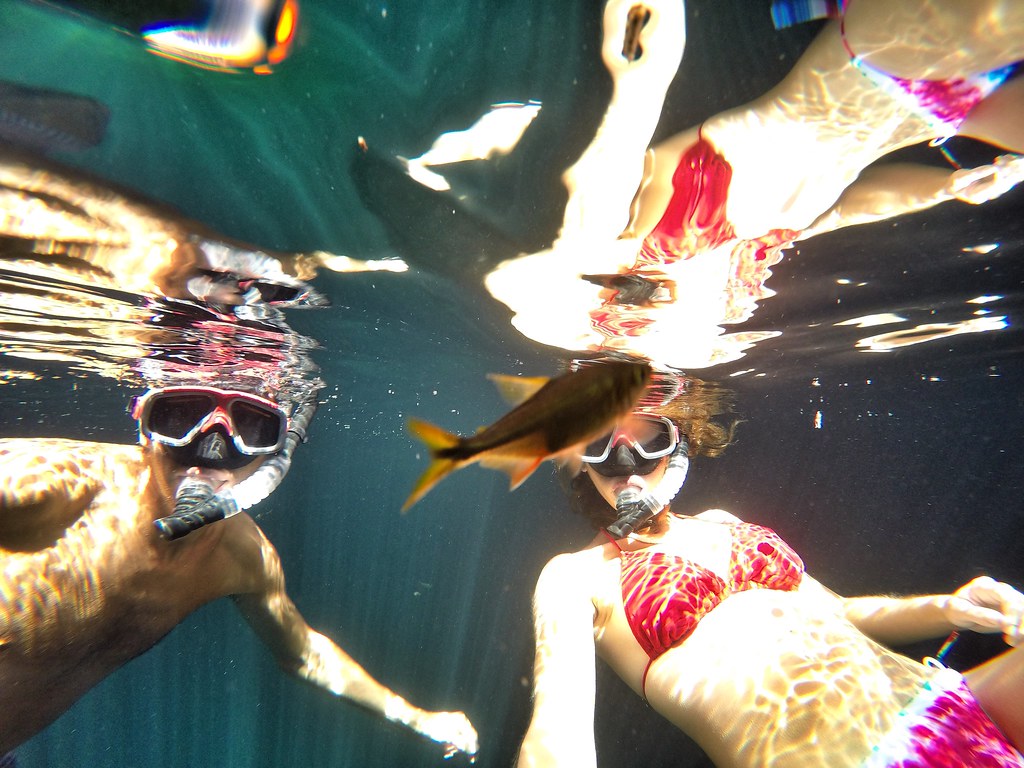