A smooth flight took us over the Florida keys and across the Gulf of Mexico landing us in sunny Cancun for a nine day little holiday – a bizarre concept for us long term travellers. We arrived in a very organised airport with toilets much cleaner and more modern than the squaller ones at Fort Lauderdale. I went up to one of the dozens and dozens of tourist information helpers, I picked a really grumpy looking Mexican man but as soon as we approached him his face lit up and he spoke brilliant English to us which made our life much easier. Getting a bus was a piece of piss and it cost about $10 for the two hour journey south to Tulum. Craig popped to the toilet before we left and a pilot began chatting to me…he was at least 50 years old but quite flirty. Craig still wasn’t back so I had to drag all our bags onto the bus and then we all boarded. The pilot was sat in front of us and I asked him where he was from and got completely ignored as a sexy Mexican lady sat next to him. Craig was doing a stupid silent yet totally exaggerated and dramatised laugh at me and we both got the giggles after that. We had to change buses at Playa Del Carmen and hopped into a freezer bus where the locals were all bundled up in blankets because the AC was practically blowing dry ice through the bus. I don’t know how but the whole 2 hour trip took basically 4 hours. We were pretty hungry when we arrived in Tulum and our Airbnb host had offered to pick us up from the bus station but we didn’t have wifi to contact her, so we went back to our old ways and walked with the heaviest backpacks we’ve ever had for the 0.7 mile journey. Craig ‘followed’ our progress on the map “3 more roads to go” he said…Next thing I know it’s all dark and we’re walking along a gravelly path which had been overtaken by the jungle. We’d left town, there was no way it was this way so we asked a local for help and were directed back the way we’d come. The road didn’t actually have a sign, but we were finally on the right track…we just had to find her apartment. The address the host gave us was the road name and her flat number…so we just helplessly peered into gated complexes like homeless dogs hoping to recognise the pool from photos we’d seen. Our backs were in agony and for some reason my phone wouldn’t let me call her but thankfully a young lady helped us and let us go back to her place nearby to use her wifi. She had three rescued dogs and they were full of joy and wanted non-stop attention. An hour after we began walking our host picked us up and I shed a tear when we reached the apartment which we’d walked past so long ago.

We rushed out for dinner and found a really busy Taco eatery. This one seemed to be famous for its kebab style meat, which I refer to as an elephants leg of meat but its called Pastor here. We got three tacos each, they were between 35 and 50 cents each depending on if you wanted cheese or not and they even had a veggie option for me. The tacos are basically two small tortillas with meat on them (or veg in my case) and then you go up to add your toppings. The toppings were free so we added far too much to the point that it was impossible to eat our tacos. Craig had ladled the hot salsa on and it’s the first time I’ve ever seen him struggle with spicy food. His eyes were so watery it was like he was on the verge of crying and his mouth was clearly on fire. He desperately needed another drink but was struggling to get the waiters attention and I couldn’t help but see the funny side and started taking photos of him and the funniest video of him pleading for a waiters attention that walked away “Amigo…please…help me” and then I just lost it and spat out half my taco in hysterics. We got a delicious drink called Horchata which is like a milky drink made from rice and flavoured with cinnamon and the perfect soother for a flaming mouth. 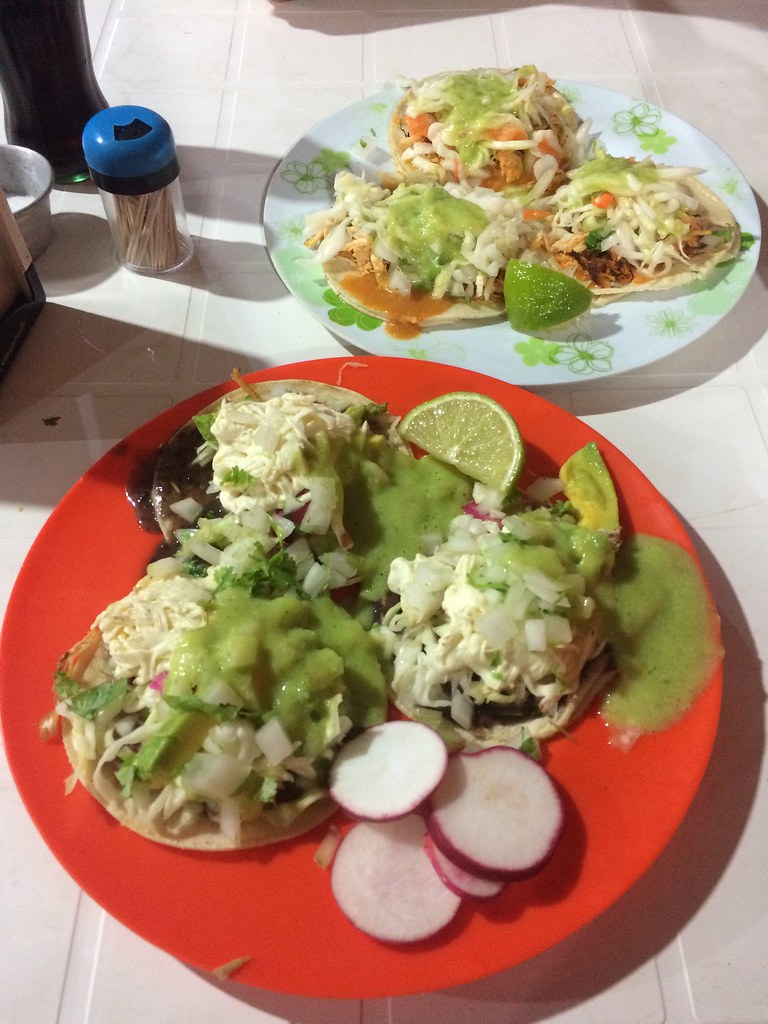 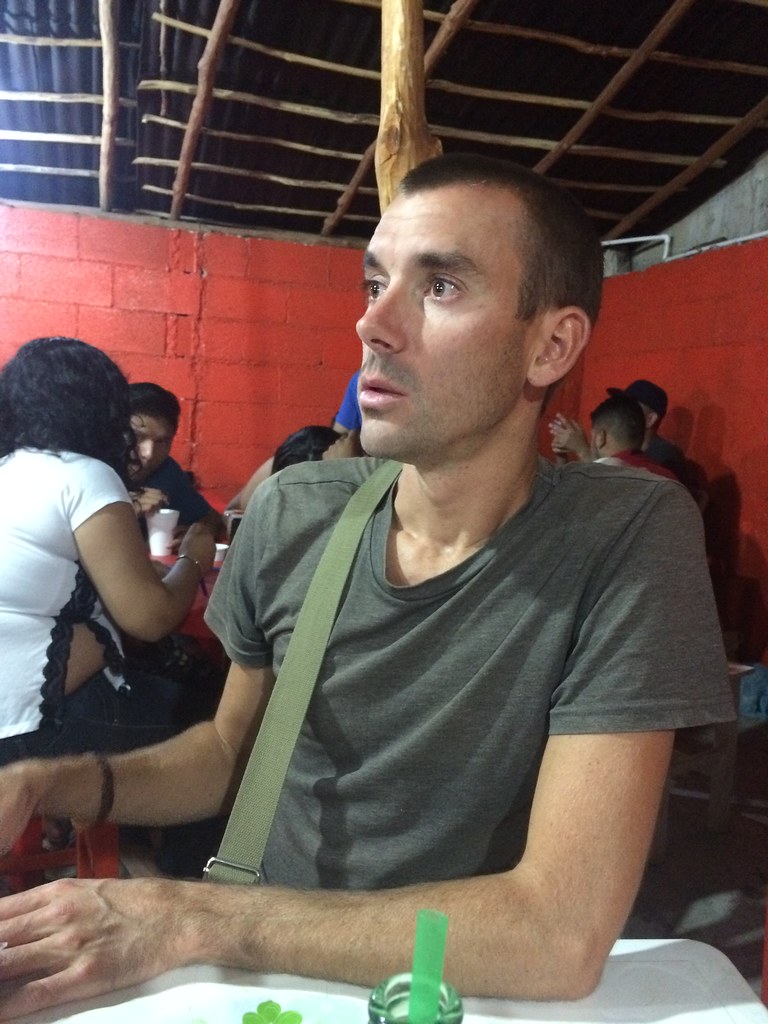 We’ve been to Mexico before, back in 2011 and we were on such a tight budget that we only spent a week and rushed off to the much cheaper countries like Guatemala. One main regret I had about that trip was cheaping out on the Cenotes, we went to a really crap one that looked more like a normal river than a cool cave so this time we will head to some good’ns. For our first day we headed out for breakfast at Frida’s, a cute place close to our apartment. We asked if we should order at the bar or take a seat and the French owner just confused the fuck out of us. We hadn’t slept well as dogs were barking all night, Mexicans were singing and our host forgot to turn our AC on so we had to have the windows open and maximise the noise. So there we were, hungry and sleepy and ze French man jus gis us a plate with ze crepe and ze pan. We just looked at each other and knew it would be over our budget, we didn’t even get a chance to look at the menu but decided to just go along with it and covered our goodies with homemade passion fruit jam and a bizarre concoction of mashed banana, chocolate and coconut. We had a coffee and sat next to a cat in confusion about what had just happened. When we went up to pay and we were told it was free and included in the room rate. Maaaate, we’re not even staying here. The French man found it pretty funny, laughing even with a French accent which I didn’t even realise was possible. He kindly only charged us $2 each which was actually a very good deal, even if I was still hungry afterwards. 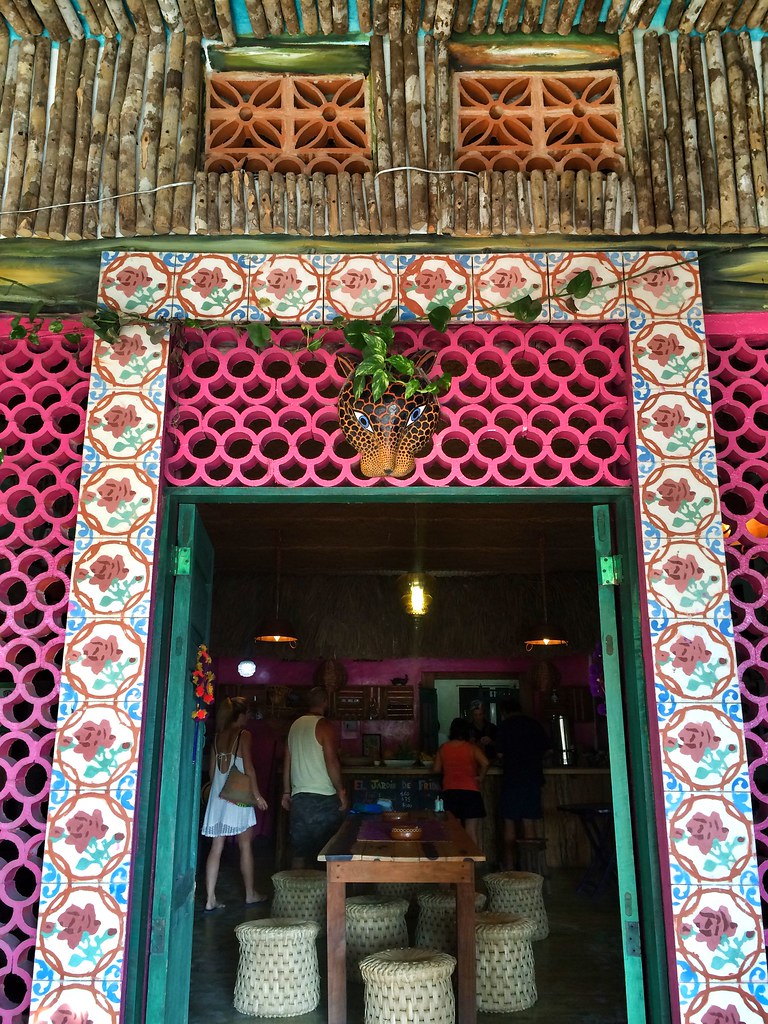 We decided to head to the Tulum Ruins today, we’ve been there before but I loved the view of the Caribbean with the ruins and palm trees and it was only $3 entry so back we went. Craig managed to lose his millionth pair of sunglasses yesterday so we started our day bartering for fake ray bans and then decided it was best to grab some lunch on the main road away from the tourist area. This local joints speciality was pork so Craig got three of those tacos but they didn’t offer any veggie items so Craig suggested I try some chicken. Nice one Craig. I couldn’t even look at the meat that was placed in front of me. Three beige tacos topped with regurgitated looking chicken that varied from white to red and brown with the odd BONE included. Craig managed to stomach a couple of them but even from a meat lovers point of view admitted that they looked absolutely rank. 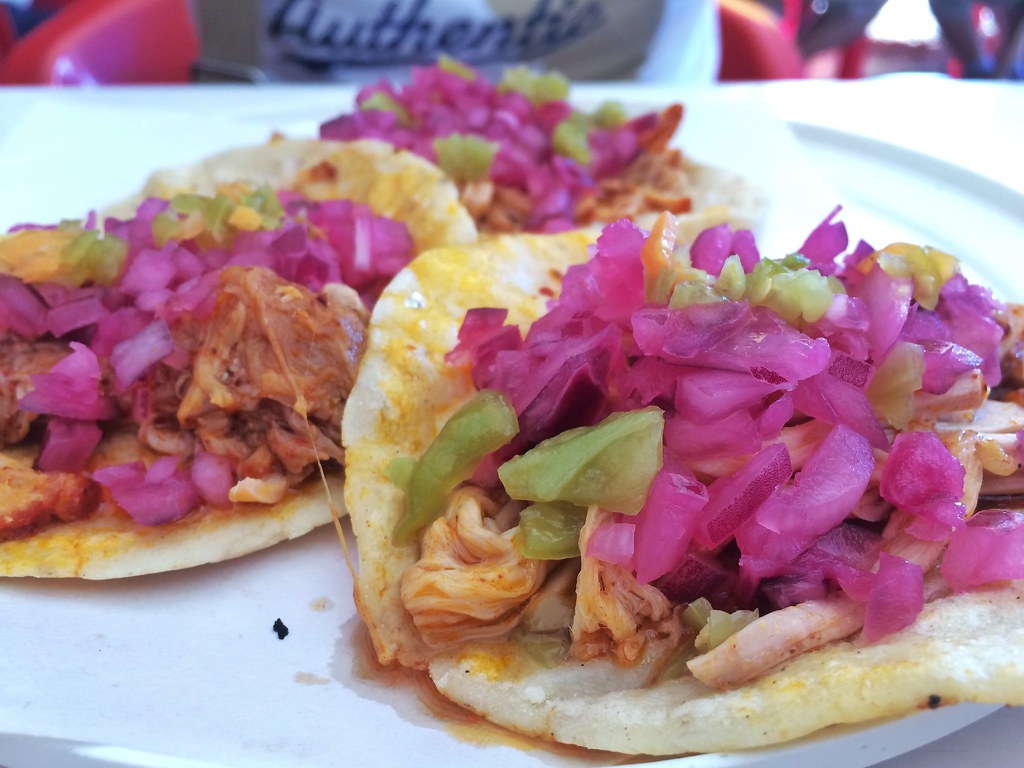 We headed back towards the ruins, passing locals dressed up in ‘tribal’ wear for tourists to take photos with them. They had painted bodies and wore loin cloths and had massive feather headpieces. Other men climbed to the top of a super high pole, wrapped a rope around their ankles and spun around upside down while another man sat at the top playing a flute. It’s quite a majestic sight actually. 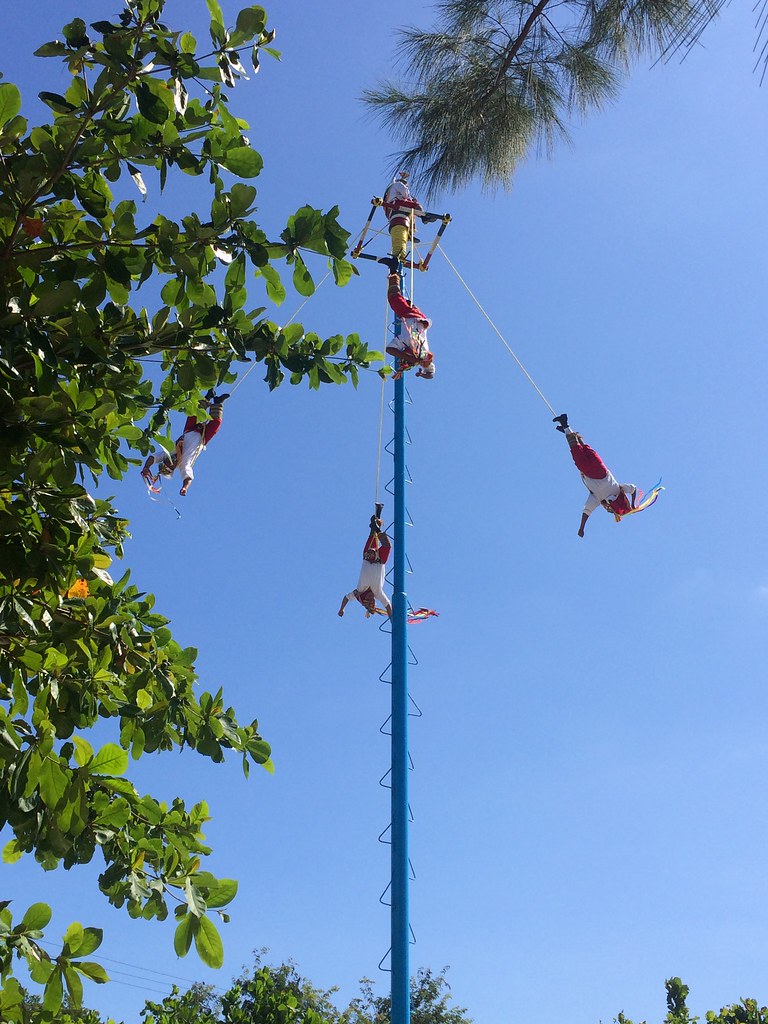 I wasn’t so fazed about the ruins themselves, I was there for the incredible view of the Caribbean. Craig was reading all the information plaques however and finding out about this ancient Mayan civilisation while I stared up at the stormy sky approaching us. It was a lot busier than when we visited 5 years ago, both times were peak season so I can only presume Tulum is developing fast and more and more tourists are flocking here. It was actually hard to take a photo waiting for people to get out the way. The sky really began to darken from the north but sun beamed on the sea from the south so it actually made for an incredible photo with such turquoise sea glistening beneath the storm. 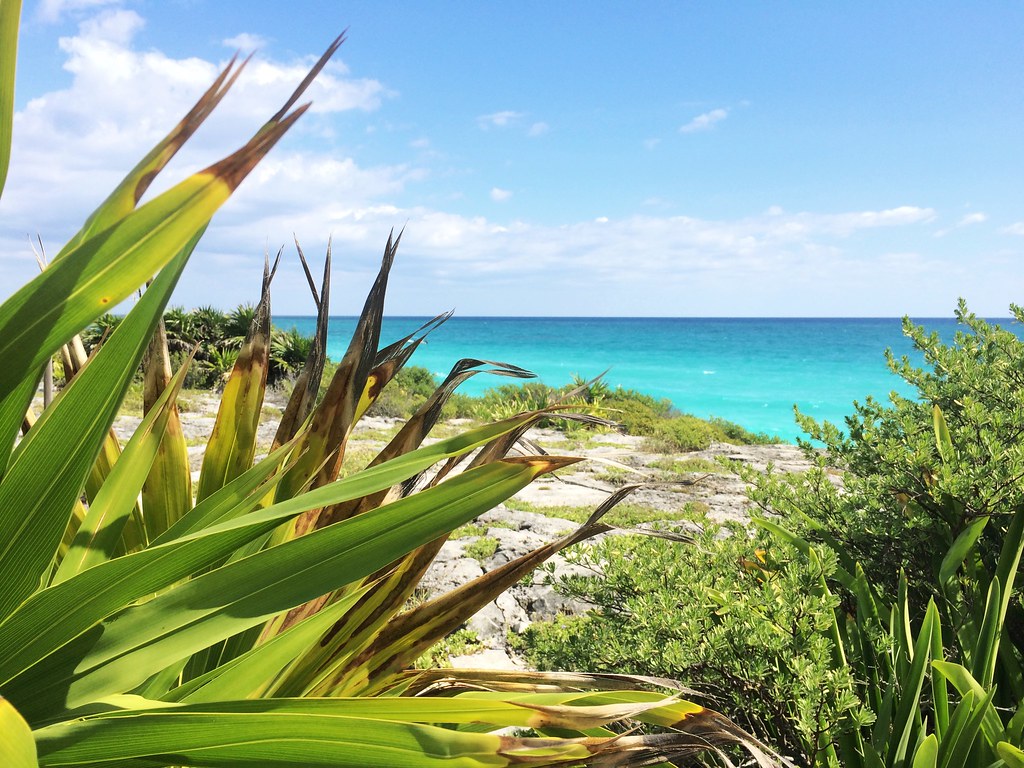 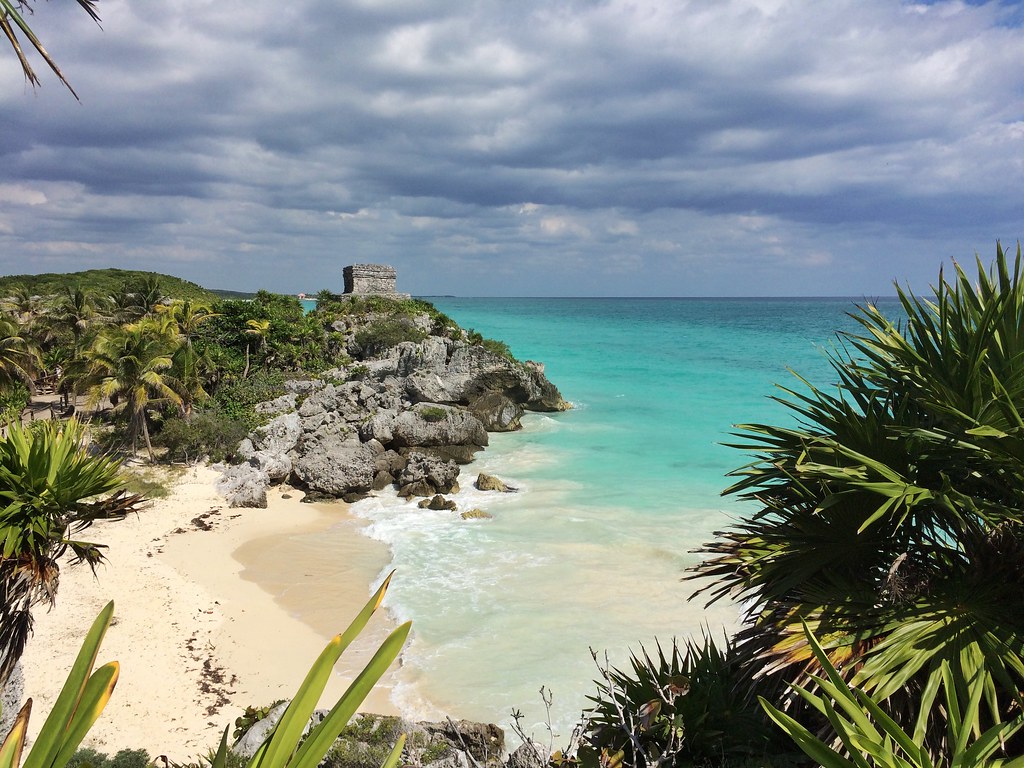 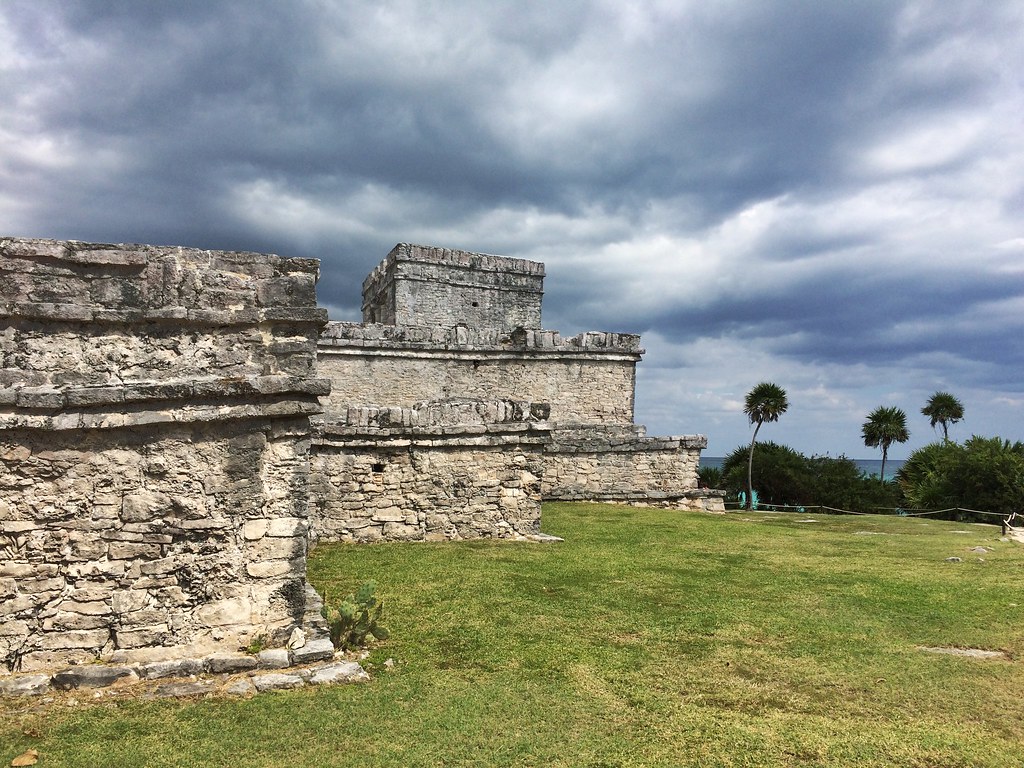 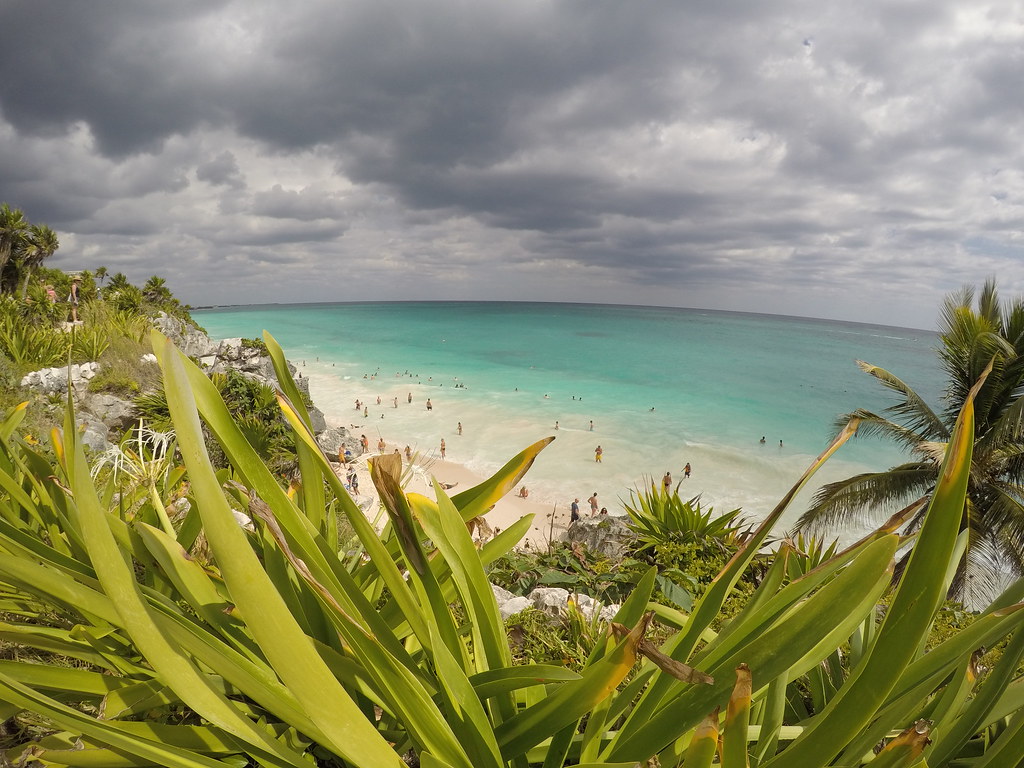 We decided to head down to the small but beautiful beach and managed to find a spot to place our towels amongst the hordes of tourists. The rocks at the back of the beach had lots of giant iguanas basking in the sun and crawling like alligators behind us. Just a few drops of rain came from the clouds and it took a couple hours for it to clear and become nice and hot again for me to dip into the wild and wavy sea. It’s a shame it was so wavy as the clarity was ruined with sand being churned up, but it was still beautiful with a turquoise colour and we had lots of fun to playing around. 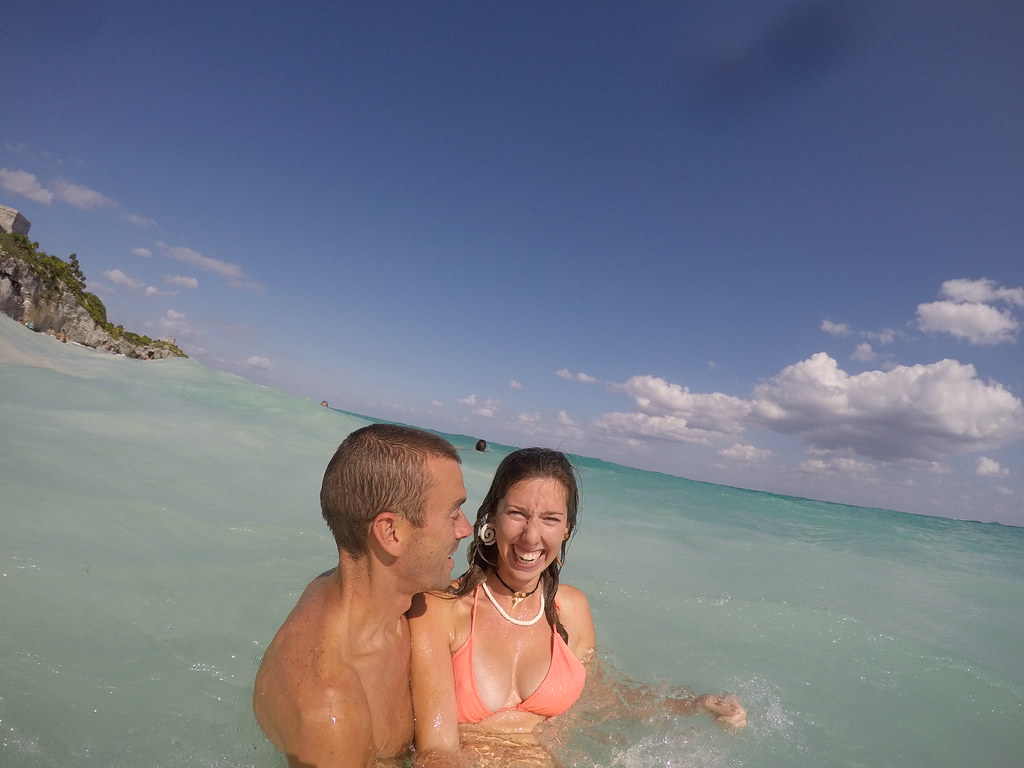 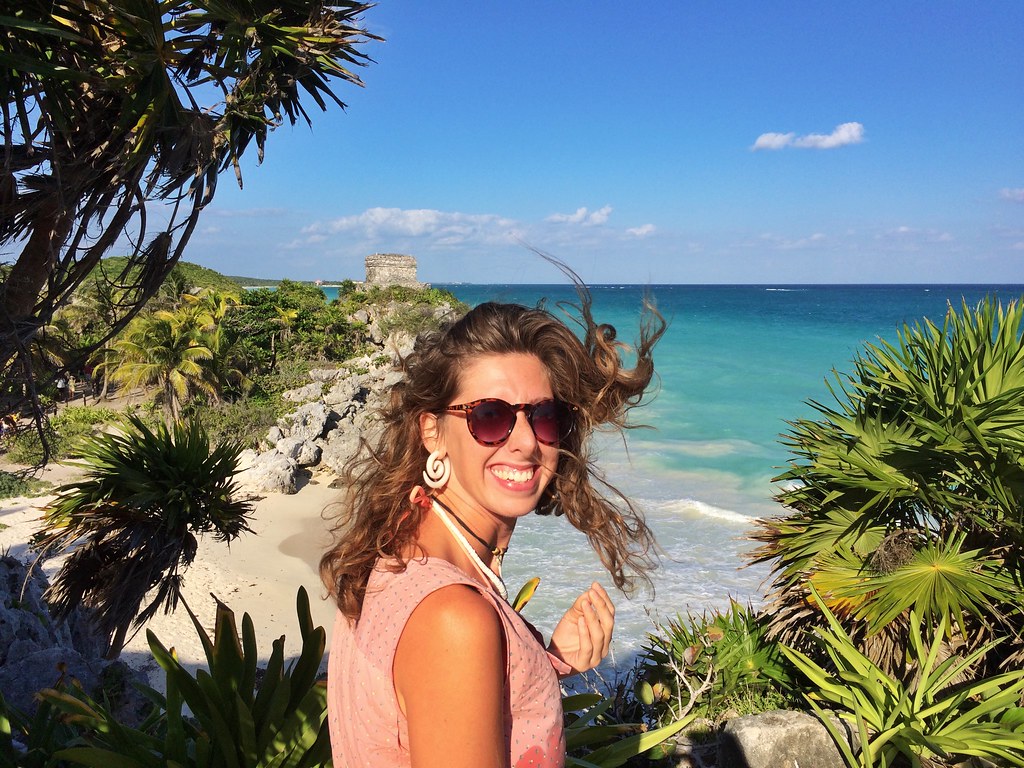 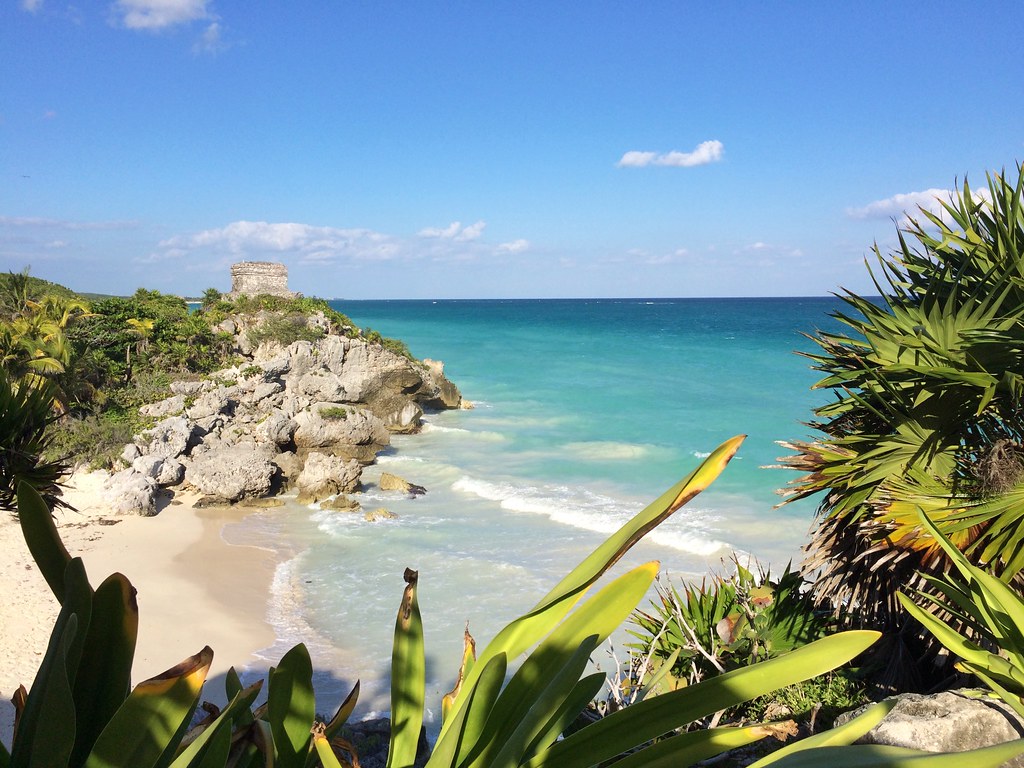 The tables turned for dinner that night and the guacamole looking sauce I added to me empanadas was in fact a blow your arse off green salsa. Craig let out a smirk as I stuck my burning tongue out my mouth to attempt to cool it off! A learning curve for both of us, test the salsa before putting it all over our meal!