We’ve conquered all our goals for this epic trip, our times running out, our visa is expiring and our flight is booked, all that’s left to do is sell Daphne, our home on wheels. We tried selling her on the outskirts of Miami, it was horrible, we did two test drives along the horribly busy roads then one guy didn’t actually have any money and the other man’s wife wasn’t allowing him to have a FOURTH vehicle. Ok…no big deal, ten days left in the country, that’s cool…ish. We hated the Miami area so decided to put some adverts up further north and hope to get some interest there. 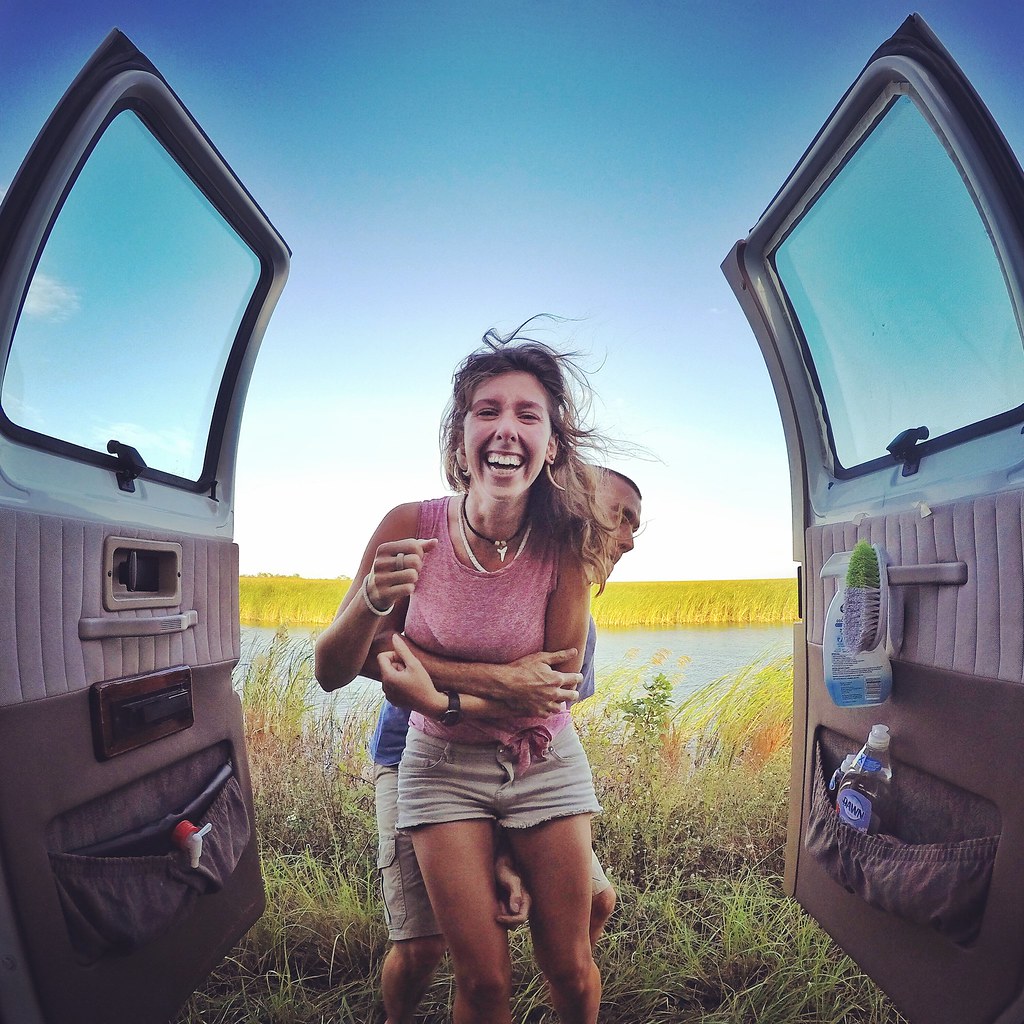 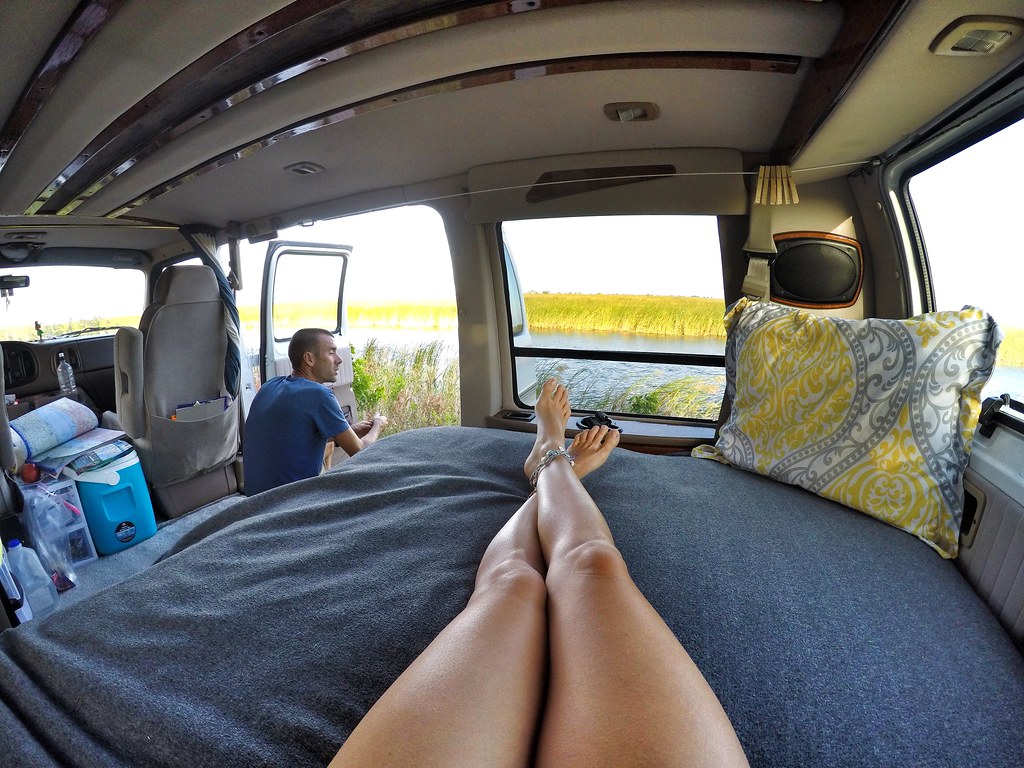 It all worked out bloody well actually as it turned out Craig had an uncle in Melbourne who he’d never met before. Tony and his wife Jan kindly invited us into their beautiful suburban home, complete with two ponds, palm trees, typical Floridian trees covered in dangly moss, a huge plot of land, a sparkly swimming pool and two adorable dogs. We managed to find a buyer nearby, a really nice surfer lad, the national champ of the east coast actually. Him and his family were lovely people, even offering for us to keep Daphne until our flight out the country. It was a tempting offer but we didn’t like the risk, we had a buyer, what if they pulled out last minute (not that they would as they were too nice a people) or what if we crashed Daphne and had to deal with insurance etc and a small pay out. Sure it was unlikely to happen but it wasn’t worth the risk – we always get worried at the end of our roadtrips, what if the van doesn’t sell? Where do we leave it? Thankfully that’s never happened and we had another successful sale. We bought Daphne for $3000 6 months ago in Anchorage, Alaska and sold her 6 months later for $2800 which we were very happy with. Of course we invested extra money when we converting her into a home and mechanics bills etc but it’s without a doubt the cheapest way to travel. We’ll miss our Daphne! 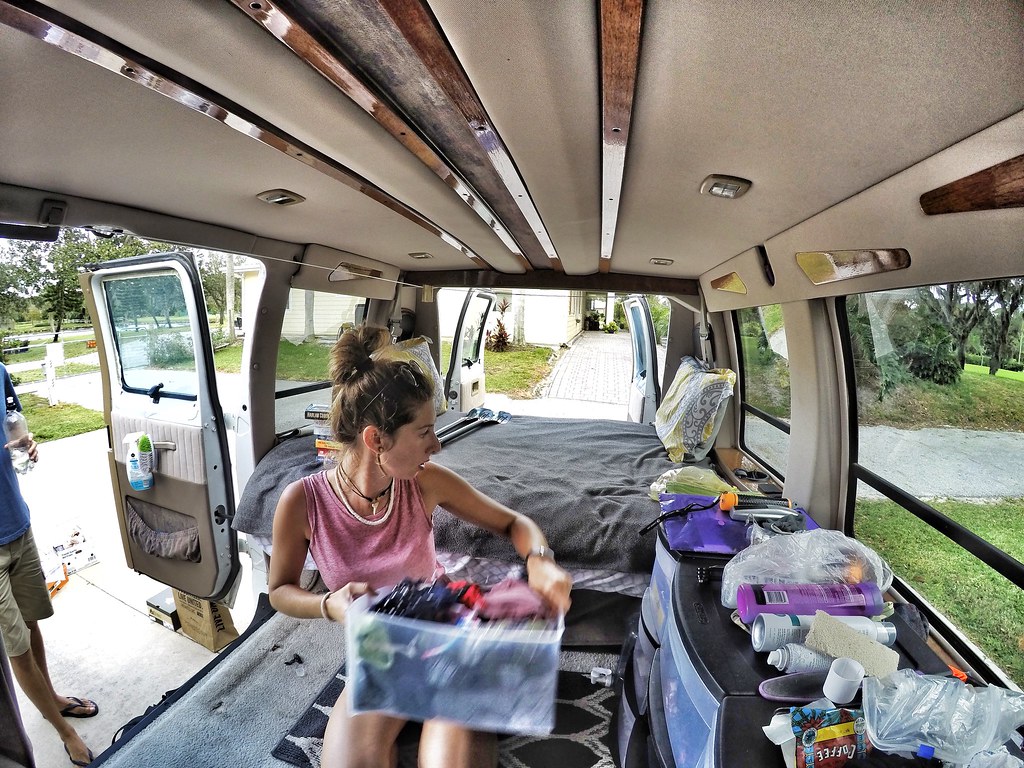 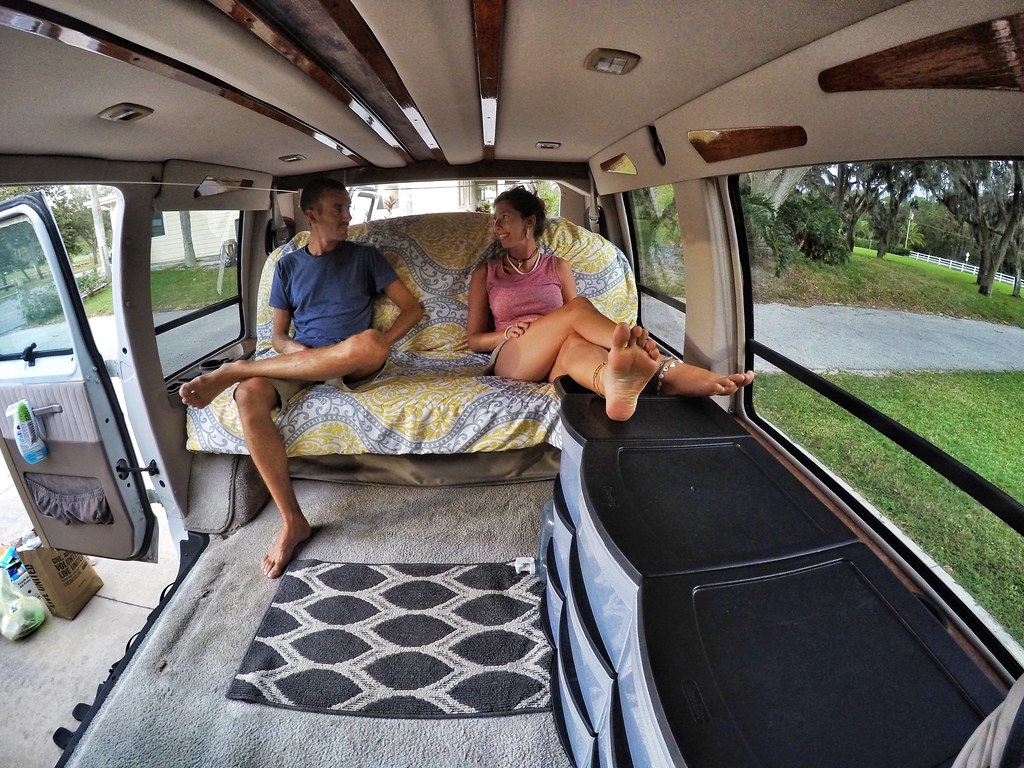 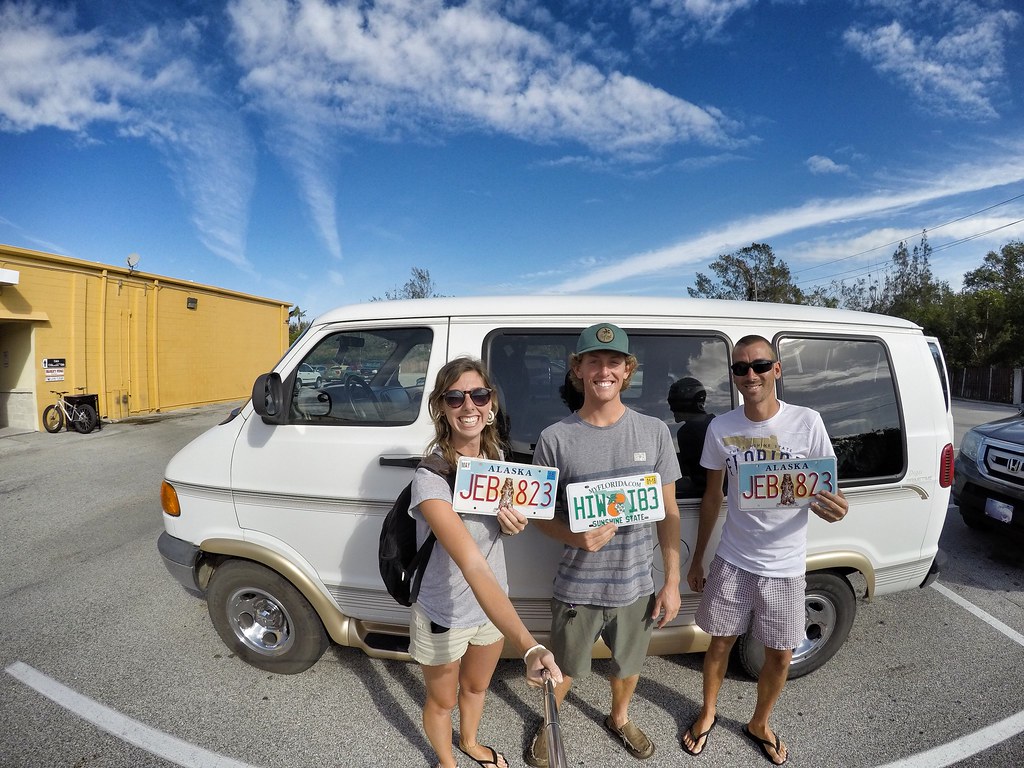 On the plus side we now had a full size bed, running water, fridge, oven….it’s amazing what you can live without, but we were happy to have these things in our life again. Tony and Jan arranged for us to borrow their friends paddle boards which was great fun. Beth, the lovely owner of the boards lived on a beautiful canal-side property with a deep turquoise pool just a few meters from the canal. We set off and had been told we’d likely see manatees and dolphins. We had a board each so I actually had to paddle for myself this time. We went past mansions with greek style pillars and huge glass windows, some properties even had outside lounges with tv’s. We followed a narrow waterway surrounded by mangroves through Samson island. The water was flat like glass and after having to crouch under a wooden bar to enter I remained on my knees to save myself from ducking for tree branches. It was a little eery through the mangroves as it looked like the perfect habitat for alligators. We came to an opening and saw some movement in the water. Then all we could see was the animals footprint, three sort of mirrored circles on the surface of the water. After a little panic about whether or not an alligator had just swam under our boards Craig spotted a manatees nose rise out the water and vanish into the murkiness. The manatee headed out into the large, brown, Banana River. It was a huge area of water and I did not want to fall off my board there. 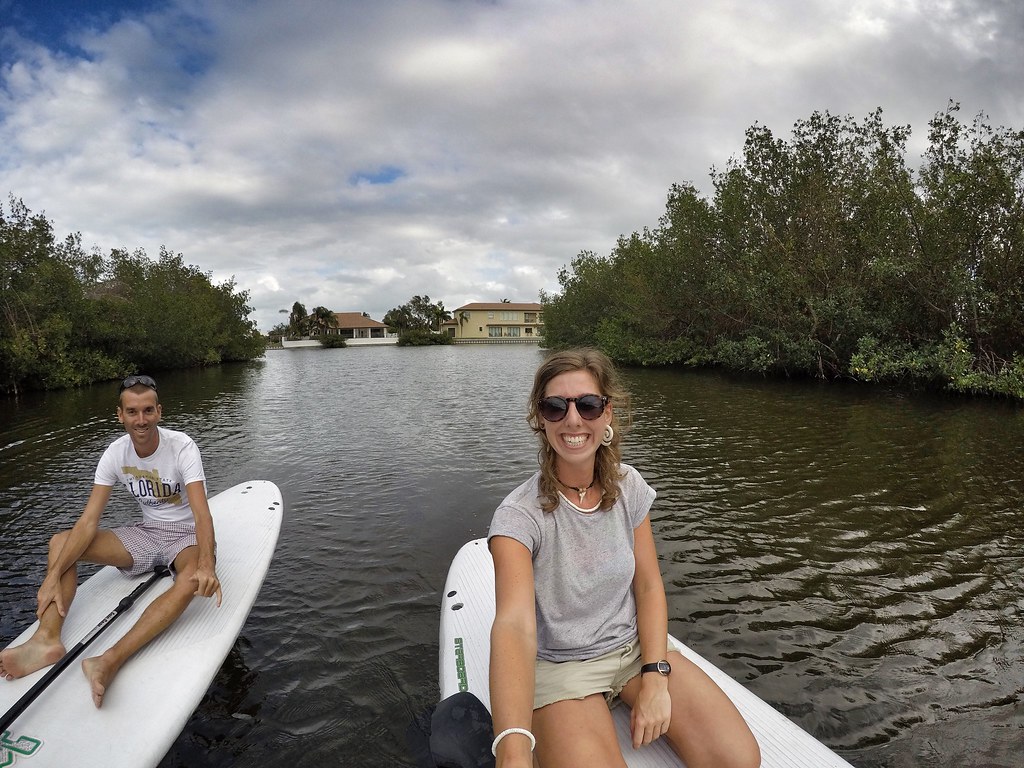 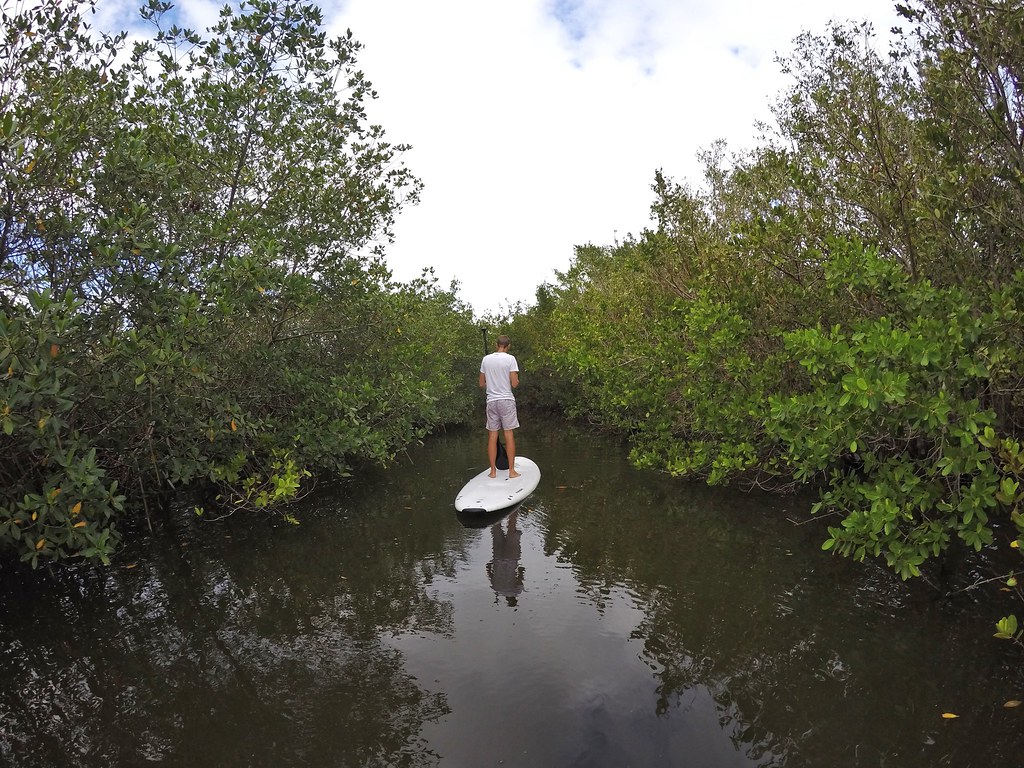 It was easier paddling on the flatter canals so we headed back a different route but still hadn’t seen any dolphins. Luckily the Dolphins decided at that very moment to come out and say hi. We saw their fins rise out the water so we spun around, paddled a bit and realised they were coming our way. The next time they came up for air they were way behind us. They were such quick swimmers!! It was just two to begin with and then I heard the blow of air to my left and another one appeared. It was a bit like an arcade game where something jumps out a random box and you have to hit it on its head. Of course we weren’t hitting the dolphins but they kept surprising us where they would come out next. The Dolphins seemed to like fishing along the walls of the canal, and we could track exactly where the dolphin was as a wave would flow along the edge of the wall following the animal. It was amazing seeing them fishing right by us, the manatees were very hard to see in the dark water whereas the Dolphins showed half their bodies as they surfaced for air, curving their shiny bodies and showing us their pointy, smiley faces. It was really exciting seeing them so close to us and the funny thing was the closest encounters were right outside Beth’s house. Imagine having dolphins literally in your back yard! 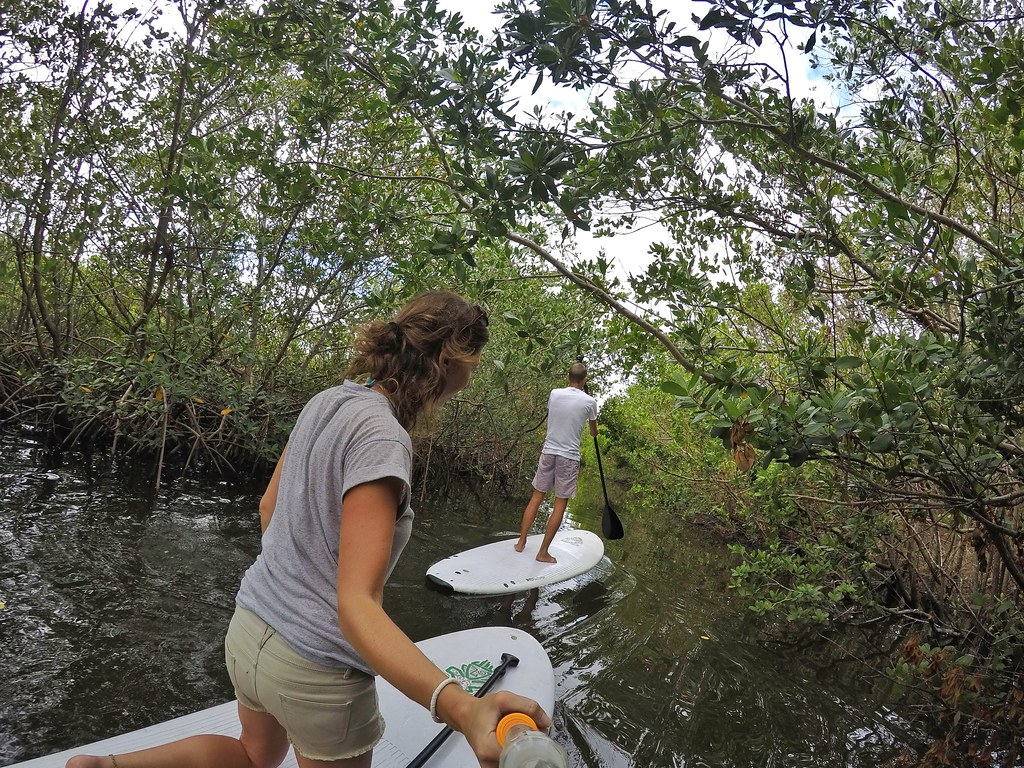 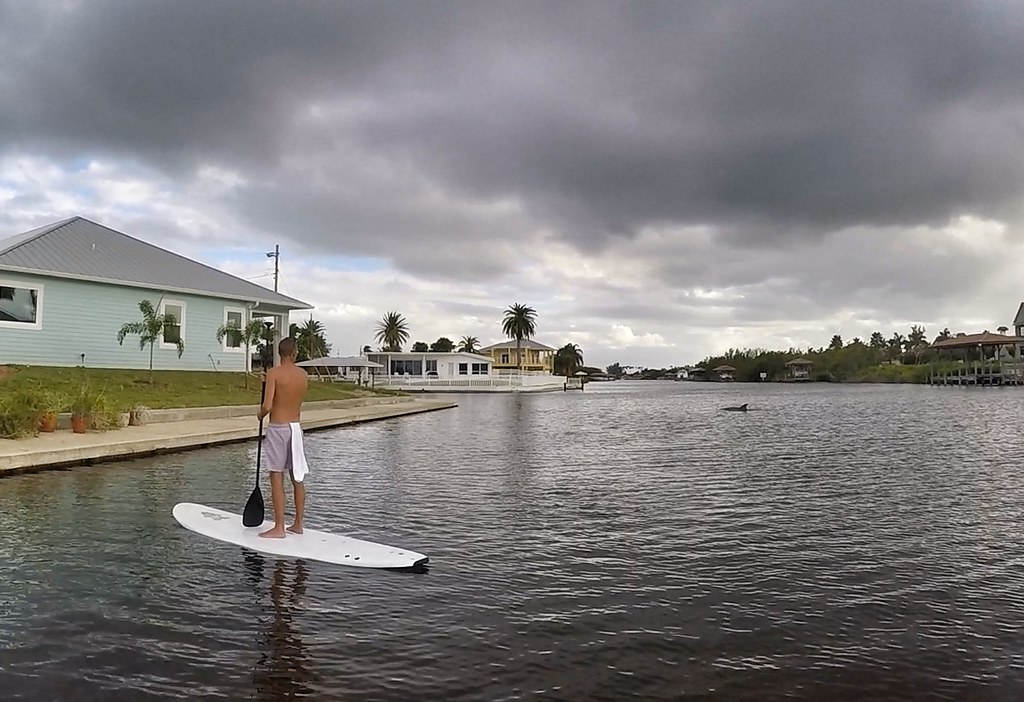 The next day Tony drove us north to the Merritt island national wildlife refuge. He took us on the Black Point wildlife drive which is like a drive-through zoo, but in the wild and with no fences. I was delighted to finally see the Roseate Spoonbill birds I’ve been hoping to see throughout Florida. Their basically like flamingos but with a funny spoon style beak. They were so beautiful with a white top and pink bottom, like their feathers were bleaching in the sun. As they opened their wings and flew away they revealed the fluorescent pink colour on the under side of their wings. I was so happy I got to see them. We continued on the Floridian safari, passing numerous other big birds like great herons and anhingas drying their wings off. We were surprised not to see any alligators as we were nearing the end of the drive and right on cue there was a big one resting in the sunshine on a little island. It was the largest alligator we’ve seen so far and about 10-11ft long. The nature reserve was teaming with life thanks to the wetland so it was a great place to see a variety of Floridian wildlife. Afterwards we drove to the Canaveral seashore which was our first glimpse of Americas Atlantic coastline. It was quite the contrast to the calm Gulf Coast. This side was wild, rolling waves, surfers, sand flies and not a deck chair in sight…maybe the sand flies put people off. But it was very beautiful nonetheless. 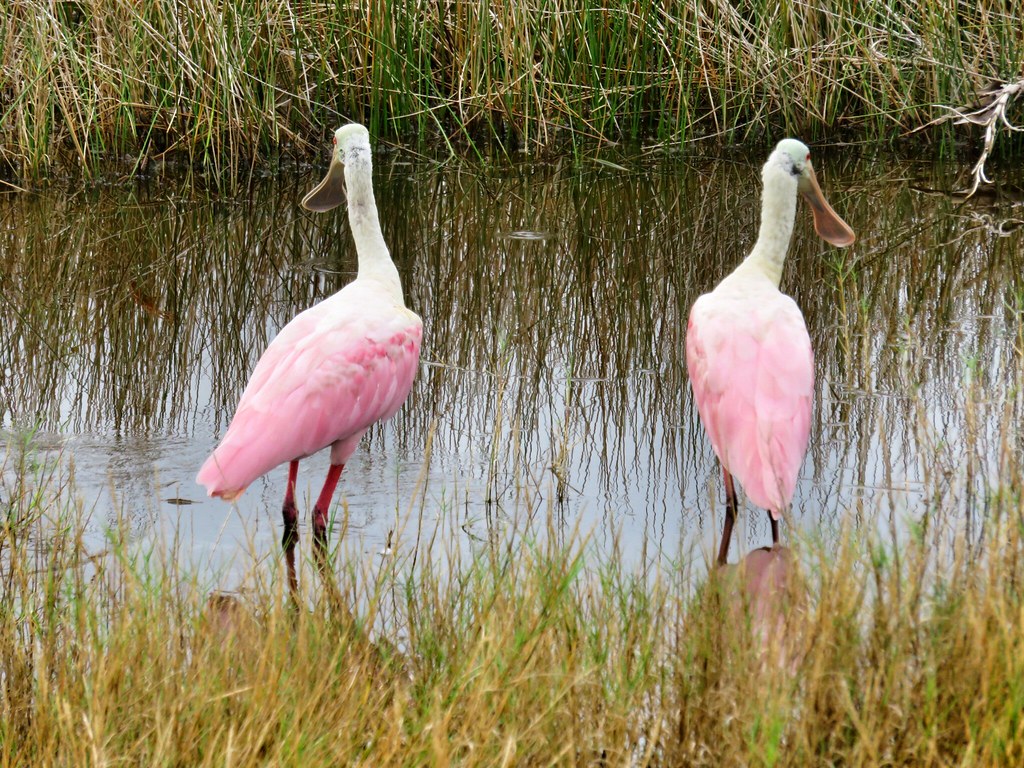 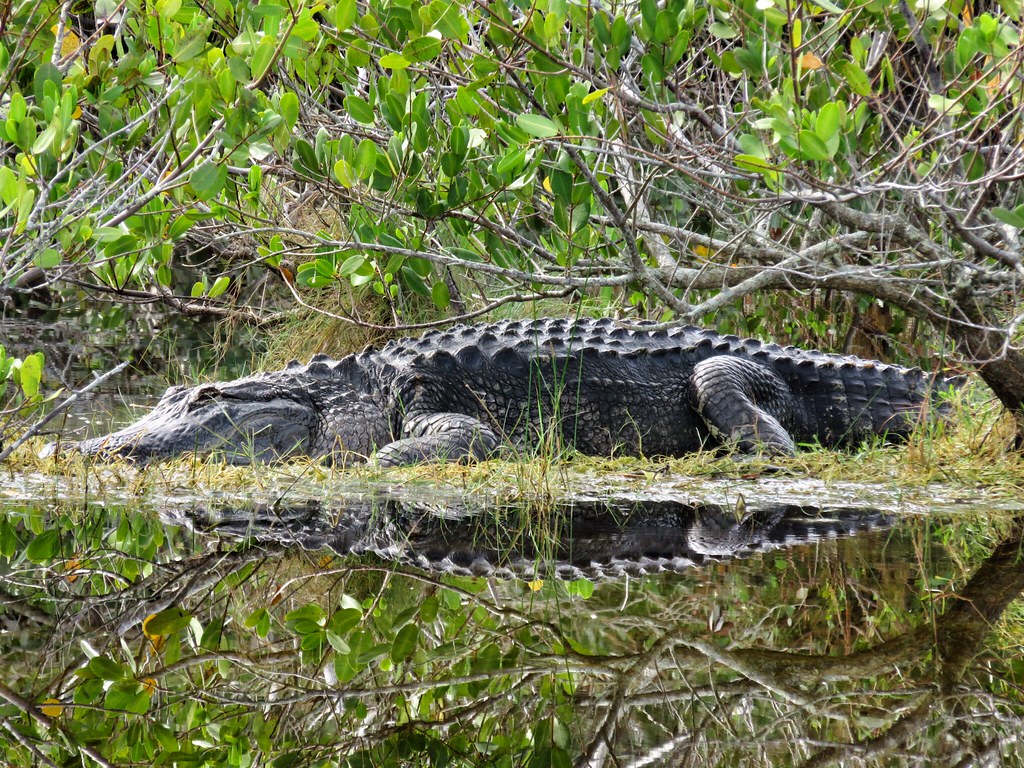 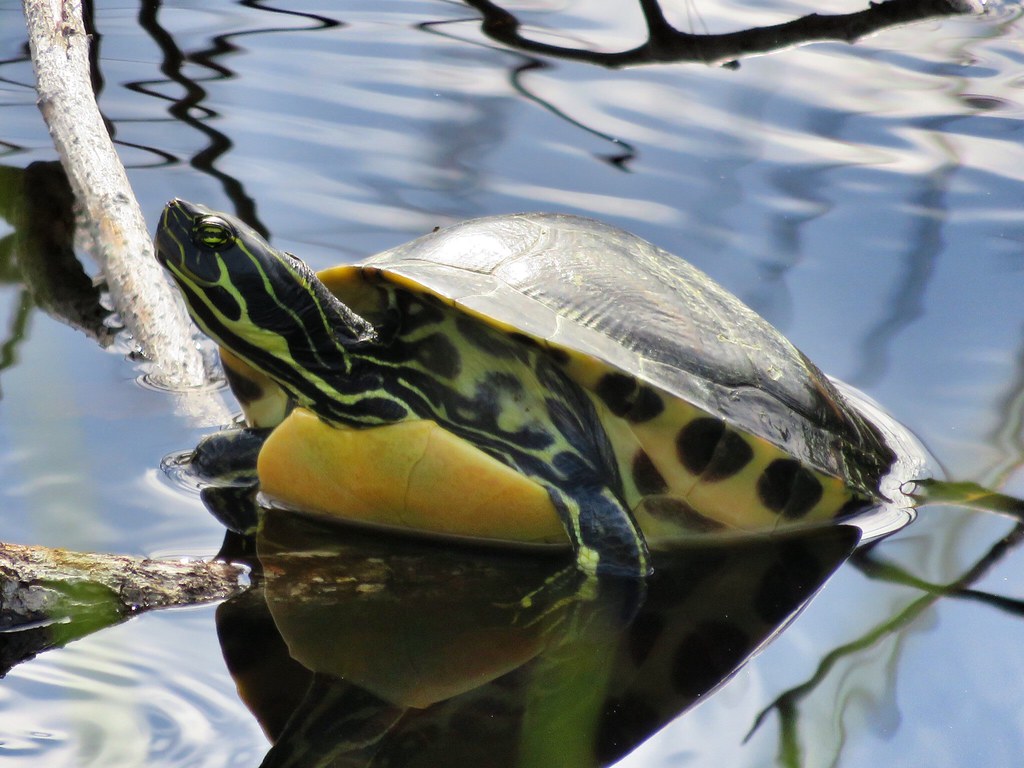 For our final day we had to have a swim in the pool and sunbath in the beautiful garden. We played with the dogs lots who were adorable and quickly revealed their characters and quirks to us. One was obsessed with the game fetch while the other wanted non stop affection. They were super friendly and a joy to be around. After a few lovely days staying in paradise we were given a ride to the greyhound station to get a bus south to Fort Lauderdale. I’ve never caught a greyhound before but I can tell you that I’ve been on fancier buses in poorer countries. 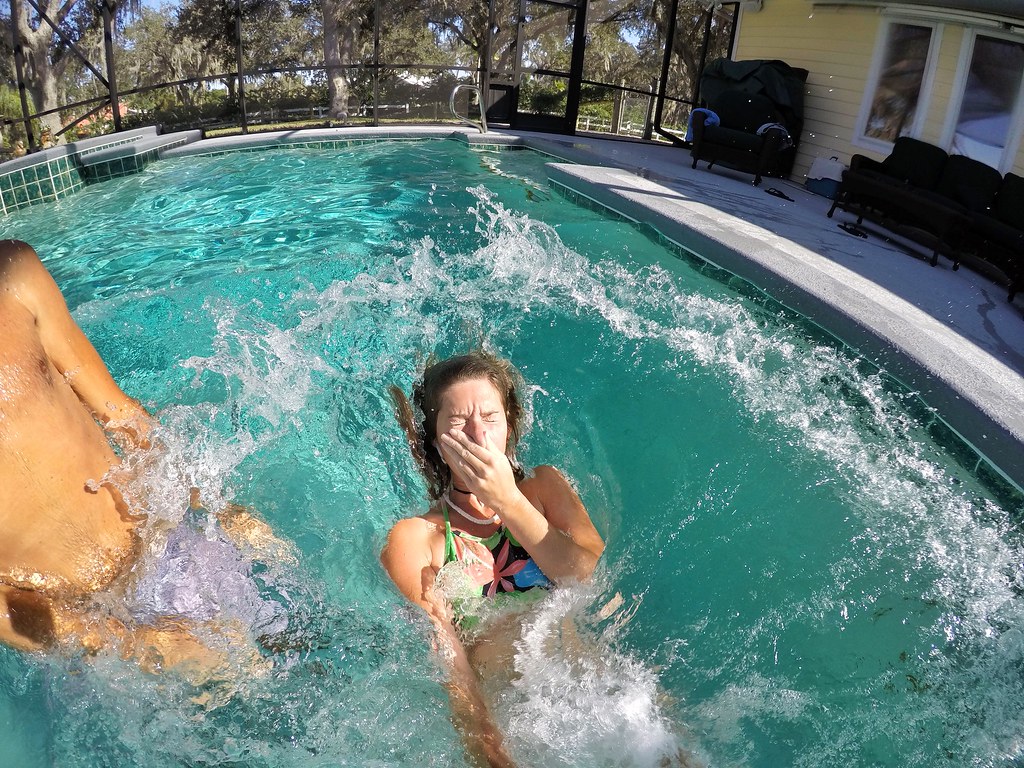 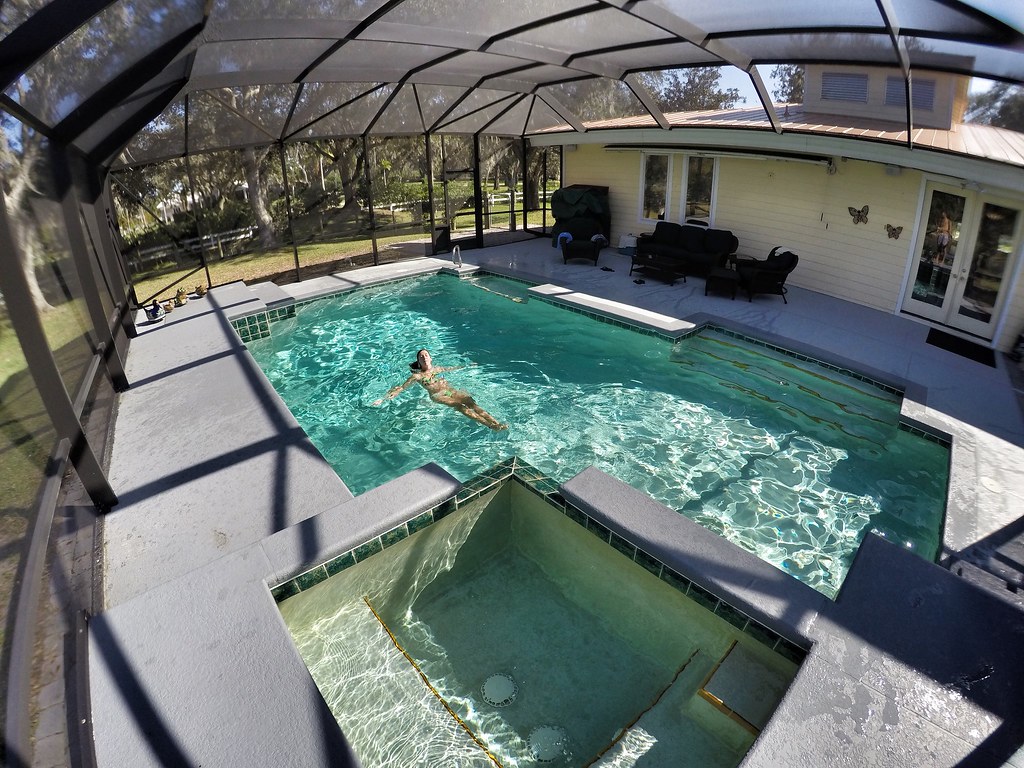 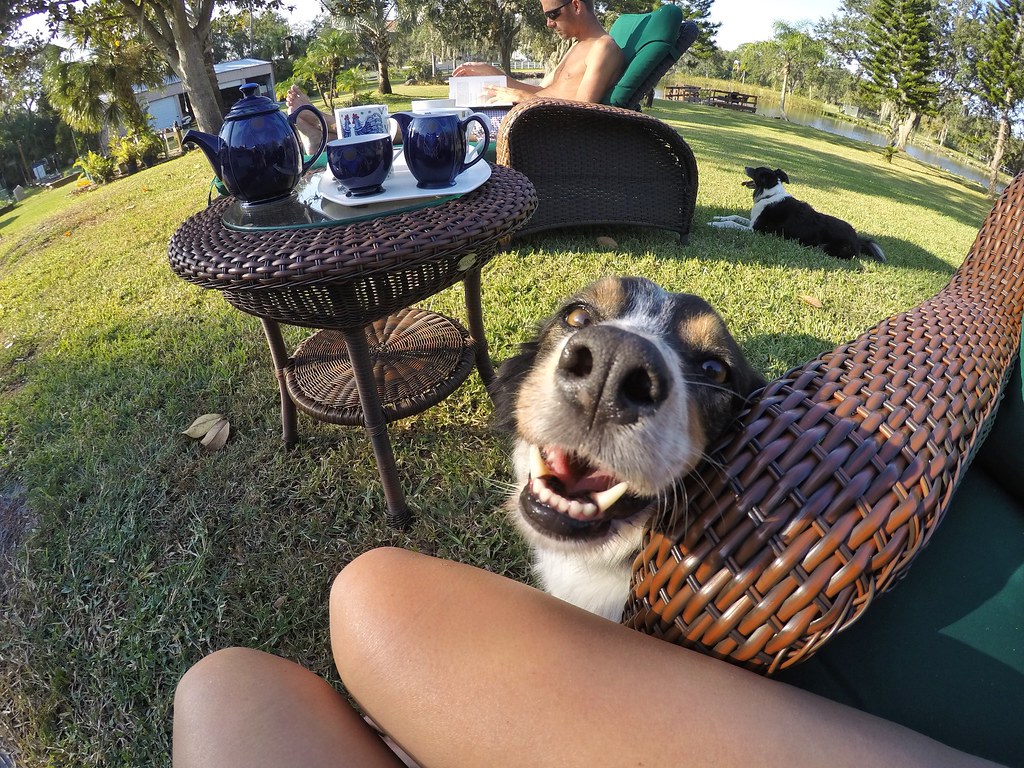