The all American road leading through the Florida Keys looks spectacular from the sky. I’ve only googled that mind you but as soon as I saw the photos of the road I declared that we had to drive the legendary route. It actually wasn’t as spectacular to drive as we’d hoped. The bridges were extremely impressive, one of which spanned 7 miles across the sea, but the sea didn’t change colours much or look particularly ‘tropical’ it was just like driving over any bridge looking across any sea. Sure it beats a horrible motorway and high rises all around but we didn’t rate it as a highlight roadtrip. 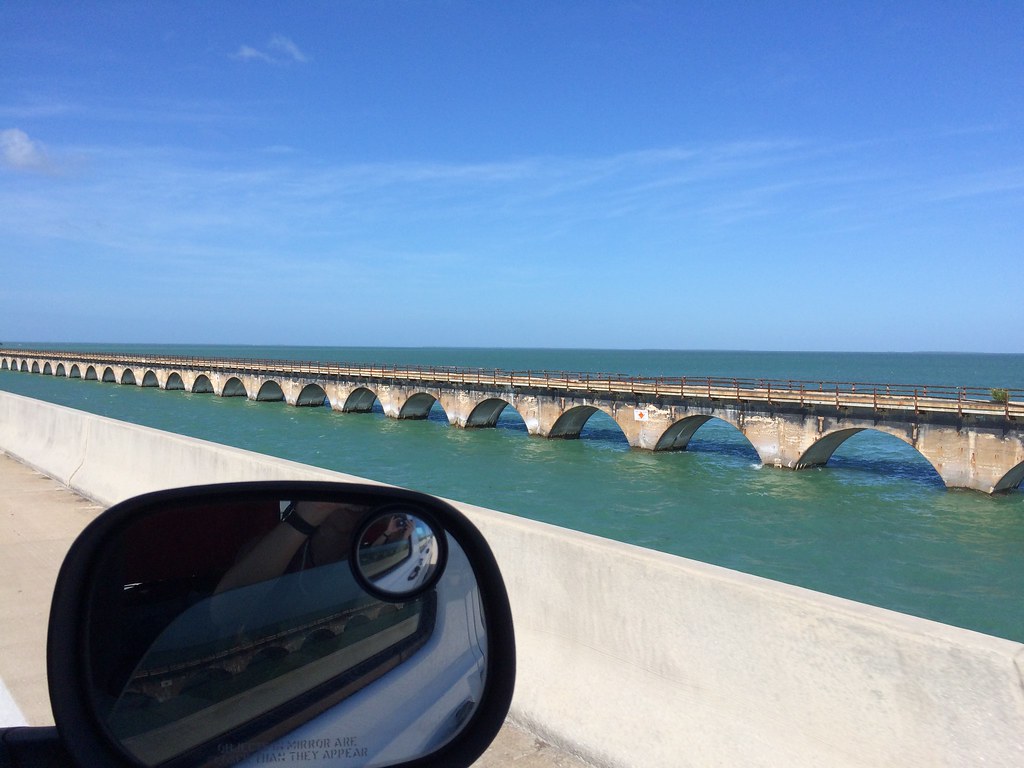 While driving through the Keys we saw some things we hadn’t expected to see; wild alligators was one of them, and the other was the Key Deer, known as the smallest breed of deer in the world and an endangered species. The deer live on Big Pine Key and are wild so we were shocked when a volunteer told us that the residential area was a good place to see them as the locals feed them. We managed to see a female grazing in some woods near a path. They only grow to about 2ft tall and looked like baby deer with huge eyes like polished conkers. A male deer crossed the road in front of us and had an adorable little rack atop his head. As soon as we stopped to photograph him he came over to us clearly expecting food but leaving when he realised we weren’t playing his game. 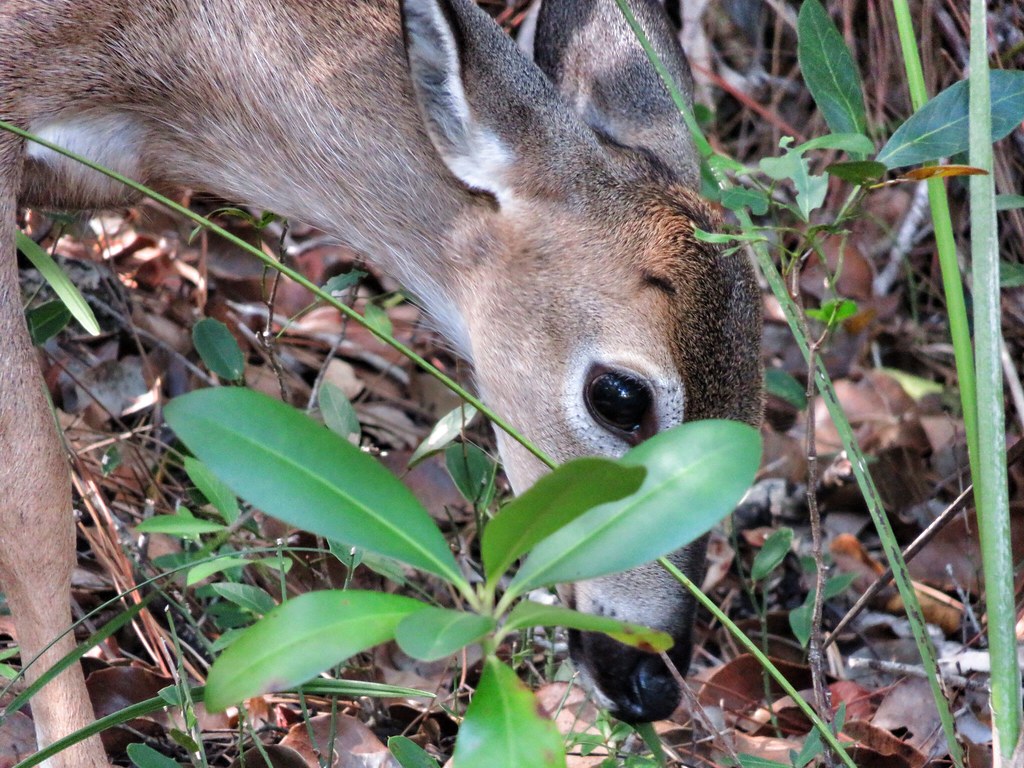 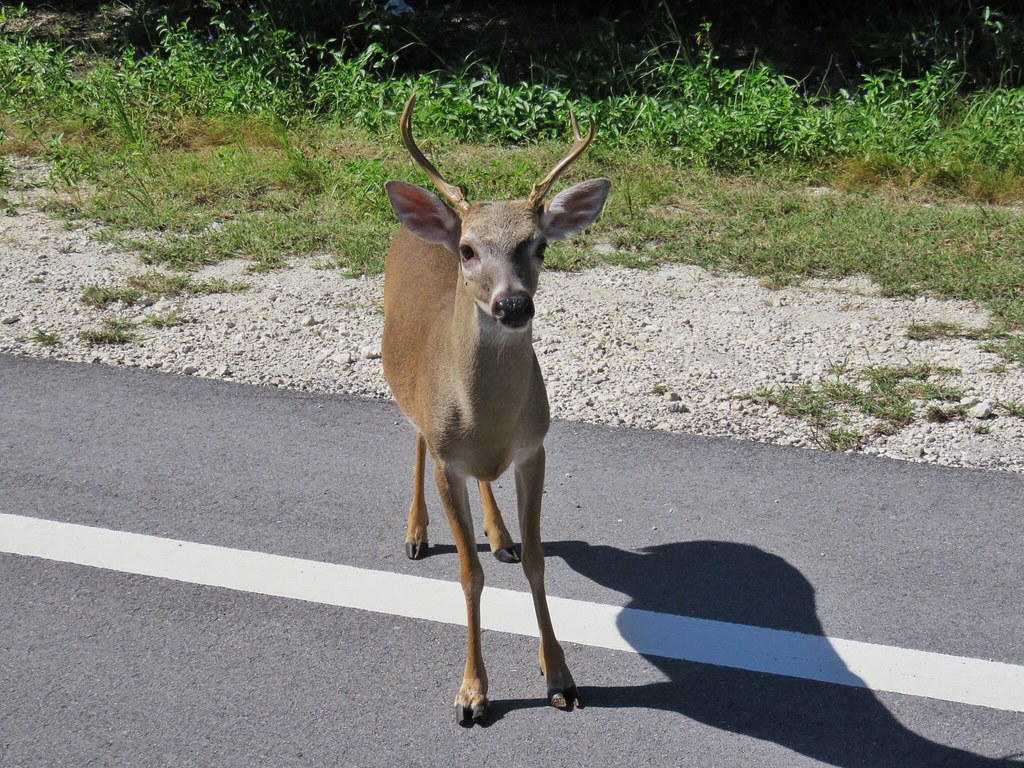 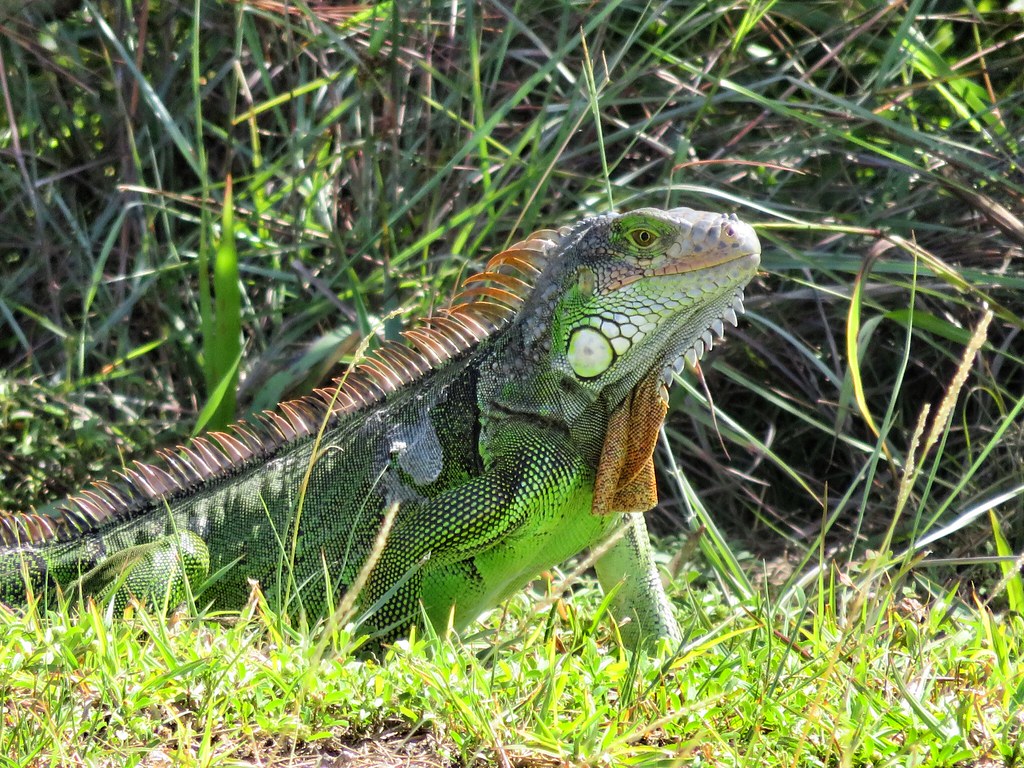 We continued on the road until we reached the final island, Key West. We managed to park along a residential street and spent the rest of the day wondering around the town. It was actually quite pretty with lots of beautiful white wooden homes with balconies, swing chairs and lots of tropical foliage. We wondered around the historic seaport area with bustling bars and a variety of boats moored up. One bar invited us in for a promotional taste of free rum…we usually come running when someone says ‘free’ but I wish we hadn’t this time. My idea of tasty rum is Malibu and Coke. I know it’s not ‘rum’ from a connoisseurs point of view but it’s sweet and tasty and I like it. The stuff we tried however was served at room temperate and I felt like flames would come out my mouth after tasting it. Craig didn’t mind it so tried the maple variety too while I looked in the reflection of the sellers sunglasses at my green face. 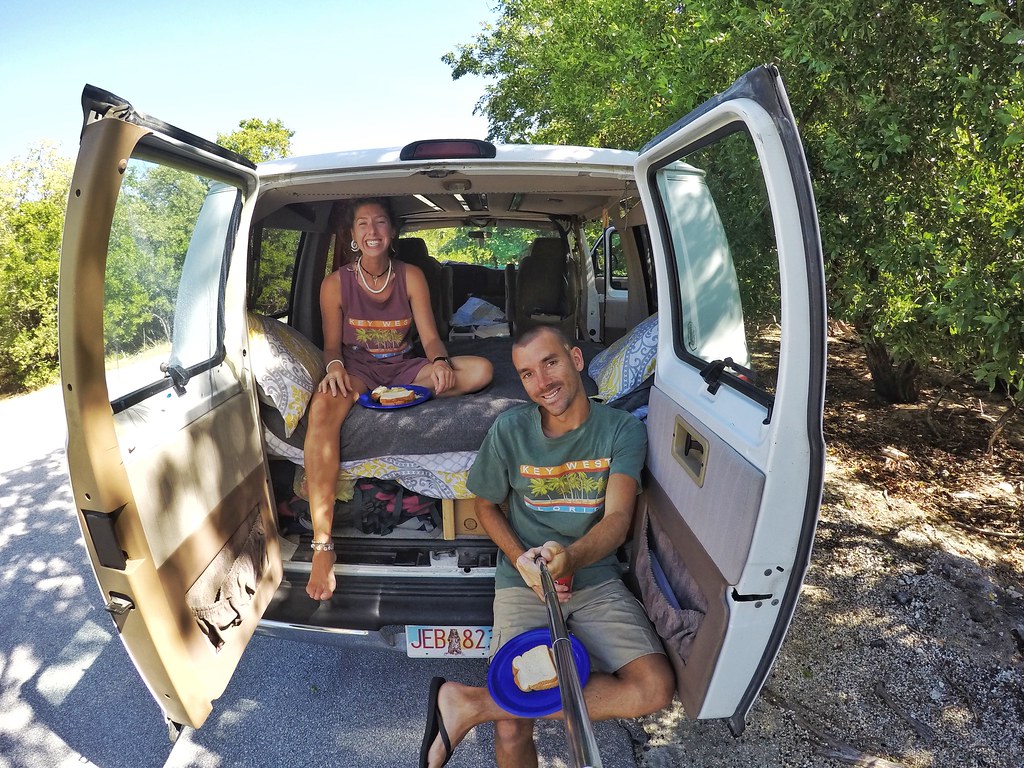 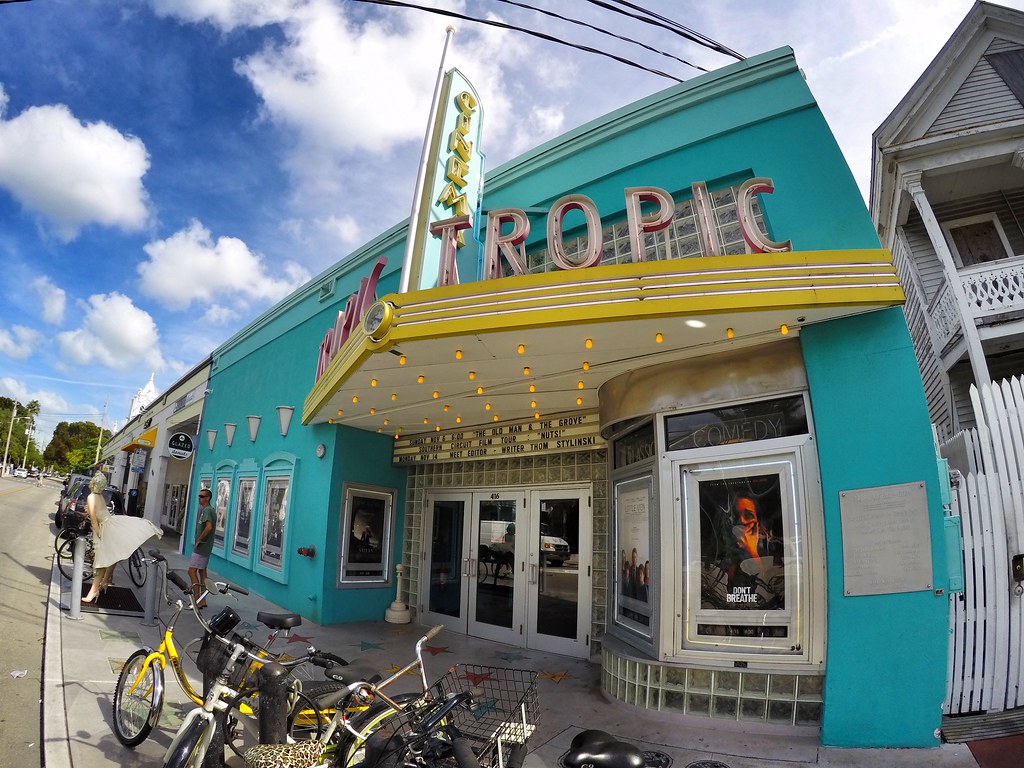 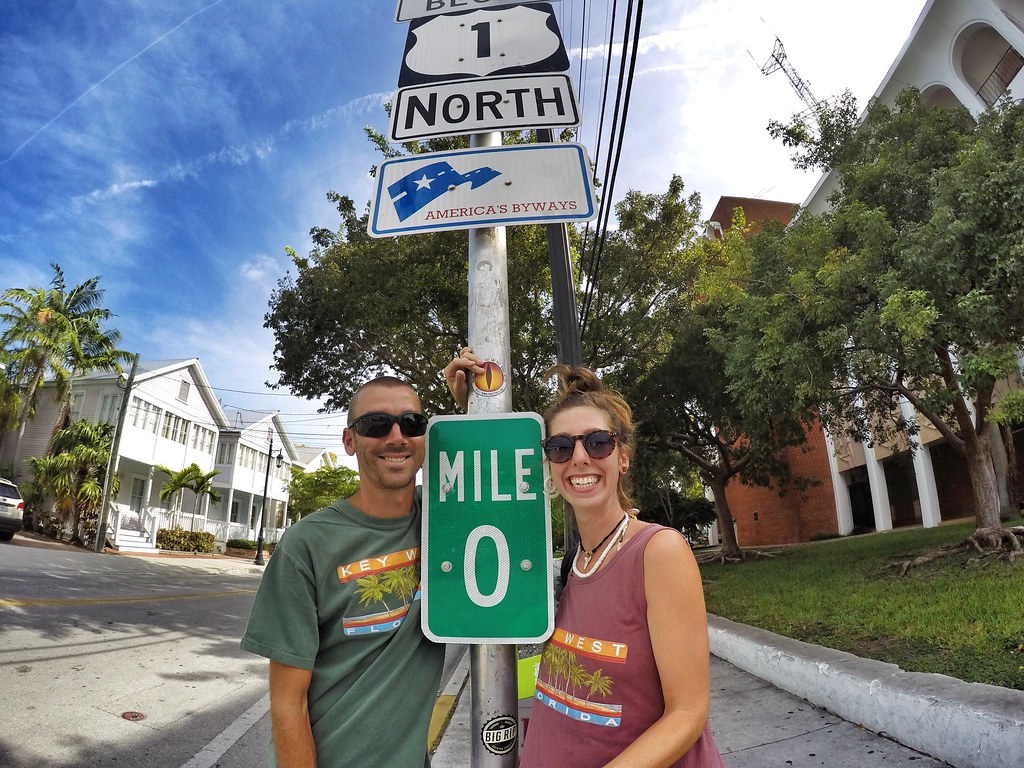 There were a few cheesy things we had to do in Key West, the first of which was visit the mile marker 0 sign which marks the end of Highway 1 and sort of the end of this roadtrip for us. Alaska to mile marker 0! So we took lots of selfies there, and then we passed a pretty ‘End of the rainbow’ sign and Craig rolled his eyes knowing I’d want to take another selfie of us there. This sign was placed under a huge Kapok Tree. It was a bizarre tree, native to Central and South America and Asia too. Every 5-10 years flowers bloom at night time on the tree and emit an awful smell which attracts bats. We left the crowds and walked the quiet streets to reach the most southerly point on the continental USA. On the way we passed lots of roosters just hanging out on any grass verge they could find, and even a hen with a brood of fluffy chicks. Key West really had an island vibe with chickens on the loose. The Southerly point was anti-climatic with a queue of people waiting for a photo where the sun glared and ruined the photo. On the plus side we were standing only 90 miles from Cuba, so we were closer to Cuba than we were Miami. We were getting pretty hot walking around so headed to the nearby South Beach and couldn’t help but look at the beach like it was a piece of shit on our shoes. It was a tiny beach and packed full of sun-loungers, each one sitting a tourist that was either as white as paper or as red as a lobster. The sea was choppy, murky and un-inviting, Brighton sea back home was more of an appealing place for a swim so we headed off, sweaty and disappointed. 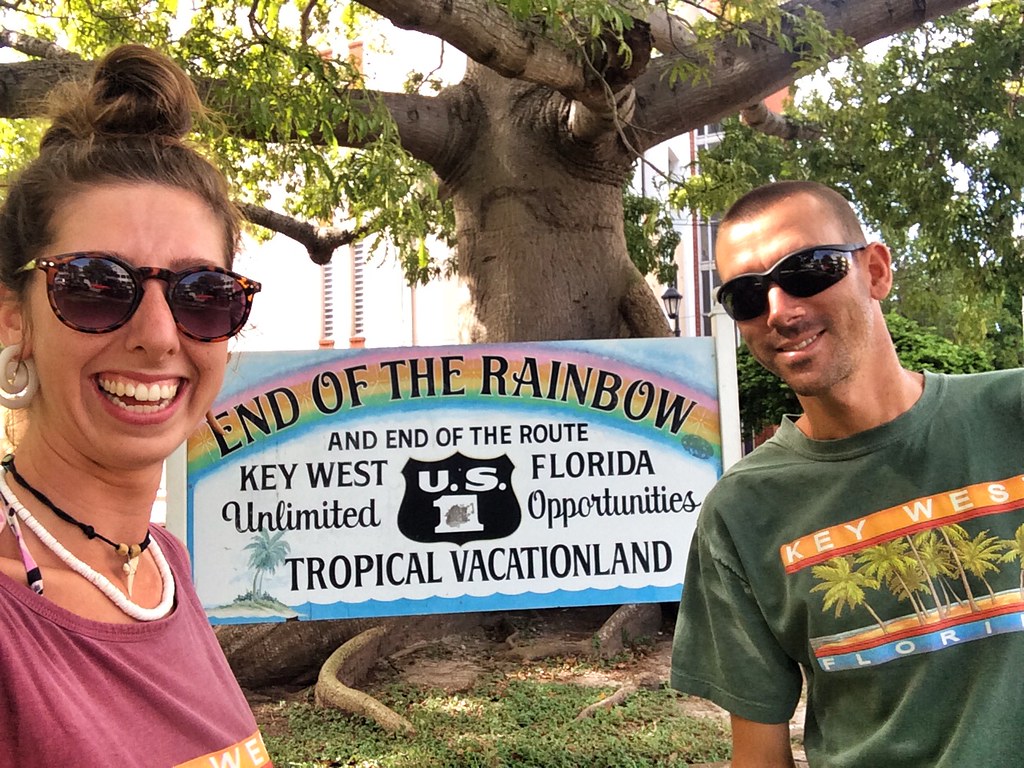 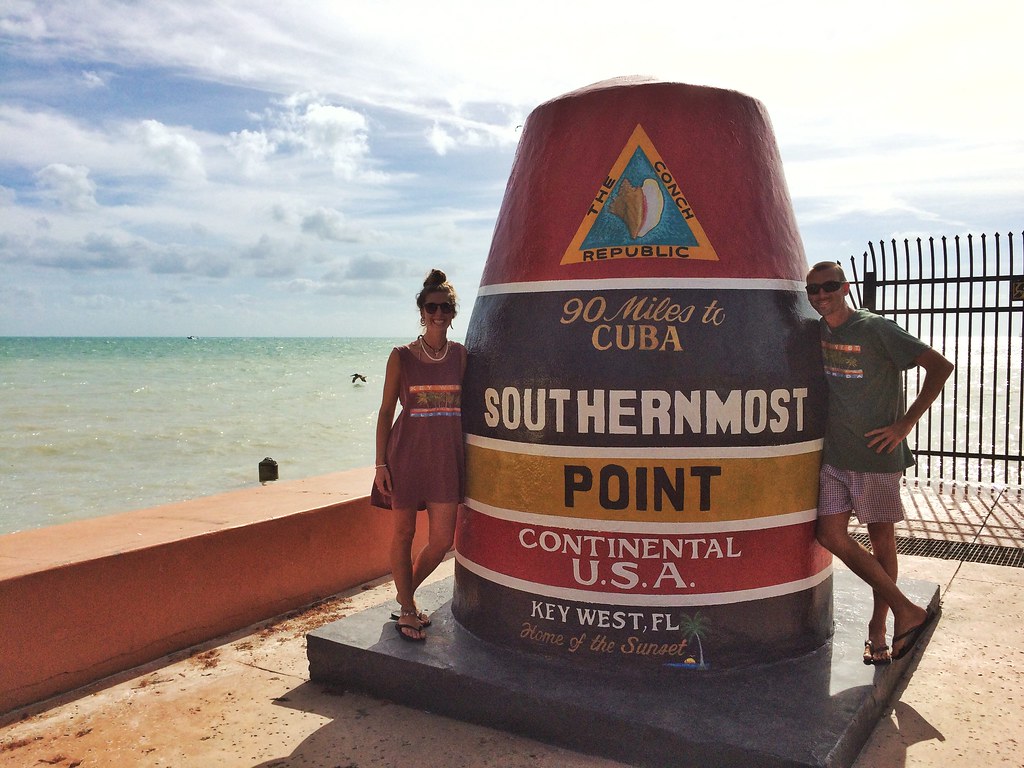 We tried the famous key lime pie which was delicious, zingy and sweet. The only bad thing about it was that it was served by the grumpiest lady. I don’t know what it is about Florida but a lot of people dealing with tourists do not enjoy their jobs and aren’t afraid to show it…especially the grumpy visitor centre workers. Anyway, I wish the pie had a slice of lime on it or a sprig of mint to pretty it up. We did enjoy a drink in the Bahama Village which was a very popular bar surrounded by locals who’d had a few too many and listening to a guy jamming on his guitar. 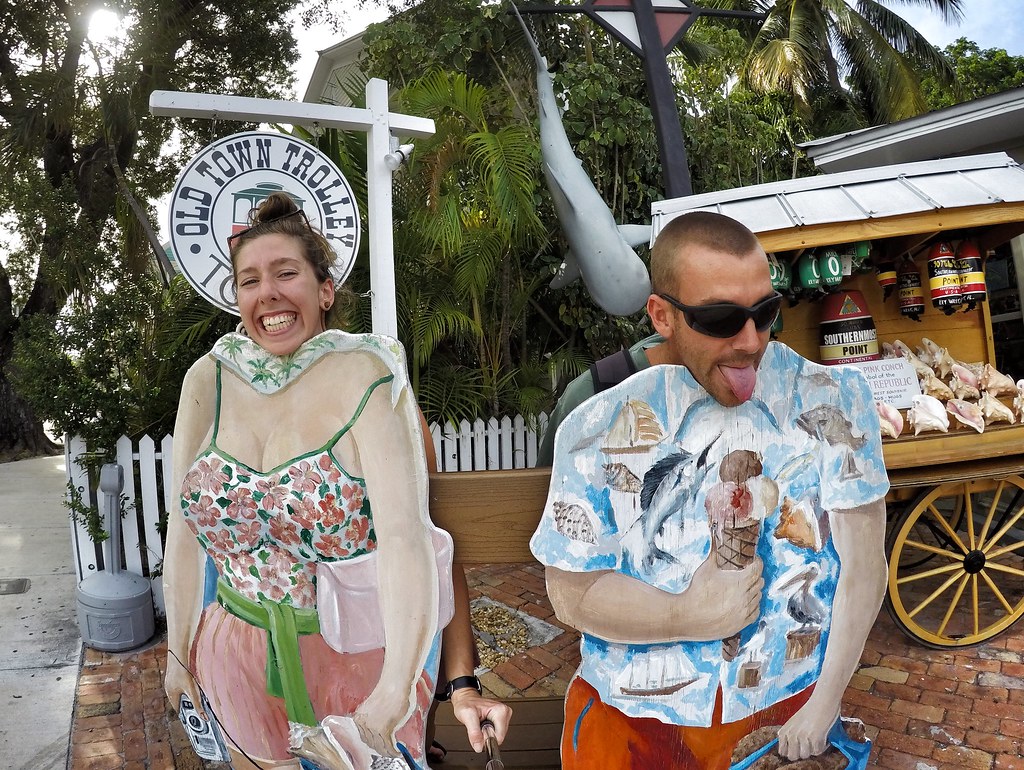 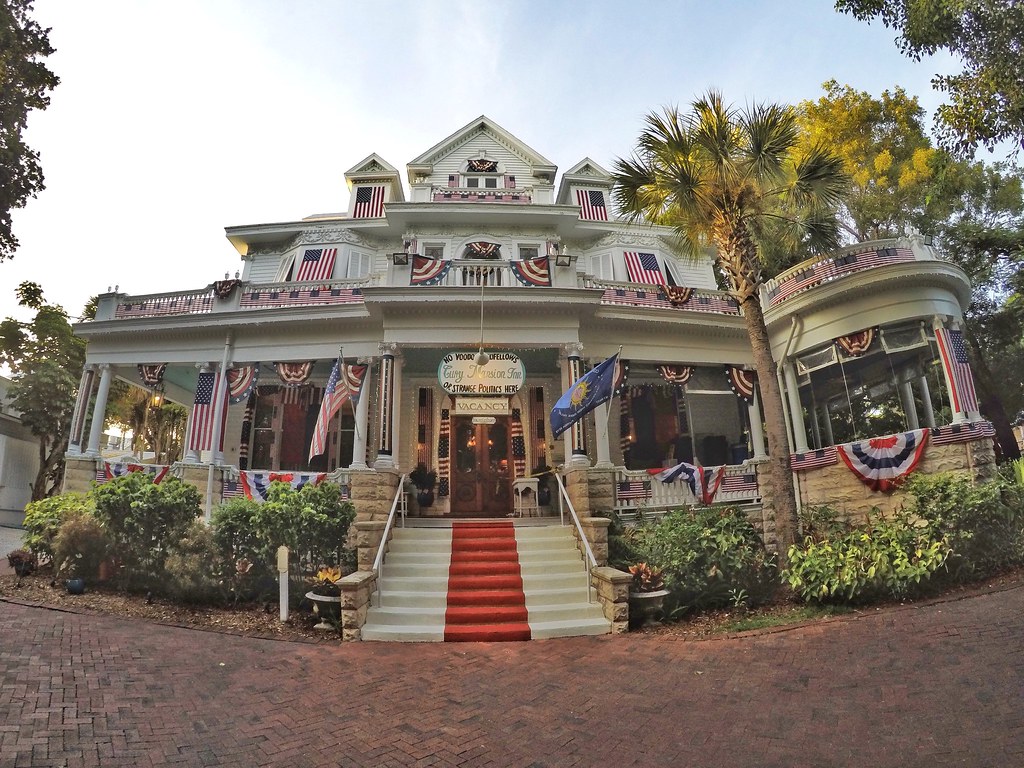 Just before sunset we went to Mallory Square. The whole waterfront walk leading to the square was chocker-block with tourists awaiting the setting sun. The area was alive with street performers too with a broad spectrum of quality amongst the musicians – good or shit. One guy used his dog to win over the crowd, who was cleverly trained to collect tips in his mouth and put them in a bucket. A lady was dressed as a mermaid holding a ukulele which she didn’t know how to play. I quite liked it when people tipped her because she’d have to stand up and shuffle along in her mermaid suit to her bucket so she could put a shell on the money so it didn’t blow away. We also witnessed one of the worst street performers we’ve ever seen; it was a crazy French man who wasn’t humorous in the slightest so just screamed and laughed to encourage people to join in and I felt so uncomfortable with the awkward silence from the crowd. He basically trained his cats to jump from one pole to the next, through tunnels and flaming hoops. I don’t think the cats appreciated their talents being used to make money for their lunatic owner. 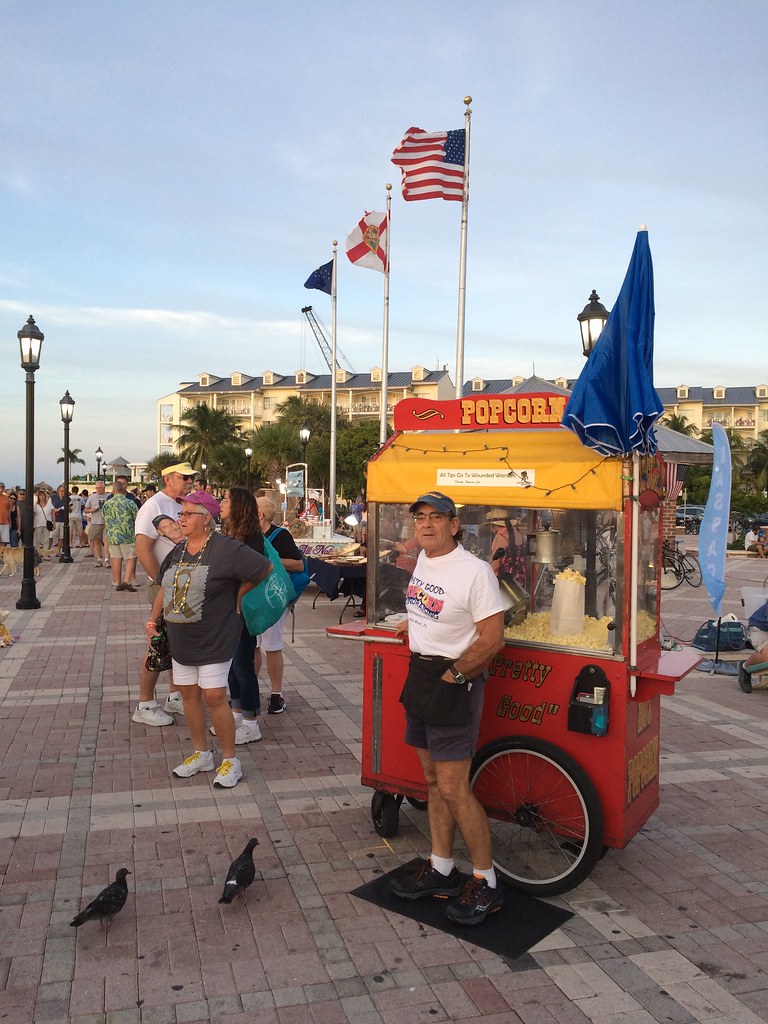 On the plus side we had a cracking sunset which marked the end of our day on Key West. As we wondered back to Daphne we passed a Cuban restaurant with live music that was so good we stopped in our stride to listen a while. Boy could these guys shake their maracas! 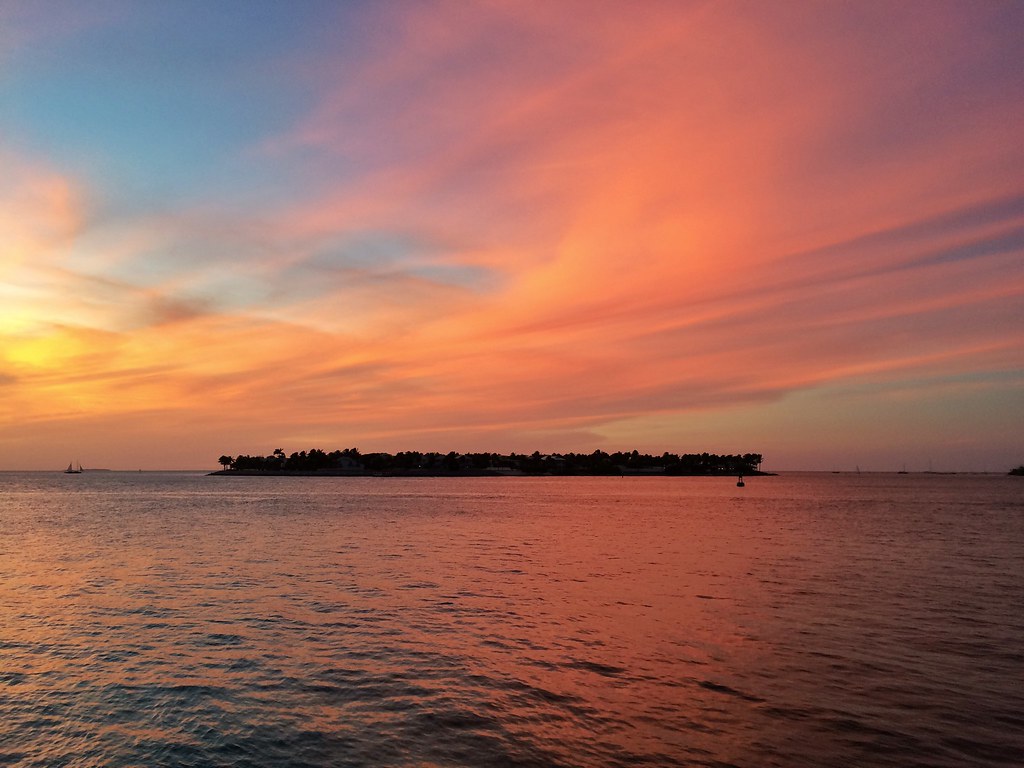 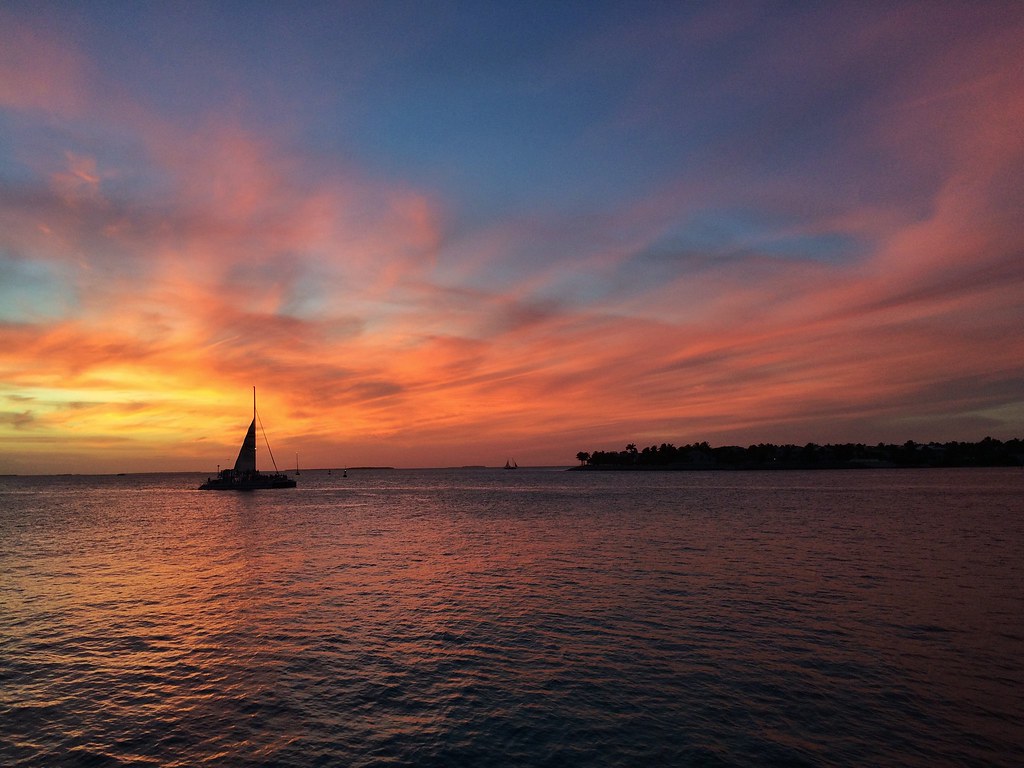 We left Key West and drove a big chunk back north in the dark until we found an area with some trucks parked up where we could free camp for the night. We actually hid behind one truck and had the sea on the other side. We woke up the next day in paradise; sea views from our home on wheels and palm trees all around! 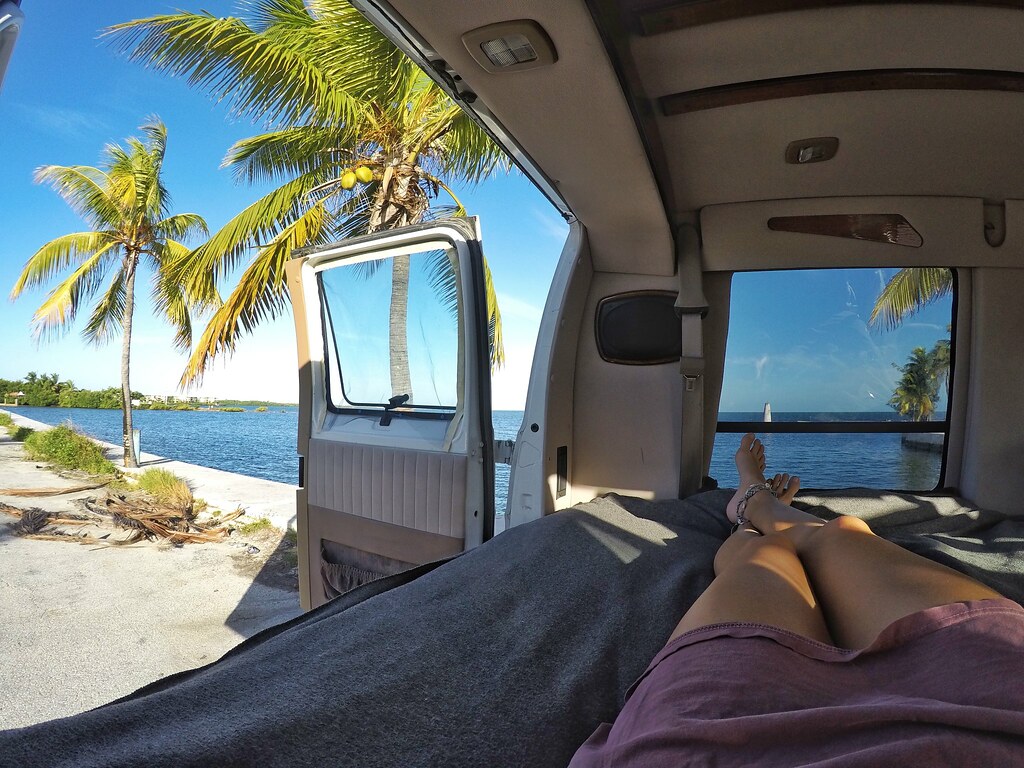 For our final day we wanted to chill at a beach and let me tell you – don’t expect beaches when you come to the Keys!! It’s really not known for them but we did find one good’n and that was Sombrero Beach, an absolute stunner with three curved bays. It was quite a treat as all the beaches we’ve seen in Florida have been one long straight beach which lacks any character or beauty in my opinion. Sombrero was actually man made but looked 100% natural to us. We took our camp chairs down and picked one of the only patches of shade under a palm tree. The sea wasn’t crystal clear but it was calm and warm and the white sand, curvaceous beach and curious iguanas made up for it. We spent the whole day at the beach circumnavigating the palm tree to stay under its shady leaves. It wasn’t the most bushy of palm tree so we were occasionally cooking in the sun and our skin turned from a nice Latino glow to the colour of embarrassment. We were enjoying the peace and tranquility until two retired couples arrived at the beach and realised they were both from Maryland. So they decided to pitch up their homes, I mean jumbo umbrellas right in front of us. Not a big deal as in thirty minutes I’m moving with my palm tree, but then they began unloading their beach buggy. Out came a cool box, clothes, chairs, the kitchen sink…. And then, a boom box. Are you for real?! That is such bad beach etiquette!! So we spent the next three hours with a view of their marquees, which by the way they didn’t even sit under, it was just a shade cover for their cool box!!! So we’re listening to their shit music while they spend a lifetime away from the music and floating in the salt water talking to their new friends about people they may or may not know in Maryland. I kept telling Craig I was on the verge of getting up and pressing stop on their boom box, like an angry mum that arrives home to find their kids have had a house party. Other than that we loved Sombrero beach…if only their was another palm tree to get some shade under and escape the music. 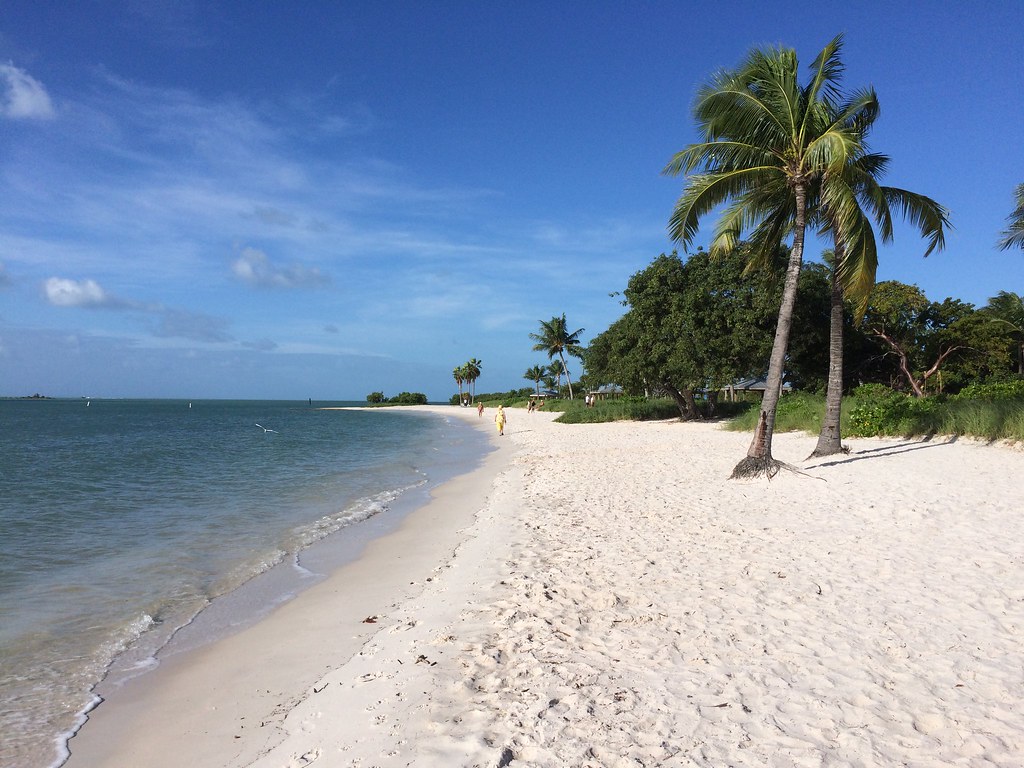 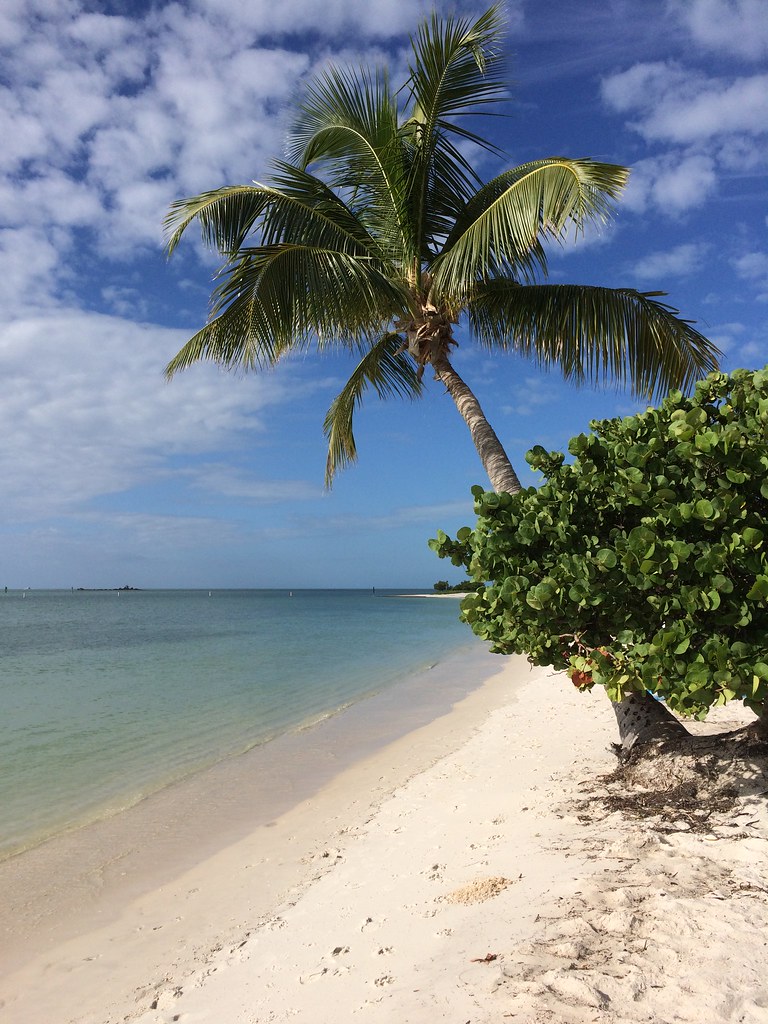