The Florida Keys marked the end of the road for us on this 14,000 mile roadtrip. The Keys are a string of little islands connected by bridges that head south west towards Cuba. It looked like an incredible drive and we were excited to see it for ourselves. The first island we reached was Key Largo; one of the Keys top diving and snorkelling locations thanks to the protected marine sanctuary.

We decided to go snorkelling so checked in at the port where we were greeted by a worker in full sales mode. Out of nowhere she said to me “your tiny!” then she turned and walked off which I thought was the most bizarre way to have a conversation with someone. She came back with a wetsuit “your gonna need this!!” We were totally happy going without wetsuits but she called us ‘crazy’ in a last try to get $20 out of us. No one rented wetsuits but every staff member made an effort to up sell them “HAS EVERYONE GOT THEIR WETSUITS? There are none on board so you will need to get them now!!” 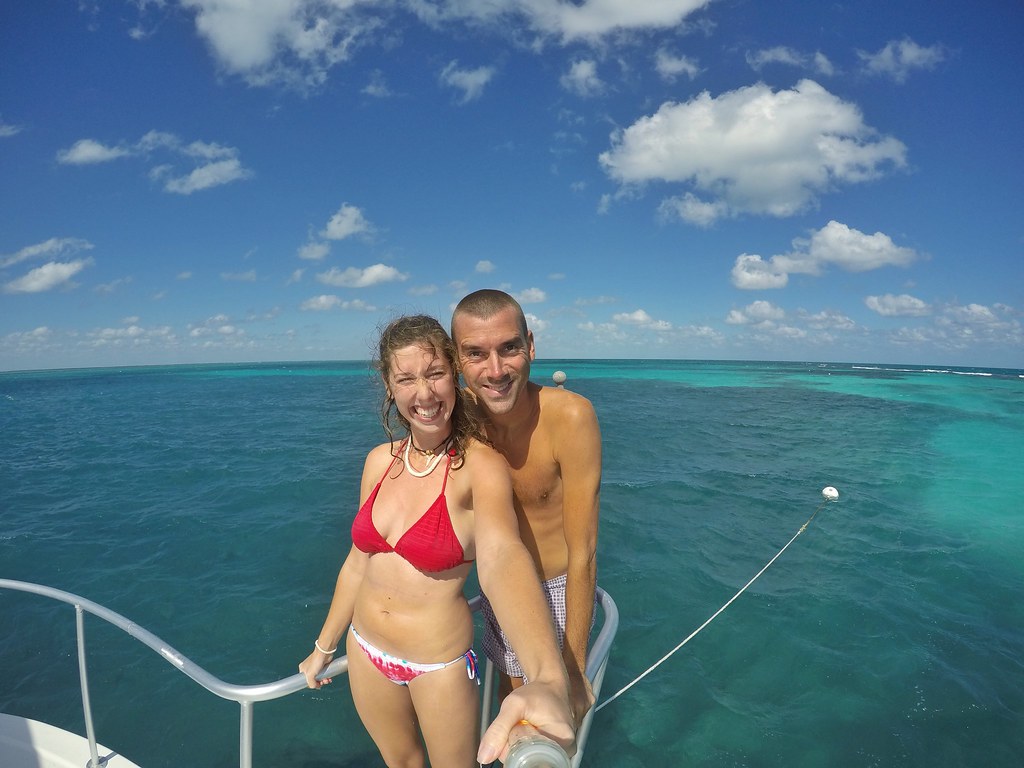 The boat wasn’t even a quarter full, so it was nice and peaceful for us. We slowly exited the canals and entered the open sea. It was a windy day but the best they’ve had in the Keys for a few weeks. In fact it was the first sunny day they’ve had in a week so we were very lucky. Due to the wind and waves there was only one location we could snorkel and that was Grecian Rocks. The sea changed from a greenish colour to aqua blue and suddenly we felt like we were in paradise. The captain anchored up in the wavy water and they picked this moment to give a discussion about snorkelling etc. It seemed like such a stupid time to do the talk while the boat was bobbing up and down and I could feel my tummy begin to turn. The captain let us know about some things we may see, like harmless jellyfish – so it was nice to know they didn’t have bad stings, and he also said we may see some predators in the area. Florida is the shark attack Capital of the world, although the sharks are more nibblers here than killers. However the caption did say that there hasn’t been any attacks here, and to consider ourselves lucky if we see a shark. 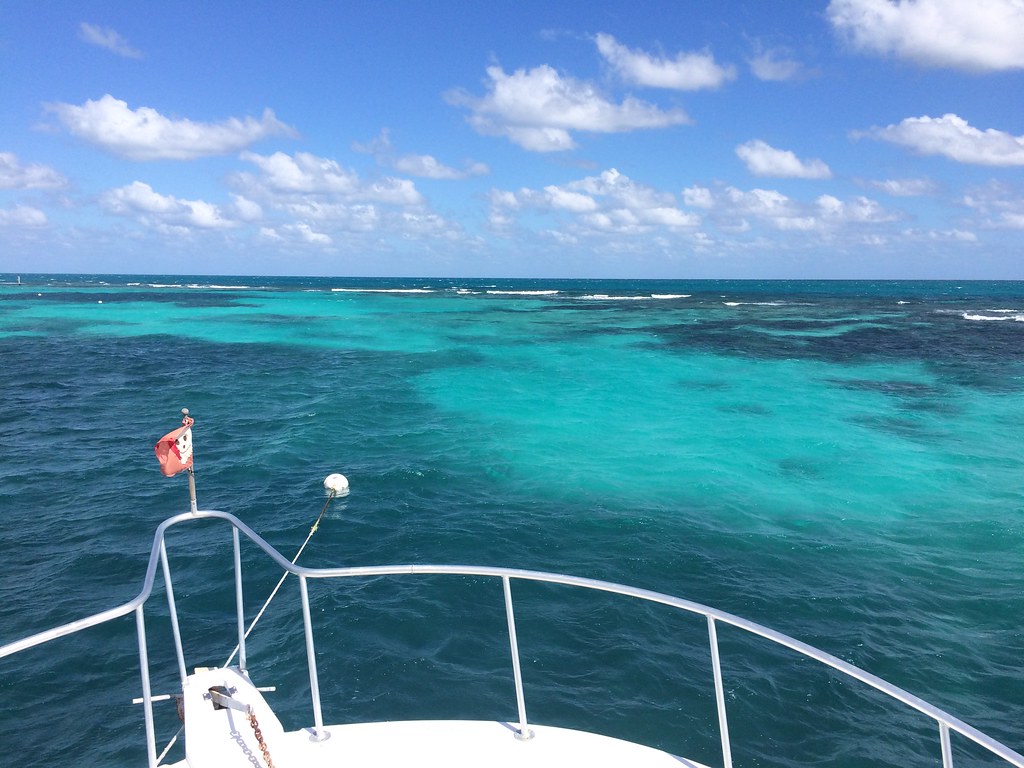 Craig and I were first in the water and I was disappointed when I looked down, the visibility was pretty bad. It was to be expected with the bad weather they’ve had recently but still a shame to not see the underwater world in perfect conditions. We swam away from the boat and towards the reef which was full of fan corals. I don’t think we’ve ever seen so many fan corals, so it was nice in that aspect but also a little same same after a while. There really wasn’t many other varieties of coral and the colours were purple or a bleached brownish colour. We didn’t see an abundance of fish but there were some very interesting ones like giant barracuda, French angelfish and my favourite, rainbow parrotfish, which are every colour of the rainbow and shimmer in the sun thanks to metallic looking scales. 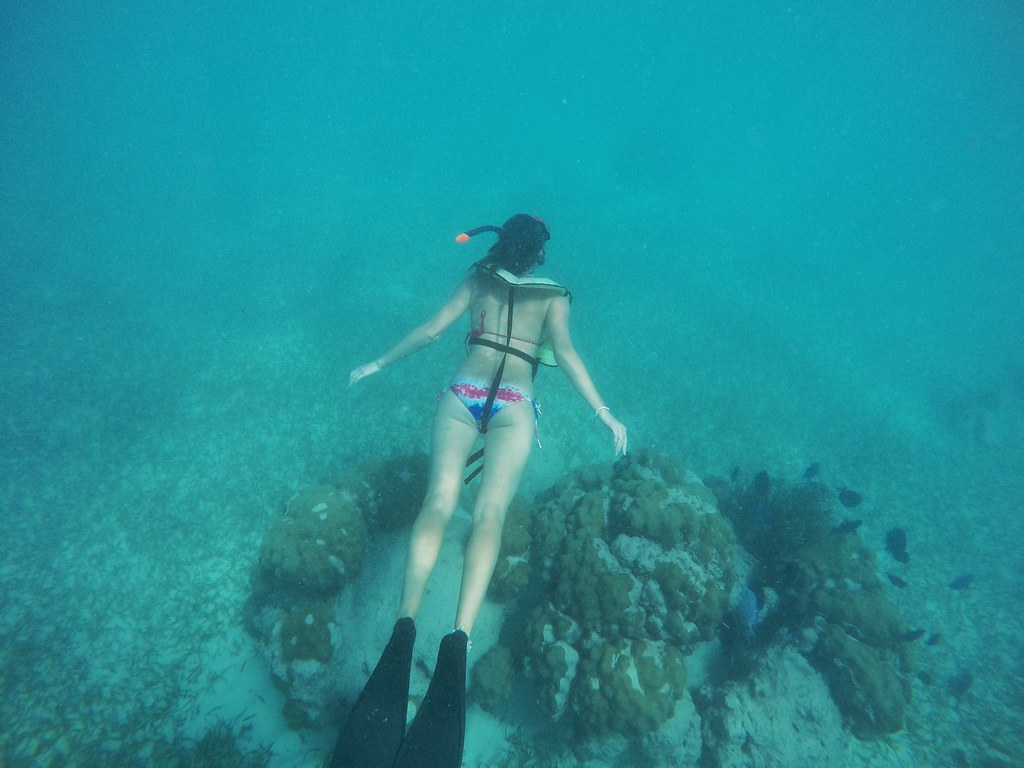 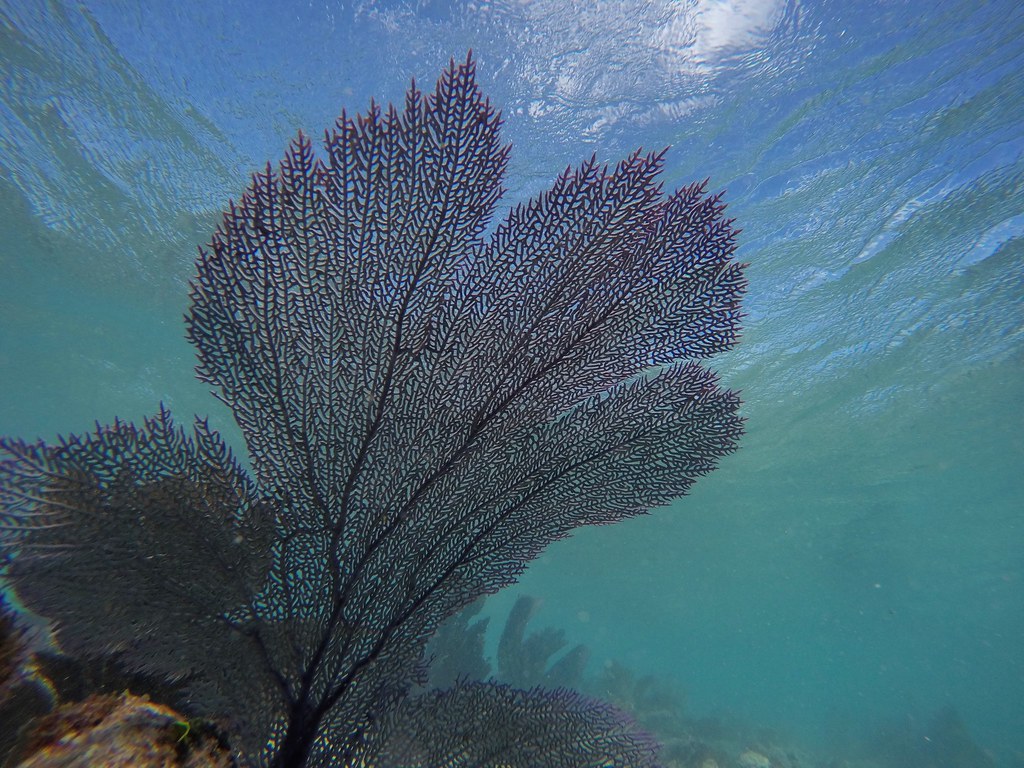 Craig and I will make a stupid noise through our snorkels to get each others attention if we see something cool and I suddenly heard Craig doing it and looked over to see a 6ft nurse shark gliding through the water!! Thank god the captain had given us a heads up that we might see a shark otherwise I’d of freaked out. I wasn’t scared in the slightest though and swam along with the shark until he effortlessly swam away from us. The current and waves were causing all the reef to sway back and fourth and I kept mistaking the movements for more sharks. 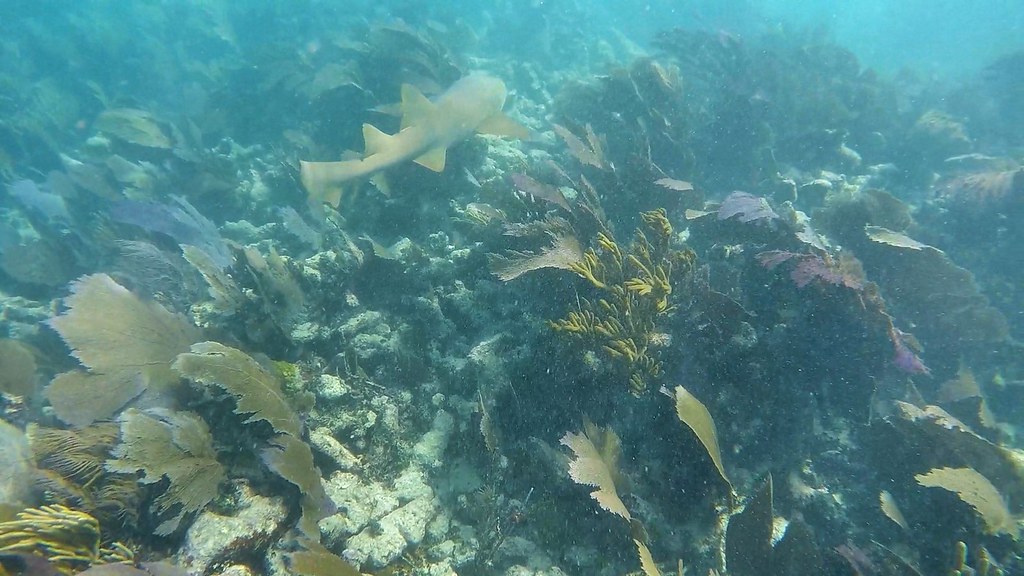 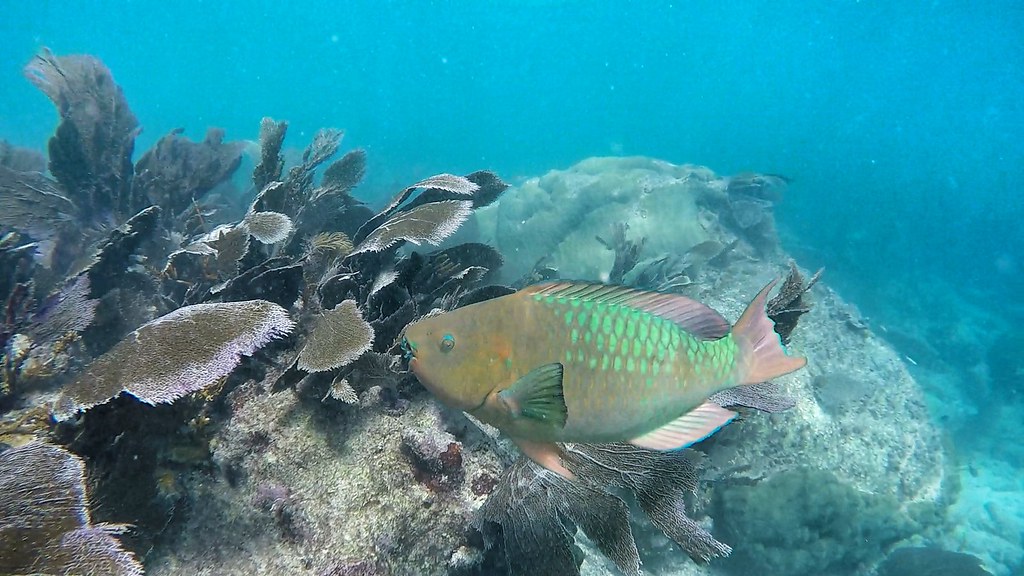 We all had to wear bib-style life jackets which had a pipe to blow air into. They also had an awkward strap that went between the legs and gave me a constant wedgie. Craig forgot that he had air in his jacket and went to dive down. He bubbled right back up to the surface and we both laughed, but then he did it again and actually hadn’t realised why he couldn’t dive down. I was having a right laugh at the surface as he came up defeated again and I watched him realise why he couldn’t dive down. If we hadn’t seen the shark the trip would of been a bit of a waste of time and money due to the poor visibility and lack of variety but we still enjoyed ourselves. 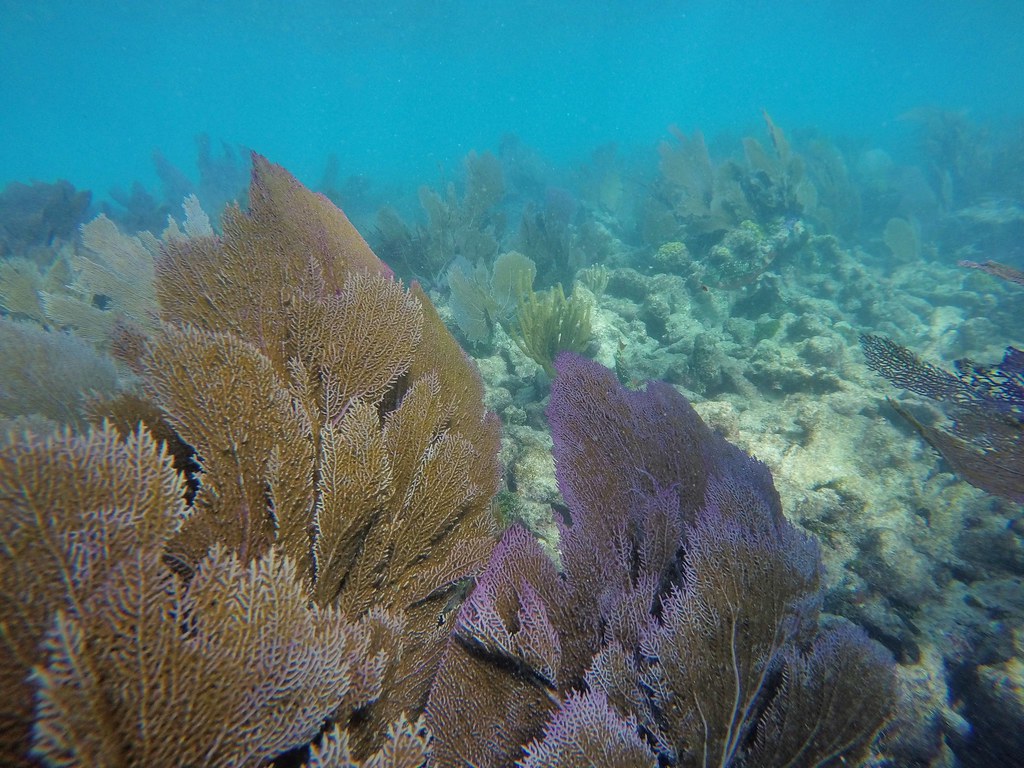 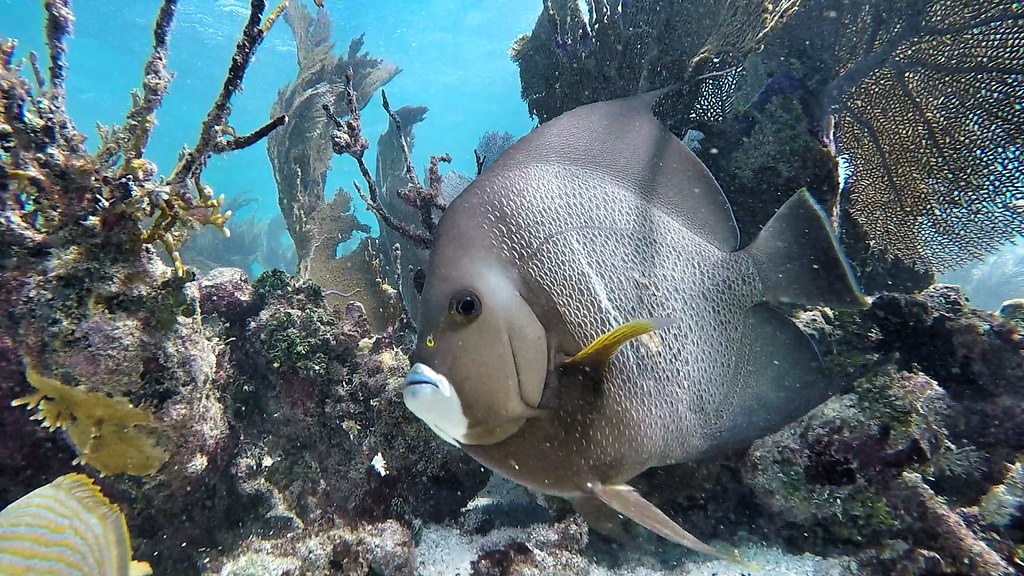 When we got back on the boat some snorkelers handed a staff member a big tip and she made sure the whole boat knew about it “IM JUST GONNA PUT THIS TIP IN THE POT OVER HERE!”. We still haven’t got our heads around tipping for tours in America. I really hate it because it’s so shoved in your face, when we did a whale trip in Hawaii staff members held out tip buckets as everyone exited the boat. It’s just a bit too pushed for our liking but so integrated into the American way of life.

In the afternoon we headed to Robbies Pier. It’s become famous as a place where you can feed tarpons. It all began when Robbie, the owner, saw a severely injured tarpon that was basically dying by his pier. He took it to the vets, got it back to good health and named it scar face as a hook had ripped it’s whole face. Sadly this is a common thing with tarpons because they are so strong, if they bite a hook and someone tries to reel them in then the tarpon will swim off and either the wire snaps leaving a hook in its mouth or the hook rips it’s mouth open. So scar face was released and a few days later swam back to the pier with a few buddies, bringing more and more pals along every day. There are now dozens of tarpons that hang around the pier hoping to be fed. It cost $1 entry onto the pier and $3 for a bucket of fish. The pier was fairly short and full of Pelicans. These weren’t normal Pelicans though, these were extremely aggressive ones and they scared the shit out of us. We went to the end of the pier and looked down to see huge tarpon below us. They were up to 6ft long, it was crazy! I held a small, smelly fish in my hand and waved it over the pier until I was attacked by Pelicans and seagulls. I freaked out and threw the fish aimlessly into the sea…that was my practice run. The next fish I had to dangle just above the water and it didn’t take long for a tarpon to jump up with its football sized mouth ready to receive the fish. It was pretty exciting and always a surprise as to which Tarpon would launch out at the same time as being pecked by Pelicans. 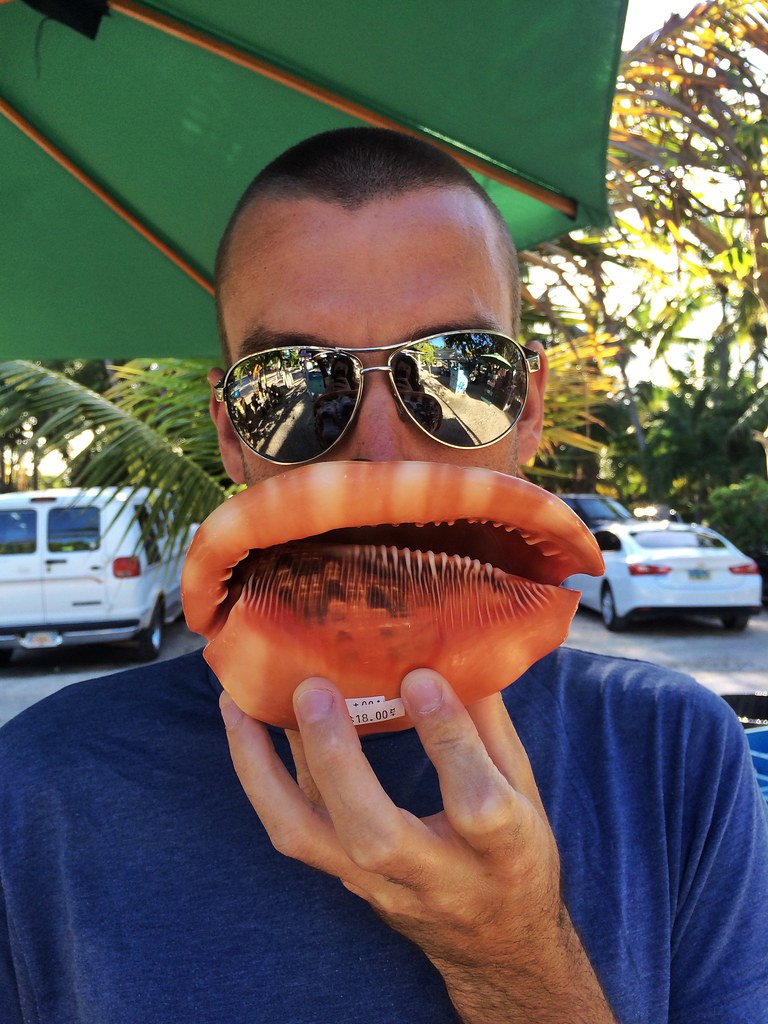 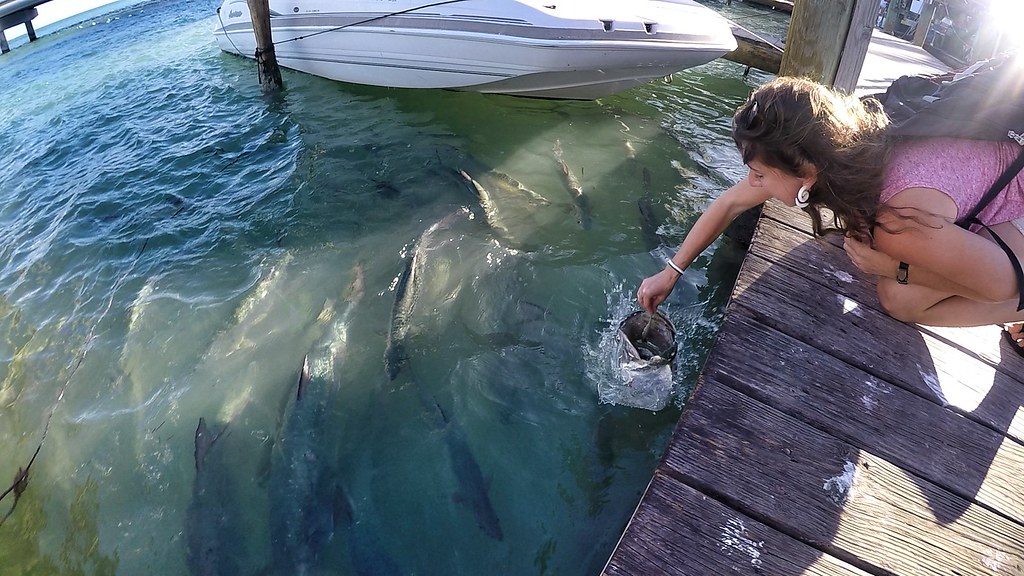 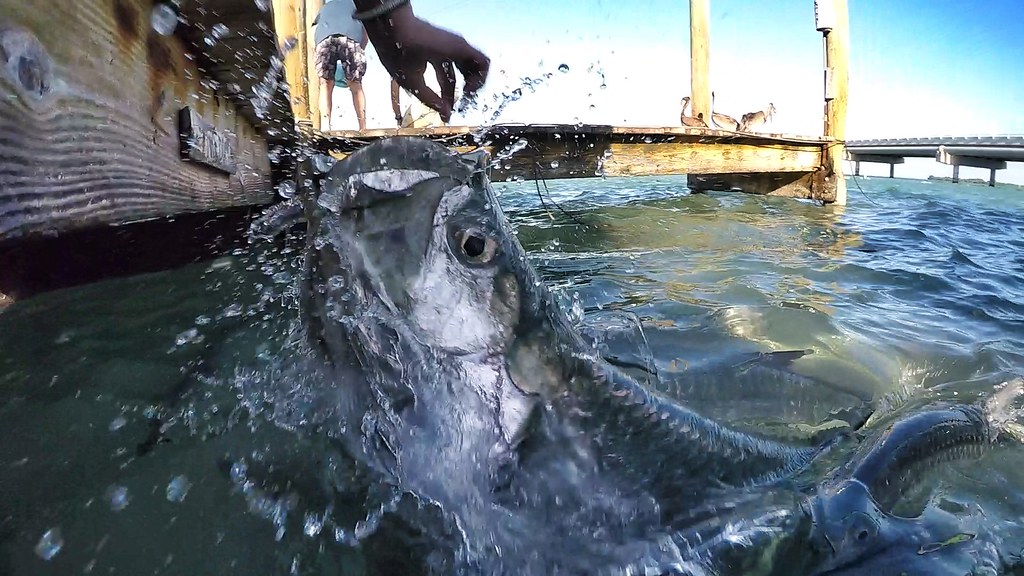 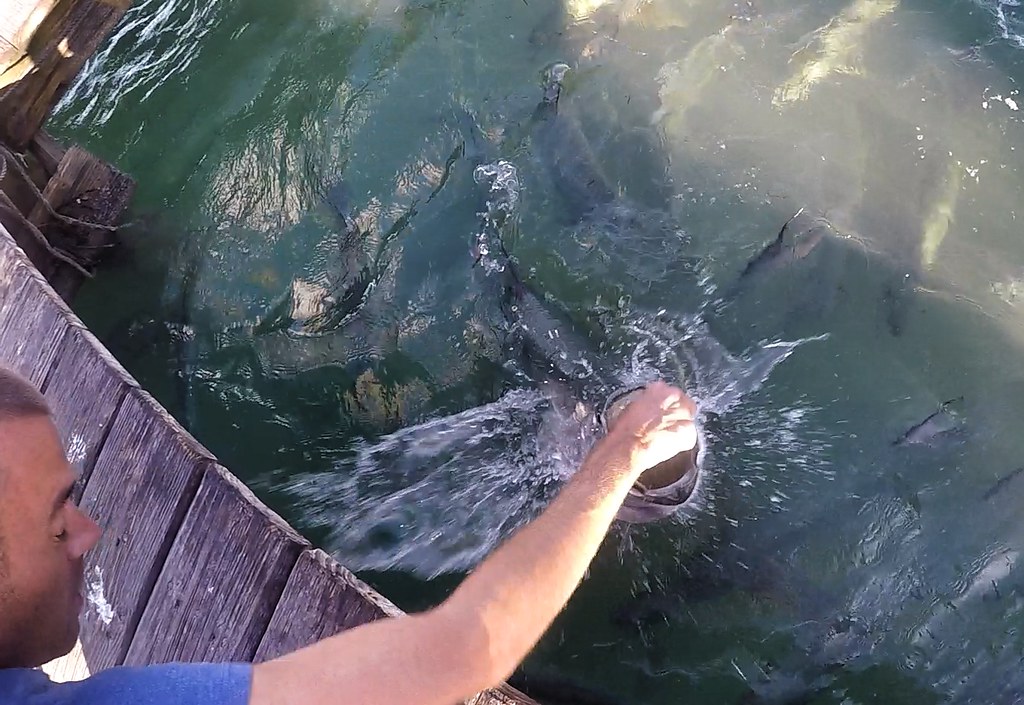 That night we decided to try wild camping along the Keys, if it didn’t succeed we had a back up option in Key Largo. We found a parking area for fishing along a narrow causeway and had sea views on either side of us. It was a lovely location, minus the busy road right by us. But we woke before the sun and watched it rise above the sea from the comfort of our home on wheels. 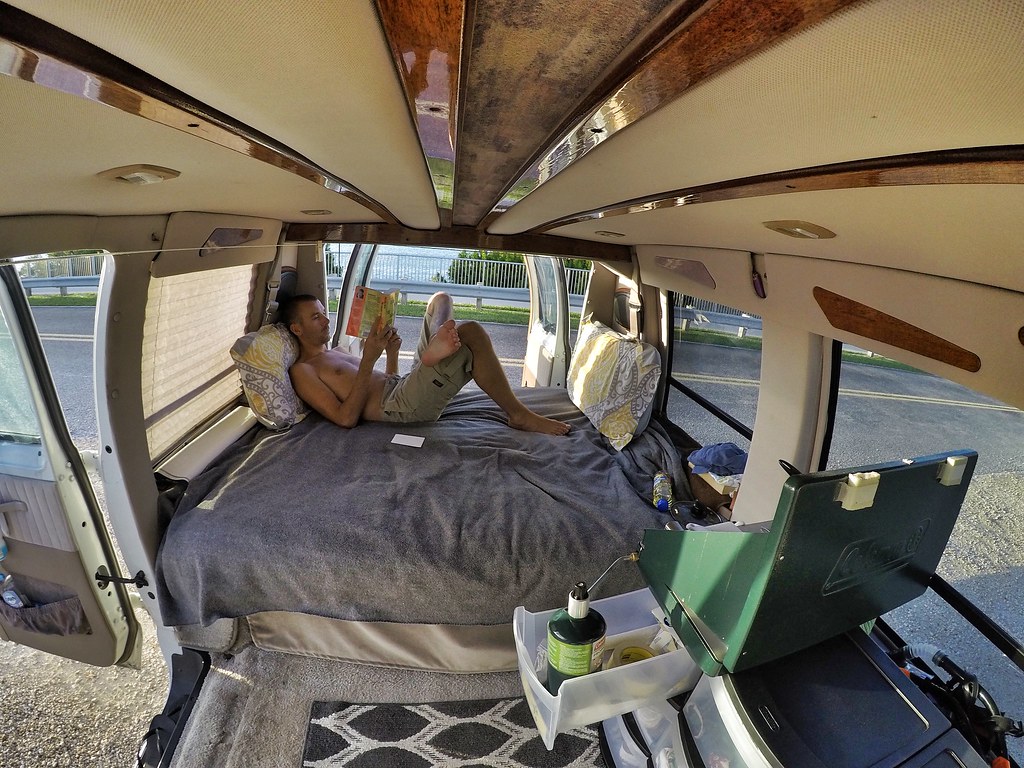 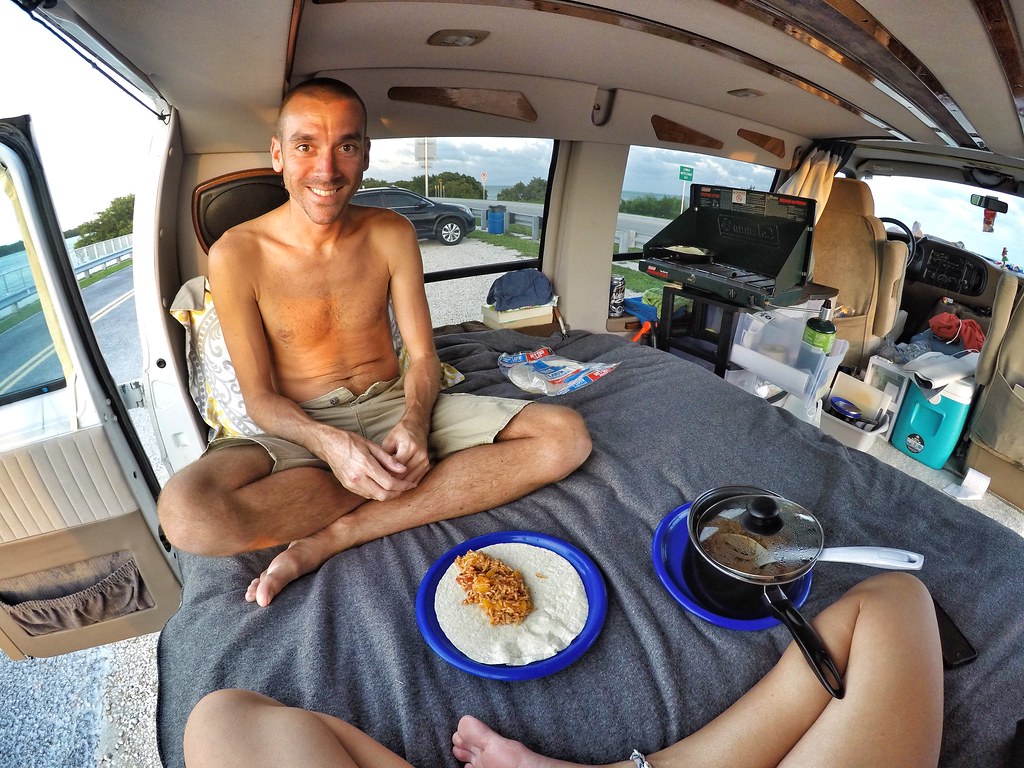 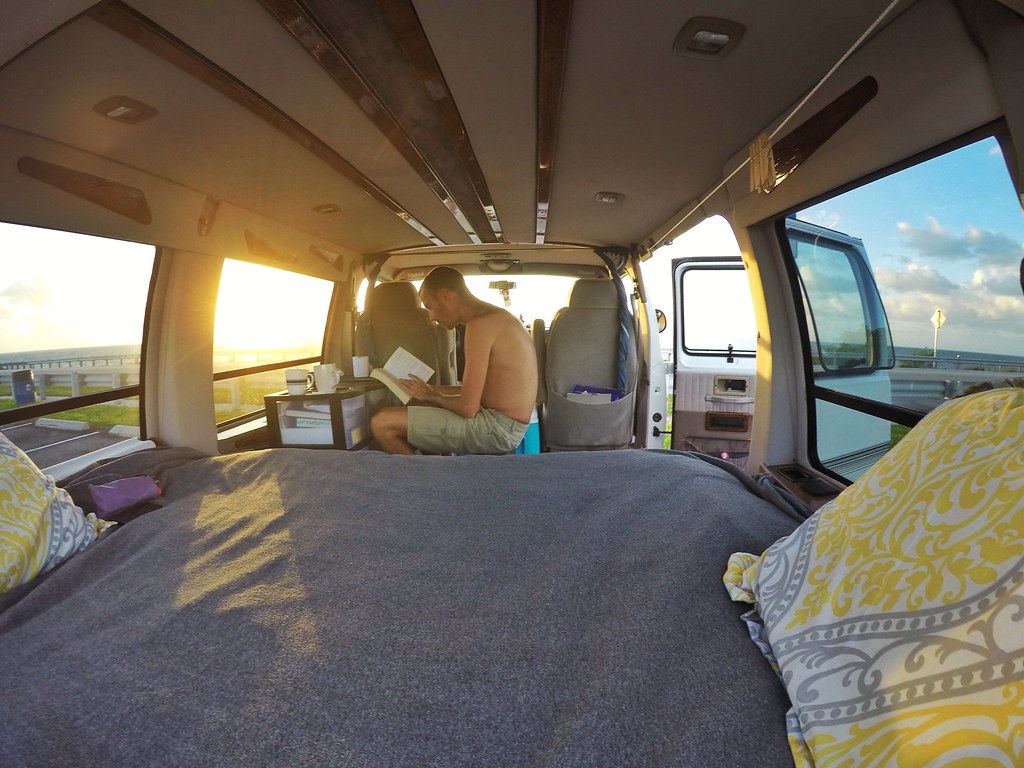