After having dinner in a parking area we had two cop cars pull up behind us shining their full beams at us like laser beams and burning our retinas. We hadn’t done anything wrong so we just sat there and continued to eat our candy. They called out on their microphone stating that they were state police. So I opened the side door and gave them a jolly queens wave and my best miss world smile. They didn’t take it too well and shouted back at me on the microphone “CLOSE THE DOOR! GET BACK IN YOUR VEHICLE! KEEP THE DOOR CLOSED!” So I frantically shut the door and put my tail between my legs. Two cops came to the back window where Craig was sat and shined their ridiculously bright torches in our eyes, it was hard to prove our innocents while squinting so much that we looked drunk and deranged. They asked Craig how the doors open, so Craig said you just pull the leaver – he’d misheard and received a very angry reply “IM NOT OPENING THE GODDAM DOOR, GET YOUR GIRLFRIEND TO OPEN IT”. So I slowly re-opened the door, this time with no fancy wave but instead wearily raising my hands above my head. The cops had one hand holding a torch and the other on a gun in their holster. They interrogated us about why we were there, and then became a bit nicer to us. Turns out we were unknowingly on native land and the cops just had to move us on. We were starting to see why America gets such bad rep with cops, they were so aggressive and rude from the outset. They were quite nice in the end though and the irony of the story was they advised a place where we were safe to camp – right where we were planning on staying up the road. We didn’t let them know that though. I was relieved they didn’t ask us to step out the vehicle as the pair of shorts I was wearing ripped while I was bent over doing the washing up – a massive 15cm tear, but because I wasn’t leaving the van I didn’t change my shorts, can you imagine ‘GET OUT OF THE VEHICLE, TURN AROUND…’ Noooo!

The cops warned us to lock the doors and don’t go outside at night due to alligators, panthers, snakes etc. I don’t know if locking the doors was for humans or extremely intelligent wildlife. We had yet another horrible night sleep in the sweltering heat. At 2am Daphne turned into an aviary and was filled with mosquitos!! My god they were everywhere and we killed over 50 with our fly zapper. When we got up the next day we realised we had parked in between two swamps so a major breeding area for mosquitos.

That morning we headed into a section of the Everglades National Park and used our national park pass to get in for free. Of course they had added extras like a 7 mile tram ride for $25! We thought that it should be offered for free as a ranger program, but alas, this is Florida. Anyway, we did an uneventful boardwalk and then walked down an empty park road that paralleled a stream. It didn’t take us long to spot an alligator in the water, he was about 6-8ft long and only a couple meters from the road. We ended up seeing 4 more alligators, a turtle, a black snake, a beautiful red Cardinal bird and the usual herons and vultures. But the highlight was seeing two alligator mums and their babies. One mum was resting in the water and we heard some squeaks in a grassy bush beside her, then we saw it was 3 tiny alligators. They were only 20cm long and looked like cute little lizards. When we headed back I thought I spotted a snake near one of the alligators but it was actually another baby alligator! This one stole the show as it was basking in the sun on a little lily-pad island all to itself. Pink flowers were in the process of opening and the proud mum was cleverly hidden under a lily pad umbrella. 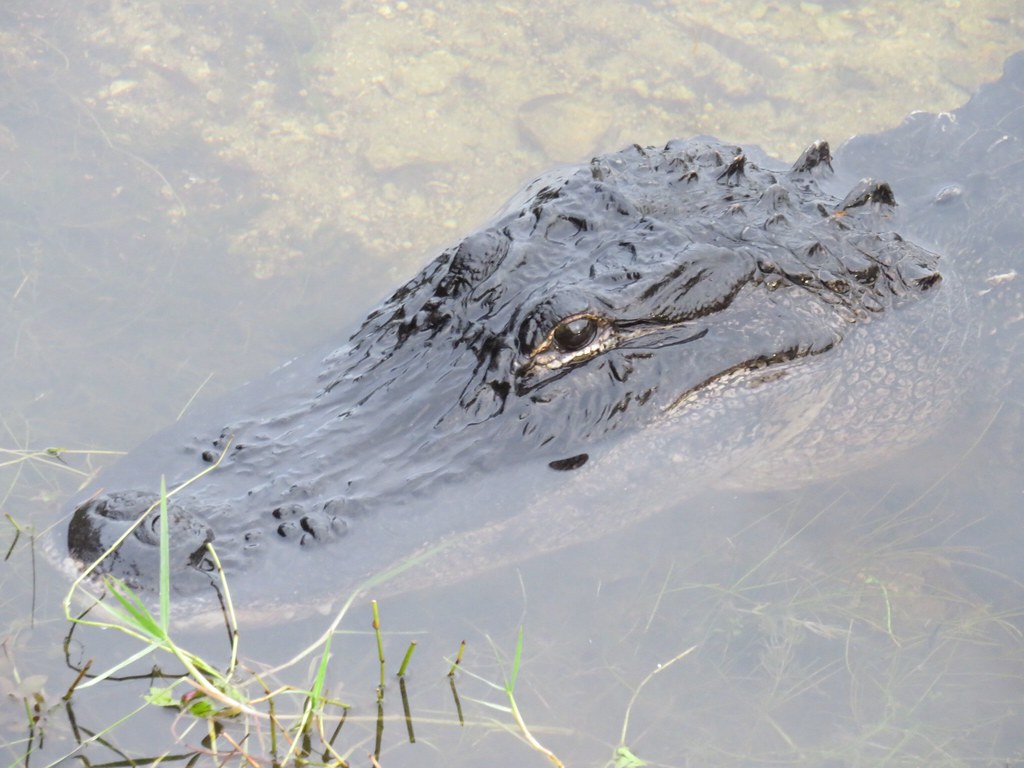 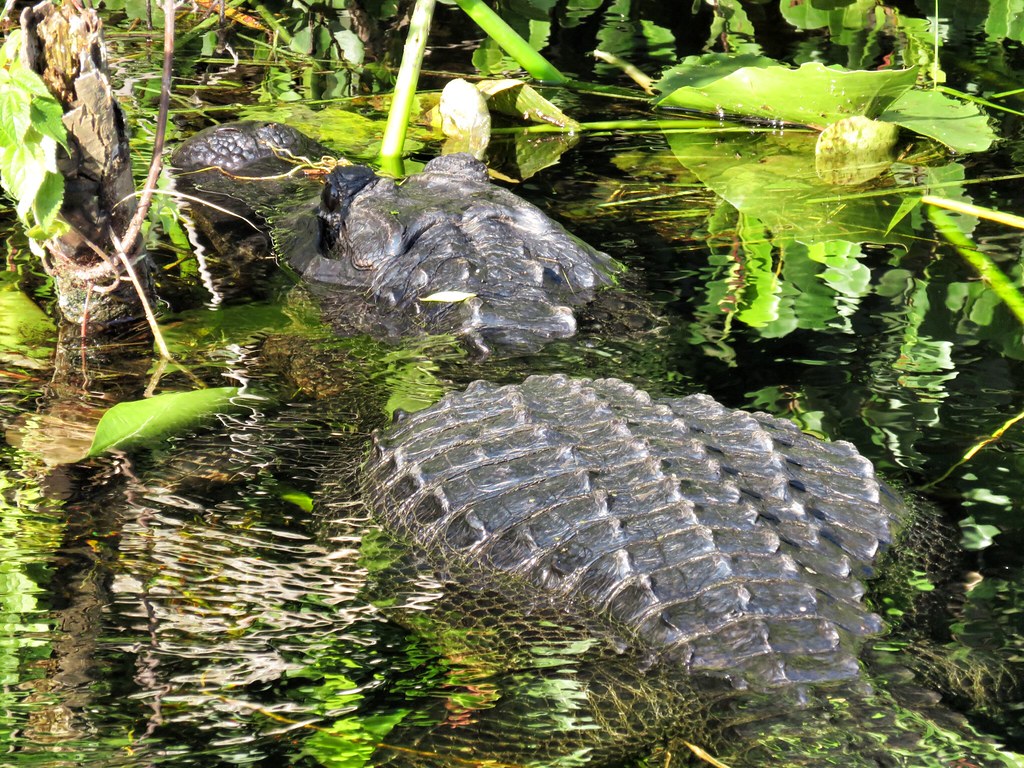 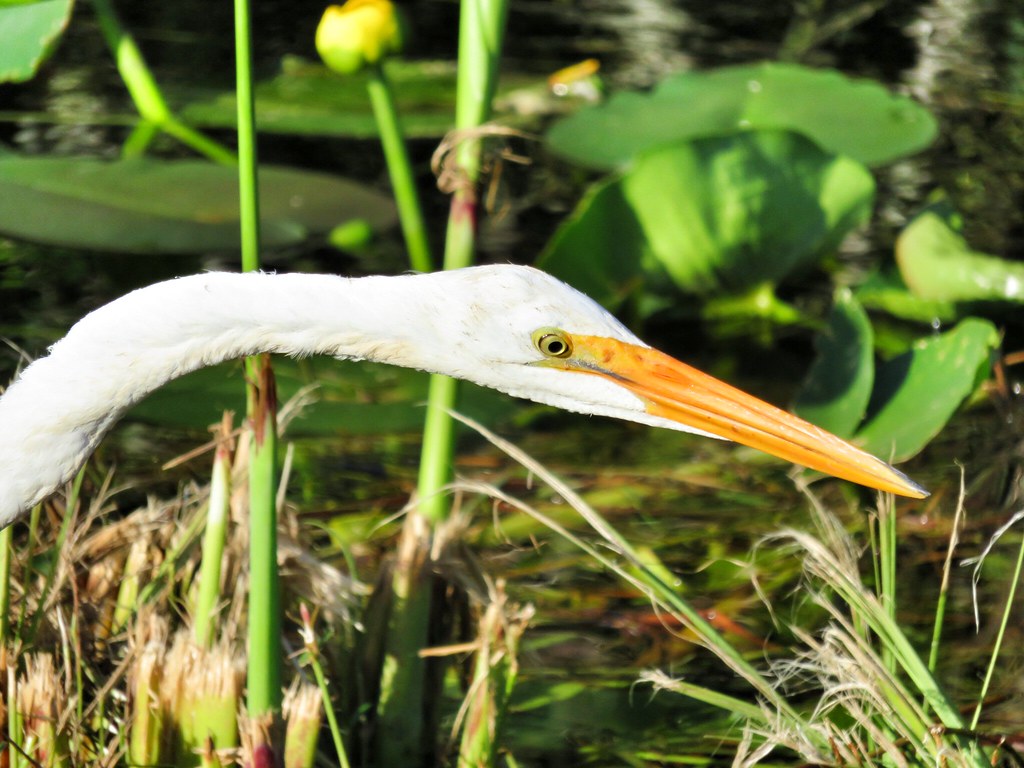 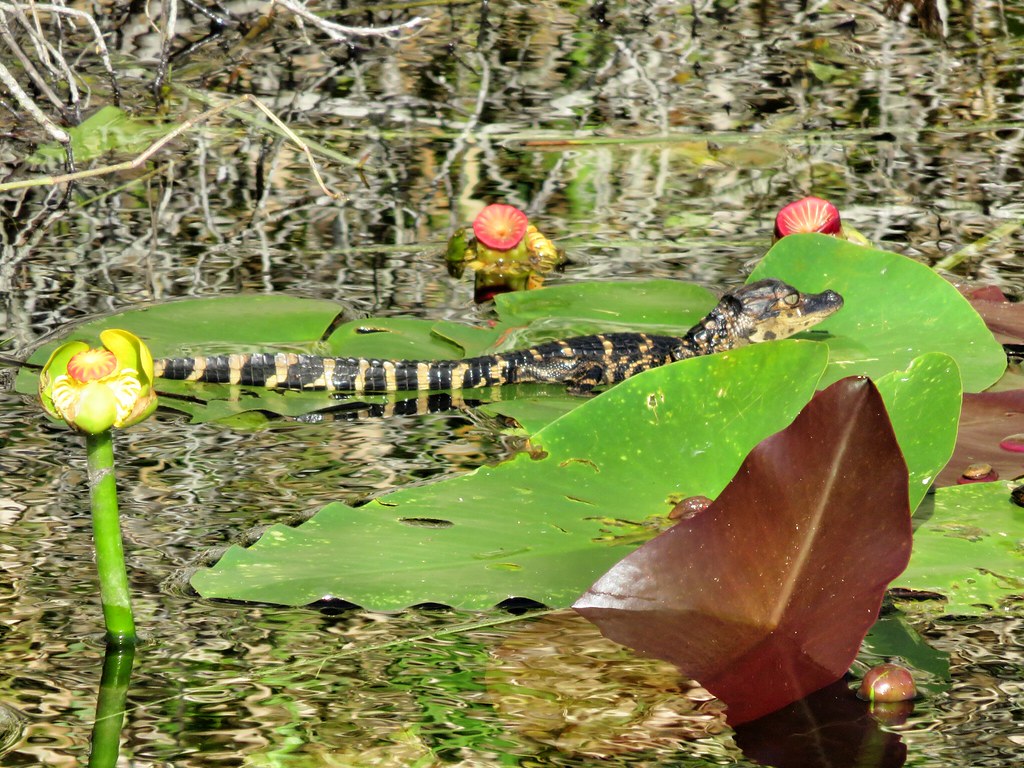 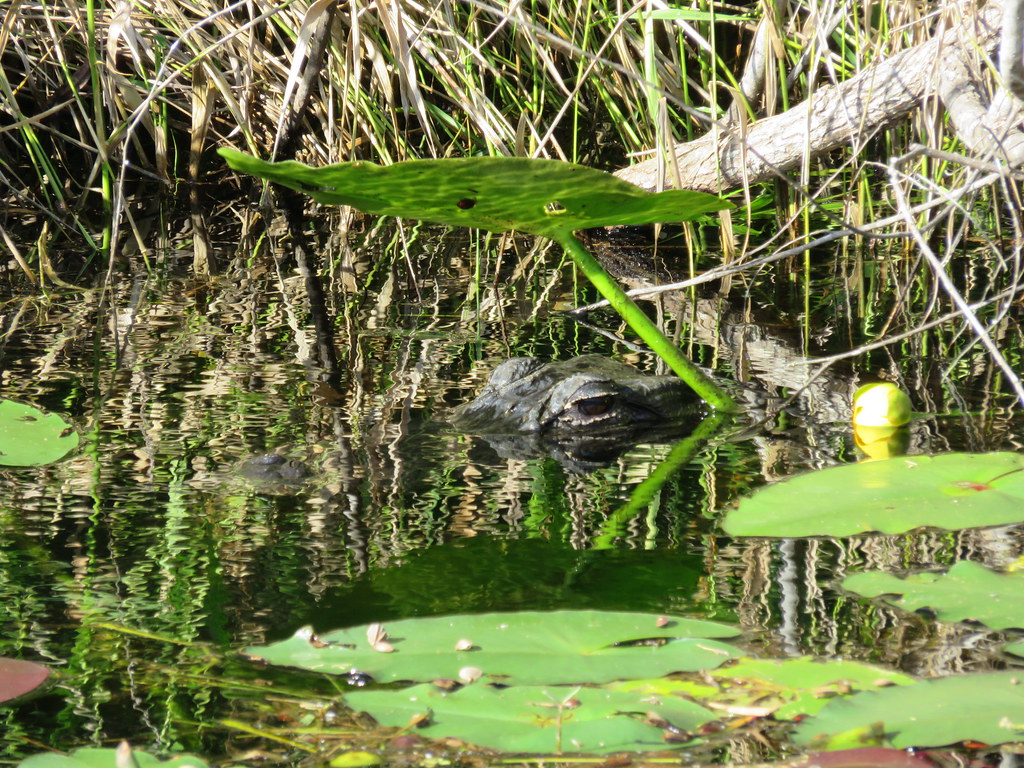 Later on we headed to the south entrance of the park which led 38 miles down to the sea and right through the national park. We did four short trails through a variety of terrain, with lakes, ponds, and thick forest, but there didn’t seem to be any life when we visited except for one hidden alligator and two huge and colourful cricket looking insects. We decided we had to continue the road till the end though, we couldn’t leave and not see the whole area so we drove and drove until we reached Flamingo. Daphne had to conquer two passes which we hadn’t expected to encounter ‘Rock Reef Pass’ was 3ft high and had us giggling at how an earth it could be called a pass. When we reached Flamingo we opened the doors, had a little stretch and got absolutely swarmed by mosquitos. They were horrendous!! We walked to the shoreline for a view of the milky green sea dotted with islands and ran back. We darted into a building hoping to seek refuge and went into the family restroom. We couldn’t even pee without being mauled alive and had to swat each other…one of our most romantic moments. We ran back to Daphne and Craig opted for repellent while I put long clothes on. The information centre was closed but a sign had an arrow showing the mosquito conditions. Apparently on our visit we were in the middle at unpleasant, I can’t imagine visiting when the arrows pointing at the top of the chart labelled ‘hysterical’. 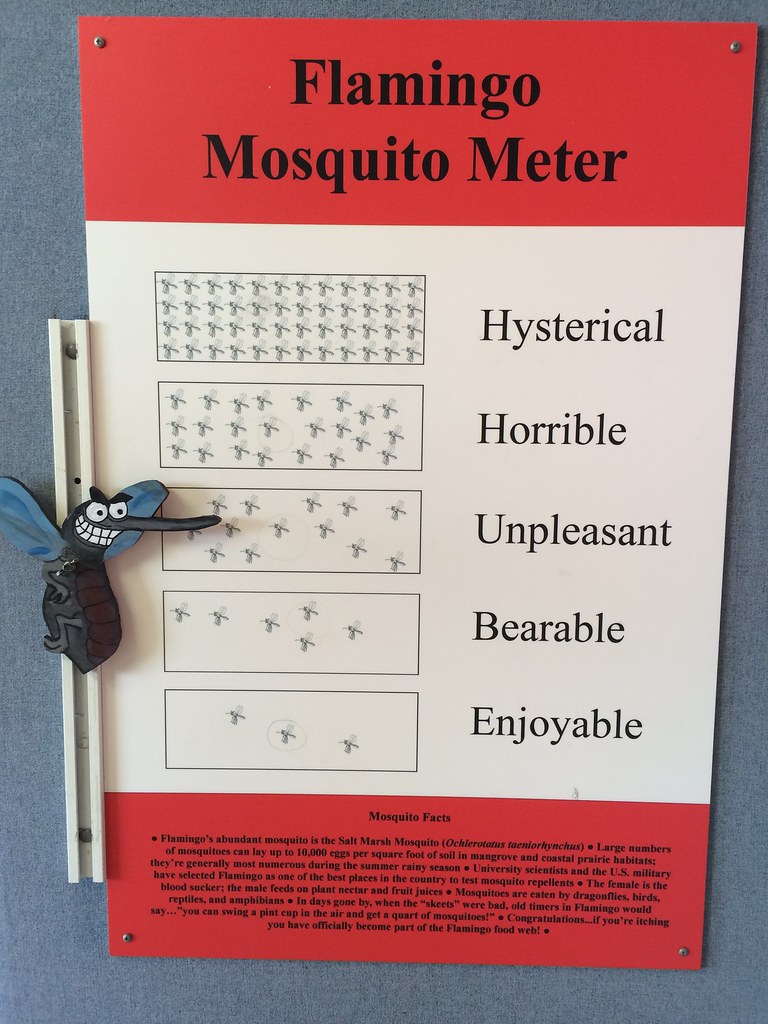 The Everglades is the only place in the world where alligators and American crocodiles live close to one another. I can’t be sure but I think we saw a crocodile, when we got closer to the edge of the jetty but it abruptly dove into the water. The water was still and the colour of ink, really shiny and black. A couple of kayakers paddled by and the croc came back to the surface just a meter from them and dove right back down causing a big splash…they paddled back to shore pretty quickly. A campground was nearby so we headed there to just fill up on water. The Flamingo area is where the US military and scientists test mosquito repellent, therefore they are abundant and building a campground their seemed laughable. We were surprised to see people actually camping there and couldn’t work out if we felt bad for them or wanted to do a Dr. Evil laugh. It was scorching hot but people had camp fires roaring to discourage the mosquitos. A couple were taking refuge in the netted inner part of their tent so were visible to the world and we couldn’t help but laugh at them frantically swatting mozzies that had got inside. A group of people on a tour were all suited and booted in coats, long trousers, hats and mosquitos nets over their faces. It would be like a sauna in all those clothes, I would imagine that the brochure for the company shows happy families paddling a canoe in the wilderness, and then they turn up and are handed a suit similar to a person dealing with an Ebola patient. It just wasn’t fun, we struggled just filling up our water canister and quickly hit the road. I still wanted to see the pink spoonbill birds so we pulled up at Eco Pond to have a quick peek. The trail was grassy so as soon as we stepped on it the air around us turned black with clouds of mosquitos that had been awoken. We were covered in bites, we may or may not have contracted zika and we were fed up with the area. It was time to leave. 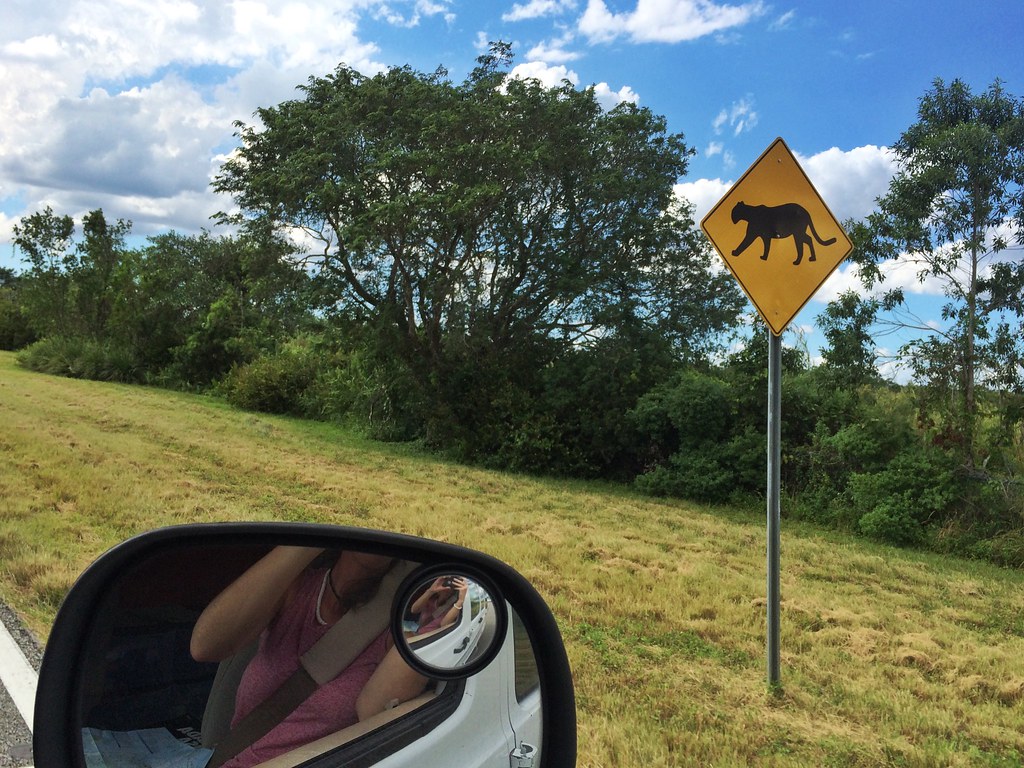 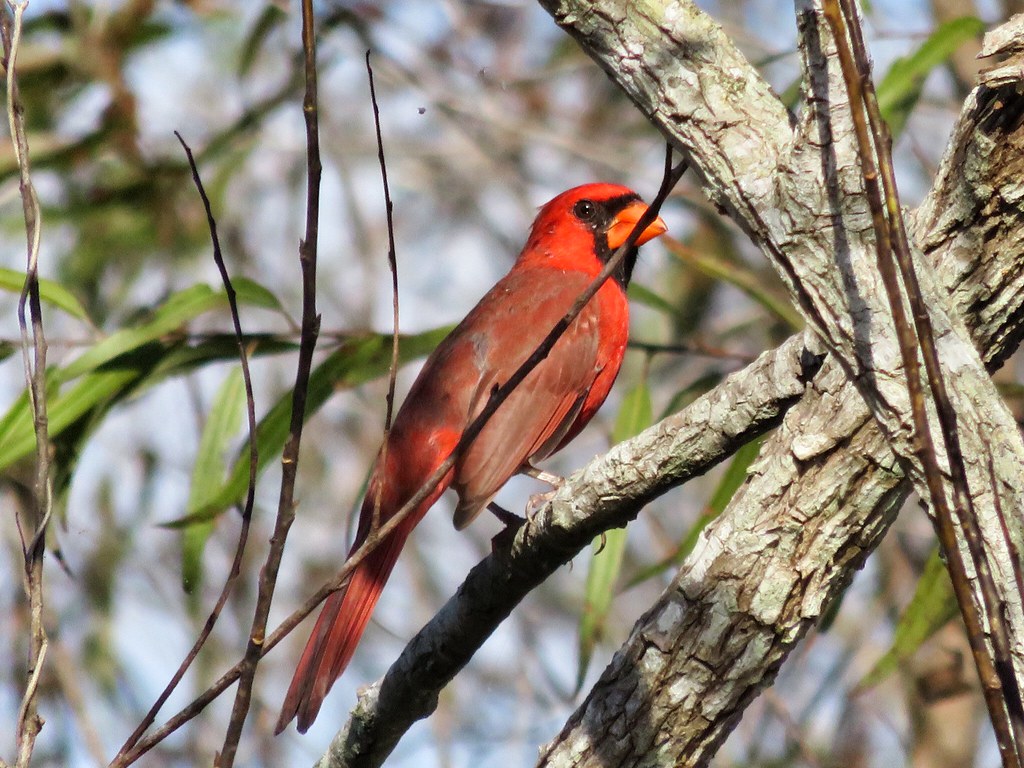