We couldn’t find a place to camp around Naples so we continued south under a pitch black sky into an area of true wilderness in south western Florida. We’ve seen some pretty interesting wildlife signs in Florida that we hadn’t expected to see, first bears and now panther signs. The Floridan Panther is endangered and sadly there have been many deaths due to traffic collisions at night. We weren’t lucky enough to see one but we did find a place to pull up for the night in a trail carpark. I don’t know what happened to the weather but it was the hottest night we’ve experienced on this roadtrip. Daphne was like an oven, there was no wind and we felt like we were on a slow cook cycle. Then the mosquitos joined the party for some swatting dance moves. We couldn’t sleep at all and did something we’ve never done before, we turned the engine on in the middle of the night and blasted the AC, boy did it feel good for those 5 minutes of heaven. We were up before the sun, in fact I think we were up all night! We did a short stroll in the Ten Thousand Islands National Wildlife Refuge and spotted a lone alligator and then dragged our feet back to Daphne for an extra strong coffee. 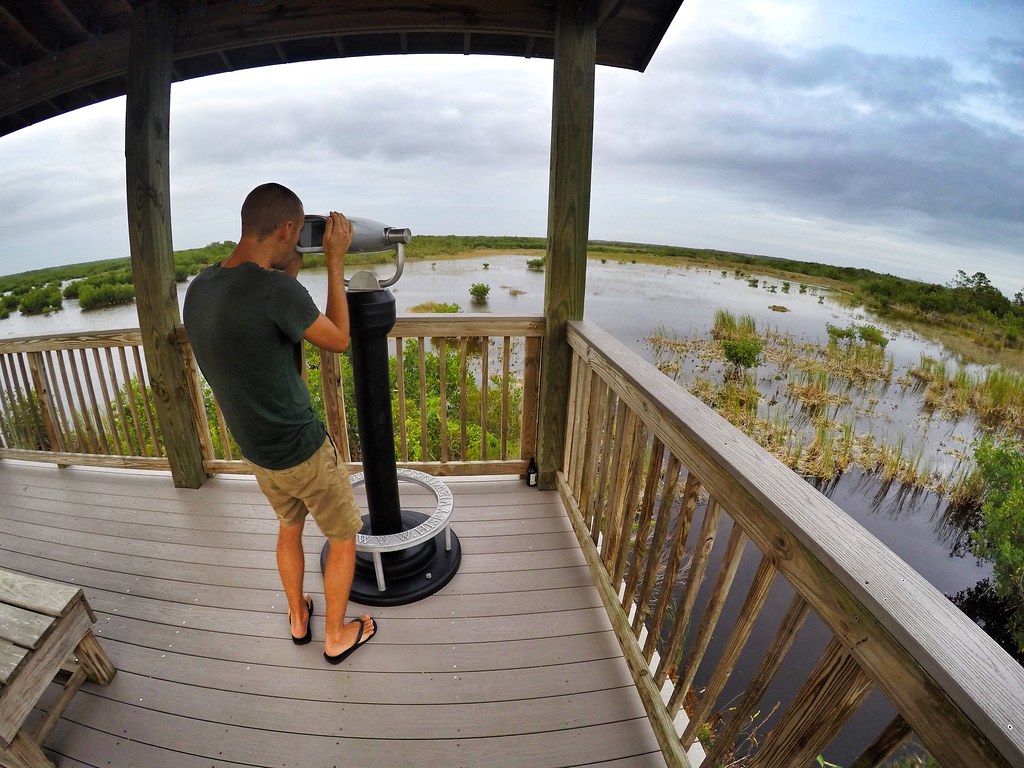 Florida is well known for airboat rides which we’d only ever seen on the TV, usually just on the show Destroyed in Seconds when the boat flips in the air and a voice over explains how great this disaster is, “not only was it a high speed crash but he’s unconscious in alligator infested water!” So yeah, there we were paying up for an hour long airboat ride to see alligators. 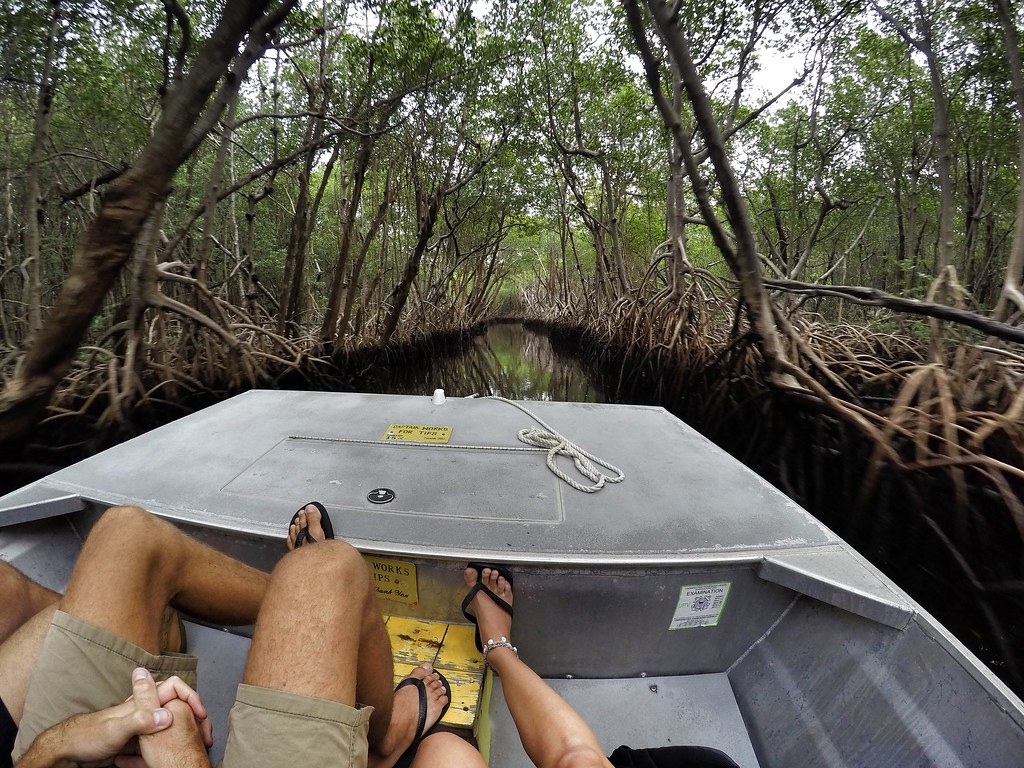 There were two retired couples on our boat and I was very happy that we were positioned on the front seats. I could see an alligator across the river before we even set off so the boatman, James I think, slowly took us to the edge of that island to check him out. The alligator had a little swim and dunked into the brown water, as did another one nearby. A manatee came up for air and then vanished and we were left staring at a heron and a tree full of vultures. So far this trip wasn’t exactly panning out how we’d hoped. We continued at idle speed to protect manatees and then a sign said ‘airboat entry’ and James took us through an area of mangroves. He hit full throttle and we were flying through the waterways. Mangroves were on either side of us and at times it felt like the water was only just as wide as the boat, we sped over sticks poking out the water and ducked for branches. The mangroves just seemed to get narrower and narrower and yet we seemed to be gaining speed. When the mangroves opened to a large area of water surrounded by mangrove islands James spun the wheel and did a doughnut in the water, wahooooo! It was so much fun!! 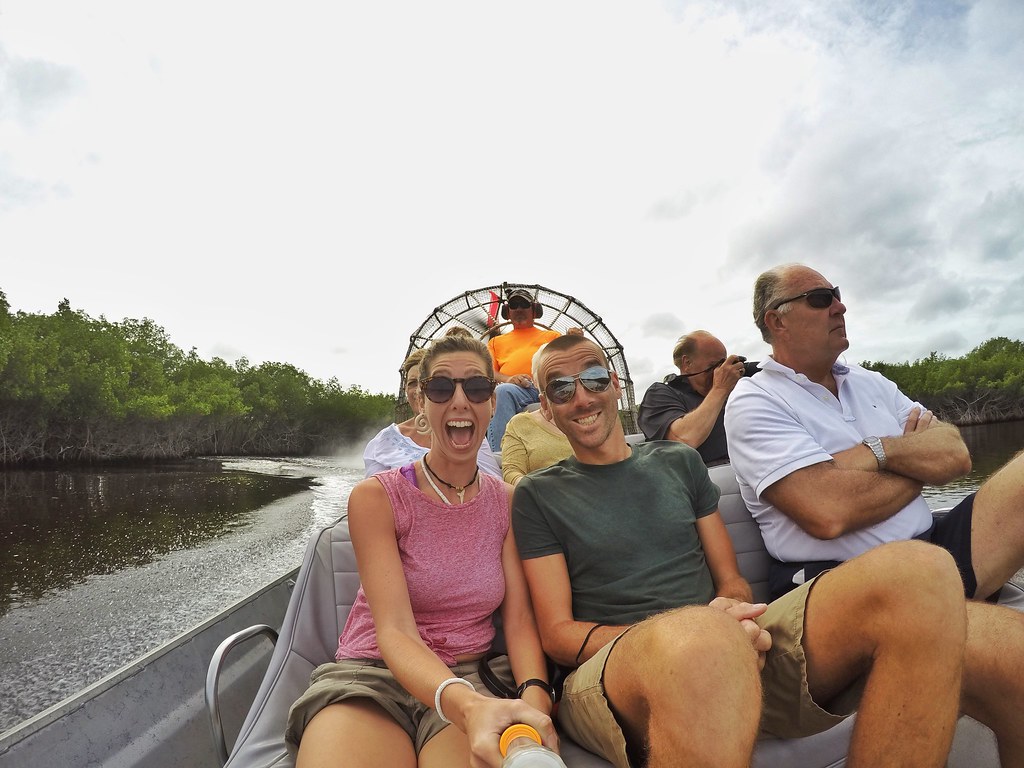 We sped off again through narrow chasms and took tight bends where we’d all lean sideways and get sprayed with water. I had a huge grin on my face the whole time, Craig was loving it too (although not smiling as much as me so I asked him afterwards if he enjoyed it and he loved it and said he must’ve been in his own world envisioning he was driving the boat and I just cracked up), but the chap sat next to us (who I’ll call Fred) had his arms folded and an emotionless face the whole time. We’d be tilted sideways and looking like a couple of kids on a rollercoaster ride while Fred sat there emotionless – he could of been cut out and placed in a business meeting. Maybe it just wasn’t his thing and he only came along to please his friends, or maybe like Craig he was imagining himself in control of the boat. 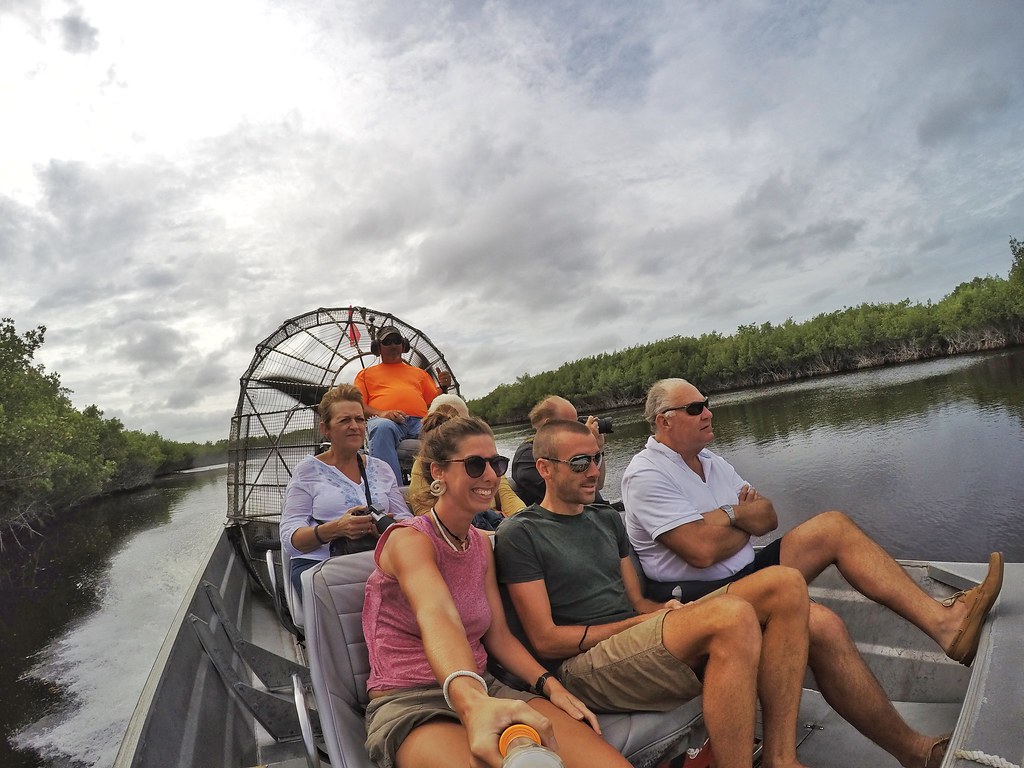 When we reached an open area I spotted an alligator whose back was out the water and face was resting on a branch. We took some photos and then Fred pointed out lots of catfish besides the boat. James opened a packet of Cheetos and thew one to the fish who all slapped the water to frantically grab the food. Lots of people feed fish for fishing purposes so it wasn’t a big deal. I suddenly noticed the alligator was moving and swimming right our way. He was probably 8ft long and was right by our boat, I was so excited! Then James threw a few Cheetos towards the alligator and the gator came our way to grab the food. Craig and I couldn’t believe the boatman was feeding the wild animal, it’s illegal! I guess this one gets food regularly for him to swim so fearlessly towards us, the other gators we saw vanished in a flash. 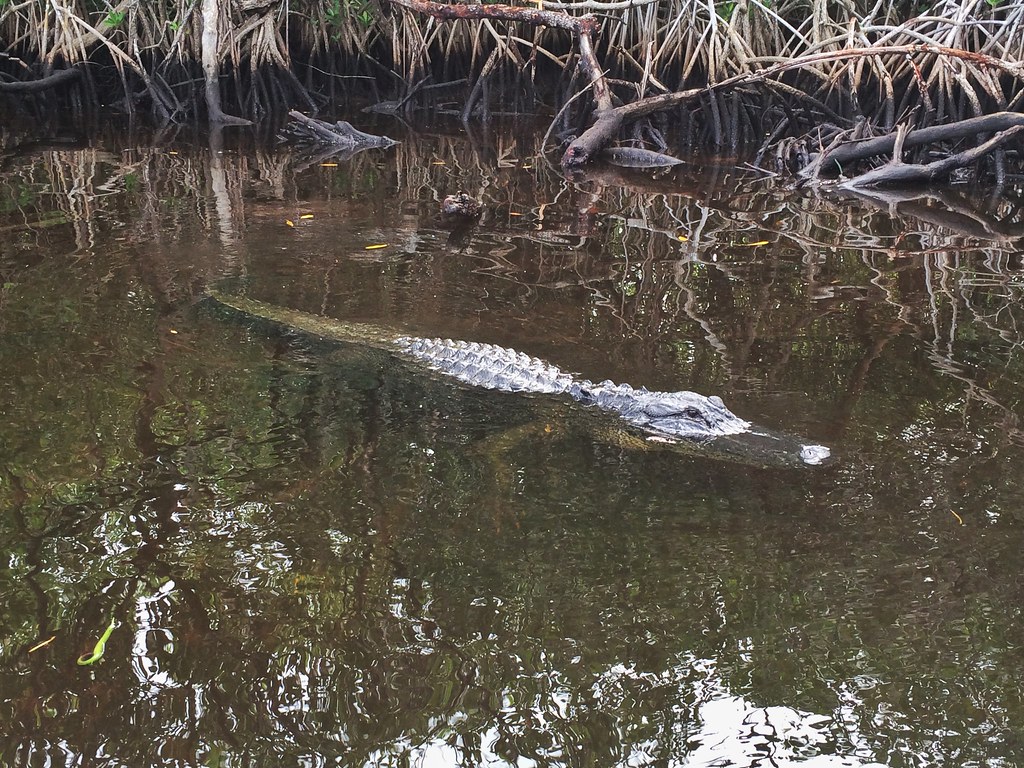 On the way back the ladies behind us were giggling lots and we soon realised why. James had a stick with a feather on it and he had tickled the ladies neck with it to act like a fly. It only took a couple tries for her to realise, he tried Craig too and who caught onto his game quickly. Then he tickled Fred, and instead of looking around he just swatted his head. We giggled a little. He tickled him again and again Fred just kept frantically swatting this imaginary fly away. Craig and I were struggling to contain ourselves. Then his wife’s friend said “ah it’s a nasty bug I just flicked him off me and he must’ve landed on you”. Craig and I had watery eyes now as the man continued to swat himself, refolding his arms between each swat. He slightly glanced our way and we bit our lips for a second before looking at each other and snorting with muffled giggles. The boat ticket included a boardwalk and alligator exhibit so we checked them out afterwards and an enthusiastic worker showed us the alligators. I wasn’t quite sure what the point was in having these alligators in captivity, they weren’t rescued, they weren’t farmed for food, so why did they keep ten or so like this? He explained that alligators adapt very well to captivity and apparently don’t have the part in their brain for emotions, they’re not happy nor sad, and as long as they have water, land, shade and food then their fine. But has anyone asked the gators if their fine? They must have some emotions as the females are very protective of their babies. 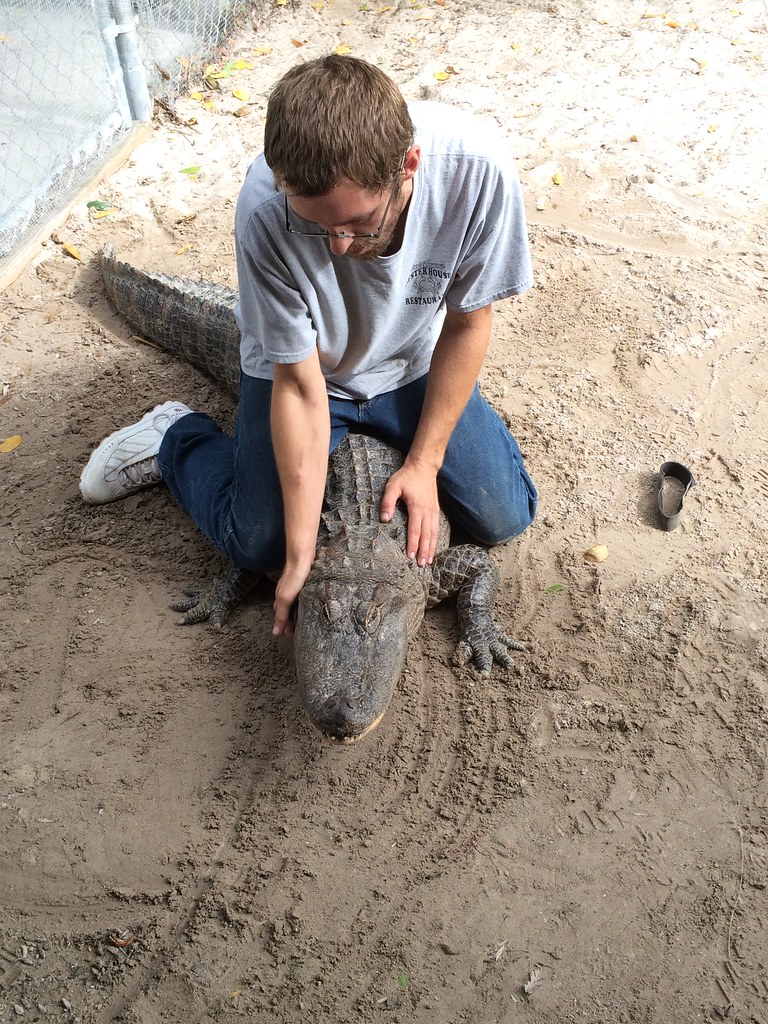 Anyway, he showed us a really fat alligator named Lucky. He had a really chubby neck and enjoyed having it rubbed and would tilt his head and close his eyes like a dog would. Sadly he clearly didn’t enjoy having his jaws prised open three times nor did he enjoy having the edge of his eye tapped over and over again to show us the protective eye layer they have. They are pretty cleverly designed animals as this sort of film goes over their eyes like goggles so they can see underwater. Little black dots along their chin are receptors to sense movement and they have waterproof seals for their ears. The worker heaved Lucky up onto the counter and put a band over its mouth so it couldn’t bite us. He said this is the only friendly gator and all the others hate him…maybe they didn’t appreciate you straddling them like a pony and poking their face. We were allowed to stroke Lucky who was much softer than we’d expected. His belly was like a snakes and he just calmly laid there…maybe he was an obese gator and kinda immobile though. 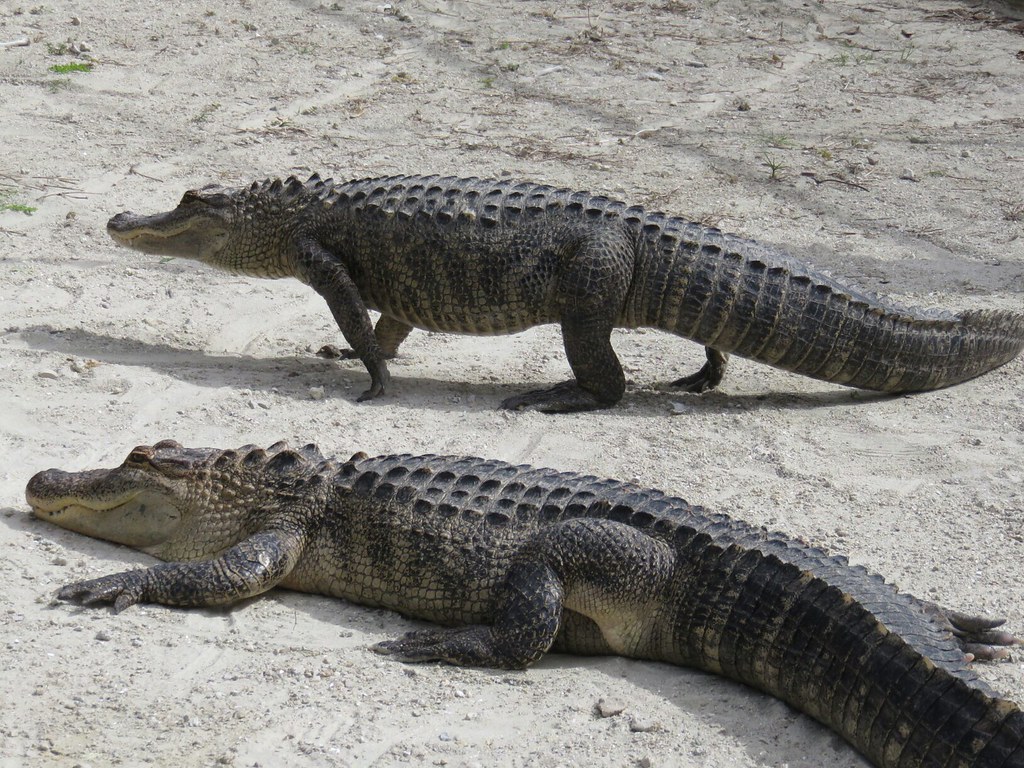 The gator man then showed us two baby alligators which were a couple of feet long. Their teeth were like razors so they too got a band put over their mouths and we were handed them to take a photo with. They were lovely and soft again, and although we don’t like seeing animals in captivity it was interesting to feel these animals and see their fierce and gentle sides. We were told there’s a very short hunting season and it costs $350 for a locals permit or $1000 for other people, with that permit only one alligator can be hunted. Maybe that explains why we haven’t seen a huge gator, they could all be trophies. The guy also said that when he goes fishing at night time and shines his torch, all he sees is a sea of eyes shining back at him. I can’t think of anything creepier!