We had a bit of a crazy morning after finding out an interview we did had been published as headline news on The Mail Online. Headline news?! It didn’t take long for other news sites to get hold of the story and we were soon featured in articles around the world. My sister kept me posted saying the world had gone crazy, China, The Netherlands, Sri Lanka, Nigeria…the list goes on, had all published the article. And anyone that reads the article will think we ‘braved howling wolves’ when all I said was we loved camping and hearing the magical sound of wolves, I suppose it had to stand out from the crowd somehow. The next day our story was printed in paper in the Daily Express!! We left the free wifi zone and continued with our normal life. 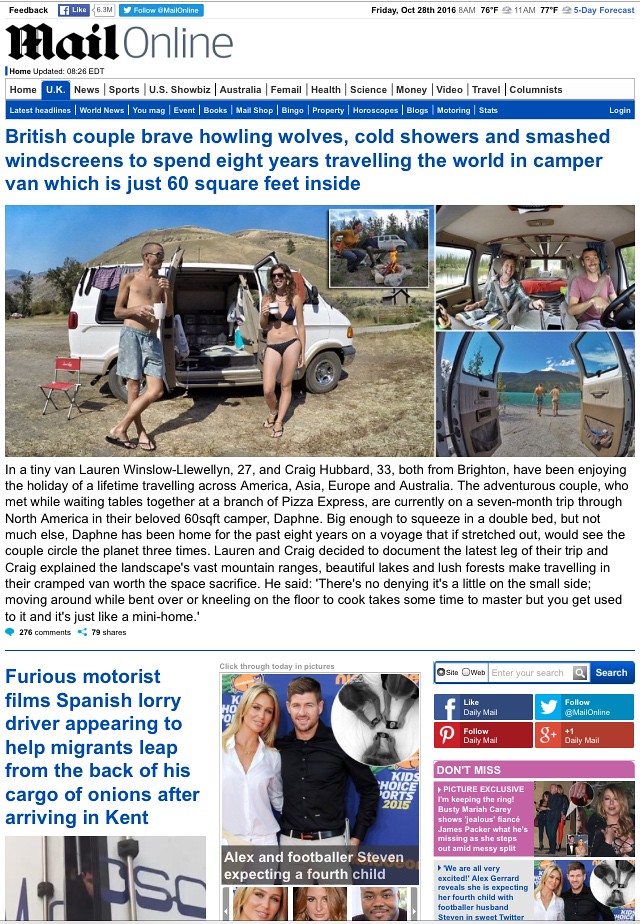 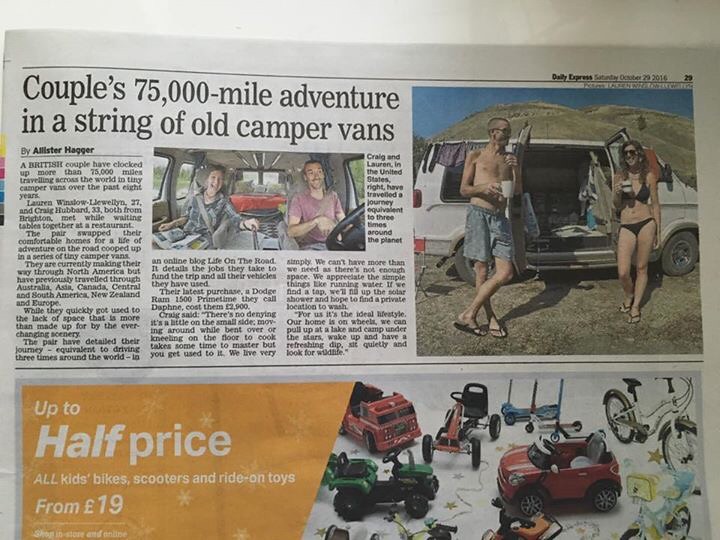 We headed to the Six Mile Cypress Slough Preserve which had a boardwalk trail through mangroves, swamps and lakes. Trees constantly lived in a couple feet of water and the surface was covered in those tiny green leafy moss things that collect on ponds. We spotted a distant alligator basking in the sun in some tall grass but his head wasn’t visible, right by him was a turtle resting on a branch and catching some rays. There were some pretty birds around the area; very elegant white ones with long orange beaks and aqua blue eyes. A black bird resting on a tree had his wings spread wide like he was trying on a new gown and checking himself out in a mirror. Vultures flew between the tree tops and gator prints were visible on the muddy banks below us. It was amazing how full of life the area was considering our proximity to a city. 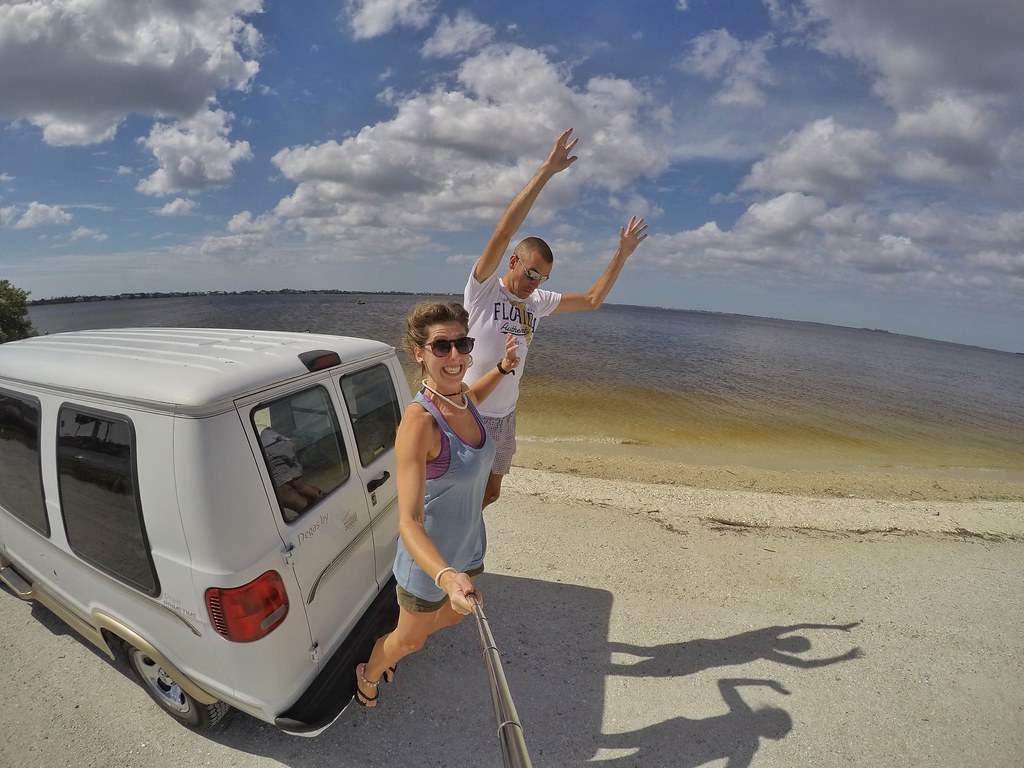 In the afternoon we headed to Sanibel Island. I was really looking forward to going there as its one of the worlds best locations for shelling and is home to pretty beaches, dolphins and manatees. Most of the bridge tolls we’ve paid have been a buck max but this one cost $6. Nevermind, it’ll be worth it I said. Then we found out that parking for each beach cost $4 per hour with no option for a day fee. It gets better because we were then told that the Ding Darling National Wildlife Refuge was closed on Fridays…guess what day it was! But it’s ok because they had a walk we could do without entering the closed section…but a goddam alligator had taken over the trail with its babies so that was closed too. Oh for goodness sake! The wildlife area was where we were hoping to see Roseate Spoonbill birds which basically look like flamingoes but with funny beaks. There was a nearby nature walk which was open but charged $5 per person for a measly trail. Sanibel was one of the most money grabbing places we’ve ever visited. 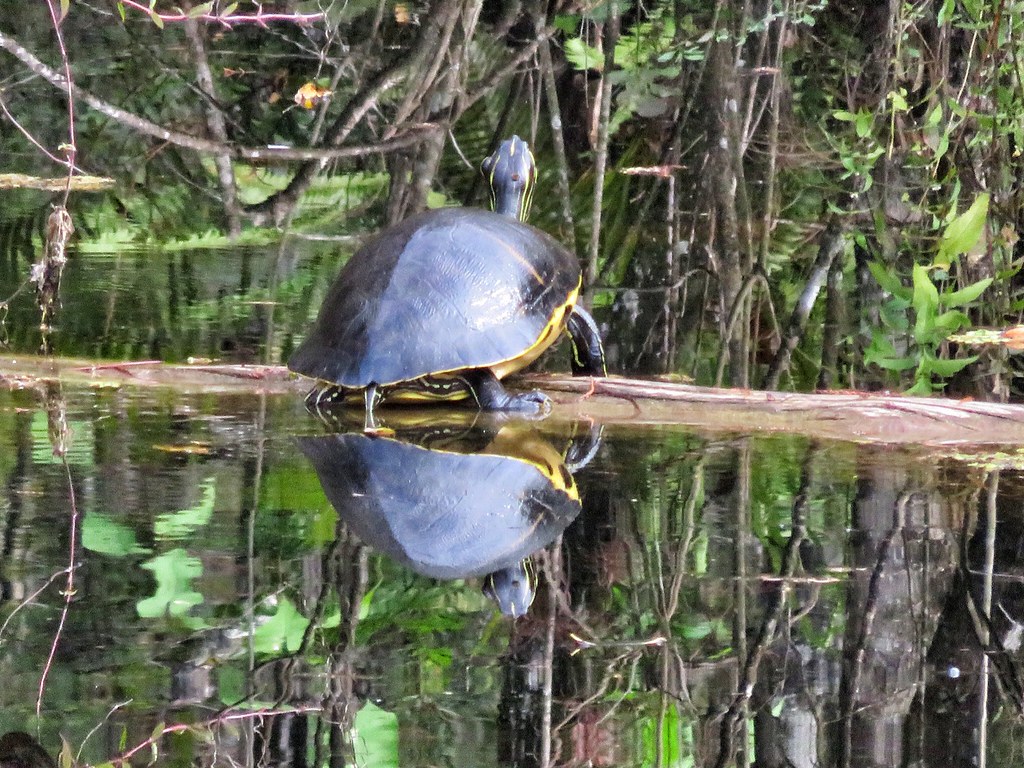 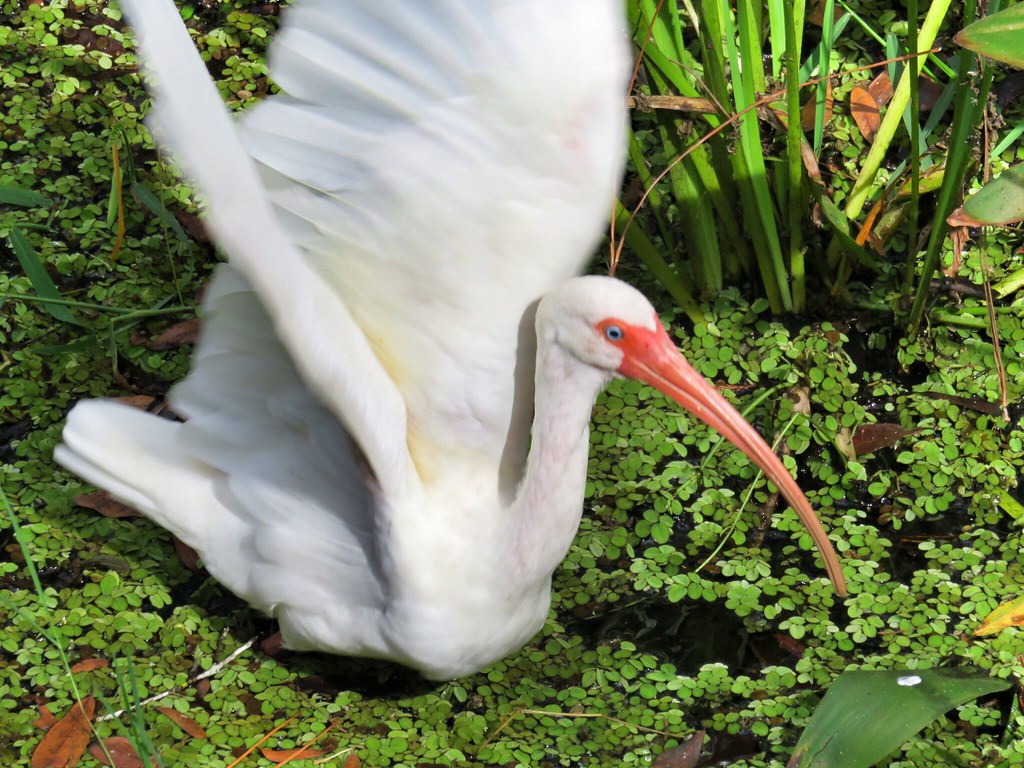 We opted for a very brief visit and went to the north end of the island where we crossed a bridge onto Captiva Island and payed for an hours parking. I really wanted to find some pretty shells so after a dip in the sea to cool off Craig came and helped me find some keepers. It was like a competition with the time restraint. I didn’t find any whoppers – those ones are claimed by the professionals who turn up before sunrise and scan the beach with torches, but I did find some very colourful shells and nice spiral ones too. We crossed the bridge to check out a little bit of Sanibel islands shelling and it didn’t have half as many shells, just lots of washed up dead fish. And then our time was up, we left the shitty island and instead found a nice spot along the causeway where we could park right on the beach. It was extremely windy and I had the most awkward solar shower trying to chase the spraying water in the air. 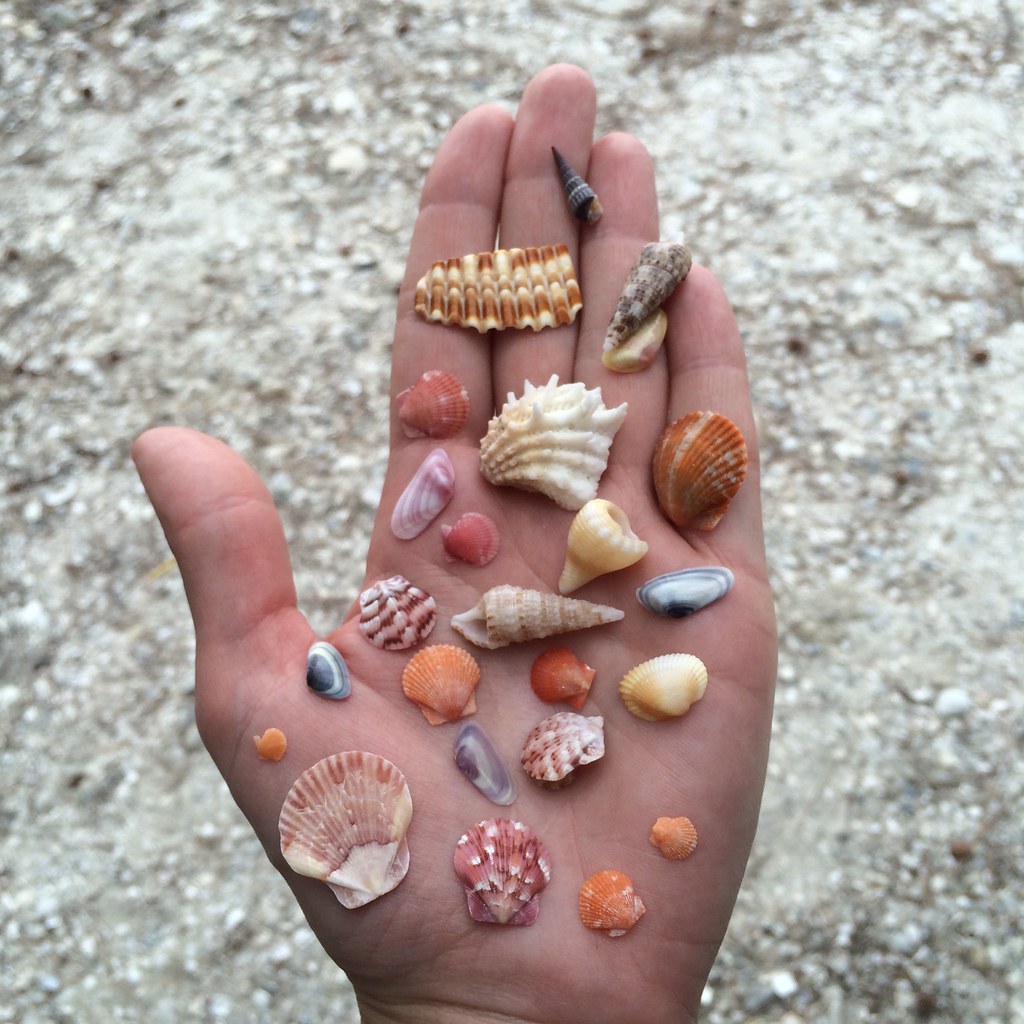 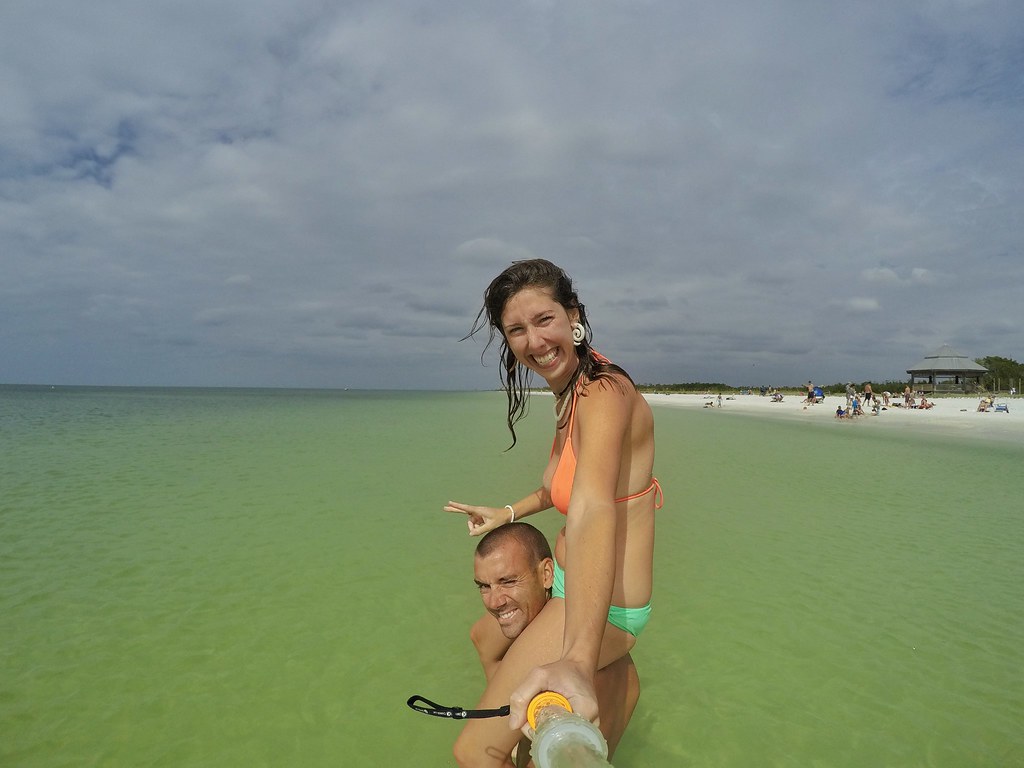 The next day we visited Lovers Key State Park which did cost a lot, $8 per vehicle but at least we could spend all day there, on Sanibel island it would only get us two hours. It was a nice state park with nature trails and a couple miles of white sand beach. Warning signs at the back of the beach said alligators could be present as the river was just behind the beach. Other signs also warned us of stingrays in the sea and advised us to do the ‘stingray shuffle’ to give them warning so they can leave the area. Luckily we didn’t encounter either. 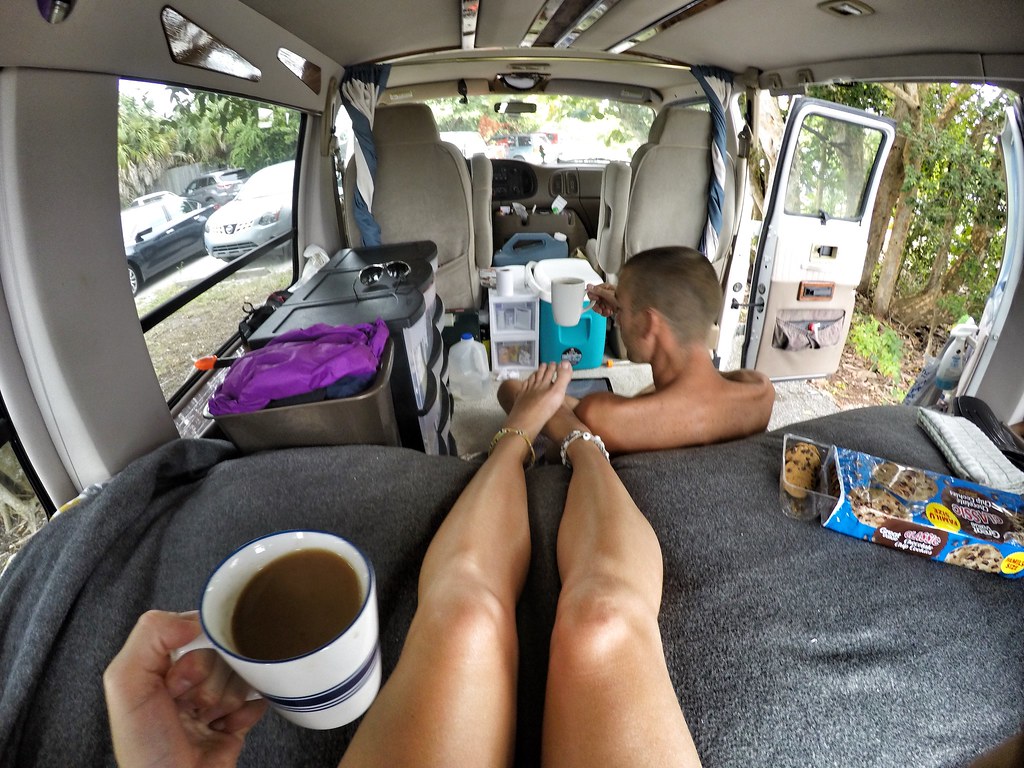 We wandered along the beach and found that the shells were just as abundant as on Captiva Island. We played in the sea and wandered along till we reached a beach hut with restrooms and showers. After lunch back at Daphne we headed out on a nature walk. It wasn’t the most riveting walk but it was a pleasant stroll through forest and along a canal. No gators were spotted but we did see a few turtles who made burrows in the sand beside the path. One was right out his hole enjoying the sun. We came across a beautiful golden retriever along the trail so we made a big fuss of it and the sweetheart went up to a turtle hole and then just sat next to it looking down at the turtles button poking out the hole. Apparently she loves turtles and helps people locate them. She’s even been featured on CNN. 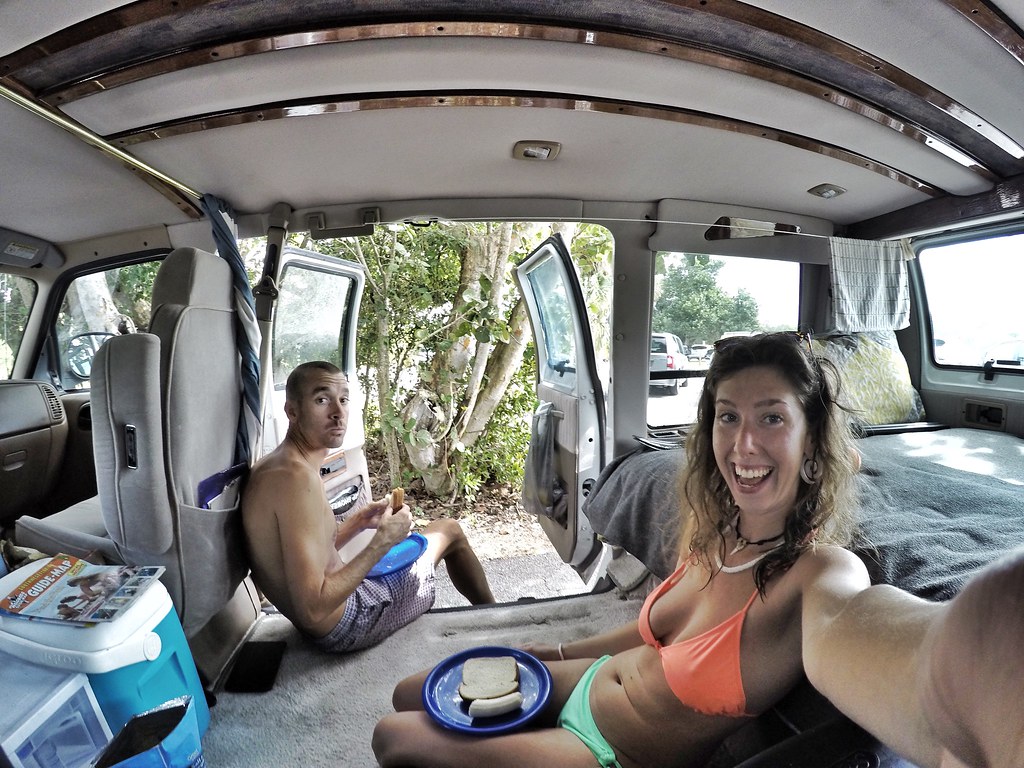 A trolley service took people to the beach so we hopped on this time after just doing a walk. When we arrived back at the beach an armadillo was licking water off the ground. It was the first armadillo we’d ever seen and a bloody hideous animal. It had an ugly pink face like a wild pigs, chicken style feet and a back shell like a rhinos. 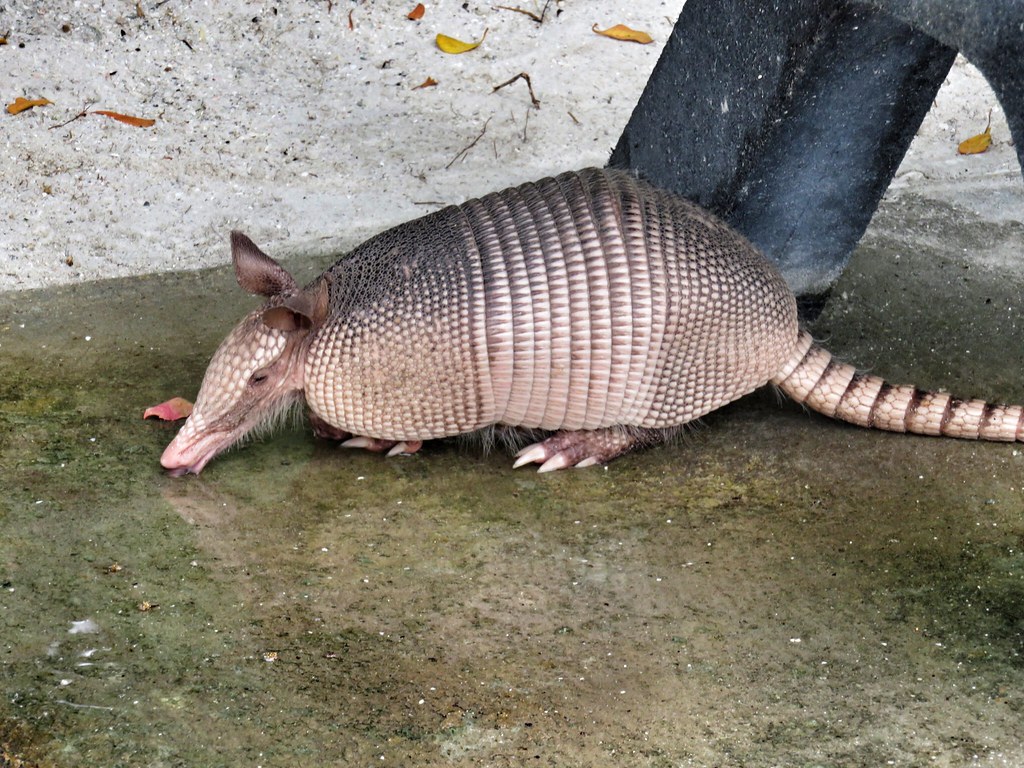 When we checked the wifi at the end of the day we were no longer headline news on The Mail, Maria Carey had taken that place but it was funny to see that for just a few hours we were more important than Maria’s bulging cleavage.