We hadn’t seen the sea since Alaska so we were keen to hit the coast and watch the sun go down. It proved to be rather difficult to find a place to watch the sunset though as every road we took was lined with private property and fancy houses…bit mean calling a road Sunset Boulevard and getting to a mansion at the end with no trespassing signs. We did eventually find a beach at Hudson but it was very disappointing, the ‘beach’ was a yucky shoreline and the water was green, then the sun dipped and stained the sky the colour of grey water. Brilliant start.

The next day was much better though and it started with a delicious lunch out with a lovely friend of my mums who she met while working in New York back in the 80’s. We were advised on some nice places to visit on our way south and hit the road along a narrow piece of land running parallel to the mainland. We found free parking at Indian Rocks Beach beside some brightly painted beach cottages. A short stroll led us onto the white sand beach and calm Gulf of Mexico. An extremely bronzed couple called us over to ask where we were from…they wouldn’t of heard us talking from that distance so I have no idea how they knew we were foreigners, do we walk differently? They were very jolly and friendly but the lady was gurning pretty badly and had such a strong accent “ya’ll get ya suits on and I’ll take ya to the sand bar and we can dive for sand dollars…what are you waiting for? Go put ya suits on!”. So we went to get our gear and then darted off in a different direction of the beach while pointing at the birds in the sky to avoid making eye contact and having to go diving for sand dollars with a potential crack addict. 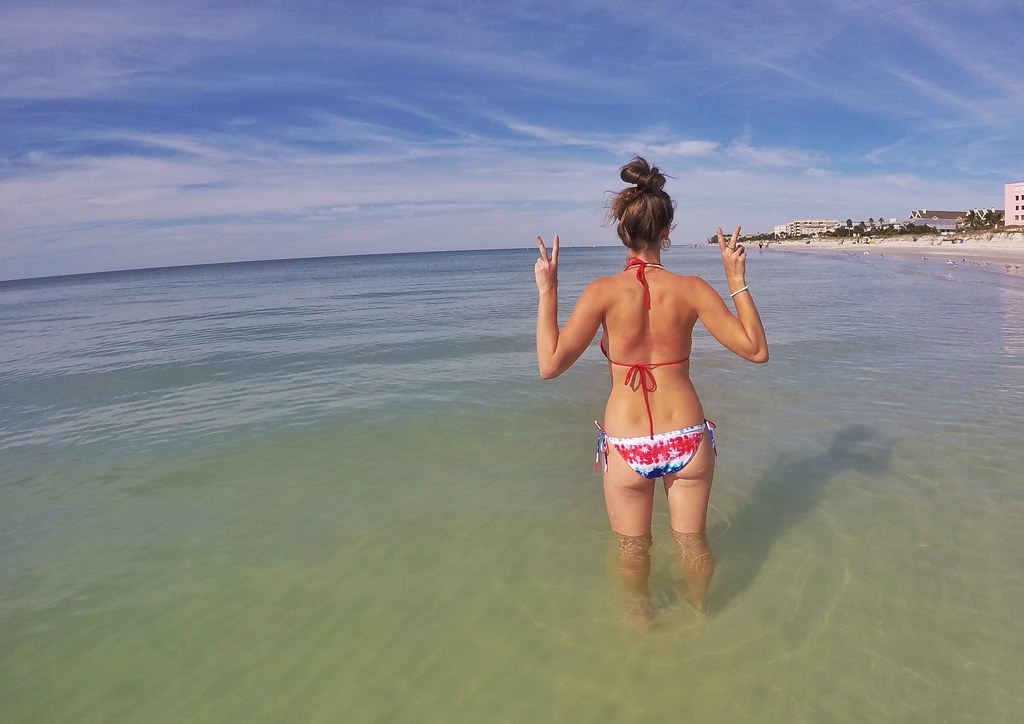 We continued down the coast onto Treasure Island and picked up some veggies and dips for an easy and healthy dinner at the beach. We took our camp chairs along and pitched up a couple meters from the gently rolling shoreline and enjoyed dinner while watching the sun go down. Huge Pelicans were flying over the sea and diving down to catch oblivious fish. The sunset turned out to be one of the best on this trip and the clouds looked like they had been photoshopped with such vibrant pink colours. When the sky began darkening and turning a deep red colour the shoreline turned into a wild jacuzzi. It was bubbling like a hot volcanic pool so we got up to see what was going on. Thousands of tiny fish were being pushed to the shores by big fish hunting them. The sandy shore became covered in tiny silver fish glistening like shards of a mirror. 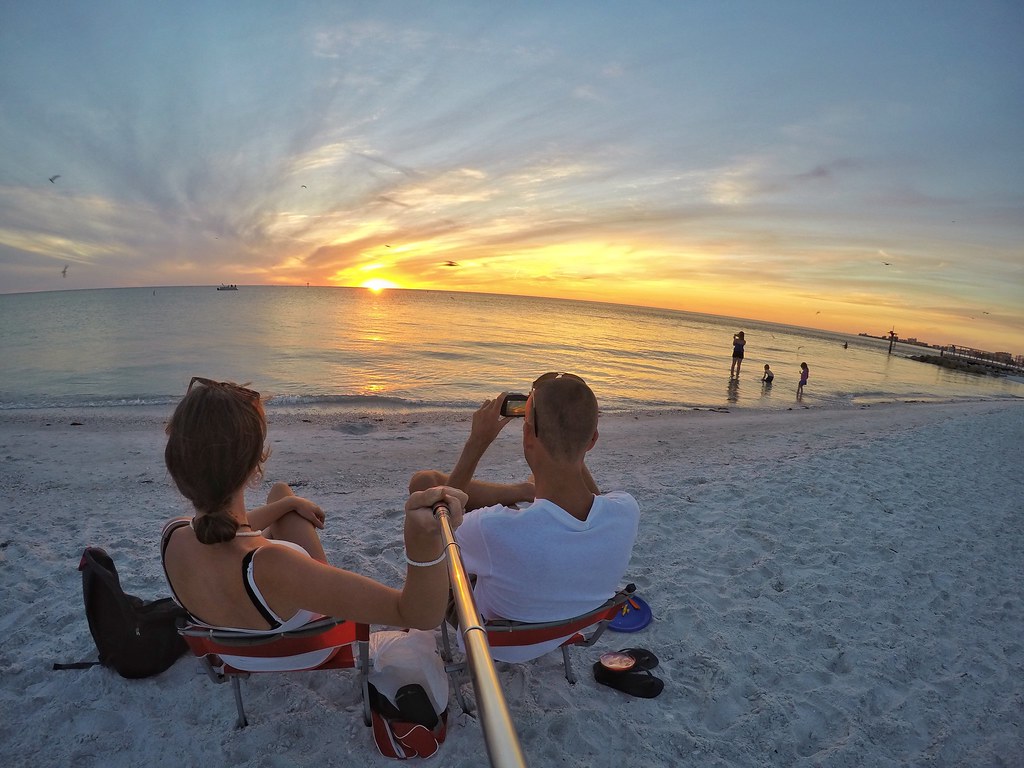 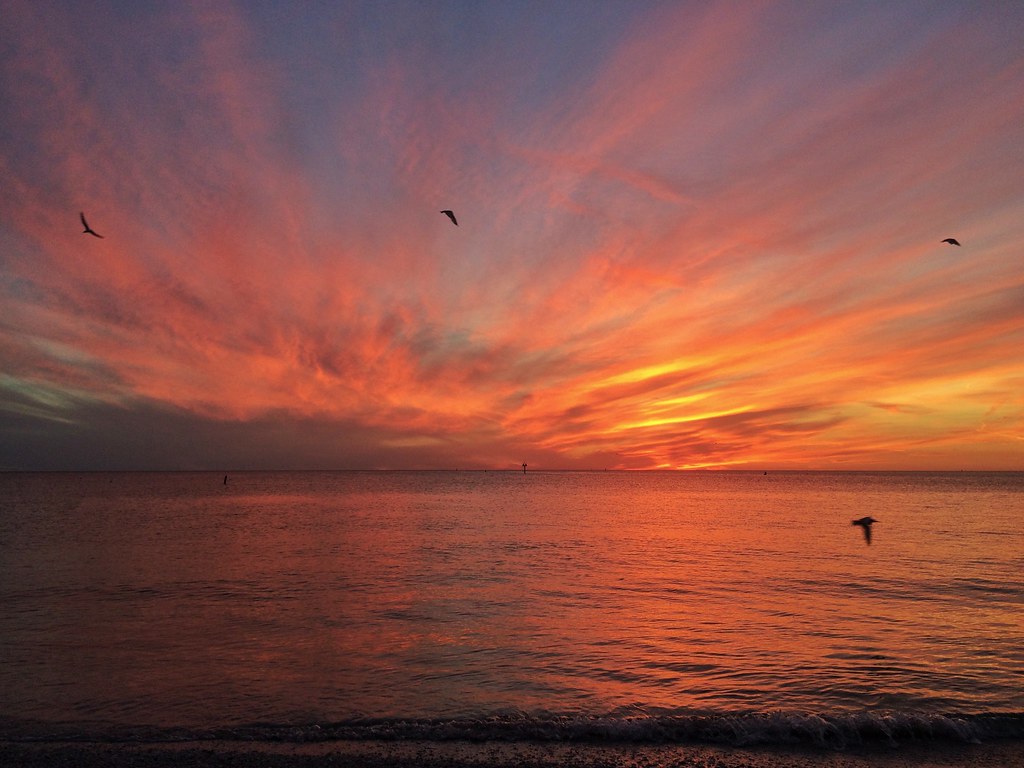 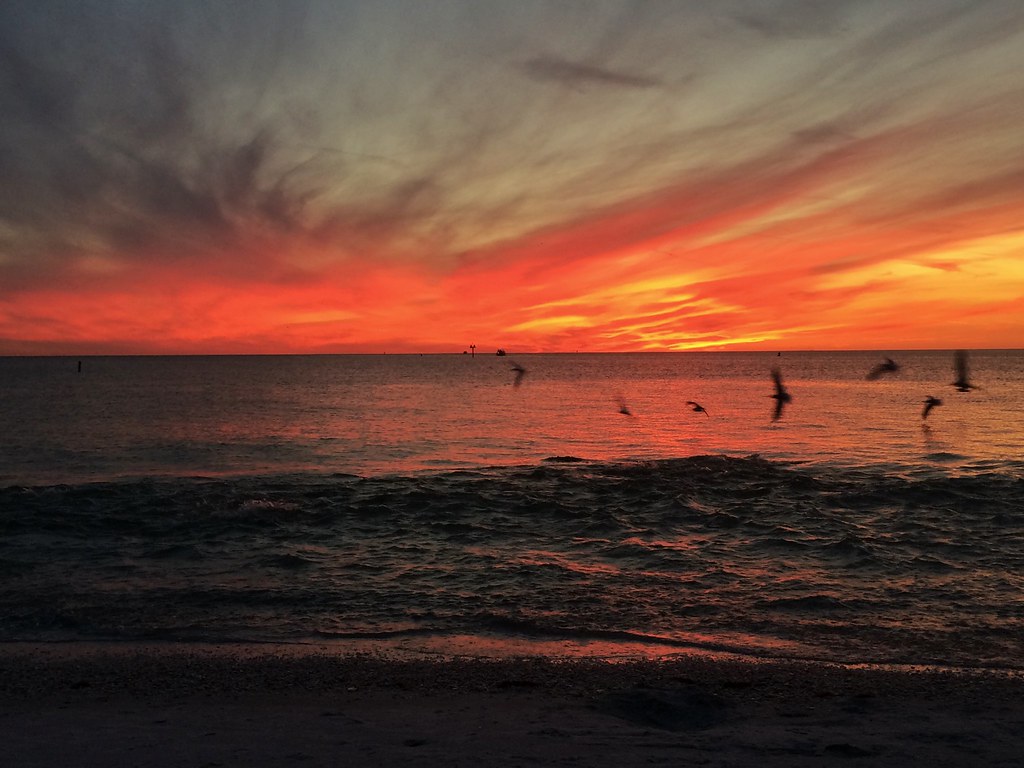 The next day we went to Fort De Soto State Park which was a little island shaped like the letter ‘F’. It had a few pretty beaches and two long fishing piers. We spent a while swimming in the northern beach which was lovely and peaceful. The Gulf of Mexico wasn’t the clearest sea but it was nice enough and wonderfully calm. Before the sun had set we wandered along the 1000ft long gulf pier. It was full of people fishing and they all had multiple rods resting on the edge. Great blue herons and Pelicans rested on the pier and swooped over our heads, I was dreading being pooped on by a bird that size. When the sun slowly began its descent dolphins started appearing around us. It was just the odd distant fin to begin with but then they came closer to the pier and were right below us. It was awesome! The current was really strong around the pier, hence the abundant fish and frolicking dolphins. The sunset began with a beautiful honey-glow and then turned into a mauve and pink tinge across the sky. As we left the pier we could hear dolphins blowing air out their spouts below us and we watched a lady catch a large stingray. Sadly we had an unsuccessful night camping at Walmart where we were moved on for the first time EVER! Luckily it was only 11pm so didn’t wake us in the middle of the night. We set off on the highway south which went over a massive bridge and had a nice rest area to stay at instead. 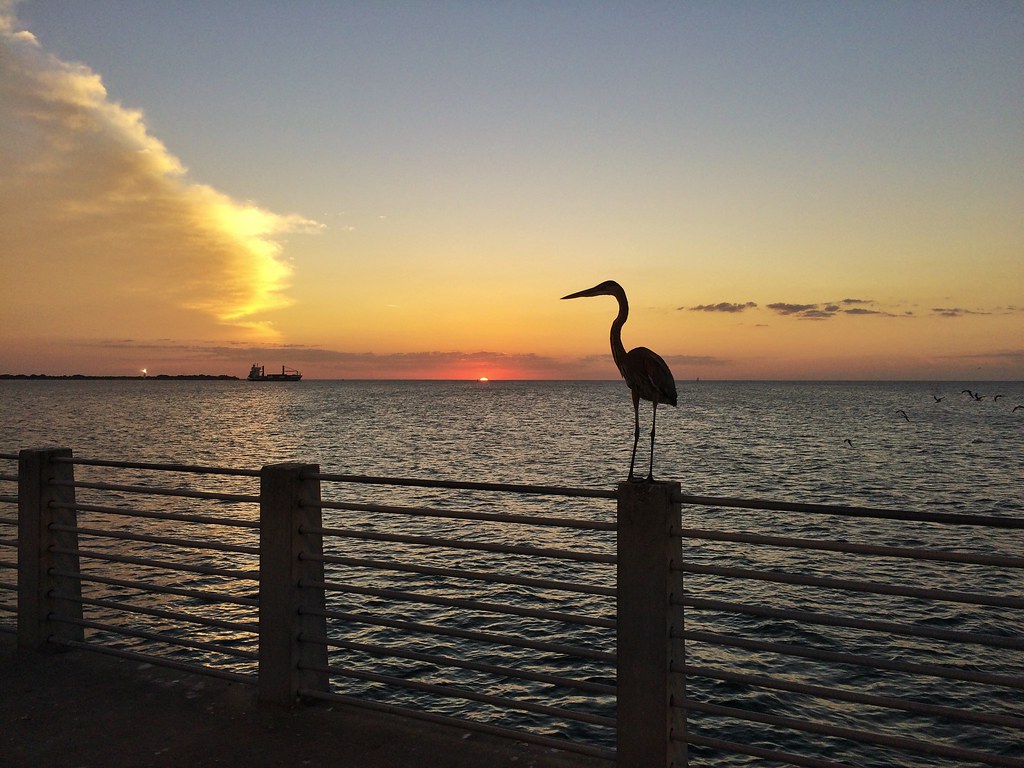 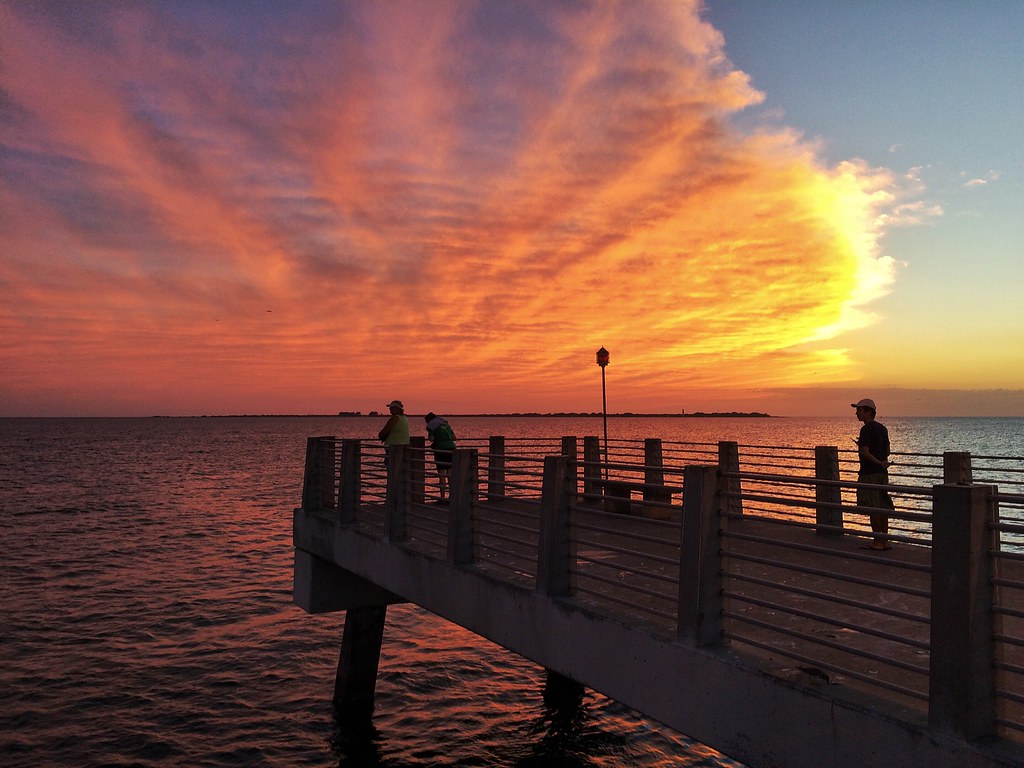 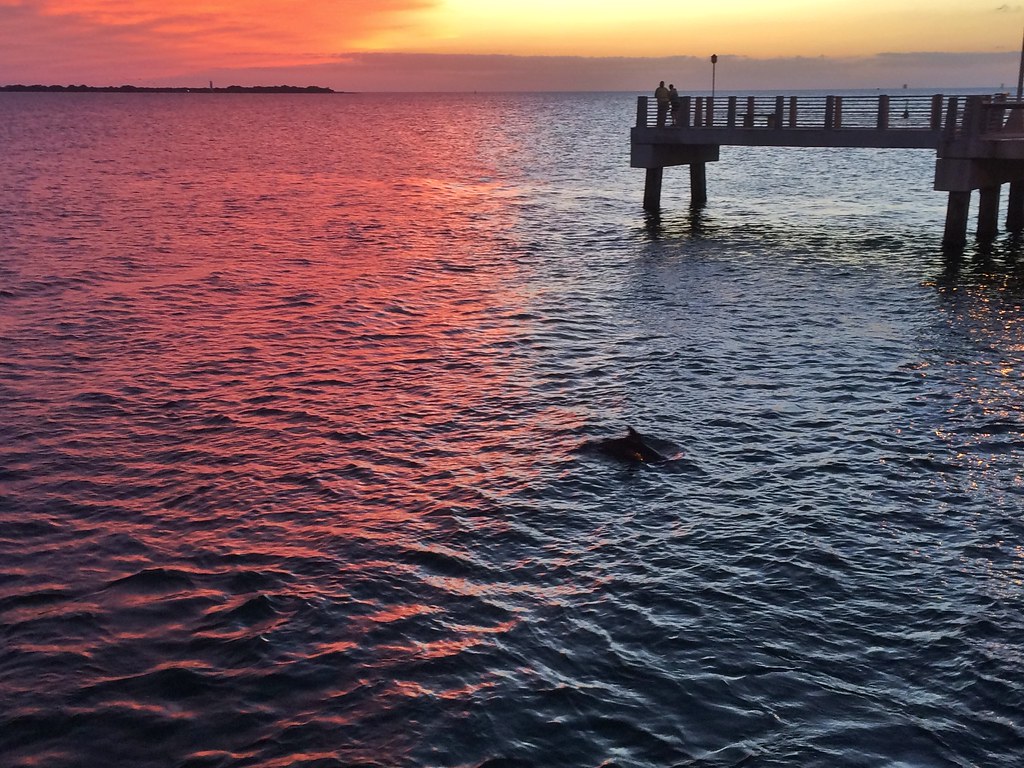 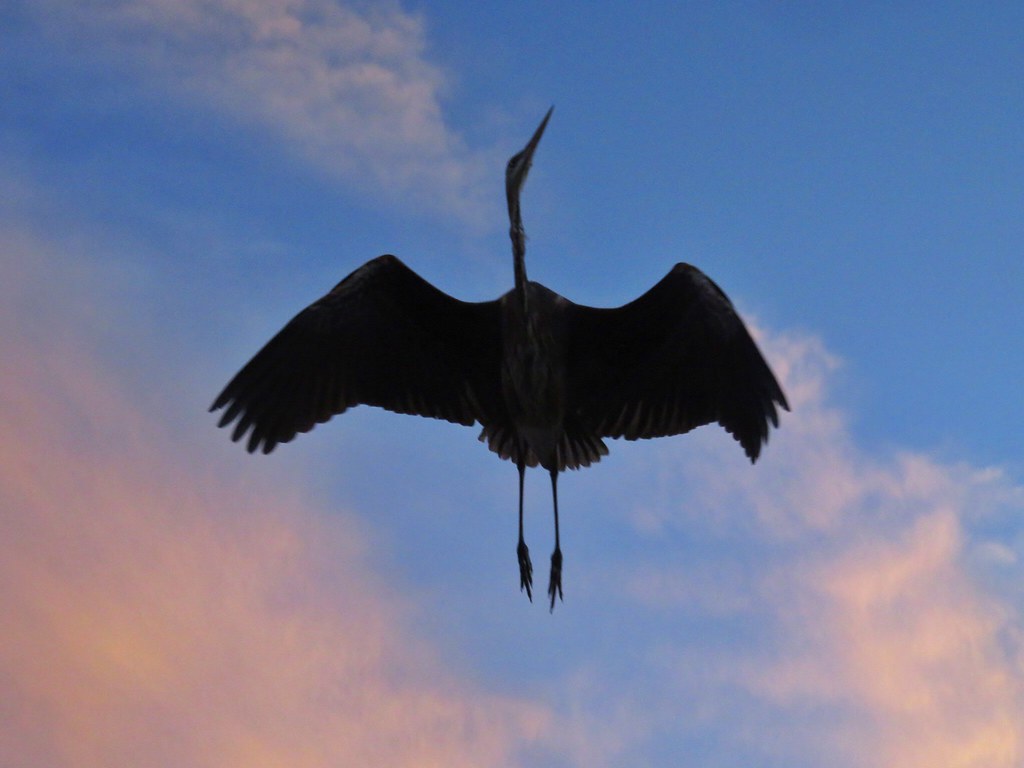 We were woken at 7.30am the next day by our campervan neighbours. A guy with dreadlocks and the worst singing voice you’ve ever heard was strumming a ukulele and singing like he was on his own in a shower. We couldn’t sleep through the strained vocals so got up, opened all the blinds and glared through our windows at the guy. We were surprised how pretty the rest area was, right by the sea and with a little beach, certainly prettier than a Walmart carpark! 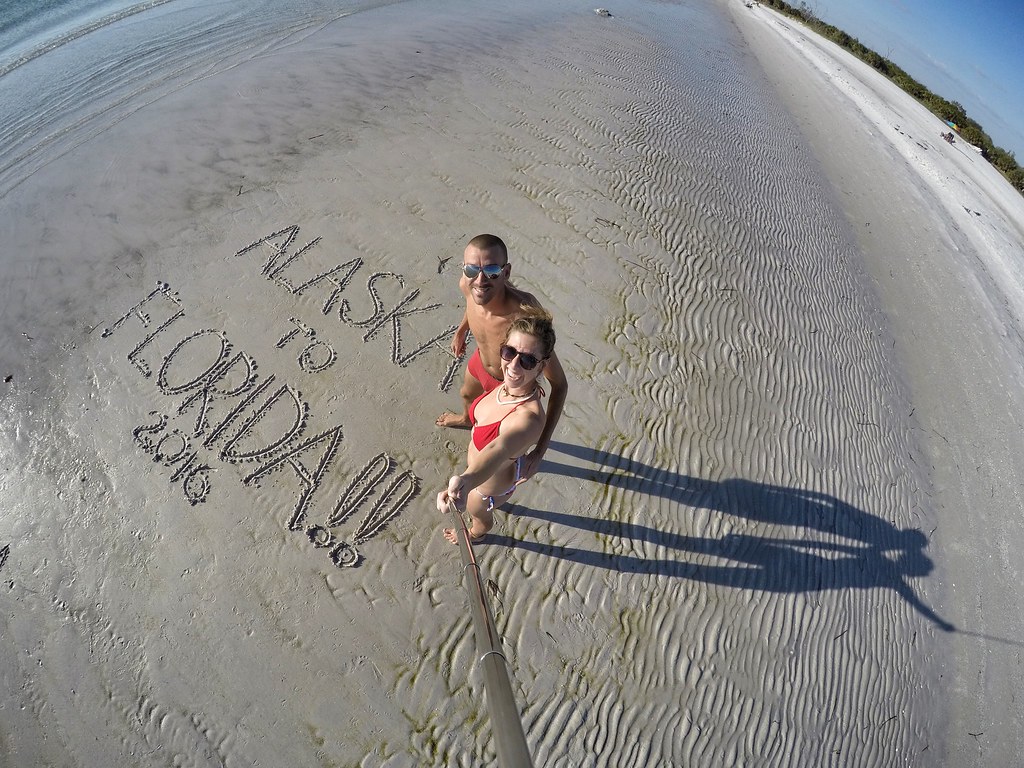 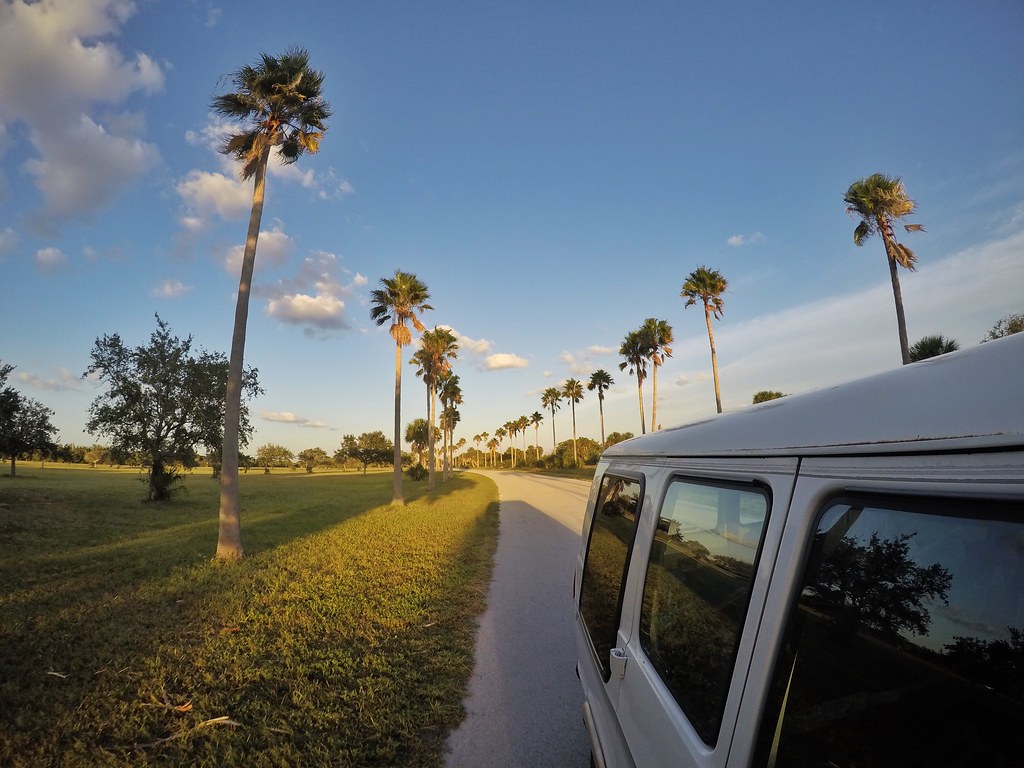 We hit the road and drove onto Anna Maria Island which was ideal for us as the beaches had free parking and beach facilities unlike a lot of the others who charge crazy rates for parking. The island wasn’t a stand out though, in fact all the beaches we’ve seen have been nice, but not wow. I prefer little curved bays but the gulf islands seem to have endless straight beaches. The sand is always fabulously white mind you. 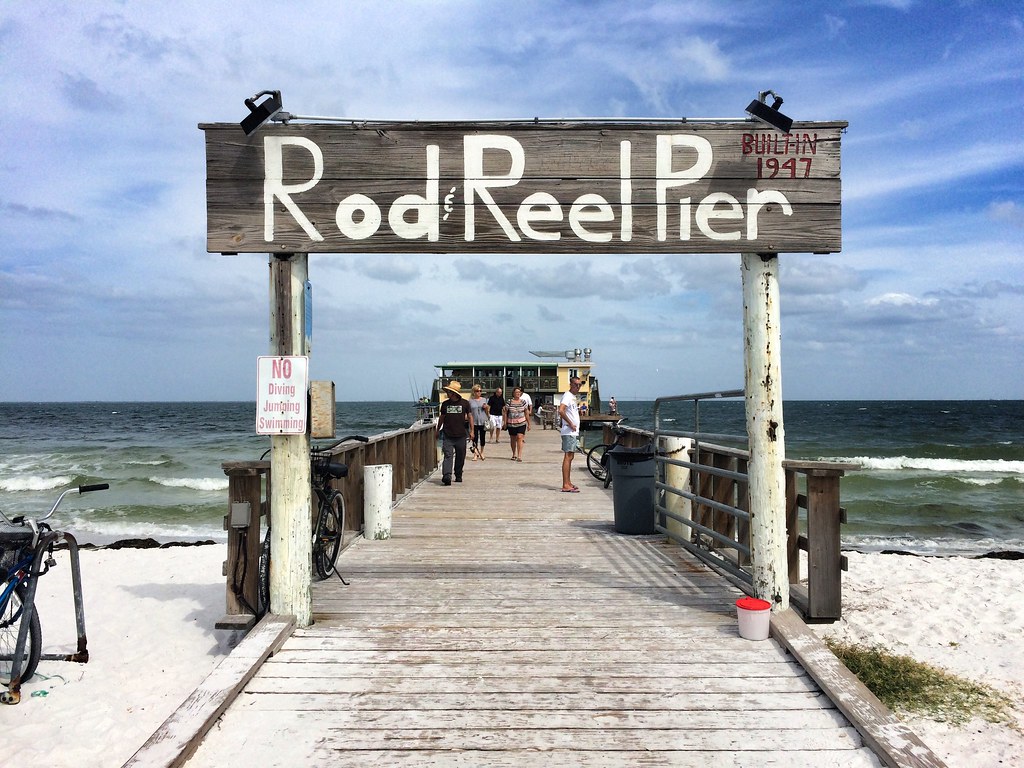 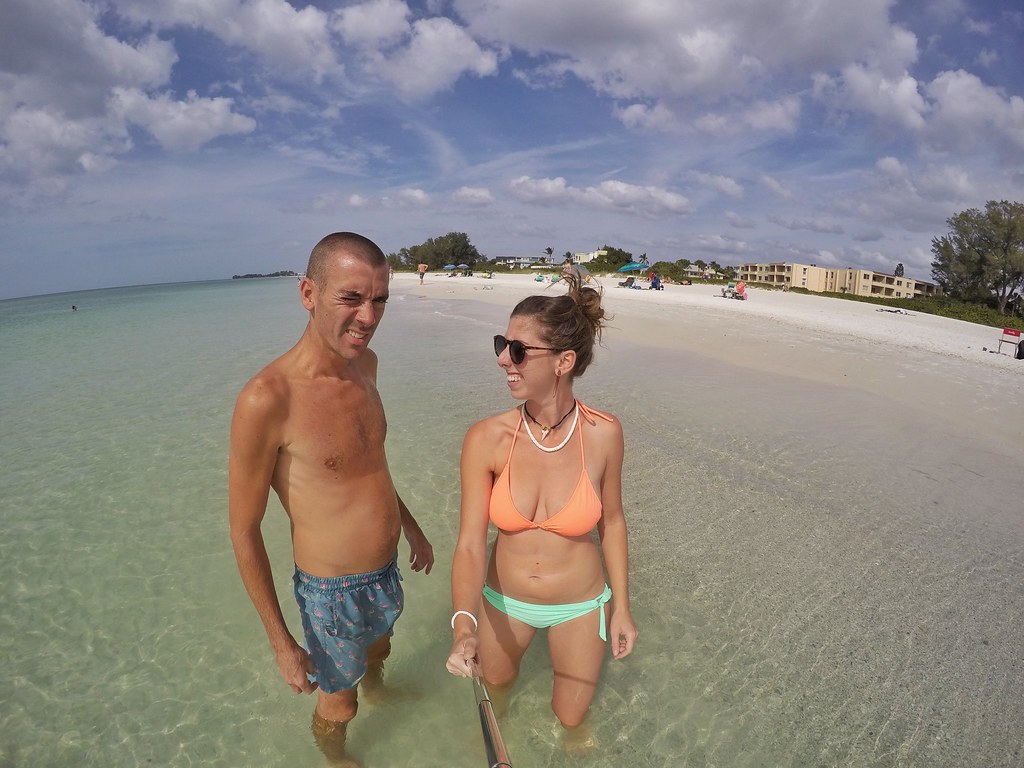