There’s only one place in the United States where you are legally allowed to snorkel with manatees and that’s Crystal River, Florida. Twenty years ago it really was a crystal river but its all murky now minus the springs that dot the Kings Bay. The most famous of which is Three Sisters Spring which was bloody closed on our visit which was such a shame. I hand-drew a map and put it in a sandwich bag for our 4 hours of paddle boarding. We managed to rent a board big enough for the two of us, not only did it save us money but it meant I could sit and relax while my gondolier paddled me to our destination. The whole of Kings Bay was developed with grand American houses. We thought the houses had big aviaries but we soon realised they were actually netted conservatories around their swimming pools to keep the bugs and animals out. 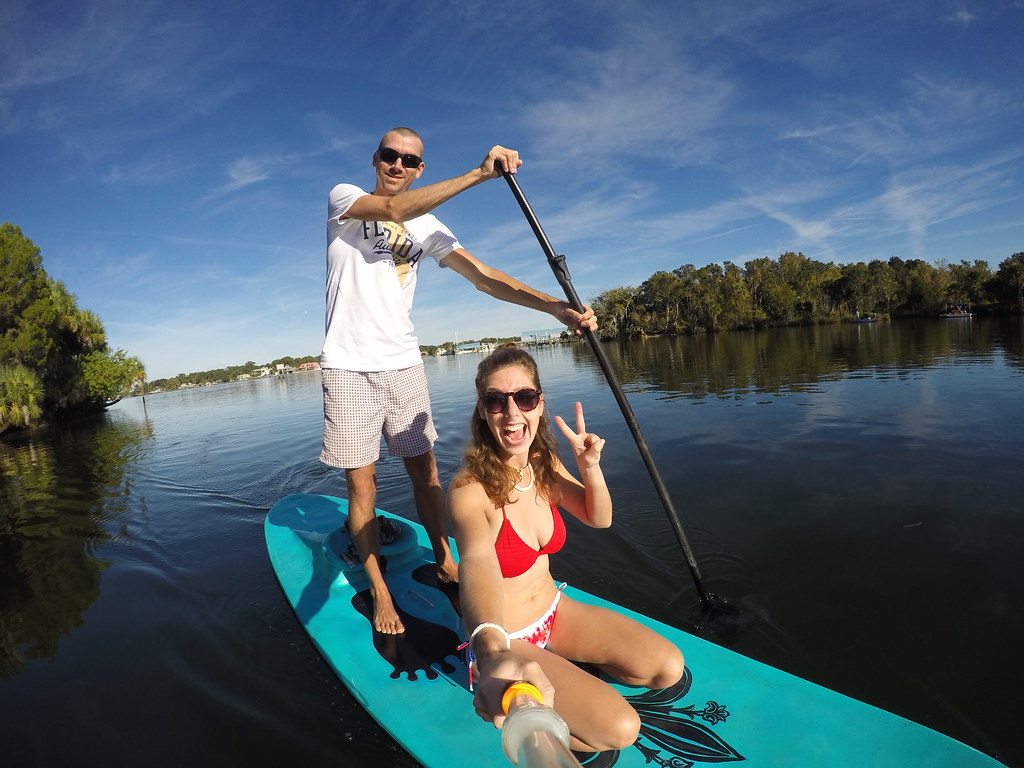 It was a nice calm morning leaving Hunter Springs Park and all the houses and their fancy boats reflected in the waters. It didn’t take long before Craig spotted an alligator so we went a little closer to check it out, totally shocked that there was one in this bay. Then we realised it was a rock and both laughed, hah, nice one craaaaaig!! Cormorants were drying their wings along piers and fish kept jumping out the water. They looked like miniature humpback whales doing full body dives through the air and slapping their bodies on the surface. The manatees live out at sea until winter time when the water becomes too cold for them. They then swim to the fresh water springs which have a constant temperature of around 72 Fahrenheit so they can survive the ‘cold’ Floridan winters. Up to 2000 manatees come to Crystal River in winter, but we were too early to witness that. Luckily this year about 50 manatees have hung around so they were the ones we were hoping to see. They could be anywhere so we were told to ask people we passed. Some kayakers said they saw one under a bridge which was on our route anyway but we didn’t spot any. Then in the distance we saw something move in the water, and once again Craig declared it was an alligator. When we got close enough we were delighted to see that it wasn’t a gator but a manatee! In fact there were two manatees and they’d just come up for some air. It was a mum and calf (both huge) and they swam under our paddle board. I stood up to join Craig for a better vantage point, it was a little wobbly and I was petrified about capsizing in the murky water but I couldn’t sit back down as it was so magical watching them effortlessly swim below us. Another manatee appeared and we had three around us! 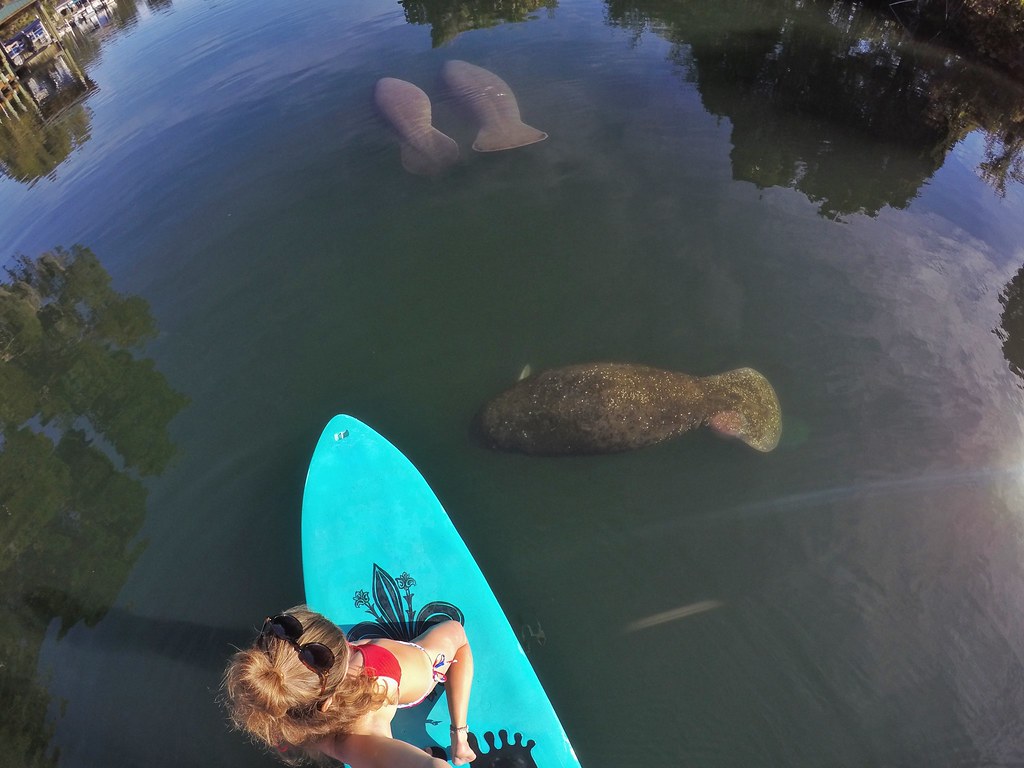 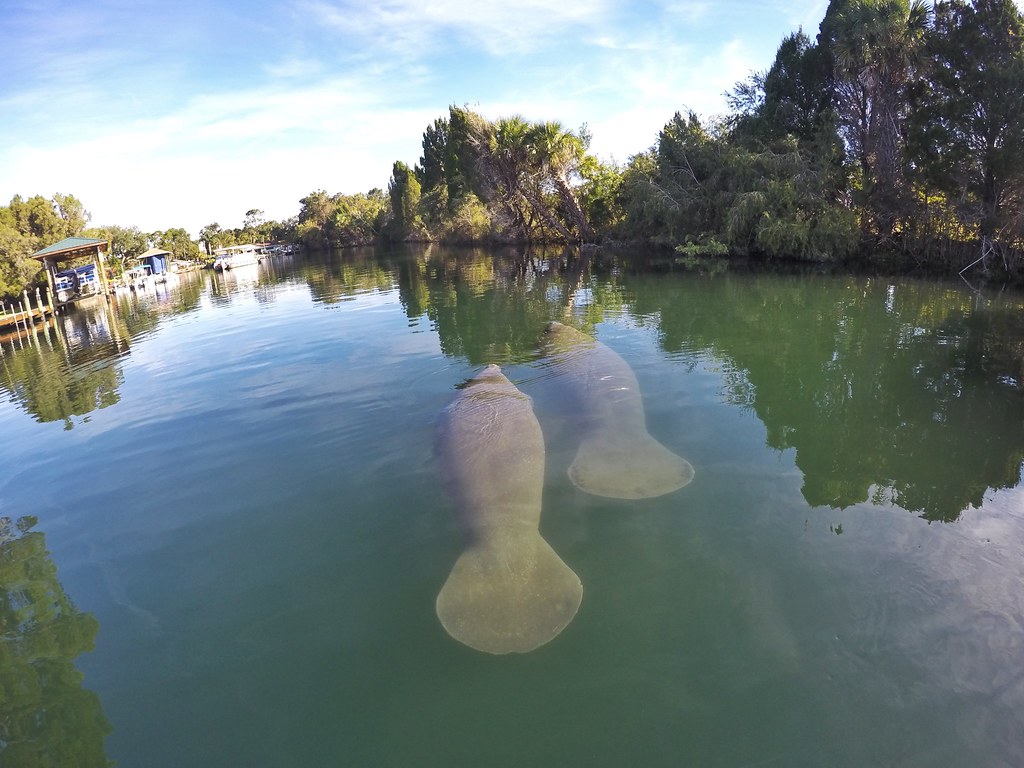 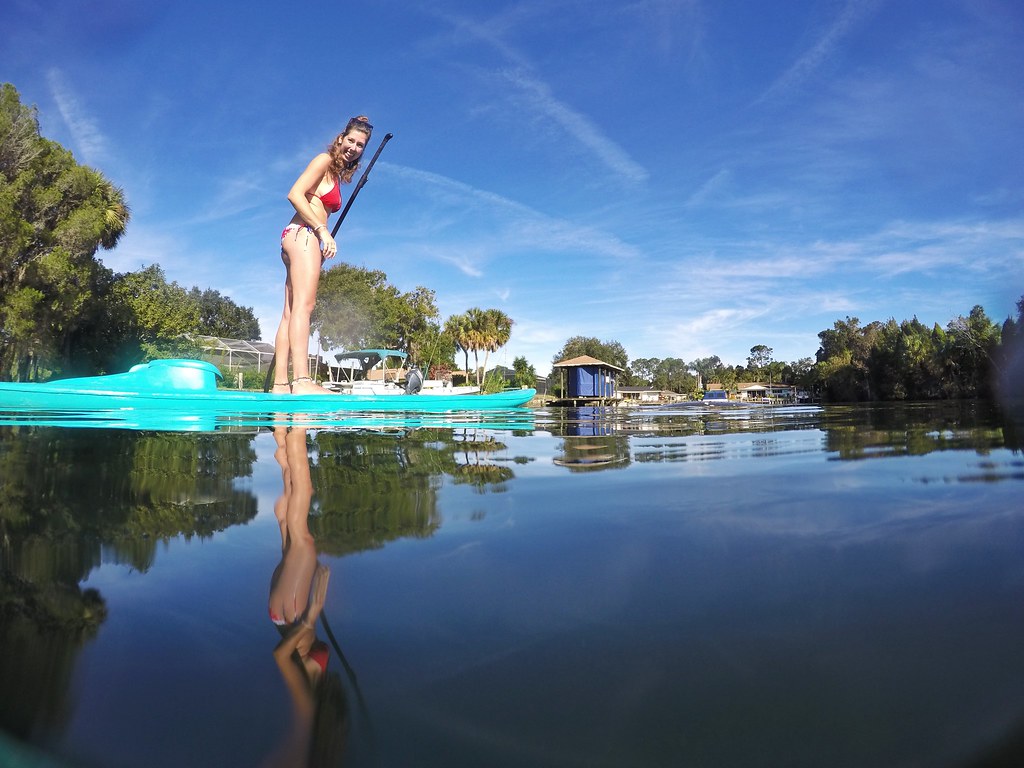 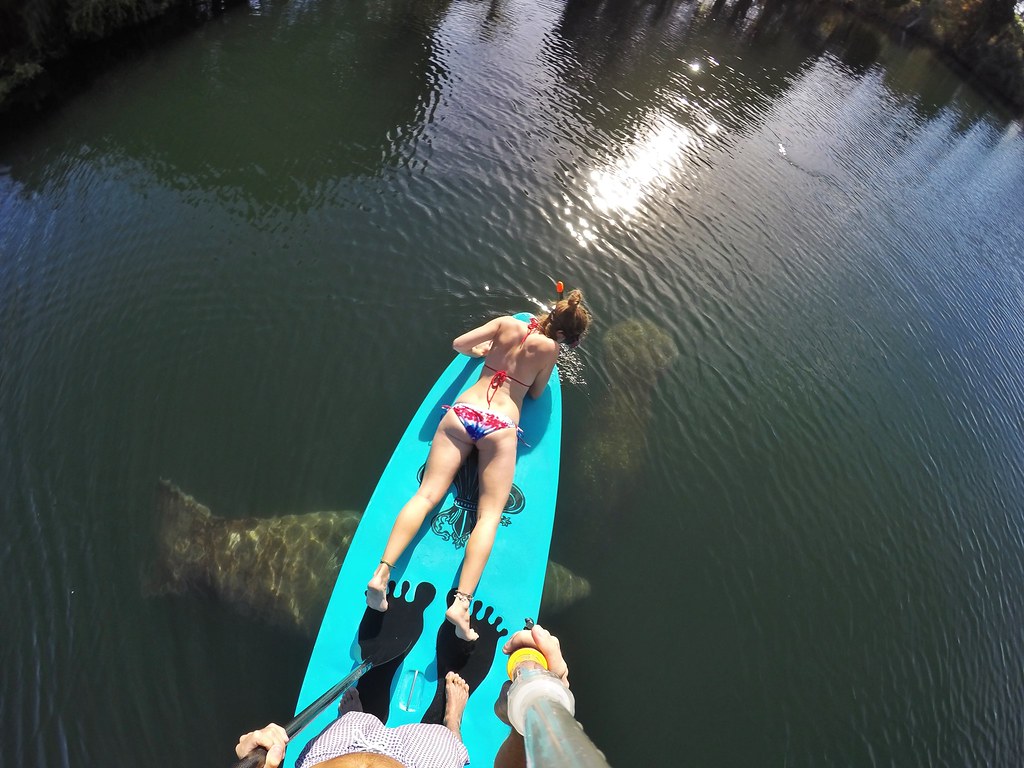 One lady was snorkelling in a wet suit further up a canal and Craig said we should snorkel too. I hadn’t anticipated seeing them in such murky water, the thought of snorkelling in it scared the crap out of me and the fact that we’d had two false alarms for alligators didn’t help. A huge manatee covered in white barnacles came by us and Craig eased himself into the water on his own, telling me that it was a little scary at first but I had to try it…I couldn’t though, I was petrified of going in. When Craig got back on board I decided to try snorkelling by lying flat on the board and sticking my head in the water; it didn’t really work and was actually quite creepy as I could only look straight down, so I didn’t know where the manatee was until a giant grey body appeared 10cm from my face. I gave up on that success story and we ventured back to the first spot where we saw them. One manatee came right up to our board and just hung around by us. A snorkelling boat was slowly coming our way, we’d only seen a few boats all day and each one only had 1-5 snorkelers on board but Craig said now was time for me to snorkel before the group of snorkelers did. I slowly, and rather reluctantly slumped into the water and held onto the edge of the board while trying not to have a panic attack about how dark and scary it was below me. The manatee was right by me so I was trying to swim away and move around the other side of the board to give the animal space. 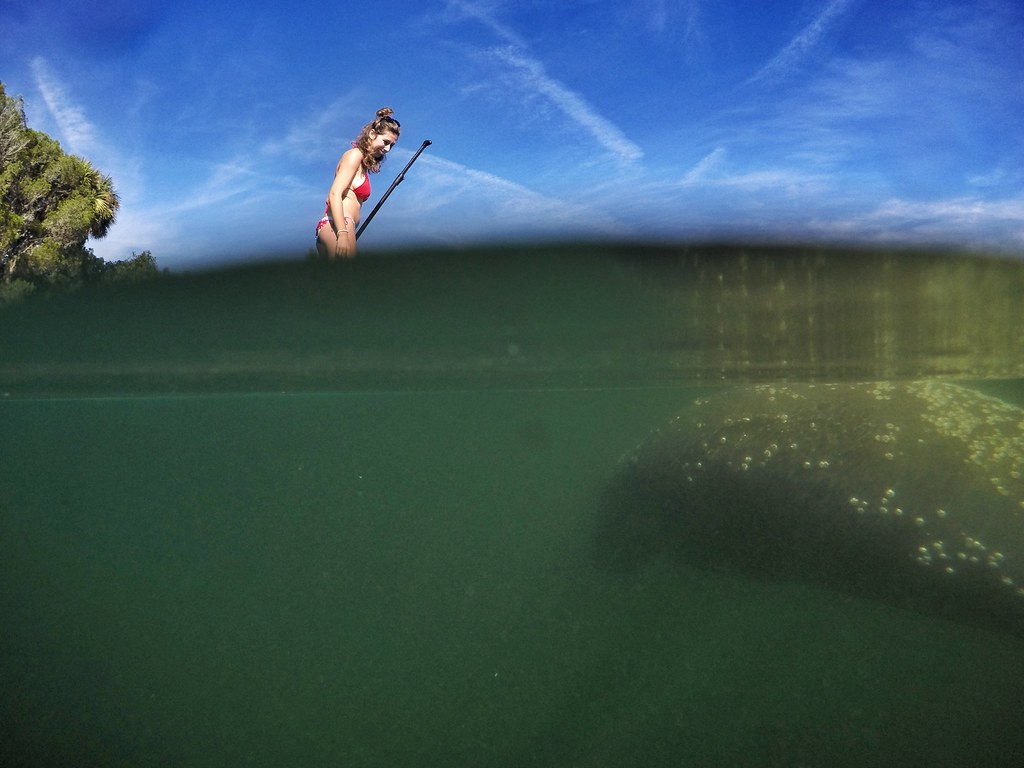 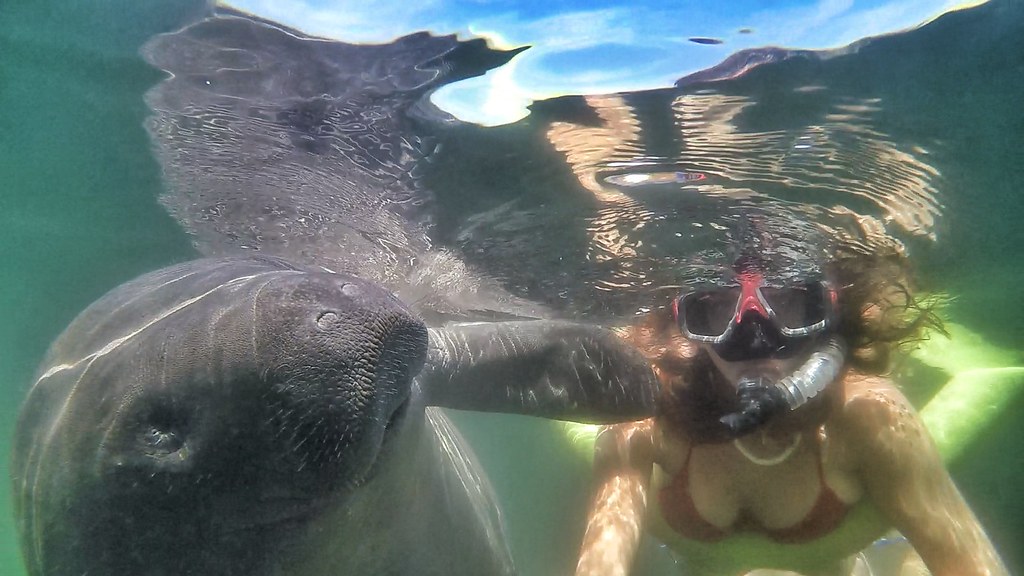 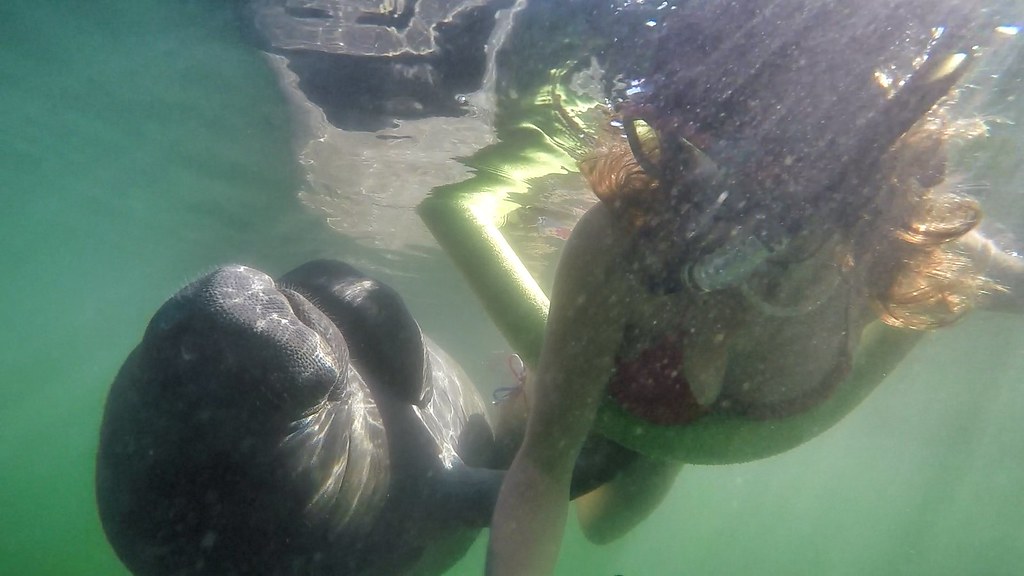 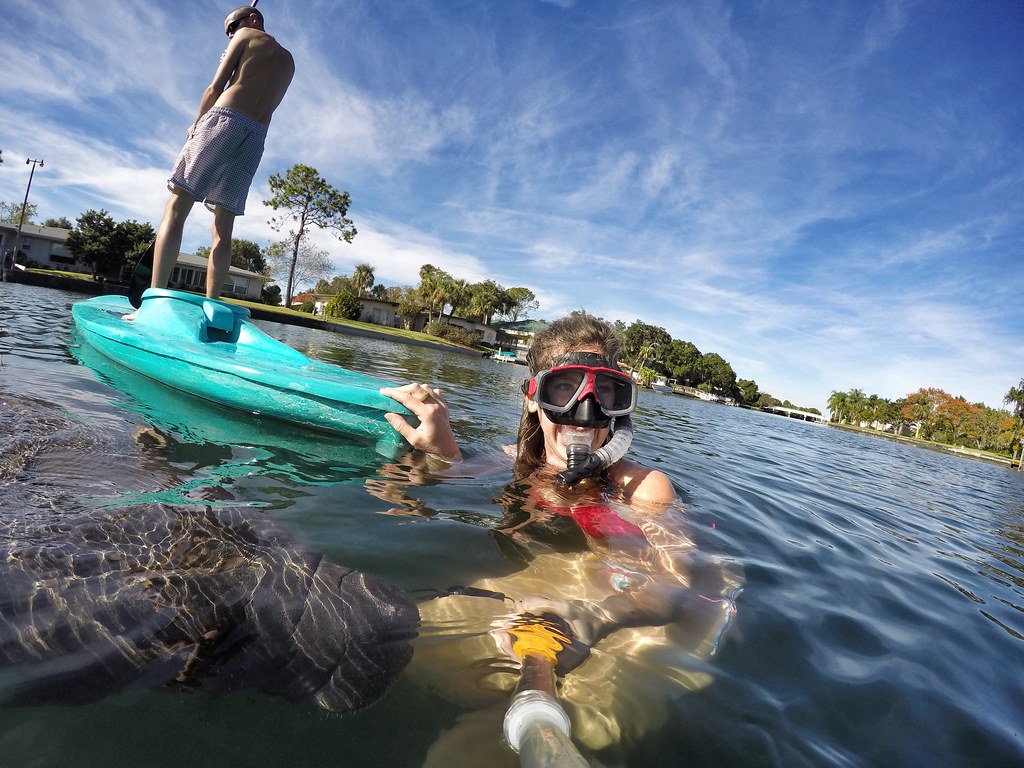 It’s illegal to touch manatees (and other wildlife for that matter) but the manatees are allowed to touch us. I didn’t want the approaching boatmen to think I was getting too close so I kept trying to swim away from the manatee but I didn’t seem to be getting anywhere as the manatee just followed me. The boatman called out and said I needed to just float and stop treading water, the manatee won’t hurt me and he said I needed to be quiet or I’ll scare it off. My panicked squealing didn’t seem to scare it off at all though, if anything it attracted the animal to me. I explained to the man that I wasn’t scared of the manatee, I just didn’t like swimming in murky water and they kindly threw me a noodle to keep me calmer and float easier. So, I followed their instructions and just floated and the manatee came face to face with me. He then came to my side and wrapped his fin around my arm! I couldn’t believe it! I moved my arm away not wanting to touch the animal but then he did it again, curving the end of his flipper/hand around my wrist and my heart melted. I felt like he knew I was scared in the water and was trying to comfort me. I could hear the boatman calling out to the snorkelers who had paid for a boat trip saying “wow guys, check out the manatee over there, he really likes this girl!” So then I had a few people watching the manatee interacting with me and he put on another adorable show by lifting my hand with one flipper and resting it flat against his right flipper and then pressing down with his left flipper to keep my hand there. It was just incredible and I felt so safe with this awesome guy hanging onto me. Once I was more comfortable he began showing off and spinning around revealing his big tummy and swimming under me touching my belly as he went by. I was squealing with excitement the whole time. He then went under our paddle board and held onto the sides and lifted his head out the water onto the board. It was such an amazing experience and I was so happy I braved the murky depths. Craig had come into the water too and the manatee seemed to sniff him and hang out by his side before linking arms with me again. 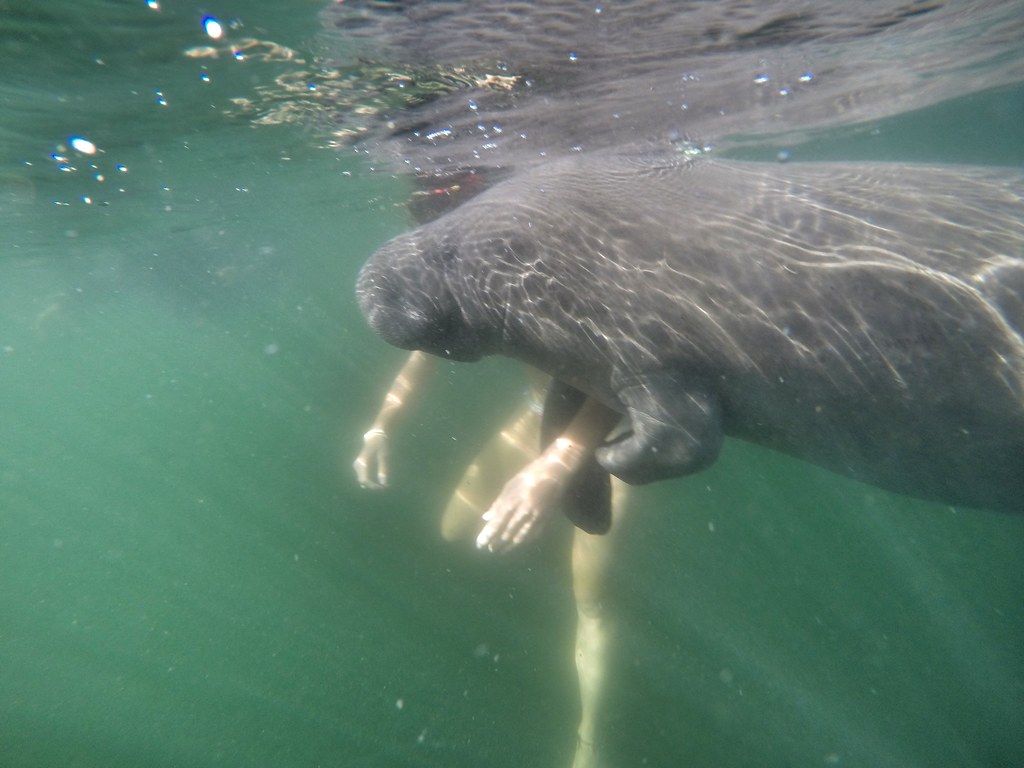 It was really amazing seeing these incredible animals underwater, it’s hard to see what their faces look like until your face to face. Their eyes were really bizarre, sort of like a little cats arse hole and suddenly it would open and a tiny white dot of an eye would be looking at me. Haha, man that sounds so gross….they were really odd eyes! It got pretty chilly in the water after a while, we were the only people not wearing wetsuits so we warmed up on the board and headed down the canals to where Three Sisters Spring was closed off. The water was slightly clearer round here from the spring run off and we spotted a couple more manatees who Craig snorkelled with but the construction work nearby filled the clearer water with debris and none of the other manatees were as sociable as the first one I swam with. 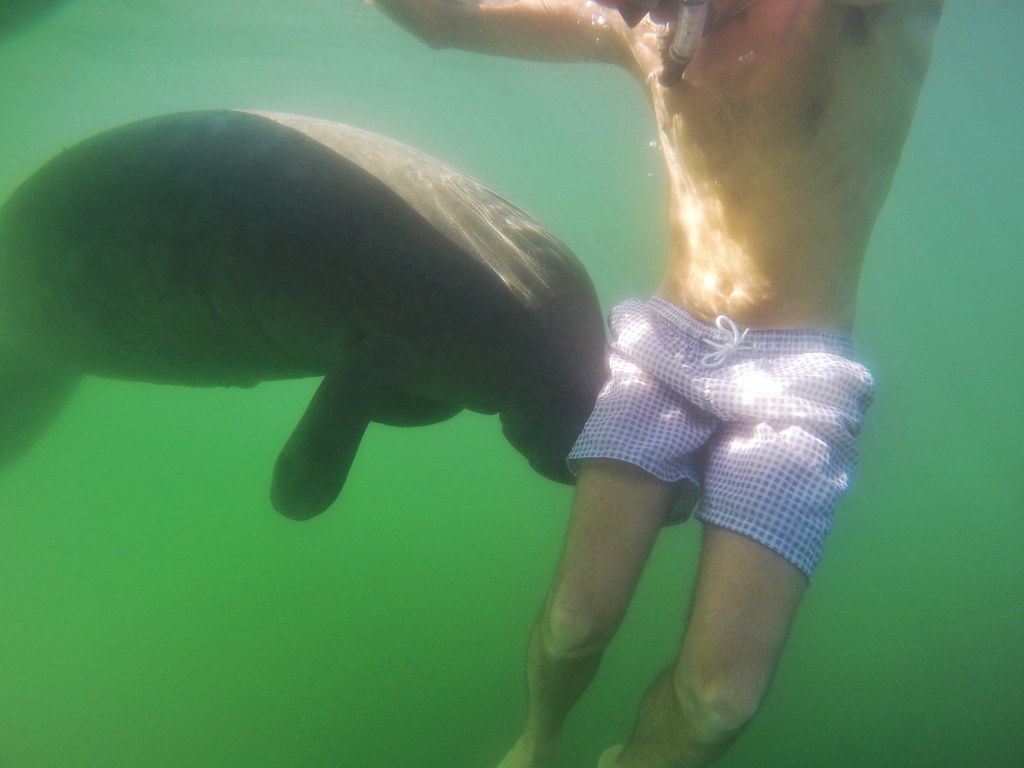 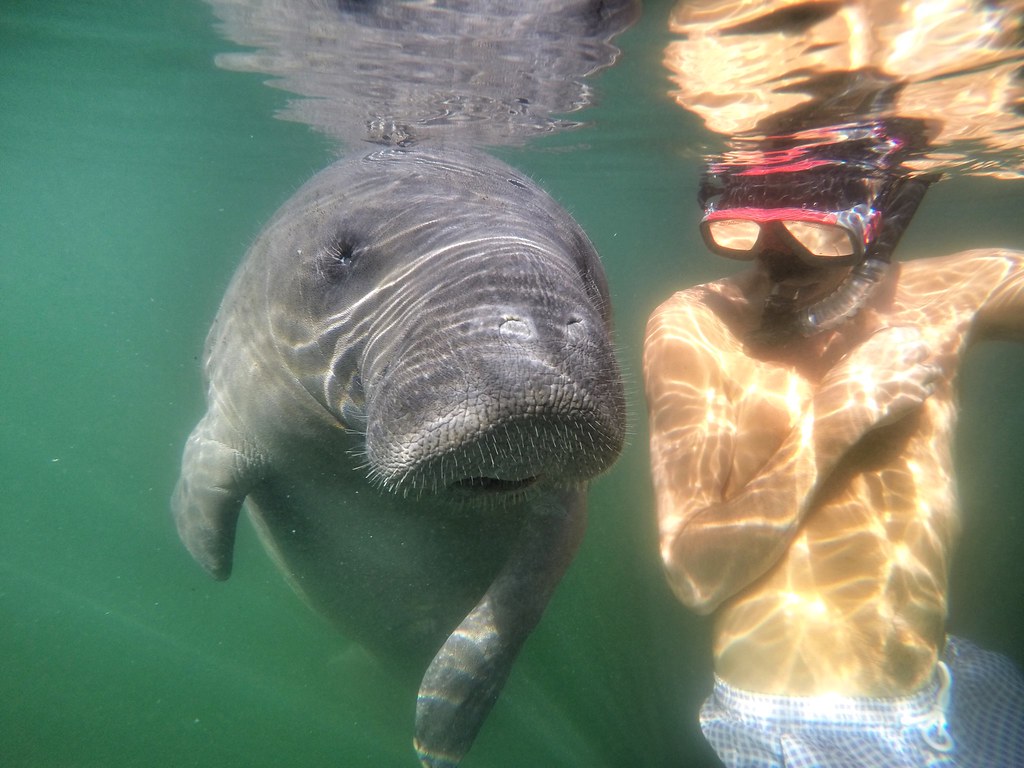 After getting a wonderful experience with the manatees we decided to continue paddling and ventured through the man made canals and took a different bridge out onto the main bay. This bridge probably wasn’t meant for watercraft of any sort as it only had a 1 to 2ft space between the water and bridge. I had to crouch right down and Craig laid down on the board. We both cheered when we made it through successfully. 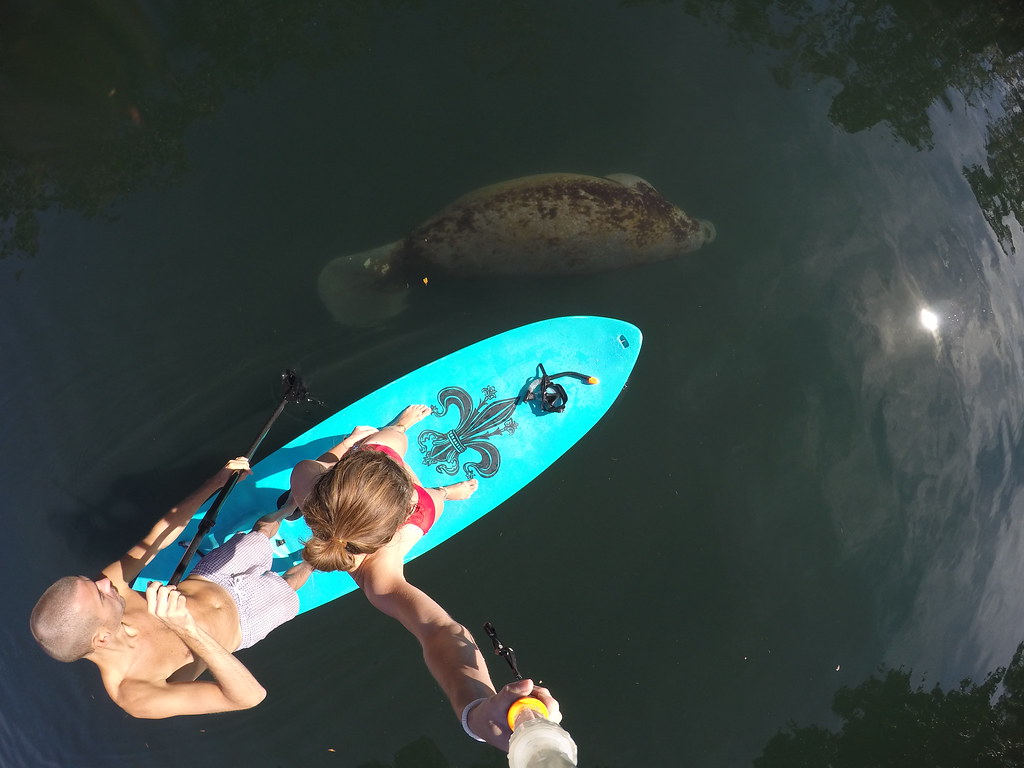 The winds had picked up a bit so paddling became a little tougher and I looked at my map to see how far away an island was that I planned on visiting. It was hard to suss out where it was and even if we made it there we knew it would be a struggle to get back in time to return the board. We’d already passed a couple of springs marked on my map and they weren’t anything so we didn’t want to paddle all that way and have the same situation. So we opted to go back and hang out with the manatees some more. We passed the original couple on kayakers that we’d seen earlier and they asked if we’d managed to see any, so we said we’d had a great time and seen over 10 manatees. They were shocked at how many we’d seen and then we saw one go under their kayak, “there’s one right there, going under your kayak now…just to your right now”. Then we realised that they could barely see it from sitting so low in the kayak. So a little tip for anyone going to see manatees – rent a stand up paddle board, the views from standing up are incredible, kayaks are far too low down…and even if the water is creepy as hell, it’s worth snorkelling in to be hugged by one of these gentle giant. 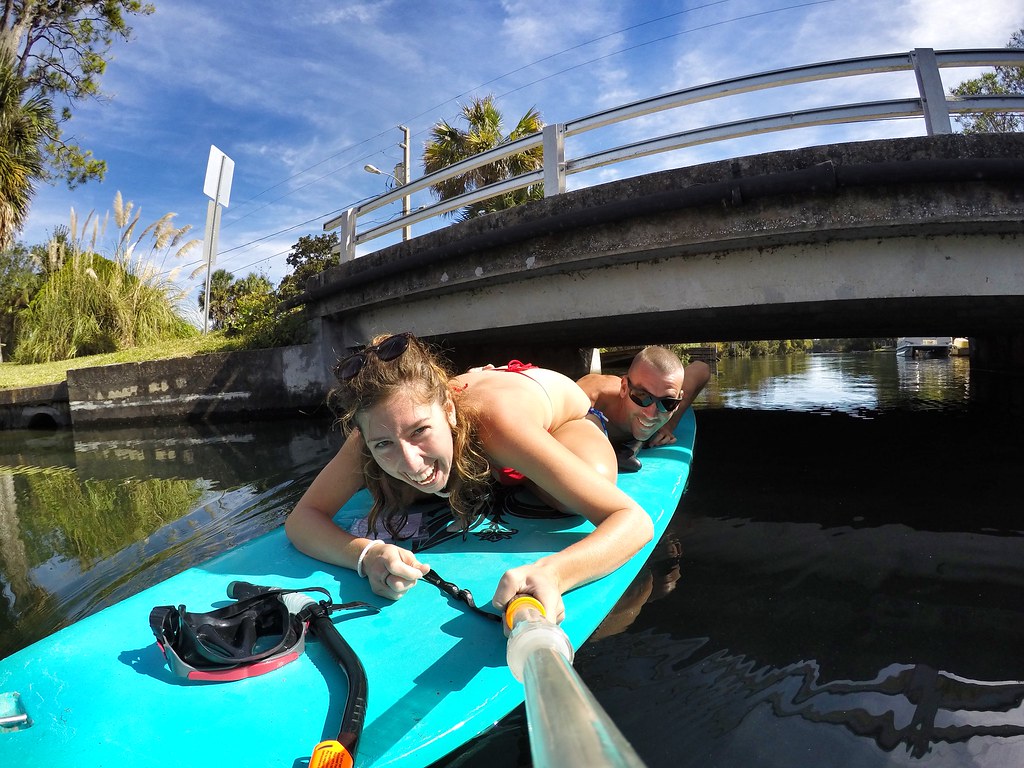 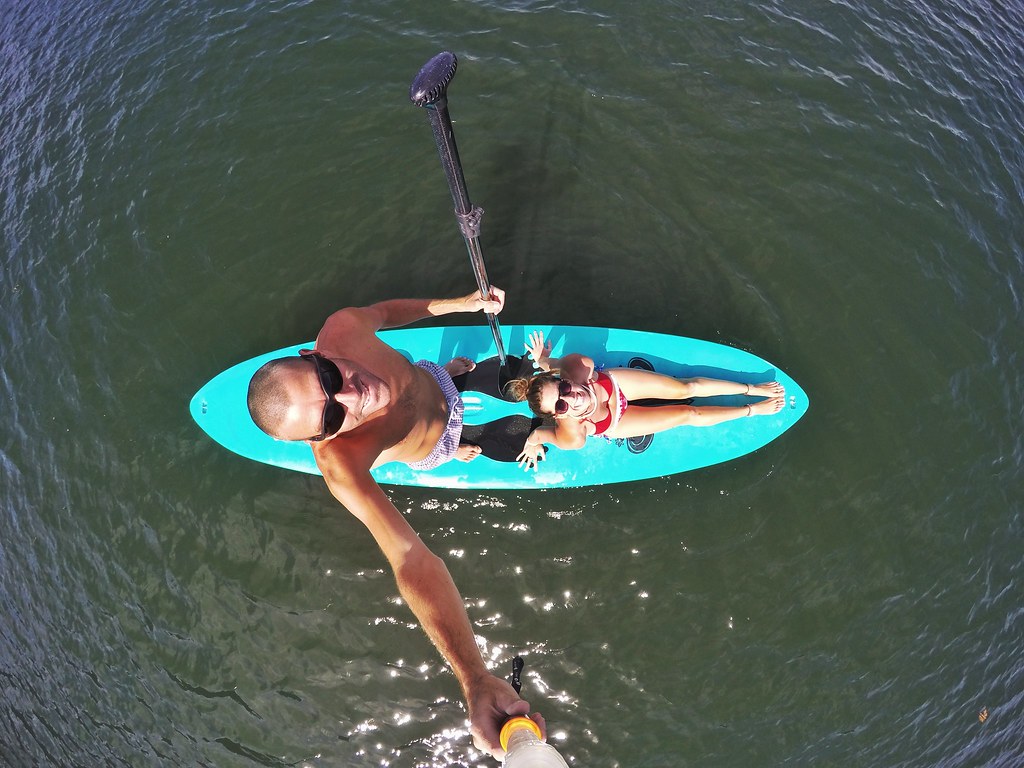