After our first Floridian Spring we were hooked and excited to explore some more. Browsing over our map we could see northern Florida was full of them, but which one to go to next? We ended up picking Fanning Springs State Park. Steps led us down to the spring with glimpses of the clear blue water through tropical foliage. It was a lot bigger than the previous spring we visited but it lacked the natural appeal thanks to some ugly concrete platforms around the edges. The good news however was that we had the whole place to ourselves, and the concrete platforms gave us a fun jumping platform and sunbathing station so it wasn’t so bad after all. The spring branched off from the brown Suwannee river and in winter manatees will swim up the river to enter springs like this one which remain a pleasant temperature for them. 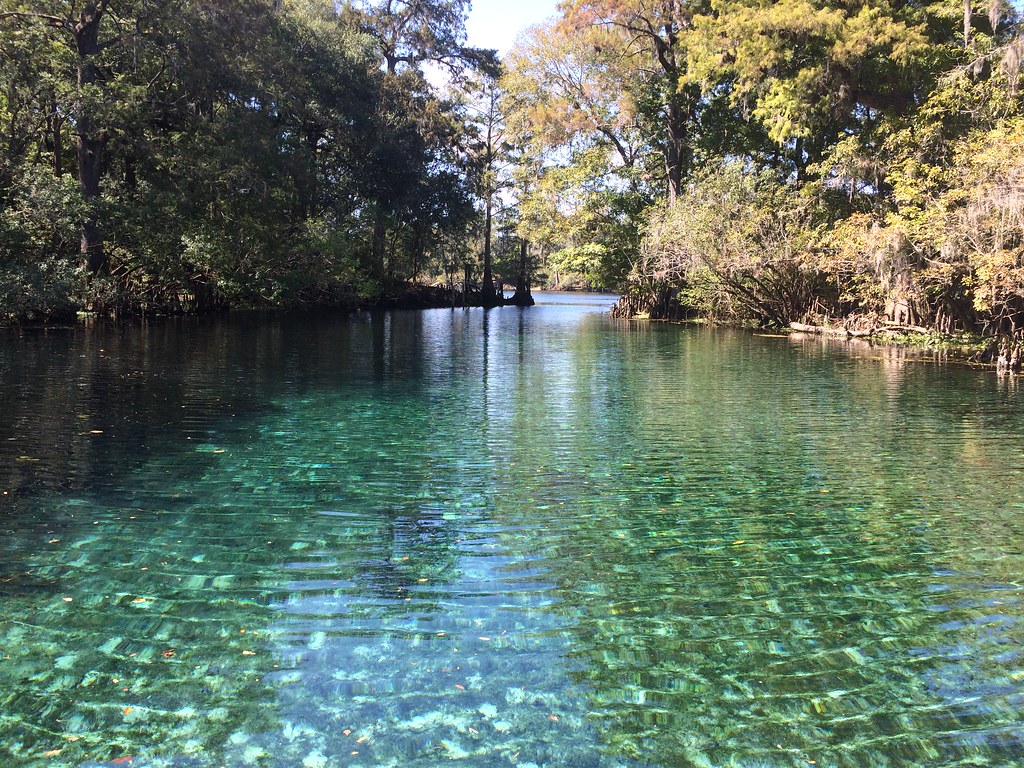 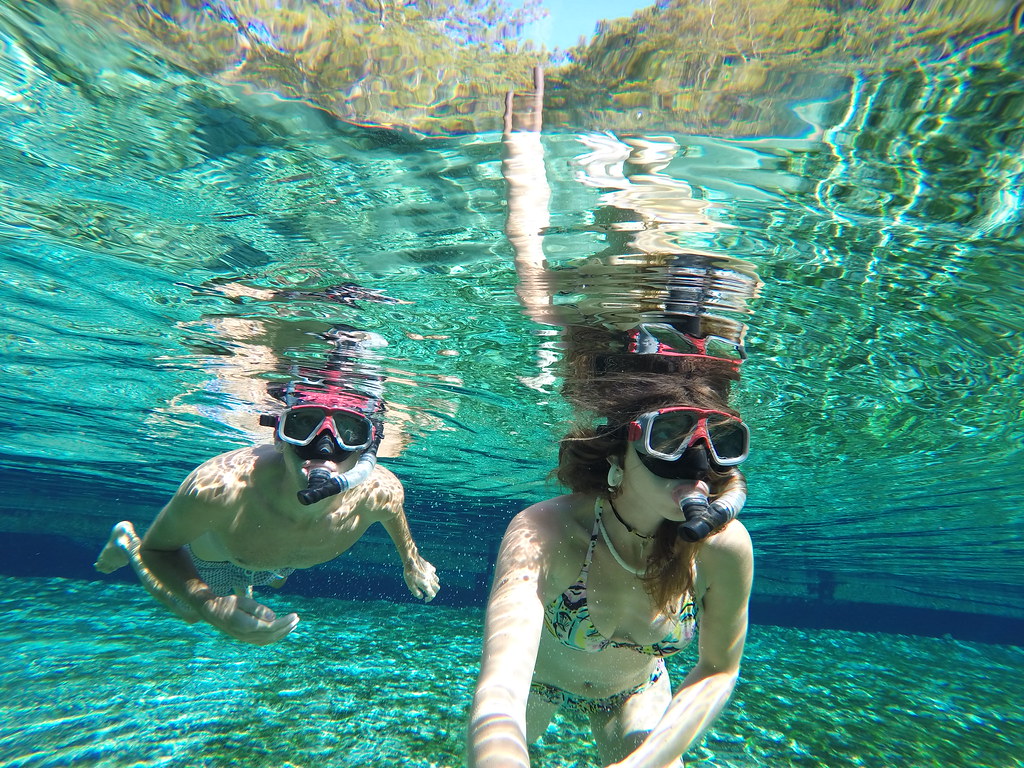 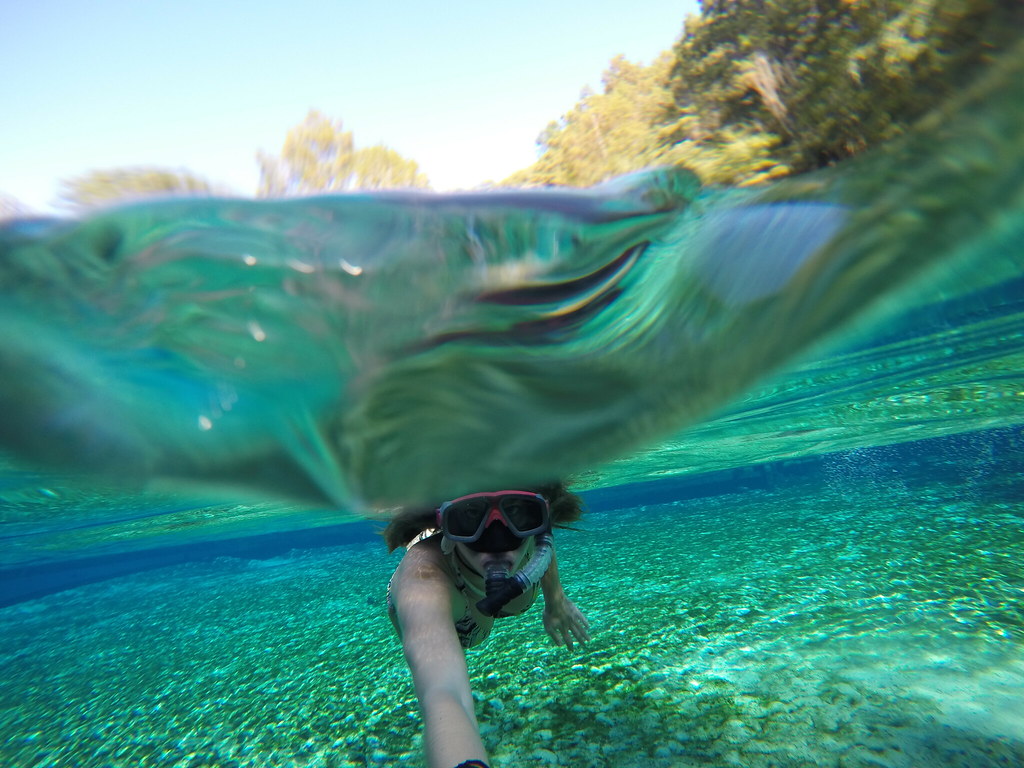 The ground was sandy with patches of algae and mostly at a depth where we could stand and then it deepened at the far end into a big hole. The visibility was once again phenomenal, and just like swimming in pure gin. Turtles swam past us very casually and slowly until we moved and they’d dart off at lightning speed. We spent the whole day at the springs basking in the sun and jumping in the pool like big kids. We continued to have the pool to ourselves for most of the time too which was delightful. While having lunch brightly coloured birds flew in the trees above us and the area felt so tropical and un-American, but in a good way. 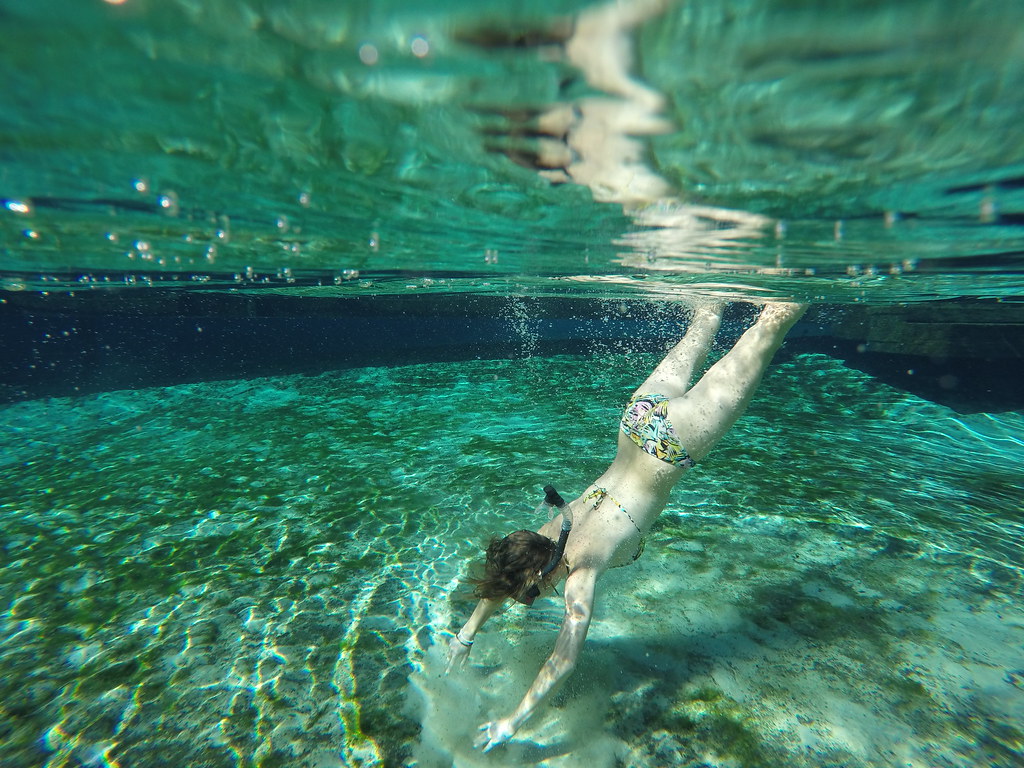 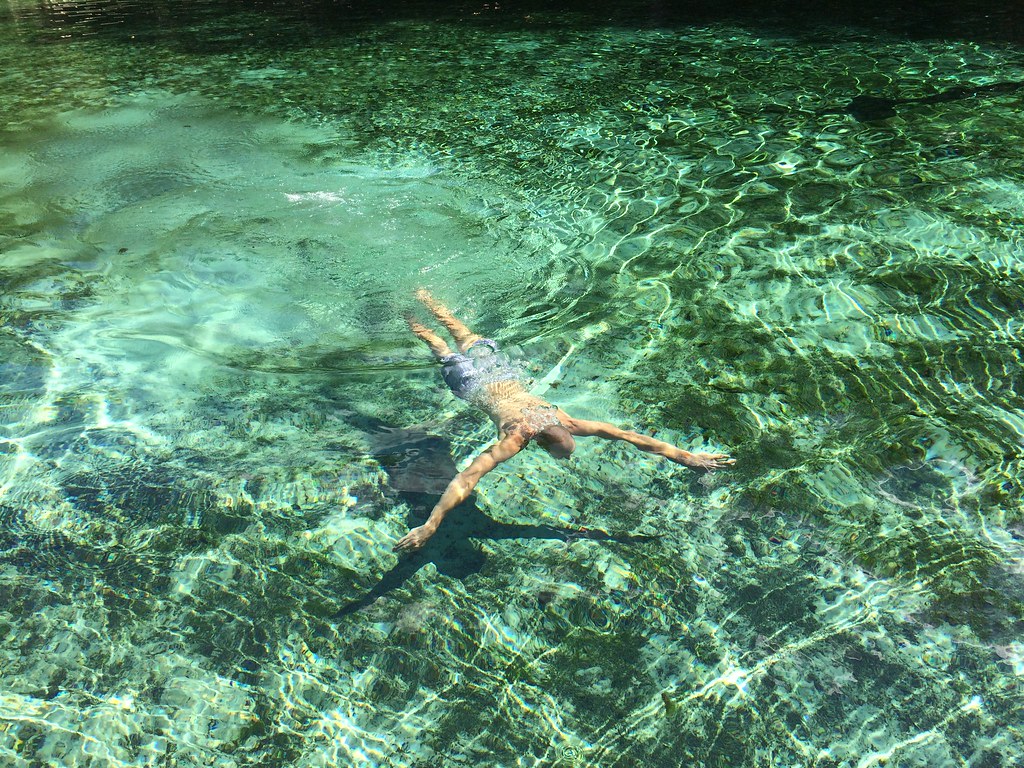 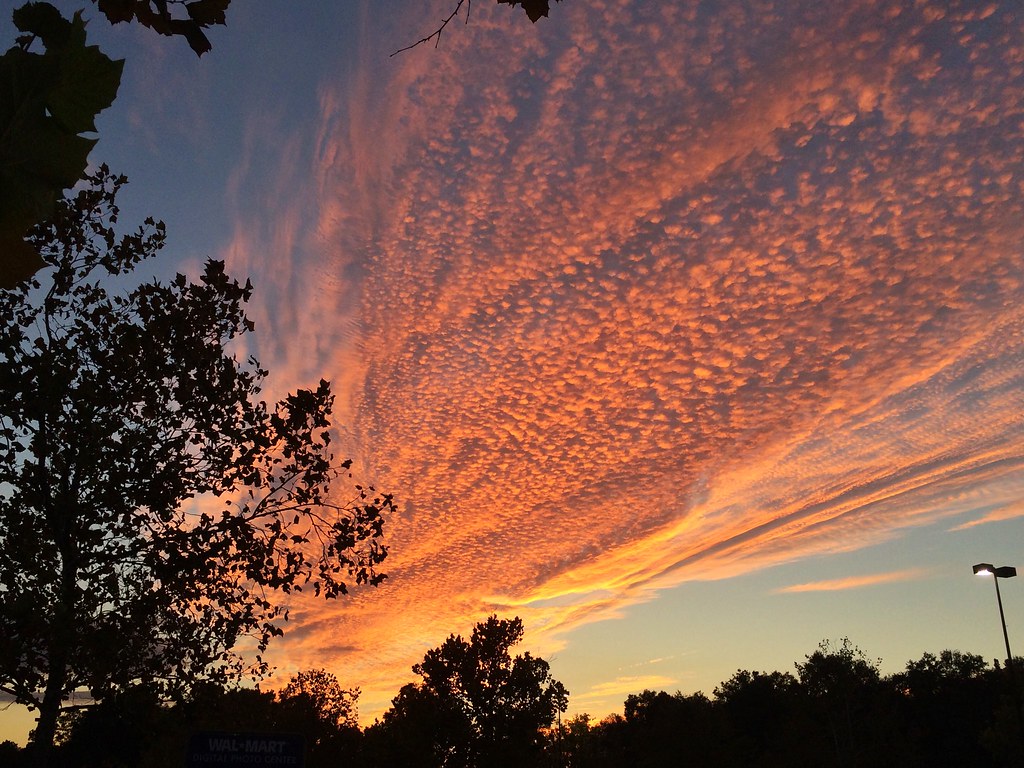 The next day we headed into Ocala National Forest which had a fair few springs but we were surprised to see they cost more than the state parks to visit which sucked. So we picked one and that was Silver Glen Springs. The entry fee to this spring included a couple of nature trails so we took a walk first. The scenery was really interesting on the trail with huge trees covered in dangly moss, like it was all decorated for Halloween. We only passed one couple and they warned us of a large snake on the trail who was acting aggressively so we kept an eye out but never saw him. Believe it or not but Florida is home to black bears, something we hadn’t expected to see this far south. The Ocala forest is home to over 1000 according to an article I read and we saw our first bit of evidence right next to a bench on the shores of Lake George. It was a huge bear skat and as we looked up at the second largest lake in Florida Craig said “there’s an alligator!” I didn’t believe him, we haven’t seen one yet and he was suggesting that a tree branch looking item was one. We zoomed our camera in and it was a bloody gator! How bizarre to see bear skat right by our feet and an alligator just 5 meters away. We continued walking along the lake shore until we got fed up with walking into cobwebs. The final web had a spiky shelled spider full of bright colours just holding onto a dangly string of web across the trail…our sign to head back. 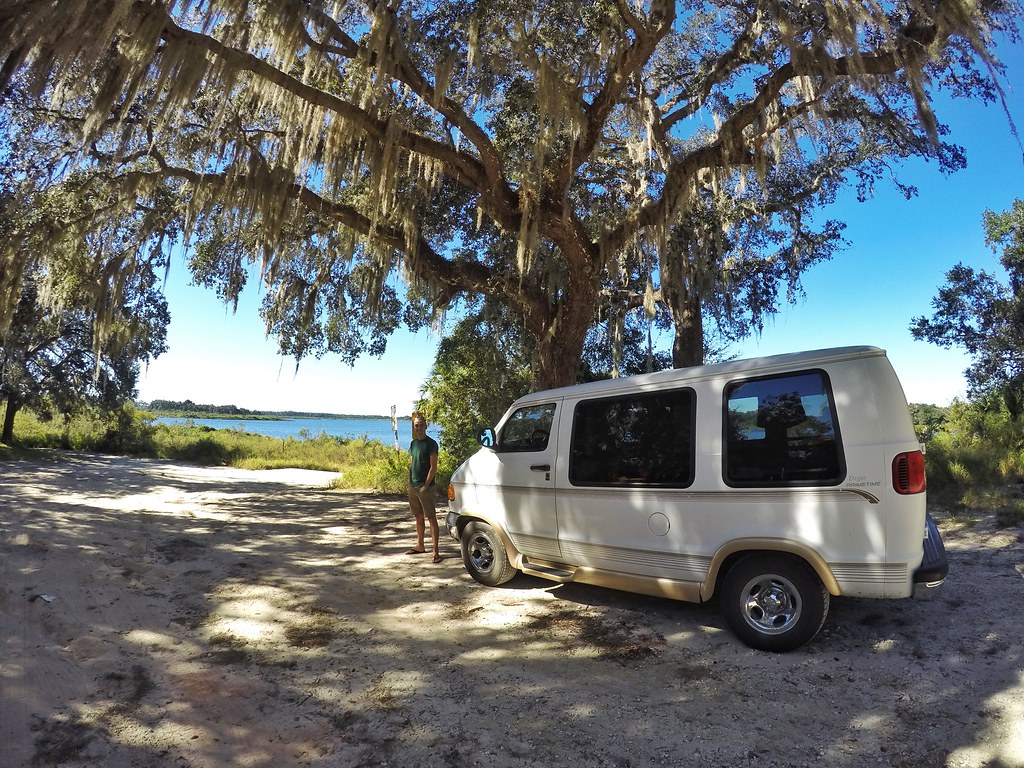 Now that we’d worked up a sweat we headed back to have a swim in the spring. Silver Glen branches off from Lake George, you know, that lake we just saw an alligator in!! But that was quickly forgotten about when we saw how idyllic the pool was. The water was a bright aqua colour and we plunged straight in with our snorkels on. As it was a Saturday we actually had to share our spring with other people which was an odd concept. The water was so clear and visibility so good that it was hard to take a photo without someone visible in the distance. There was a great big hole again and the cool thing about this spring was that it flowed right into Lake George so any fish in the lake could come into the spring. We were shocked at the size of the fish, chunky 2ft long ones were grabbing chunks of algae from the ground. Tropical palm trees lined the edge of the pool and Craig tried to unsuccessfully climb one which was just humorous with all his snorkel gear on. 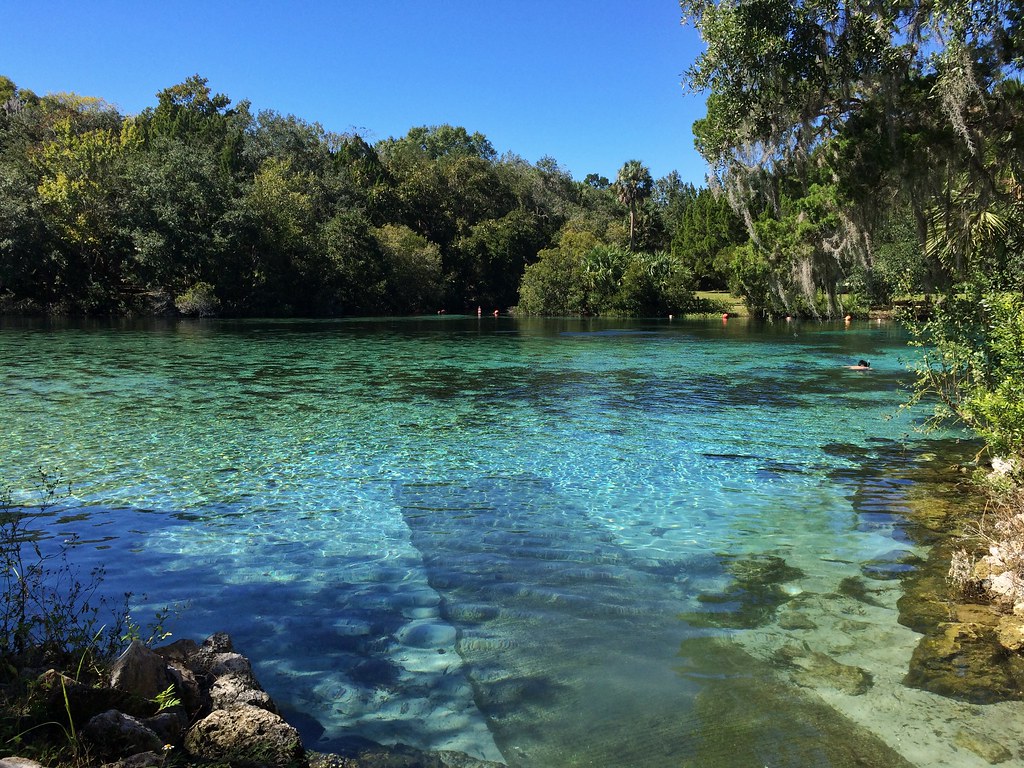 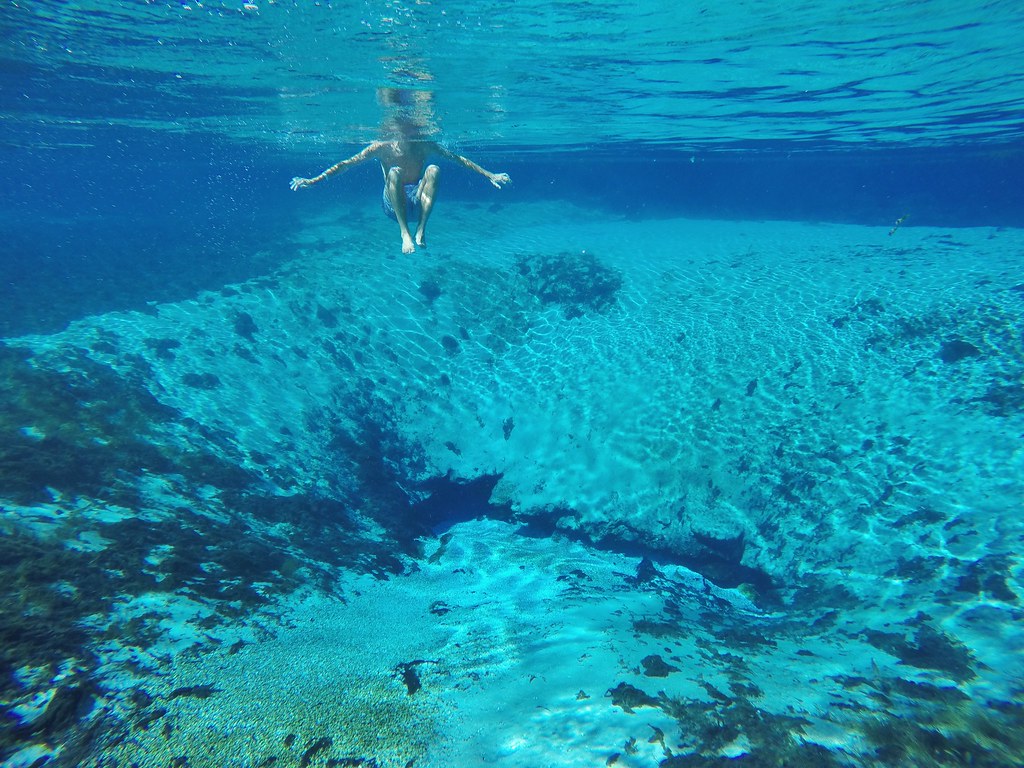 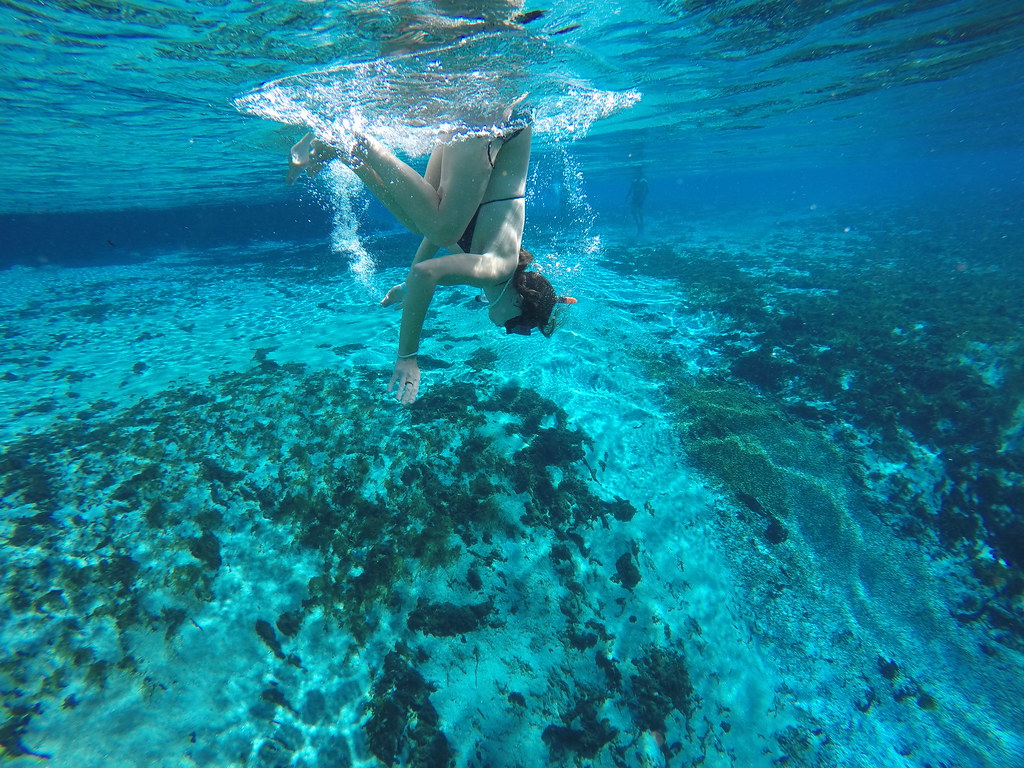 After a warm up in the sun we went back in the water and Craig started swimming left into the lake and away from the spring. I was struggling to keep up with him and the visibility quickly deteriorated. It was still fine, but with every foot we swam away from the spring the visibility became worse and I didn’t like it one bit. So I made some irritating noises through my snorkel to get Craigs attention and said we should go back as I felt scared, we’d just seen an alligator in the lake and now Craig was bloody plowing off into the unknown. He wanted to go and see some goddam fish in the distance so I made a big fuss saying why would you go into a murky lake when we have a stunning spring etc and we were having to tread water while arguing and I looked down to see brown everywhere and let out a squeal. No I hadn’t shat myself, I’d disturbed all the algae and it was creepy as hell so I swam back as fast as my doggy paddle technique could take me and then Craig came back and just left the spring. So that was a fun final swim. I did find a group of over 30 big fish on my own which I gloated to Craig about afterwards…”there were fish everywhere!! All in the clear spring water!”. 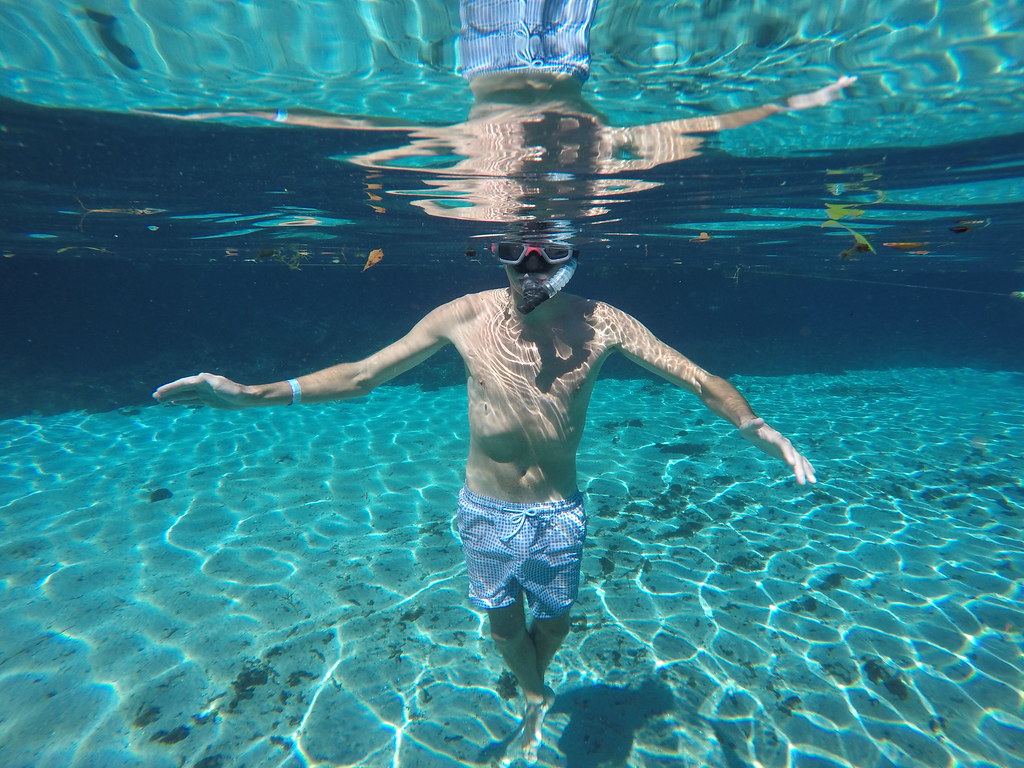 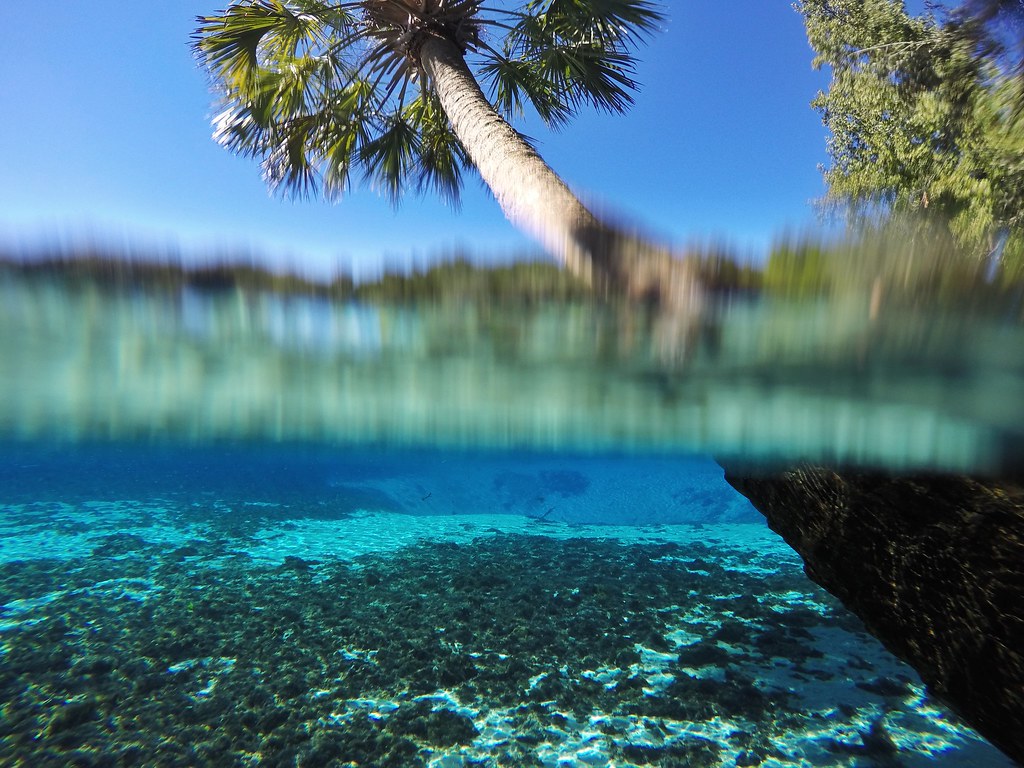 We got over our argument and found a free camping spot up one of the parks many wild sand roads. We parked near a cross junction which was covered in little bear prints. The next morning we took some more sand roads – only the best quality ones mind you as some were seriously rough with deep sand tracks. One road was lined with a bears prints that had clearly walked all the way down the road. We found some lovely lakeside places to free camp, much nicer than where we stayed last night but you just never know what’s going to come up. If we end up coming back north we now know some great places to stay and we’d be sharing our space with the elusive bears who remained hidden amongst the palm trees and moss covered bushes for our entire visit. 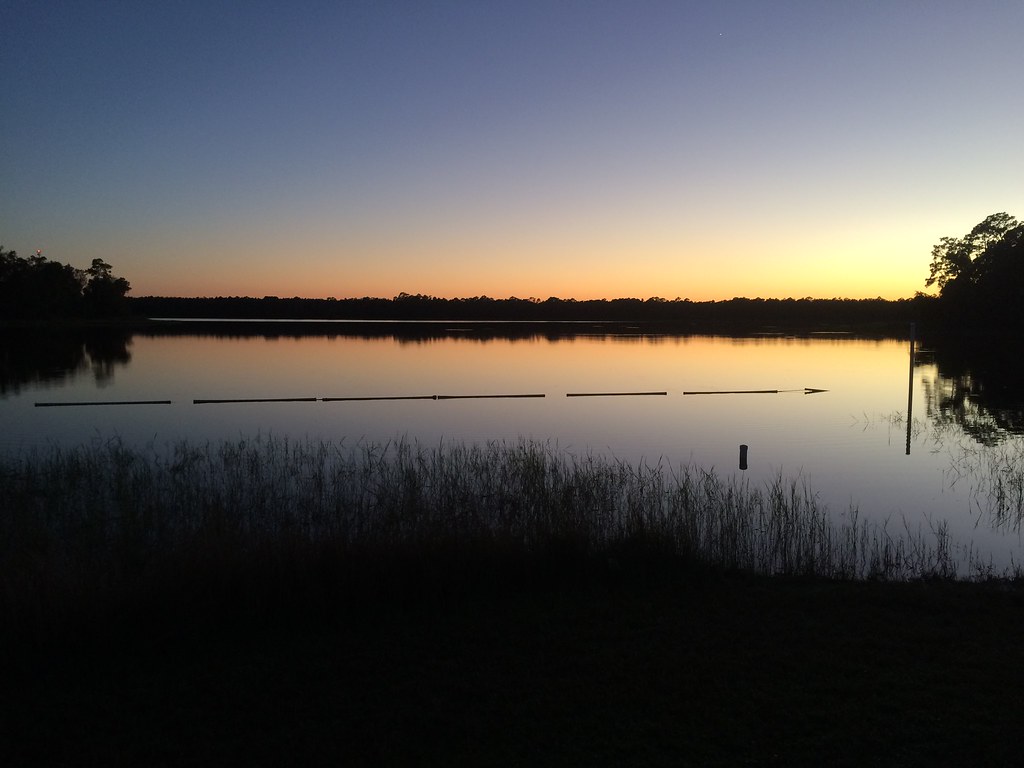 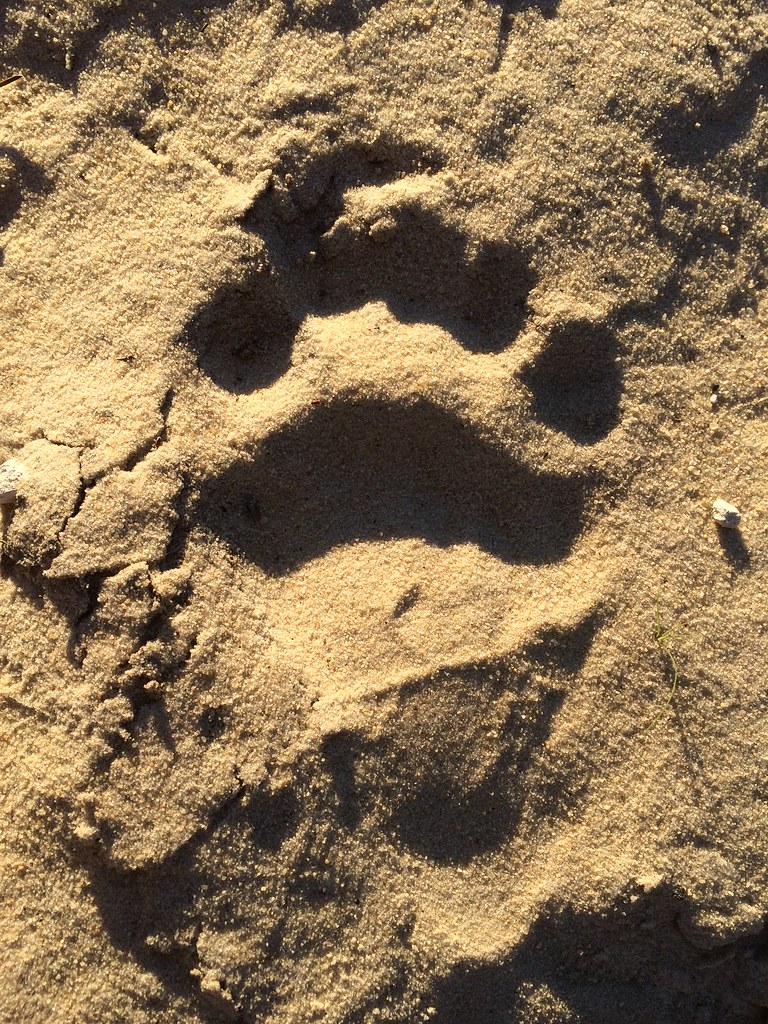 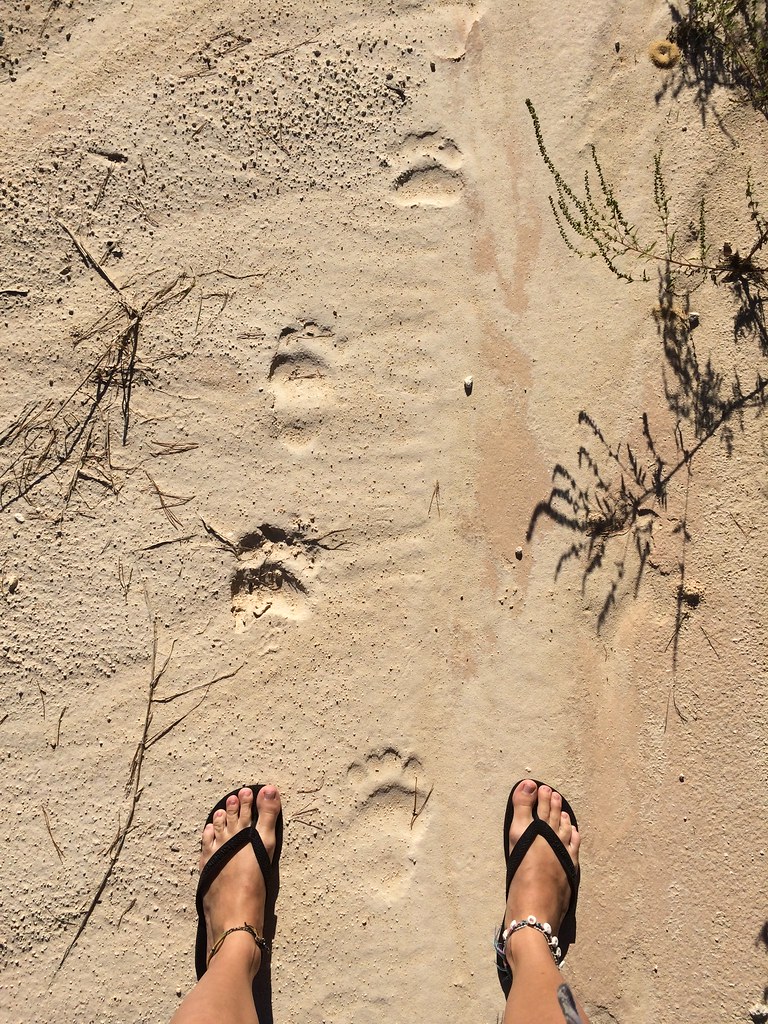 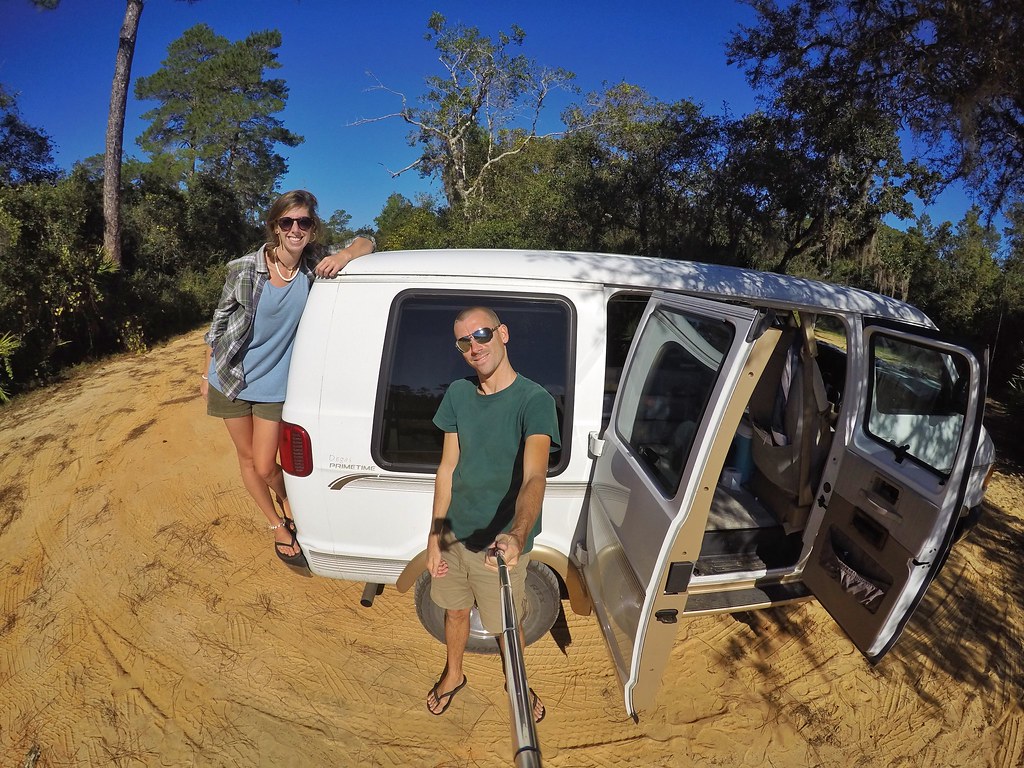