After six months on this incredible roadtrip we finally crossed the border into our final state, Florida. We were over the moon that good old Daphne had taken us roughly 13,000 miles through some of the worlds most impressive scenery. It didn’t quite feel like we’d crossed the finish line yet though as we still have three weeks to explore the sunshine state so there will be more celebrations once we reach the end of the road at Key West. 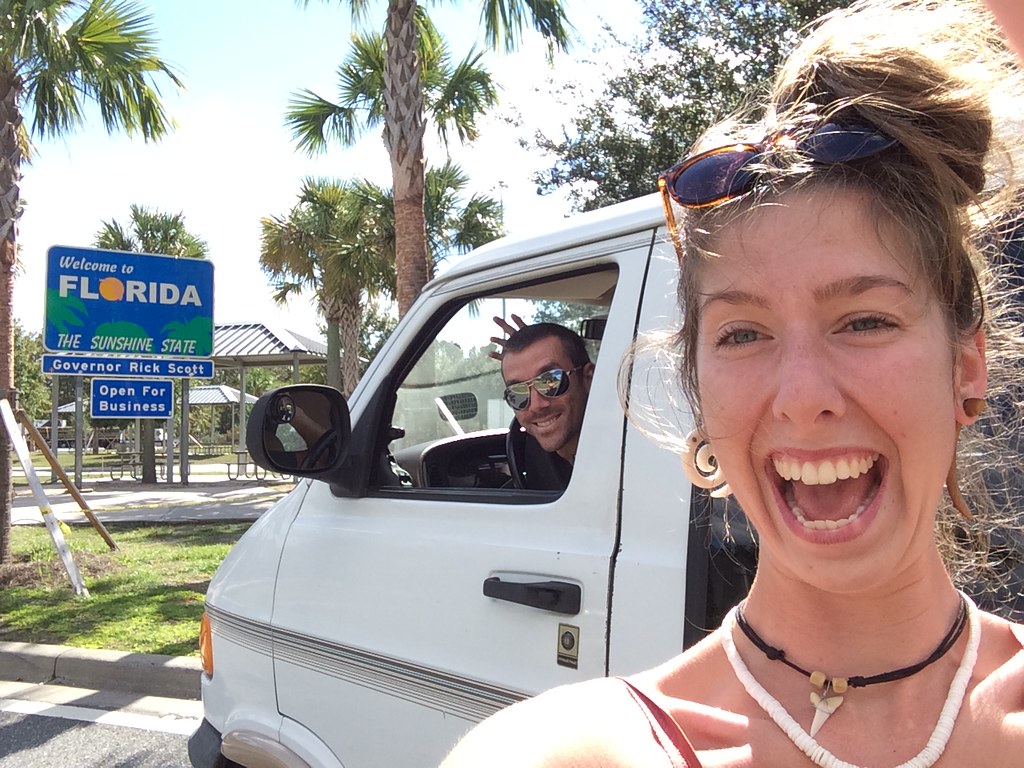 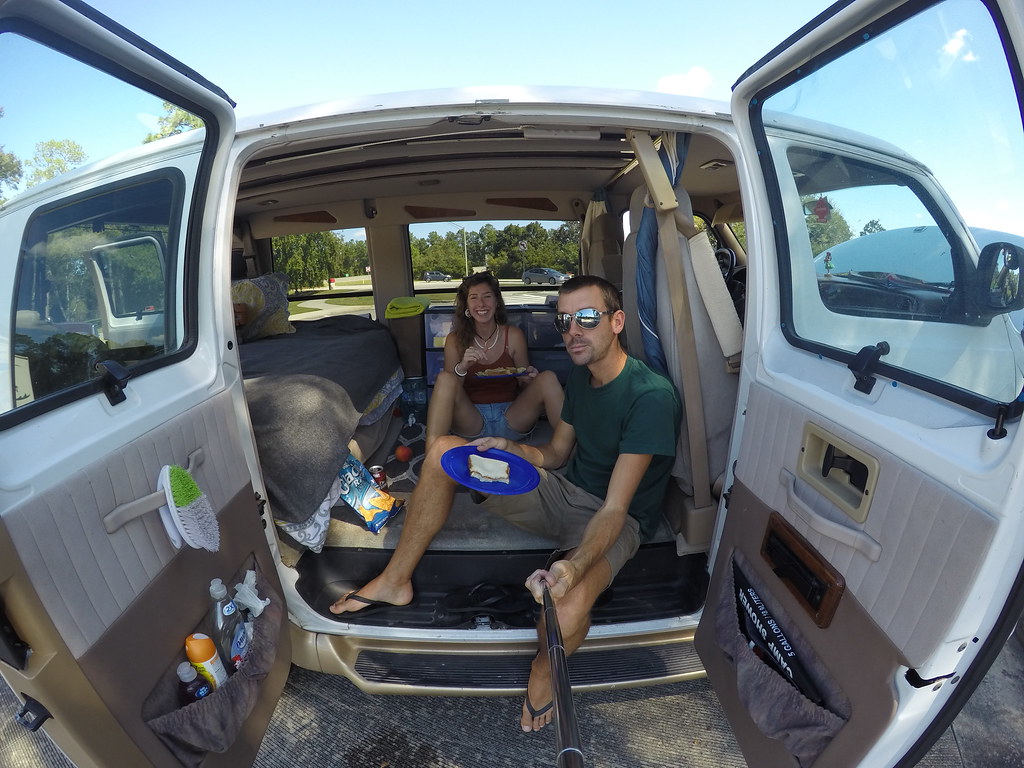 We arrived at the welcome centre to find our solar shower had leaked about 10 bloody gallons on the floor so instead of doing an exciting ‘WE MADE IT’ video we spent ten minutes moping up the water with towels. At least the weather was stinking hot so it would dry quickly, but we were gutted that we only had half the amount of water we needed for a shower…unlucky Craig.

We were really disappointed by the lack of knowledge and information provided at the centre. The lady had pathetic answers for anything I asked “what’s the deal with alligators in Florida, are they all over? will there be a sign warning us?” “Could be”. Not the best welcome so I grabbed a bunch of brochures to try and work out where to visit. Luckily the place redeemed itself by having free freshly squeezed orange juice which we cleverly, or cheekily, call it what you like, got multiple re-fills every time a new staff member took over the machine.

On our first full day in Florida we headed to Ichetucknee Springs State Park. The road leading to the park was wonderfully peaceful and had warning signs for turtles crossing. We paid our entrance fee and arrived in an empty carpark with the intense sound of crickets. Jungle-like forest surrounded us and we couldn’t believe how quickly the scenery had changed to this tropical paradise. There were two short trails to springs and a warning sign at the start saying alligators live throughout the park and can be on trails and in waterways – slightly disconcerting! The first spring we visited was Blue Hole which was a circular spring with crystal clear water, however it was all in the shade so actually looked dark and creepy. When the sun poked out we could see the ground of the spring was covered in bright green grass swaying in the current. The centre of the spring had a visible dark area where it dropped down into a hole and is the entry point for scuba divers who explore the labyrinth of waterways under the ground. We gave this spring a miss and instead walked to Ichetucknee Spring which was very inviting. The sun was beaming down now and the water was a wonderful blue colour. We’d brought our snorkels along and I jumped in and couldn’t believe the sight below the surface; it was the clearest water I’d ever seen. There were fish swimming around, swaying grasses, rocks, sand, and a big hole where the spring water flows up from. If I didn’t have a snorkel in my mouth my jaw would be wide open in awe at the incredible sight. We ventured to the far end and saw a few turtles with bright yellow bellies swimming around. The water became fairly chilly after a while so we headed off to explore the southern area of the park. 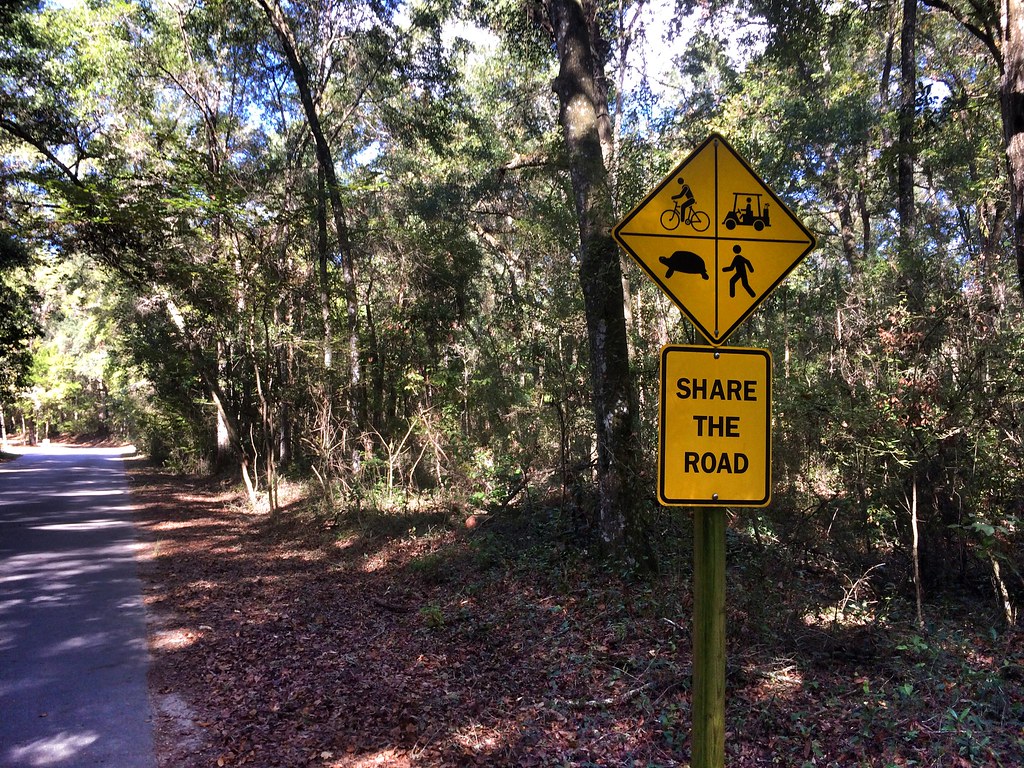 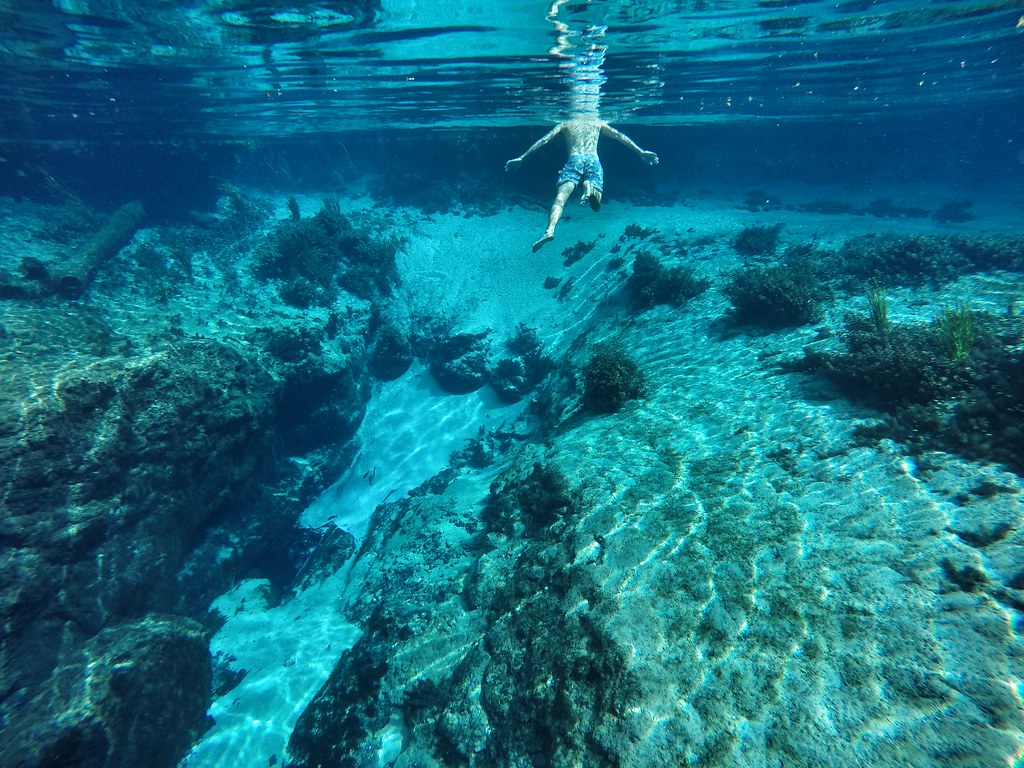 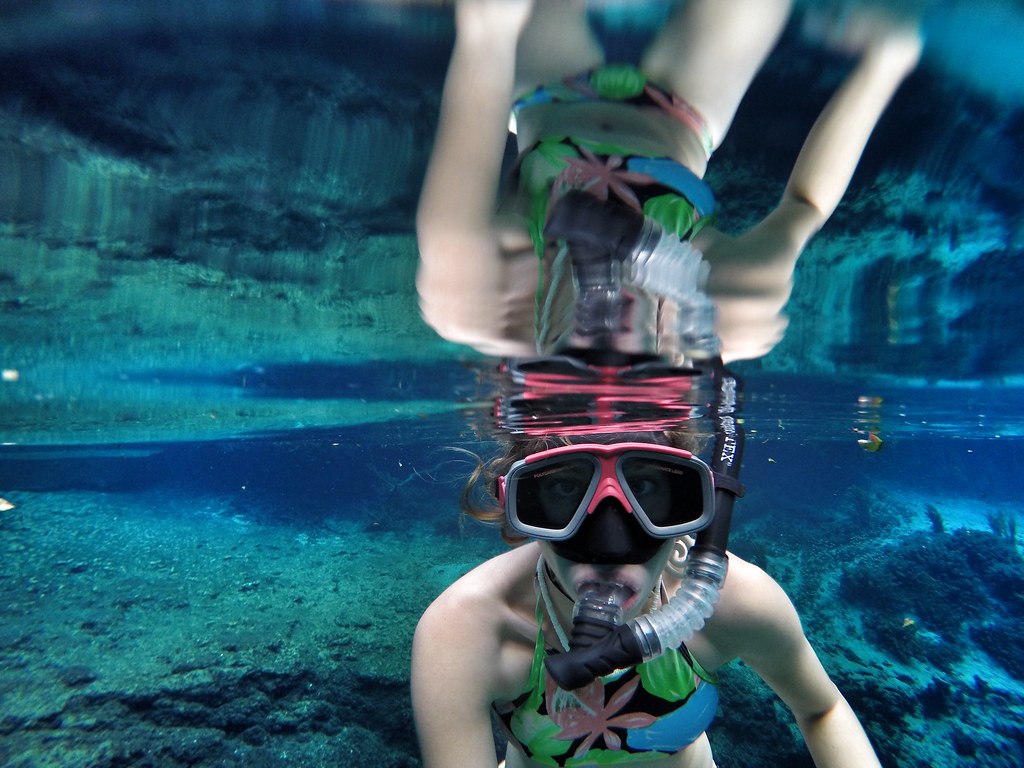 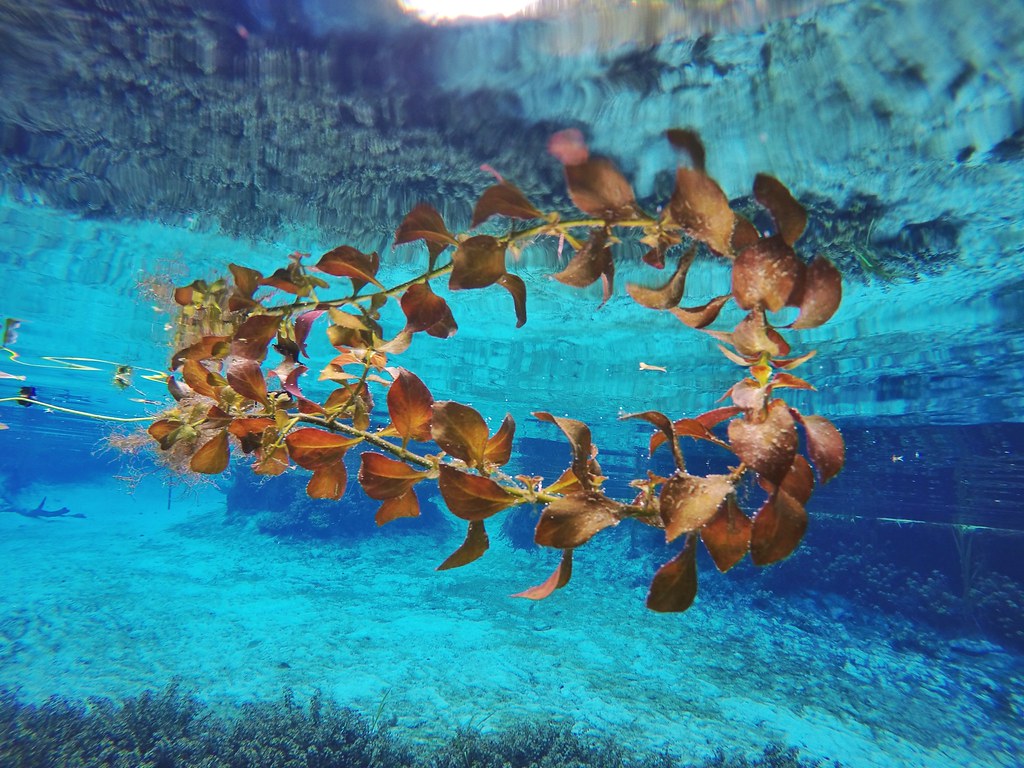 The Ichetucknee River is a spring fed river which is very popular to tube down so we pumped up Roland the rowboat for the first time in about a month. The last time we used her the bottom section had a leak so it was good to see that the patch we used had fixed that issue – however as Craig pumped it up a seam on section two opened! Nooo! We sealed it up and tried again, then section three split on a seam!! What a disaster! We didn’t want to give up so we patched that one up too and took our rubber tube along as a life vessel – one person could at least tube in that to take some pressure off Roland. It was just under a mile walk to reach the river access and half way along we heard a ‘pffft’ noise and one of the patches had undone. Geez – you’d expect a dollar store puncture kit to solve an issue like this. We had nothing on us to fix it…except for chewing gum. I felt like a genius when I suggested it. We stuck the gum over the edge of the patch and made it to the river successfully. Nothing quite like having a boat that may sink and another warning sign for alligators! 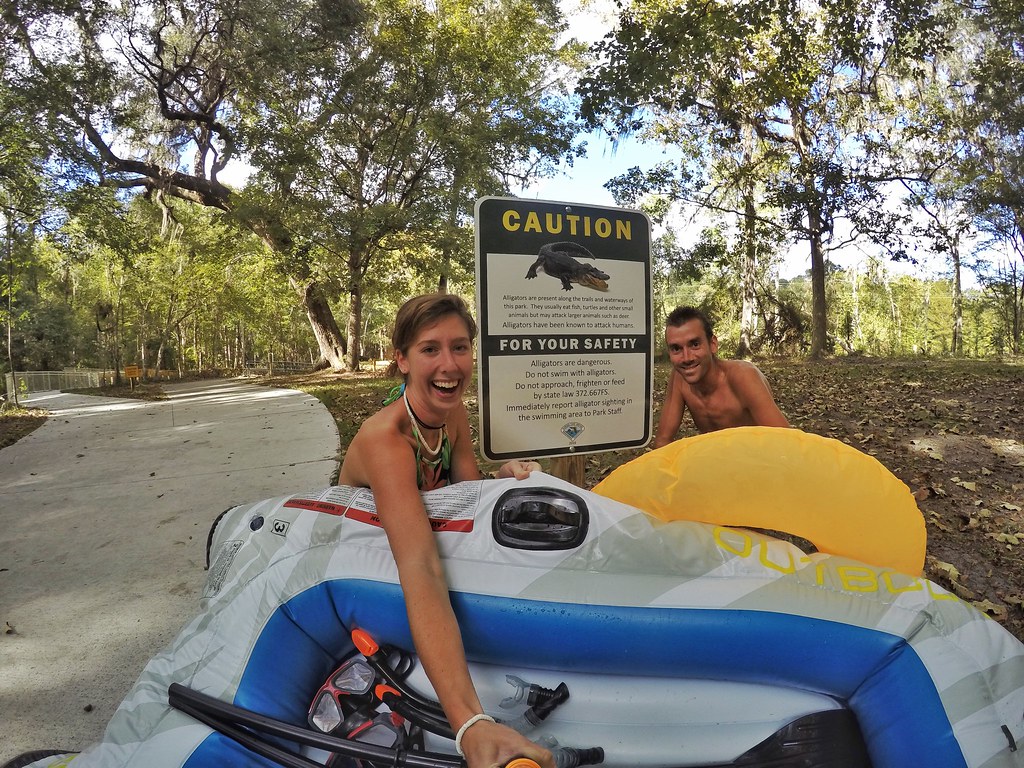 I went into the cool water in the tube while Craig took charge of Roland. The river was crystal clear and surrounded by dense rainforest. Turtles were piled up on tree branches that rose out of the water and elegant herons pecked for food along the shores. The chewing gum was letting out a little air so Craig laid down and had his feet on the patch to keep it sealed. It was all going well until he moved his foot and realised the chewing gum had stuck onto him and we heard the loud ‘pffft’ sound once again! The chewing gum had lost its stickiness and poor Craig had to re-chew it and plug up the leak again. It wasn’t exactly the most relaxing drift down the river but it was very tranquil and scenic. We passed one ramp where we could exit but decided that we’d persevere but swap roles, I’d go in Roland and Craig in the tube. Some kayakers at the dock must of been laughing at the sight of us going down the river in a very saggy looking boat. We did make it to the end of the river successfully but it was Roland’s final trip – her punctures were too severe. RIP Roland, you’ve taken us along some incredible water ways. 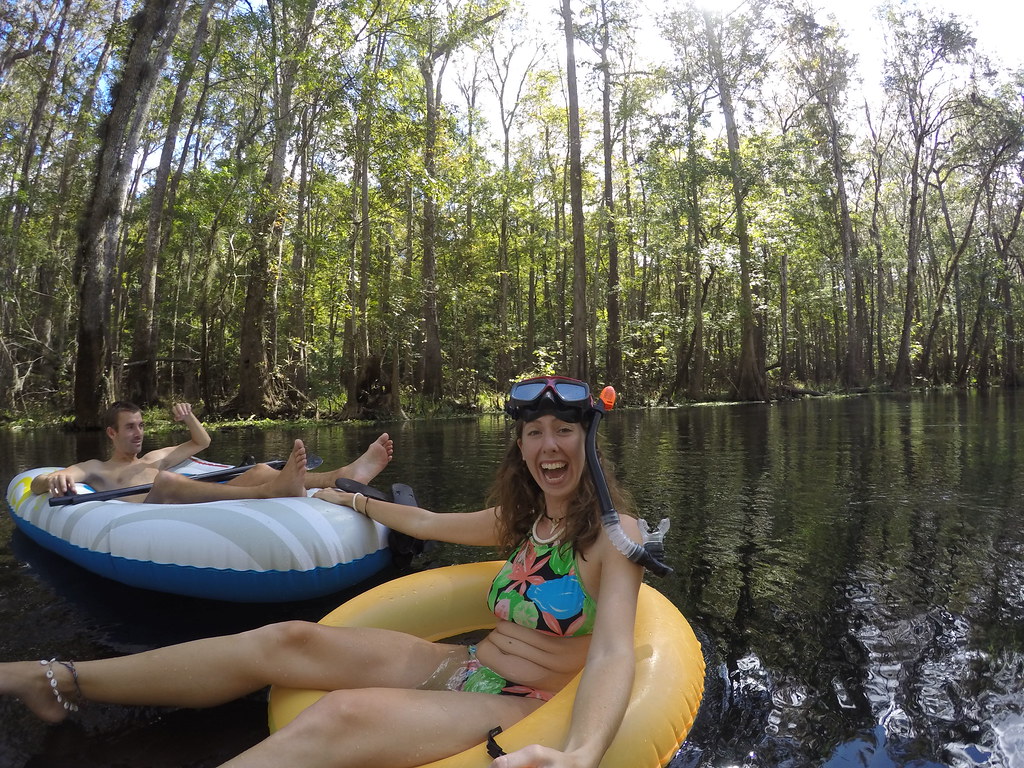 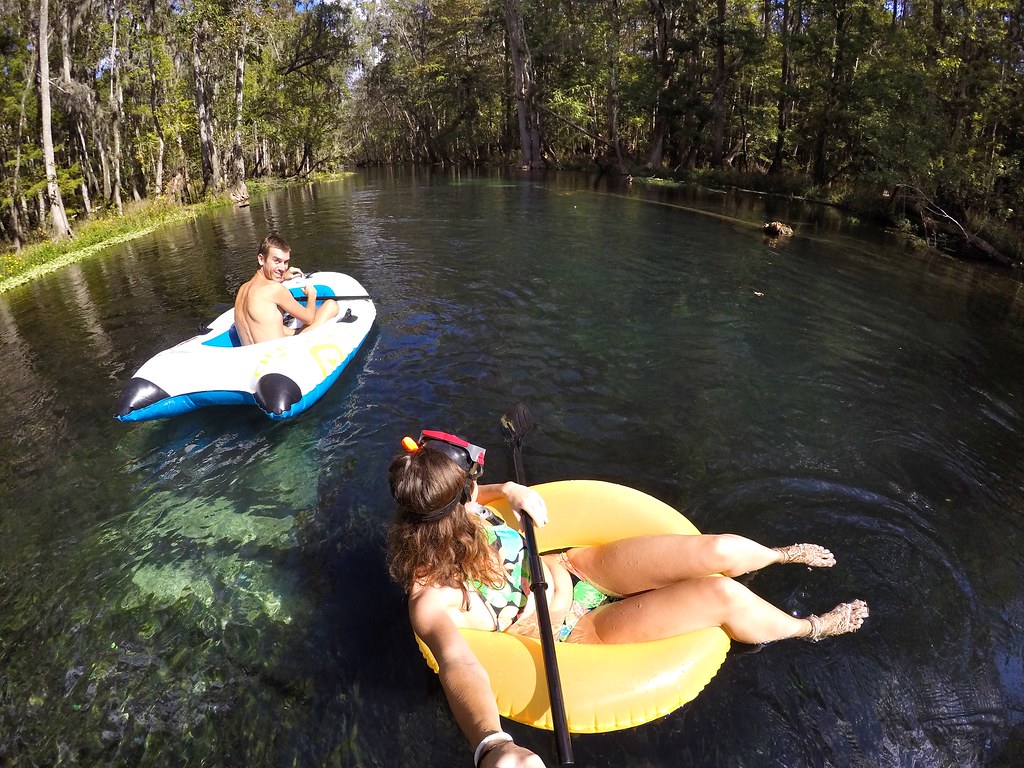 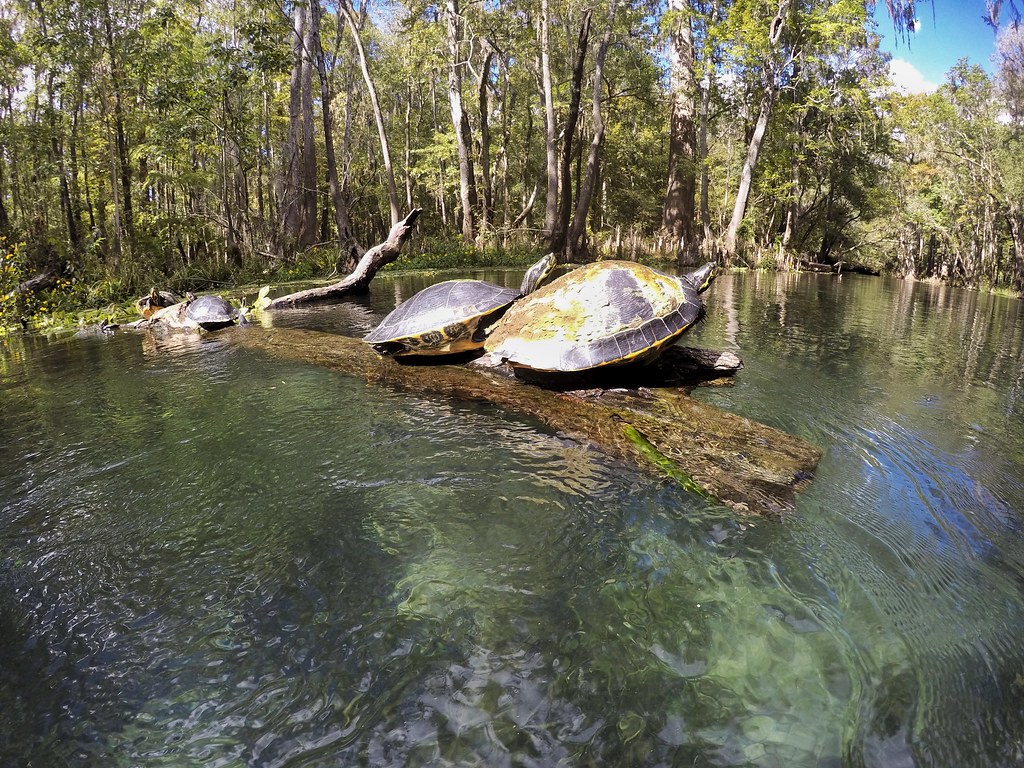 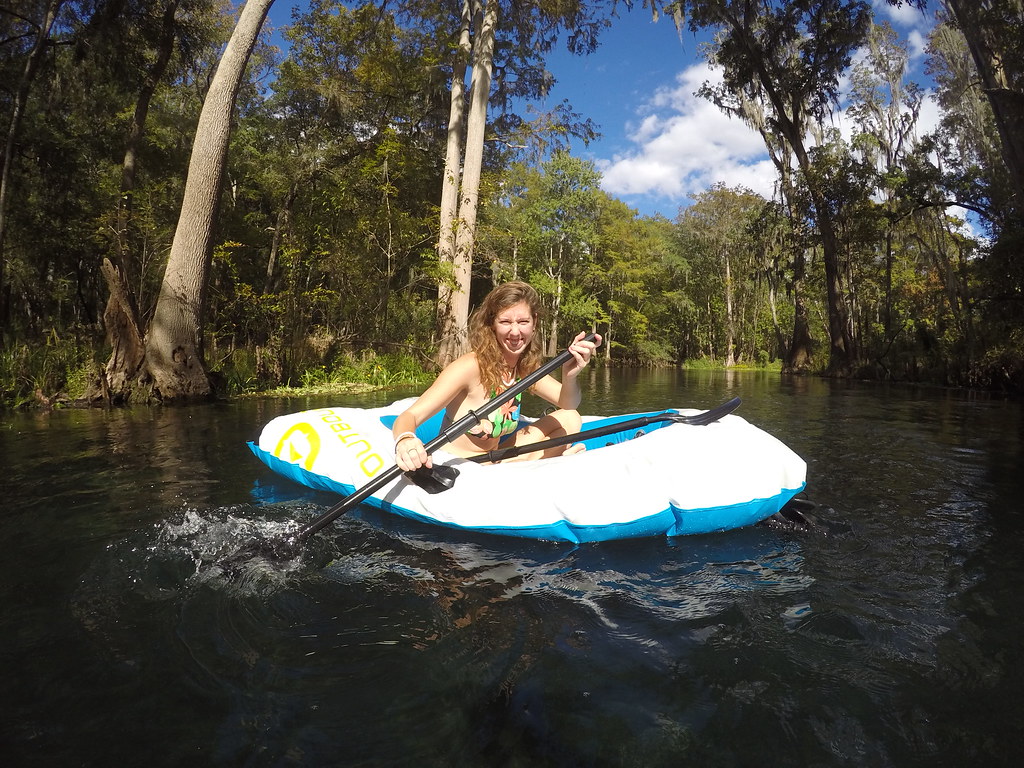 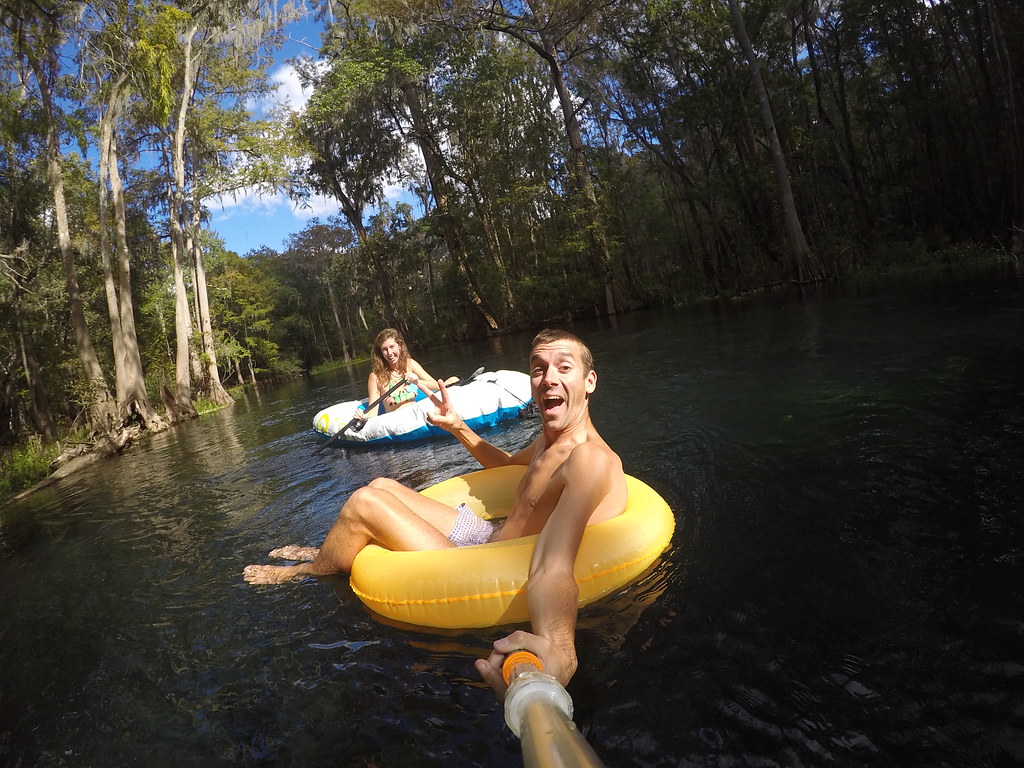