To reach the Great Smoky Mountains we left the Blue Ridge Parkway and veered into Tennessee. There were a few entry points into the National Park this way and and it would also give us a very small taste of the ‘soundtrack of America’ state.

As we reached the small village of Cosby big signs said a festival was happening so we pulled up to check it out. There were lots of stalls selling homemade goods from clothing and bird boxes to freshly ground cornmeal and local delicacies. A live Appalachian music band were having a great jam with banjos, dobro’s and strong southern accents. We grabbed some homemade peach cobbler and wondered around a small stage where I was delighted to find a beauty pageant, for kids! We only see these on tv in England and it’s usually documentaries slating the parents for making their kids dress so grown up, so it was interesting to see it in person. The group we were watching were 3-4 year olds and each one very different from the other. Some girls had simple hairstyles which were just neatly done up while others had buckets of hairspray and elaborate curls like a lady in the Middle Ages attending a grand ball. Some had heavy make up with thick foundation while others were natural. Each girl was led up onto the stage with her mum and introduced to the crowd…”Here we have Lucy, she has blonde hair and blue eyes, her favourite tv show is pepper pig, her favourite food is pizza and her hobbies are riding on her dads tractor and milking the cows” one girls favourite hobby was making fairy gardens! Family members tried to encourage the girls to smile and wave at the judges. I’d say most of the kids looked happy to be on the stage, a little confused about what they were doing but happy to fake smile for the 25 cents that their aunty was holding out in the crowd. There was one little girl who really didn’t want to go onto the stage though and was not a happy bunny. She began to cry and was trying to hide behind her mum. She didn’t want to be there, so the mum stormed her off stage in a huff and I felt so sorry for that little girl. 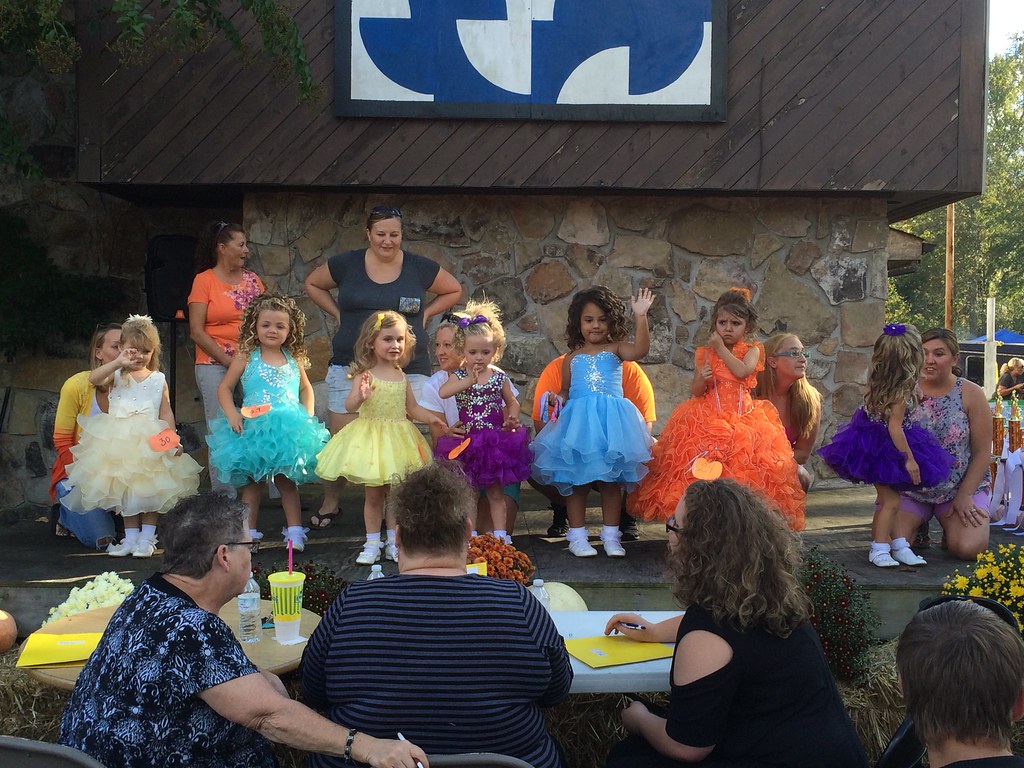 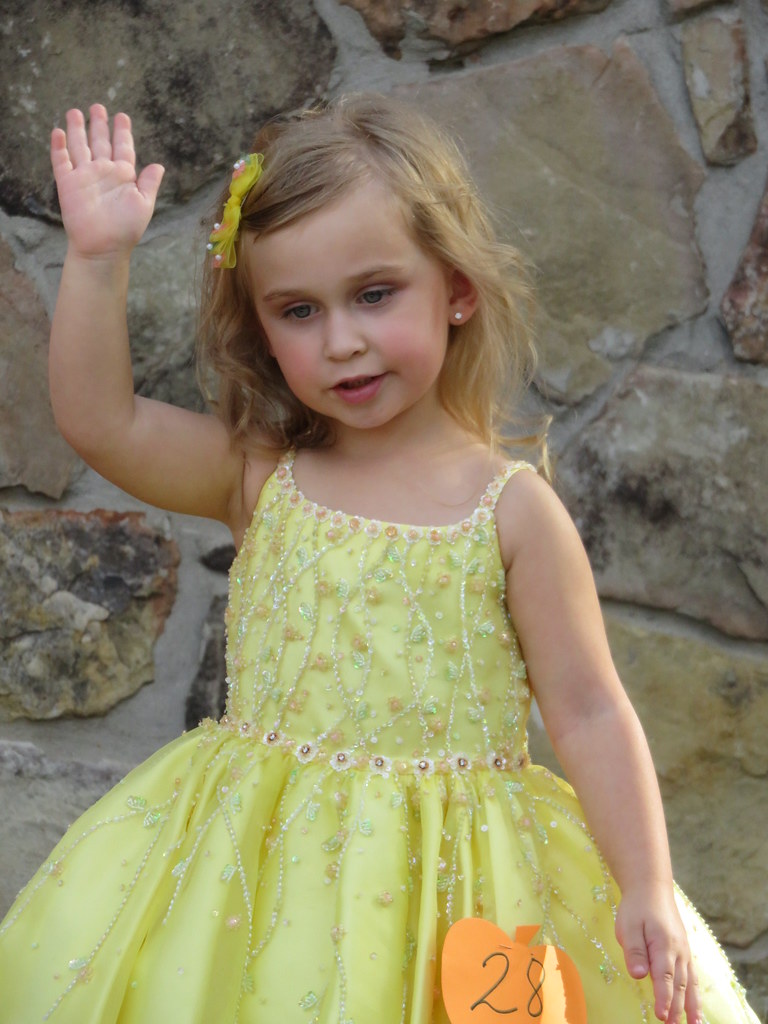 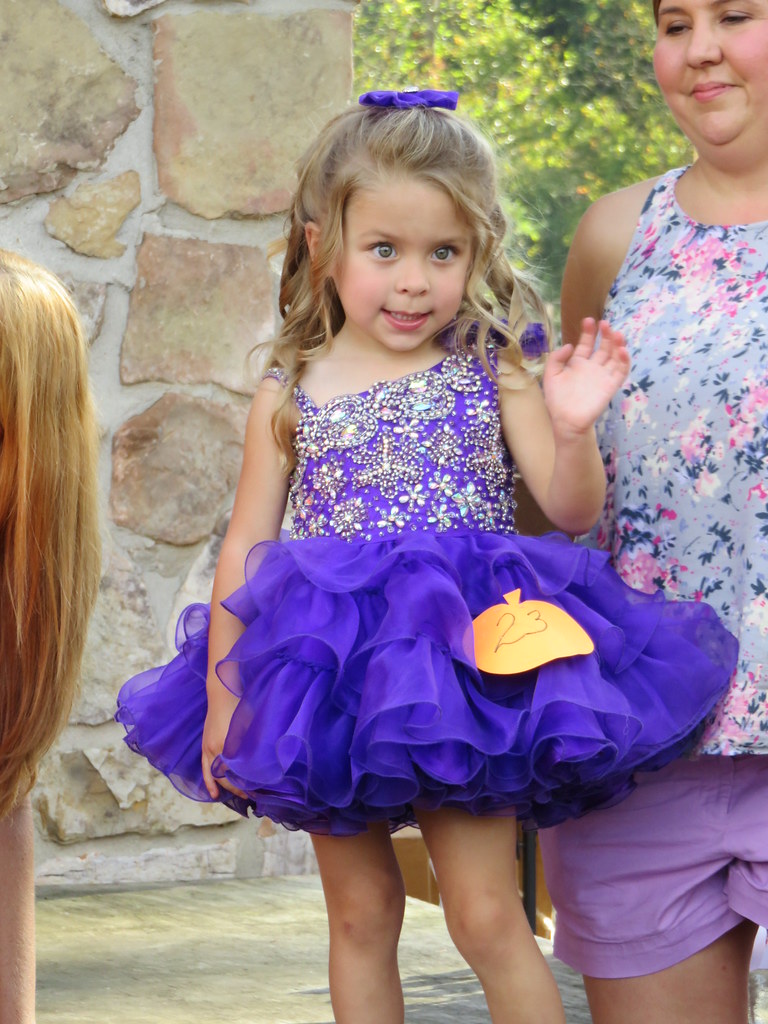 As we reached Gatlinburg which is at the entrance to the national park I decided to lead us to one of the many distilleries in the town. Worst decision ever. The traffic was horrendous, the parking lots were full and it was extremely stressful so we reluctantly turned around. Instead we headed north to Sevierville where we were planning to stay for the night. It was a four lane road but Pigeon Forge turned out to be the longest town on earth. It was like Vegas for families with go kart tracks, stampede dinner shows, Dolly Parton attractions (she’s from this area), amusement parks, eateries, souvenir shops etc, the traffic was grid lock and we had nothing to do but stare at the tacky lights all around us. We hated Tennessee at this point and we didn’t even get to see it. We haven’t seen any traffic like this on our entire trip and we had to pull over and eat and wait for three hours till the traffic began moving. I asked the info lady if it would be less busy on Monday and she very confidently said no – it was October, the leaf changing season so its packed out everyday. So the next morning we woke at 7am and headed into the National Park to the Cades Cove. It was a scenic drive that wiggled alongside a river but it definitely wasn’t ‘wow’ scenery. The end of the road had an 11 mile loop which is said to be a great area to spot black bears. It was a single lane road and after only a couple hundred meters we were stuck behind two slow cars. Signs said anyone going less than 25mph should pull over but these guys weren’t and eventually we caught up with another back-log of cars. So for 11 long miles we reached a maximum speed of 7mph and I was beginning to lose my temper. The car jam all came to a stop and we thought someone had spotted a bear. It turned out to be a white tailed deer and everyone took their time snapping photos of the deer while we became more irritated. At last they stopped taking photos and the front car gently tapped his gas peddle and left a slimy snail trail behind him. Cyclists over took us, and at times so did hikers and then all cars bloody stopped again. We tried to stay positive – a bear, let it be a bear sighting. Oh for Christ sake! It was wild turkeys!!! They’d stopped to take photos of food they eat at Christmas! A car ahead of us began honking which chirped me up – it was enough to scare the turkeys off and teach the selfish buggers to pull over next time. It took over an hour to finish the loop-road and we didn’t even want to stop and hike out of fear of the queue of traffic when we left. We eventually pulled up for a very late breakfast and decided we hated the park. Not the park per-say but how disorganised it was. I hate travelling on buses in national parks but the Cades Cove road couldn’t cope with that amount of car traffic and needed to have a bus service. We decided we’d had enough of the crowds and we’d try and drive the main road through the park today and be done with it, which was a big shame but it just wasn’t enjoyable. 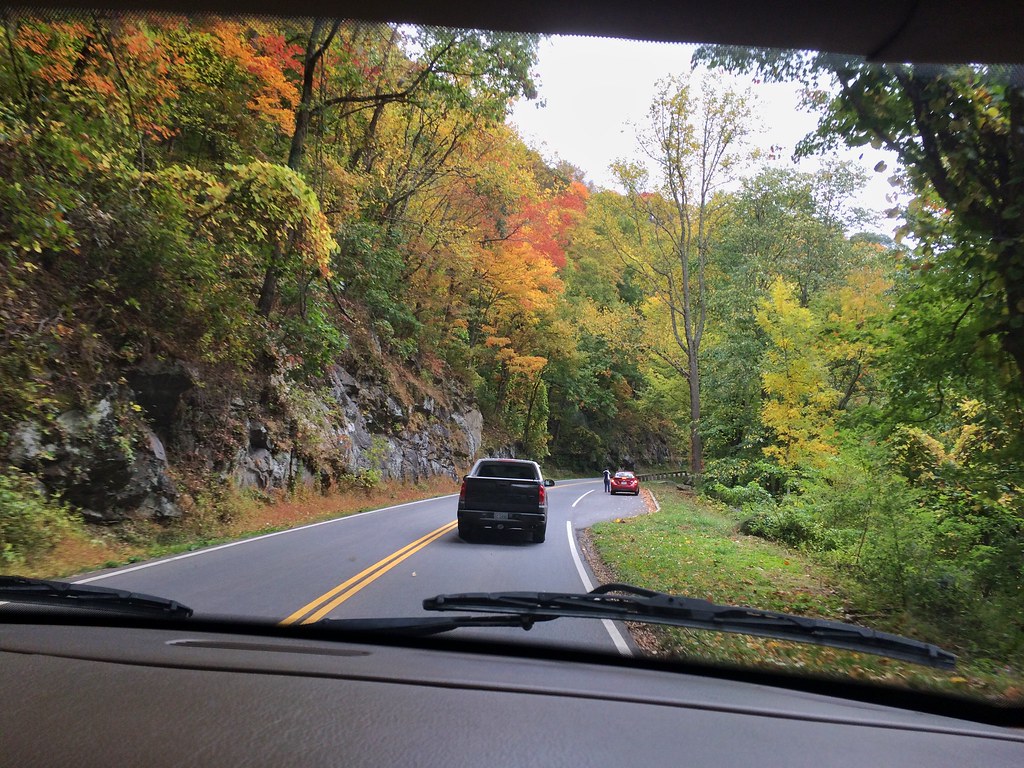 So we set off for Daphne’s final mountain pass on this roadtrip. As we climbed up we reached a very popular area where I wanted to hike called Chimney Top and luckily a parking spot became available. The hike had a gradual climb and then a load of steps which we began plowing up. A group of 18 year olds started catching us up and were on our backs like a lingering fart. I wanted to stop and catch my breath but we persevered, not wanting to be defeated by youngsters. With stitches and breathing like we were 80 year olds with chest infections we made it to the top! We were then greeted with the grand finale of the trail; a rocky sort of wall at quite a vertical angle had people spider crawling up it. We joined in and began grabbing rock ledges and heaving ourselves up using foot holds. We were climbing up a pretty narrow ridge and at times I looked down and questioned myself. It was all worth it in the end as the view was phenomenal. The ridge continued on into the distance with a few fluorescent yellow and red trees clinging onto the steep edges. It was just awesome how the ridge was the centre piece of the scenery and we were standing in the middle of an orange-tinged, mountainous landscape. A couple of brave souls were visible at the far end of the ridge and we were considering continuing on until we saw the vertigo inducing climb down. A guy returning said he was struggling to get back up so that route was a definite no no for us and we were satisfied with the incredible view we had. 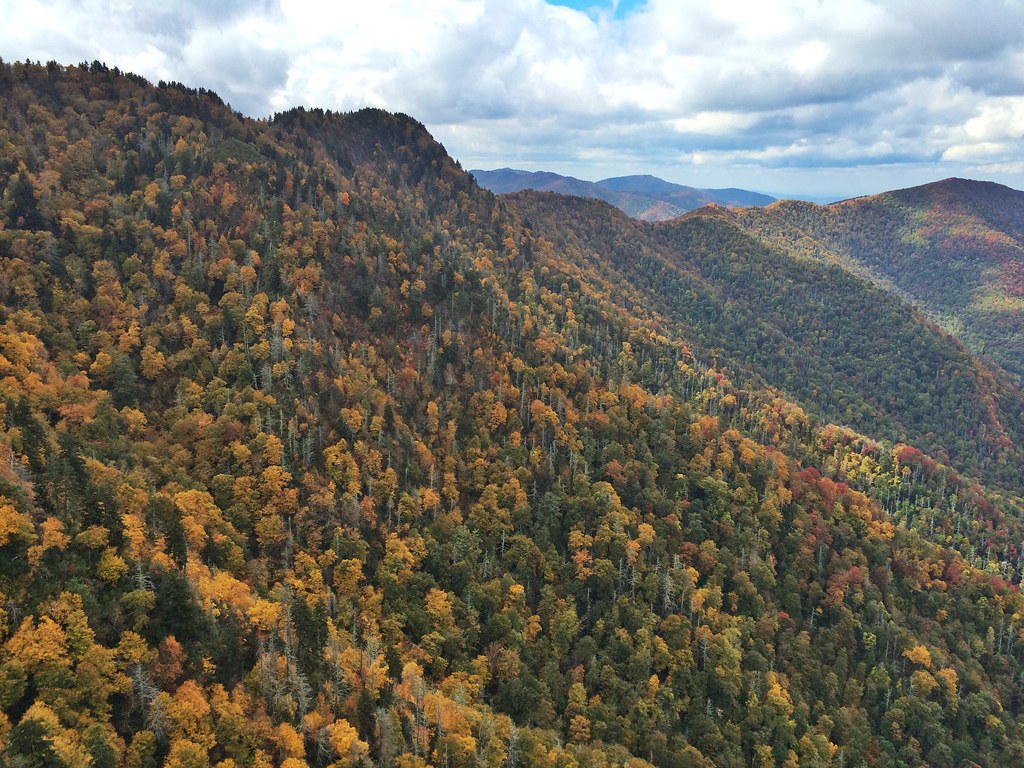 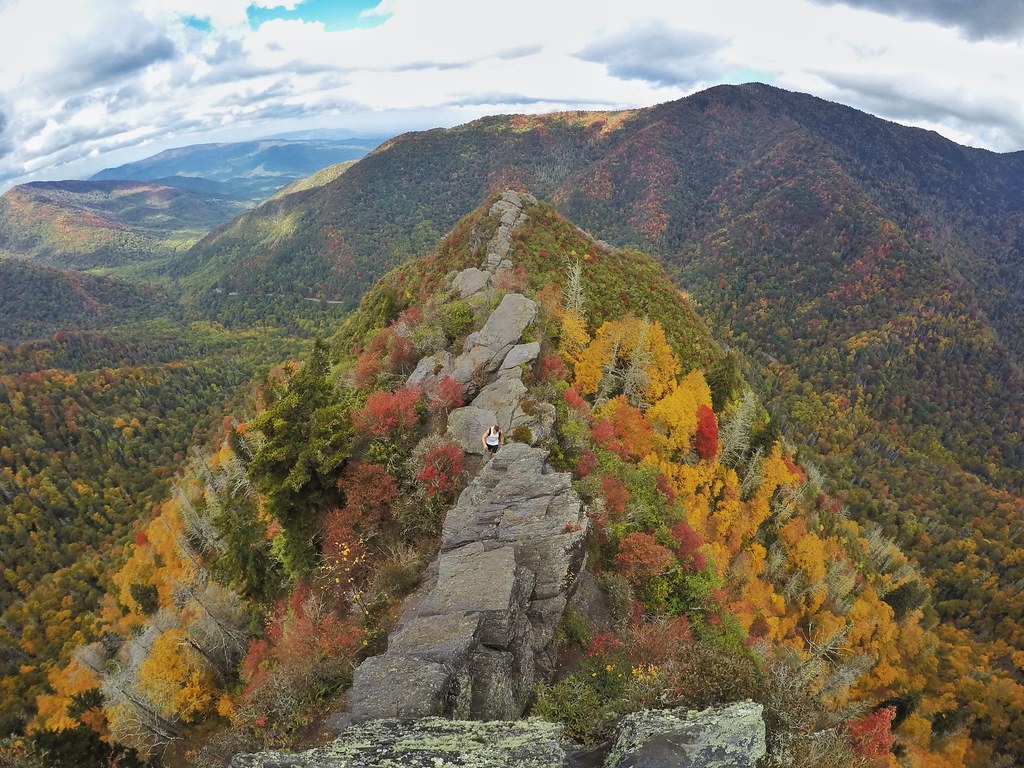 The climb down was a lot scarier than the way up. We couldn’t find or see foot holds and had to slide down on our bums or take risky unknown steps and leaps. Craigs vertigo suddenly hit him on one section as he was struggling to get down and his legs began shaking. I was fine luckily but another man had stopped because he was too scared he would fall. He asked me to put his camera in my backpack till he got down as he knew he’d fall and break it. The camera survived and so did we. We were hot and sweaty after the hike and one bridge crossed over some idyllic swimming holes in the river so we went for a very refreshing dunk before continuing the drive south.

The road climbed up to 5046ft where the Tennessee and North Carolina borders met. The weather really clouded over so the views were hazy and unimpressive which was a shame. As we rolled downhill in low gear we got some nice glimpses of the layered mountains and fall foliage. 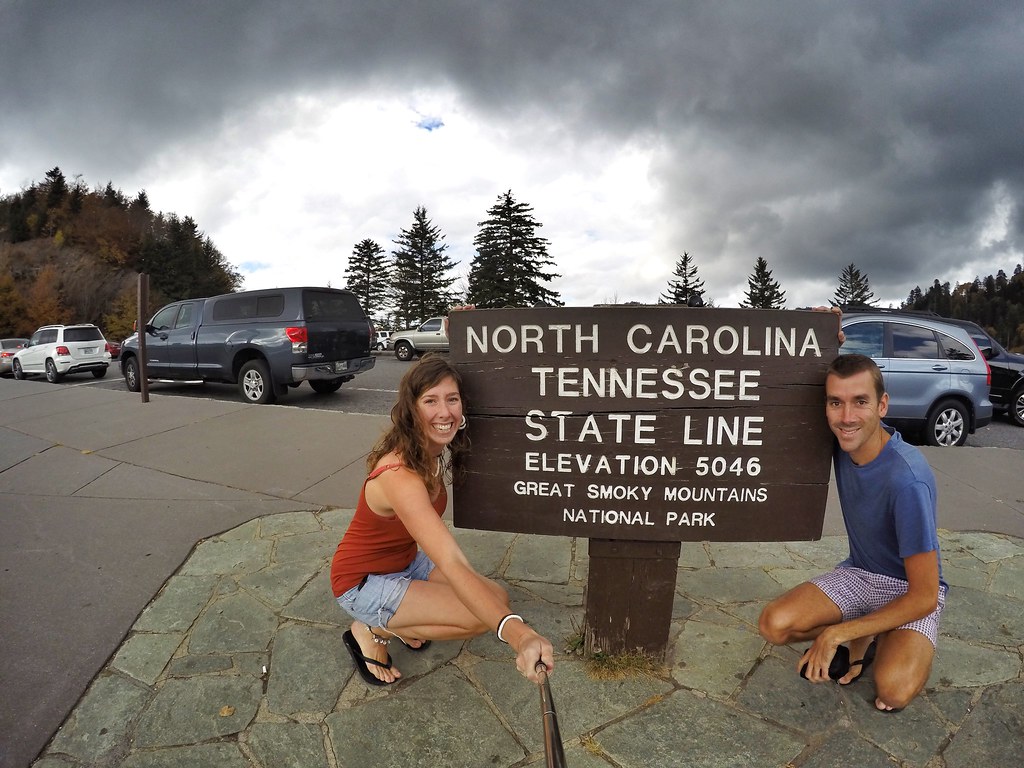 We had no idea that elk lived in this area of the park so we were super chuffed when we saw a flashing warning sign for them and decided to pull up by a bright green field and hope we got some visiting elk. It paid off as we saw a female in one field and a small bull and female hiding in the bushes. It’s the rutting season so we really wanted to see some exciting action but maybe tonight wasn’t the night. We did a little spin up and down the road and noticed a bull elk down by the river. He was humongous!! A 16 pointer and built like a brick wall. He went along the river bank and then ventured into the shallow water for a drink. We were up on the bank admiring him when a couple came along to take some photos. Suddenly the elk moved our way fast, so we quickly moved away incase he charged us. Male elk are extremely dangerous in the rut and will charge anything from lampposts and cars to humans and trees. I stopped after a few meters and looked around to reassess where he was going, I had lots of trees around me to hide if need be. Craig in the meantime had ran a marathon and sped off behind a nearby building!! We re-grouped and kept looking behind us for the elk but we couldn’t see him so decided it was time to leave. Craig told me that when he ran off the lady photographer had pointed and laughed at Craig after his frantic run. We both laughed. Then we heard some kerfuffle behind us and the couple were running for their lives! Oh my god the elk must be charging them we thought, then the women tripped and flew through the sky, her camera slipped out her grip and took flight too before she landed face first into the leafy ground. We were standing in shock not sure what to do, was the elk about to appear and ram his antlers into her back?! Apparently not – the elk never reappeared and the lady quickly got up and brushed herself off. Knowing she wasn’t in danger and had just laughed at Craig for running we both let out giggly snorts till we were far away enough to roar with laughter. Karma my friend. 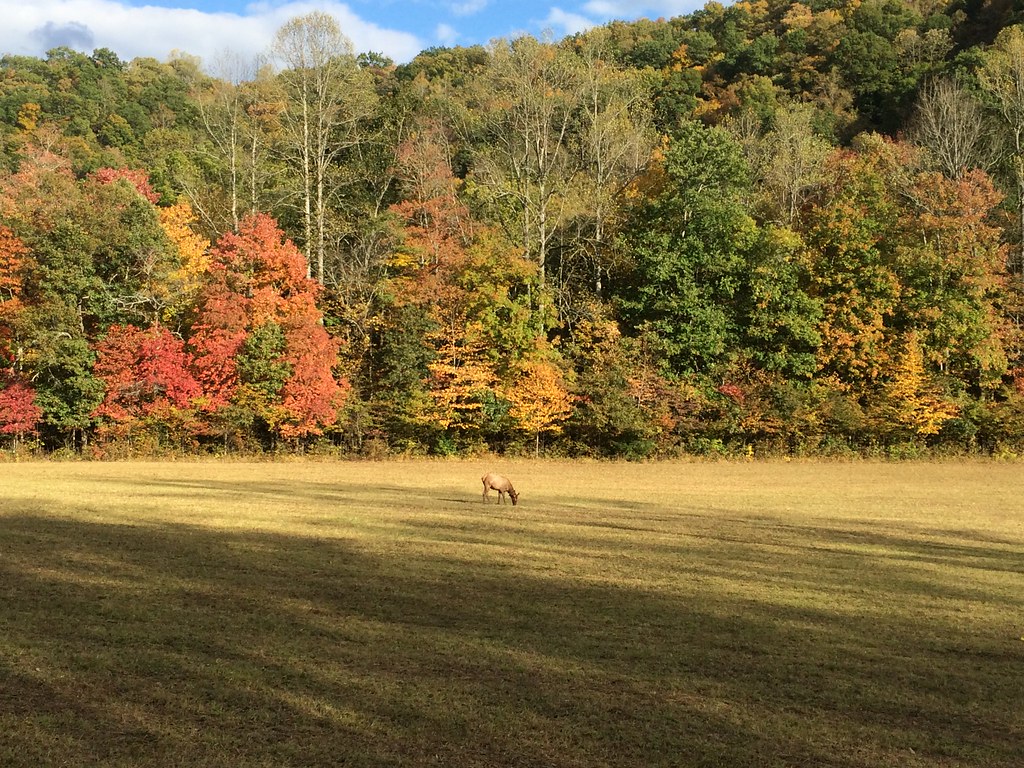 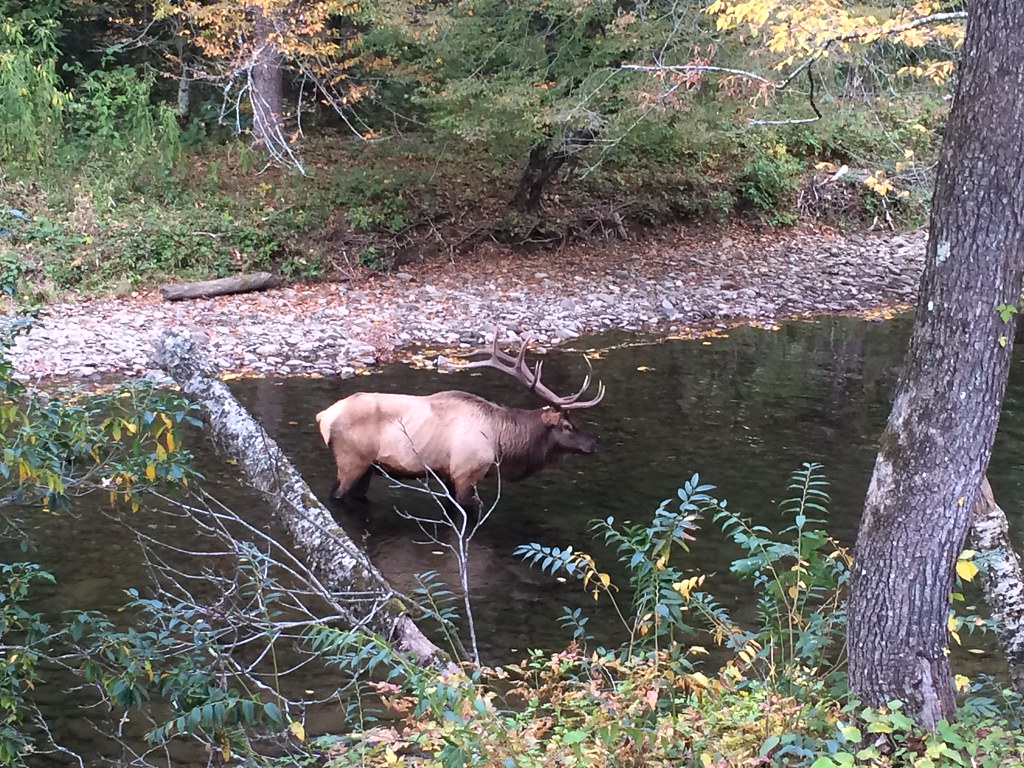 We crossed from North Carolina into Georgia where the accents became so strong we could hardly understand what the locals were saying. After not being able to taste some Tennessee moonshine in a distillery we pulled up at a liquor store and I reluctantly forked out a small fortune ($20) on a mason jar of moonshine. I went for one of the unconventional flavoured ones and tried blueberry muffin. It was disgusting. To be fair I don’t really like alcohol except beer and baileys on ice so a straight spirit just takes me back to being a teenager at a house party and drinking anything available. It burnt my throat and I tried to pretend I liked it so Craig wouldn’t be annoyed that I’d wasted money on something I didn’t like but my face screwed up too much and I haven’t had a sip since. Pretty much just paid $20 for a mason jar filled with petrol.