The Autumn colours finally started to show more as we reached Doughton Park. The road also had some nice sections of open pastures so the trees got extra sunshine and those areas popped with colour. We enjoyed a short walk up some bald hills to a dramatic view of the layered mountains. It was such a beautiful area that we decided to camp nearby and watch the sunset. We found an idyllic spot with vast views and we watched the sun sink behind the mountains right in front of us. As soon as the sun dropped, the moon rose and lit up the sky like a spotlight shining down on us. 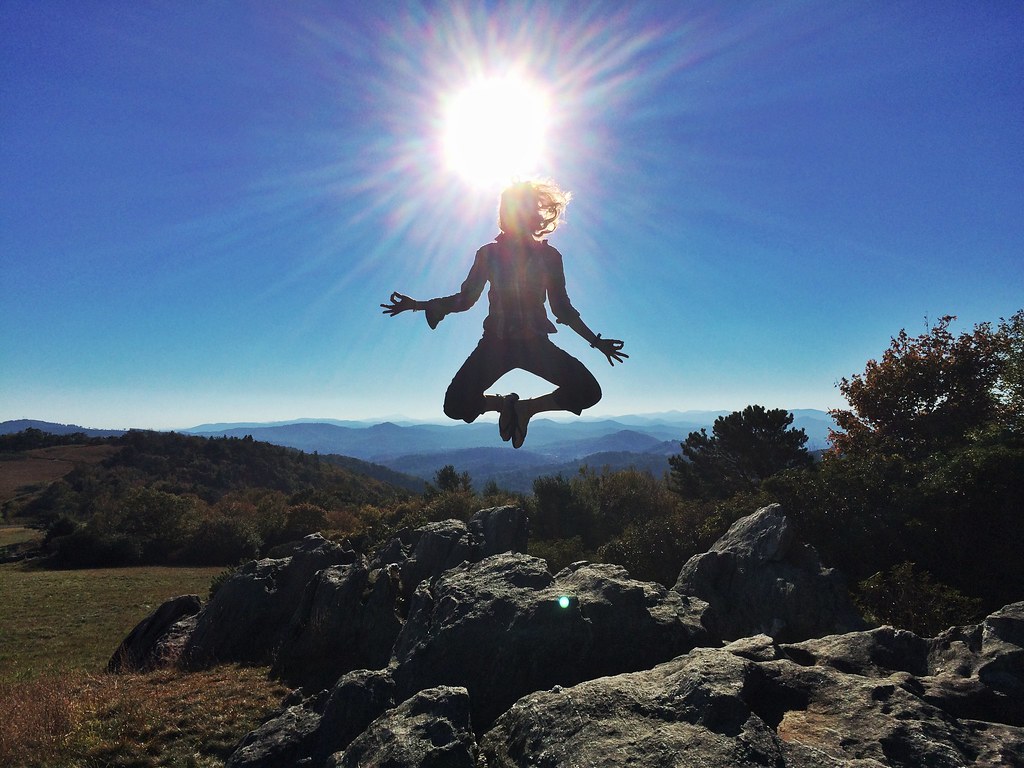 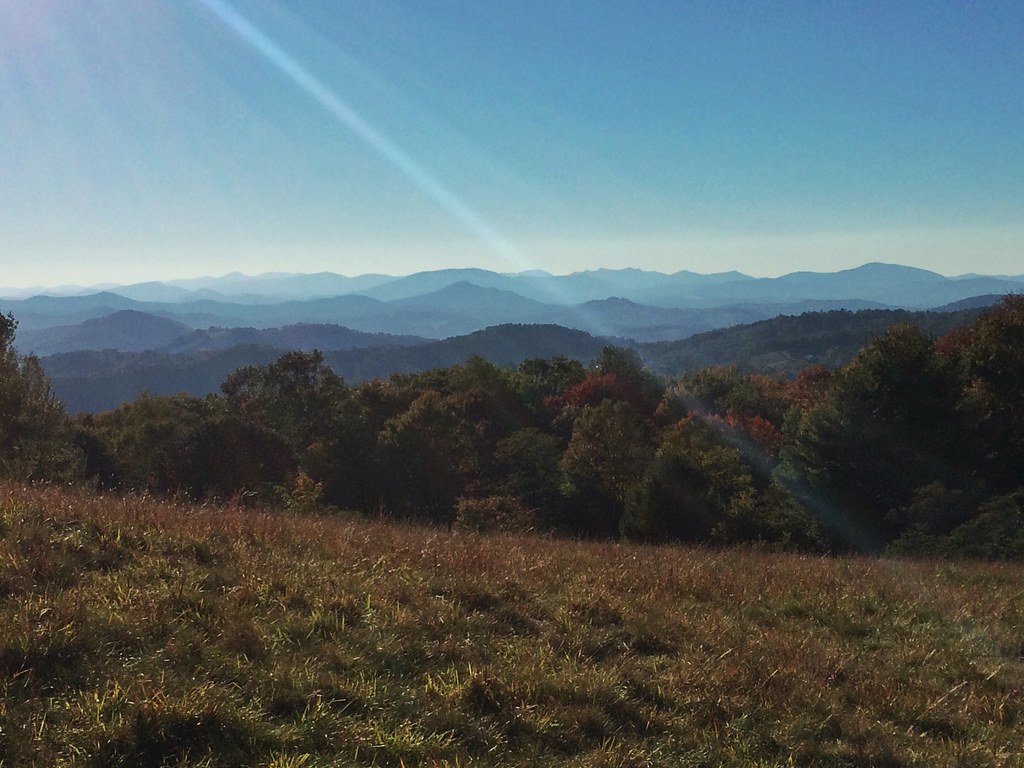 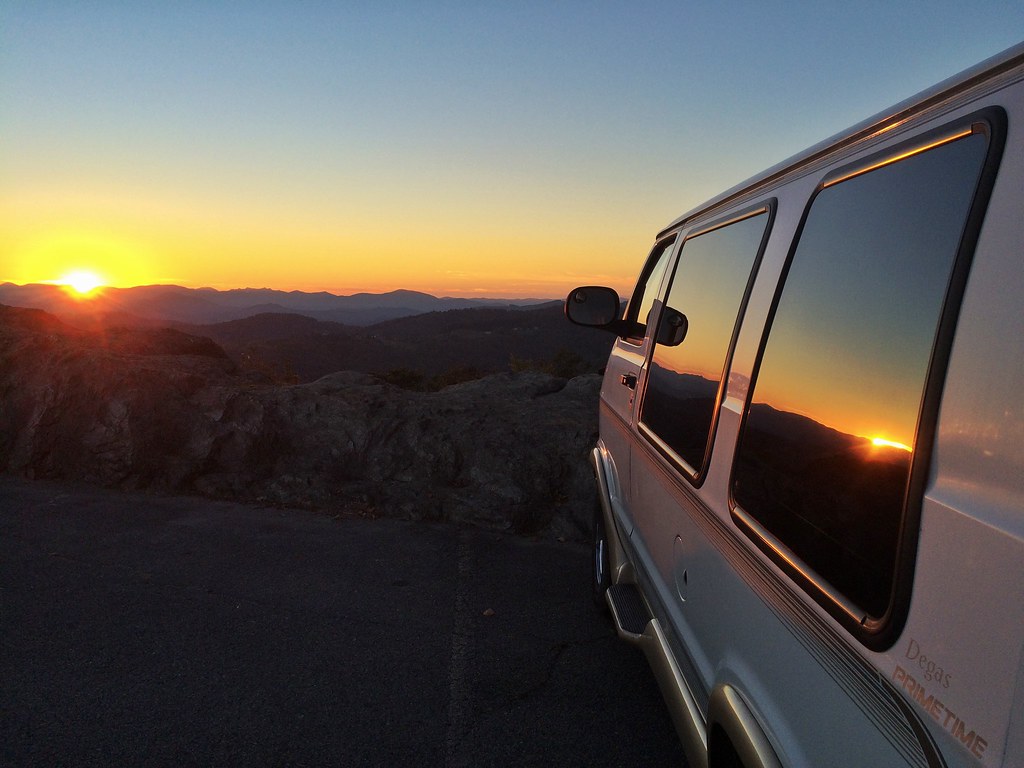 Thankfully as winter is approaching sunrise is starting at a much more acceptable time. We set our alarm for 7am and the sky was already lighting up with a navy top and orange rims. We had a bit of a frantic jog up a few hills searching for a good vantage point and picked a nice spot atop a rock. It was lovely and peaceful without anyone else around. The clouds turned pink and the sun pierced the tops of a hill before totally illuminating this side of the world. 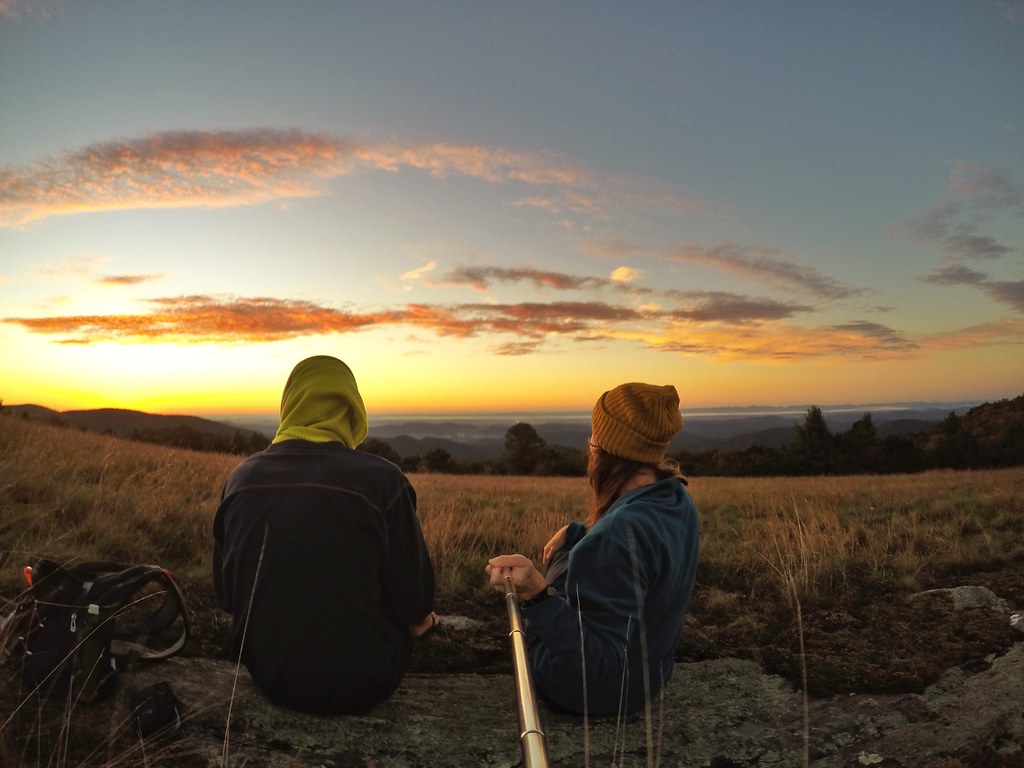 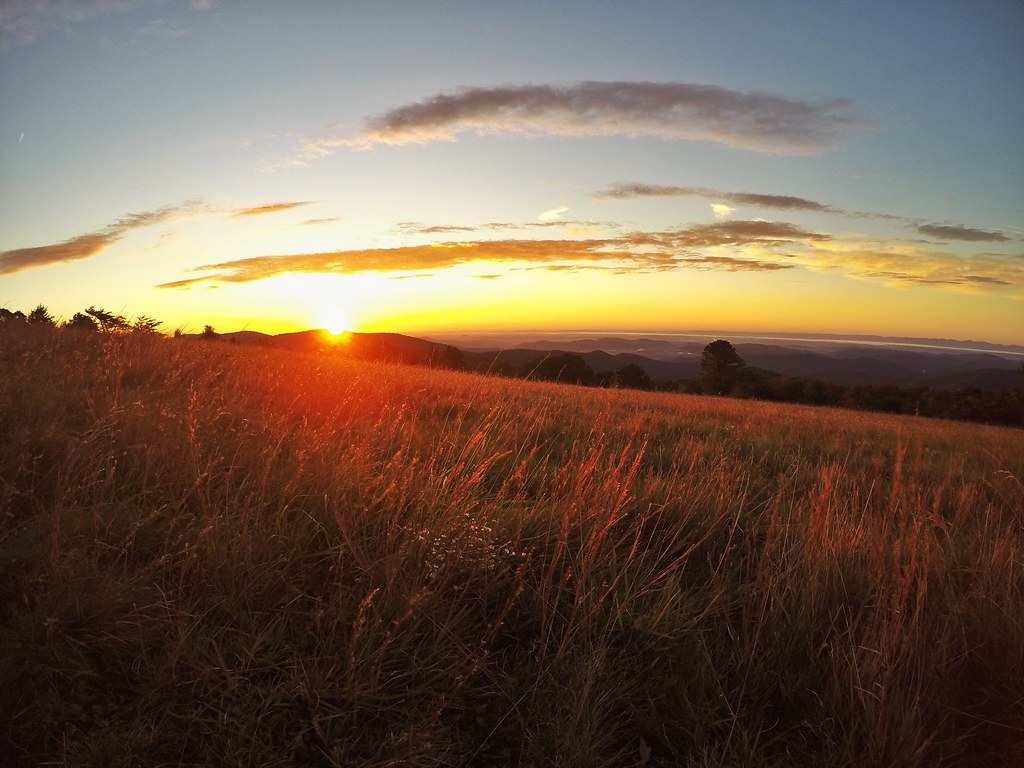 The area around Julian Price Memorial Park was dotted with vibrant red and yellow trees and we were no longer pointing out the odd tree as they were becoming abundant. The magic really began to happen when we reached a view of the Linn Cove Viaduct. We rounded a bend and both said “wow” as the hillside around the viaduct was a kaleidoscope of colours. Nearby was a pleasant walk to Linville Falls where Autumn colours reflected in the river and a short trail led above a gorge and the waterfall. As we walked along the trail and looked up, the woods were ablaze with colour and lots of vibrant reds. 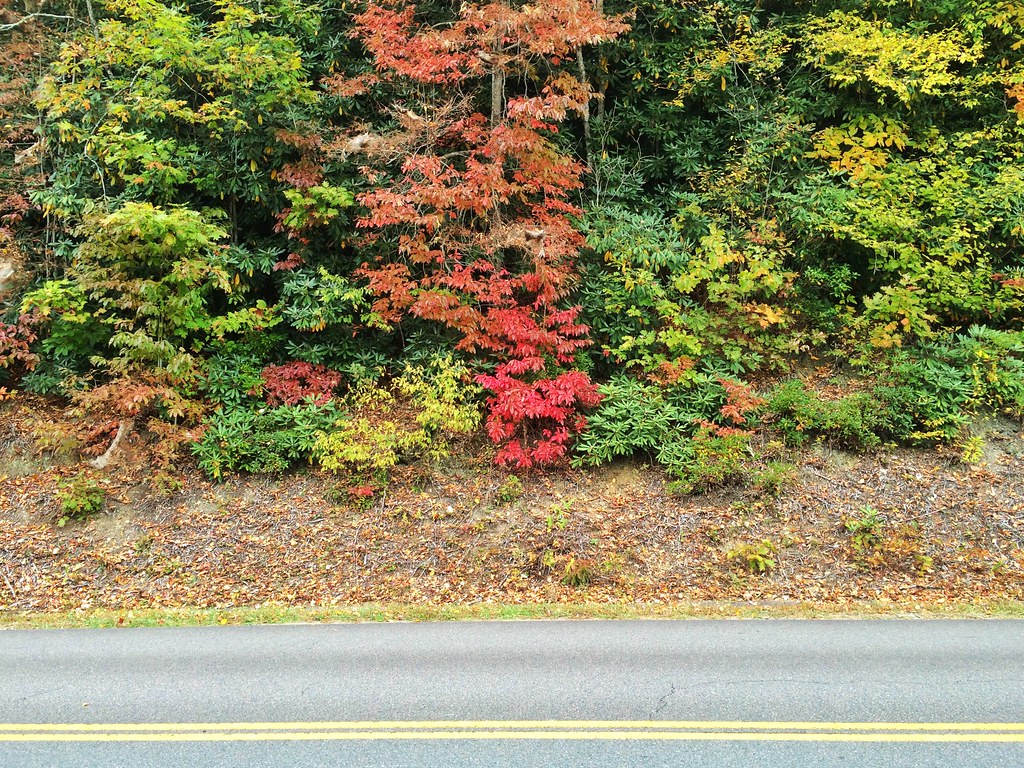 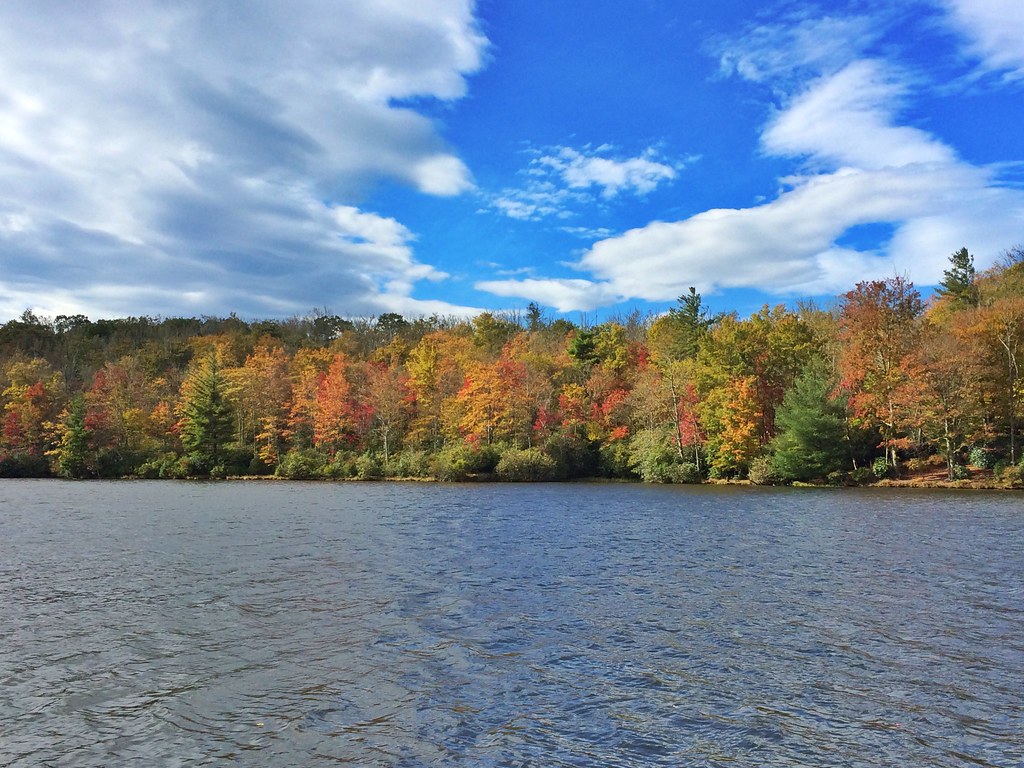 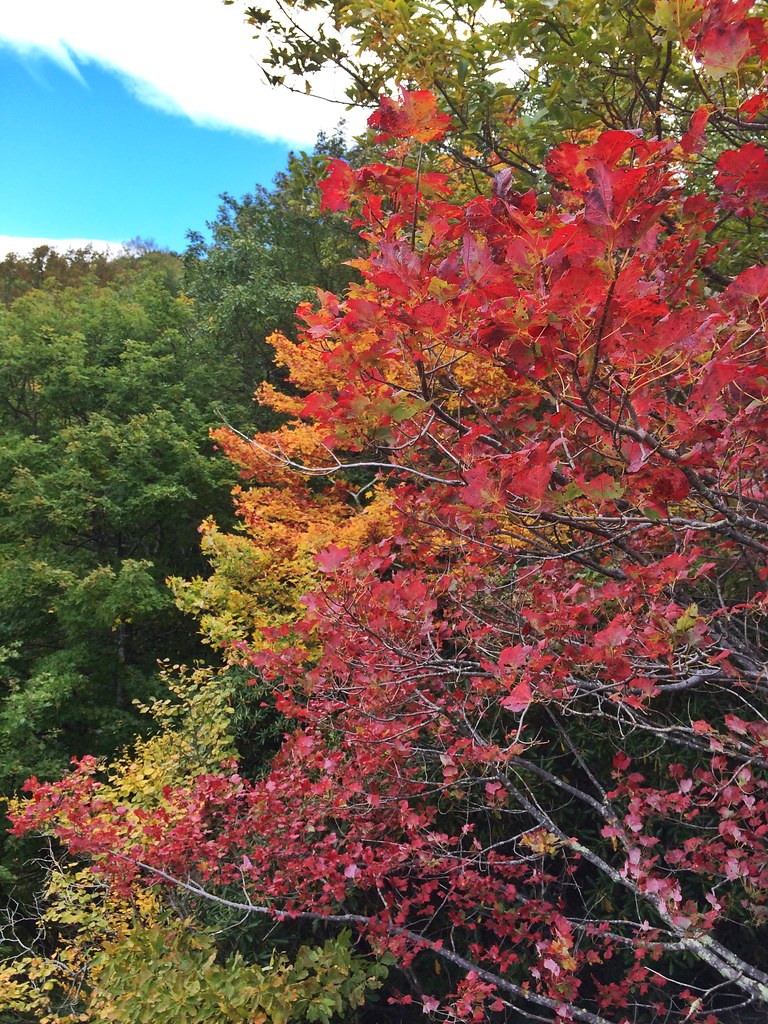 Heading south on the Blue Ridge the colours became more consistent. We veered off to visit the Mount Mitchell State Park where the mountain its named after is the highest peak east of the Mississippi. The road was lined with scarlet red berries on the mountain ash trees and made for a stunning drive. A short walk led us up to the summit where we were above a sea of clouds, a view I just love seeing; when you hike (or drive) high enough it can feel like your a plane in the sky. 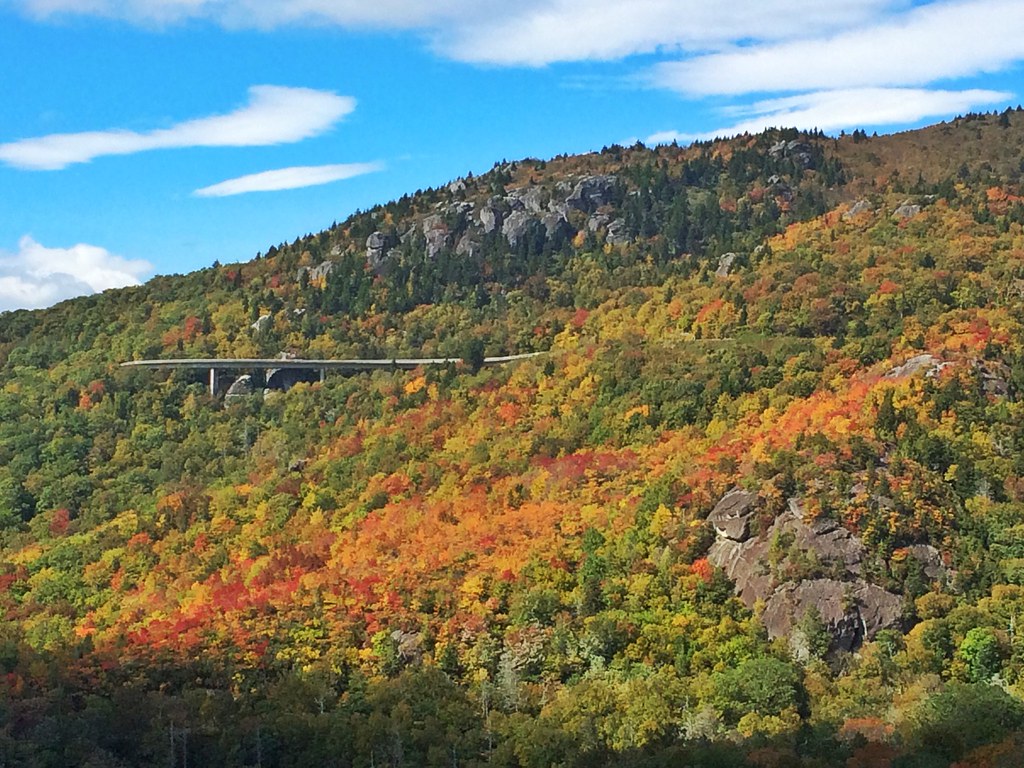 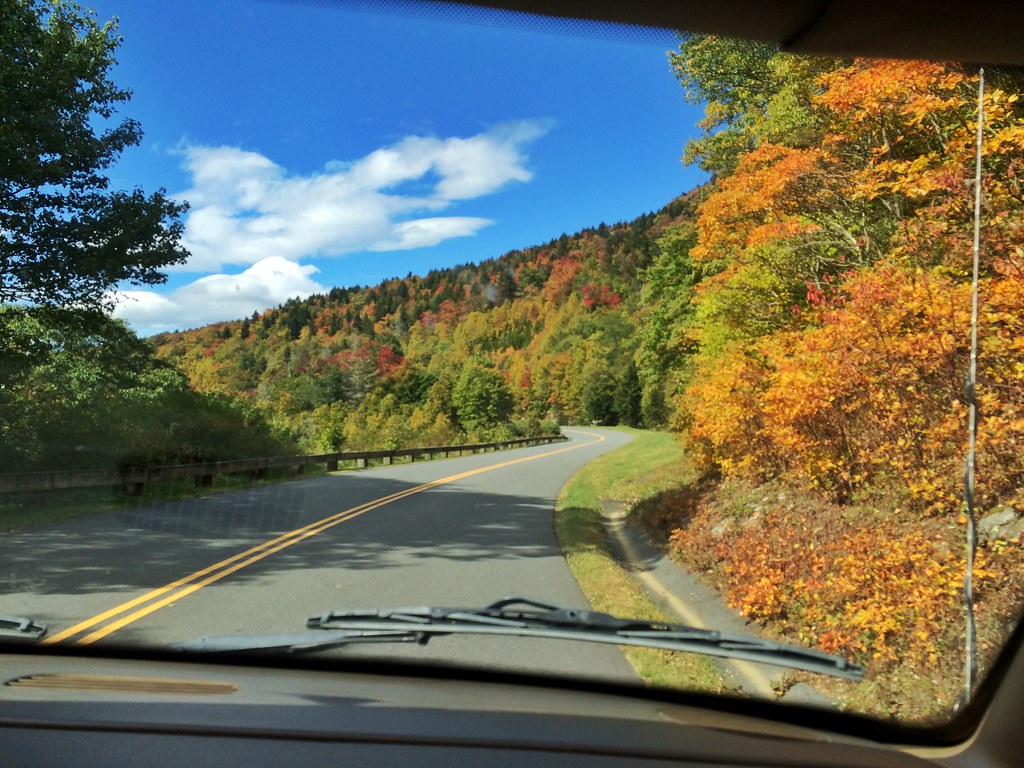 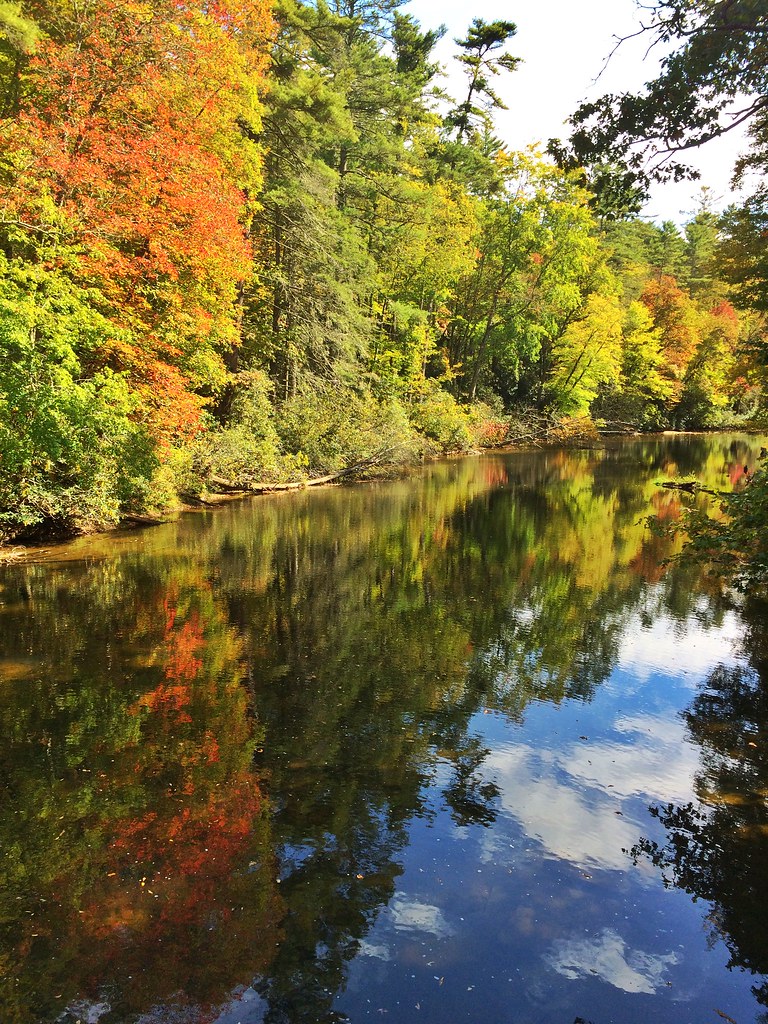 The main mountain visible from the top was named Mount Craig, it’s the second highest mountain east of the Mississippi so of course Craig had to climb the mountain named after him. It was an easy short climb that led to a rocky ledge with a view to the cloudless west where the hills were all yellow and orange and dotted with green pine trees. A prominent hill stood in front of us and its south facing side was once again covered in eye popping colours! It was awesome! 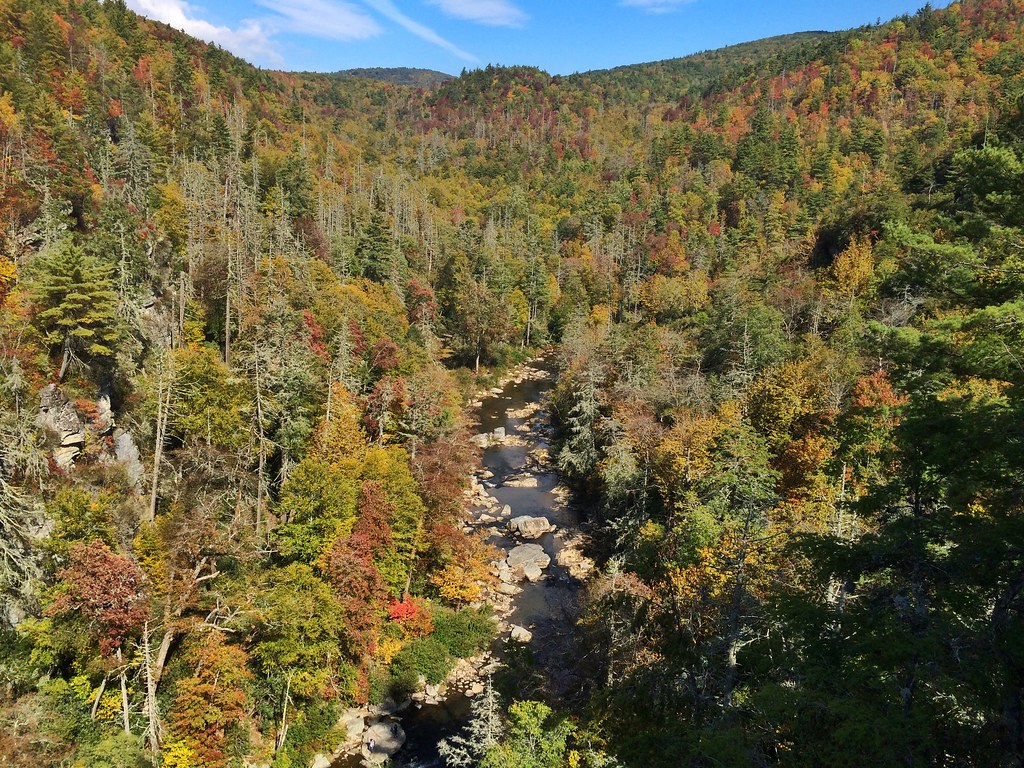 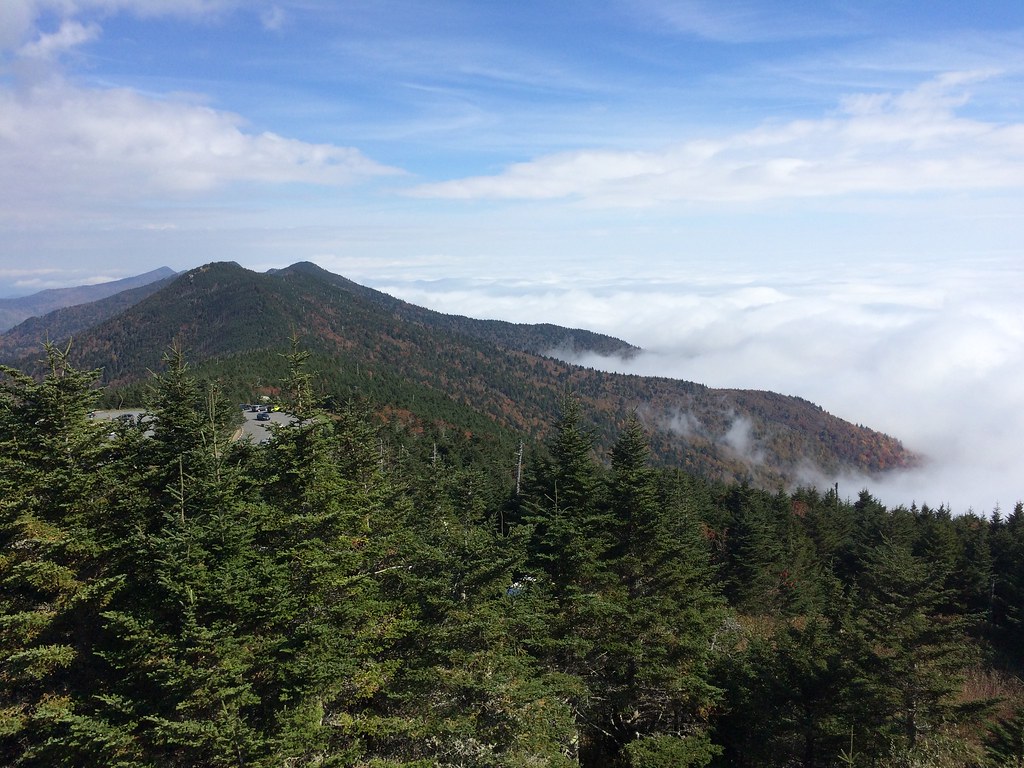 Later in the afternoon we pulled up at the Craggy Gardens area which, like Mount Mitchell is high in elevation and therefore a good area to catch the early Autumn colours. What was more striking than the leaves, were the berries on the mountain ash trees once again. Here there were more than we’d ever seen, like a festive display around the mountain tops. We did a short but sweet hike up a pinnacle, like less than a mile – and a group of college students were heading up ahead of us asking people how much further till the top! Geez, you only just started walking! 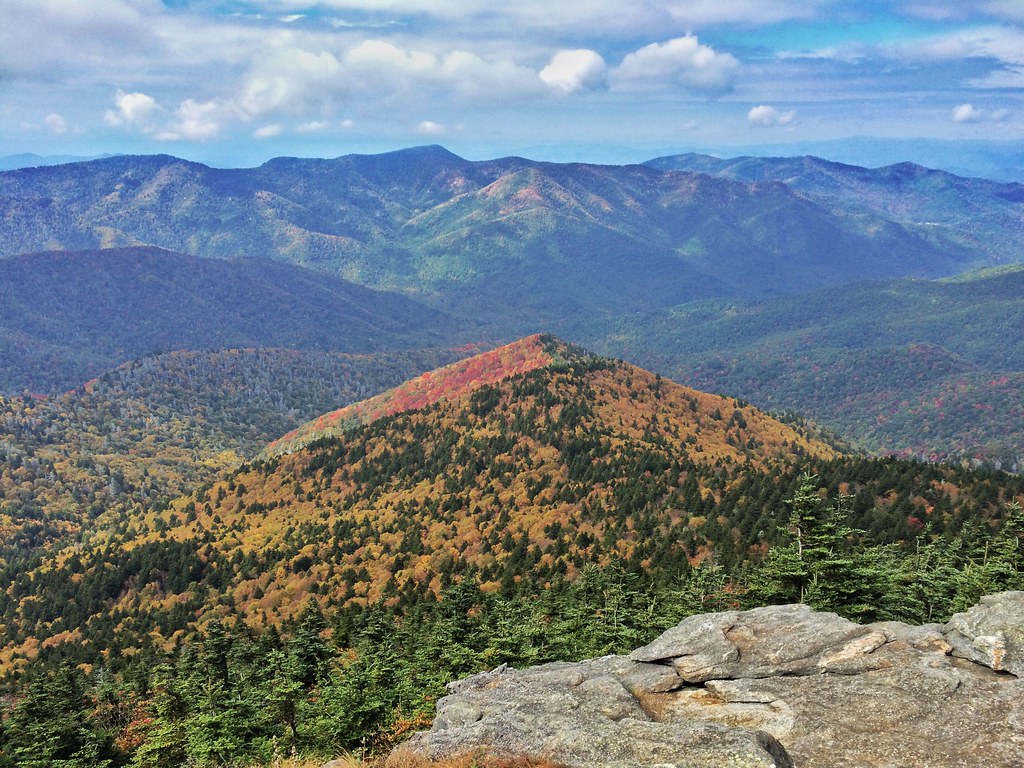 The view from the top was filled with hilly vistas and colour everywhere. It was a little cloudy but the sun was managing to creep out and we sat on the edge of a rocky ledge for some photos. A man behind us loudly said ‘Ugh, there’s always someone that has to tempt fate!” I looked around and smiled, I’ll do as I wish thank you sir! 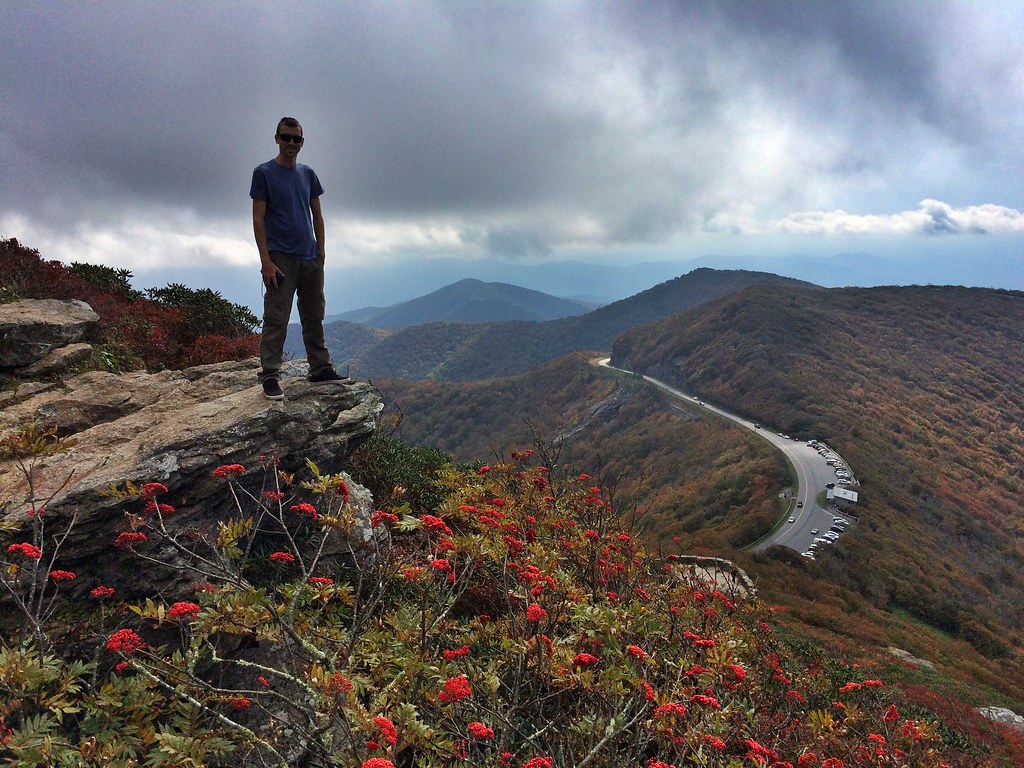 When we got back to Daphne clouds rolled over the mountain we’d just climbed and obscured all the views. A long downhill drive took us to the bottom of the ridge till we ended up in Asheville – an intimidating sight after such quiet, calm roads. There were cars everywhere but with a few wrong turns and some panicked map reading I eventually got us to the visitor centre. 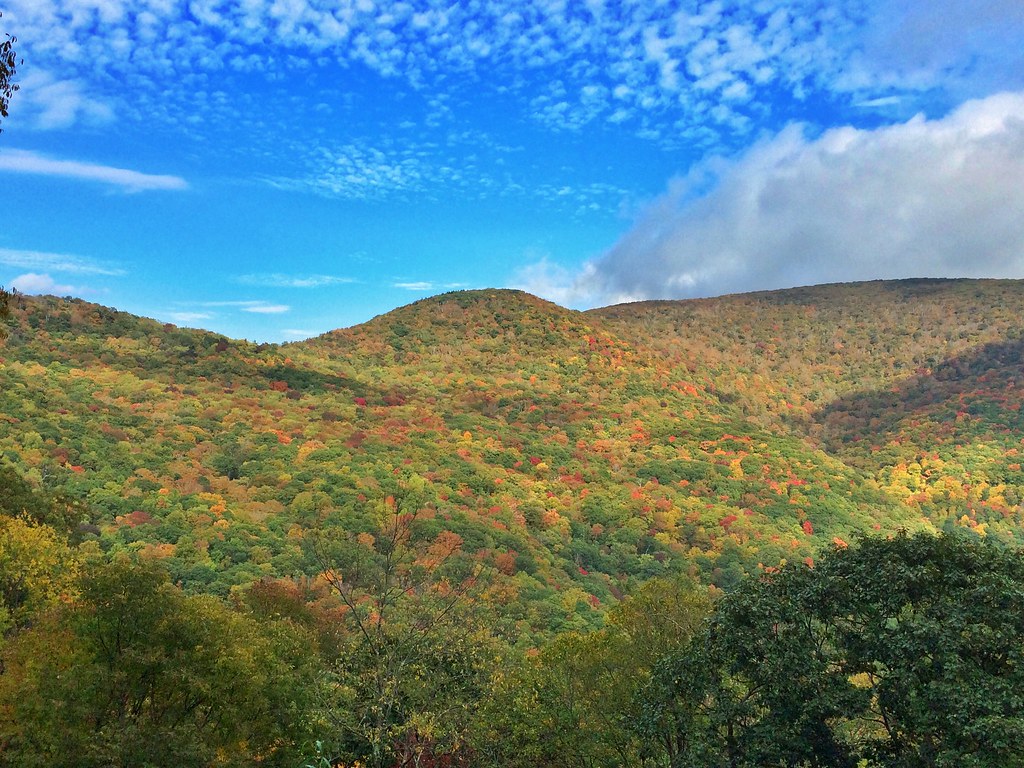 Asheville really reminded us of Brighton, the city we’re from in England. It was full of quirky shops, all independent restaurants, and buskers. We heard ukulele players, Appalachian mountain style musicians and there was even a man offering his poetry skills by typing on a vintage type writer on a street corner. We followed the noise to the beating heart of Asheville; the Drum Circle. It was a big concrete circle with steps around one side for people to sit on. In the middle were two men with massive drums setting the beat while about 6 others sat on the steps playing bongos and other drums. It was delightful so we took a seat and found it hard to leave. It became apparent that there was no ‘group’ and anyone could bring a drum along and join in. A couple of very skilled men had quite elaborate drums and would usually be the ones to go wild, improvising beats and causing everyone to speed up along with them. As the beat sped up the a atmosphere buzzed and the crowd began cheering them on. By the time we were leaving there were over 20 drummers, and a big mix of people. I just loved how it was such a community vibe, men in business suits turned up, retired couples, children, hippies, it was wonderful. 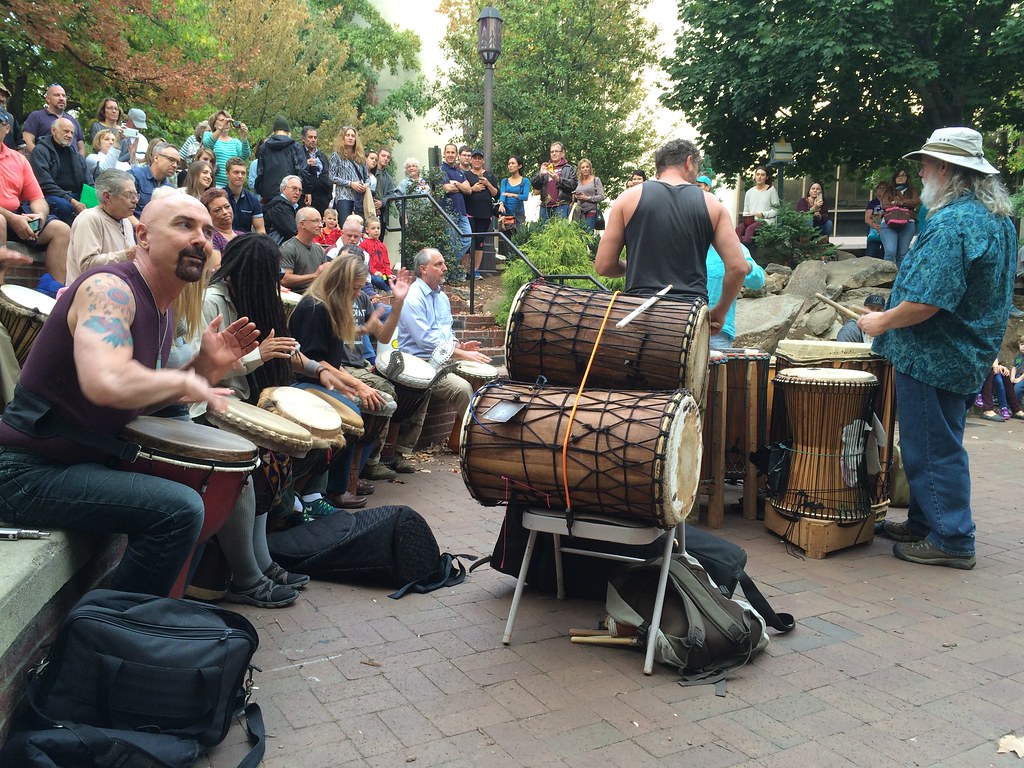 We checked out some menus as tonight we thought it was about time we treated ourselves, plus Craig has been eating my vegetarian diet for 6 months and had cravings for chicken wings. While looking at one menu a couple of locals heard our accents and started chatting to us. I don’t know how Americans get anything done, they just love to talk – we love it though, they really are extremely hospitable.

After a tasty dinner in a brewery we headed back to the drum circle and went via a delightful gospel singer and even a ghost talk – after listening in for five minutes however we began to realise that he wasn’t a street performer but actually a paid tour guide so we scurried away. The vibe in the circle had totally changed as darkness took over. Everyone was up dancing and playing a variety of instruments now with drums, tambourines, maracas and cow bells. One extremely cute little black man was standing behind Craig shaking fake maracas, it was so sweet! Bare-footed hippy dancers jiggled their bodies and moved their arms in a mystical manner while stomping their feet. A well dressed lady about 50 years old suddenly appeared before us and started head butting and then doing the most awkward robot dance before stopping and swaying and repeating the crazy moves. We didn’t know where to look…it was so awkward watching someone that looked like they’d just eaten dinner in a really nice restaurant as drunk as a skunk. It was a very entertaining night to say the least.