After the long drive east it was finally time to head south towards Florida – the scenic route of course. So we started the journey in Shenandoah National Park where the Skyline Parkway begins. It’s an extremely scenic road that winds its way along a ridgline in the Appalachian mountains. Instead of normal pointy mountains we were used to, the Appalchians were lots of long fairly flat, forested ridges. They rose up and down and the pollution created a rather Asian look with the layered mountains fading into the distance. We timed the drive for Autumn but not only were the leaves behind schedule this year, they were said to be less vibrant than normal due to such a hot summer.

Our first day was extremely foggy so we just aimlessly wondered up a random fire road past extremely cocky deer who stood their ground as we walked past. The Autumn colours on the floor were fabulous, although looking up at the green trees I was baffled as to where they all came from. There were so many bright leaves that I decided to collect some and make a Virginia sign on the gravel path. Craig was riveted about standing in the mist for 30 minutes while my artistic vibes ran wild. 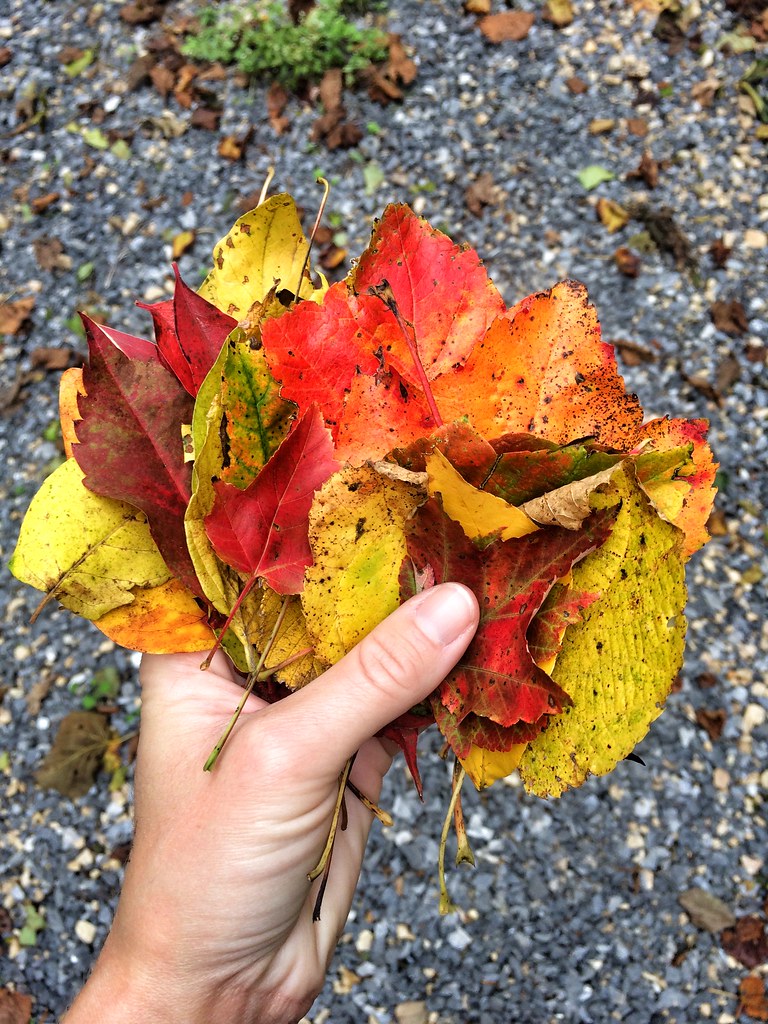 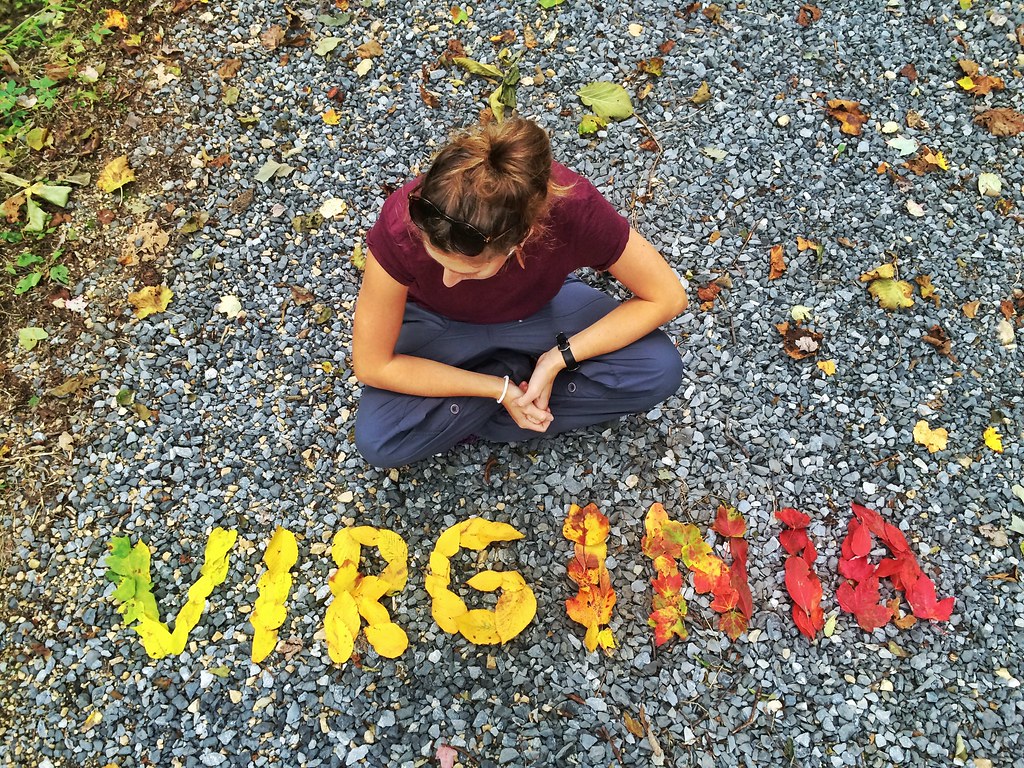 After a full day waiting out the rain we went back into the park and were greeted with clear blue skies. Because the road ran along the ridge, most of the hikes were very short as they’d already gained most of the elevation. We did 5 hikes in one day which consisted of climbing the parks highest peak, down to a waterfall, along a cliff edge and battling some wild winds. I don’t know if hurricane Mathew had anything to do with the winds but they were incredibly strong. We kept our eyes peeled for black bears who live throughout the Appalachians but didn’t have any luck. There were scenic pullouts all along the road so we pulled up for dinner at one and enjoyed the sunset which was delightful! 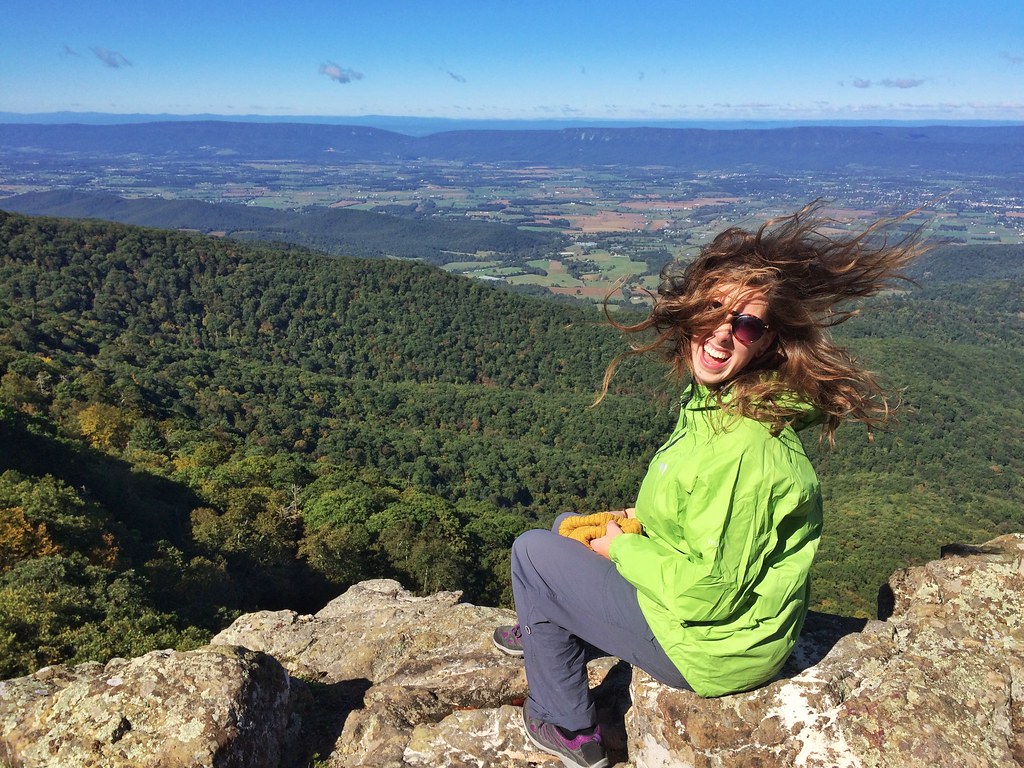 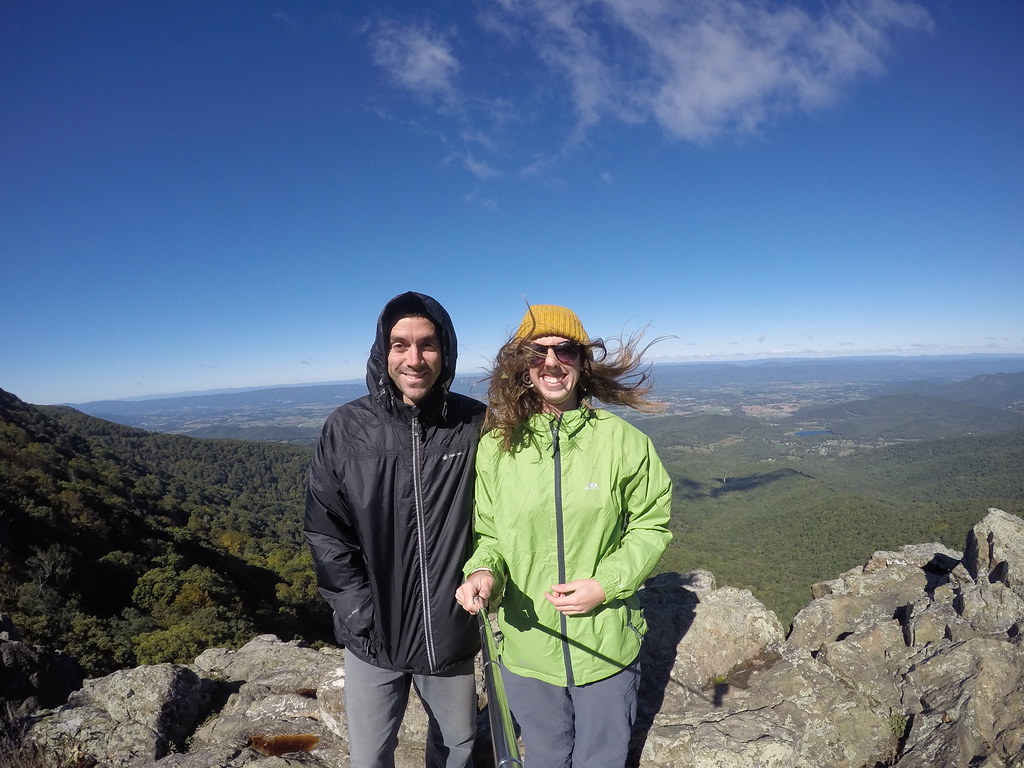 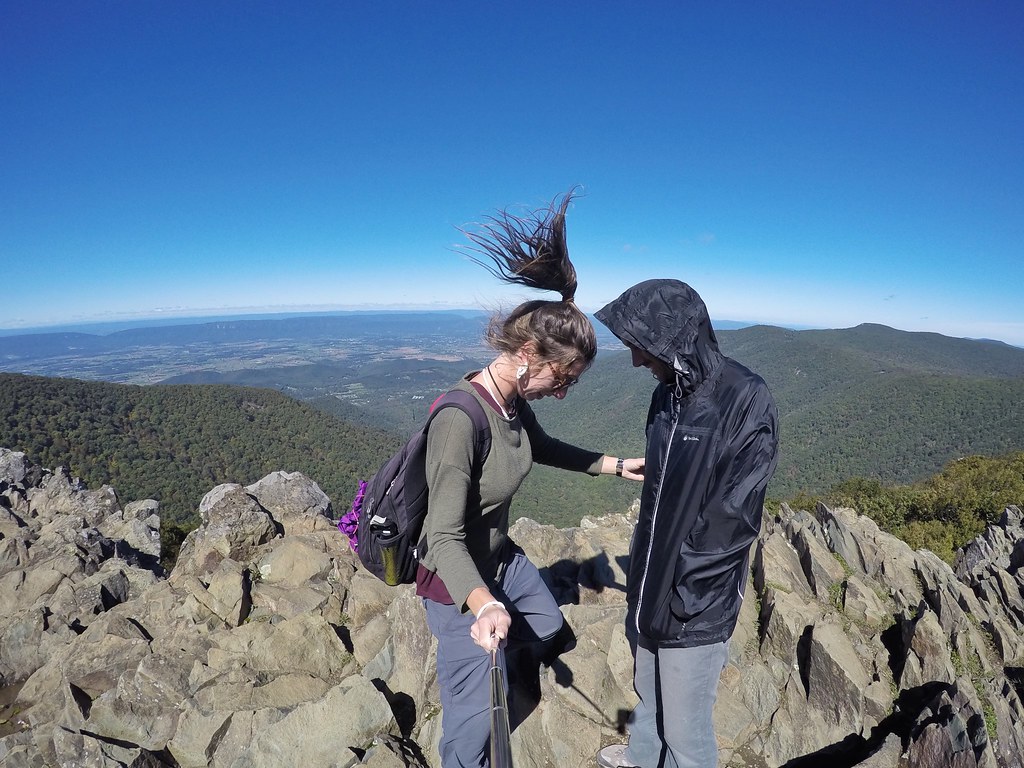 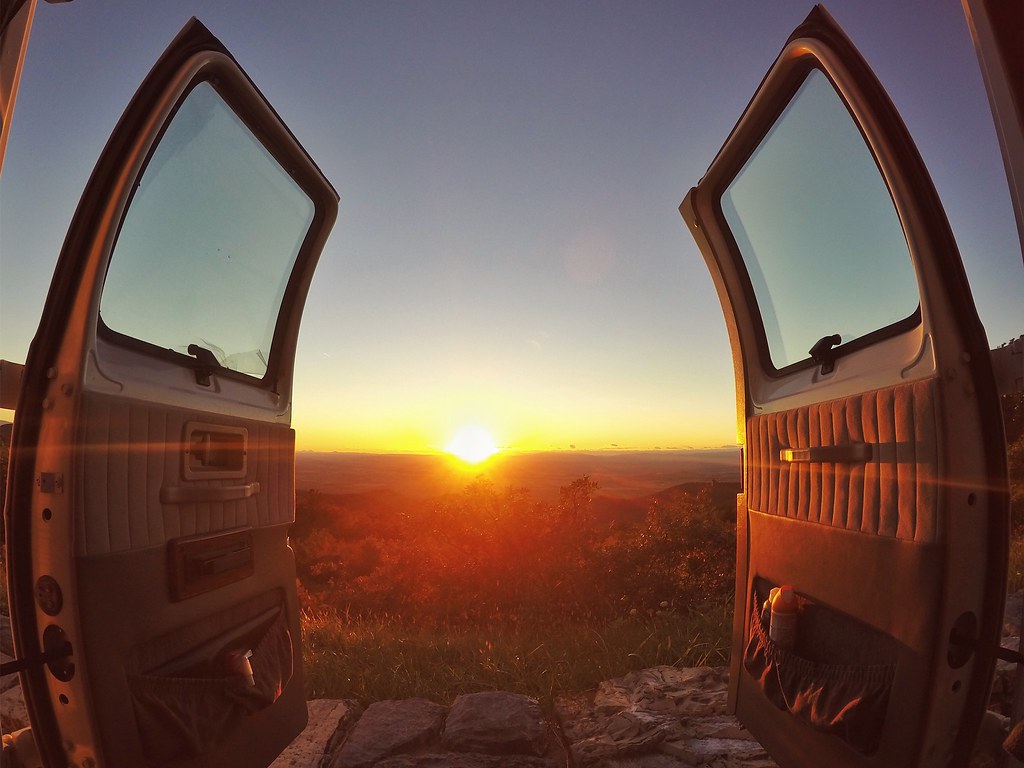 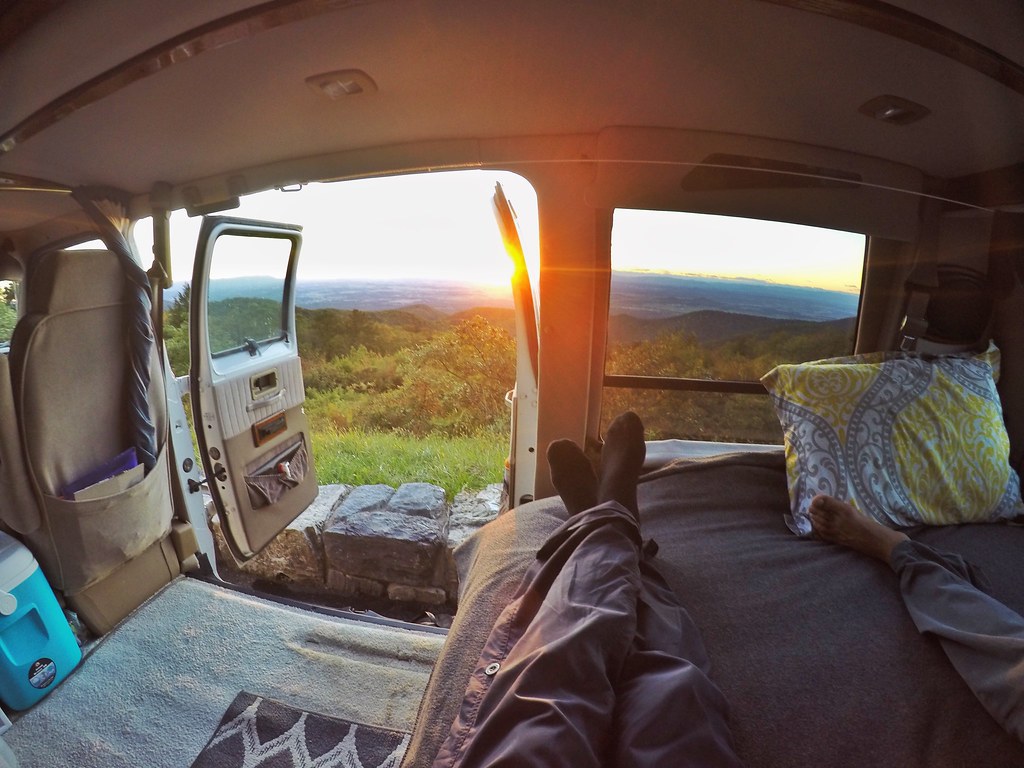 The next day we joined onto the Appalachian trail to hike up to McAfee Knob which is said to be the most photographed spot in all 2200 miles of the Appalachian trail. It was a fairly easy climb up but became steeper at the top and landed us on a rocky outcrop. A big overhang of rock was the reason we were here, it really reminded us of the awesome vantage points in Norway. We both braved a sit on the edge and Craig wandered off to find a place to eat our lunch. He called me over to say he found a nice spot and I found him casually smiling with his legs hanging above an abyss – no way was I eating lunch there! We enjoyed the scenic view of lush green forested hills that rolled into a valley dotted with farmers fields. The walk back seemed to take forever and I was probably dragging my feet because I clumsily stepped on a rock that rolled under my foot like a cricket ball would. Before I knew it I was flying forward and couldn’t stop myself, my sunglasses projected towards space while I stumbled into a muddy pit of shame. Craig did the usual; helped me up, checked I hadn’t broken anything and let out a roar of laughter. I tried to join in, it was pretty funny but I was in pain and my shin and arm were badly bruised. 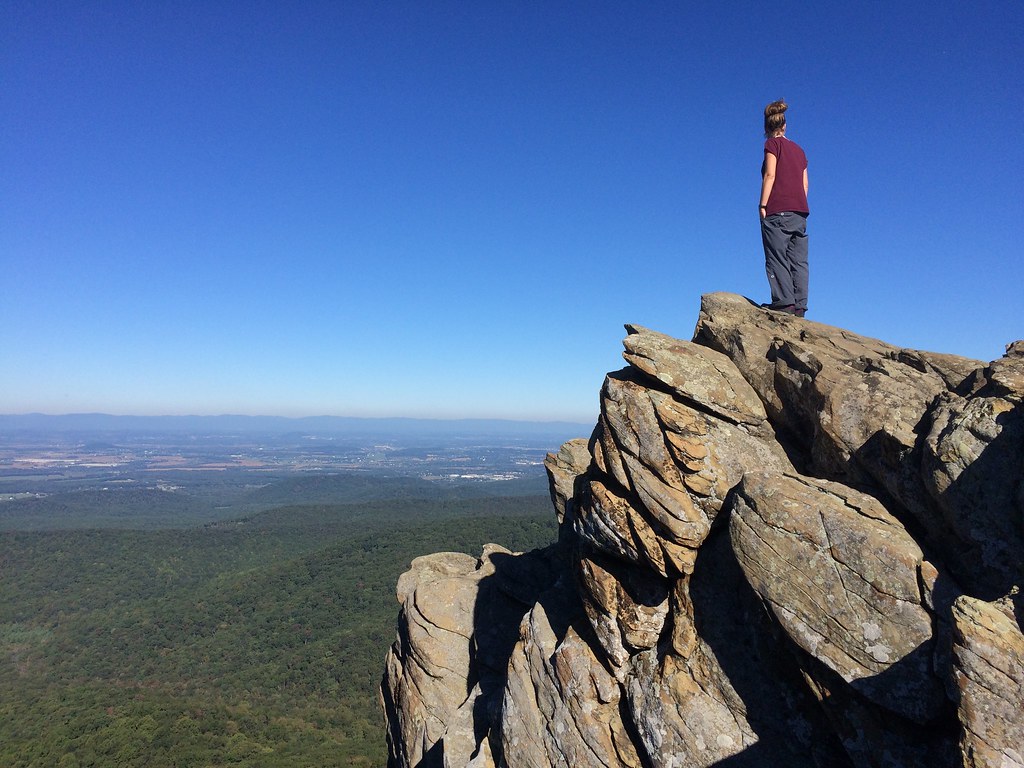 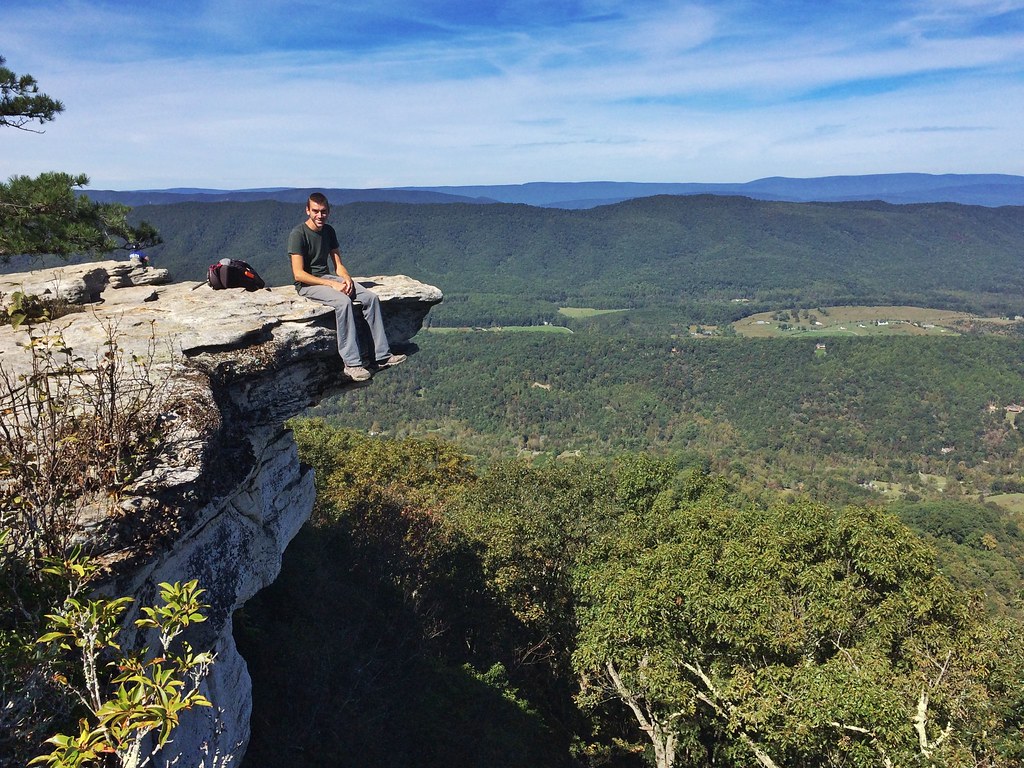 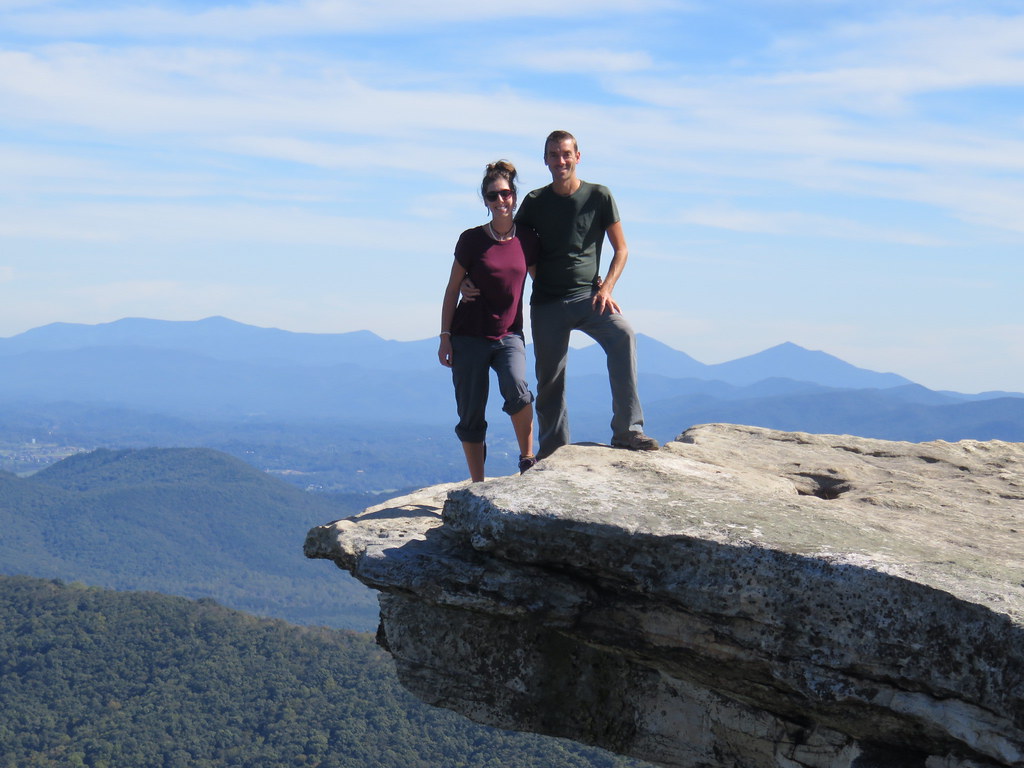 We were happy to wake to yet another stunning day in the mountains and headed to a small village called Floyd where we treated ourselves to lunch in the country store and listened to Appalachian music in the background which was delightful. We joined onto the Blue Ridge Parkway which goes roughly 460 miles south west till it terminates at the Smoky Mountains. We did a couple of hikes up rocky bluffs and then headed to Mabry Mill. The mill was still being used today with the wheel collecting water and cranking down to grind corn. The rustic building reflected perfectly in the still pond. A ranger was showing how woven baskets would of been made and it was only at this point that we noticed the American accent has drastically changed. I always associated Alaaabaaamaaa having strong accent but for some reason I didn’t expect the surrounding states to, which was silly of me. I could barely understand the couple chatting to the ranger, words were cut short and the twang was so strong that we just smiled and nodded. 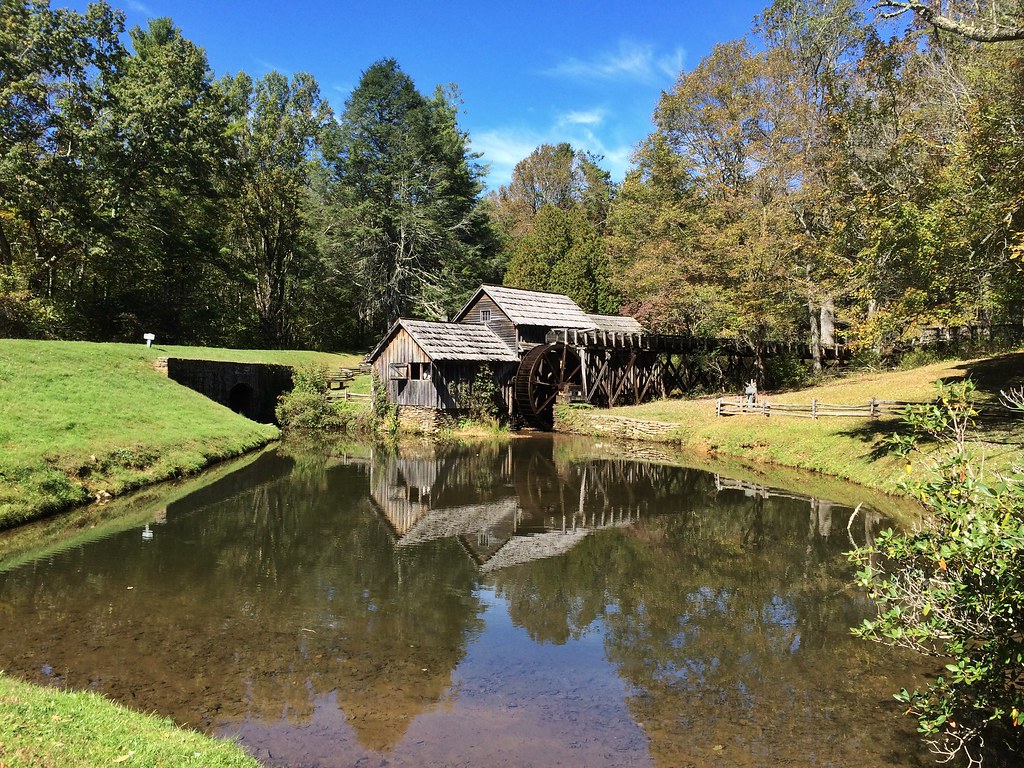 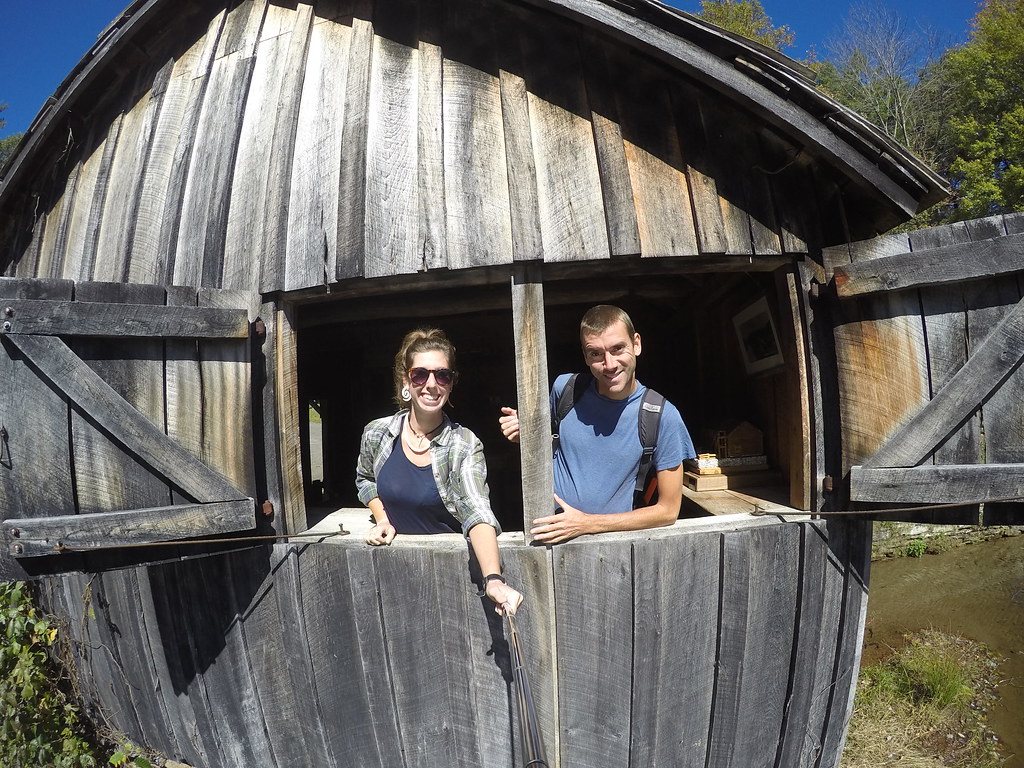 That night we enjoyed our first EVER campfire dinner. It was a total experiment but we lathered potatoes and garlic in oil and seasoning and did the same with peppers and onion, wrapping both in tin foil packets and putting corn on the cob straight on the grill. We couldn’t believe how perfectly everything cooked; we had char-grilled peppers that the Mediterraneans would be proud of and roasted spuds that excelled our expectations. 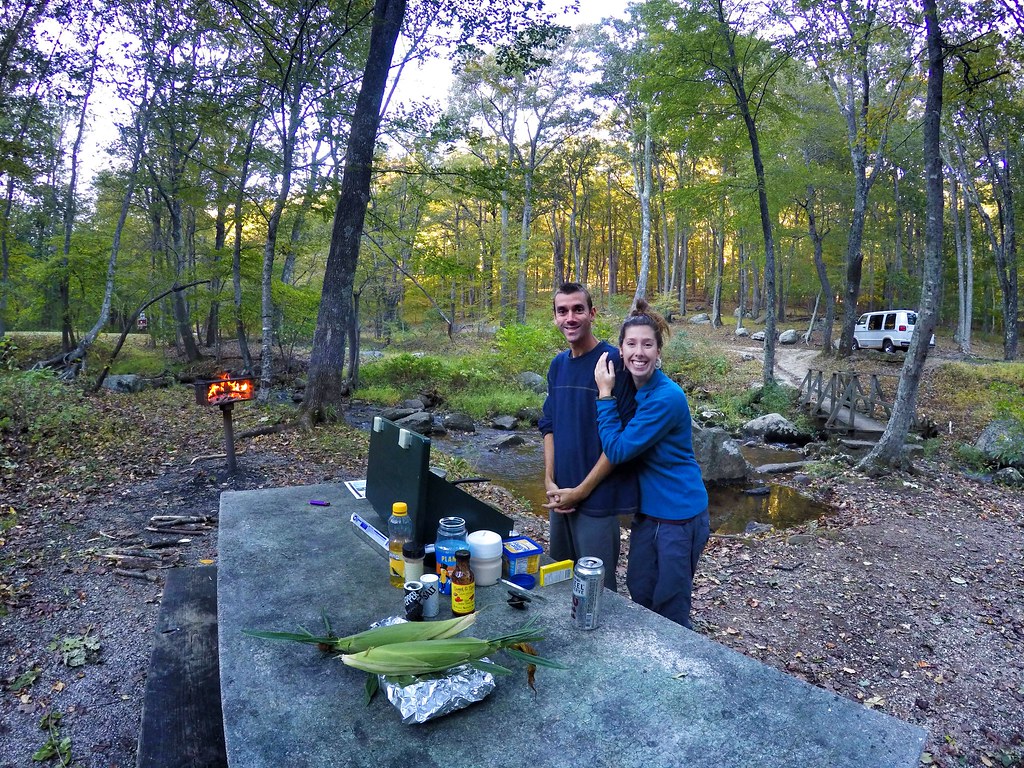 Further along the scenic road was the Blue Ridge Music Centre which, much to my excitement, had live music. We stepped into the room where a sweet old couple were playing a wonderful song using a guitar and a dobro which is a Hawaiian inspired guitar with a metal sort of speaker built inside. The lady used metal finger tips to pluck the chords and a sort of metal bar to glide along the frets which gave it a distinct Hawaiian twang. We took a seat and when they finished that song they asked where we were from, as they did for any new arrivals. We said England and they said England had been well represented today. So I said “ah we should of said another country” Craig looked at me as if to say ‘that was a shit joke Lauren’ the room fell silent, and then a faint laughter began, followed by another one. It was bizarre as it seemed to be contagious and new people kept joining in laughing. An old man in front of me slowly turned his head like an owl and laughed a very low, grumbly laugh like it was his last breath. Craig couldn’t believe my pathetic comedian skills had worked a charm, neither could I to be fair. 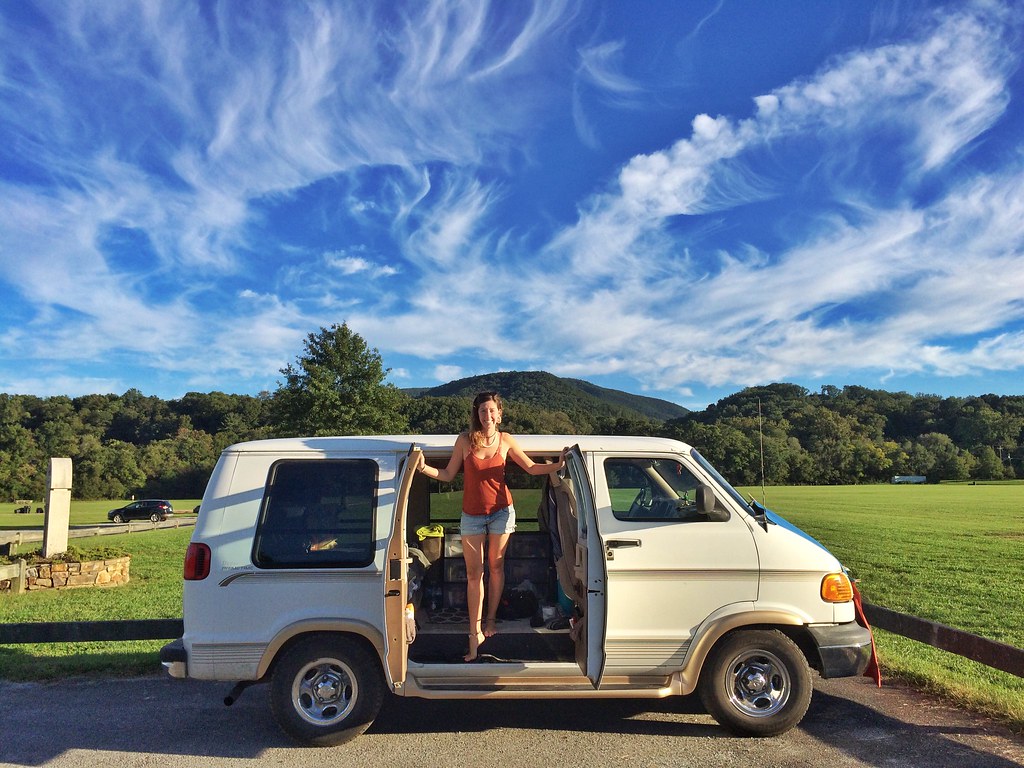